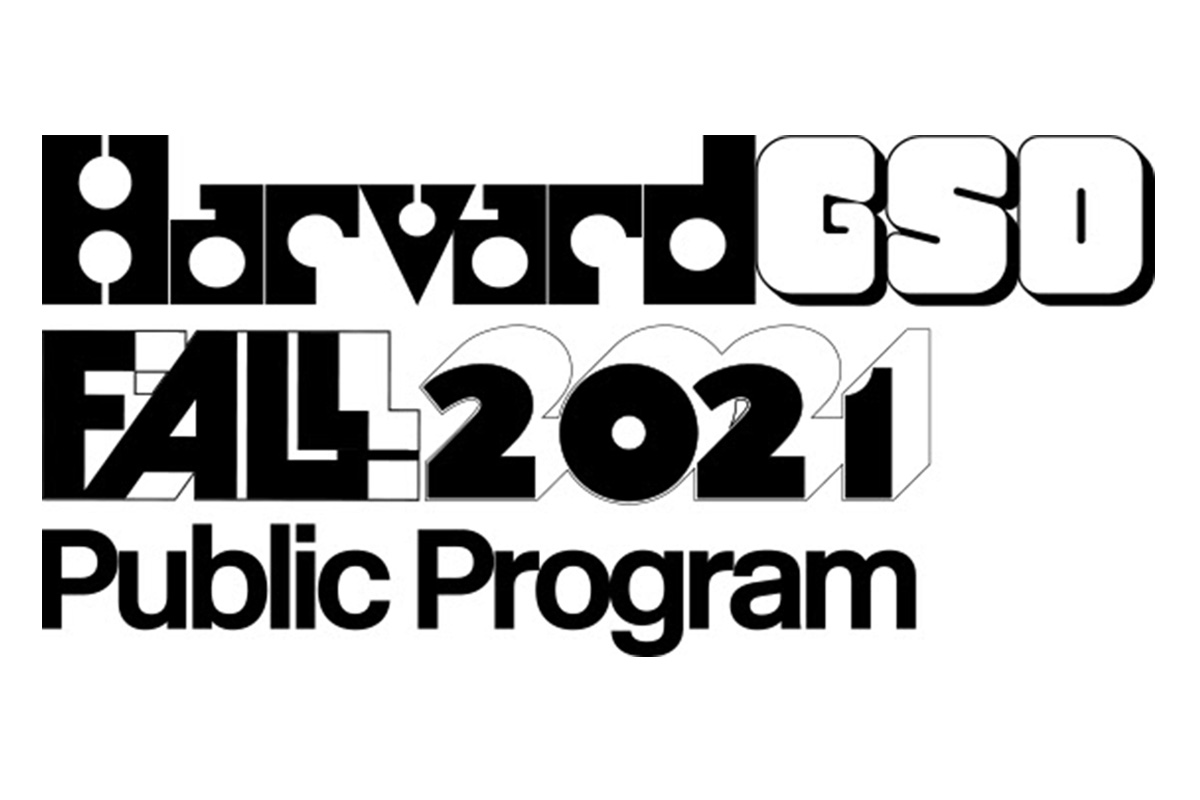 The Harvard Graduate School of Design (GSD) has announced its fall 2021 public programs. All programs will take place virtually and require registration. You can visit Harvard GSD's Events page for more information.

Live captioning will be available. Anyone requiring accessibility accommodations should contact the Public Programs Office at [email protected].

Scroll down to see all public programs by Harvard GSD:

This summit brings together a roster of global leaders to share their work and vision at the intersection of health, climate change, and equity.

Presenting tools for designers and planners to measure the sustainability and resilience of infrastructure, Pollalis discusses case studies in urban infrastructure projects in landscape, water, and transportation, as well as planning for the Allston campus for Harvard and other examples of city planning.

Betts presents an excerpt of the solo show that he is developing based on Felon, his latest collection of poetry. The work engages with the contemporary moment, mass incarceration, and the challenges of having a complicated conversation about crime, punishment, and sorrow in contemporary America.

Friday, October 8 through Sunday, October 10
Black in Design 2021
“Black Matter: Celebrating Black Spatial Practices from the Magical to the Mundane,” with keynote addresses by Lesley Lokko and Mpho Matsipa

“Black Matter” celebrates the cultivation of Black design and creativity from the magical to the mundane, aiming to lift up Black spatial practices and experiences that operate below the surface of design discourse, bringing nuance to the trope of Black excellence, and acknowledging the urgent political, spatial, and ecological crises facing Black communities across the diaspora. This year's conference hosts discussions, exhibitions, and performances at the intersections of technology, history, and design as a form of magic in bringing about equity for Black diasporic communities.

Leonard presents in-progress work Al Rio/To the River—a large-scale photographic project centered on the Rio Grande/Rio Bravo, in particular the 1,200-mile section of the river that is used to demarcate the international boundary between Mexico and the United States—and engages in conversation about the project with curator Esparza Chong Cuy.

Kincaid is a widely acclaimed and fiercely original writer known for her novels, short stories, and essays, including writings on her life as a gardener. She was also staff writer for the New Yorker from 1973 to 1996 and has been a contributor for the Village Voice.

Kake (Ngāpuhi, Te Arawa, Te Whakatōhea) leads a small team at Matakohe Architecture + Urbanism, a kaupapa Māori design studio based in Whangārei in the Te Tai Tokerau region of Aotearoa, New Zealand. Her talk presents a number of recent projects, and reflects on the philosophy behind Matakohe and their approach to practice.

Christ & Gantenbein’s activity extends to a broad spectrum of projects—private and public commissions, ranging from small transformations, to housing, office buildings, bridges, and urban master plans. OFFICE is renowned for its idiosyncratic architecture; its projects are direct, spatial, and firmly rooted in architectural theory, and the firm reduces architecture to its very essence and most original form: a limited set of basic geometric rules is used to create a framework within which life unfolds out in all its complexity. Kuo is Assistant Professor in Practice at Harvard GSD and founding partner of KARAMUK KUO; the work of the office focuses on the intersection of spatial concepts and constructive technologies, recognizing architecture as a social and material discipline.

Thursday, October 21
Jane Bennett, “Out for a Walk in the Middle Voice”

Bennett, the Andrew W. Mellon Professor of the Humanities at Johns Hopkins University, muses on two strolls—one by the 19th-century naturalist Henry Thoreau, one by Paul Klee's graphic line as it enlists the energies of a human hand to become a doodle—and takes up the radical entanglement of human and nonhuman activities, gesturing toward a lexicon able to acknowledge such a trans-specied kind of agency.

Bleichmar is Professor of Art History and History at the University of Southern California. Her research and teaching address the history of images, objects, and texts in colonial Latin America and early modern Europe, focusing on the histories of science and knowledge production, cultural encounters and exchanges, collecting, and books.

The 49th issue of Harvard Design Magazine addresses "the status of the public" in political and social discourse, in design thinking and practice, and in the built environment itself. Leading public intellectuals, scholars, and practitioners ponder the fate of the public in a world where xenophobic thinking and challenges to collective responsibility are becoming ever more dominant.

Klinenberg claims that “social infrastructure,” which he defines as the physical spaces that shape our interactions, plays an essential but unappreciated role in modern societies, generating inequalities in health, education, crime, climate vulnerability, and social networks. In this lecture, he shares key findings from his landmark book, Palaces for the People, and offers a blueprint for rebuilding in this moment of crisis.

This conference brings together scholars whose research investigates the relationship between the African diaspora, Afro-descendants, and the built environment of North America and the Caribbean from a variety of lenses that are specific to the scholars’ fields of inquiry. The goal is to begin to expand the field of landscape history by taking into consideration questions that are not always deemed central to the practice of design, if design is understood as an activity that has featured—in the historical narratives—the presence of an author-designer, a client, and a variety of tools the former has used to communicate ideas about form, materials, and use to the latter.

Culinary historian Twitty, author of the James Beard-winning book, The Cooking Gene, discusses the impact of the collective perceptions of African American foodways on how we experience a broader vision of healing. With such foodways often stigmatized as a continuation of socio-cultural trauma or defended with a mark of “authentic” racial identity, Twitty offers alternative ways to see how the revitalization of ancestral foodways and culinary justice is a necessary part of our collective national experience.

Through stories behind six recent cultural projects from the studio, Hu and Wenjing, Founding Partners of OPEN, discuss the changing role and opportunity for architects in a transformative society, and the importance of being radical yet poetic at the same time.

Heralding the exhibition “Interrogative Design: Selected Works of Krzysztof Wodiczko,” the artist joins architectural historian and GSD professor Erika Naginski for an exploration of architecture’s role in the construction and performance of memory (12pm) and art historian Rosalyn Deutsche to discuss the role of trauma, healing, and survival in his work over the last five decades (2:30pm).

Monday, November 15
Wheelwright Prize Lecture
Aude-Line Dulière, “The Turn of the Screw and Other Short Stories on Dismantling and Reuse”

Dulière, winner of Harvard GSD’s 2018 Wheelwright Prize, presents the conclusion of her research proposal, offering a collection of stories on the use and reuse of materials across building sites, demolition sites, salvage yards, quarries, film sets, and other out-of-the-way locations.