Interior designer Ewelina Makosa and designer Jan Garncarek have transformed an old warehouse of an old factory into their art studio with raw interiors and colorful furniture pieces in Berlin, Germany.

Named Ewelina Art Studio, the 94-square-metre studio carries the traces of history within the structure with 5-metre tall rooms and industrial materials that provide elegant history of its architecture.

In 2017, Ewelina and furniture and lighting designer Jan Garncarek settled in their art studio, the structure was a warehouse of a former factory – most likely a storehouse for airplane parts during World War II. They intended to grow their projects in this redesigned studio. 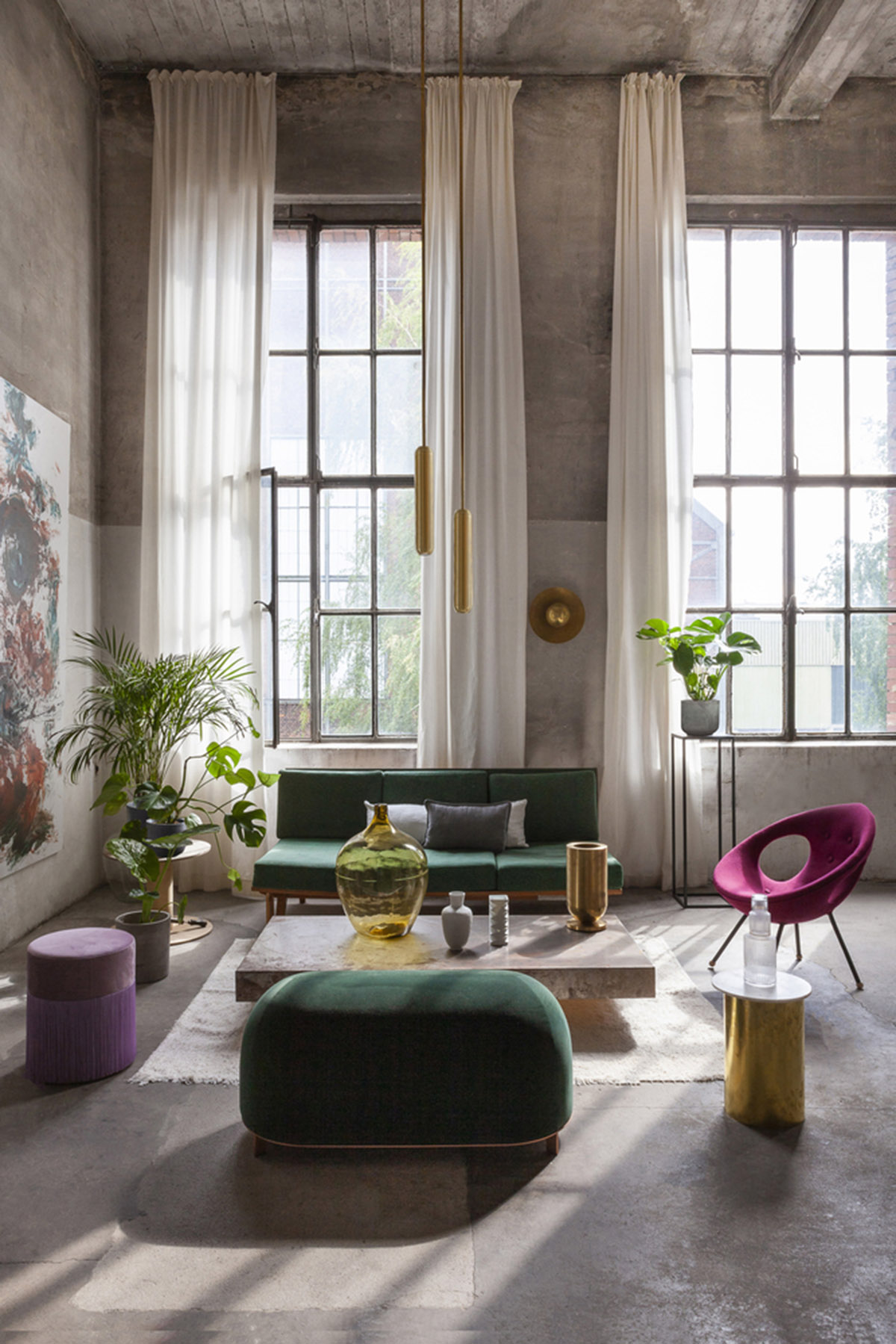 Ewelina and Jan redesigned the structure with light-filled interiors taking inspiration from the timeless formula of pre-war houses, combining it with the character of contemporary interiors.

Color and free-form furniture are the primary elements that dominate the space with modern touch. 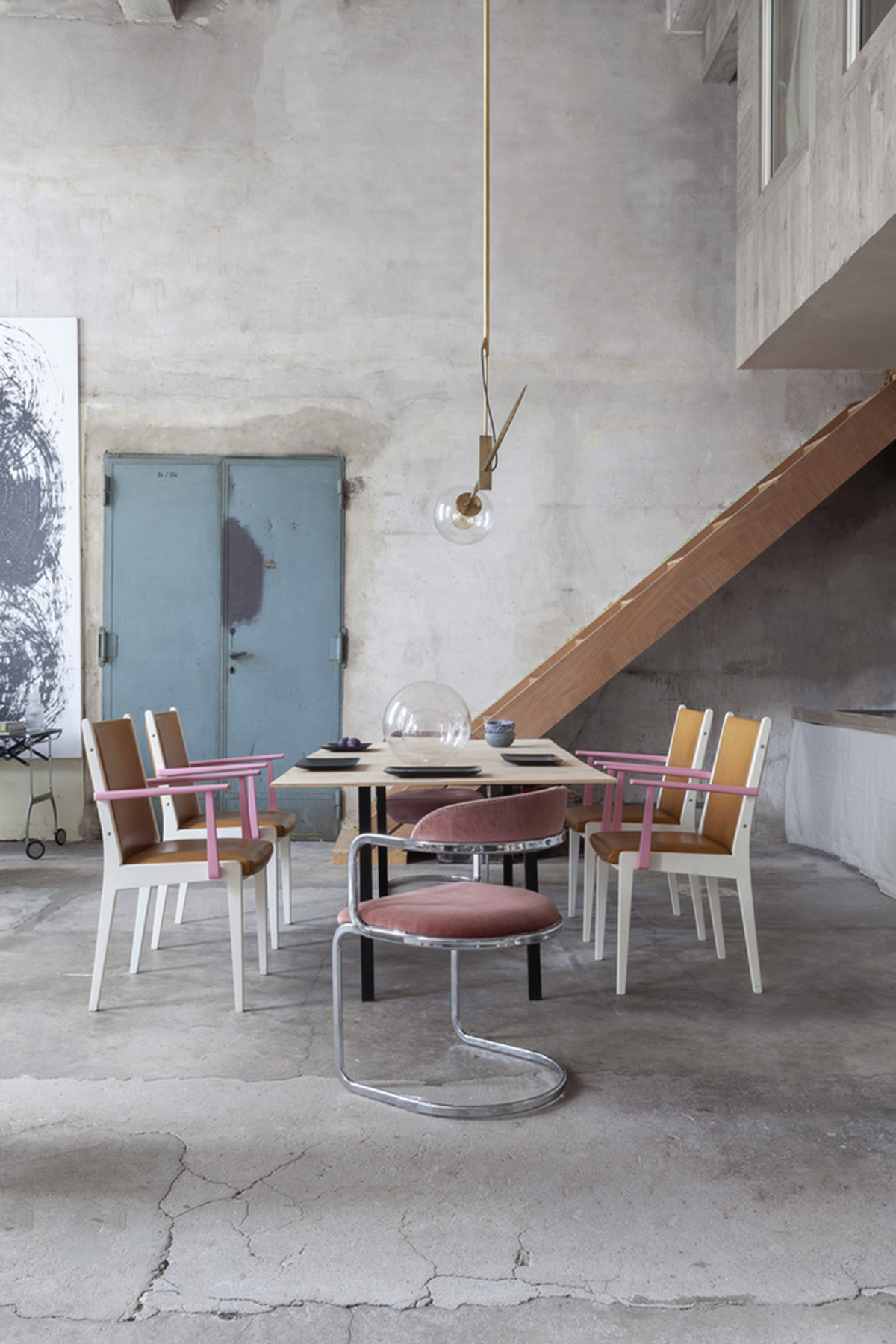 Combining manor houses with working-class housing estates, and industrial locations with idyllic parks and natural lakes, the Berlin district of Reinickendorf is both relaxed and inspiring.

"Life moves at a much slower pace here, compared to Berlin’s city centre," said Ewelina. "The lack of trendy cafes and restaurants provides ideal conditions for genuine contemplation and focus. In addition, the local lake is a great summer destination." 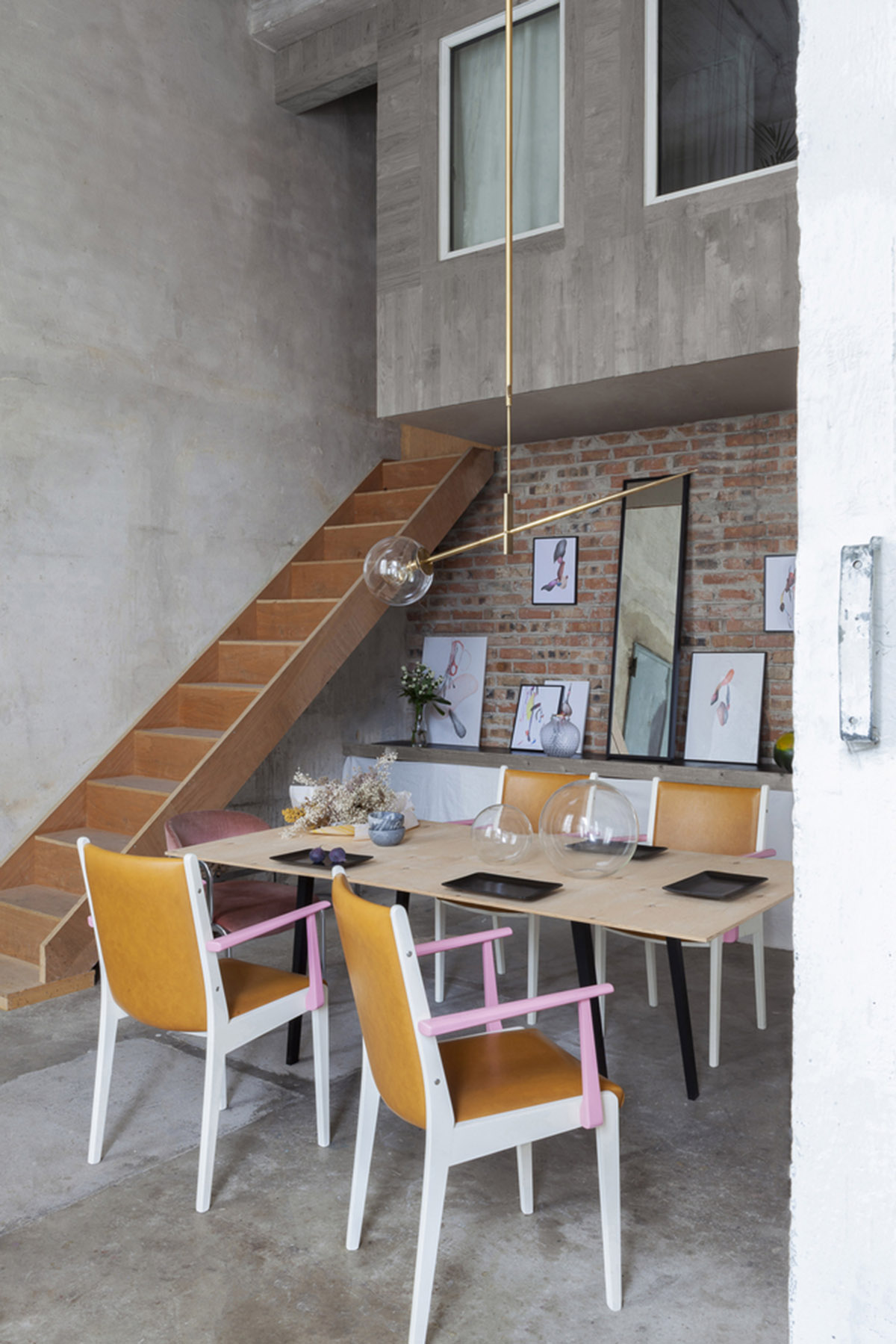 As Ewelina explains, "the building had remained unnoticed until an Irish carpenter leased and renovated the property, sectioning the available space into several artistic workshops."

Ewelina and Jan decided to renovate the structure completely. They aimed to preserve the original walls and floorings: "witnesses of the times when the workstations and machinery were being disassembled." 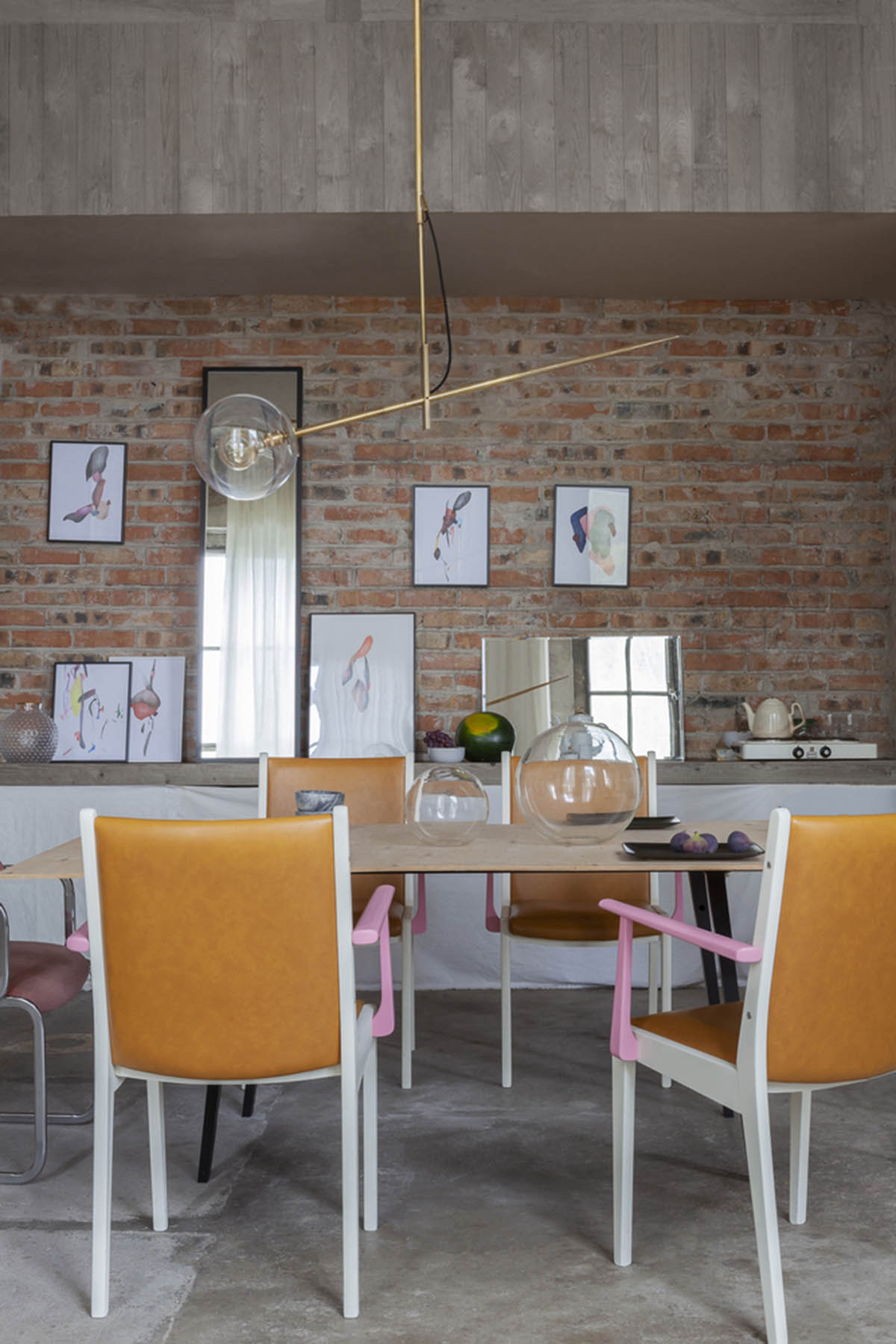 The interiors were designed by Ewelina, and she did not want to remove such traces, quite the contrary – she has allowed them to design the space in their own ways in a vertical space, reaching at 5 meters. A space that is clear and undisturbed by an excess of items. 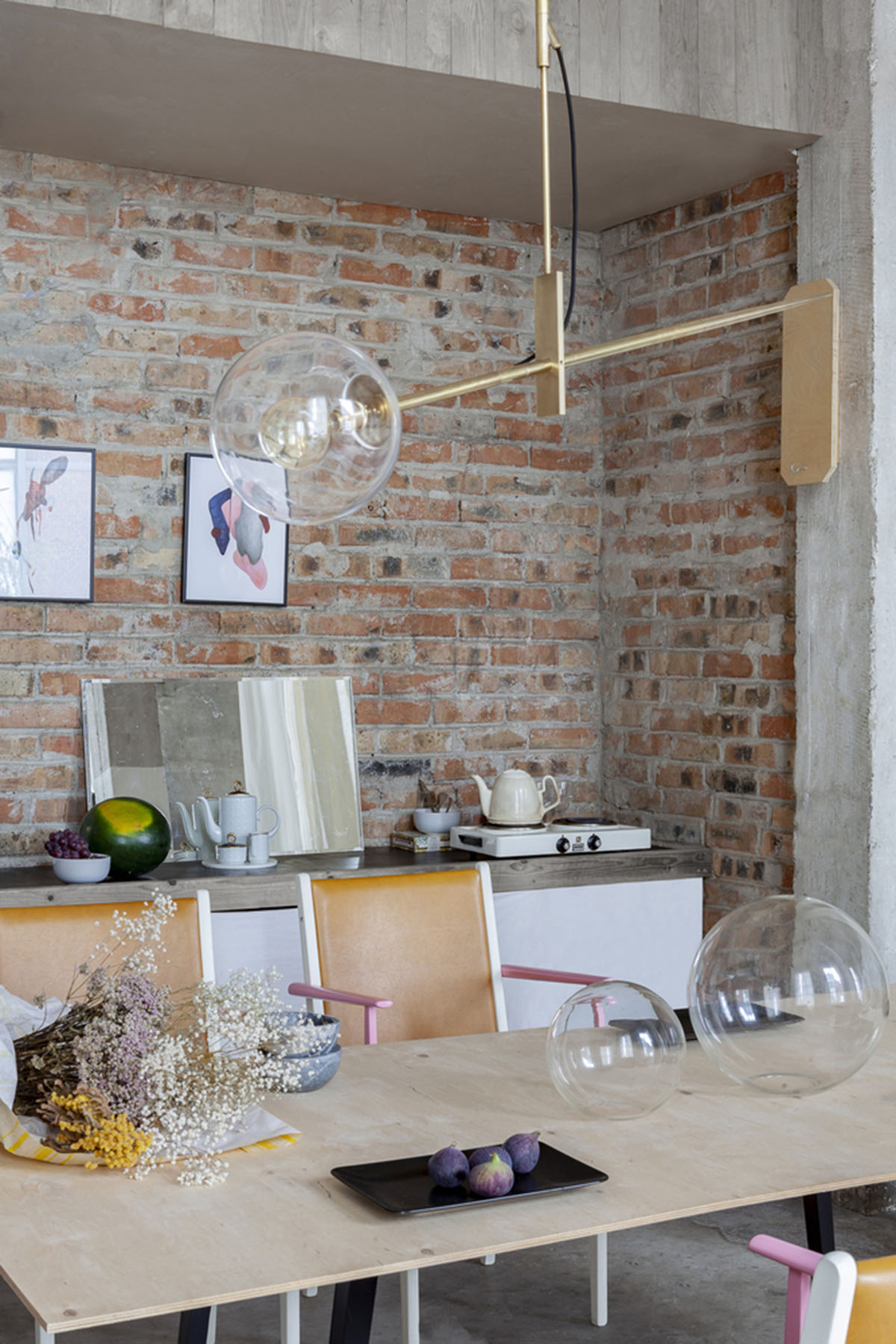 "Searching for traces and remnants of the past as well as studying the broadly understood problem of memory – are all recurring themes developed by Ewelina in her art," stated in a project description.

The building’s space conceals a plethora of traces and imprints of human labor and history, the couple wished to preserve.

Partially painted in white, the dwelling’s exposed concrete structures, imbues the studio with a soothing austerity, enhanced by the large loft windows that bathe the space with an ever-changing peplum of natural light. 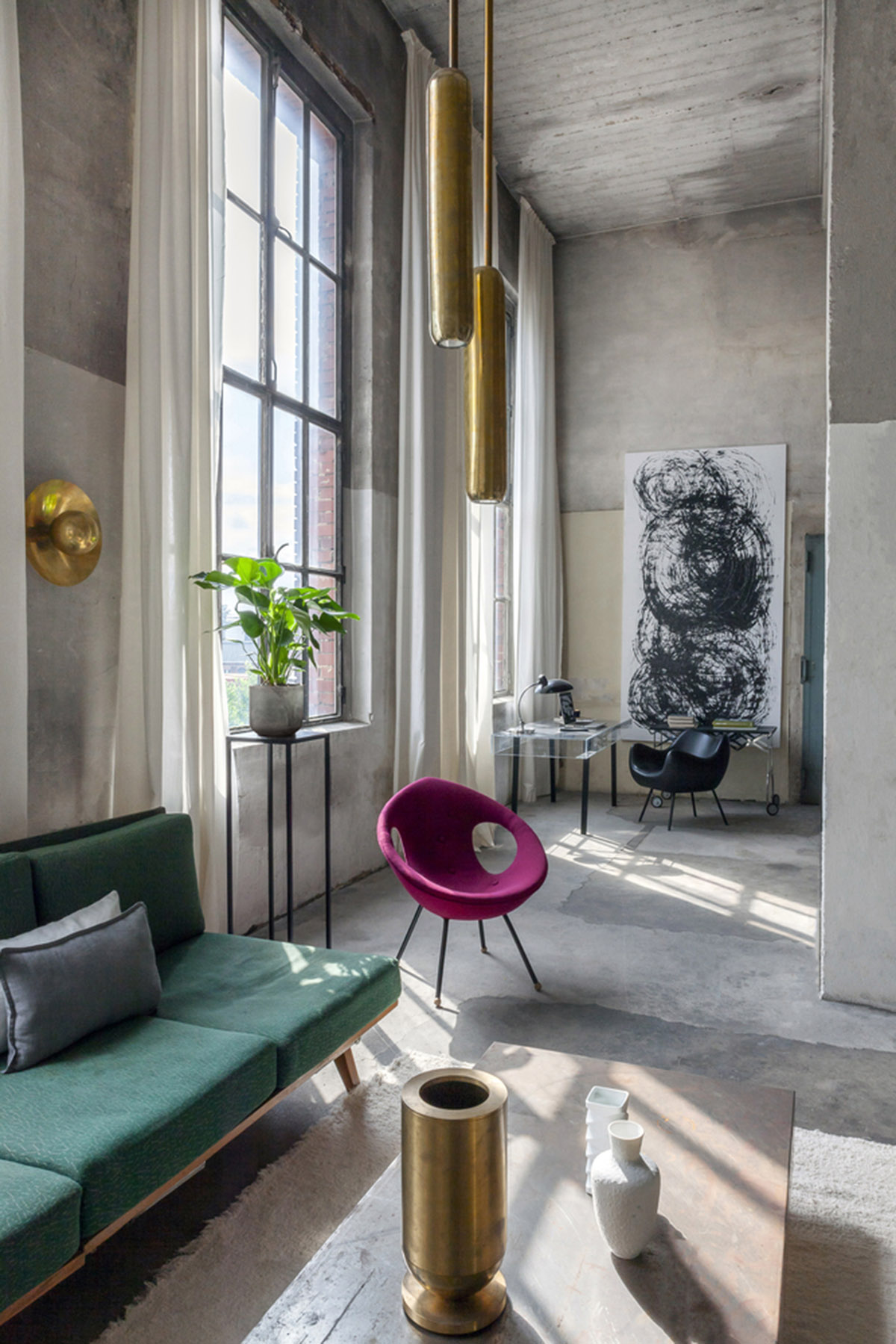 As Ewelina explained, "we did only some basic renovations, mostly ourselves. We loved the raw walls and wanted to keep it as it is, adding some nice furniture."

"In general our space changes constantly, it depends on what art project we are working on at that moment. We also love experimenting in the space when it comes to interior, design, or art. The space itself is an inspiration." The interiors are blessed with ample daylight, tall ceilings, and peaceful surroundings, not to mention a handpicked group of creative neighbors, the property that the Polish couple took over not only made for an inspiring studio but also turned out to be a great place to call home.

"All this makes for a stimulating environment in which diverse projects can be brainstormed and eventually developed in various directions," added Ewelina. 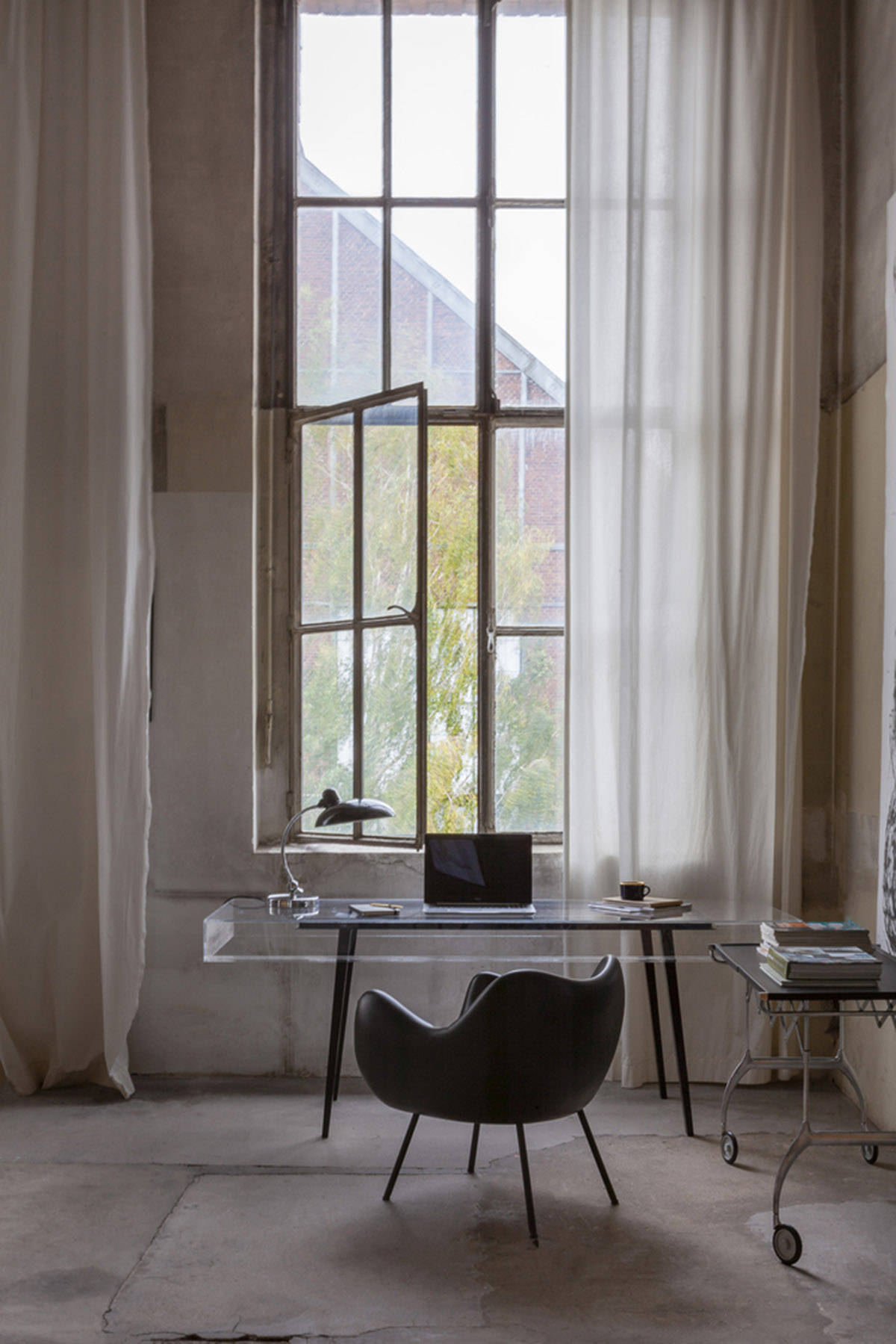 The space features furnished with a selection of Jan’s designs as well as vintage pieces such as the ‘Tatra’ sofa mass-produced in Czechoslovakia in the 1950s.

Predominantly made of brass and channeling a pre-war, Art Deco aesthetic, Jan’s pendant, desk, and wall lamps add accents of opulence and refinement into the studio’s otherwise industrial starkness, while their hand-crafted quality echoes the human labor that once filled the premises. 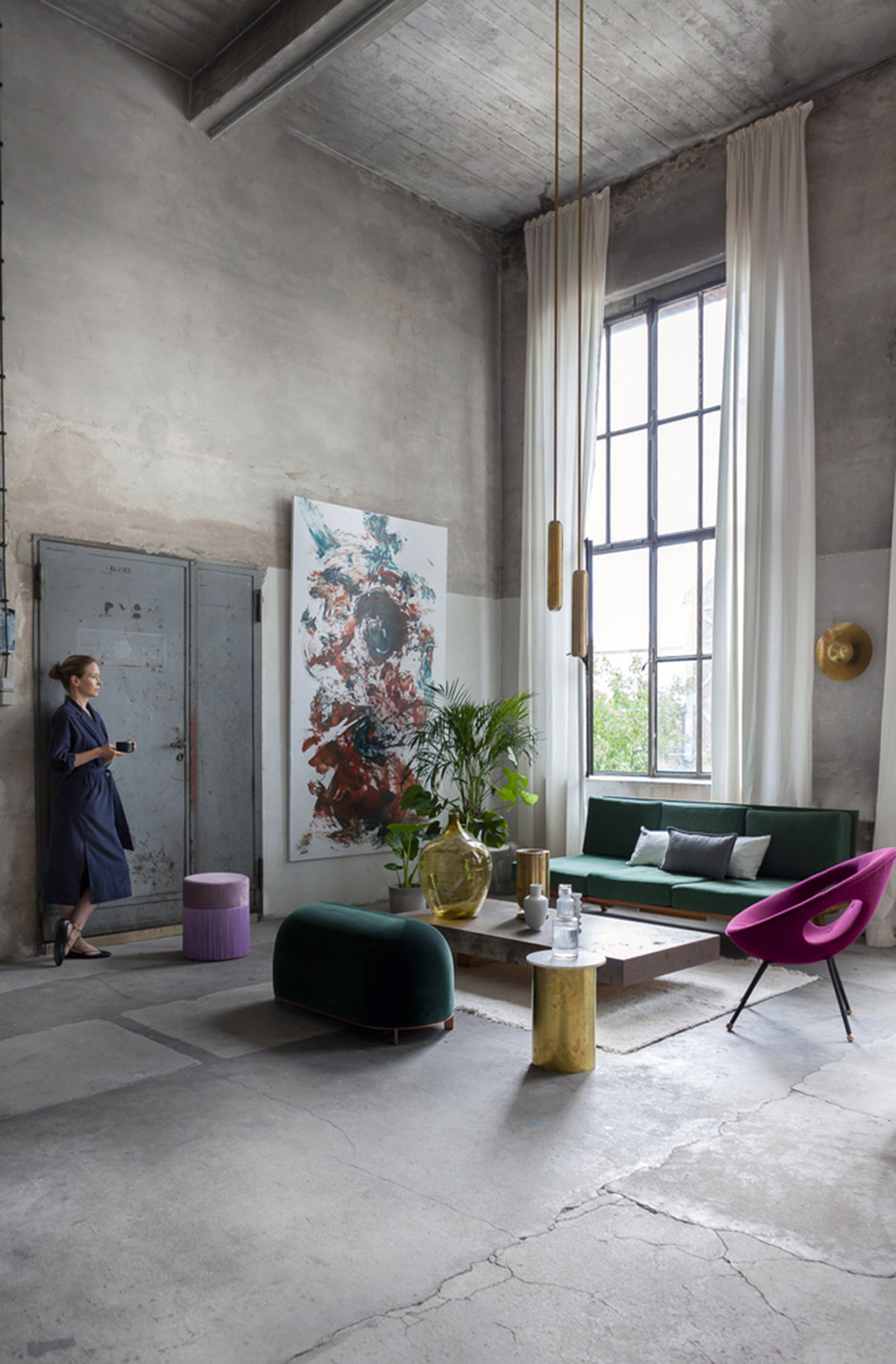 Some of them are still prototypes, like the office glass-desk and the living room coffee table others – such as the “Hasta” lamp ) or the “U2” suspensions lamps– has already acquired the status of desirable and highly acclaimed collectible design pieces under the brand name of Jan Garncarek Design. 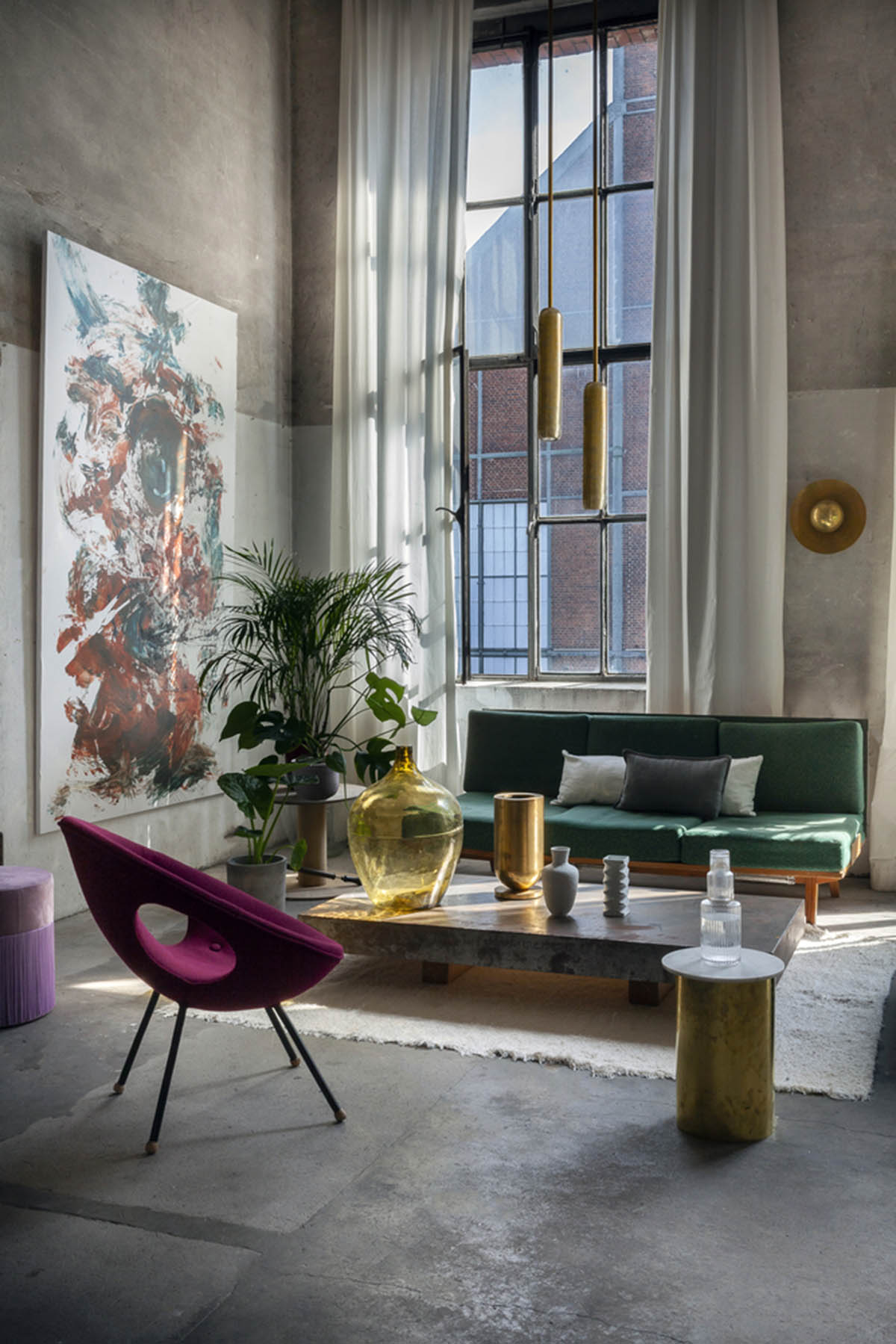 On the mezzanine level, they used hardwood flooring and white curtains that soften the starkness of the exposed concrete surfaces while a free-standing bathtub, cheekily suspended on timber supports, further stokes the dialogue between the hand-crafted and mass-produced that runs through the project – a fitting discourse for a studio housing the practices of both an artist and a designer.

As Ewelina noted, "the loft windows are particularly useful when making large-format paintings." 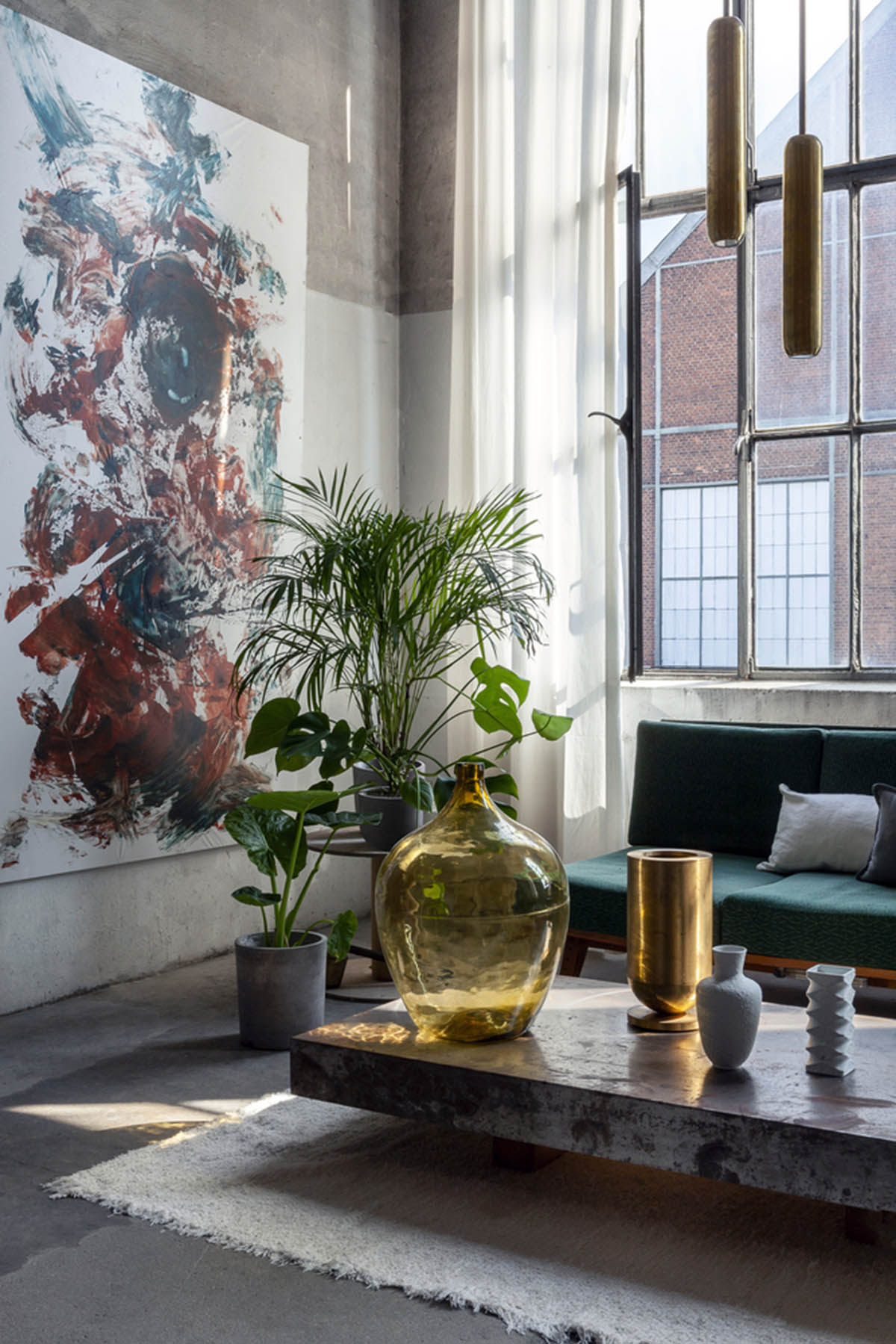 The artist is always amazed by the warm light within the workshop which plays on the warehouse’s surfaces creating an aura of daybreak lucidity or hazy twilight – depending on the time of day and year. 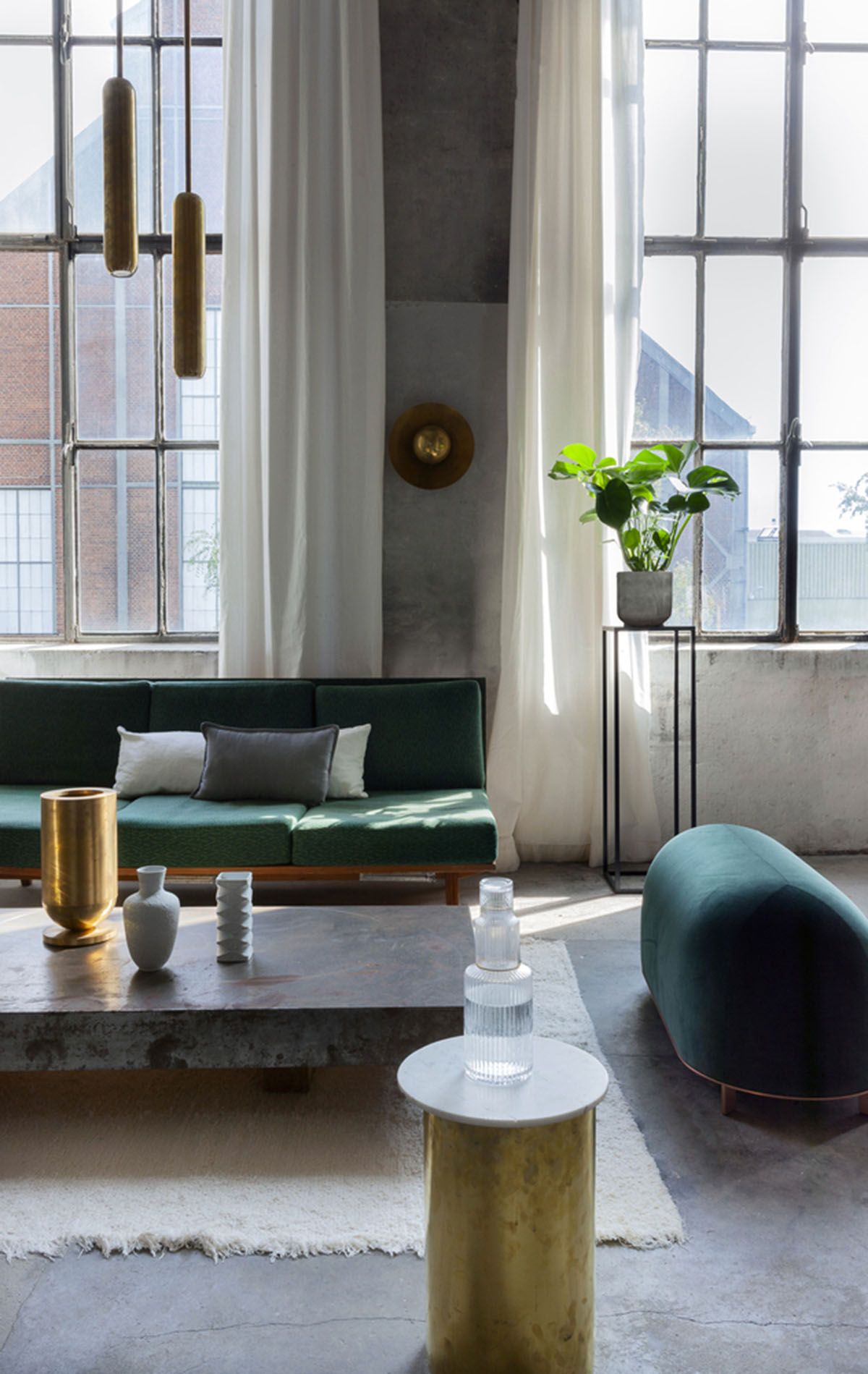 Ewelina added that "the place is like a haven to us. It lets us quiet down and focus, simultaneously providing an inexhaustible source of inspiration." 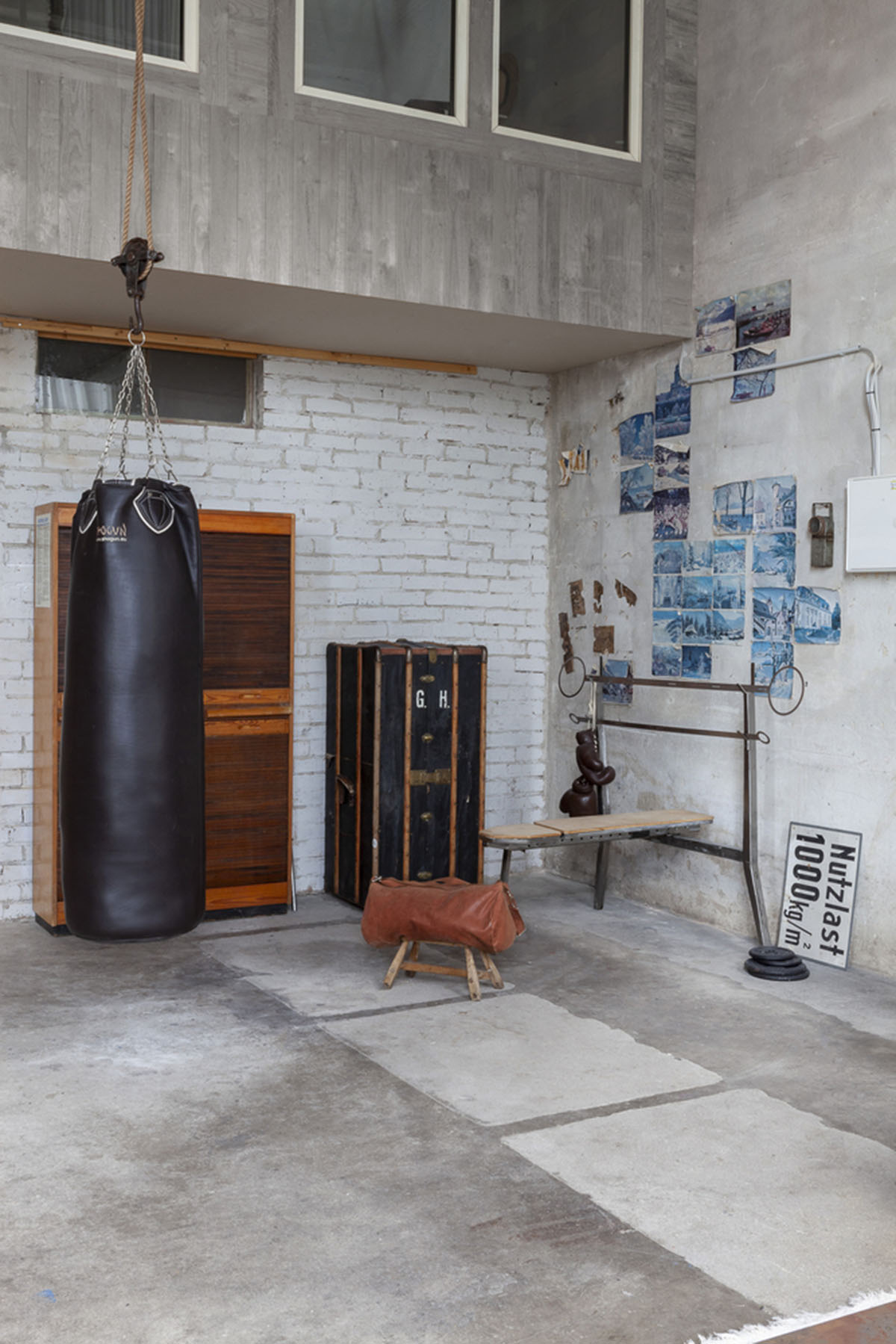 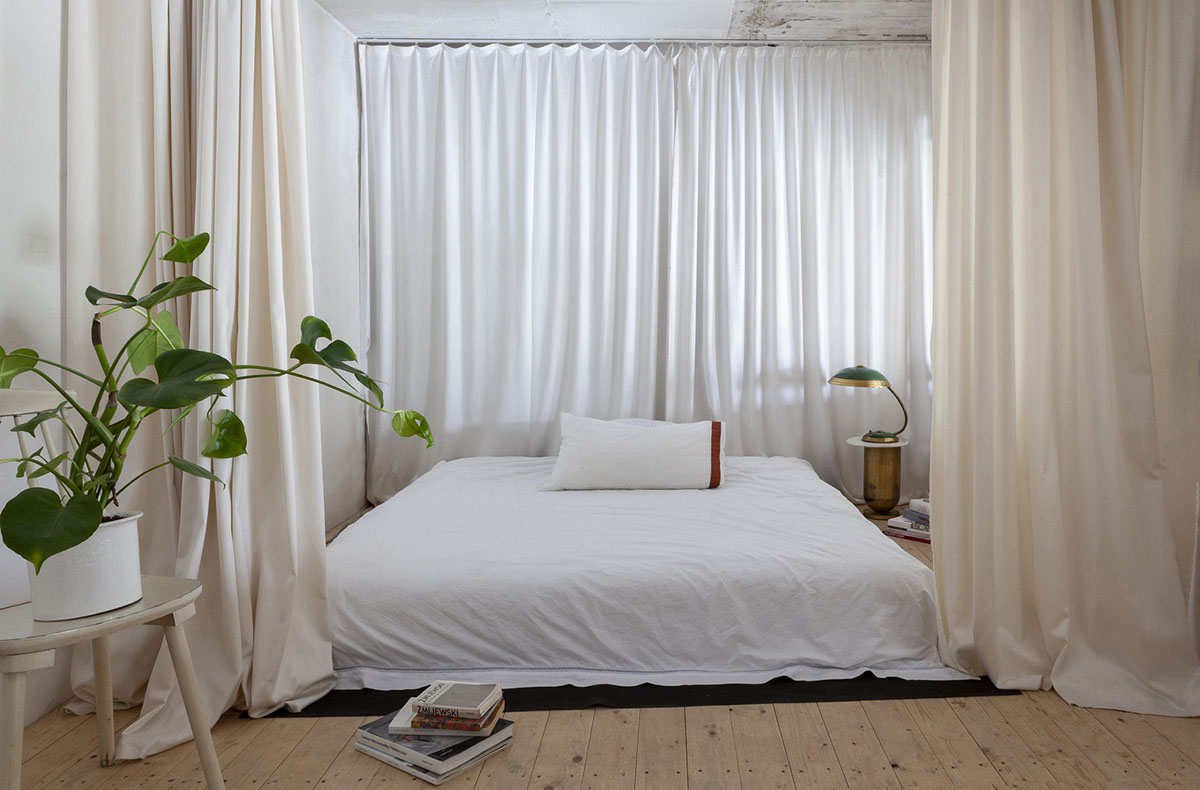 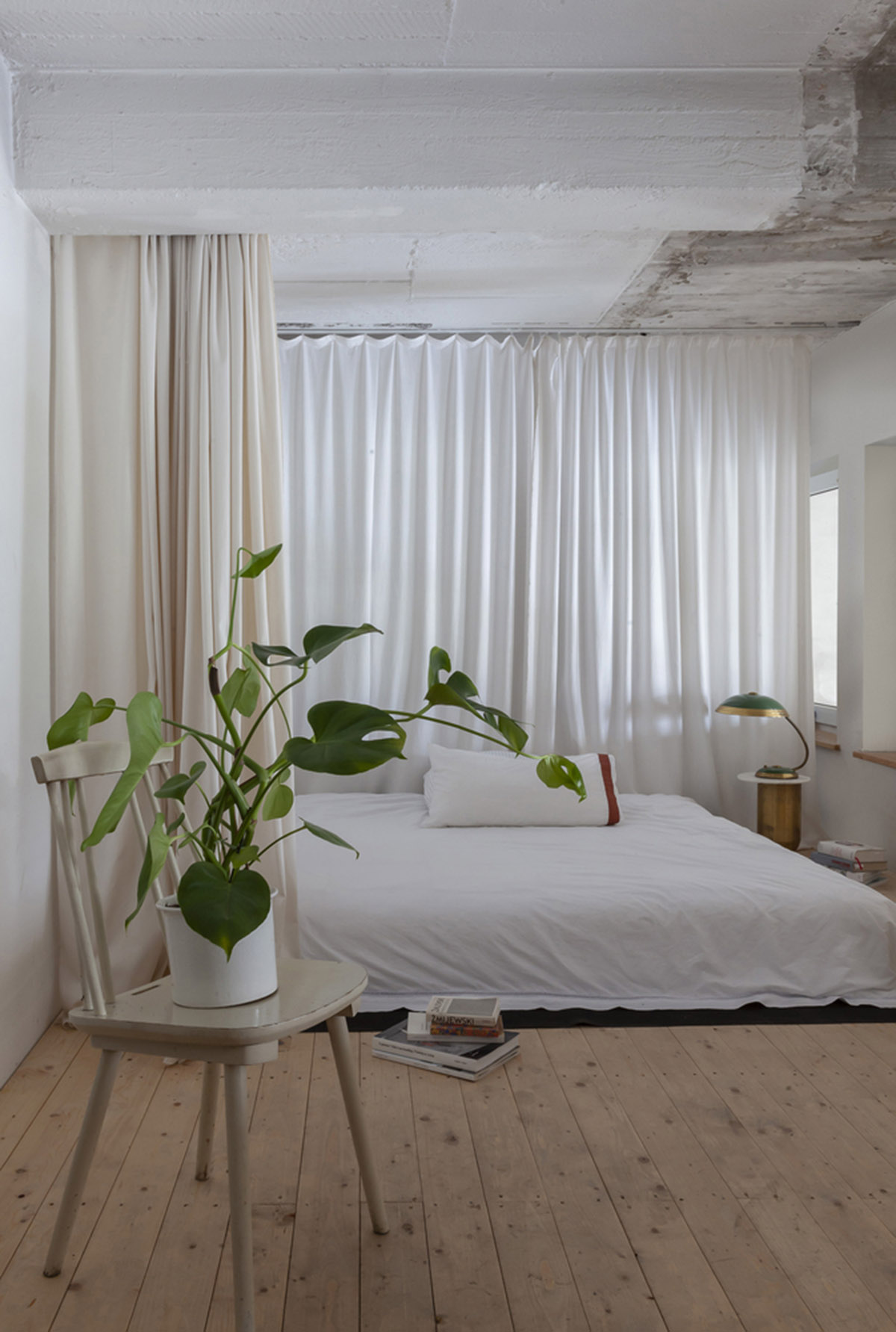 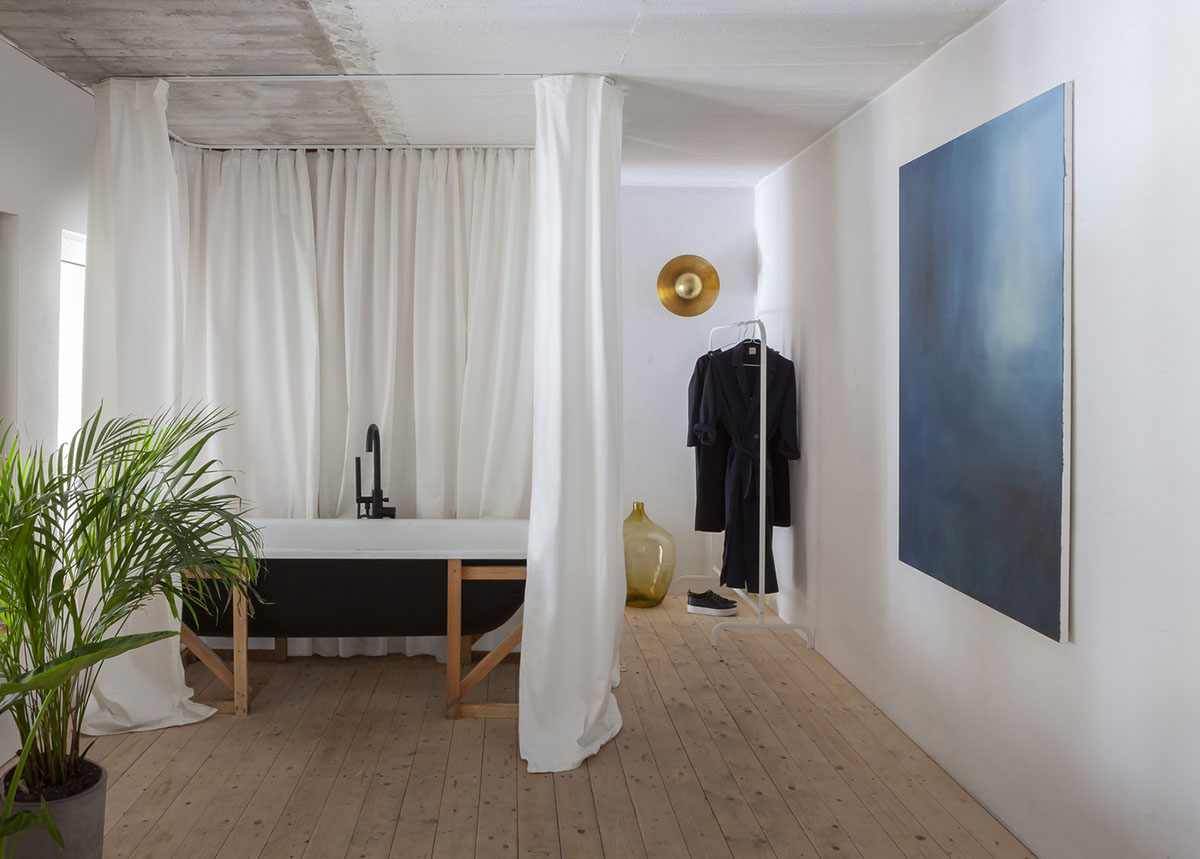 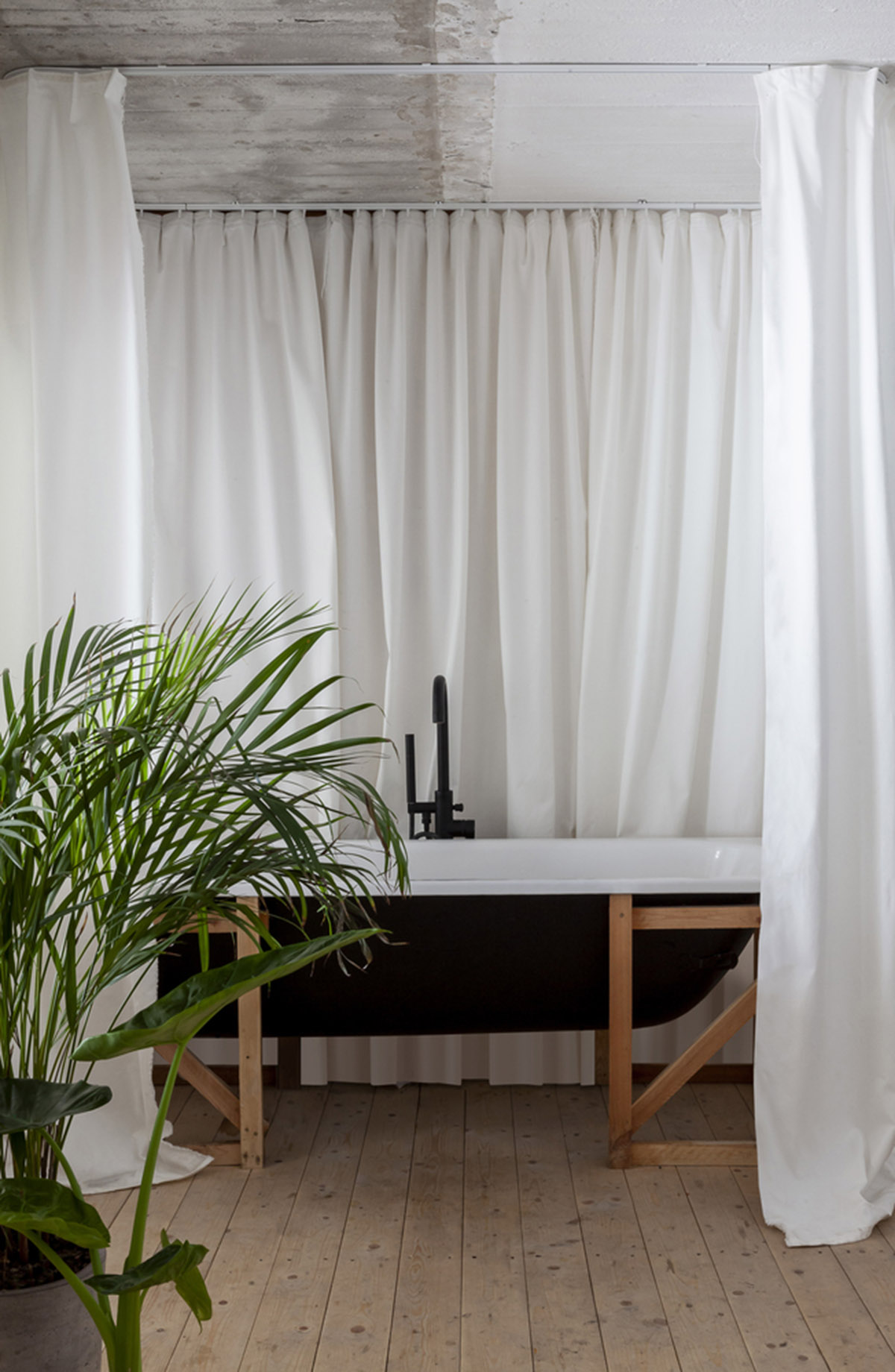 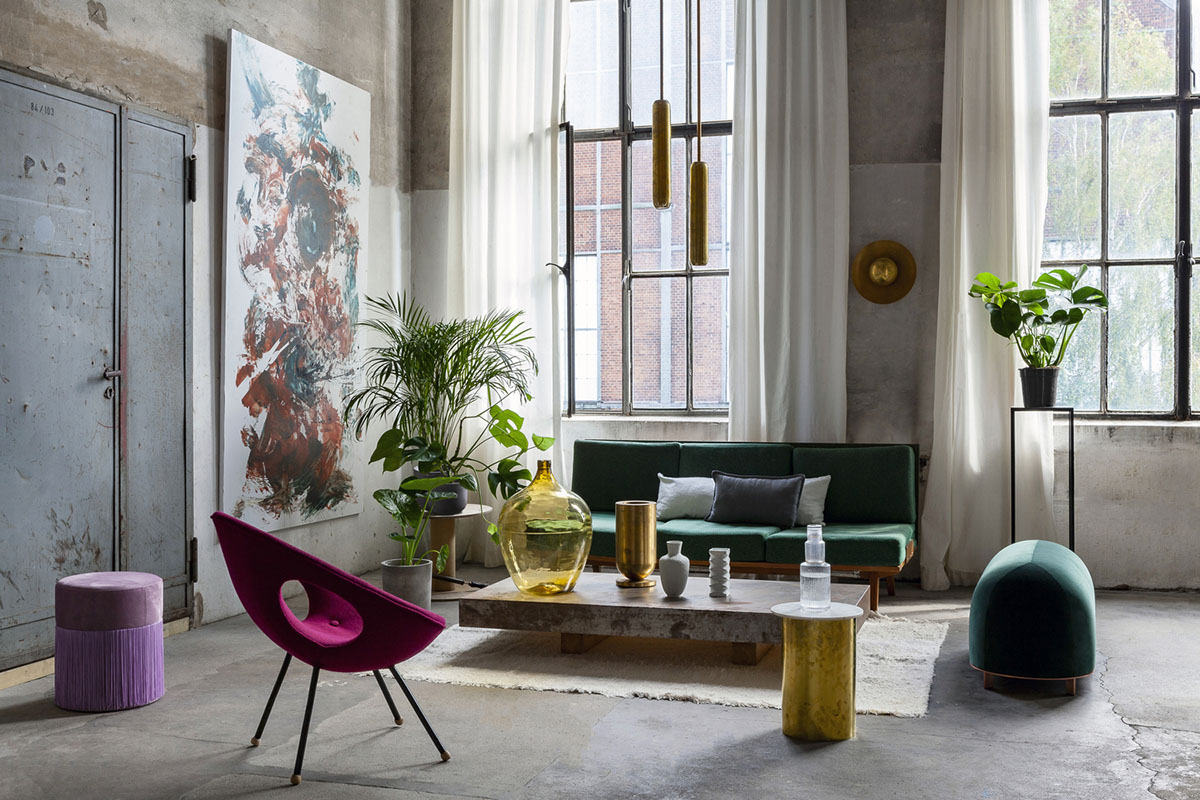 Ewelina Makosa is a visual artist and architect. For the past seven years she has been working as a freelance interior designer – mainly on residential interior design projects. She works and lives in Berlin & Warsaw.