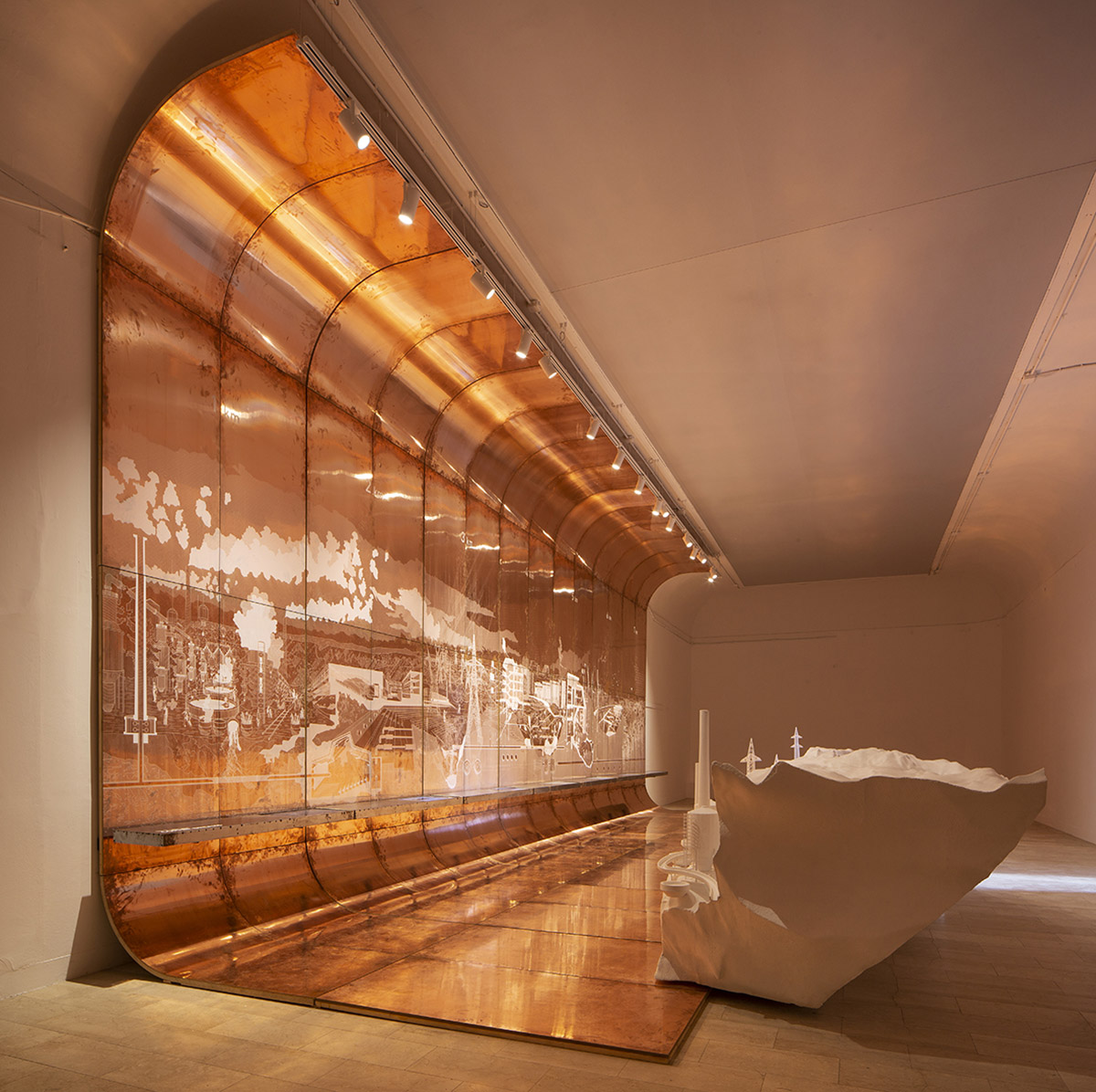 The Serbian Pavilion has used a copper-clad wall to present its exhibition "The 8th Kilometer" at the 2021 Venice Architecture Biennale, Italy.

Curated by a team of eight architects of MuBGD, the golden-looking exhibition looks at the present and the future of industrial towns by taking the town of Bor, a mining town in East Serbia, into the core of the exhibition.

Titled as The 8th Kilometer, the exhibition investigates the town as a case study and delves into how the development of this mining town has impacted its character and urban infrastructure through the "life-work relationship".

Addressing to the town's new socio-economic character, it exhibits how it generated new forms of collectivity and provoked a new relation between one city’s production base and its urban structure. The town of Bor becomes The specific subject of the research that forms the main content of the exhibition in the Pavilion of Serbia. 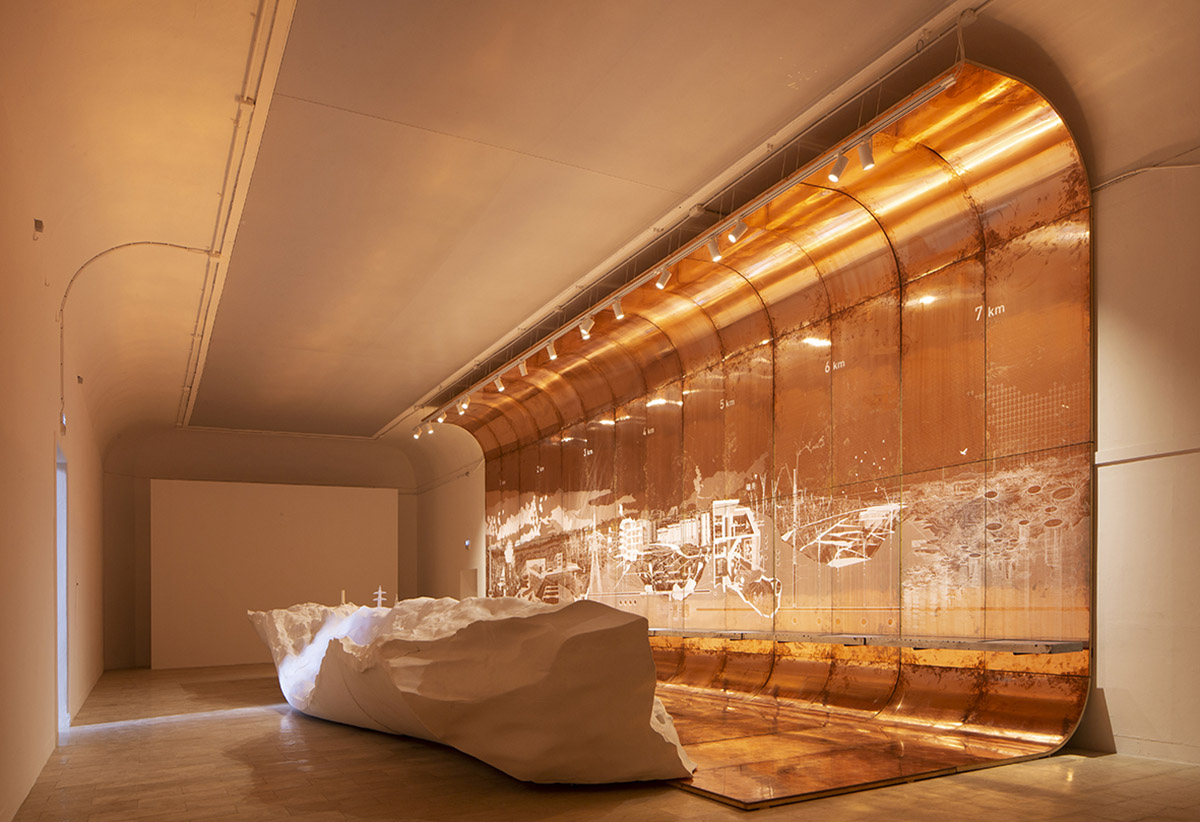 "Geographically positioned within a non-ferrous metal mining basin, this town was urbanistically and architecturally developed during the post-war industrialization period, thus further upgrading its multicultural character previously developed through the town’s core economic activity—mining," said a statement by the Serbian Pavilion.

Based on the authors' observation, the name of the exhibition takes its name from the residents of Bor that they refer to the individual places of the town through a measure of their distance from the Bor open-cast mine, defined as a starting point: “kilometer zero.”

Furthermore, the inhabitants' system of orientation is adopted over the methodology of planning and construction of the town itself by way of seven city kilometers. 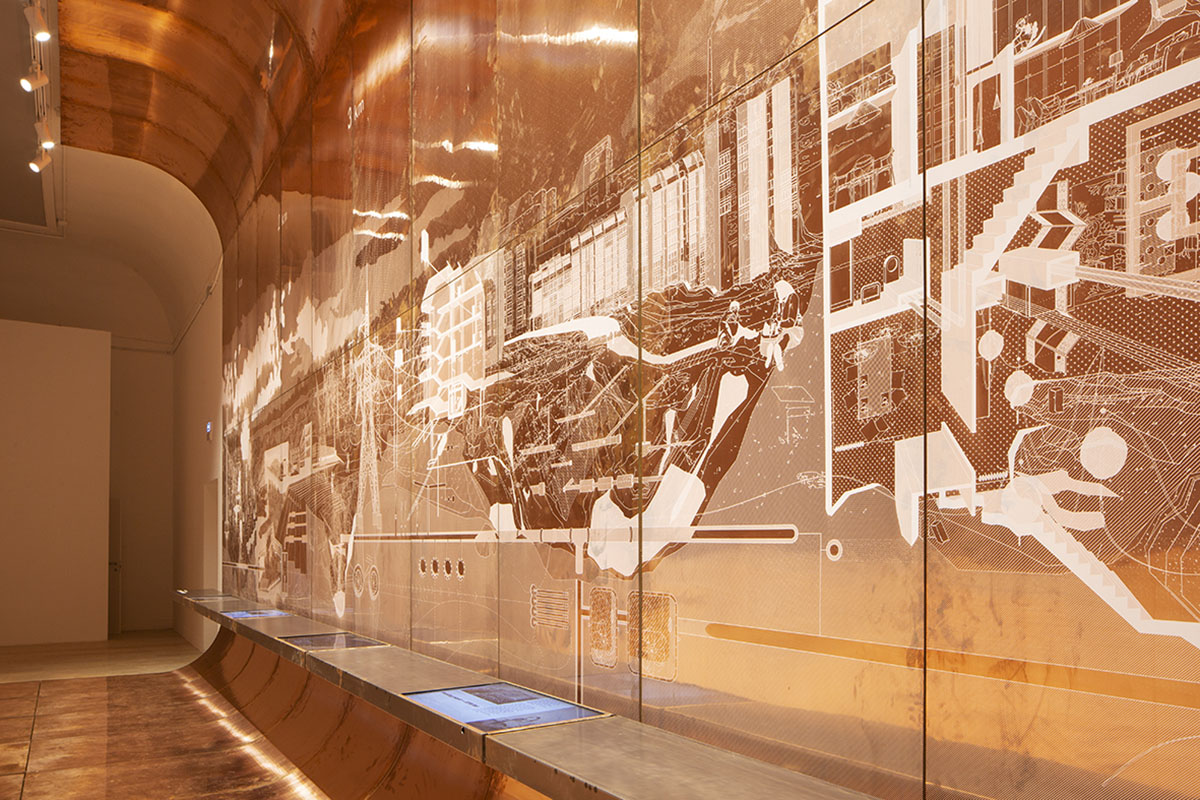 In this regard, the "8th kilometer" represents a qualitatively new layer of the town, suggesting directions of its further development beyond the mining industry.

The exhibition demonstrates that in the example of the Bor Basin, developed mining production has so far been unambiguously positioned as the sole factor of the town’s existence. 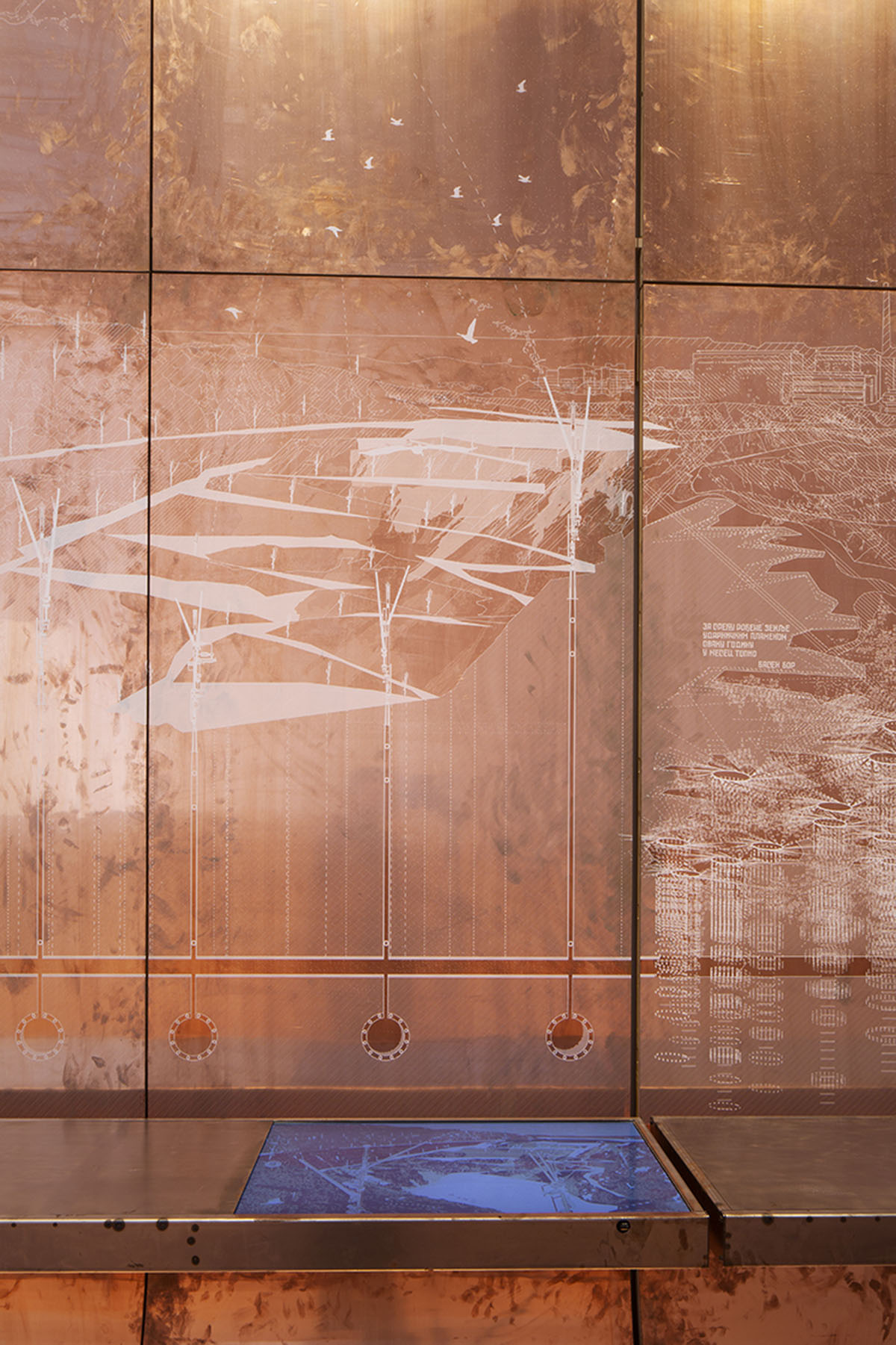 By placing this production into global capital flows, the town exhibits the absence of opportunities to improve its social and spatial plans.

At the same time, due to the unsustainability of the previously proposed alternatives to its socio-economic development, Bor also represents an opportunity to redefine the life-work relationship and consequently its physical framework.

Therefore, the exhibition and research investigate the future of this relationship through the theme of the “eighth kilometer” which introduces disruption into the order of the existing seven urban zones—“kilometers.” 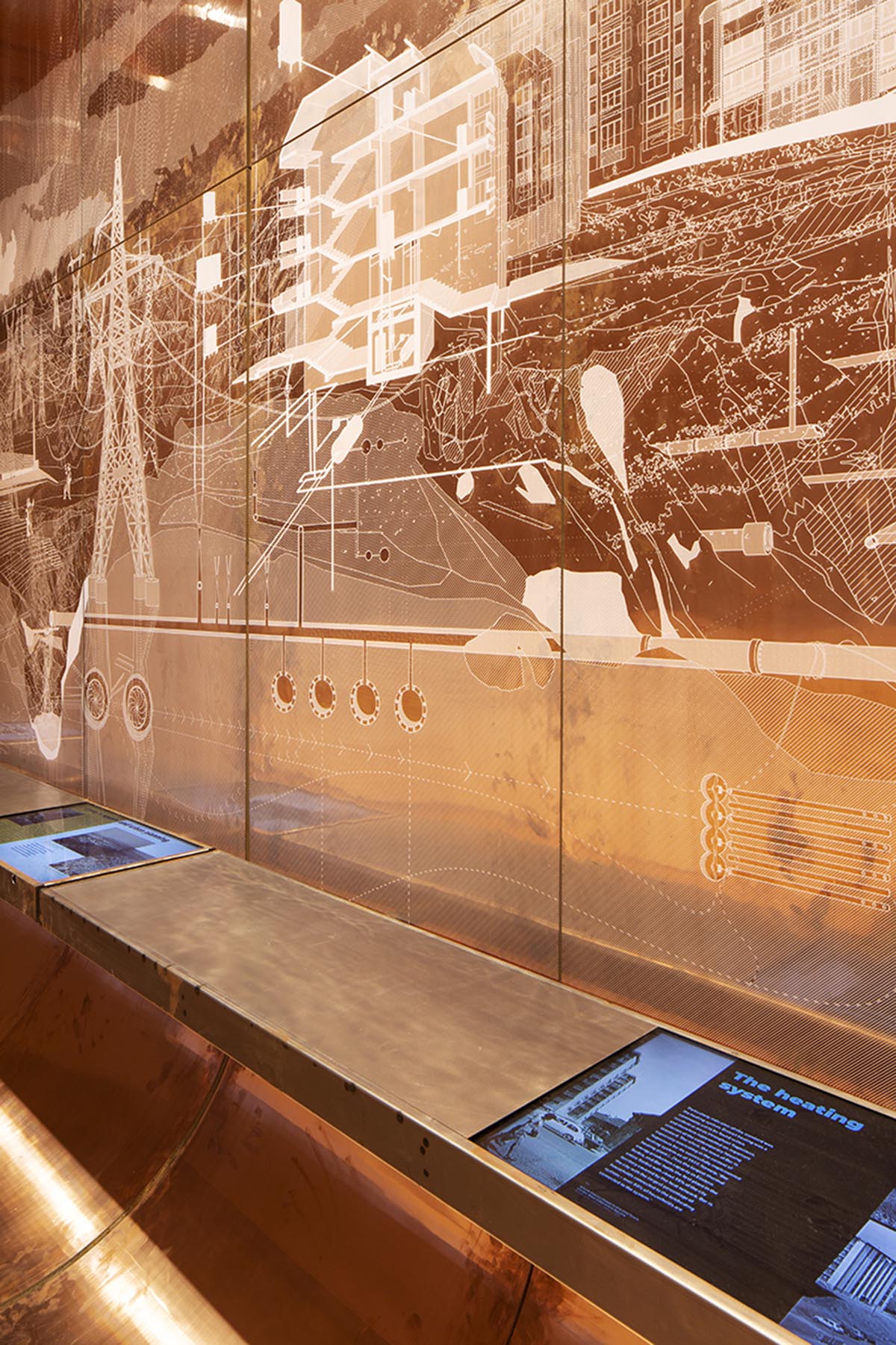 At the heart of the exhibition, there is a spatial simulation of the open-cast mine as a large scale model bordering the town’s seven kilometers, they are metaphorically presented via spatial and graphic simulations.

While the surface area is made from copper tin, this copper skin forms the Pavilion’s frontal longitudinal wall, copper is the main product of Bor’s mining industry, thus attracting visitors’ attention to its captivating visual character. 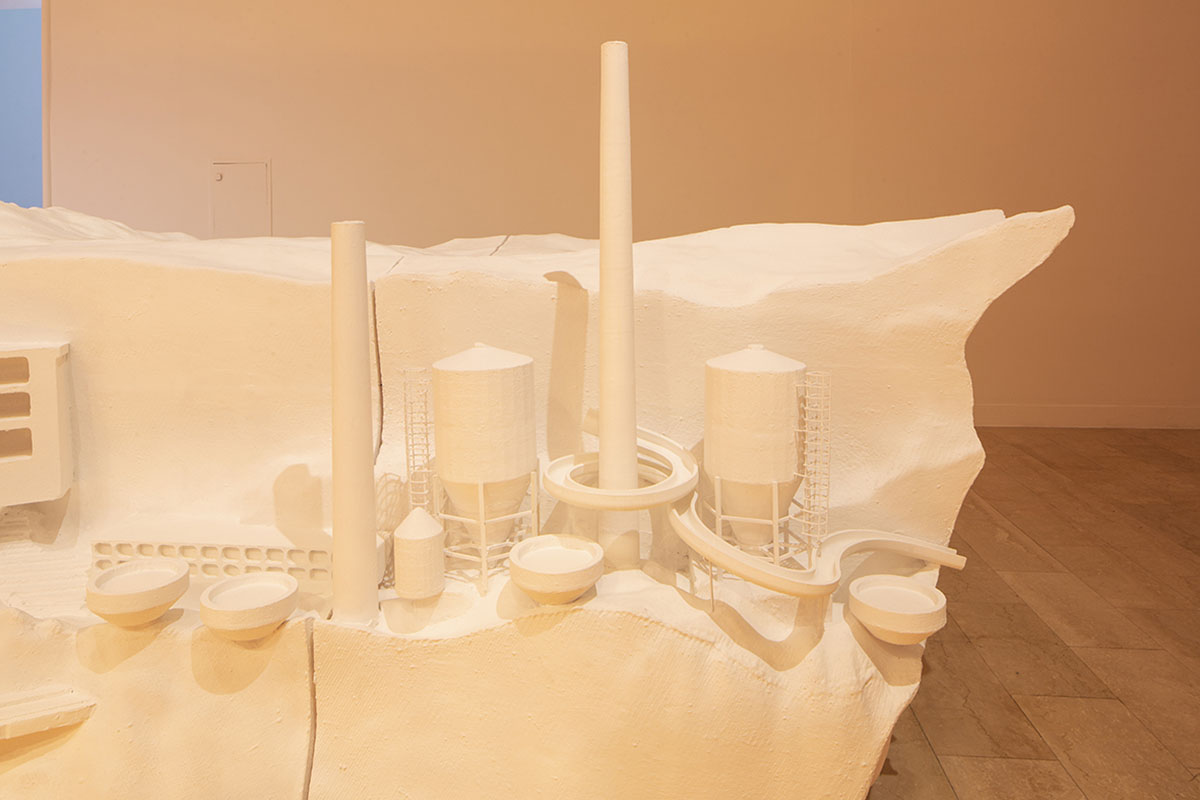 "A contribution to the authenticity of the exhibition is the origin of the copper sheets used in the production of the exhibition, which are a direct product of the Bor mine whose copper ore was processed in Rolling Mill in Western Serbia," added the statement.

"Each of the kilometers is explored through both the archive and design research of a topic specific to the designated area and the town itself. The respective topics are: industry, town planning, cultural spaces, housing standard, everyday life, ecology and demography." 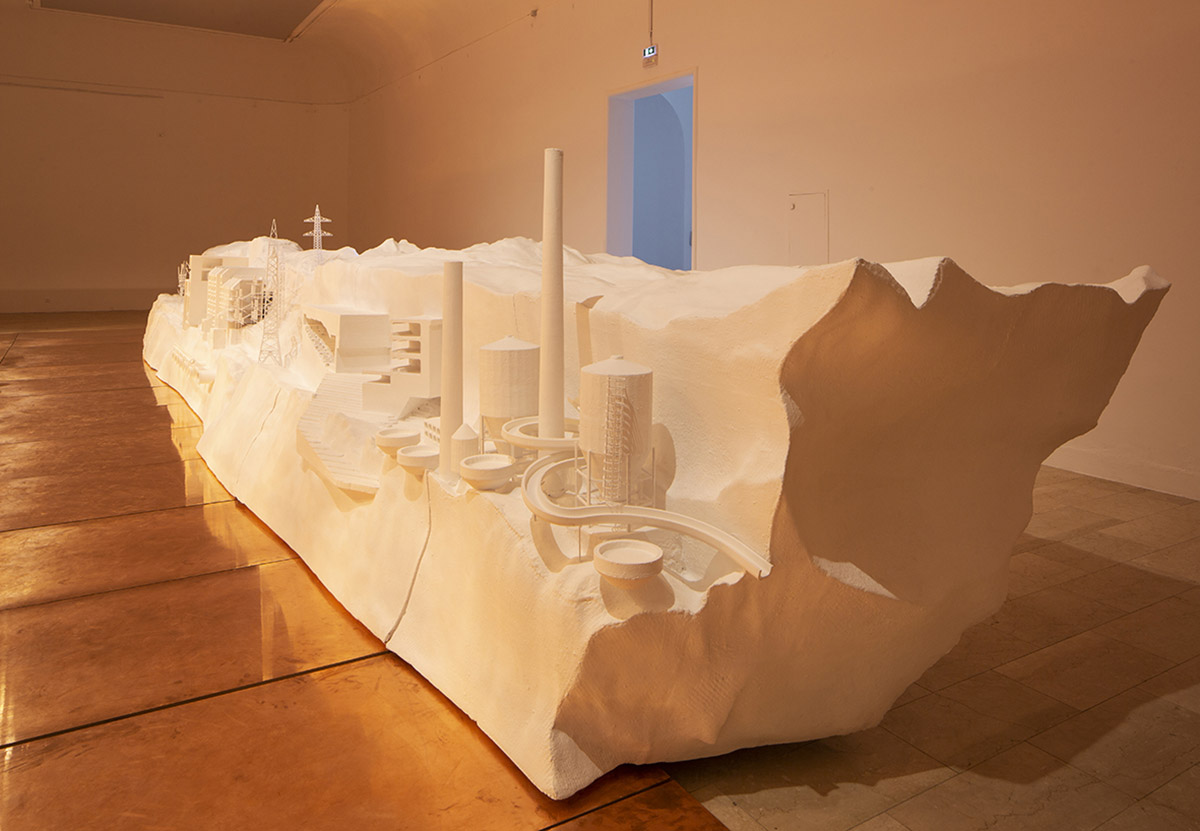 Through collaborative work with an interdisciplinary team of experts and locals, the authors of the exhibition seek to recognize the capacity of architects to provoke a debate about the present and the future of Bor, and possibly other such towns. 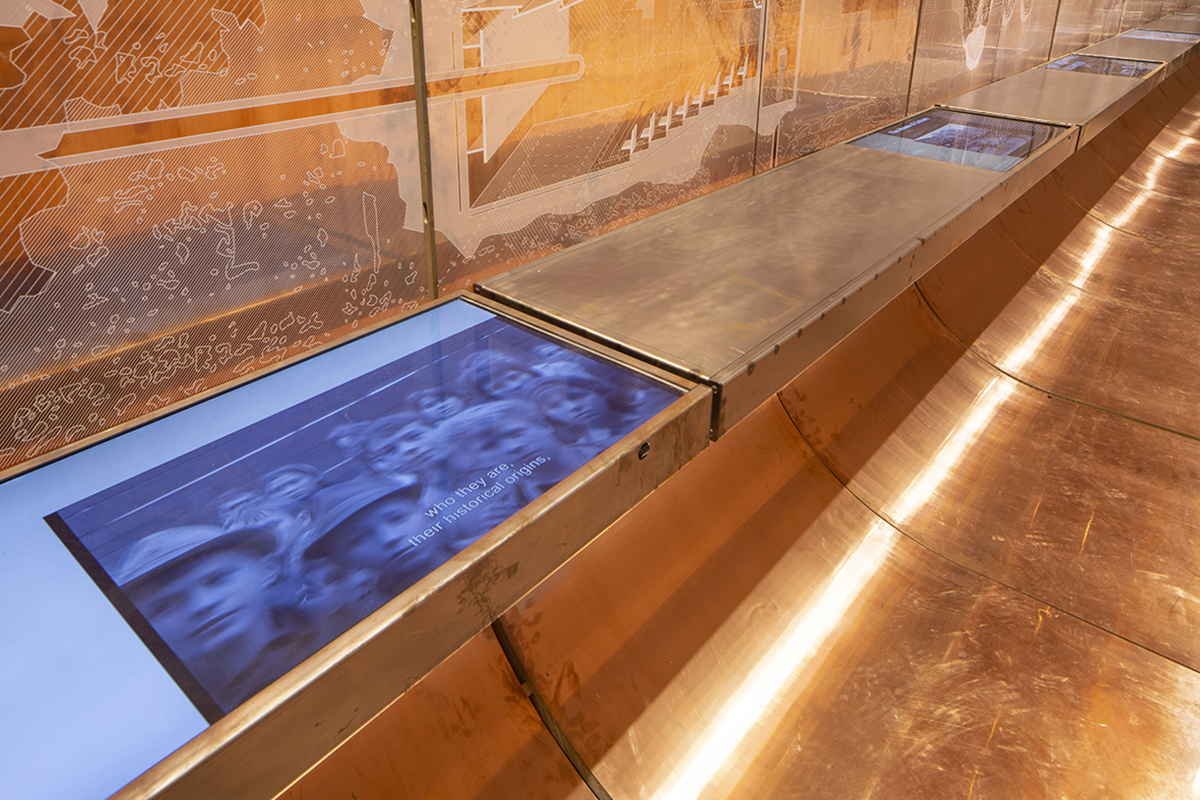 The exhibition authors along with the Commissioner also presented the exhibition catalogue on August 29 as part of the Midissage events in Serbian Pavilion in Giardini, Venice.

The MuBGD (Moderni u Beogradu / Modern in Belgrade) project brings together a group of eight architects who share a particular interest in architectural illustration.

Together, they launched the MuBGD platform in 2018 as a means of promotion, but also critical analysis of Belgrade’s architectural heritage. 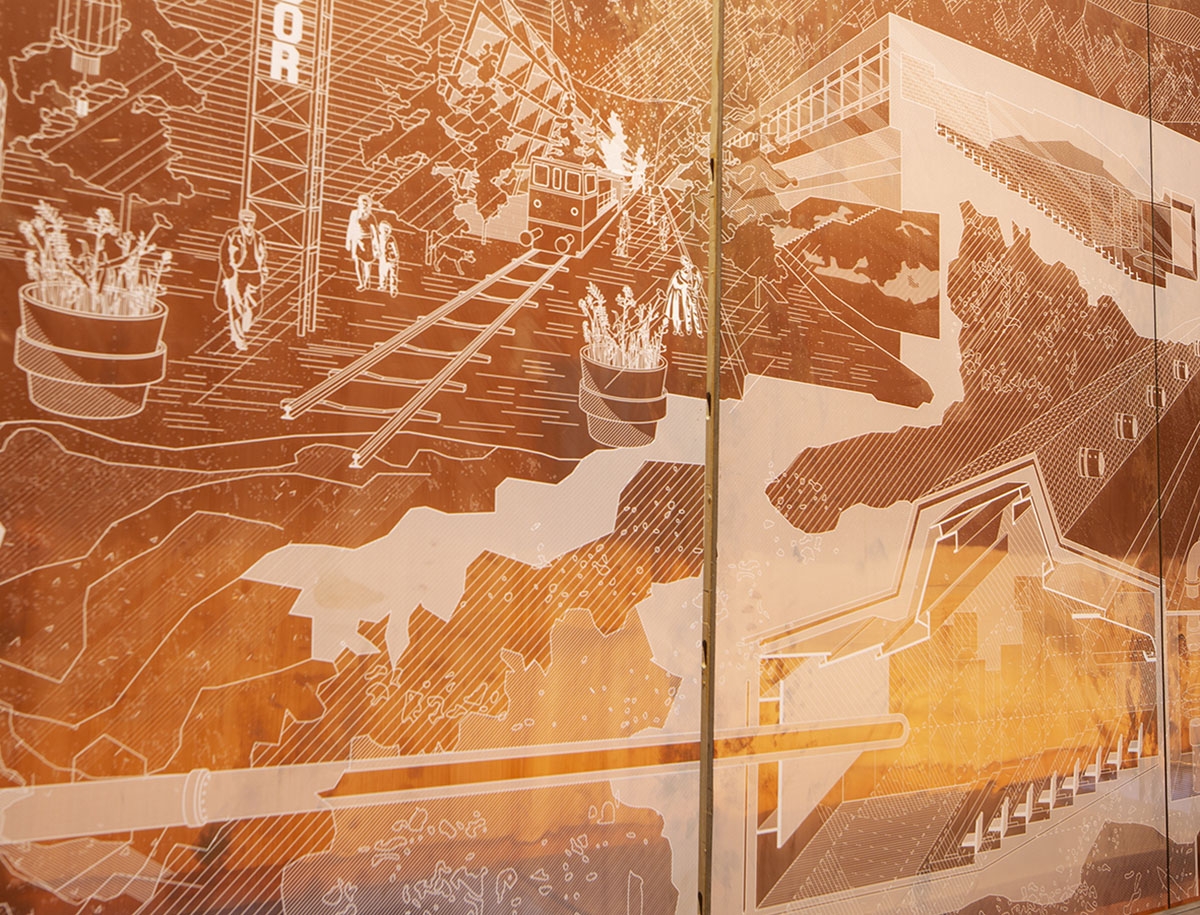