The new pedestrian bridge connects America the Beautiful Park with downtown Colorado Springs, which was hoisted into the air, driven across the railroad using self-propelled modular transporters. 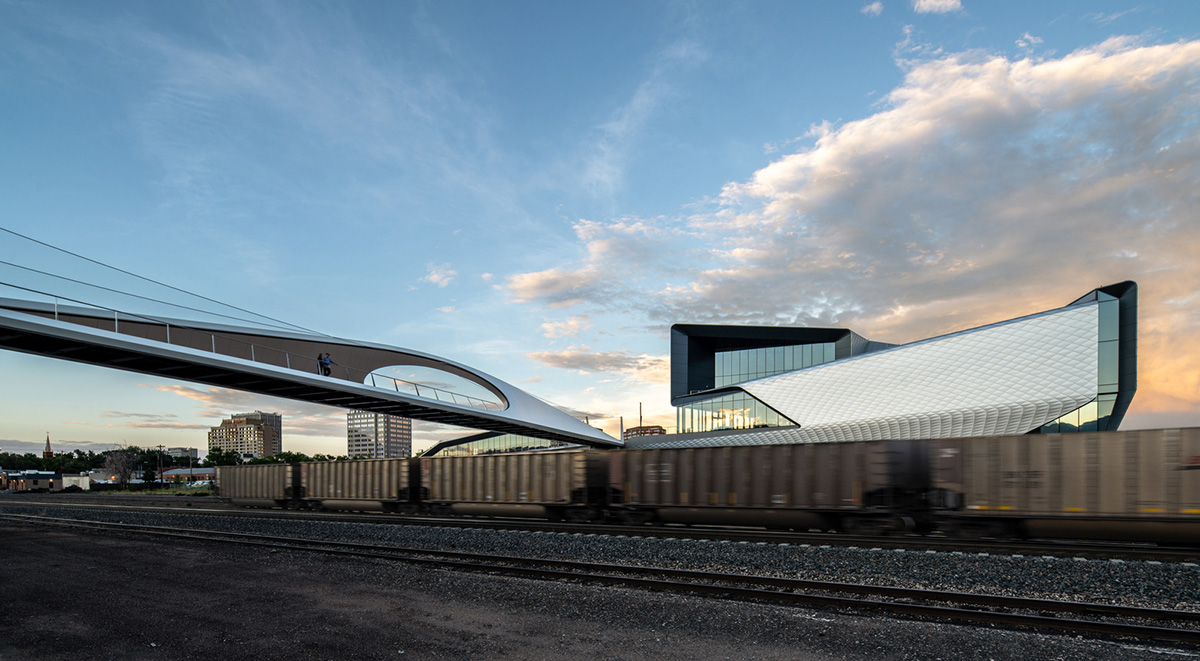 With a weight of up to 550 tons, the design of the bridge, which has a flowing form in the air, is inspired by the gravity-defying movement of the athletes. 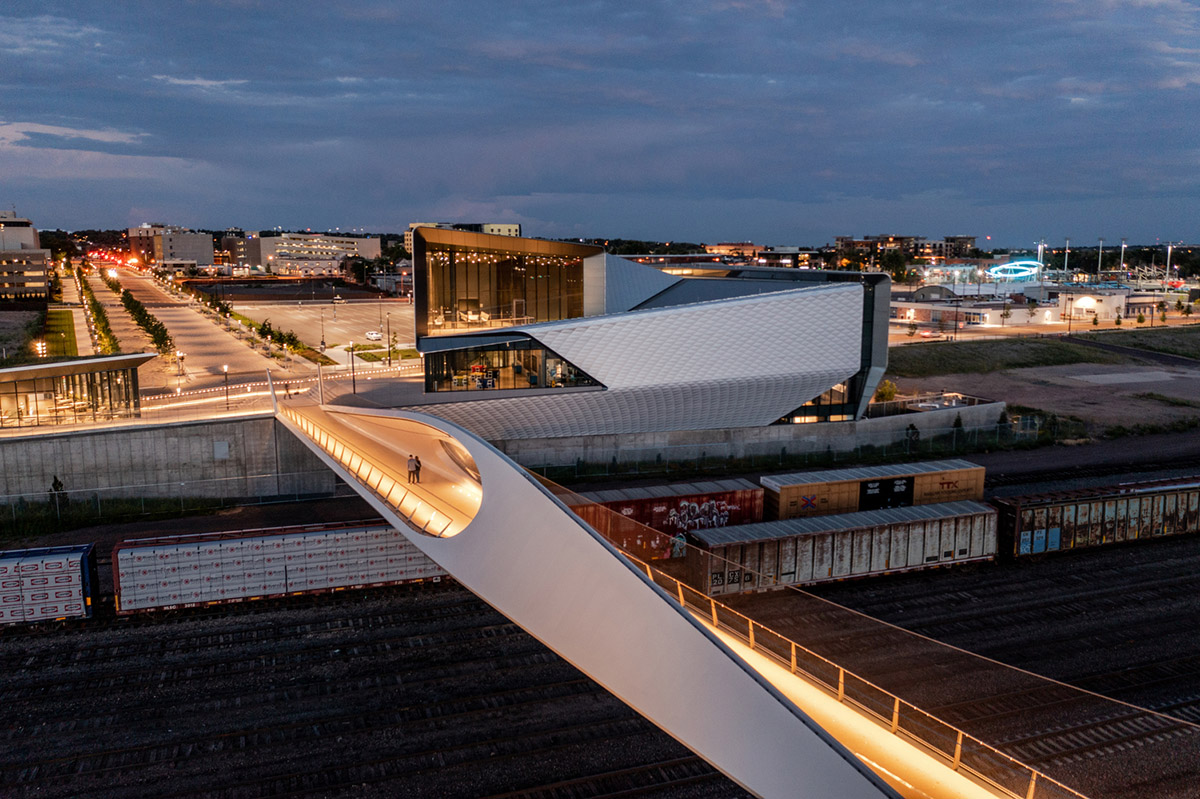 "The bridge is an exercise in fitness - both in terms of material and geometry. The hybrid steel structure system functions as an arch and a truss, elegantly preserving views from Downtown to the majestic Rocky Mountains and Pikes Peak- America’s Mountain," said DS+R Partner-in-Charge and Lead Designer Benjamin Gilmartin.

"The bridge will establish a pedestrian gateway from the west into downtown and connect to the U.S. Olympic and Paralympic Museum. The bridge also stitches together a growing network of pedestrian bicycle paths including the Pikes Peak Greenway and Midland Trail running alongside Monument Creek."

"Design elements include an elevator, staircase, ADA and bike-friendly accommodations with bicycle wells and an overlook at the west end of the bridge," added Gilmartin. 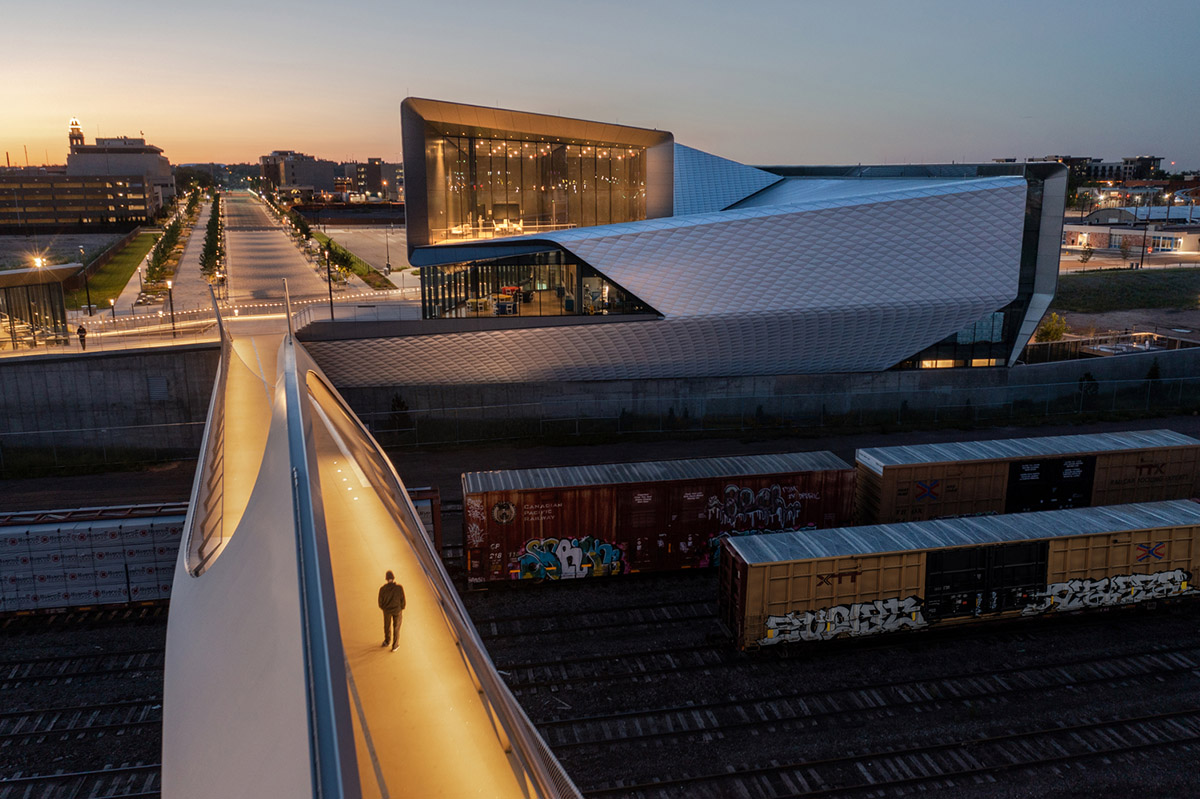 As Diller Scofidio + Renfro explains, the bridge also brings together a growing network of pedestrian bicycle paths including the Pikes Peak Greenway and Midland Trail running alongside Monument Creek.

The bridge was prefabricated and assembled by King Fabrication in Houston, Texas and a full fit up was conducted in May 2020 to ensure a continuous geometry. 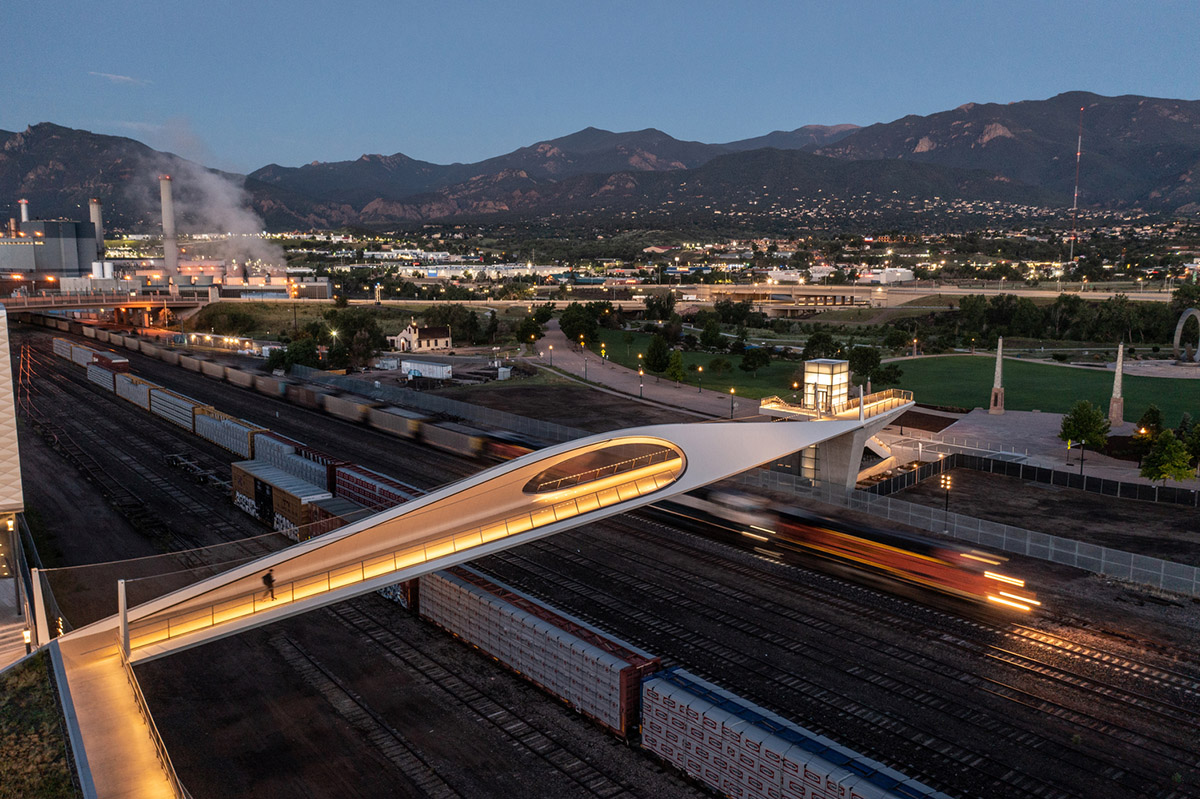 Its walkway surface is made of concrete with parapets, and it features architectural finishes, with stainless steel cables. The entire 300-ton superstructure was driven into place using self-propelled modular transporters to place the entire bridge on its abutments during an eight-hour window of time, to minimize outage for the rail lines and yard in fall 2020. 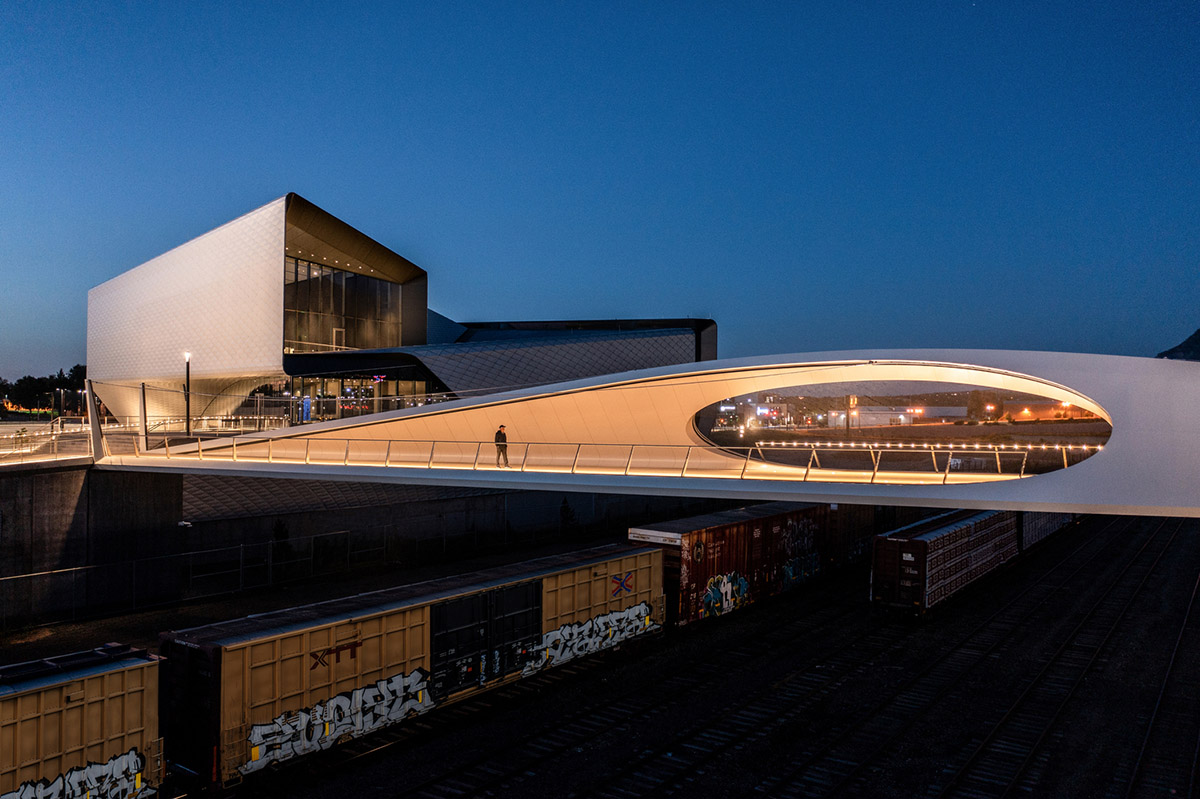 Safely accommodating people of all ages and abilities, the bridge is accessed by stair and a glass elevator at its widest point. At it’s widest point, an oculus at either side of the bridge frames the museum and downtown to the east, a platform for trainspotting below, and a distinct look out to the Rocky Mountain to the west. 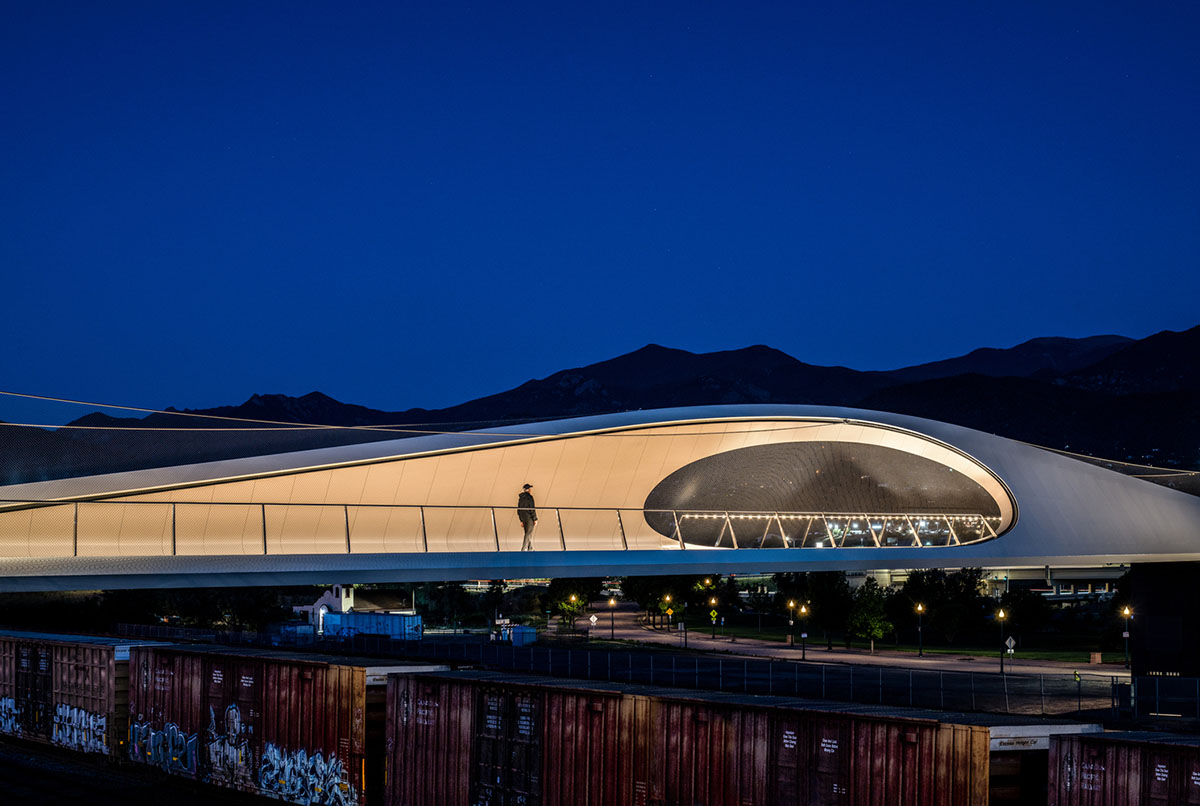 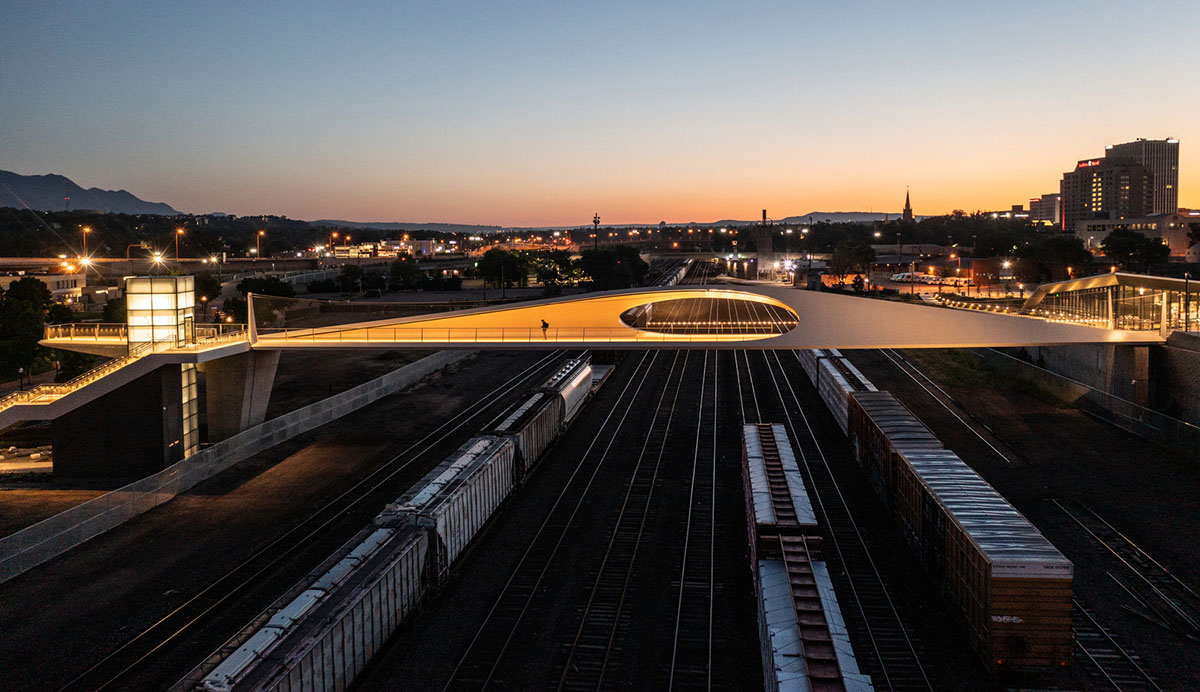 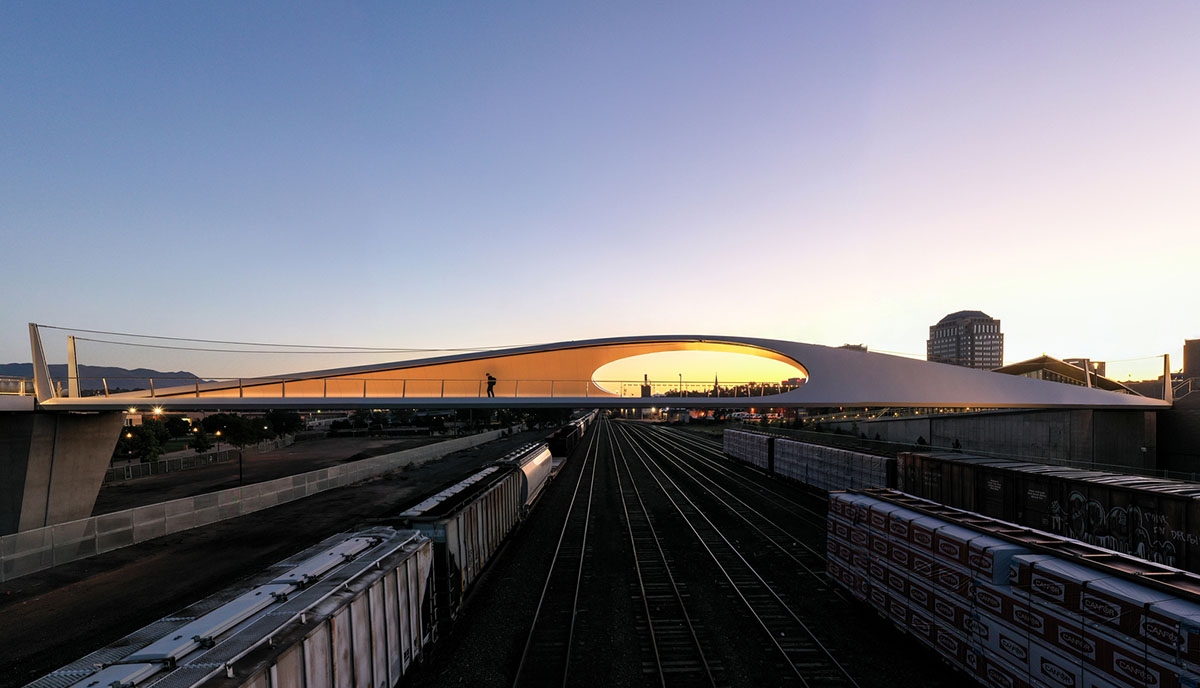 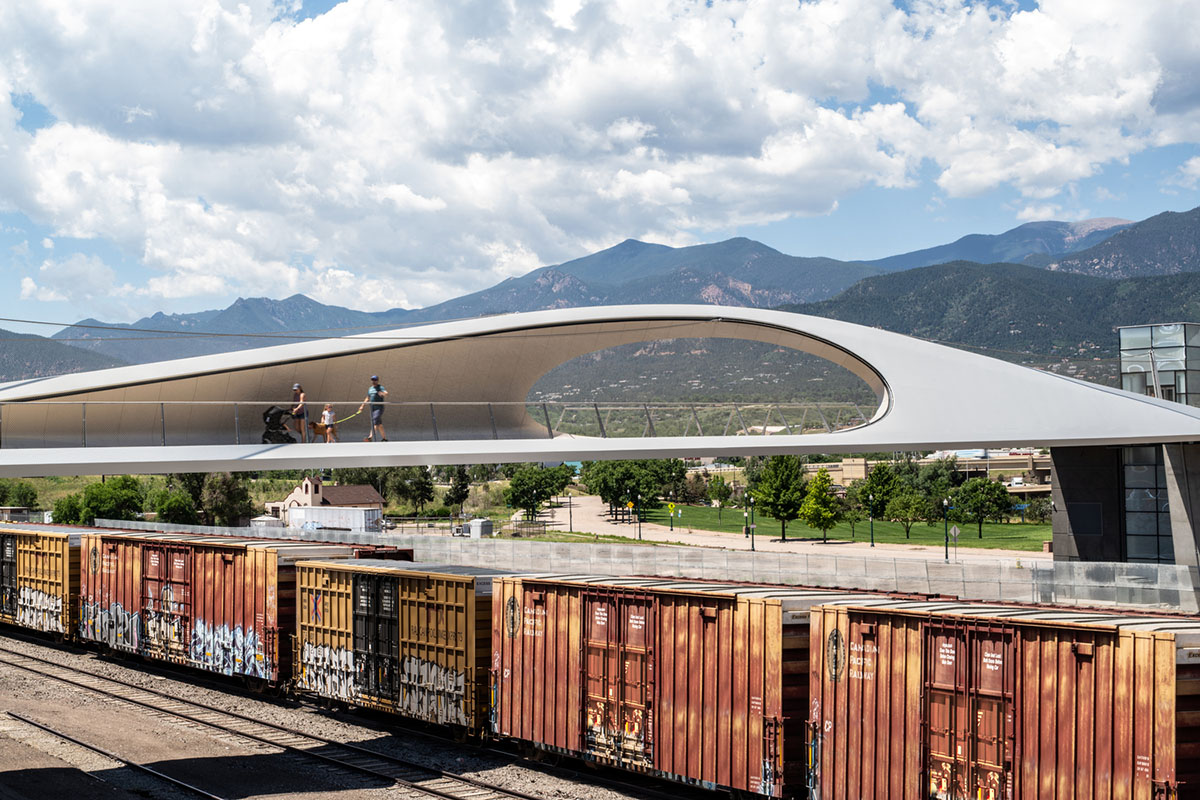 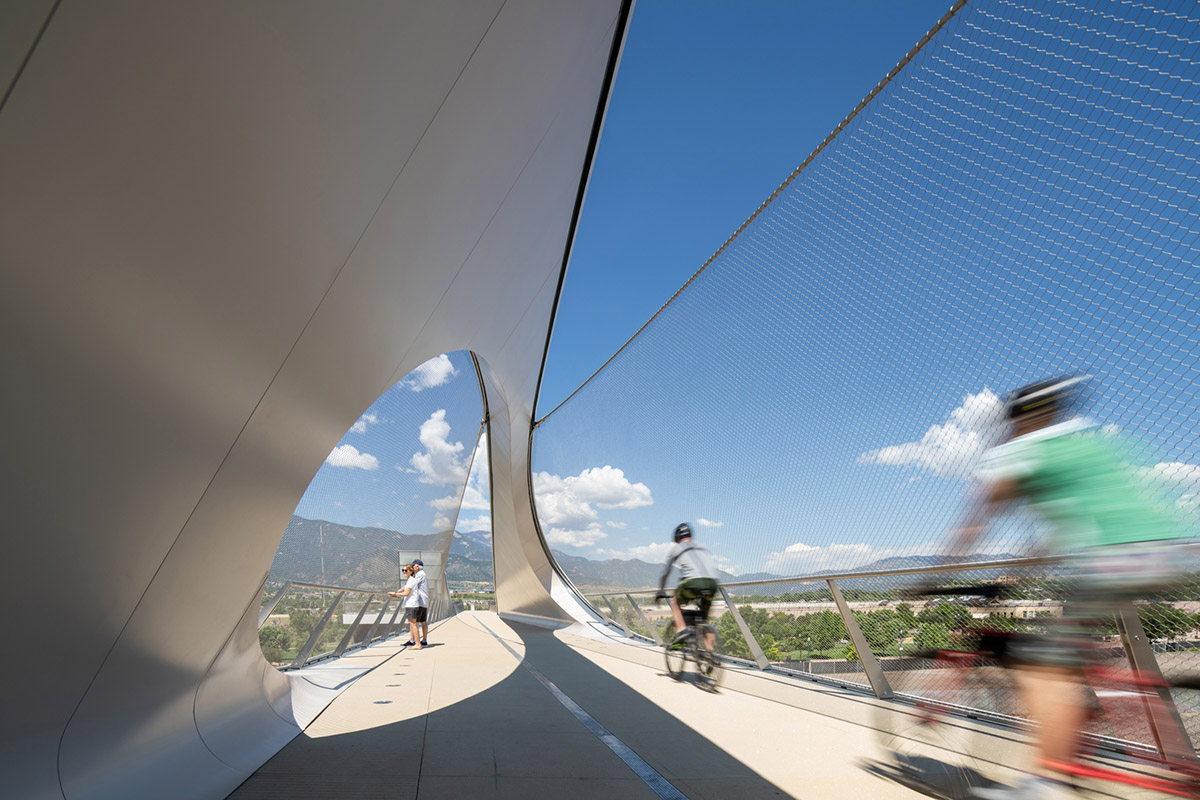 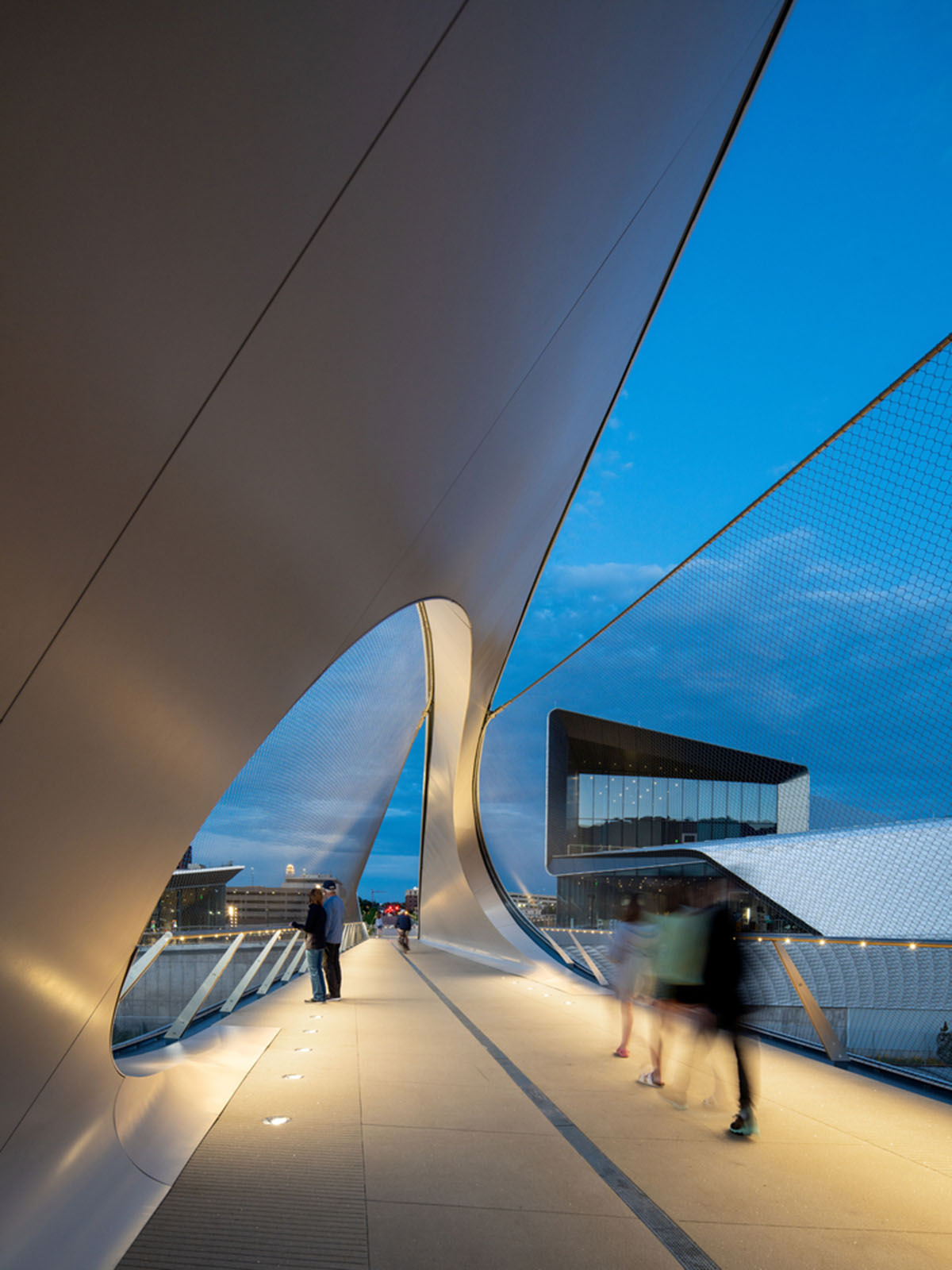 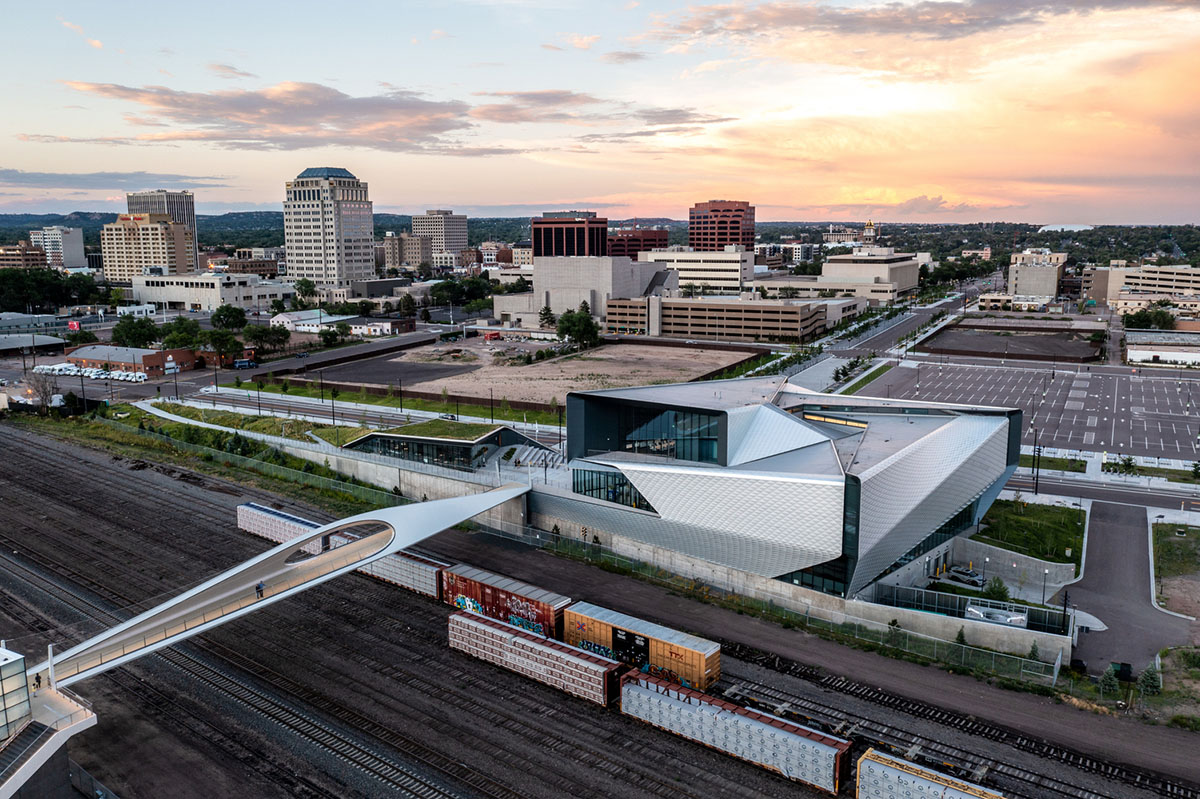 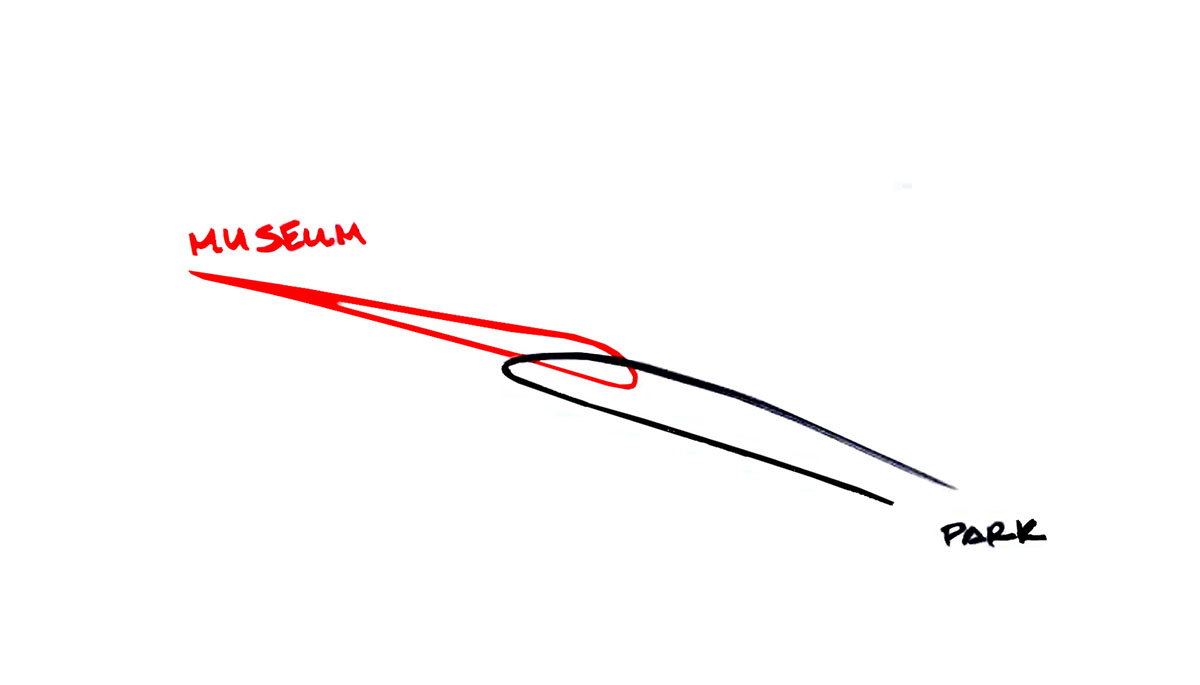 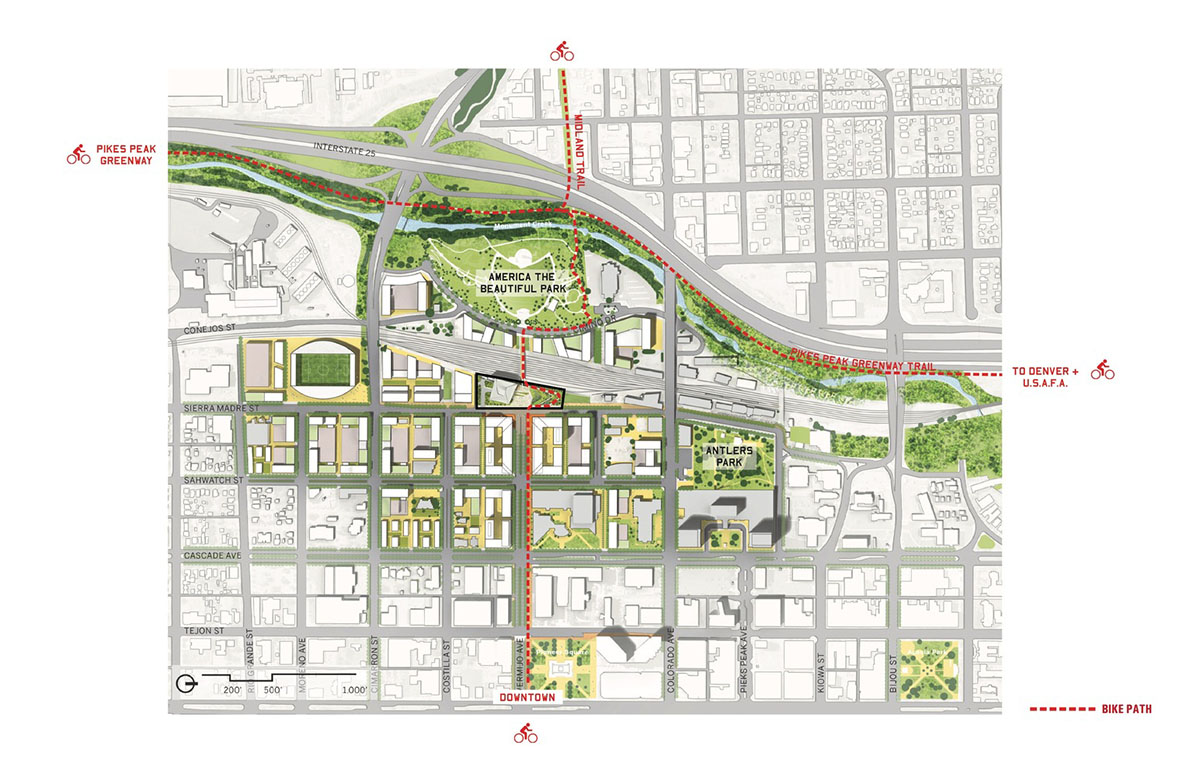 Sean Gallagher, Associate Principal and Director of Sustainable Design at Diller Scofidio + Renfro, previously spoke to WAC in a live interview as part of WAC's Live Interview Series. Gallagher talked about the design philosophy of DS+R, and the multi-dimensional facets of health and sustainability in design.