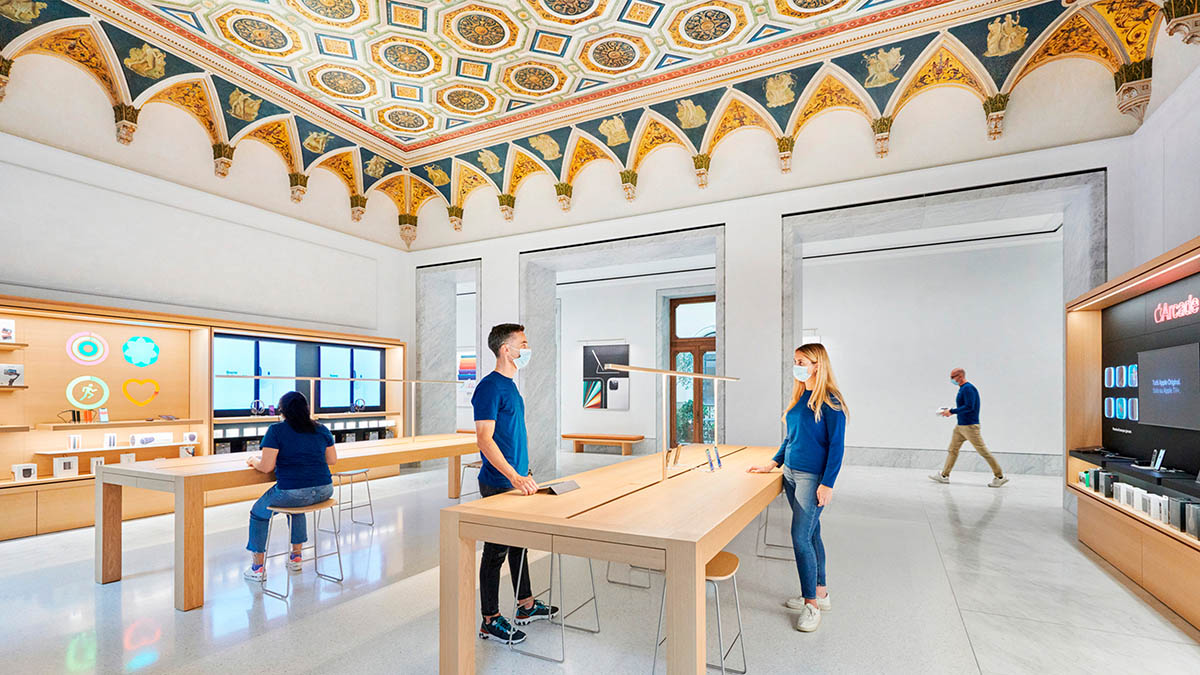 Foster + Partners has converted the historic Palazzo Marignoli into a new Apple store in Rome, Italy.

Named Apple Via Del Corso, the newly-designed Apple store, situated on Via del Corso, one of the most vibrant streets in Italy’s capital, celebrates the building’s fascinating and multi-layered history with a fresh look.

Foster + Partners' new design unveils painted ceilings and frescoes dating back to the 1890s juxtaposed with modern graffiti artworks from the 1950s.

The building celebrates the murals, hidden from view for decades, and the new Apple store creates a space where the city and history truly converge in one space. 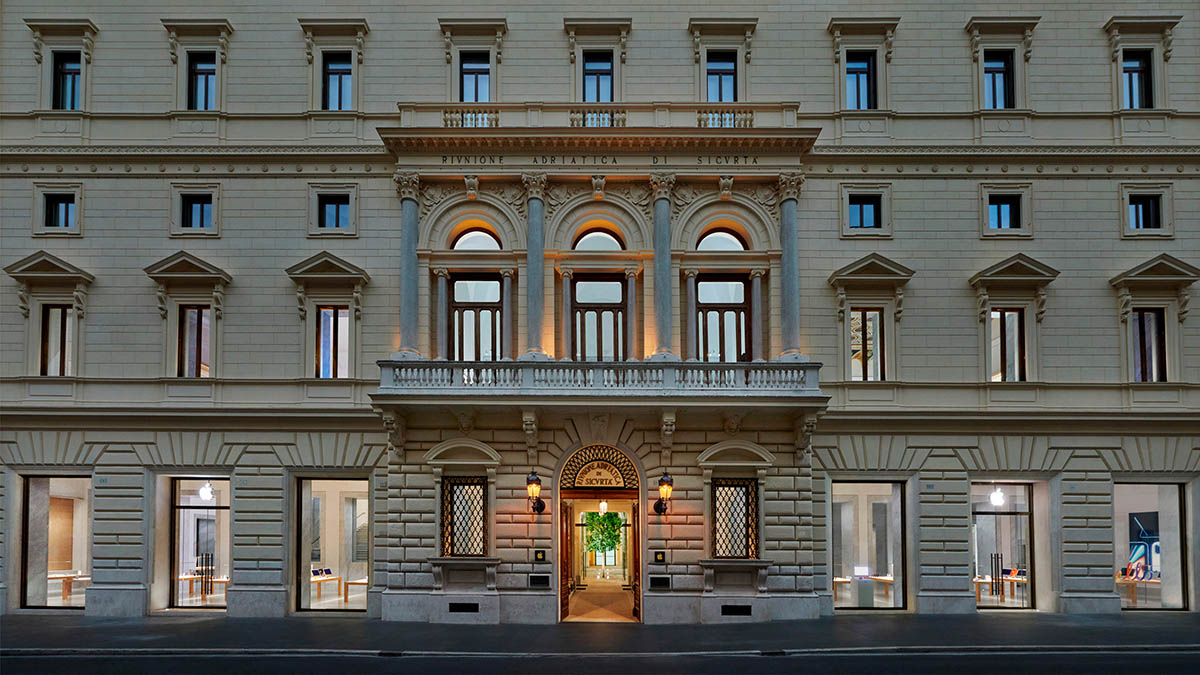 "The joy of the project was to peel back and rediscover the layers of history throughout the building and revealing its eclectic past, which ranges from the historic painted ceilings and the frescoes by Fabio Cipolla, both from the 1890s, to the more recent graffiti artworks by Afro Basaldella," said Stefan Behling, Head of Studio, Foster + Partners.

"Palazzo Marignoli has seen so much throughout its history, and we feel truly privileged to be able to be part of its newest phase of life. Especially, as Rome is one of my favorite cities in the world," Behling added. 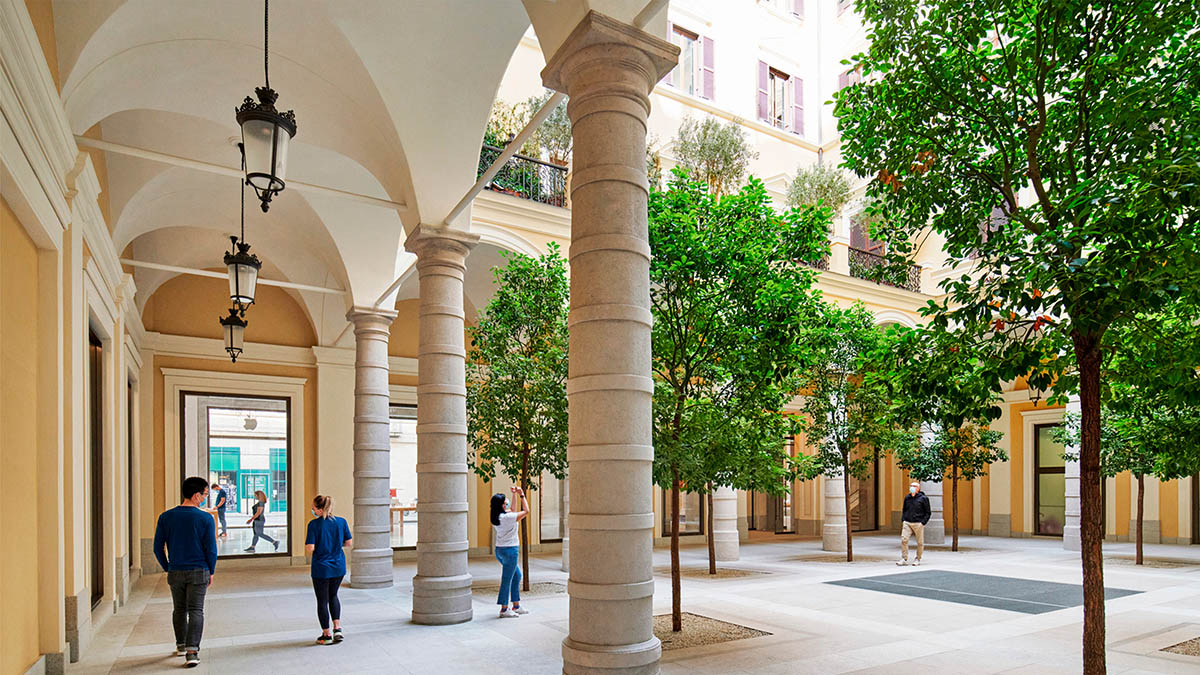 The building is located on the site of a 16th century convent "delle Convertite", the historic Palazzo Marignoli was designed by renowned architect Salvatore Bianchi in 1870 for Filippo Marignoli.

In the 19th century Italian architect Giulio Podesti completed a second addition to the building, the main façade we see today.

From 1890 to 1955, it housed the famous Caffè Aragno, a fashionable meeting place for writers, journalists and political figures visiting from the neighboring parliament.

"On the ground floor two large ceiling paintings called “Dawn” and “Dusk” by Fabio Cipolla and Ettore Ballerini respectively, have been carefully restored and integrated within the new store," said Foster + Partners.

"One of the most exciting finds were the multiple graffiti panels created by the artist, Afro Basaldella – a contemporary of Picasso and one of Italy’s most important artists – depicting urban scenes from Italian cities."

Foster + Partners has carefully restored the façade towards Via del Corso, thanks to its large windows they allow views into the store and towards a beautiful internal courtyard. 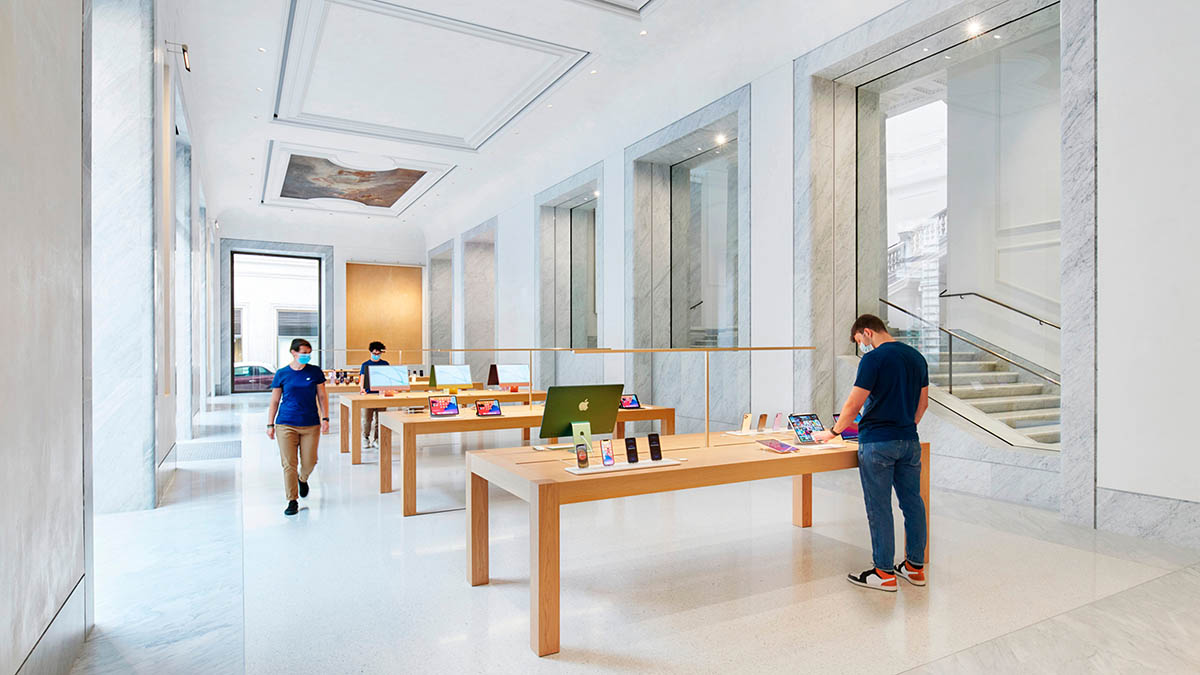 Entry to the store is provided through a historic passage that leads to the courtyard flanked by two generous and striking spaces that celebrate the grandeur of the historic palazzo.

"The arches and vaults of the central passage are lined with Carrara stone, carefully selected to match the existing marble and create dramatic vistas that lead you to the grand staircase," added the studio.

"These spaces are an ideal setting for all customers to engage, explore and be inspired by Apple’s latest products and the artwork that surrounds them." 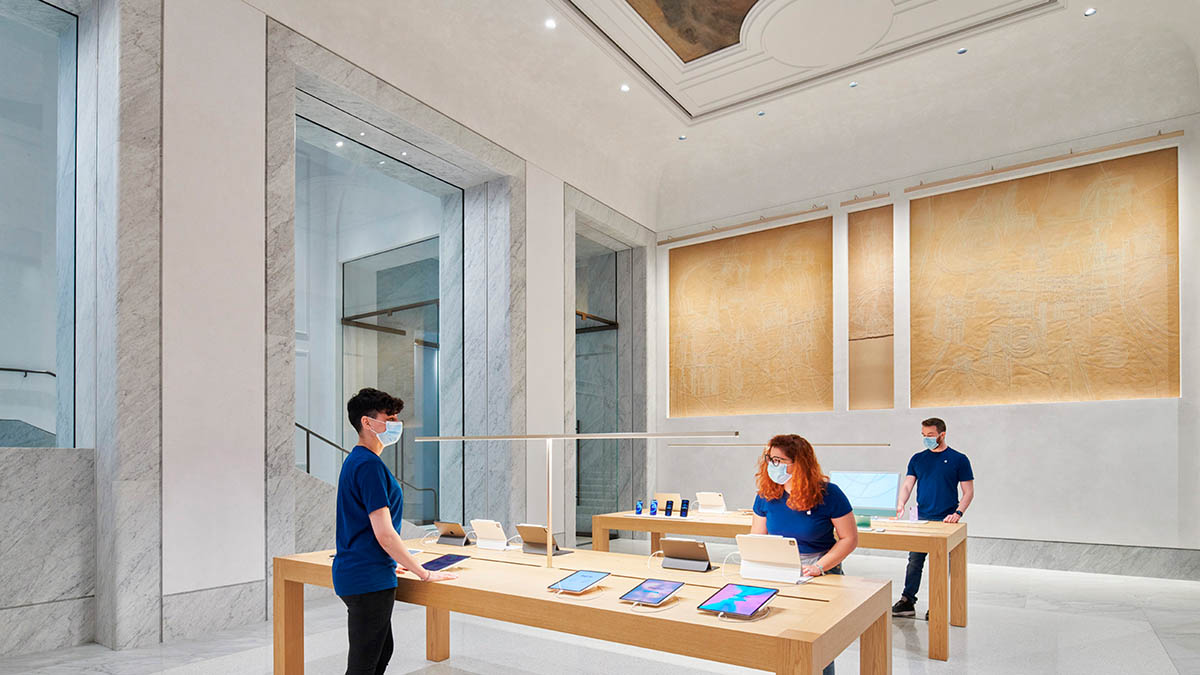 Courtyard is a significant remnant of the 16th century monastery and its garden, forming a peaceful green heart offering respite from the busy shopping street.

The courtyard creates a calm focus for the entire building, which is visible from almost every corner of the store. The Camphora trees with their soft canopies offering dappled shade become the complementary elements of the courtyard. The trees create a welcoming atmosphere for visitors, and leafy vistas up to the lush courtyard terrace on the piano nobile. 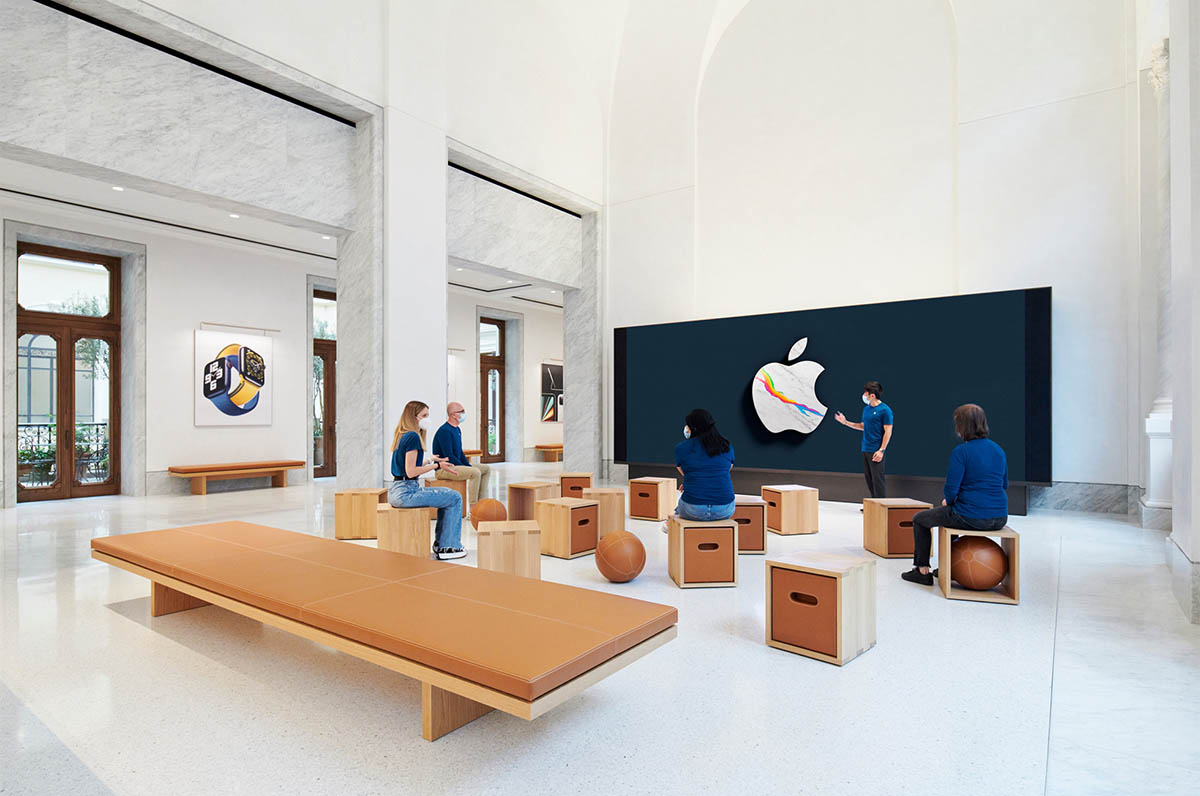 "The historic lanterns that were found on the site have been carefully restored by local specialists using high-efficiency LEDs that mimic traditional candlelight," added the studio. 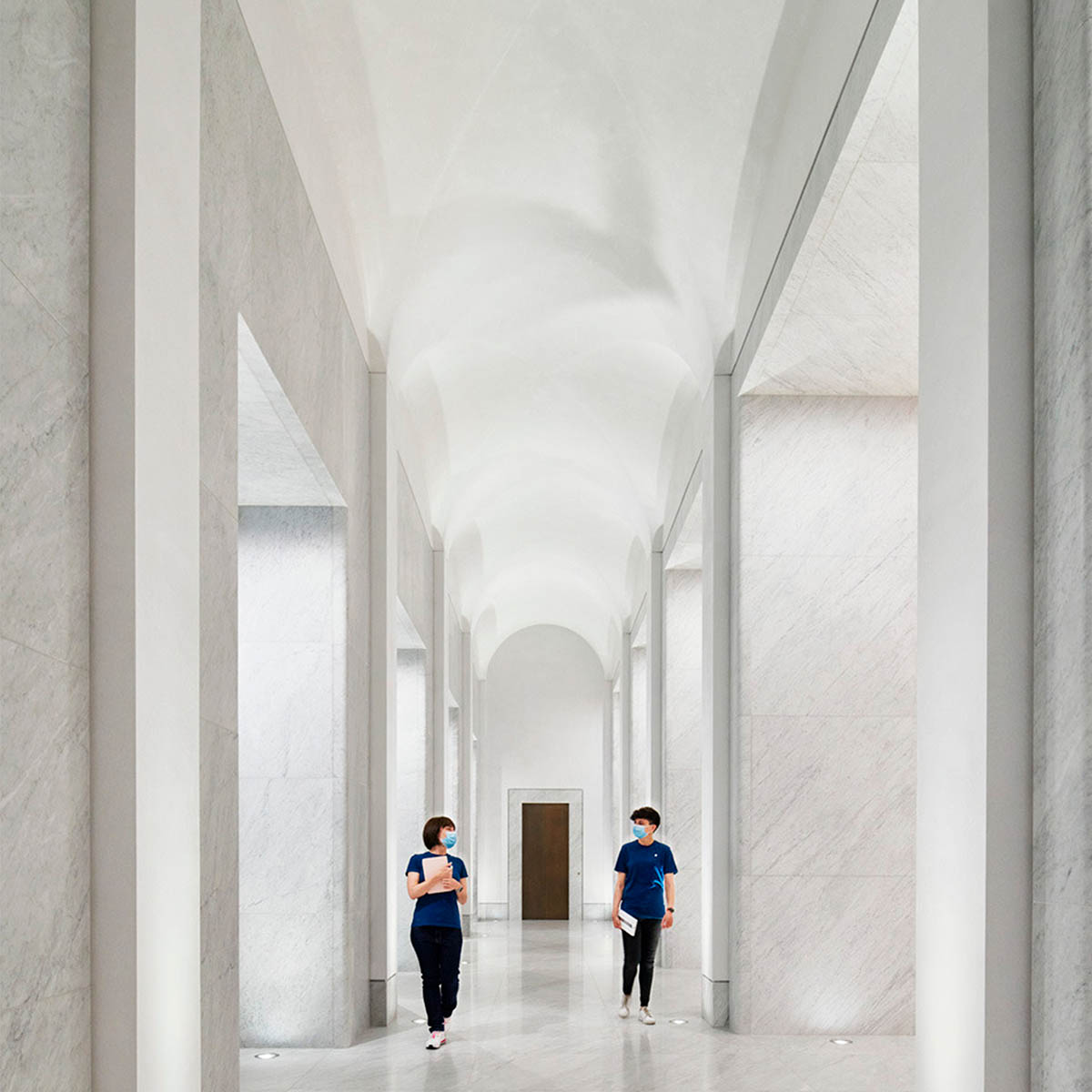 There is a grand staircase built originally by Marignoli provides access his residence on the first floor leads visitors to the piano nobile, meticulously restored with its original Carrara marble detailing.

The team also has restored the original skylight, which was built over during a previous refurbishment, to flood the space with artificial light that matches the tone of natural daylight. 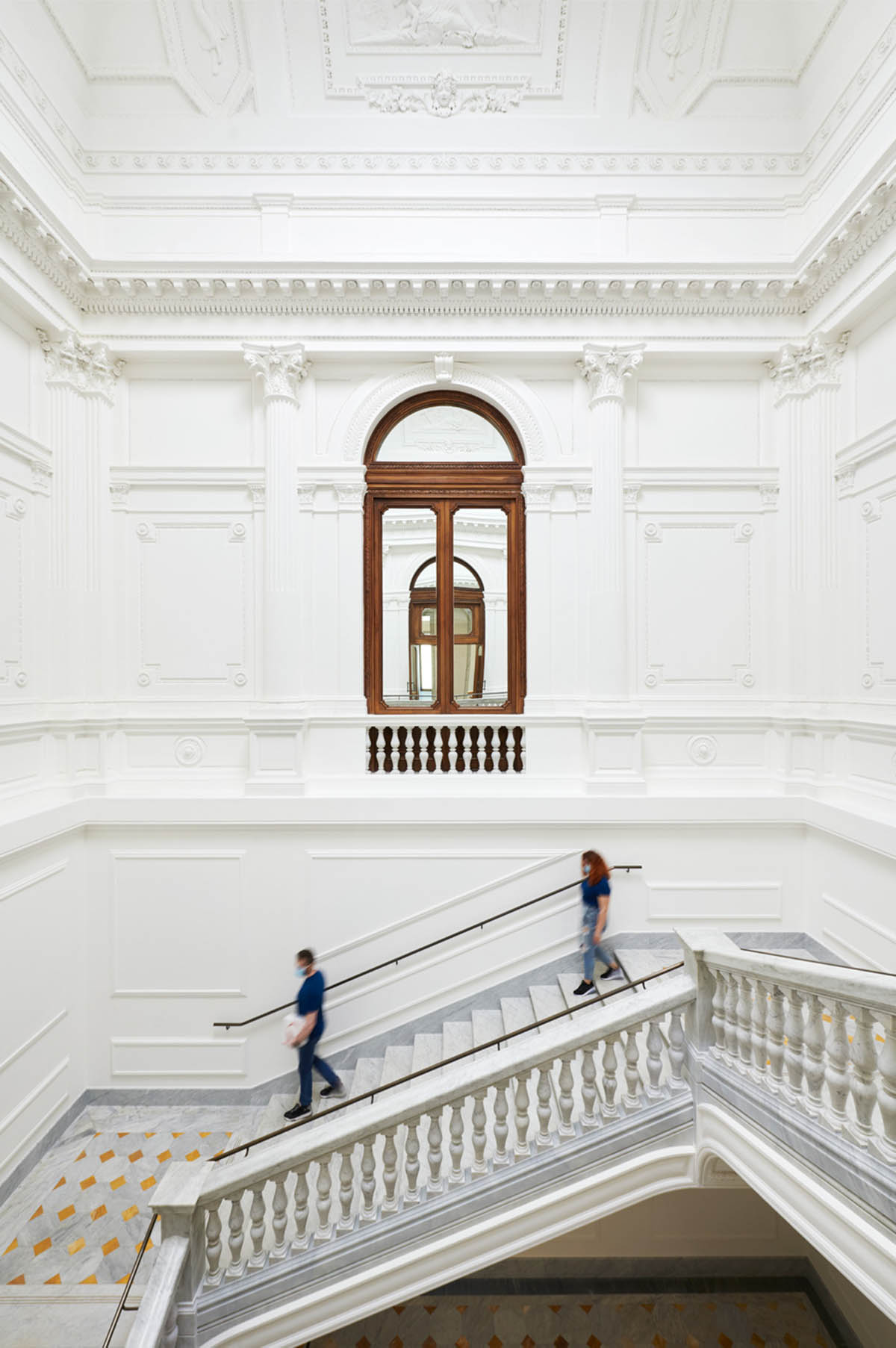 On the first floor, visitors encounter with the Apple Forum within the vaulted former ballroom. The Apple Forum is used for Apple's workshops and events.

"The space adjacent to the grand ballroom – historically used as a games room – features an elaborate geometrically patterned, hand-painted ceiling, which was discovered during the course of construction," continued Foster + Partners.

The firm stated that "a dedicated team of conservators have worked thousands of hours to restore the ceiling to its former glory." 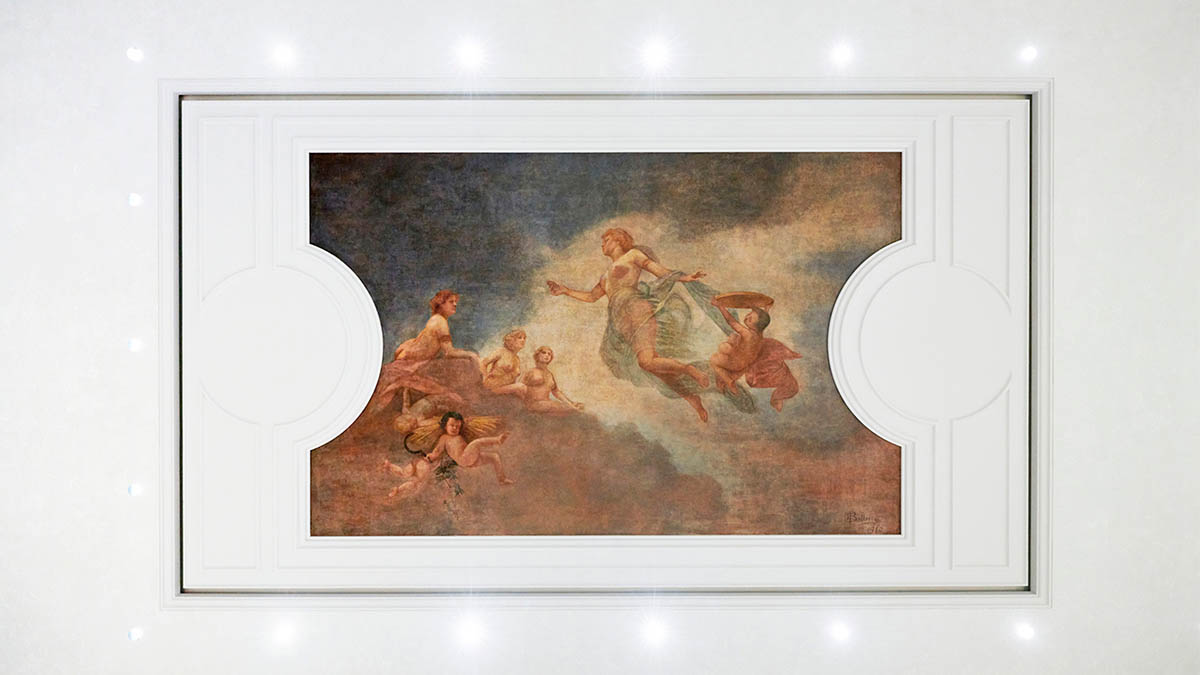 "Linking all these rooms is a gallery space that opens up onto a terrace. Inspired by historic Roman roof terraces, the space is filled with fragrant jasmine vines and olive trees, looking down onto the canopy of trees in the courtyard, offering another delightful place for visitors to unwind and relax."

As Foster + Partners stated, the new "Apple Via del Corso is a celebration of the past and future and delicately articulates the different eras of history, creating a harmonious juxtaposition of old and new, and takes this building with so much history into its next phase of life." 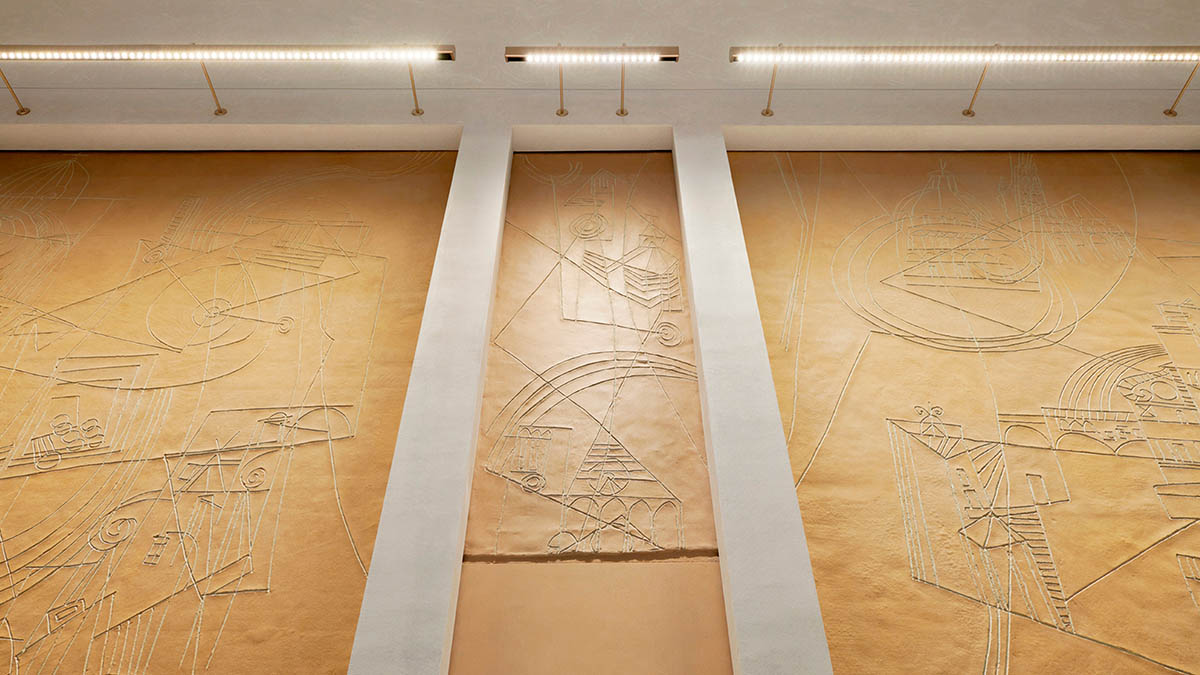 Foster + Partners recently unveiled plans for a residential-led masterplan in Bangkok. The firm completed an office tower clad by triangular pieces of copper in Yekaterinburg.

All images courtesy of Foster + Partners unless otherwise stated.