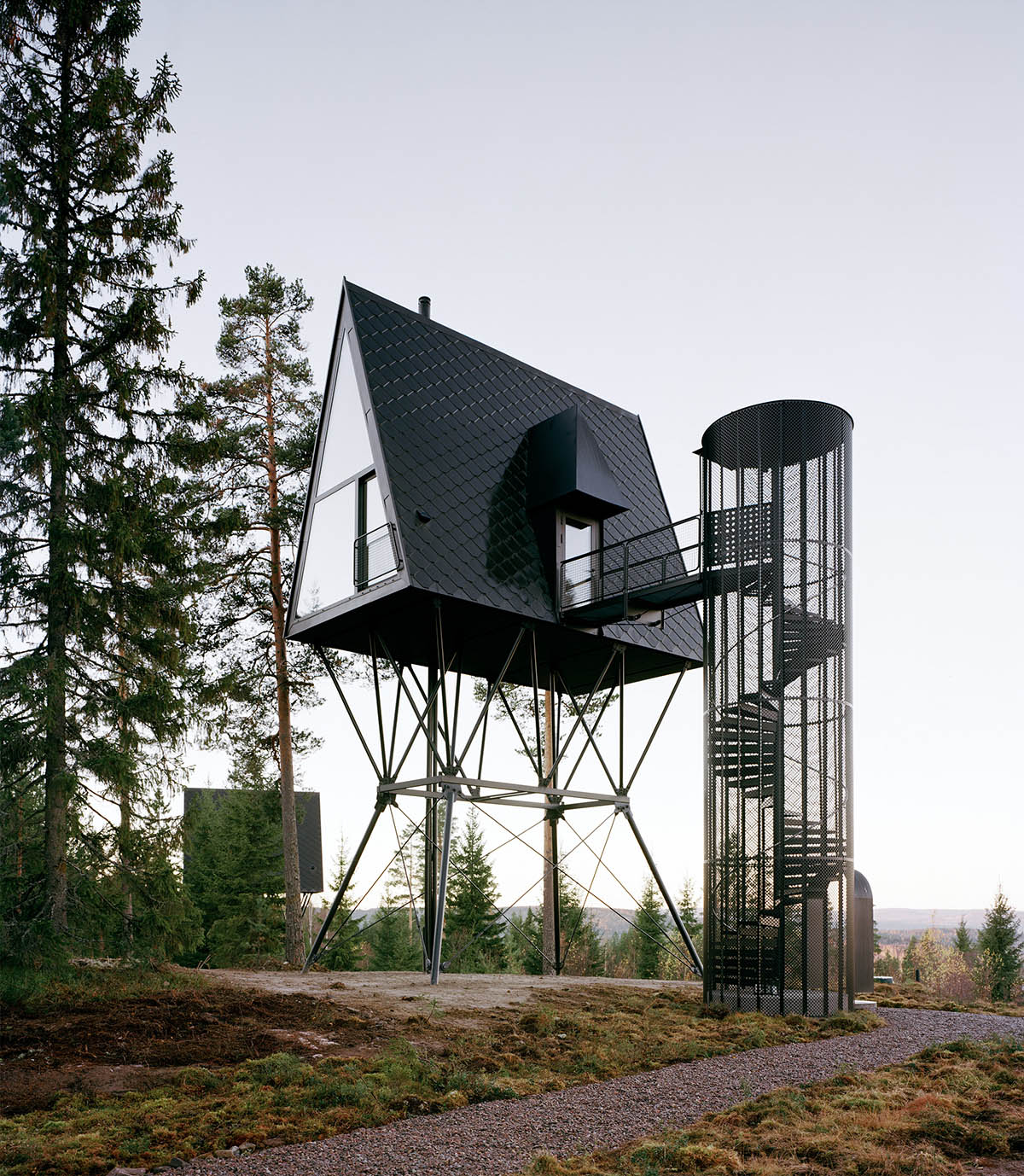 Oslo-based architect Espen Surnevik has completed retreat cabins lifted 8m from the ground with slim steel columns to overlook the the forest area of Finnskogen, a woodland in east Norway.

Called PAN Treetop Cabins, the metal cabins were developed for the client PAN, a project developed by a couple Kristian Rostad and Christine Mowinckel. They are living on a farm nearby and have built the cabins on their own property. 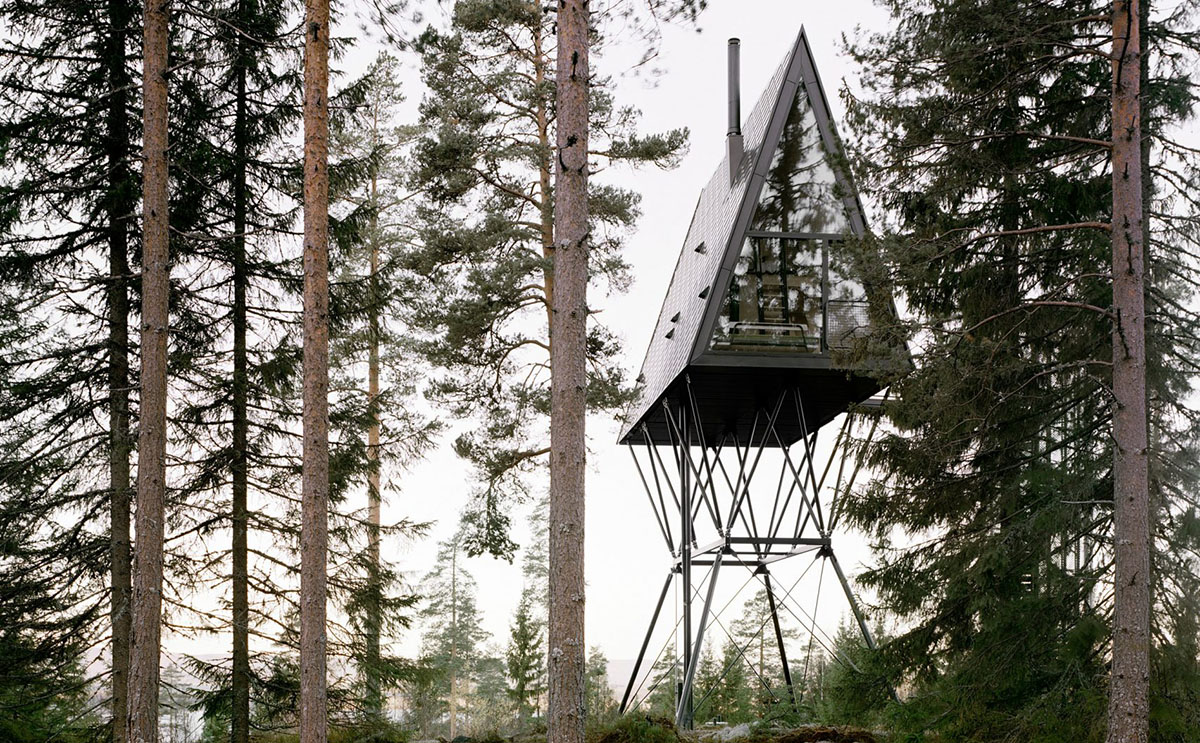 "The western parts of Norway are known for steep mountains and fjords, and the north of Norway have the best possibilities in the world for observing the aurora borealis, the northern light. But for a tourist, Norway has a lot more to offer," they explained their idea.

"The vision of the architect was to create something that would easily settle into the landscape without making a big change in the surrounding nature," PAN added.

The cabins were planned for people who want to experience life among the trees inside the Hedmark forests, at Finnskogen. The cabins are lifted up from the ground by using slim steel columns. 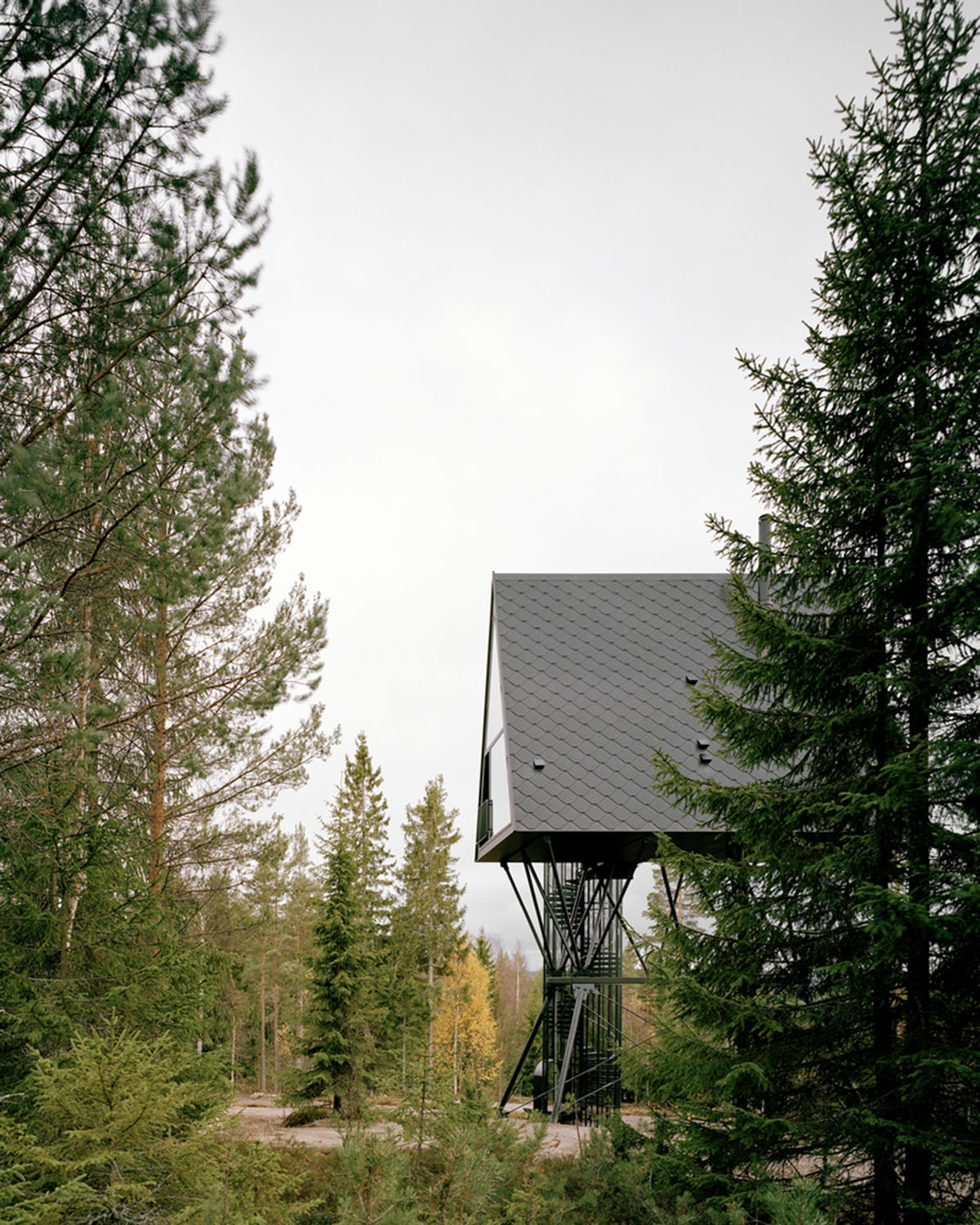 Each cabin is made of a small space at about 40-square-metre and they provide a space up to six accommodations. In the interior, they include bathroom, kitchen and living areas with fireplace. The modest size of the cabins gives the telescope's experience of living together in a community, but at the same time with the qualities of the dwelling. 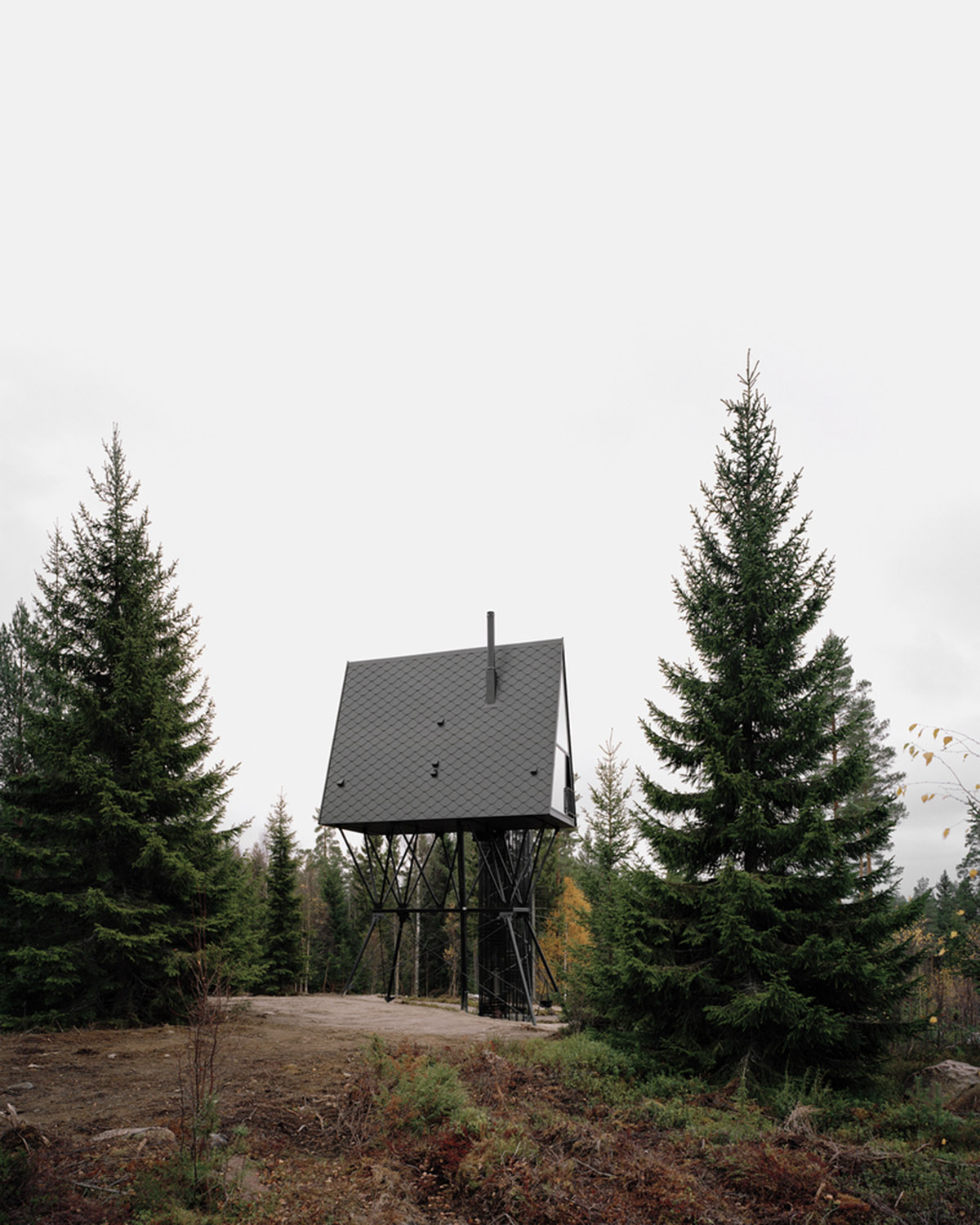 "The facility has a contemplative character in which the architecture will facilitate sensual experiences of both buildings and nature. The forest's "mystery" has been the subject of approach to the task and leading the design of all the various architectural elements," said the architect.

For their structural system and materials, the architect used matte black steel and various metal alloys throughout the plant to give all the cabins a subdued contrast to the lush forests. 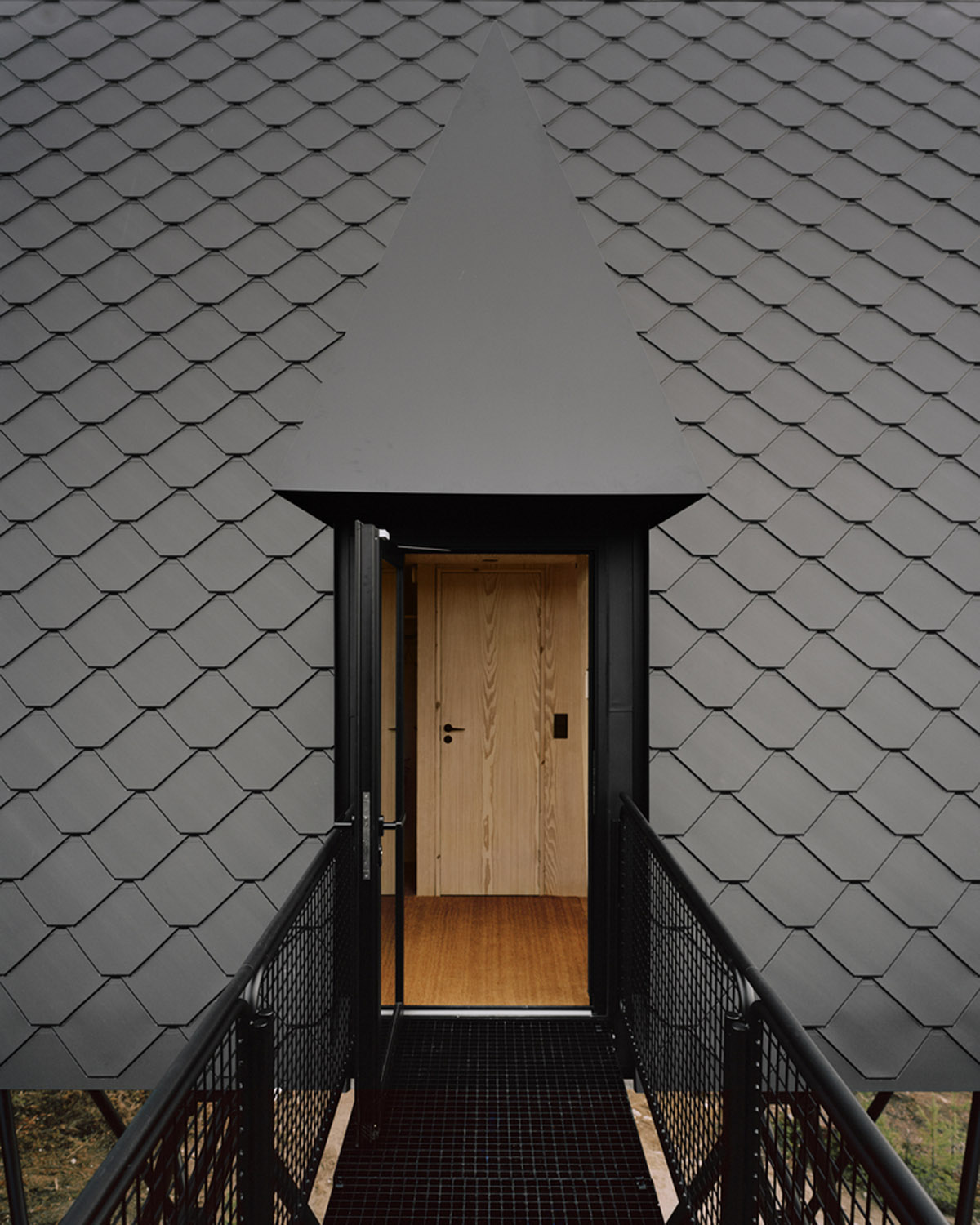 Inspired by Finnish Tove Jønsson's forest universe, the design of the cabins are based on the relationship between culture and nature. "While there is a contradiction between the cabins and the forest, the project has at the same time emerged from a sense of cohesion between the built space and landscape," added Surnevik. 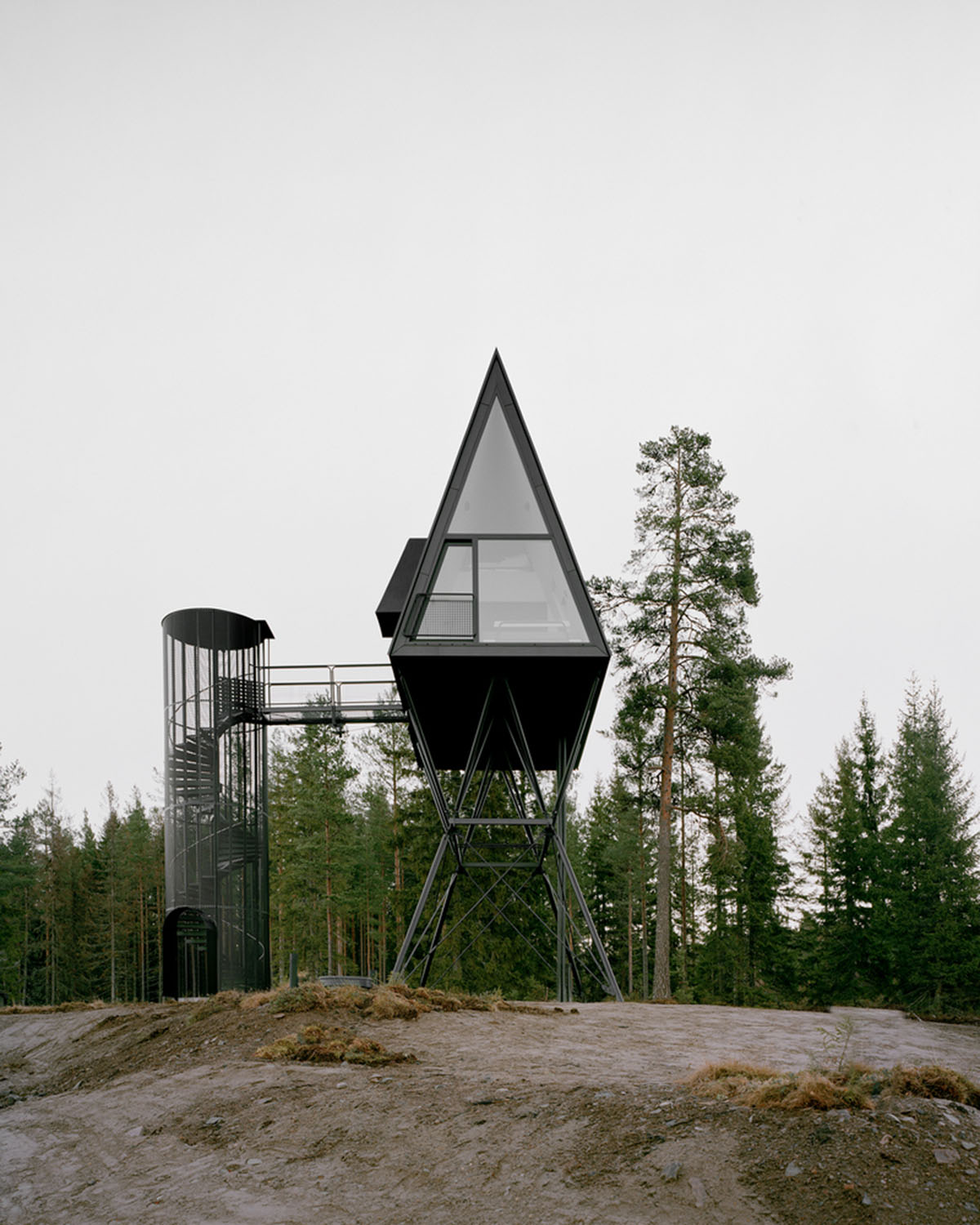 The architects used pine wood for floors, walls and furniture, while the small rooms and materials create a warm environment inside. Designed as a simple geometry, they are shaped like a steep salt roof that gives the small living rooms an extraordinary height of over five meters. By providing large glass windows for each, they provide visibility and proximity to the forest. 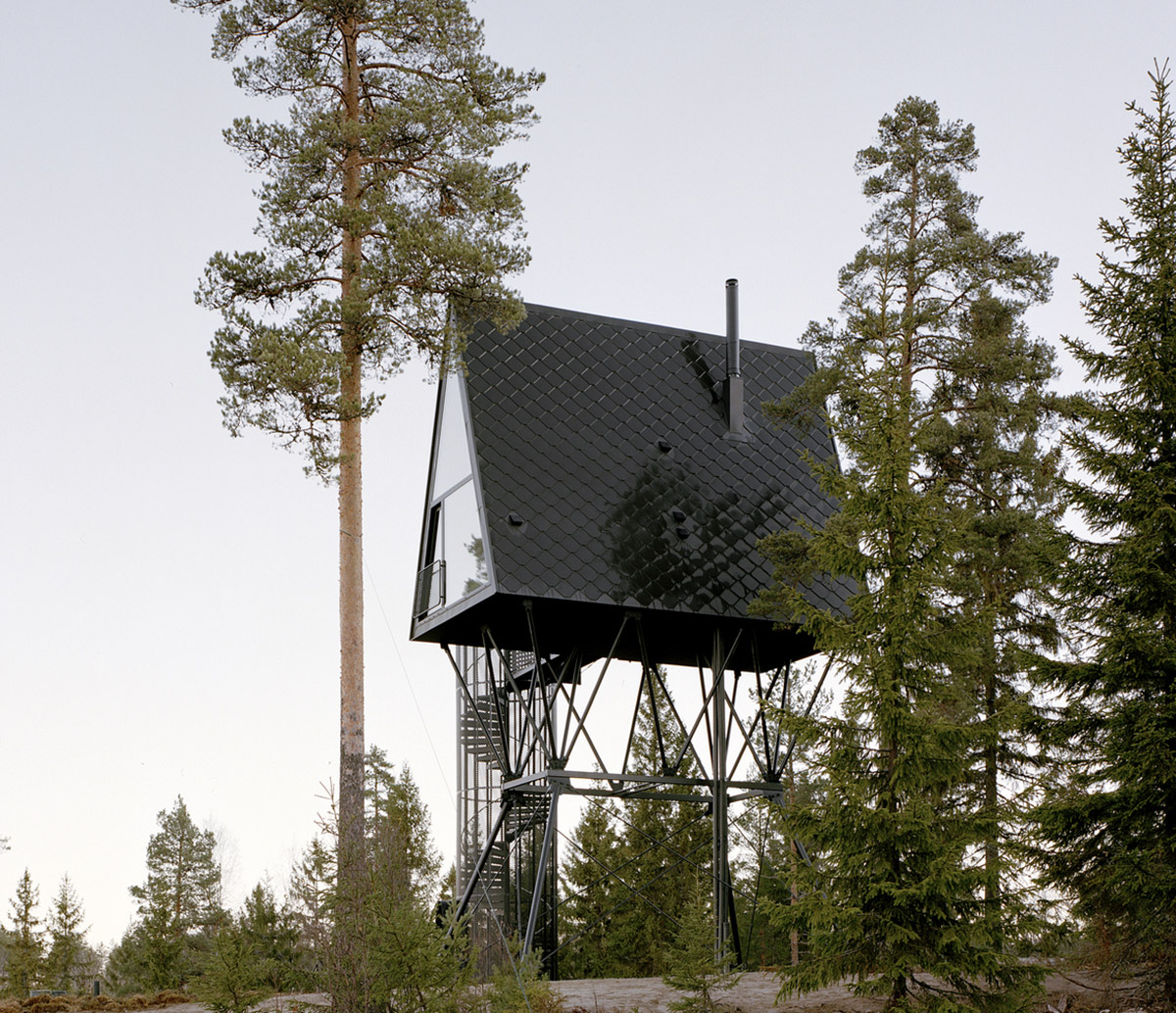 The designs are designed to make each cabin stand airy and light amongst the trees. It was important to minimize dimensions and study joints in a way that connects the cabins to the ground in a flimsy and structurally clear manner. 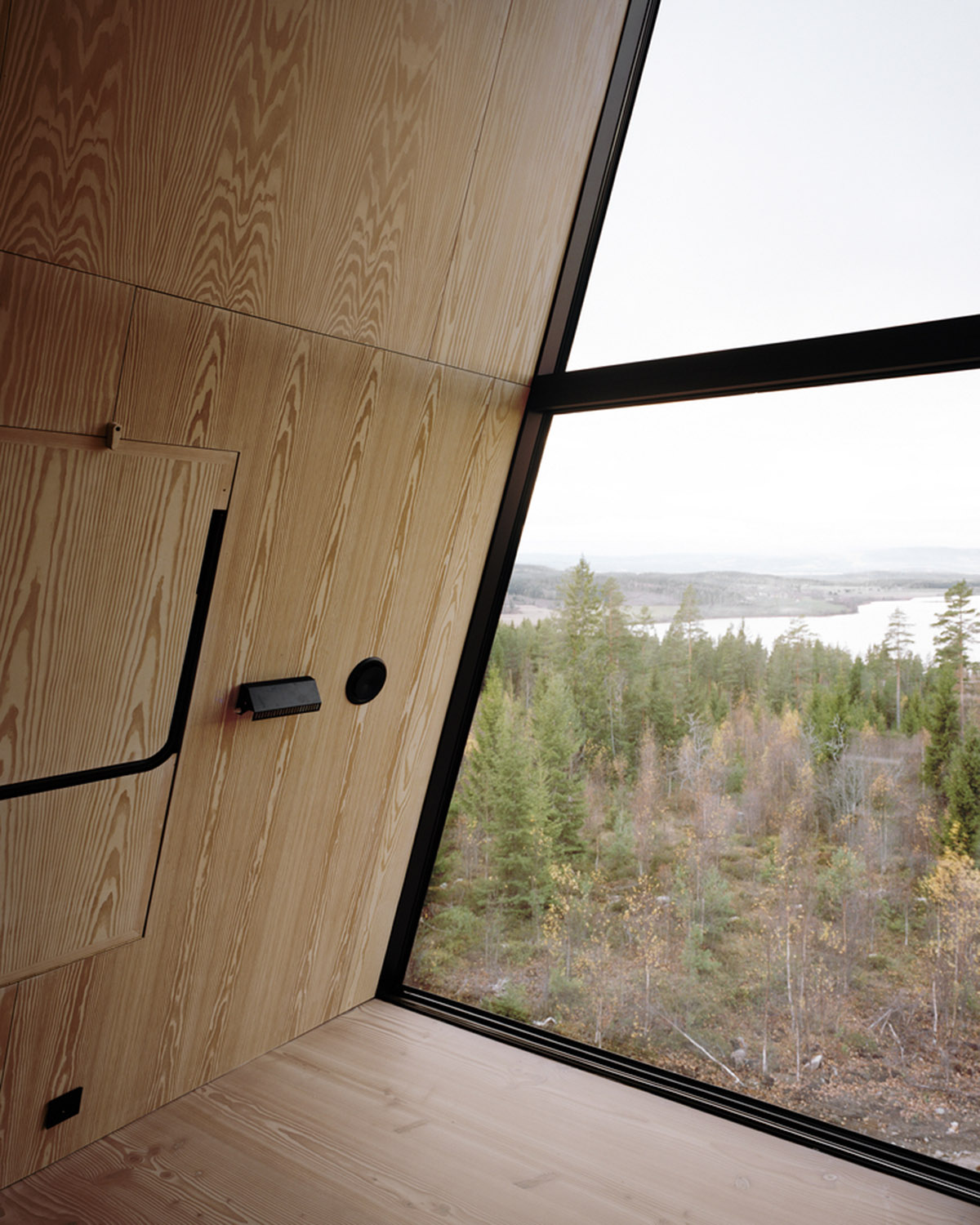 The cabins' stairs are constructed as a self-supporting tube of perforated metal sheets. These are again tied into a foundation that causes the over ten meter high stair towers to stabilize themselves without burdening the cabins.

A free-standing walkway is freely situated between the stair tower and the cabins. The cabins can be rented $1210 for 2 nights. 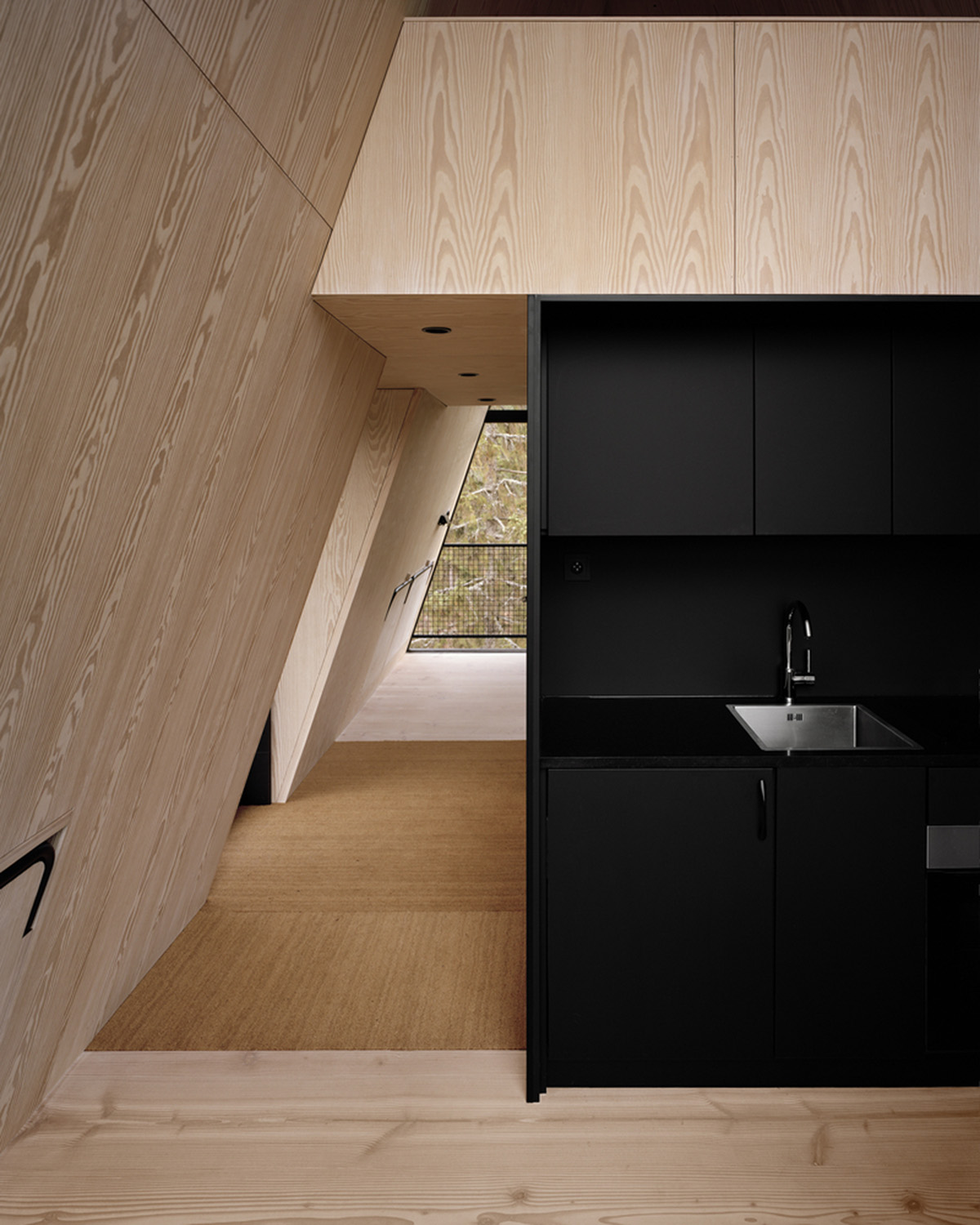 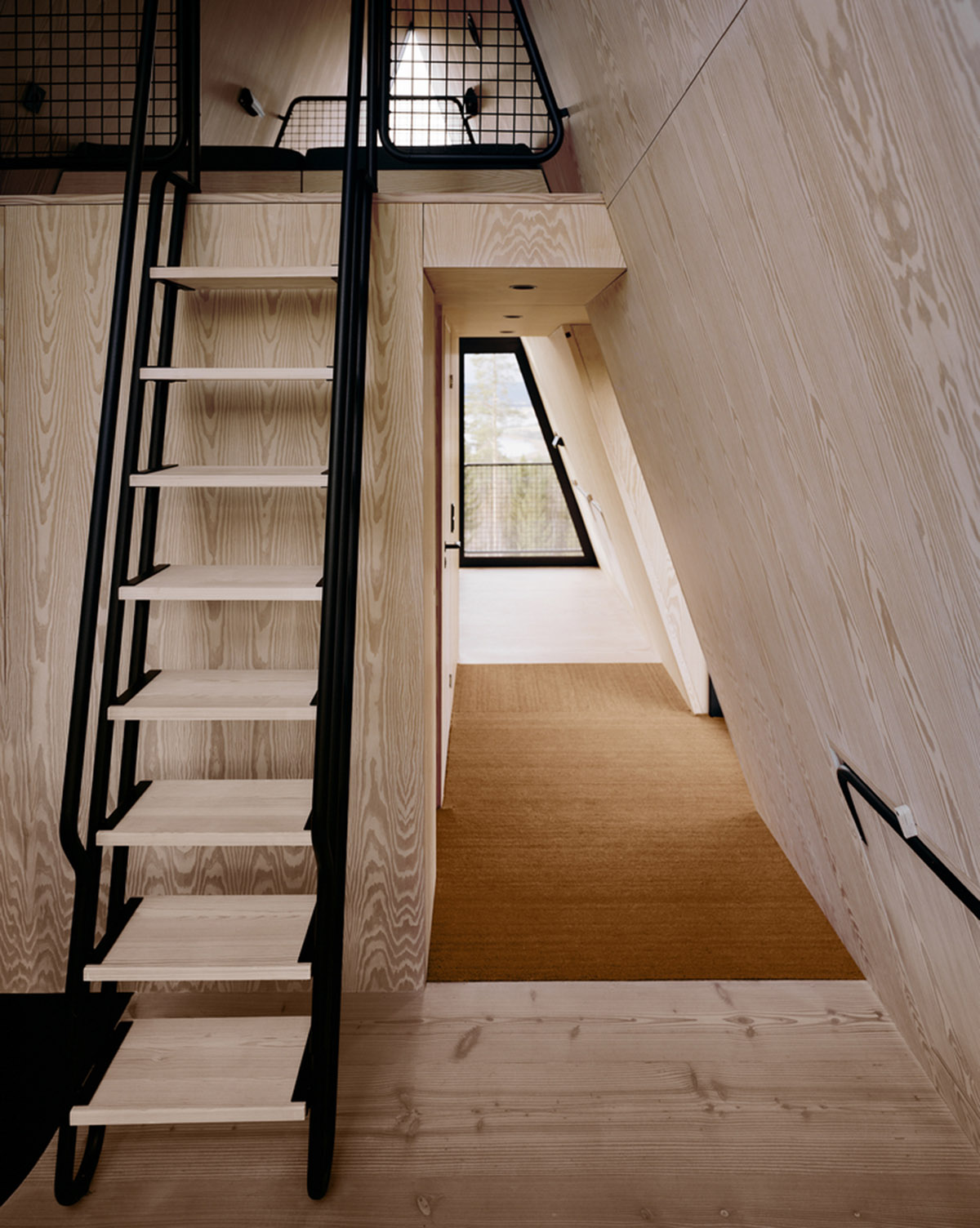 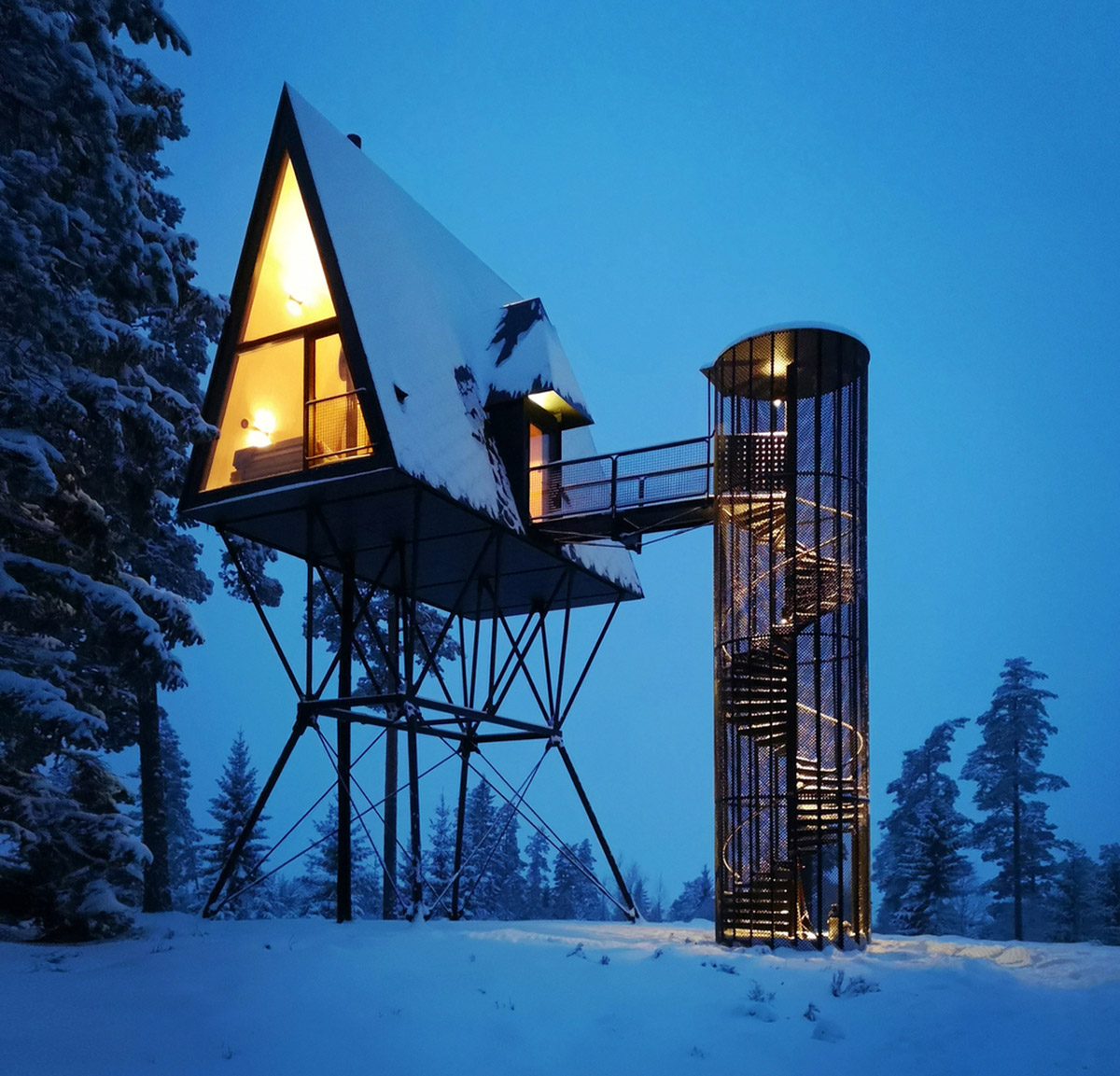 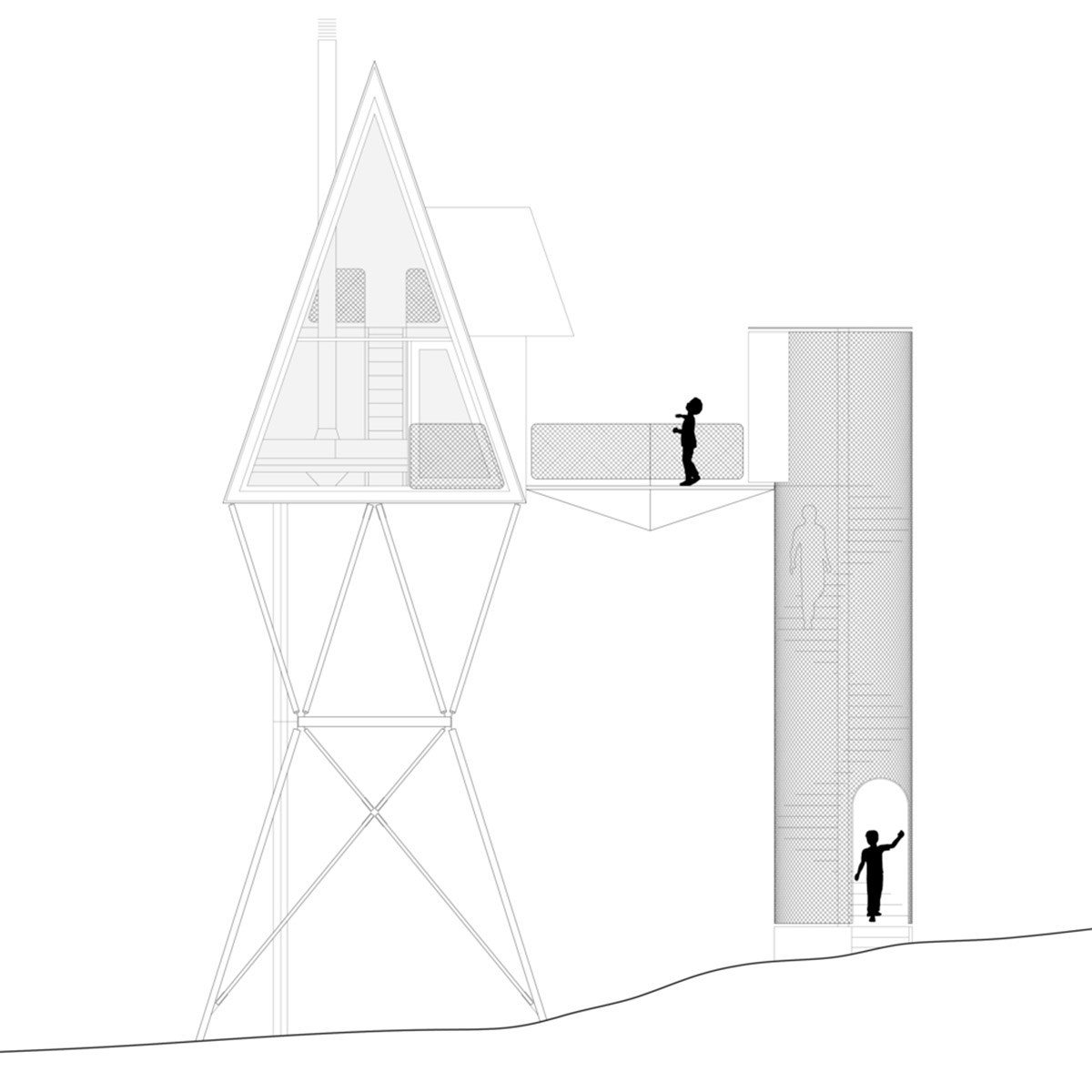 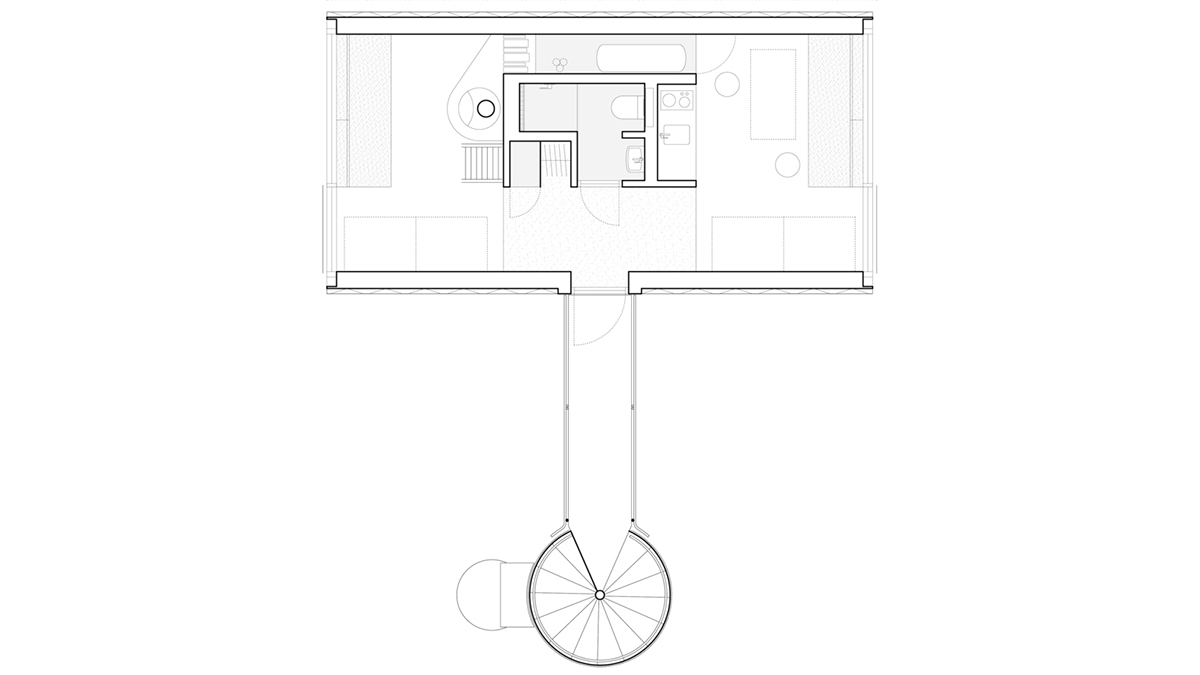