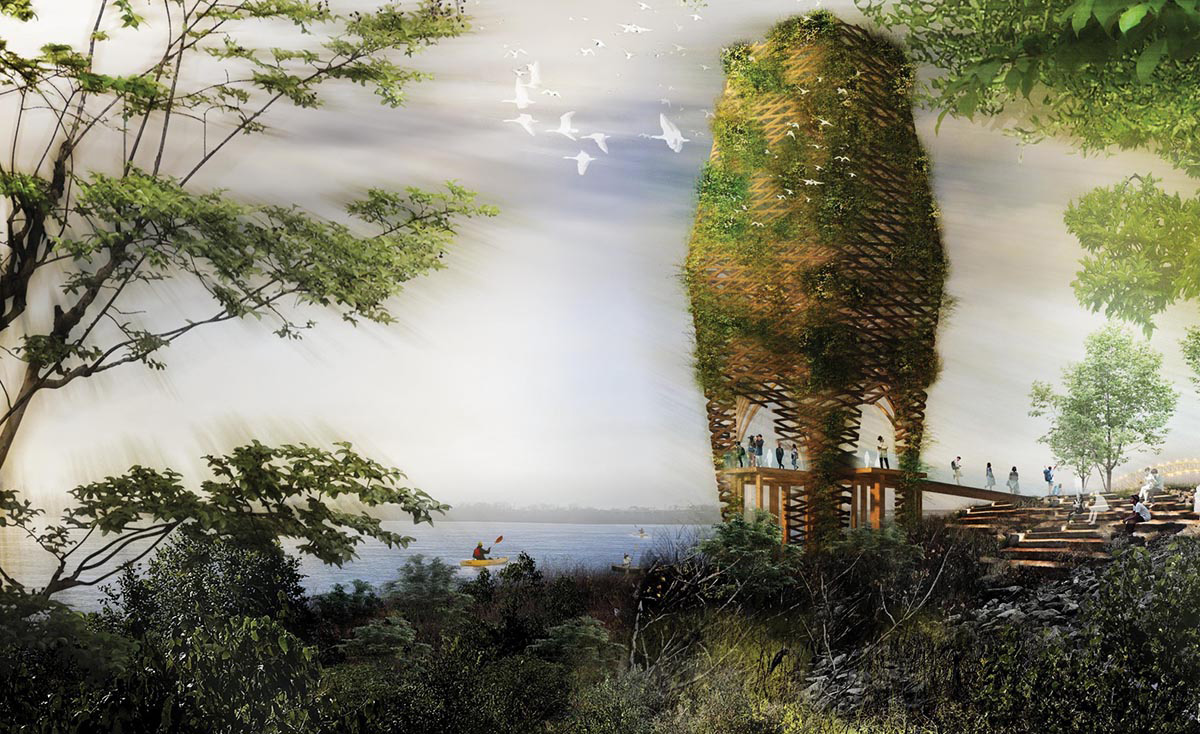 US-based architecture firm, Studio Gang and the NYC-based urban design and landscape architecture firm SCAPE have revealed the details regarding the six-mile master plan transformation of the Memphis Waterfront with the new Tom Lee Park.

The two, women-led firms, were selected for the Riverfront Project last year to provide a better connection between the river and the city. The master plan was driven by a concept based on three design principles: foster, restore, and connect.

"After hearing from more than 4,000 residents and visitors and learning from more than 100 years of riverfront planning, we're thrilled to share a design direction that Memphians can call theirs," said partnership CEO and president Carol Coletta. 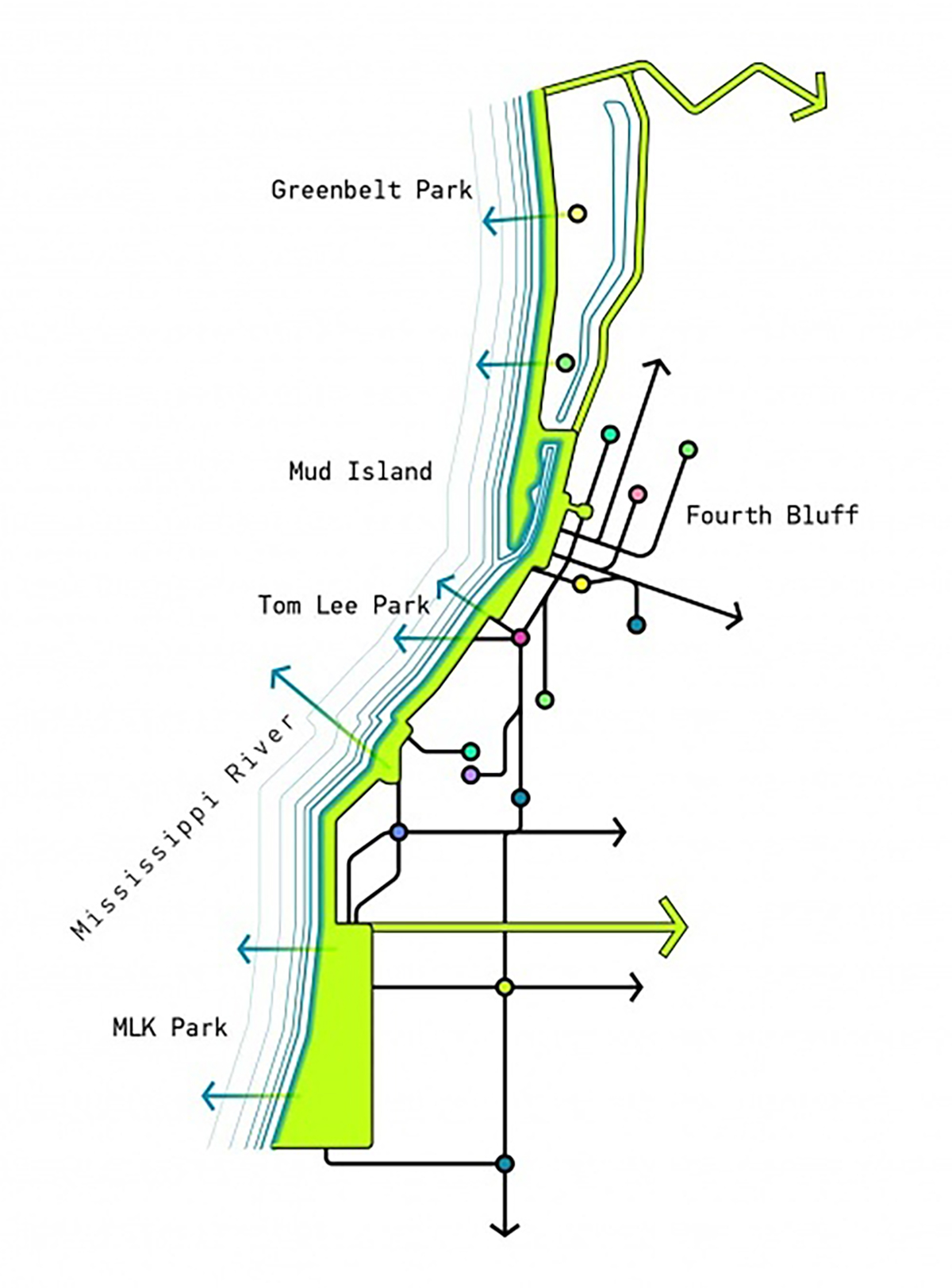 Tom Lee Park's design is inspired by the Mississippi River while the architecture floating above the landscape is inspired by historic structures that once dotted the riverfront. The park is further divided into four zones that are defined as the topography, vegetation, pathways, and architecture. Inspired by River Basin, these four zones flow together to create a stencil for the civic and ecological revitalization of the city’s downtown area. 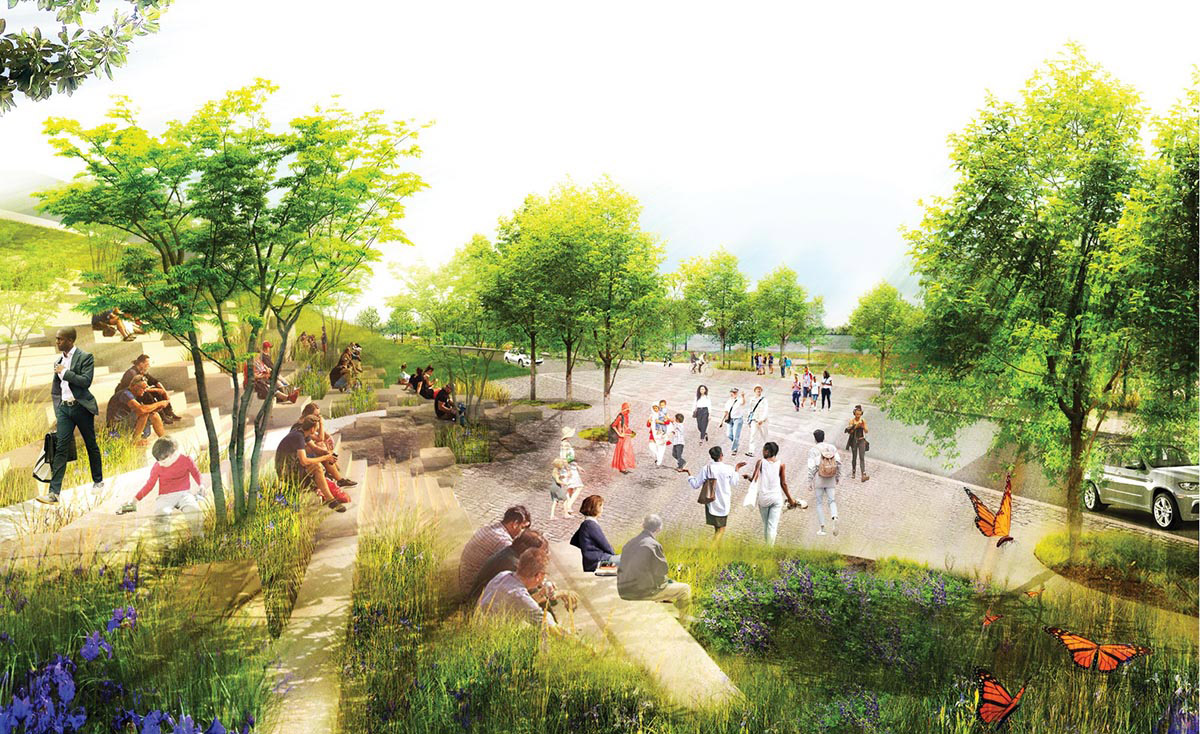 A terraced, universally-accessible pathway flows down the bluff to connect downtown Memphis to the new Tom Lee Park from Beale Street.

"We've designed the architecture to float in the landscape like vessels on the river, creating a park that uniquely reflects the changing nature of the Mississippi River and the city along its banks," said Jeanne Gang, Founding Principal of Studio Gang.

"The dynamic forms of the Mississippi River Basin itself inspired a series of rooms in the park, creating a unique template for diverse civic spaces and ecological revitalisation," said Kate Orff, Founder and Principal of SCAPE. 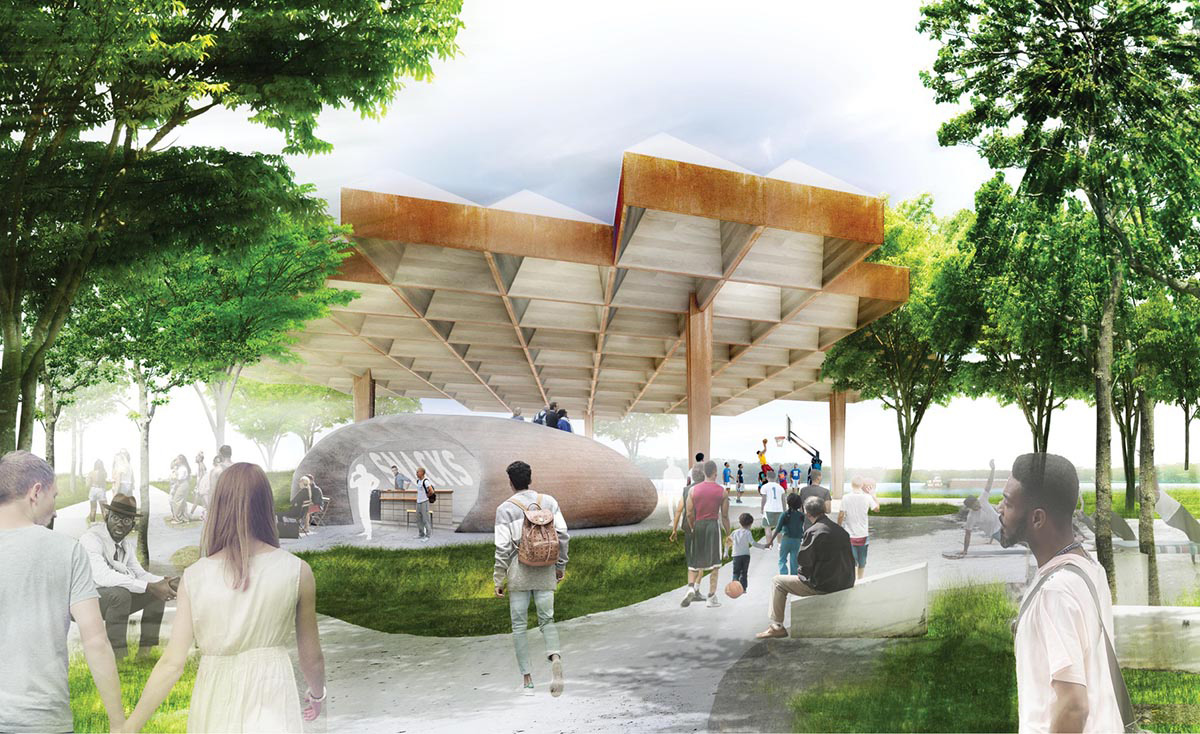 Near the river’s edge, a central canopy floats above a set of Activity Courts, framing the river beyond and protecting the courts below that can be used for basketball and other sports, as well as events like concerts or weddings.

"The Gateway" will serve as a new connection that will link downtown Memphis to the riverfront. A new entry plaza will house public gatherings, art installations, and festival tents, accessed via a universally-accessible pathway along Beale Street.

"The Riffle" will be defined by a dynamic topography that will shape the areas for play and relaxation. A signature canopy will shade activity courts designed for sports and special events. 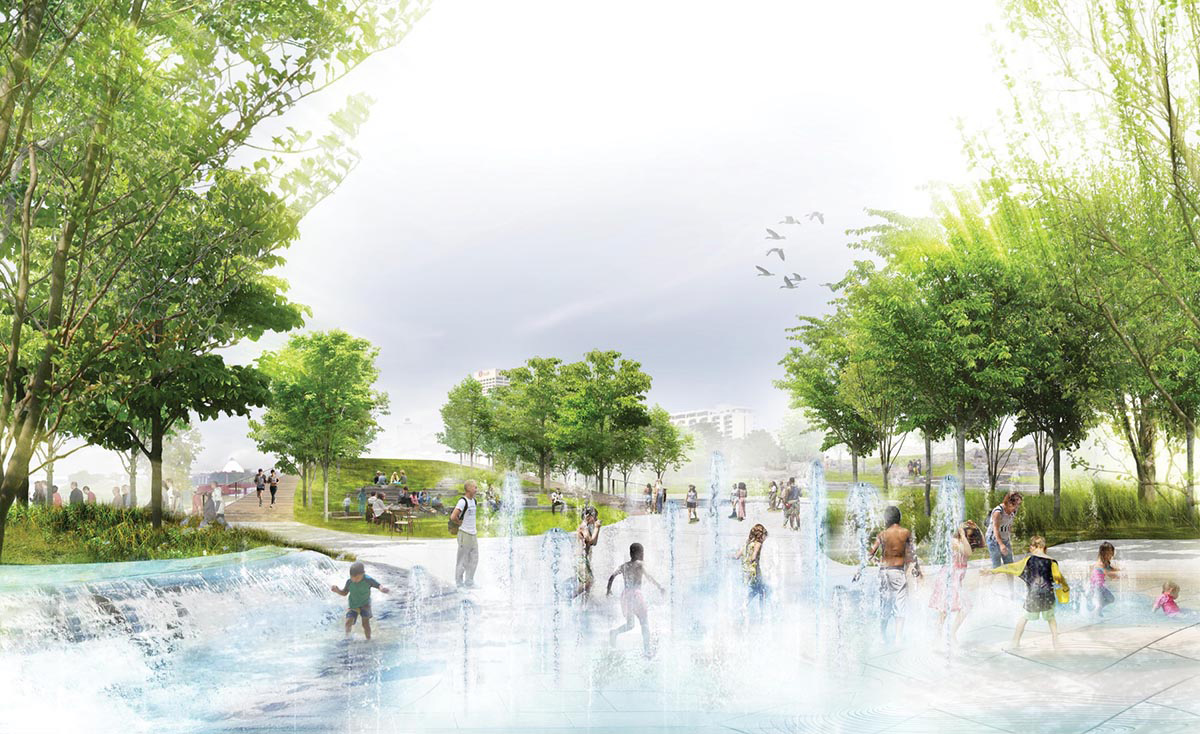 A welcoming entry plaza greets visitors and orients them to a range of riverfront and park activities, from boat cruises to basketball. In the heart of the plaza, water features and bright swaths of native plants evoke the movement of the river and provide photo-worthy moments for all ages.

"The Pool" will offer a series of open lawns that provide space for field activities and events.

"The Tailout" will sit at the southern end of the park, where the recreation paths will lead to outdoor learning and play areas.

"The Habitat Tower" will offer an attractive structure for birds to nest and rest, and a gathering space for visitors to absorb views of the Mississippi. 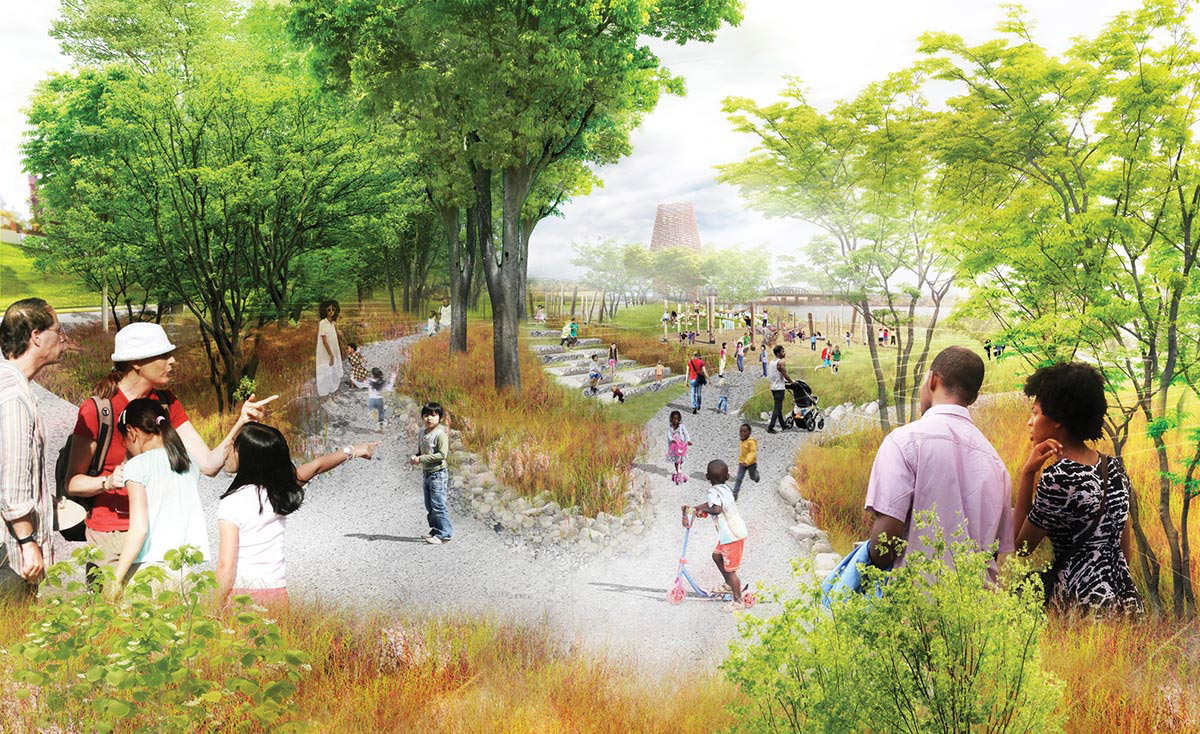 An outdoor classroom, experimental garden, and other hands-on opportunities give kids a chance to connect with and learn about the unique ecology of the Mississippi River.

With a focus on human and environmental health, the scheme will include a one-mile fitness loop with workout equipment, as well as systems to mitigate water pollution, provide habitat for wildlife, harvest energy with solar panels, and collect stormwater for reuse.

Construction of the scheme is expected to begin in June 2019, with completion by the end of 2020.