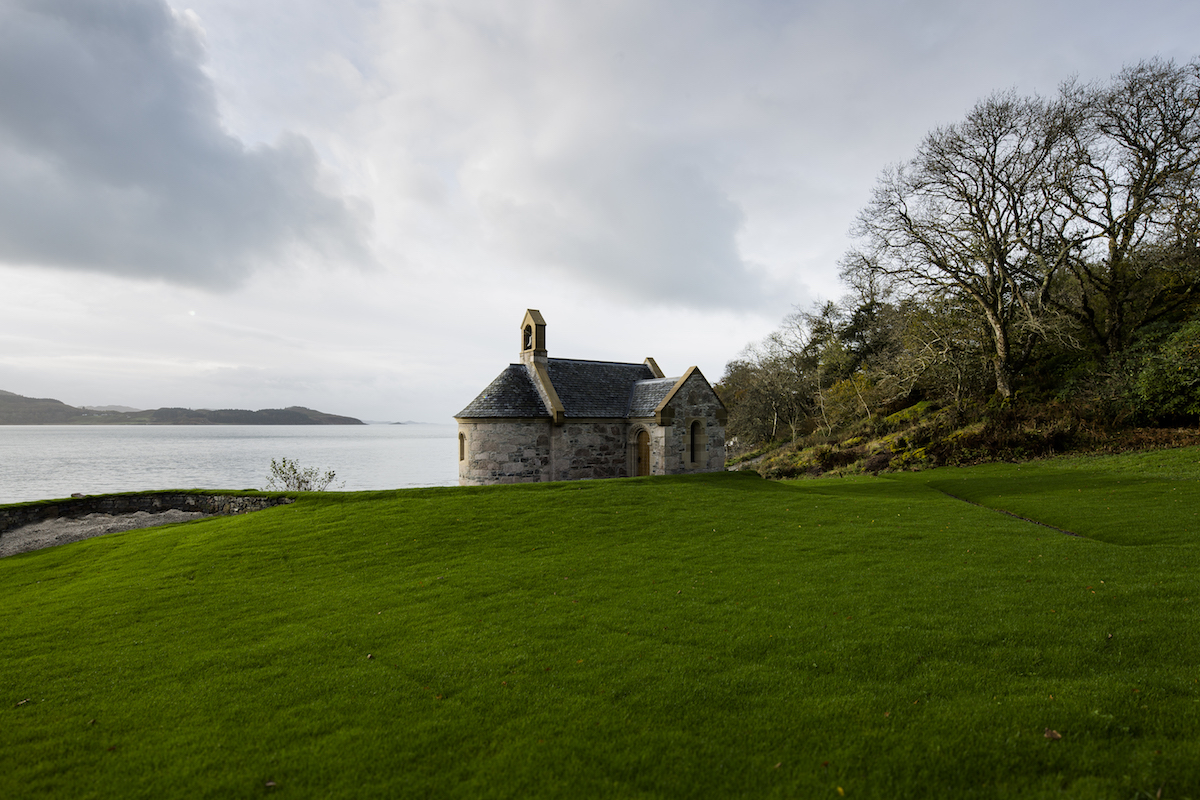 Influenced by the monastic buildings on Iona Island of Scotland, Edinburgh’s GLM, one of Scotland’s most respected consultancies - with an experienced team of architects, building surveyors and project managers - has commissioned to design a new-build private chapel on the coastal estate in Argyll. 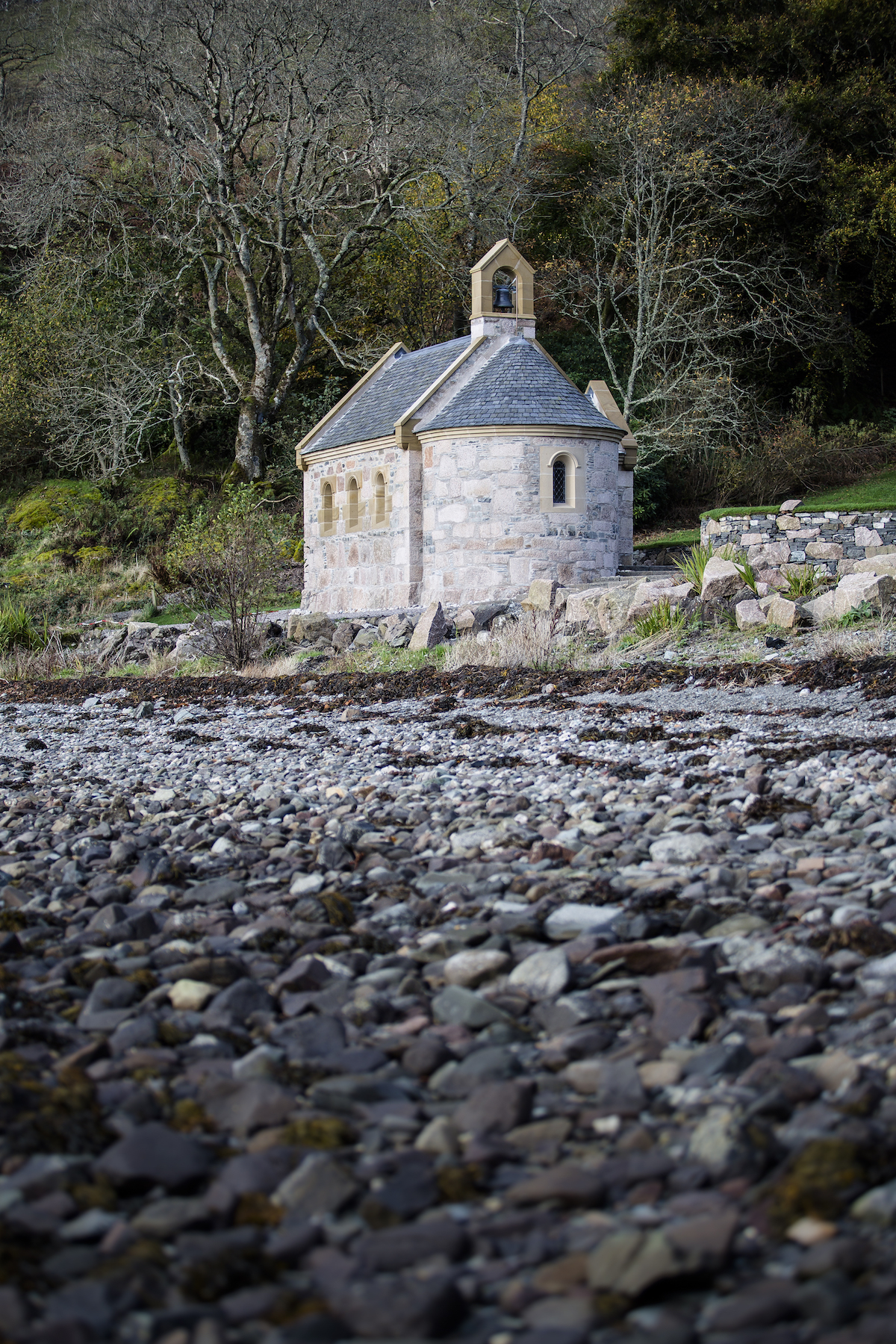 This once-in-a-lifetime commission quality project was paramount without all the usual compromises.

Neil McAllister, the project architect, worked closely with the landowner to develop the brief, inspired by both the abbey buildings on the nearby Isle of Iona and the diminutive St Margaret’s Chapel at Edinburgh Castle. The Chapel was to be dedicated to the Celtic Saint, Comghan, after whom the estate is named.

"It has been a joy and a privilege that many architects will never get to be able to design a building like this and not have to compromise on everything," said Neil McAlister at GLM. 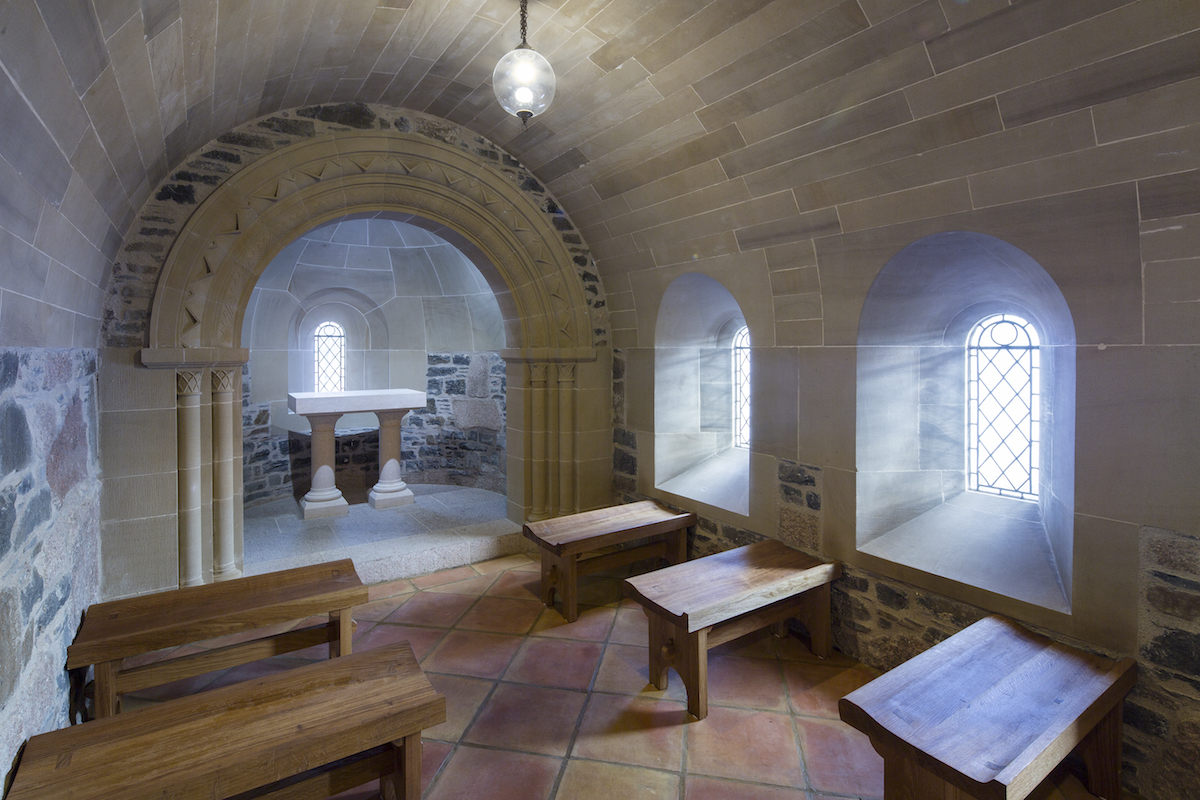 The chapel is a stand-alone building ancillary to the main house on the Kilchoan Estate. The site is beside the sea on a track between the house and a jetty and backs onto woodland. A small garden creates a transition zone before entering through a porch at the Northwest corner of the chapel.

The building consists of simple geometric forms, massive walls and small windows, which contrasted with areas of intricate decoration. The chapel comes from an architectural tradition that is described, like the chapels on Iona, as Romanesque. Yet it also celebrates an earlier tradition dating back to the early days of Celtic Christianity to which the Saint Comghan himself belonged.

The design uses simple geometric proportions of a square, circle and golden rectangle. It also makes use of the symbolic numbers of three that is the Trinity and seven that means as the creation, perfection and Sabbath rest. 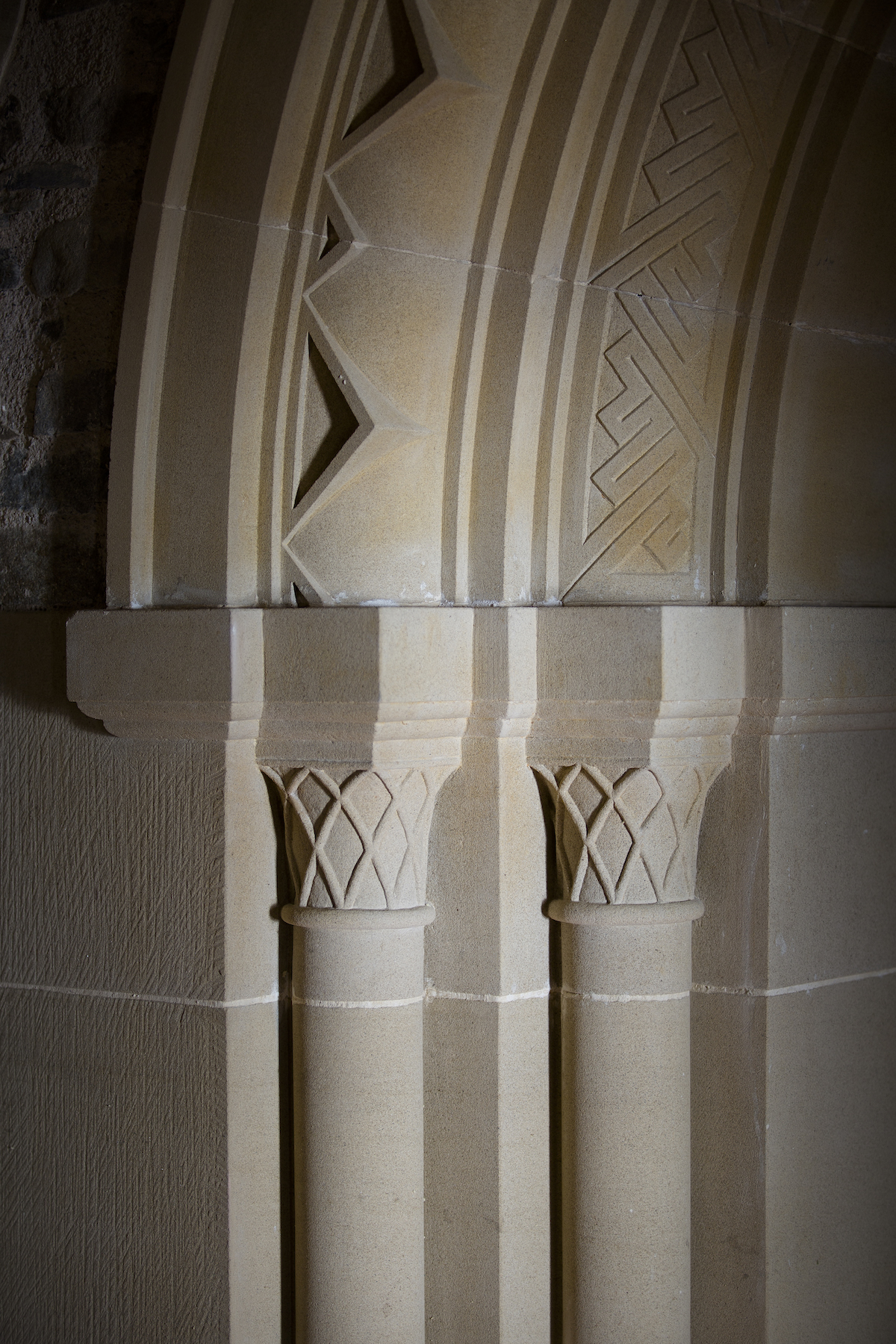 The simple geometry is contrasted with carved detail to pick out the entrance and chancel arch in a mix of Romanesque and Celtic patterns. Seen in the excellentstone carving by Zenon Przelasa of Forth Stone which picks out the entrance andchancel arch; this 21st-century design is therefore unapologetically eclectic incombining the chevrons and stylized foliage designs typical of Romanesque architecture with Celtic key patterns and knot-work.

The chapel is of traditional stone construction. Its solid walls are built of granite from the Tormore quarry on the Ross of Mull and which was the same stone that was used on Iona. The self- supporting stone barrel vault and a domed apse are the structural system of the chapel. 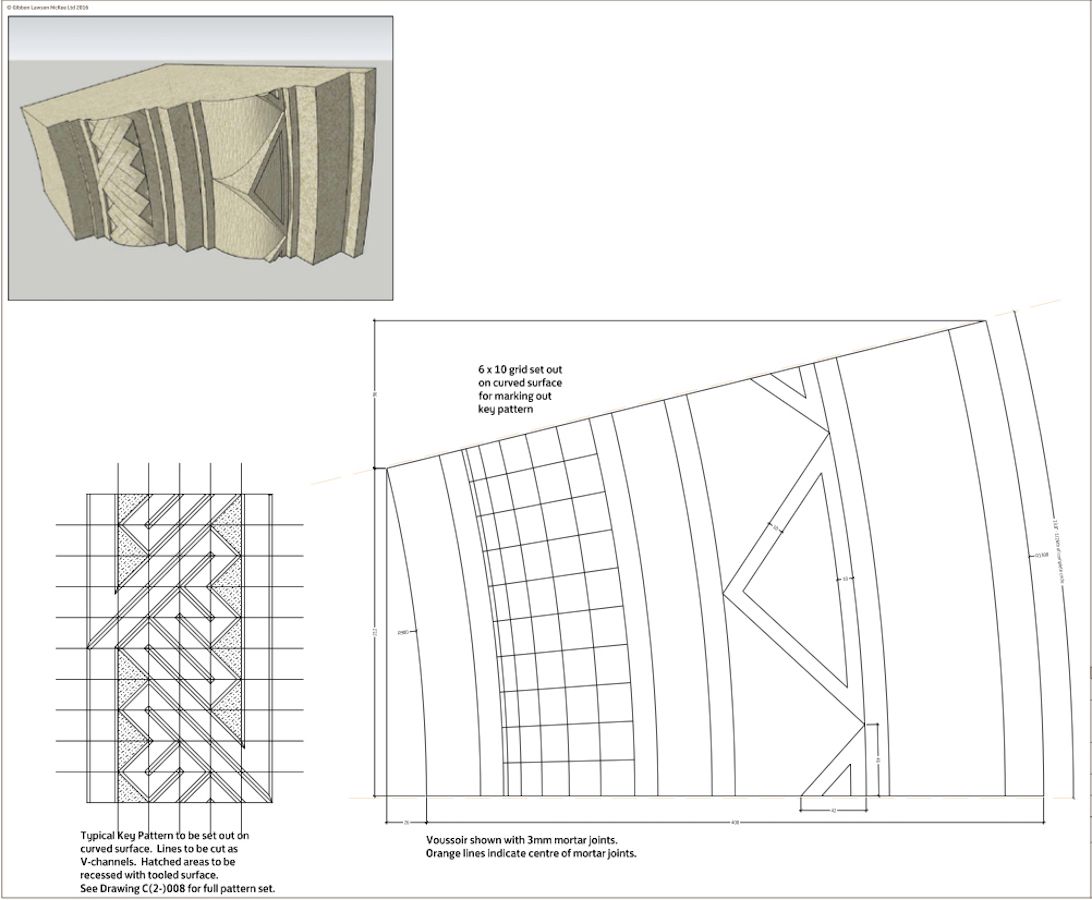 The sandstone was dressed and hand carved off-site, while the granite was split and dressed on site that the whole process would have been familiar to a medieval mason. He wouldn’t have been assisted by modern power tools, however, but would have appreciated the enclosed scaffold that allowed work to continue in all weathers.

McAlister explained that "each cut and dressed stone, including the complex stones of the half dome of the chancel with intersecting curved surfaces, was drawn in 3d and full-scale templates produced for the stone masons to follow."

The roof is of reclaimed slates from the former Easdale quarries that is situated about five miles from the site. Its bell-cote is one of the last bells to come out of the famous Whitechapel Bell Foundry before they closed.

The only concessions to modernity are electric lighting and a heating mat in the floor, although the latter is more for fabric protection than human comfort. 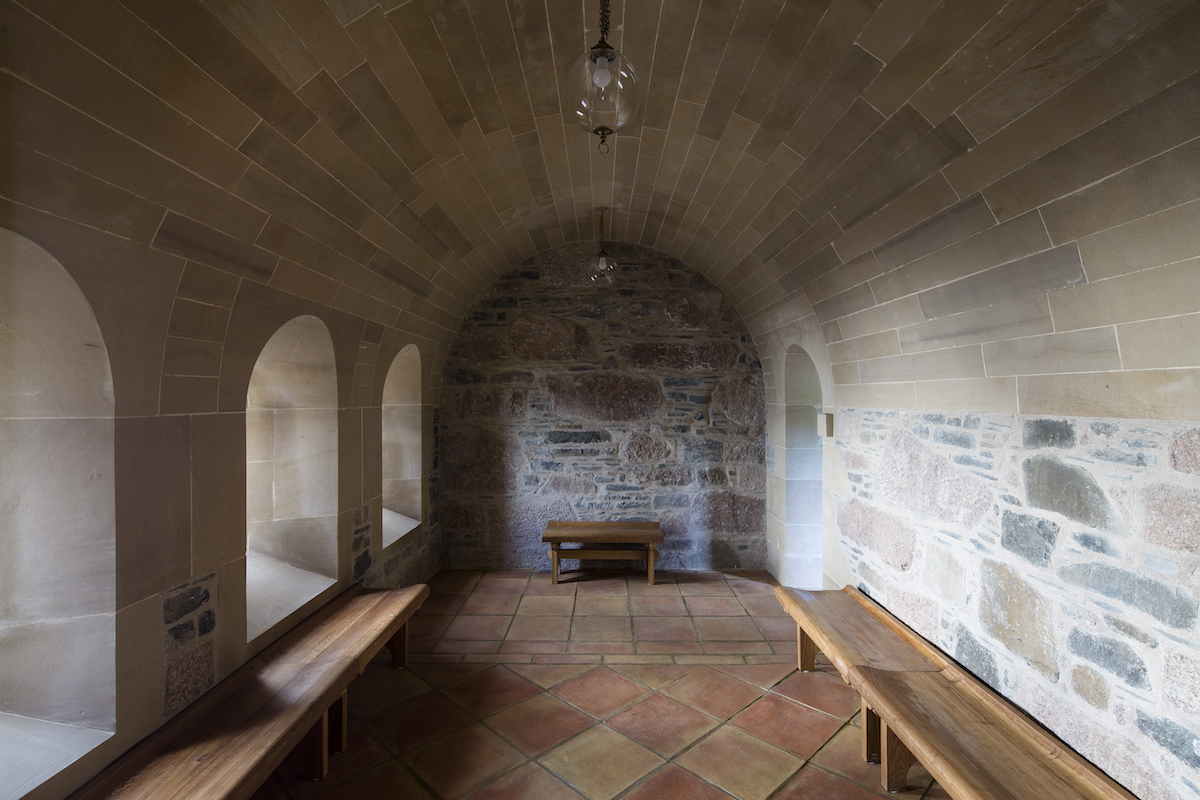 The seating - no more than about 14 - in the chapel is modeled on that of St. Margaret's with simple oak benches that placed either against the walls in amonastic format or at right angles for a more conventional layout with a central aisle.

What would be “authentic” flooring was the subject of much debate. The decision was to use more Ross of Mull granite slabs in the chancel to set it apart from the nave; that is covered with large handmade terracotta tiles finished in linseed oil and beeswax. Their lovely warm colour and subtle sheen complement the stonework and oak furniture. 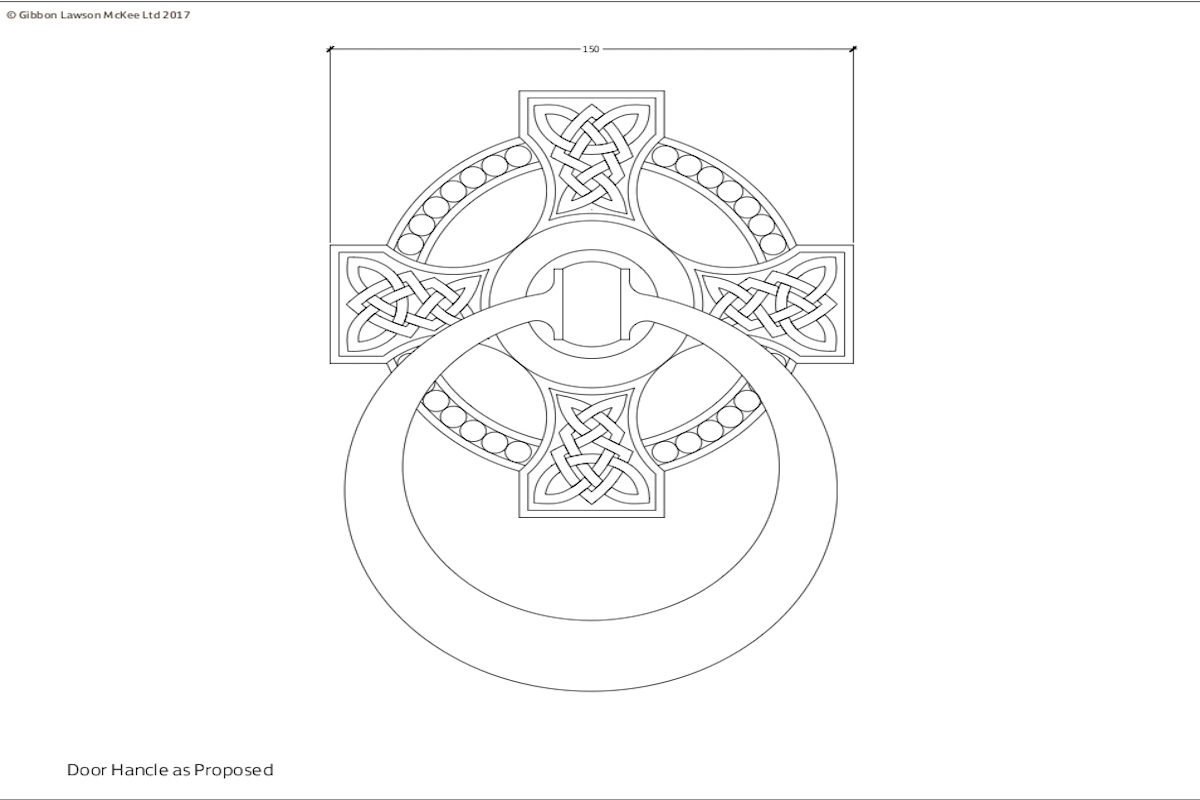 While the team’s previous restoration experience gave it insight into individual parts of the project, to build a structure from the ground up primarily using traditional methods of construction was something new, with no obvious precedent to gauge how long it would take or how much it would cost.

The timescale for completion of the building work was largely determined by the speed by which the stone could be carved and made ready to put in place. In total construction took around 15 months but as the buildings, it takes to lead from, the finished building has been designed and built to be last. 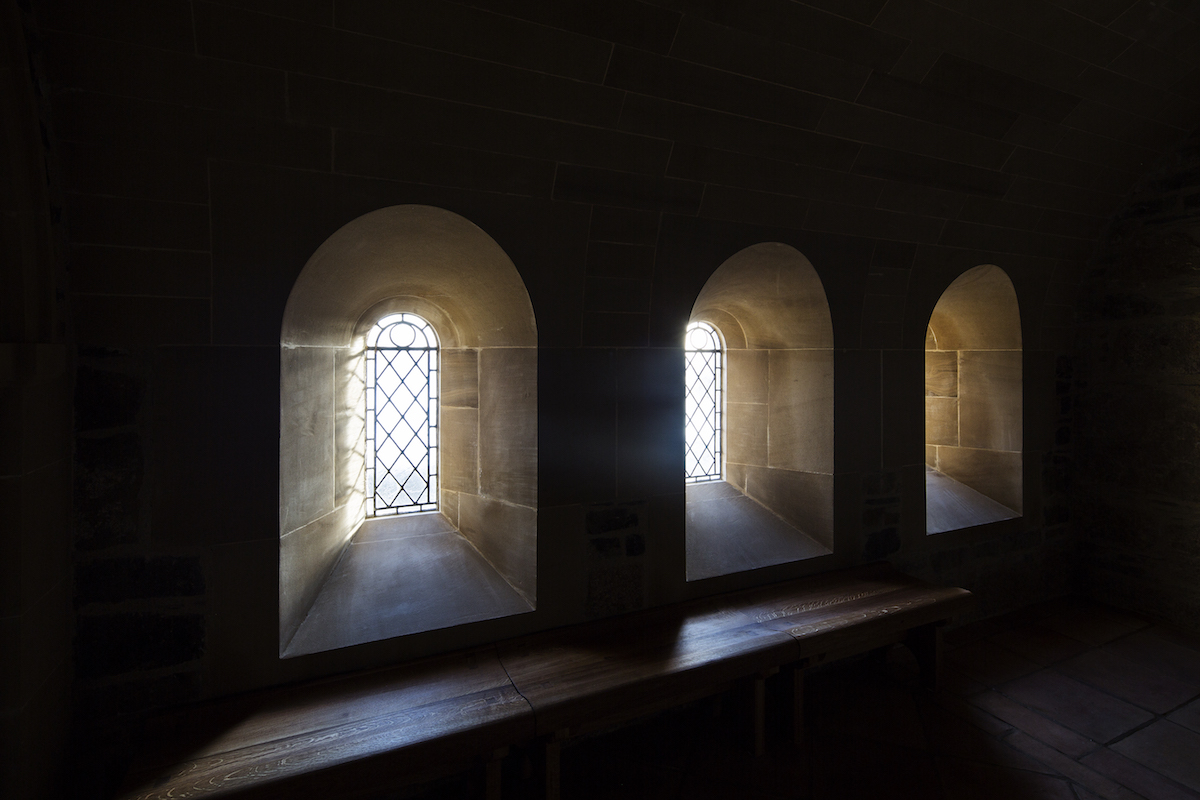 At present, the chapel’s obvious newness seems something of a contrast with the traditions that have been encompassed within its design and construction Whilst, a few wild west-coast winters will quickly make it settle timelessly into the landscape.

Intricate carving picks out the entrance and chancel arch and further detail is picked out in the custom bronze door handles which tell the story of St Comghan — an Irish king become a monk- in the royal torch ring handles and back-plates inspired by the St John’s cross on Iona. This building is a place of contemplation and worship for generations to come.

Hopefully, the story of the design and construction will be just a small part of the history of this chapel. The client recognizes that possession of the land beneath those granite slabs and terracotta tiles is transitory. As the client stated, "no one can really own a chapel". Like its historical forebears, this building has been designed to last and will stand asa place of quiet contemplation and worship for the enjoyment of generations to come. 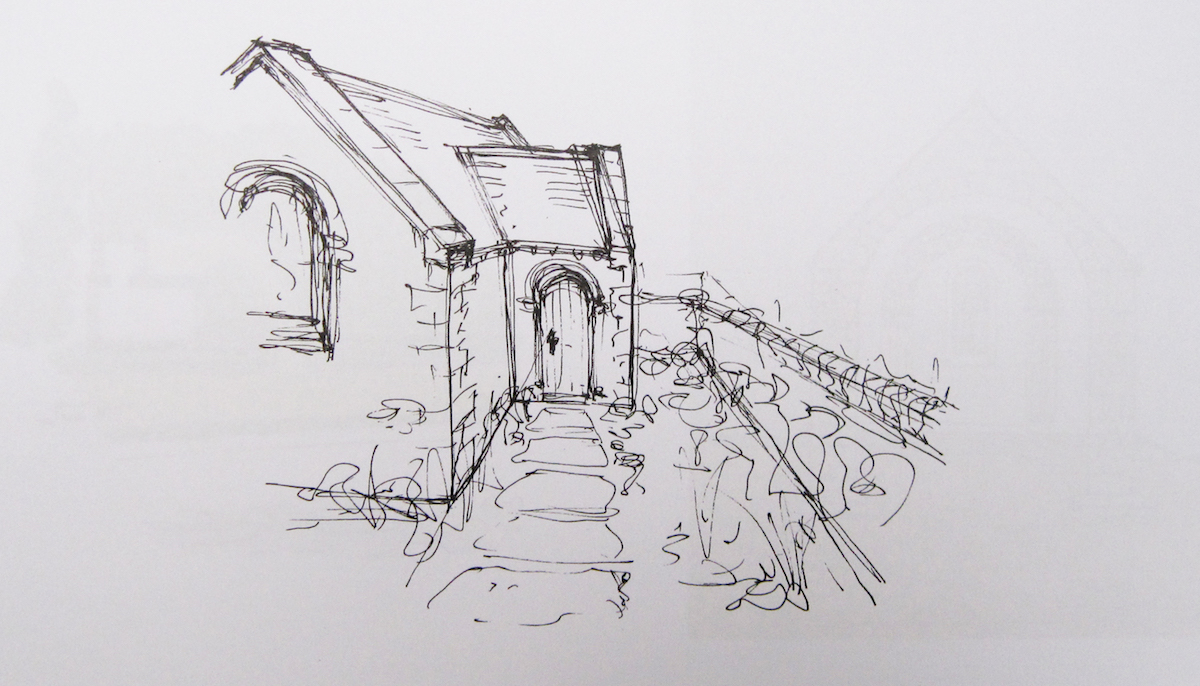 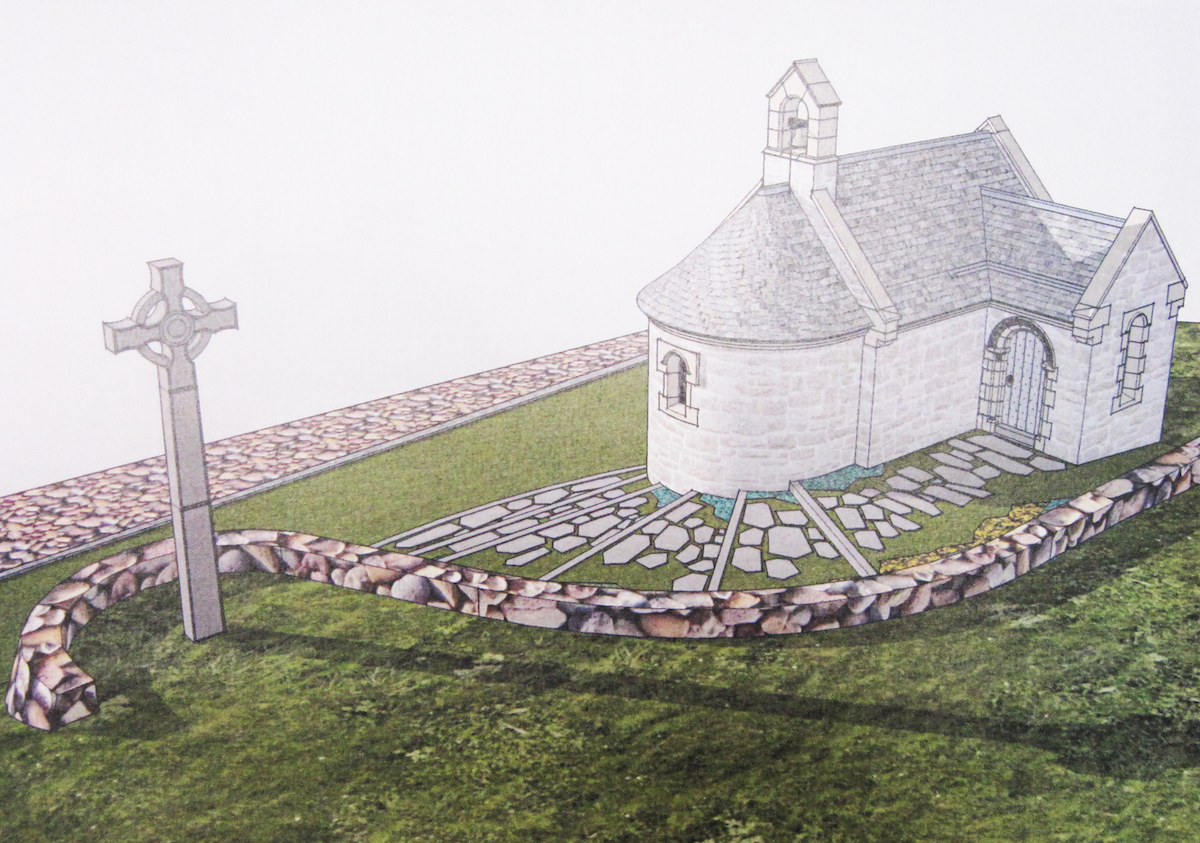 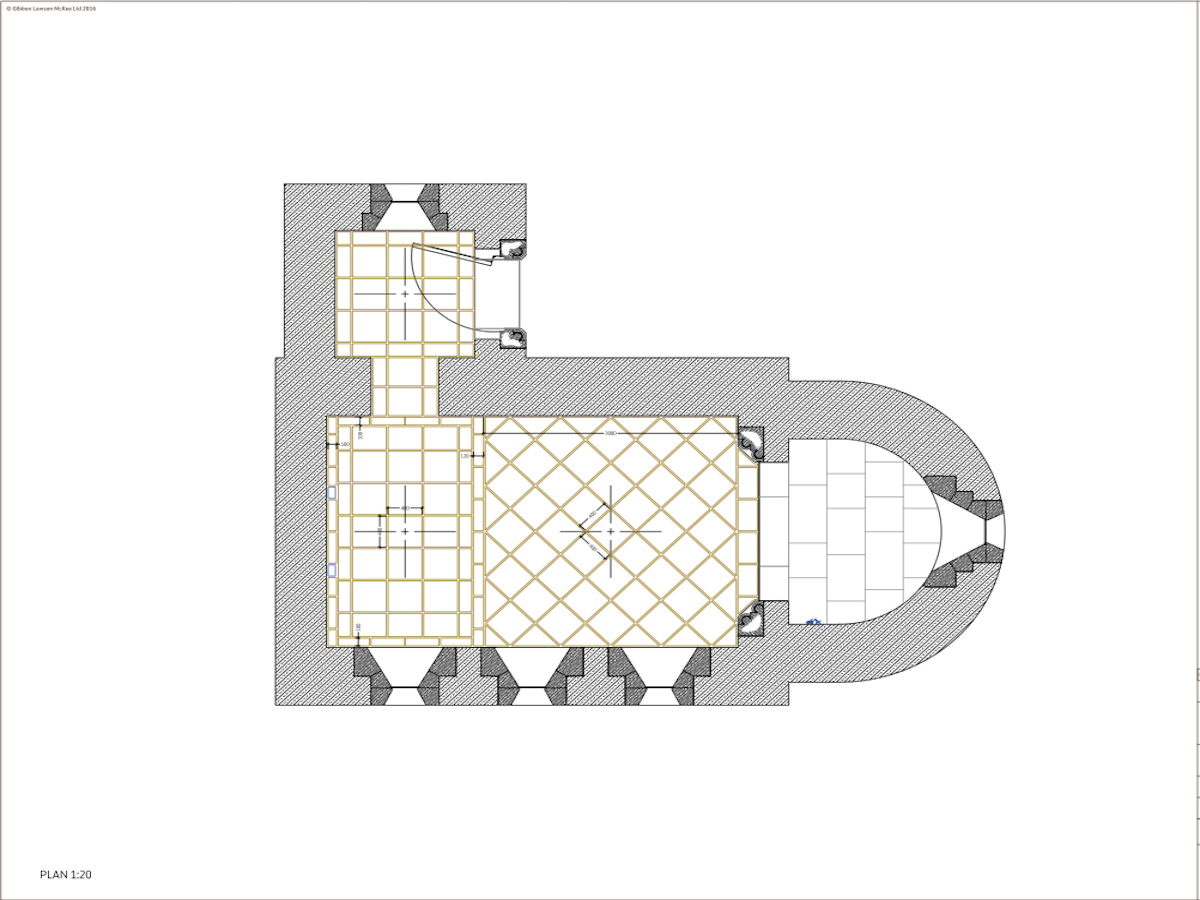 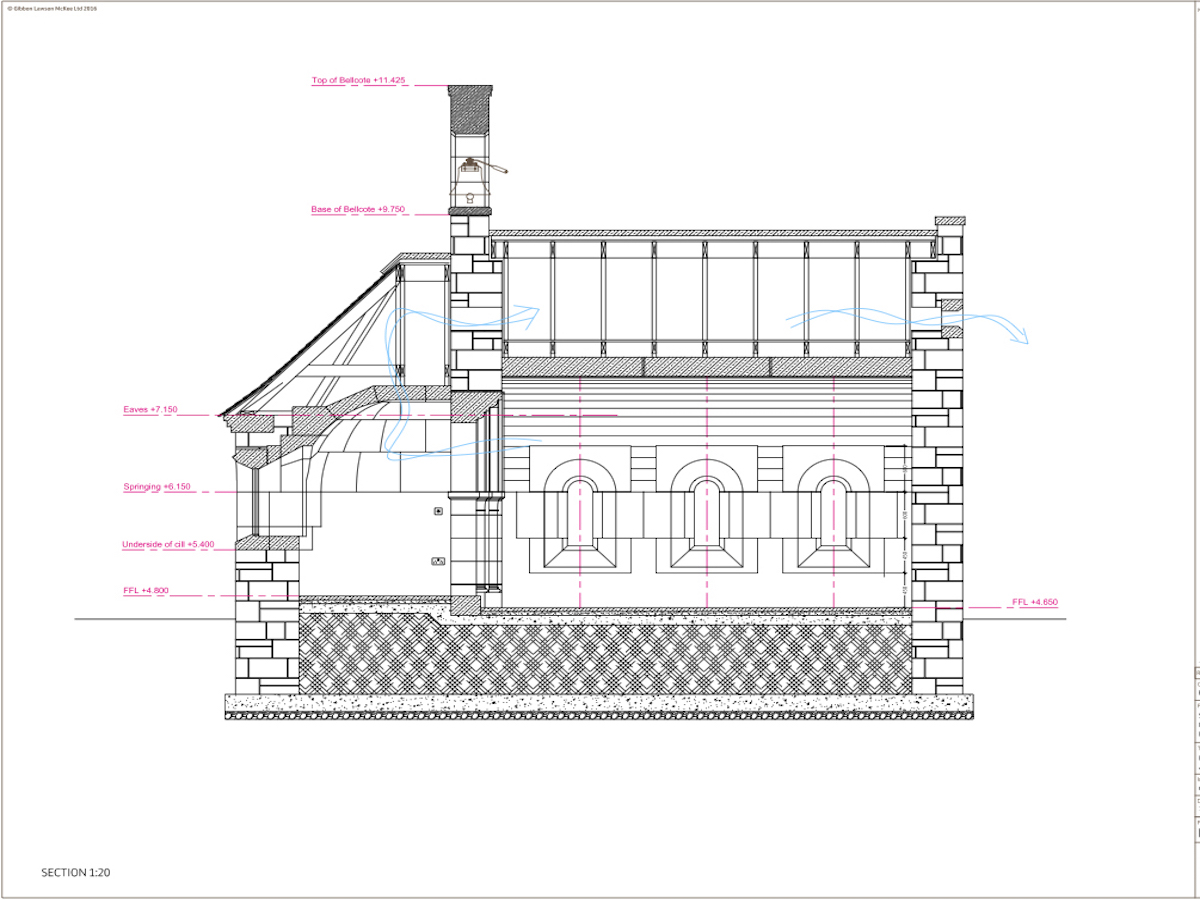