Chandigarh Architecture Museum at Chandigarh celebrates its 21st anniversary. The museum was set up and inaugurated on December 17, 1997, by Inder Kumar Gujral, the then Prime Minister of India. To mark the occasion, a number of activities were held which include, a guided tour for children by the Director of the museum, quiz competition based on the tour, colouring competition, and 'make-a-chair relay race' for children and their families. The aim of these activities was to make the people aware of the entire story of setting up a new capital city of Chandigarh, as well as of immense contribution of many professionals, politicians, bureaucrats, and officers in this regard. The Chandigarh Architecture Museum was established in 1997 to commemorate the historic occasion of 50th anniversary of independent India. The objectives of the museum are to document and display the sequential planning and architectural development of the city from its inception to the present. It was hoped that the setting up of the museum would provide detailed information about Chandigarh, and thus educate students, professionals, out of town visitors, as well as local residents.

The museum showcases a number of drawings, models, furniture, and documents from the original collection of the Architecture Department of Chandigarh Administration, and archives of Government Museum and Art Gallery. Numerous original documents which were not easily available or had not been published earlier are now exhibited here.

The Chandigarh Architecture Museum is now permanently, and befittingly housed in Le Corbusier-designed building which was formerly known as 'Pavilion of Temporary Exhibitions'. It is located in the Museum Complex on the fringe of the Leisure Valley in Sector 10 of Chandigarh. 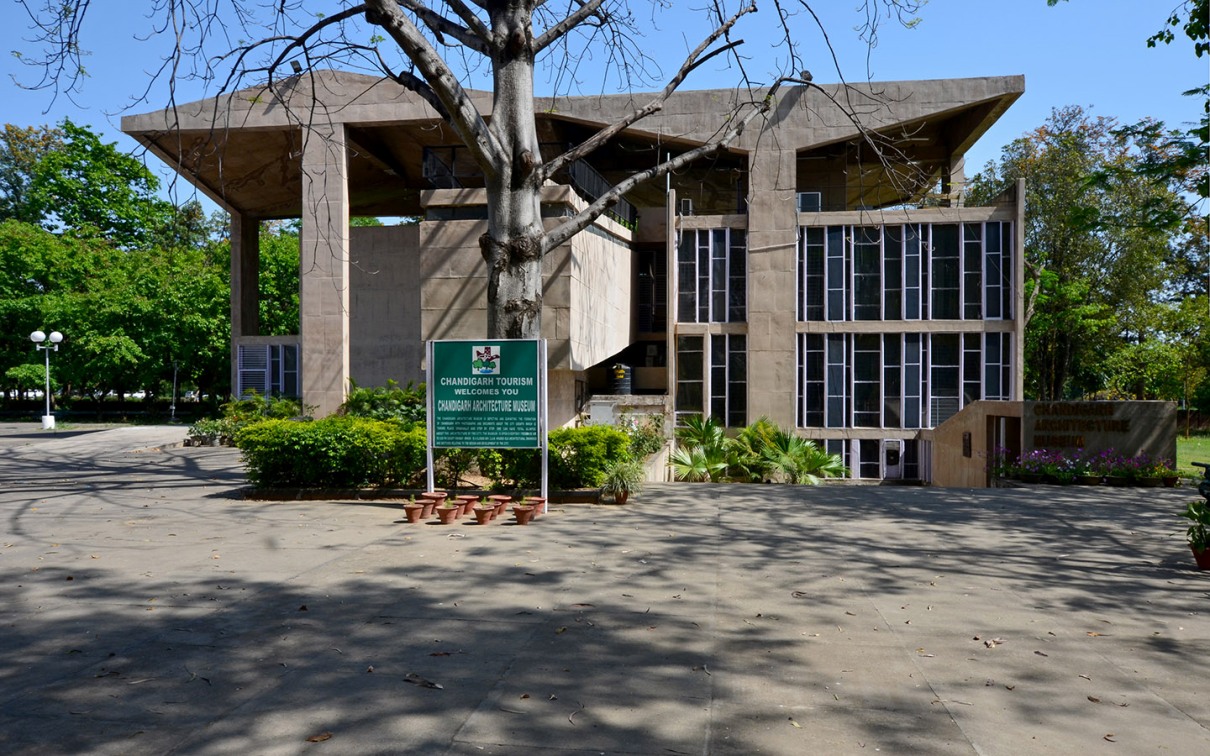 The design of this building is adapted from Le Corbusier's earlier design of an Exhibition Pavilion at Zurich in 1965. The same concept was used for the Pavillon des Temps Nouveaux, at Porte Maillot, Paris in 1937, and later in the design of the Ahrenberg Pavilion in Stockholm in 1962. Unlike the Pavilion at Zurich which is constructed in steel and aluminium, Le Corbusier designed this museum building at Chandigarh in exposed reinforced concrete. 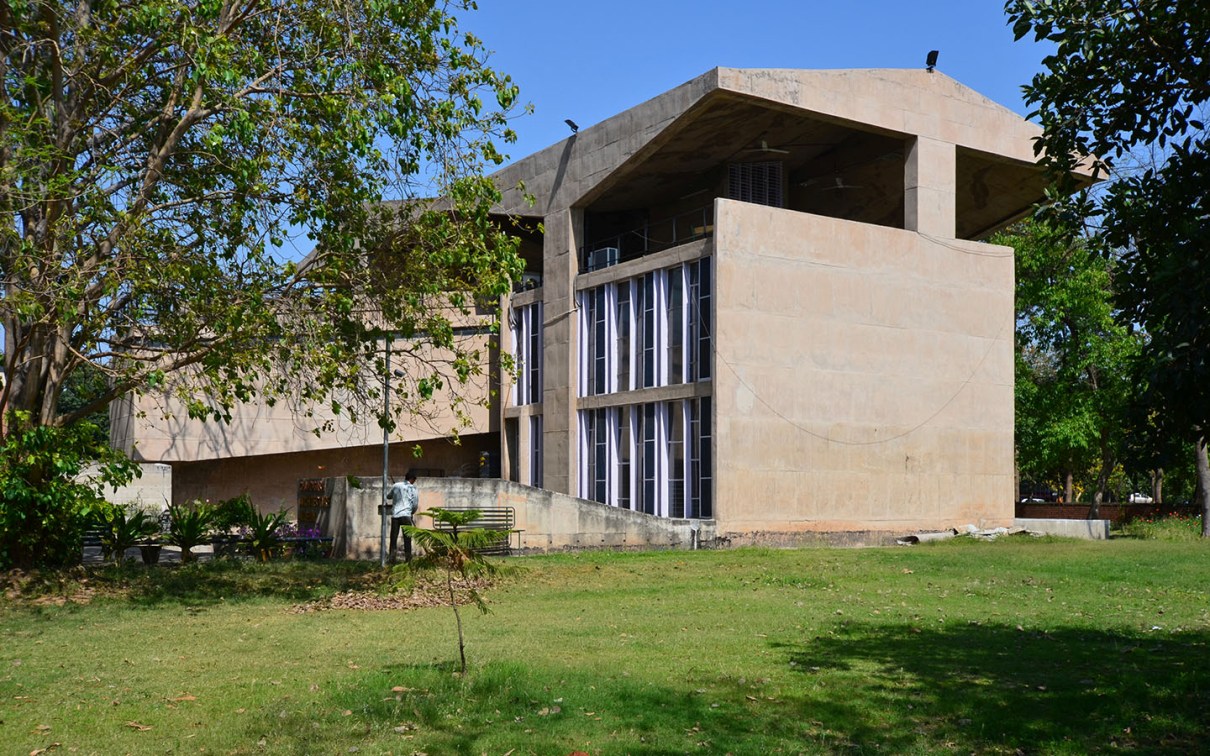 The building is distinctly sculptural and true Corbusian in its outlook. While the main cuboid block of the museum is simple, elegant 14 metres by 14 metres structure derived from two squares. Placed at an offset in plan, it has independent roof in the form of umbrellas that provides the aesthetic element. The parasol-like double roof over the terrace of the main structure is in the form of two pyramids, one upright and other inverted, above each square. The space in between the double roofs is left open to enable free movement of air current to keep the building cool. It has four levels, all of which are accessible by way of a staircase and a ramp which is attached on the outer side of the building. Fenestration is provided with undulatory glazing for natural light, along with aerators for ventilation. Light for the basement streams in via sunken courts. 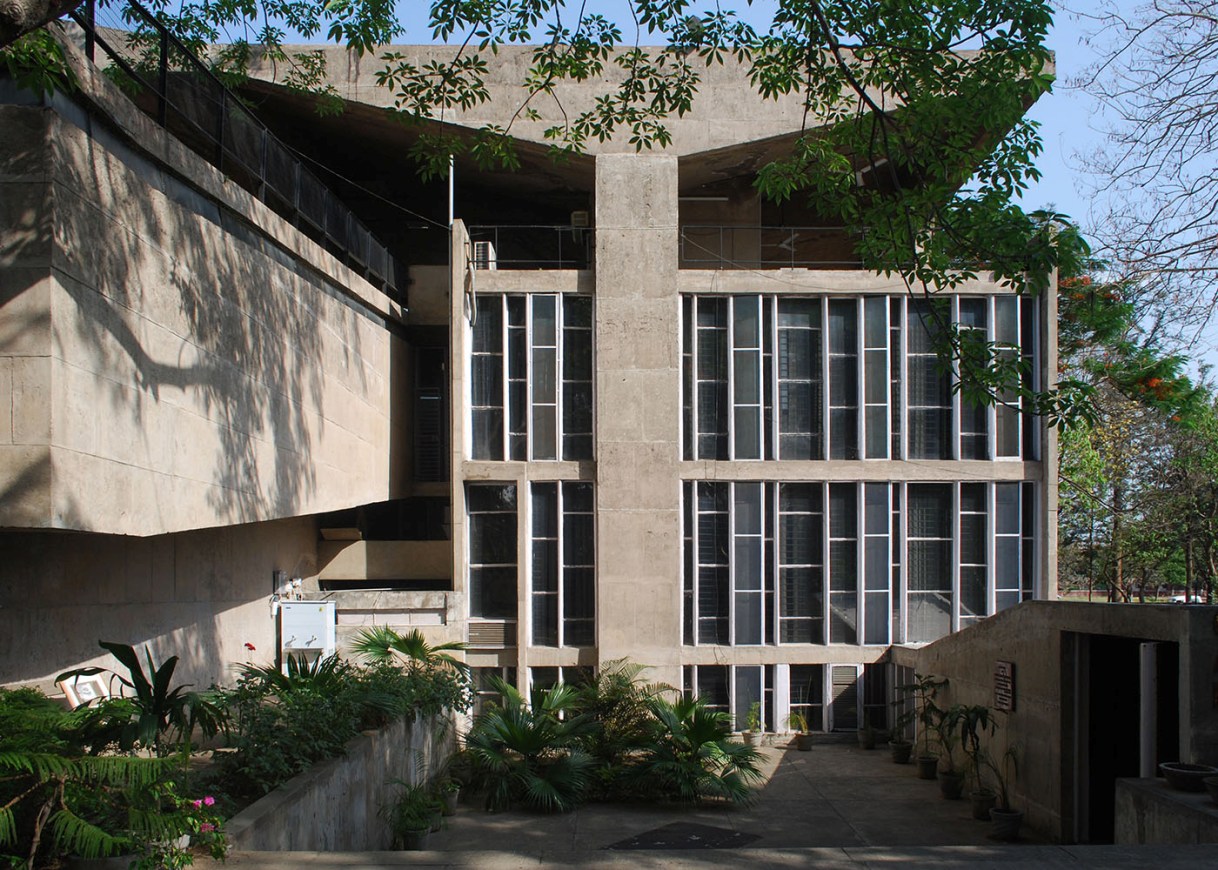 The museum's significant, innovative features include interesting display systems such as translites, models, drawings, documents or their reproductions on acrylic panels. Rare correspondence and other original documents and drawings are also available for public viewing.

The museum is entered through a tube-like stairway at level - 1, which is the basement. Here, the panels unfold the trauma of the Partition of the country in 1947, and the need to build the new capital city of Chandigarh. The story of the selection of site, and the accompanying controversies are displayed through rare documents, maps, and drawings. The features of the site finally selected such as its topography, existing villages, vegetation, archaeological history, and a panoramic view of the Shivalik Hills provide a fascinating picture of the land which was to be transformed into the new city. 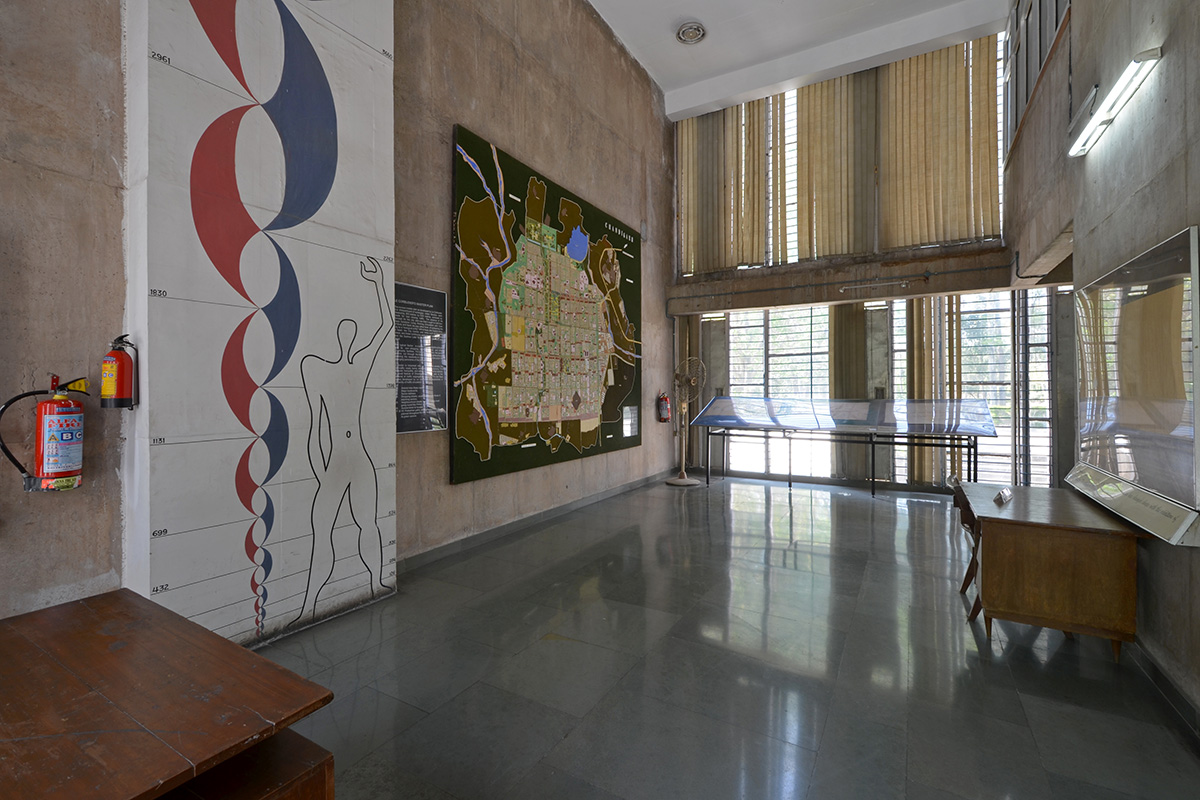 The exhibits focus on the selection of the first team of architects which comprised American planner, Albert Mayer, and a Polish architect, Matthew Nowicki. It includes evocative sketches, studies and drawings visualizing various housing projects, shopping schemes, and other features of a neighbourhood unit. These panels also demonstrate the enormous amount of pioneering work done by Mayer and Nowicki for developing an architectural style suited to the Indian context, and to evolve the first master plan and schematic idiom for Chandigarh. An internal staircase leads to the upper floors symbolizing the gradual evolution of Chandigarh's growth. The level - 2 is earmarked for exhibits showing Le Corbusier and the selection of his team and their work. Models and blueprints of the important buildings designed by Le Corbusier for Chandigarh are on display. Also included a special section on Le Corbusier's 'unbuilt masterpieces' such as the Governor's Palace, the Museum of Knowledge, and Sports Stadium in Sector 26. 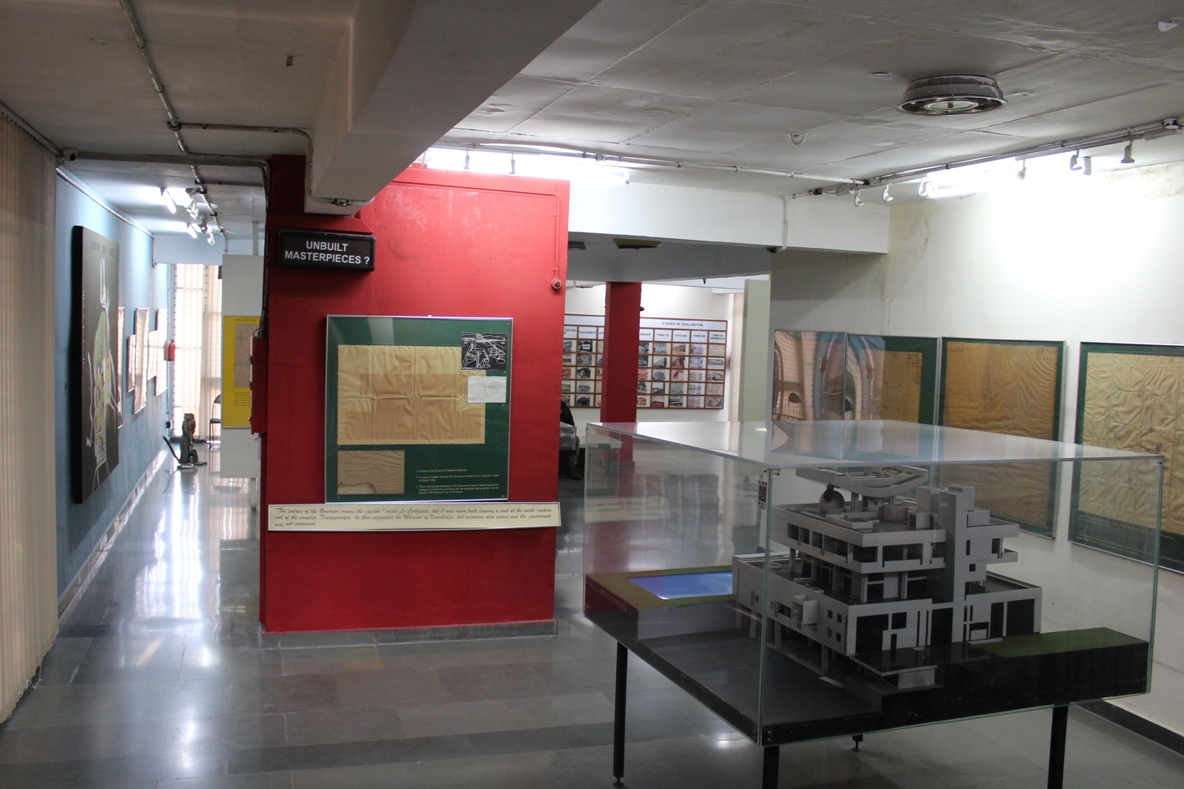 The level - 3 is reserved for the theme 'Chandigarh: Today and Tomorrow'. This section broadly displays the city's growth after the first phase of construction and the departure of Le Corbusier and his foreign associates - Pierre Jeanneret, Maxwell Fry and Jane Drew.

Level - 4, which is the uppermost floor, serves as terrace and there is a snack bar designed to offer light refreshments against the backdrop of Shivalik Hills. The terrace is also intended to be used to display sculptures, murals, and other art works.

The museum like Chandigarh itself, has encapsulated the spirit of the city, and displays in a microcosm the macro-world of a great urban experiment. 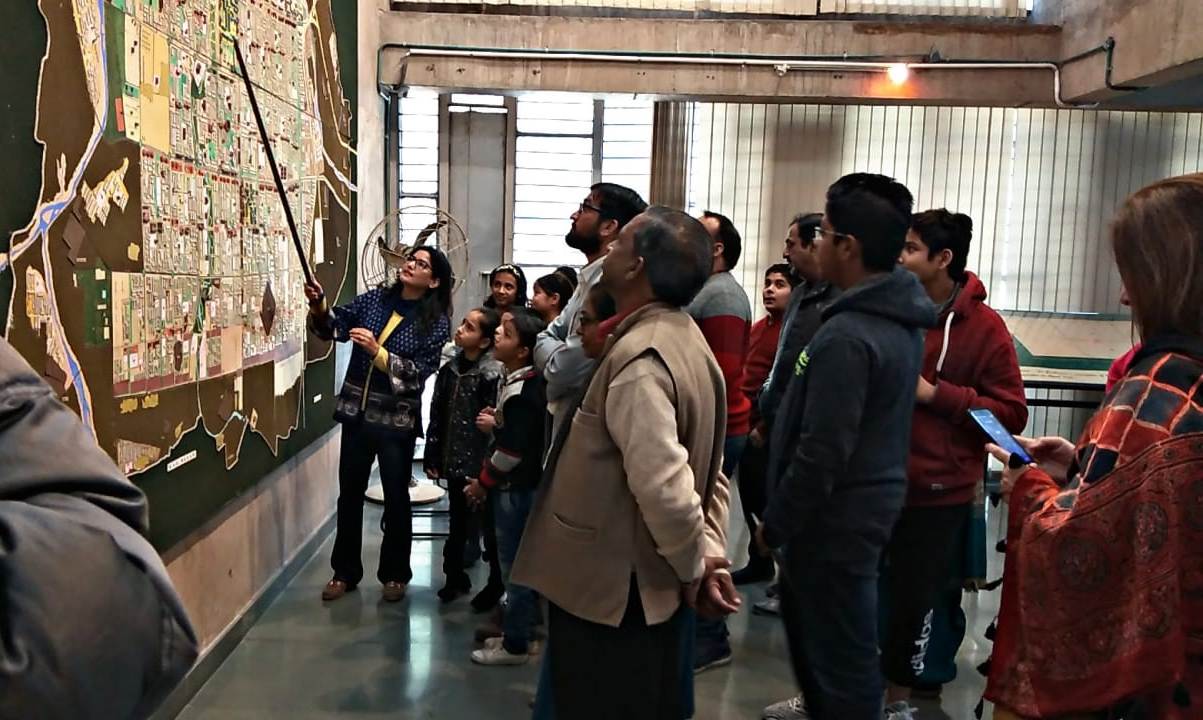