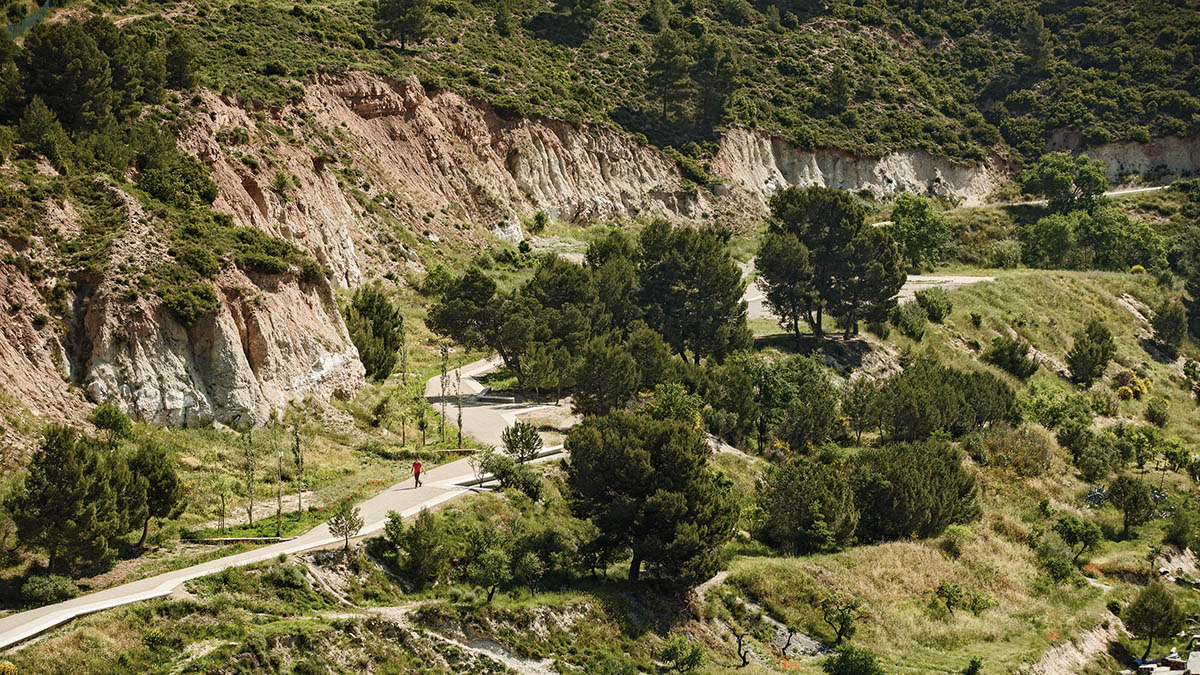 Barcelona-based landscape architecture firm Batlle i Roig Arquitectura has won the Landscape of the Year Award for 2018 at this year's World Architecture Festival, which was held at RAI Amsterdam between 28-30, 2018.

The architects' project Pedestrian Path along the Gypsum Mines in Barcelona, Spain was awarded with the WAF's prestigious annual award.

The project aims at creating a set of pedestrian and bicycle itineraries in the form of a green belt on the perimeter of the city, and impressed the judges with a "poetic response using minimal means", engendering a "process of observation, translation and transformation". The jury also commended it for its innovative use of materials. 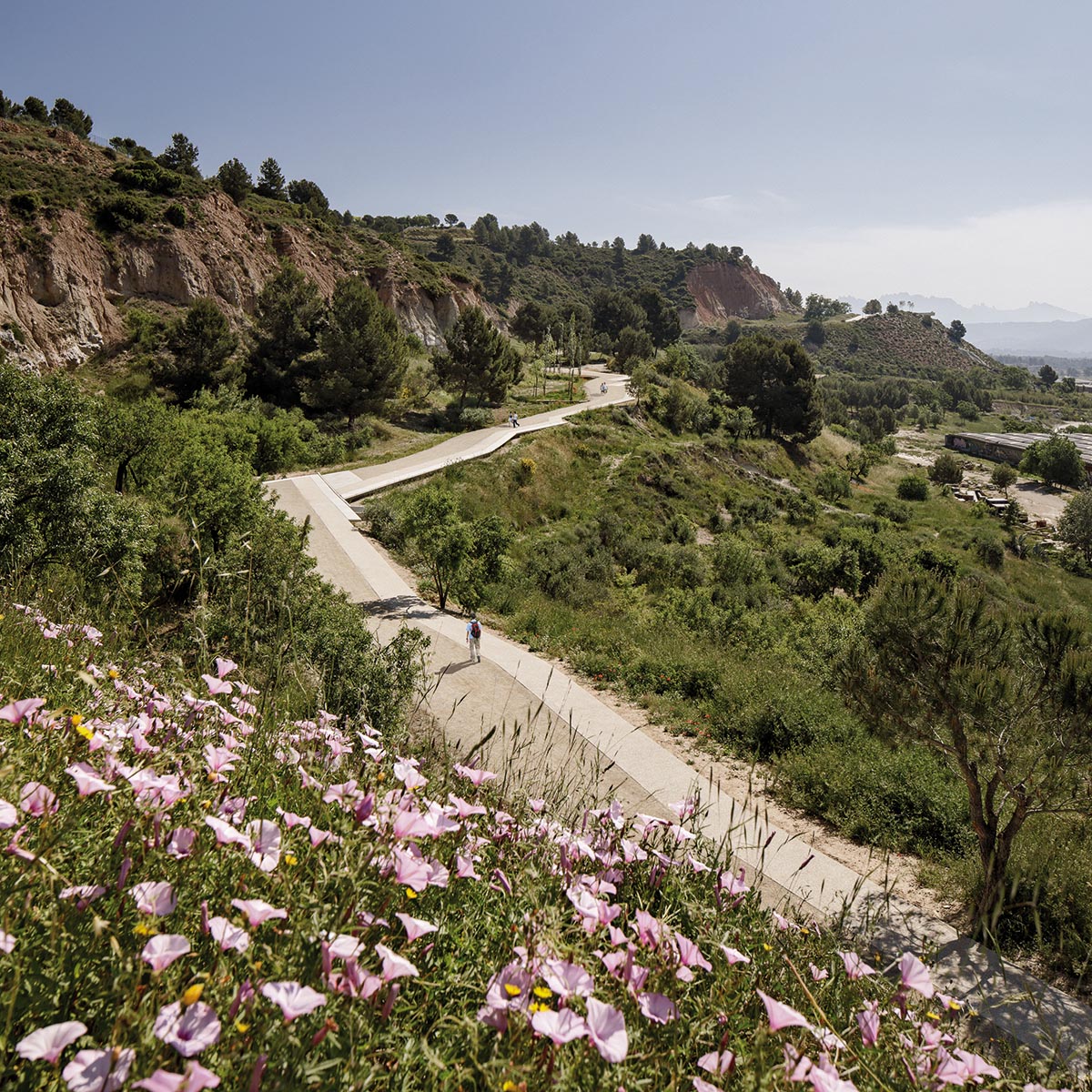 The project is set within the broader scheme of the Igualada Green Ring, the aim of which is to generate a series of itineraries for pedestrians and bicycles in the form of a green belt around the city’s perimeter.

This new sustainable mobility infrastructure sets out to design a system of parks and peri-urban open spaces that function as a network suitable for environmentally friendly leisure activities, adapting and recovering, to a large extent, spaces that are currently run-down or underused. 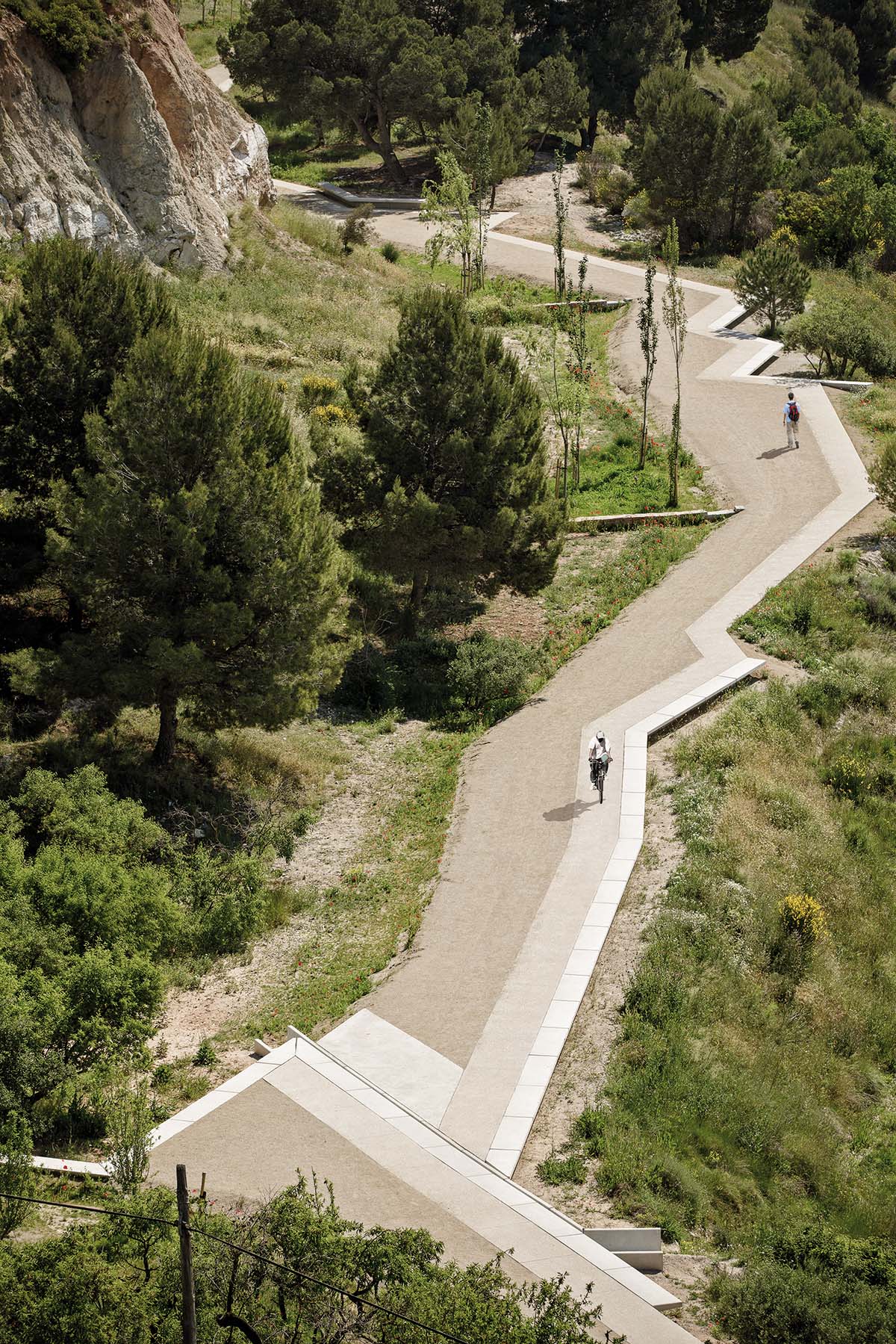 In this context, Camí de les Guixeres, the track leading to the mines, represents the recovery of a stretch of 1.65 kilometres, out of which the first 800 metres have now been completed.

The natural space through which this track runs lies on the northern limit of the city of Igualada and is in a very run-down condition. Intense mining was carried out in the site (El Claret and El Pelfort gypsum mines) and, when the mines closed down, the area was used as a municipal waste transfer station. In the late seventies, when this facility was also closed down, the space was totally abandoned with no subsequent corrective action or recovery. 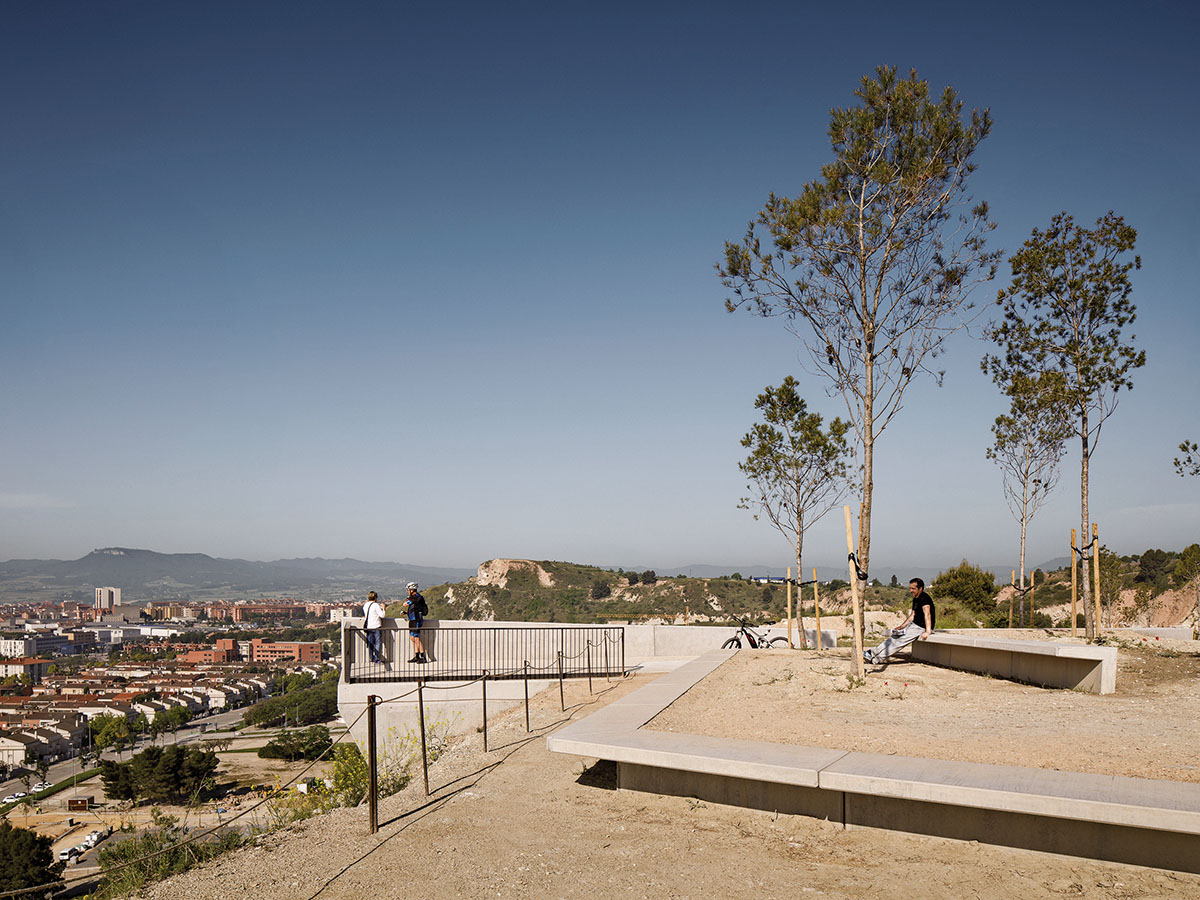 The project has two principal objectives: one of them aims for a better connectivity, to ensure the continuity of the city-scale project (Green Ring), and the other ones seeks to recover the landscape and biodiversity, establishing the necessary elements to generate a new dynamic in the site that will gradually improve its environmental conditions by harnessing the water.

In this sense, the proposal creates a typical section with three clearly differentiated strips that adapt to the different situations of the layout, addressing the problems of the site as well as developing its potential. 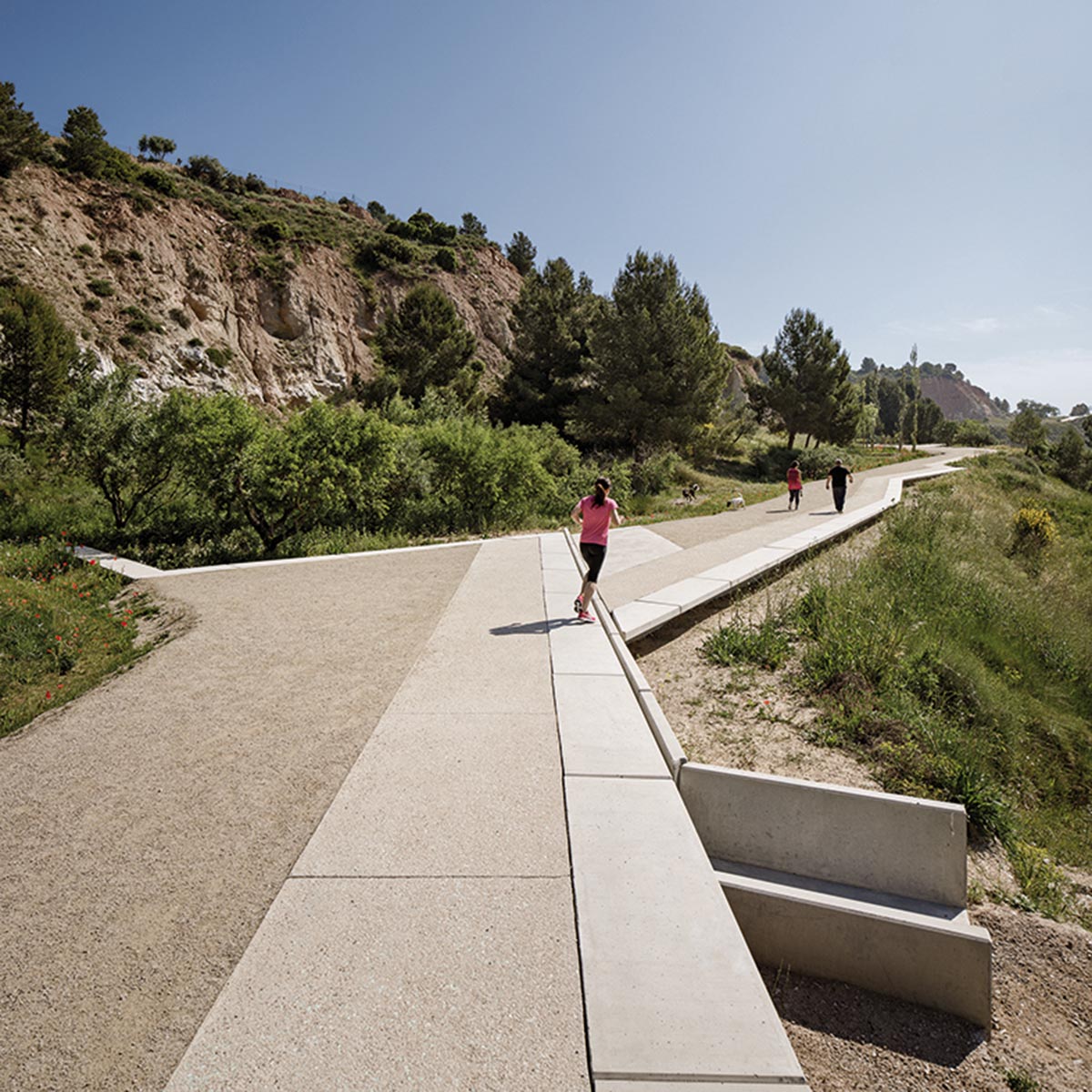 The central strip, with the main granitic-sand track, guarantees the continuity of the Green Ring. It is approximately three metres wide and its mostly laid out following the original path. This track is complemented by a second strip, in the form of a linear lookout overlooking the city of Igualada.

This vantage point is materialised by a 1.2-metre-wide paved strip along the outer edge of the track, directly related to the views. It is built with hard paving, giving the track a strip with improved accessibility. In addition, the concrete used is made with luminescent aggregate that improves visibility during the evening by returning, in the form of luminescence, the solar energy captured during the day. The layout of this linear scenic viewpoint recognises the principal existing landmarks, vegetation and trees by widening and creating rest areas, complemented with linear benches. Finally, this strip recognises the exceptionally fine views of Montserrat from Les Guixeres Hill, generating a final vantage point in the form of a structure cantilevered over the mountainside. 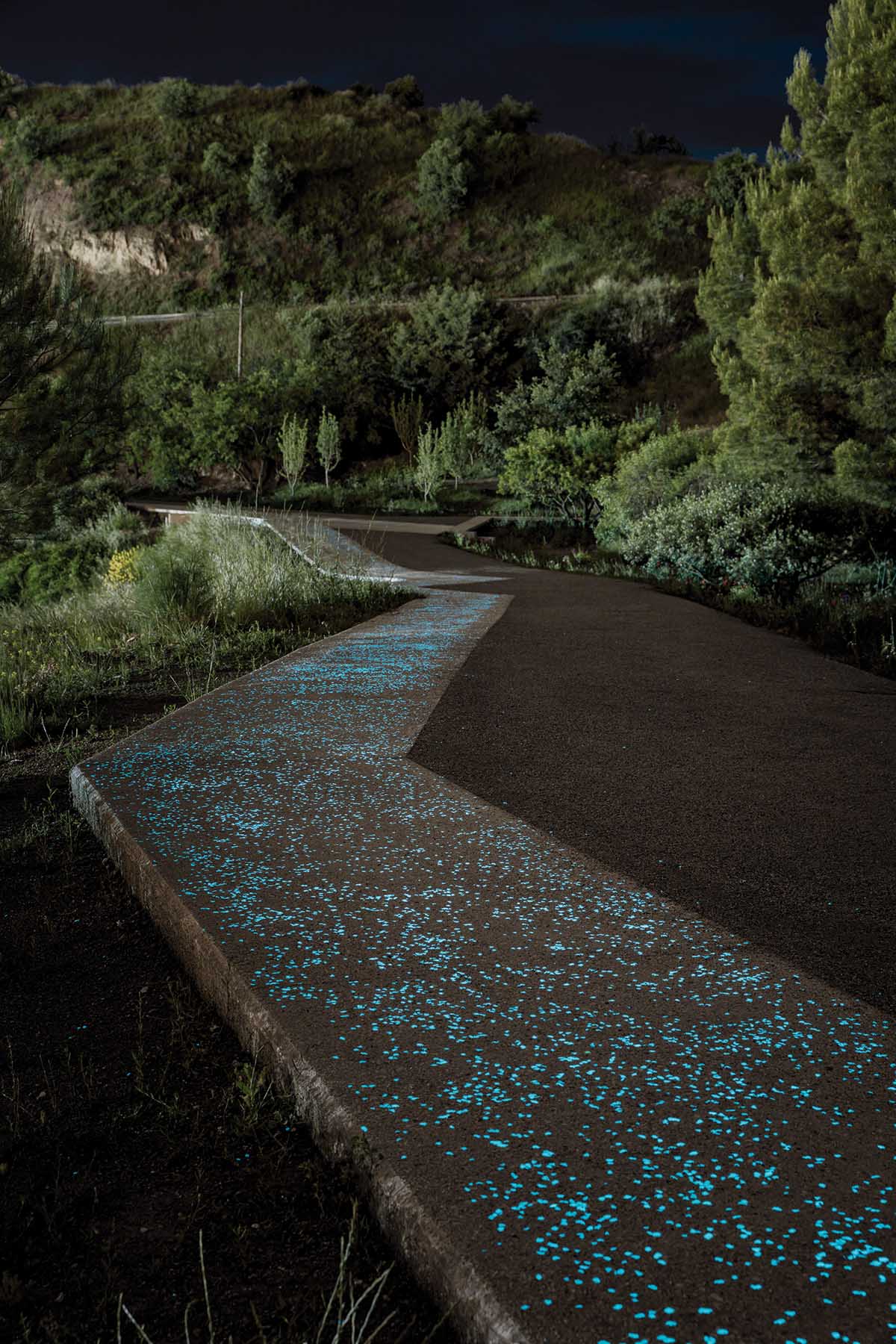 Finally, the inner edge of the track, acting as a plant ditch, helps tochannel runoff from the mountainside and generates a safety strip to stop minor landslips.

These same fallen rocks are used to build a sequence of retaining walls with the aim of filtering and rechannelling much of this water to new points where vegetation has been planted to colonise the place. 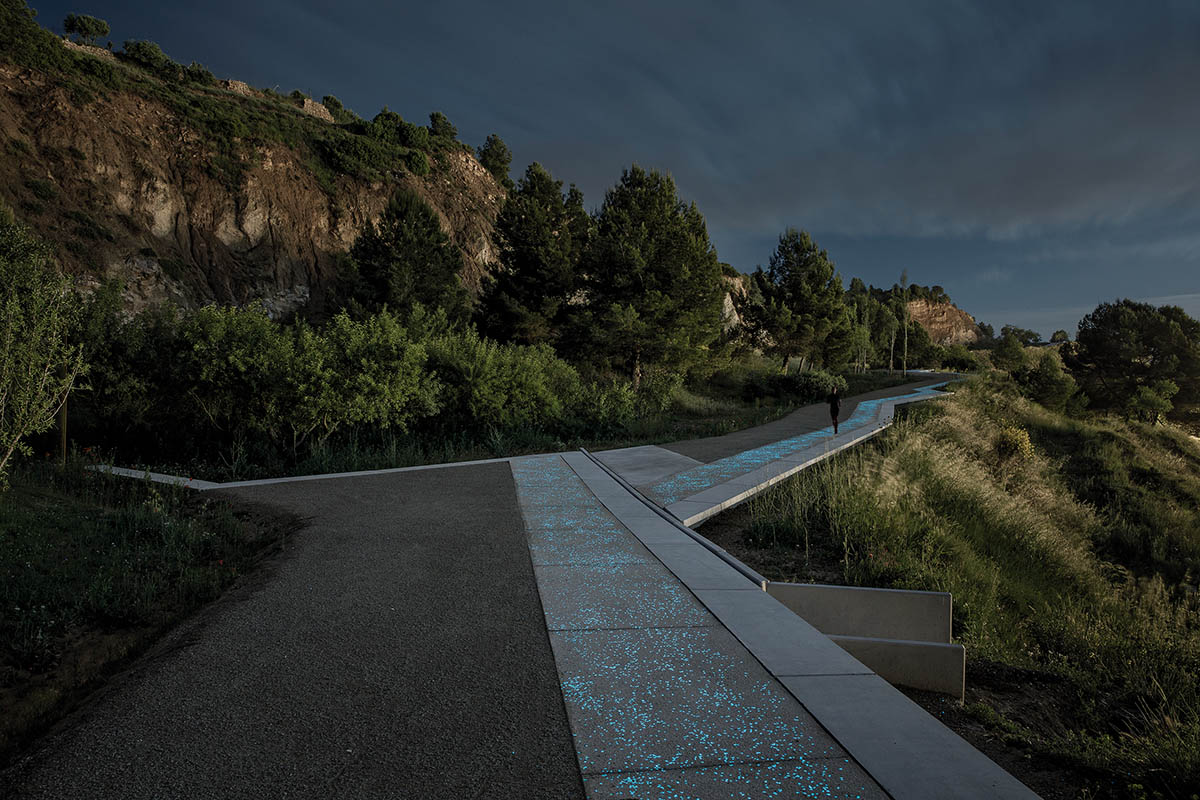 The same elements used to build the lineal benches in the rest areas are also used lower down to create spillways, allowing the water to continue its course in the event of heavy rain. 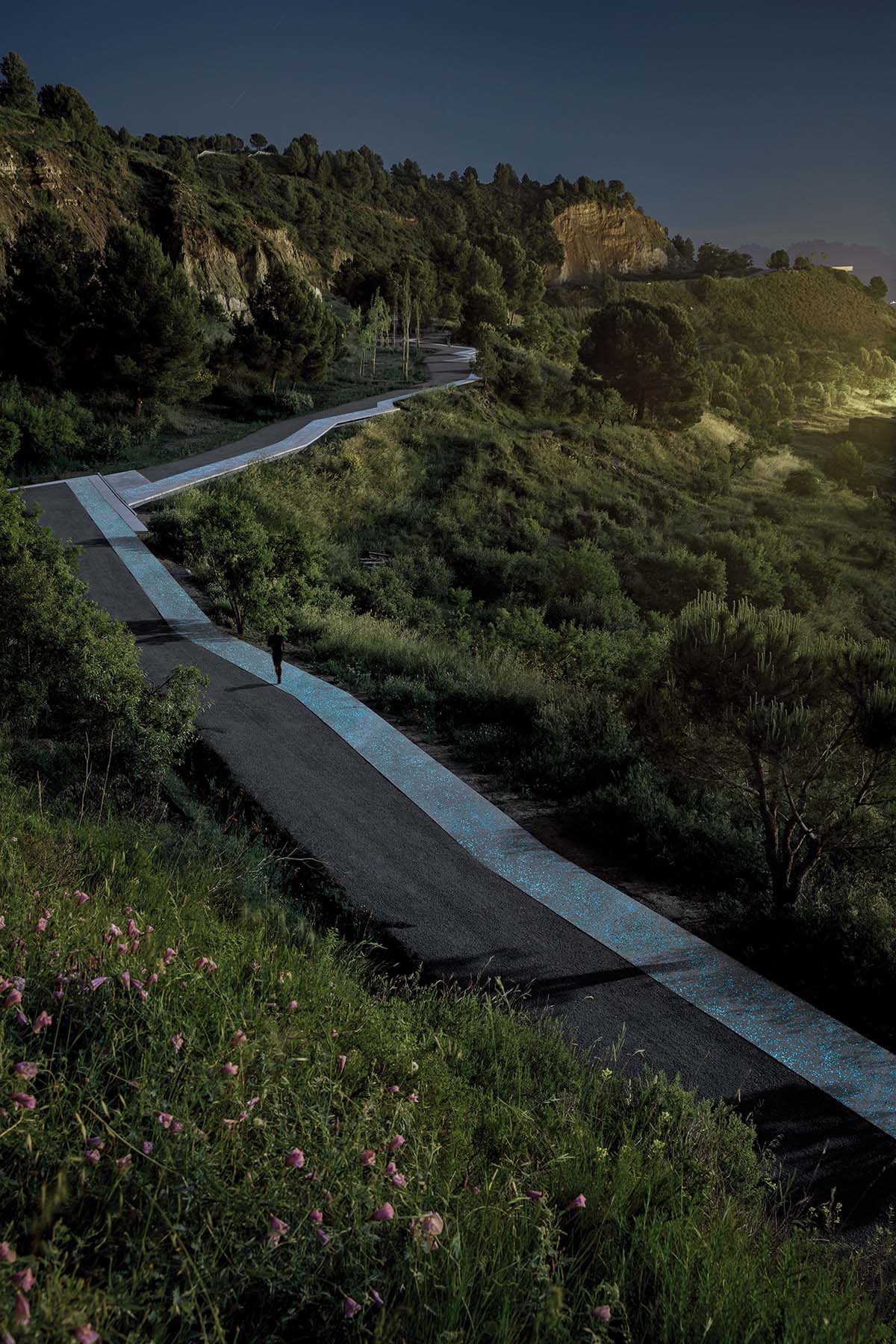 You can read more detailed coverage about the event on WAC.