THEVERYMANY creates a tangled installation on a pier of Florida 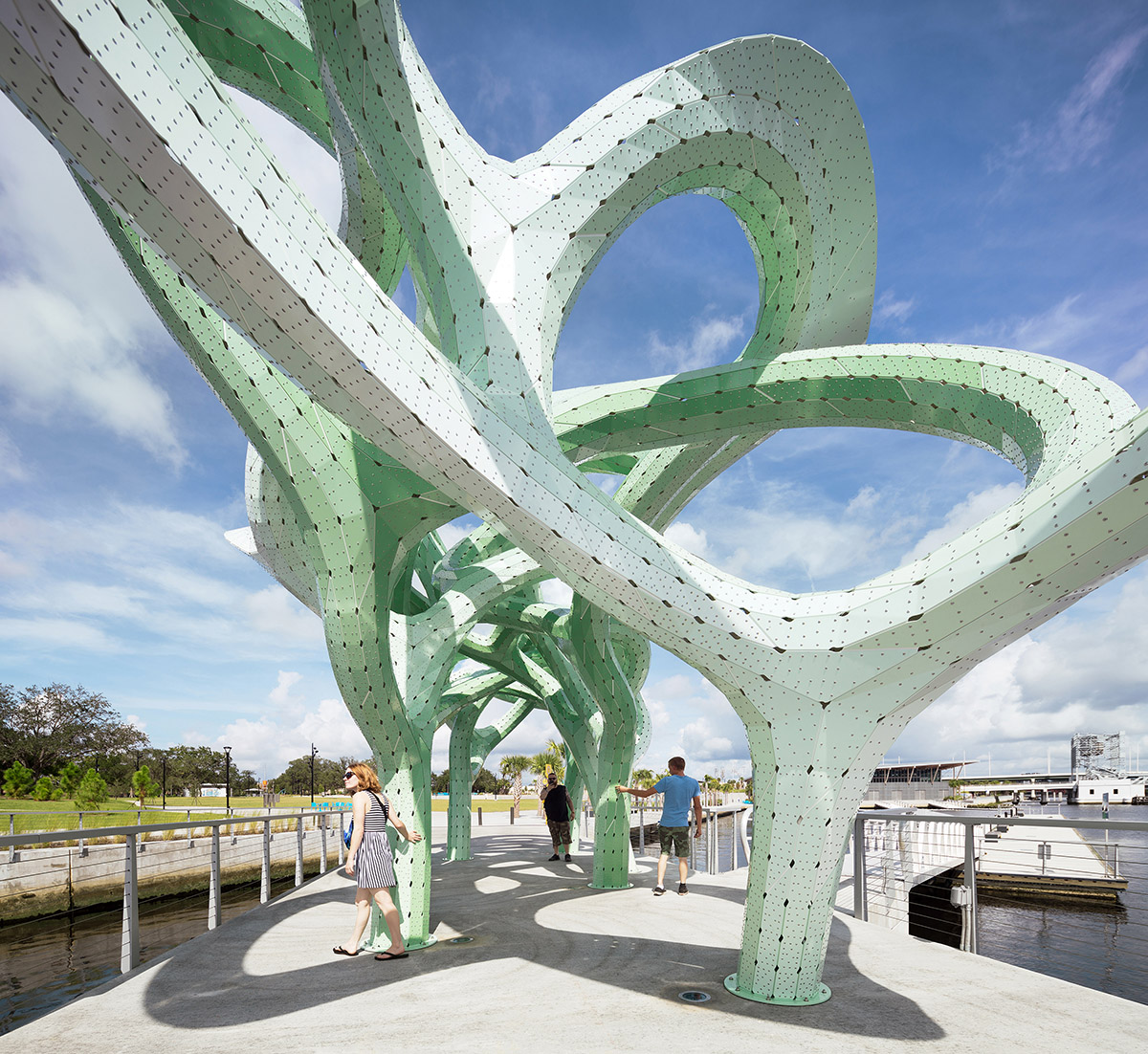 Marc Fornes' art and architecture studio THEVERYMANY has created a tangled installation on a pier of Tampa, Florida, inviting visitors to discover a new structural network, to pause, reflection, and wavering affections, like a pace of walking seen in other places.

Named Form of Wander, the structure is situated to host new outdoor activities and new memories at Julian B. Lane Riverfront Park in Tampa, Florida.

As an inverted mangrove, the green-hued aluminum canopy announces itself among palms as a signal on the Hillsborough River. The tree-like structure appears to float between water and land. 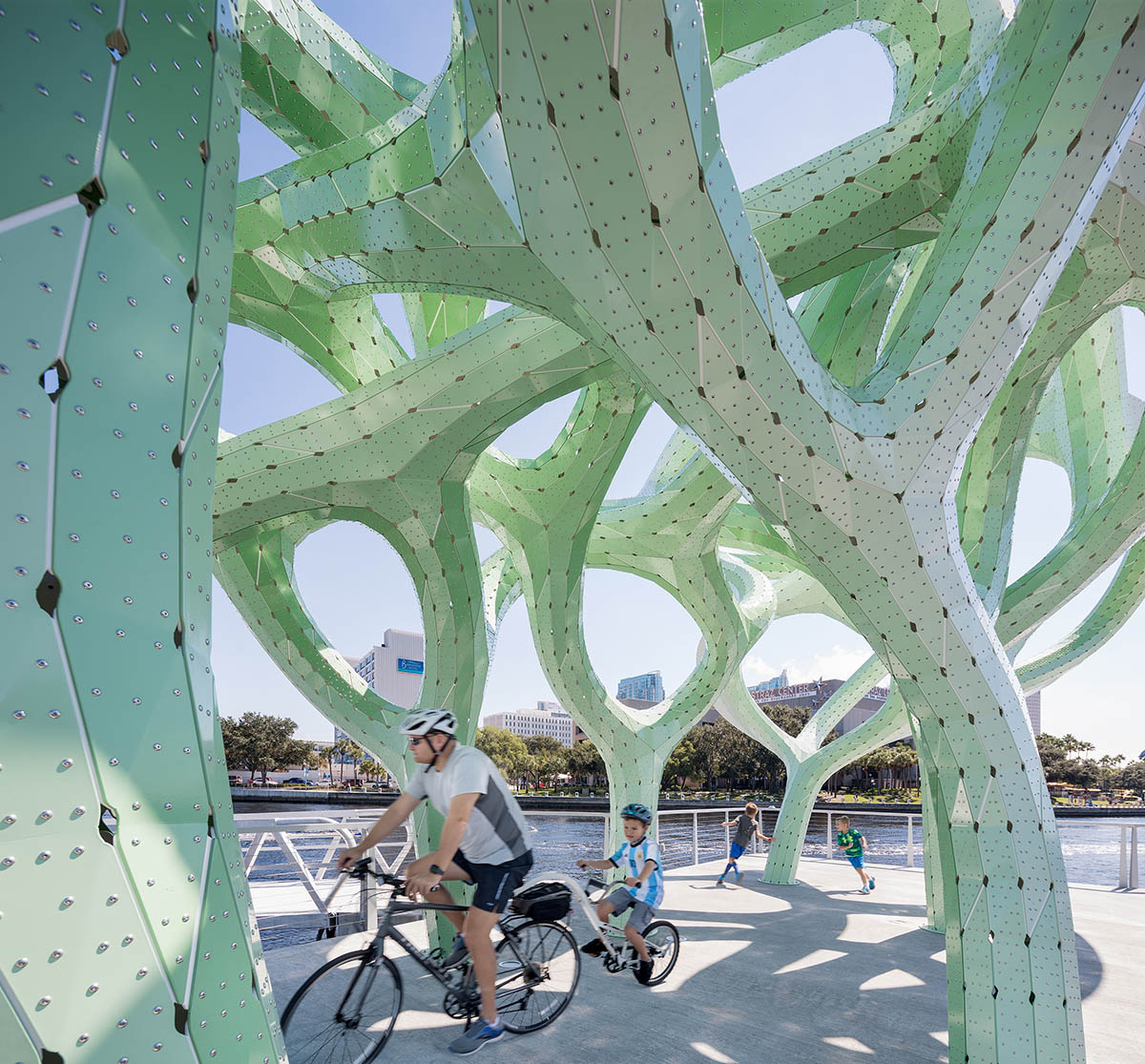 Commissioned by Hillsborough County Public Art, Form of Wander is the second permanent project by the studio in Florida, after Under Magnitude in Orlando.

Inspired by the 17th century french gardening, movements and landscape designs, the architect translated these echoes and moevements happening in all these places, such as pause, reflection, and wavering affections, into a new tree-like structure. 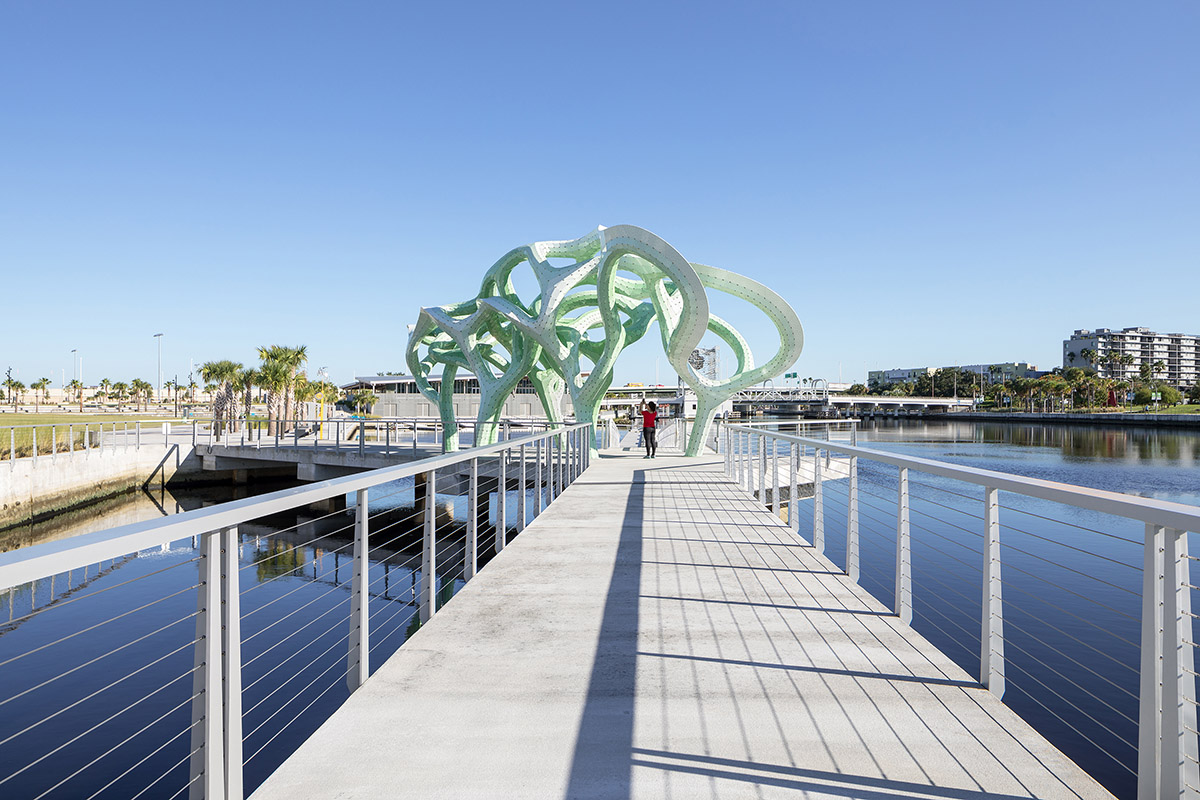 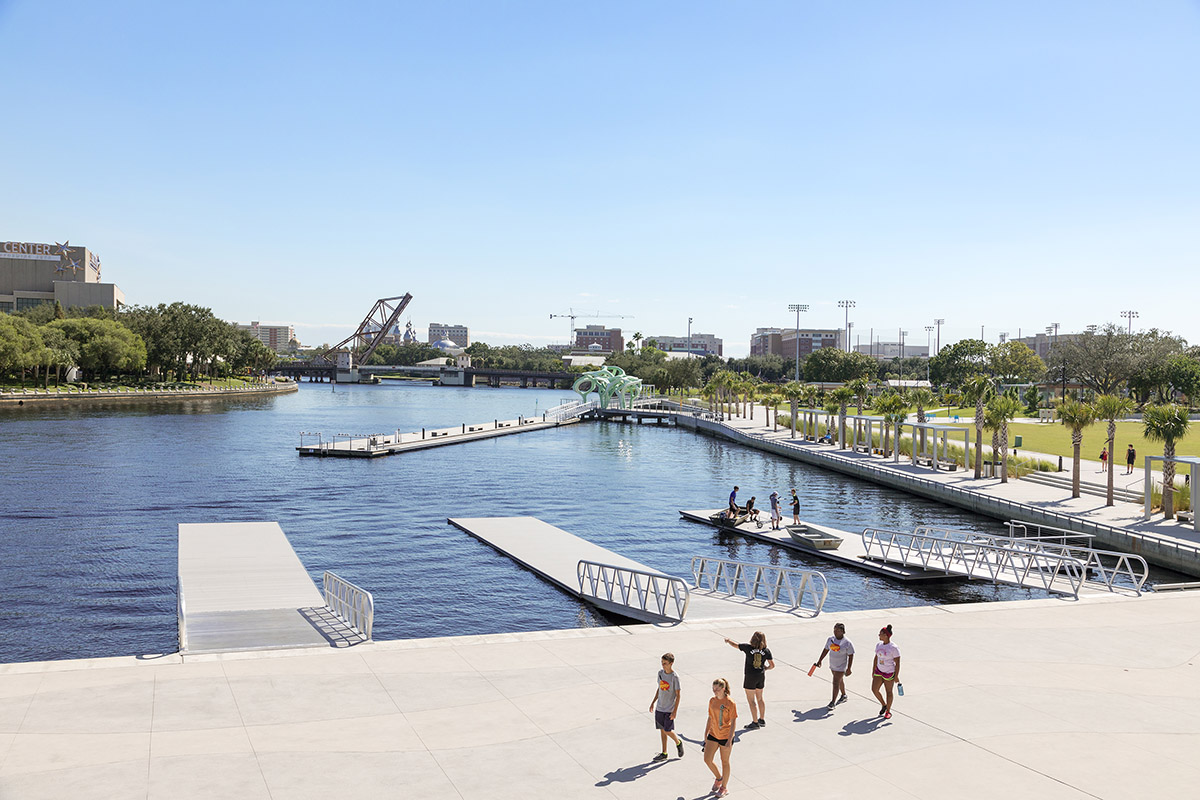 "These qualities and the experience of the leisurely walk can be found across other architectural and ecological references," said Marc Fornes.

"Within Form of Wander, the garden gives over to the woods. Or, perhaps, the labyrinth - another curious feature of Louis-XIV era gardens. Here, there isn't one path to choose, but many."

"The density of branches overhead gives a distinct sense of being inside a strange forest. Here, the structure disrupts the regularity of the pier's pathway, inviting wanderers to look up and out," added the architect.

Faceted members split, arch, and recombine to produce an open network that you can move through. Gradients follow directional stripes pale green to brilliant white, which alternately highlight cantilevered edges and shadow the interior portion. 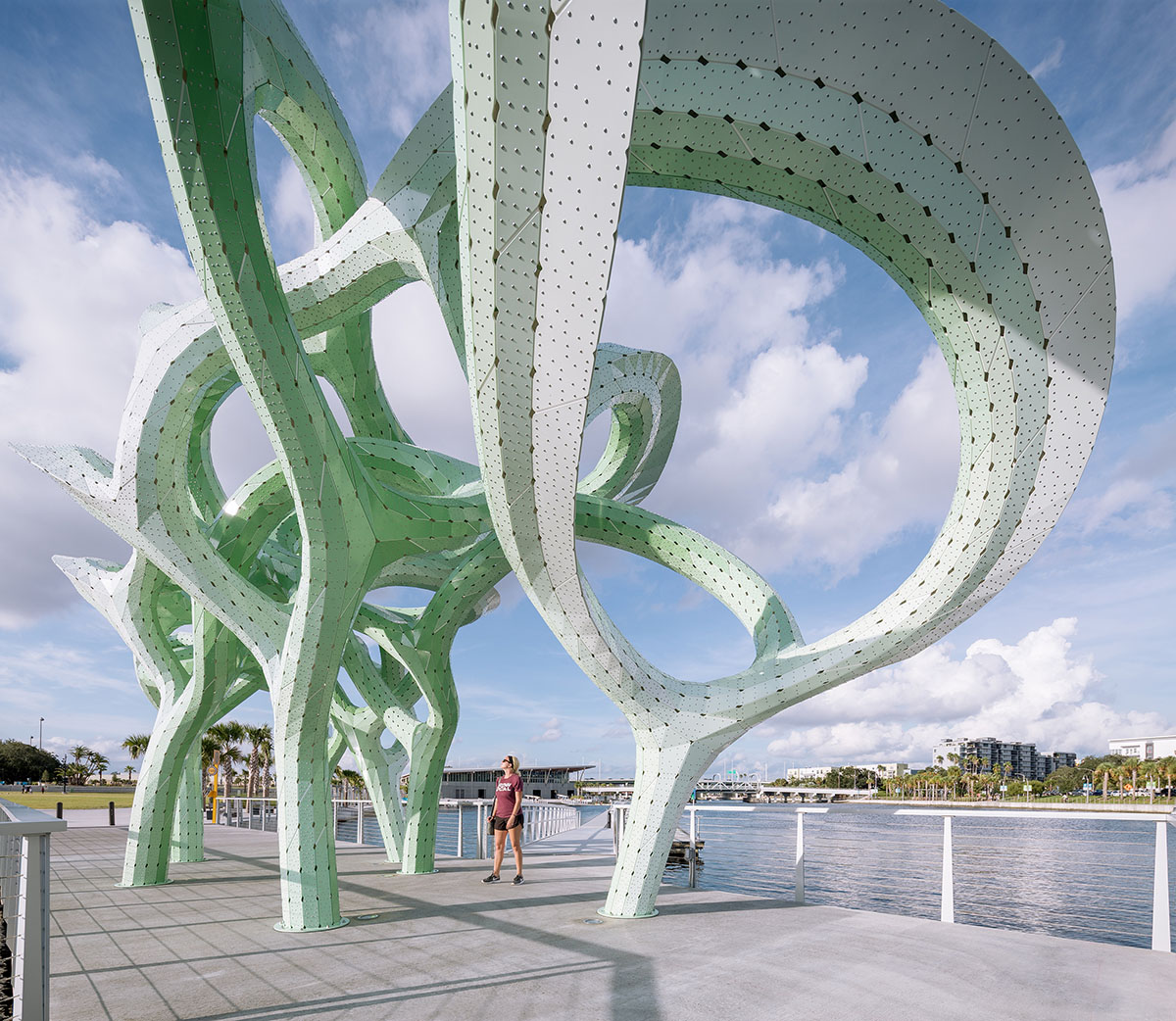 Six greens from "Chatty Cricket" to "Green Whisper" make up a linear gradient applied locally and according to the direction of the topology.

Chosen specifically to react to the changing sun, the palette livens to a bright green in response to Tampa’s usually sunny weather, without tipping into the yellow spectrum, and appears more pastel on the rarer grey days. The muted green borrows from a tradition of Art Nouveau-era riveted structures, and stands up against the verdant palms of the shoreline surrounds. 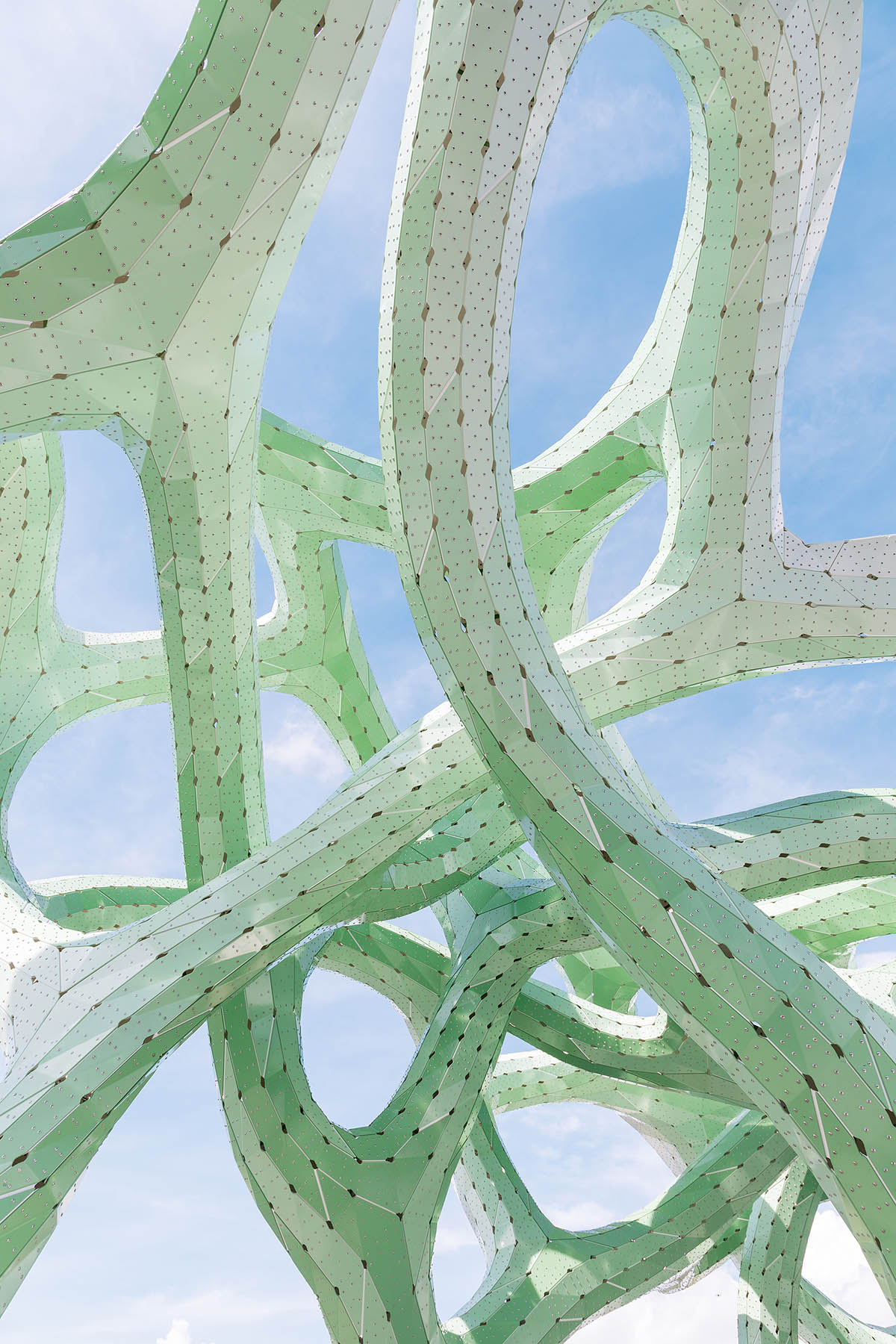 "Distinct from our other projects that use a structural network, like another project in Florida, Under Magnitude, the branches and intersections of this network are not distributed and held in tension, but highly curated and directional," added the firm.

Legs splay out strategically to make spaces between them and frame views. The form is pulled to project out toward the water, in swooping cantilevered. The columns aid in that directionality, giving a sense that the form has been picked up by the wind. 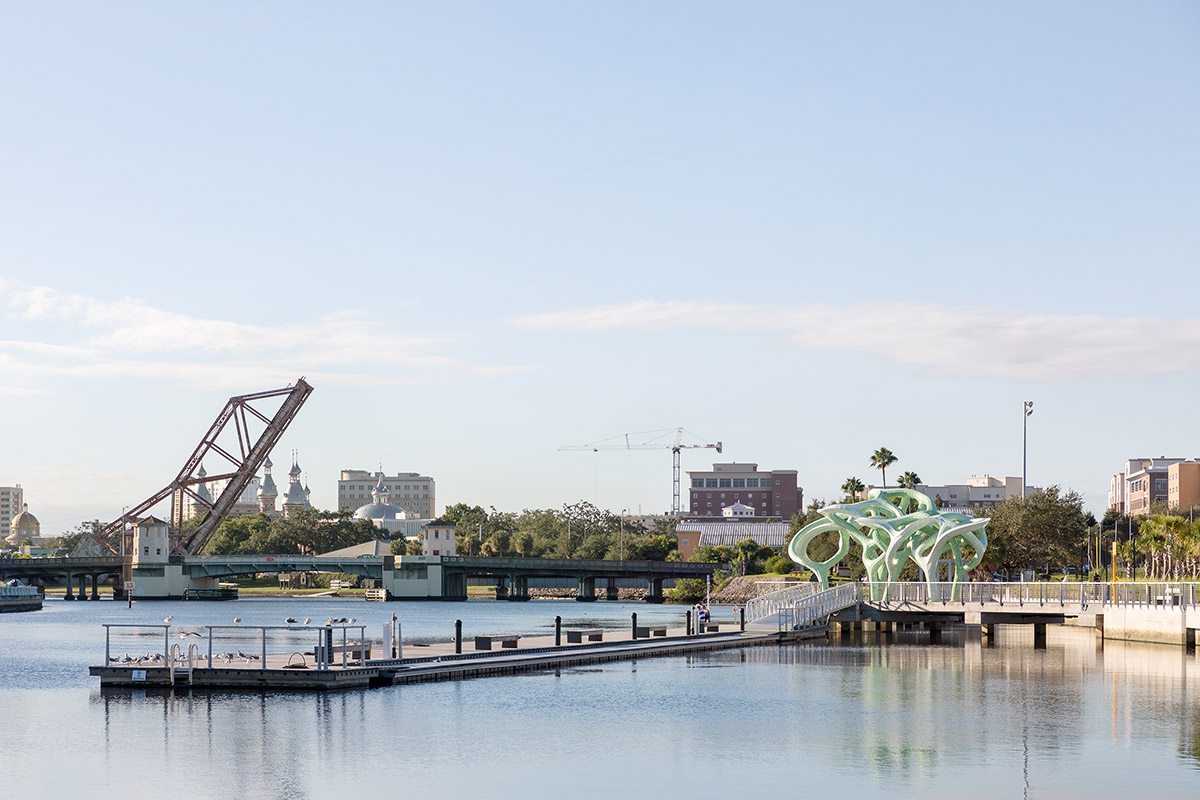 The network underwent rigorous structural analysis by THEVERYMANY's consulting engineers at LaufsED, who tested the base mesh at 3mm, 4mm and 5mm thick aluminum.

"From their simulations, which shows stresses from dead load of the structure and the wind loads that could be anticipated in Tampa, we generated a mesh that responded to areas of higher stress." 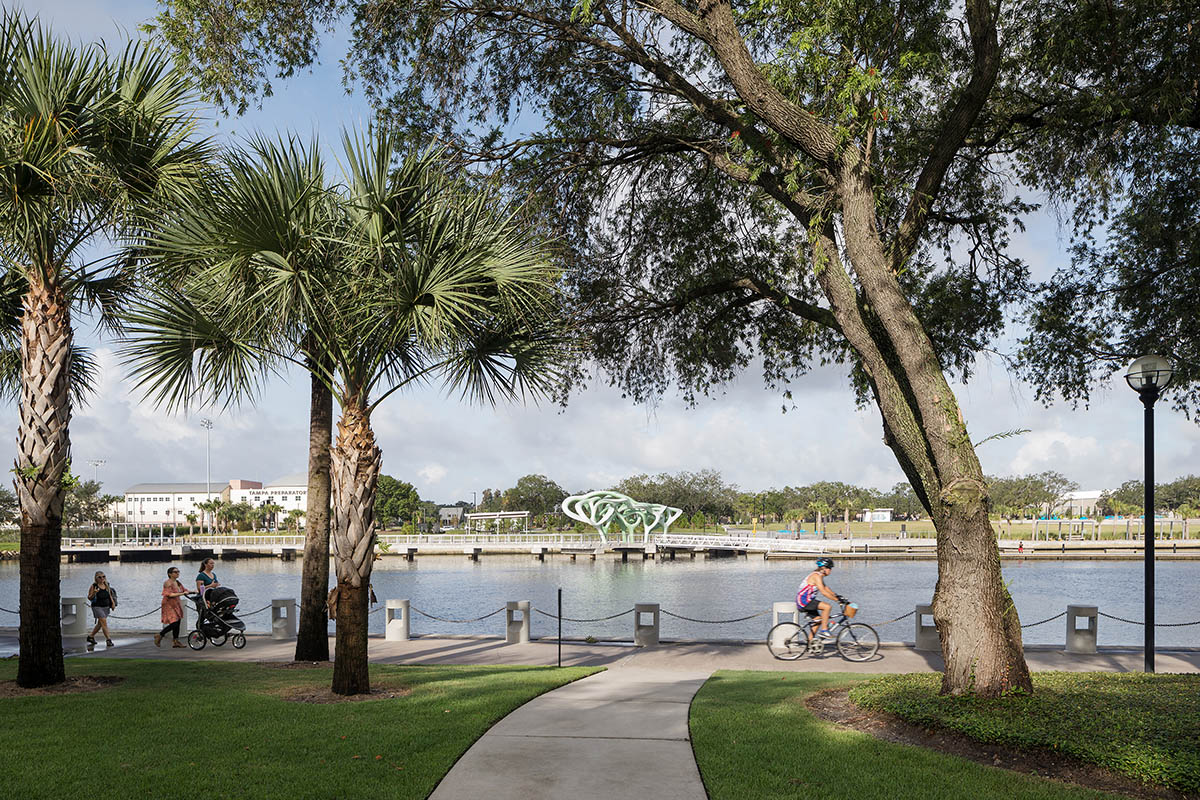 That base mesh was segmented into two types of parts - rings and stripes - of mixed material thicknesses. Areas of lower stress would be composed of parts in 3mm aluminum, going up to 5mm where the studio needed to be the most conservative. 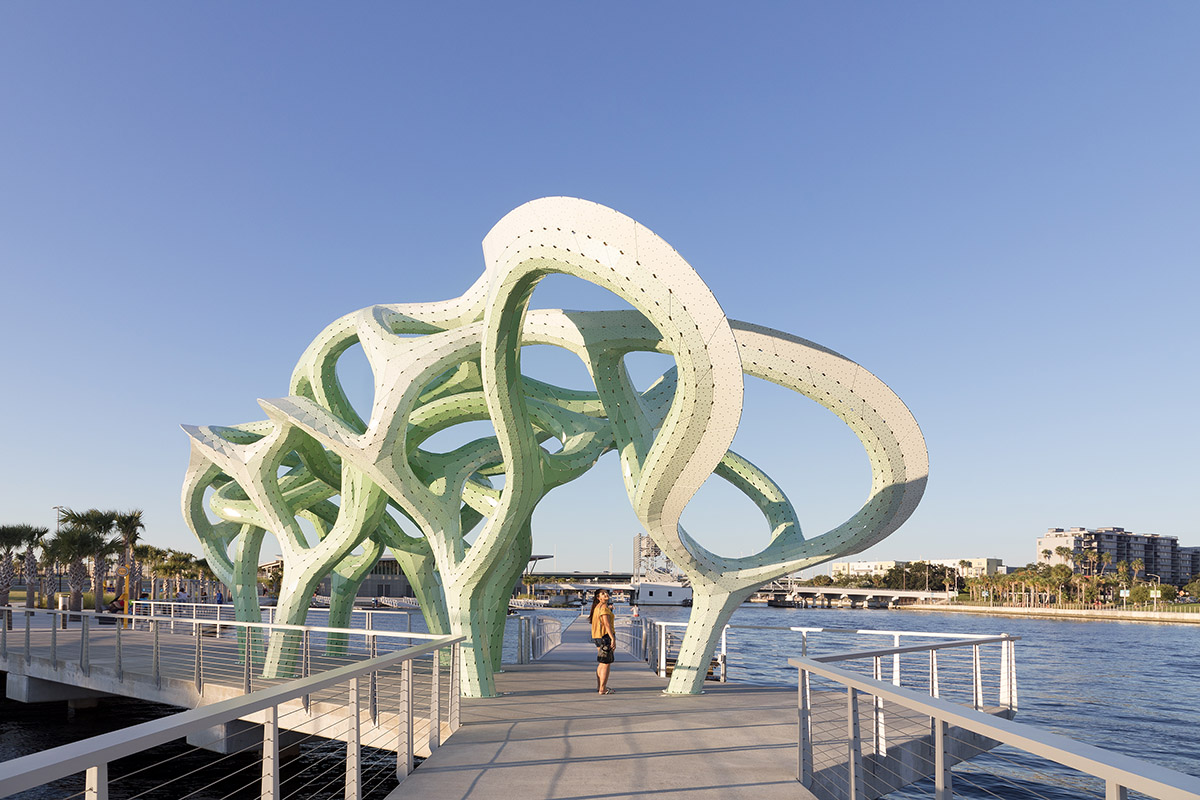 "Shortly after the last pieces were riveted in place, Tampa withstood extreme wind loads from Category 4 Hurricane Michael. But the structure was devised to stand up to such weather: its 3,123 parts make up a double-layer structure, with rings forming the interior layer of the columns and stripes cross-laminating as an exterior skin to compose the branching elements," added the studio. 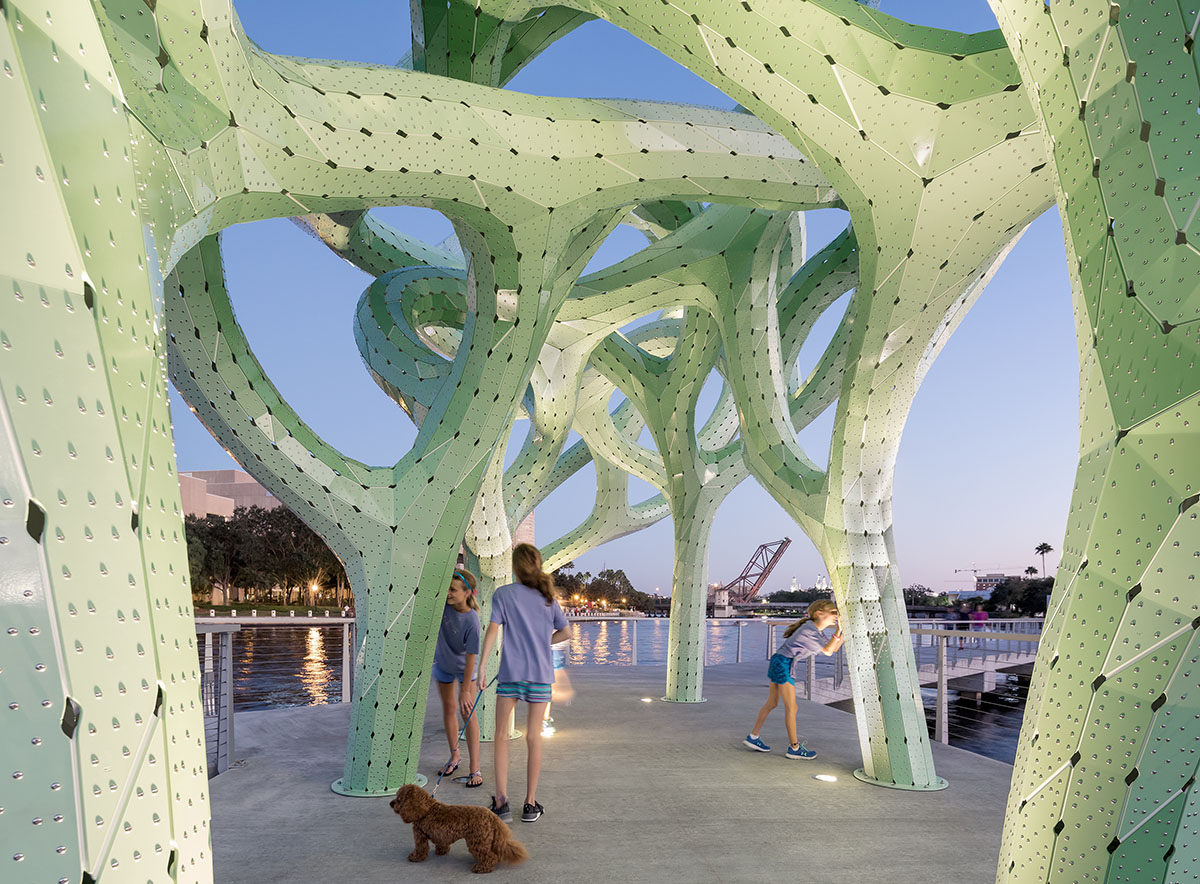 The structure borrows directly from the mangrove and its root forms which can thrive in salt water and sustain the biodiversity of the shoreline.

Form of Wander is an inversion of the mangrove, allowing you to walk under the tangle of roots which often hidden under water. Floating above the river on the pier, its branches are reflected below, producing a familiar image of coastal greenery. 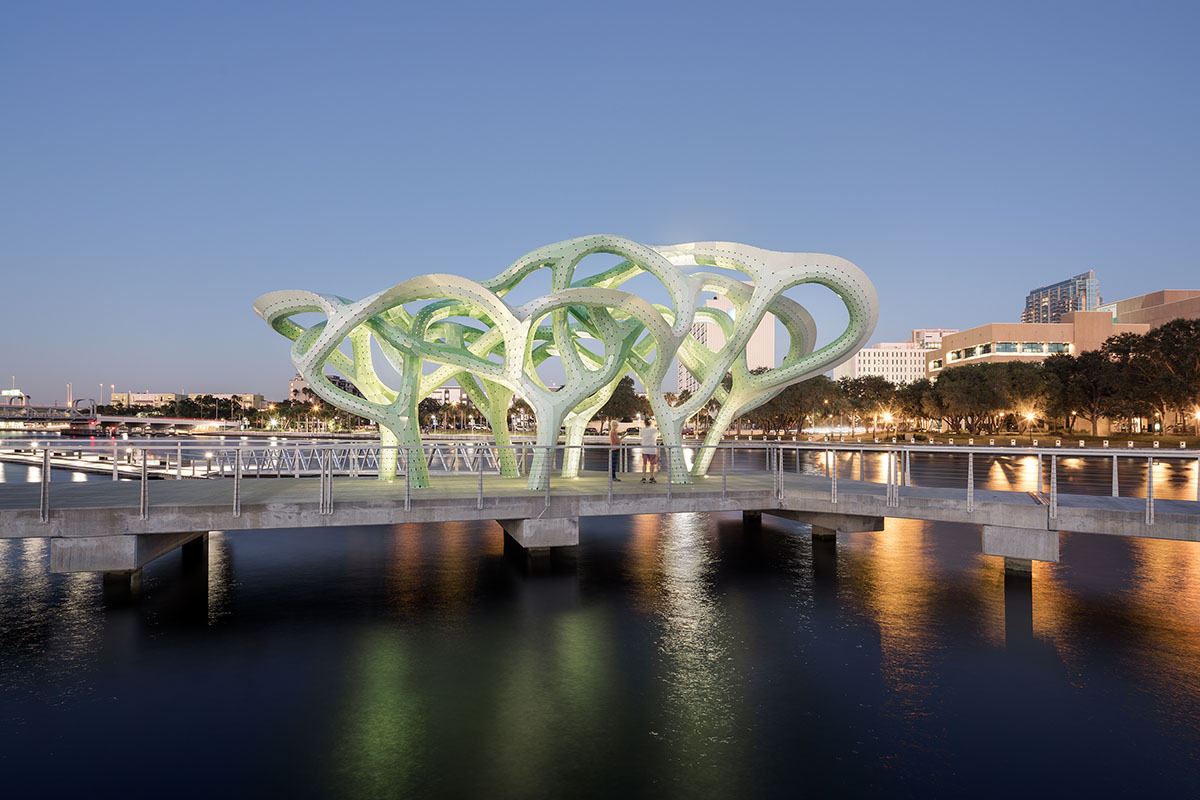