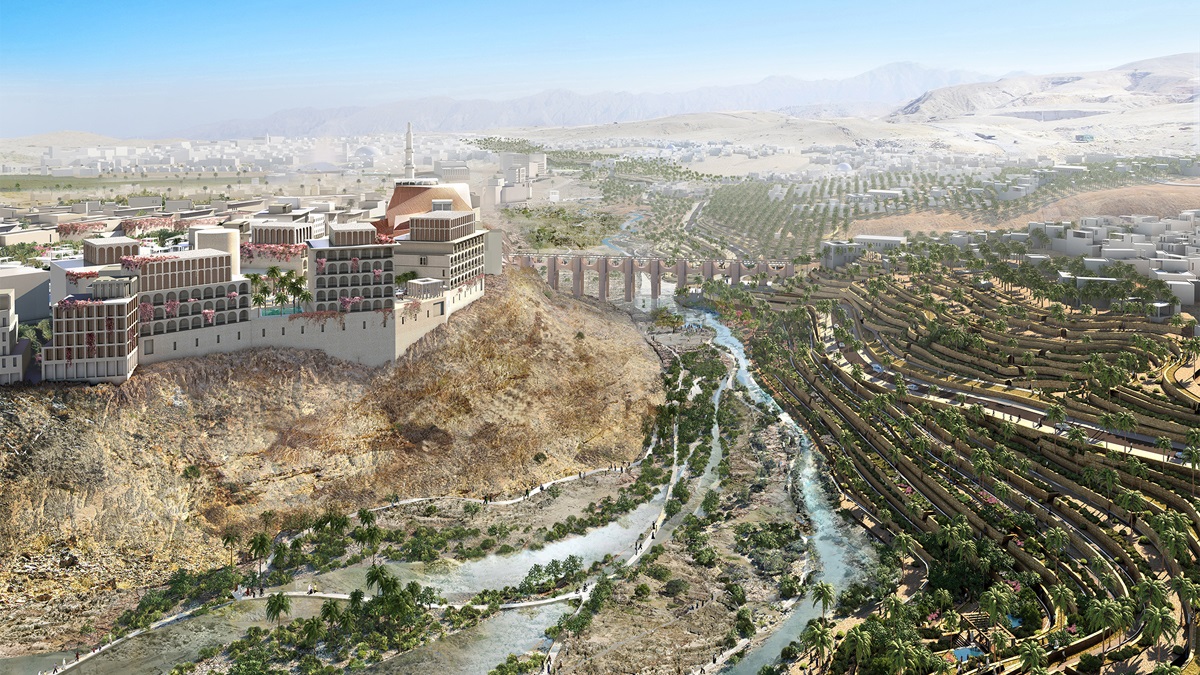 Madinat Al-Irfan is the Oman’s largest urban development project which will create a new downtown area for the Muscat capital district located near the recently inaugurated Muscat International Airport. This project is divided into 6 phases with aim to be completed by year 2044. The target population and employment for the city is 280,000 and 90,000 respectively. 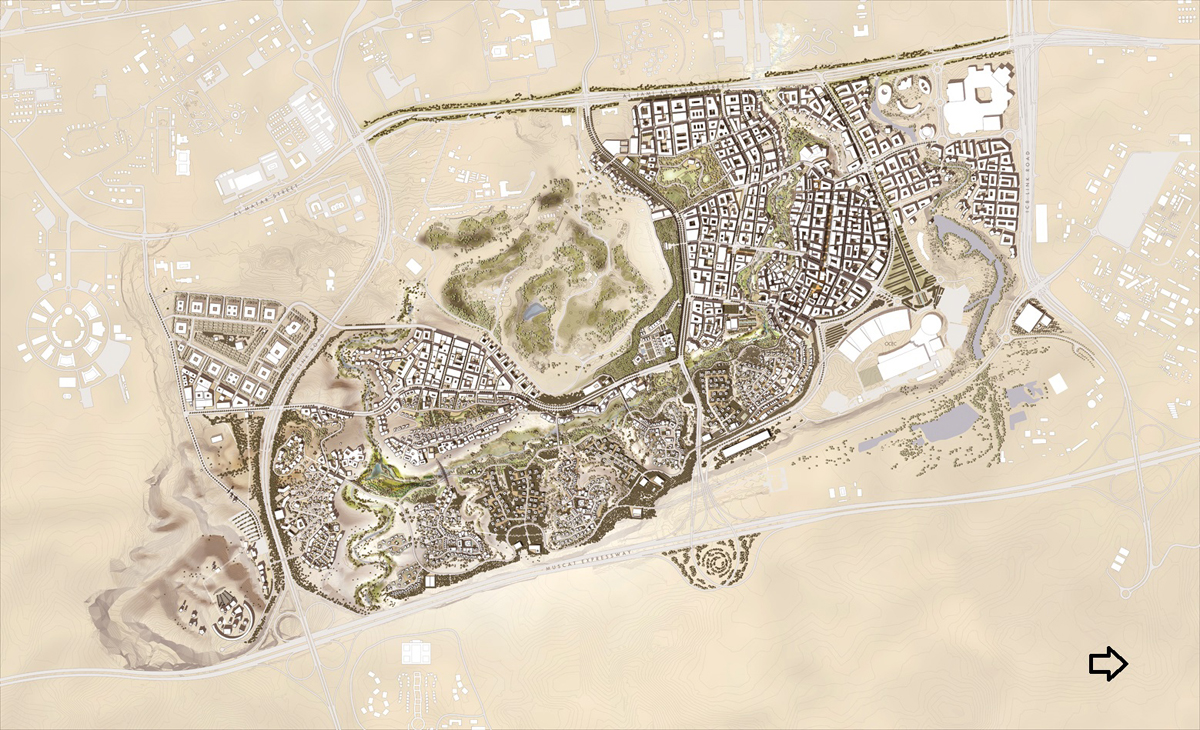 This ambitious project of the government of Oman is the product of an exciting aspiration to establish a new urban centre within Muscat capital area. The total project/city area is 624ha (6.24 sq. km.) and is designed by London-based architecture firm Allies and Morrison, which is a British-based architectural firm. This huge city will establish an integrated, inclusive and sustainable community, catering for different ages, income groups, and nationalities.

The design firm Allies and Morrison is challenging the ‘identikit urbanism’ through this master plan and are aiming to establish “a unique place that feels as if it has always been there since centuries”.

As visible in the master plan and above given picture; the core of the project is the ‘wadi’ which will encompass a big nature park of around 108 ha of area. Number of connection bridges will be crossing the ‘Wadi’ to link the different areas of Madinat Al Irfan together.

Towards north of the project is the Oman Convention and Exhibition Centre (OCEC), Cultural centres and luxurious hotels directly connected to the Muscat International Airport and the major spine of Muscat “Sultan Qaboos Street”. Towards south Muscat Expressway is passing through this city. 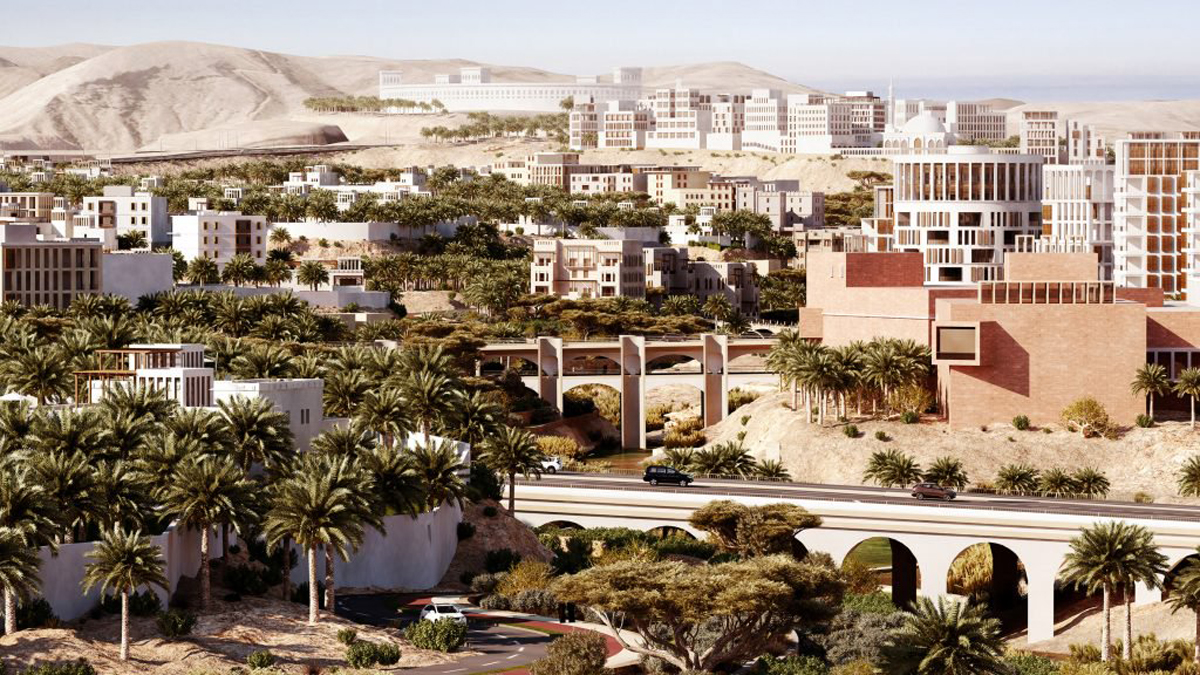 A view of the city. Image © Allies and Morrison

This master plan respects the Omani culture and pays homage to the ancient settlements that were once spread across the country. Green balconies, which will be surrounding the Wadi Park from the southern part, will be designated for household farming, agriculture and recreational purposes. Villages placed on south of the project will provide a more serene area to live in, whereas a new governmental district will be constructed towards the west side of the Wadi park. 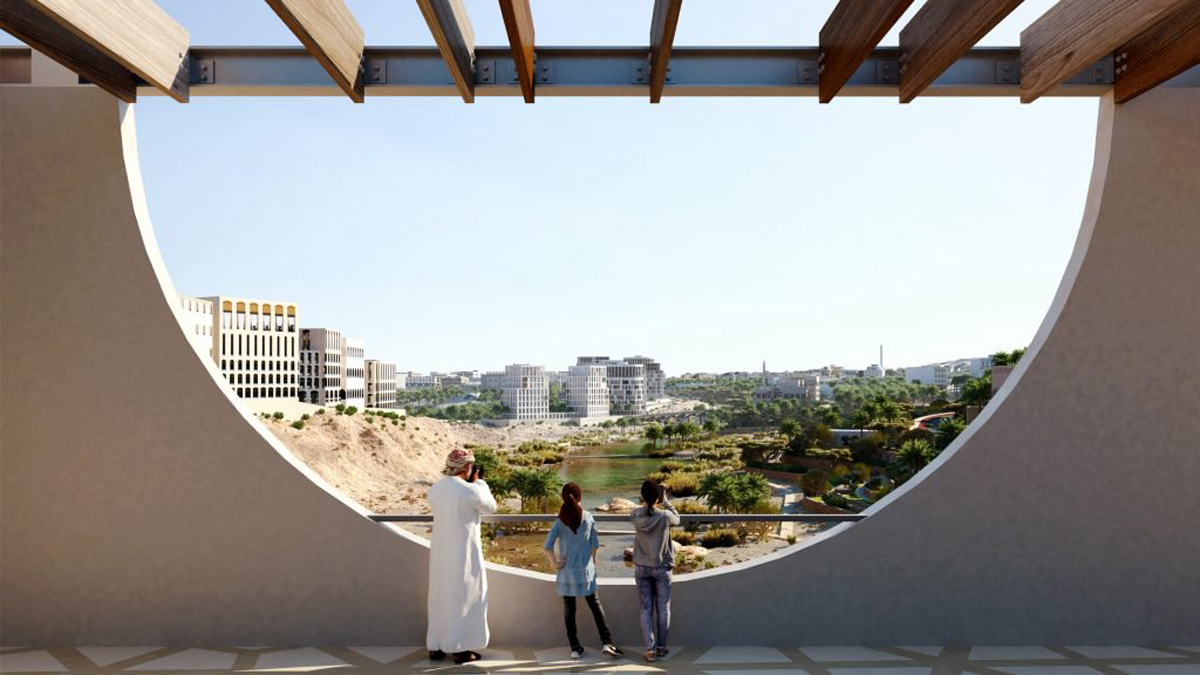 The whole design demonstrates in the shaded streets which will encourage people to walk, rather than use their automobiles. This will encourage pedestrianisation inside the city. Also, the proposed dense layout of the city will decrease the time needed for transport from one area to another and will reduce the carbon footprint. 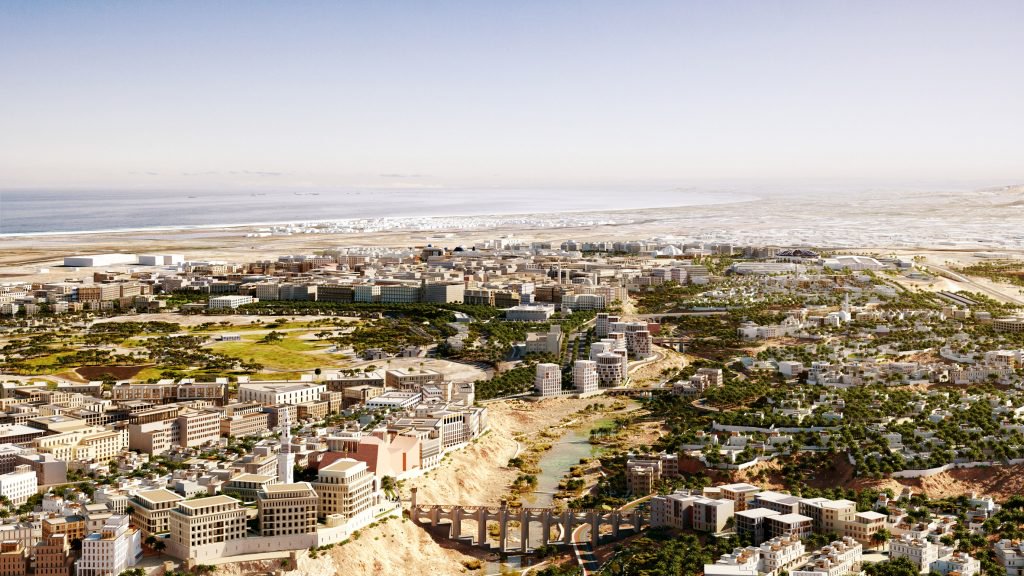 Rainfall management system, utilising reclaimed water for farming to reduce the water consumption and Energy reduction up to 50% with design and technology are the key principles of sustainability in the city. The Phase one of the project was the OCEC, the Crowne Plaza Hotel & JW Marriott Hotel which is already completed and is operational now.

Aerial Rendering of the OCEC (Phase I). Image © omanconvention

The foundation stone for next phase is recently laid by Oman Tourism Development Company (OMRAN) in November 2018. OMRAN and Majid Al Futtaim group (Emirati Holding Company) have a strategic partnership to develop second phase (western area) of this project.

This city is having a potential to become an exemplar both locally and regionally, providing an excellent model for urban development. More than that, this city will probably become a catalyst for change in the residential lifestyle of Oman by setting new benchmarks in terms of sustainability, urban design, providing public transport while creating business opportunities, a centre for tourism activities and a great place to live and work.

Top image: A Wadi traversing through the township. Image © omran

> via OMRAN and Allies and Morrison