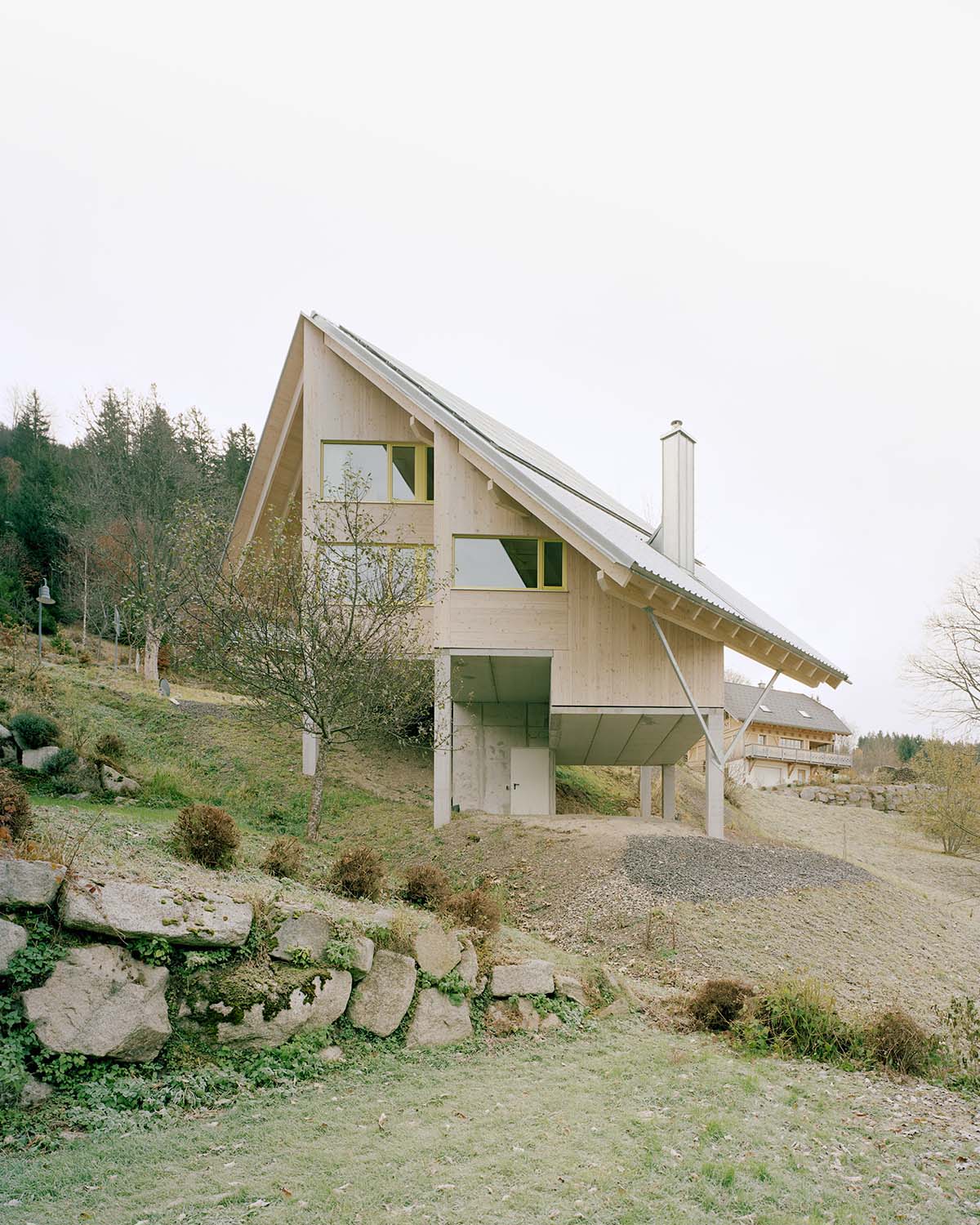 Stuttgart-based architecture studio Amunt has designed a timber holiday home on a hillside of Menzenschwand in Germany. The two-storey house is made of large timber protrusions that define the architectural language of the house.

Named FRIHA, with subtitle House on a Hill, the 110-square-metre building creates different facade perspectives when it is rotated around 360 degrees.

Amunt designed this holiday home for clients, who spend their vacations exclusively in Germany. The clients commissioned the studio to create "a sustainable vacation home" offering an architectural quality that can also serve for other travellers. 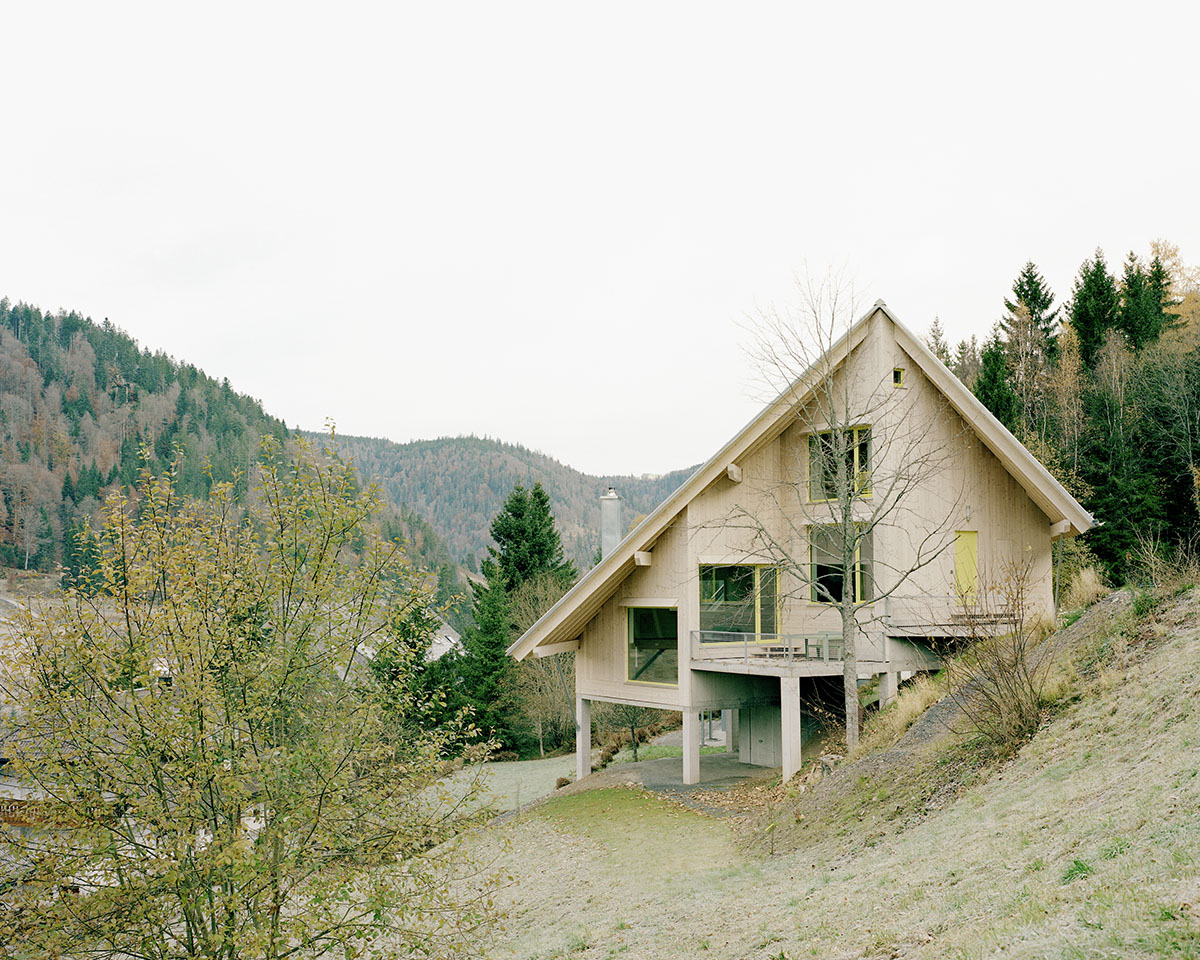 The clients chosen a picturesque village, called Menzenschwand in the southern Black Forest to build this vacation house.

According to the  studio, like many other rural regions, this region has suffered from the departure of younger generations in recent decades and is also struggling with declining numbers of vacationers due to the increasingly warm, snowless winters without skiing options.

The house is located on a beautiful southwest-facing hillside offering a view of the beautiful valley and the village.

"In designing the building, we were guided by the idea of capturing the beauty of the landscape and making the steep slope tangible in the house - wandering vacation," said Amunt in its project description. 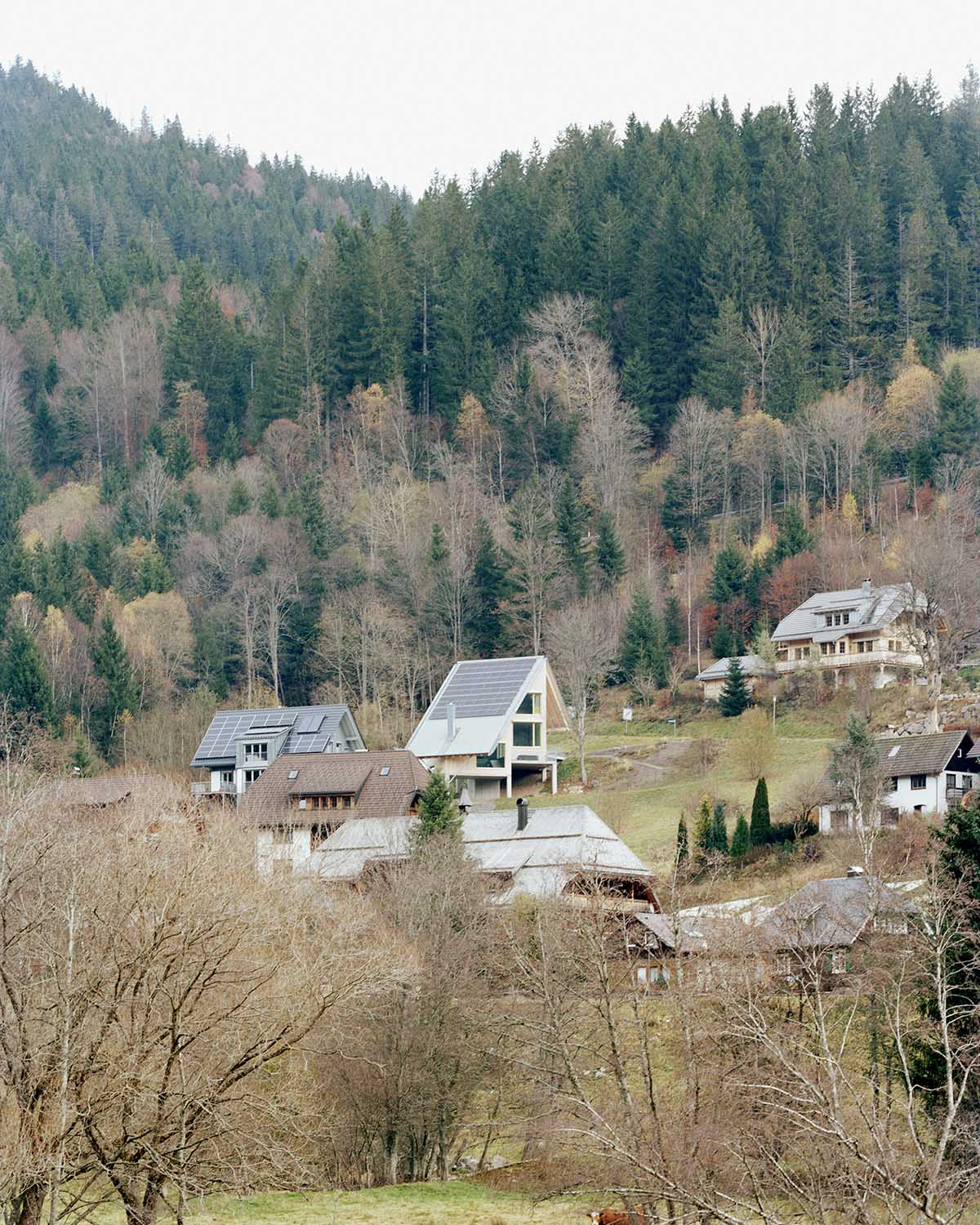 Since the roof pitch, ridge direction, eaves heights and roof overhangs were defined as regulations on site, together with the preservation of the existing, all these elements guided the design principles in development plan.

The studio only used the necessary area to build the house, and "a basement was not required in order to minimize the intrusion on the property," according to the team.

The architects elevated the house from the ground to create a storage area and lounging space under the house, with ground level access from the street. 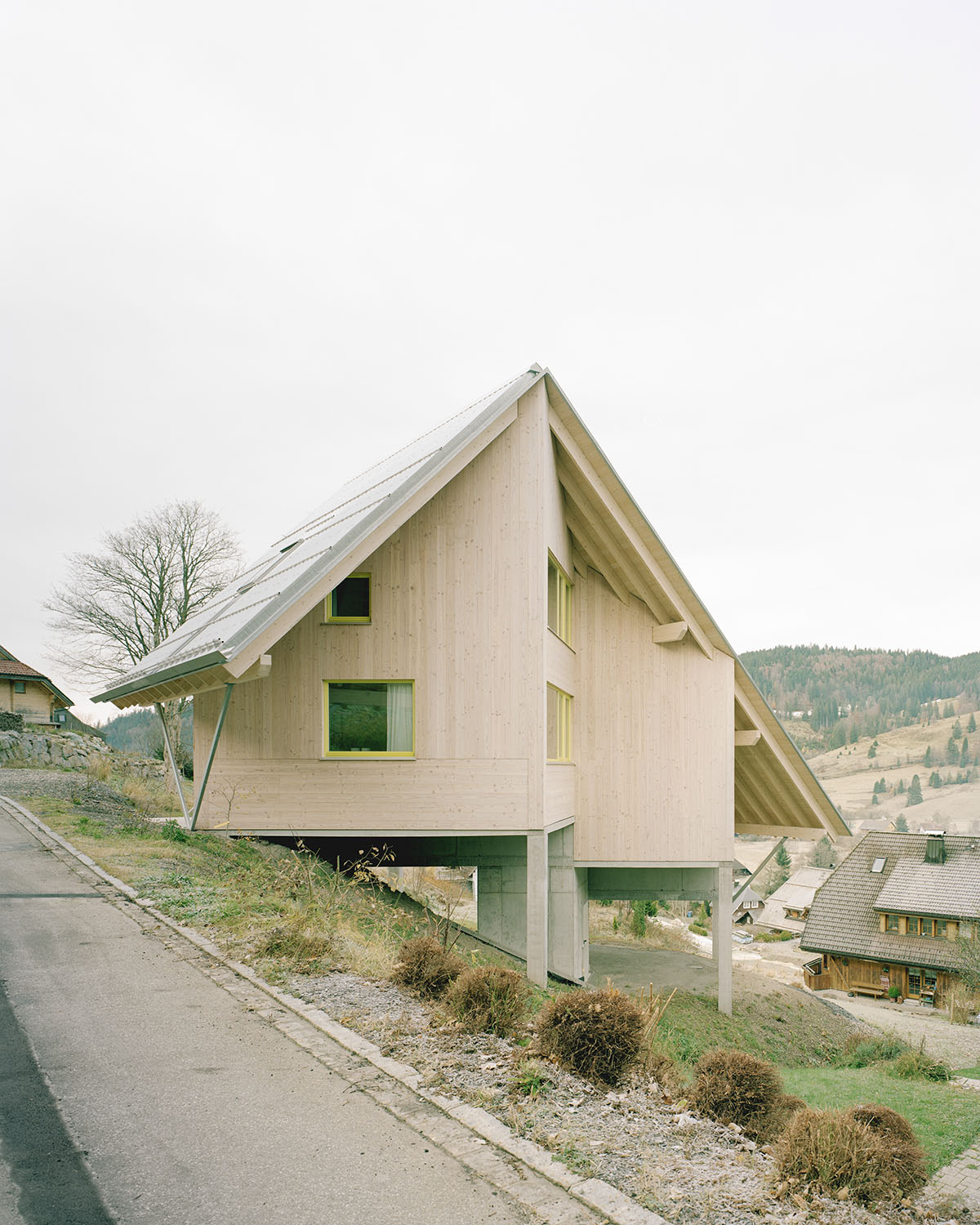 While one corner of the house touches the terrain, the other elevations are supported by slender wooden columns and box-like timber volume which is used as a storage.

The triangular covered front yard provides space for sleds, skis and hiking boots. From here users enter the house and get into the generous two-storey living space with a variety of spatial situations, stepped by spatial steps, following the topography of the plot: entrance with wardrobe, a few steps down kitchen and dining area with a large balcony under the maple, and finally, more steps lead to the living and fireplace room. 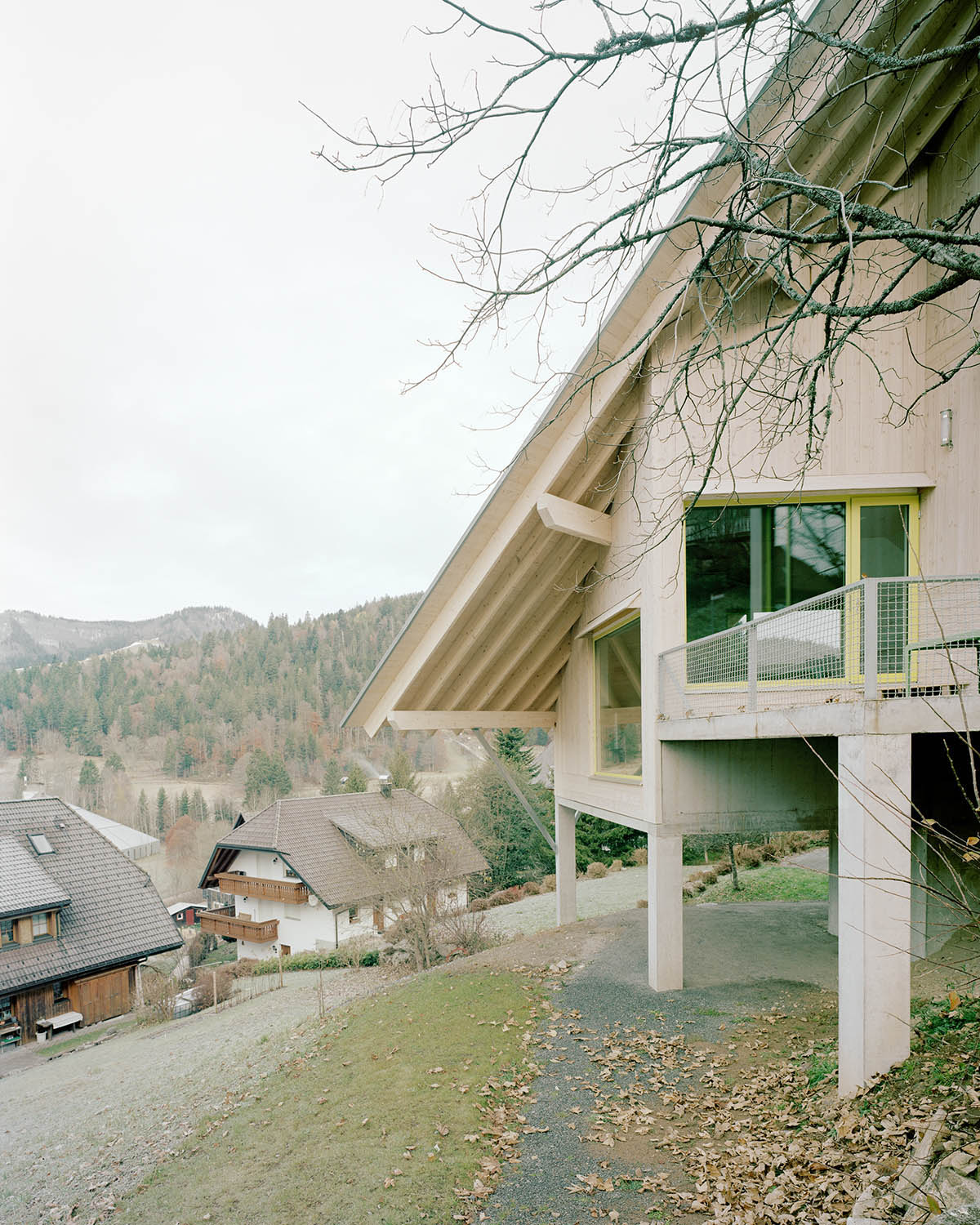 "While wandering through the house, the wanderer is accompanied by numerous, vast views into the valley and the surrounding area, a feeling of being inside and outside at the same time," the studio continued.

"The slender roof shell with the large roof protrusions is placed protectively over the two building volumes, which are angled at 45° to the slope."

"The resulting floor plan organization appears abstract, but its intention is to enable a variety of relations to the site without "sticking" to the neighbouring buildings," the team added.

The house captures the sunlight from the south direction. A central, open staircase leads via a gallery to the upper floor, where small, intimate and very different individual rooms contrast with the generous living space under the protective roof.

The team created maximum-sized openings so that users can benefit from beautiful view from the surrounding. 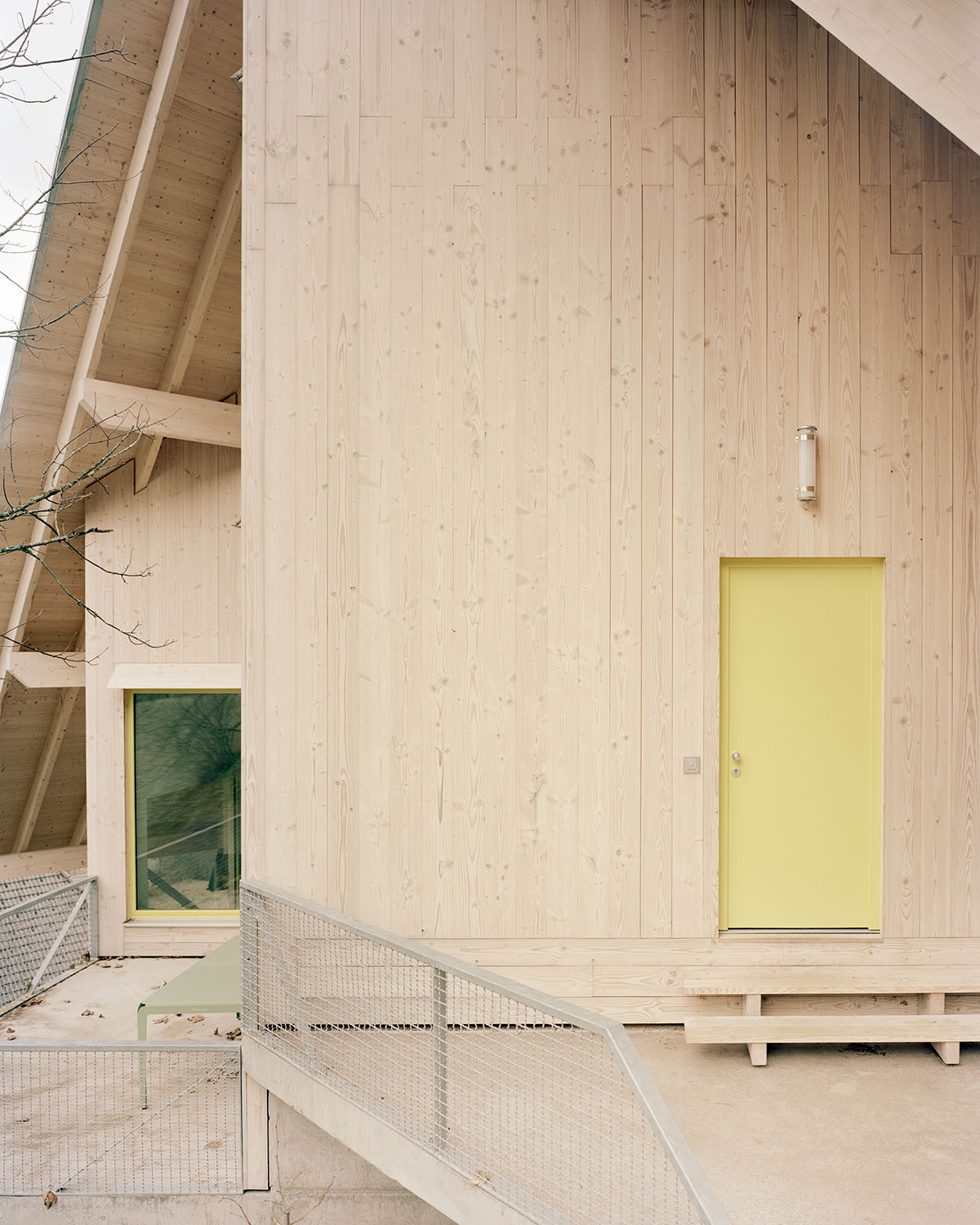 The house consists of various sleeping settings to be able to please and support the vacation feeling: a bunk bed, similar to those in mountain huts, a cosy bedroom reminiscent of an alcove, the sleeping gallery under the roof and a bedroom with a view of the stars. 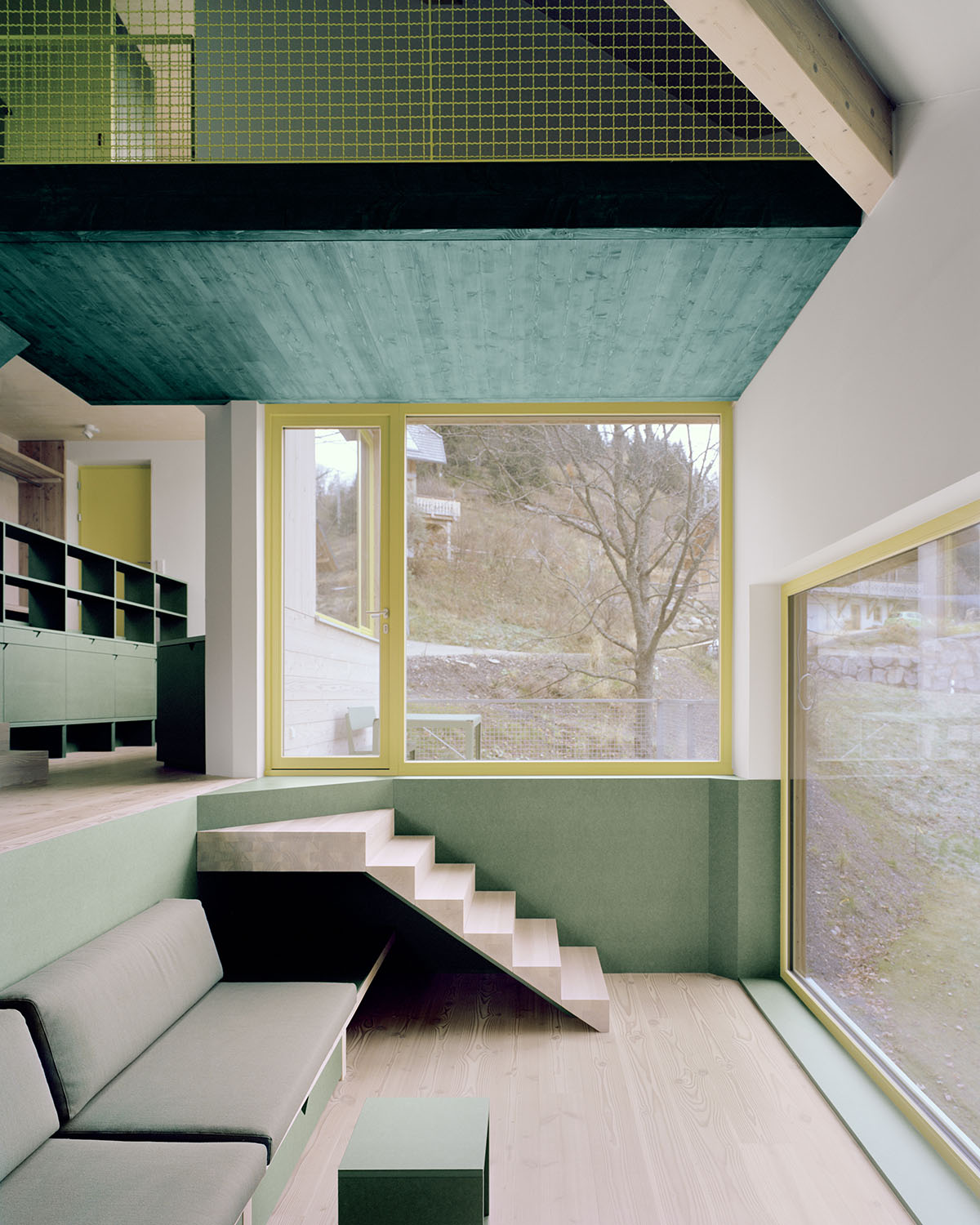 As the studio explained, the energy concept was a challenge, since the house's occupancy can be very fluctuating. "There is no gas connection, and the neighbours should not be bothered with noise emissions from an air-source heat pump," stated the team.

"What could be the solution here - a large or small buffer tank, heat pump, geothermal heating, or something else?," the office added.

In an intensive cooperation with the energy planning company, an experiment has been developed that is mainly oriented towards flexibility. Essential to the well-insulated wooden house are window seam ventilation, infrared heating panels and the use of electricity provided by the large-scale photovoltaic plant on the roof.

According to the studio, recent studies and a doctoral thesis prove the efficiency of this solution. The house itself is used as a heat storage, the wood stove supports the heat production and heating and provides cosiness in the house.

The staggered concrete table supports the wooden structure of the building to protect it from snow and water. 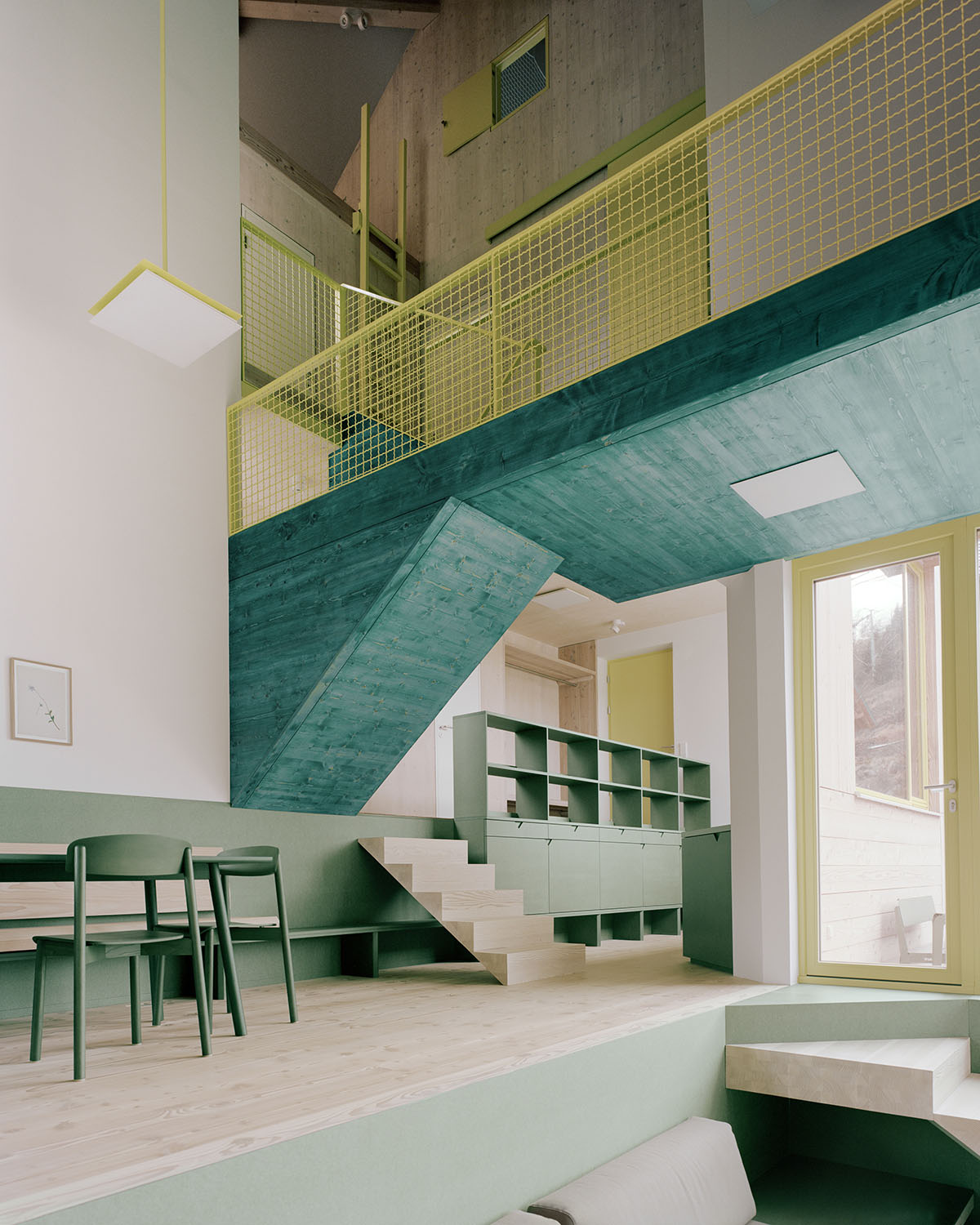 From above, the large roof protrusion protects from the outside the facade sheathing made from native Douglas fir, which was laid horizontally and vertically to reduce waste, depending on the requirements and according to the openings. 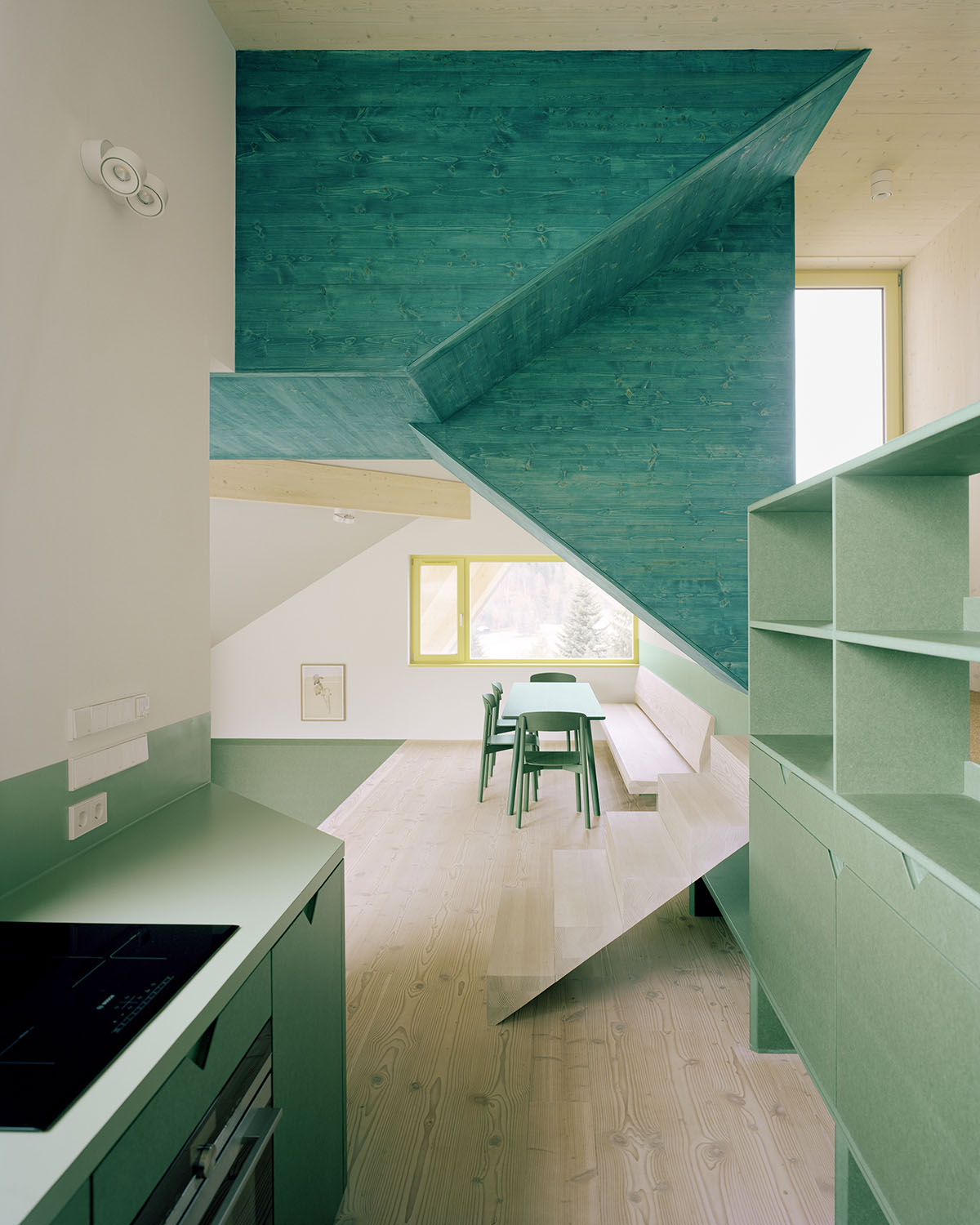 The architects carefully chosen all materials by focusing on local materials, resilience and patina ability.

Wooden floors, and wedge steps of the stairs are made of Douglas fir, the exposed cross-laminated timber elements were treated with white pigmented oil, so as to preserve the light hue of the wood. The window frames pick up on the blossom colour of the maple in front of the house, and the furniture and panelling are reminiscent of green loden.

In contrast, the petrol-coloured staircase body and sun blinds add accents of colour. Overall it is a joyful house with echoes to traditional building forms and building types. A new, casual black forest type. 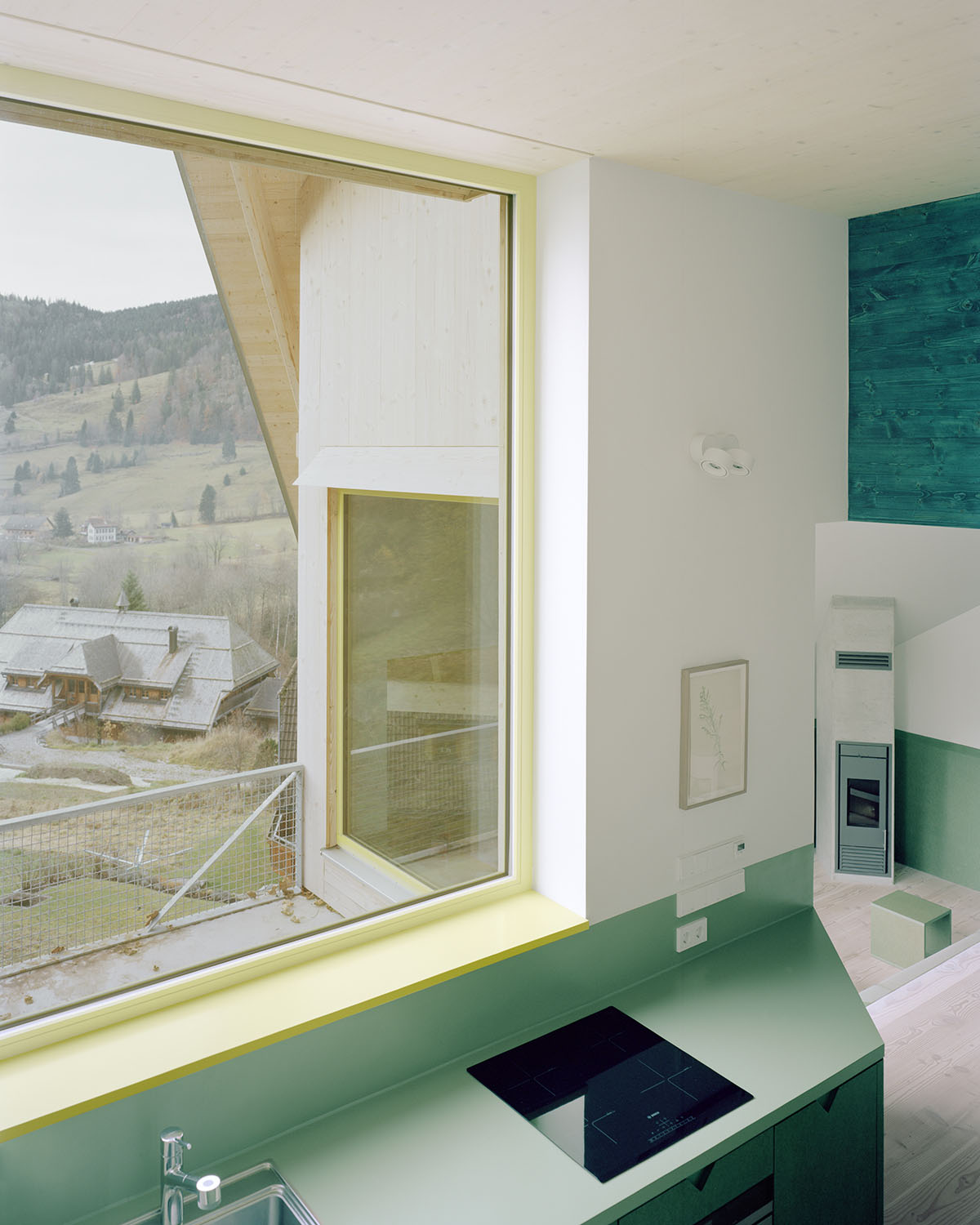 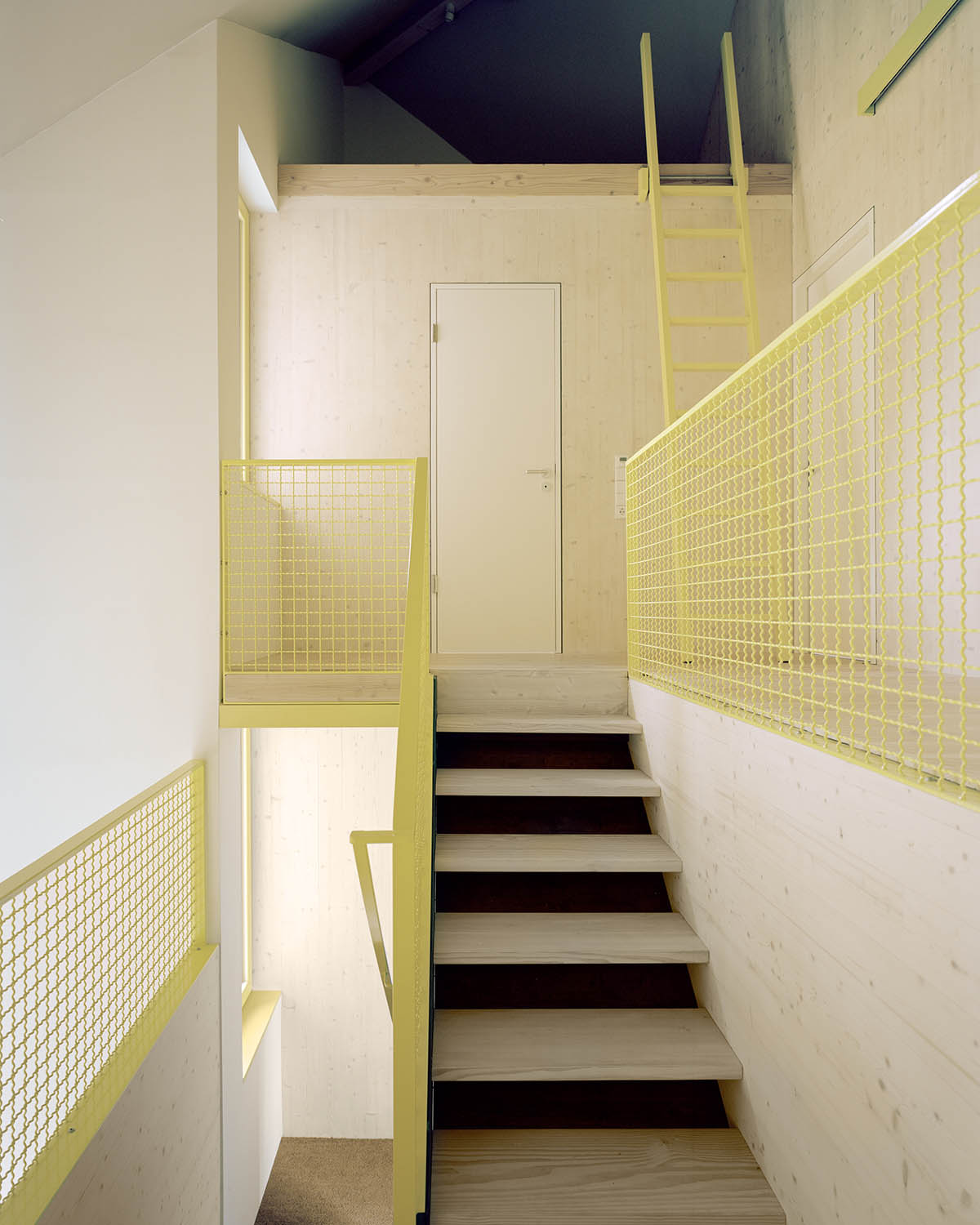 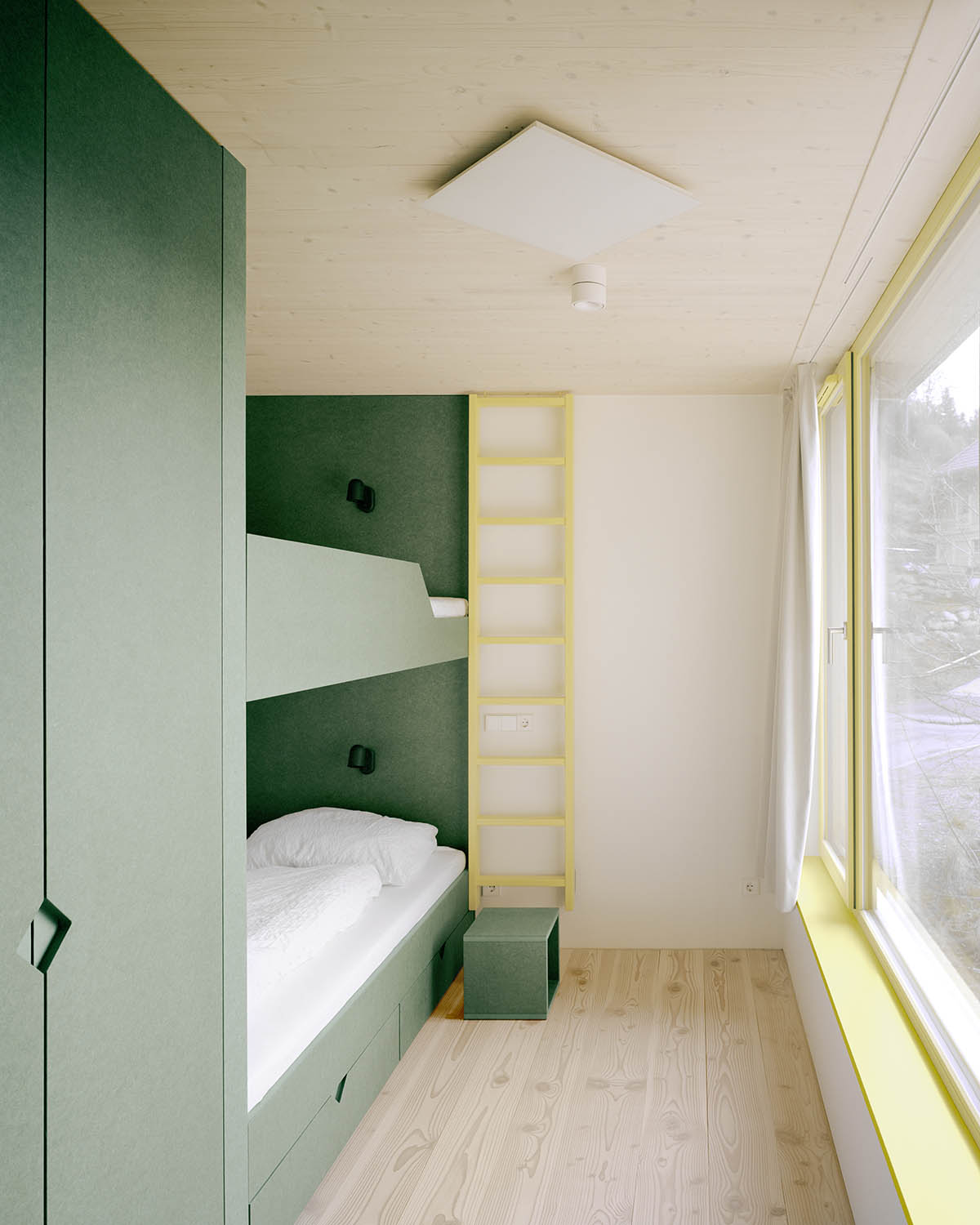 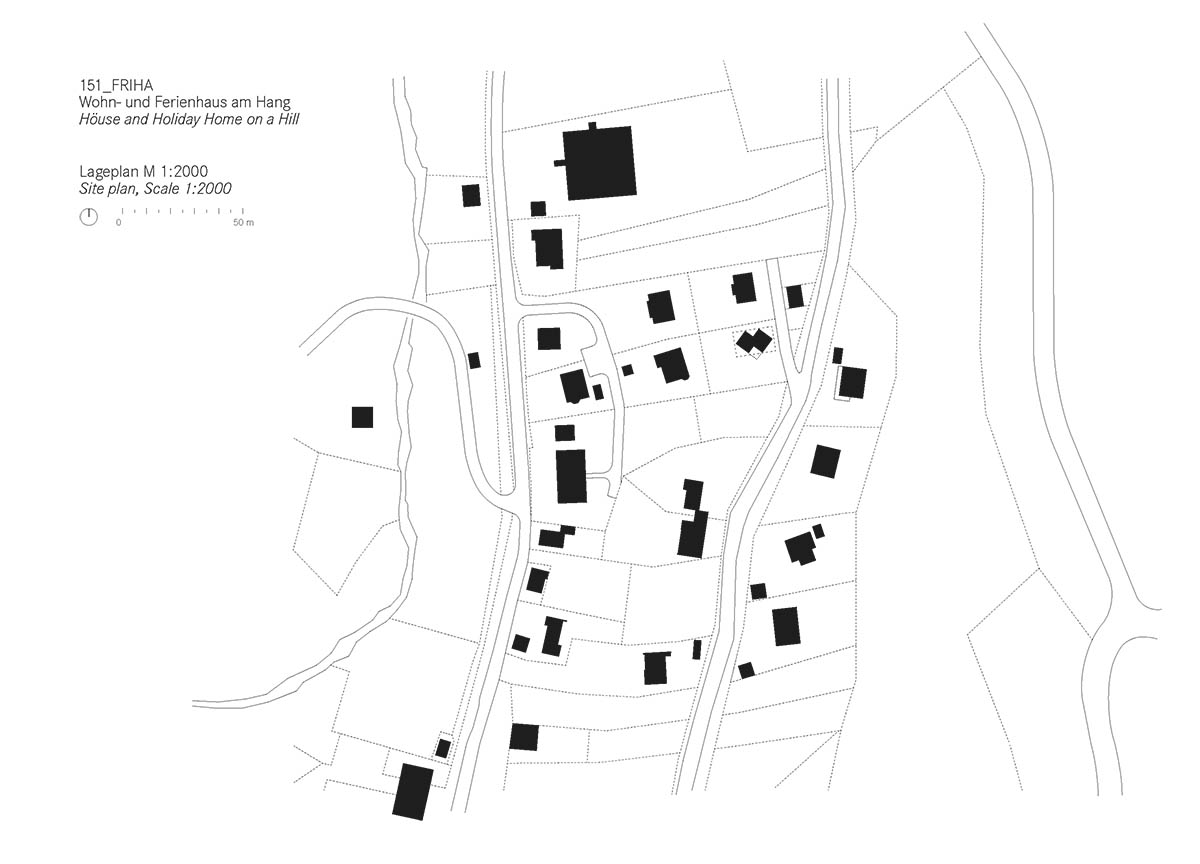 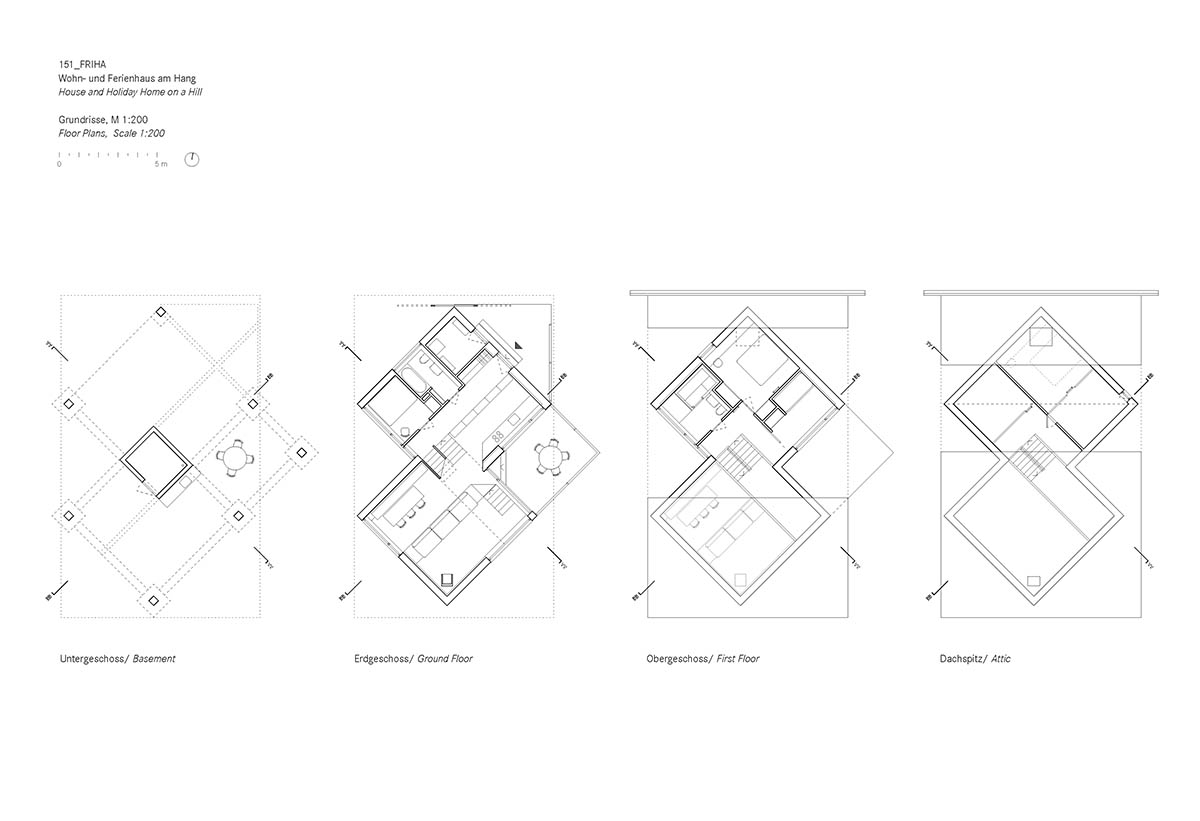 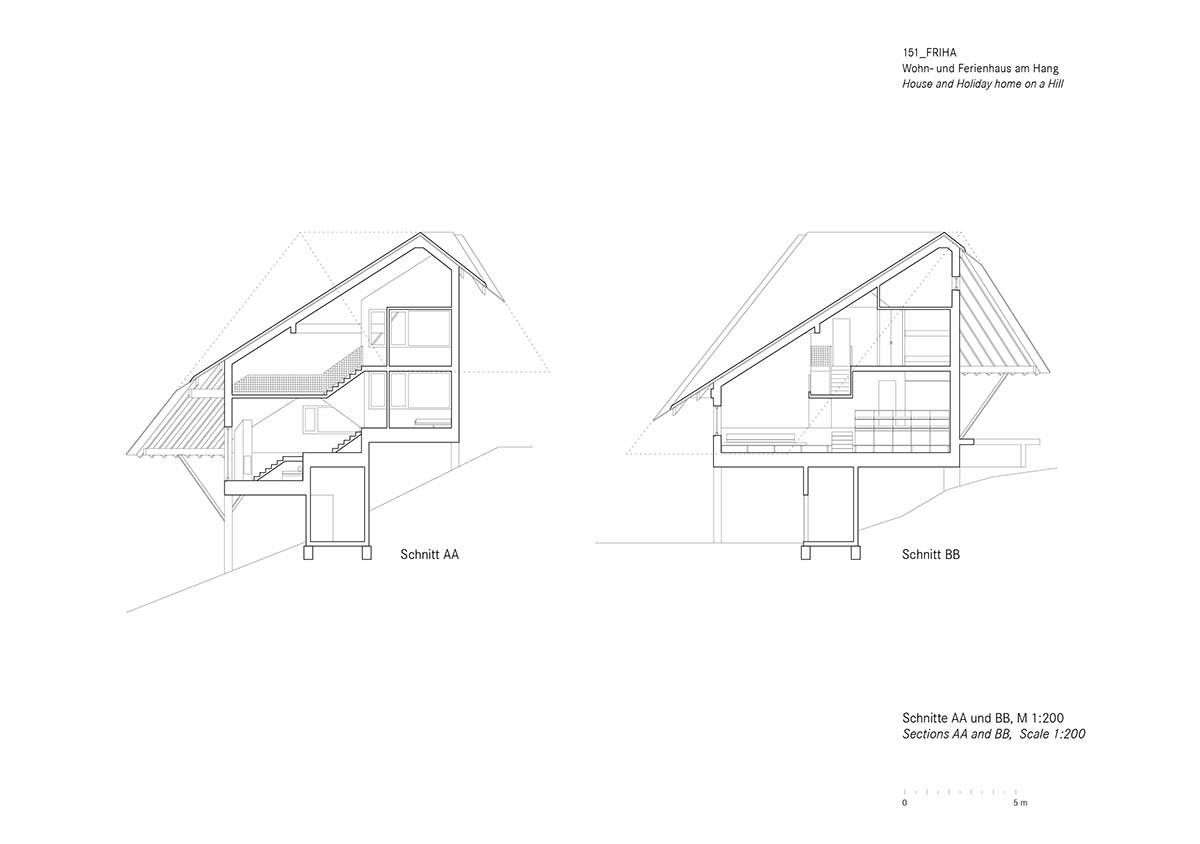 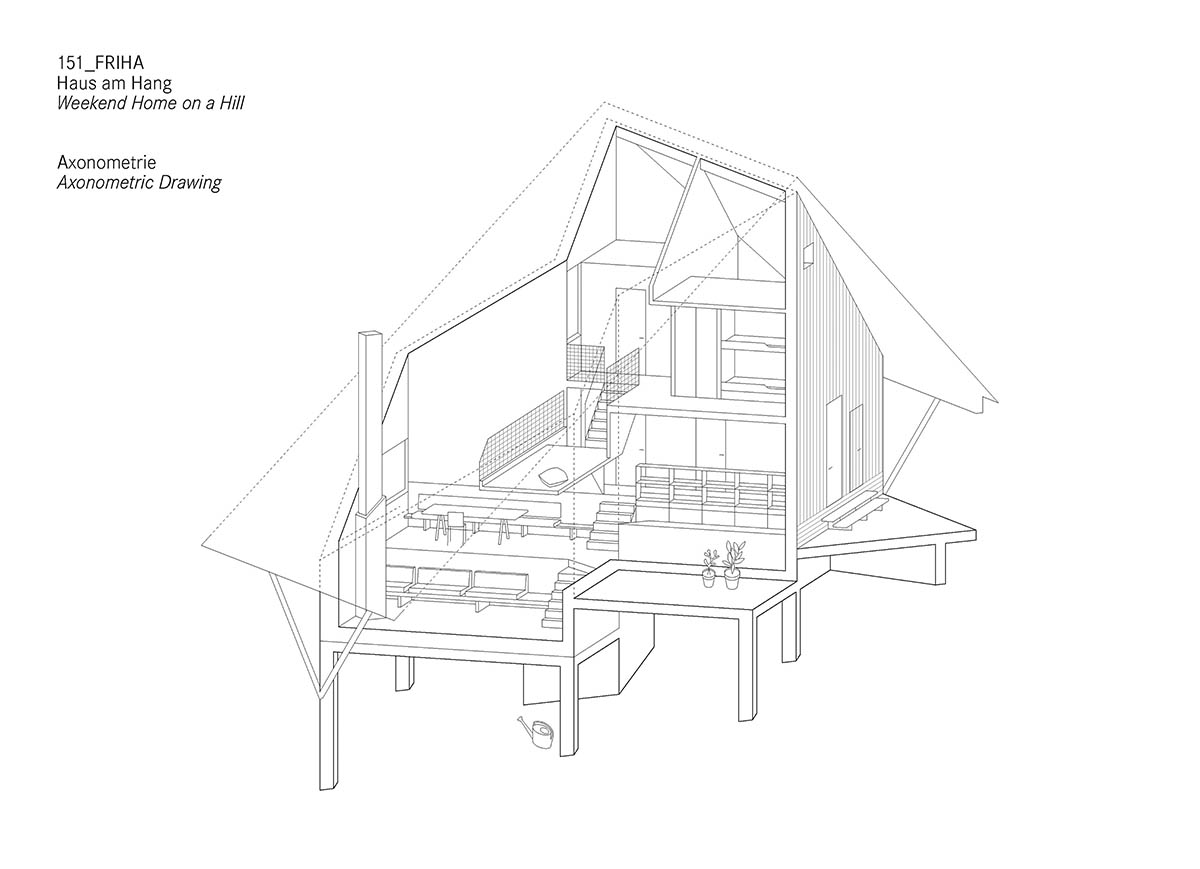 Amunt was founded in 2009 as a collaboration between Björn Martenson, Sonja Nagel and Jan Theissen in Aachen and Stuttgart. The studio designs houses, extensions and interior design projects in various scale.

Subtitle: House on a Hill