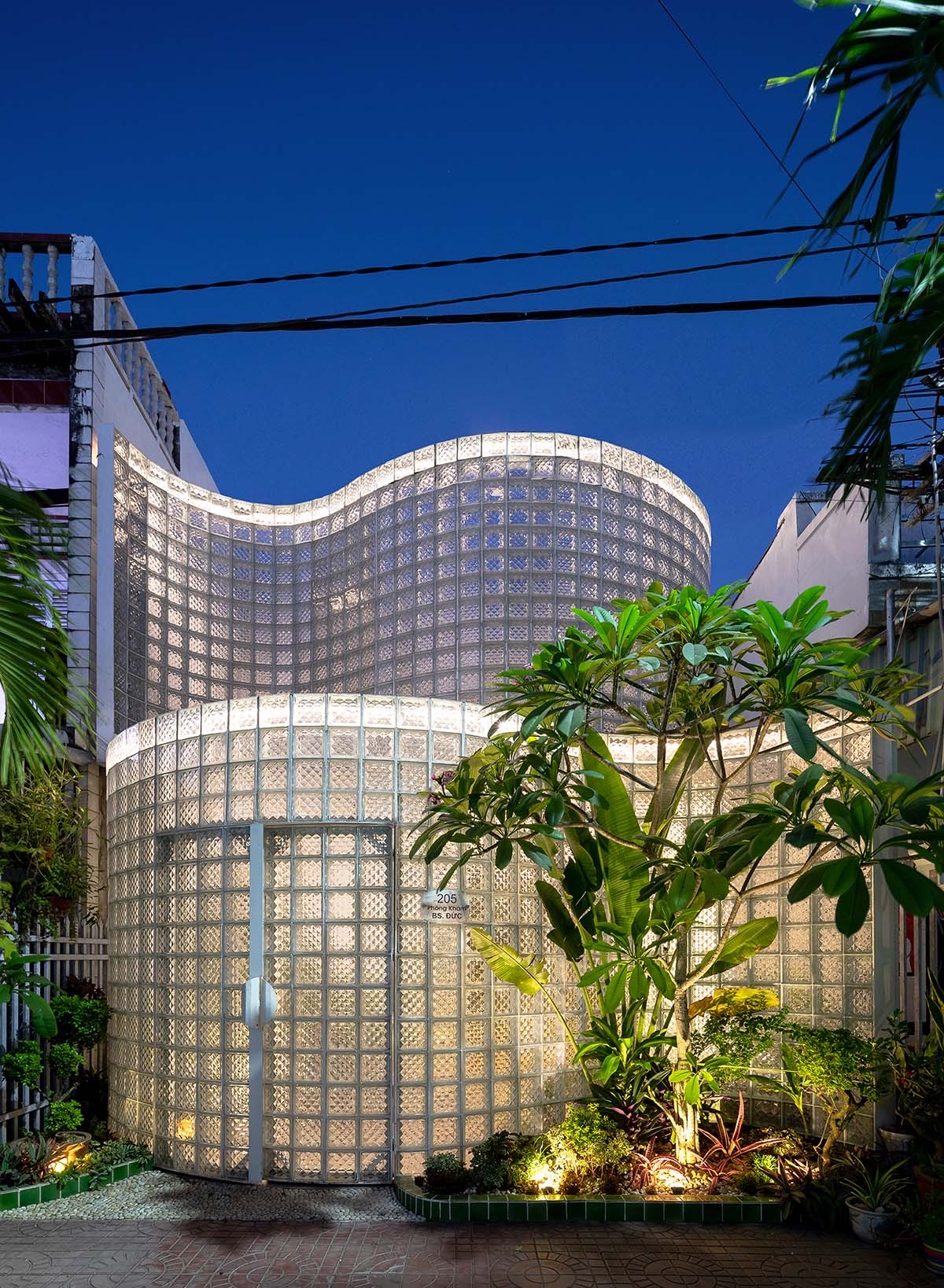 Shimmering in the dark of the night, this family home creates a facade that looks exactly like a coconut, clad in glass brick façade in wavy patterns.

Named CoCo House, the two-storey house, designed by Vietnamese architecture firm Duy Le Architects, is located in the Sóc Trăng Province of Vietnam and was renovated from a pre-owned house.

In the new version of the house, the studio refurbished most of the furniture and equipments since the pieces had a nostalgic value by the family (in exception of kitchen area and ceiling fans). 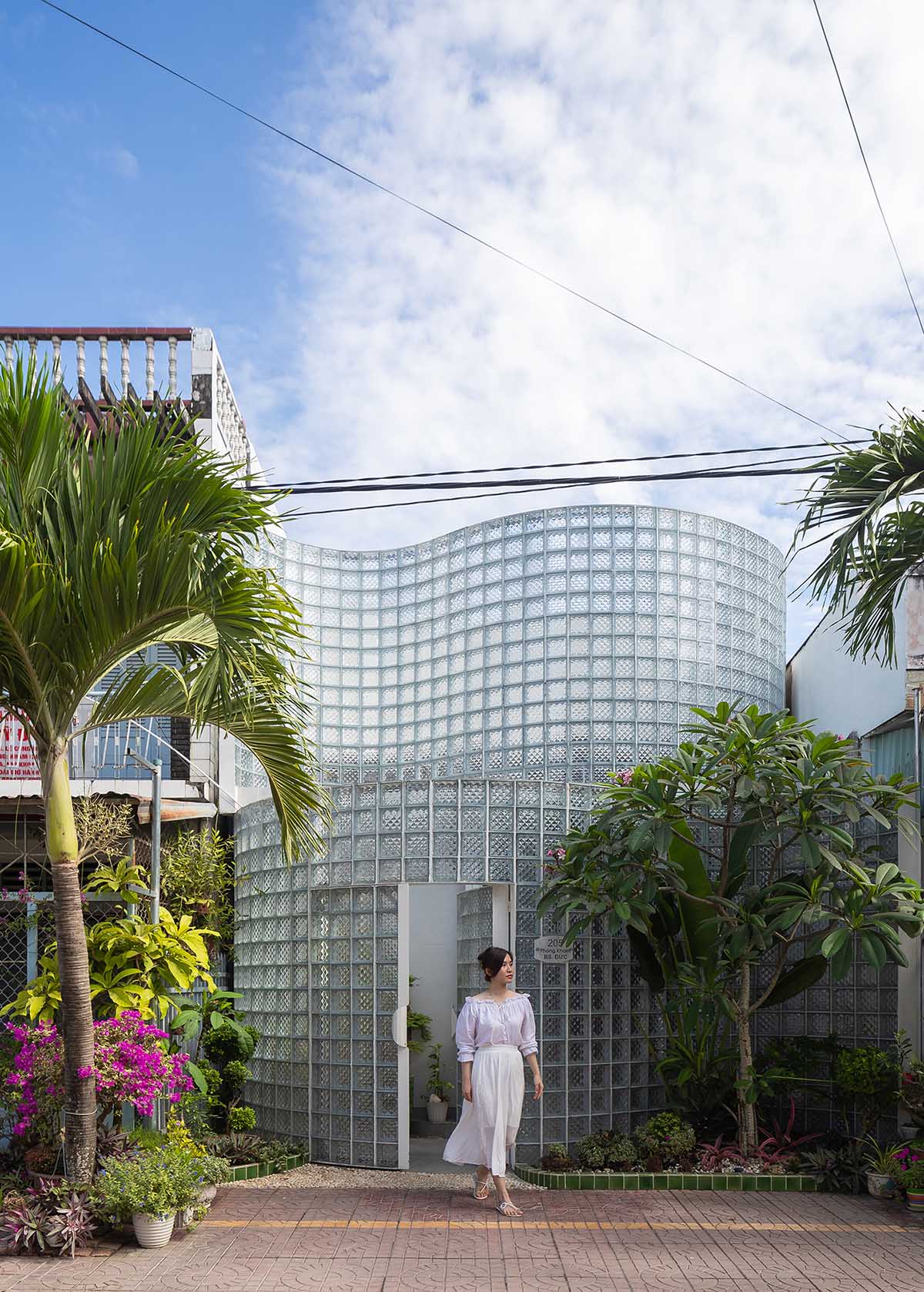 The 142-square-metre house was designed for two middle-aged members: a doctor and a retiree person. The house's construction was completed in only four months.

The vague representation of the curved and glowing façade arouses great curiosity as to what's going on inside. 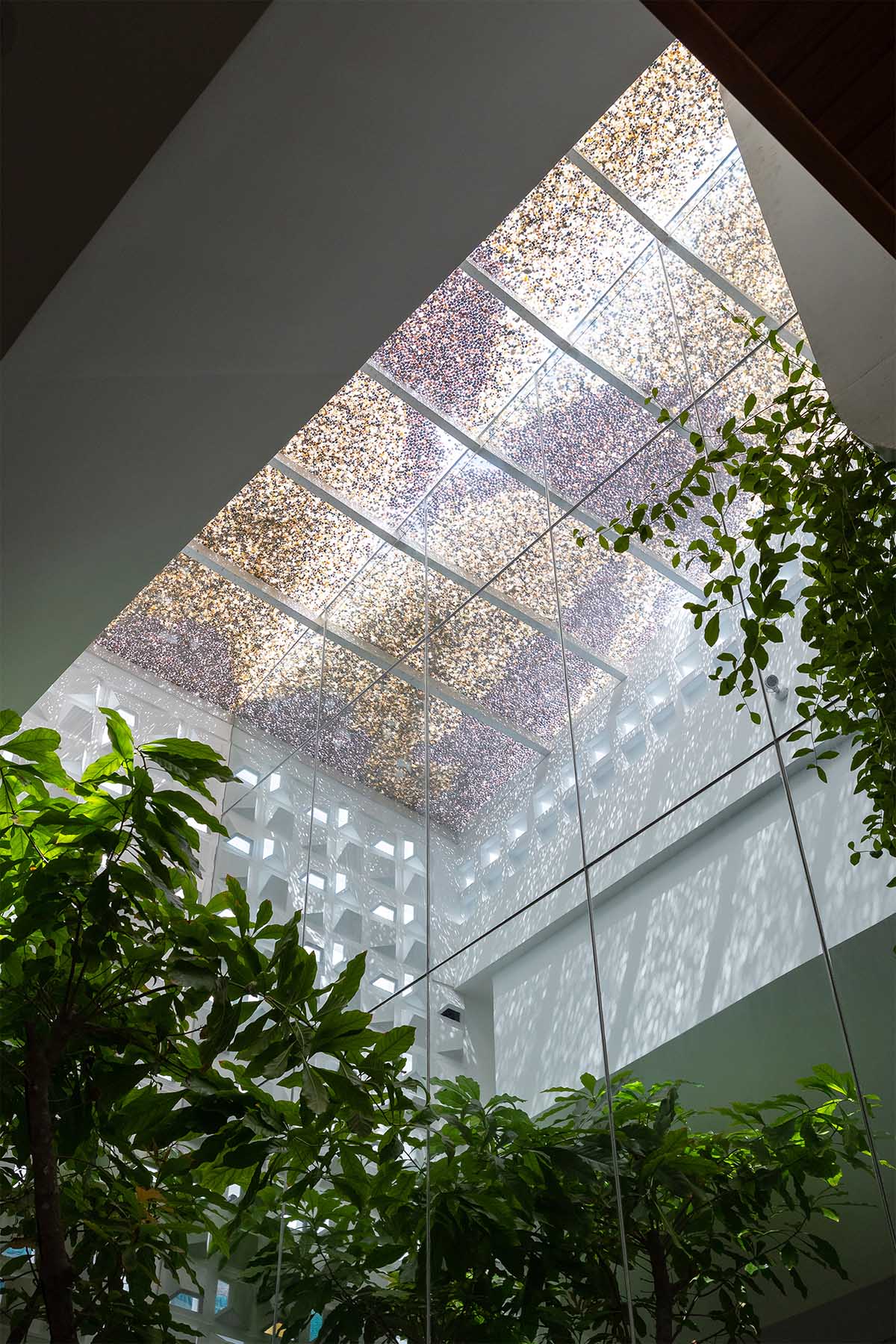 To design this house, the architects are inspired by a famous animated film, titled CoCo, released by Pixar in 2016.

The main focus of the film is based on the theme of family affection, the connection between generations and family members, despite not being in the same world.

Based on this inspiration, the architects wanted to create a new sense of space, merging the reality with virtuality through the arranging art of glassy materials. 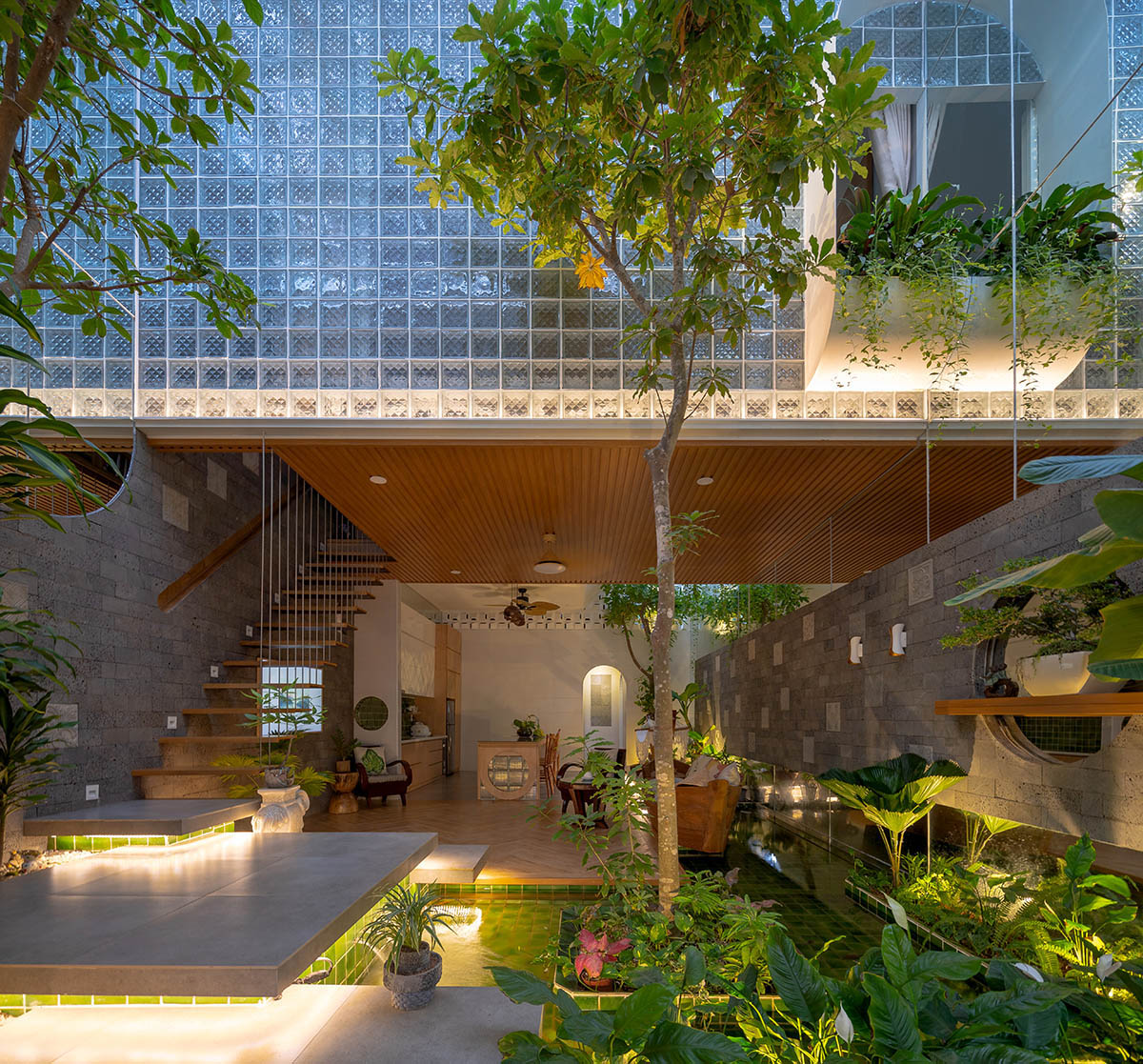 The result is a special effect manifested by the glassy materials that would create a duplicating illusion and provide a spacious sense to the house.

The width of the house is only 4.6 metres in reality, but inside, it enriches the ways it represents in a special configuration, using green infills, plants, fishpond, five different-sized gardens.

The house has some specific angles, for instance, owners can have an infinite within the house. 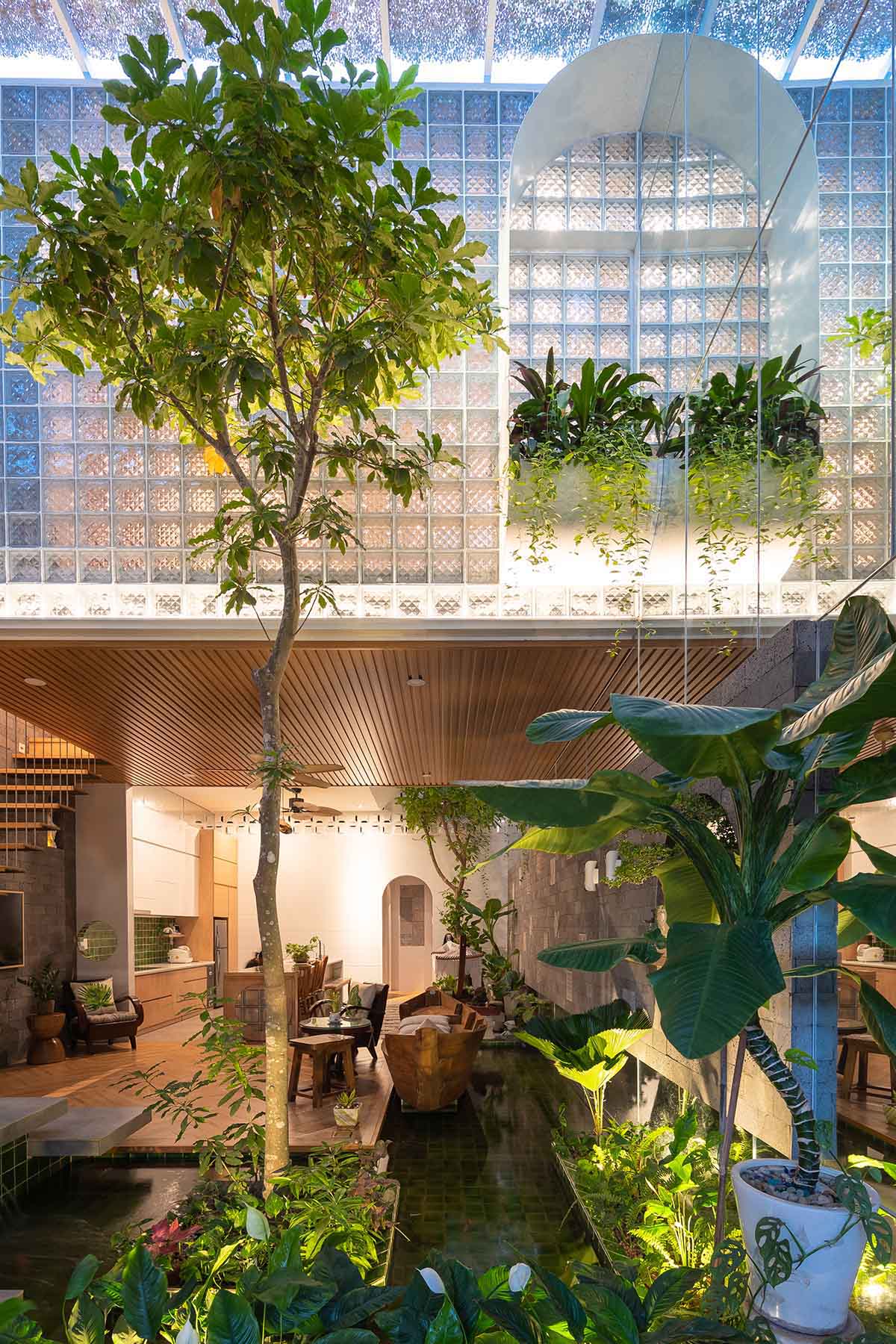 "Some details in the house are only half-designed and once reflected by the mirror, they will review the complete pattern. You can see the details of the window arches in the reading space on the 2nd floor," said Duy Le Architects.

According to the studio, "this is a method to amplify the space for a narrow-width townhouse, which boosts the feeling of space expansion and also brings to life the concept that the architect wishes to convey into the building." 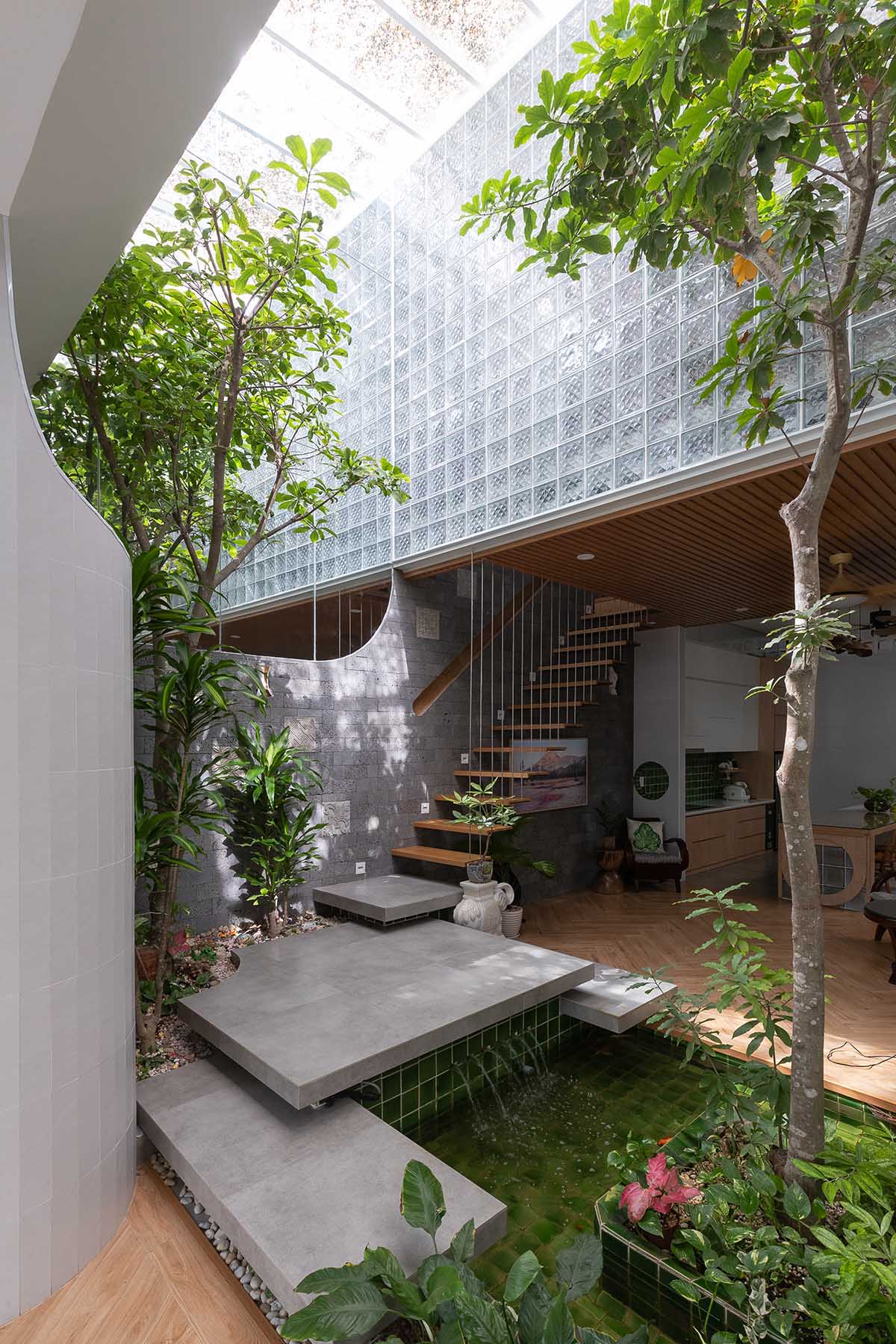 The house is also characterized by some specific demands by the client. For example, the client requested a huge area that can be used for planting and Koi fish hobby with minimalistic and spacious style.

The new design allows the client to maintain his/her daily routine such as relaxation area - with hammock, private area for clinical service. 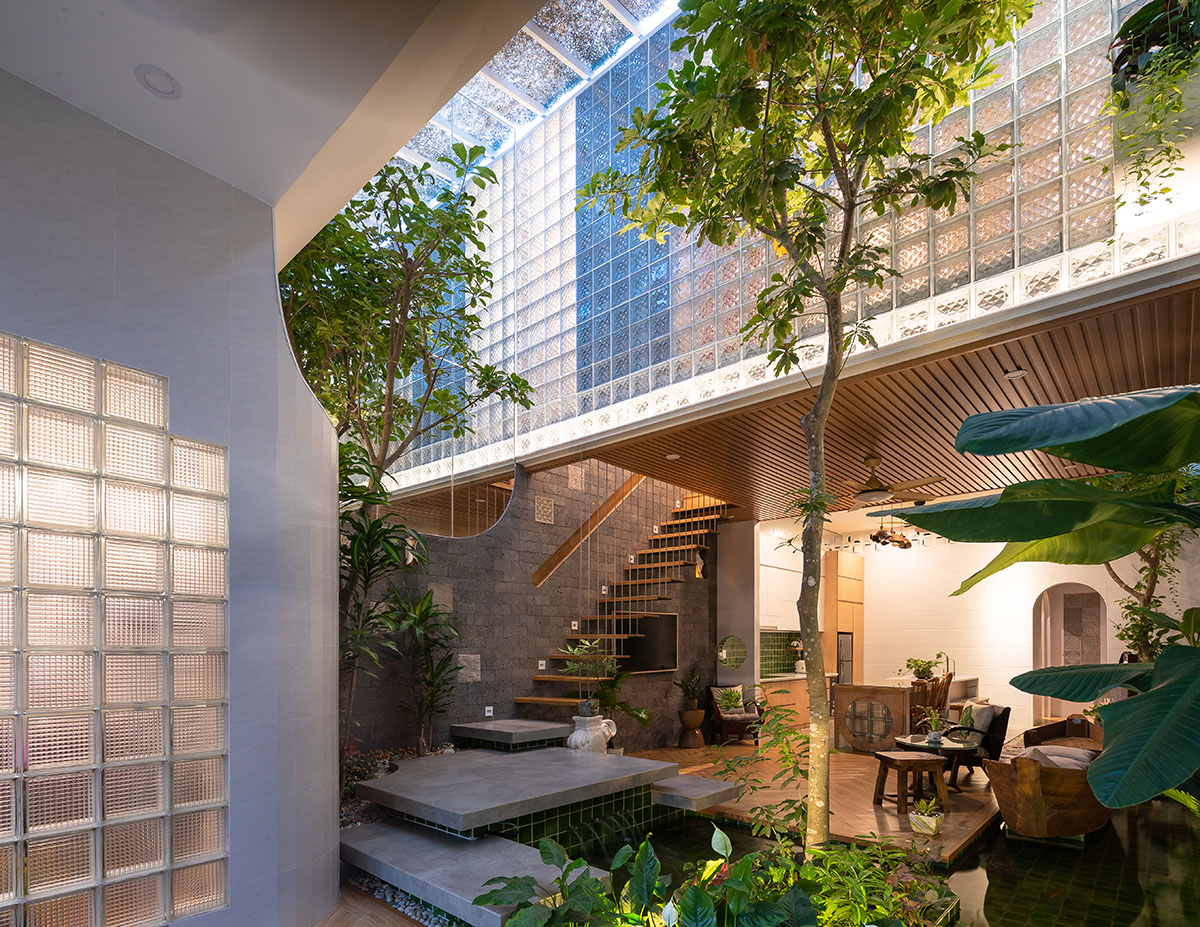 Mainly, the house functions as an accommodation and a working place. The studio also possesses some specific technical details in the house.

The architects integrated a fishpond and a garden into co-living space, meeting the client’s demand for a huge area catering his/her planting and fishkeeping hobby under a constricted space. 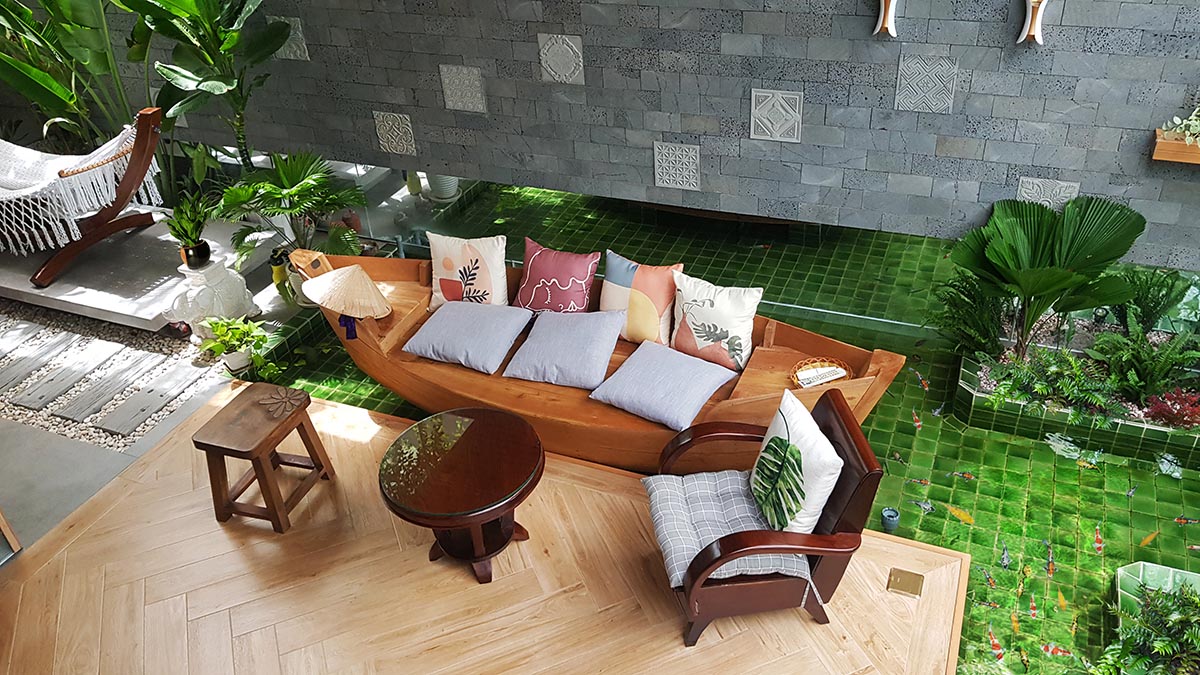 In addition, the architects have incorporated these areas creating a co-living space. "The fishpond not only provides a scenic element but also adjusts the microclimate for the living space," said the studio.

The use of creative materials and configuration become key design components in the project. The house is clad in glass brick to imitate wave patterns, which visualize the Western water region of Vietnam as well as emphasizing the aesthetic curve of the façade. 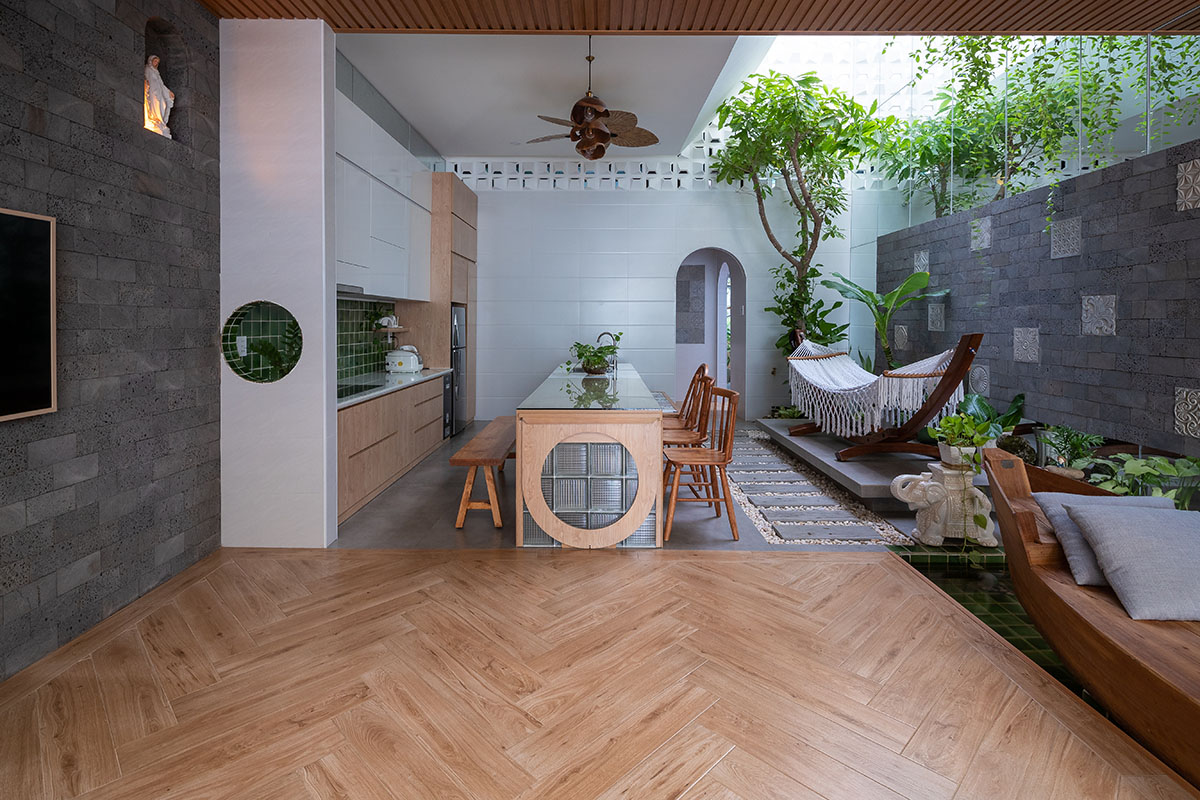 As the studio explained, "the glass bricks not only guarantee privacy for the open space within the house but also provide enough natural lighting."

The studio uses ventilation brick in the house, ensuring protection from rainy weather. This material also allows air circulation from the façade to every nook and cranny (view the cross section). 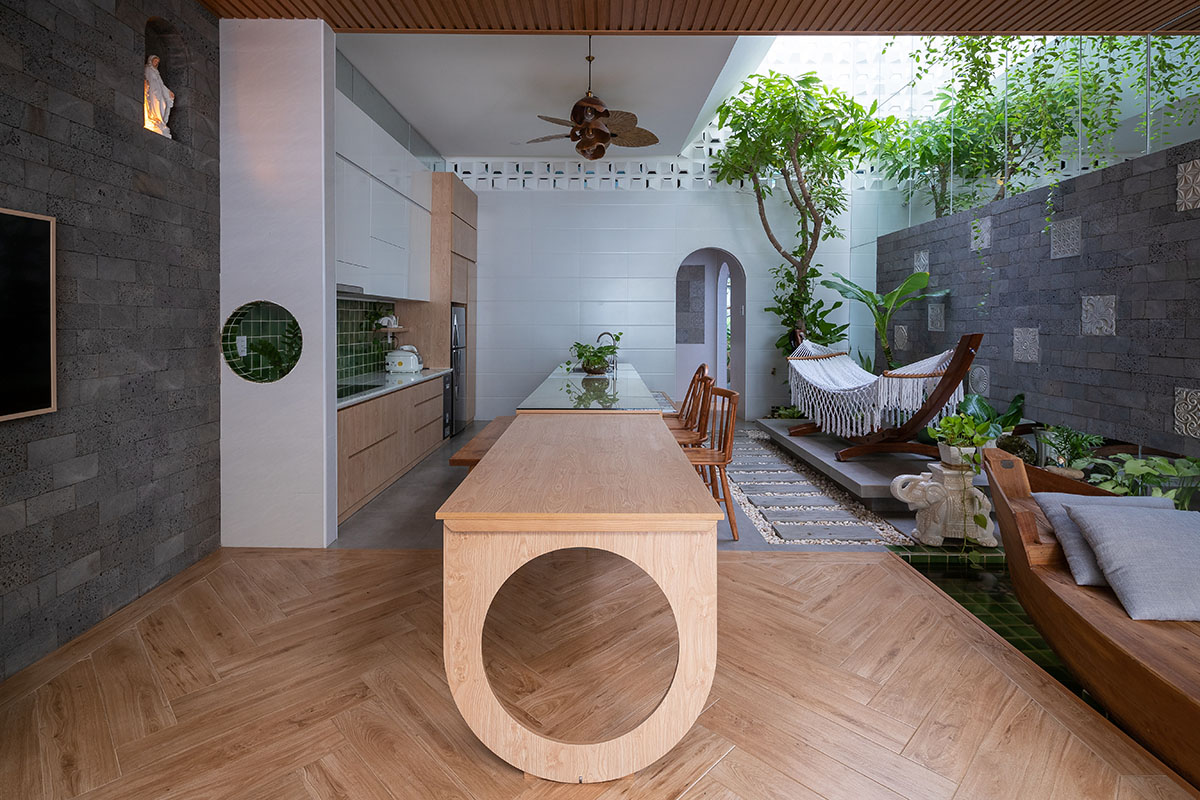 "The selection and arrangement of the ventilation bricks, which have been under thorough consideration from the architect, are set up in different directions for aesthetic aspects as well as functioning as drainage and ventilator," the studio added.

The architect has also merged the living room and kitchen into one unifying space through the art of “space-lending”. Therefore, the kitchen and dining space can be adaptably expanded by adding a dining table with 6 to 18 seats for special occasions or for large groups of visitors. 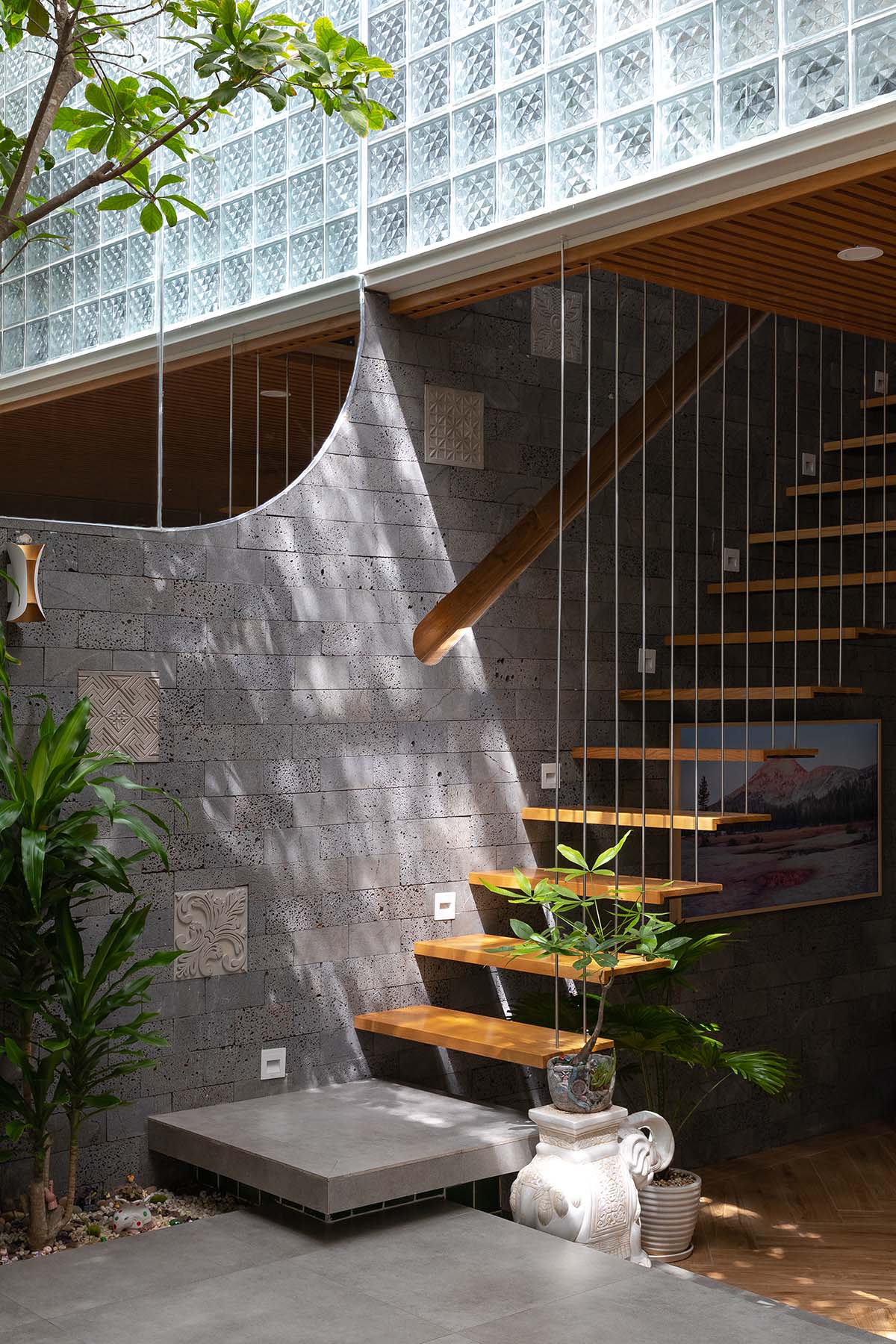 Microclimate is also another aspect in design to provide a proper indoor temperature and climate for users and the house.

To achieve this, the studio designed five different-sized gardens which not only align with the planting hobby of the client, but also act as noise suppressors and dust prevention. 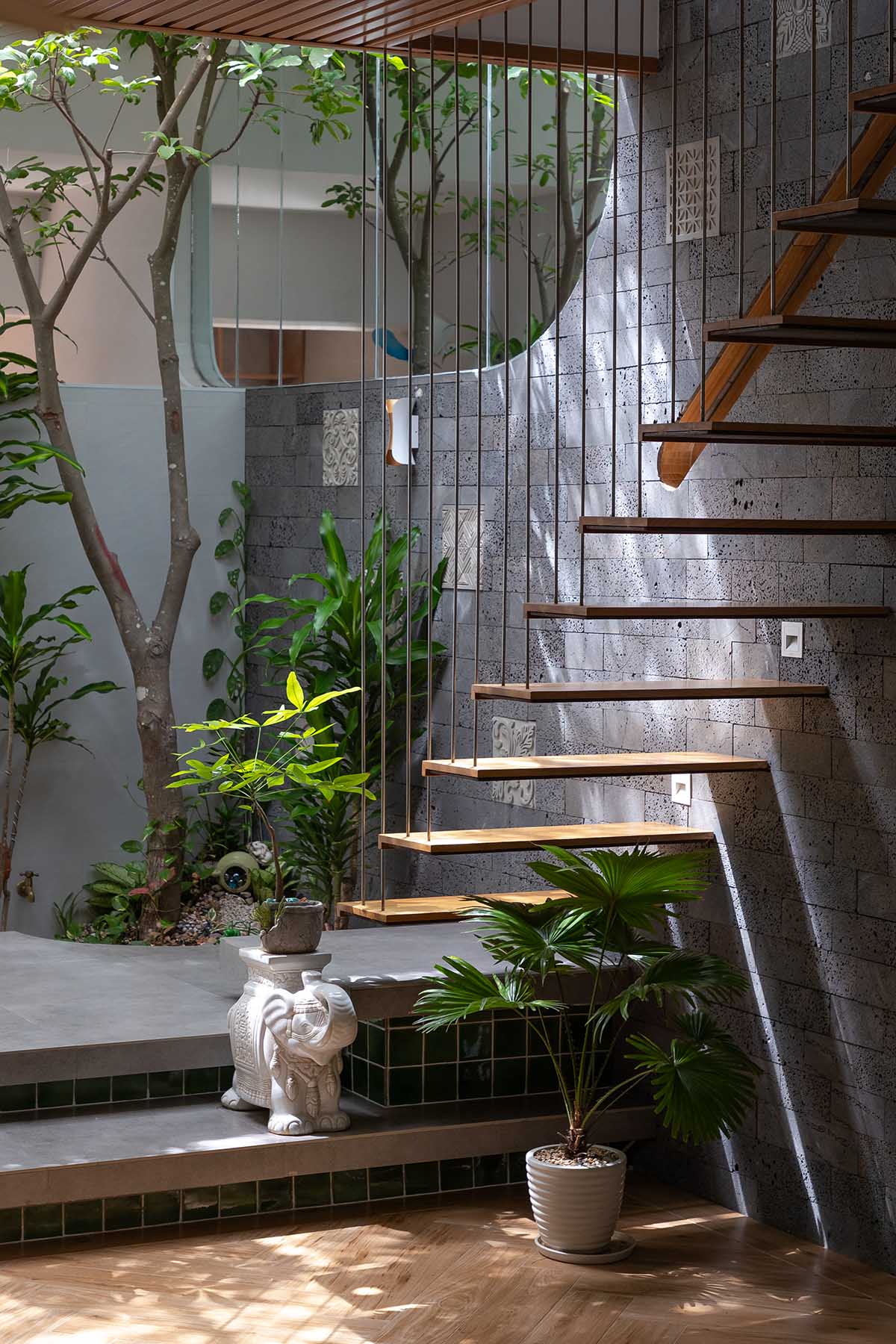 Across the glass roof, the studio scatters marble pebbles to regulate the light. "It helps the light reflect across the living space creating a luminous effect which is suitable for daily activities," added the studio. 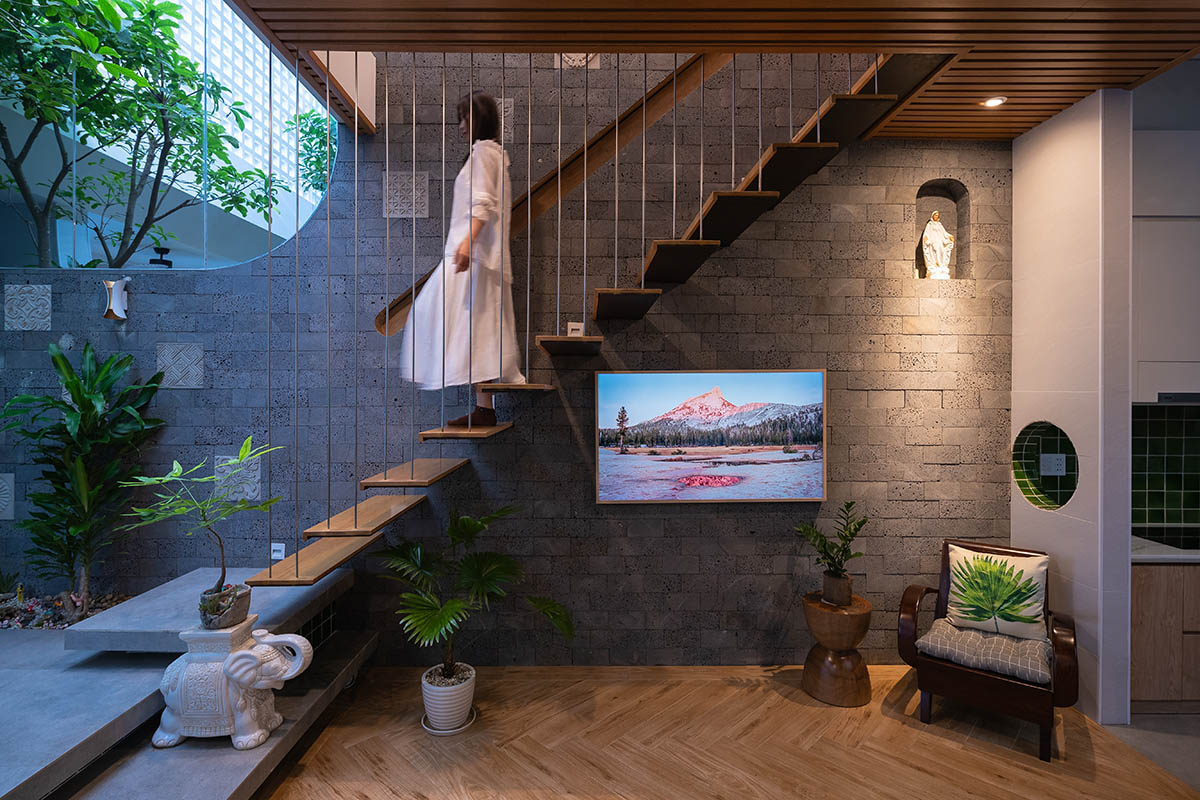 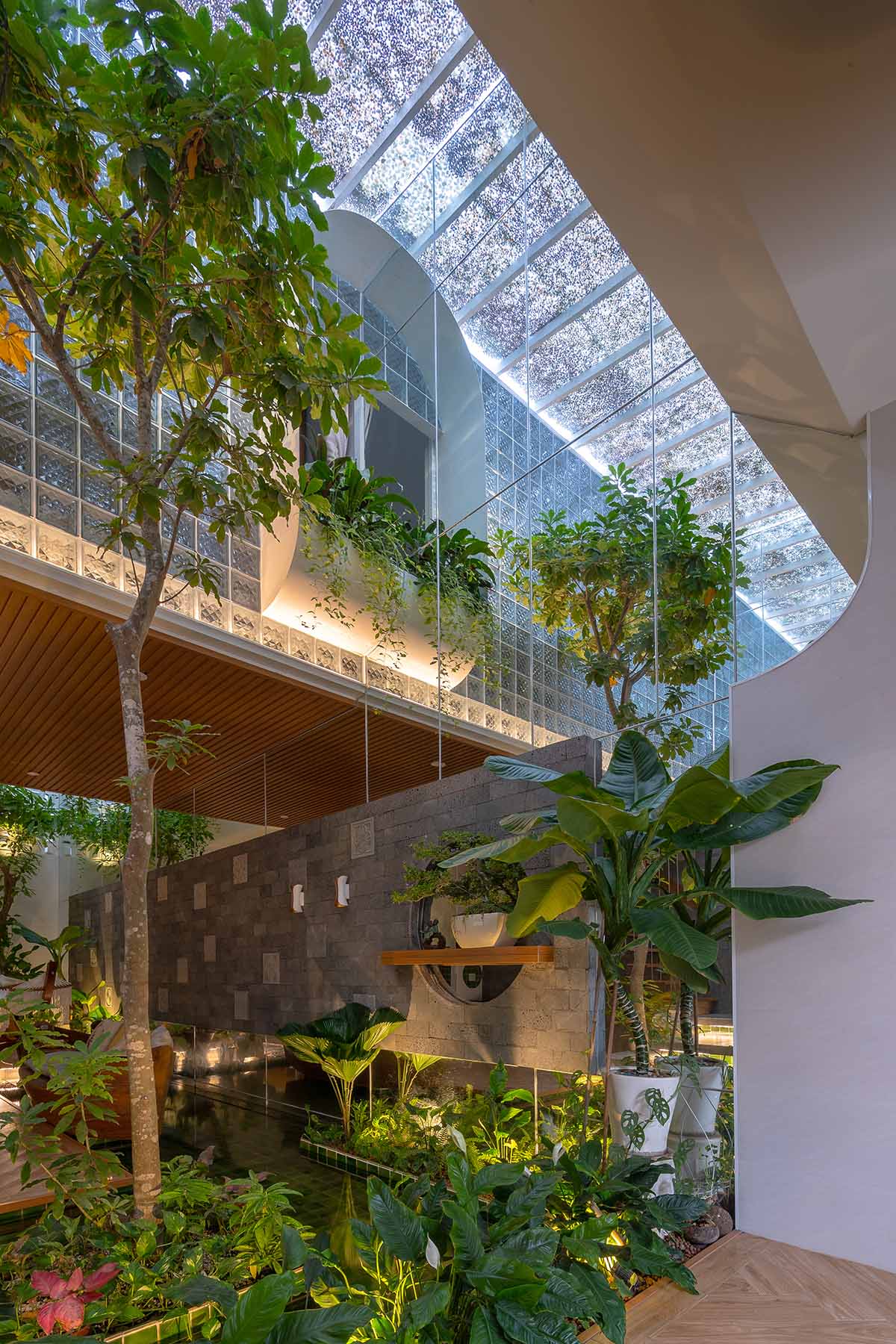 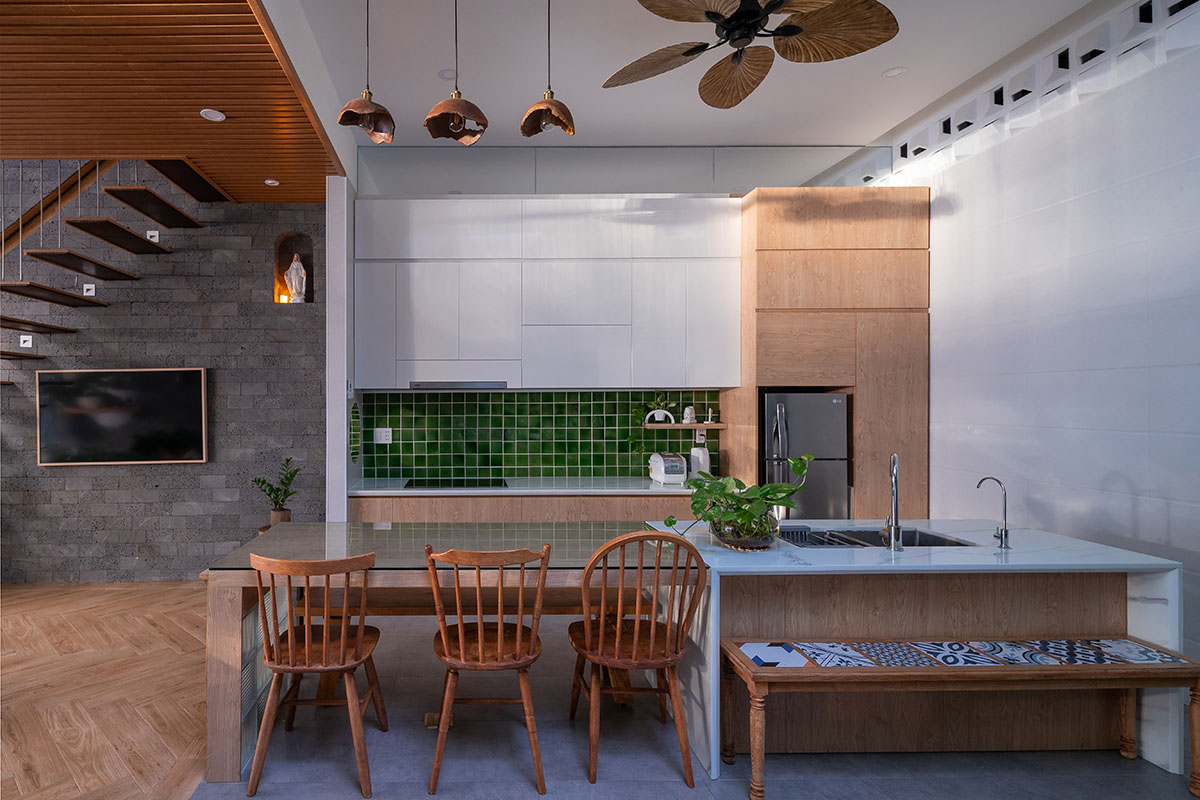 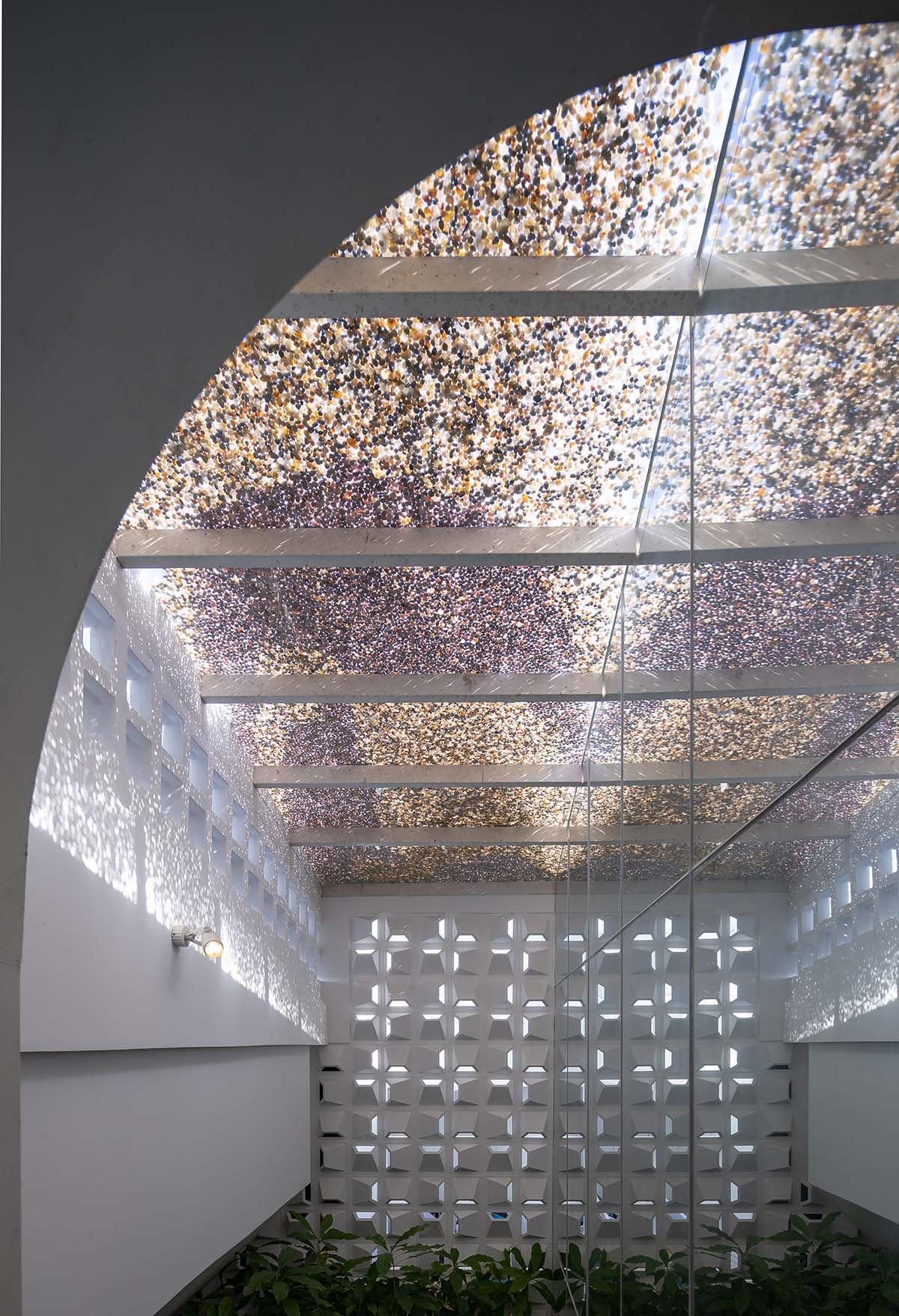 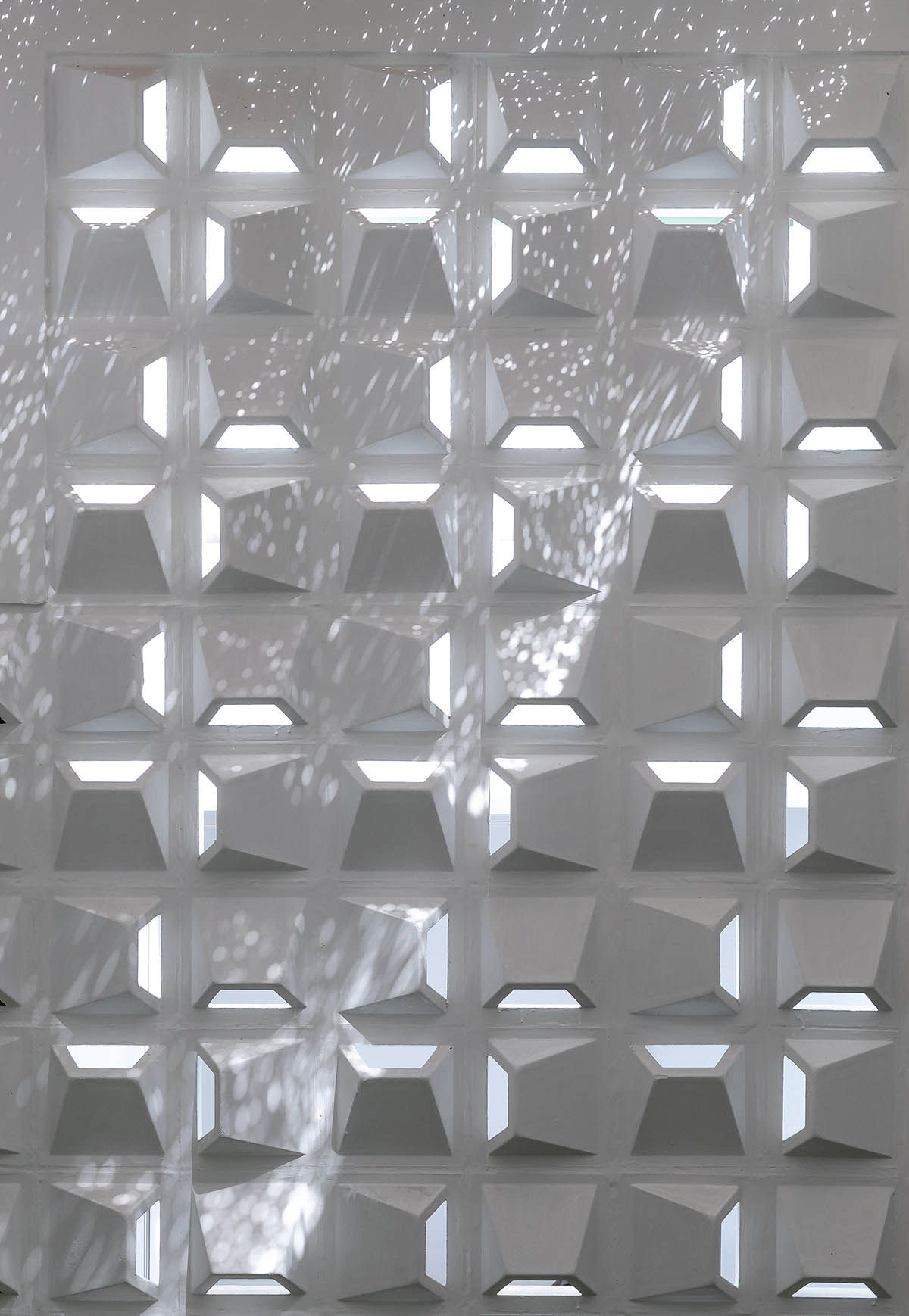 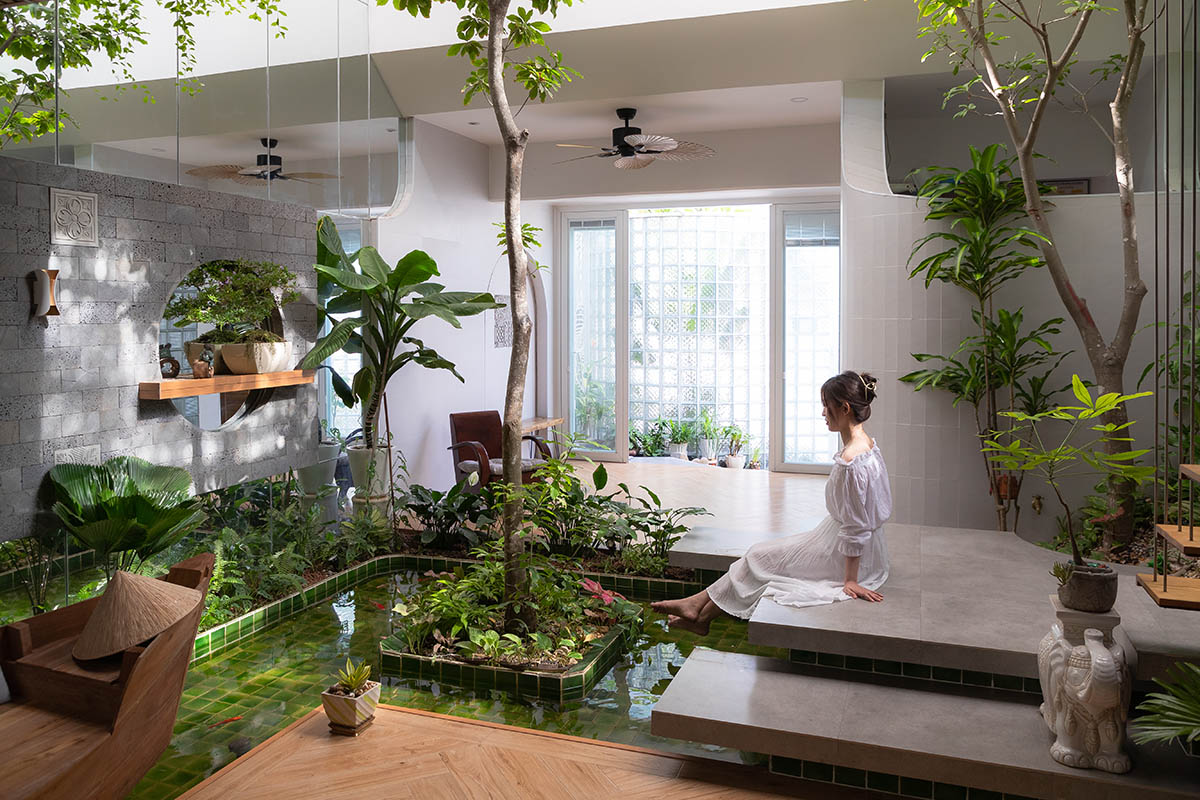 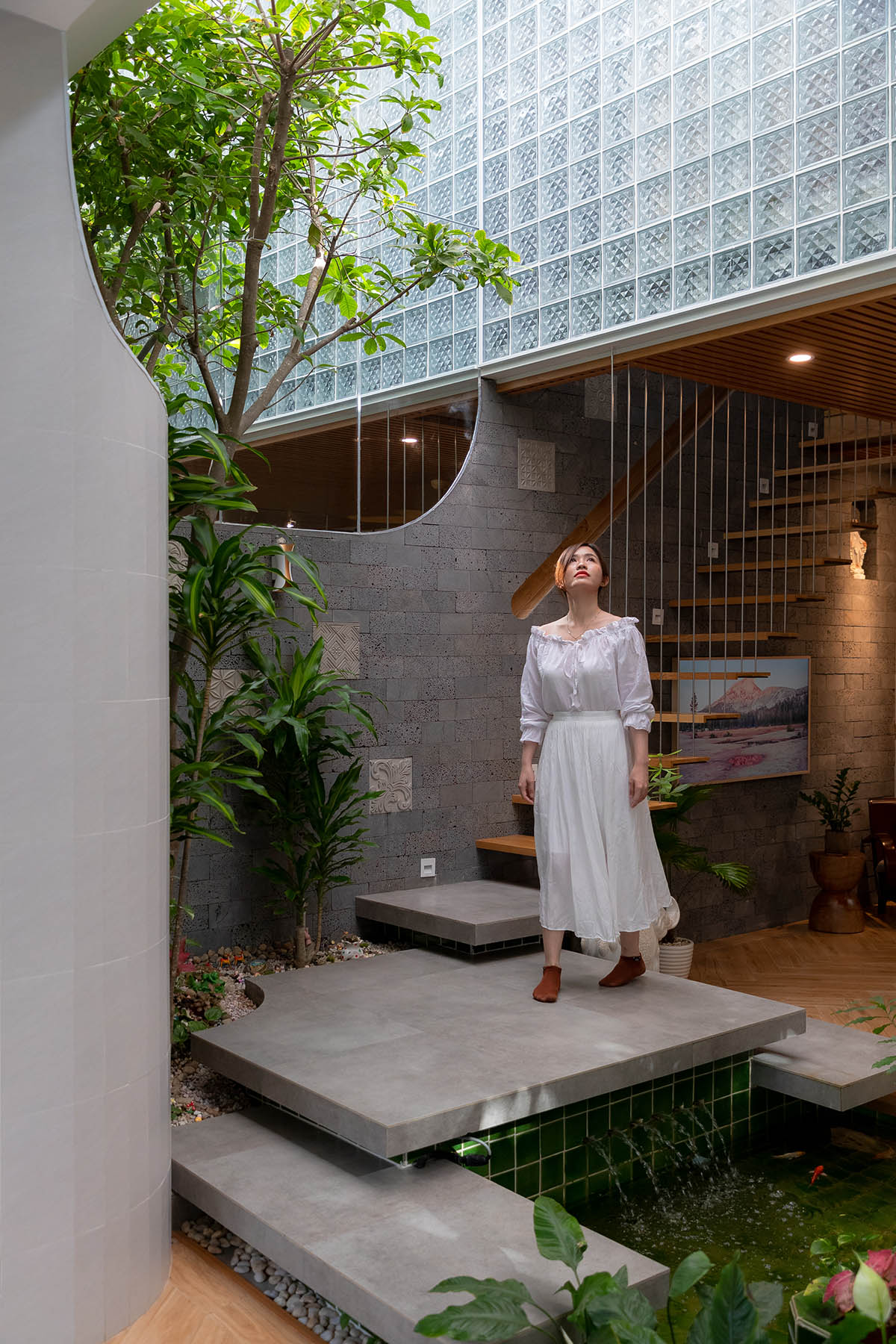 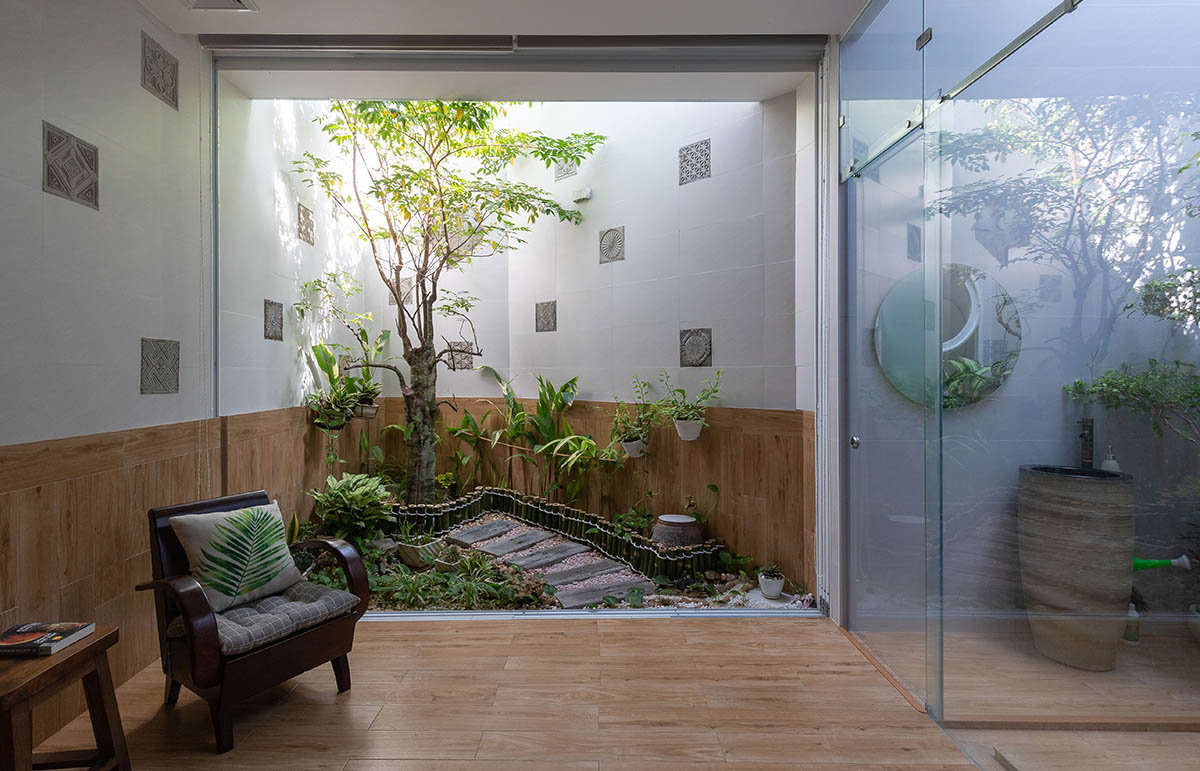 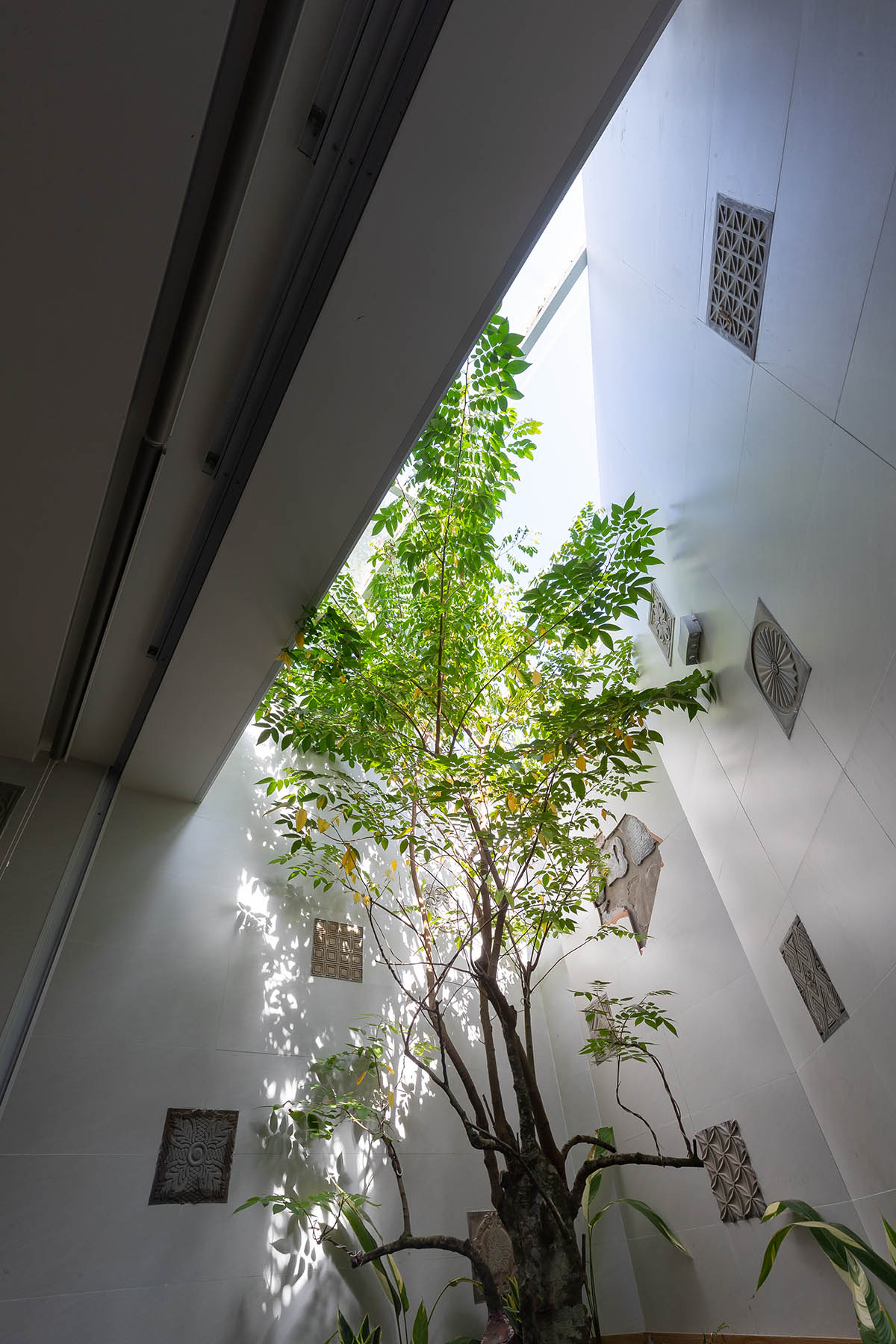 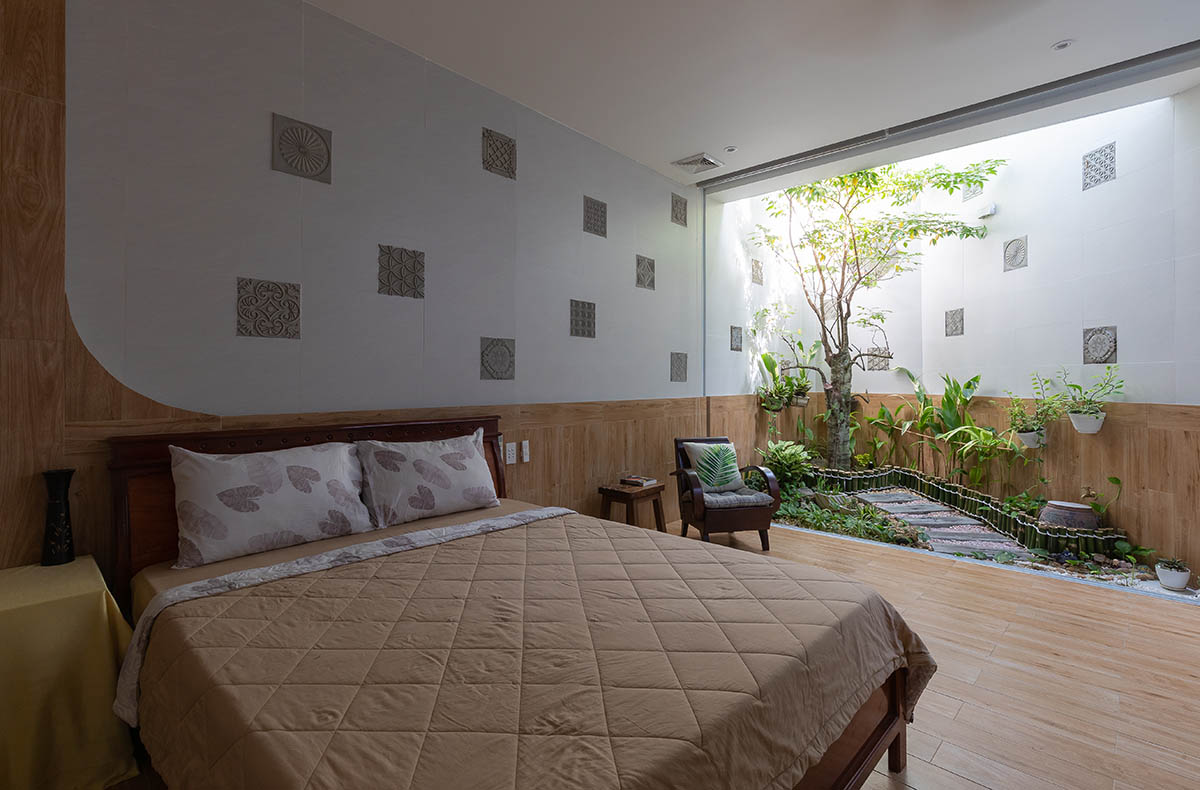 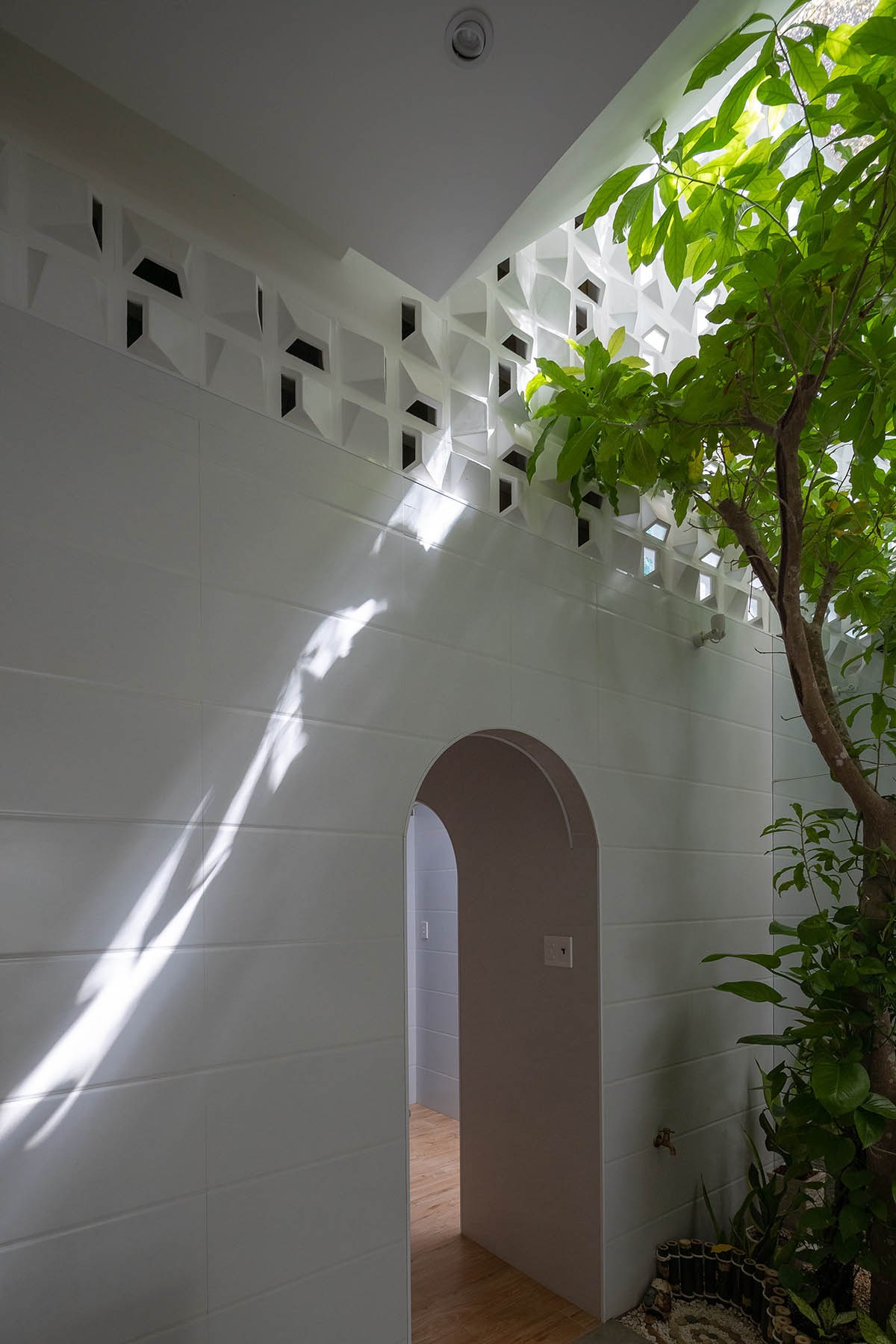 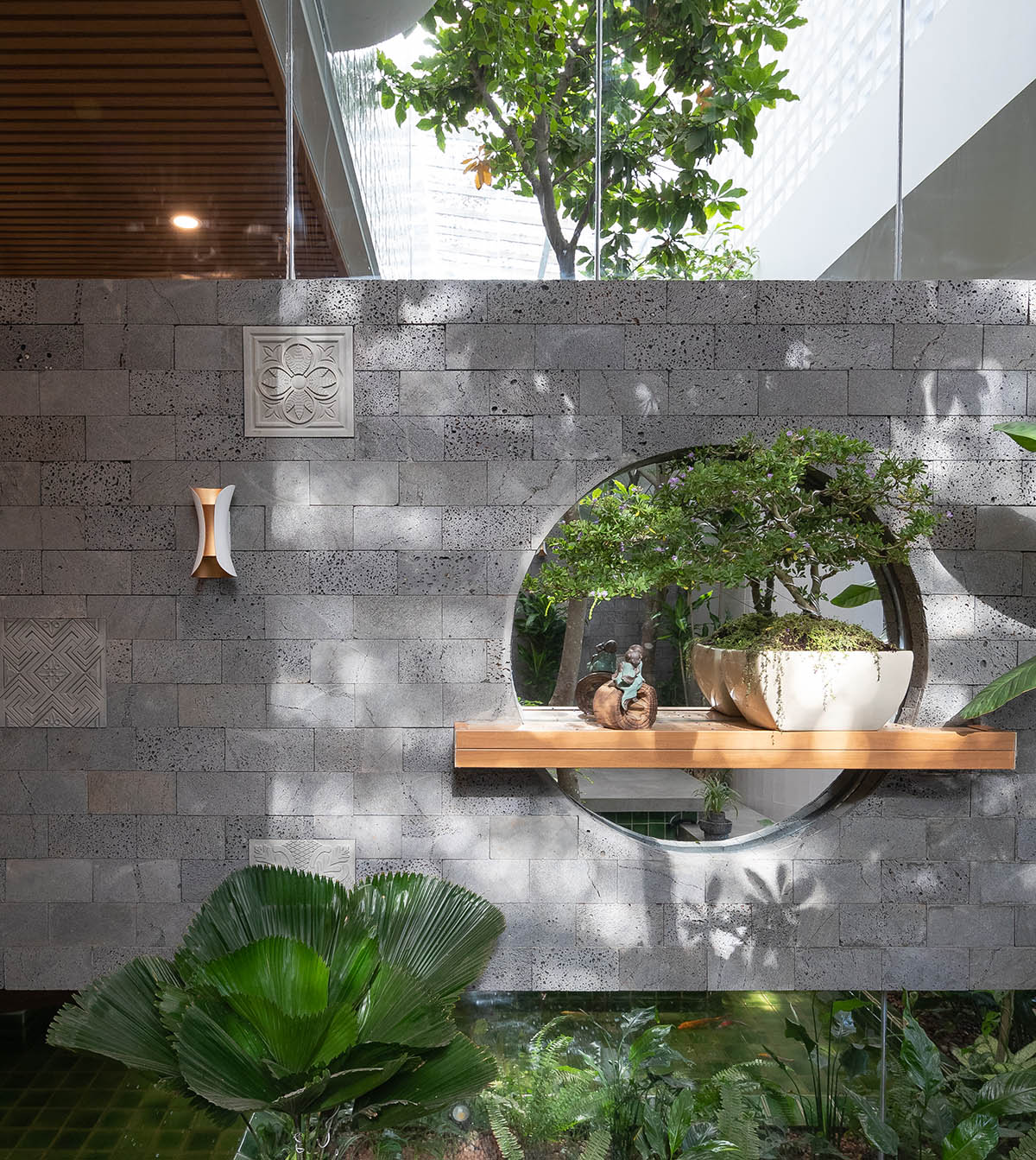 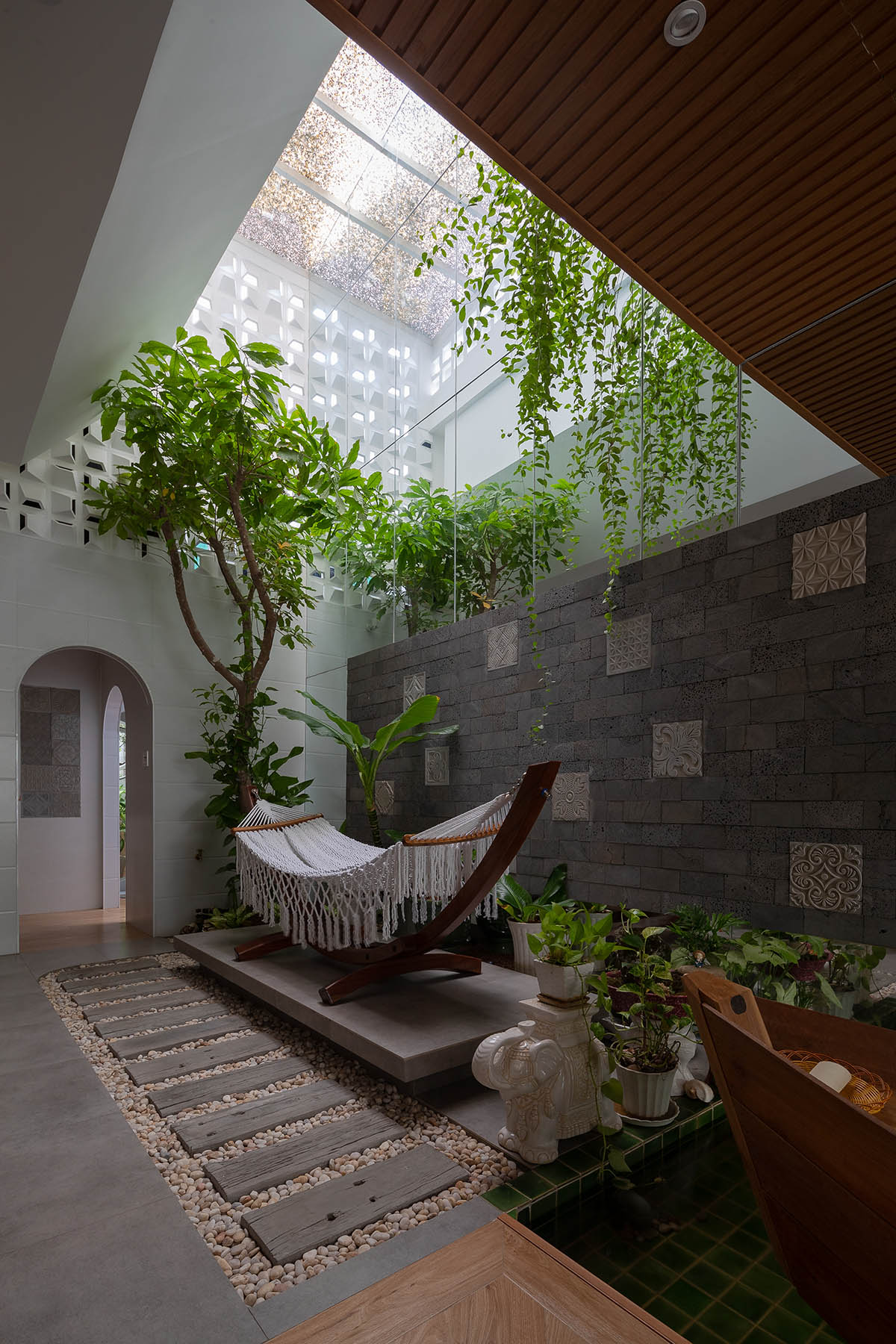 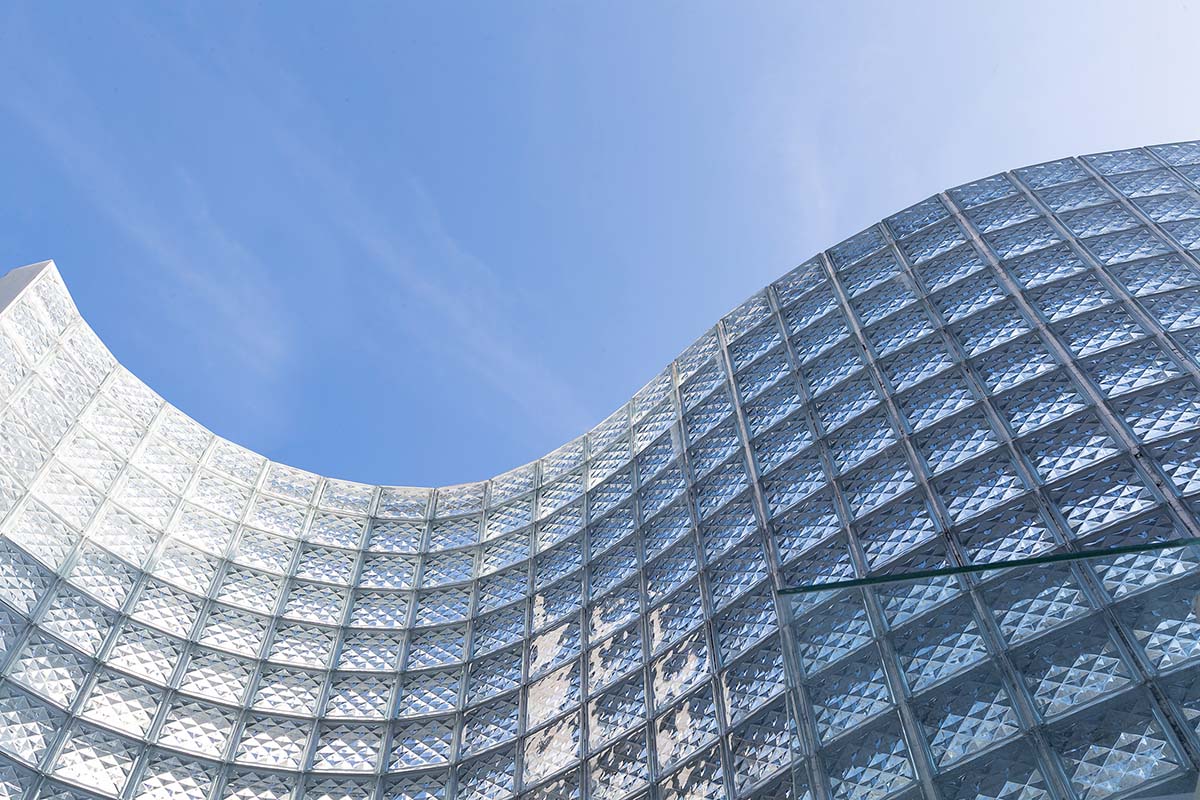