Named Espace Mayenne, the 15,100-square-metre building is a multifunctional facility consisting of a large sports and a 4,500-capacity entertainment venue, a gymnasium, a conference hall and a climbing wall inside for international competitions.

Located in a former military site bordering the French city of Laval, along the D900 urban ring road, the building is envisioned as a single volume that features deformed surfaces to reference "fluidity, unity, and movement".

In addition to these three main venues; sports and entertainment venues, gymnasium and conference hall, the building includes other spaces, such as partner lounges designed as modular rooms to receive guests during games or shows, as well as offices and cloakrooms for artists and sportsmen.

A 670-space parking lot is also arranged outside the building, as well as a landscaped area, with a 250-meter-long cycling ring for national competitions integrating a training track in its center.

Due to the building's introvert skin, the building does not give a clear message about the functions it contains. It stands out with a completely singular, clean and continuous façade.

Referencing to the contextual elements of the site, the studio began design process with an urban and landscape study aiming to define guidelines for the future development of this site in accordance with the framework of the Ferrié new neighborhood.

"This is an area undergoing change, crucial to the dynamic revitalization of the city," said Hérault Arnod Architectures, a Parisian architectural studio founded in the early 1990’s in Grenoble by Yves Arnod and Isabel Hérault.

"The building’s organization respects the landscape structure and the memory of the site, combining ecology, compactness, economy of means, and the creation of a mass plan saving parcels for future programs."

"The landscape heritage of the site is remarkable," according to the studio.

"It is composed of a natural area - marshes, woodlands, and wet meadow - and an old bocage grid with sculptural trees and sunken lanes, which are all entirely preserved."

Based on these parameters, the studio created an east-west pedestrian-bicycle path to structure the site, crossing the public parking lot and the wetland, before widening itself in front of the building into an entrance piazza.

To keep the intervention at minimum on the ground and create an an optimization on the geometry of the building, the building is conceived as a unitary volume that envelops the three venues in one movement.

The organic aspect of the building stems from its conceptual aspects. "It is less of a design gesture than the consequence of a process that articulates the three halls on a singular landscape," the studio added.

The façade is designed as a singular skin wrapping itself around the rooms, resulting in a shifting shape that constantly changes depending on the viewpoint.

To form this undulating geometry, the studio horizontally overlaps three stacked stripes that deform themselves in order to envelop the volumes as tightly as possible.

Looking from the top, it can be seen that these three ribbons overlap and rotate around the building, representing "fluidity, unity, and movement."

"Together, they create a flexible plane covering the entire height of the building and sometimes elevating itself in certain points in order to uncover glazed façades," added the firm.

The lobby is designed within the interstitial space between the three main venues. The design of the lobby allows a fluid circulation of the different public flows according to various scenarios of occupation - the three venues can be in use at the same time or not.

The lobby is characterized by its inverted conch-shaped volume and its acoustic ceiling made of wooden boards. The building has two ground floors and is organized so that the different types of flows - public, sportsmen, technicians, artists, staff, and partners - are clearly separated.

The sports and entertainment grand hall

To respond multiple uses, the studio designed the functional organizations in a high-level of flexibility.

The design of the grand hall is quite flexible and can be used for different purposes, such as shows, concerts as well as for sports games.

"While sports events require an arena system where the spectators are sitting all around the field, concerts and shows require a frontal system with a stage," said the studio.

"The room is asymmetrical with a large balcony on one side, which allows the installation of a stage on the long north side, therefore reducing the distance between the performers and the public."

Adding diagonal curtains inside, the curtains can be drawn to transform the arena configuration into a trapezium that flares out starting from the stage frame. In the sports events’ configuration, the field is closely surrounded by an arena of bleachers.

"The technical treatment of this hall has been thought out so that it can be quickly converted from one configuration to another: the space is completely transformed according to the program," the studio continued.

"The design of the walls, alternating between raw white concrete and wool felt, was elaborated in collaboration with acousticians."

The studio also designed these areas in terms of being highly effective for sound absorption, reverberation, or a mix of both.

To achieve this, the firm used corrugated raw concrete to distribute the sound equally in the space, strips of concrete alternating with strips of wool felt for the mixed areas, wool felt stretched with an acoustic mat for the absorbing zones, behind the bleachers.

Suspended panels of wool felt were designed for the ceiling, creating an aerial geometric pattern. A vast technical grid is hidden behind them, allowing a great flexibility of equipment and scenic arrangements. 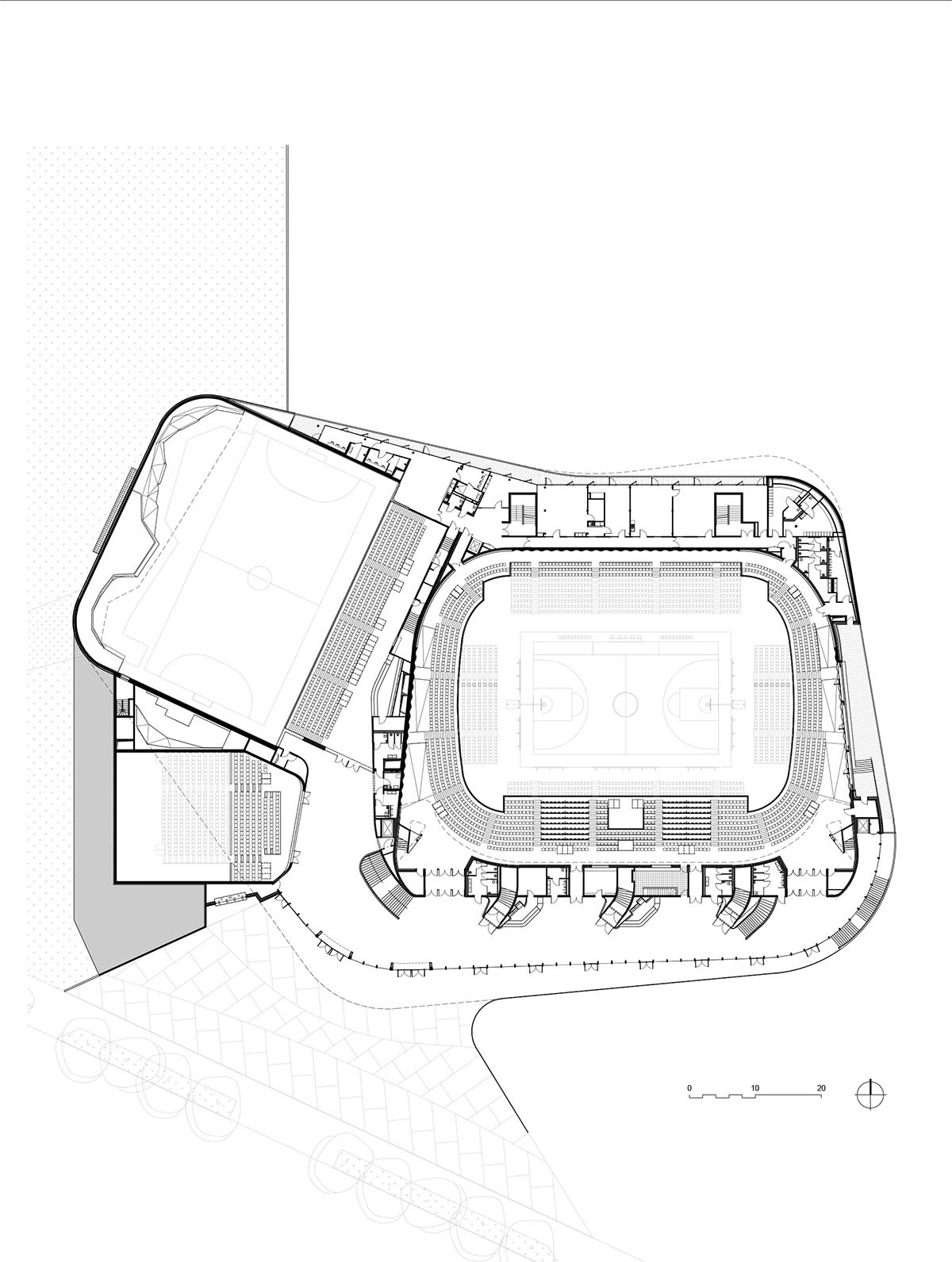 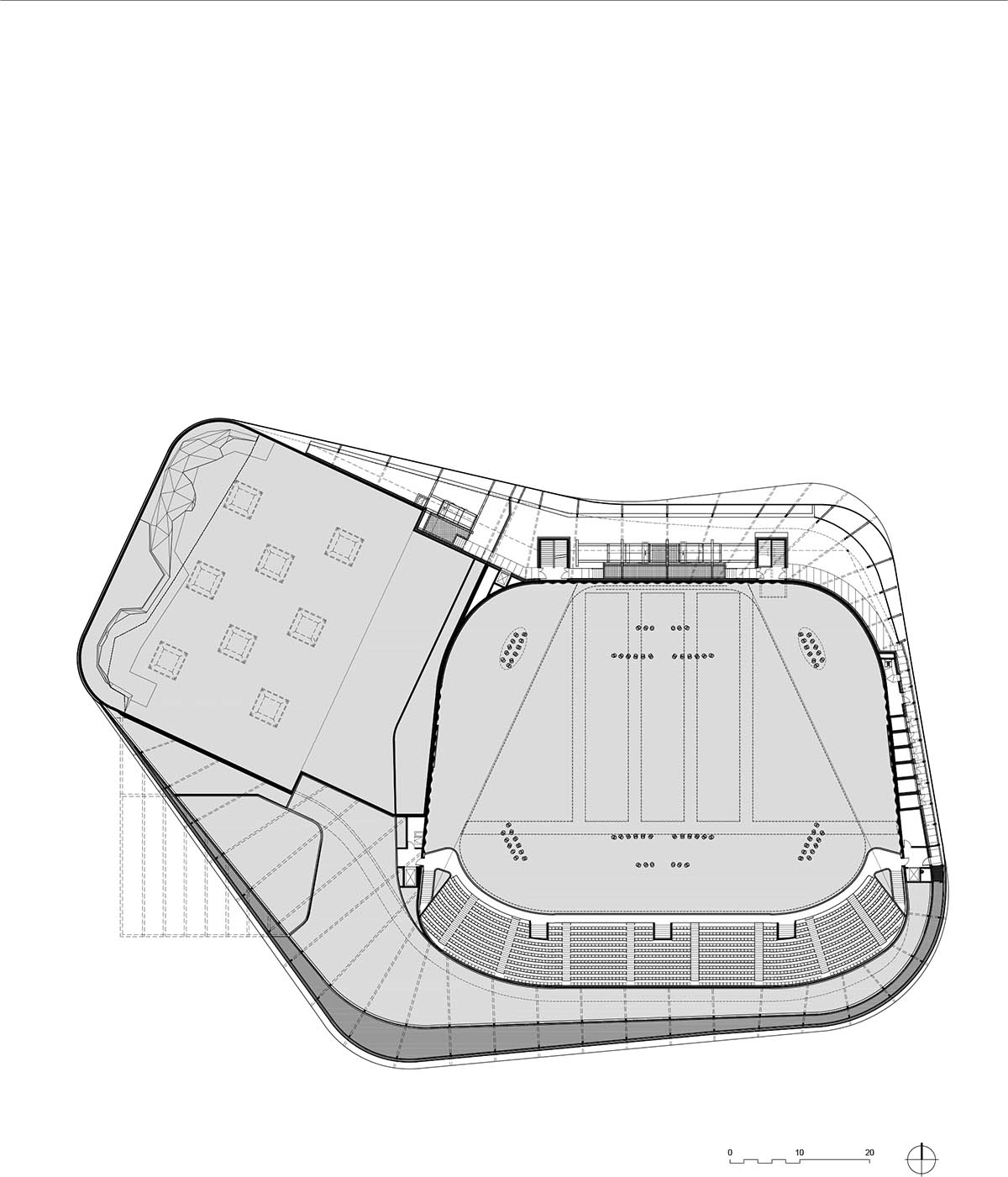 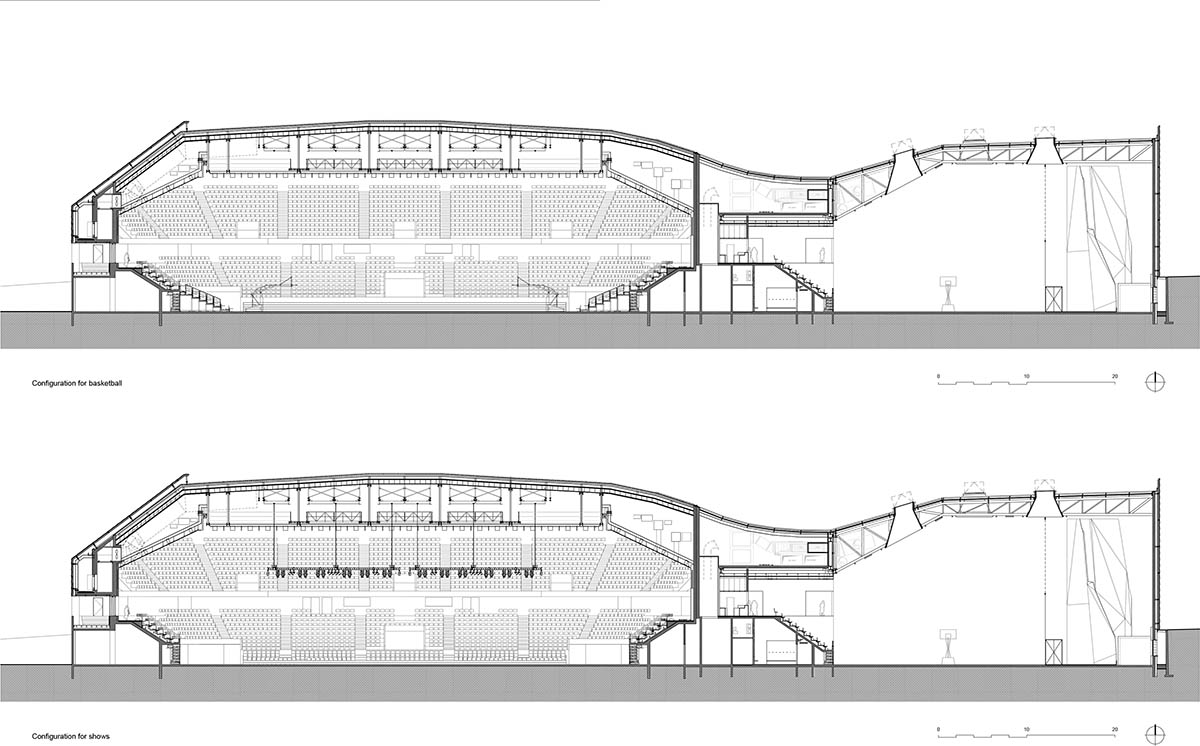 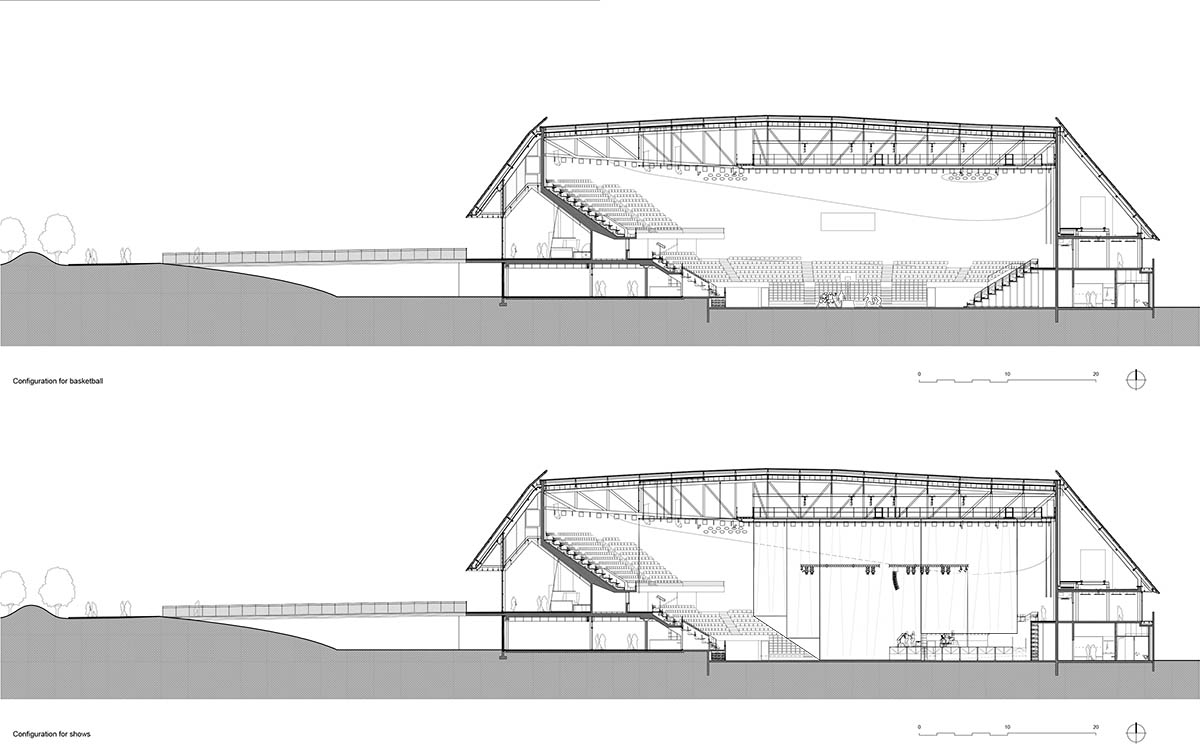 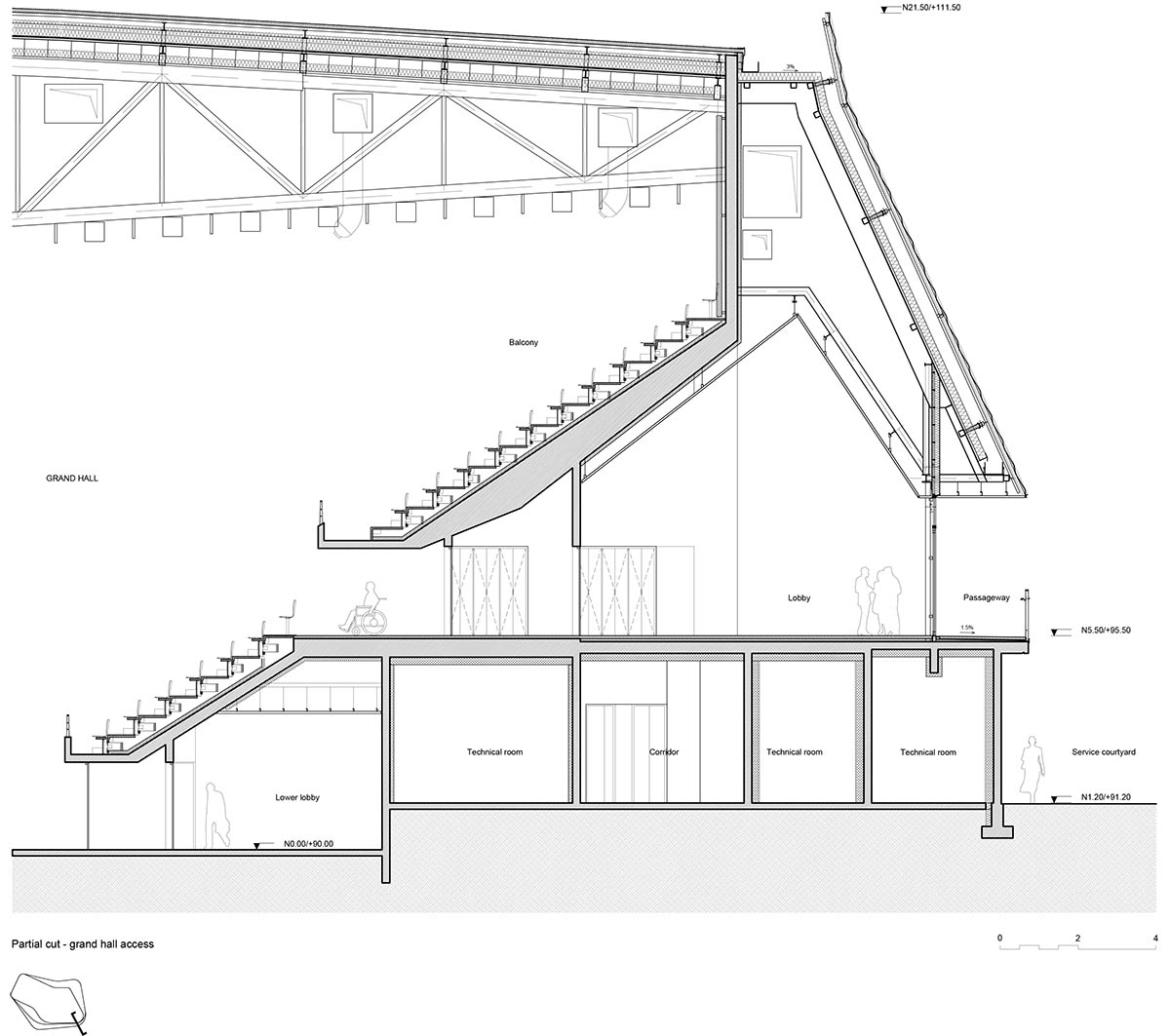 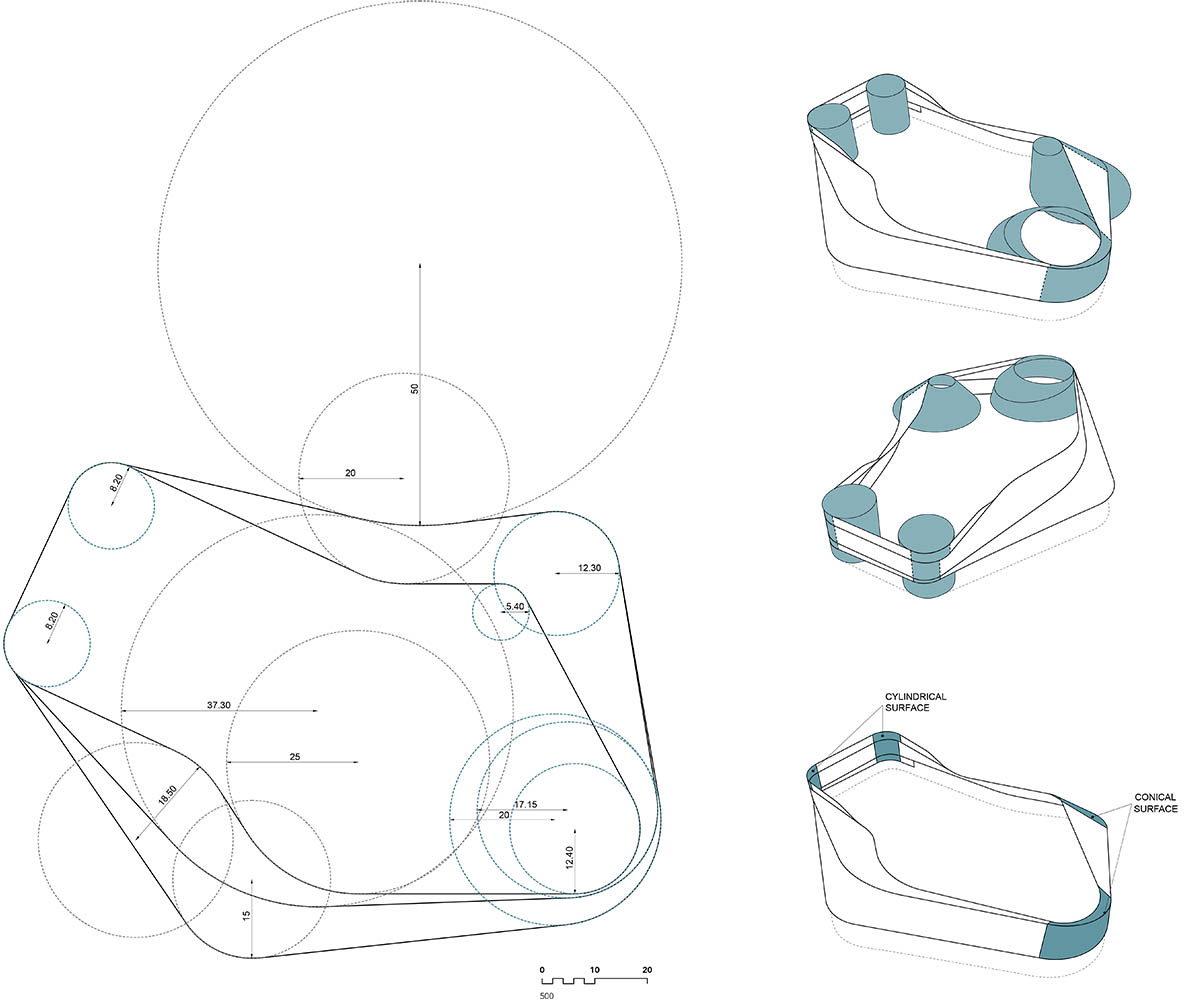