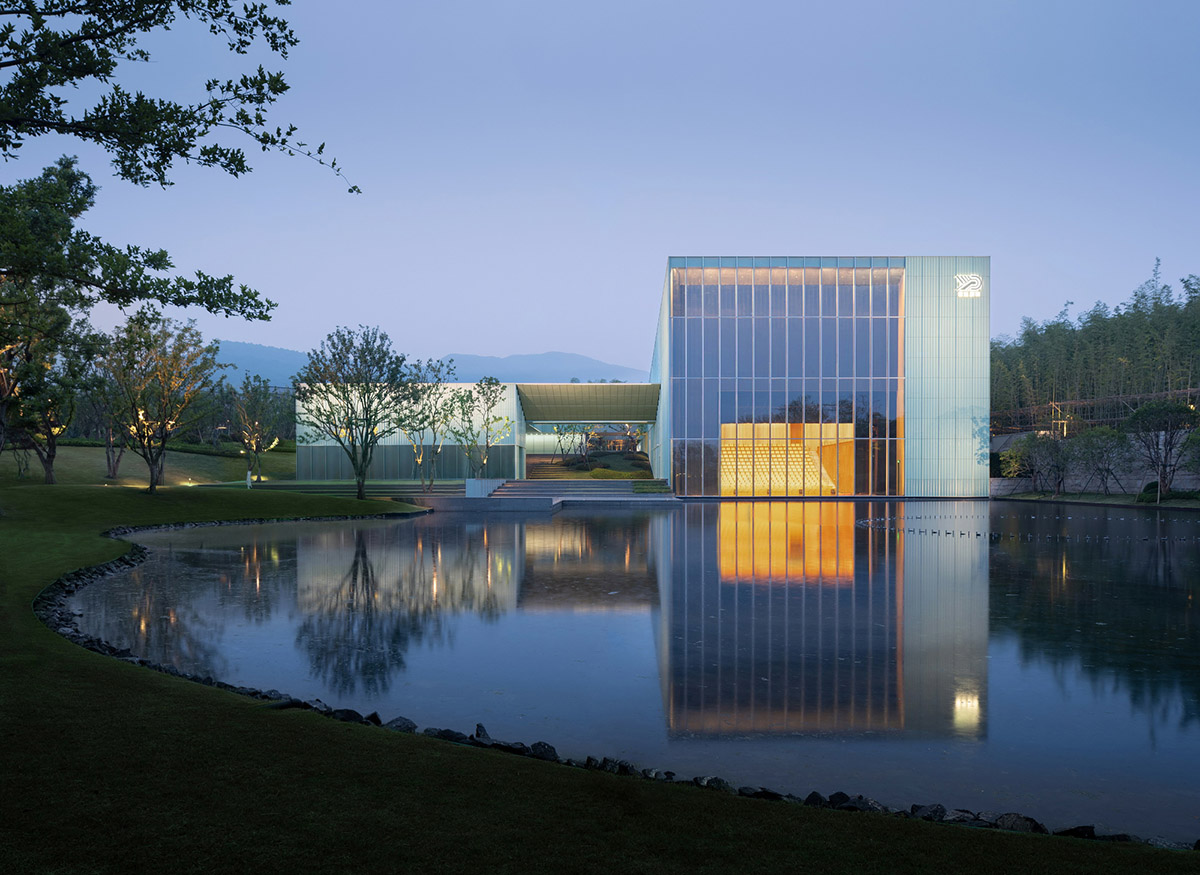 Chinese architecture practice GOA has completed a theater complex in Yangxian Xishan of Yixing, a county-level city of Jiangsu Province in China's southeastern region rich in cultural and natural resources.

Named Yada Theater, the 6,000-square-metre building is envisioned as "a porous sponge that absorbs and embraces visitors and the surrounding environment." 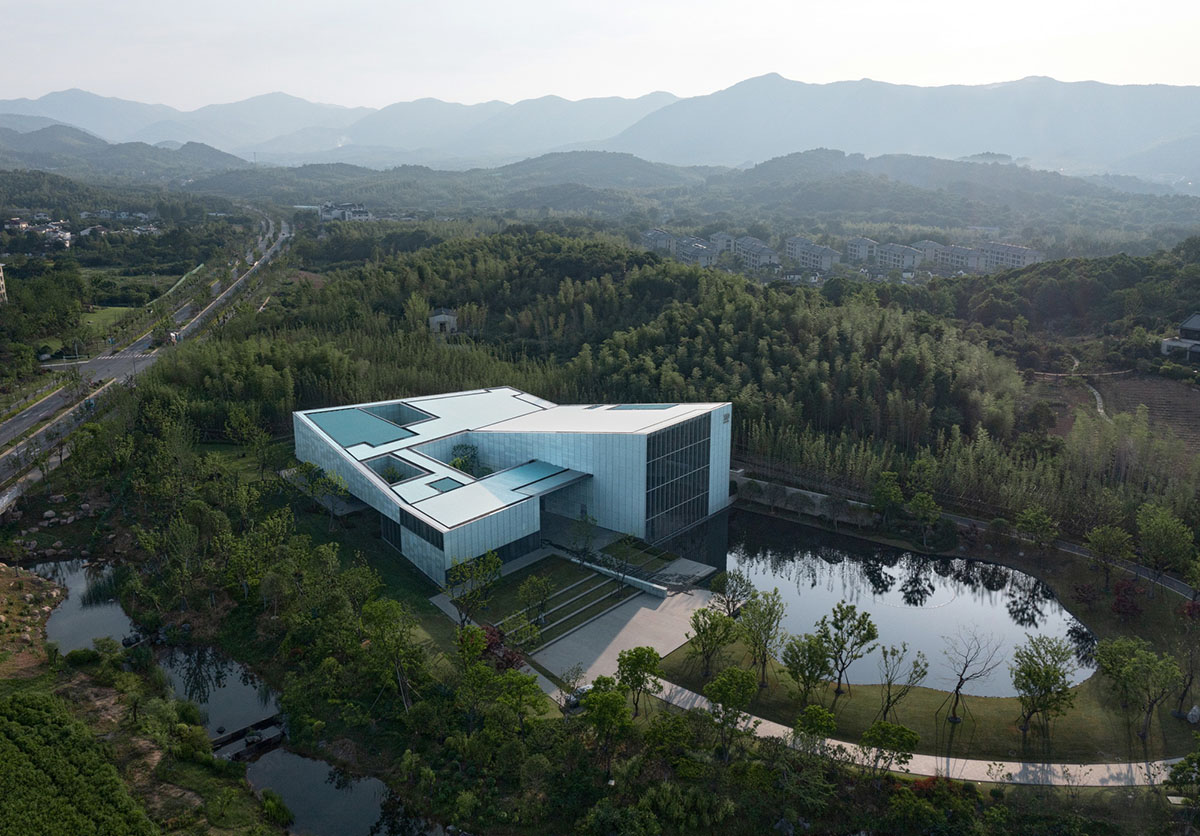 Read the full design narrative with the architects' own words. Since the Song dynasty, Yixing has been the capital of Chinese pottery production, known for its clayware. In addition, it contains China's largest bamboo forest, a significant tourist attraction. In the contemporary context of urbanization, Yangxian Xishan is a successful rural revitalization practice of Yixing. It is the first small town development to achieve territorial openness and self-operation, and Yada Theater is the cultural landmark of the town. 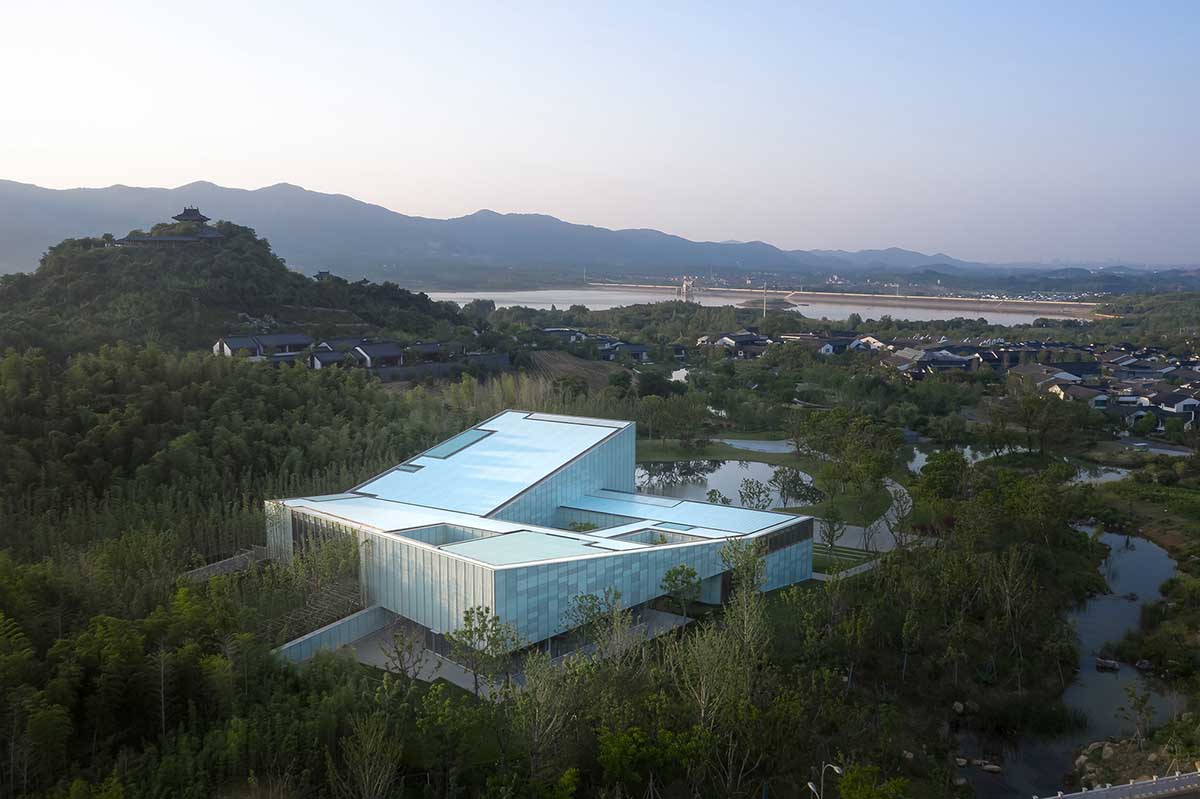 Adjacent to Yangxian Lake, the site is in a hilly terrain covered by 400 hectares of primitive bamboo forests. Mountains, bamboo groves, and lakes comprise the local landscape system. Within this unique geographical condition, Yada Theater incorporates the existing ecological aesthetics into its design. It develops a new approach to a cultural venue by integrating architectural morphology with nature in a manner that embraces modernity while conserving regional identity. 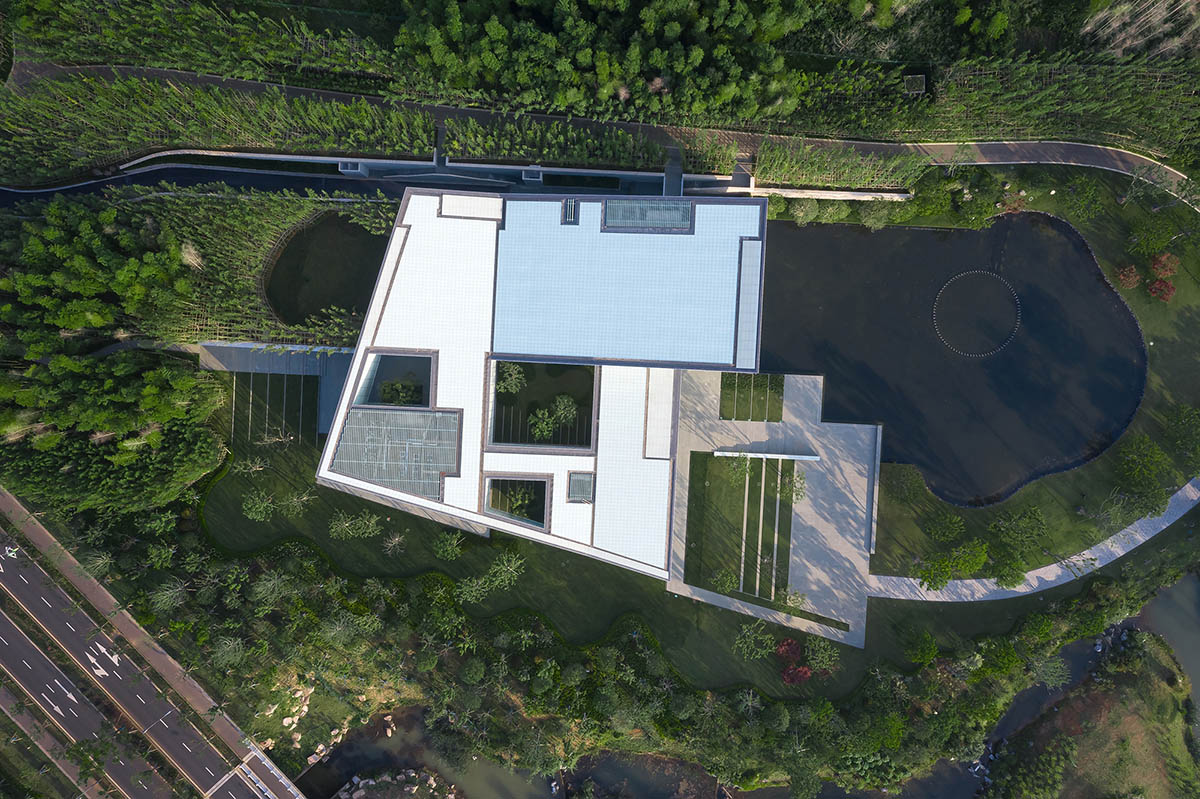 Besides taking the cultural functionality requirement as a principle for spatial organization, the design fuses physical experience and geomorphological features to create an integral spatial manner. From the central courtyard, a series of grey spaces expand in different directions and intersperse each corner. Their inner and outer interfaces are extended into courtyards and connected by covered corridors, providing a free circulation system that follows the slope of hills to maximally preserve the existing geomorphology.

The decentralized architectural scale balances the perception of topography and body to establish an intimate bond between humans and the environment. This subtle synergy of the landform and constructional morphology generates a strong visual tension between the architecture and context that the entire structure appears to float lightly above the ground. 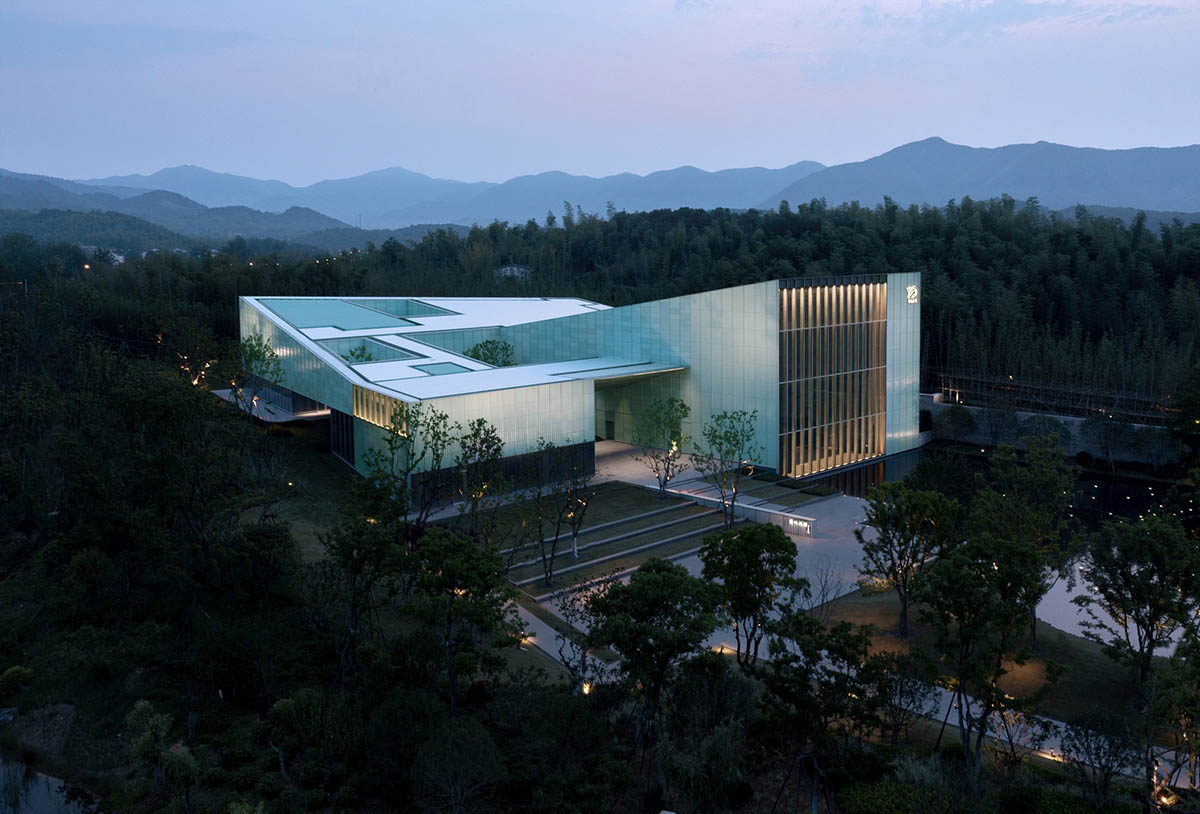 Theater in the nature. Image © AOGVISION

Implementing a traditional Jiangnan Garden layout is an anti-gentrification design strategy that discards the over-enclosing space and exclusive function of conventional theaters to provide community services for the surrounding residents, such as public gatherings, cultural events, and leisure activities.

This layout echoes the Oriental perspective on nature which seeks to incorporate artificial structures into the landscape on a human scale while retaining architectural legibility. It presents the ground space in a communal, open, and accessible manner that encourages people to be involved in the space by roaming between the architecture and nature. 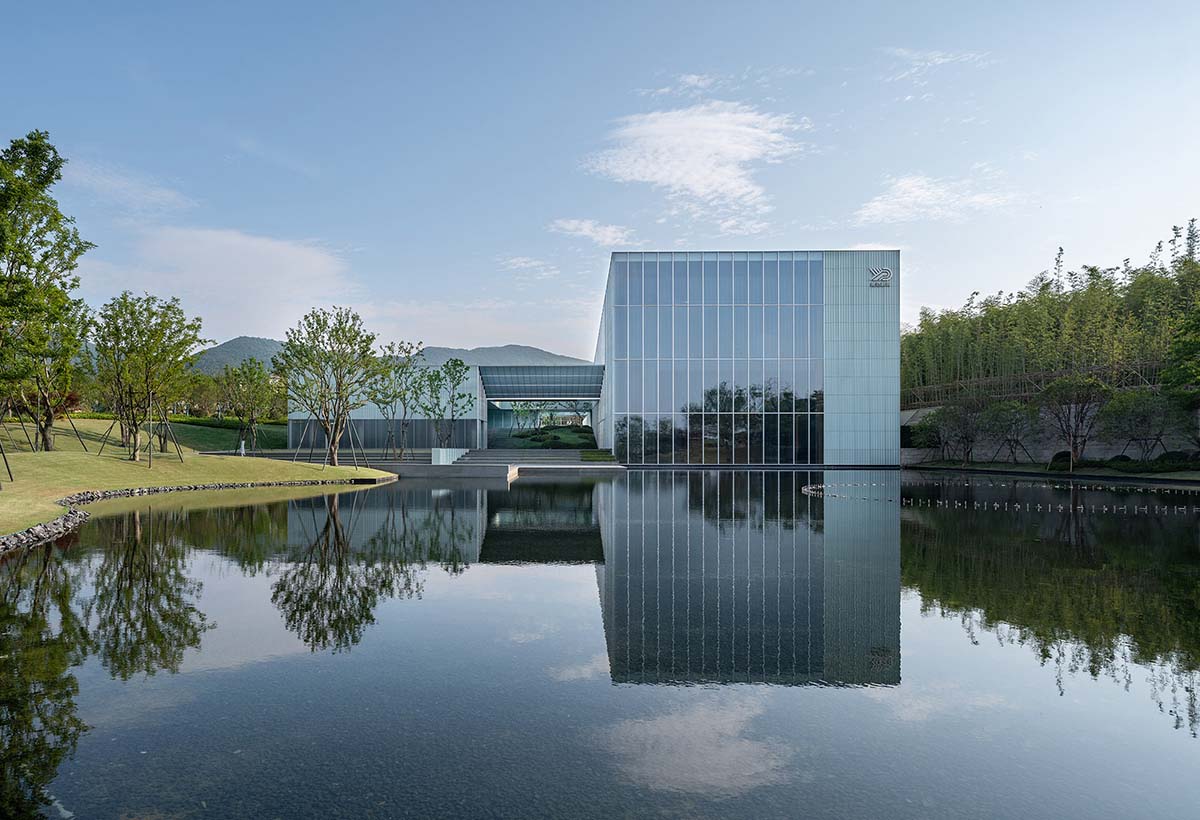 Thus, the architecture is envisioned as a porous sponge that absorbs and embraces visitors and the surrounding environment. Performances will take place on the stage, while the remaining will become places to cultivate a variety of spontaneous activities and promote lively daily scenarios. 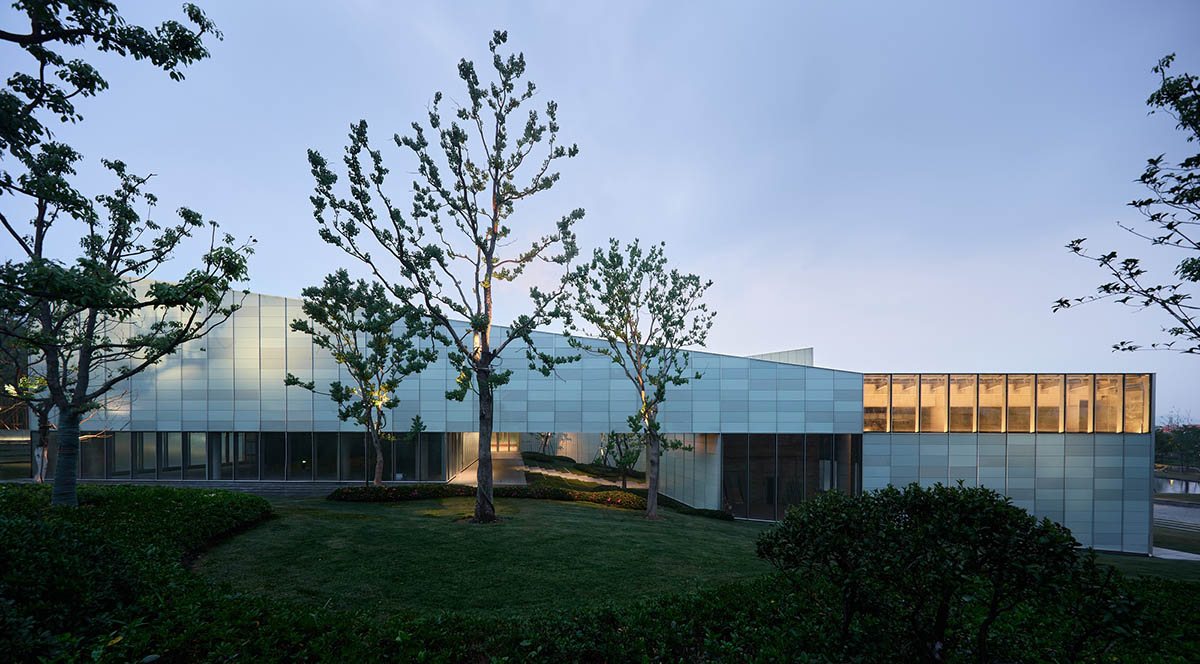 This design approach extends beyond the architectural scope, aiming to benefit local residents, coming visitors, and surrounding communities at large and the broader environment. In addition to serving as a venue for performing arts in the town, Yada Theater becomes a gravitational field for cultural life that brings fresh vigor and new opportunities to the area. 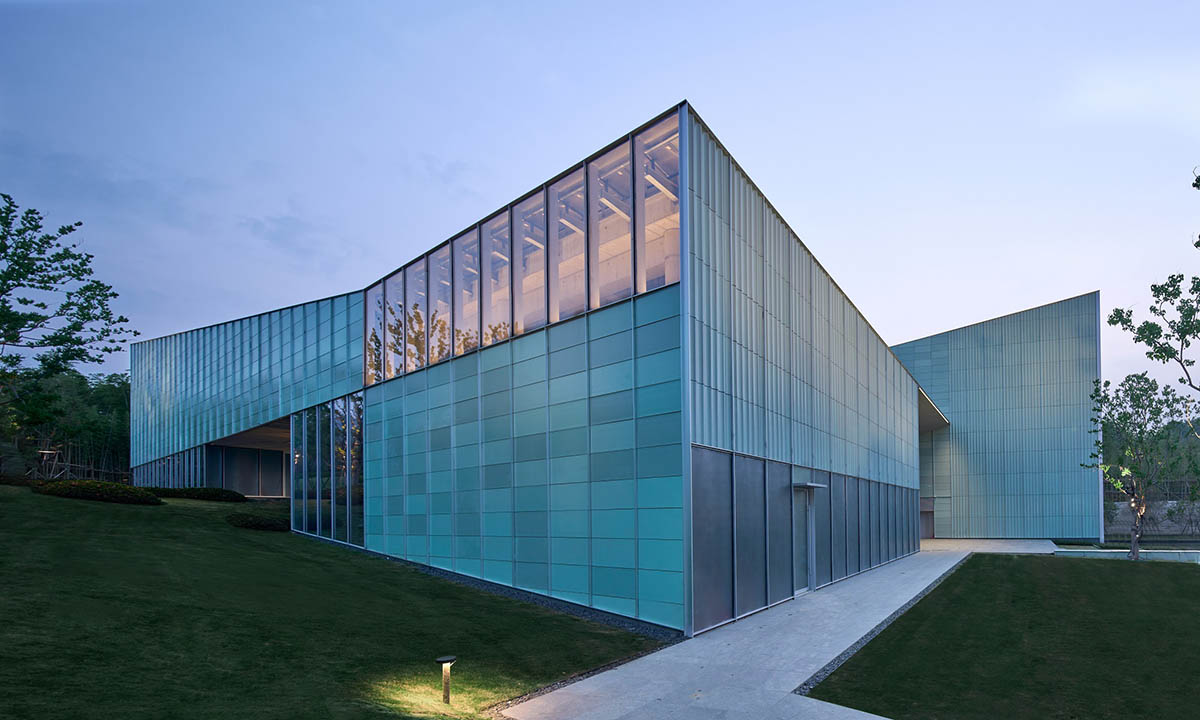 The multifunctional auditorium adapts to the landform to maximize the preservation of nature on site and the diversity of spatial qualities. It extends to the stage along the hill's slope. It features a large glass window behind its stage that opens to nature and acts as a botanical backdrop to generate spatial permeability between the exterior landscape and the interior. 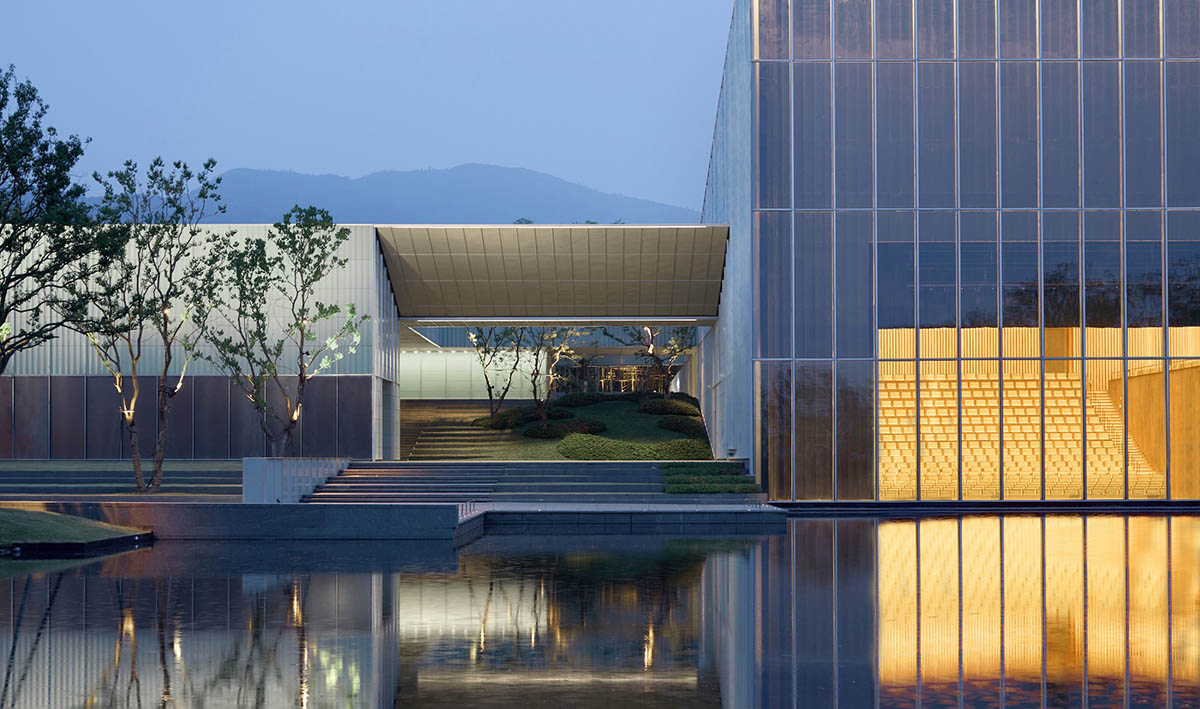 The transparent courtyard and the theater. Image © AOGVISION

As nature becomes a part of the performance, the auditorium delivers audiences a novel and delightful theater experience within an attractive green context.

The 530-seat auditorium can be used flexibly for any recreational activity by shifting between open and picture-frame stages to satisfy the varying setting needs of concerts, dramas, and large community events. 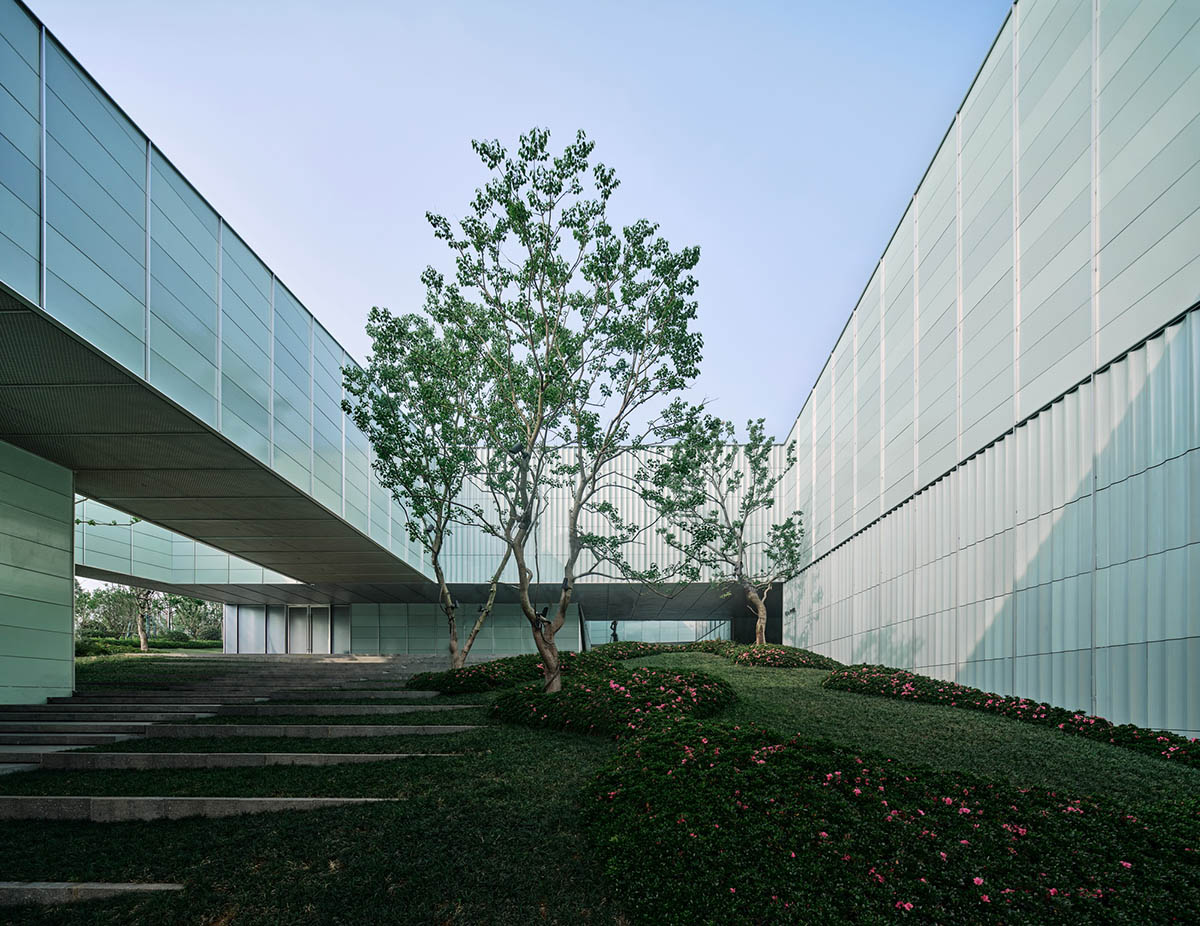 Under such an architectural scale, the design adopts a collage technique to eliminate the sense of volume, endowing architectural readability from a distance to a close-up. The facade incorporates material selection with the preservation of cultural heritage. It uses locally fired grayish green ceramic panels to present bamboo joints as facade units to form the first layer and then adopt a collage expression to form the second layer.

The dual-layered façade system enables each architectural detail to be progressively perceived from a distance to close-up, transforming a modern architectural vocabulary into an emerging landmark while reorganizing local reminiscence. 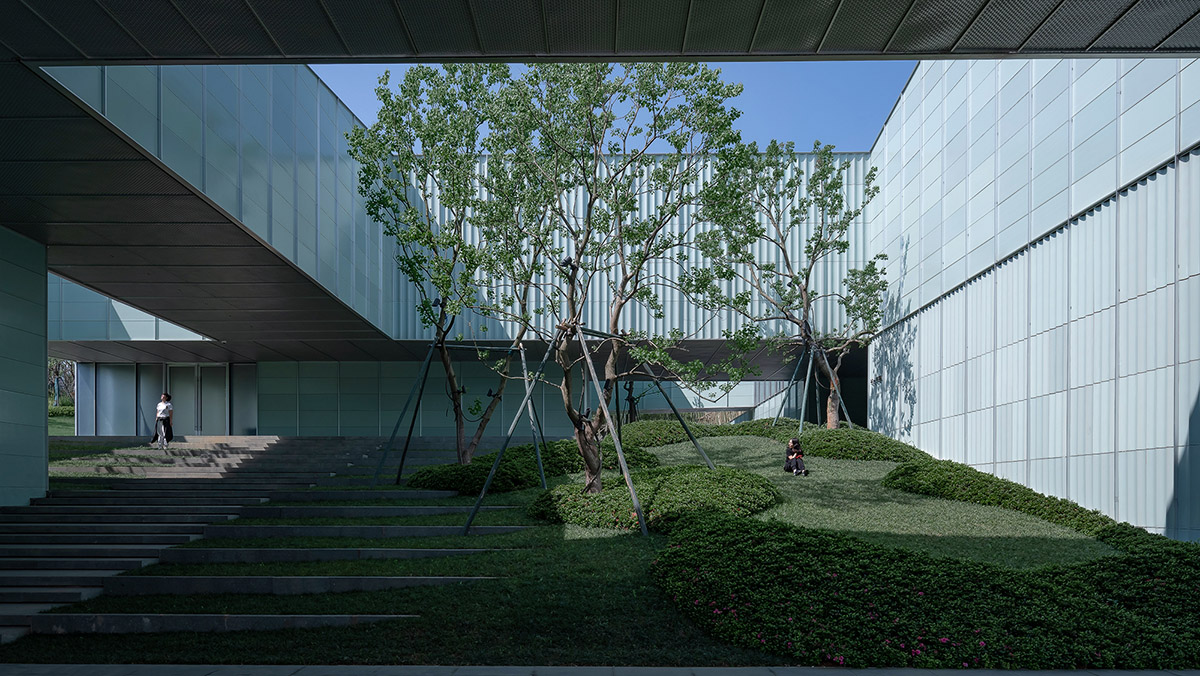 People in the courtyard. Image © GOA 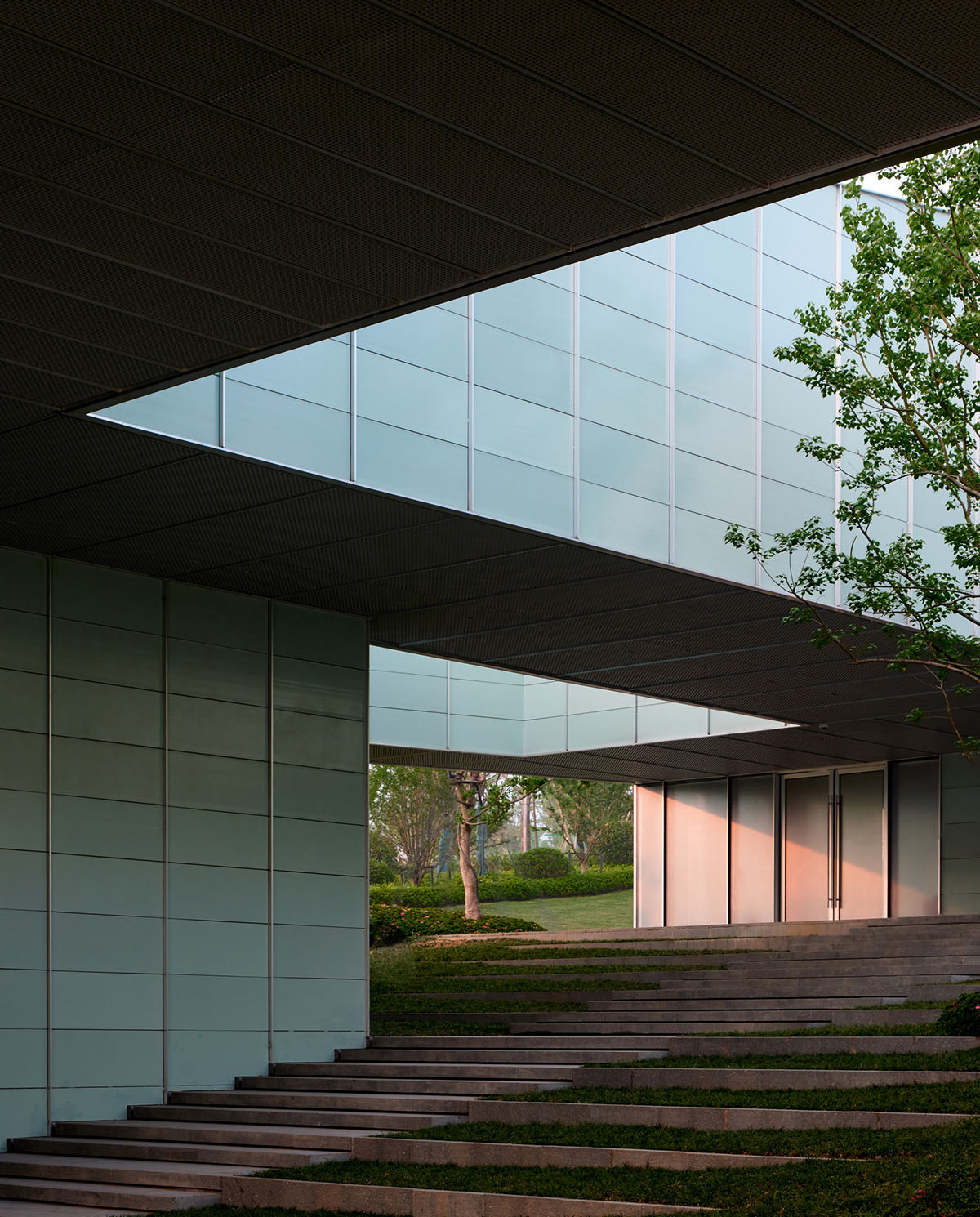 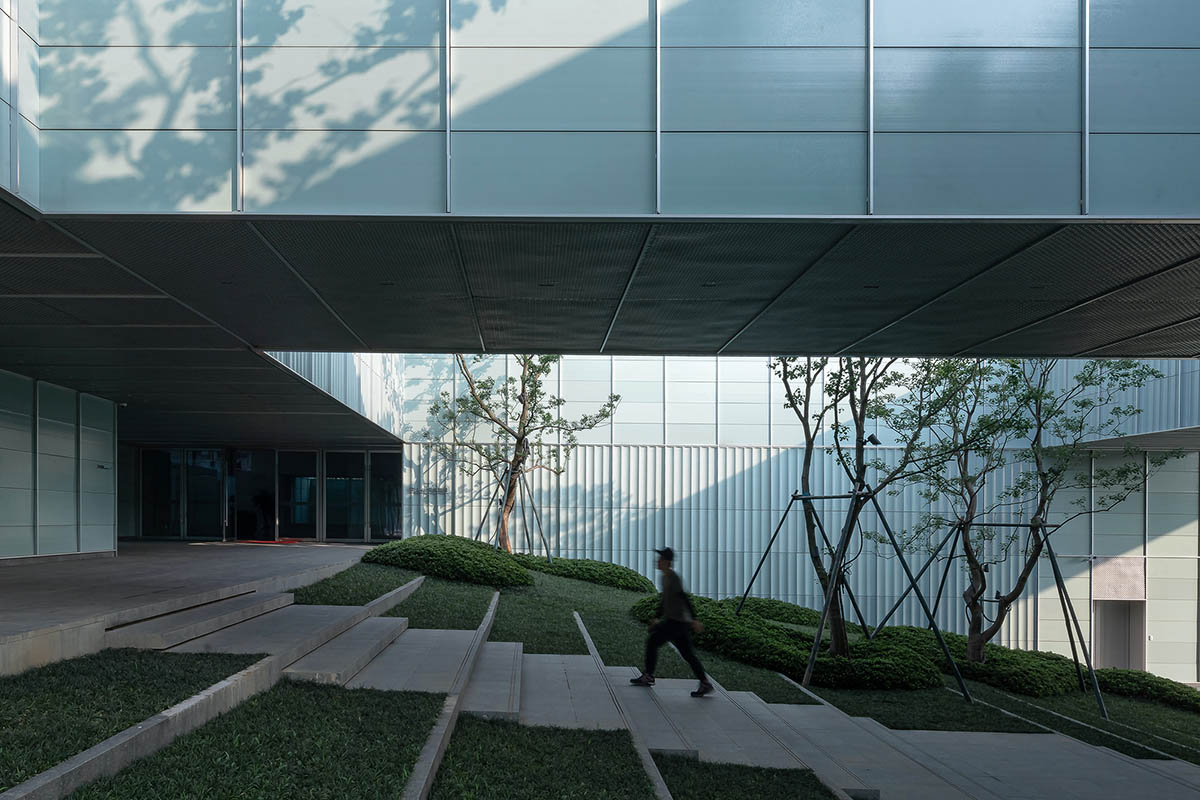 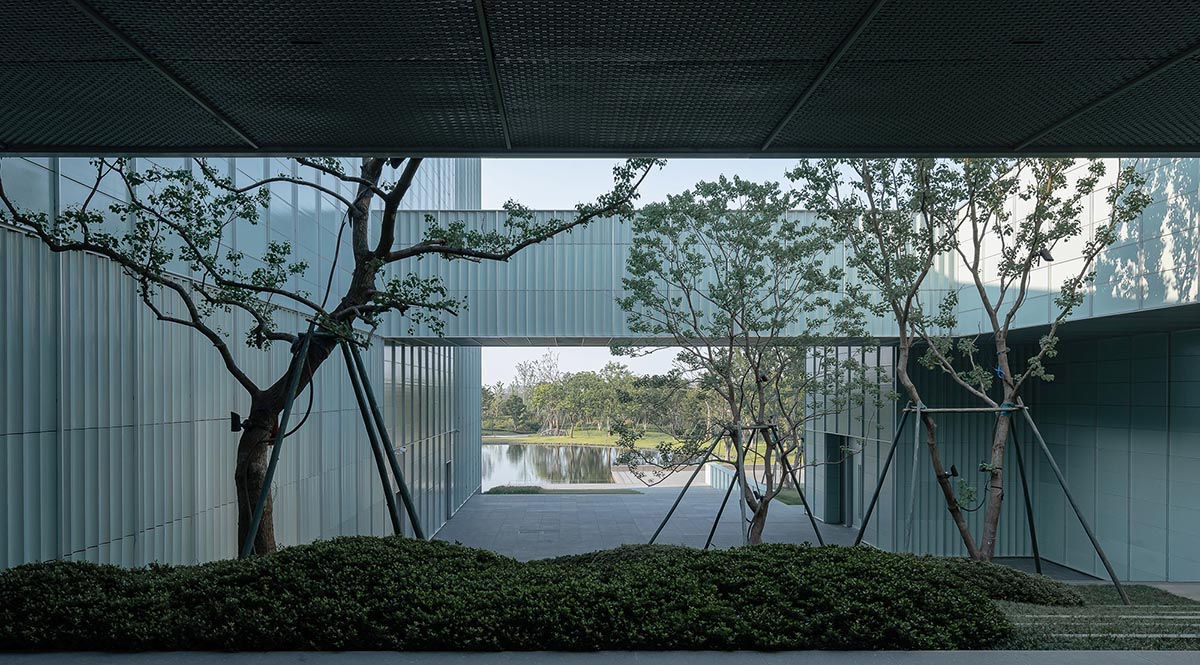 View from the courtyard. Image © GOA

Lobby with entrance from the courtyard. Image © AOGVISION 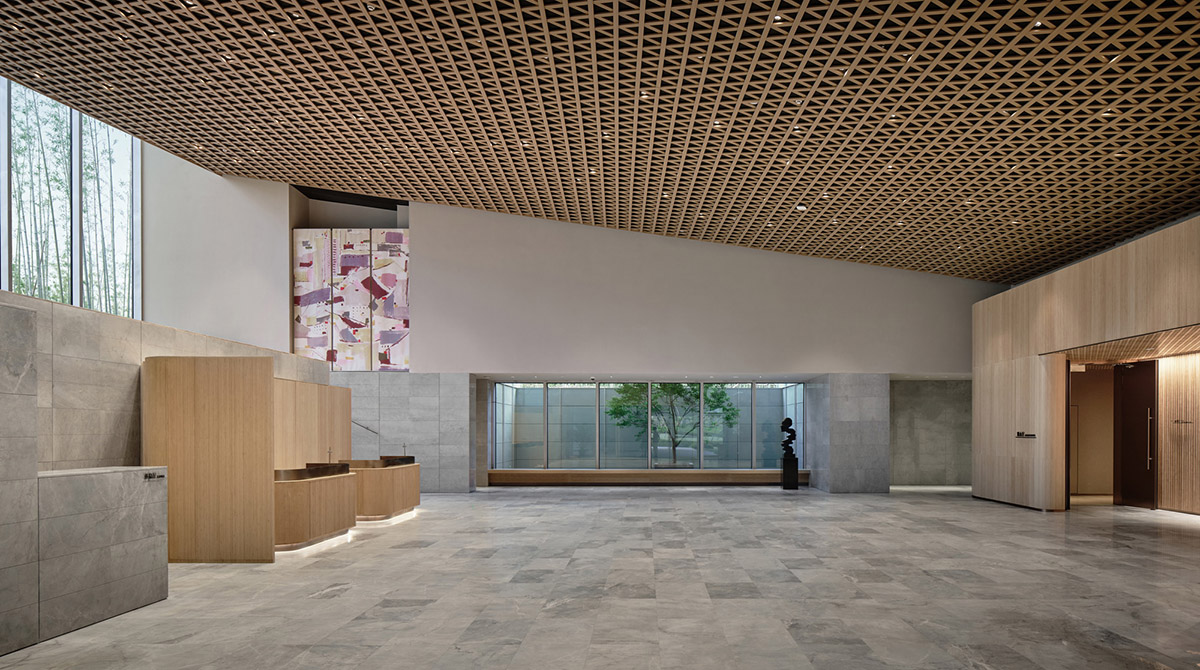 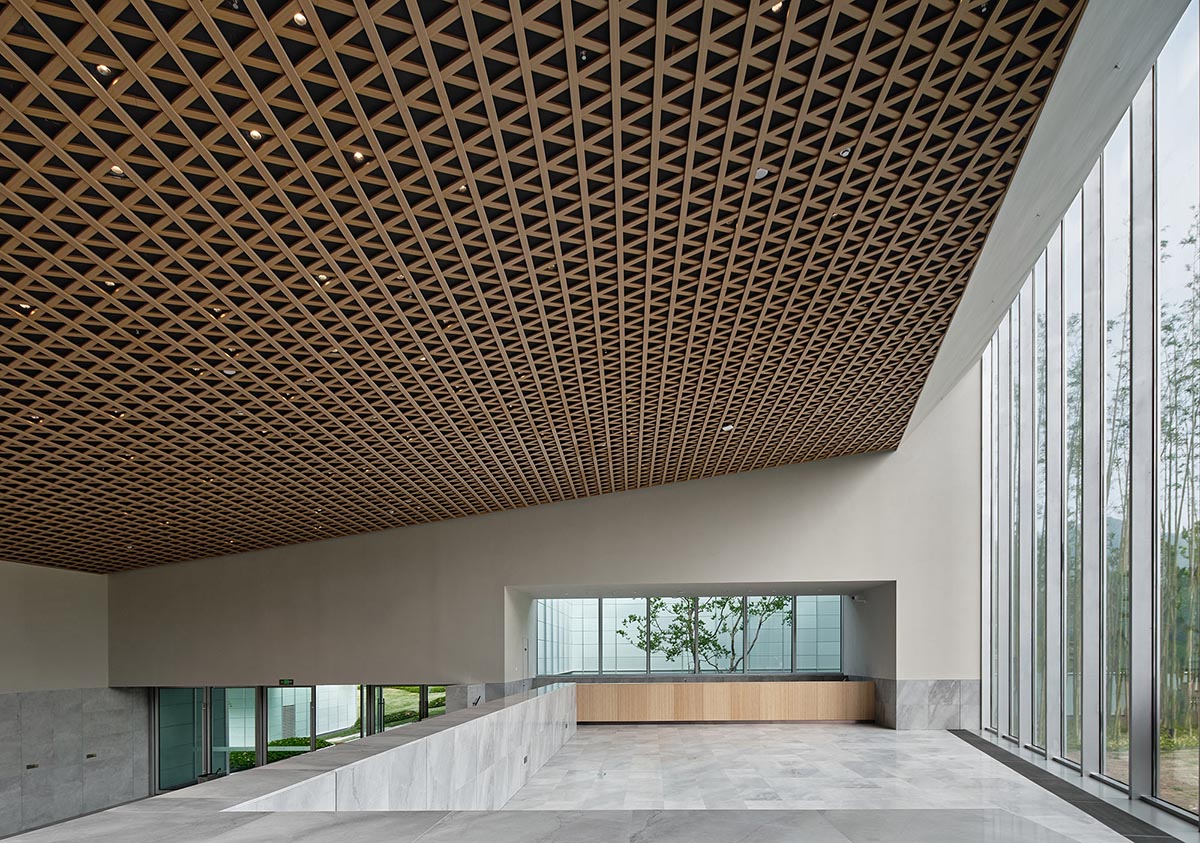 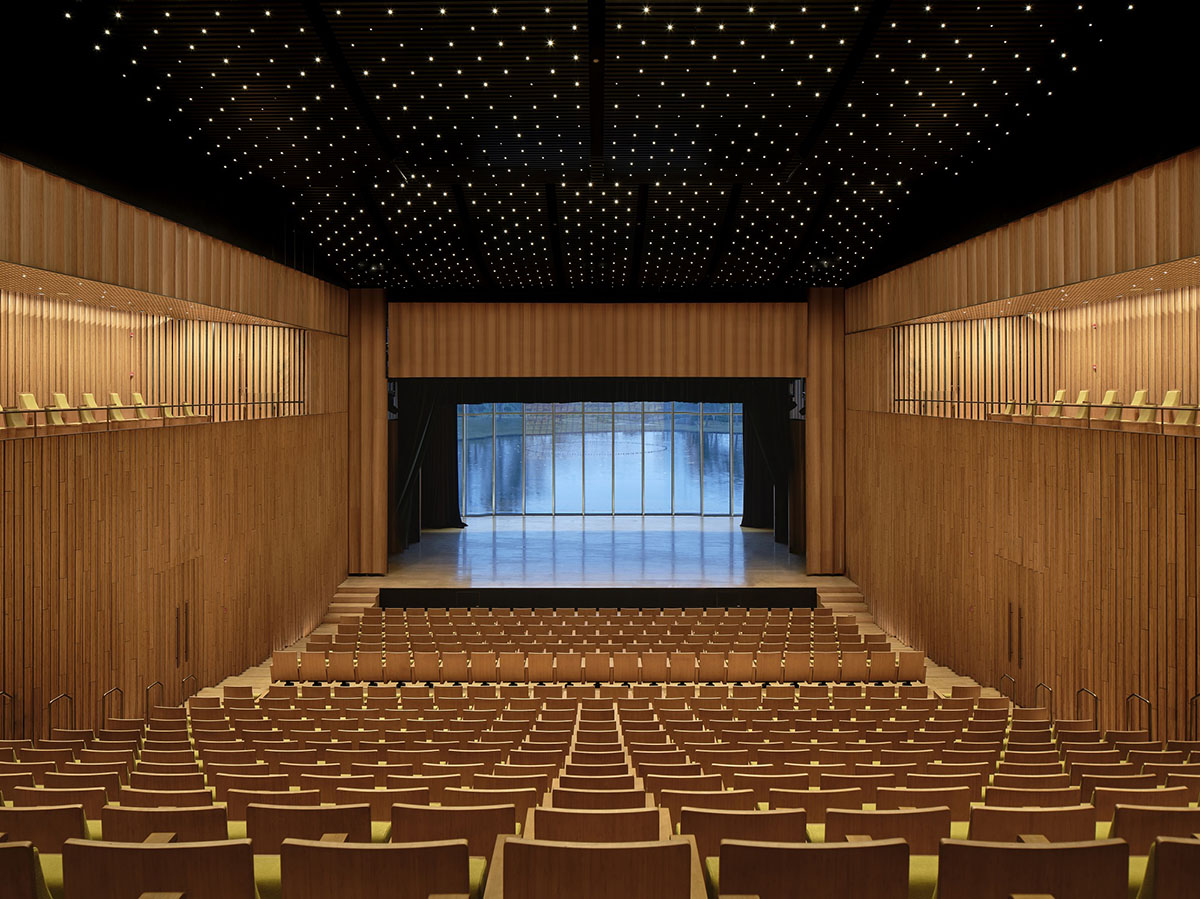 The auditorium and the stage. Image © AOGVISION 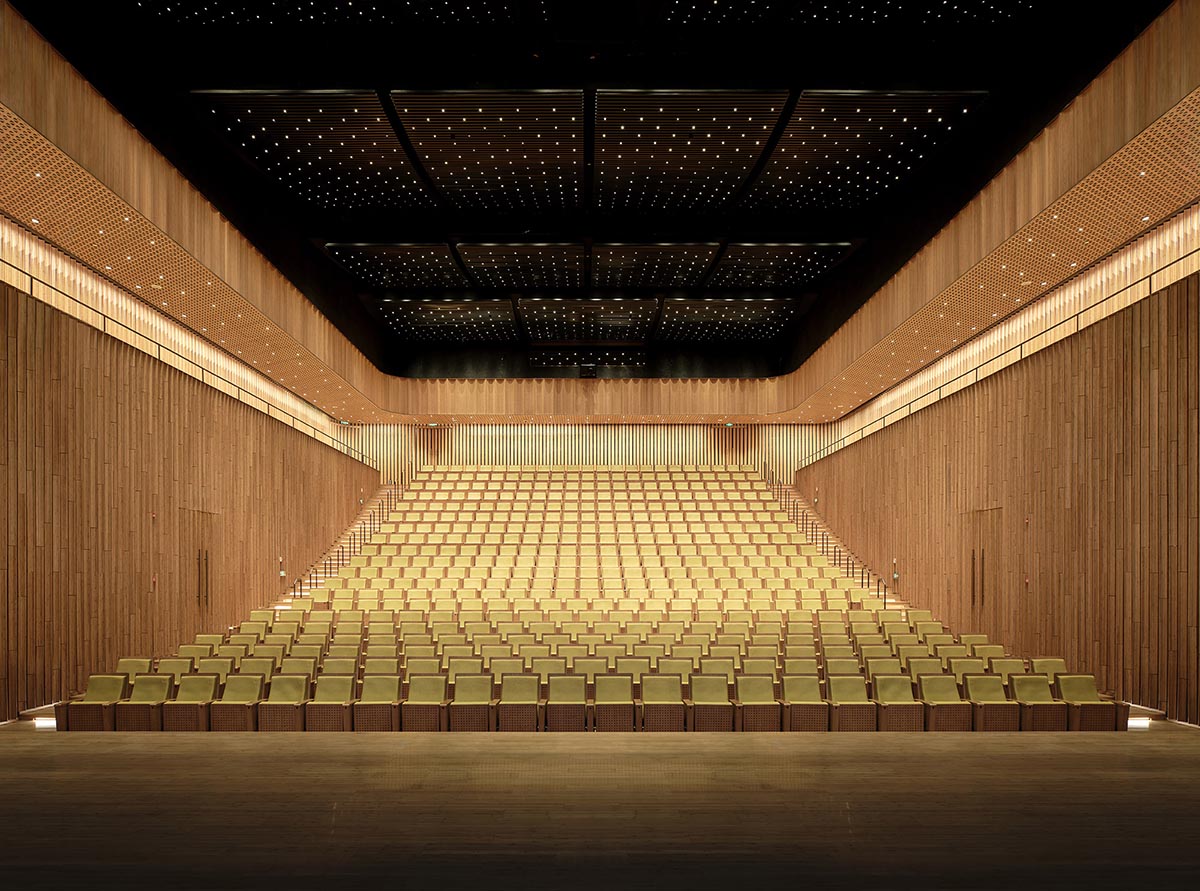 The auditorium with bamboo and wood. Image © AOGVISION 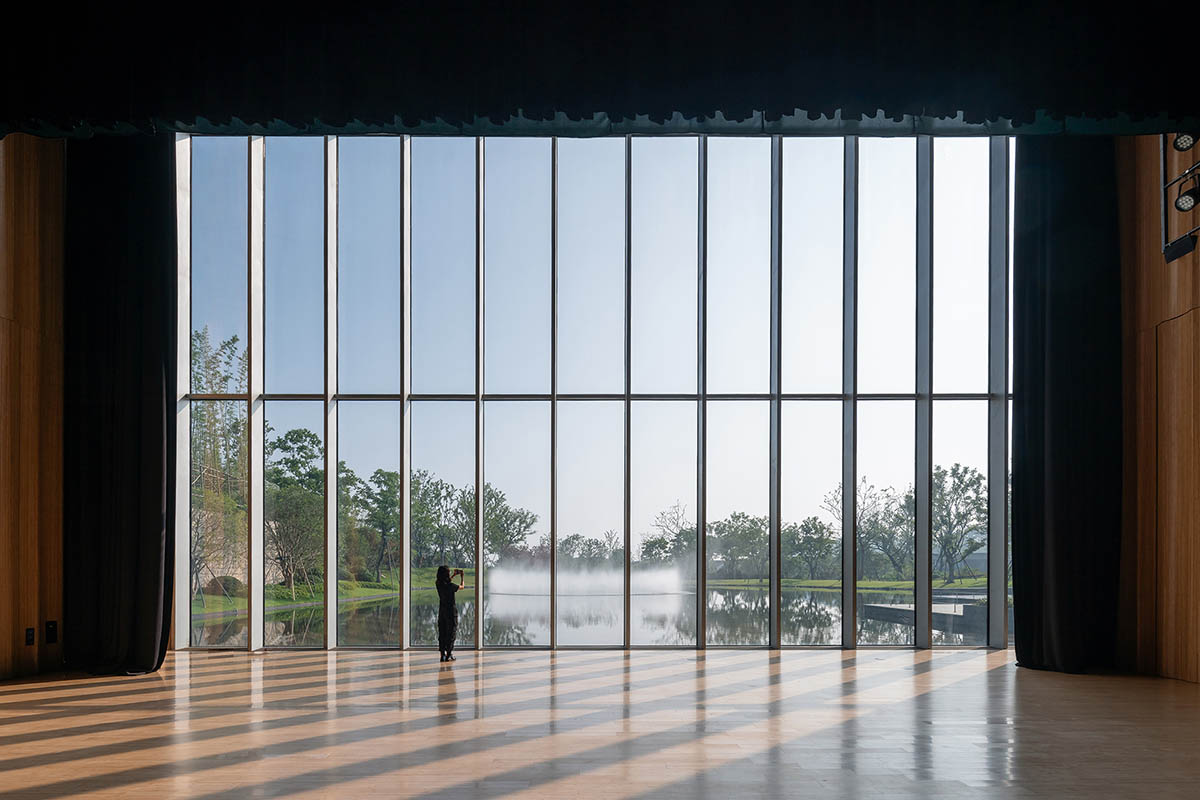 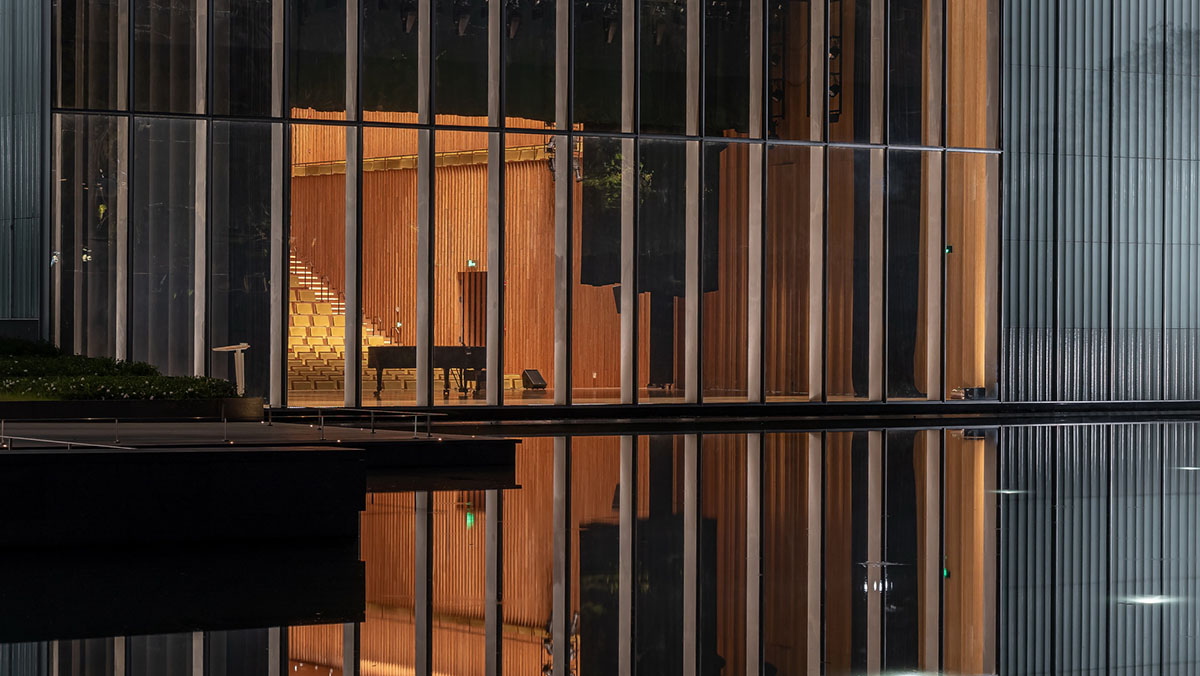 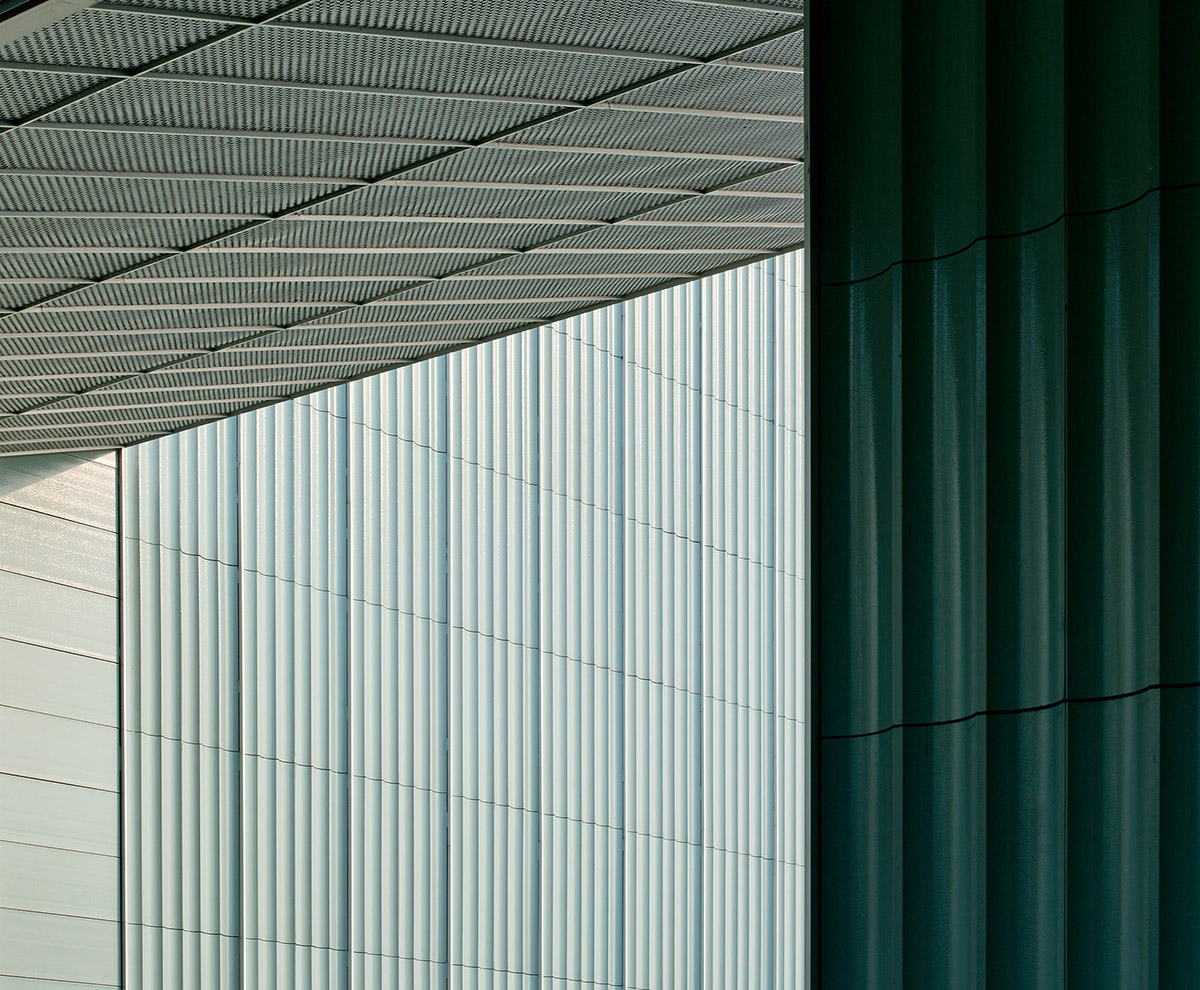 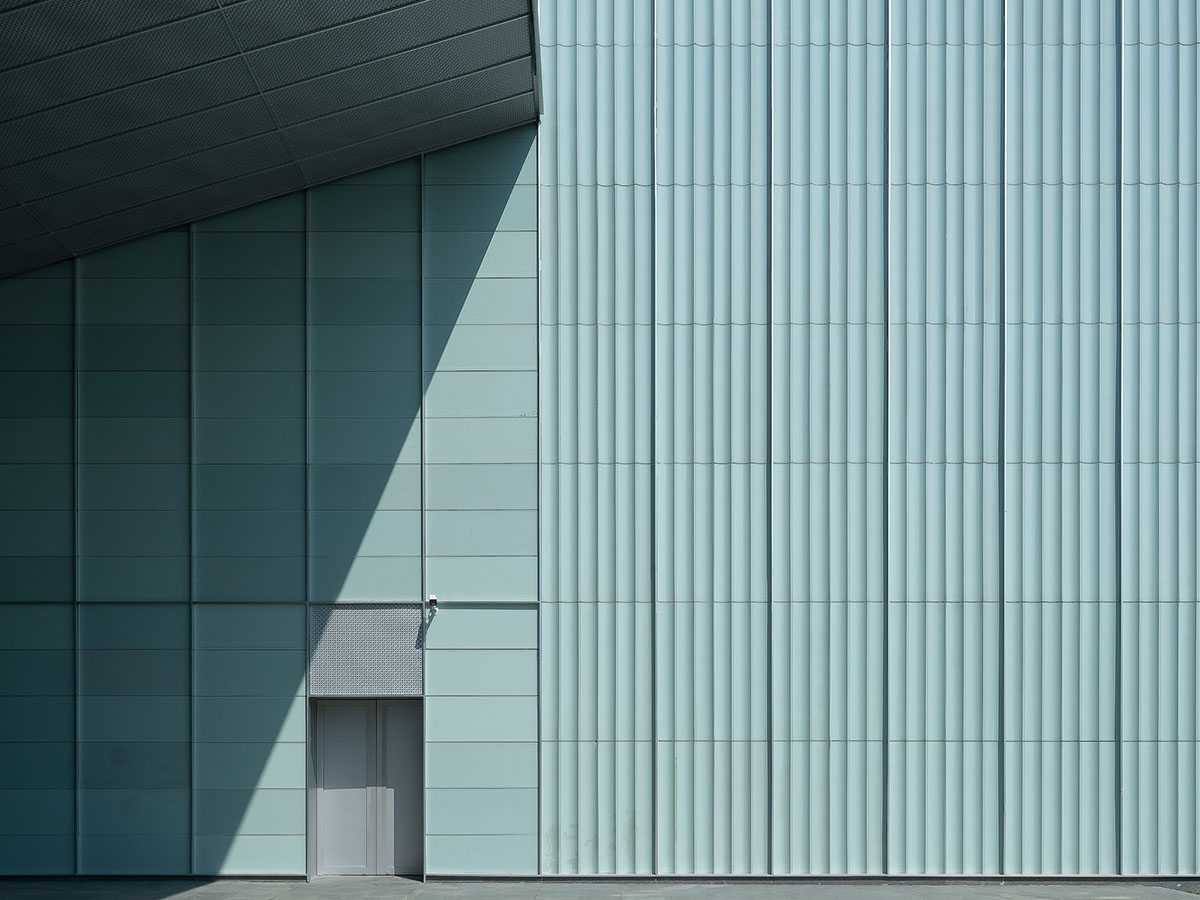 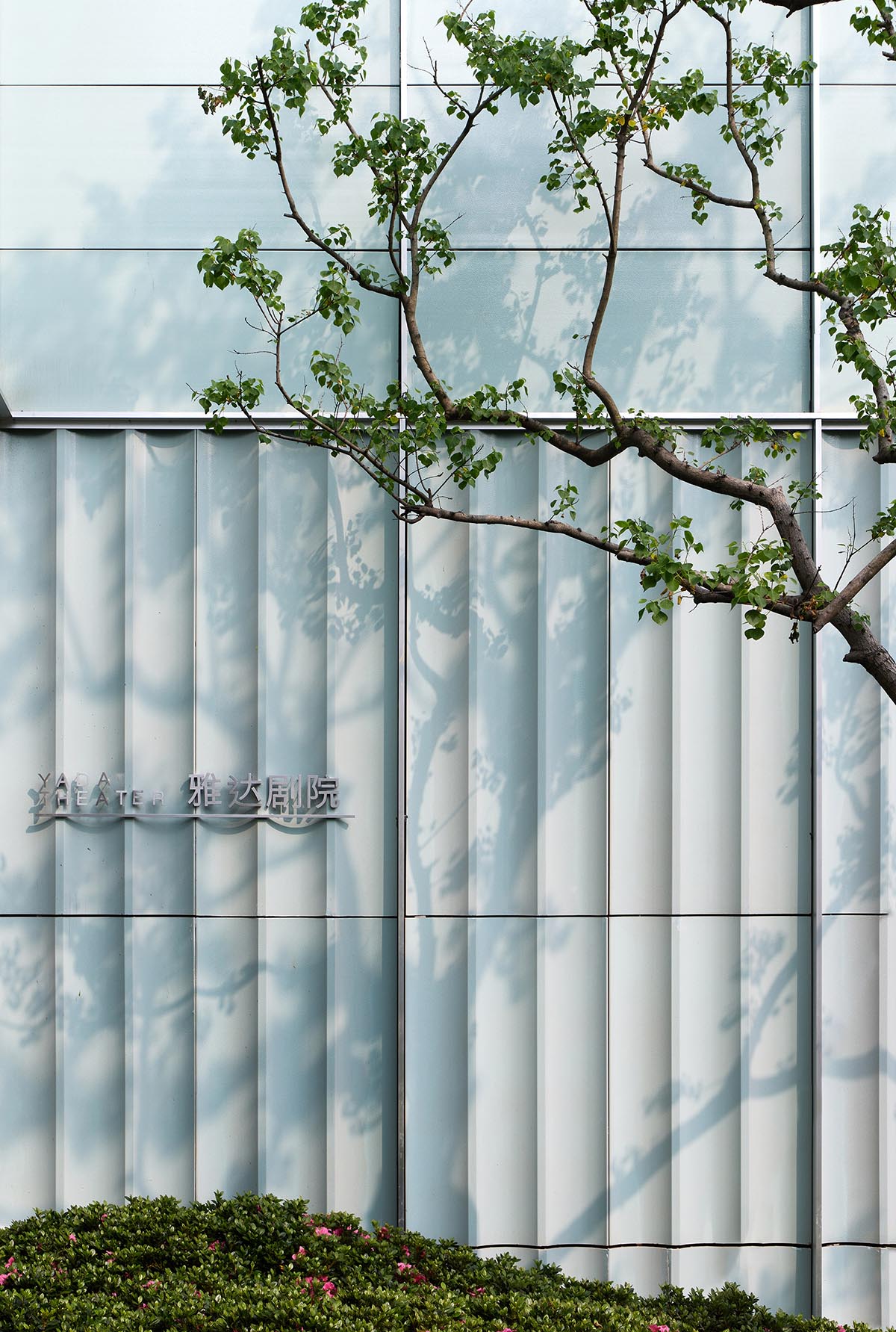 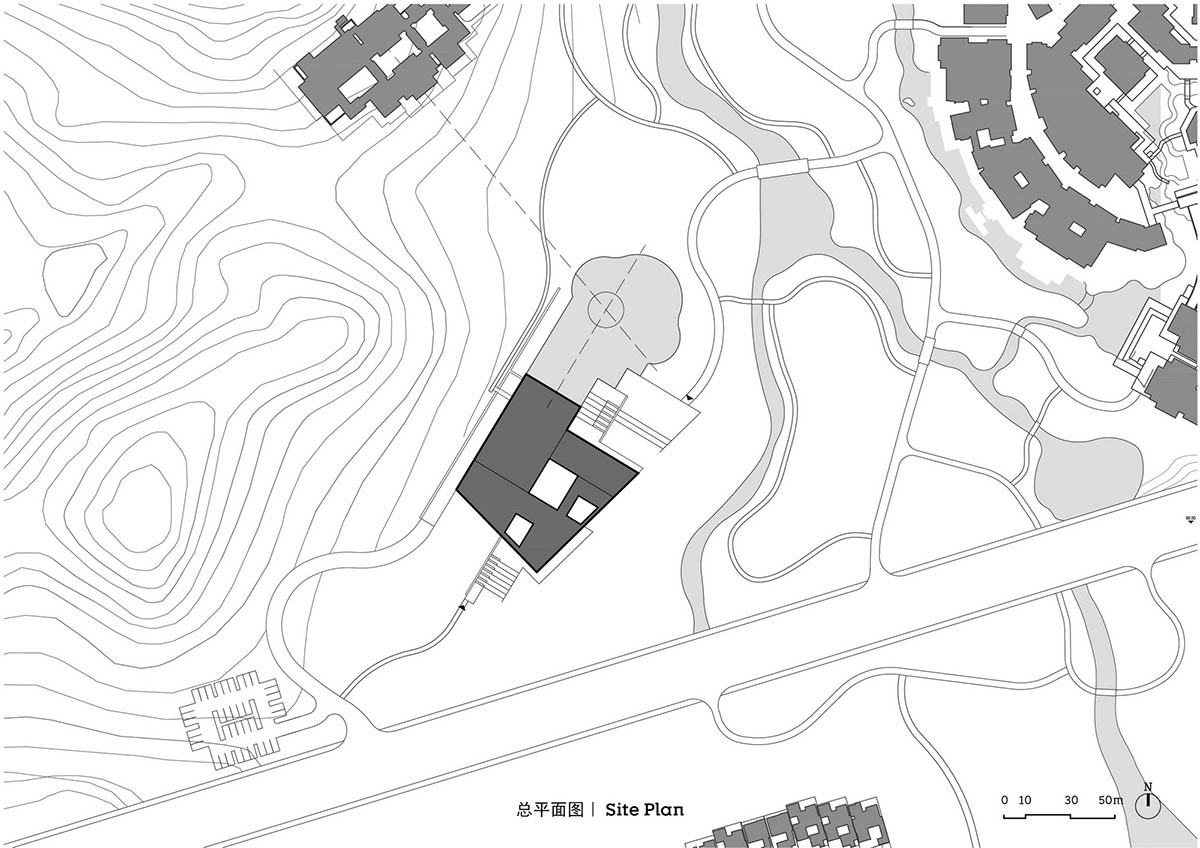 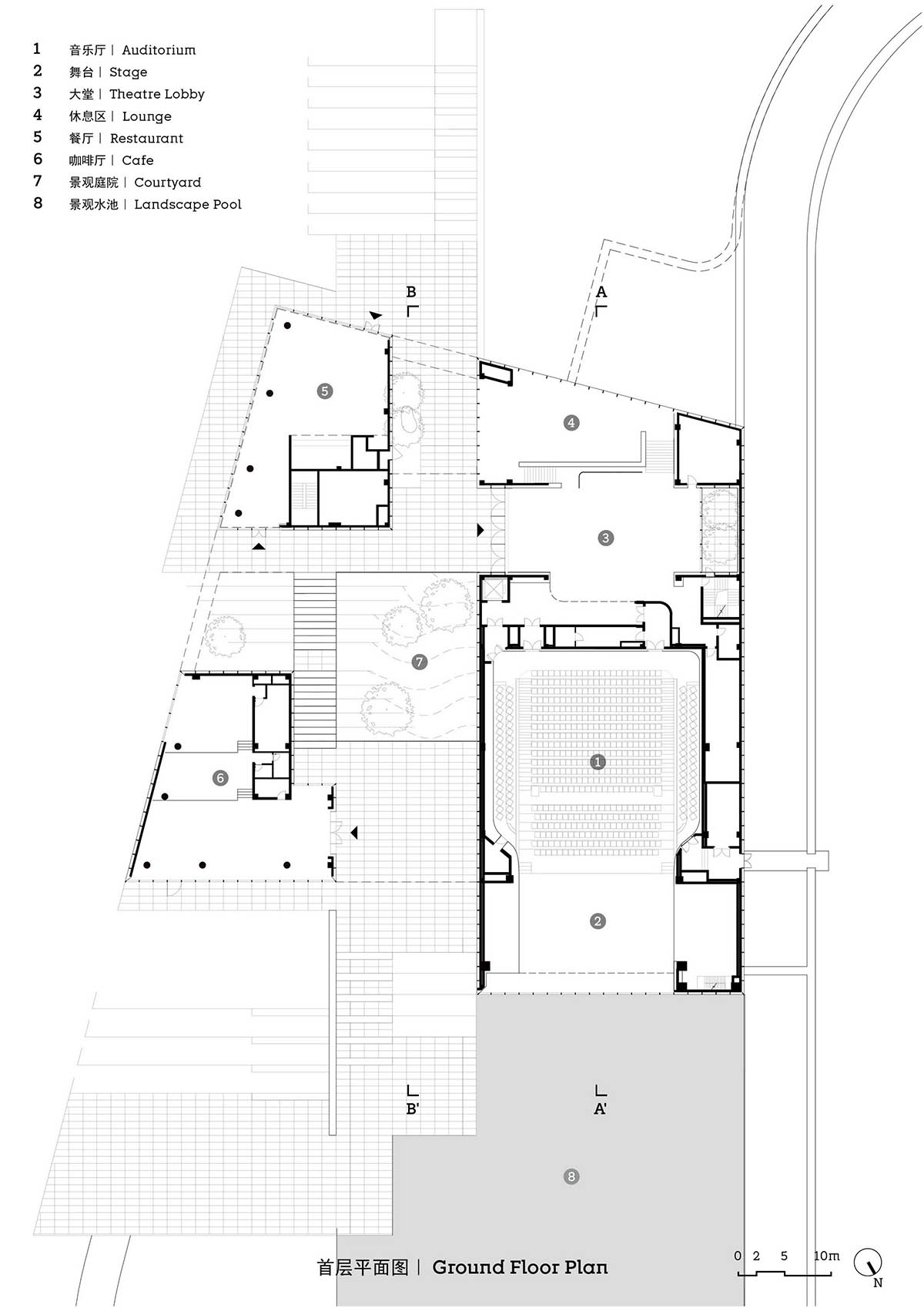 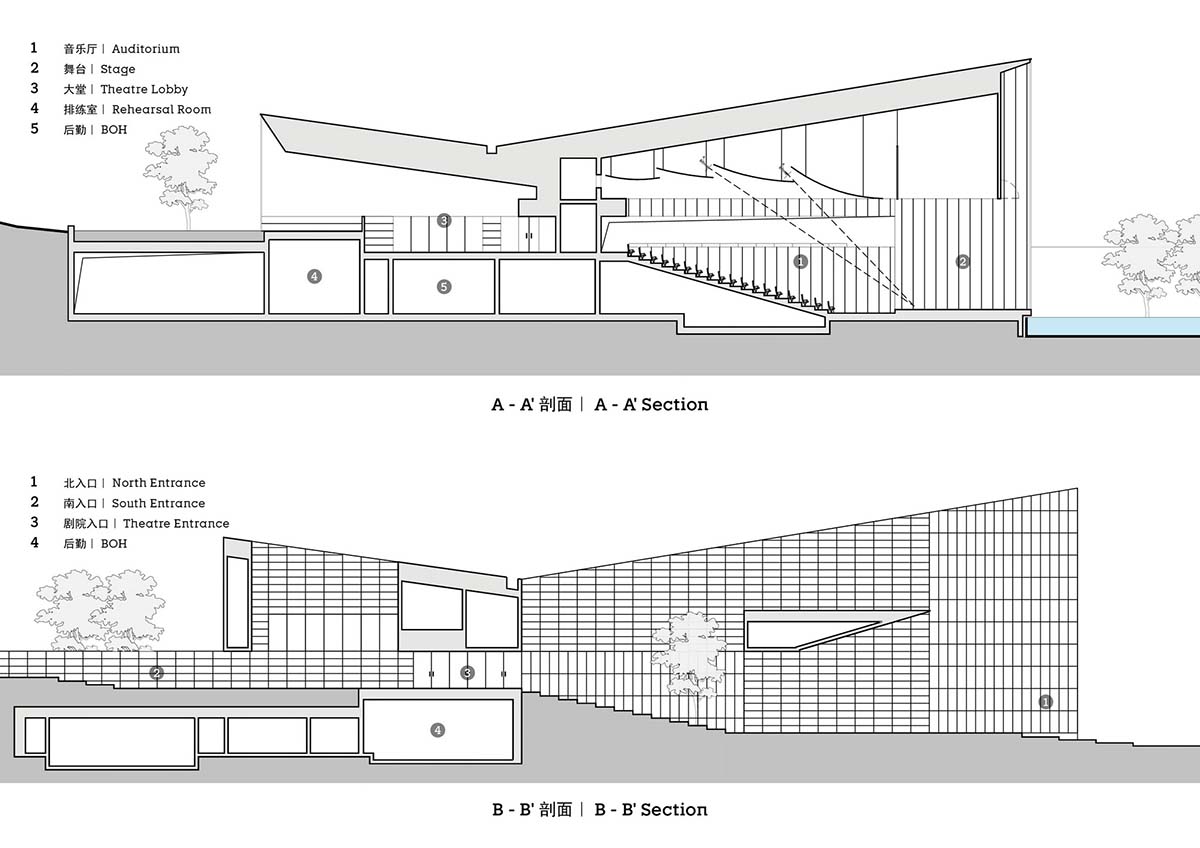 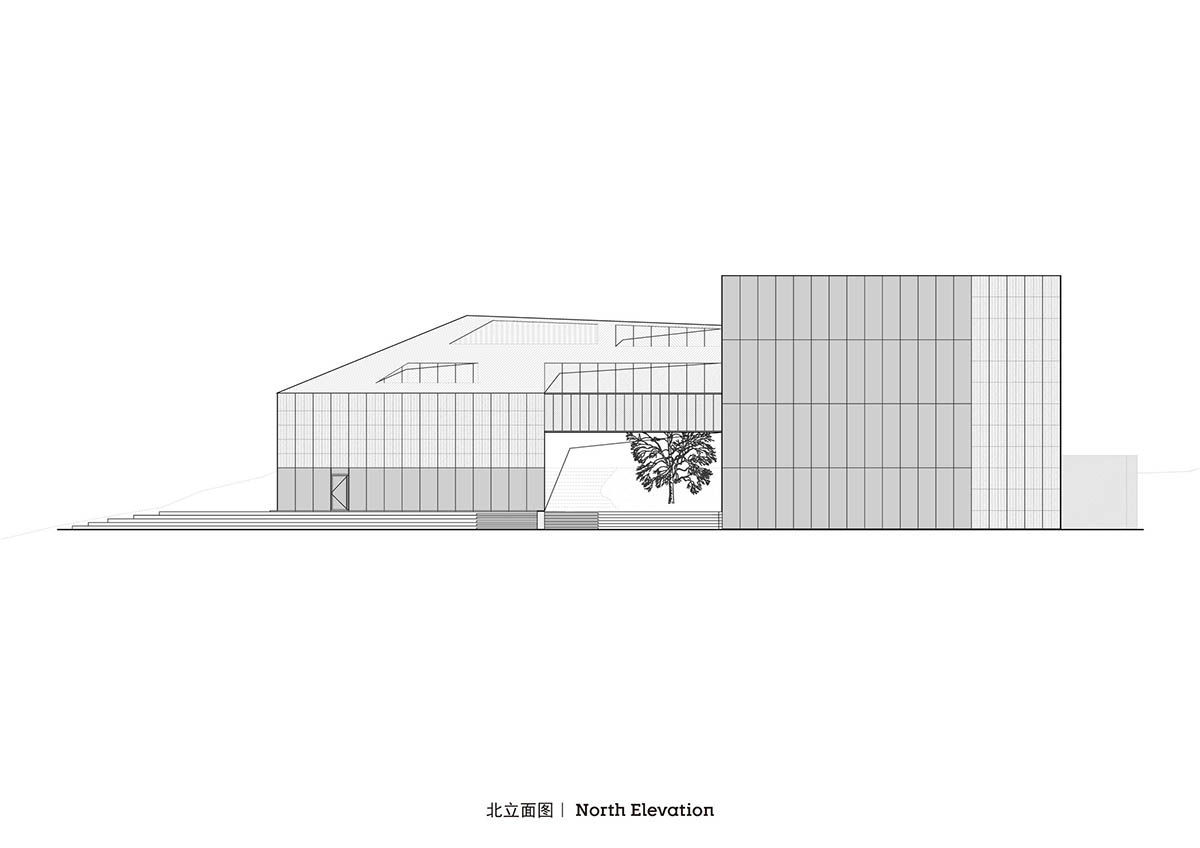 Section of the auditorium and lighting arrangement. Image © GOA 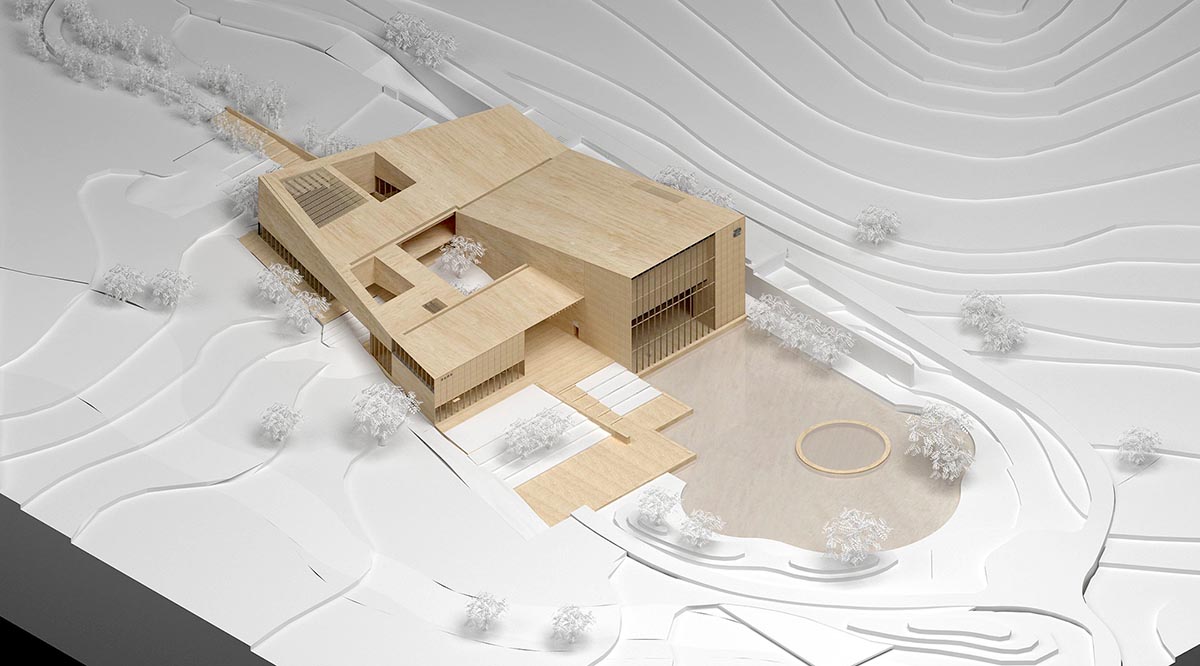 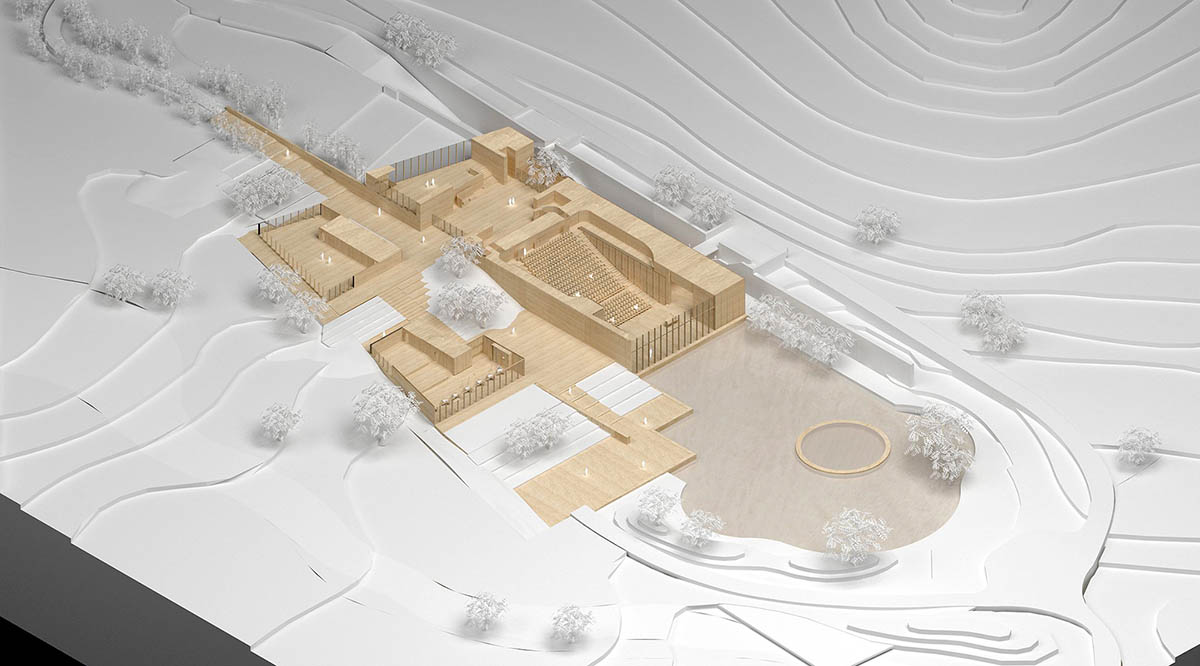 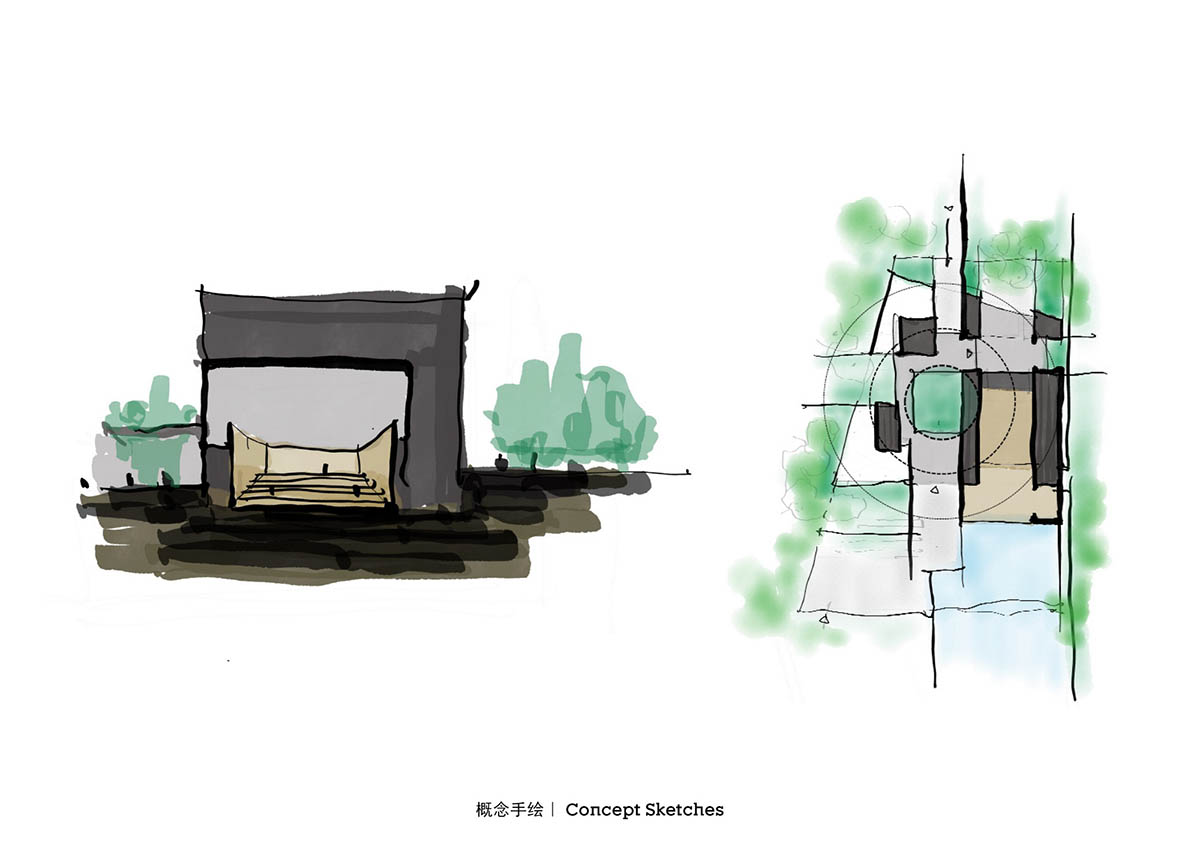