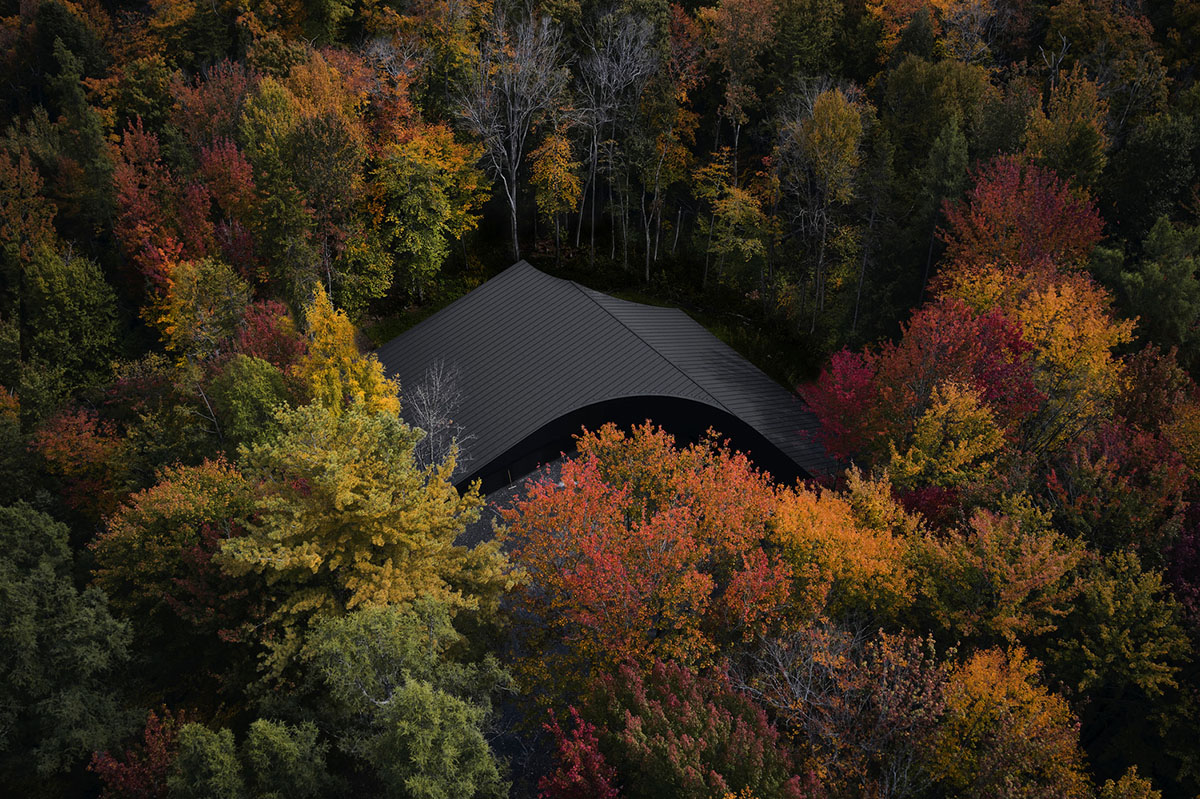 Studio Jean Verville architectes has designed a studio-house that converges a mathematical logic with artistic touches in a forest in Laurentides, Canada.

Named MEV, the 181-square-metre studio-house features a black-colored skin with an undulating roof, while the interior design features orange-colored, reflected materials that create a kaleidoscopic effect.

The retreat cabin was commissioned by two admirable eccentrics, who are passionate about art and Italian design of the 80s to design a refuge cabin nestled in the forest. 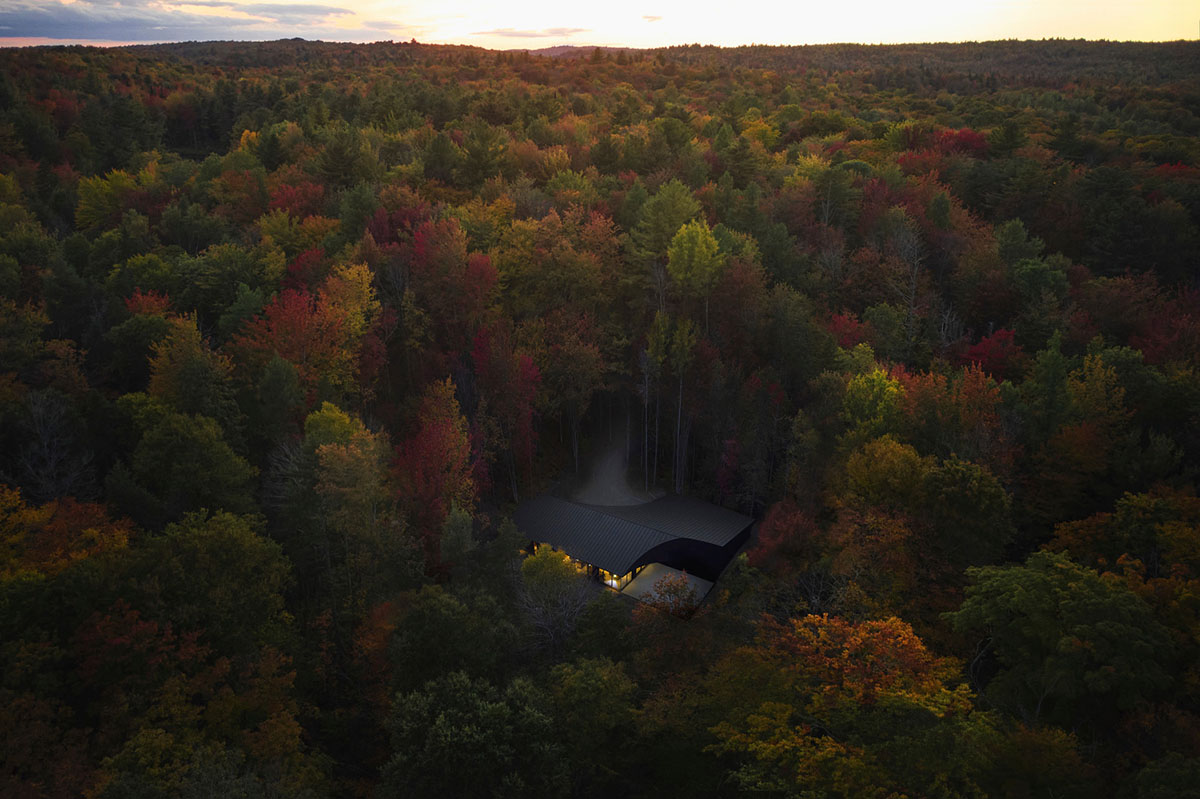 The main goal of this project was to host their daily lives with a whimsical energy, a challenge in absolute cohesion with the disruptive approach of the Studio.

Read the full narrative with the architects' own words. The project embraces a personalized alternative universe, designed in a collaborative spirit and a ludicization approach and then developed with architectural mathematical rigor. 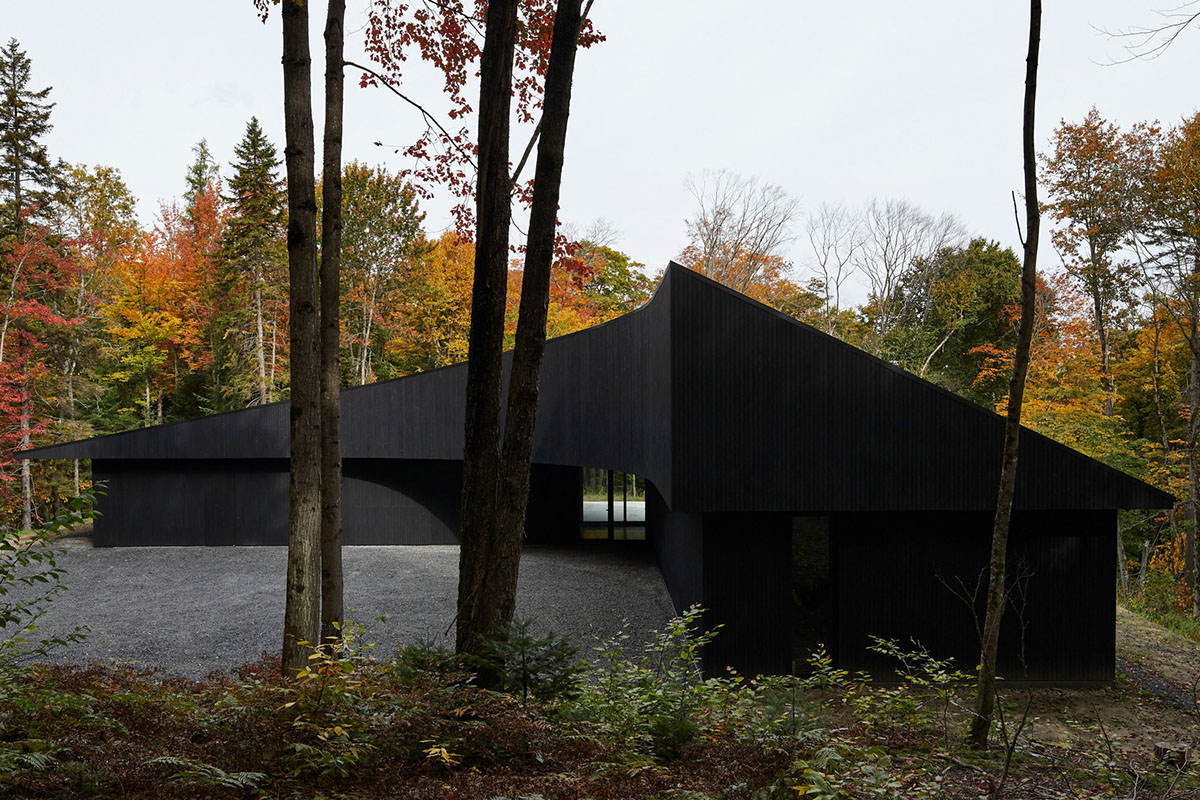 MEV exploits the association of geometries and colors under the impetus of the rebellious universe of the Italian group, Memphis, antithesis to monotony and the monochromatic architecture and design of his time.

Constellated with meticulous maneuvers that evoke this wacky universe of the 80s, the project celebrates a multiplicity of references in a system of expressive and contrasting relationships in order to communicate the personalities of the owners. 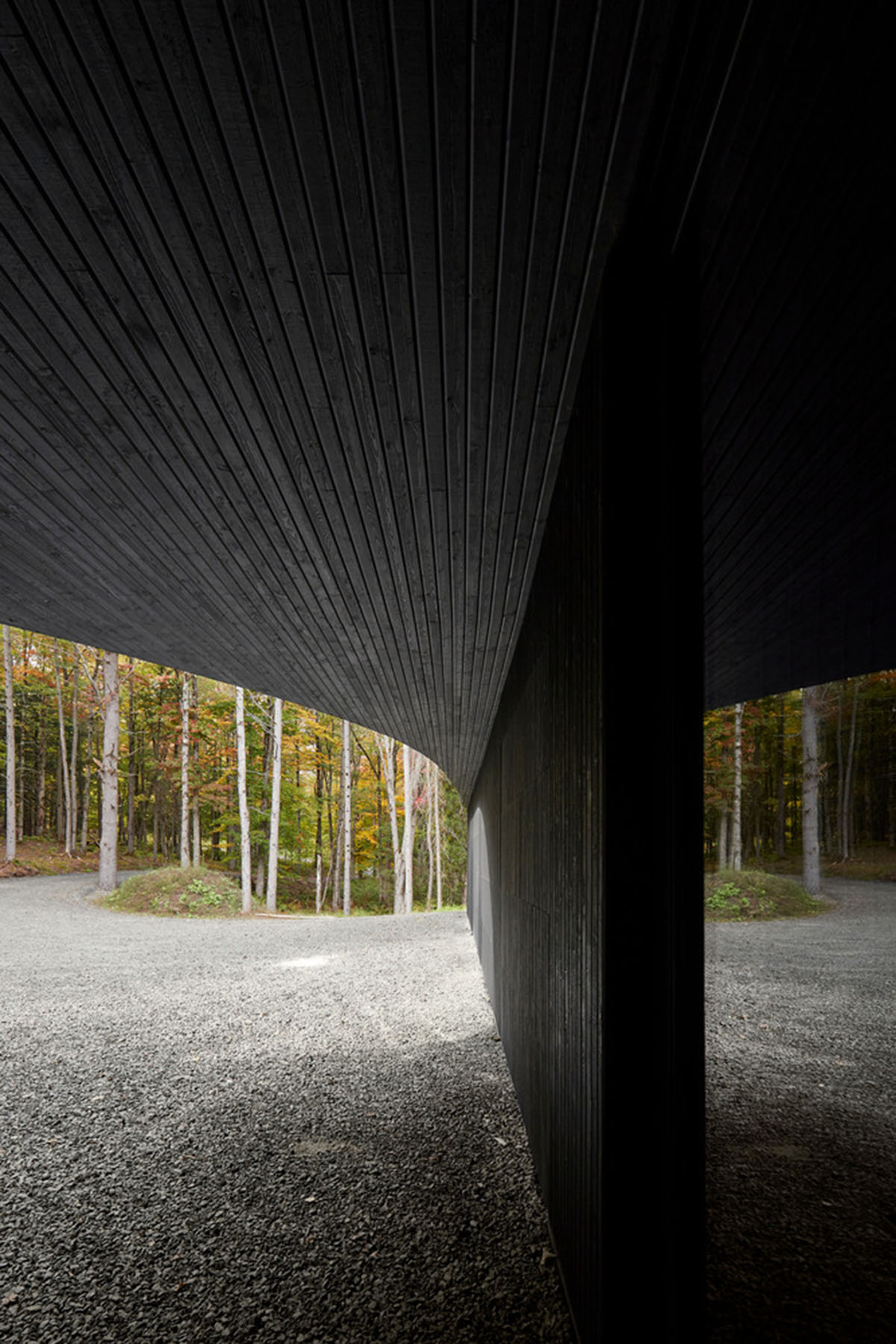 For the sake of integration into surrounding nature, this house-studio reveals an organic form and a raw appearance, confronting its materials with a set of curved lines in a meticulous implementation. Its extravagance manifests itself in interiors with graphics, where volumes and materials develop in a sparkling chromatic organization. 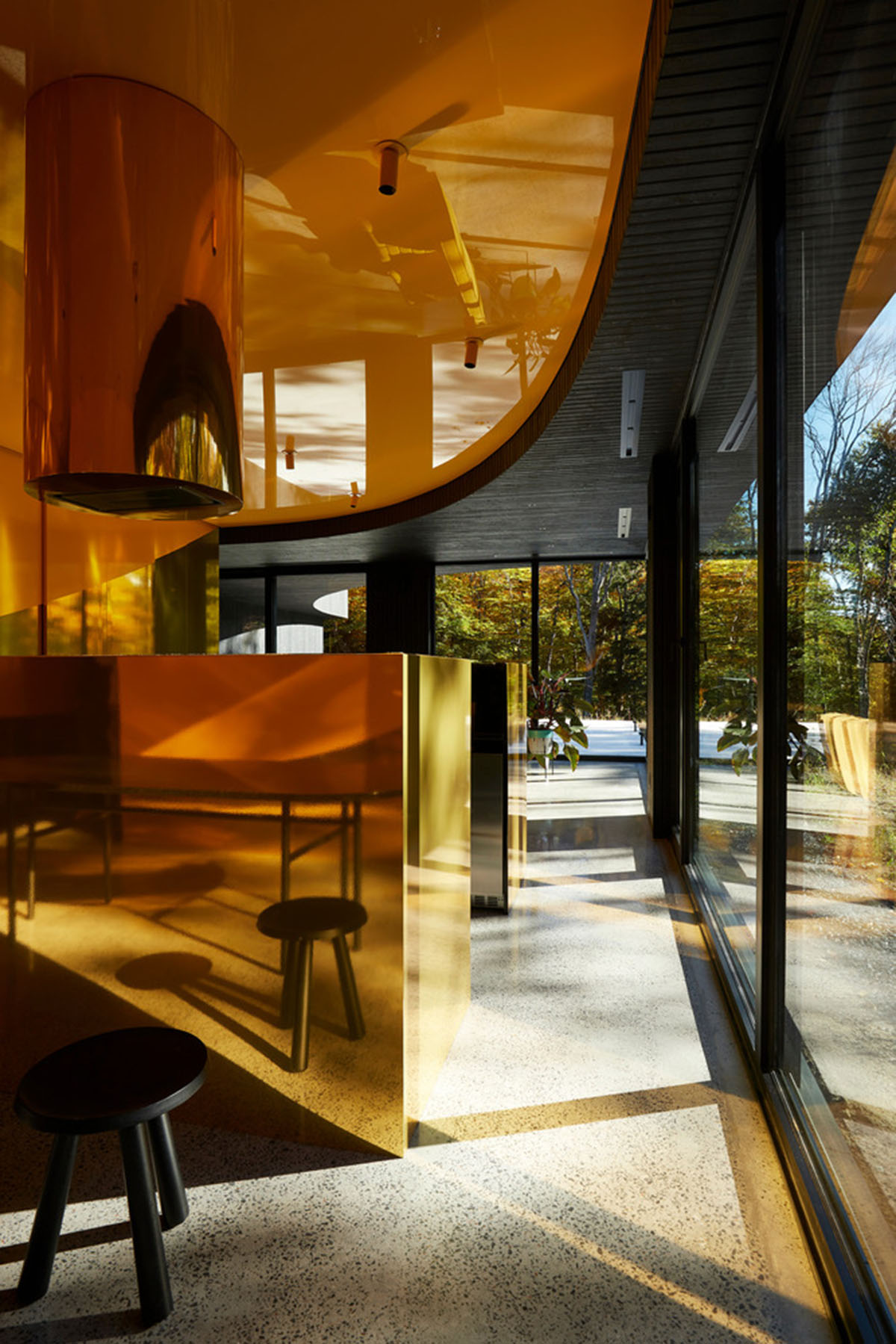 The location of this eclectic ensemble is determined by the presence of a stream that crisscrosses the land. On the south side, the linear layout of the rooms allows a constant view of the landscape and its stream.

On the north side, two distinct volumes, connected by an entirely glazed entrance, appear like a long blind facade unified by a single roof. 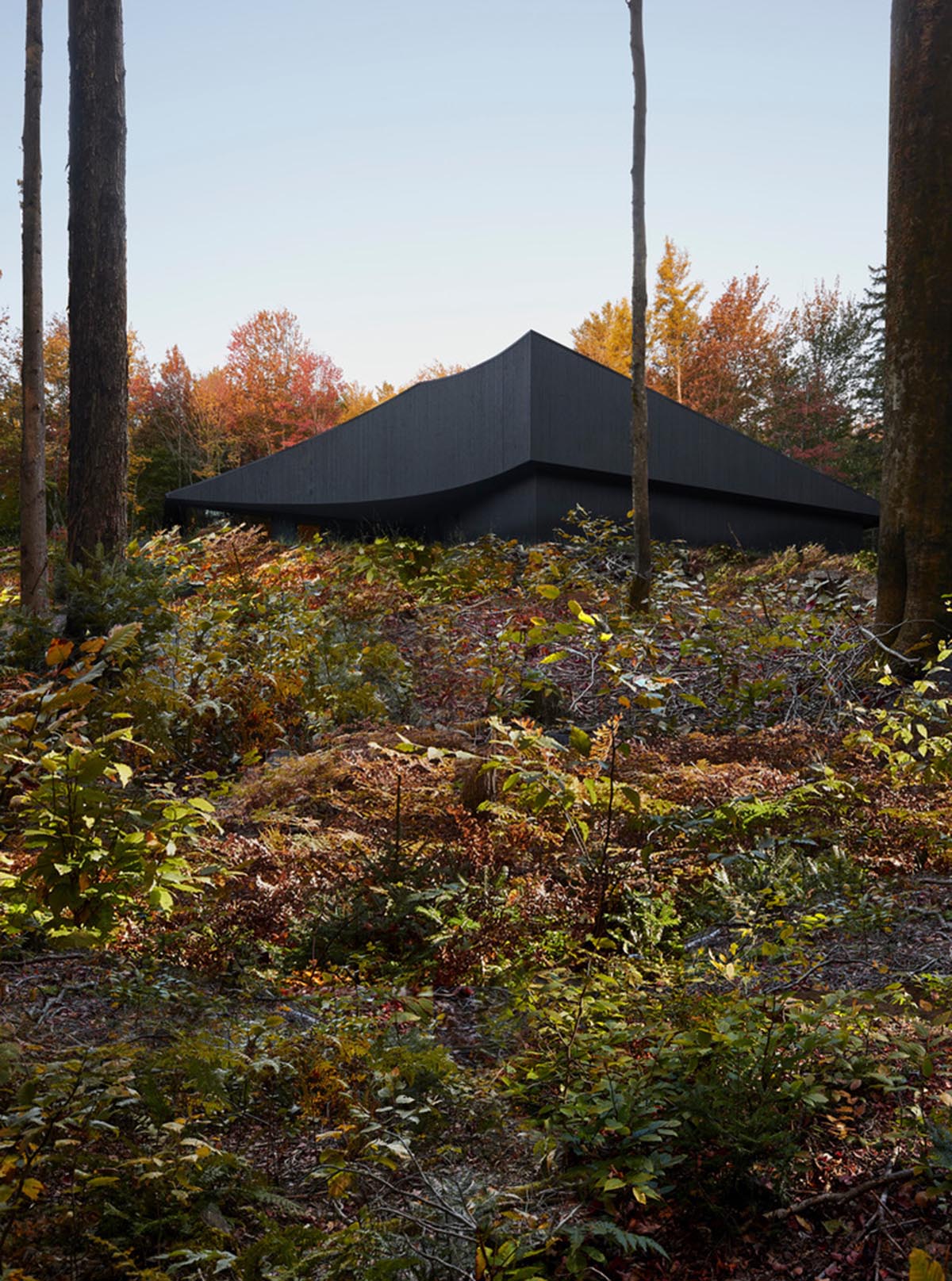 While an entirely mathematical logic of functionality invites the exclusion of roof surfaces in a Boolean diagram, its shape is redefined by a shift in the axis of the ridge, which thwarts the reading of the volumetry and animates the silhouette of a new complexity.

Converging in a set of formal solutions, volumes conceal both storage and domestic elements to articulate a structured system. Playing with the possibilities of visual impact, the textures, colors, and materials exploit light in a kaleidoscopic reflection. 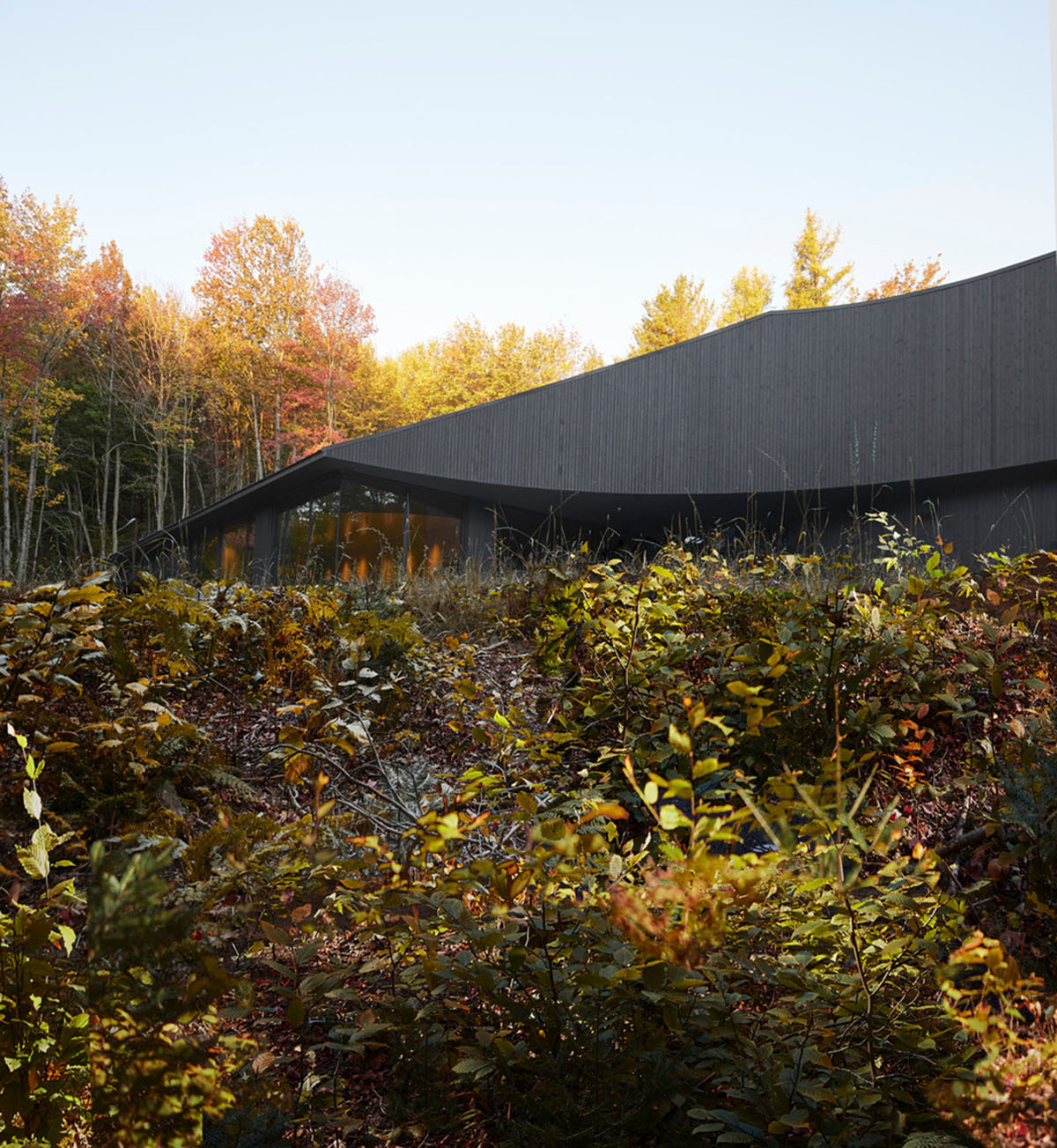 Volumes and surfaces play games of formal opposition, adorning themselves with a panache of elements, patterns, and colors vying for traces of childhood.

Quintessence of the getaway in nature, the Laurentian forest welcomes the house-studio on a parcel of its territory that has remained out of reach, providing a place of life and work, both vibrant and free. 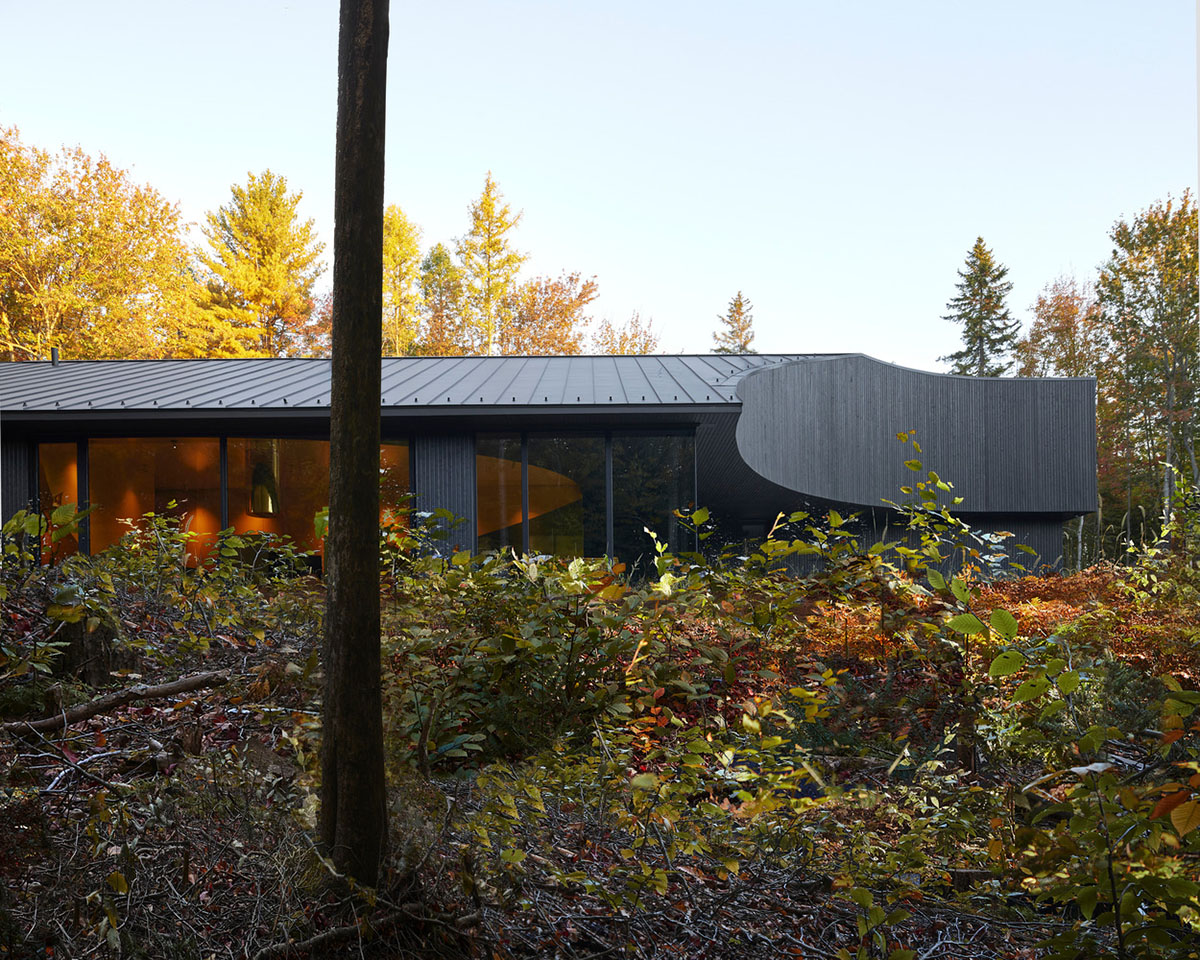 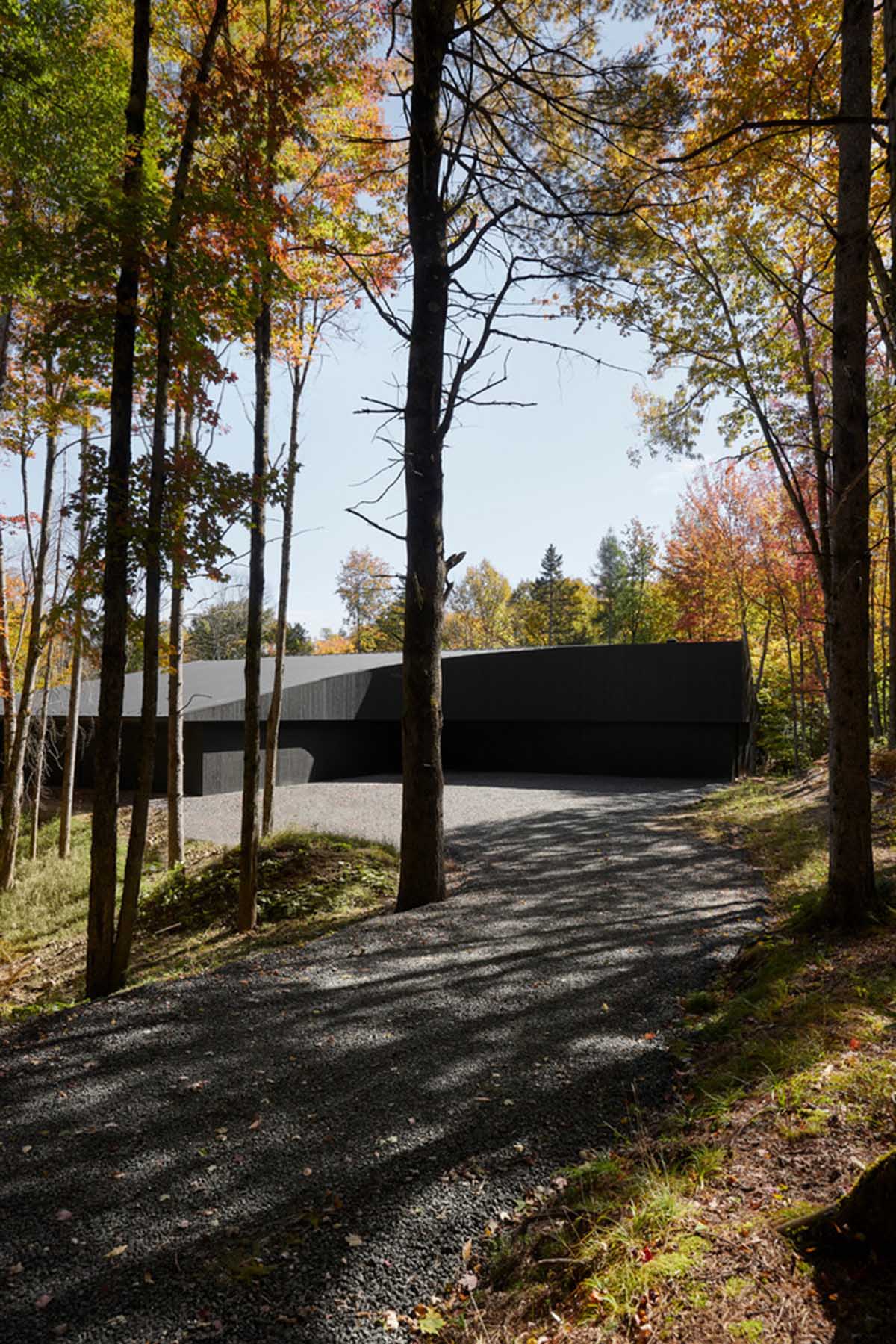 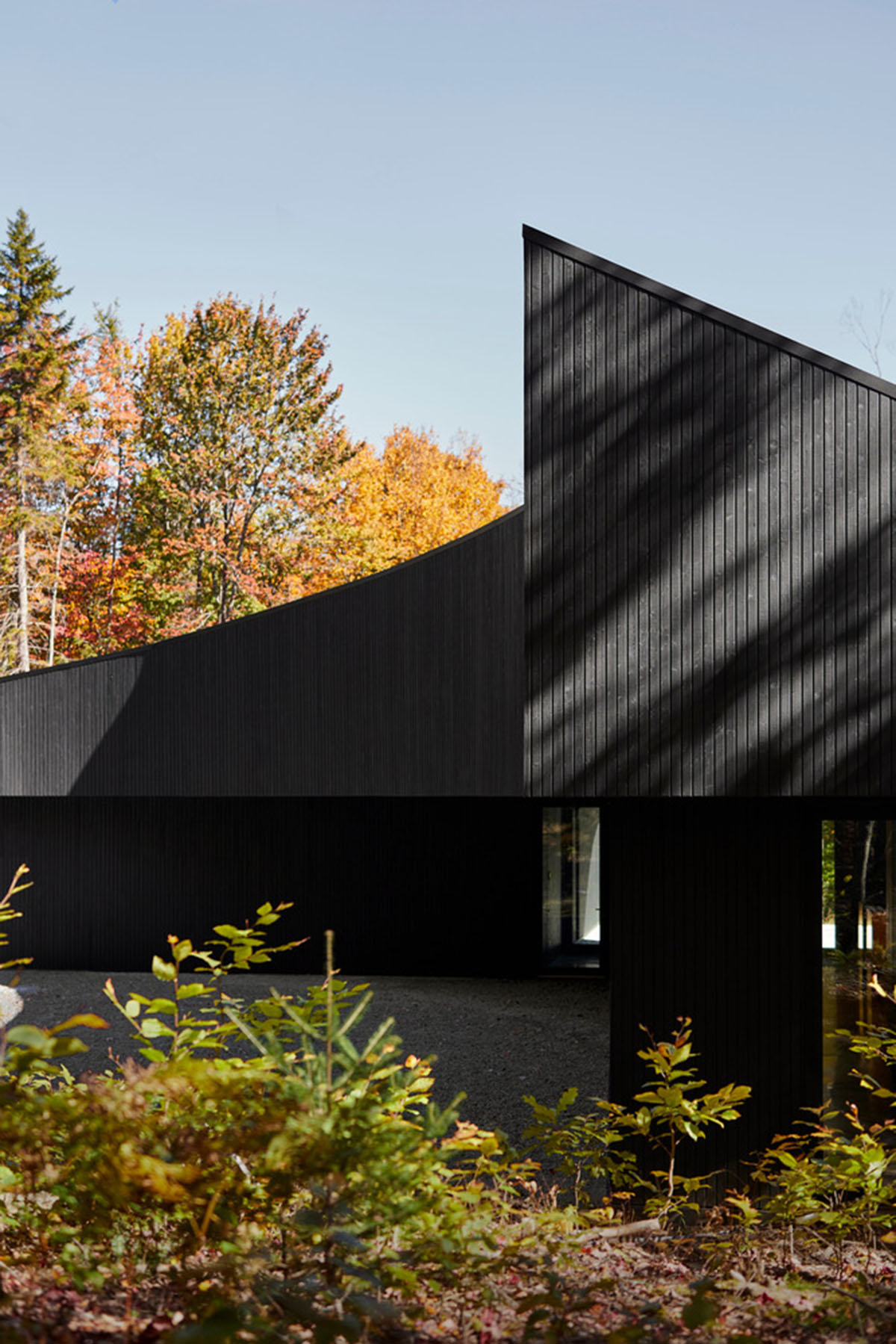 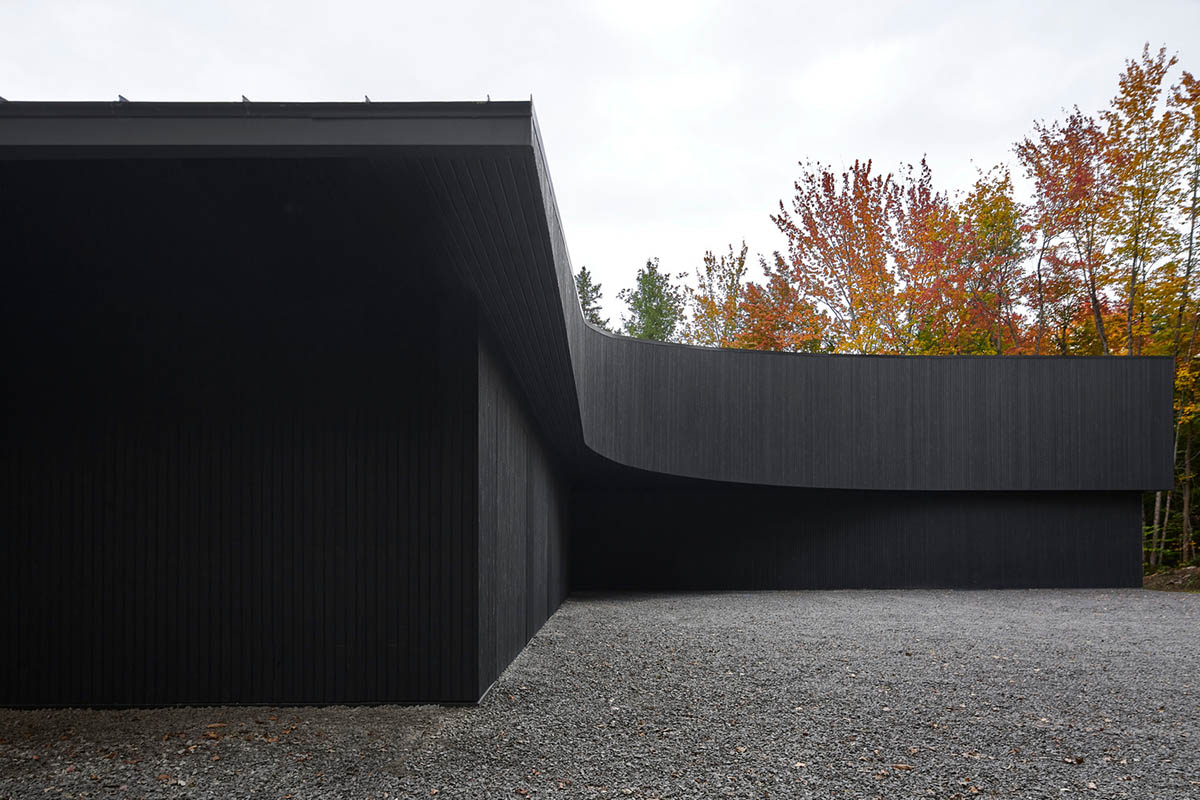 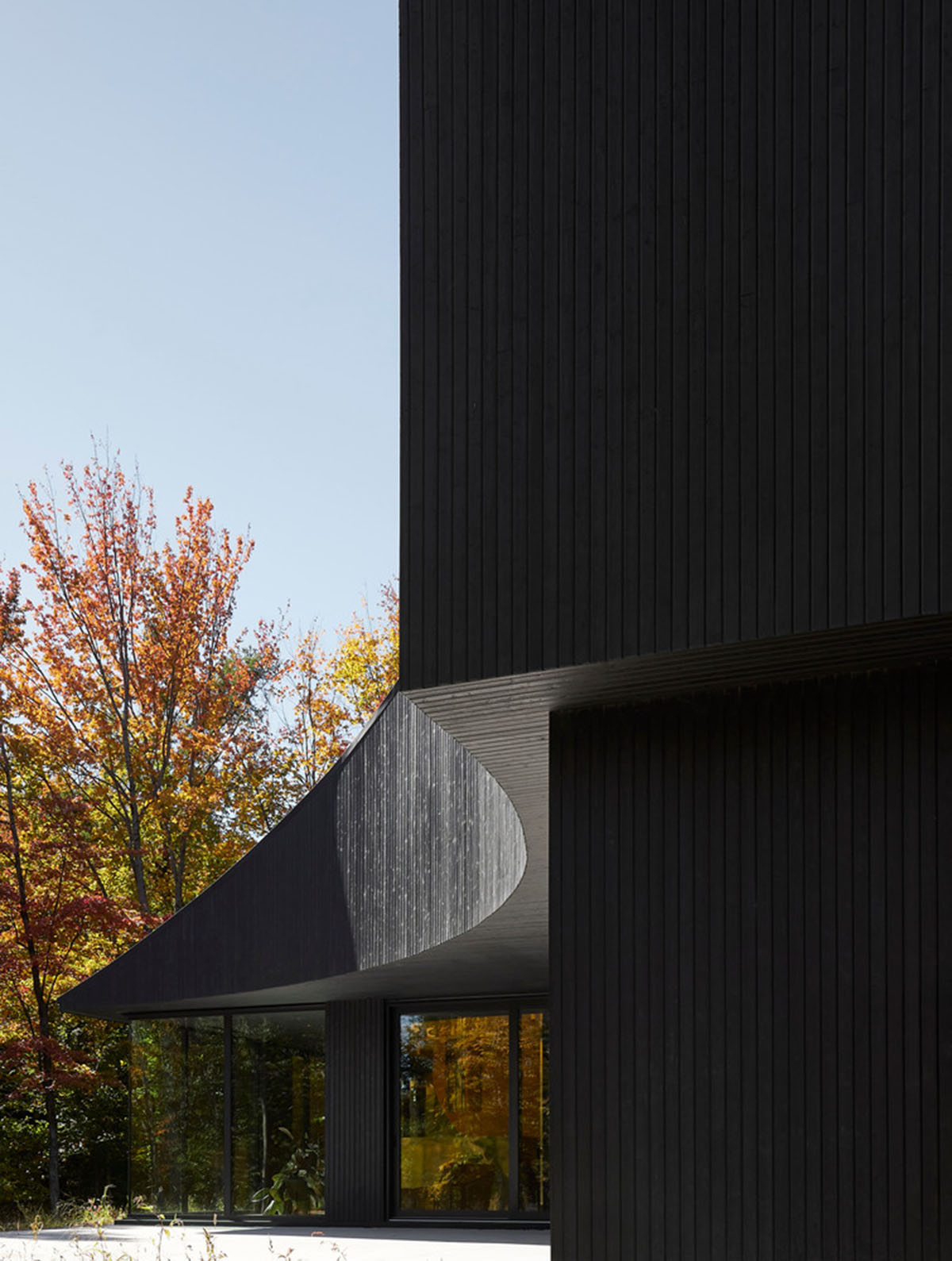 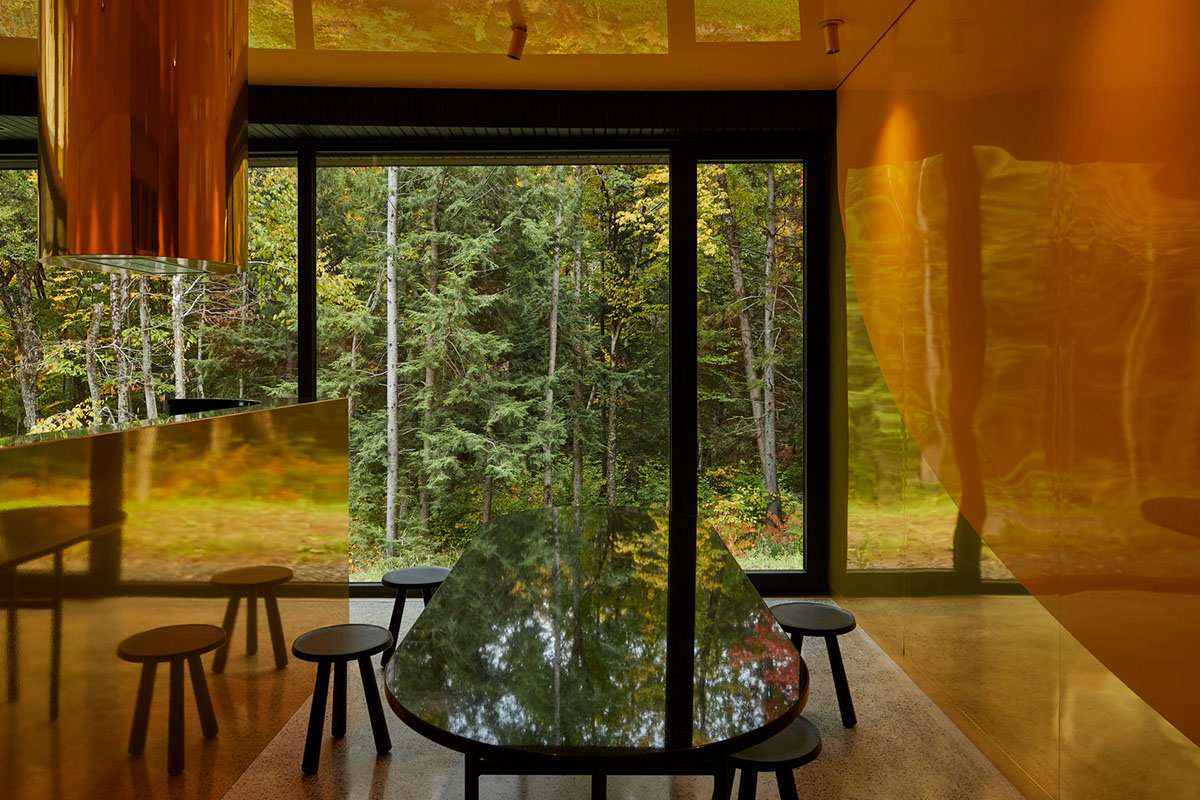