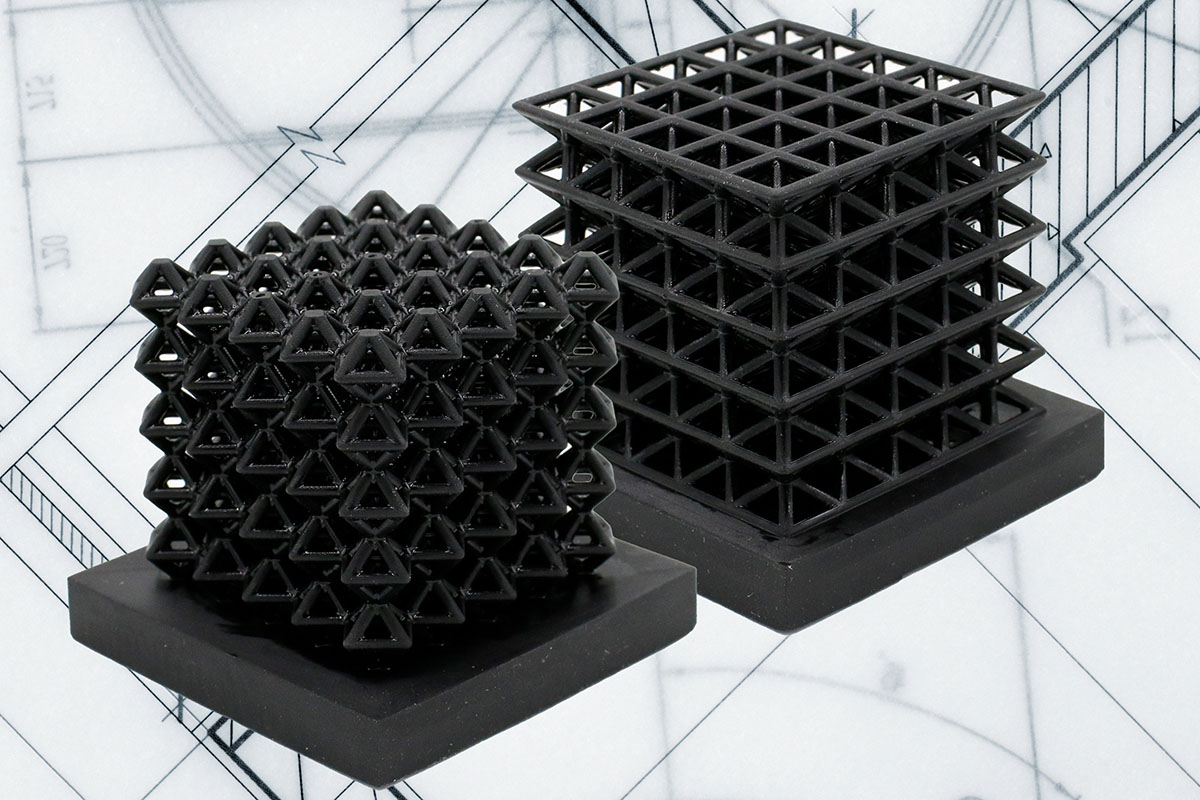 The researchers and authors Lillian Chin, Ryan Truby, Annan Zhang, and Daniela Rus at Massachusetts Institute of Technology (MIT) have developed a method for 3D printed materials to detect how they are moving and interacting with the environment.

The researchers have devised this method by using sensing structures, such as 3D-printed lattice materials, and incorporated networks of air-filled channels into the structure during the printing process.

Through these air-filled channels, they are able to measure changes in air pressure, when the structure is squeezed, bent, or stretched, which allows engineers to understand how the material is moving.

Thanks to this method based on embedding sensors, according to the researchers, this approach could open up new opportunities on architected materials which include "a class of materials whose mechanical properties are programmed through form and composition."

As the researchers explain, the properties of architected materials change their mechanical properties, such as stiffness or toughness, when controlling their geometry.

For instance, they stated that in the future "this technique may also be used to create flexible soft robots with embedded sensors that enable the robots to understand their posture and movements."

Another alternative could be wearable smart devices, and the method can help provide feedback on how a person is moving or interacting with their environment.

"The idea with this work is that we can take any material that can be 3D-printed and have a simple way to route channels throughout it so we can get sensorization with structure," said co-lead author Lillian Chin, a graduate student in the MIT Computer Science and Artificial Intelligence Laboratory (CSAIL).

"And if you use really complex materials, then you can have motion, perception, and structure all in one," Chin added.

The researchers focused on "lattices"

To invent this method, the researchers focused on latticed material, which is a type of “architected material". Thanks to its geometry, the material exhibits "customizable mechanical properties."

"For instance, changing the size or shape of cells in the lattice makes the material more or less flexible," stated the researchers.

"While architected materials can exhibit unique properties, integrating sensors within them is challenging given the materials’ often sparse, complex shapes," explained the researchers.

"Instead, the researchers used 3D printing to incorporate air-filled channels directly into the struts that form the lattice. When the structure is moved or squeezed, those channels deform and the volume of air inside changes."

They could measure the corresponding change in pressure with an off-the-shelf pressure sensor, which gives feedback on how the material is deforming.

Ryan Truby, a former CSAIL postdoc who is now as assistant professor at Northwestern University, said that "Importantly, we only use one material to 3D print our sensorized structures."

"We bypass the limitations of other multimaterial 3D printing and fabrication methods that are typically considered for patterning similar materials," Truby added. 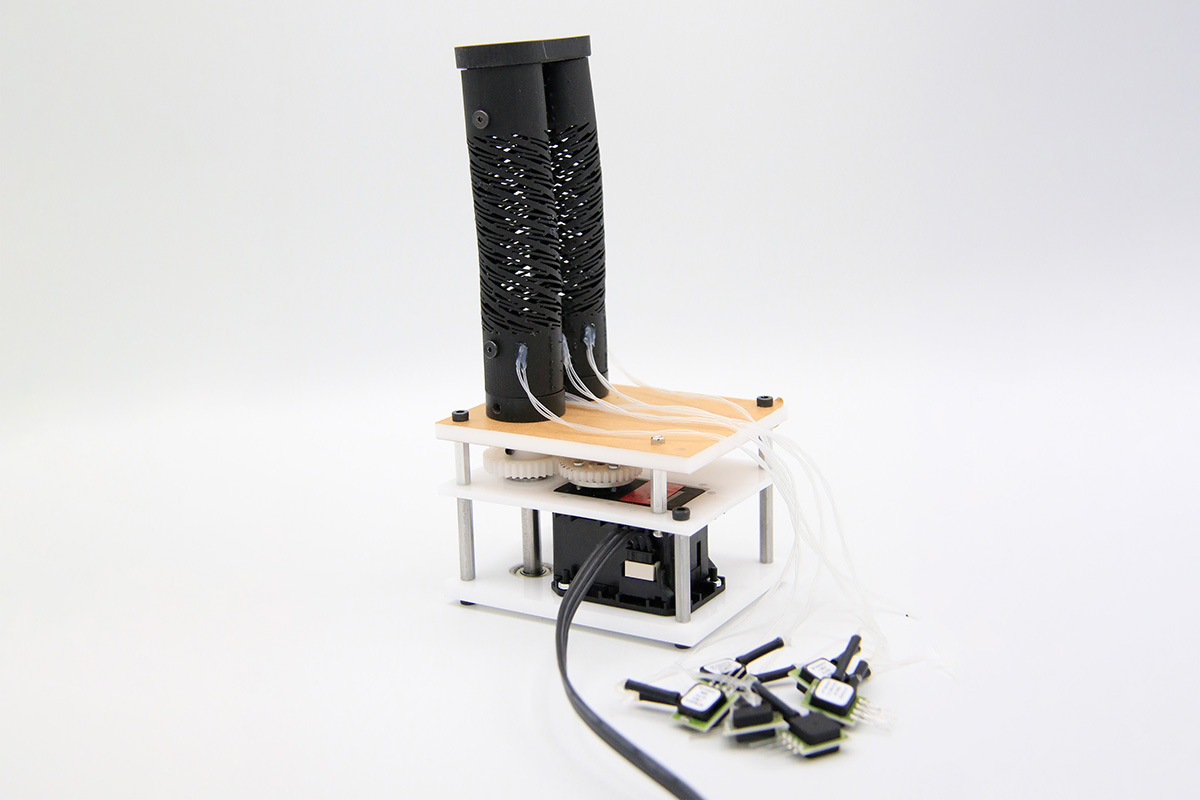 This image shows a soft robotic finger made from two cylinders comprised of a new class of materials known as handed shearing auxetics (HSAs), which bend and rotate. Air-filled channels embedded within the HSA structure connect to pressure sensors (pile of chips in the foreground), which actively measure the pressure change of these "fluidic sensors." Image courtesy of the researchers.

The researchers 3D printed an HSA soft robot capable of several movements, including bending, twisting, and elongating. They ran the robot through a series of movements for more than 18 hours and used the sensor data to train a neural network that could accurately predict the robot’s motion.

"Materials scientists have been working hard to optimize architected materials for functionality. This seems like a simple, yet really powerful idea to connect what those researchers have been doing with this realm of perception. As soon as we add sensing, then roboticists like me can come in and use this as an active material, not just a passive one," she added.

"Sensorizing soft robots with continuous skin-like sensors has been an open challenge in the field. This new method provides accurate proprioceptive capabilities for soft robots and opens the door for exploring the world through touch," said senior author Daniela Rus.

MIT's statement reads, "in the future, the researchers look forward to finding new applications for this technique, such as creating novel human-machine interfaces or soft devices that have sensing capabilities within the internal structure."

"Chin is also interested in utilizing machine learning to push the boundaries of tactile sensing for robotics."

Joining Chin on the paper are co-lead author Ryan Truby, a former CSAIL postdoc who is now as assistant professor at Northwestern University; Annan Zhang, a CSAIL graduate student; and senior author Daniela Rus, the Andrew and Erna Viterbi Professor of Electrical Engineering and Computer Science and director of CSAIL.

The paper is published in Science Advances.

Earlier this year, MIT researchers developed a new composite material that is tough as bone and hard as aluminum. They also created a new lightweight material that is stronger than steel and light as plastic.

Top image: This image shows 3D-printed crystalline lattice structures with air-filled channels, known as "fluidic sensors," embedded into the structures (the indents on the middle of lattices are the outlet holes of the sensors.) These air channels let the researchers measure how much force the lattices experience when they are compressed or flattened. Image courtesy of the researchers, edited by MIT News.