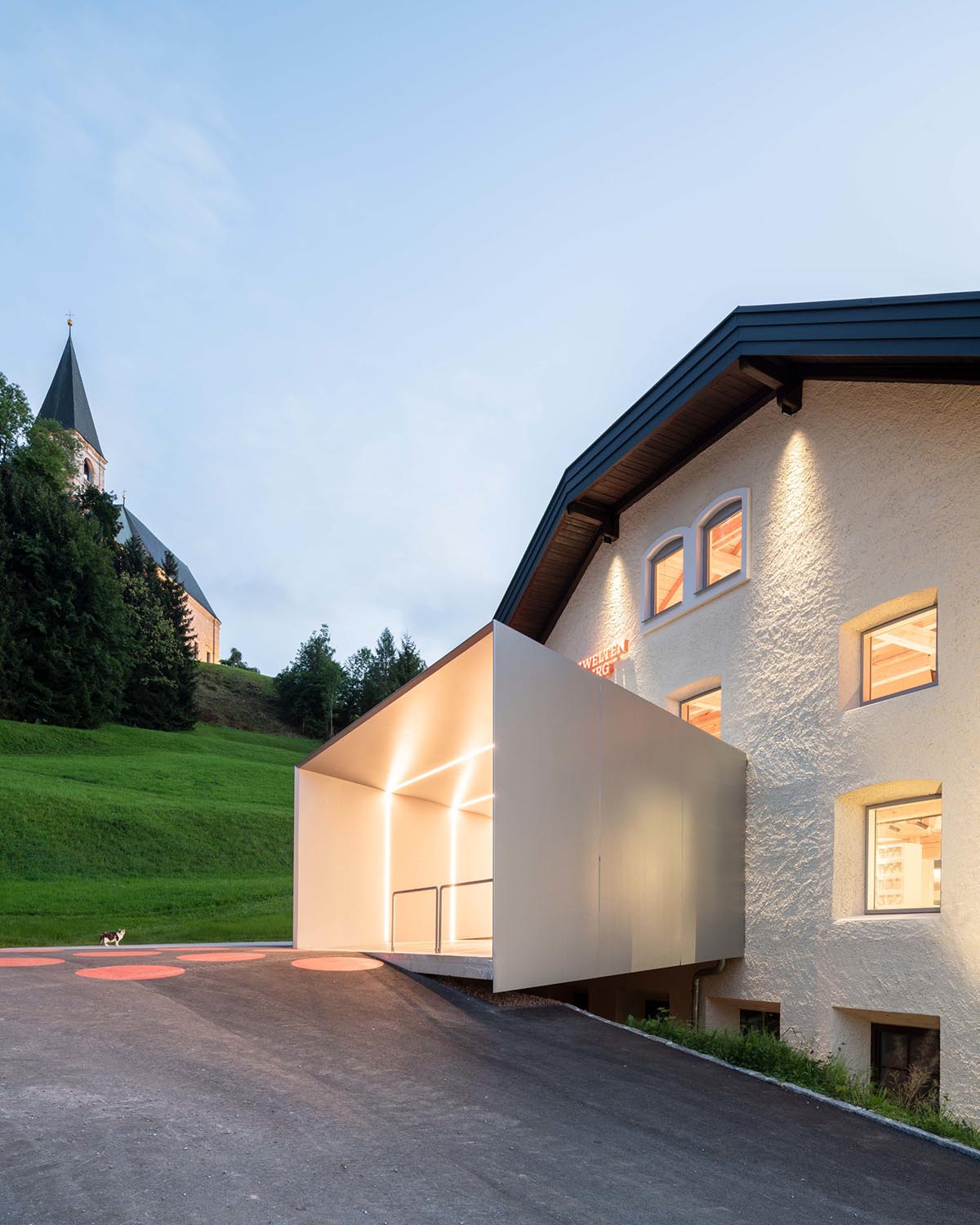 Vienna-based architecture studio the next ENTERprise Architects has completed the remodelling of Salzwelten Salzburg, Austria which is probably the first salt mine in the world to open its tunnels to the public creates a new and contemporary experience for visitors.

Named Salzwelten Salzburg, the team developed a holistic approach that consists of extensive renovation work, with a series of conversions and additions and designed a completely new visitor circulation system which was completed within just 18 months of the signing of the contract despite the disruptions in the design and construction process caused by the pandemic, according to studio. Salzwelten Salzburg, a popular cultural attraction that has been open to the public since 1568 and welcomes more than 200,000 visitors a year, was ready for a redesign and re-organisation.

The small-scale additions and modifications to the ensemble of buildings that had been carried out over decades had resulted in confusing logistics and poor visitor circulation. As a result of a dialogue process, the renowned architectural office the next ENTERprise Architects was selected to develop a new and comprehensive overall concept.

The project for the reinterpretation of Salzwelten Salzburg was submitted in March 2020 and, over the course of the following months, realised according to schedule.

The redesign and reinterpretation of Salzwelten Salzburg was realised by the next ENTERprise Architects together with Sabine Dreher of Liquid Frontiers and Matthias Hosp of ARTFABRIK. Remodelling work “Ober Tage” (above ground) focussed on natural orientation, the imple¬mentation of state-of-the-art services and the optimisation of flows, all with the objective of increasing visitor traffic and reinforcing the atmospheric qualities. The incorporation of new displays invites visitors with time on their hands to wander around the complex at their leisure.

Connecting elements, including a new, uniform canopy with signage and generous openings and extensions, sensitively combined the existing buildings into a coherent whole. The characteristic heterogeneity of Salzwelten Salzburg, which has developed over many years, was enhanced by contemporary elements and woven together into a convincing and impressive overall ensemble. The individual sections of the tour as a “series of islands”

Welcomed by the covered info terminal next to the car park, visitors enter the new multifunctional visitor centre through the funnel-shaped entrance, which can be seen from far and wide and draws on the industrial character of the mine. The historic existing building was liberated from later additions, small openings were made in the façade and the impressive timber structure was laid bare, right up to the roof.

The interior, which is now generous and airy, contains the centrally located infodesk, with its ticketing, lounge and infrastructure, and a series of display cases, info walls and a huge 3D model of the Bad Dürrnberg salt mine, which offers visitors an atmospheric introduction to their tour below ground. Equipped with a ticket and some information one then steps out onto the new outdoor plaza, which has a canopy of coloured glass and acts as both a meeting point and distributing element.

From here, one can head in two directions: to the building that forms the entrance to the mine, with its tour-start, bistro and shop or to the open-air museum, the Celtic Mountain, with its associated Salt Manufactory and children’s playground. The Celtic Village can already be seen from the new plaza and floor markings indicate the barrier-free access route. A second route crosses a bridge and enters the so-called historic mine entrance building, with its new bistro and distant views. This is where visitors gather to start their booked tour.

The tour starts “Ober Tage” with an introductory film in a specially designed and built preview room. After putting on the necessary protective clothing in the cloakroom, with its lockers and comfortable seating, guests are ready for the tour of the show mine “Unter-Ta- ge” (below ground). Following the tour and the return of the protective clothing, the visitors leave via the newly adapted and enlarged shop, fortify themselves in the comfortable bistro with its splendid views or continue further to the Celtic Mountain with its playground.

Conceived as a “series of islands”, these separate, new sections of Salzwelten Salzburg not only improve the visitor experience and orientation, but also offer a broad range of information, cuisine and opportunities to relax. In formal terms, the remodelling draws on the engineering architecture of the mining industry. For example, the funnel-shaped entrance to the visitor centre is inspired by the method used for building shafts, while the limed timber beams lend the existing building a sense of elegant solidity and lightness.

The choice of materials and colours is based on the crystalline and orange-coloured character of the blocks of salt as well as the galleries and industrial buildings of the mine, with their steel structures and wooden planks. This palette continues throughout the visitor areas, creating an inspiring atmosphere for the guests before they enter the galleries. Between a cabinet of curiosities, a mine train and an underground salt lake

The show mine “Unter Tage” was conceived by a team led by Sabine Dreher from the office Liquid Frontiers and newly presented in cooperation with the media producers ARTFABRIK.

Taking into account the educational mission of the neighbouring Hallstatt UNESCO World Heritage Site, a concept was developed that tells the story of the world’s oldest show mine with integrity and authenticity without losing sight of the need to entertain. This journey through time involves a ride on a mine train, two slides and a raft trip across the underground salt lake. The reduced, modern aesthetic of the exhibition chambers, with their specially developed lighting concept and impressively presented salt sculptures, offers a state-of-the-art adventure for visitors and ensures that Salzwelten Salzburg provides a unique experience. the next ENTERprise Architects were founded by Marie-Therese Harnoncourt and Ernst J. Fuchs in Vienna in 2000. tnE Architects won the Hans Hollein Art Prize in 2018.

Wolkenturm Open-Air Stage in Austria, Wolkenturm (Engl. "Cloud Tower") in Austria are among the studio's key projects. tne Architects are currently responsible for the construction of the Heidi Horten Museum in Vienna, which is scheduled to open in spring 2022.

General planner above ground: the next ENTERprise architects