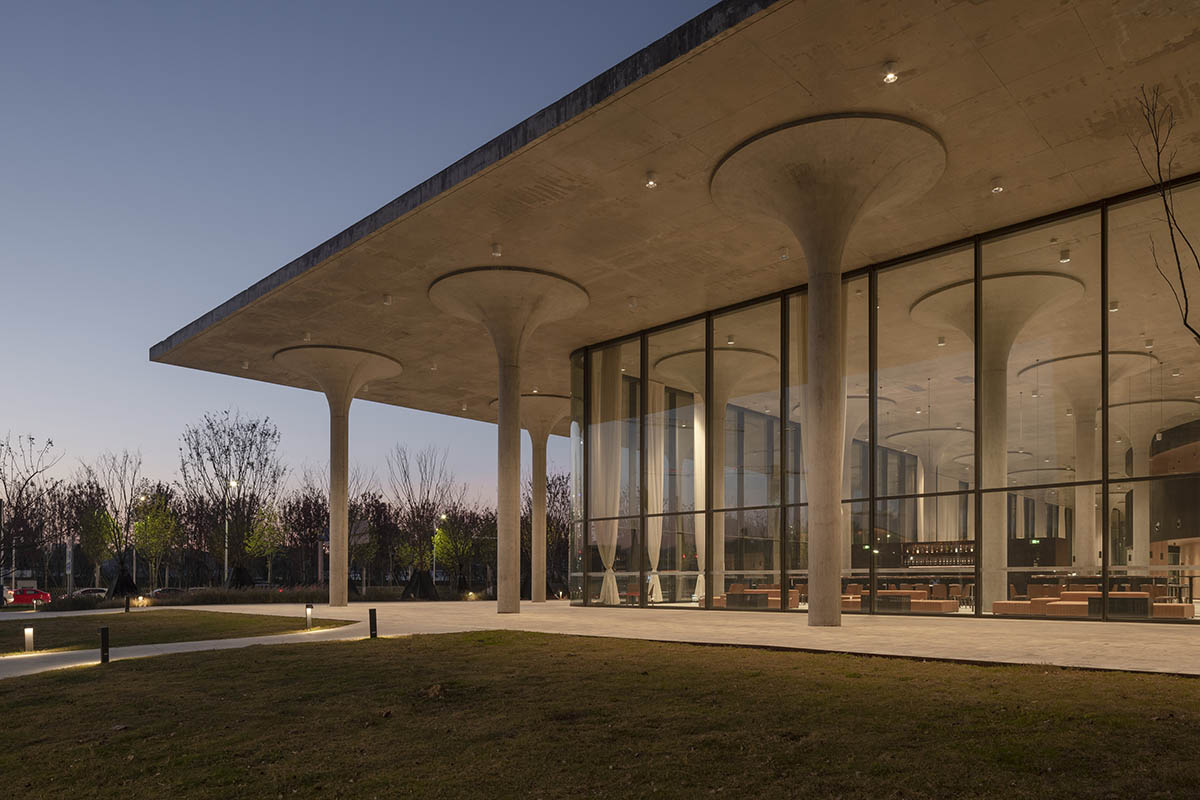 David Chipperfield Architects has designed a theatre and a hotel in Jingdezhen, China, which was completed as part of Ceramic Art Avenue Taoxichuan Masterplan covering a site where large factory buildings take place for the local porcelain production.

The masterplan was not only aiming to preserve and convert the existing buildings for re-use, but also was intending to complement the urban quarter with new buildings to gain a contemporary presence as part of the broader city context. 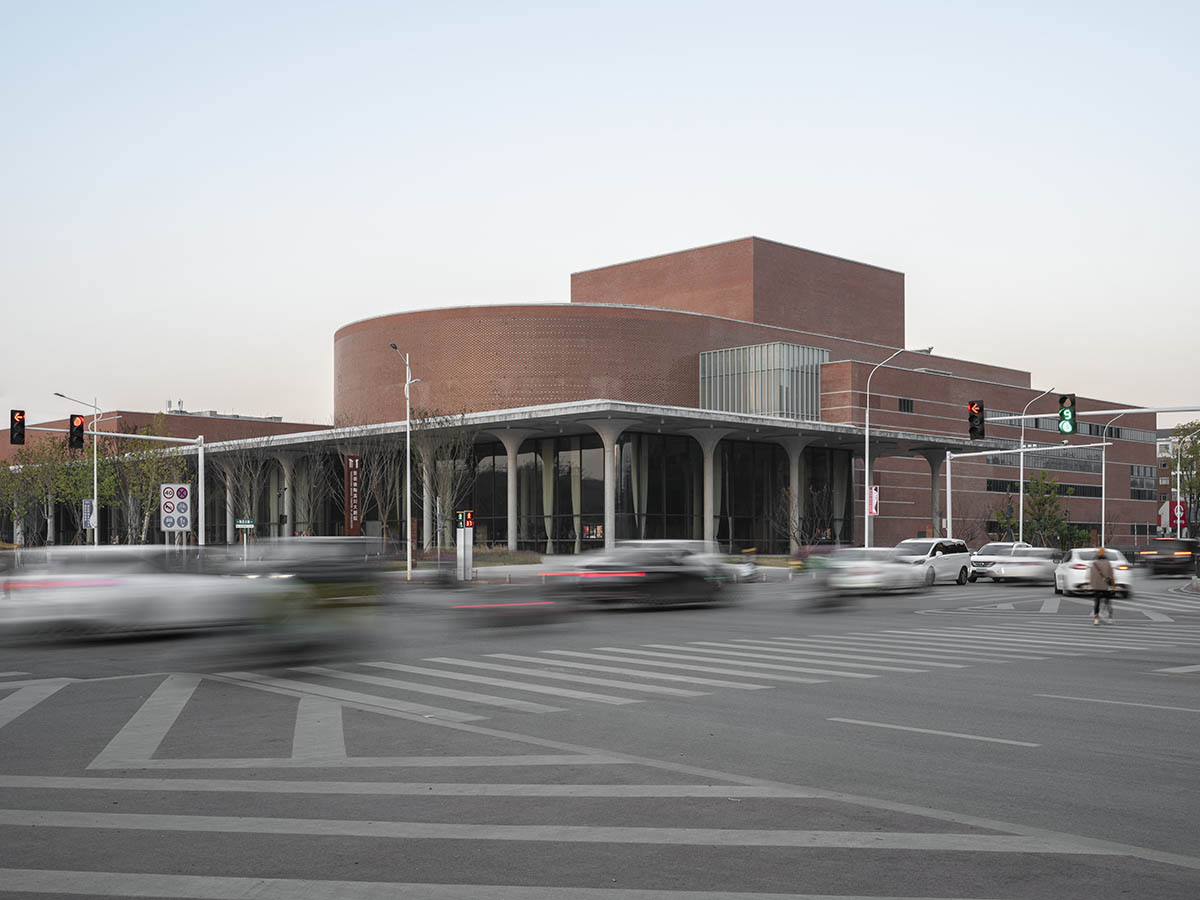 The 265,000-square-metre masterplan has been developing in stages. In a first project phase, the existing buildings in the western part of the site were refurbished and developed to become a lively and public place within the urban fabric.

A theatre on thee north, a hotel complex, consisting of four separate buildings, and a library building on the south were now completed as new city landmarks of the campus. 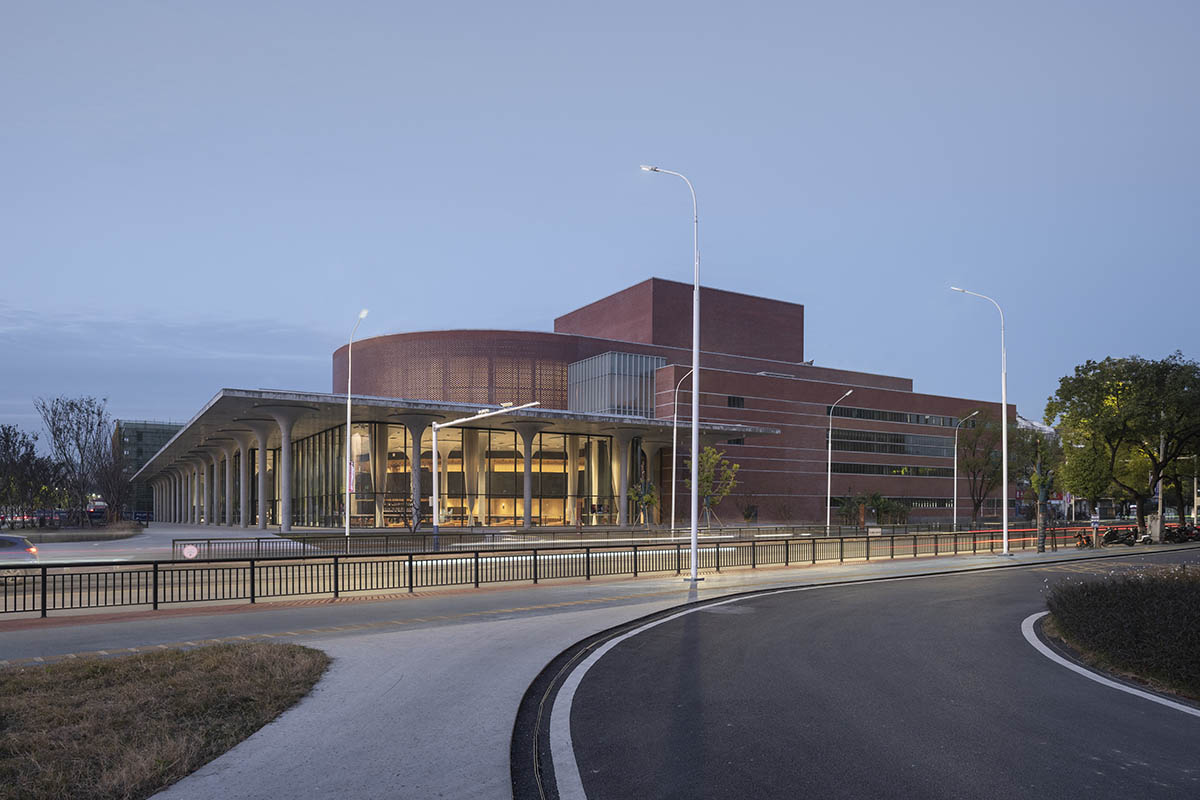 While old buildings have already been repurposed with new functions such as a museum, porcelain shops and a ceramics market, the new design of the buildings addresses a connection to the site's industrial past.

In a second project phase, the eastern site is transformed into a campus for the performing arts with colleges, performance venues and further infrastructure.

Visitors are guided via a pedestrian promenade leading through the centre of the former production site and a boulevard to its west open up the area in north-south direction. 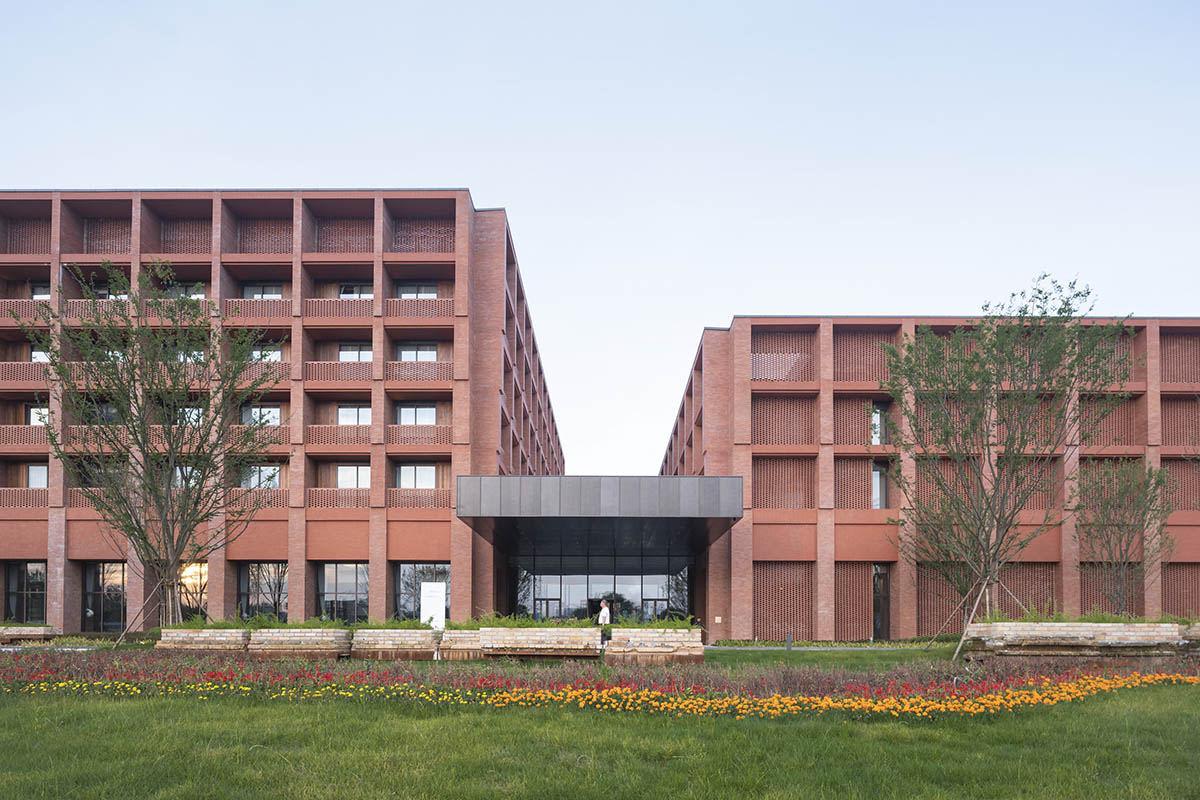 Along the boulevard, visitors encounter new completed public buildings including a Grand Theatre with two venues on the north and a hotel complex and library on the south.

David Chipperfield Architects is also designing a Music Academy - set to be completed in 2022 - at the heart of the campus, which will complement the newly realized buildings.

In addition to these public uses, shops and residential buildings are also provided, including student accommodation. 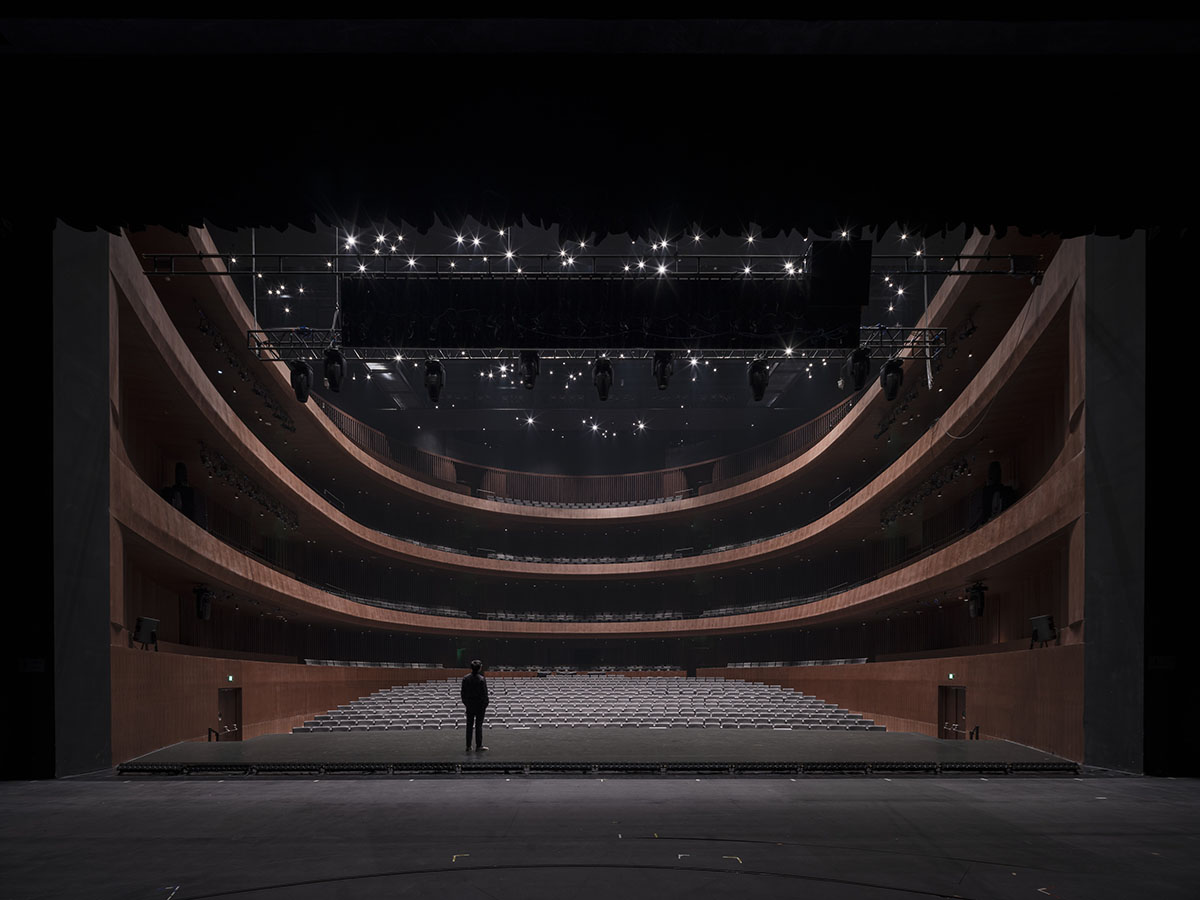 "The public character of the inner-city campus is primarily generated by opening the ground levels of the factory buildings to the general public, extending the public outdoor space into the interior," said David Chipperfield Architects.

"Due to their physical presence and historic relevance for the local porcelain production, the existing industrial buildings give identity and meaning to this area."

"Their preservation and continued use are therefore essential for the whole master plan," the firm added. 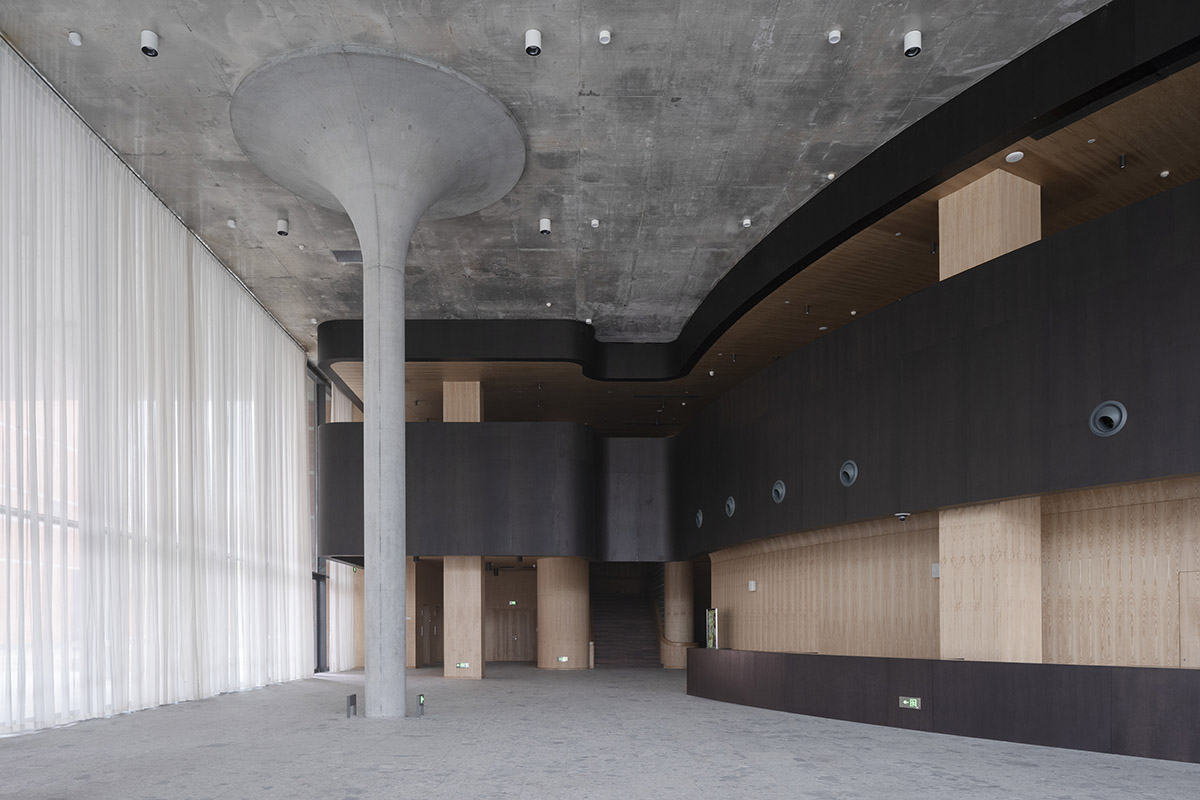 The main public facilities of the new cultural quarter of Jingdezhen are located on a boulevard on the western side of the area.

The northern end is marked by the Grand Theatre, which was built with a new brick construction, referring to the traditional materiality of the historic industrial buildings. The Grand Theatre houses two venues: a classical opera house and a black box theatre.

The auditorium of the opera house is fully lined with walnut veneer and holds 1200 seats. The interior is designed like horseshoe-shaped with three balconies. 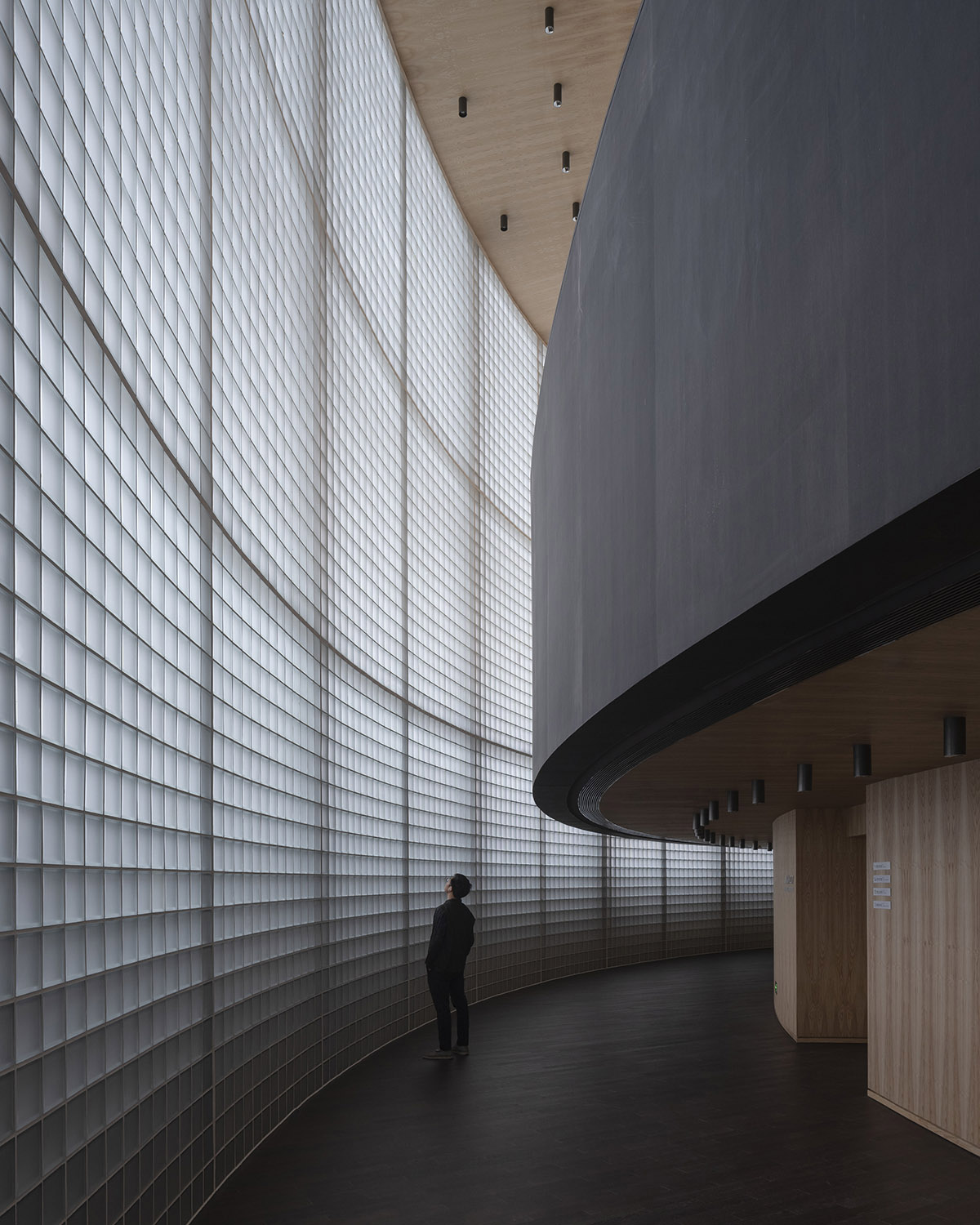 Based on this classical European format, the auditorium promotes the meaningful connectedness of audience and performers as one community who jointly experience an artistic performance as a singular, authentic live event as opposed to today’s digital environment.

The black box theatre, lined in black wood, allows for various contemporary performance settings due to its flexible and mobile stage area. In addition, the black box theatre can be opened to the outside space - allowing for open-air concerts to be held on the campus.

The roof of the foyer is supported by mushroom-shaped columns

While both venues of the Grand Theatre can be accessed at ground level via a spacious foyer, the foyer is opened up towards the boulevard. The horseshoe-shaped auditorium of the opera projects into the foyer where it is enclosed by a timber clad cloaks area and a gallery above.

The in-situ concrete architecture of the large-scale foyer roof is supported by mushroom-shaped columns and the foyer creates a continuous transition from the trees of the boulevard into the interior of the Grand Theatre. 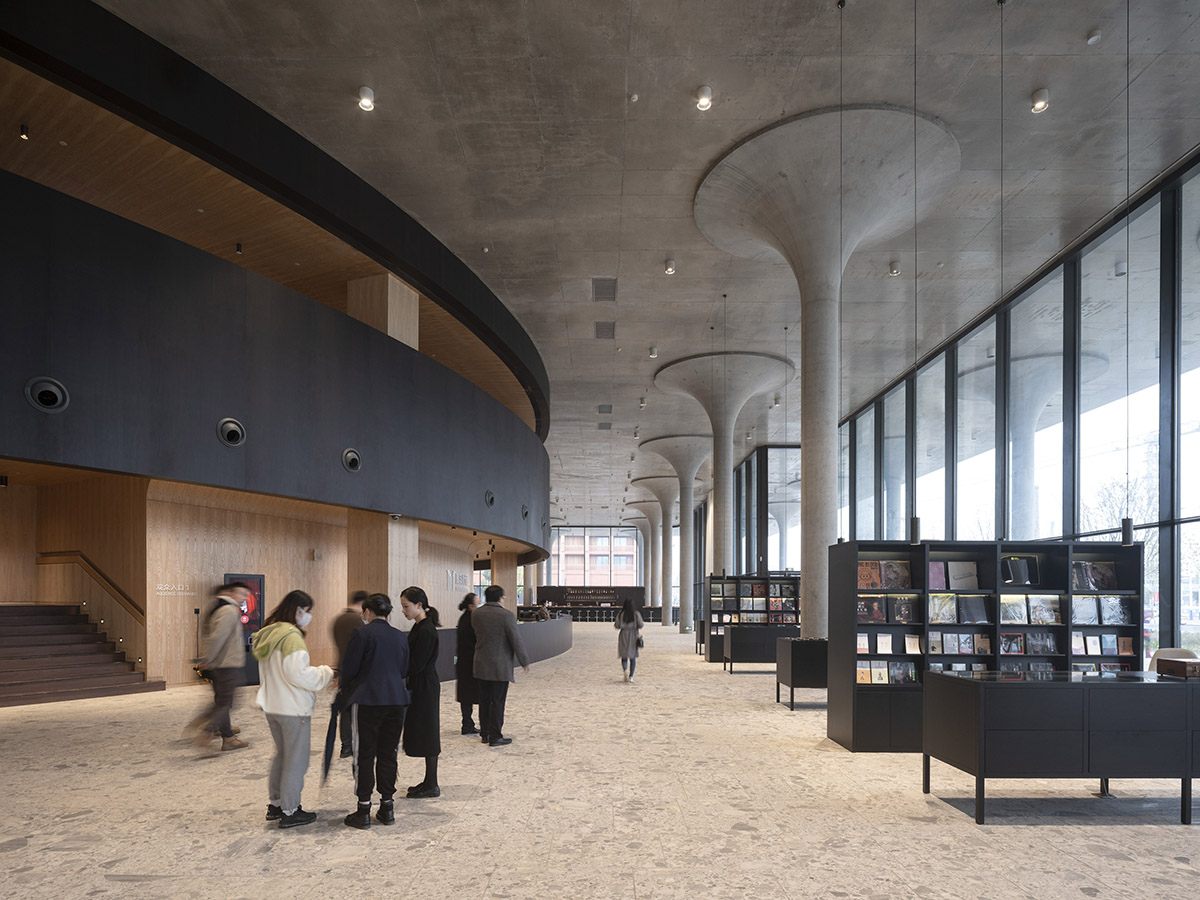 The studio used natural stone on the floor that connects interior and exterior space further. Thanks to the curved auditorium, it also emerges externally as a perforated brick volume above the foyer roof, shining like a crown of light at night and lending landmark character to the new venue.

The Grand Theatre encompasses a total of 42,400 square meters.

The Hotel complex is located between the Grand Theatre and the Academy of Music, the hotel complex is situated at the centre of Jingdezhen‘s new cultural district.

The hotel complex comprises four separate buildings with a four-star hotel, a five-star hotel and an events venue. The studio uses a spacious light steel structure to connect the buildings at ground level creating communal areas for various public activities. 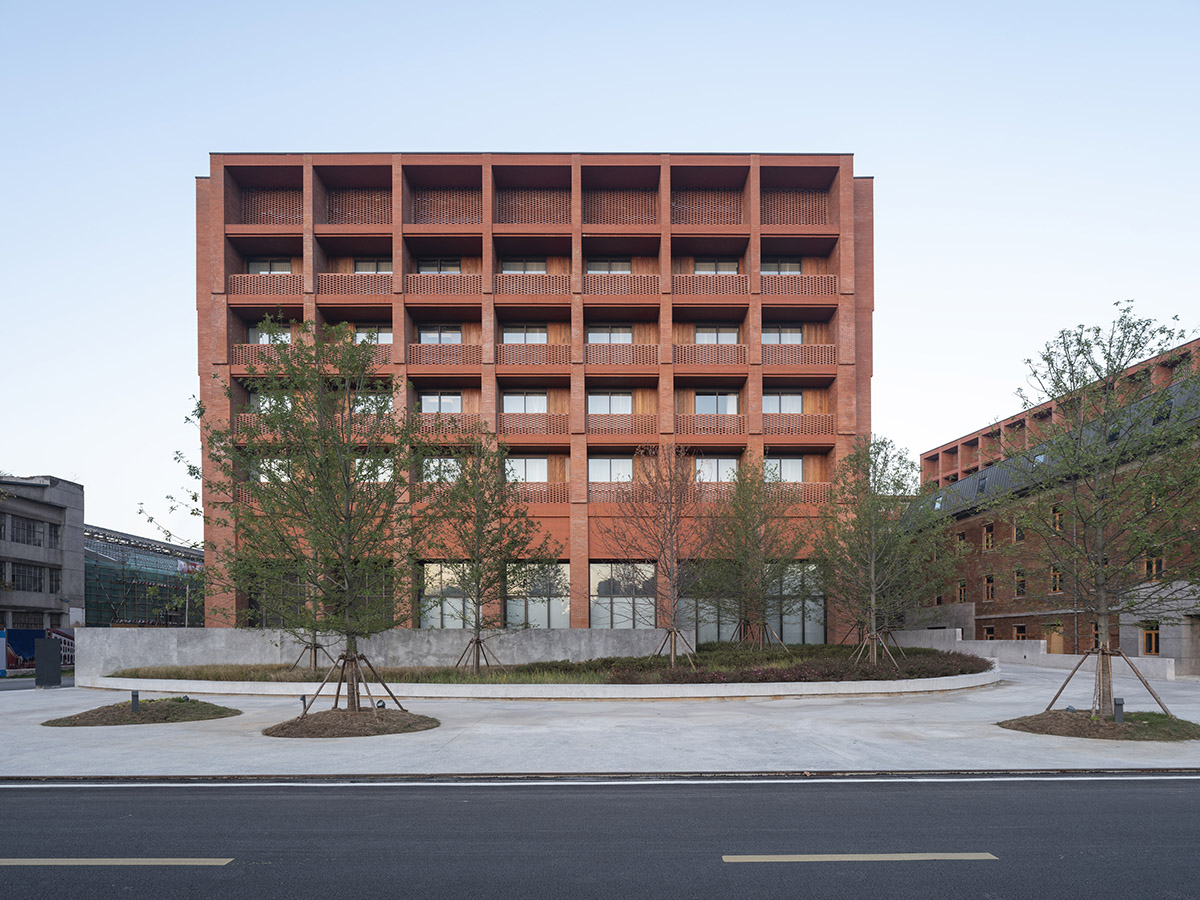 Each of the hotel buildings has an inner courtyard and offers an individually-landscaped garden, which can be seen from each of the adjoining hotel corridors via a perforated brick wall, conveying a sense of belonging, tranquility and orientation.

The more southerly of the two buildings directly adjoining the boulevard holds prestigious function rooms for a diverse range of public events. A former dormitory building from the 1960s was preserved and integrated into the complex to complement the hotel as an apartment building. 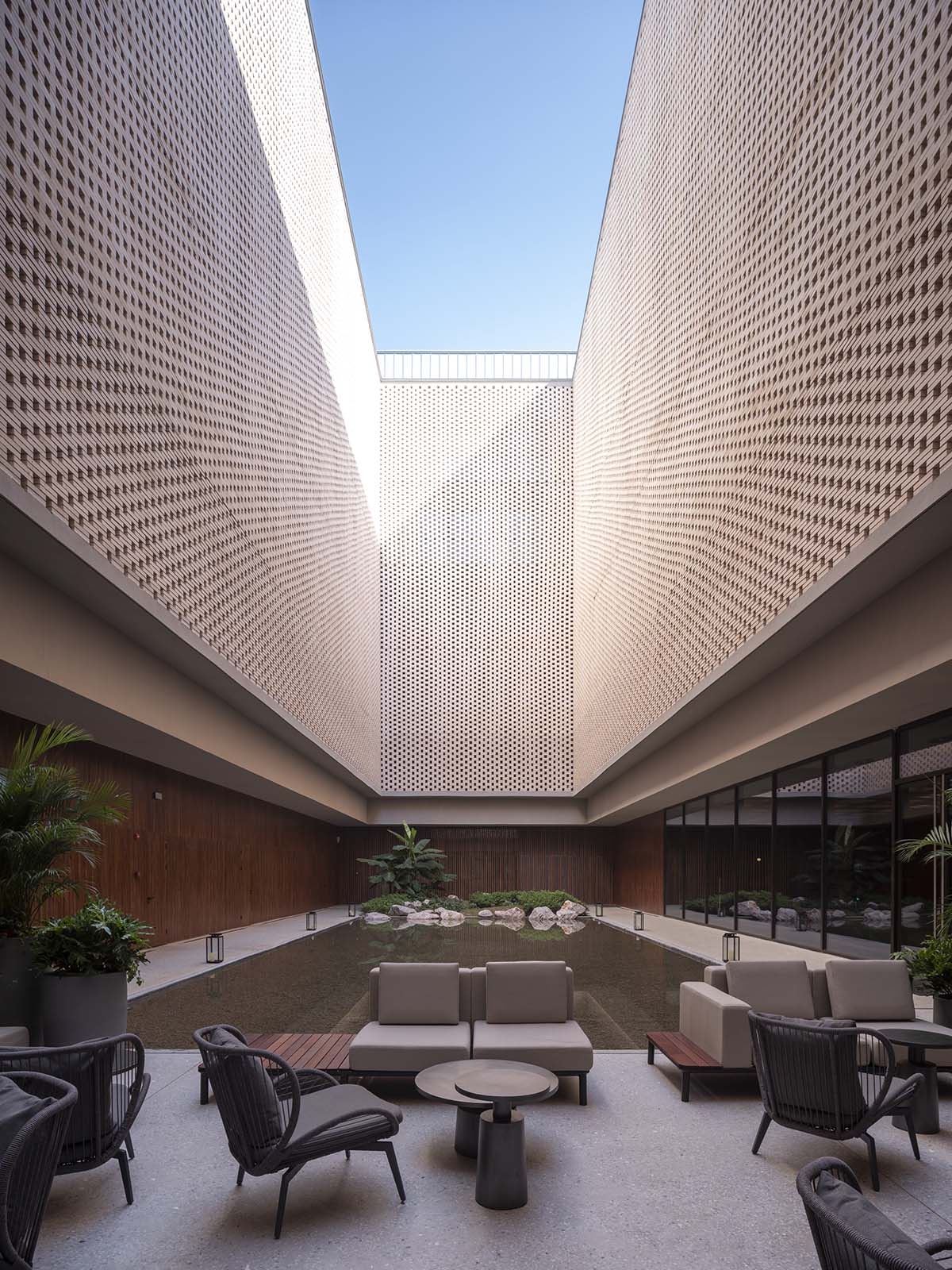 For the outer language of the hotel buildings, the studio takes cues from the historic factory buildings: they preferred to use bricks as the materials are primarily used as the local building material for the hotel façades, which thus blend seamlessly into the surrounding area. 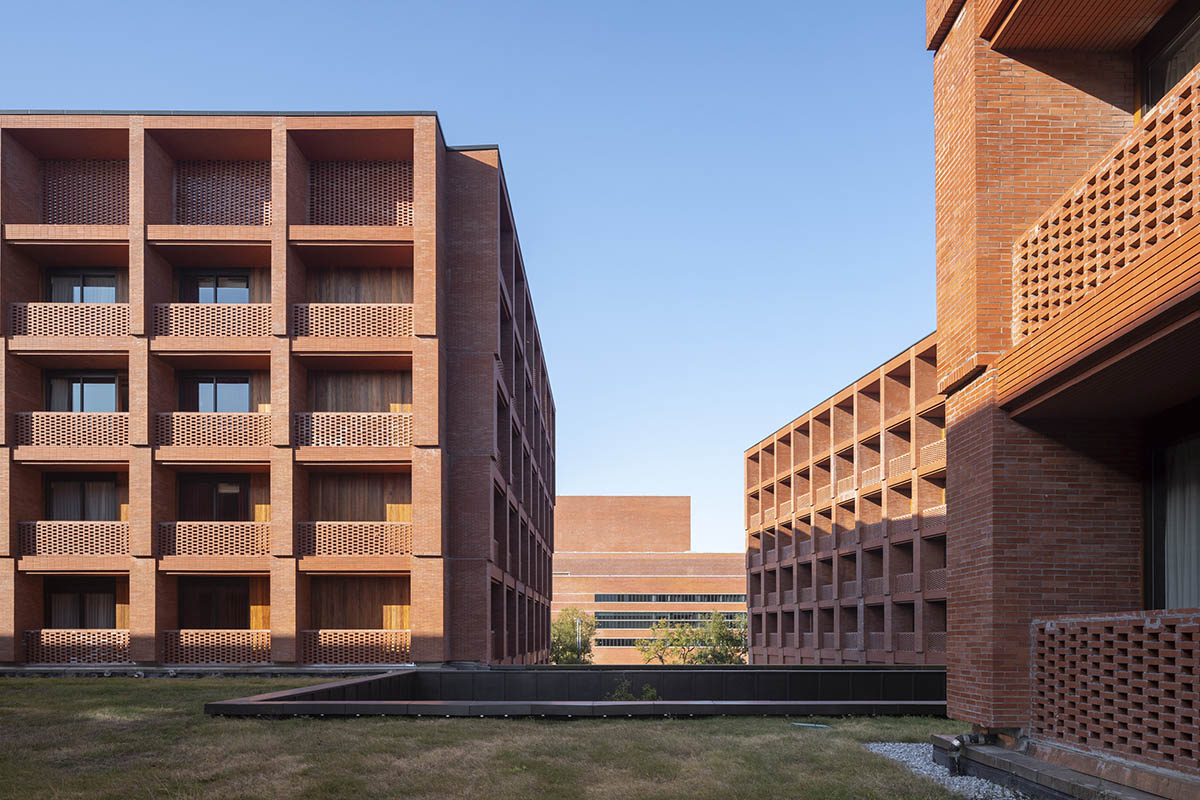 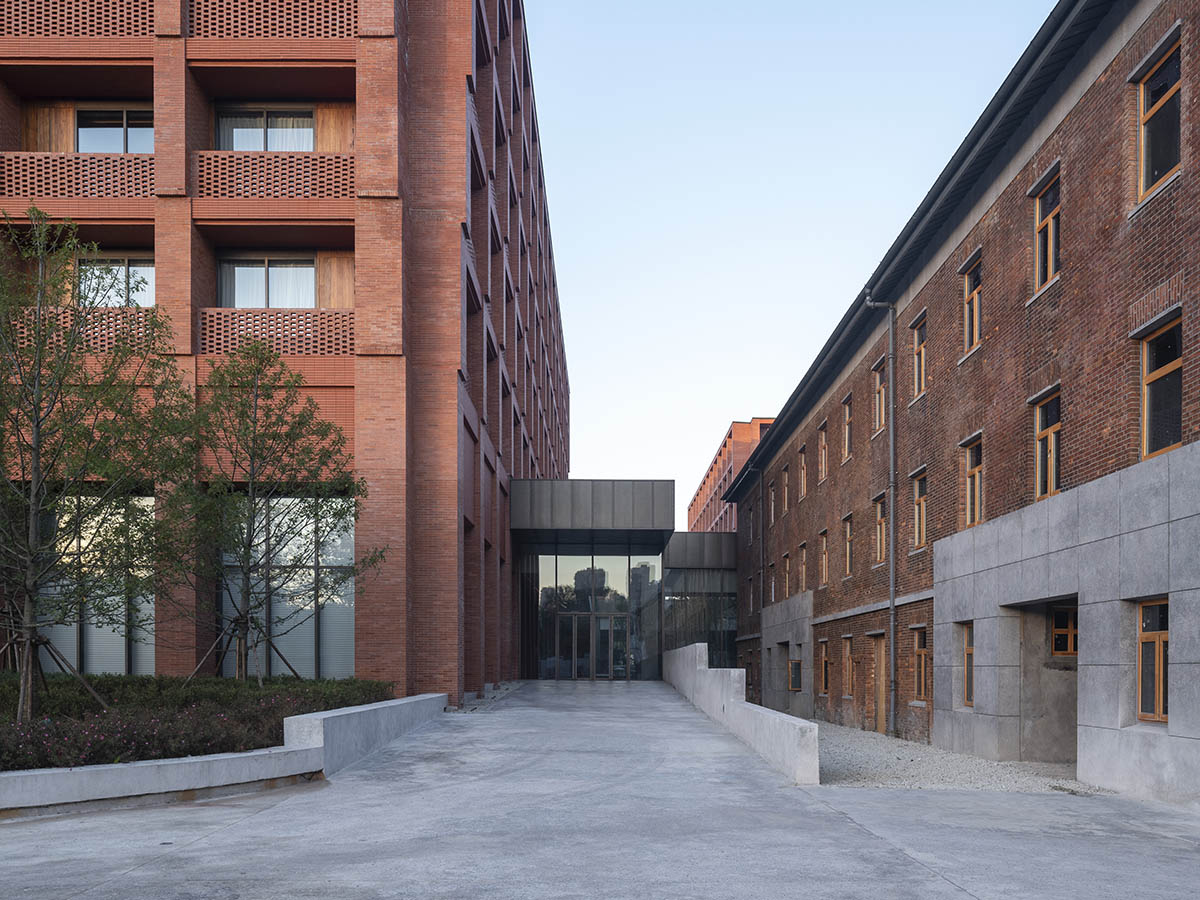 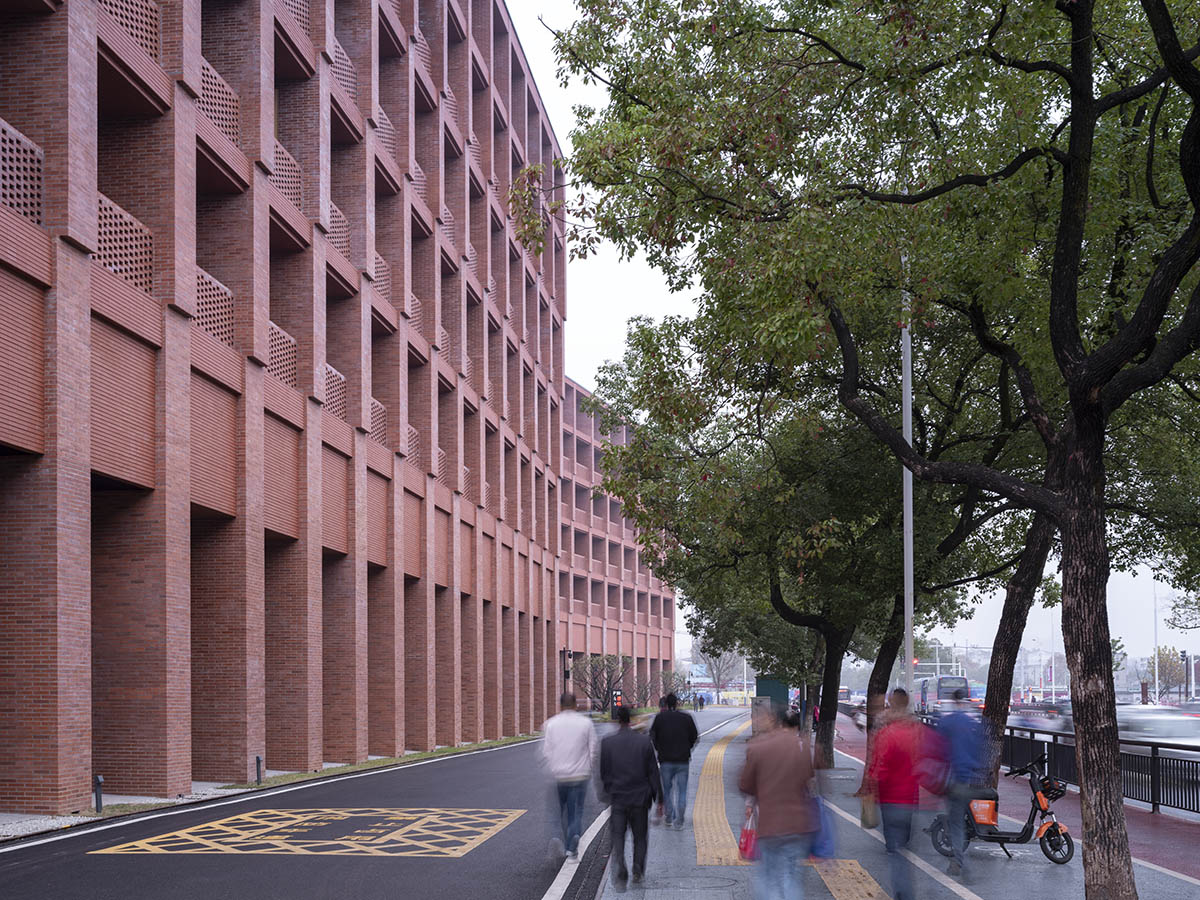 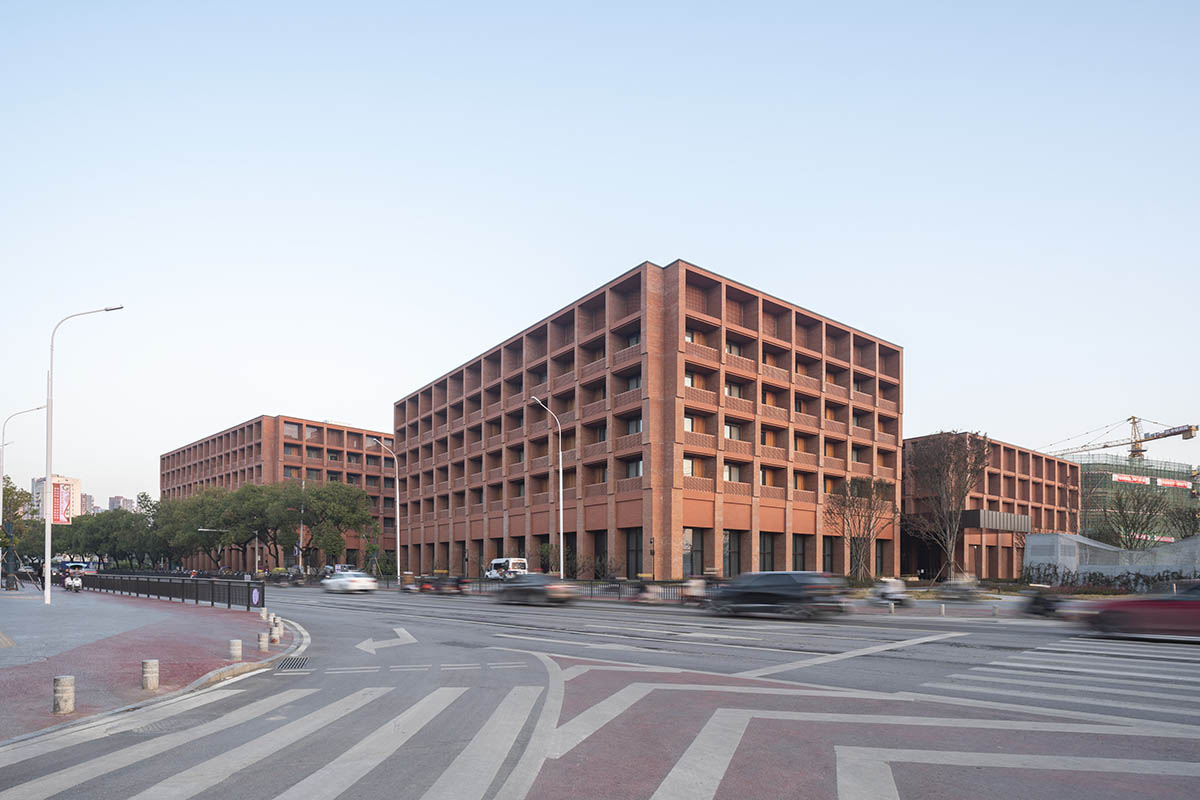 The semi-transparent façades of the function rooms and the perforated balustrades of the hotel balconies act as a filter between private and public areas. The staggered brick columns bring the overall building volume in relation to the human scale.

The Hotel Complex encompasses a total of 91,700 square meters. 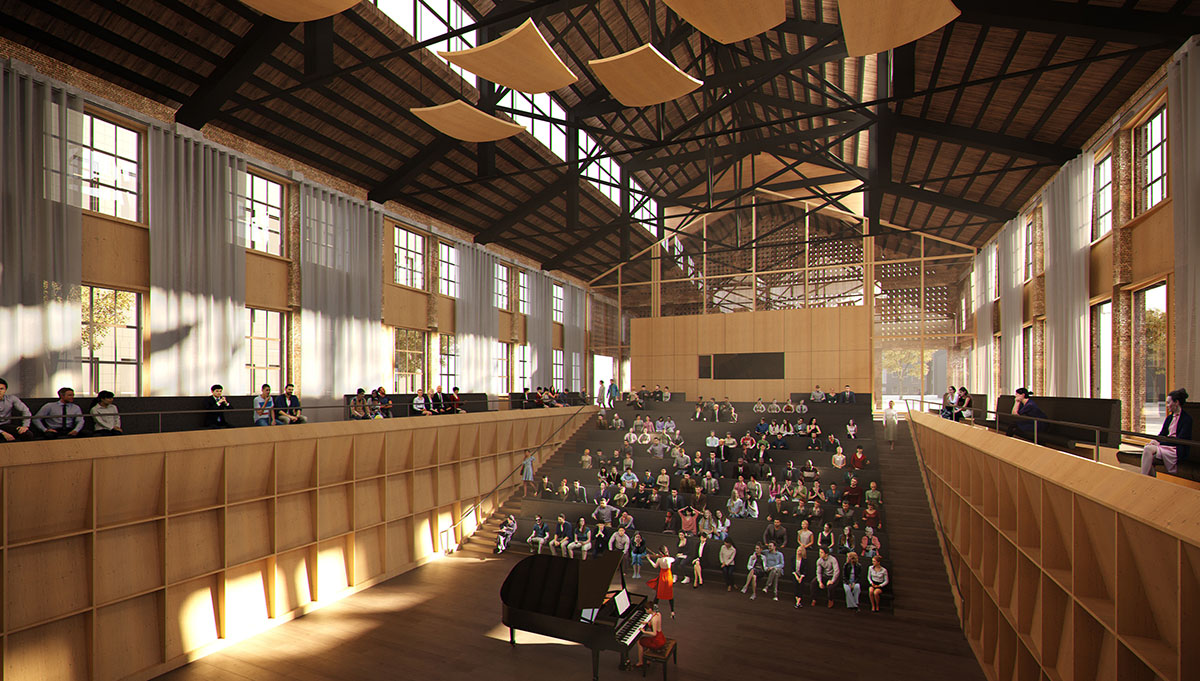 David Chipperfield Architects will add another cultural component to the masterplan: Academy of Music - which will be built at the southern end of the campus boulevard, the music academy will form a lively place at the heart of Jingdezhen‘s new cultural district.

Set to be completed in 2022, the Academy of Music is housed in two former factory buildings from the mid-20th century that were once used for ceramics production. The studio is redesigning two brick buildings and upgrading for their new use.

Academy of Music will contain a 350-seat concert hall, an airy foyer at the centre of the large building, recording studios and technical rooms. The material palette includes a maple veneer, pine wood and mastic asphalt. These materilas are aimed to enhance the industrial appearance of the historic buildings.

Academy of Music encompasses a total of 8,300 square meters. 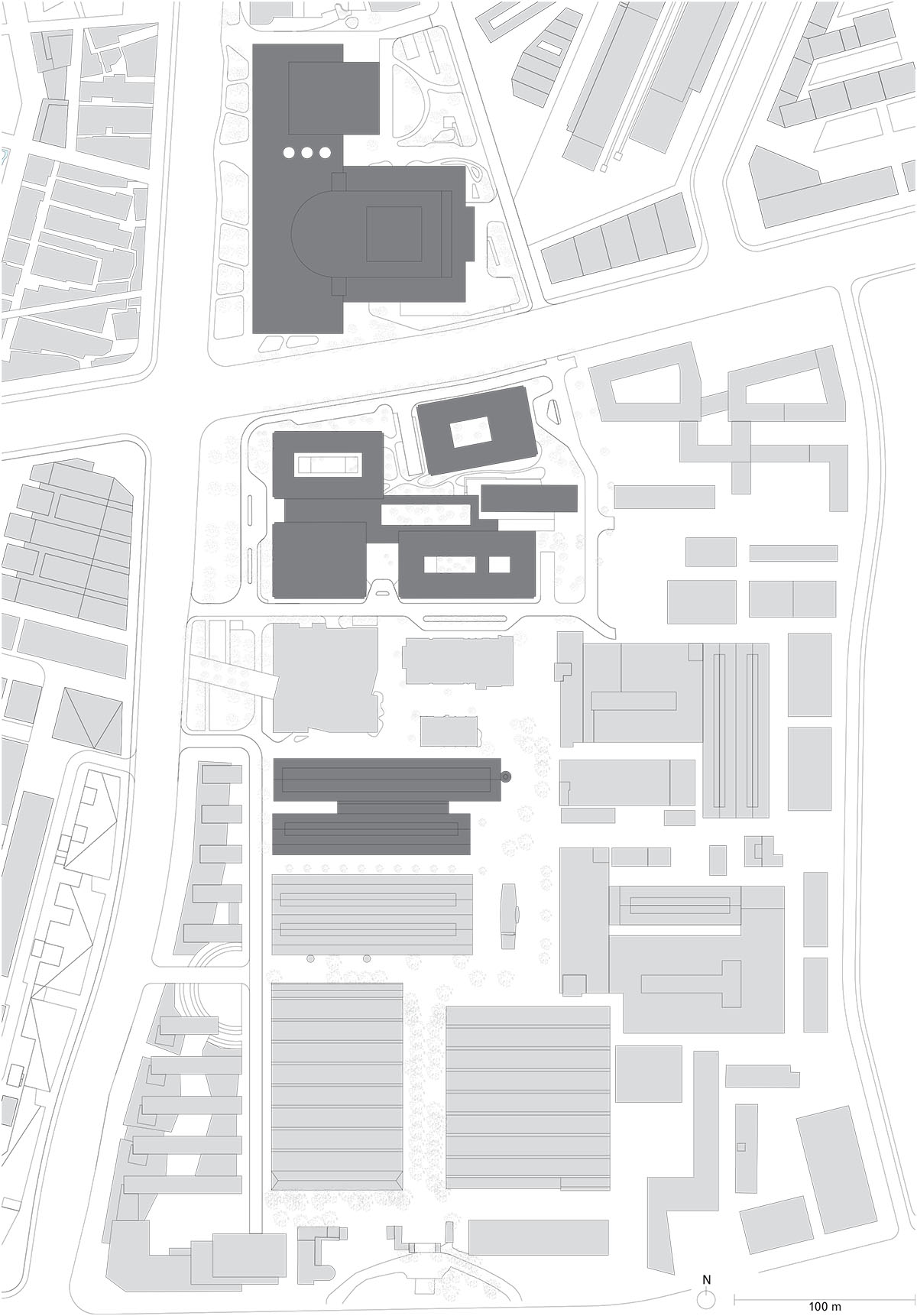 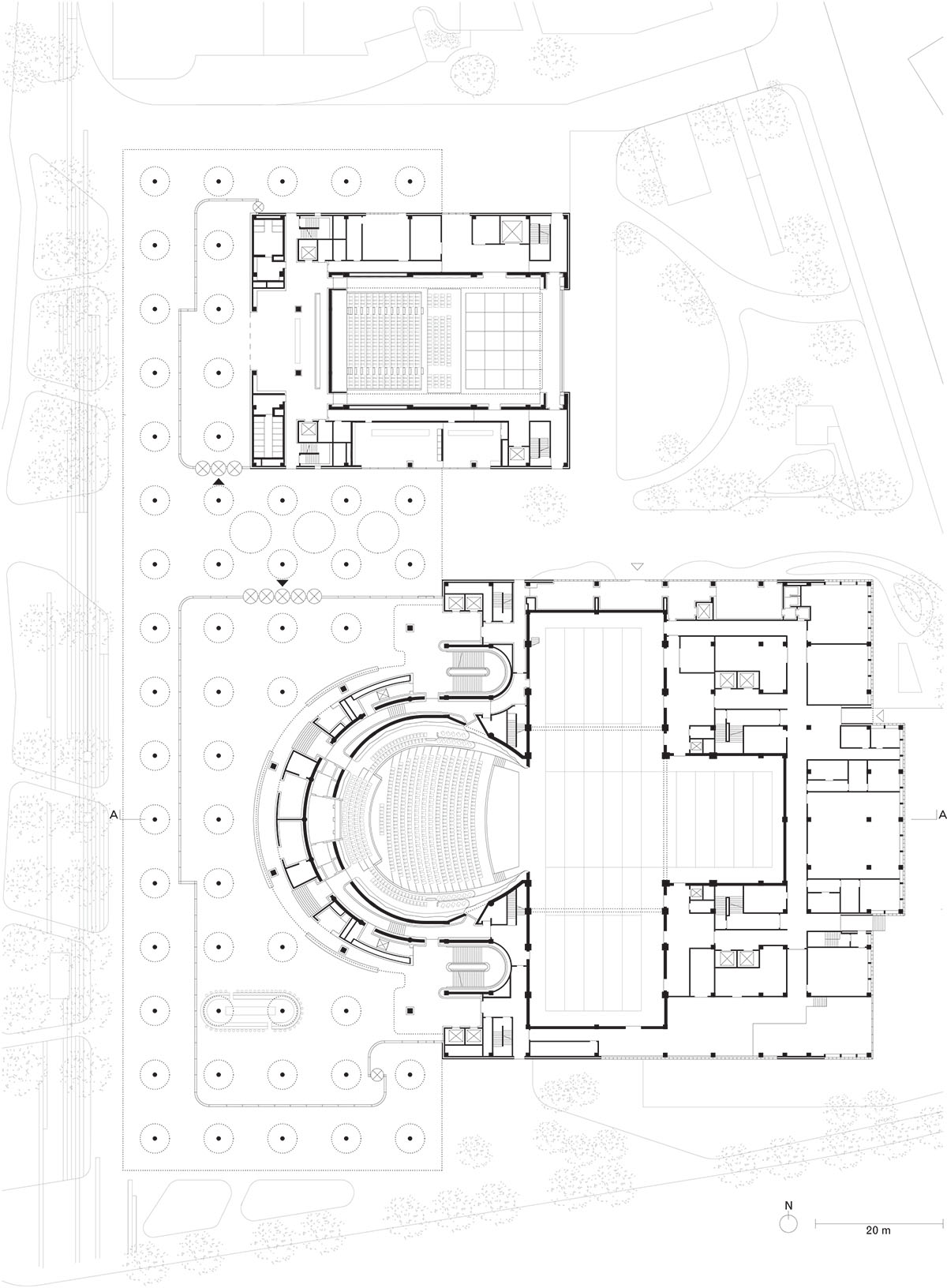 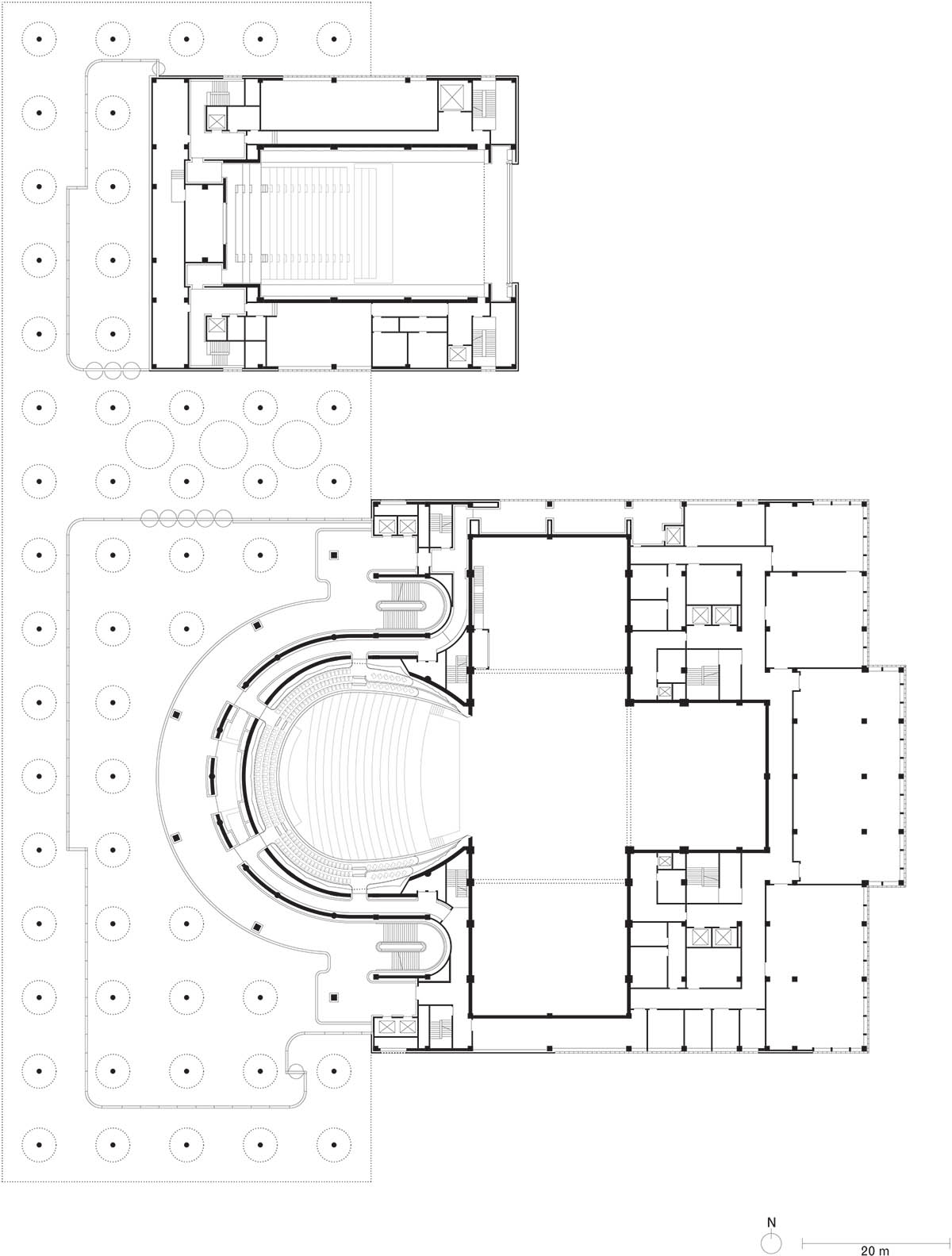 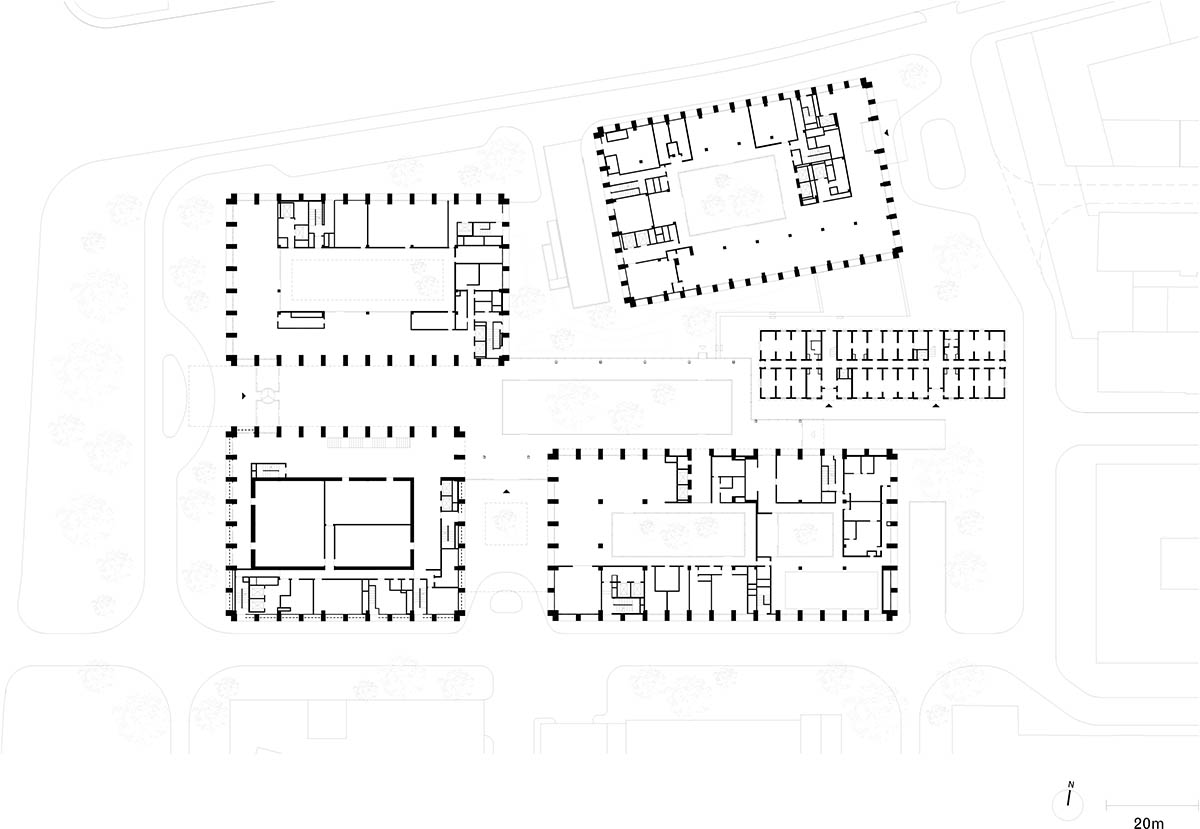 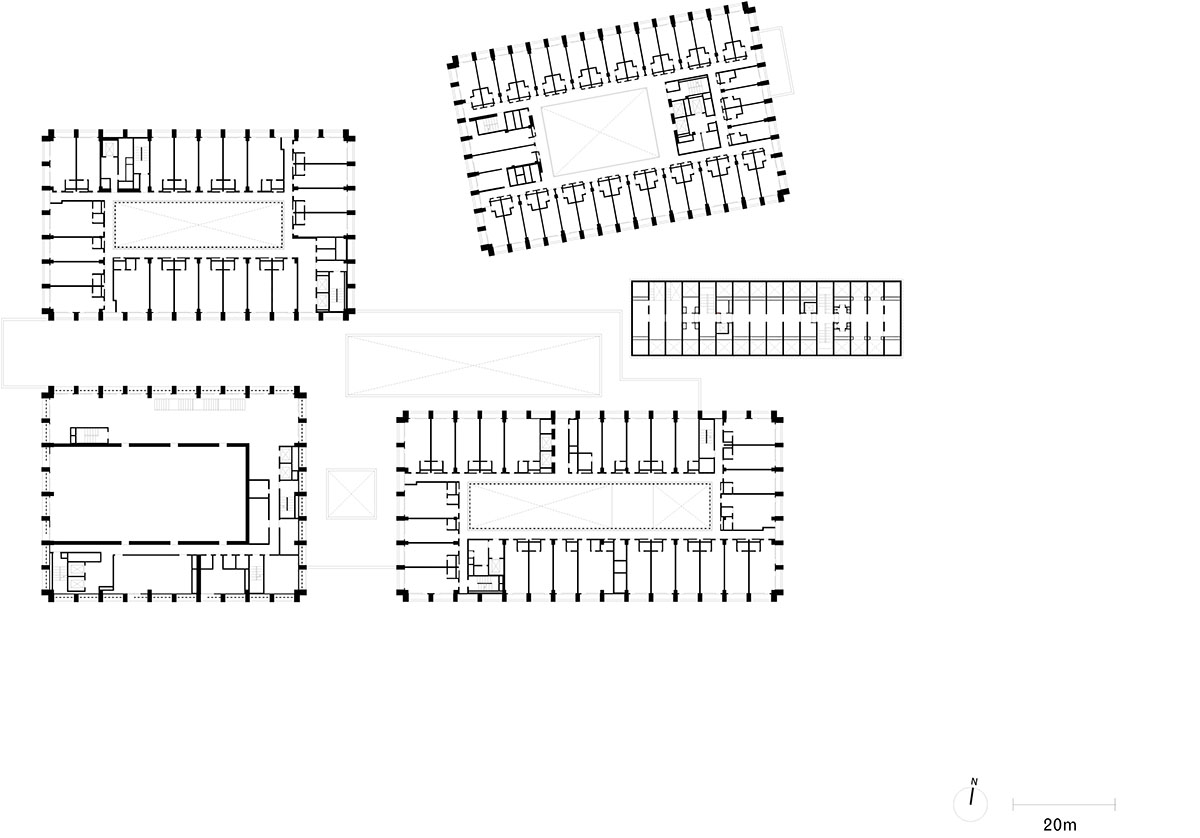 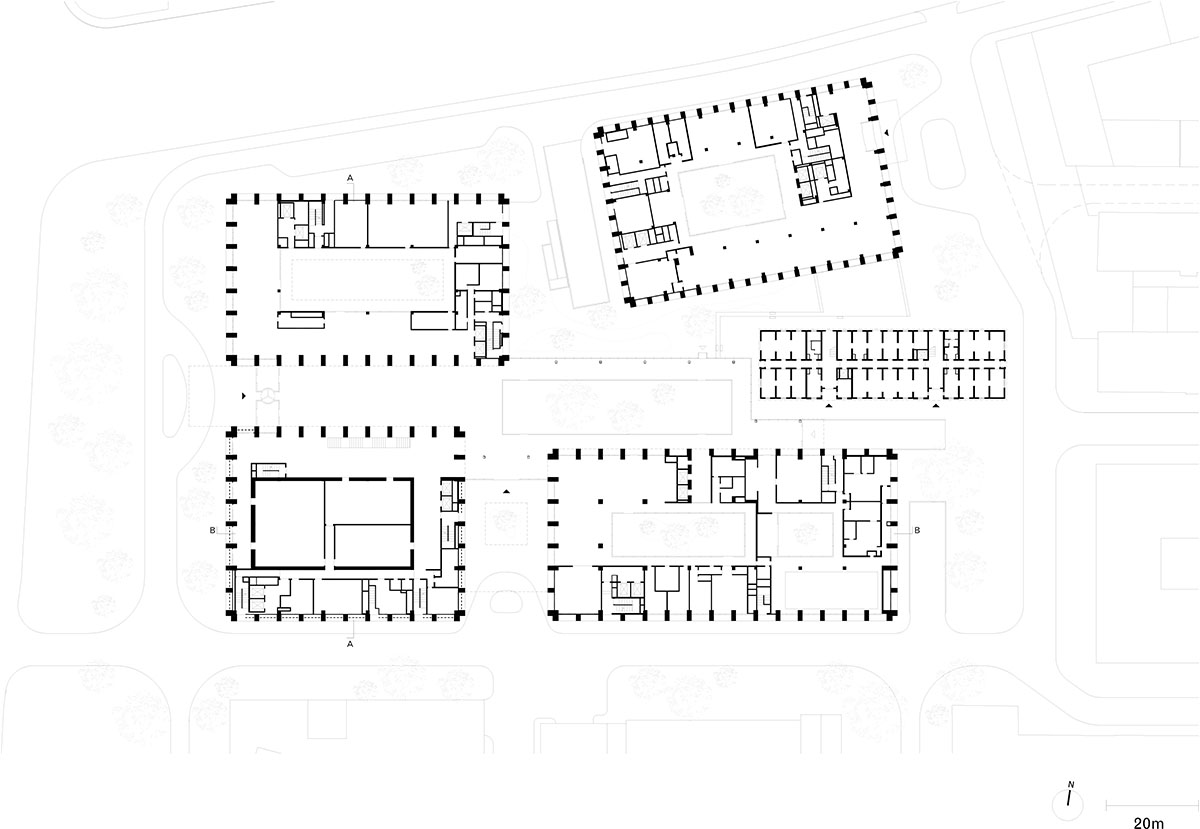 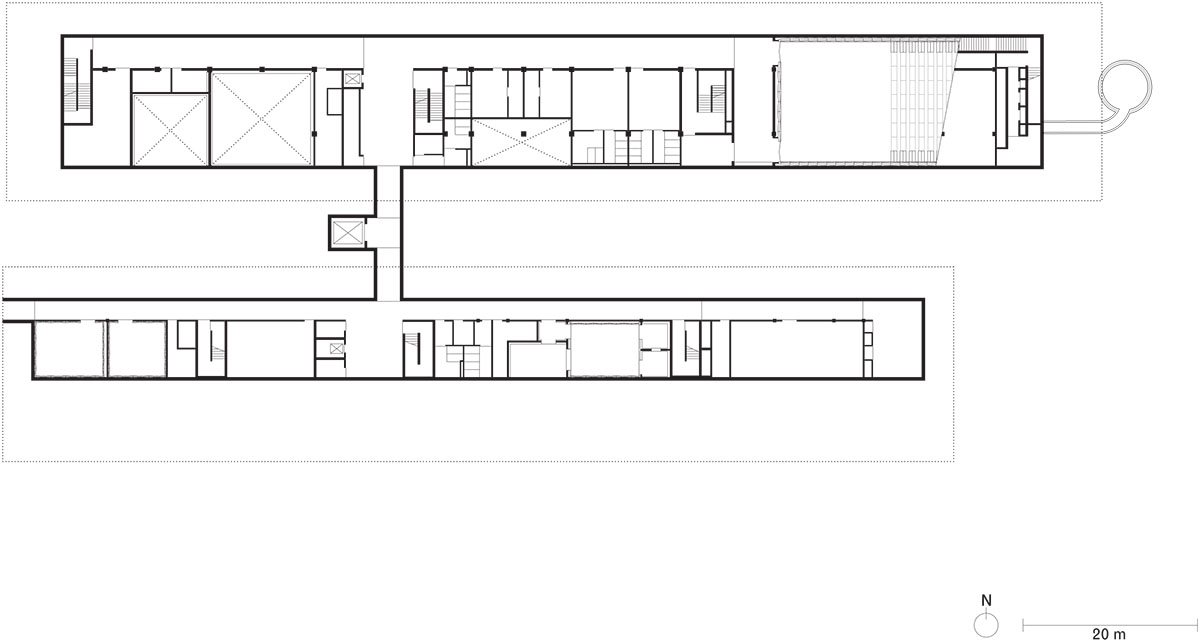 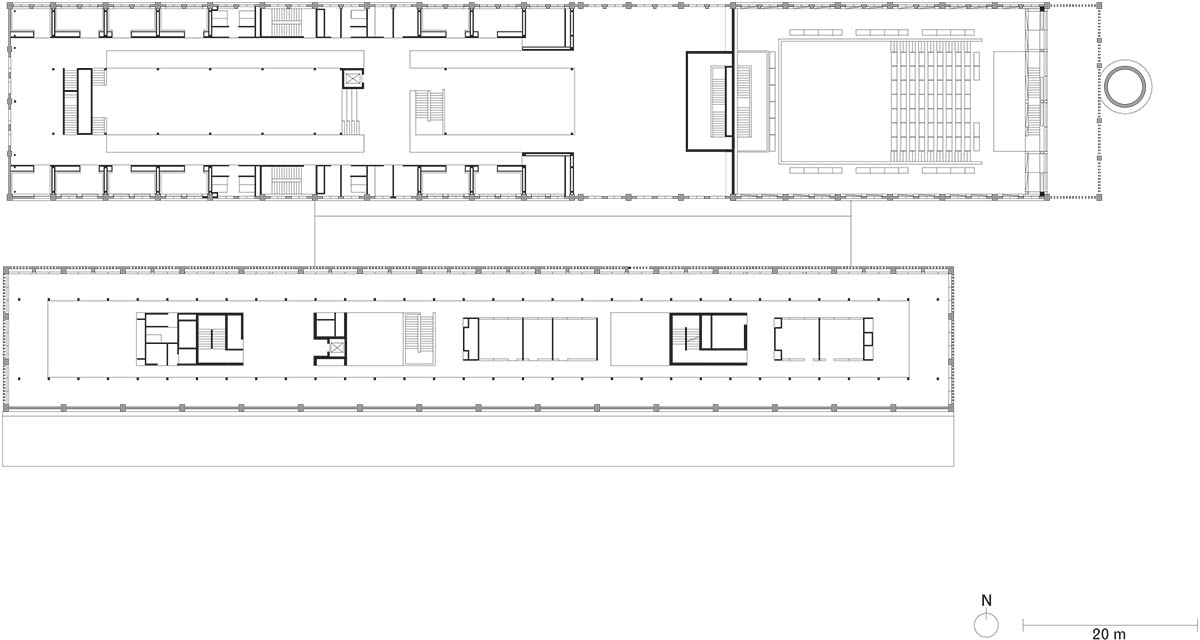