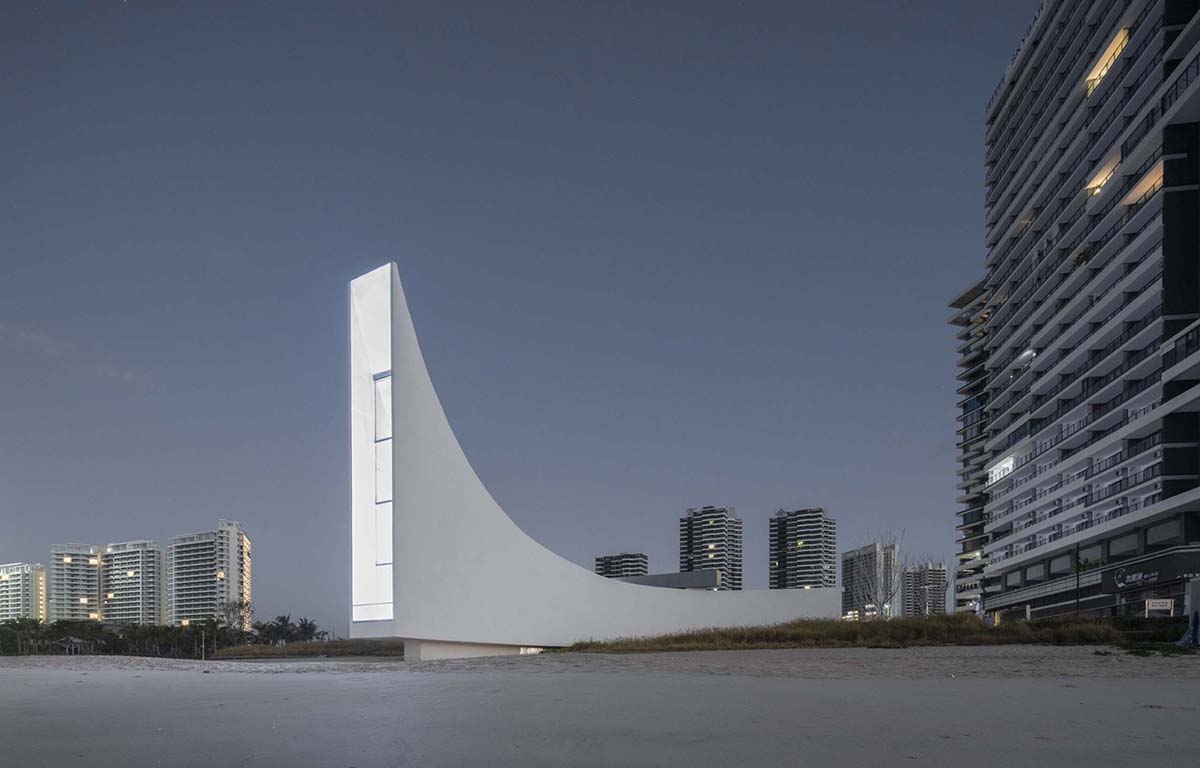 Chinese architecture studio O-office Architects has designed a chapel that opens up a narrow and vertical window to the seaside in Shanwei, China.

Named Chapel of the Jinting Bay, the 384-square-metre chapel is located in Shanwei, known with its historic fishing communities and commercial settlements feeding off the vast South China Sea.

The curvy structure starts from the ground and takes its entrance and is directed towards the sea with a beautiful and smooth transition.  A narrow and large window is the main element that creates its connection with the sea. 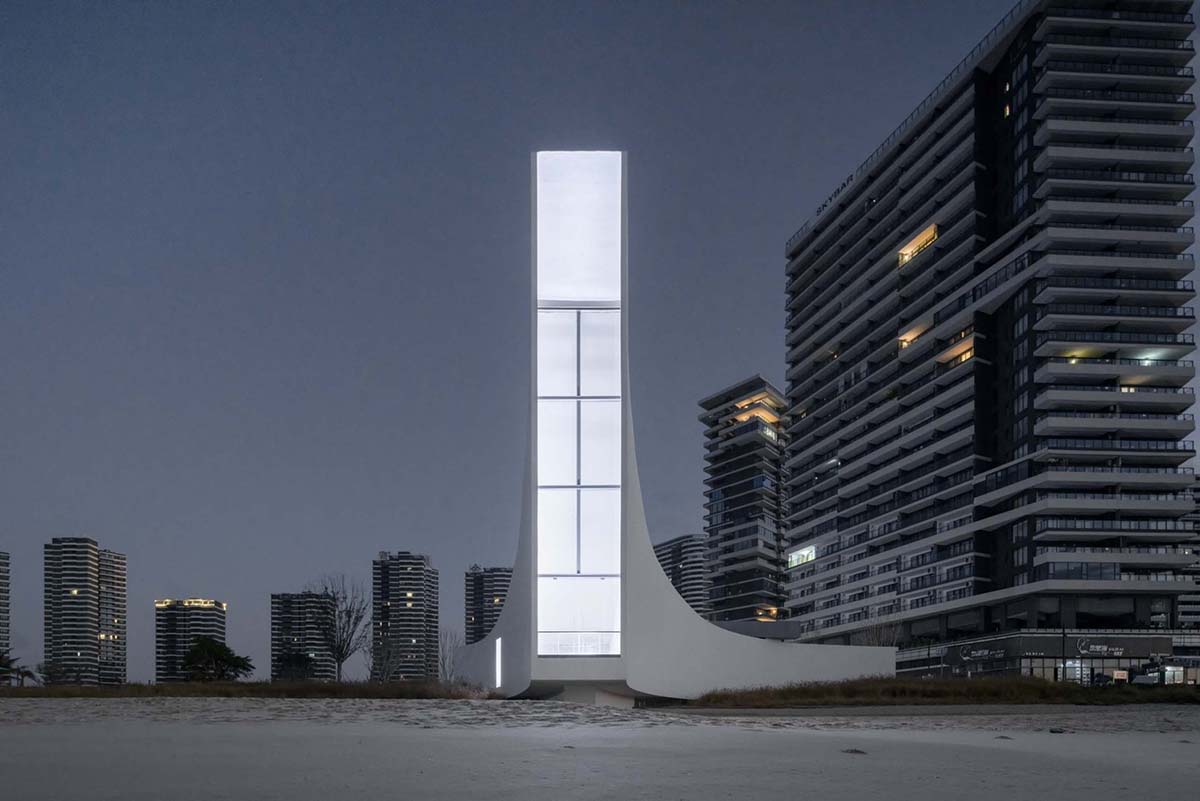 As the studio explained, Shanwei was originally part of the central coastal location of the Haifeng region and occupies more than 10 per cent of the province's coastline length, and a sea area three times the land area.

While explaining the geographical character of the region, the studio said that "the local vernacular is mainly Fulao, a branch of the Minnan." 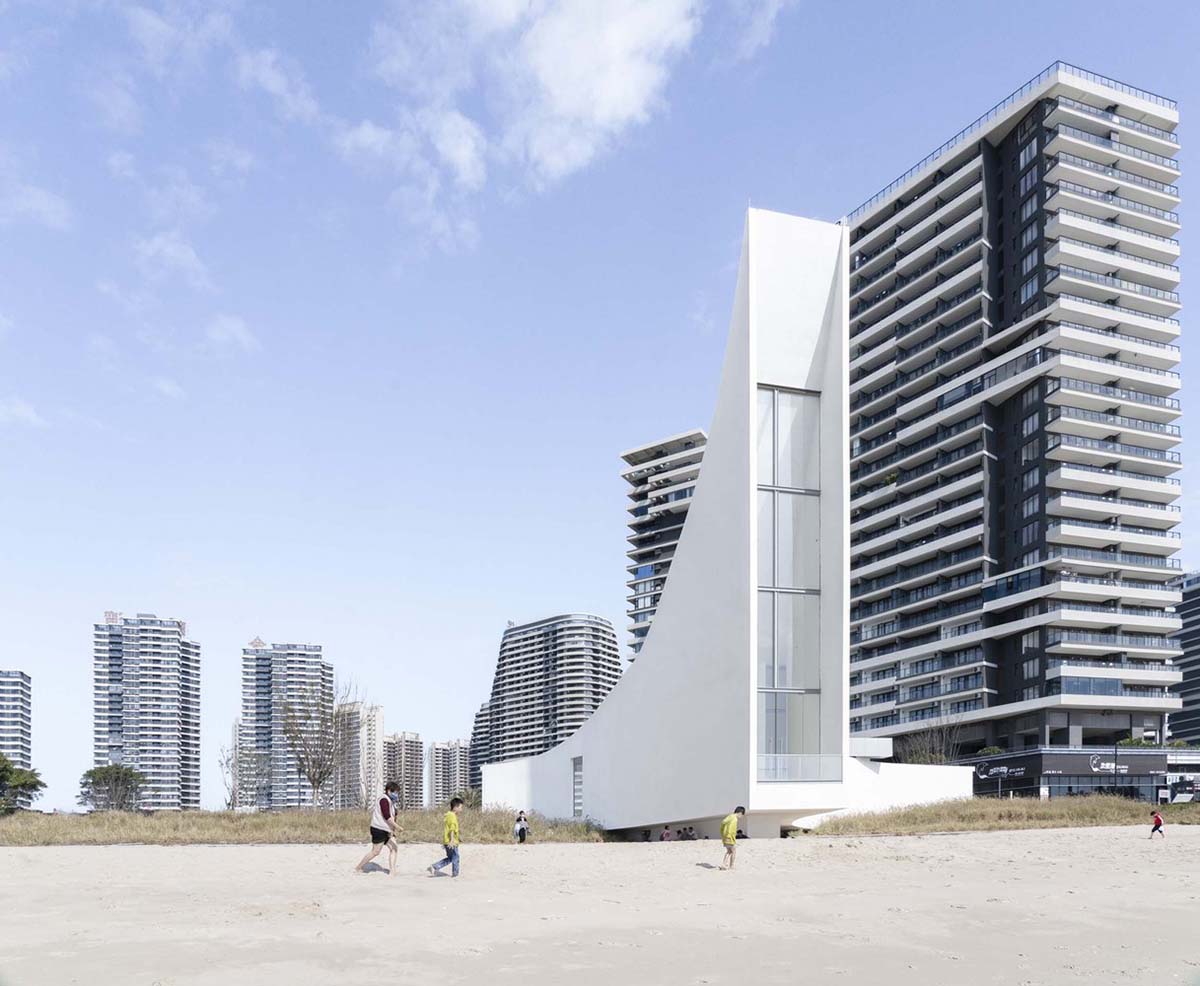 "Traces of tribal settlements of fishermen are found as early as the Neolithic era. The unique climate and geographical location have created a serene humanistic atmosphere and natural scenery of mountains and seas," added the studio.

Based on a simple layout, its flowing interior directs visitors to the large window. The whole program is perceived as compressed between two surfaces. 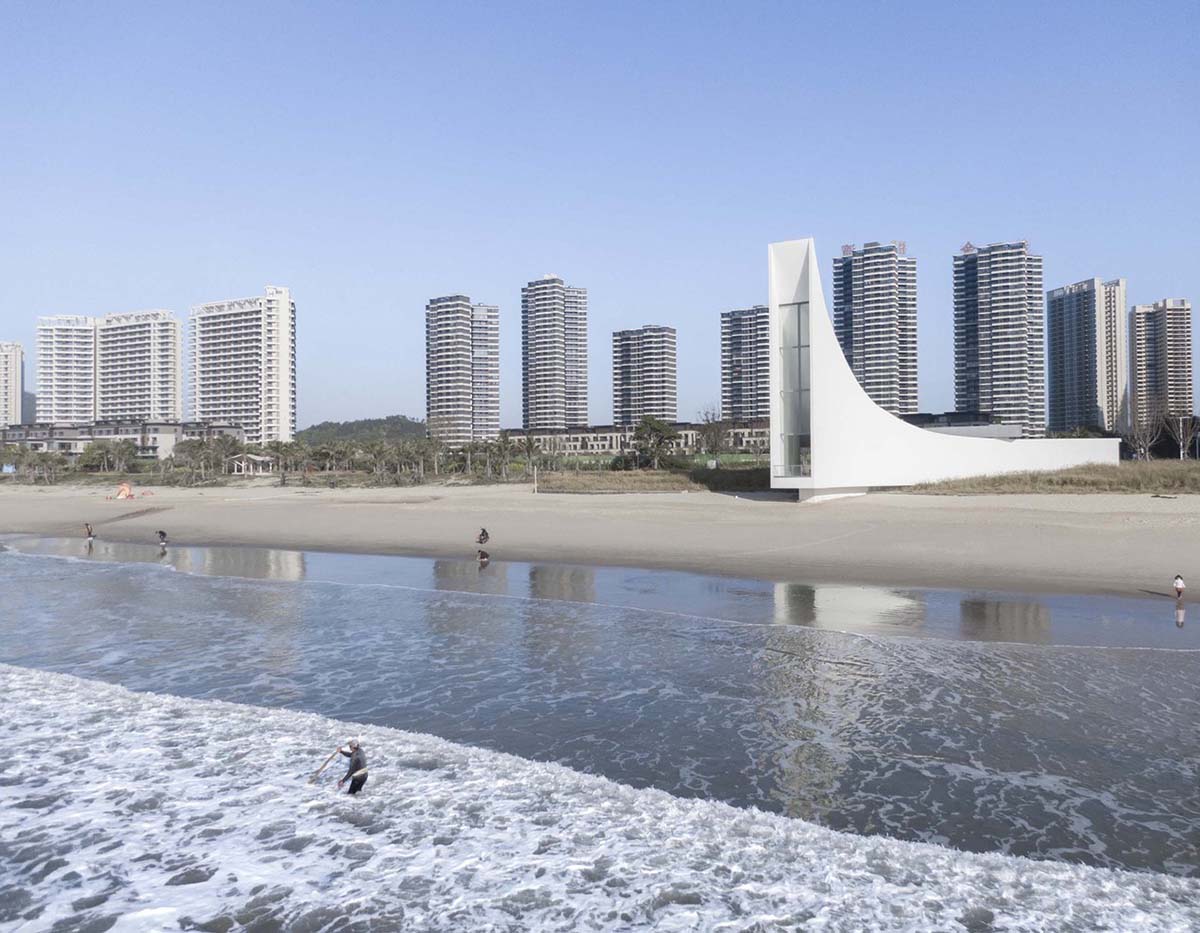 The architects describe the building as a "Statue of the Sea" that creates "a new spiritual and figurative anchor" for this rapid-emerging coastal city. The chapel is aimed to re-establish a relationship between city and town, land and sea. 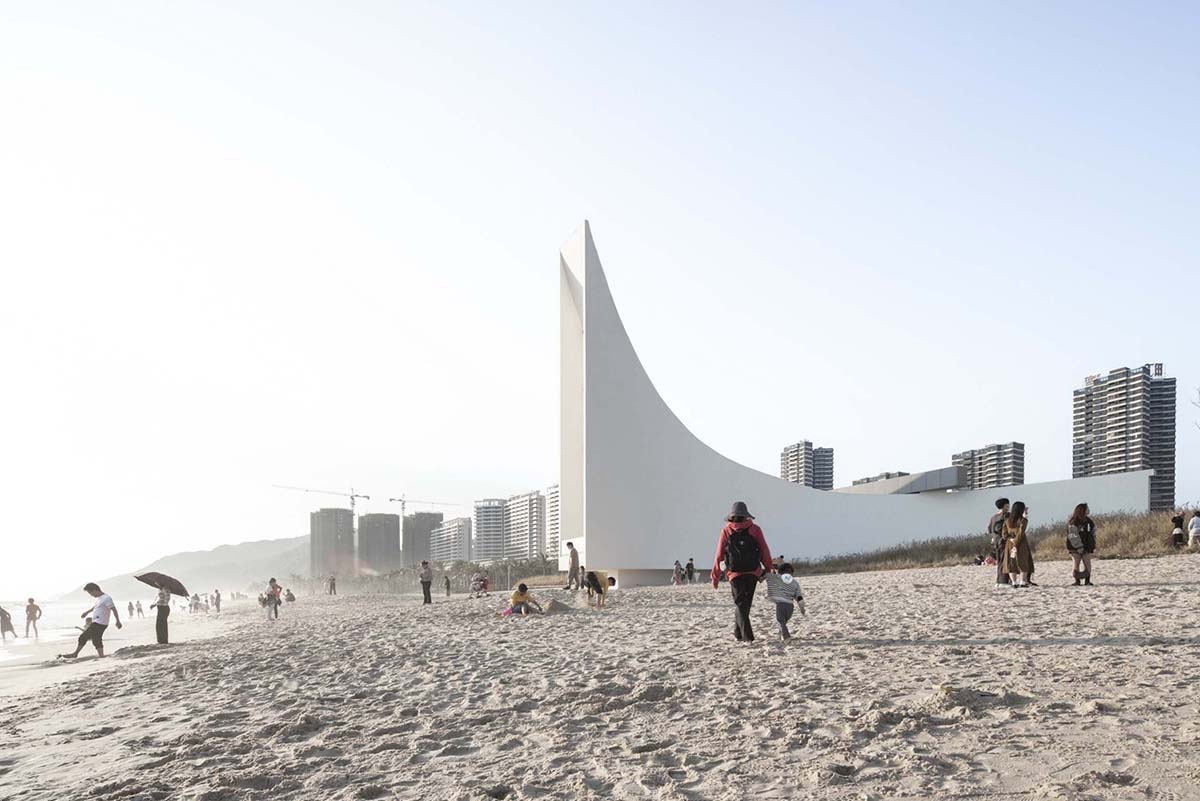 "Driven by the new round of infrastructure construction, the capital spillover from the central cities flowed to these fishing towns in search of tourism opportunities and landscape resources, and the construction of new cities began in these long-neglected areas in the middle of the expanding cities and the fishing villages," said O-office Architects.

"The construction introduced a new townscape typology to the local natural and humanistic landscape, bringing in a heterogeneous variant of the pre-existing high-density city, which quickly occupied the gap in between, triggering a new urbanization process driven by real estate production along the coastline," the studio added.

"As we proceed toward the west. along the beach, around the hills, we arrived at the town of Magong, one of the old-time fishing towns and still earning its living as of present."

"The town greeted our visitors with bustling markets and lines of fishing boats on the shore." 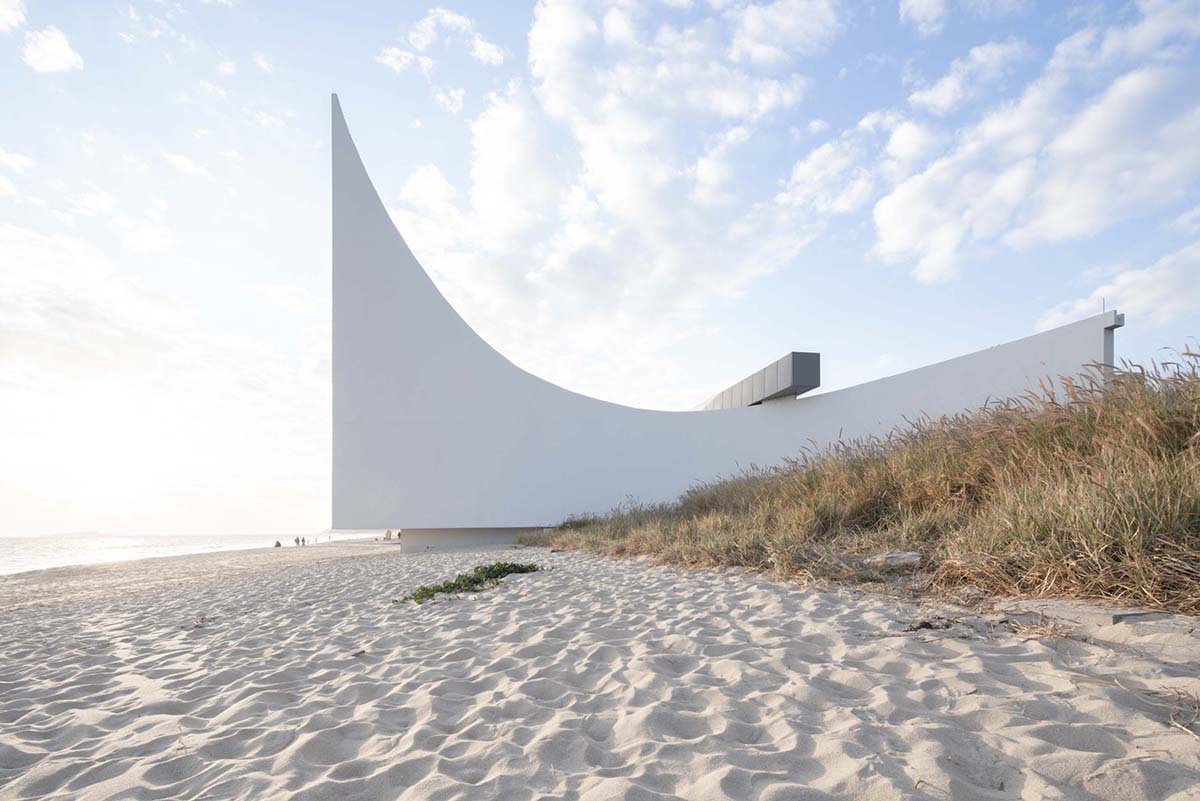 As the studio describes, at the town, there are multi-story bungalows that were built by the residents themselves. These bungalows were completed according to their property grids.

And, the village has already shown the tendency of urbanization instigated by the seafood trade and the newly developed tourist industry.

The architects are inspired by the history of the town, then the studio went back to the Jinting bay – before the disorienting high-rise clusters and the beach scattered with tourists – as the studio noted, "for them the presence of the sea is obviously a different scenery and source of imagination." 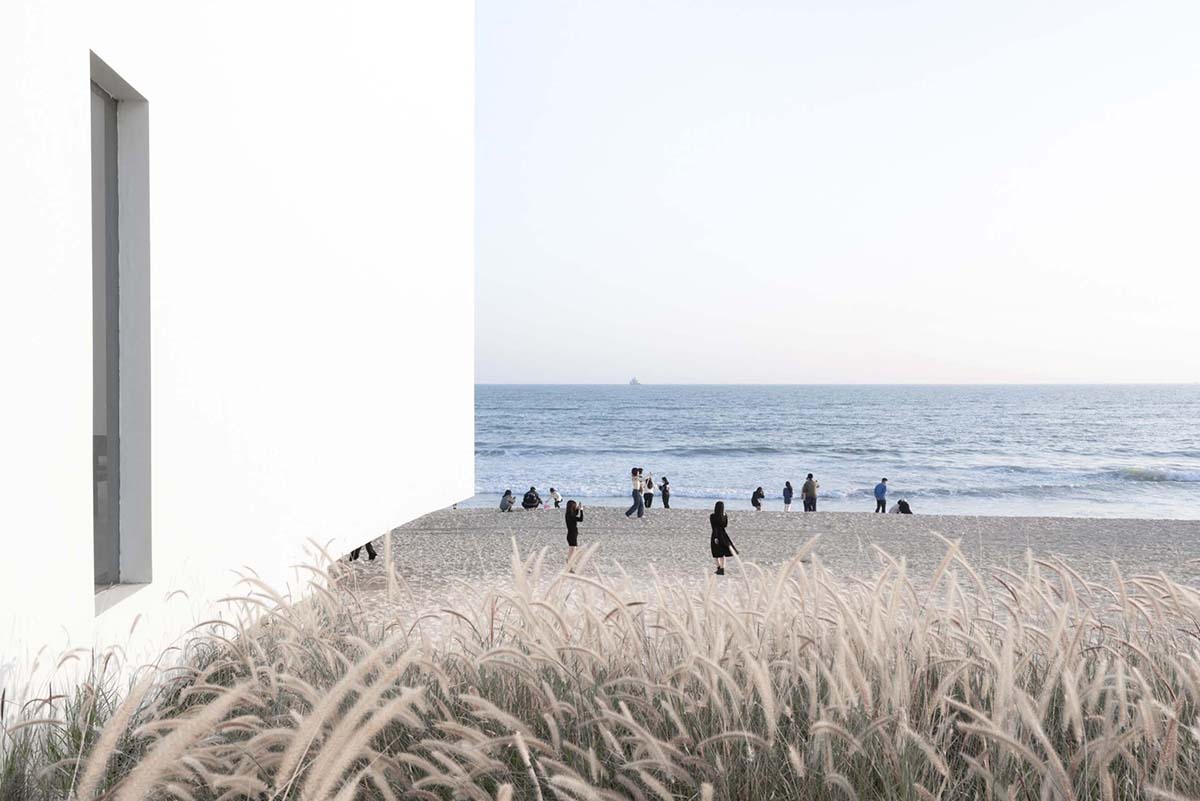 Taking cues from the context, the architects aimed to create this new "image of the sea" with a parallel perspective of history.

When they receive the commission to design a place of ceremonial worship, they intended to emphasize and terminate the central axis of this emerging city facing the sea. 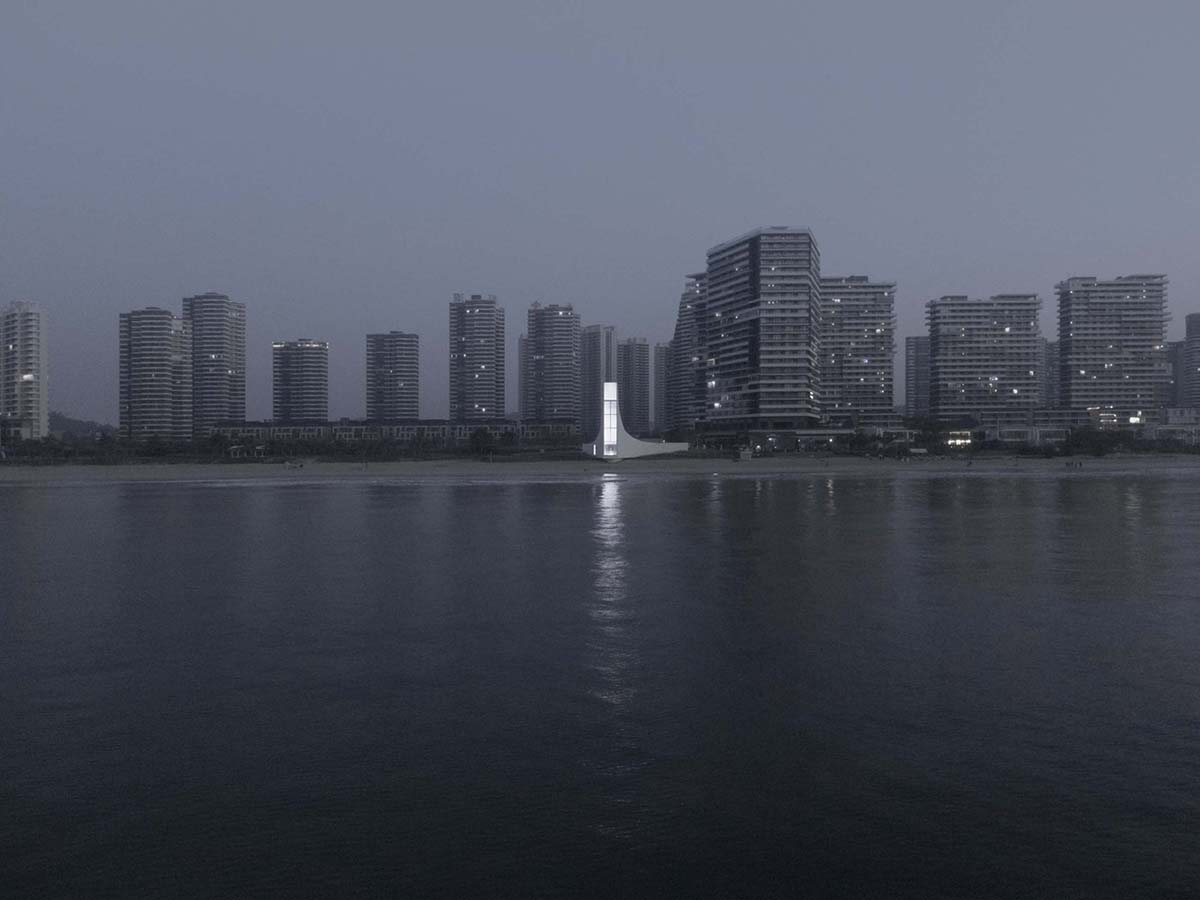 The city-side facade of the chapel contains a horizontal space reaching a height to width ratio of nearly 1:10. In the interior, there are abstract forms of a traditional screen, such as a courtyard and a hall - which spread horizontally against the central axis of the new city. 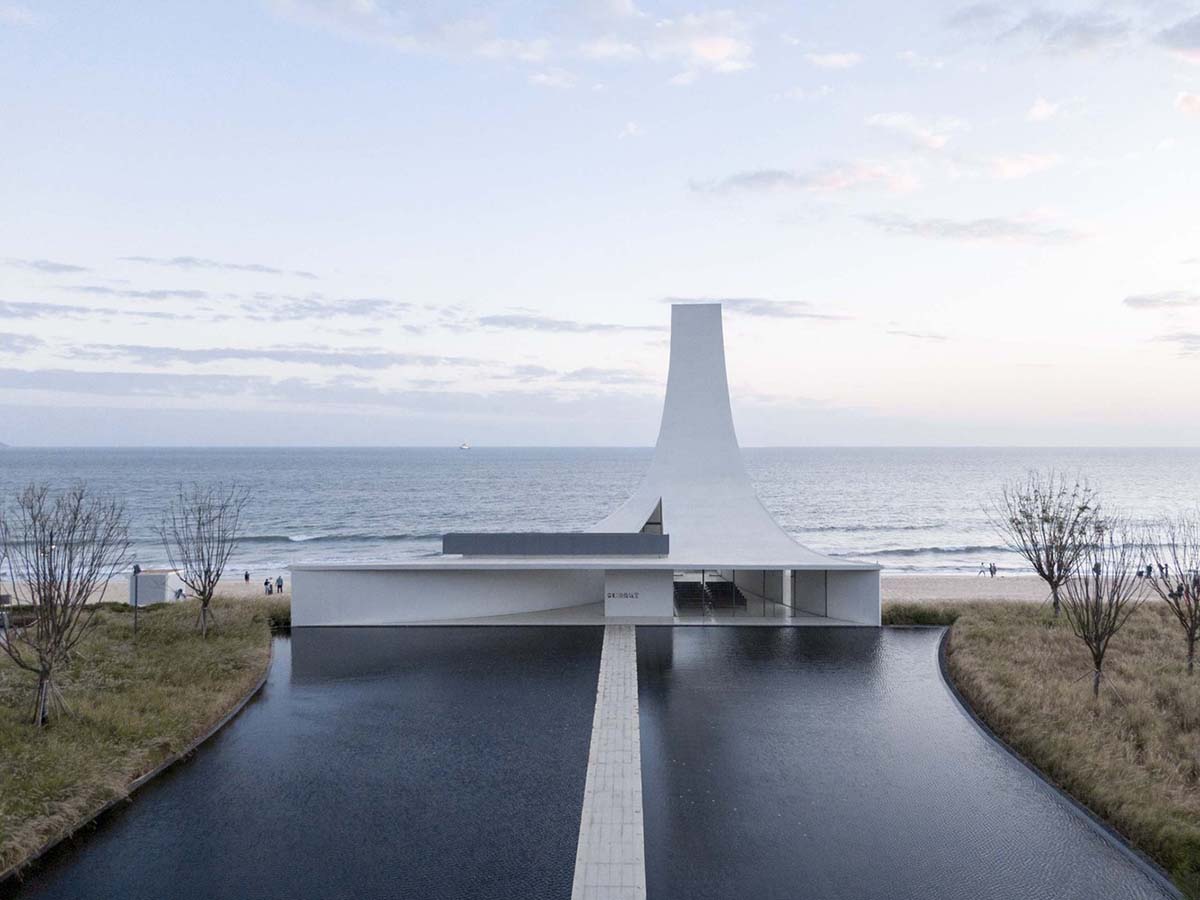 Visitors access the building via a 36-meter-long shaded and paved walkway at the edge of the shallow pool presented a perfect frame and stage for the scenery.

The architects compress the sea-side facade dramatically and stretch it into a beacon on the edge of the ocean. The narrow and vertical façade is wrapped by a transparent upright window with a height to width ratio of nearly 5:1 - a solitude facing the boundless ocean.

"The emerging sky and sea are the end of the ceremonial progression, as well as the beginning of departure for wild imagination for nature," as the team explained. 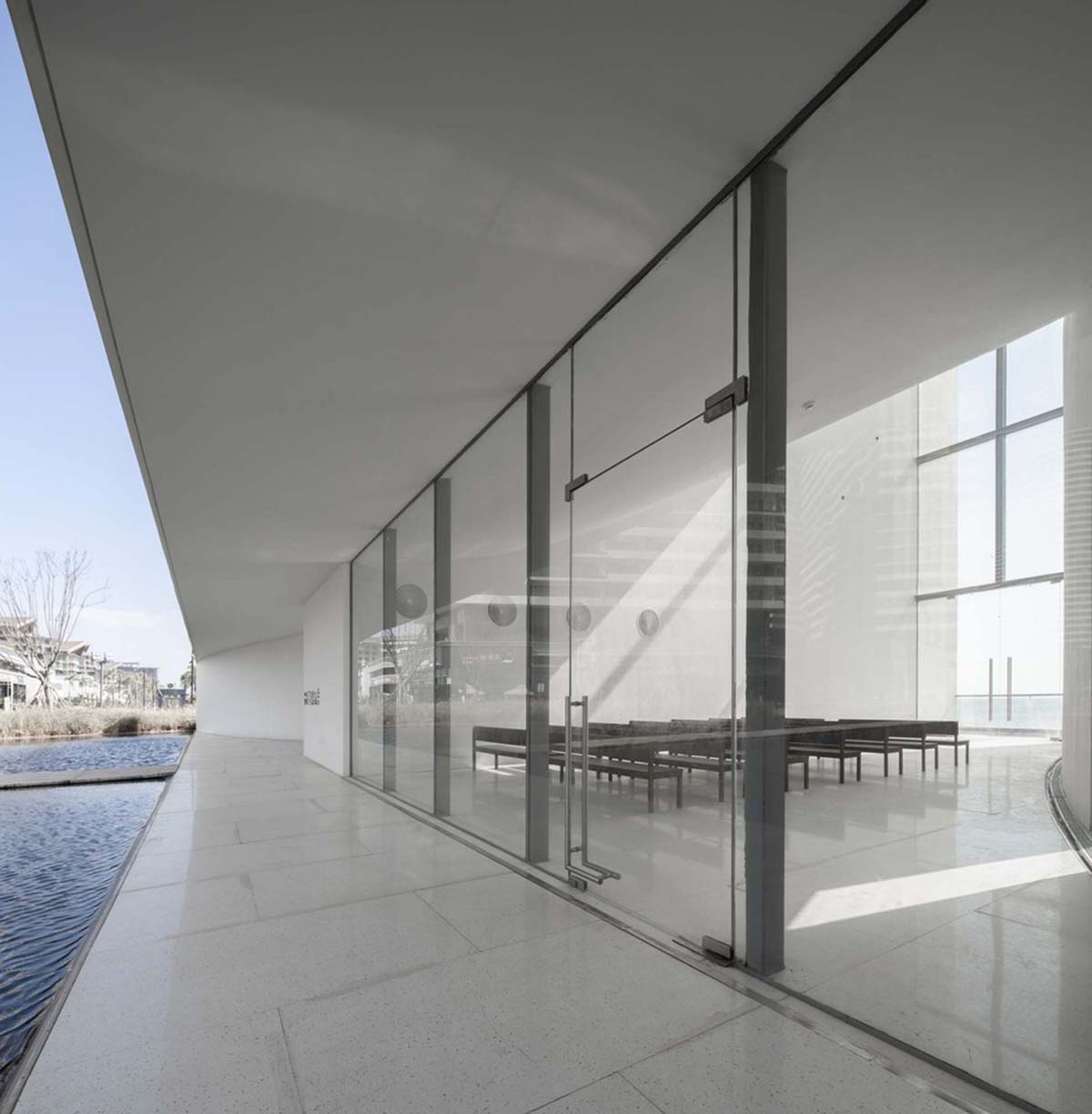 The building begins with exactly one surface and ends with a single surface. However, the resulting sculptural appearance exalts the building and its function. 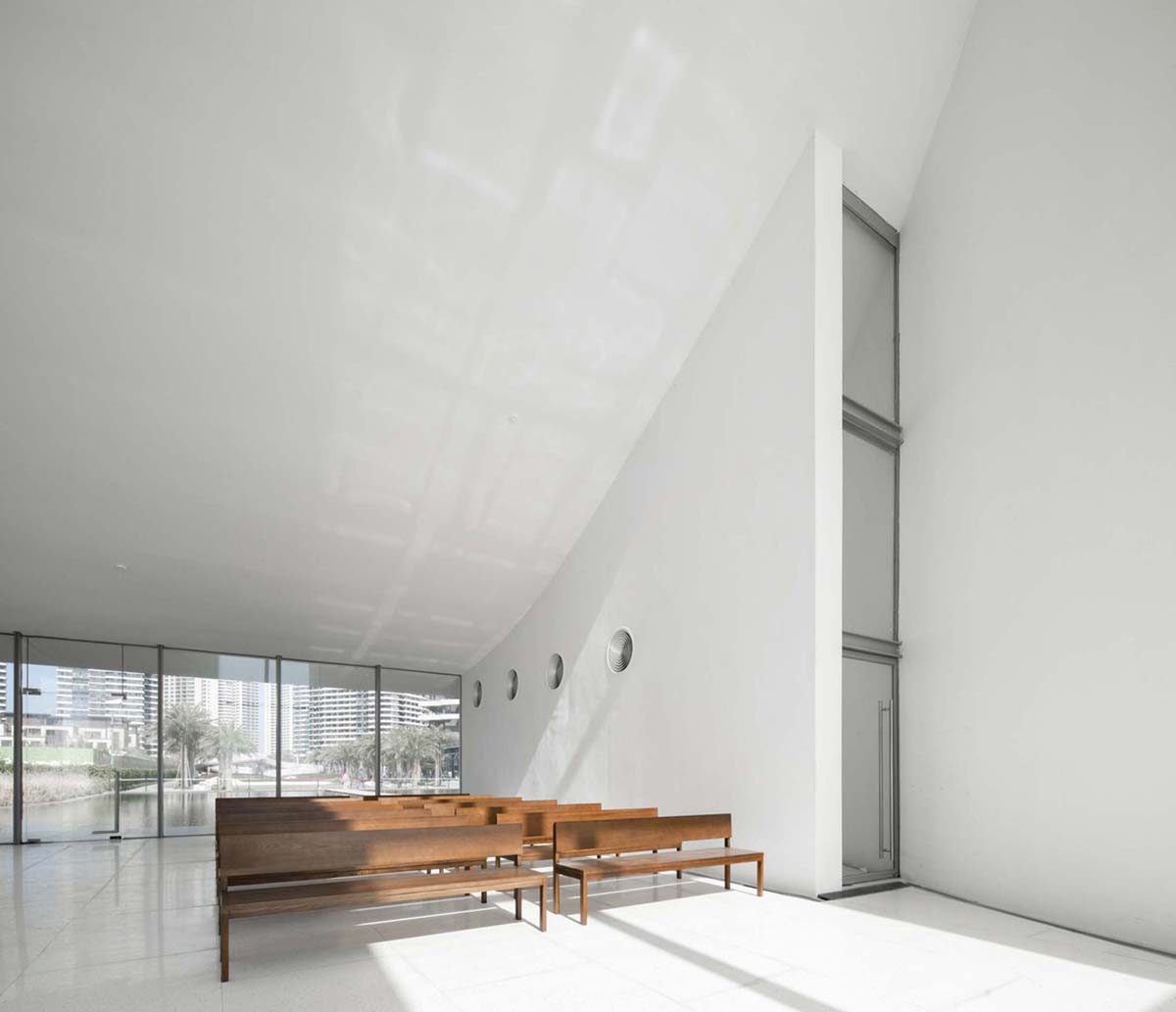 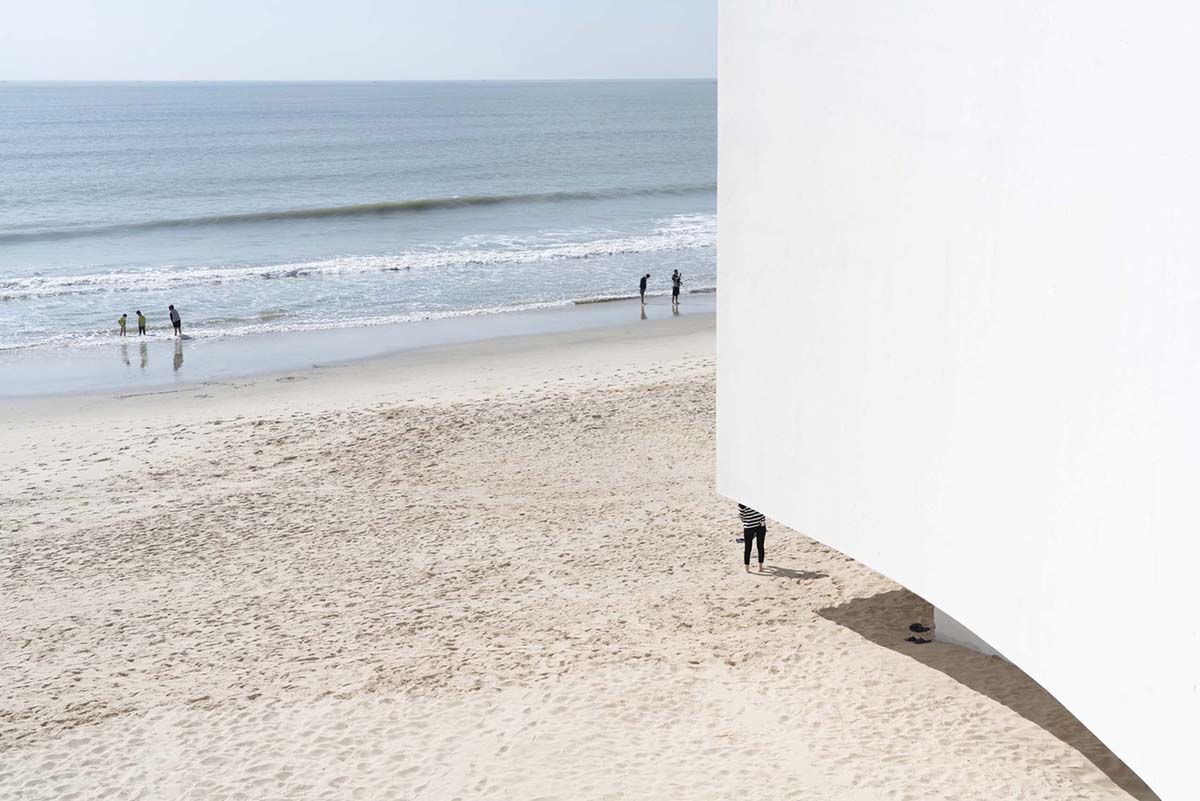 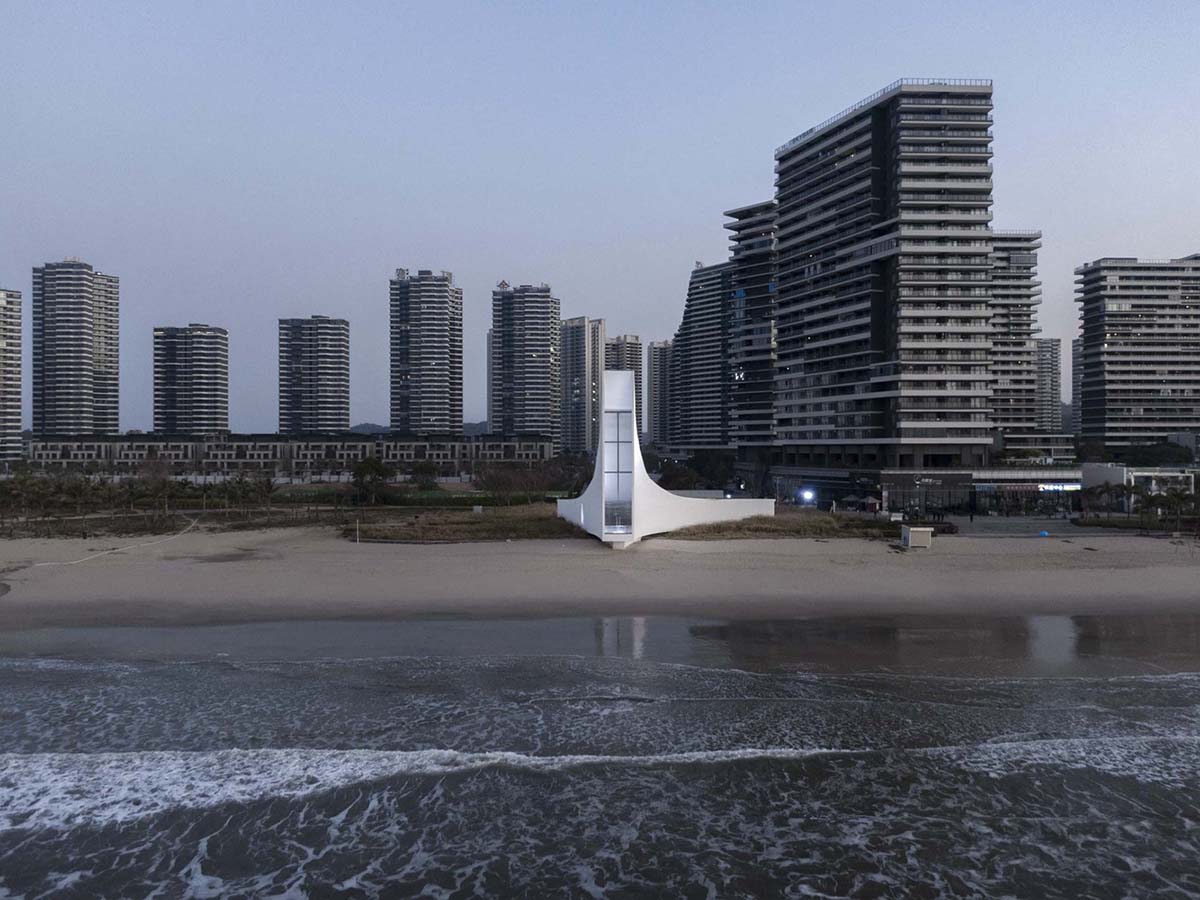 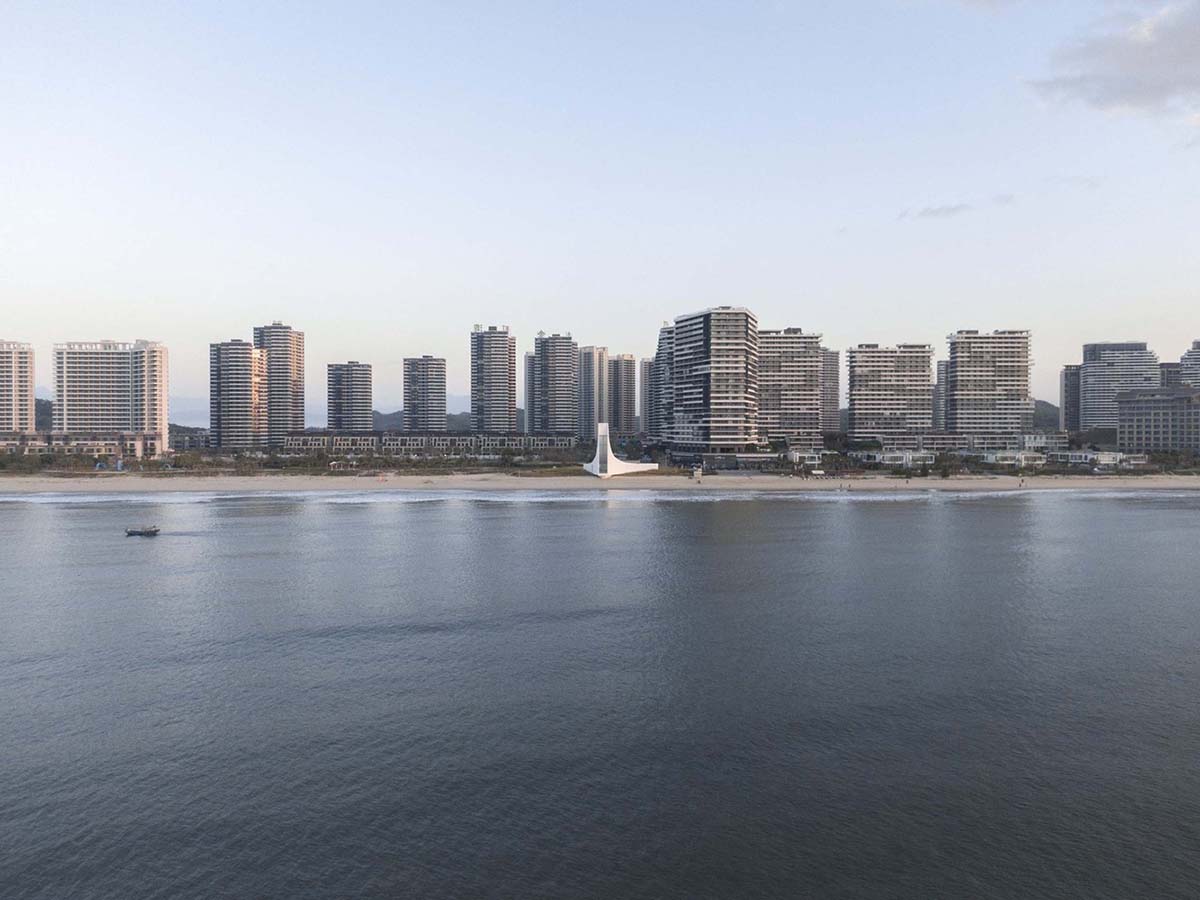 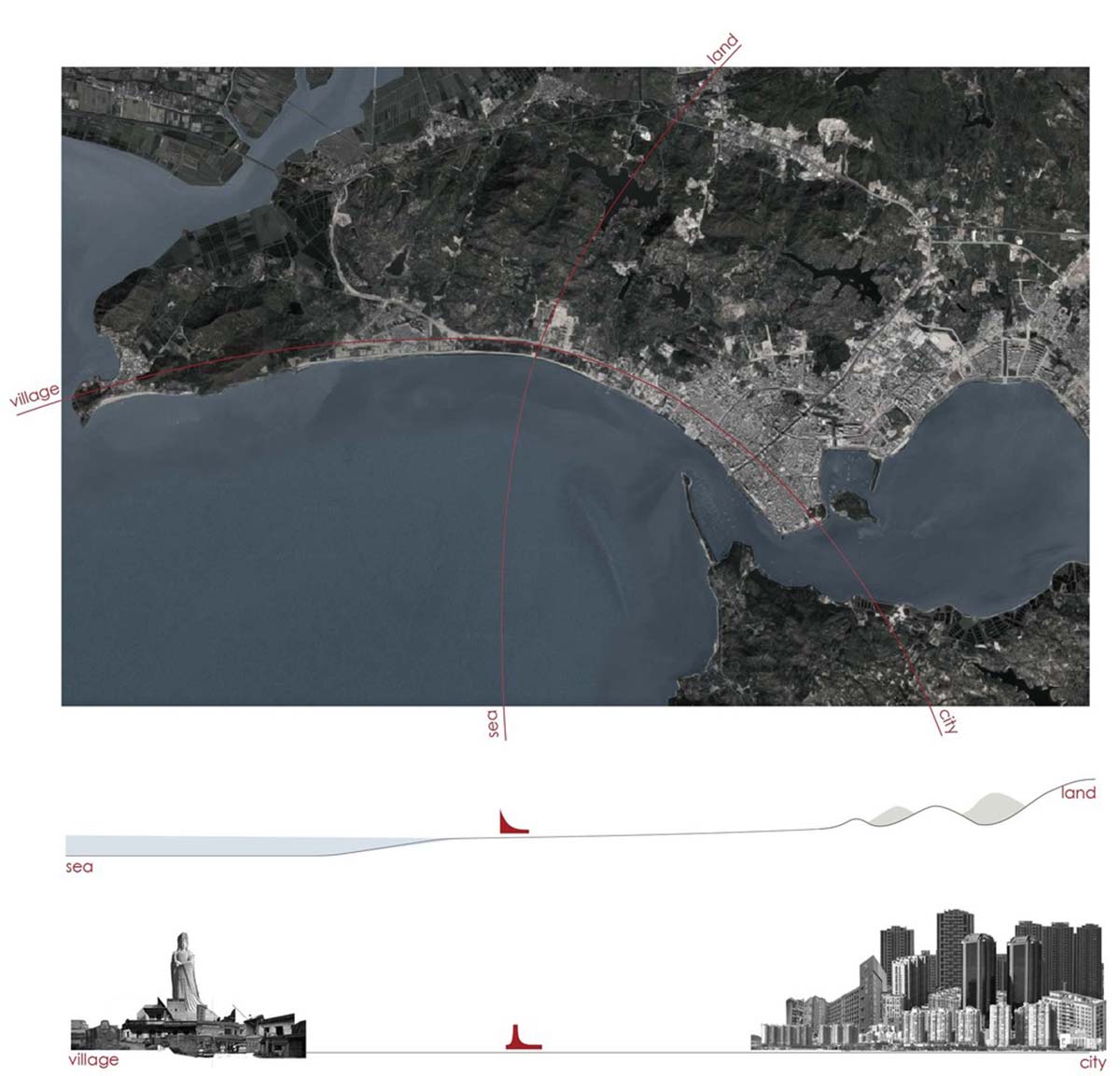 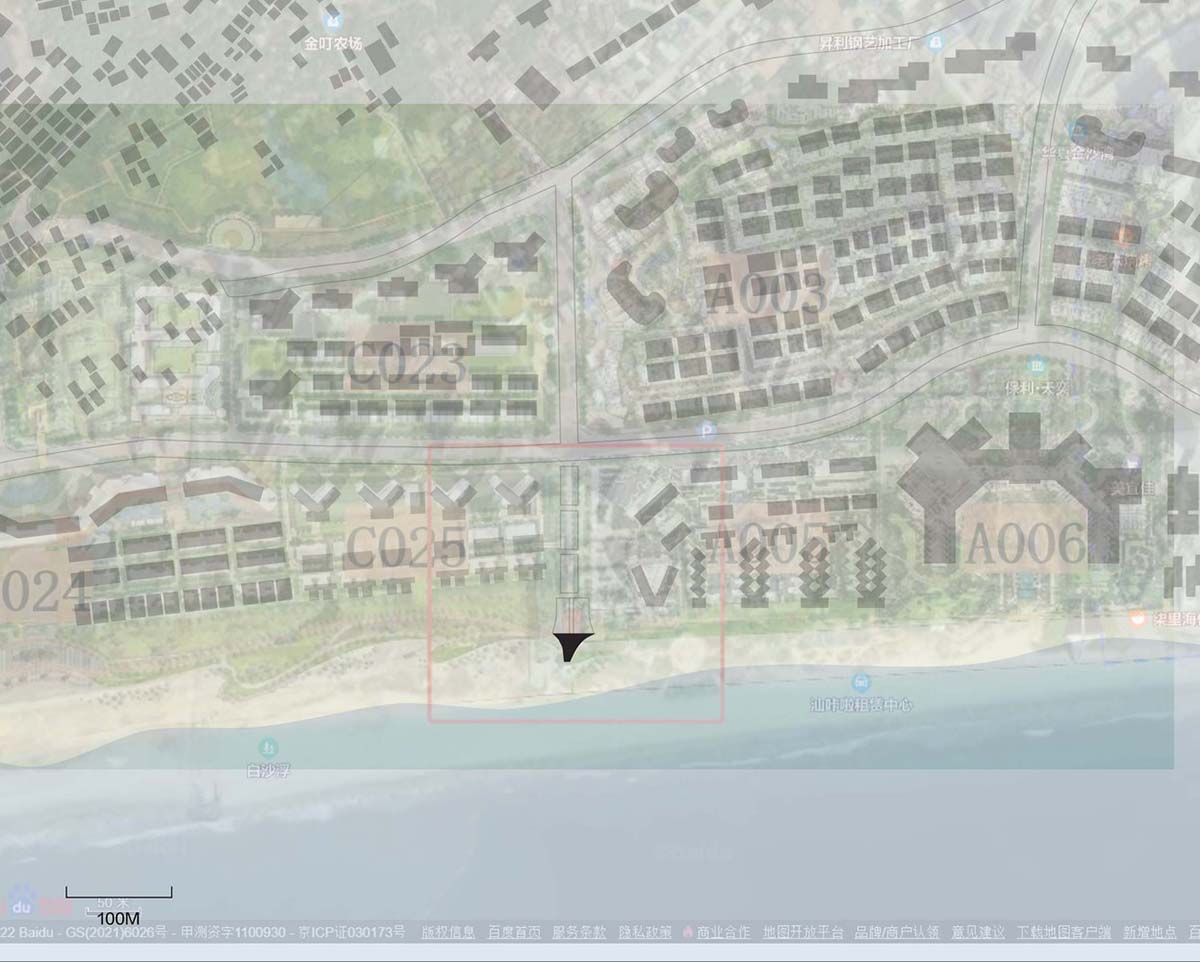 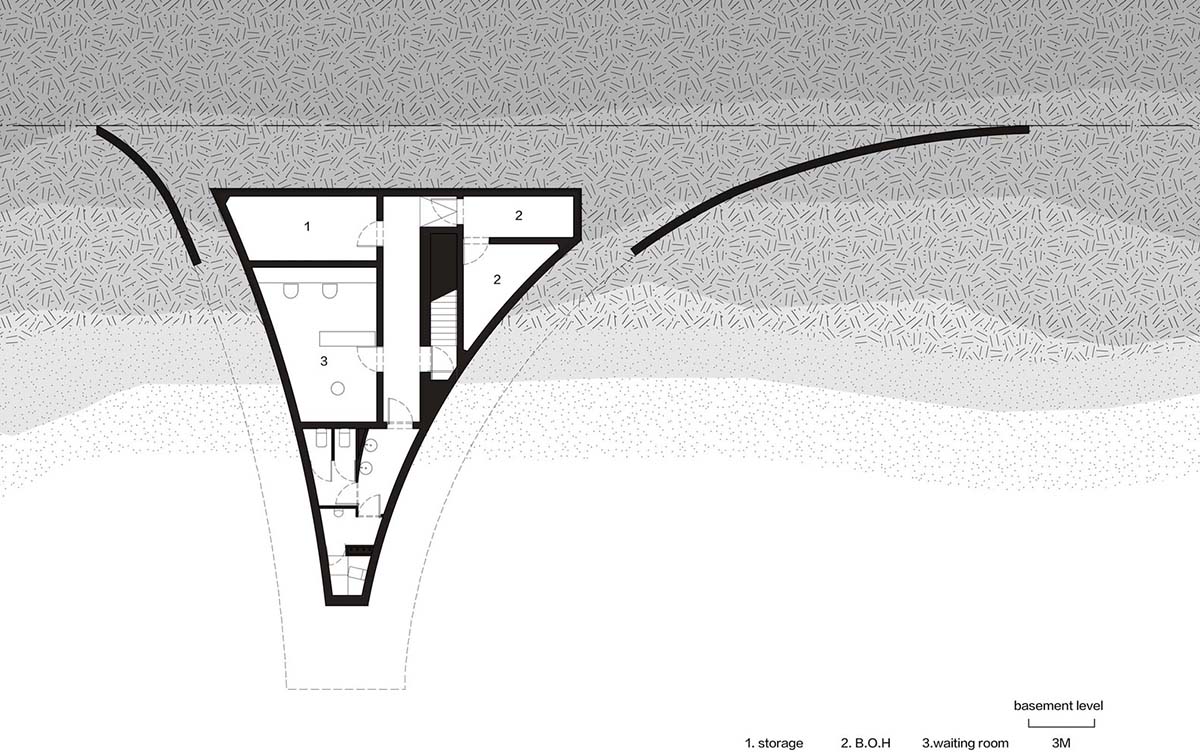 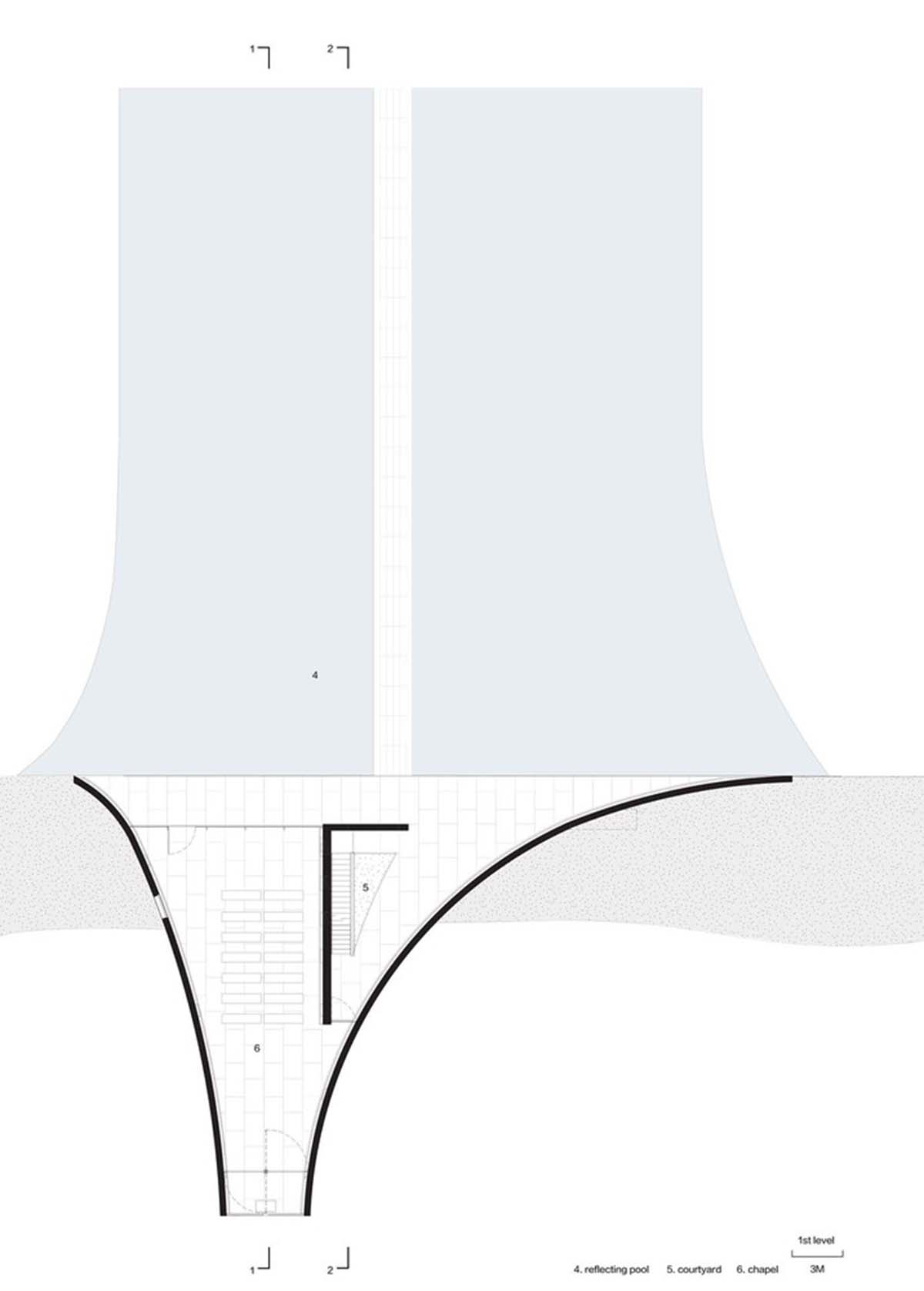 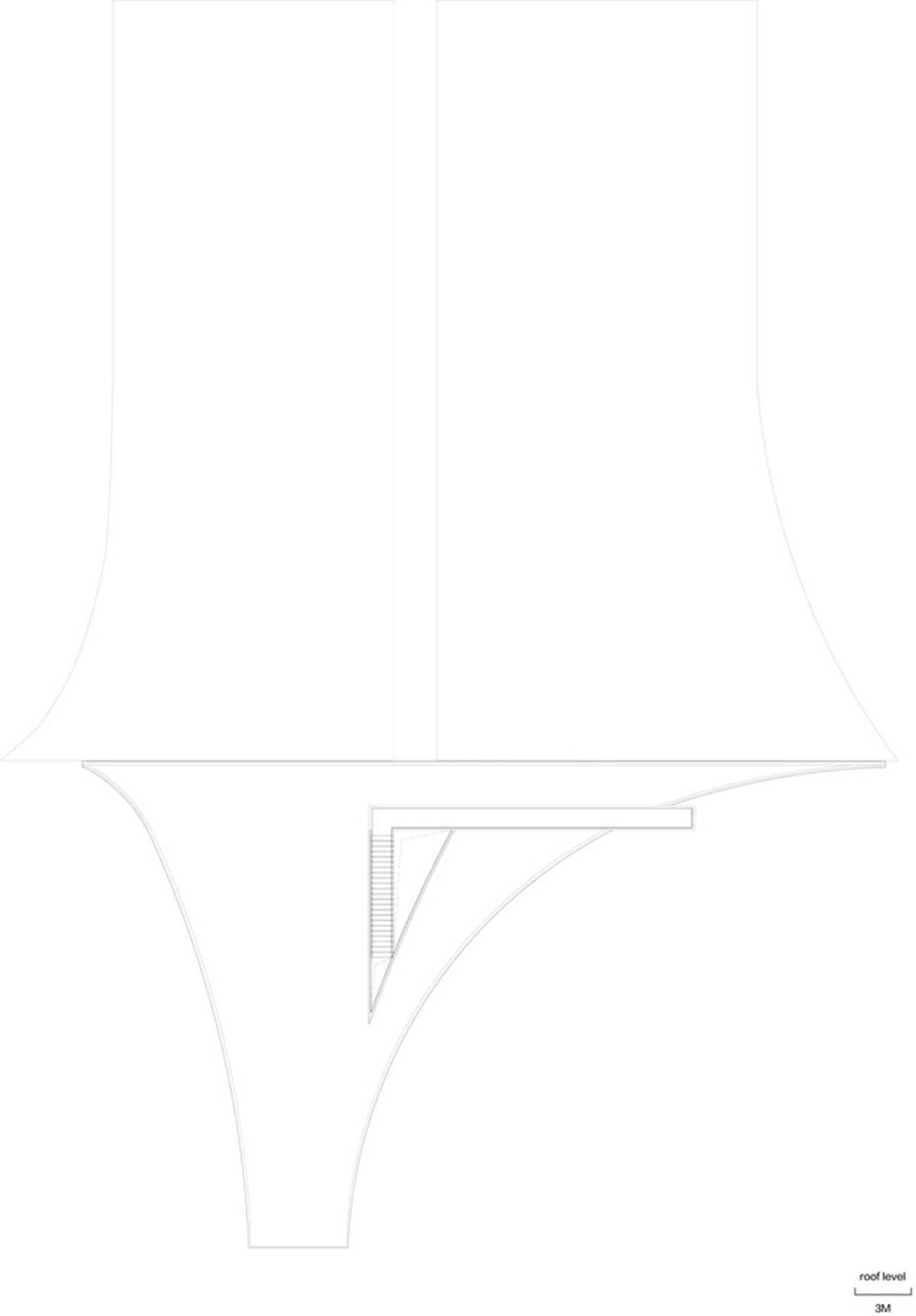 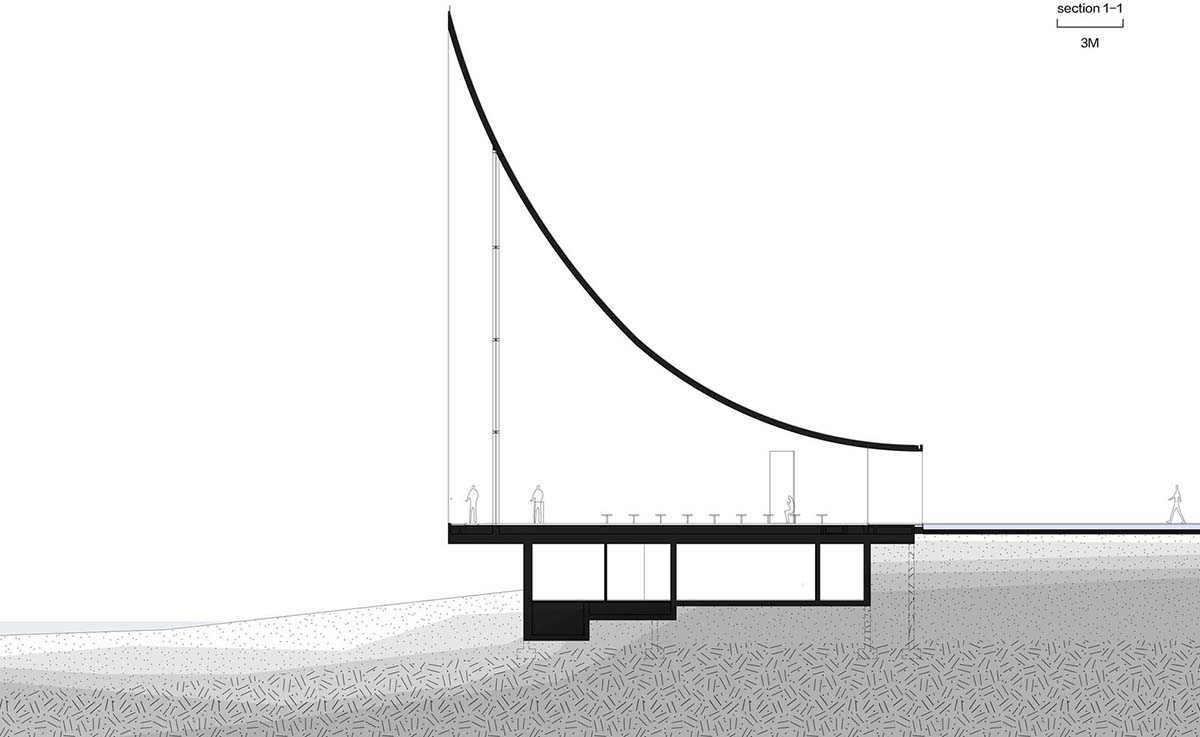 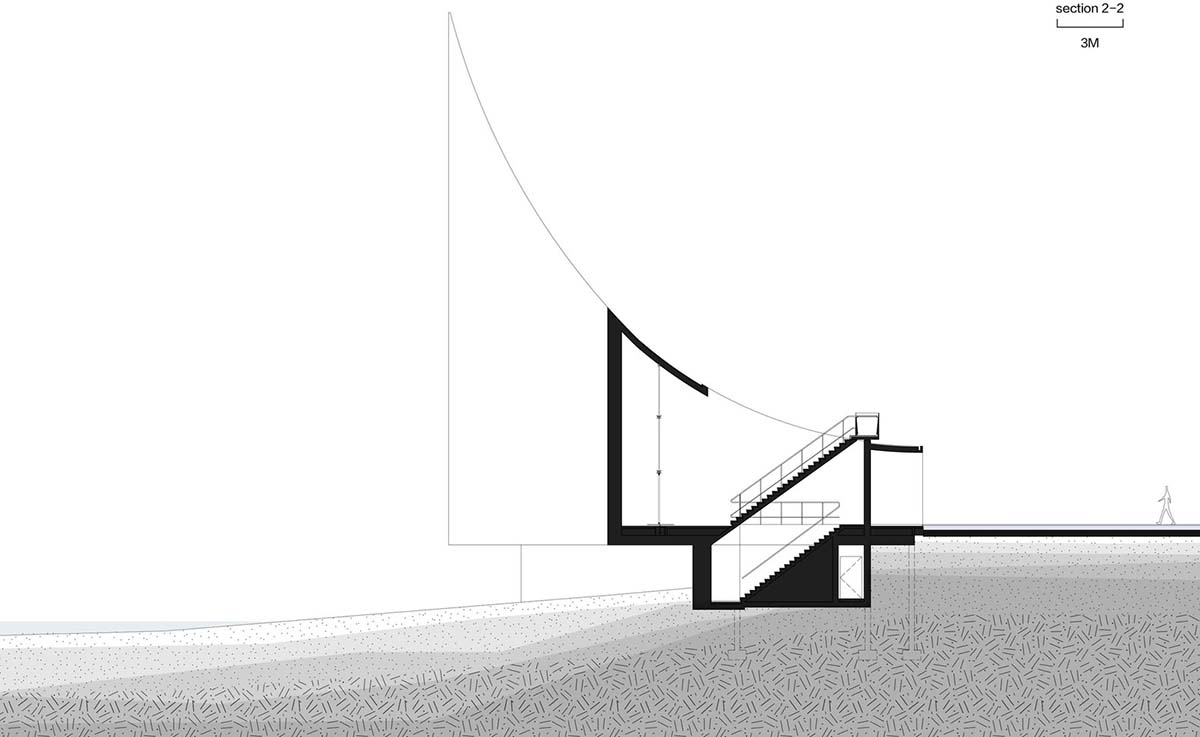 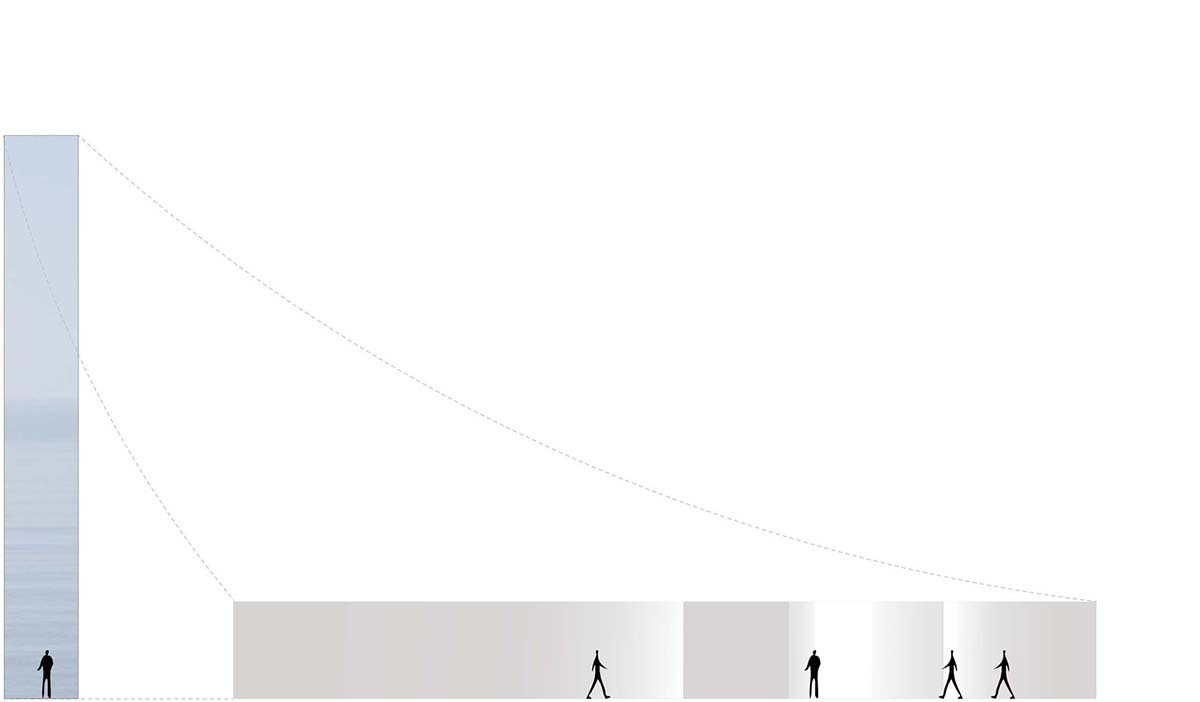 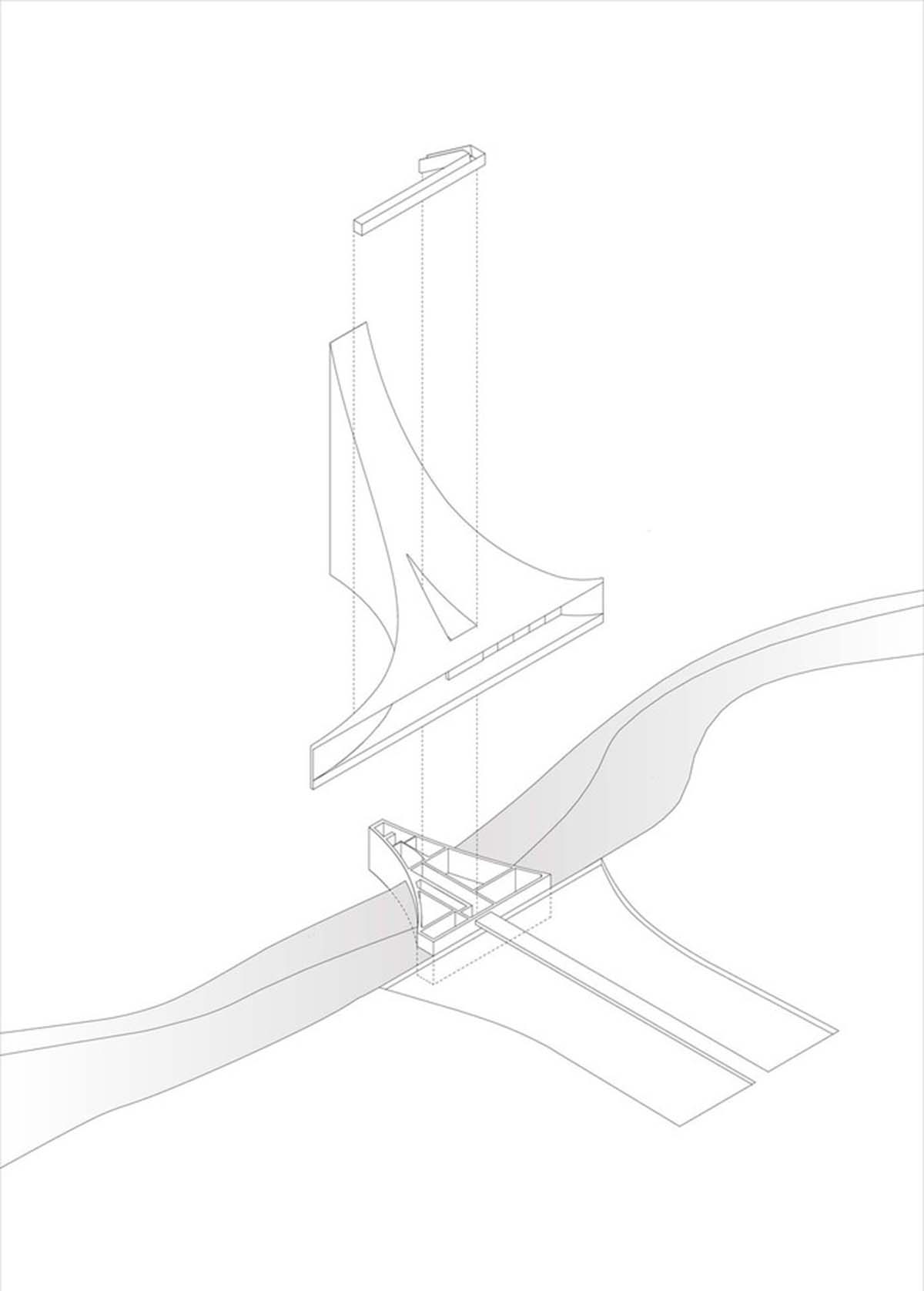 O-office Architects is a Guangzhou-based practice established by He Jianxiang and Jiang Ying in 2007.