Called Fuggerei NEXT500 Pavilion, the wooden pavilion has been designed for the Fuggerei, the world’s oldest social housing complex.

The Fugger Foundations have launched a 5-week programme of interdisciplinary discussions and events about social housing and current global challenges as part of the 500th anniversary of the Fuggerei.

The pavilion was opened on 6 May in the presence of numerous dignitaries and the founders of the Fuggerei, the Fugger family. On Saturday May 7, Ursula von der Leyen, President of the European Commission, visited the exhibition housed within the pavilion.

The exhibition showcases an MVRDV study on the “Fuggerei of the Future”, presenting a new Fuggerei code and three proposals for new Fuggerei complexes around the world.

"500 years of the Fuggerei represents the success that the people of Augsburg have achieved together over the centuries," said Ursula von der Leyen, President of the European Commission.

"Behind this is an admirable sense of citizenship, combined with entrepreneurial foresight. It has proven to be effective to always put the well-being of society above one's own and thus to meet with common strength the historical challenges but also the hardships of everyday life. Europe offers its sincere congratulations on this achievement!," she added.

The 150-square-metre pavilion is designed as a long, narrow, gabled building. To create an undulating and floating geometry, MVRDV is inspired by the long terraced houses of the Fuggerei itself.

Rather than a single straight block, one end of the pavilion is slightly curved and raised up to suggest its role in looking out to the future Fuggereien, both in Augsburg and around the world.

This lifted part creates an 8.5-metre cantilever that houses a tribune for lectures, debates, workshops, and other cultural events.

The pavilion is made entirely from cross-laminated timber (CLT), pushing the boundaries of modern CLT technology with its 8-metre cantilever and double-curved elements.

"Sustainability played a critical role in the selection of this structural approach; wood stores carbon instead of releasing it into the atmosphere, while CLT allowed the pavilion to use a modular system that makes the pavilion easily demountable, ensuring it can have a second life within a social or sustainable context," said MVRDV.

The wood was sourced from the Fuggerei’s own forests, while a local carpenter created the wooden interiors.

Inside the pavilion, visitors can experience an exhibition on the “Fuggerei of the Future”.

Though the Fuggerei was founded in 1521 by the German merchant Jakob Fugger, in these times of housing shortage, climate crisis, social inequality, and isolation, the sustainability-oriented and people-centred concept of the Fuggerei still offers a model for our current era.

For the exhibition, MVRDV and the Fugger Foundation studied the existing complex in Augsburg and, in line with the Fuggerei’s newly written “Fuggerei Code”, distilled the complex’s formula for successful social housing.

The result is 8 simple “building blocks” that provide the basis for a system for new Fuggerei that can be adapted to differing contexts worldwide. These building blocks are also referenced in the pavilion’s internal layout, with eight different spaces for the exhibition and events inspired by the eight building blocks.

"The NEXT500 Pavilion is an extraordinary wooden building and the final highlight of our anniversary year," explained Alexander Erbgraf Fugger-Babenhausen, the chairman of the Fugger Family Senior Council.

"A varied programme will be offered over a period of five weeks, to which the public is invited. As a foundation, we want to open a new chapter in the history of the Fuggerei together with interested parties. To mark the 500th anniversary of the Fuggerei, we developed an initiative to ensure that the Fuggerei of the future can be replicated worldwide."

To test these principles, MVRDV also developed three proposals for Fuggerei both inside and outside Europe. The first is proposed for the original hometown of Augsburg, and is distinguished from the original Fuggerei by its educational focus, aiming to provide self-determination and to reduce the city’s wealth gap through education.

The second Fuggerei of the future is intended for a community in rural Lithuania, focussing on elderly poverty and a crisis in social care due to an aging population with a complex set in a beautiful natural environment.

The third Fuggerei focusses on Rothumba, a remote fishing village in Sierra Leone, with the strategy of empowering residents and creating a safe environment for women and children. Based on the Fuggerei Code and building blocks developed in the study, the appearances of these future Fuggereien depend on their purpose and location, but the principles are the same as the 500-year-old original.

"The lack of affordable housing is something that affects people all over the world," said MVRDV founding partner Jacob van Rijs, “while in my view it is a basic right.

"Our team at MVRDV researched what kind of Fuggerei different places would need, with a focus on education, the elderly, gender equality, and the empowerment and economic independence of the inhabitants. I am delighted at the massive interest in the celebration of 500 years of Fuggerei, which shows that this is a global issue that needs urgent attention," Jacob van Rijs added. 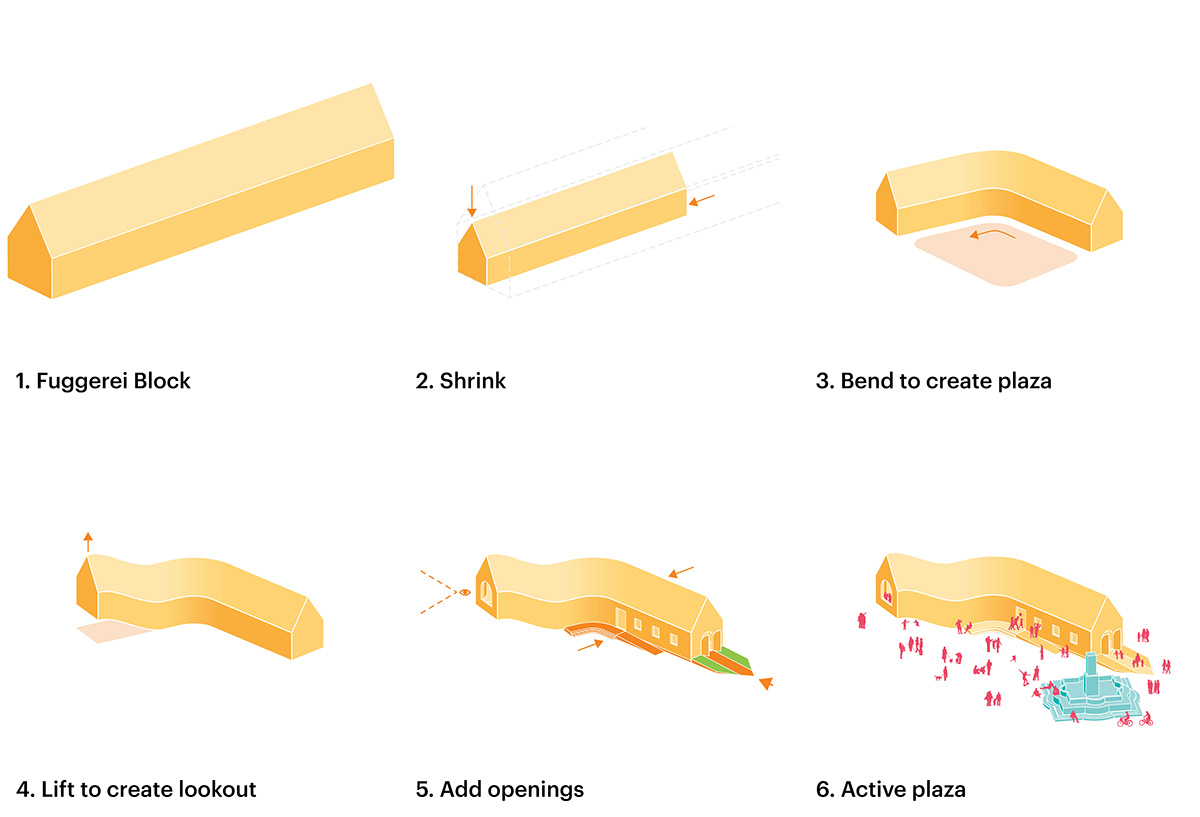 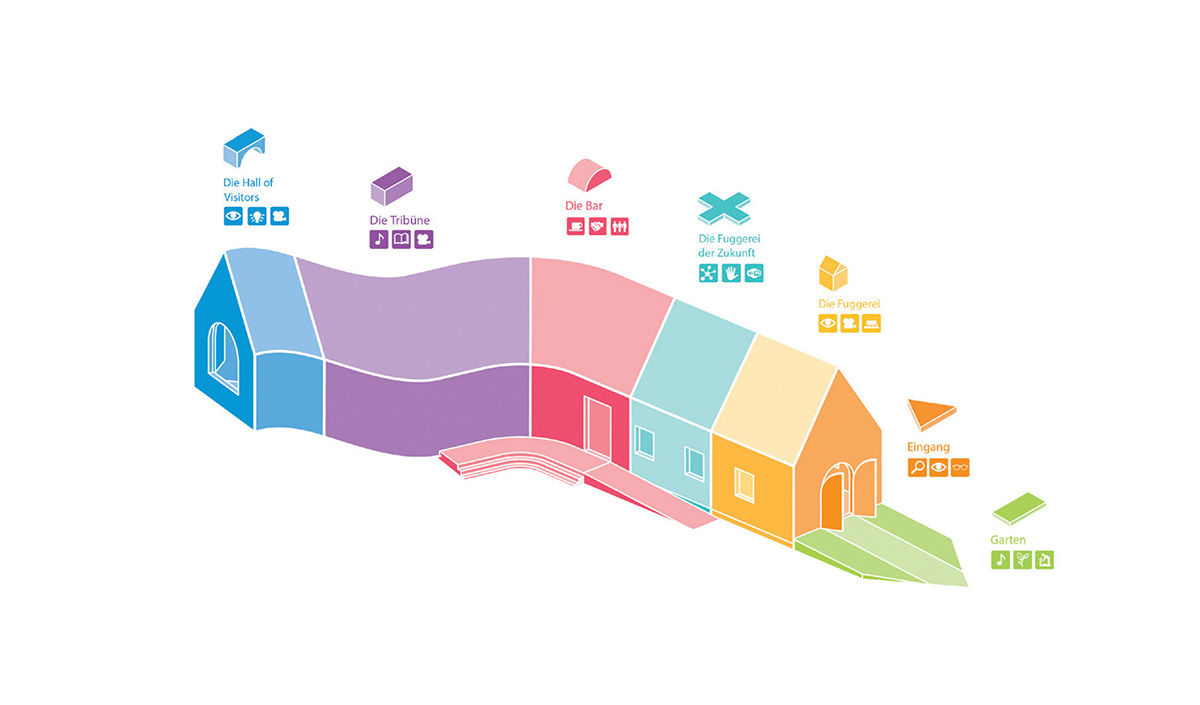 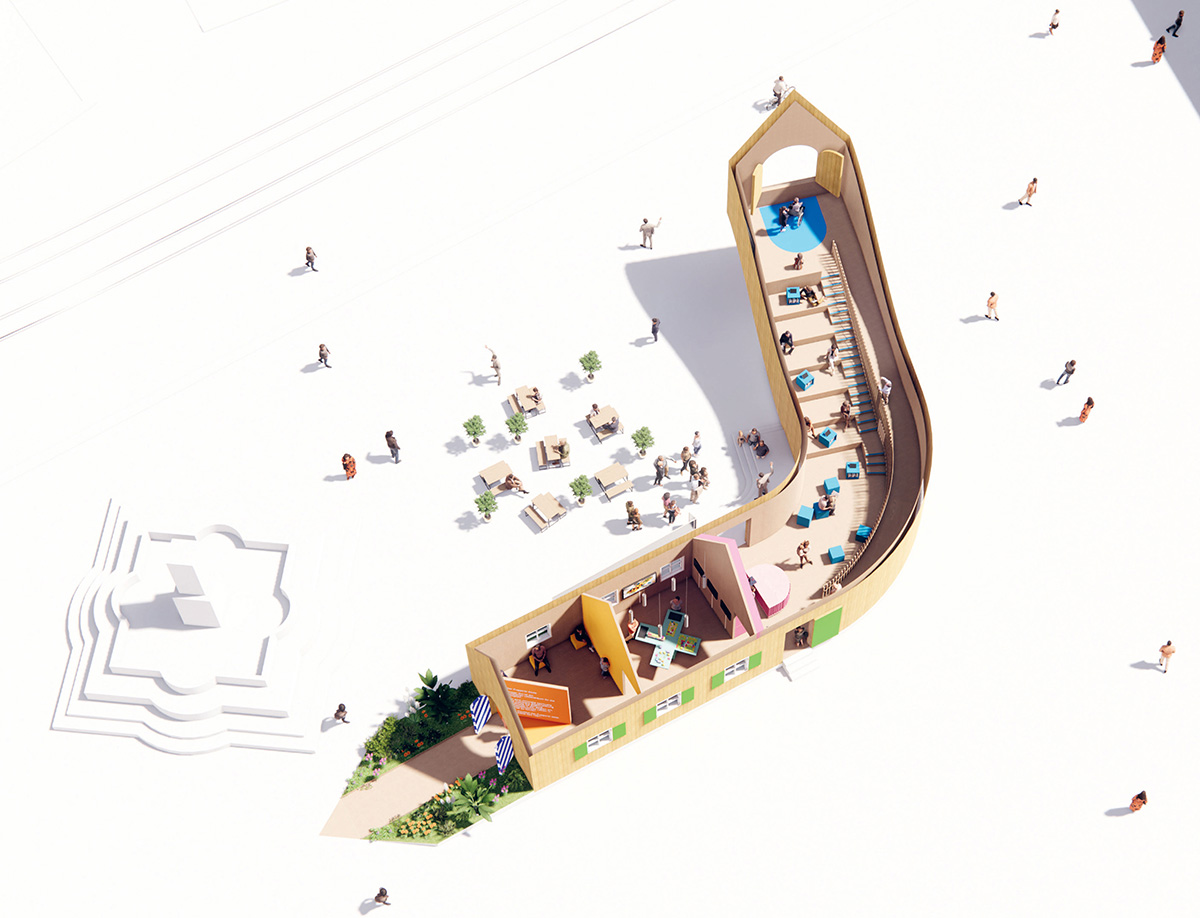 The pavilion can be visited until June 12, 2022. In addition to a pavilion and an exhibition, MVRDV's research also resulted in a 191-page book, “Fuggerei of the Future”.