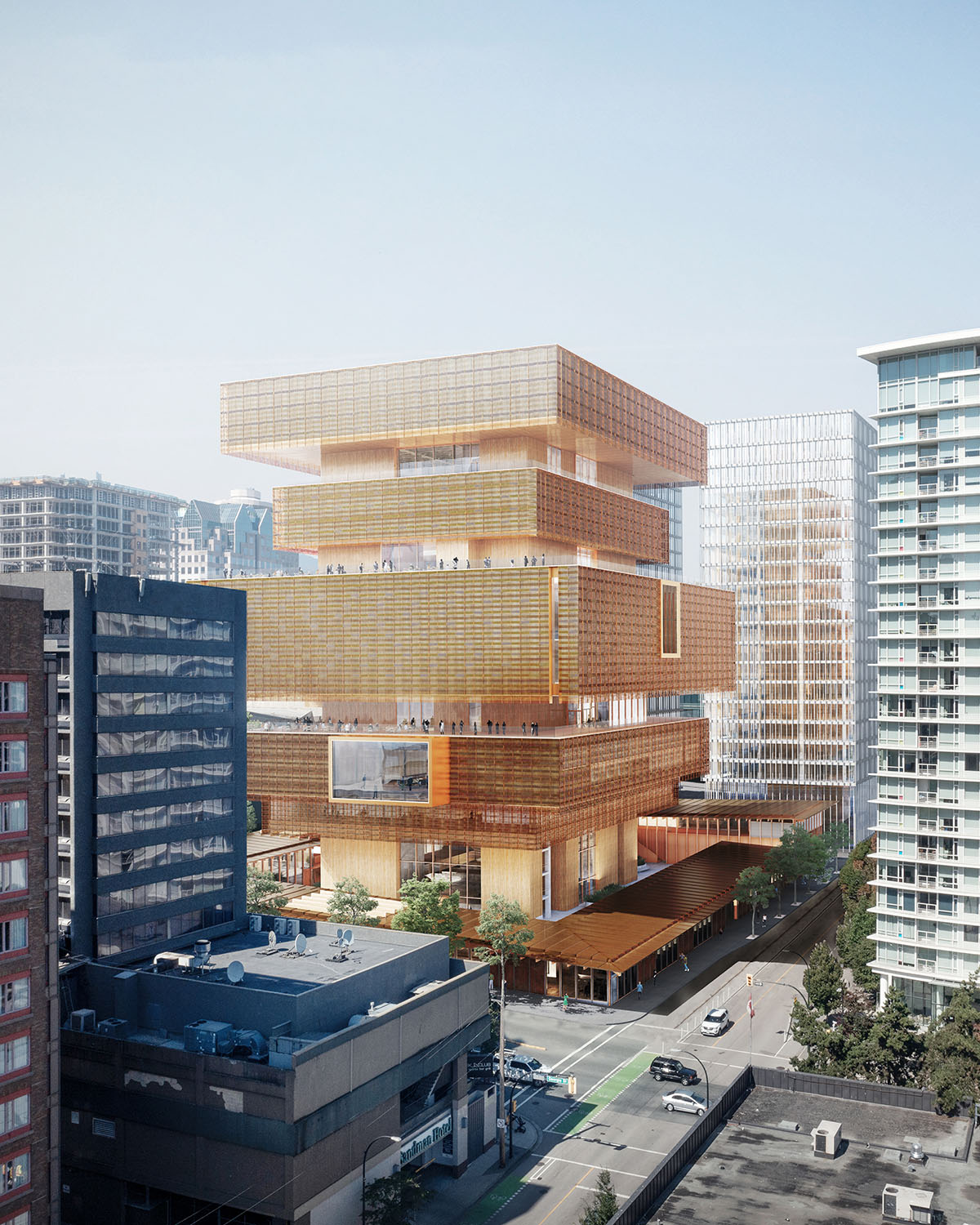 The revised version of plans have been released with a historic $100 Million gift announcement received from the Audain Foundation, to support the creation of a new building in downtown Vancouver.

According to a statement by the Vancouver Art Gallery, this gift comes at a time when the Vancouver Art Gallery celebrates its 90th anniversary. This is the largest single cash gift to an art gallery in Canadian history. Herzog & de Meuron's new massing comprises a detailed version of massing featuring symmetrically stacked volumes that present equitable a combination of copper and wood at the same time.

The Vancouver Art Gallery at the Chan Centre for the Visual Arts will be located between Cambie and Beatty streets, with a front entrance on Georgia Street, in downtown Vancouver.

In addition, the gallery will contain an art storage, a theatre, library and research centre, artist studios, accommodation for visiting artists, and a visual arts preschool and daycare, situated around a 40,000 square foot (3,716 square meters) courtyard.

The building will also house the Institute of Asian Art, a new Centre for Art and Communication, and a multi-purpose Indigenous Community House.

"The project for the new Vancouver Art Gallery has a civic dimension which can contribute to the life and identity of the city, in which many artists from various cultural backgrounds live and work," said Simon Demeuse (Partner in Charge).

"The symmetrically stacked building therefore calls for a textured human scaled facade which makes the tall upright structure approachable. A copper-colored woven metal facade protects the wooden soffits and structural elements below; both wood and copper are equally present and visible."

"The copper skin has a veil-like quality; a texture and lightness which, like traditionally woven textiles, changes its appearance depending on the vantage point of the observer and the time of the day, creating a dynamic visual experience," Demeuse. 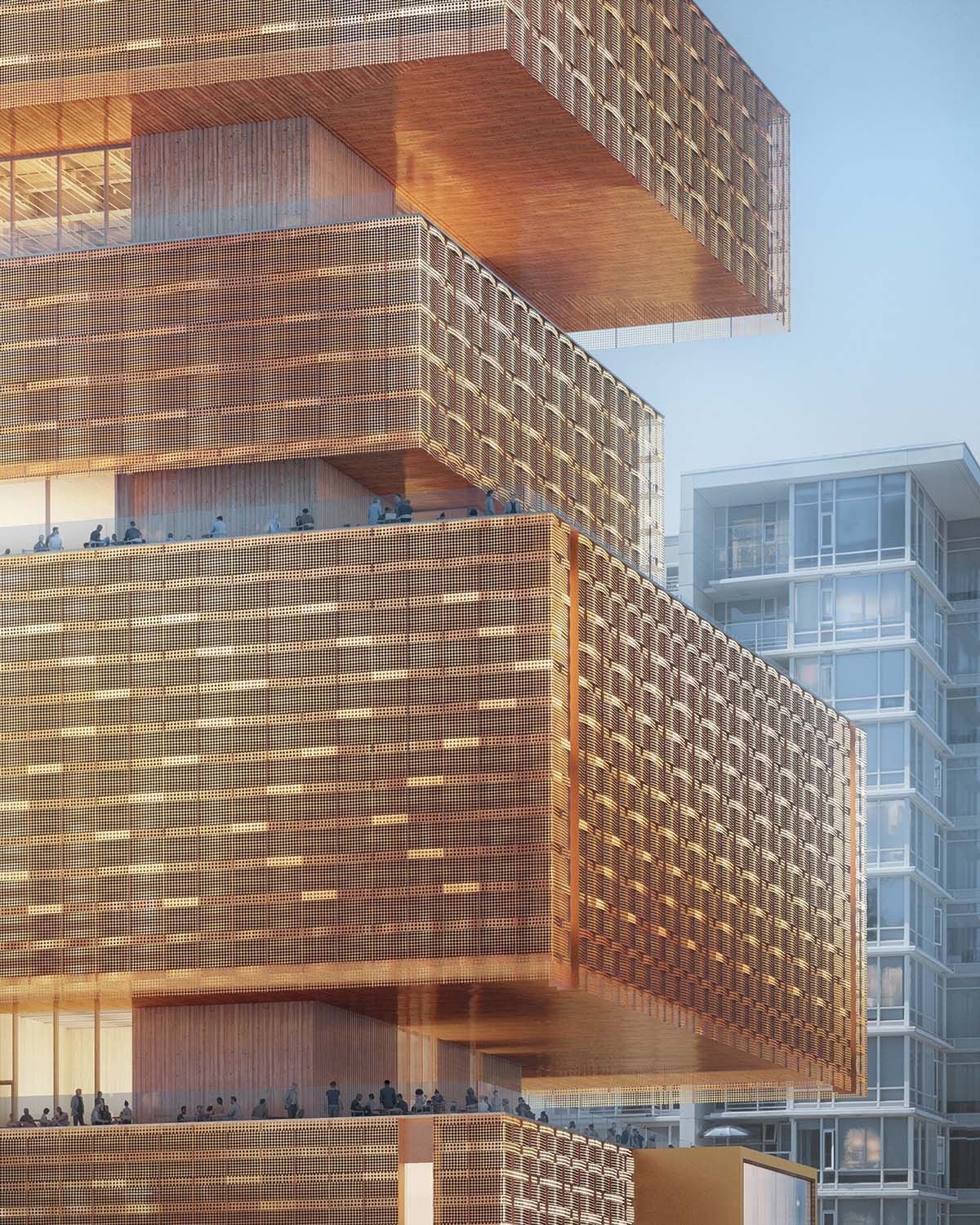 According to Herzog & de Meuron, the façade design stems from the result of a dialogue with local artists, and objects made of copper, often elaborately embossed, bent, and colored, carry a powerful message amongst many First Nations peoples of British Columbia.

Herzog & de Meuron was selected to design the Vancouver Art Gallery in 2014. The studio revealed its first conceptual plans in 2015 and revised plans in 2019.

A set of two visuals show that the visuals are elaborated with more material coherence for the building, which combines two materials harmoniously. The new Vancouver Art Gallery at the Chan Centre for the Visual Arts is designed to be a multi-functional art centre and community space – a revitalized project that embraces change.

The new Gallery will provide increased space that will support artists and the region’s cultural sector in British Columbia. The project is expected to create an estimated 3,000 construction jobs and 1,000 permanent jobs in the tourism sector.

The building is being designed by Swiss architects Herzog & de Meuron together with Vancouver architects Perkins & Will, in consultation with Coast Salish artists.

This consultation is reflected in the building’s design and its use of sustainable practices. The new Gallery will be the first Passive House art gallery in North America, a voluntary standard for energy efficiency which significantly reduces the building's ecological footprint.

"Important art has been created on this coast for thousands of years, while today Vancouver’s visual artists are recognized for their accomplishments around the world. Yoshi and I are happy to help build a new Vancouver Art Gallery because we love British Columbia and our artists," said Michael Audain, Chairman of the Audain Foundation.

"We hope the splendid new building will work well to exhibit the work of our leading artists as well as introduce youngsters to the wonders of art. Vancouver has been good to our family, so we are thrilled to have this opportunity to join the City of Vancouver, the BC Government, the Chan family, and many other generous donors in making this important project a reality."

The Vancouver Art Gallery was founded in 1931 and is recognized as one of North America’s most innovative visual arts institutions. The Gallery’s ground-breaking exhibitions, extensive public programs, and emphasis on advancing scholarship all focus on historical and contemporary art from British Columbia and around the world.

The project has also received a $ 40-million donation by the Chan family.