Cities, regions and other sub-nationals have urged nations to embrace multilevel collaboration as the new normal in the upcoming decade for ambitious climate action at COP26 Climate Conference, the annual conference is addressing today's particular urgencies of climate change in Glasgow.

The 2021 COP26 climate conference is being held from 31 October to 12 November, 2021 at SEC Centre in Glasgow. This year's conference will particularly have a dedicated day at reducing carbon emissions which is a crucial fact for all sectors in built environment.

At a press conference convened yesterday by ICLEI - Local Governments for Sustainability, the speakers have urged all city leaders and subnationals to deliver a multilevel collaboration action to cope with the climate urgency.

The video record of the press conference can be watched here. Held in the Blue Zone of COP26, local, regional and government representatives called for a new phase where multilevel collaborative action becomes the new normal. 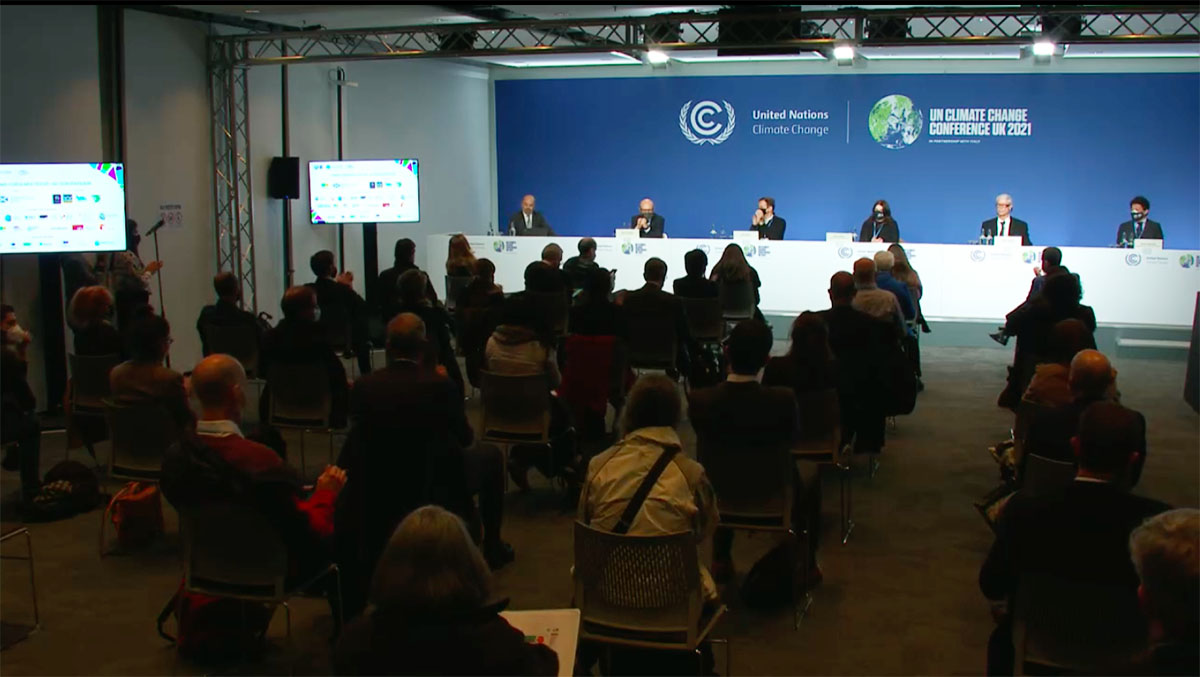 From the press conference in the action zone and globe at the Hydro, Glasgow. Image via video screenshot

At the conference, the leaders emphasized the efforts of cities and regions to deliver on ambitious climate action plan, especially in working across all levels of government.

It said: "Of the second round of Nationally Determined Contributions (NDCs), only 80 countries have so far been found to be more ambitious than the first round."

"They all have something in common: Countries with more ambitious climate goals seized the opportunity of engaging all levels of governments." 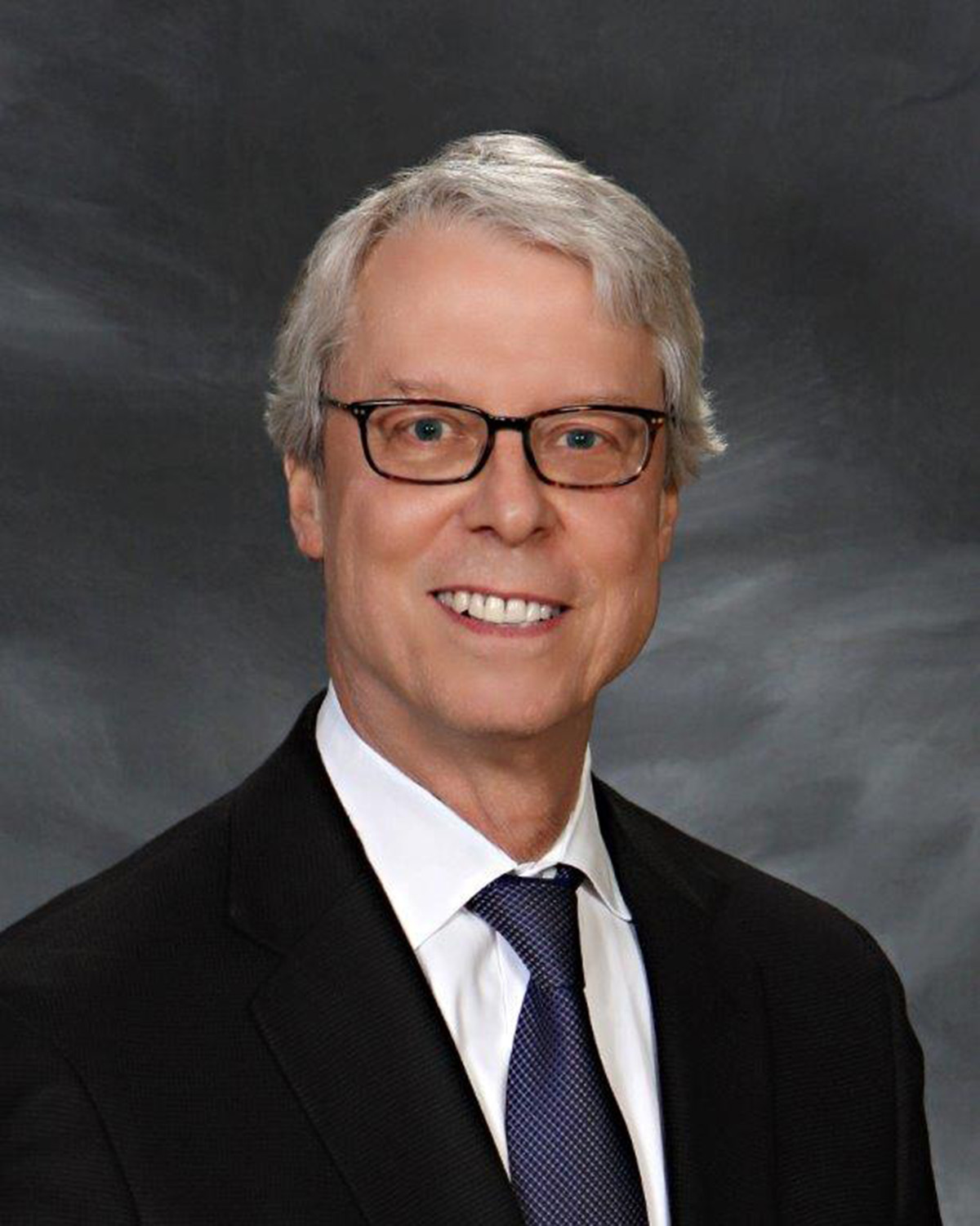 The US is one such nation. "We are very excited to see the Biden Administration step up and say that not only are they in, but they are willing to work in a multilevel fashion for all of us to succeed in this," said Frank Cownie, Mayor, Des Moines, US and ICLEI President.

"And I think that this really excites us, that we can make progress, that from the national level, to the state level, to the county level to the local level, we're all in this."

"We all see the opportunity. We need to share our best practices, we need to declare a climate emergency at all levels," Cownie added.

The press conference included the announcement of LGMA Glasgow Time4MultilevelAction Roadmap: Implementing multilevel action in the age of climate emergency, and the two-week agenda of the Multilevel Action Pavilion at COP26 Blue Zone, hosted by the Scottish Government and convened by ICLEI. 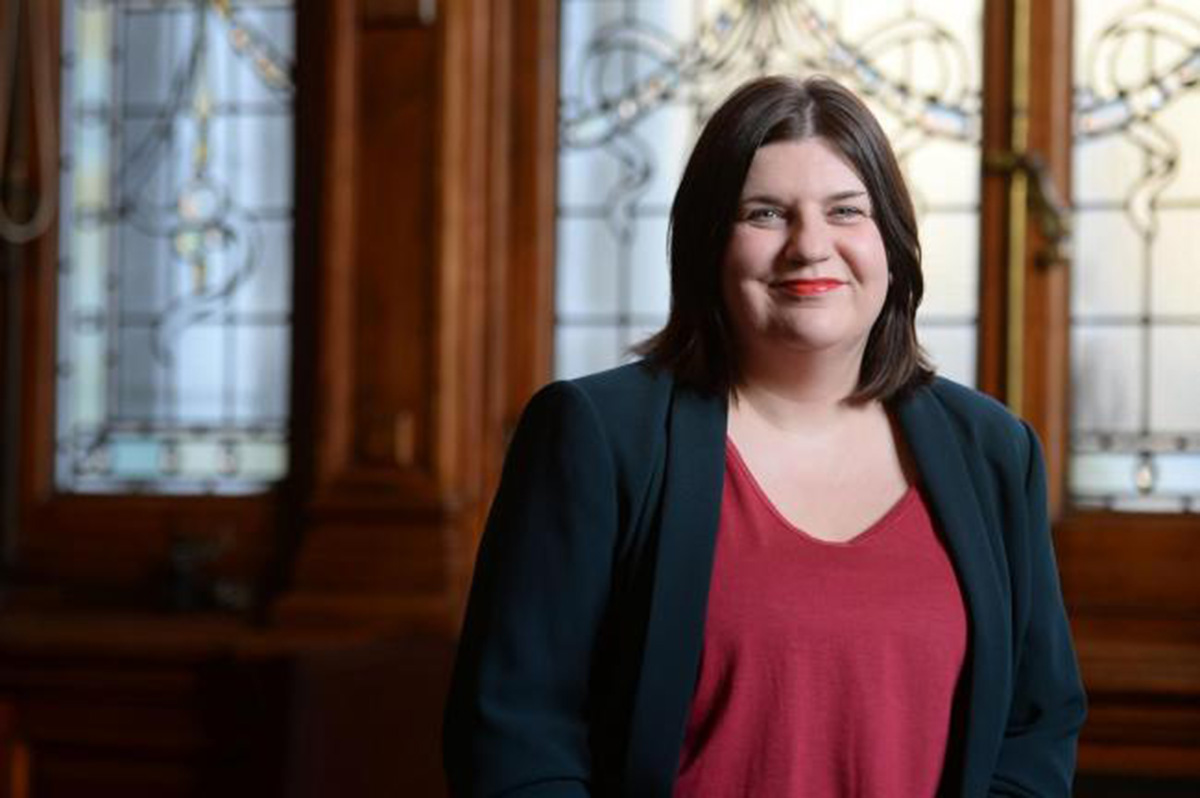 "Cities need to approach climate action in an inclusive way"

The conference specifically emphasized that cities need to approach climate action in an inclusive way.

Susan Aitken, Council Leader, Glasgow City Council, Scotland, UK, emphasized that her government is learning from history to transition her city in a just and equitable way.

"True leadership is bringing our citizens along with us on every step of the journey, and helping them to understand why bold actions, which are sometimes taking place at a pace and a scale that we've never really done before, why it's so relevant to their everyday lives," said Susan Aitken.

"And that is absolutely true of leadership, whether it's at a city level here in Glasgow, whether it's Scottish, or at the supranational level across the United Kingdom."

"It's about identifying solutions, but also ensuring that we've got partnerships and collaborations in place to deliver those solutions. None of us are going to be able to do this on our own," Aitken added.

"We have come to the COP26 to honour the commitments made by Brazil in the Paris Agreement in 2015. I am Sao Paulo’s former Mayor, and am well aware of the challenges of sustainable development in cities adjusting economic growth, with job creation, income distribution, and access for the most vulnerable to urban public goods and services," said Joao Doria.

"Now, as a governor of the state of San Paolo, I participate in the movement of subnational governments. We are 10 governors right now here in the COP26, and Sao Paulo reaffirms its leadership position in the face of global warming challenges and announces an ambitious agenda to come back to climate change with our common and shared responsibilities," Doria continued. 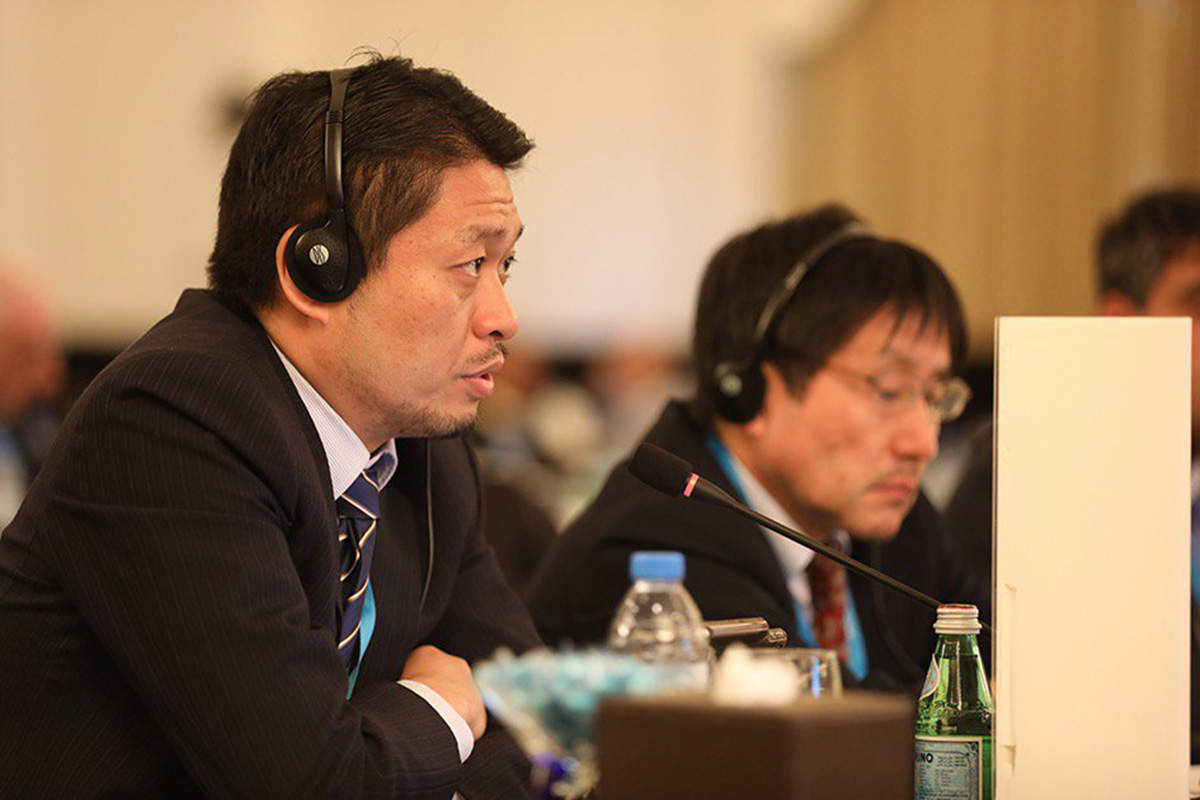 "Working regionally can accelerate the path towards climate neutrality"

The national government of Japan emphasized that working regionally can accelerate the path towards climate neutrality.

"We announced a commitment of carbon neutrality by 2050. But 90% of the Japanese local governments have already committed to become a zero carbon city by 2050 - on their own," said Ryuzo Sugimoto at the conference.

"Now, we cannot wait for regional carbon neutrality until 2050."

"Rather, we have to create a carbon neutrality region much faster and replicate them, in a so-called decarbonization domino effect," Sugimoto added.

The press conference also recognized that the first day of COP26 fell on World Cities Day, which is an international day organized by UN-Habitat.

"-Habitat supports member states in enhancing the urban dimension of the NDCs. We also work directly with cities to build capacities for a zero carbon resilient and socially inclusive, urban future. We support the goal of multilevel governance for climate action, in particular the role that cities, towns and local governments play," said Bernard Barth, Human Settlements Officer, UN-Habitat.

"World Cities Day may fall on the start of COP26 more by coincidence then by design, but we hope that this is a good omen for elevating sustainable urbanisation as a pillar for achieving the goals of the Paris Agreement."

Local and regional governments must be taken on board

Other leaders weighed in on the criticality of local and regional governments in the UNFCCC processes and global climate goals.

"The world is simply off track to avert the climate emergency. Subnational governments’ climate commitments must be taken on board in the Nationally Determined Contributions, and they must be given a formal seat in the UNFCCC negotiations. I call on the UN, the EU and all national governments to ensure the regional and local dimension is included in the COP26 conclusions," said Apostolos Tzitzikostas (EL/EPP), President of the European Committee of the Regions (CoR), Governor of Central Macedonia Region, Greece and Greek Ambassador of the Covenant of Mayors.

"We can no longer afford to ignore the fundamental role of every region, city and village in delivering climate action, or we will continue to fail our young people and our planet," added Tzitzikostas. 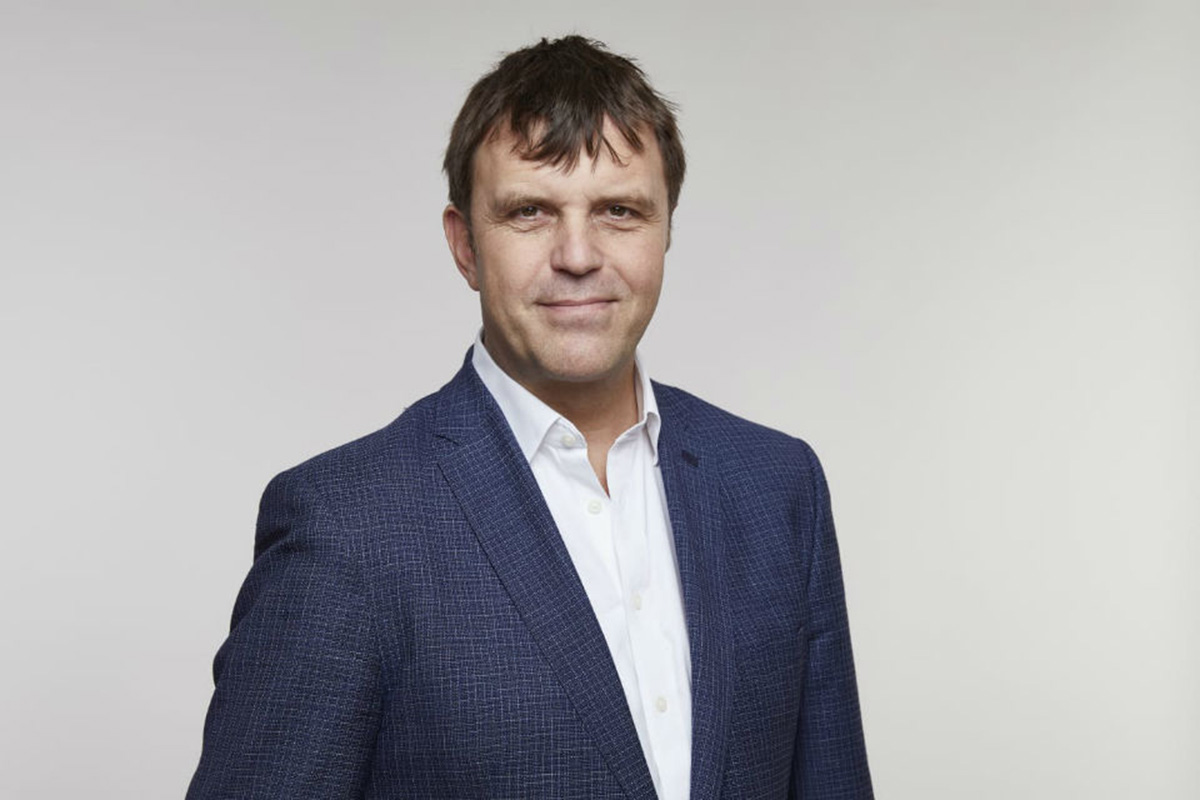 "Over one thousand cities have committed to more ambitious climate actions through the Race to Zero, but they all need collaboration with national and global partners to fully deliver on these commitments," said Nigel Topping, High Level Champion for Climate Action, COP26, UNFCCC.

"At the same time, the most ambitious national governments know that they cannot deliver on the Paris agreement without multilevel partnership."

"We applaud all those governments - national and subnational - that are already showing that the way forward through this crisis is through meaningful and impactful collaboration," Topping added.

The 26th annual summit – giving it the name COP26, is taking place at SEC Centre in Glasgow, with the UK as President from 31 October to 12 November, 2021.

The conference will welcome more than 190 world leaders and tens of thousands of negotiators, government representatives, businesses and citizens will join them for 12 days of talks.

Top image © The action zone and globe at the Hydro, Glasgow. Photograph by Alan Harvey/UK Government, courtesy of COP26.