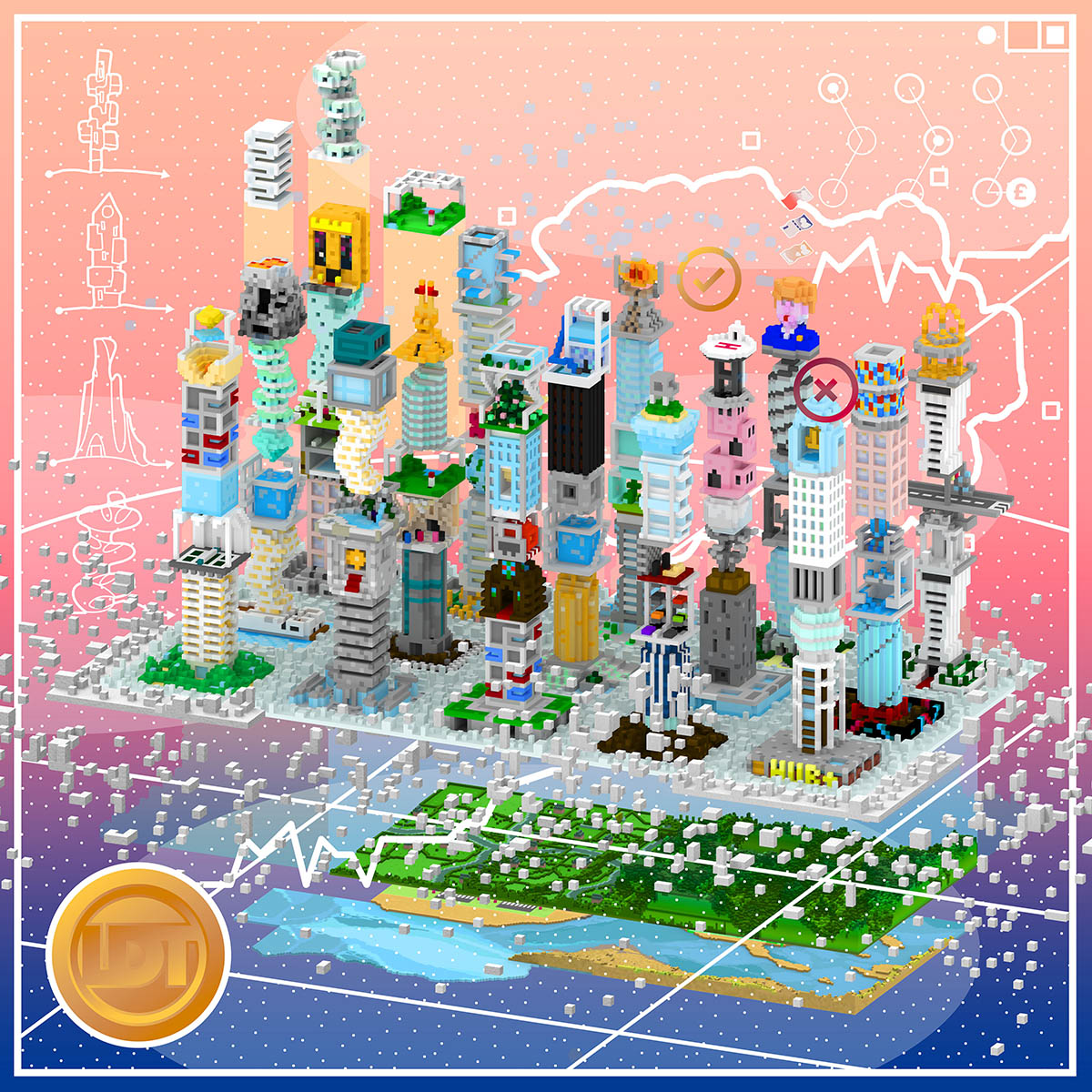 We are all familiar with the classic architecture games, from building blocks that become daring structures to board games where the players compete for spatial-strategic advantages. What are, though, the architecture narratives invested in doll's houses, along which guidelines do cities grow in computer games, and what kind of buildings shield ego-shooters from their assailants?

The exhibition, entitled Serious Fun, shows and examines architecture games and toys, inviting you to be astonished, to play and to reflect at the Architekturzentrum Wien, Vienna, Austria.

Serious Fun will open to the public on 17 March and will be on view until 5 September, 2022 at Exhibition Hall 2 of the Architekturzentrum Wien. 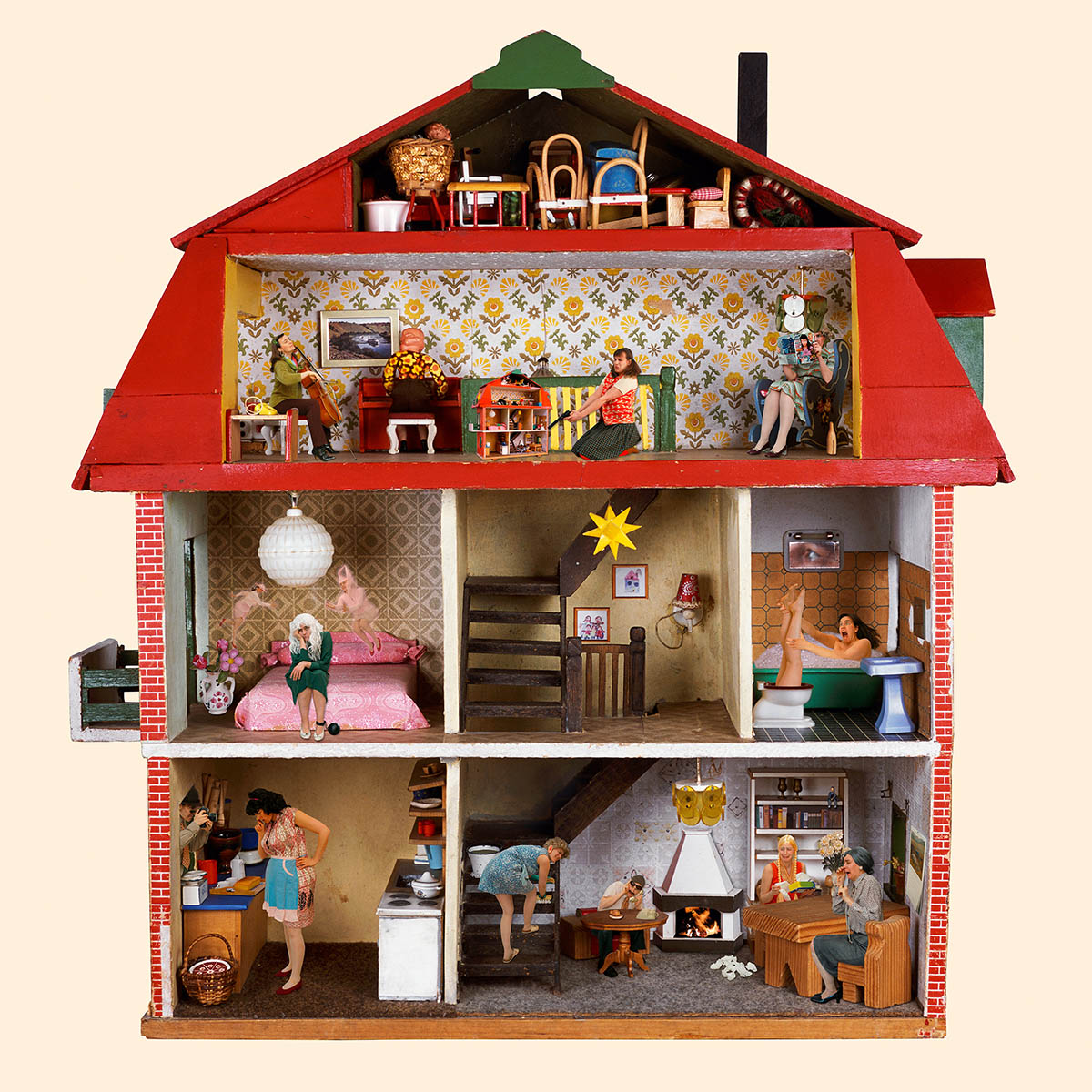 MaerchenHaft. German artist Sabine Bloch constructs complex relationship spaces in her montages, which are based on photographs. For the series “MärchenHaft” she stages the montages in doll's houses. Image © MaerchenHaft, Sabine Bloch, photoartist, 2005–2006

Architecture games and toys are a part of our cultural and technical heritage. They come made of wood, metal or cardboard, others are played on computers or consoles. Hybrid variations turn the city itself into a gameboard, creating an interface to parallel worlds. These games and toys are a part of social history, too. As a deeply expressive form of popular culture, they convey how we perceive our built environment and different ways of imagining it. Unlike representations with images, which we view from a distance, games can develop a strongly immersive character: Whoever participates in a game becomes part of it himself. This captivating power is not without ambivalence. 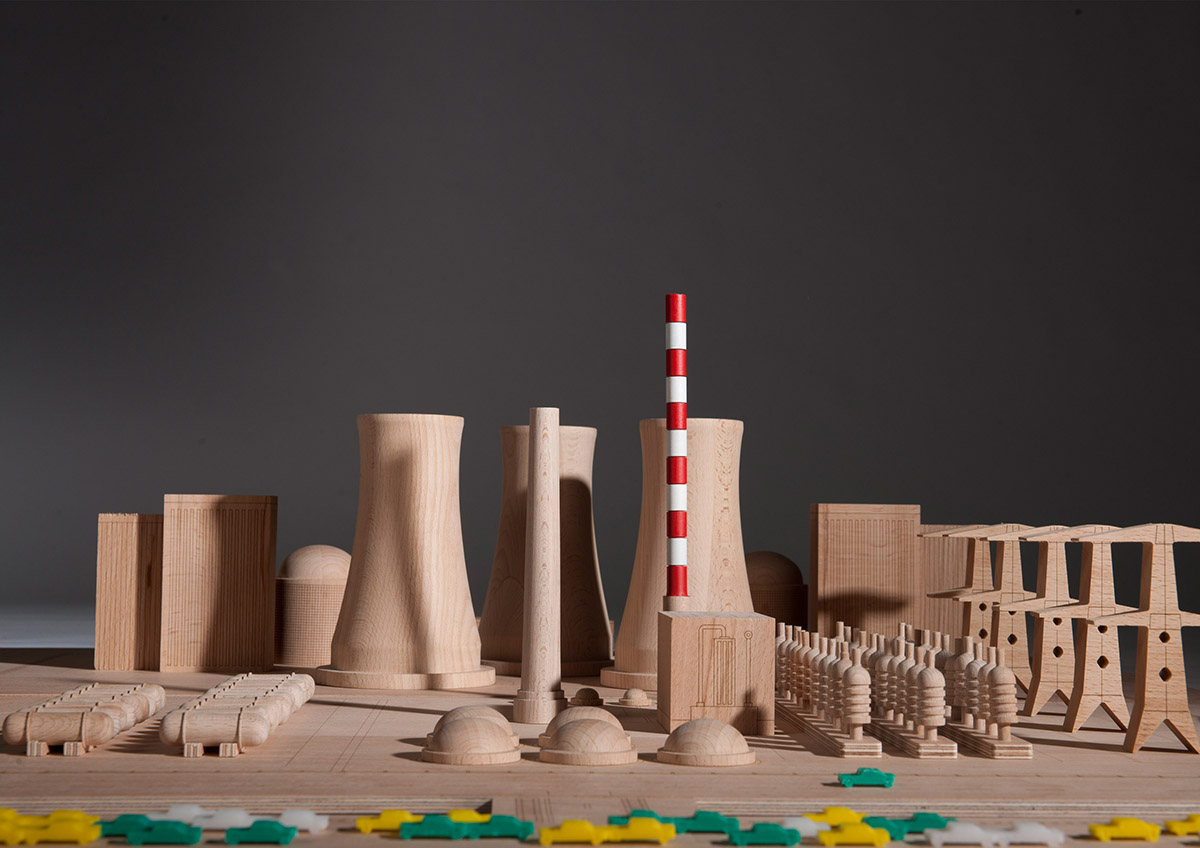 Critical Blocks. A mega farm, a power plant and a highway as toy blocks. For the designer Maykel Roovers these embody essential elements of contemporary architecture and spatial planning. Large scale architecture is rendered abstract with building blocks, emphasising the contrast between the harshness of these urban planning measures and the playful illusory children's world of unlimited possibilities. Image © Critical Blocks, Maykel Roovers, 2012

On the one hand, the miniature scale is inviting, so people can actively participate in the development of buildings, towns or situations that they would never otherwise have had any access to in reality — which has made games popular as a tool in participatory processes. On the other hand, it is the developers who influence or manipulate the course and outcome of the games. Their decisions not only build whole worlds, they also shape world views. Luisterhuis. The "Listening House" by architect Machiel Spaan and composer Rozalie Hirs is a doll's house that children with and without disabilities can play with together. The house-shaped wooden sculpture has seven cavities that can be explored with the ears. Image © Luisterhuis, Machiel Spaan & Rozalie Hirs, 2017, Photograph: Allard van der Hoek

The exhibition presents games and reflections on games. The exhibits, many of which are interactive, were created by architects, artists and game developers. The visitor's gaze is frequently drawn to specific, sometimes strange but frequently innovative aspects of architecture games.

What are the utopias and dystopias that they evoke, what are the values and ideas they convey, criticise or endorse? What kind of places, themes and ways of life are frequently left out, and which games fill these gaps? Visitors can take an alternative city tour through a videogame environment, they can dabble on the virtual London property market, experience doll's houses as lurid minidramas or emancipatory narratives, stimulate the spatial experience of a blind person in a purely acoustic videogame, or develop eco-friendly city districts in collaboration with others. 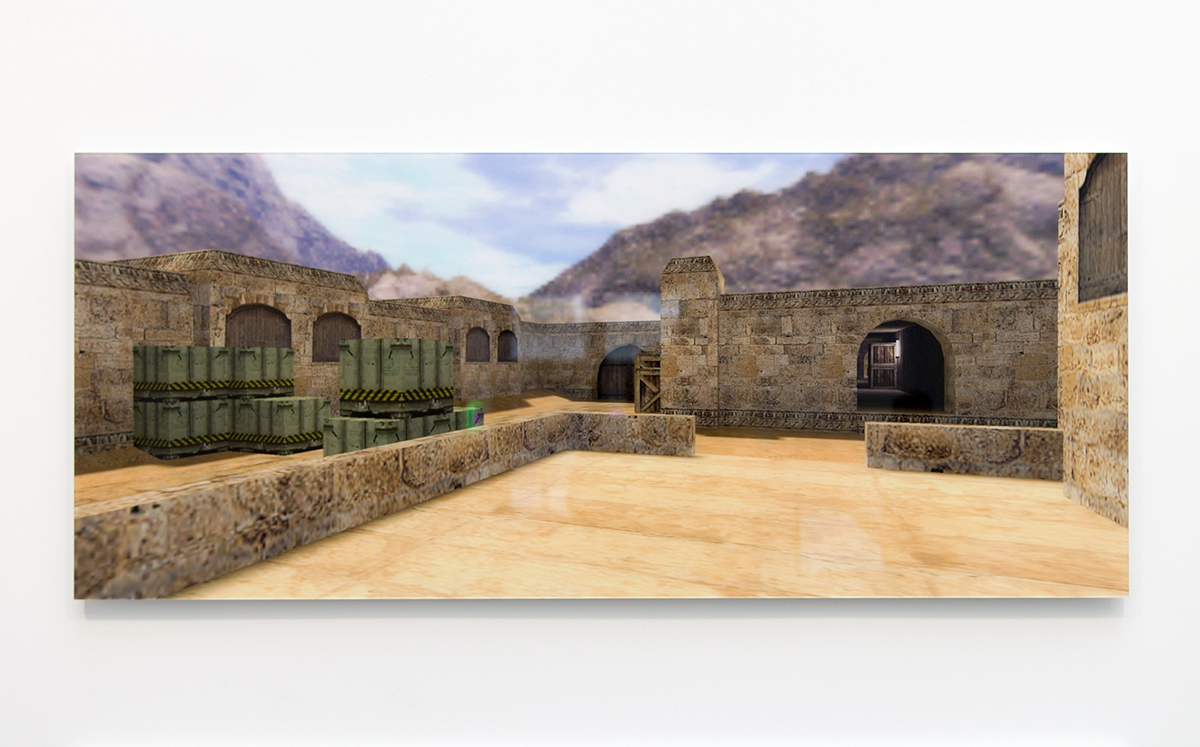 Dust, 2011. “Dust” is a copy of one of the most popular video games in the world on a scale of 1:333. In contrast to contemporary video games (with their endless worlds), the gaming spaces of the 1990s were still limited by the performance of the graphic cards and processors of the time. A computer game map like de_dust looks more convincing than many other settings, such as artificial looking supermarkets or airports. Image © Dust, Aram Bartholl, 2011

The exhibition 'Serious Fun' invites visitors to play and to ponder. It provides an opportunity to become immersed in both familiar and in less familiar games, while it also encourages people to take a step back and to take a critical look at the world of games and the constructed worlds that they create. Games can both celebrate and trivialise architecture, they can delimit and they can delimit whole worlds. They do not only integrate architectural practice, they also hold a mirror up to it. 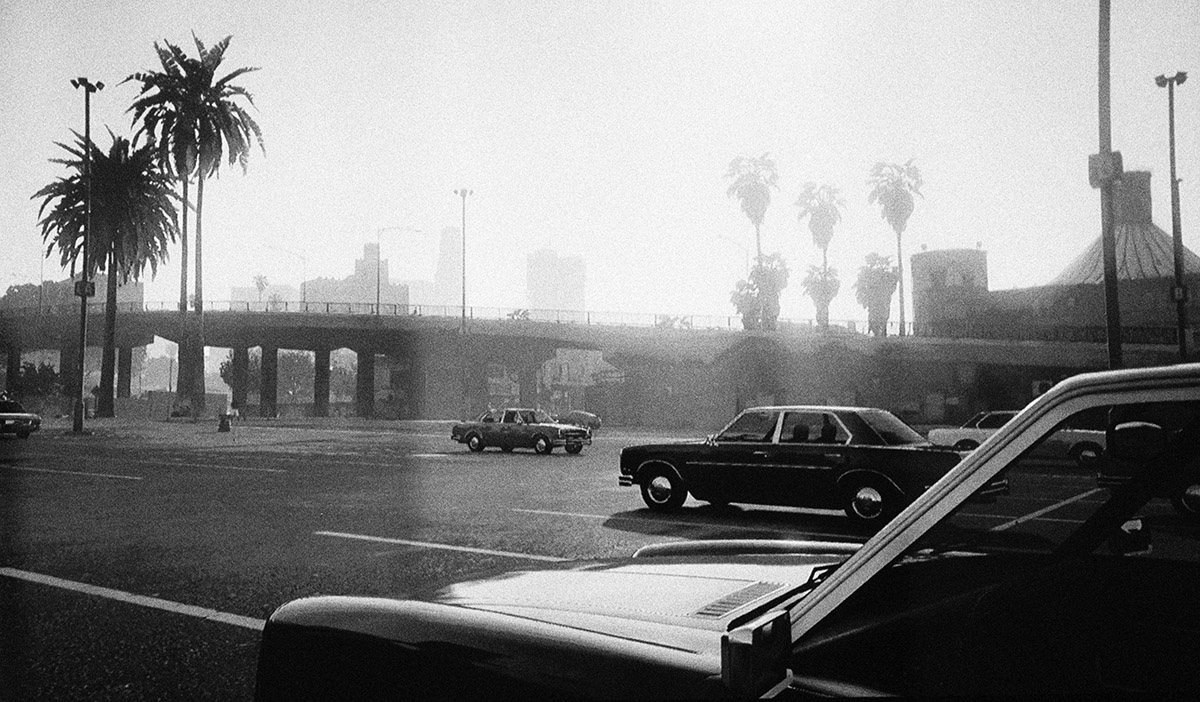 Excerpt from “The Continuous City”, 2018. British artist and game designer Gareth Damian Martin has been researching video game scenarios and taking photographs of projections of scenes with an analogue 35mm camera. The resulting images move between reality and fiction, between digital and the analogue realms. They show the capacity of video games to create worlds that have absorbed real and existing architecture. Image © Excerpt from "The Continuous City", Gareth Damian Martin, 2018 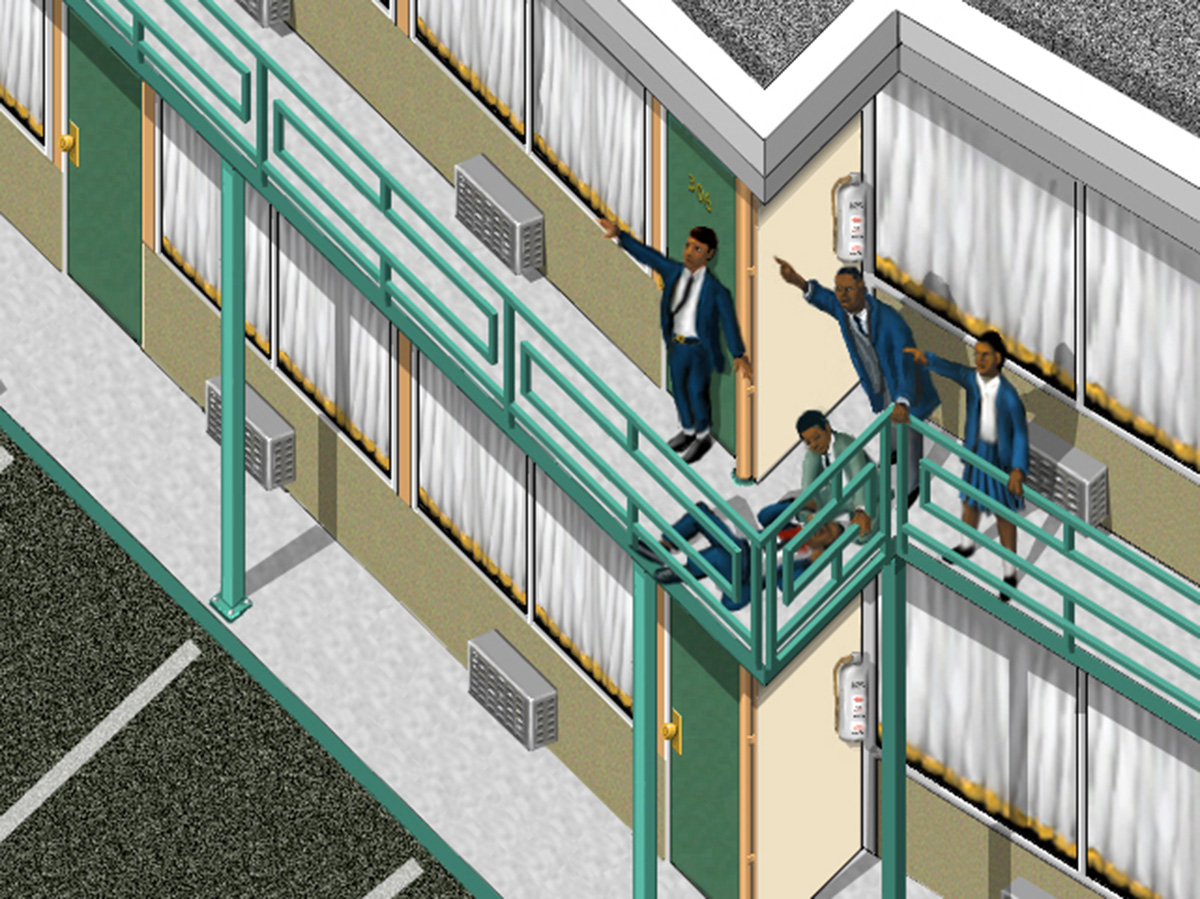 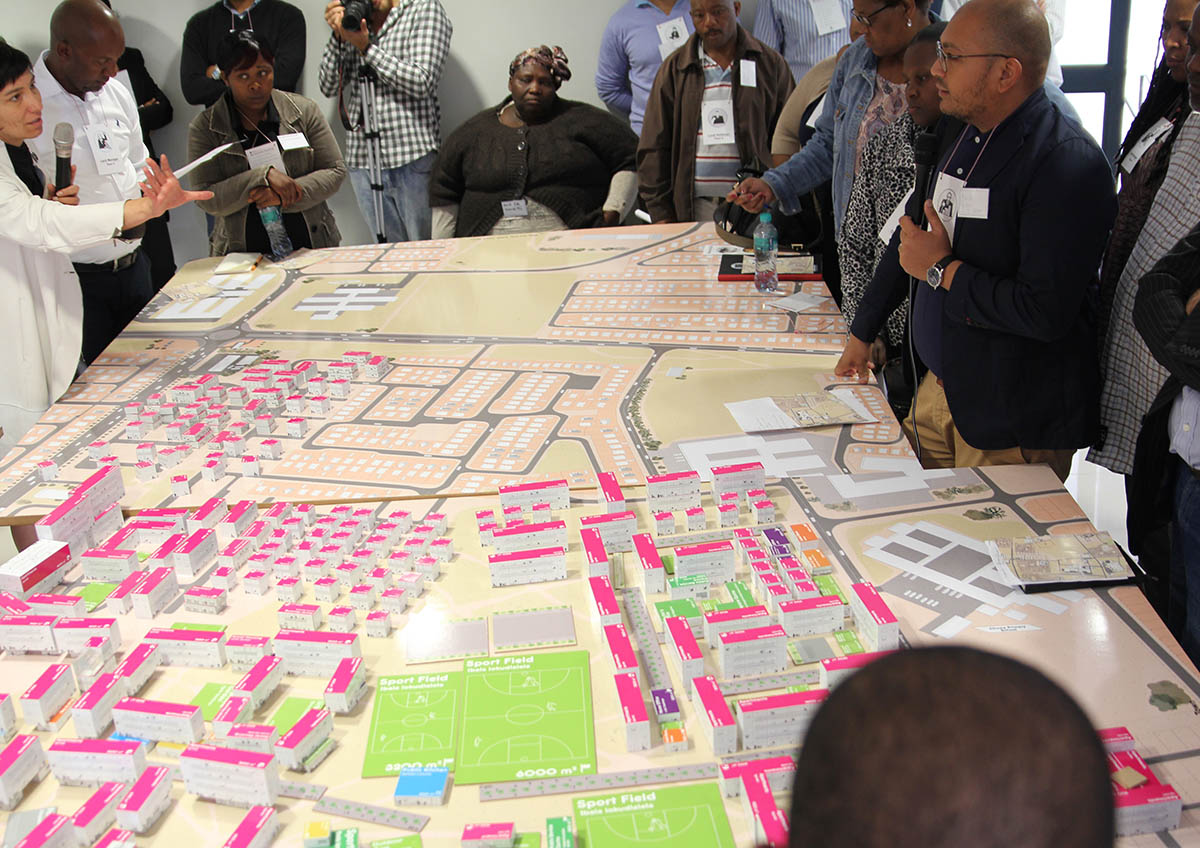 Play the City. The "Play the City" office in Amsterdam, run by Ekim Tan, was very early to specialise in the development of games to promote participative processes in the urban development sector, and has at its disposal a massive collection of specially made building blocks. Image © Play the City, courtesy of Play the City

Top image: London Developers Toolkit. The satirical App explores the burgeoning skyline of phallic-looking residential towers across London. It challenges users to assemble their own megalomaniac skyscraper from prefabricated iconic pieces and create garish advertising to accompany it that can subsequently be printed out. Image © London Developers Toolkit, You+Pea, 2015