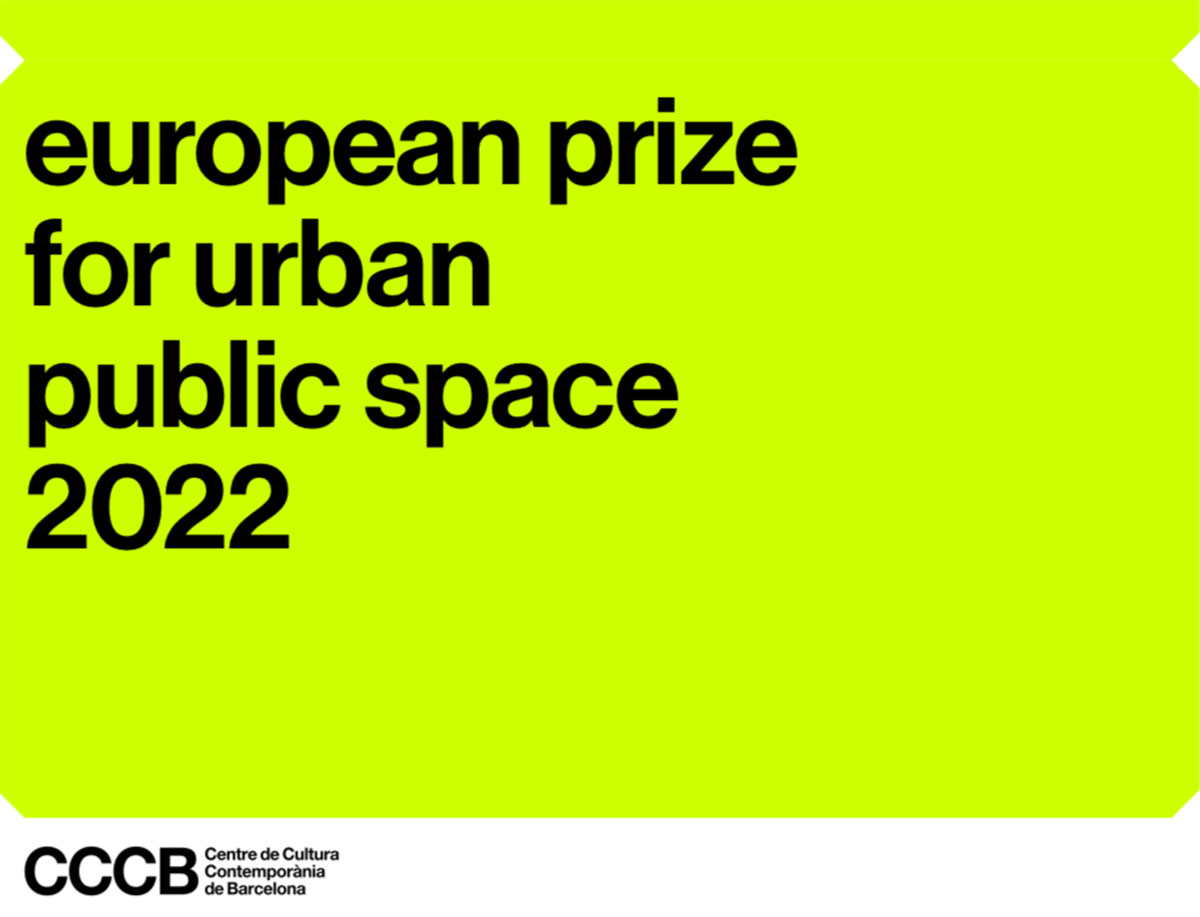 The European Prize for Urban Public Space has opened a new call for entries of public space works from around Europe and completed between 2018 and 2021.

The European Prize for Urban Public Space is an initiative of the Center of Contemporary Culture of Barcelona (CCCB) which, since 2000 and on a biennial basis, recognizes the best interventions of creation and transformation in the public spaces of European cities.

The Prize has an honorary nature, is awarded jointly to the authors and promoters of works carried out in the 47 countries that make up the Council of Europe and gives the maximum dissemination to the selected works through the network of European collaborators and partners of the project.

The Prize offers a unique perspective on European cities and aims to become a space of reference to discuss the challenges of urban public space, in collaboration with experts and architectural, academic, and cultural institutions from all over the European territory.

Throughout its 22-year history and 10 editions, 2,206 works have been submitted to the Prize and 19 prizes and 35 mentions have been awarded. A selection of the best 357 works from all editions is published on the project's website (www.publicspace.org).

The European Prize for Urban Public Space has the natural space in the European city that, despite its diversity, shares some common historical elements, such as human scale, compact design and a mixed-use character. In this idea of the European city, public space plays a key role in collective encounters, loaded of political, economic and social values that are inseparable from a physical design that accommodates them and makes them possible. In this way, the Prize, from the observation of the quality of public spaces, also becomes a project that generates attention and reflection on the quality of life and the democratic quality of European cities.

The cities of Europe are facing challenges and transformations that cross the urban reality around the world. From this perspective, the Award proposes a specific look from our most immediate reality to a debate on the future of cities that is global, and that, in a progressively urbanized world, is gaining more and more importance every day. To think the European city is to think about concrete solutions that are being given today in Europe to respond to the global challenge of the urban future.

Today, the climate emergency or the crisis generated by the COVID-19 pandemic has transformed global agendas, has added more challenges to the current social problems in our cities and has become a central vector of urban thinking. Issues such as shortages, inequalities, mobility, migrations or emergencies place cities in front of challenges for which there are still no clear answers and which have a direct impact on urban design and public spaces, due to their clearly social or public function. In addition, the impact of technological transformations is an element that can also directly intervene in the urban realities of the surrounding area.

The Award aims to reflect the centrality of these issues and to become an observatory of good practices that will allow us to think of possible solutions for a future in which cities will play a key role in defining the evolution of society. It is a unique award in Europe, as it promotes a space that is both public (open and universally accessible) and urban.

After a hiatus since its last edition in 2018, the CCCB announces a new edition of the Award with the aim of valuing those works made between 2018 and 2021.

The call is open, free and takes place in two rounds. In the first round, the jury of this edition will select 25 works that will be published on the project's website and will become part of its archive. From among the 25 selected, there will be 5 finalist works that will go on to the second round.

The award ceremony and associated activities will take place over two days during the fall of 2022 at the CCCB. The authors of the works included in the second round (finalist works) will be invited to present their projects and will receive a commemorative diploma. The selected works and finalist works will be the subject of a publication with contributions from the authors and renowned critics.

The Award has an institutional network around Europe that allows to consolidate the project throughout the territory and to guarantee access to the most outstanding works of intervention in public space. These institutions of recognized prestige will support the dissemination of the Prize and will participate and promote the activities focused on public space generated by the project in the form of debates, exhibitions, and articles, among others.

The jury of the Award is made up of renowned professionals from all over Europe. The jury for this year's edition will be formed by:

The jury will consider only those entries that comply with the terms and conditions of participation established in these rules and may declare the competition void. The secretary will assist the jury and will take the minutes of the sessions during the voting process.

Only the five finalists resulting from the first round will participate in this phase. They will make a presentation in front of the jury in order to open a debate between the authors of each proposal and the members of the jury. This presentation will take place at a public event, as part of the activities to be held prior to the award ceremony of the eleventh edition of the Prize. Once the jury's deliberation has been completed, the results of the voting and the winning works (winner and mentions) will be made public.

The jury reserves the right to ask each finalist for additional information in order to properly evaluate the selection of the winners. Depending on the quality of the material included, finalists may be contacted to provide high-resolution images and further documentation.

The finalist teams will make a presentation to the jury, which should include all the material deemed necessary for a correct understanding of the work.

17 May: Closing of registration

18 July: Presentation of the finalists' works

14-16 November: 1st session: Presentation of the finalists' works in front of the jury at a públic event at the CCCB. 2nd session: Jury's final deliberation and award ceremony

For further information, please contact [email protected] of the Center of Contemporary Culture of Barcelona (CCCB), at Montalegre, 5 (08001) Barcelona.

Read more about evolution criteria, conditions of participation, selection process and other details on website.