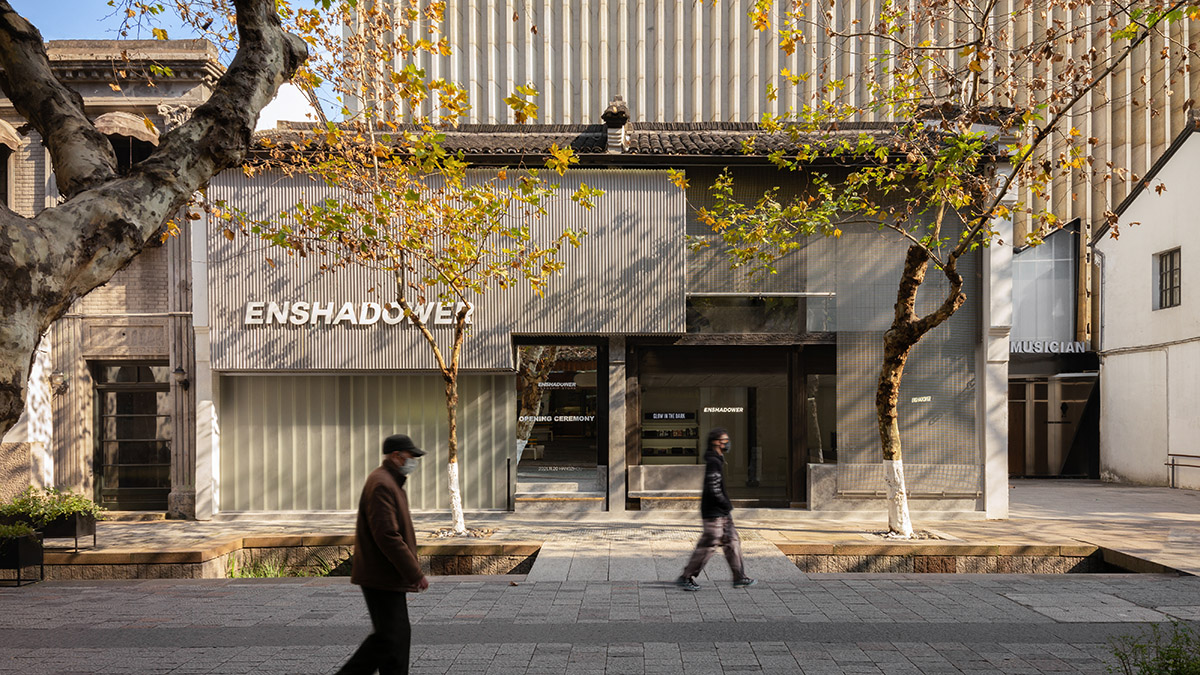 The 174-square-metre building was renovated for a clothing brand Enshadower, established in 2012 - the company is a functional clothing brand that acquired inspiration from fixed-gear bicycle sport at the earliest time in the domestic.

say architects was commissioned to design the first offline store located in Nanyu street of Hangzhou. Review the past decade, a developing golden era for both the brand and Hangzhou City.

say introduced the industrial materials used in the city's construction and starts a conversation across time between the brand and the site. 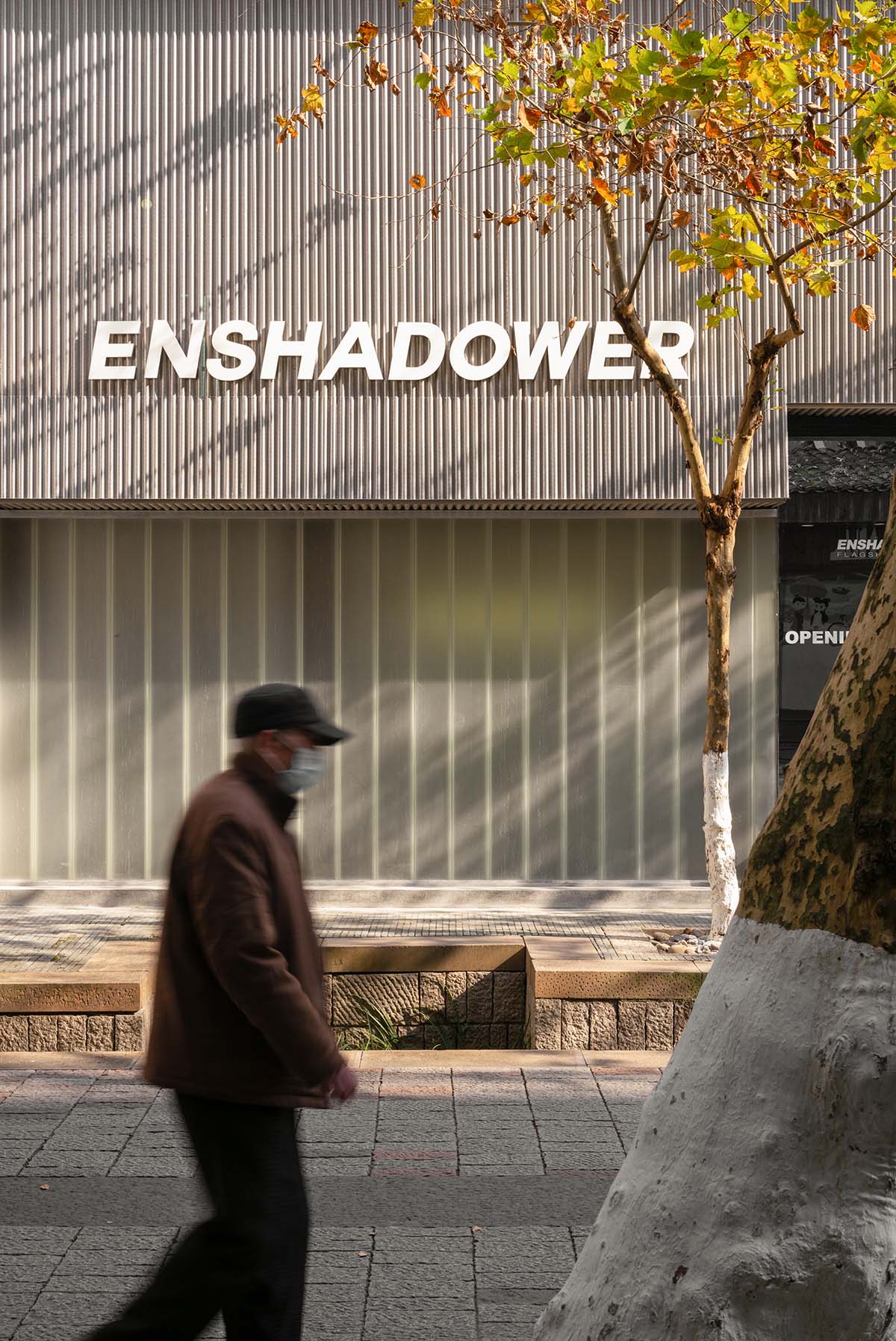 Explore the interface of Hangzhou

At the initial establishment of ENSHADOER, it focused on riding costumes of fixed-gear bicycle sport. The fixed-gear bicycle has single direction pedal, wheels and pedals are always in a fixed state, mail carriers of the city used them for delivering in the old days.

Afterwards, it developed into a fashionable sport for young people. say started the concept of cycling around the city. Say selected some common but not memorable building materials from the city texture, including concrete, channel glass,  perforated aluminium plate, rhombus aluminium net etc., and collaged them together into an attractive facade. 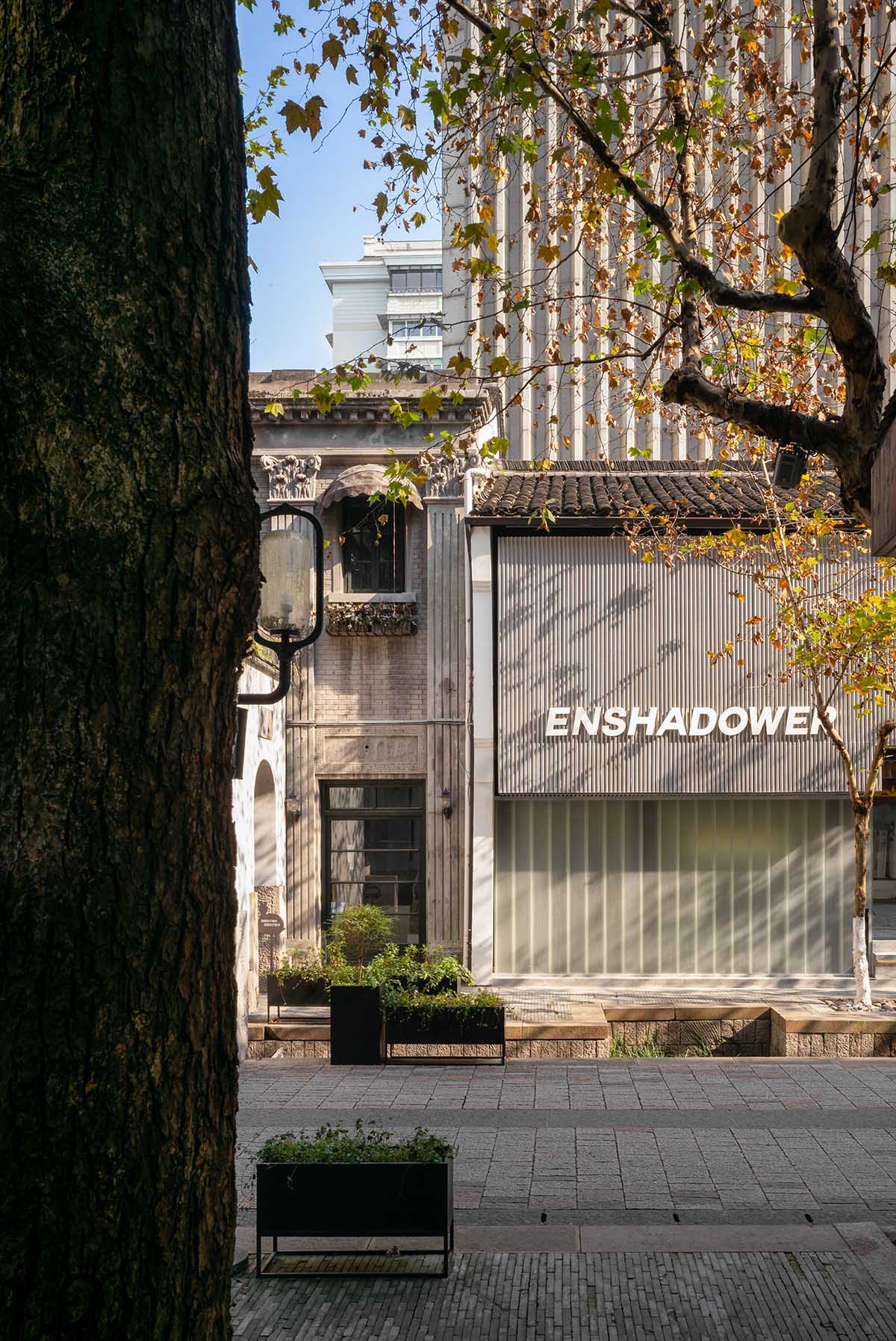 The prominent architecture is a two-floor building. The first floor is for coffee and clothing exhibition, and the second floor is a multi-functional exhibition space to cope with the demand of the brand to use the offline store.

The facades correspond to each functional program with light transmittance. 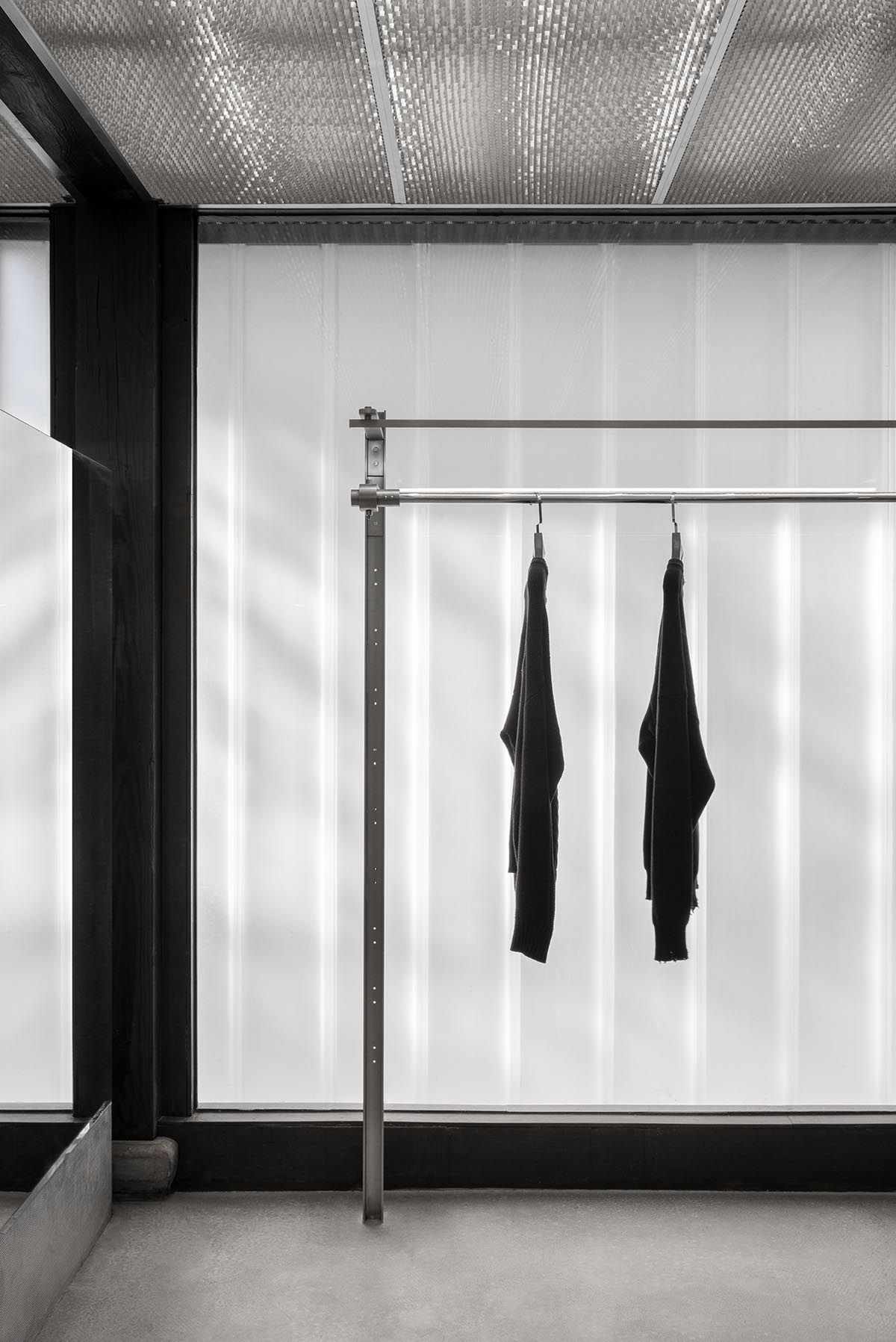 say kept the wooden structure of the original architecture, which was re-polished and painted. The single direction natural lighting reveals the beauty of texture. say used 36 aluminium honeycomb plates as suspended ceiling between the beam positions.

The light, firefighting, and HVAC equipment hide above the transparent suspended ceiling. The light evenly spreads in the exhibition hall through diffuse reflection. It seeks a kind of balance between modern and tradition. 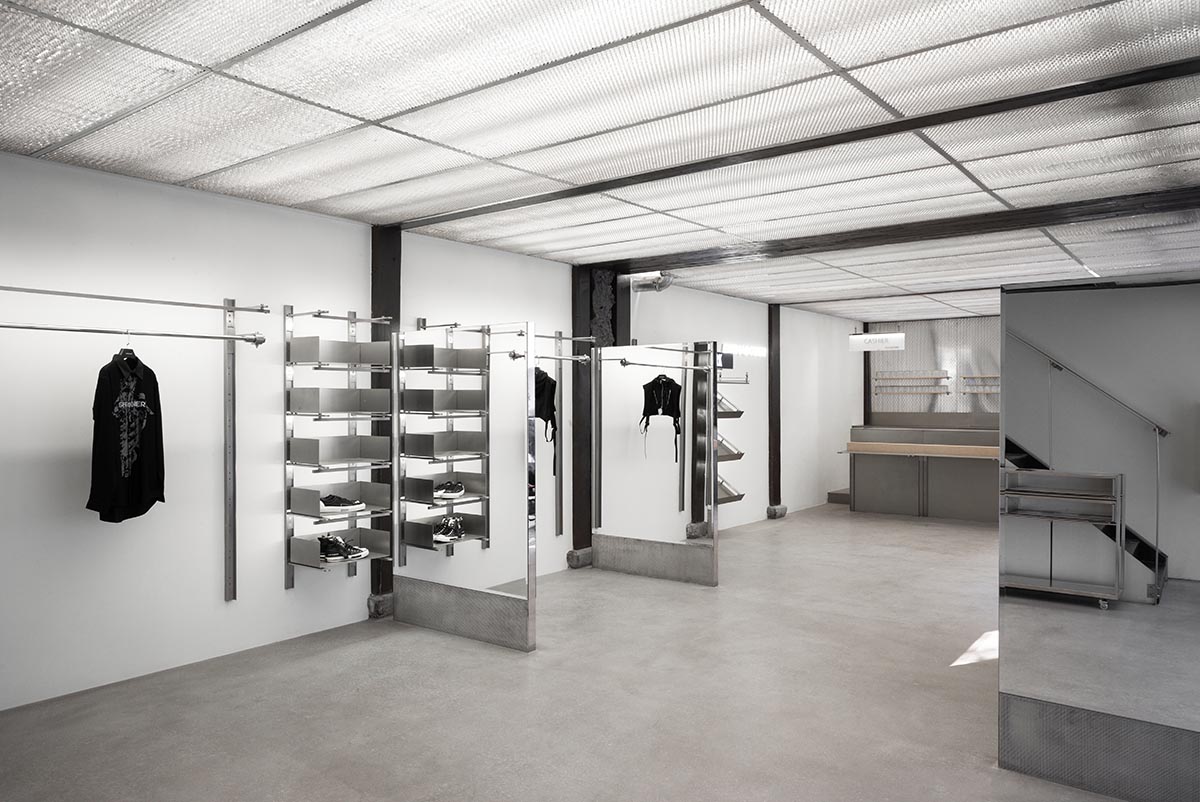 A fixed-gear bicycle has 19 parts joint. Each modularized part has powerful compatibility, which significantly increases the possibility of refit, while the designed details of the brand on the costume all manifest its seeking of functionality. say customized a set of exhibit system “twelve” for the brand, which covers functions of suspending, object placement, exhibition, lamplight etc., based on the property of the product.

The system is just composed of 12 mould available parts. Their intercombination could form tens of thousands of variable exhibition ways. Some parts could also be used as a cantilever arm of the cafe bar at the same time. 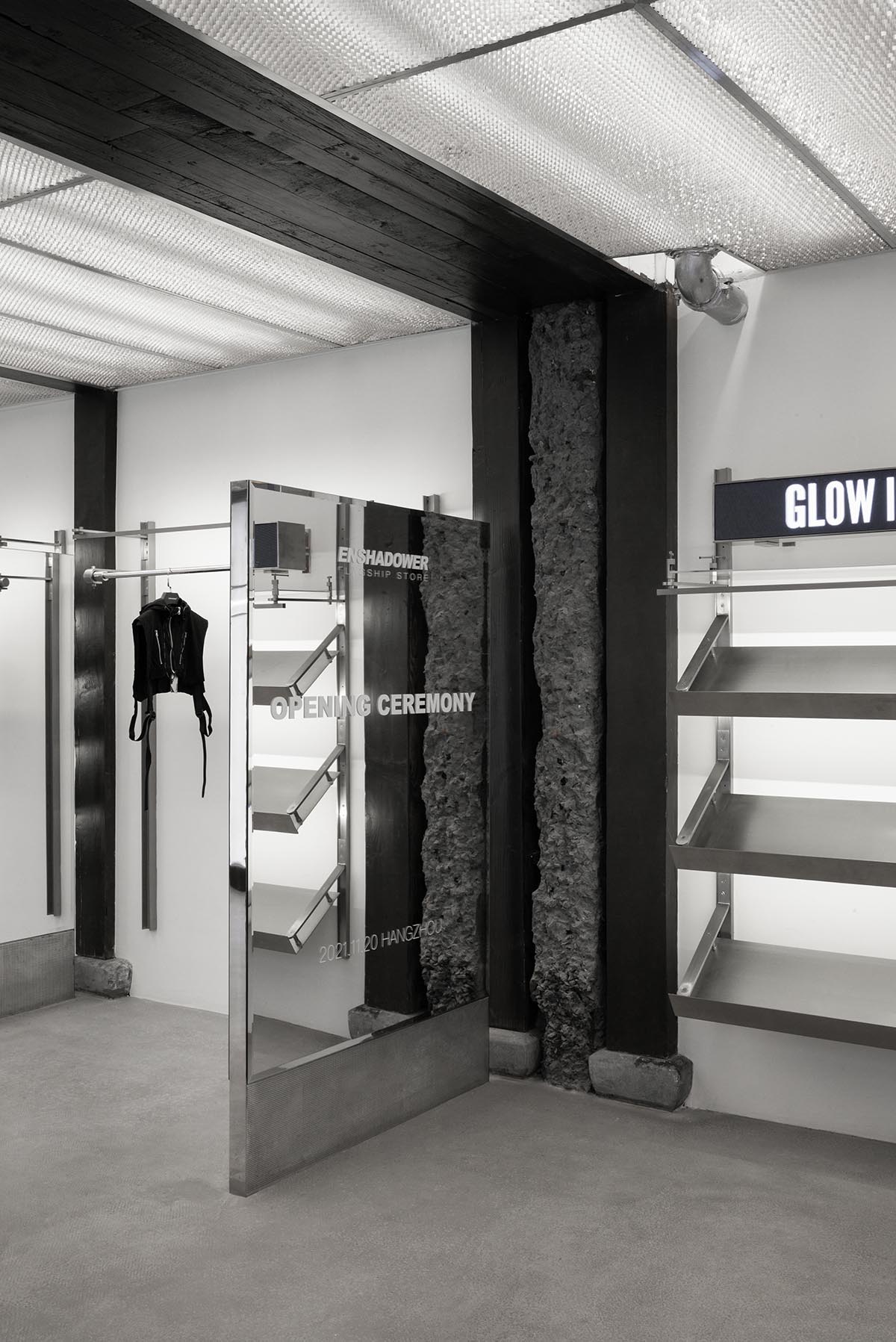 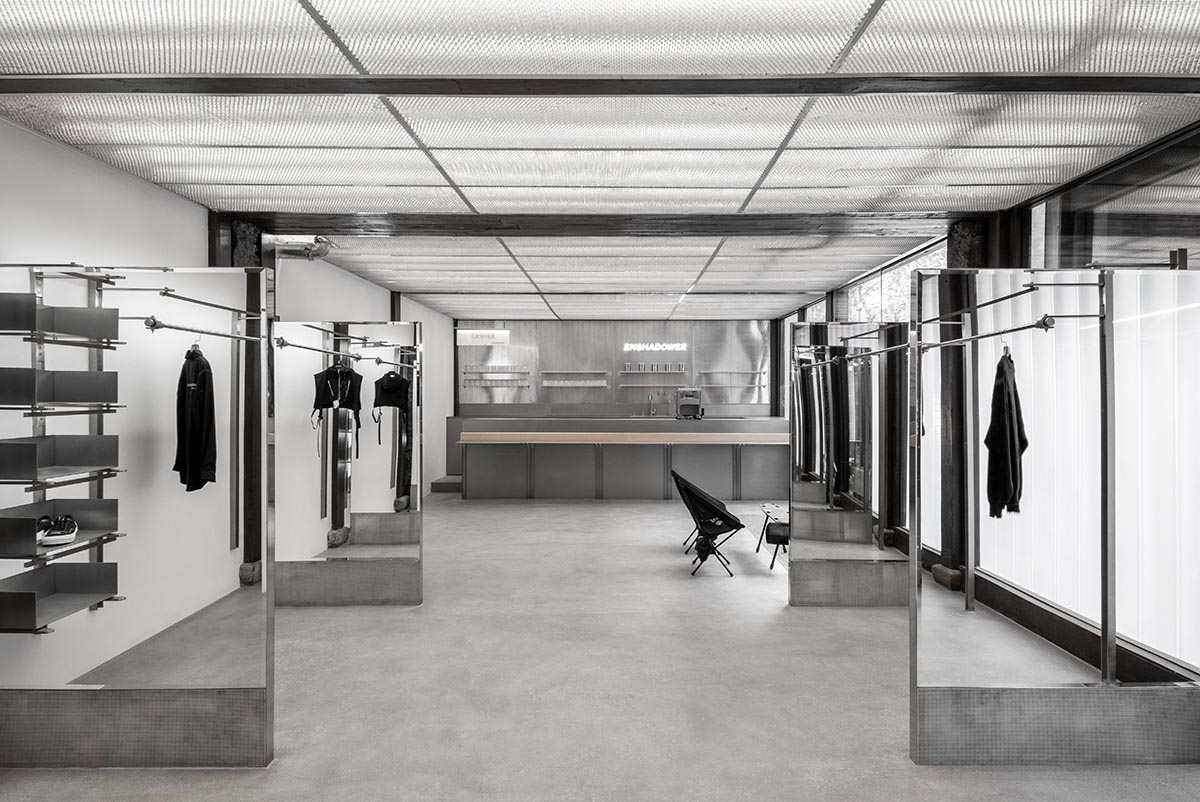 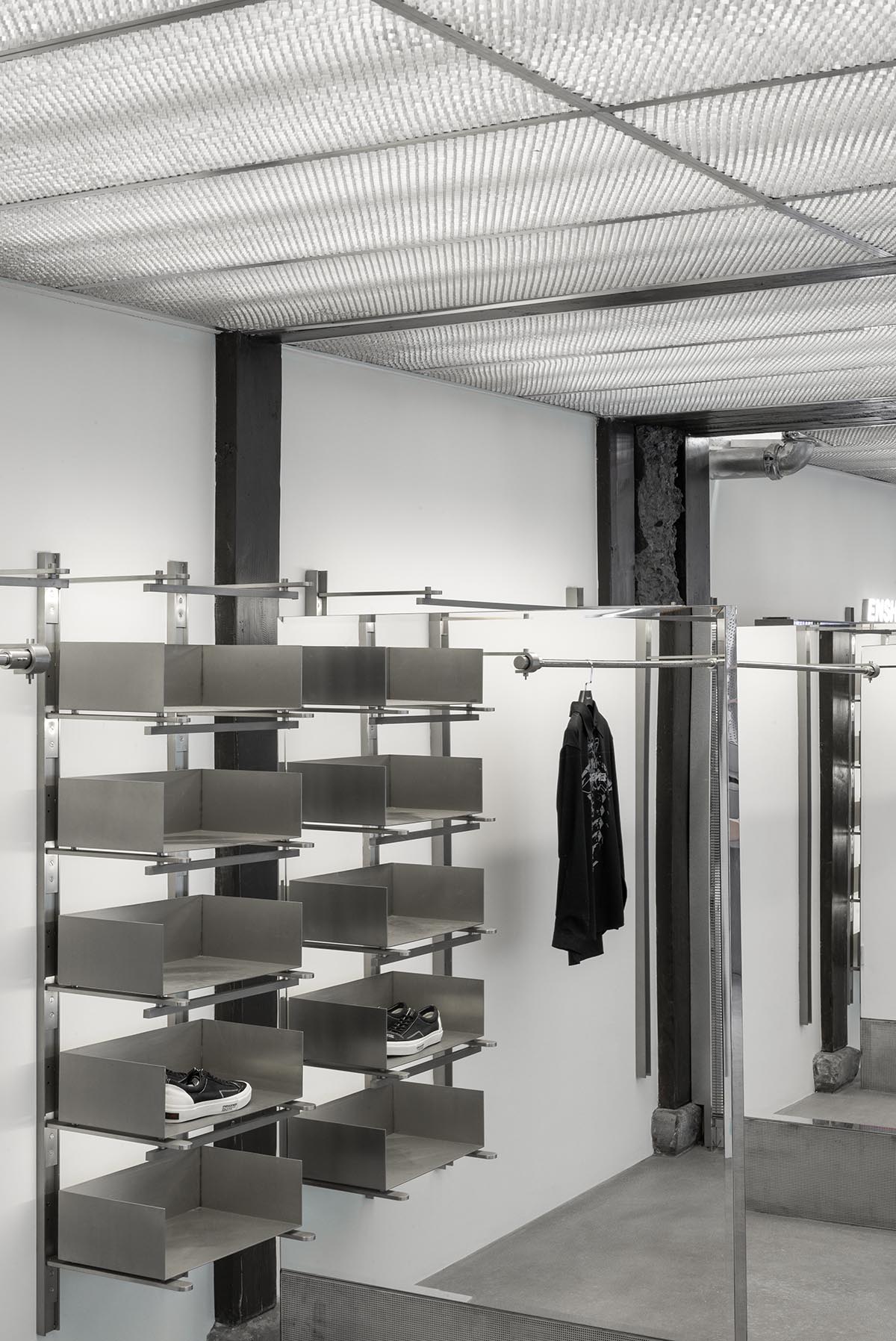 The space under the stairs is used as fitting room 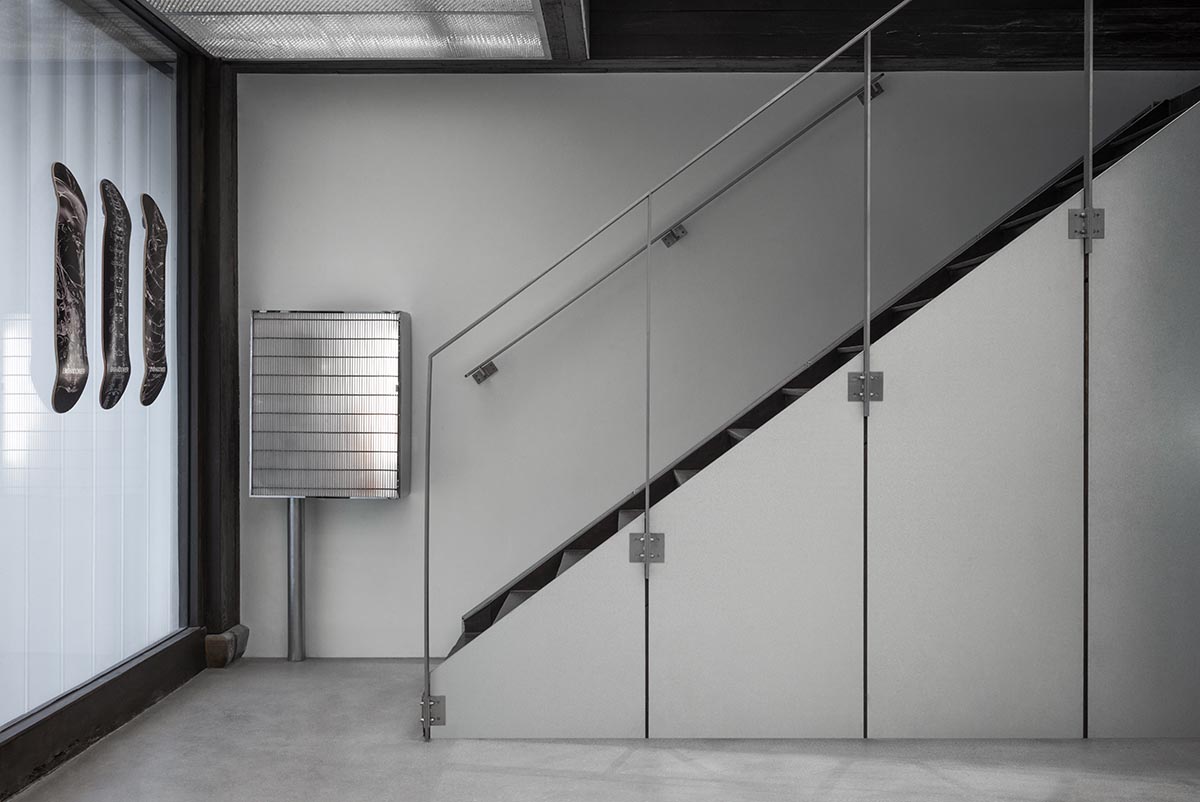 The wood stair leading towards the 2nd floor exhibition space 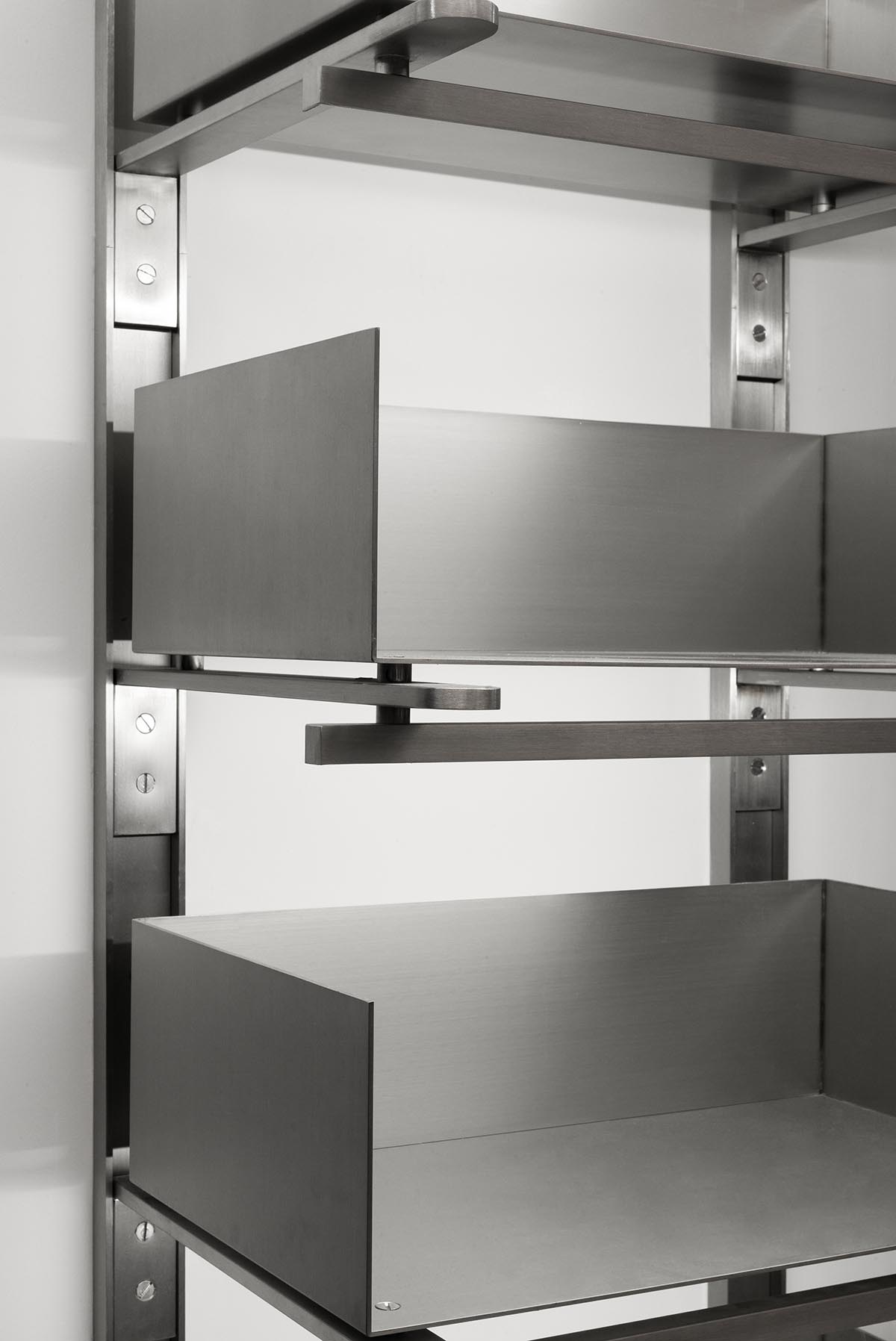 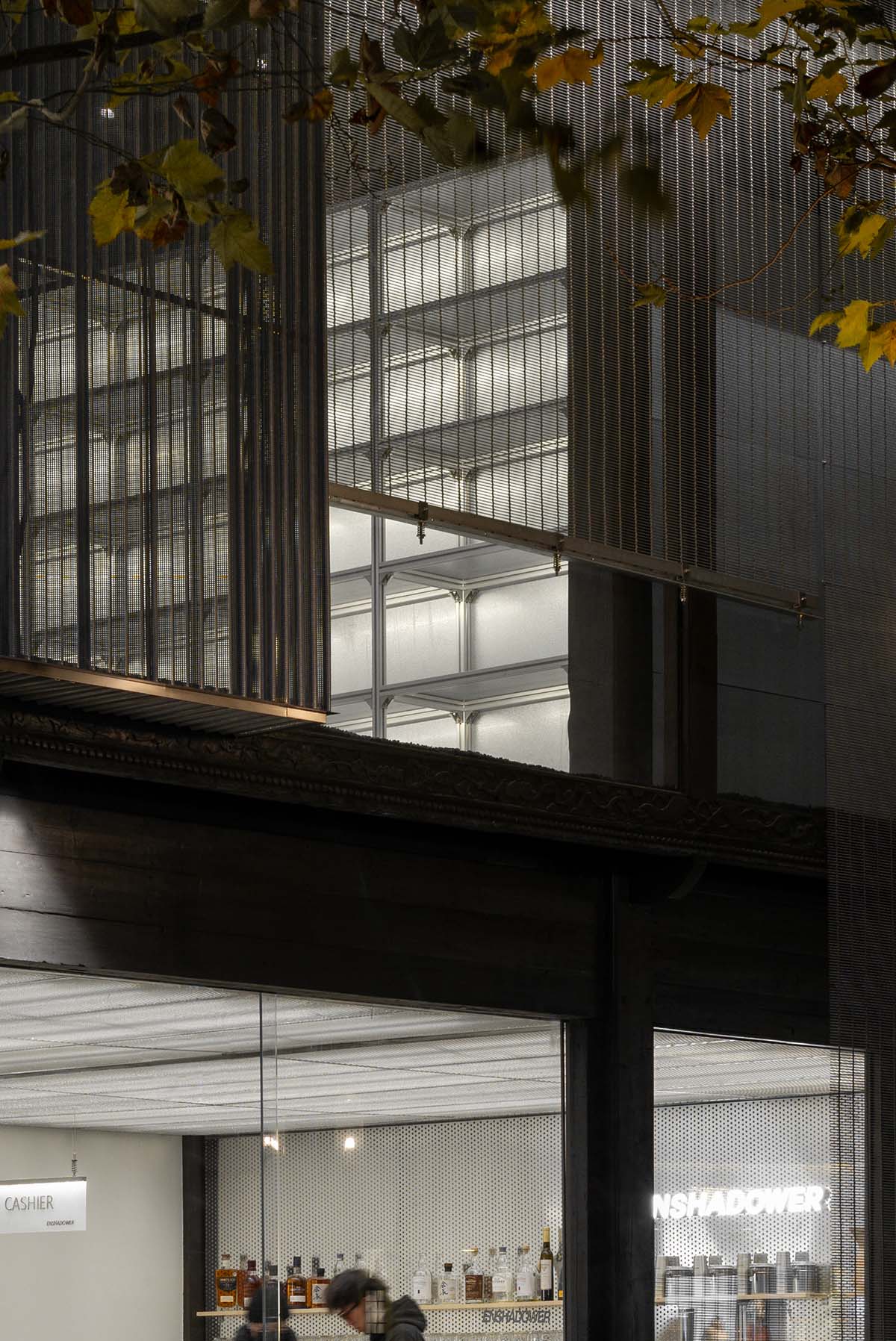 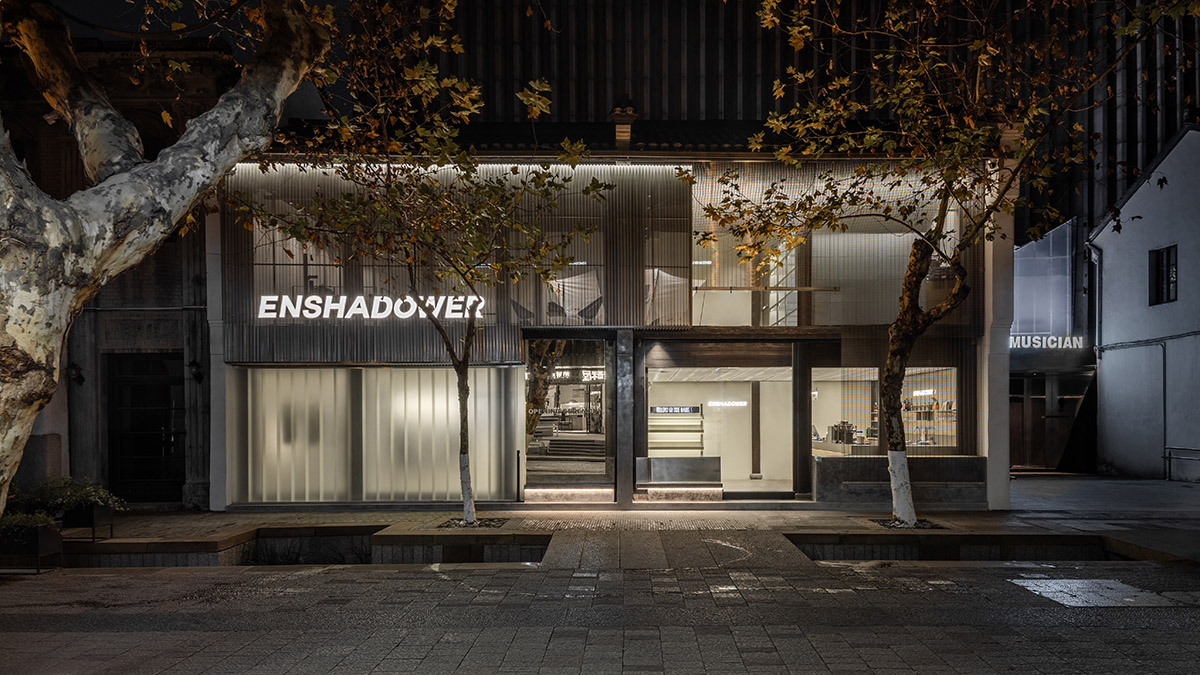 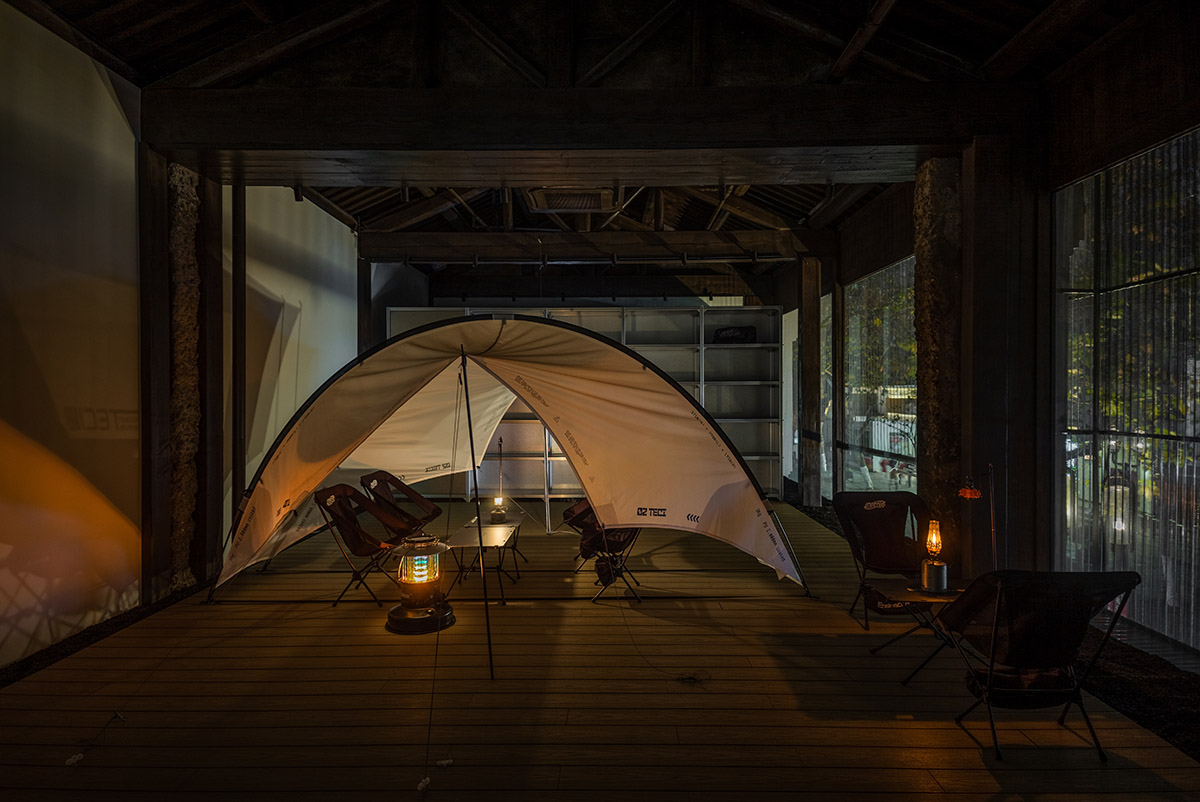 say kept the original structure as much as possible. It is open, and like a mini-square, the spotlight module group hidden in the wooden frame could also cope with different activities. The bottom is a modularized display case composed of an industrial aluminium profile. The outer side serves as a functional display case for hidden light belts while the inner side encloses into a storage space. Modernization process materials formed a mutual symbiotic relationship with the old building. 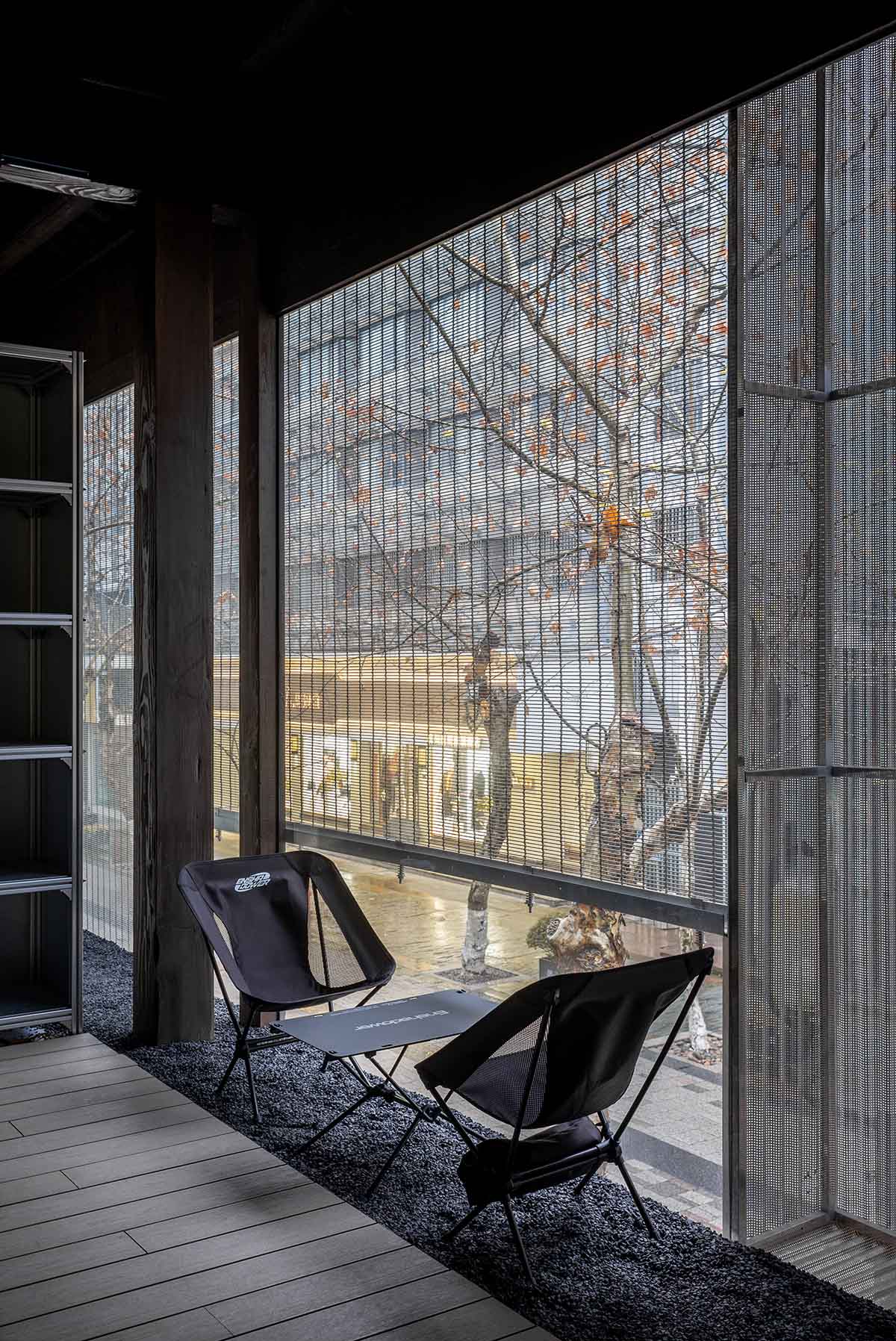 The Southern Song Imperial Street has always been a crucial commercial street for Hangzhou, the facade of buildings along the streets reflects the evolution of cultural over centries. say want to refresh the commercial atomosphere of the street with a touch of story-telling. 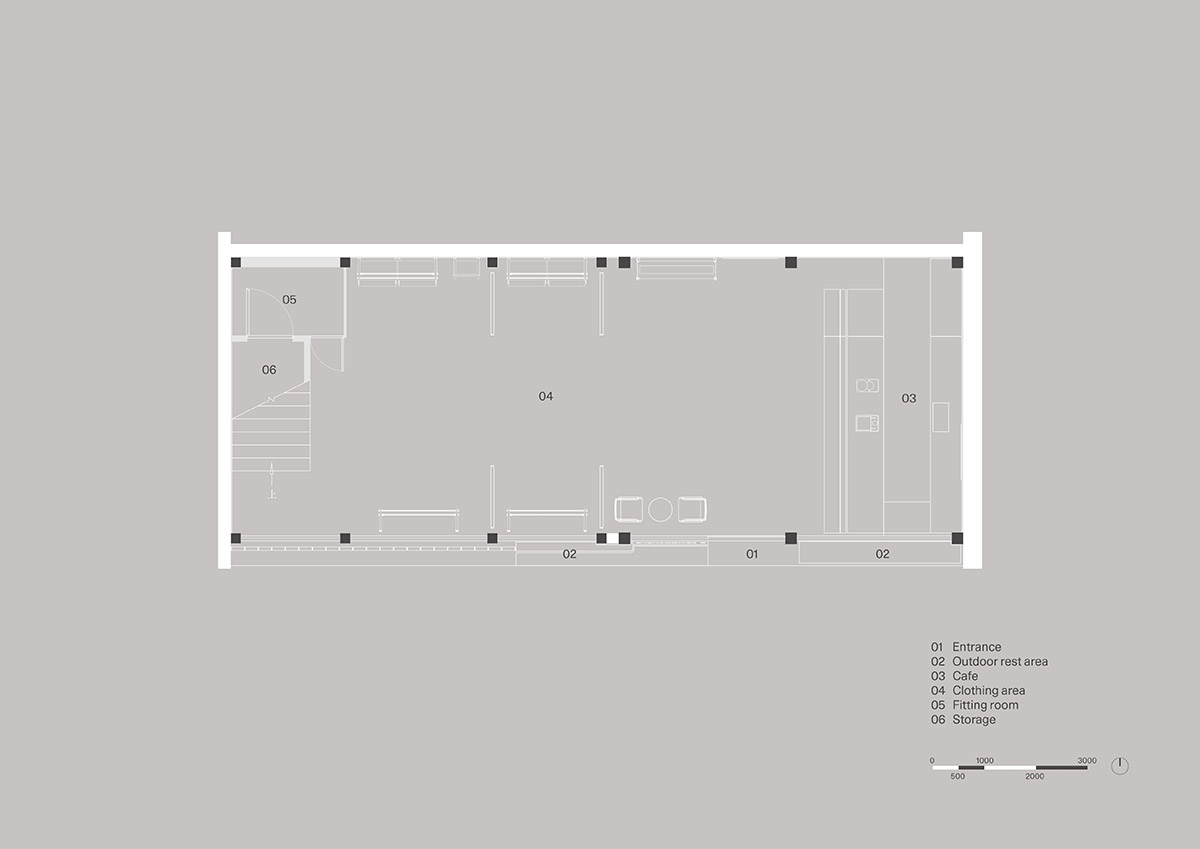 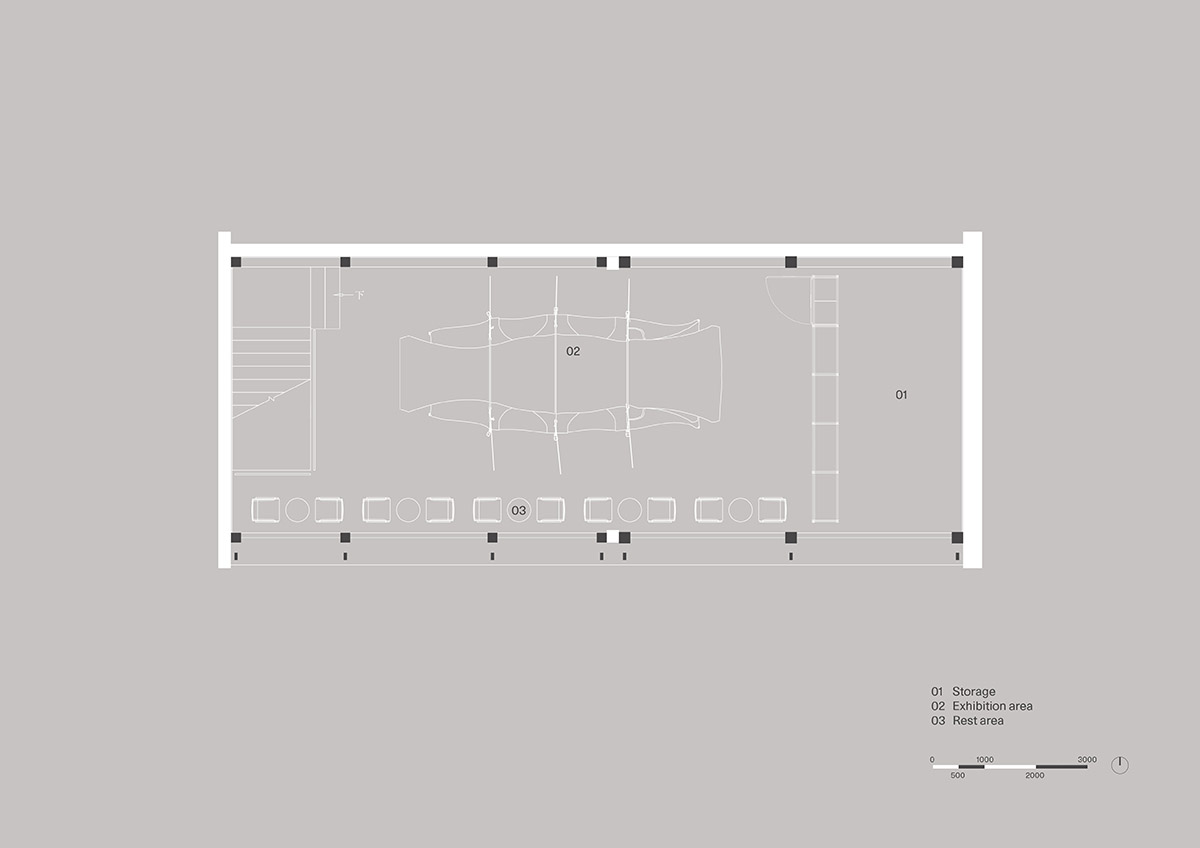 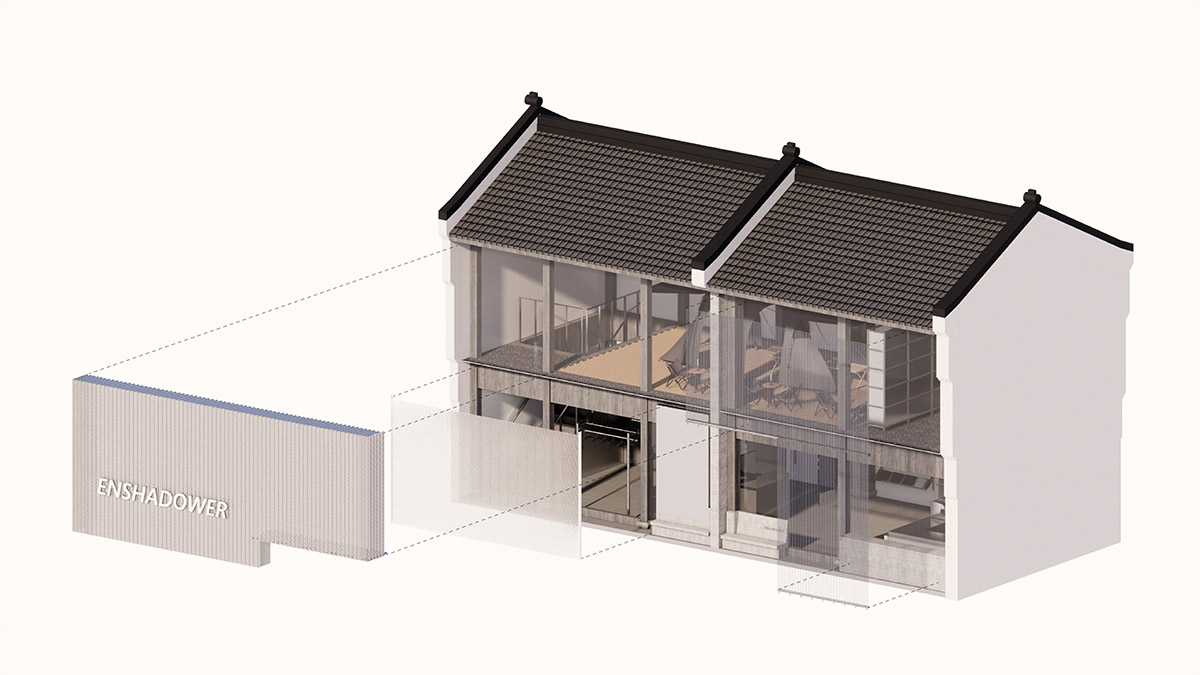 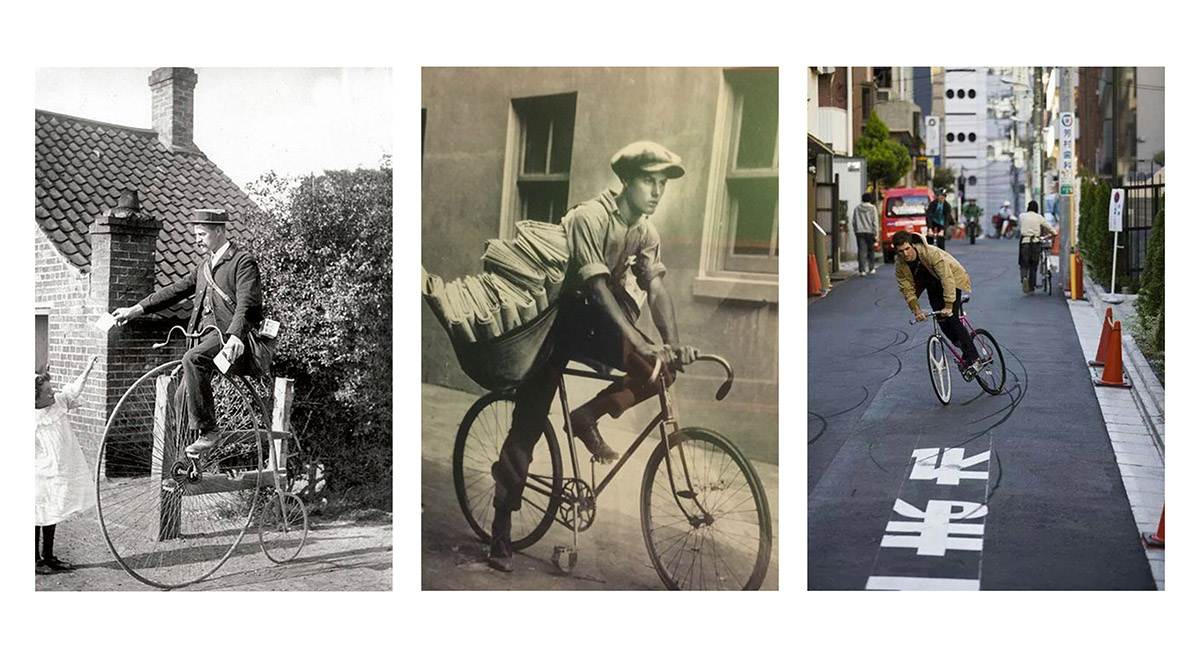