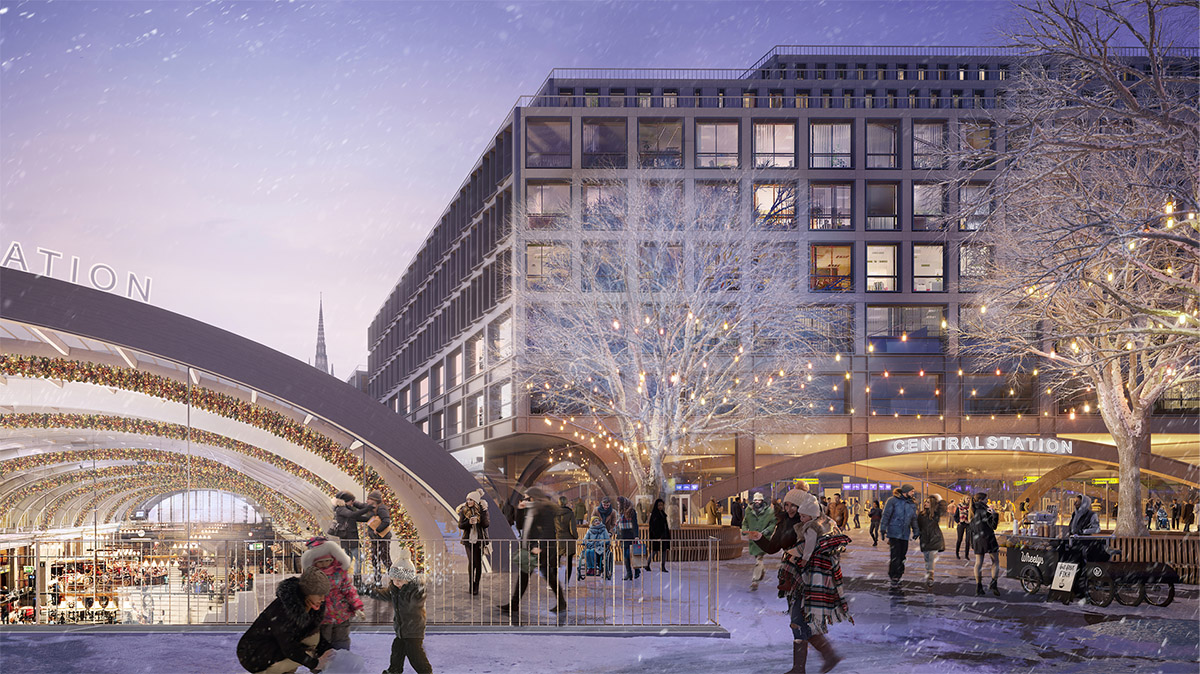 The winning design team, including LAND Arkitektur, Thornton Tomasetti, Ramboll, Wenanders and TAM Group, will create several modes of transport together in an integrated transport hub, while the scheme prioritising pedestrian flows and creating a new mixed-use urban district.

Located at the heart of the city, Stockholm Central Station was originally opened in 1871, the historic station now attracts to more passengers than it was originally designed for.

With the new design scheme, the city aims to increase the numbers of trains coming to the city with future plans the are set to catalyse the reinvention of Stockholm’s central heart.

The new district, which is largely built over the existing tracks, will re-connect the surrounding streets to create an active, friendly, and safe public realm that will stitch together the east and west sides of the city, improving passenger connections across Stockholm, without impacting the historic skyline. 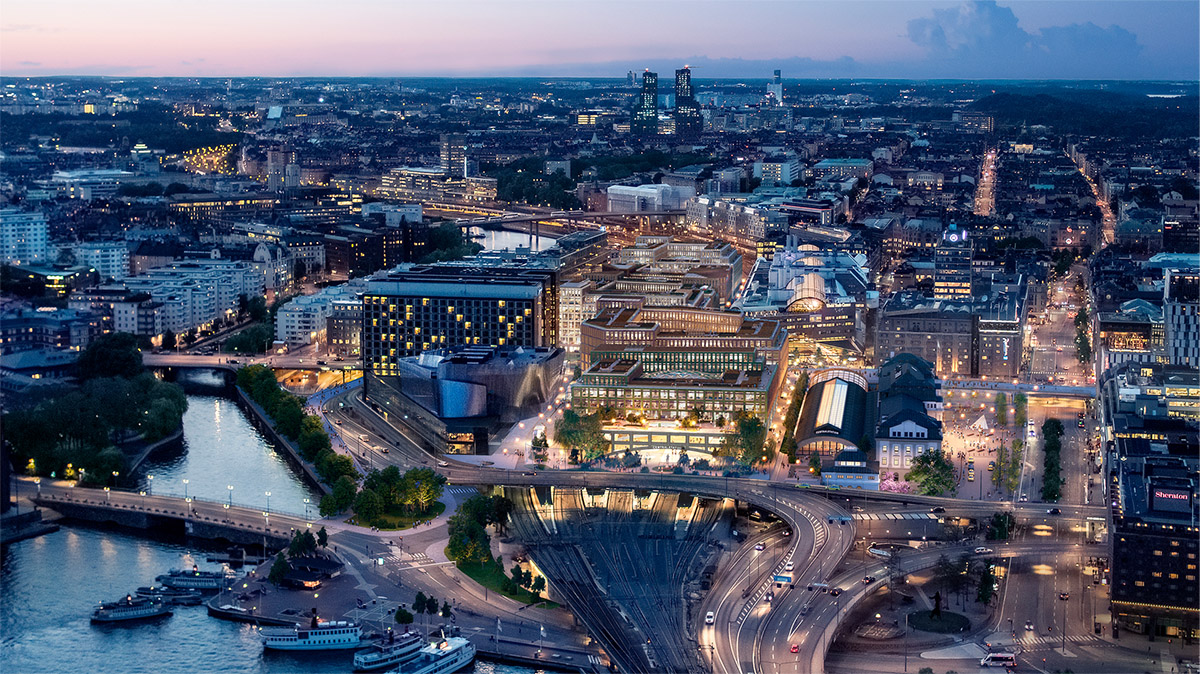 The new masterplan is aiming to create a brand-new public square, which will allow the new station precinct to become a natural part of the urban fabric.

The design of the masterplan is inspired by the scale and colours of the Klara blocks on which it is built on the existing streetscape of the city to create a dynamic district for a range of mixed-use functions. Offering an active public realm, it is intended to provide a better connectivity with clear wayfinding. 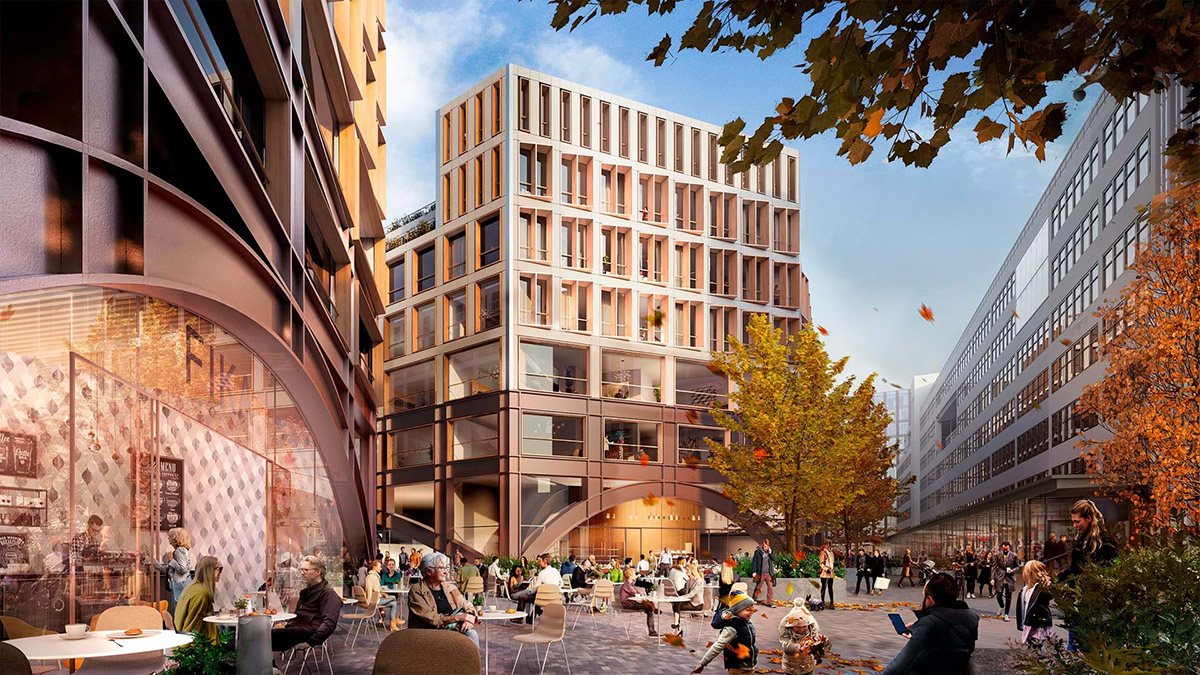 While the design recreates the historic Station Railway Park on the southern side, with spectacular views over the old town of Gamla stan, Södermalm and the City Hall, the design will be a new green meeting place in the city centre.

The entrance hall will combine the new and historic parts of the station, linking the central station platforms, City Terminal Buses and Arlanda Express Trains. 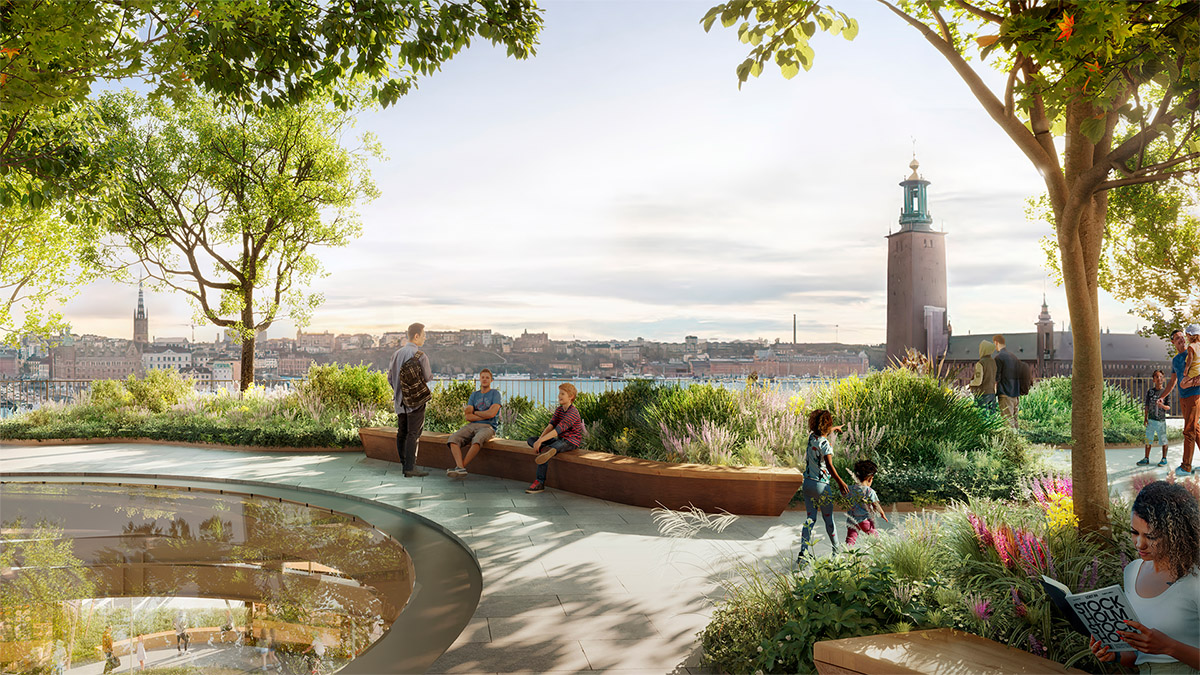 "As the world’s collective focus shifts to more sustainable ways of living, working and travelling, it is vital that we enhance and redevelop our transport nodes and repair and connect the urban fabric around them."

"We look forward to developing these proposals with Jernhusen, Trafikverket and the City of Stockholm over the coming months," Fox added. 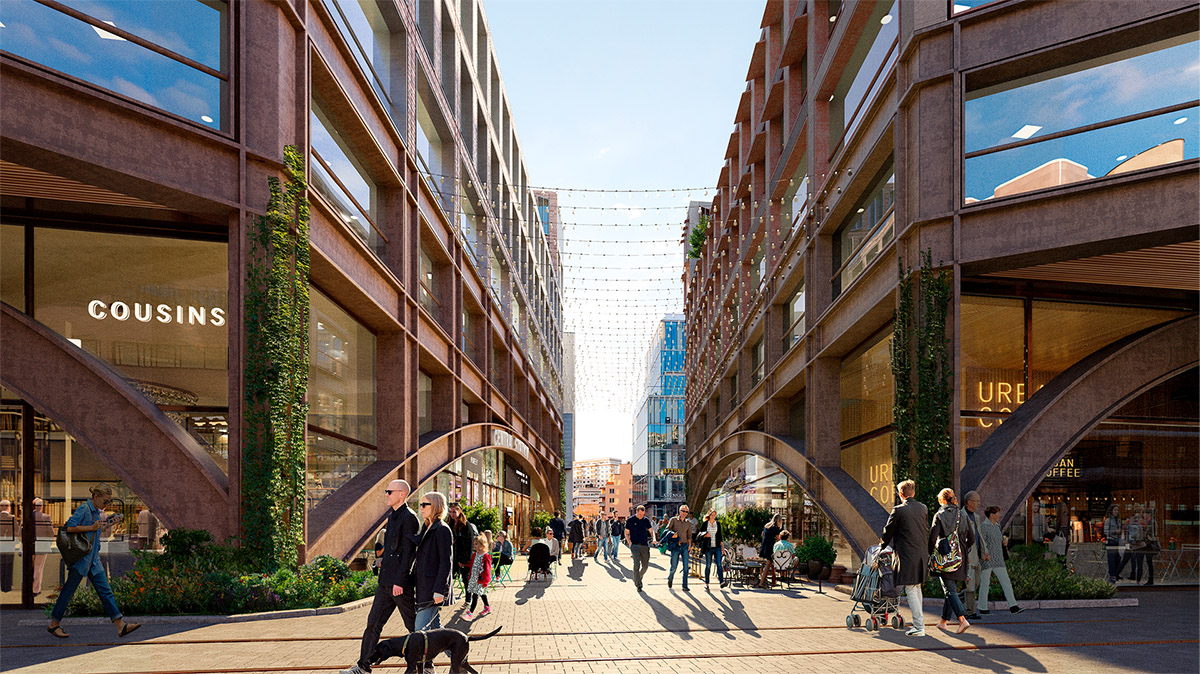 "This is a historic undertaking. We are incredibly honoured to be tasked with developing our proposals further. Stockholm is a unique city with historic city silhouettes," said Angus Campbell, Senior Partner, Foster + Partners.

"We believe our proposals can form meaningful connections between the city and the central station area, while creating green urban spaces for people to meet, as well as a central focus for sustainable travel at the heart of Stockholm," Campbell added. 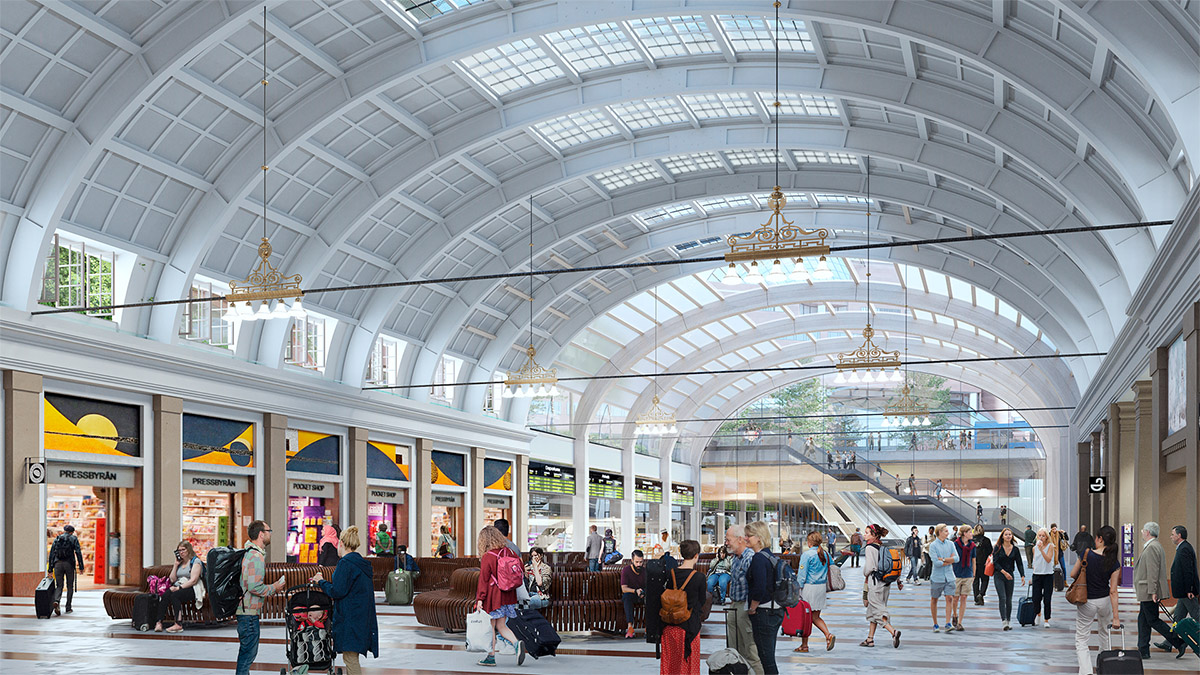 The proposal will create a new central tunnel to realign the tunnel with Klarabergsgatan, which will create a subterranean east-west link across the site. The reason of the proposed tunnel is to allow for the possibility of extending the tunnel and to provide a below ground connection through to the Citybanan in the future.

"The tunnel will then connect the extended platforms of the Central Station, Arlanda Express and the Bus Station in the City Terminal, bringing together four modes of transport to create a single intermodal station," Foster + Partners stated.

"A new centralised Logistics Centre could also be positioned to the west of the tracks, where goods and refuge can be serviced directly, without disturbing the public realm above." 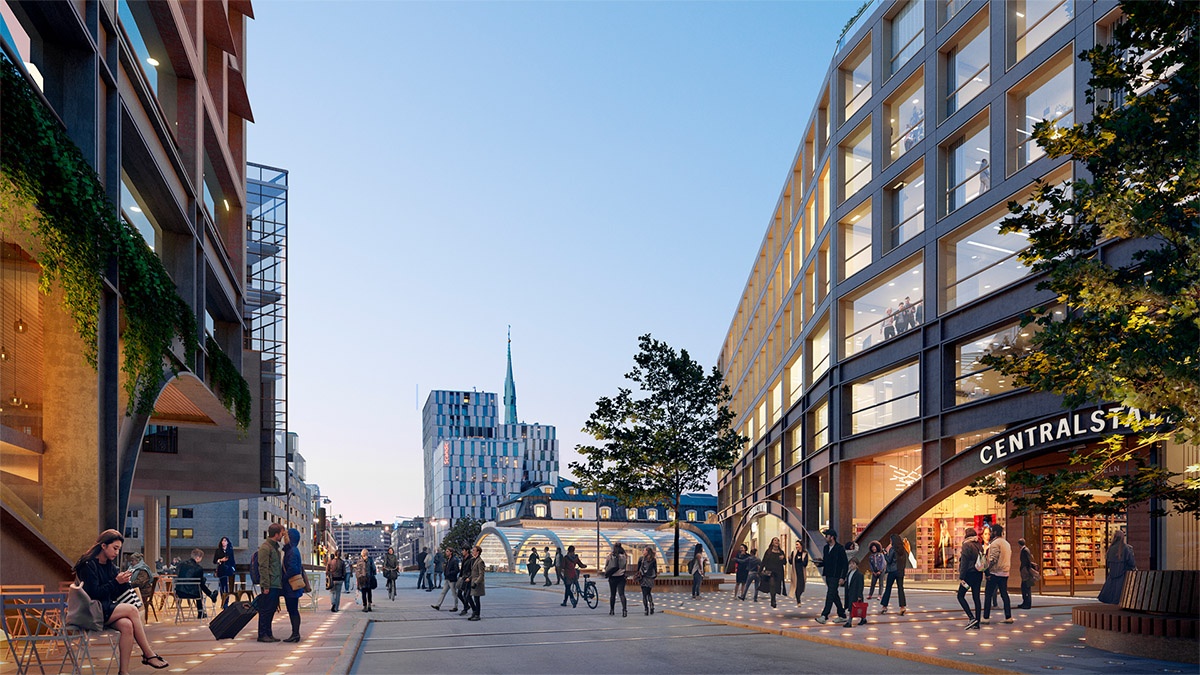 "It is fantastic to be involved in redefining Central Station's role at the heart for Stockholm, while at the same time providing new additions that reference the surrounding streetscape of traditional Klara block architecture, which respects the cultural values of the city," said Pye Aurell Ehrström from Marge Arkitekter. 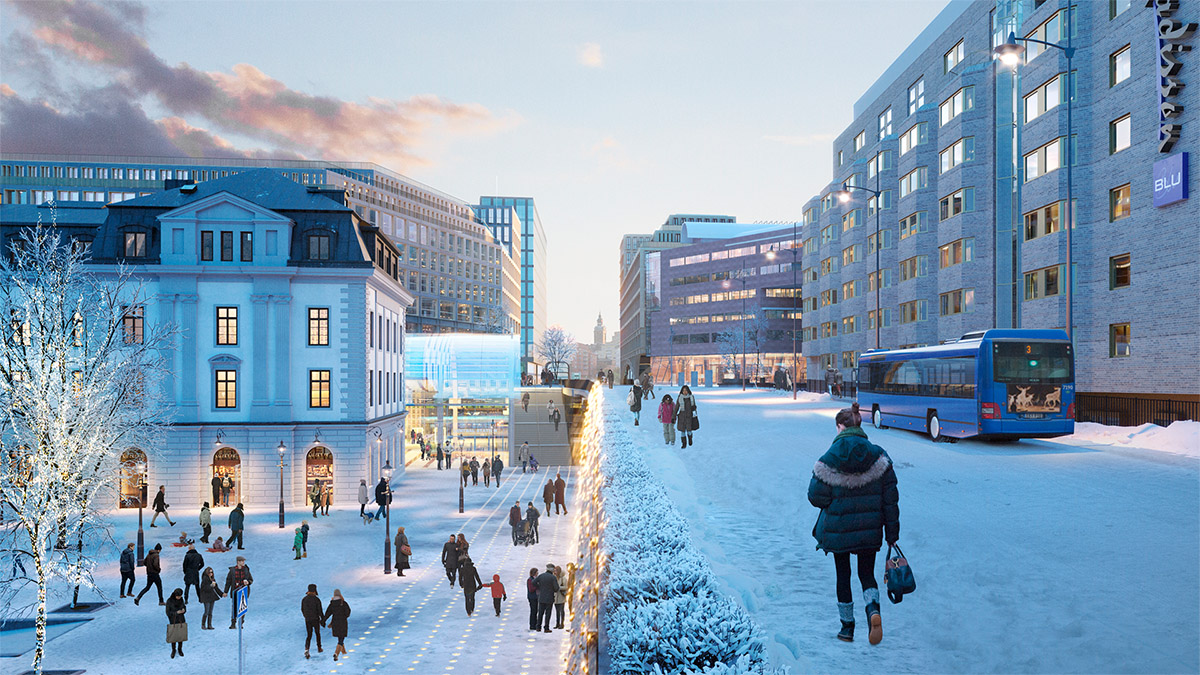 The project, which involves covering the track area and doubling passenger capacity in Sweden's most central location, is scheduled for planning consultations in 2023.