Architecture in Theory VS Reality: A Case Study of Eyup Cultural Center and Marriage Hall

When an architectural project is being designed for an urban space or is commissioned for public use by the municipality it is usually taking all the eyes upon its completion. Several articles are written about it, design students are encouraged to visit it and it is discussed in university lectures and symposiums for its uniqueness. But it is not a common notion to study the project later to see what has become of it and how it is operated.

Eyup Cultural Centre and Marriage Hall is an example picked for such a case study. This article will give a brief, a comparison of the intention of the project and its current state.

Eyup Cultural Center and Marriage Hall was commissioned by the Eyup Municipality and designed by Emre Arolat Architects. It has been completed in 2010 over an area of 6,500 square meters. This project interestingly was designed alongside the client (Eyup Municipality) unlike the usual competition projects, where the architectural office is solely in charge of it. Contrary to the majority of the public buildings in Turkey that are commissioned by the state, the cultural center does not have any reference to the Neo-Seljukian period or the Neo-Ottoman, which is one of the main reasons why this building attracted a lot of attention at the time.

The building is located directly on the seashore of the Golden Horn. The municipality upon the commission stated in the requirements, the need for connecting the public with the shore and the area around the project which is filled with parks. So the main goal of this project is to connect the main street and the pedestrian road to the shore since there is a huge level difference in the topography. 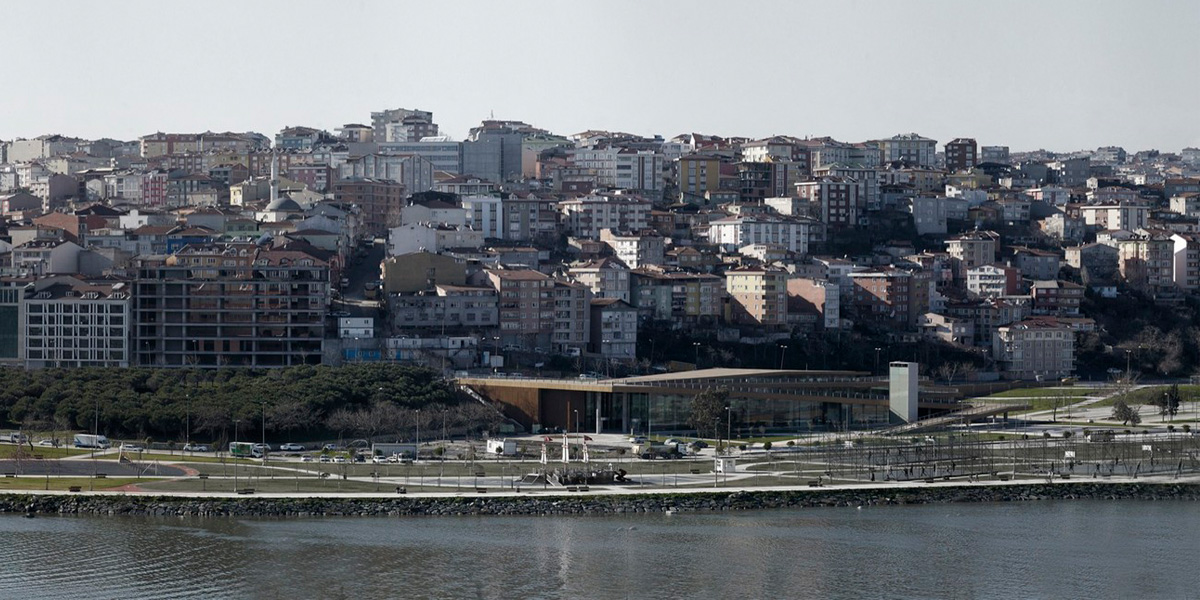 The project consists of a massive ramp that runs down from the top level of the street down to sea level. It has an open parking lot on the side and an urban space or a park-like area in front of the project, facing the sea. The urban space hosts two small artificial ponds and a vertical steel mass erected high like a monument.

The form of the building that is taking the shape of a ramp makes the jewel of the project, creating easy access for the people from the upper to the lower level. This wooden ramp is fashioned in an extended 3-dimensional zig-zag form (whether one looks at it from the front elevation or the top view). 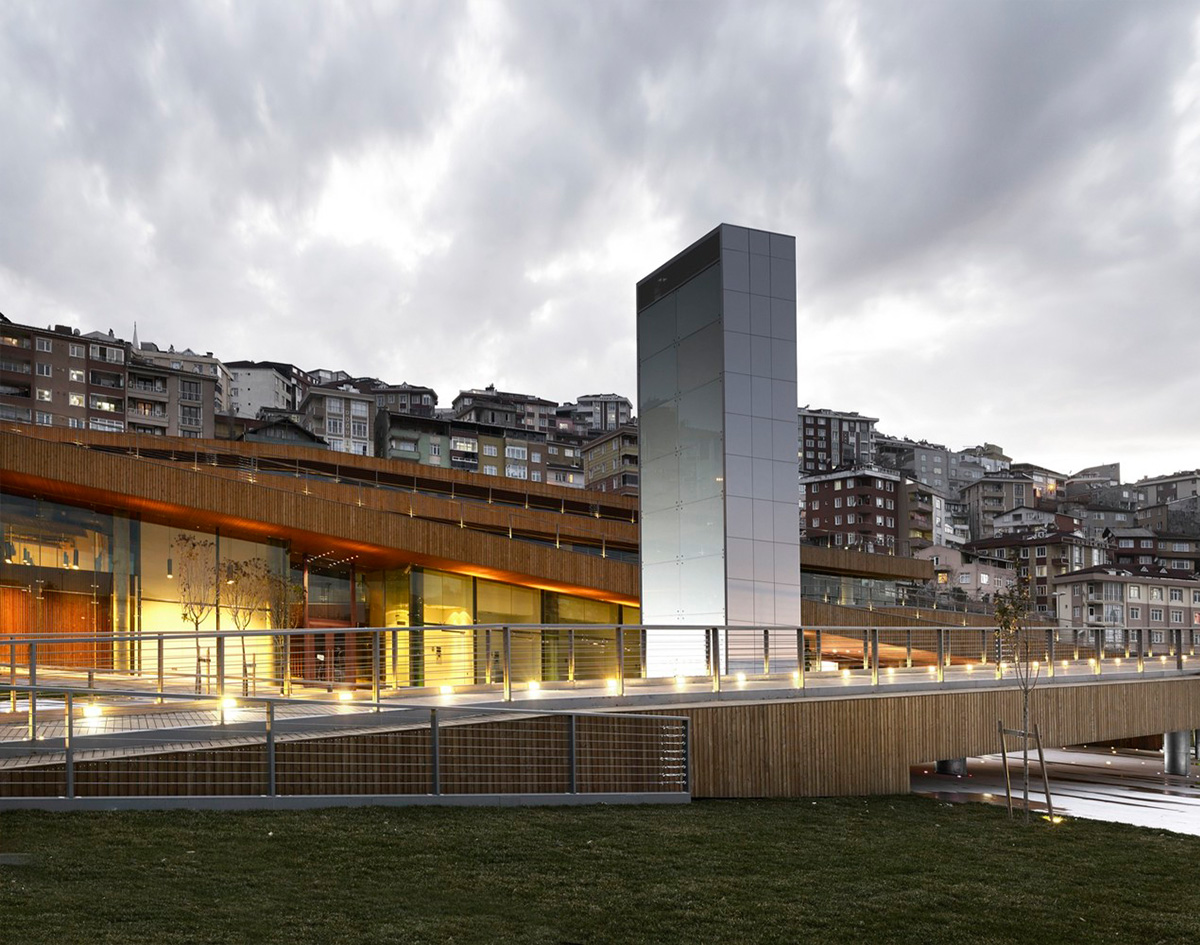 The empty spaces in-between the ramp are filled in with glass. The massive columns that are holding the structure look like vertical strip lines hanging from the structure. Due to the building’s materials and shape, it gives a very light notion as if the neighboring buildings behind the project are settled on top of it and are holding it down. 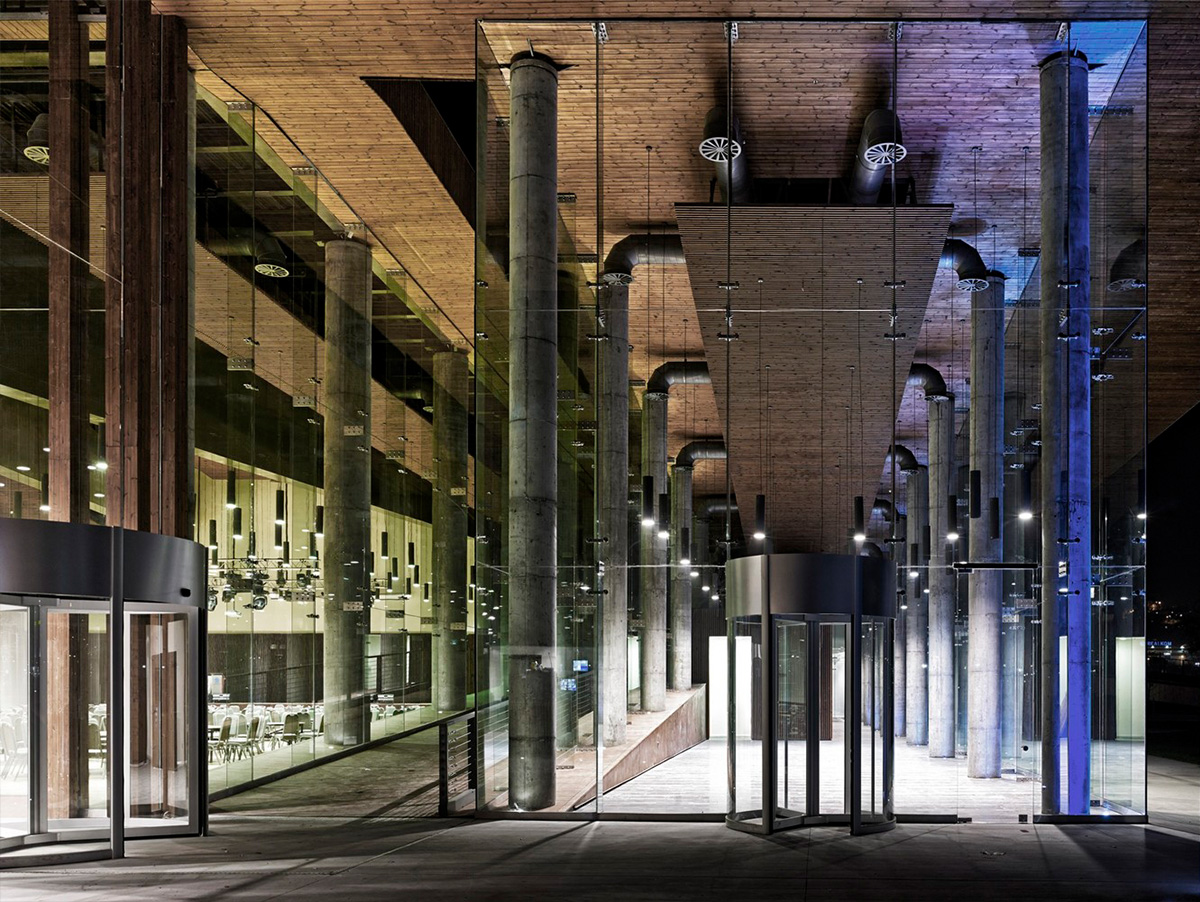 This transparency was intended for the visual connection as well, from the outside to the inside and the other way around. As a result, the project absorbs the urban space and interprets it as one. 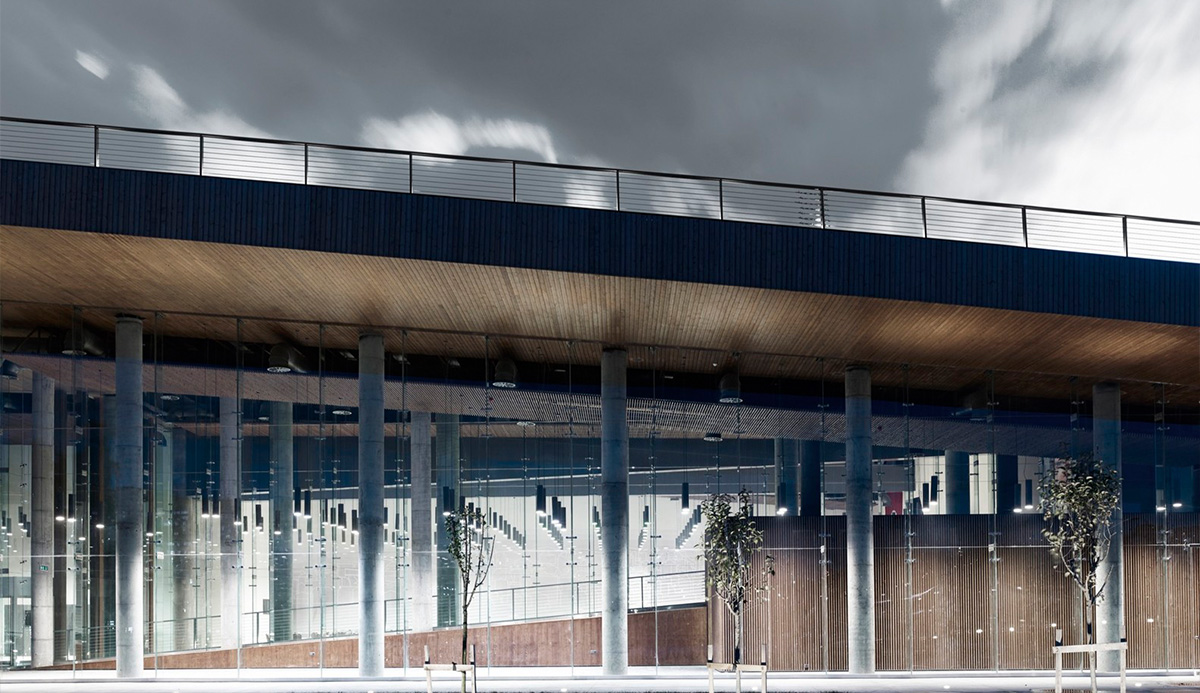 As if rising from the middle, a light-colored rectangular steel mass, light in color, is erected (that holds all the ventilation system), it is the only part of the project that has a different texture. This looks as if there is a building emerging in the middle of the project or as if the project was built around this structure enhancing the idea of the building’s integration into the site. 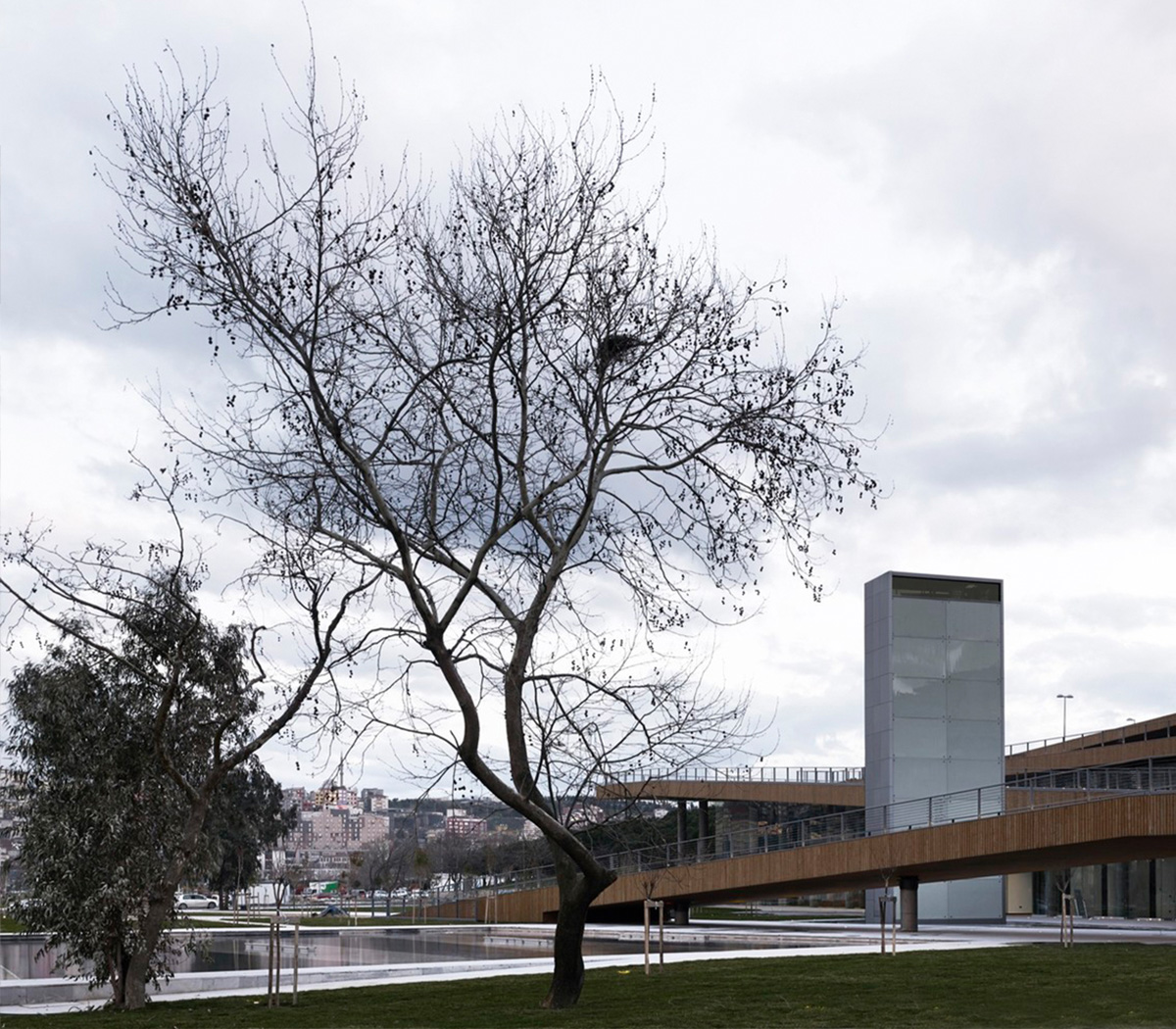 A connection between the environment has been established where the project looks like it was initially there before the houses were even constructed. If observed from the seaside one will get the illusion that the houses were placed on top of the building. The exterior material that was used is mostly wood, creating an atmosphere of flow and a housing belt that the project enhances rather than disrupts. 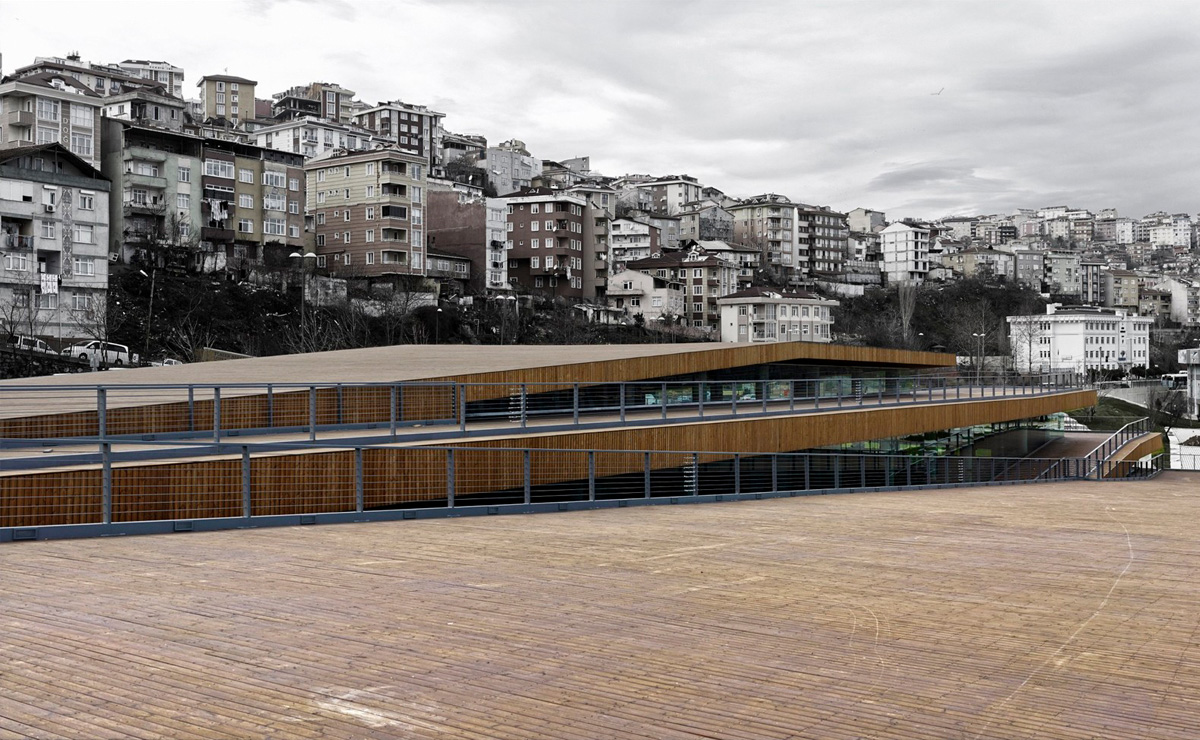 The interior of the building, on the other hand, is a different scenario. There are several entrances to the building, the administrative part can be entered directly from the highest level from the street, and two main entrances for the public at the lowest level. One of the entrances leads into a waiting and register hall that directs towards the marriage hall, while the other to the biggest conference hall. 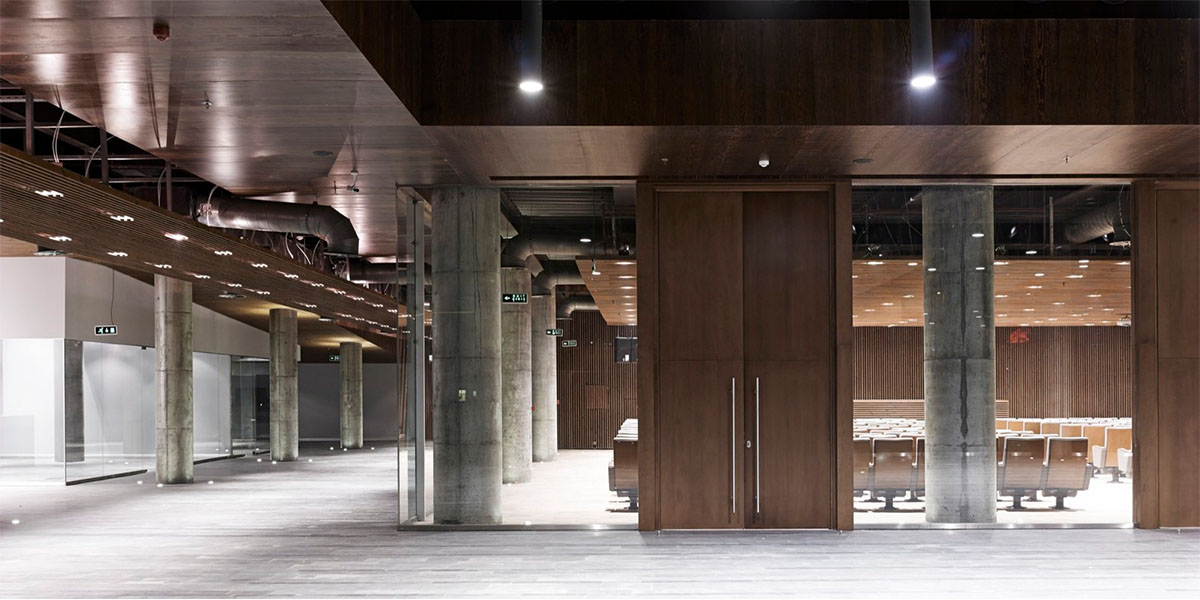 From the register hall, one is being led towards the smallest conference hall on the second floor via a staircase. So in total, there are two conference halls and a wedding hall. The corridors or the hallways are used as exhibition spaces when conducted. Regardless of the building being a cultural center, there are no spaces dedicated solely for exhibition purposes. The interior of the building is an intensive mixture of exposed concrete, metal, and wood which generates a distinct industrial atmosphere. 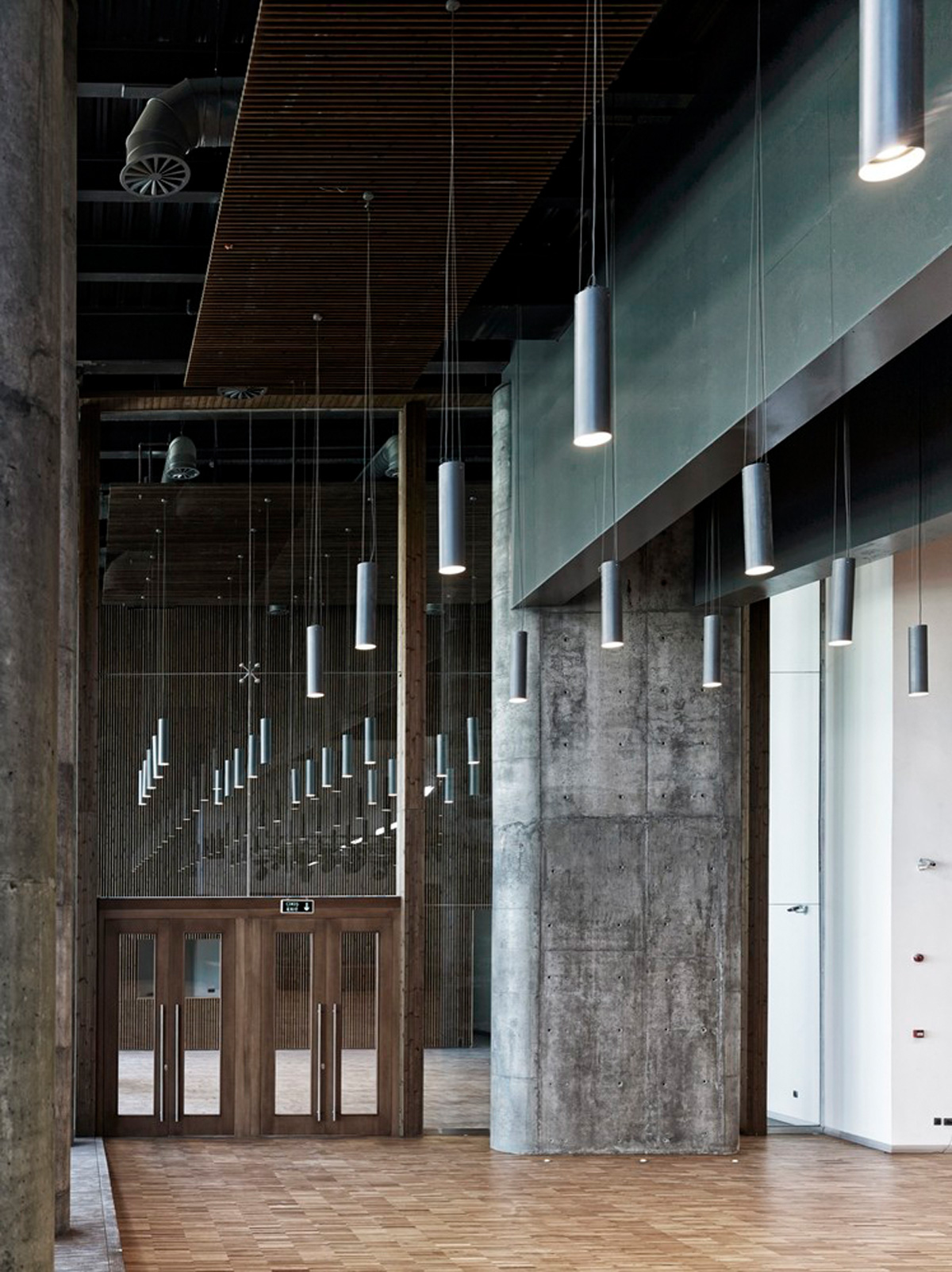 The ramp organizes the functions with its height difference. The highest point of the ramp is where the biggest conference hall will be found, the lowest one is where the registry and the waiting hall are located, on opposite sides of the center. All the functions in the space are linked through a corridor that circulates them. If one would face the seaside from the inside, it feels as if the interior is absorbing the urban space within, due to the glass walls that are enveloping the project. The ceiling throughout the entire project is quite provoking with its exposed feature, irrelevant to the function or the height. Whether it is the main hall, the marriage hall, or the conference hall - all the ceiling is displaying the ventilation system, pipes, tubes, and the lighting system as if it is a hanging exhibit on its own. The backstage area, corridors, staff rooms, and the emergency halls, on the contrary, do not unmask any of the mechanical systems. Concurrently, the rooms that are designated for the staff and the personnel are all painted in white even the columns, with no wood or metal references. This in turn implies that the concept intentionally displays the technical details for the visitor. The main scenography was dedicated for the visitors and spectators that are going to interact with the industrial and structural ambiance of the hanging exhibition and the urban space that feels as if crawling towards the interior.

The current state of the building and the surrounding is quite surprising. The ramp that was expected to host the public and take them down the seashore while enjoying the view, is prohibited and is open to only personal use. The artificial ponds in front of the building are empty and look to be drained out. The park seems deserted and not maintained, with a little amount of grass or at least what is left out of it. The entire project seems lifeless and walking around the area feels quite isolated, with no one walking on the ramp nor enjoying the urban space in front of the center, regardless of the initial intention.

So if the ramp that was creating a promenade for the visitors and by-passers is forbidden, can one say that an ‘emotion’ was stripped of the project? Was that the link that going to be achieved strolling down the Golden Horn towards the shore disconnected?.

Upon visiting the site and inquiring about the reasons for the ramp’s restriction, the excuse lay in the administrative offices that are located on top of the ramp. The security officer stated that the public should not be passing by these offices. He also stated that the other reason behind the restriction lies in safety, children might fall off the ramp. (Both points sounded absurd simply because an architect wouldn't miss such points while designing - safety and circulation).

With special permission from the administrative office, I was lucky enough to have the chance of strolling or rather escorted towards the ramp with the security guard by my side, walking alone even with permission was still not allowed. One must make a prior reservation and get permission to even get into the building if there are no public events. This makes one wonder; how does a public building require permission to enter and can be restricted from the public?. Is it even public anymore? Nonetheless, the experience of the ramp was worth the trouble. Interestingly, the ramp happened to have quite a wide length, like a platform, and was covered with high railing bars,  (it didn't seem dangerous nor life-threatening). Walking along the ramp was quite a breathtaking experience, like escalating up the Golden Horn. On the top of the ramp, the view of Istanbul was captivating. It truly felt like an experience of the beyond that the public is unfortunately deprived of. This promenade that was created for the people was somehow guarded against them. It felt as if the building’s jewel was not being shared ‘on purpose’ like the experience was kept for only the chosen ones. Which makes one wonder yet again; why was such a design commissioned in the first place? The ramp stands now as a potential experience that can bestow a promenade for the by-passer or visitor, but instead, it is left to wither away just as the garden and the ponds are left deserted.

The building inside also seemed to have some abandoned properties. Details rusted with time or malfunctioned and not tended to.

It seems that even though the project might have completed the requirements the area was lacking and was integrated into its surrounding, the functional state of the project post-construction is quite dysfunctional.

The project intended to create a structural landscape, hence, the interior of the project seemed to connect to this idea and created its own ‘structural skyscape’ where the exposed ceiling was playing its role along with the inverted artificial topography.

The cultural center could not look more befitting the environment. Strolling down the ramp generates a notion of a journey, descending from the sky down to earth while and at the end facing lightness and transparency whether confronting the building or the sea. One’s mind can no doubt drift into a journey of its own…

So the question that should be posed to designers is this: Can a project be considered successful if it fulfills all of its requirements or is it successful when those requirements are functional?. For what is the point of creating that which can not be experienced?.