Enriched by his long association with Le Corbusier and inspired by his book "The Three Human Establishments", veteran Indian architect Jeet Malhotra has evolved a concept of an "Environmental Planning Unit" for harmonious and balanced urban growth in India in the third millennium.

Architecture in general, specifically architecture of cities must follow the dictates of environmental morality. Keeping this in mind, Jeet Malhotra's proposal is to develop India comprehensively through flexible Environmental Planning Units (EPUs). To achieve this objective, the total needs of the Indians have to be foreseen and then an integrated and comprehensive process of planning can be started, giving highest priority to ecological considerations.

Past experience reveals that in India planners have failed at various levels in providing a healthy environment for future generations. In fact, they have created urban chaos and slums everywhere because of a galloping population growth rate, throwing the entire existing infrastructure out of gear. 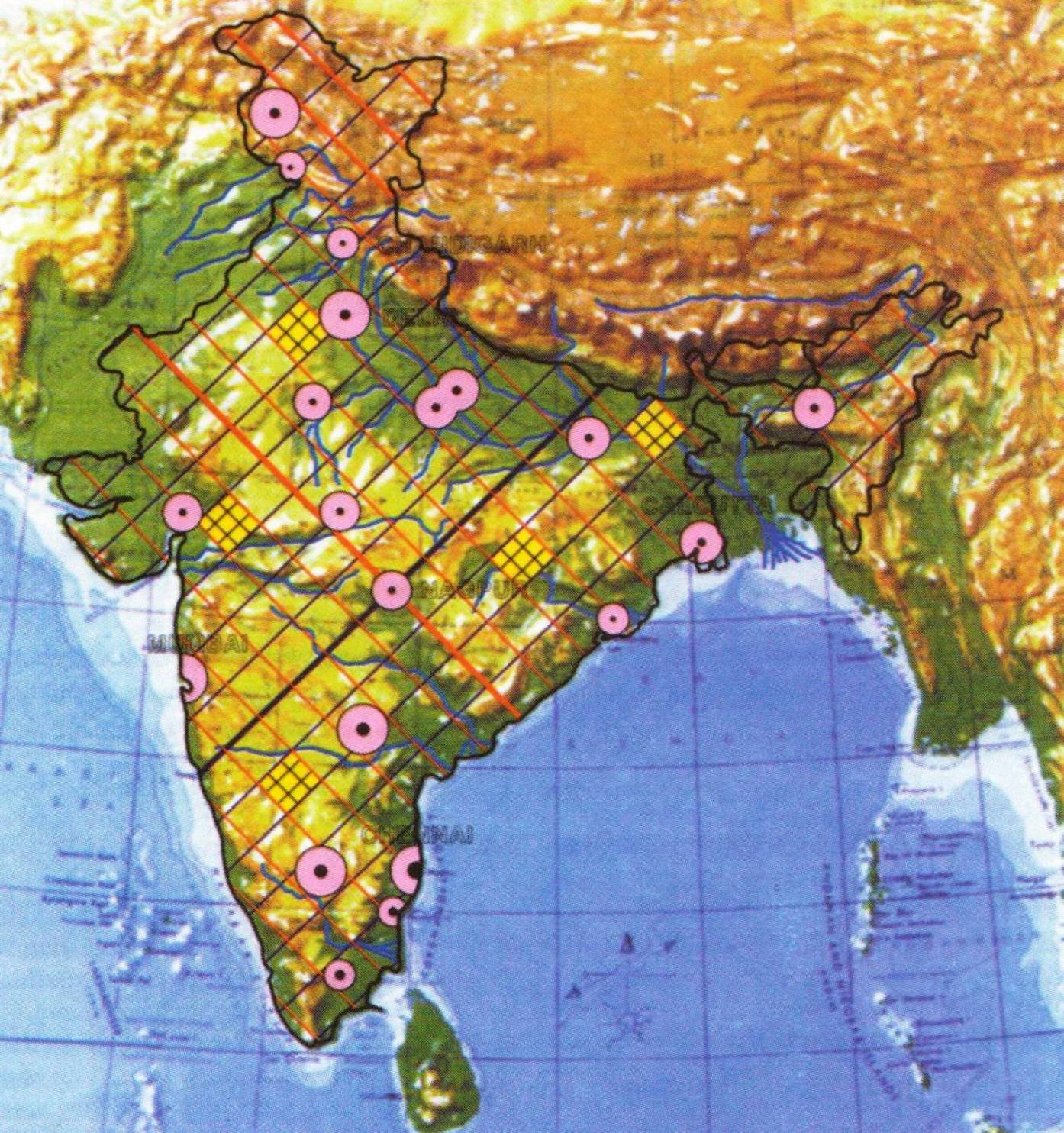 The main objective of EPUs is to try and provide a healthy environment through integrated and comprehensive planning for both urban and rural areas, because cities cannot live in isolation and a healthy interaction with rural areas and regions is crucial to prosperity and stability for all beings.

Le Corbusier's 'Three Human Establishments': agricultural, industrial, and urban areas need to be suitably segregated, and then get integrated in a comprehensive manner to improve living conditions. In the past decades India have built many satellite industrial towns around major cities, resulting in pollution and traffic chaos in these cities which has created unhealthy and difficult living conditions for citizens.

Delhi, for instance, is the worst example of town and country planning as far as ecological considerations are concerned. Also, this has led to a great socio-economic disparity between rural and urban lives, which in turn has led to continuous influx of rural population towards urban areas creating even greater imbalance resulting in slums in the existing cities. It is therefore desirable to restrict the size of the cities and concentrate on developing new urban centres, both industrial and non-industrial.

Each exercise of desired city planning needs a larger consideration of urban-rural balance which in turn means careful environmental planning. This can be achieved with the help of the proposed flexible EPUs all over India. Nature's architecture must be understood with the help of the latest research in science and technological advancements, and man-made architecture should be dovetailed into it. The proposed EPU is the man-made unit founded on this concept of environmental ethics. It is an approximately 50-kilometre by 50-kilometre unit; 50 kilometres is the minimum suitable unit for providing the necessary infrastructure for any human settlement and for allowing nature's self-correcting properties to get rid of any pollution, be it of air, water or land. 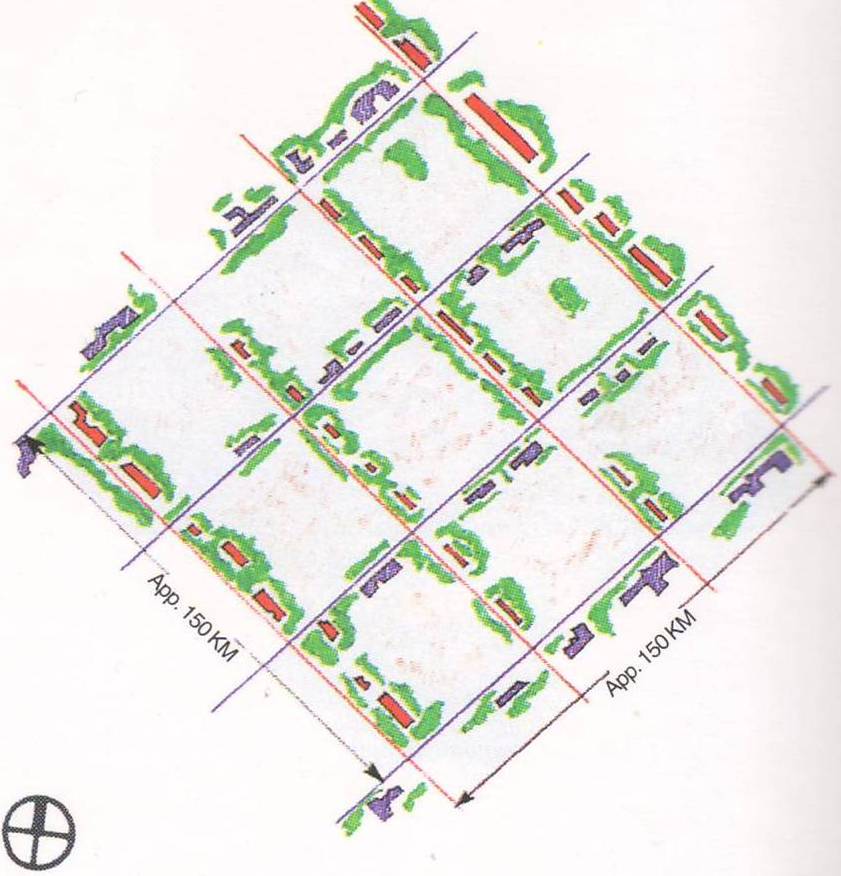 A flexible, integrated and comprehensive hierarchy of nine such EPUs shall further become a mother EPU providing a higher hierarchical level of infrastructure for the constituent and neighbouring EPUs. However, in this scheme, both industrial and non-industrial parallel urbanization projects are to be located only on infertile land in backward areas with their respective appropriate infrastructures.

This approximately 2500 square kilometre grid shall not be applicable to existing cities having a population of two million or above or to specially designed towns like Chandigarh. This basic EPU has been deliberately kept at an orientation of 45 degrees to the north-south axis keeping in view the sunlight available, the direction of the wind and the monsoons, and finally, irrigation and drainage patterns of agricultural land.

Each Unit shall have its own agricultural zone, industrial urban zone, non-industrial urban zone, urban-rural and forestry zones. Each such zone shall have its necessary facilities like residences, shops, schools, hospitals, colleges, play areas, and cultural and spiritual centres for its inhabitants. All new non-industrial settlements shall be placed parallel to the wind direction and industrial settlements perpendicular to the wind with a thick cover of compulsory forest and agricultural development. 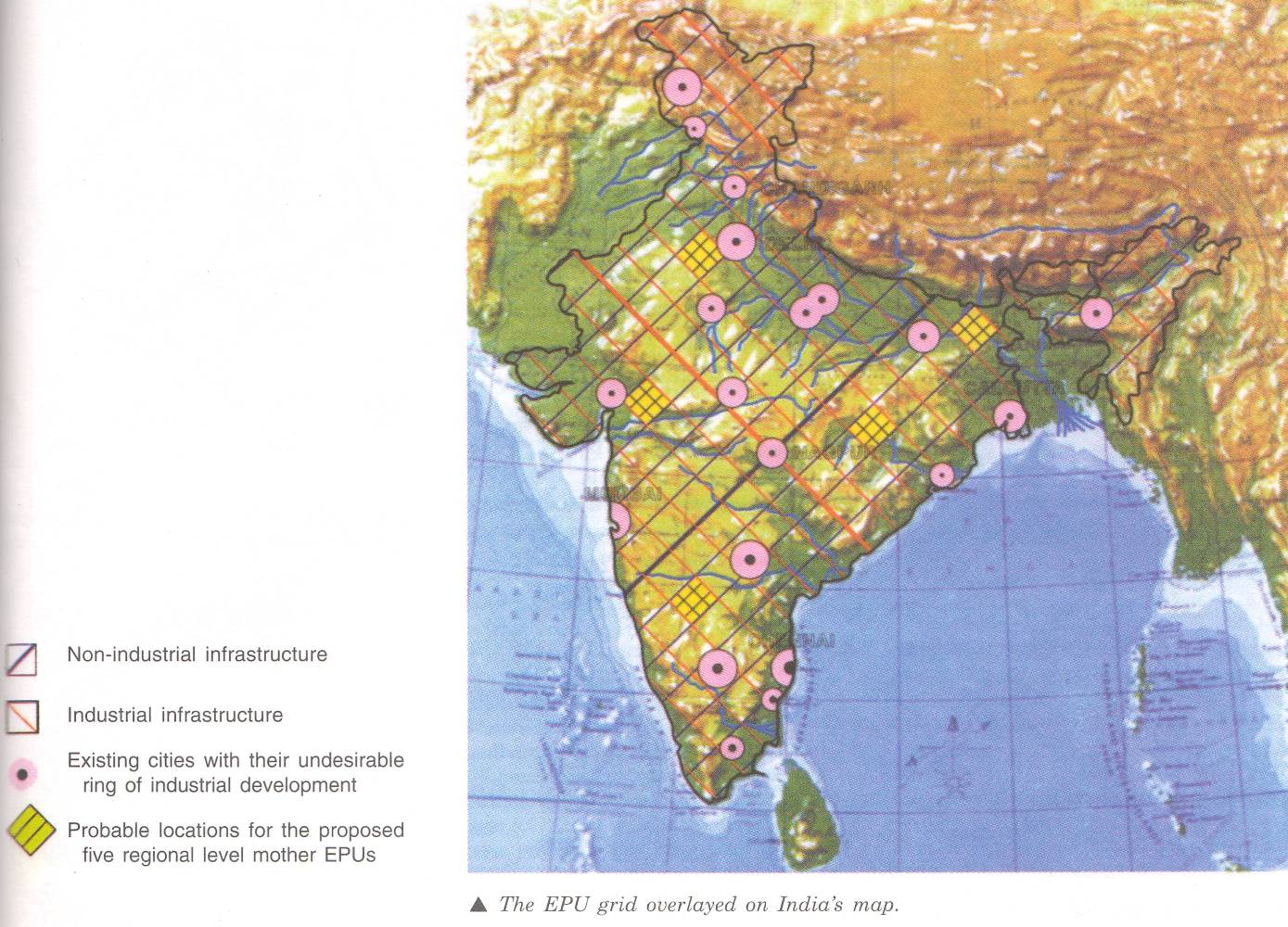 This EPU shall provide moderate and healthy living and working conditions to all its inhabitants. Each unit will have a personality of its own, very much in keeping with the diversity which is so typical of this vast country.

Jeet Malhotra says, "In this debate, each Indian planner can contribute to make India more prosperous, balanced and healthy, via man-made architecture in harmony with nature's architecture during the third millennium. Such efforts will be, in the final analysis, the real tribute to Le Corbusier and his theory of The Three Human Establishments". 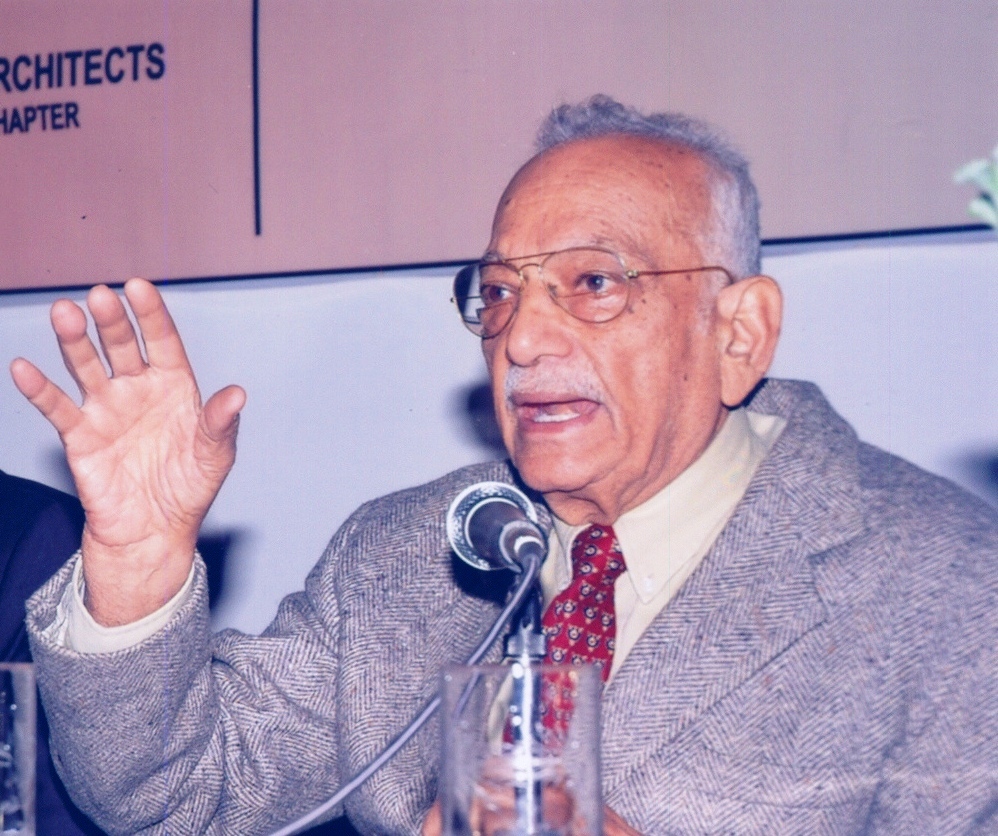 Architect Jeet Malhotra (born 1929) has worked with Otto Koenigsberger, a world renowned town planner from 1949 to 1951, and also worked on UN project of League of Nations in Geneva with Charlottee Perriand. From 1951-1966 he worked on Chandigarh Capital project in close association with Le Corbusier, Pierre Jeanneret, Maxwell Fry and Jane Drew. He remained Chief Architect, Punjab from 1981 to 1985, and Chief Architect, New Delhi Municipal Corporation from 1985 to 1987. In addition to this Jeet Malhotra served as President, Indian Council of Architecture from 1984 to 1987. During his long career he has designed numerous projects. Many of his works are published in almost all Indian Journals and International publications like Encyclopaedia of Modern Art & Architecture, London, Architectural Forum, New York, Architecture of Today, Paris. He Evolved the concept of “Environmental Planning Unit” for the development of India.

All images courtesy of Jeet Malhotra

(Author has the privilege to work with Jeet Malhotra closely and has long association with him since 1980).

> via personal interaction with Jeet Malhotra