An interview with Alireza Taghaboni, The RA Dorfman Award Winner, About their upcoming projects

In this exclusive interview, we talk about the upcoming projects of Alireza Taghaboni's firm, Next Office. The firm won the 2018 Royal Academy Dorfman Award, one of the most prestigious prizes in the field of architecture in 2018. You can read more about it here.

Alireza Taghaboni, the respected representative of the firm, gave a detailed information about the upcoming projects of Next Office. This article covers Guyim Vault House, Sadra Artist Forum, and Sadra Civic Center in detail.

Farzam Kharvari: As we know Guyim Vault House is located in Guyim Village in Fars province of Iran and it is going to be completed in the next two years. I would like to start by asking you a general question about this project. What were your primary concerns in designing Guyim Vault House?

Next Office: In the Guyim Vault House, the preliminary question arises as to how the arcade structure can be developed in such a way as to embrace a cubic shape space? In other words, how can a volume with cubic shape boundaries, inspired by the Chahartaqi structure, separate the space into sub-spaces and derive its construction solution simultaneously? Are these dome-shaped structures capable of responding to create public and private zones inside the house? And finally what are the features of this dual scheme characteristic? 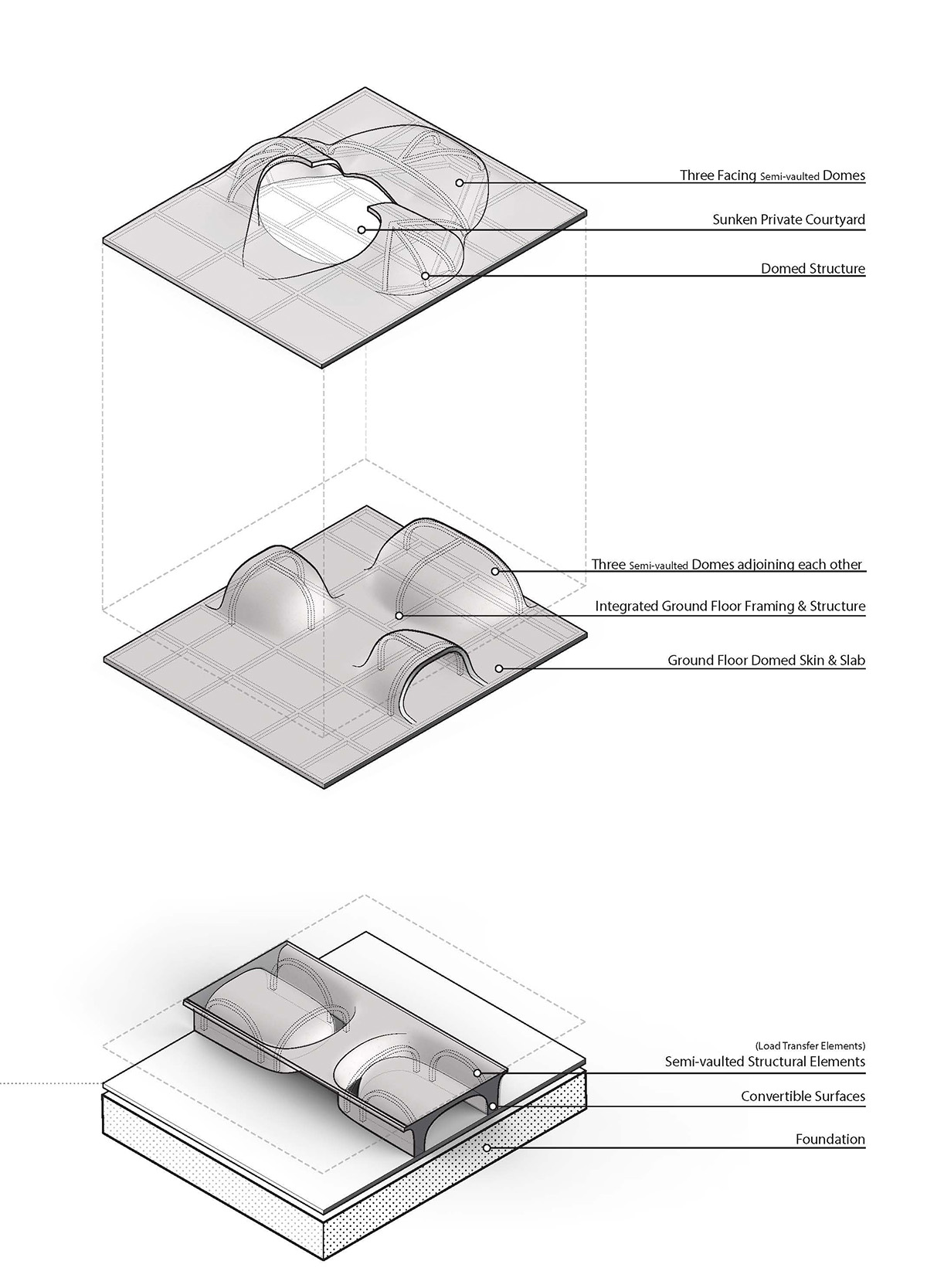 Farzam Kharvari: What were your responses to all those questions? How does the design resemble the answers of the questions that you were looking for?

Next Office: In the layout of the house, the inflated plates, which are formed by the arcade structures, are converted into the dome-shaped assembly. In this respect, on the ground floor, the semi-vaulted volumes adjoining each other to create enclosed and semi-enclosed spaces. Accordingly, three half-dome edifices are placed inside the house, back to back, within the cubic glass envelope. This particular strategy in massing arrangement comprises a kitchen, mudroom by the entrance and the guest room. The intermediary, fluid space in-between the half-domed assemblies deliberated as the public interior zone of the house. On this floor, all enclosures are transparent except for the unsolidified micro-spaces, which are making a direct connection to the garden. 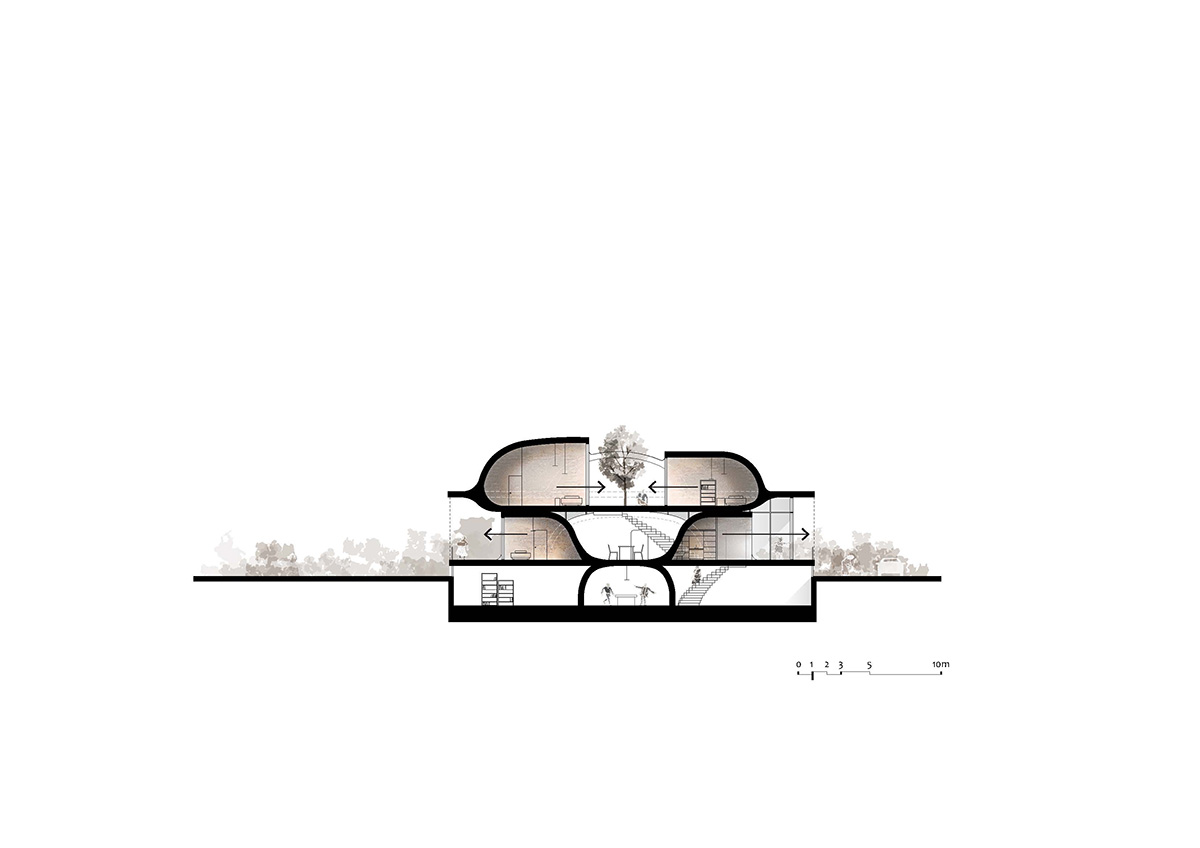 On the contrary, on the first floor, three half-dome edifices are facing each other, creating a sunken central courtyard that corresponds to the private life of the inhabitants on this floor, nearby bedrooms. In this area, the connection to outdoor space is made out through the semi-enclosed courtyard. 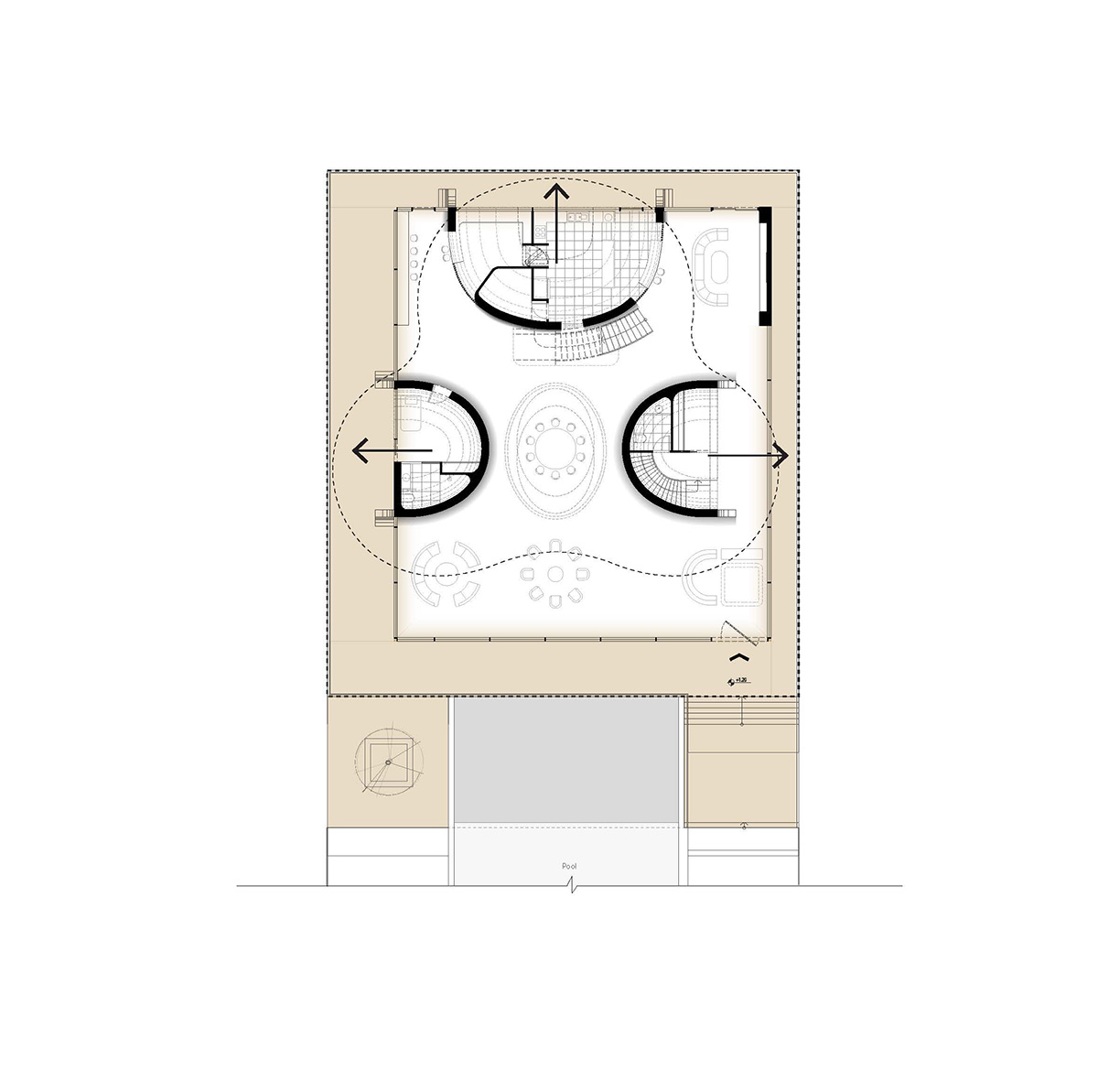 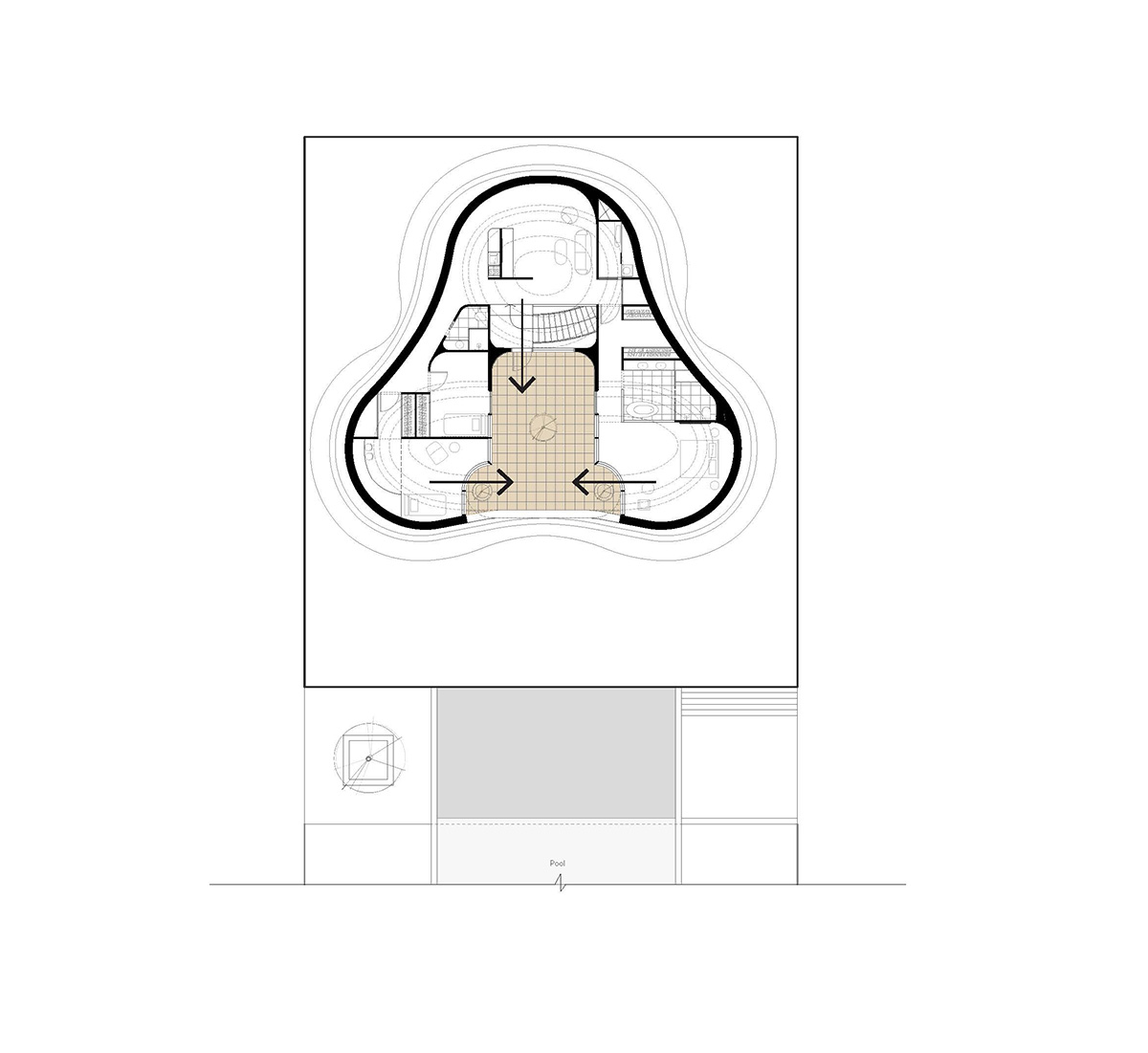 Farzam Kharvari: How would you conclude this project?

Next Office: In conclusion, in this project, the indefinite and ambiguous boundary between inside and outside is formed differently on each floor. The half-dome edifices assembled on top of each other on the upper and lower levels - they are reliant on the Chahartaqi structural system for transmitting the structural load to footings. This skeletal system creates a hybrid spatial quality, which stands between the cube form and dome-shaped unit. 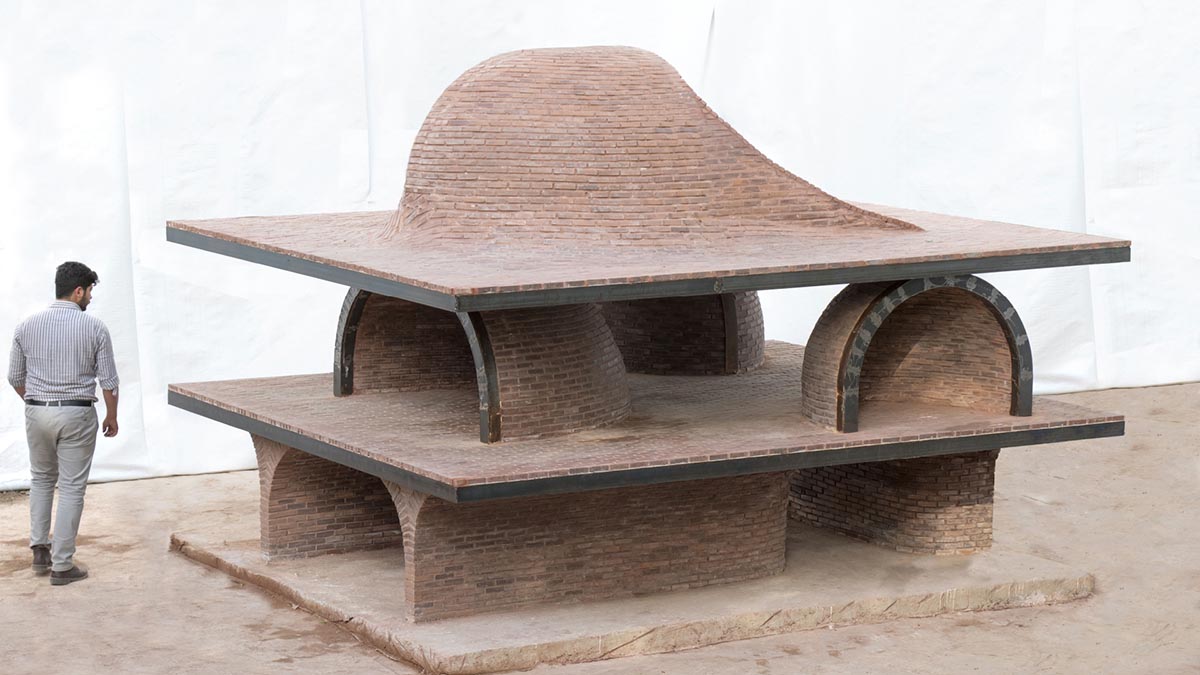 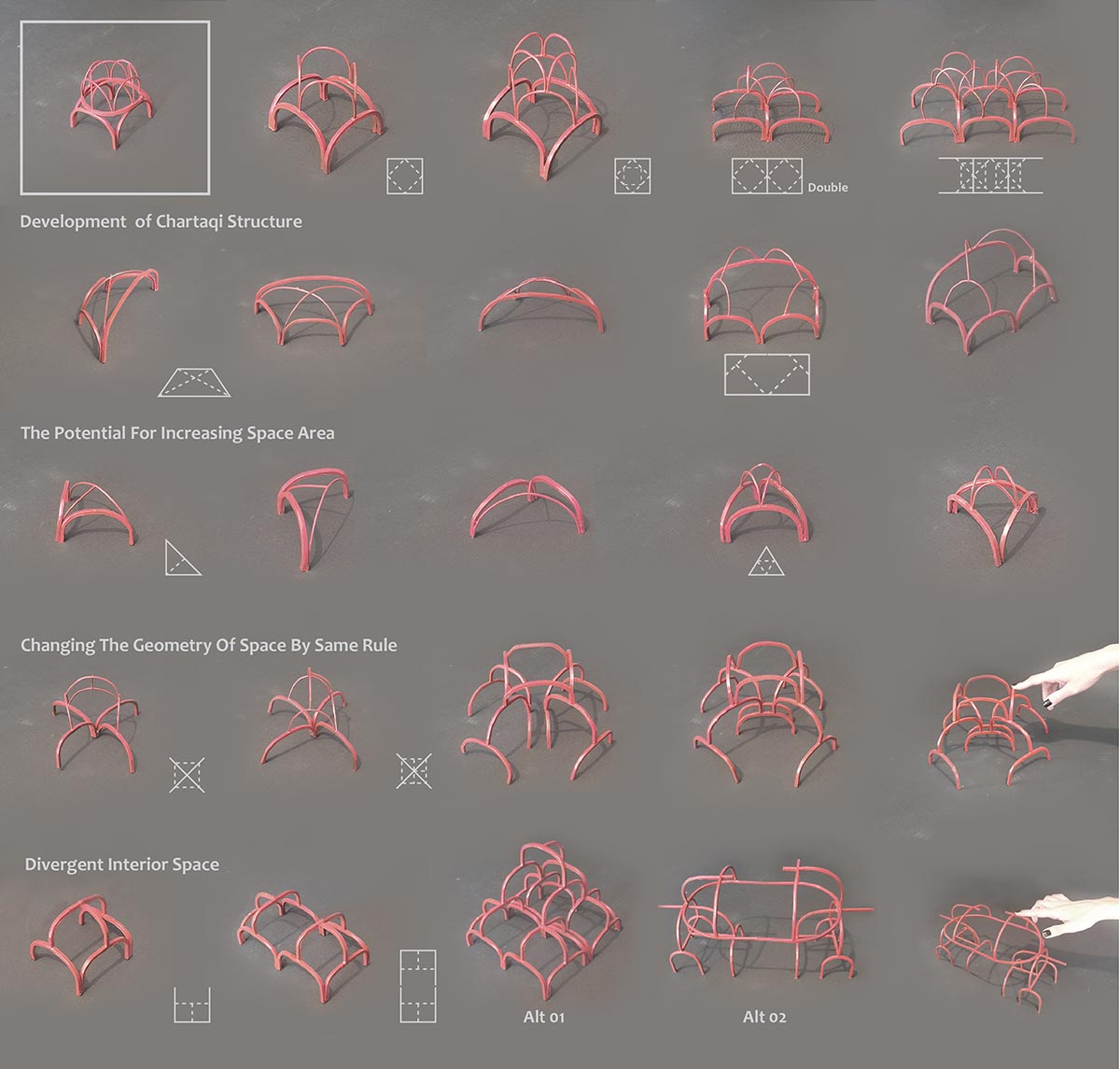 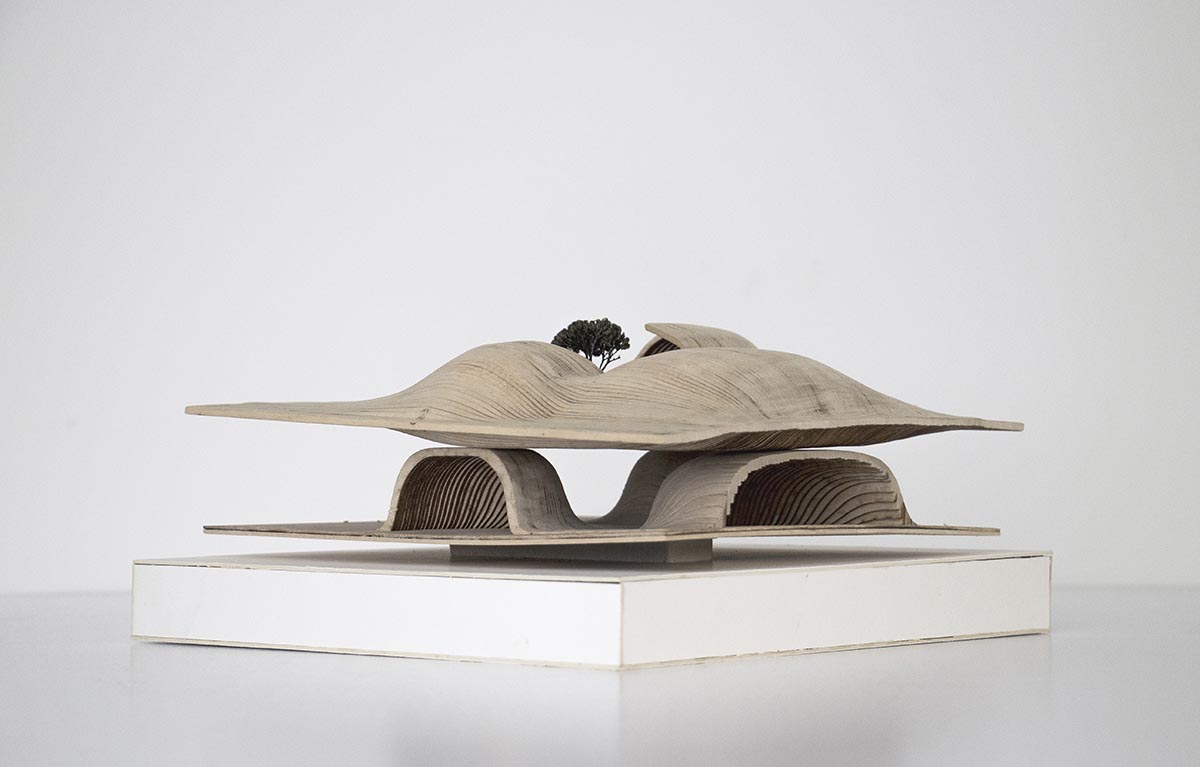 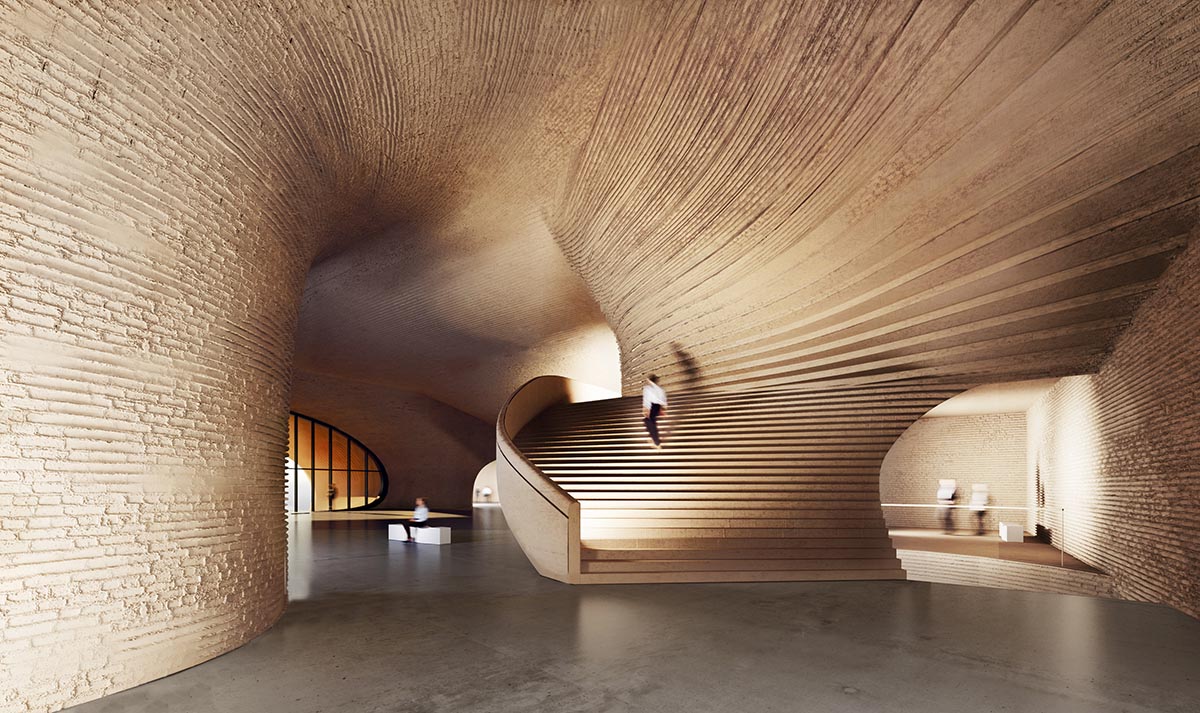 Farzam Kharvari: Thank you and let’s move to the other project. One of your fascinating upcoming projects is Sadra Artist Forum in Sadra Suburban City, Iran. When do you expect the project to be completed?

Next Office: Sadra Artist Forum is a project for the government and with the current economic and political situation of the country we don’t have any specific date for the construction. 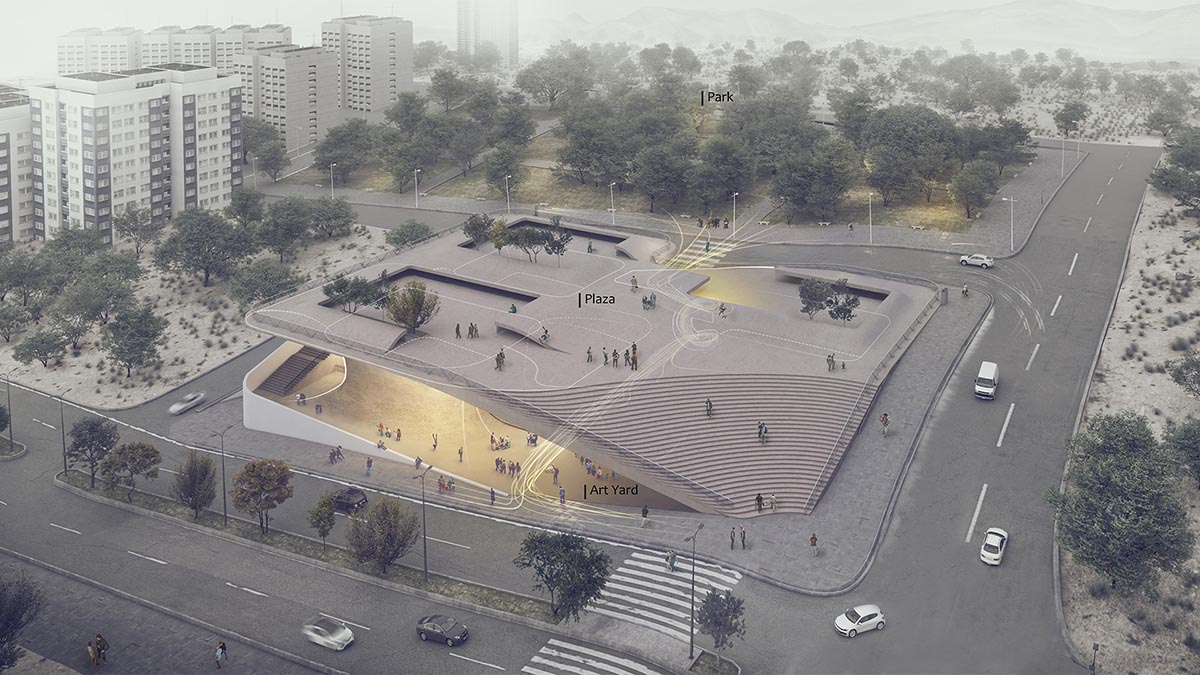 Farzam Kharvari: So, would you please tell us more about the project, its goals, and its context?

Next Office: As a public building located in the arid suburban context, the goal is to enhance the quality of people’s cultural life, in the newly built suburban town of Sadra, in the ancient province of Fars; the city is located not far away from the old city of Shiraz, Iran. In this regard, several cultural projects with the original aesthetic theme are planned to be implemented in the principal axes of the town. In most of these projects, the public and interactive spaces play an essential role in defining the massing strategy. In doing so, in Sadra city’s Artist Forum project, the architect is determining a new experimental meaning concerning the term common (in reality).

Farzam Kharvari: So what were your architectural solutions for achieving to your intended purposes?

Next Office: The entire building is located on the lower level compared to the surrounding public urban area to expose a unique architectural theme. This specific characteristic in the scheme of the project creates tremendous potential for shaping the shared inner and outer spaces. In this regard, several cohesive indoor and outdoor areas with the unique atmosphere are being offered by this project.

By reviewing different scenarios, the design team comes up with the idea of cumulative public spaces with four different mixed-use situations and spatial features. In this regard, the boundary between outside and inside was diminished to propose unlimited flexibility within the project’s flexible zones. The exterior milieu provides a unique space for artists to engage in public events with regular people, who use the public park. Nevertheless, the interior spaces offer the more private, interactive, and “leeway” typology for the building’s inhabitants. 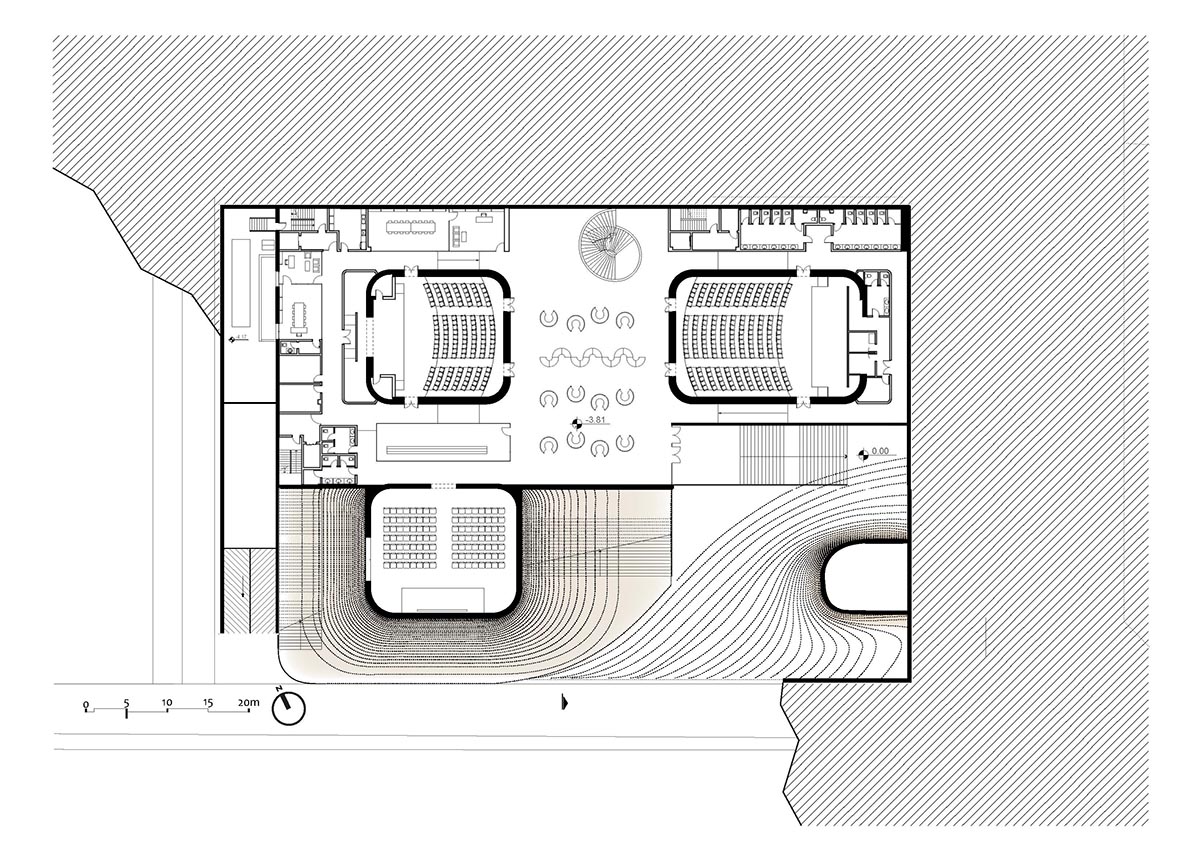 1. To provide the liberated environment to reduce the level of interference with the ideological atmosphere of the country, affecting by the official representatives over the site.

2. Creating the demographic spectrum with multi-functional free subspaces for the use of the generation Y, in Iran. These spaces are dedicated to daily activities and connected to the public park’s open area (s).

Furthermore, the form and function of the “three-core structures,” which contains the amphitheater and educational zone, were defined as essential elements erected from the basement to the top floors. In the first floor, the gallery spaces as the event-centered, public areas are represented by essential "three-core structures." Also, the “three-core structures” create a comprehensive scheme to adjoin the entire building as a unified component on the site. In other words, the three packet cells offer enclosed, limited spaces in the plan with the fluid, semi-private, and unbound characteristic. (Refer to the diagram of the project) 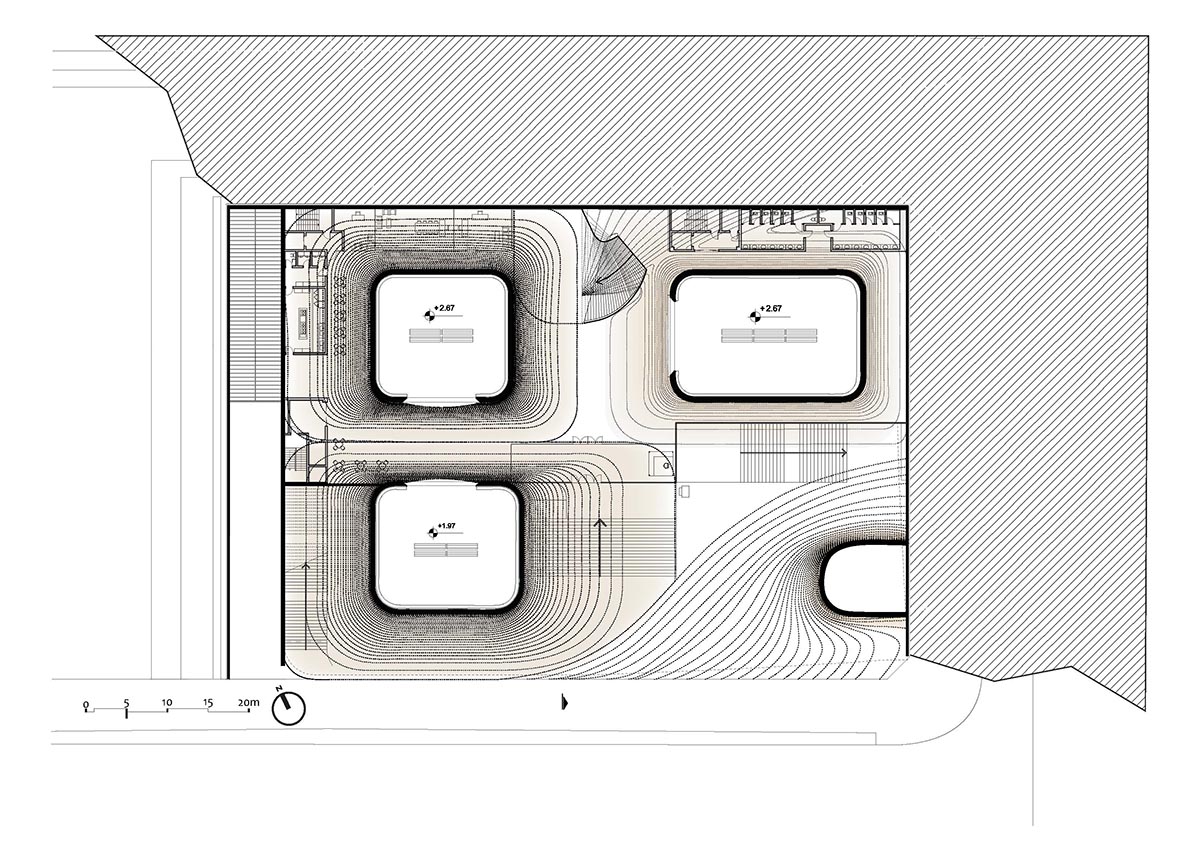 The molding procedure of the three significant (concrete) structural modules that define the whole project as a unified unit, inspired by the traditional techniques for constructing of the masonry bearing walls and vaulted brick ceiling, in ancient Persia. Regarding construction, the entire brick molding devices or partitions used to mount the "three-core structures" out of concrete. Once pouring the concrete into the brick walls as molding devices, the brick walls remove by the labors. And as a result, the real concrete structure shapes and the brick texture imprint on the outer surface(s) of the concrete edifices. This method is cost-effective compared to other advanced techniques such as using steel, wooden, and polyurethane molding system; it also allows the smooth, firm construction. 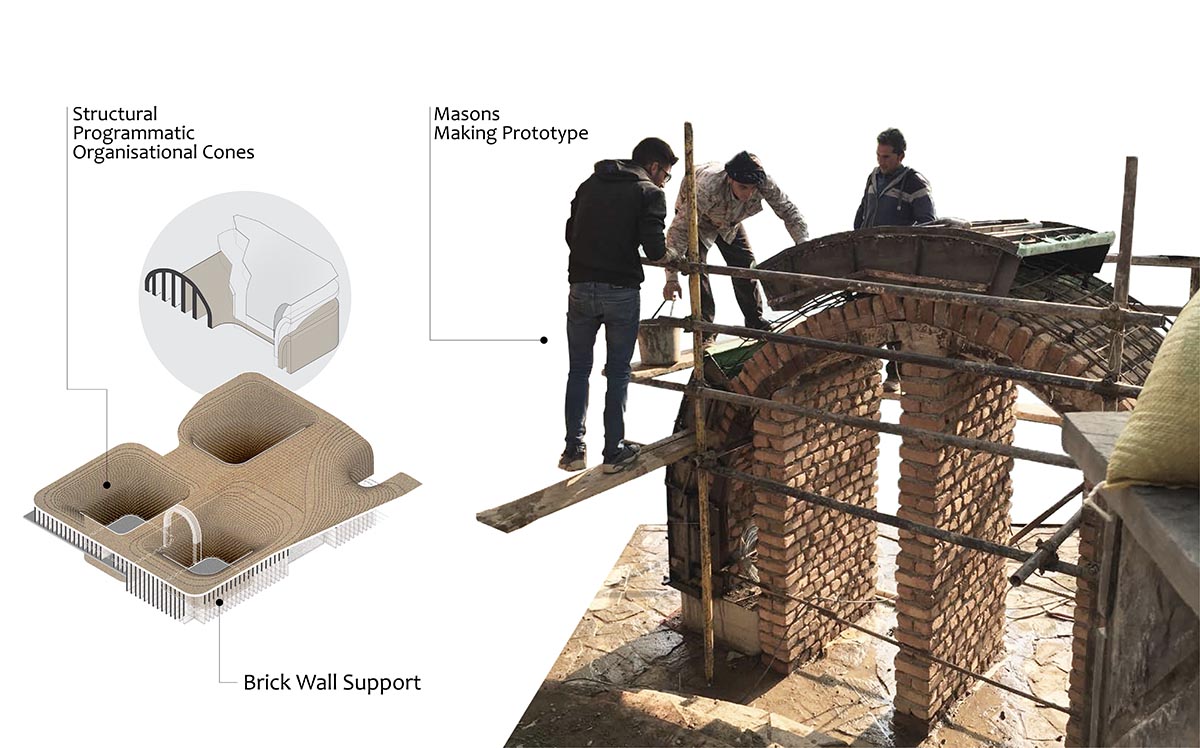 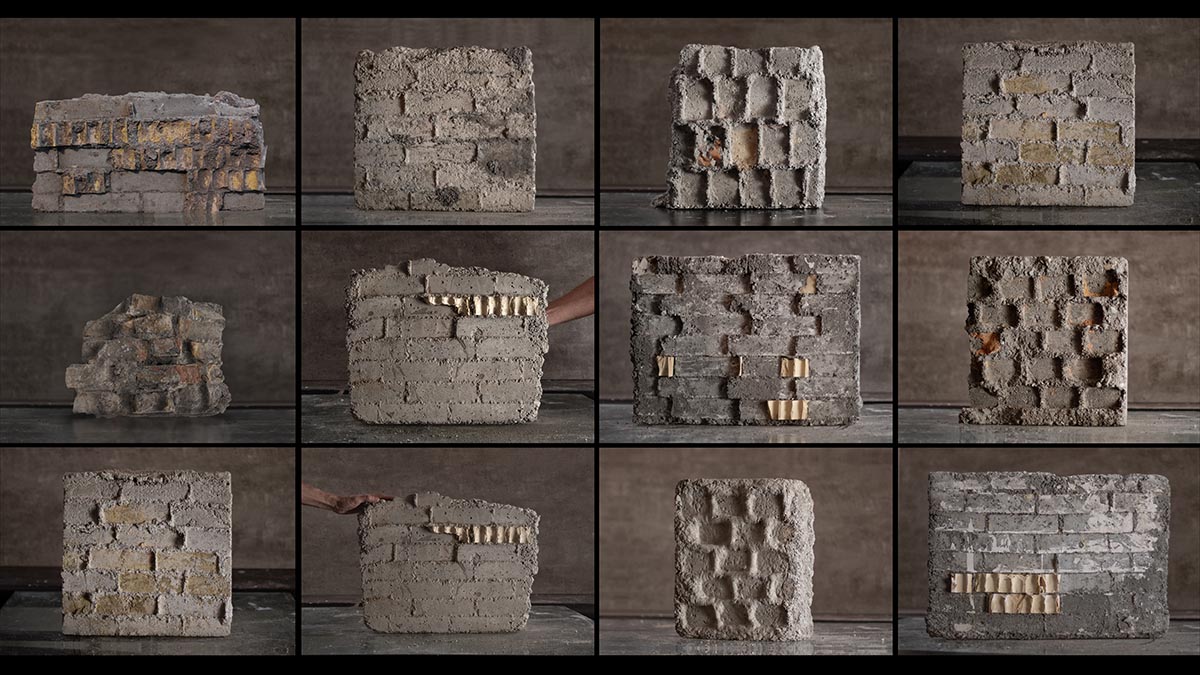 Farzam Kharvari: How would you define Sadra Artist Forum in conclusion?

Next Office: In conclusion, the Artist Forum project in Sadra suburban city attempts to combine and represent a different type of shared, tentative spaces with unique characteristic for a diverse group of people, in a way that each group can use them correctly. This specific design approach creates interaction between different classes of people in society. Moreover, the entire structure organized in full association with the geography and topography of the region and is in full compliance with the formal structural strategies. In short, the building attempts to set a milieu to transform the lifeless atmosphere of the Sadra suburban city into the thriving, inhabited commonplaces environment for daily life interactions. 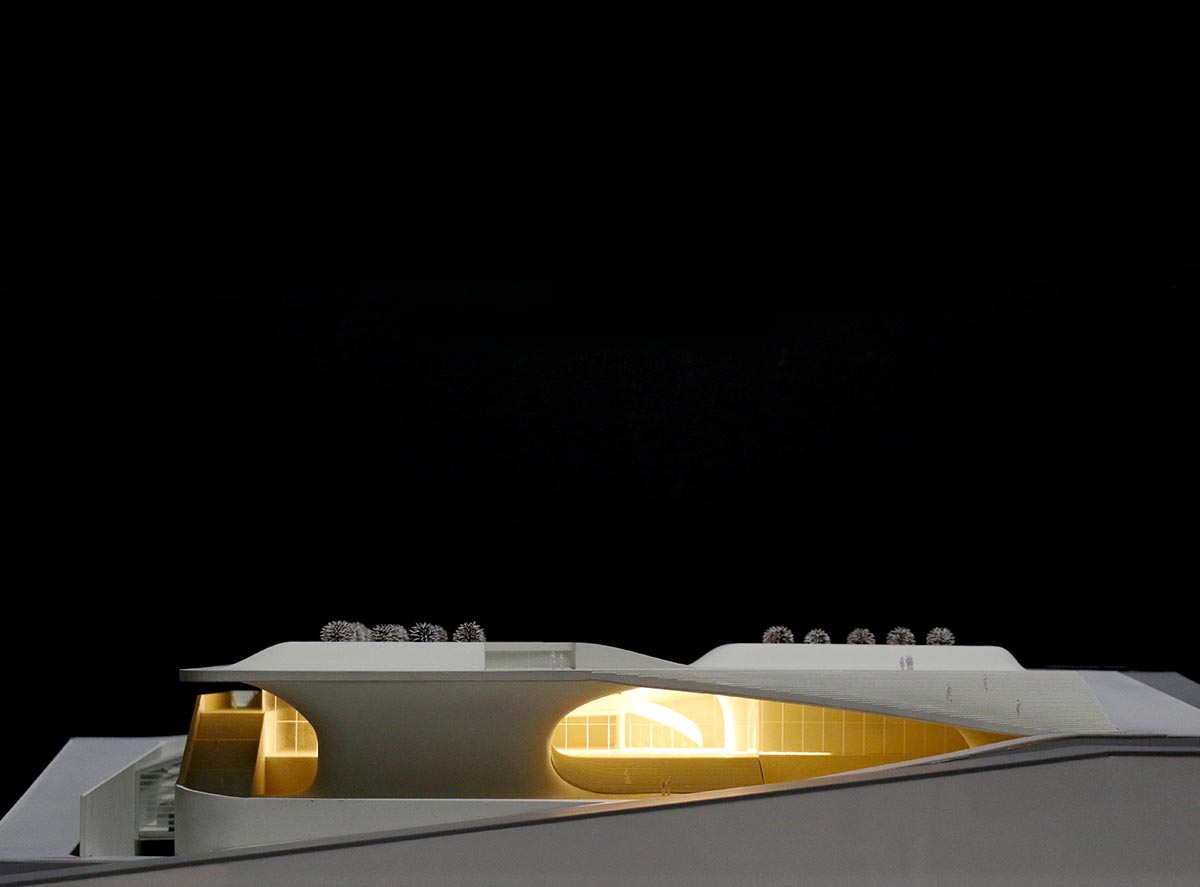 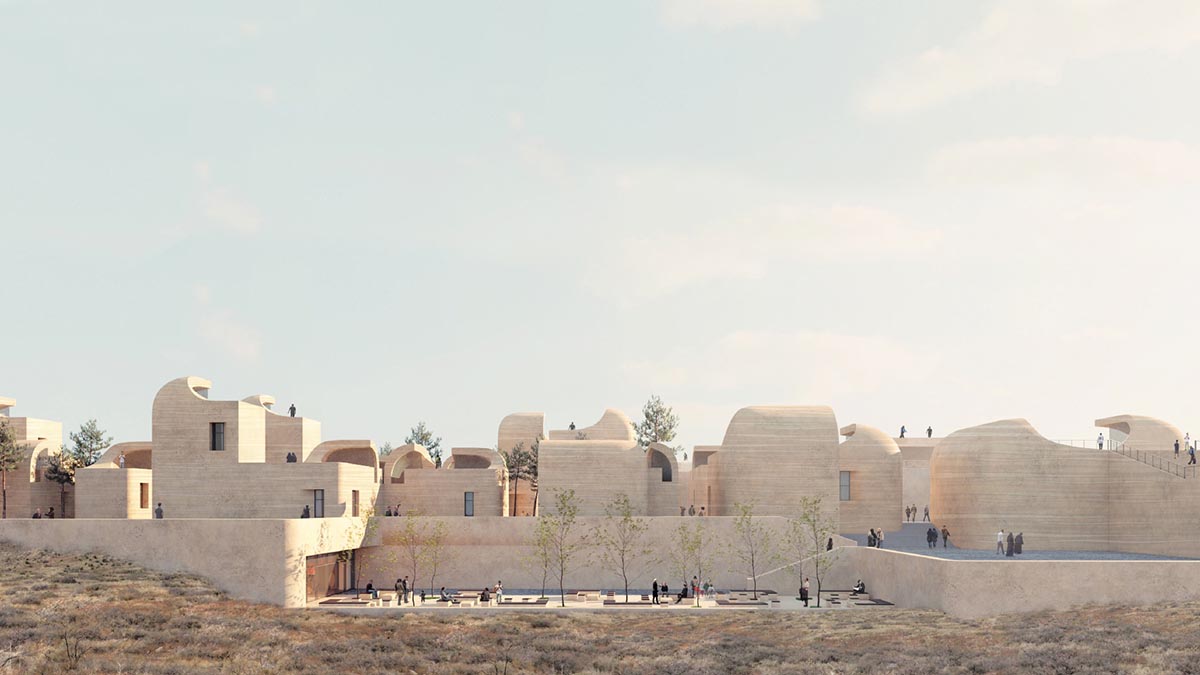 Farzam Kharvari: Thank you very much. I think the next project that we are going to talk about is designed in the same location as Sadra Artist Forum. But it was designed for a competition. So, would you please tell us more about Sadra Social Center?

Next Office: Sadra Social Centre was designed for a competition and we won the second prize. It has been designed in the newly-built town of Sadra with the purpose of raising the grade and cultural standards of this recently-formed town, which has practically turned into a subservient to a megacity like Shiraz as a result of its proximity to such a large city. For this reason, several thematically cultural projects have been designated in one of the major hubs of the town. The gradual expansion of a new town requires an adaptable and expandable spatial structure in order for it to hold the potentials for steady progression and excellence through time. At the same time, it gives rise to the question of how it is possible to constructively disengage with the familiar monumental clichés while preserving the iconic feature and effectiveness of public spaces. 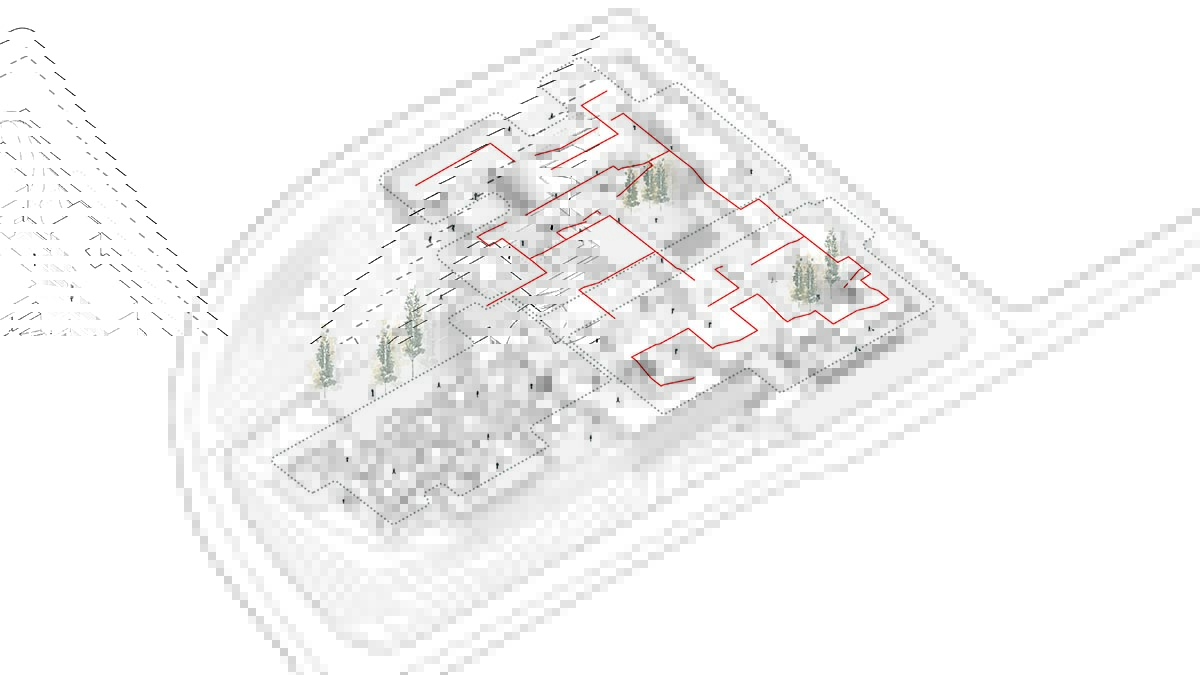 Farzam Kharvari: And, what was the driving force behind this project? How did you carry out the design?

Next Office: Owing to the resemblance of the response to these questions, we came up with the idea of creating a ‘town within a town’ to disintegrate the entirety and build a town out of urban components, volumes and spaces. The semi-open and adaptable spaces assume various themes such as passion plays, narrations, music, games, and so forth based on diverse social events which not only form a free-flowing channel of communal access and unity, but they also prepare an appropriate shade against the dazzling sunshine of the desert and make it possible to perform these activities. These are actually figures which despite structural resemblance and their being of a similar type, could adopt different shapes and forms. There could emerge a number of skylights which could further reveal their own cultural contexts in order for lucidity and diversity to be created along with order and asymmetry while a civil and social atmosphere could be set up in diverse social classes and divisions. 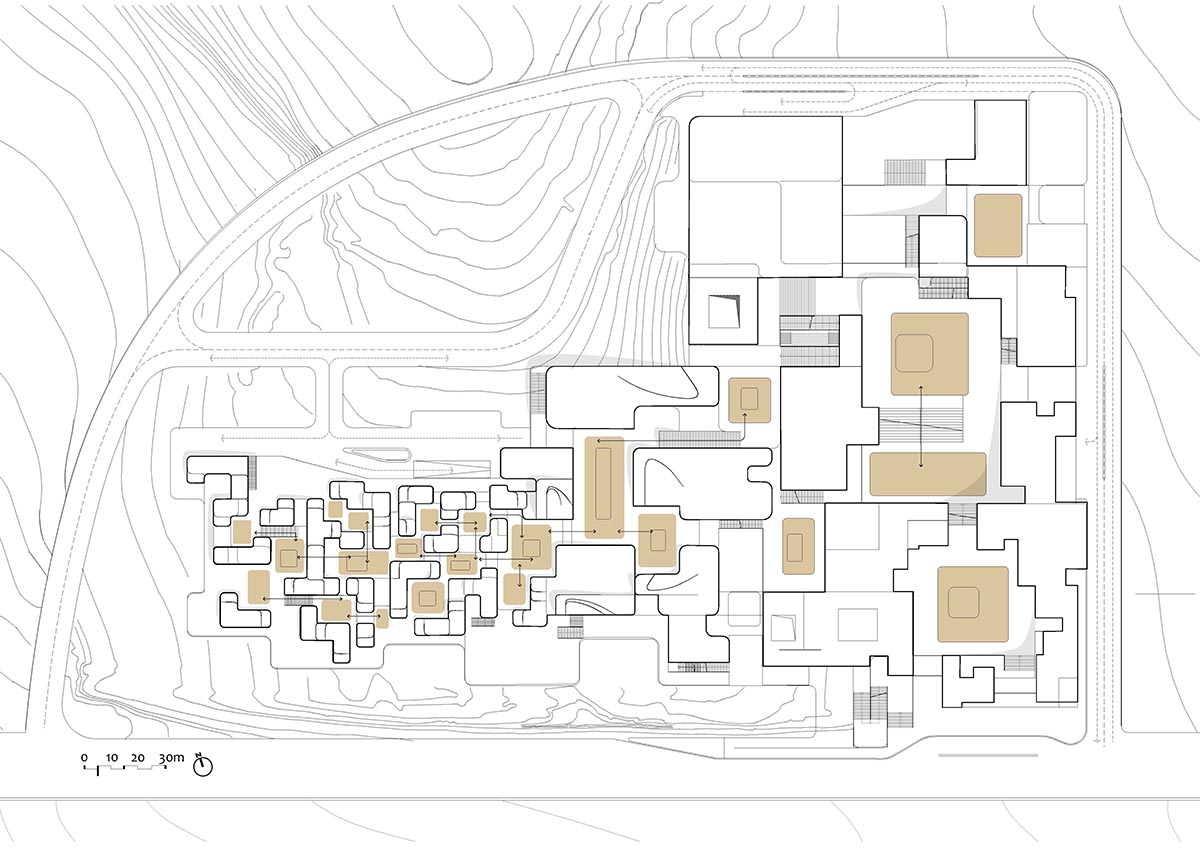 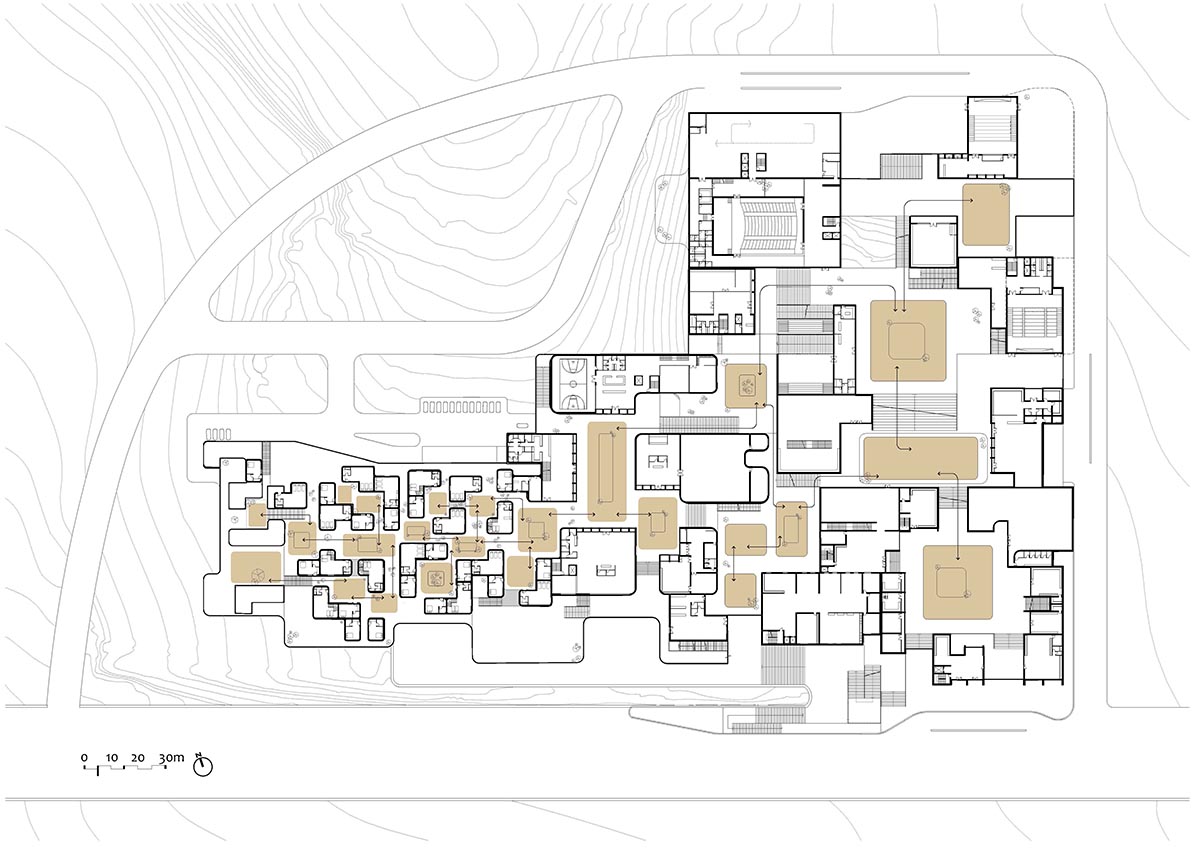 The design of the buildings and the created spaces accordingly correspond with their antecedents that were thatched with clay and straw as well as the constructions holding a courtyard. The process of transforming minor residential structures to the major ones of more public spaces takes place gradually along with the conversion in form and size. In major constructions, the ceilings have the potentials of being applicable, mobile and retractable and the tracks in which the movements take place are practically placed inside either or both levels of ceilings and/or floors in order for several civil and social-spatial strata within distinctive layers of separate social classes to be shaped inside these courtyards and routes. 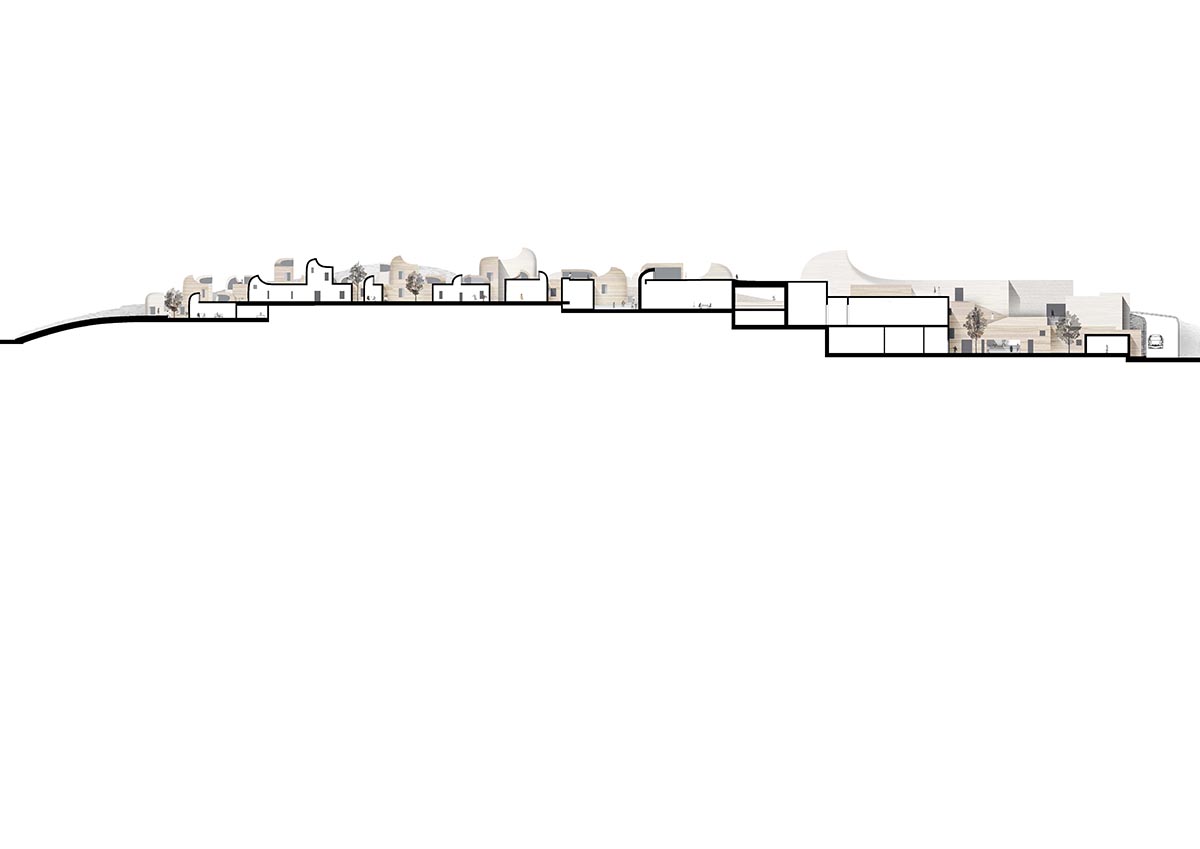 Farzam Kharvari: Any final notes you would like to add about this project?

Next office: Rammed Earth was the building method selected from among others as the best option for this project so that a material extracted from the same place could be applied to meet the requirements of the project itself. Due to the fact that construction is undertaken in only a part of the lot, the minimum excavation equally correlates with the backfilling. The fact that the construction process and executional phasing of this town-building project had the potential to be accomplished in the course of several separate intervals, contributes to the construction of the project in keeping with regional development and funding purposes and the culmination of the project is made possible over time. 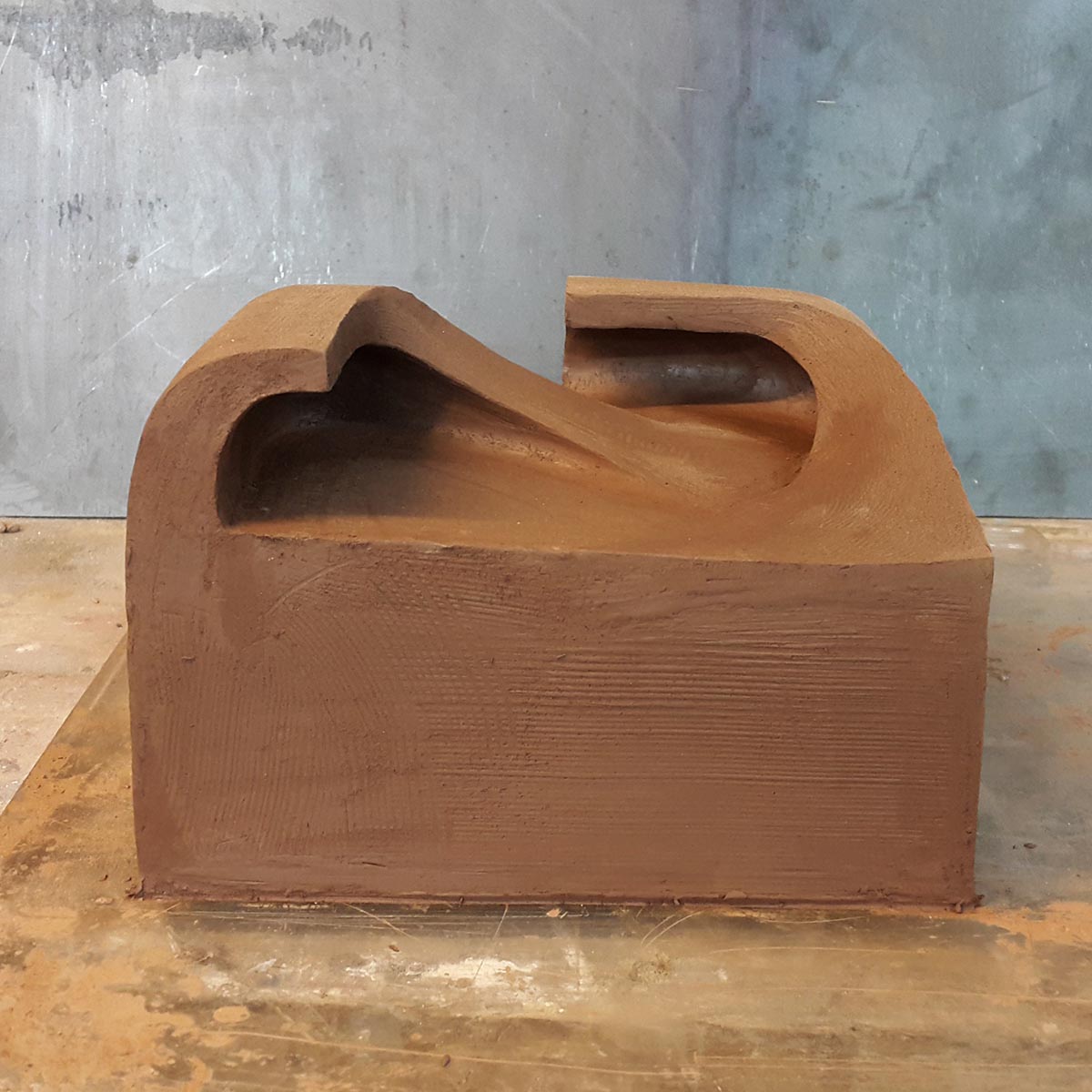 Farzam Kharvari: Thank you very much. We will be waiting for the completion of your projects and we wish you all the best.

All images courtesy of Next Office