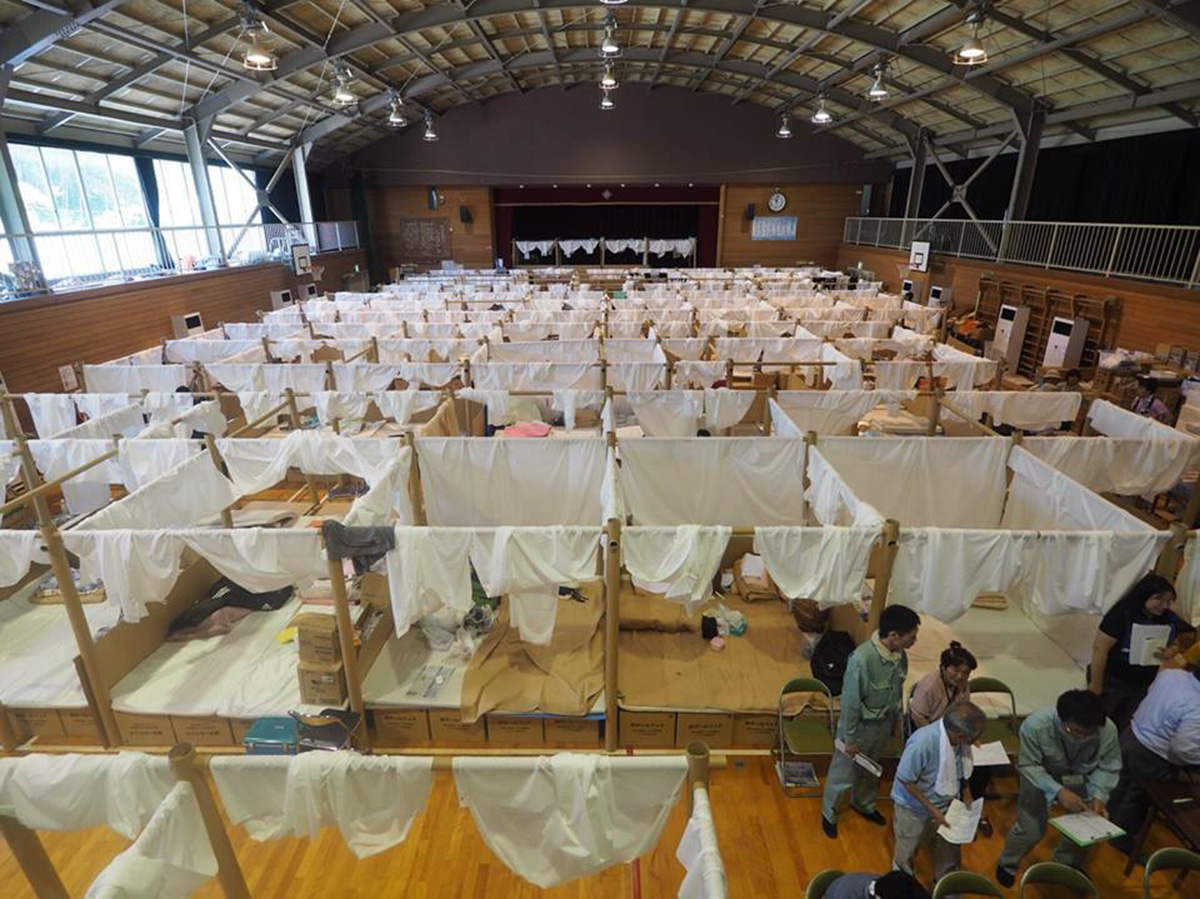 Pritzker Prize-winning architect Shigeru Ban has started to mobilize his Voluntary Architects’ Network (VAN) to provide temporary homes for the victims of recent devastating floods in Southern Japan. The devastating flooding and landslides hit the Southern Japan last week and at least 210 people have been killed due to heavy rains - the disaster is described as the "worst in decades".

Shigeru Ban, best known with his humanitarian architecture and efforts, and with members of the VAN and volunteer students have set up a new partition system by using paper tubes and cloth curtains to protect the privacy for each family, which is built as a modular unit of 2 meters by 2 meters. 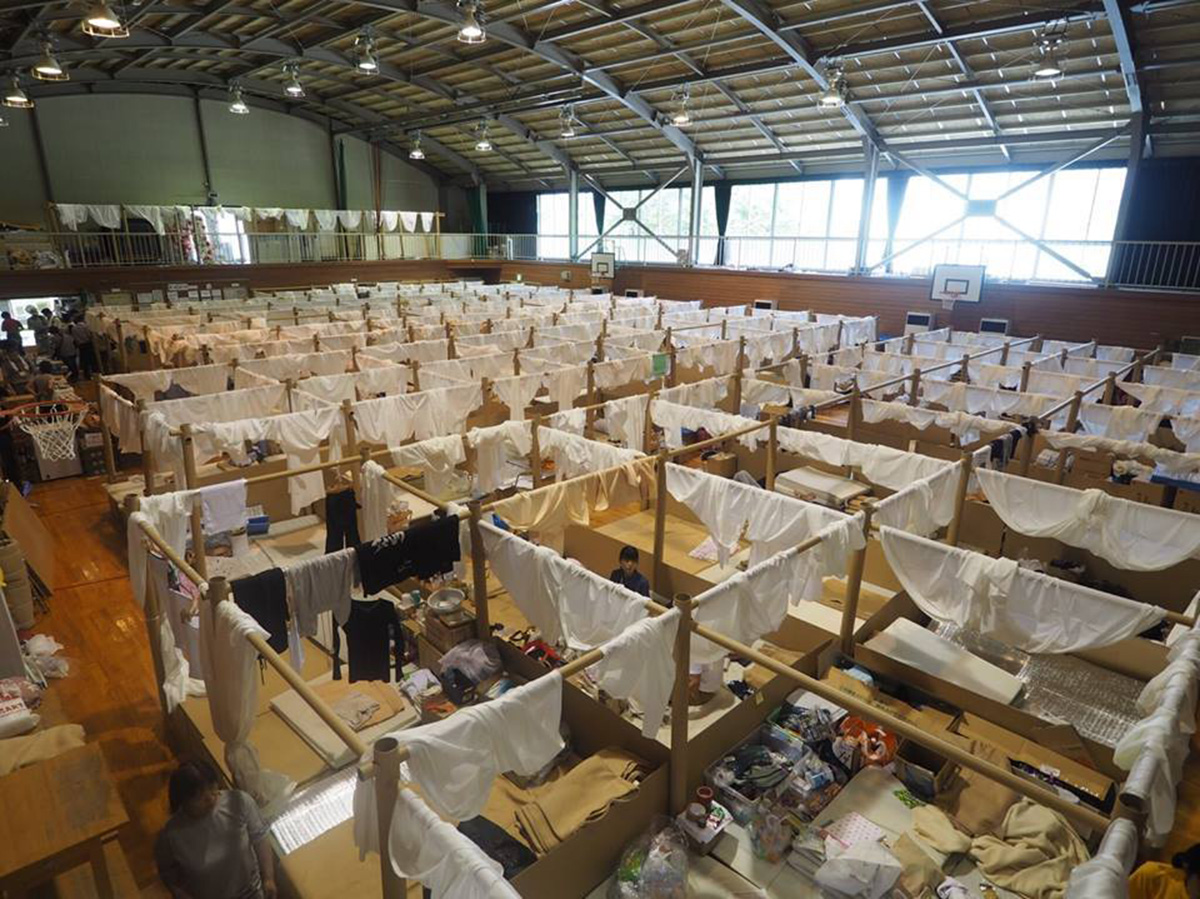 The temporary structure is not a new construction system applied by the architect, the Paper Partition System (PPS) was designed as a simple partitioning system for the purpose of protecting privacy in evacuation shelters, which was first developed after the 2004 Niigata Chuetsu Earthquake, known as PPS1.

"In large-scale disasters, many victims are forced to live without long-term privacy in a large space such as a gymnasium. However, evacuation centers without any privacy at all have a heavy burden on the victims, both mentally and physically," said Shigeru Ban. 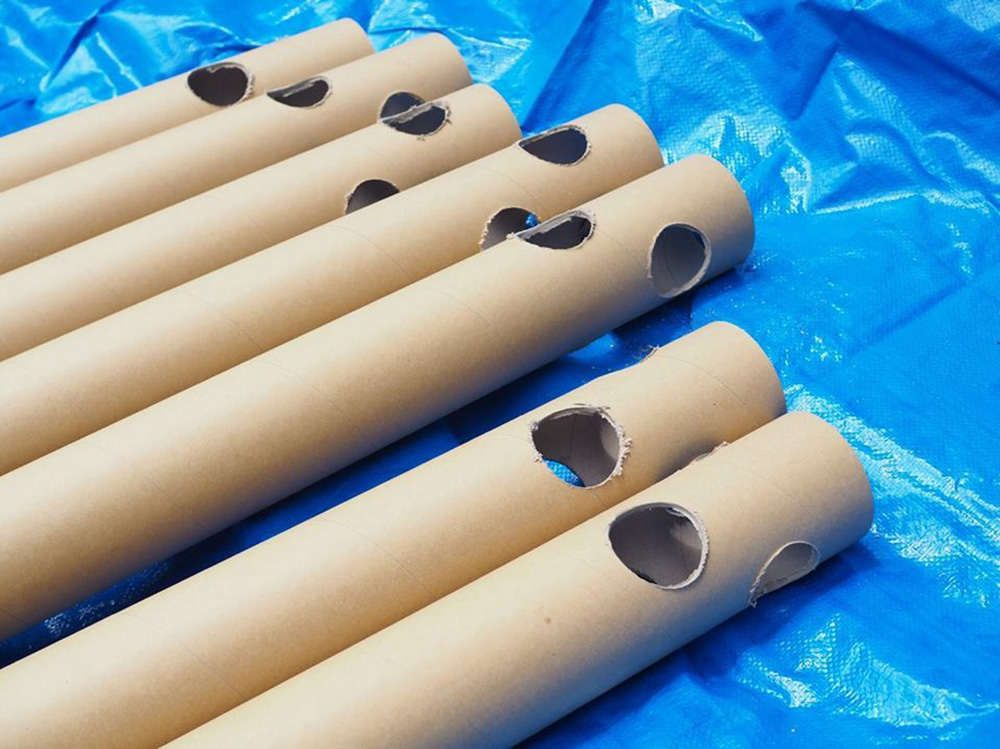 The architect and the VAN then applied the PPS2 in 2005 Fukuoka prefecture offshore earthquake, in 2007 Fujisawa city demonstration (PPS 3), and the team upgraded the system after the Great East Japan great earthquake disaster, and the PPS 4 was developed. 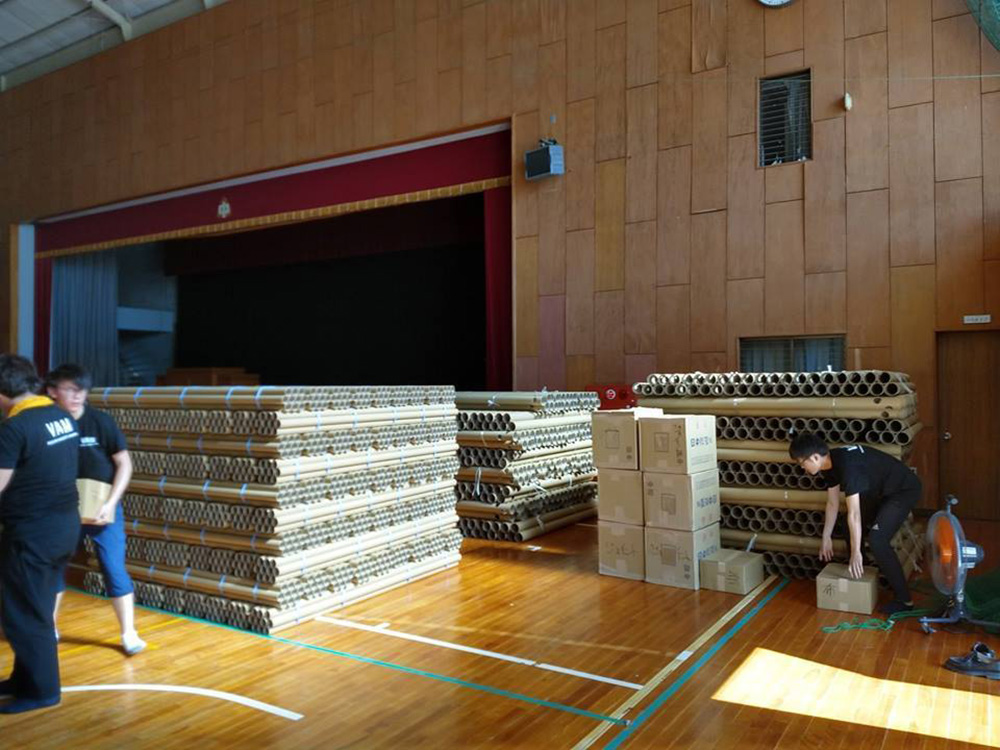 "In this PPS 4, it is simple to assemble a frame of a paper pipe made of columns and beams, and apply cloth for blindfold for each family on the beam. Because cloth can be opened and closed like a curtain, it can be opened during the day and closed only at bedtime. Assembling is very easy, and there are cases where volunteers and, in some cases, the evacuees themselves are set up," had said the architect.

"In the summer, a large number of insects such as mosquitoes and flies occurred in the afflicted area and had plagued the victims, so we installed a "mosquito net version" hanging mosquito net in the frame of the paper pipe." 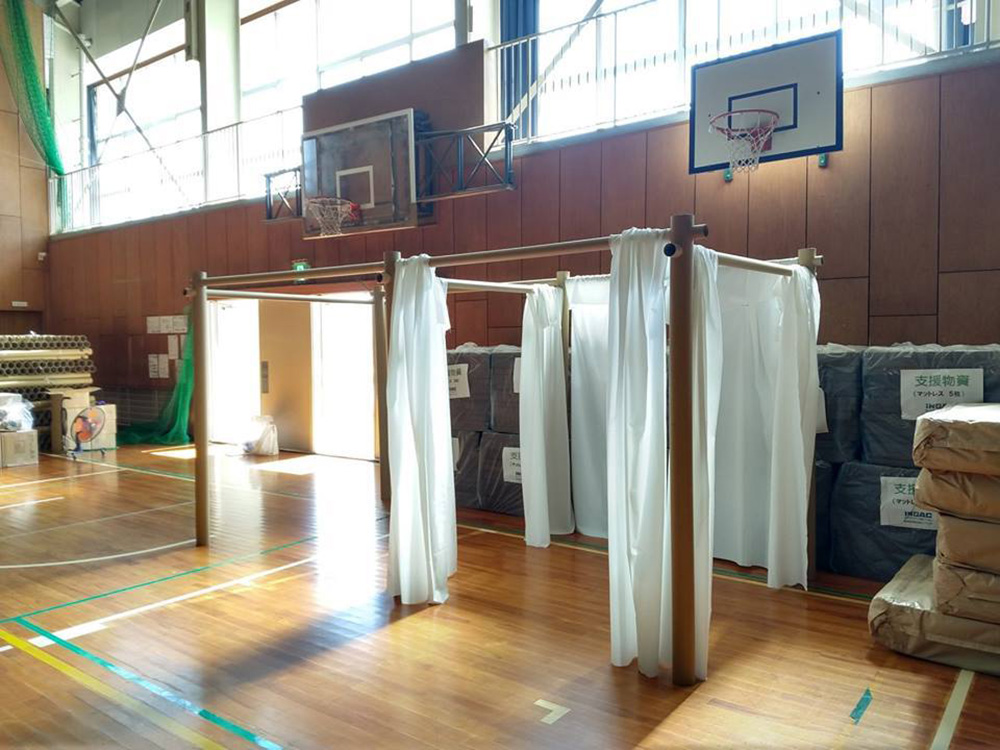 Ban's team established around 50 evacuation shelters and 1800 units of partitions, and these activities were all made with support money gathered from all over the world. 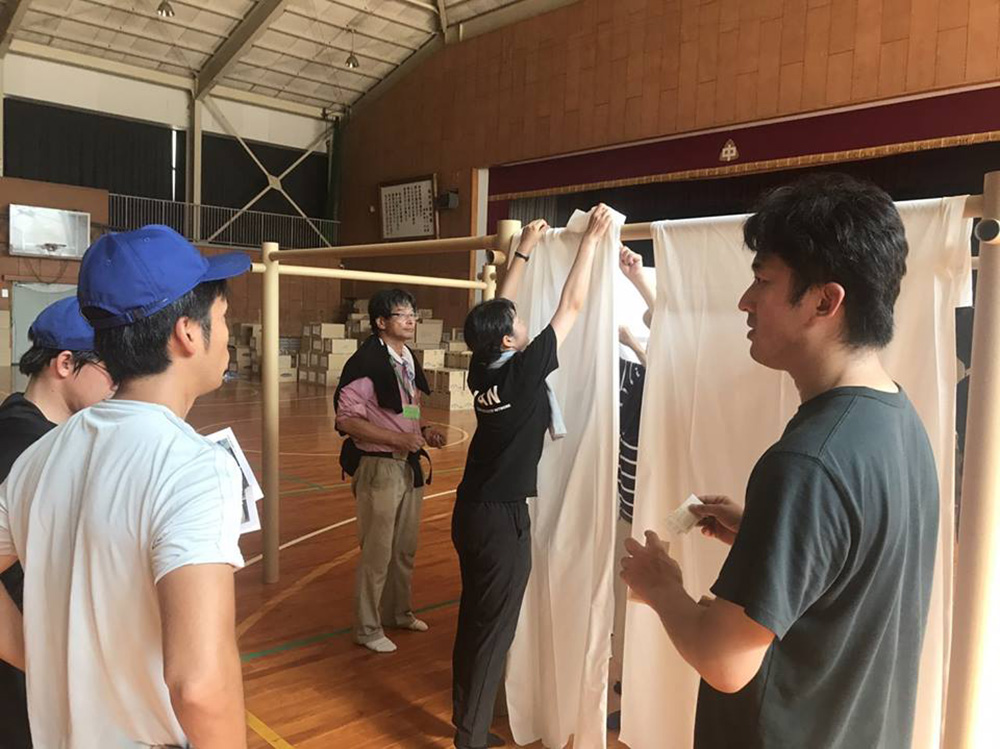 The voluntary architects from the VAN's network was divided into Hiroshima team and Okayama group starting from July 13th and 14th, and they started making paper partitioning system to protect the privacy of each family member of shelter.

The Okayama group was established at Sonogawa Elementary School, a shelter in Masaki-machi, Kurashiki City, and Hisyo Branch, a general evacuation center in the general corporation. The team has constructed100 units in the market town of Sonogashi, and 300 units in Hiroshima. 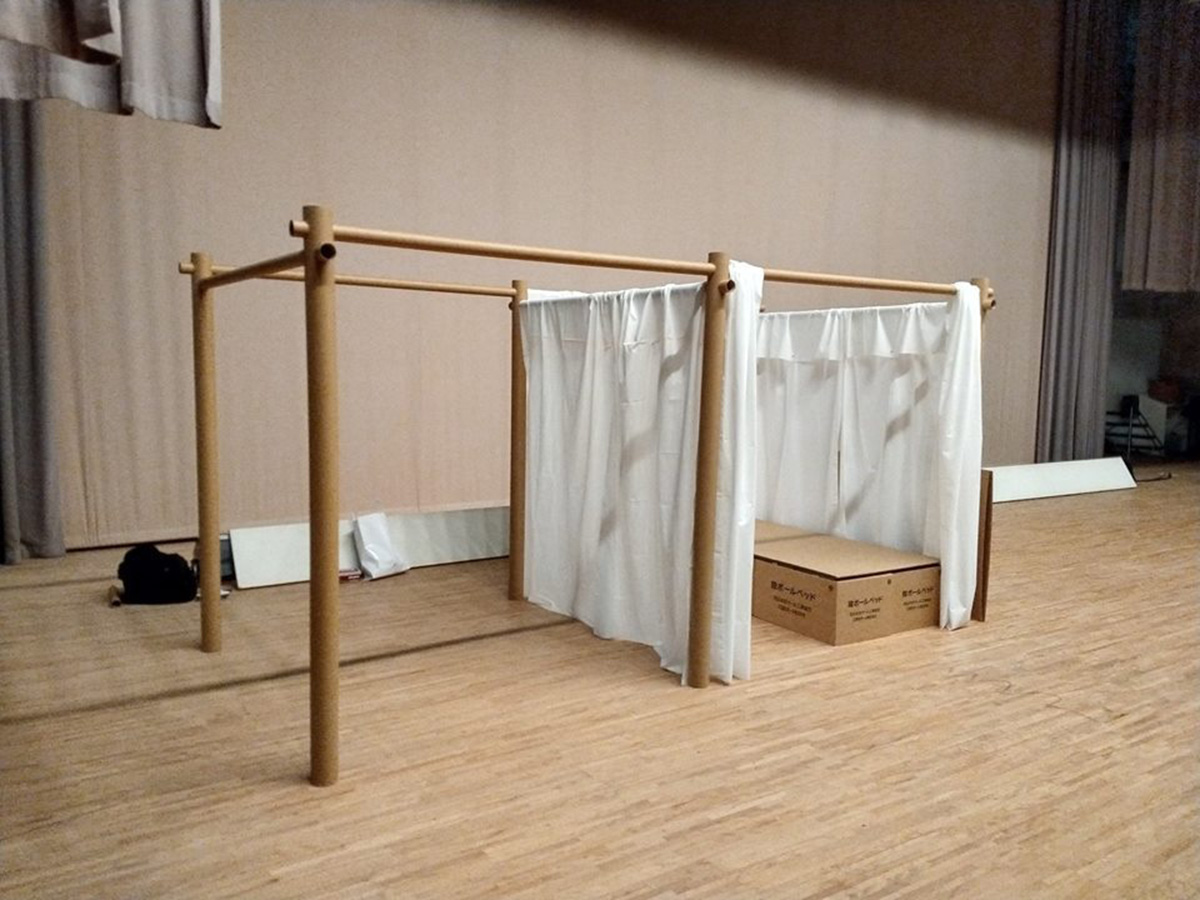 The construction system is made of small-middle-large sized paper tubes ,interlocking each other and used as supporting elements and partition elements. White cotton clothes are used to provide a simple room which keeps privacy for individuals. 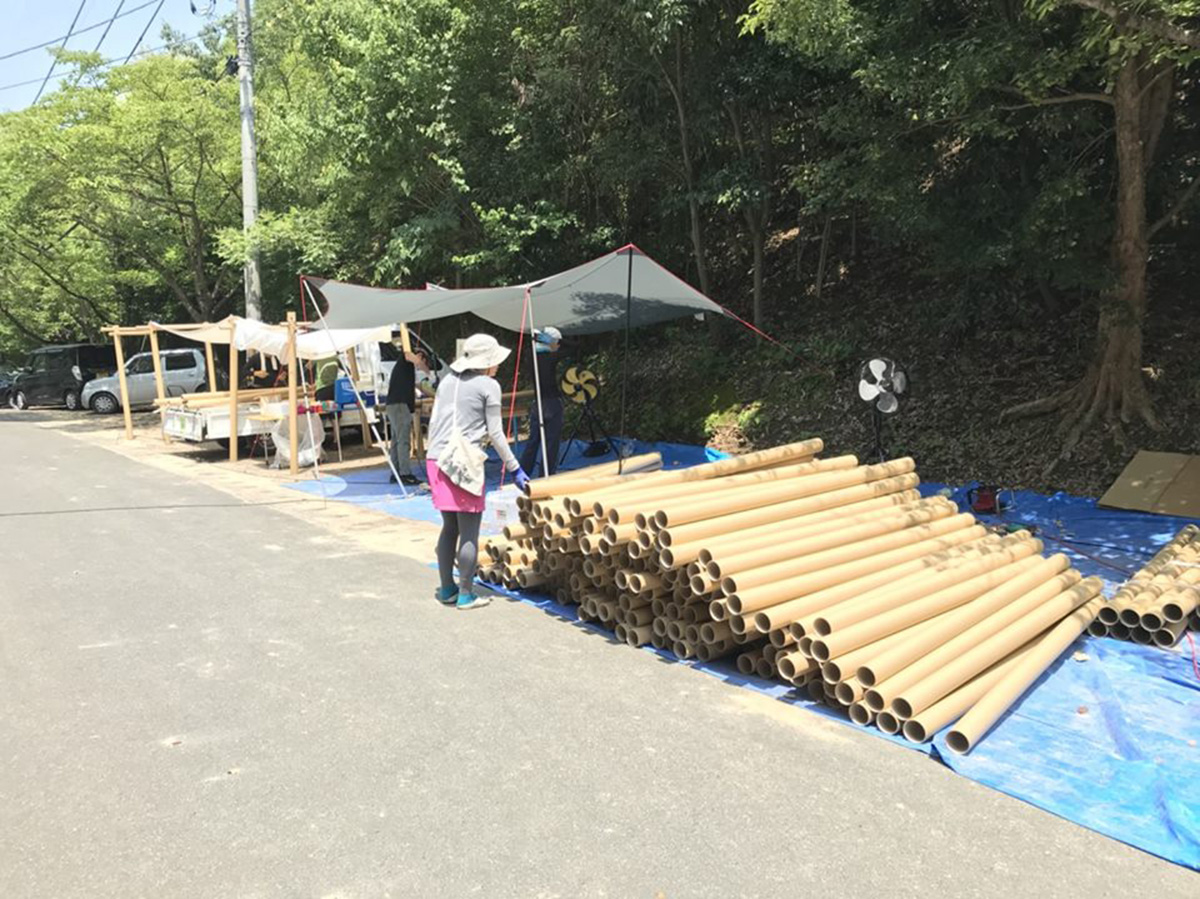 In 2017, Shigeru Ban, in collaboration with UN-Habitat, signed an agreement to design 20,000 new homes for refugees in the Kalobeyei Refugee Settlement in Kenya. At the end of December 2017, the architect won the 2017 Mother Teresa Memorial Award For Social Justice, Ban is the first Japanese architect winning this prestigious prize so far.