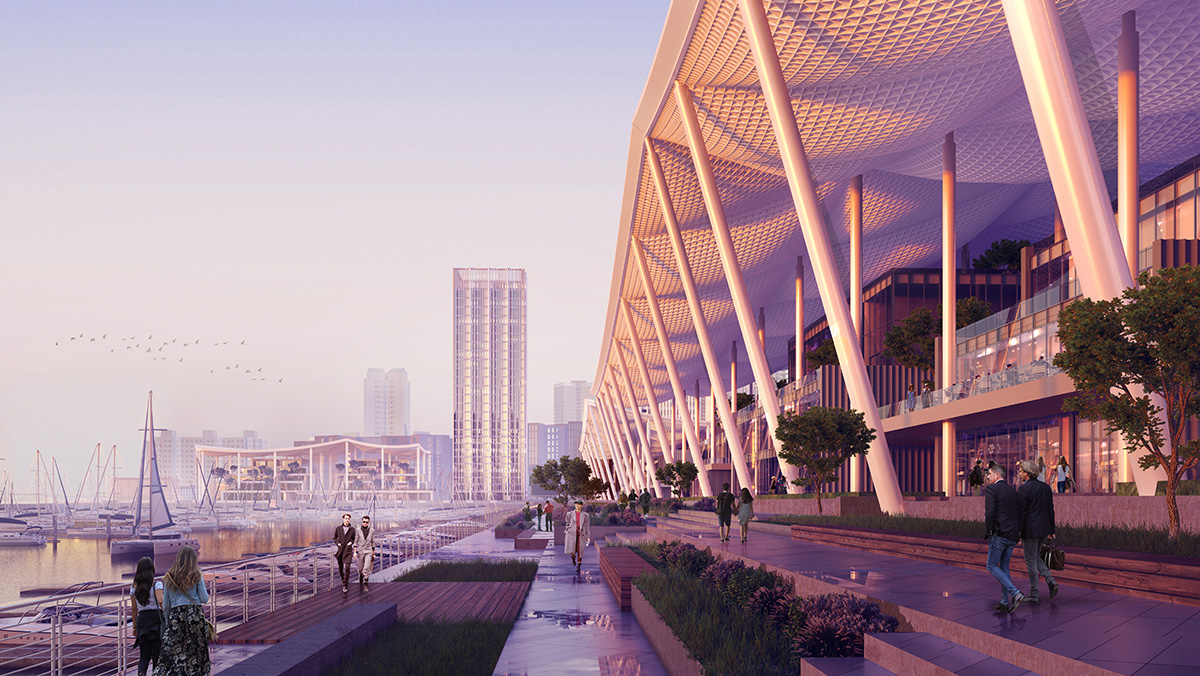 Skidmore, Owings & Merrill (SOM) has revealed images for a new waterfront neighborhood for Zhuhai in China, the city of Zhuhai has emerged as an eco-conscious city in the coastal region known as the Greater Bay Area.

Called Jiuzhou Bay, SOM will to transform the city’s waterfront and create a blueprint for future development. The global firm was selected from a shortlist of 10 global design firms to create Jiuzhou Bay. 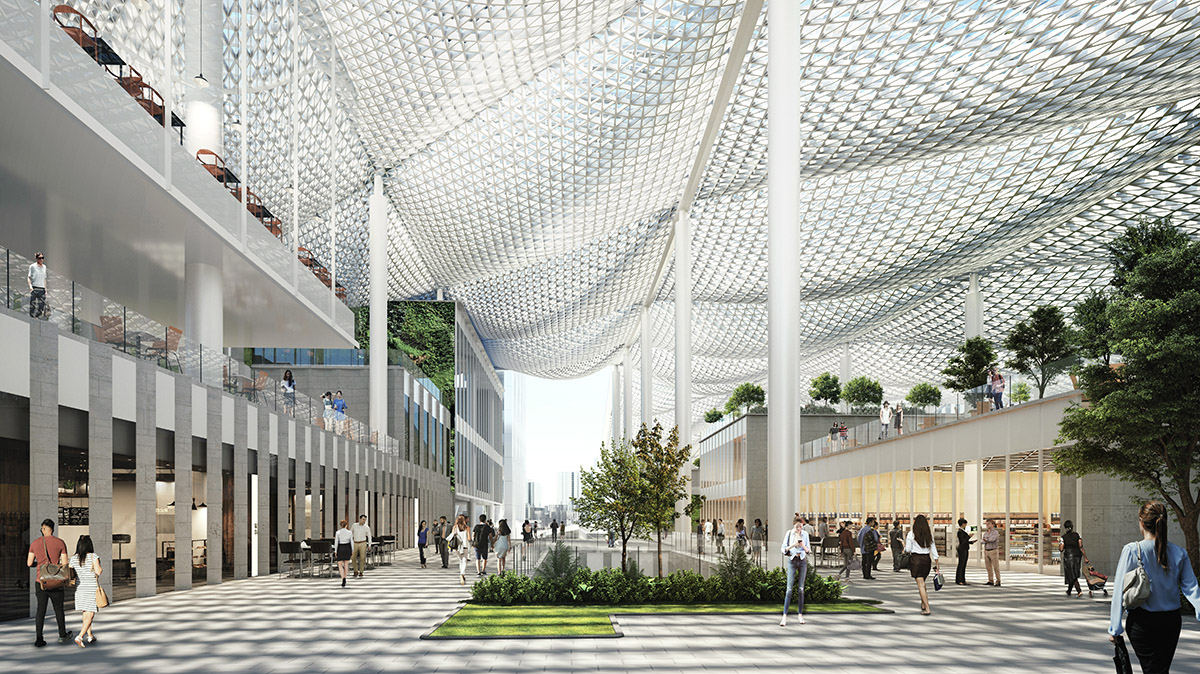 "Recently connected to international finance and tourism centers Hong Kong and Macau via the longest sea-crossing bridge in the world, Zhuhai has emerged as an eco-conscious city in the coastal region known as the Greater Bay Area," said SOM in a press statement.

"Named the most livable city in China by the Chinese Academy of Social Sciences, Zhuhai plays a pivotal role in the region’s growing tech hub, which might soon rival Silicon Valley." 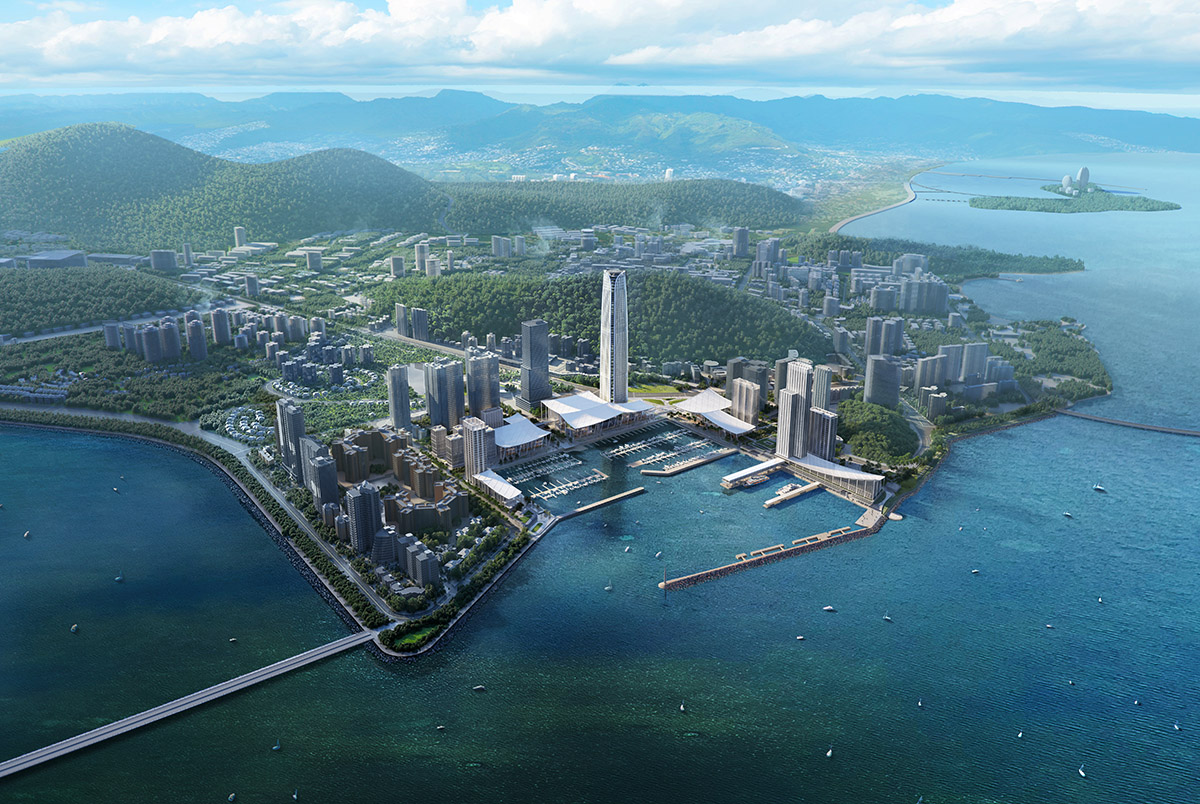 SOM highlights that the design "sets a new standard for public transit in the region, with plans for a robust transportation hub that offers connections to land, sea, and rail across more than 40 acres."

The complex also features five modular canopies that envelop three sides of a 1.8 million-square-foot port, weaving together a landscape of towers rising behind it and creating a series of covered pedestrian alleyways, a lively retail environment, and interlinked courtyards along the waterfront promenade.

"The forms of the canopies are inspired by the local legend of the Fisher Girl and reflect the fishing nets commonly seen on the coastline throughout the region," said SOM Design Director Sean Ragasa.

"We wanted our design to resonate with the culture and history of Zhuhai, and to evoke a story that’s familiar to everyone who lives there." 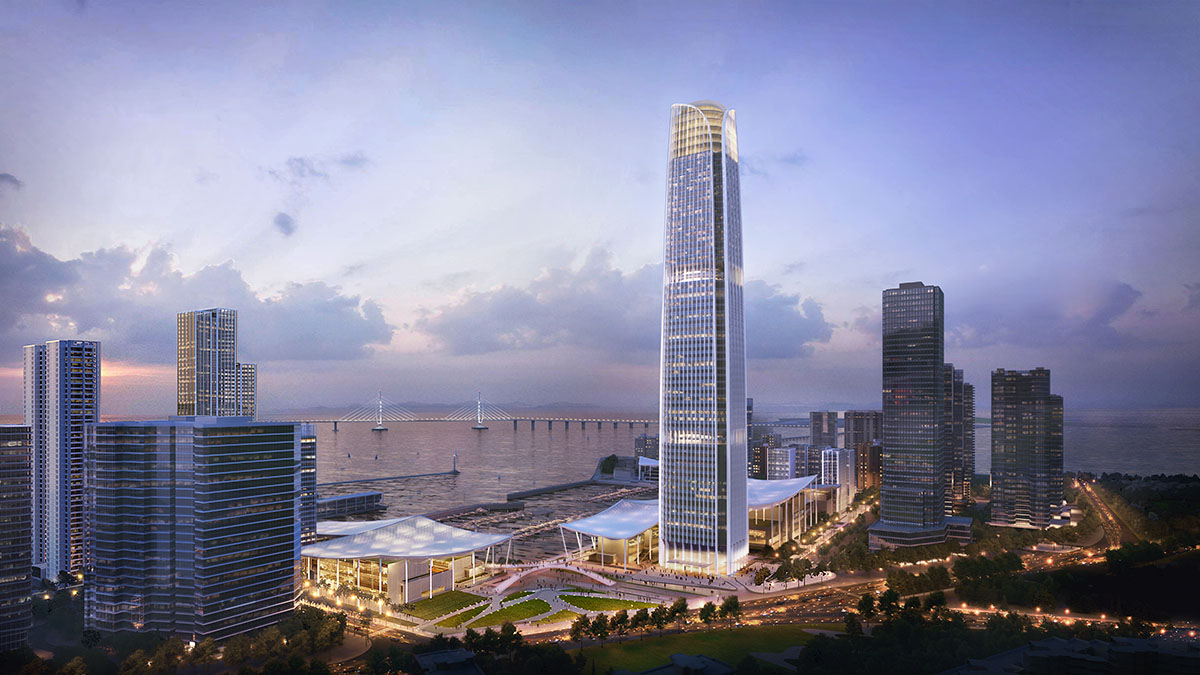 Complementing the site’s maritime heritage is a 1,045-foot-tall (318,5-metre) tower that rises at the heart of the neighborhood, creating a recognizable structure with a design inspired by the form of a lighthouse Fresnel lens.

The tower comprises 35 floors of office space topped by a 20-story Ritz-Carlton Hotel complete with a skybar and observation deck. The tower is diagonally bisected by an axis that appears to peel open the facade, revealing a vertical atrium that offers visitors breathtaking views of the bay. 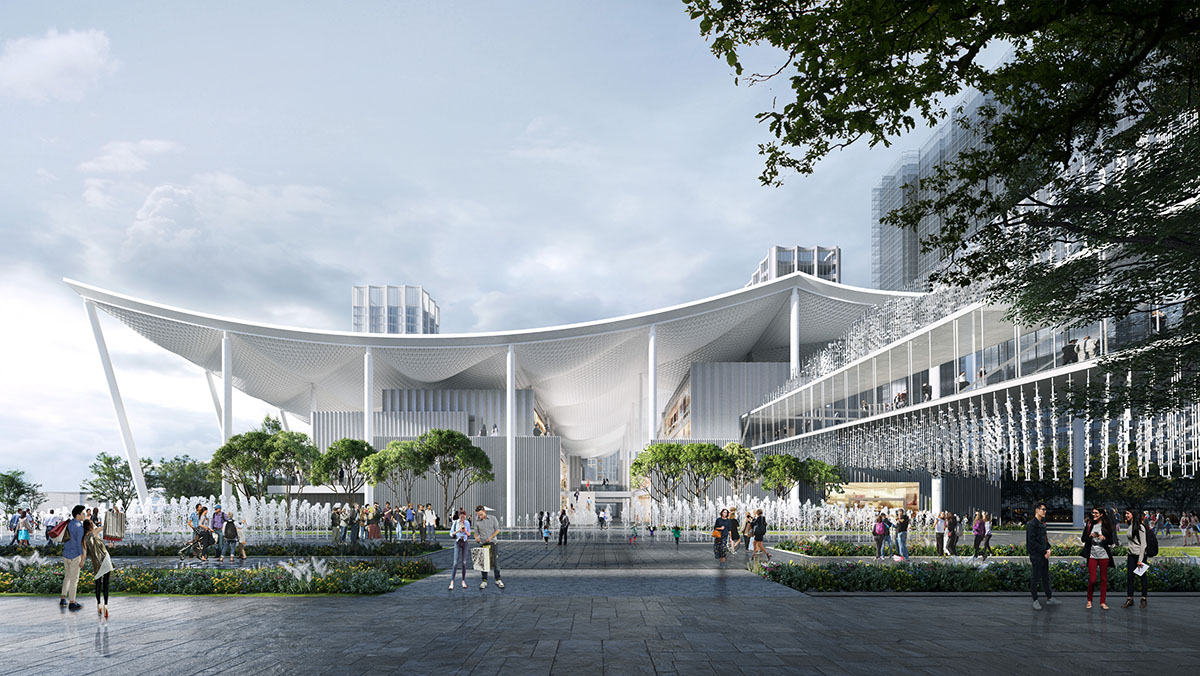 The new neighborhood is designed to utilize Zhuhai’s most abundant natural resources—the sea and sun—to reduce natural gas consumption, conserve water, and create a comfortable environment for residents, office workers, shoppers, and nightlife seekers, helping to activate the site both day and night. 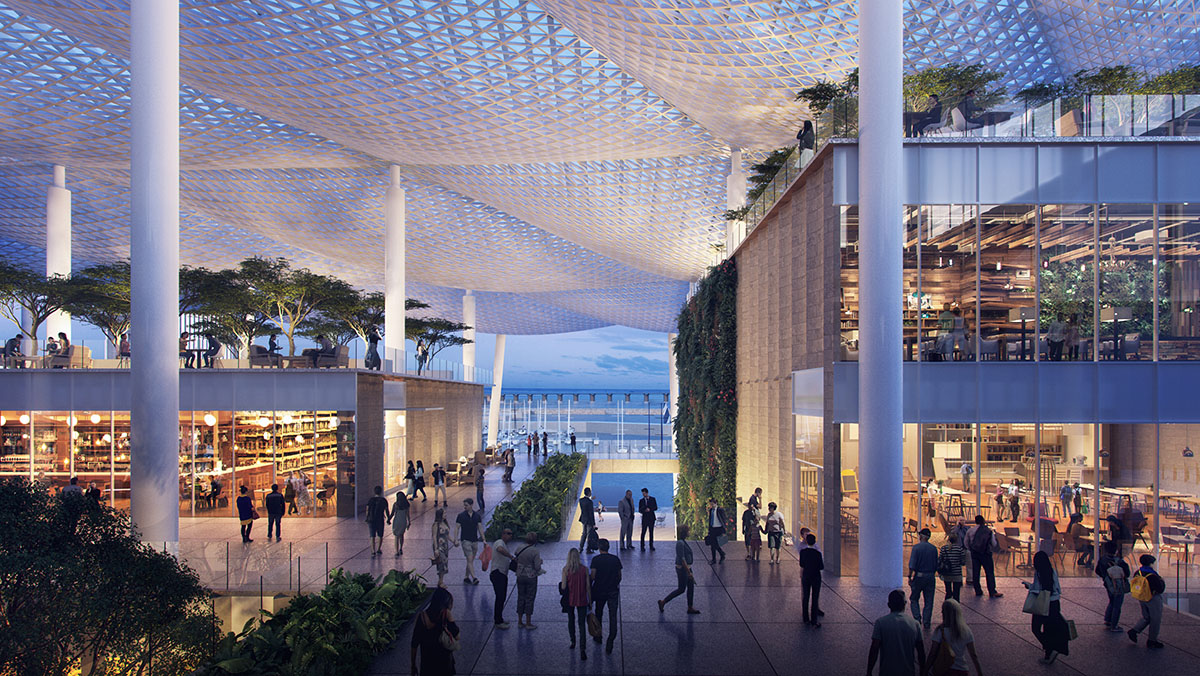 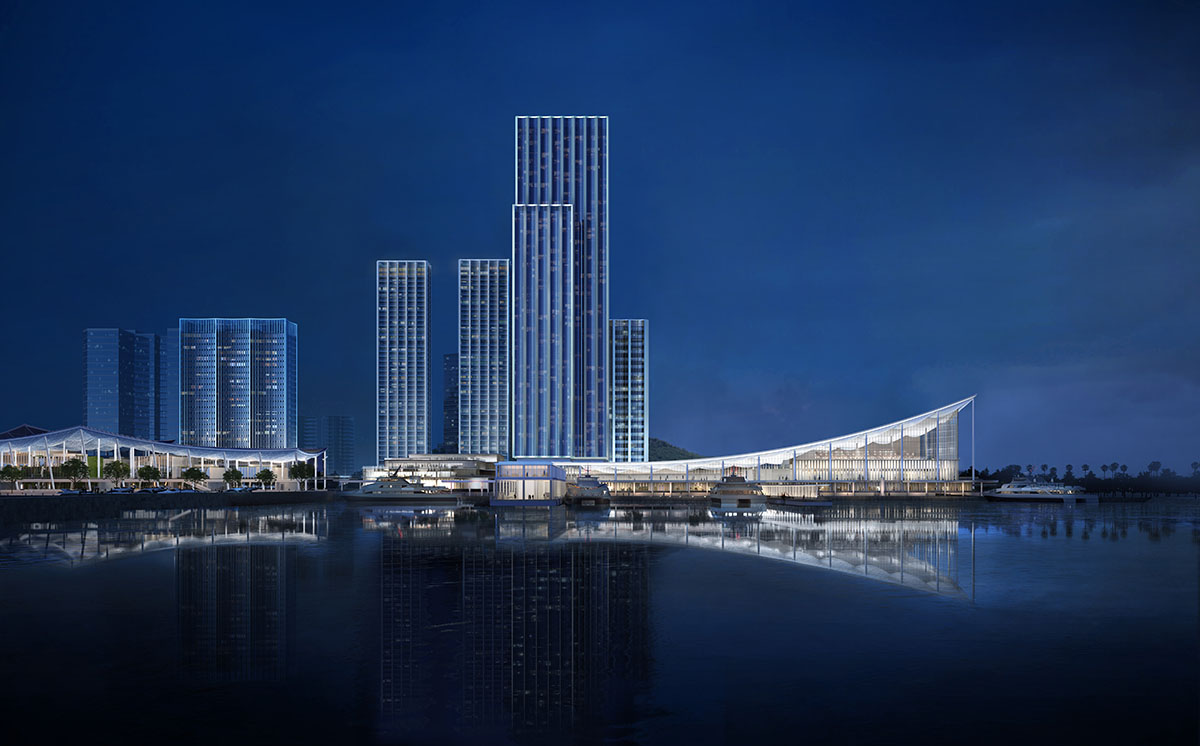