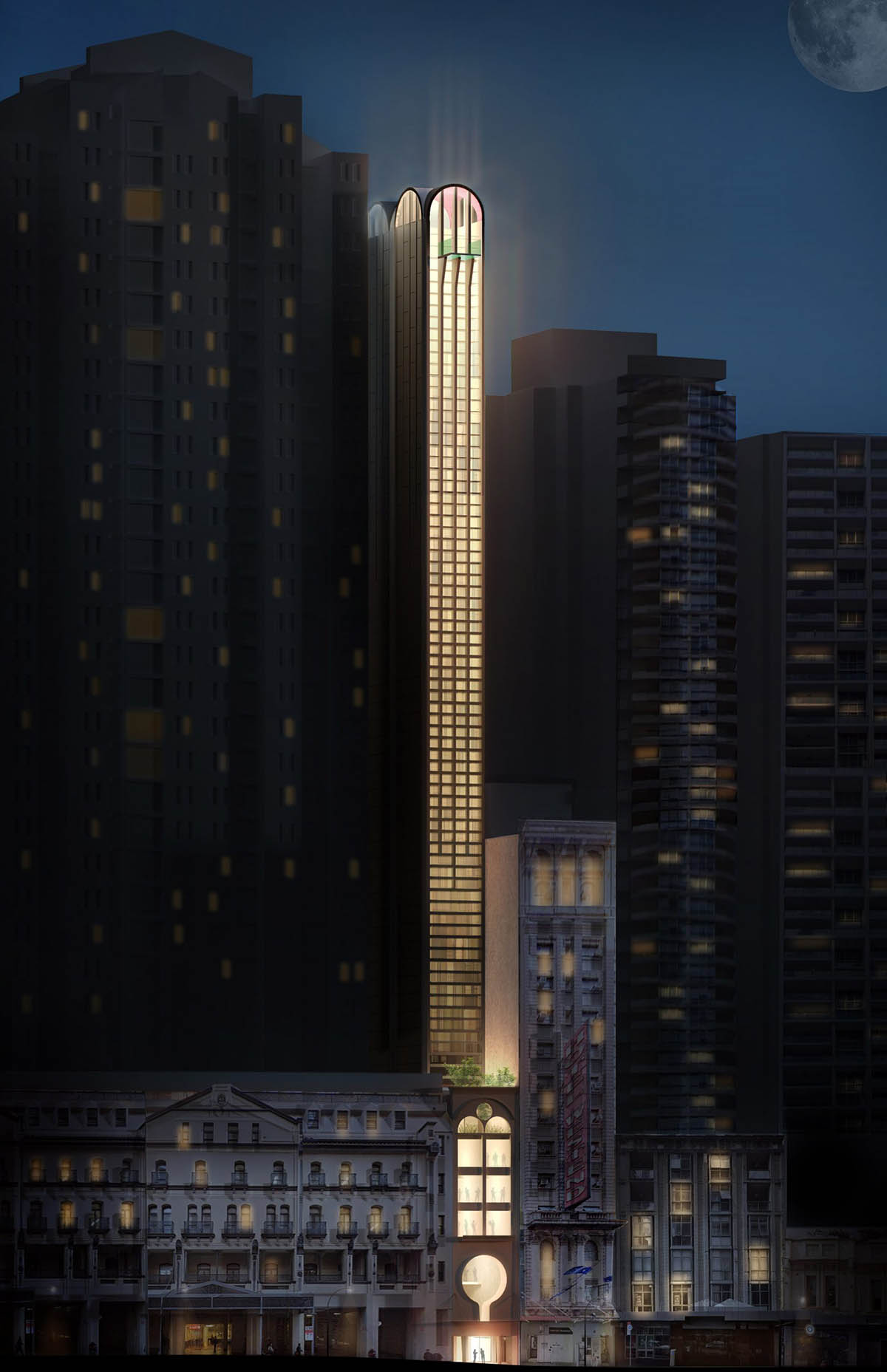 Called 410 Pitt Street, the super narrow skyscraper is envisaged as a 6-metre-wide and 100-metre-tall building at site. The skyscraper has been proposed as a hotel set to be built at 410 Pitt Street of Sydney, Australia.

As the studio explains, the design scheme has been developed by "testing the boundaries of construction and design" and described as a "pencil" tower by the team.

The new skyscraper adds both "a generous street room and a heroic skyline to its neighbourhood", according to the architects. 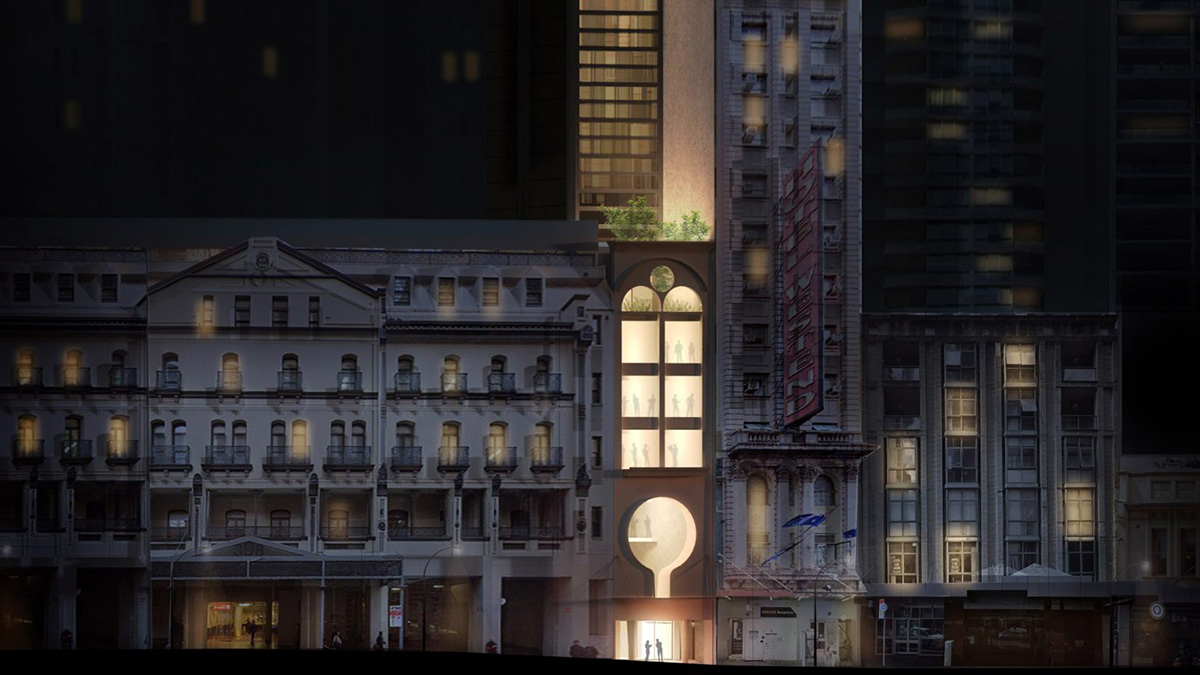 "Our proposal embraces this extraordinary attenuated quality, proposing a ‘column’ tower on a low scale podium," said the architects in their website.

"The podium references the delicacy and detail of its heritage neighbours, using the language of grand arching brickwork."

At night, the skyscraper shows itself as a shining star and its skinny character is fully revealed. 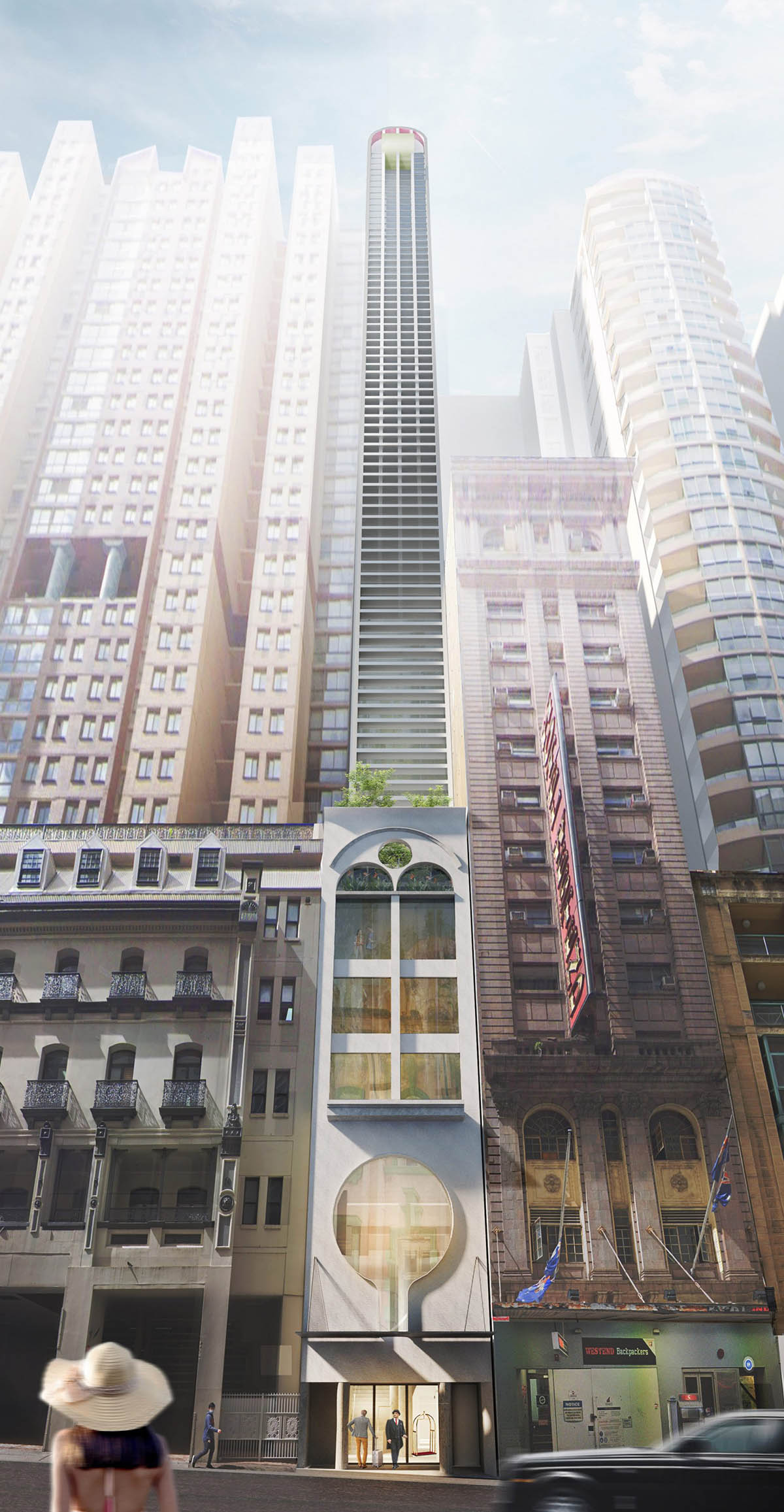 The skyscraper will feature a three-story urban room that will house multiple levels of lobby, cafe and lounge and that part will be visible through a large scale keyhole window. It will also include a walled courtyard garden for shared use overlooks the street.

"The tower simulates the compression and extension of a column, through a continuous abstraction of the elements of a column: base, shaft and capital," added the studio.

In the tower, each floor will contain compact hotel rooms, gathering light from the street, rear court or internal shapely voids.

As the team highlights, the voids will be tiled to "reflect light and colour into the rooms". "Key hole windows provide a framed vignette of the seamless tiled surface," they added. 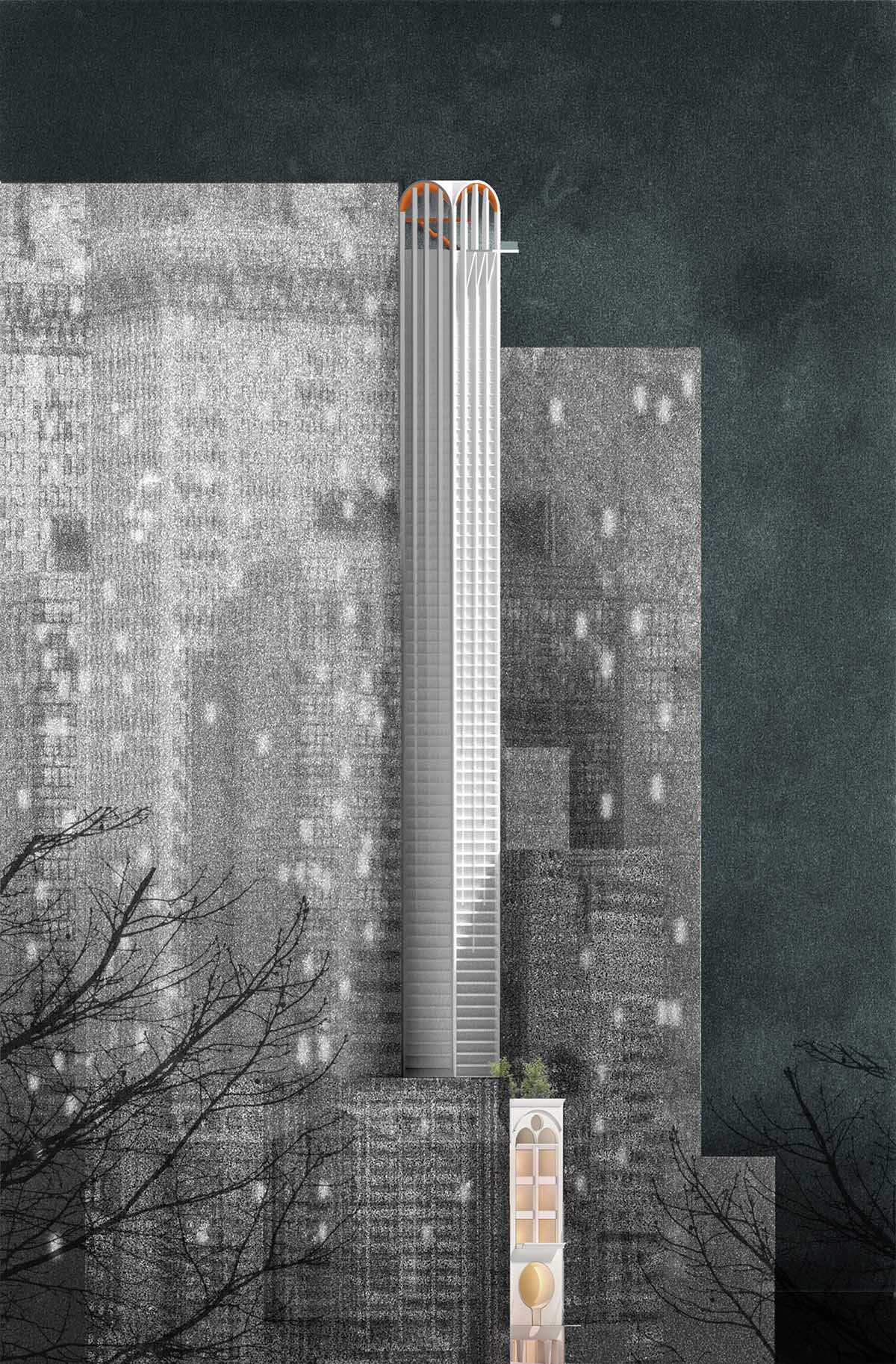 The facade system is comprised of compressed horizontal screenings, slowly transforming into exaggerated verticals at the top.

"The capital is joyfully expressed as a flying balcony and shell curves of a rooftop sundeck, pool and “hammam” spa. The soffit of the curved ceiling  is brightly tiled, visible from both the street below and the city beyond." 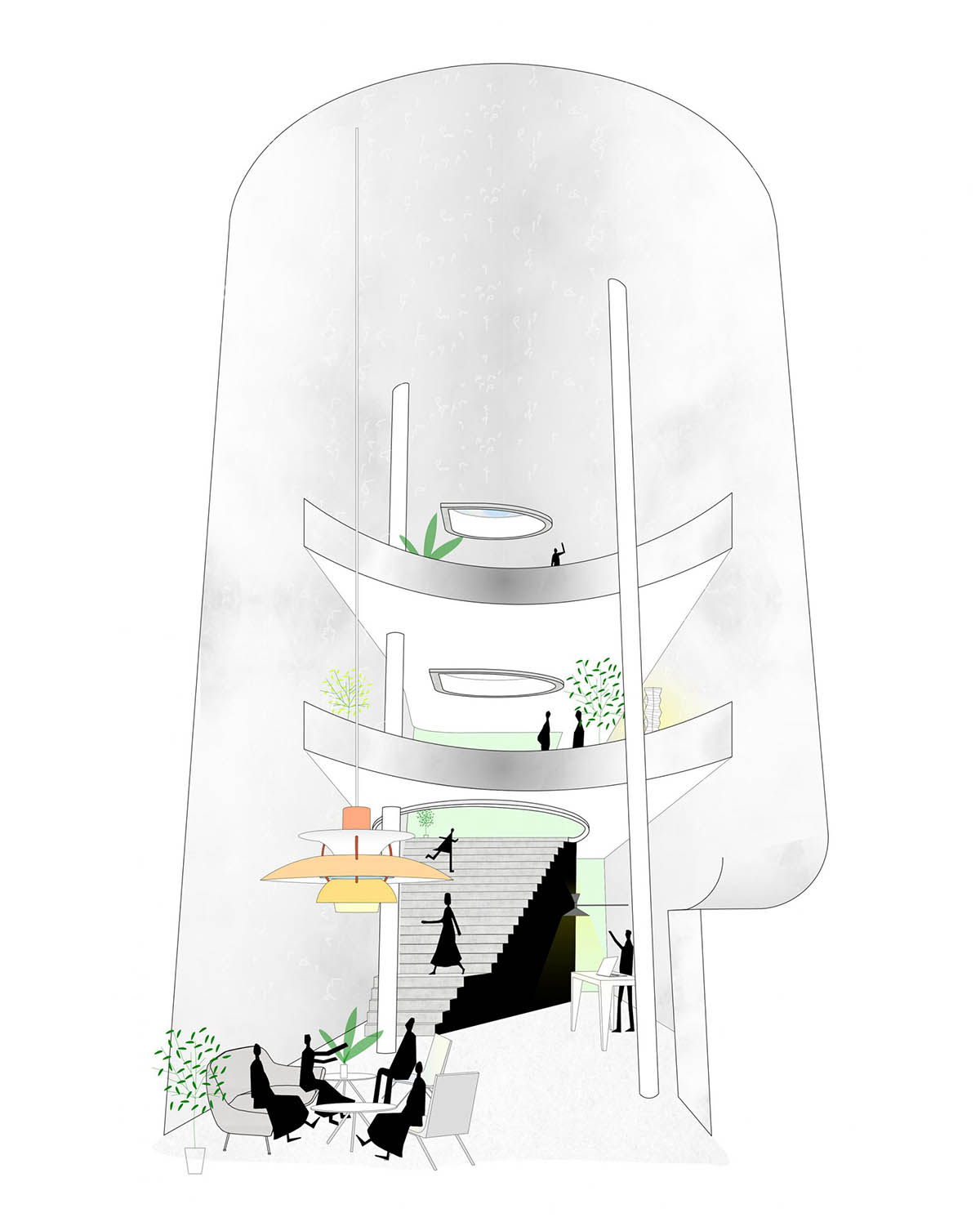 An abstract view from the interior of the lobby of skyscraper 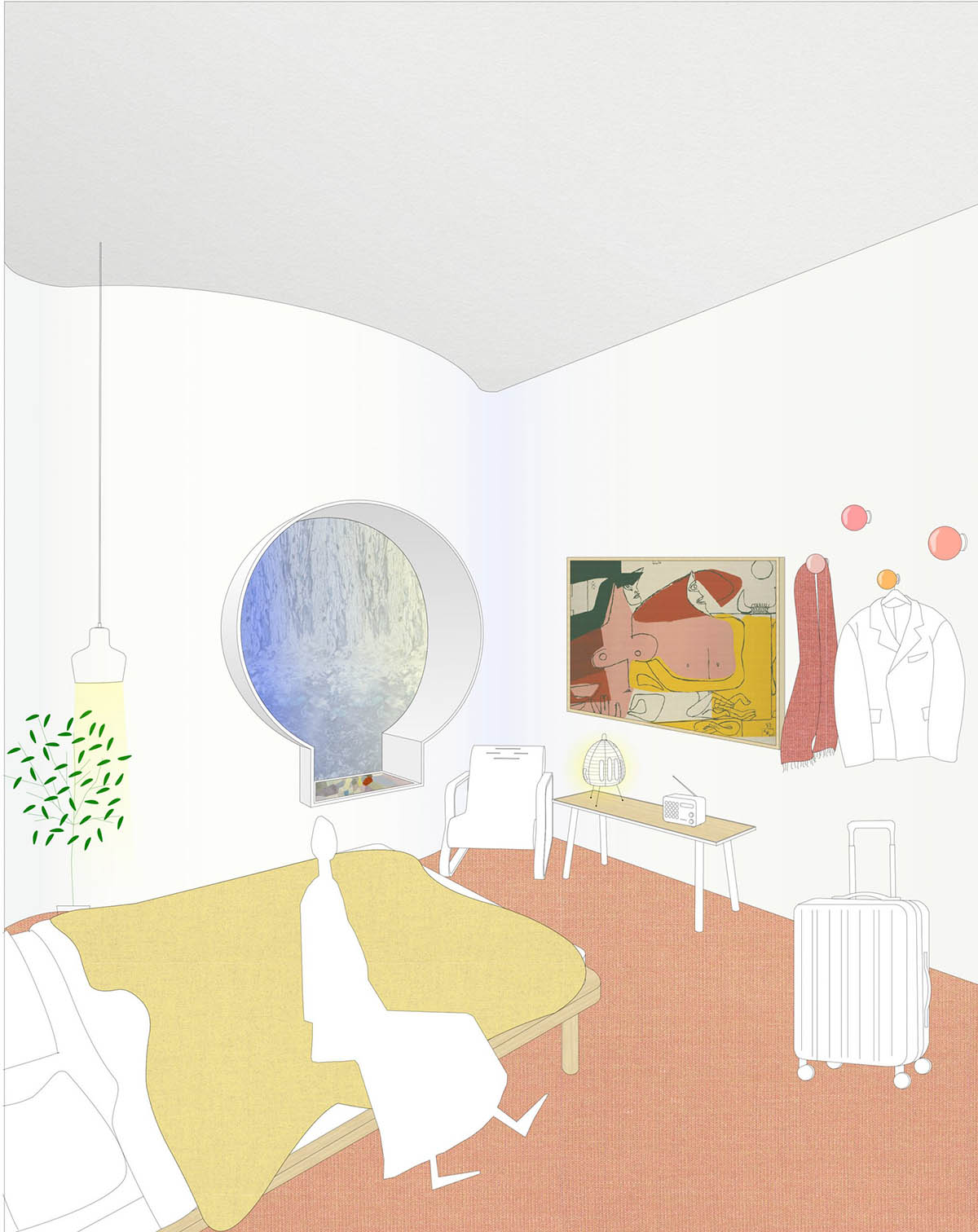 An example drawing of a hotel room