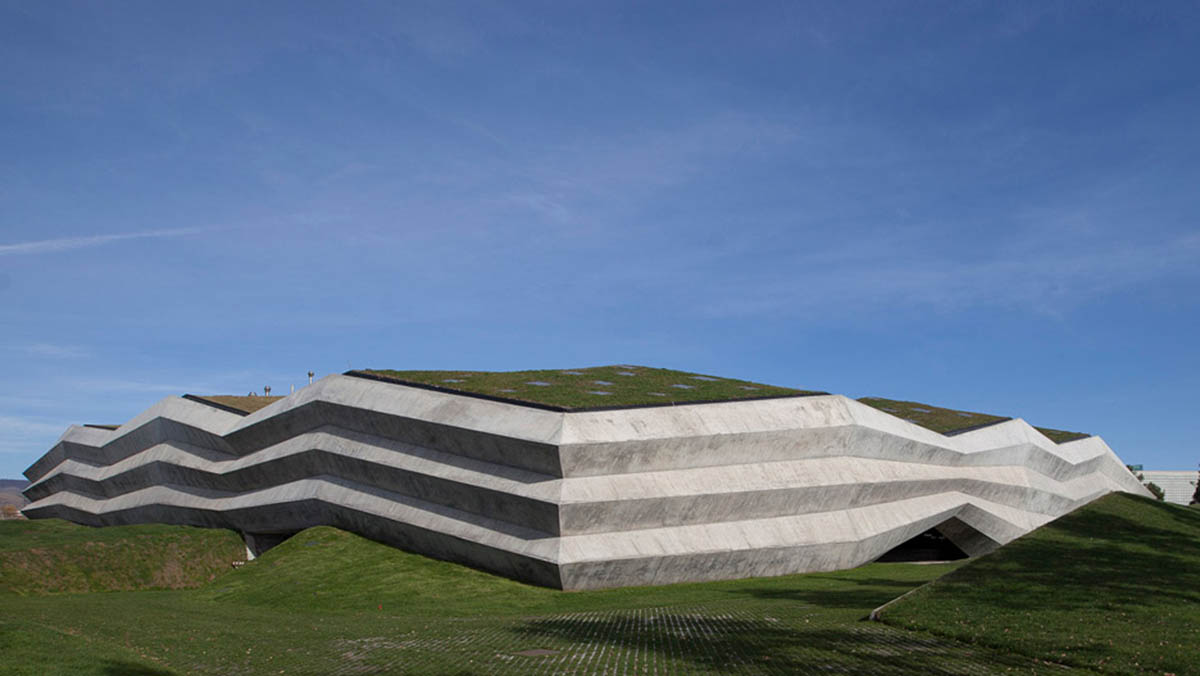 Named Coffee Production Plant, through the new factory, the architects wanted to avoid of traditional factory appearances and created something being built around the program itself.

Covering a total of 9,300-square-metre area, the new building is situated on a highway connecting city to the airport, the site is surrounded with fields and pine trees. 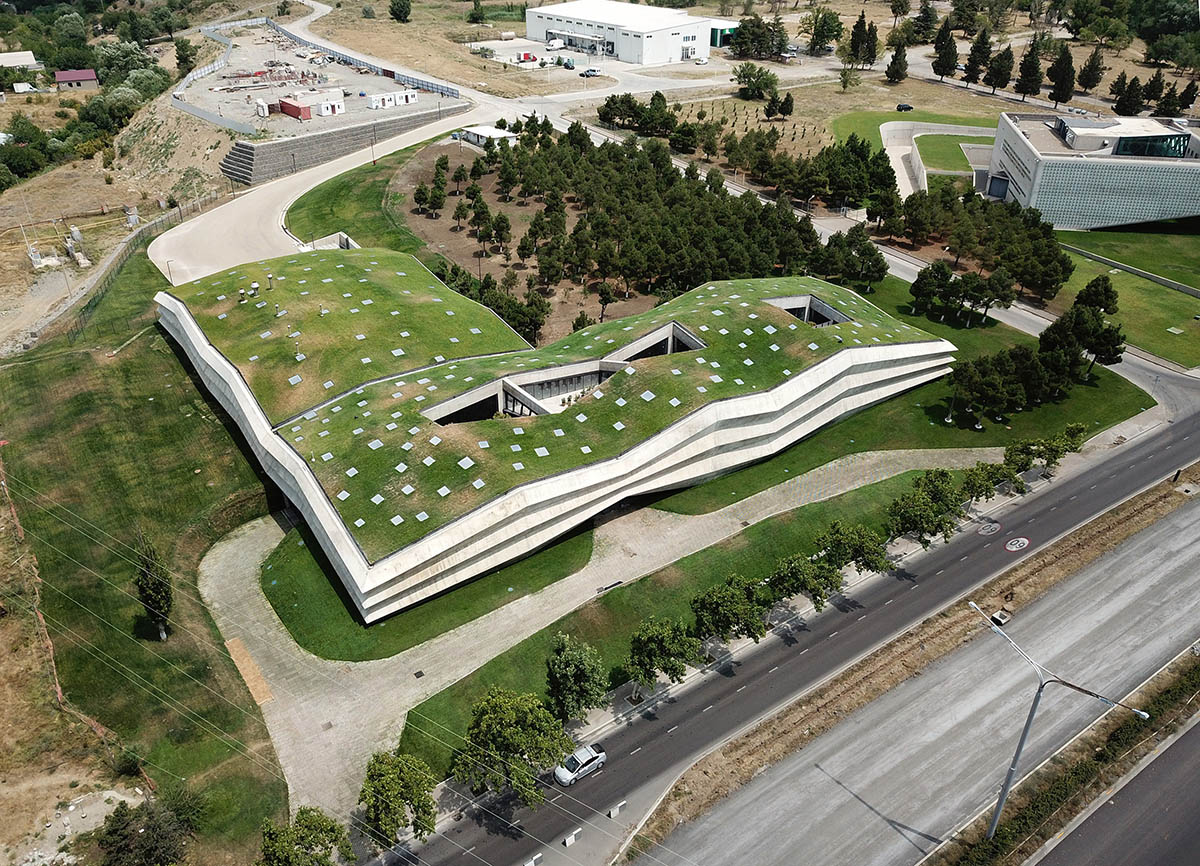 Although there are no window openings on its outer façade, the L-shaped building consists of large skylights and large windows overlooking the internal courtyard.

The roof of the building is covered by vast green where occasional openings in forms of atriums, terraces and skylights bring natural light indoors.

"This reduces an impact of a large building footprint visible from the planes taking off and landing next to the site," said the architects. 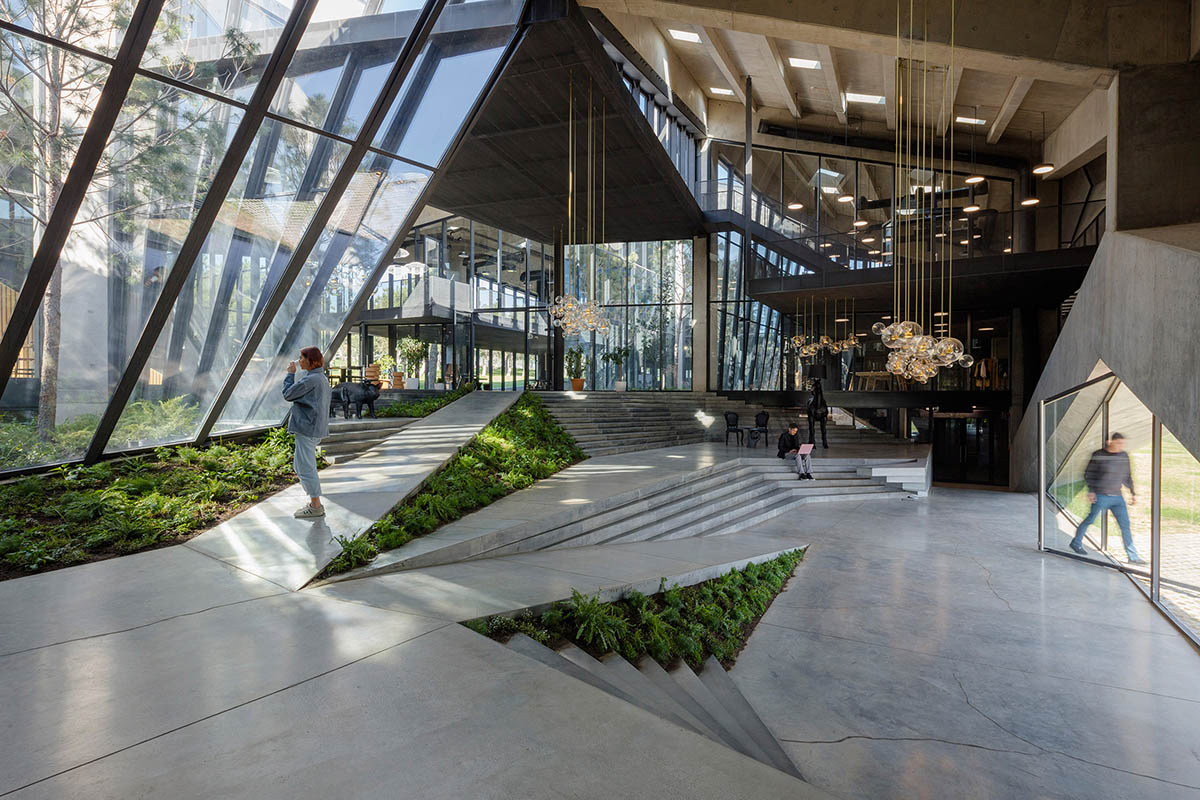 In the interiors, the studio arranged all programs in a continuous unobstructed space, with glass partitions as boundaries in between.

"From the highway, the building is a homogeneous concrete folded volume with no visible openings that would define its programs, on the back side it opens up towards the pine forest," added Giorgi Khmaladze Architects.

"From above, it blends into surroundings by vast green roof, where occasional openings in forms of atriums, terraces and skylights bring natural light indoors."

The interiors also contain amphitheater-like stairs that welcome its visitors with green-infilled areas. The studio created a continues, small-scaled landscape throughout the building. 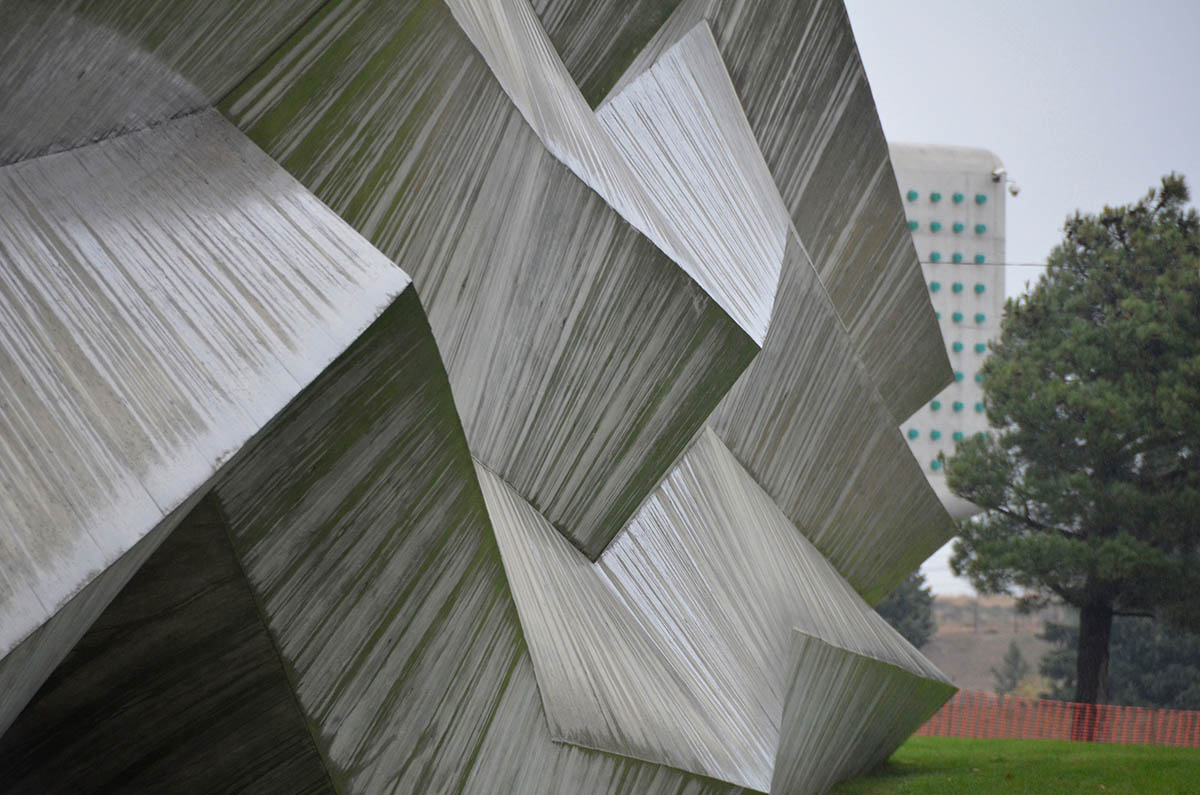 The architects used the concrete structure with one way waffle slab spanning up to 16 meters to create large unobstructed spaces. Steel floor slabs are suspended from the roof slab on various levels with use of steel rods.

The architects poured the concrete at site to get folded façade aging well, which was poured as a double wall with insulating layer in-between.

"Given the prominent location, the city required a building that would escape the regular factory appearance, and the client's intention was to create a strong visual identity for the newly created coffee brand," continued Giorgi Khmaladze Architects.

"The program required spaces that would fit both, coffee production plant with its facilities and office space which would provide variety of work space arrangements, meetings and socializing areas, both indoors and outdoors." 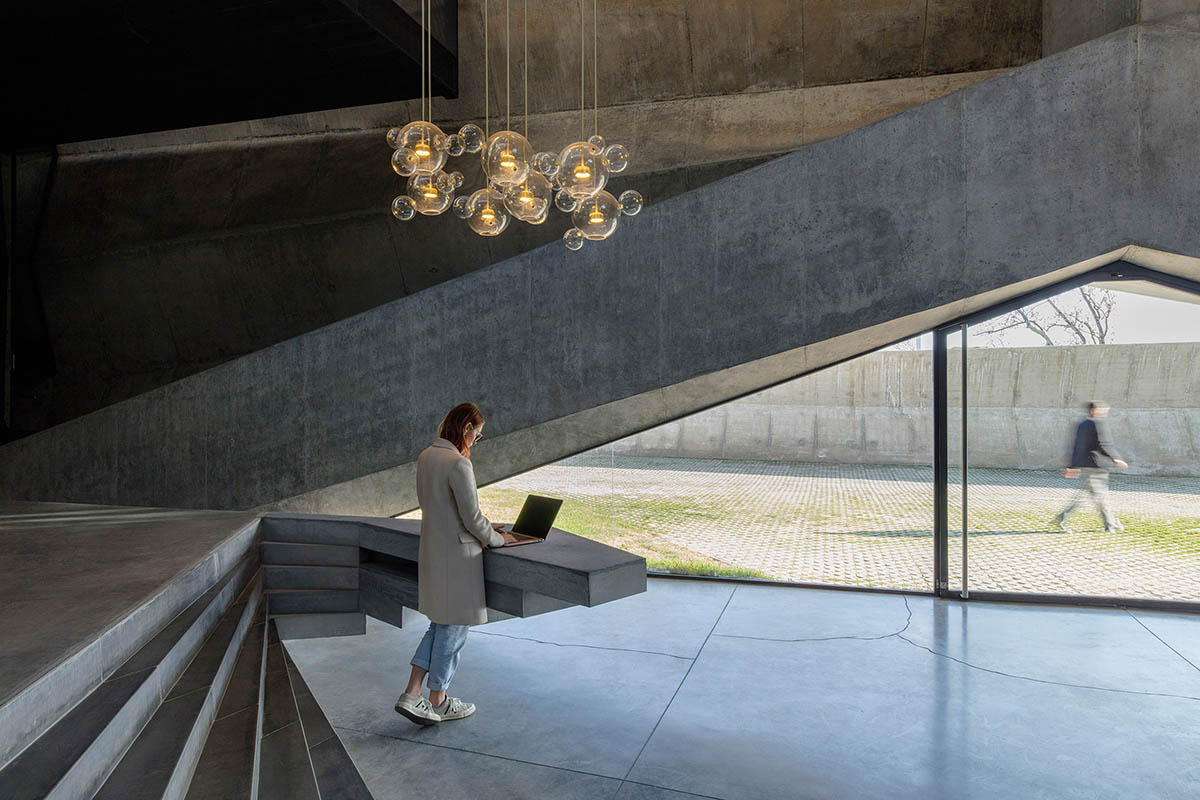 The building stays high where necessary to fit production equipment and lowers where possible. Same is with office, where the building shell wraps around work, meeting and rest spaces arranged on floors suspended on various levels.

The three atriums as the light wells, and numerous skylights bring natural illumination to the work and shared spaces below. Each of the open air atriums is filled with plants to form small green outdoor spaces directly visible from all indoor areas. 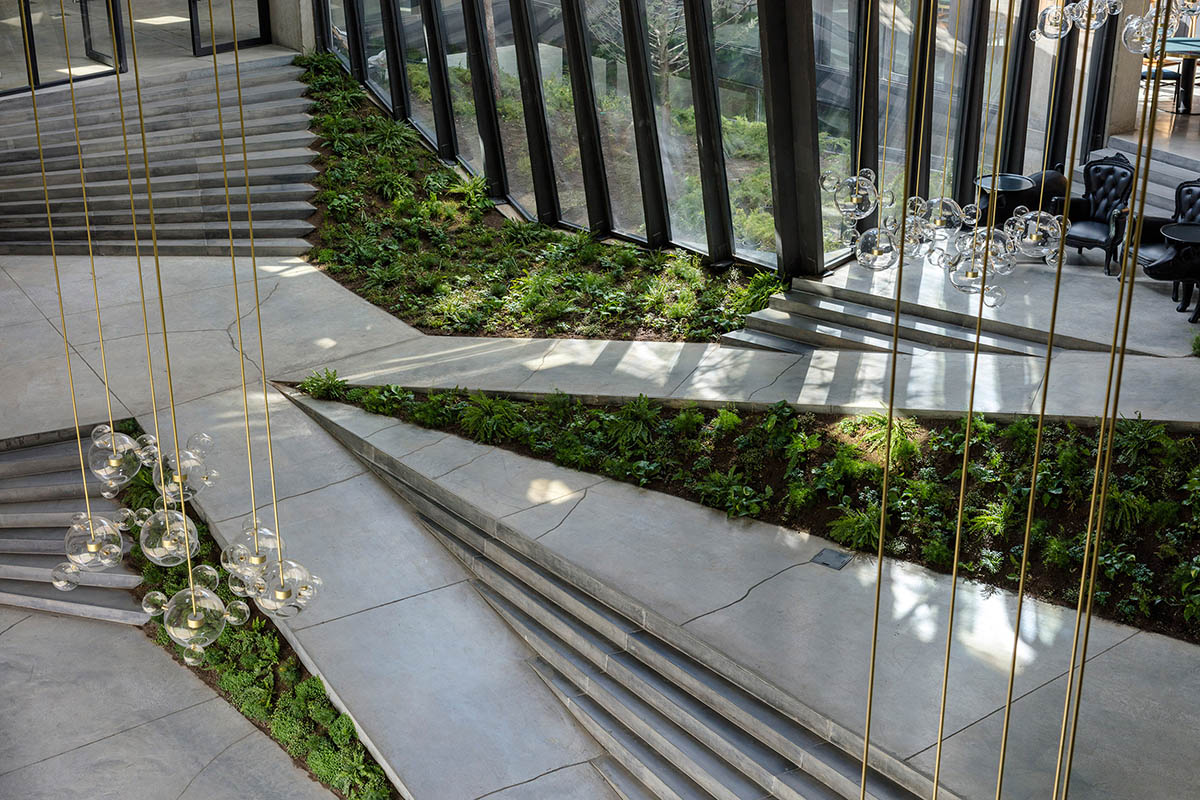 From the highway, the monolithic mass with no visible openings adapted to the slope of the site is an object of curiosity. While it's internal spaces are all oriented and opened towards the green park located on the back side and the sky by means of two terraces which are part of the green roof. 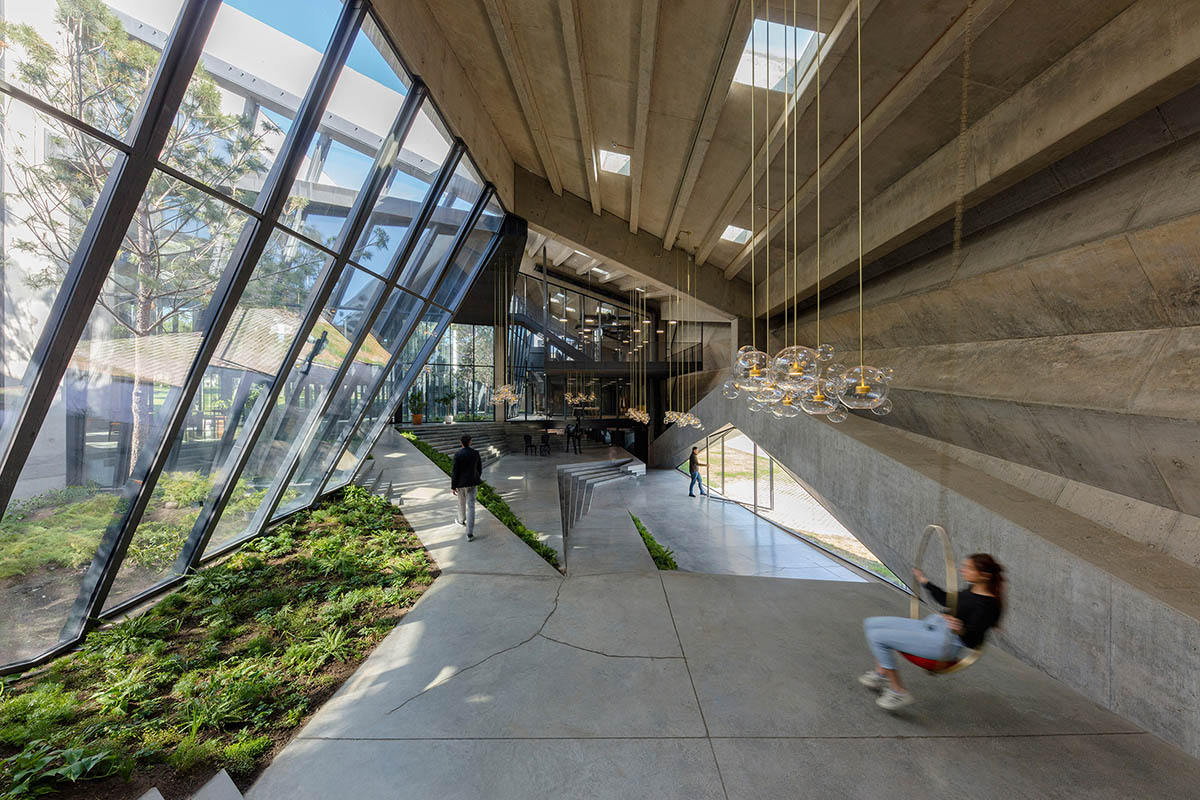 The all-concrete facade folds to produce double curved geometry. Its appearance changes during course of a day, following sun movement producing an interplay of light and shadows. 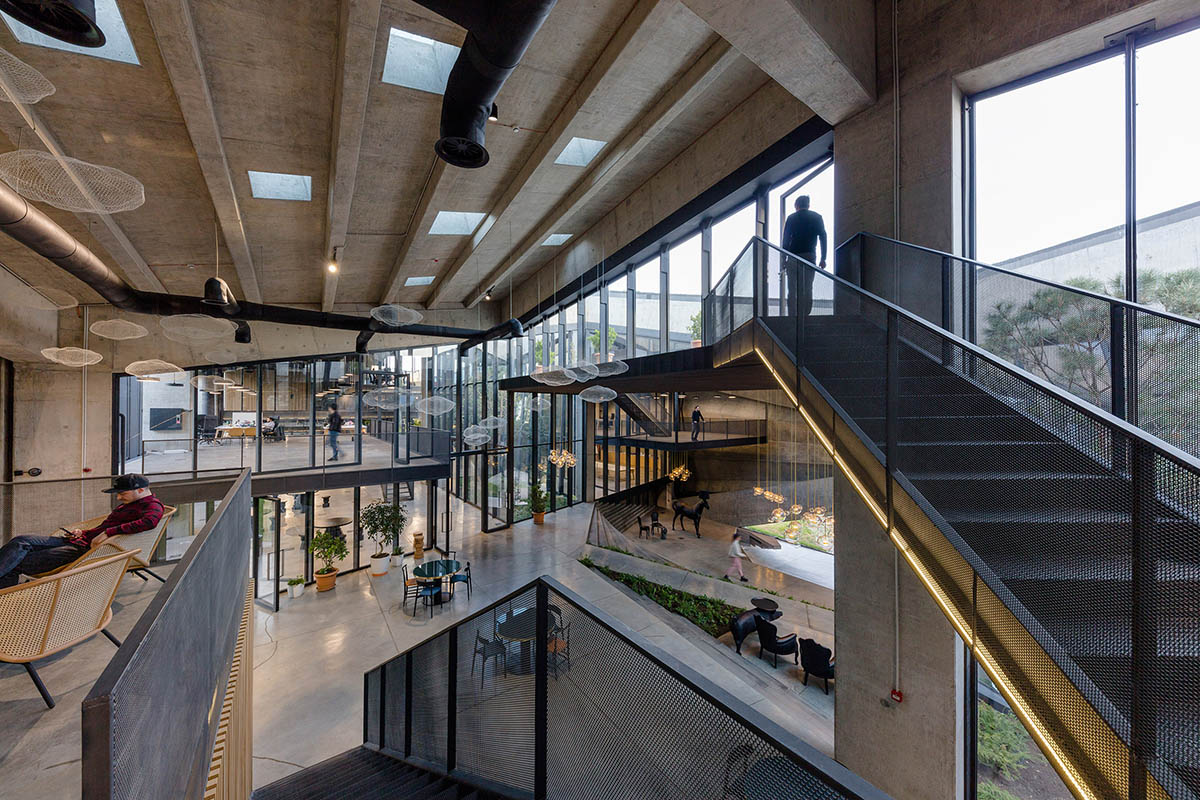 Central entrance is formed by a narrow gap produced by lifted concrete shell leading into a large main lobby located between the two of the green atriums.

The multilevel platforms for coffee exhibits and lounges are greeting visitors along the stairs and ramps leading to the coffee tasting cafe and the office spaces.

Underground level of the building is mainly used for indoor parking and various storage and facilities. The 3,680-square-meter green roof acts as an additional thermal barrier to the roof insulation.

The roof is intended to grow vegetation found around the site with wild grasses and plants, to blend with the context and require less maintenance. 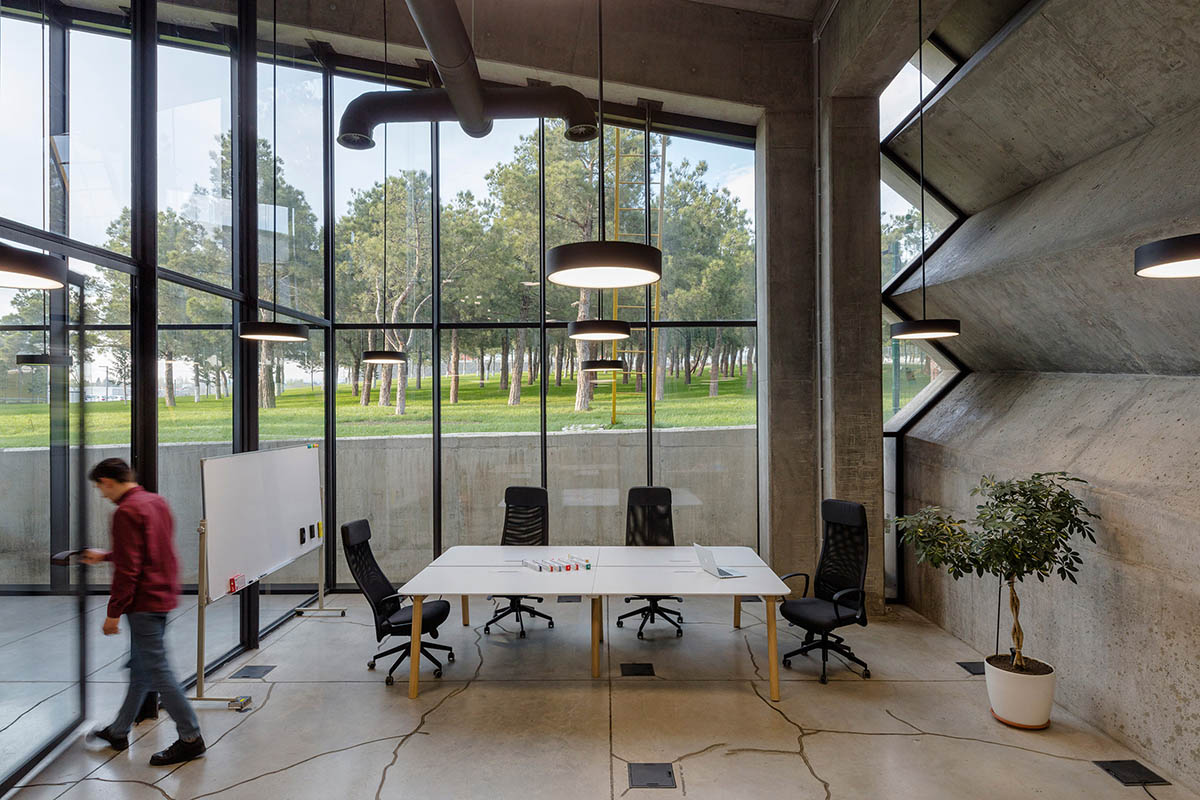 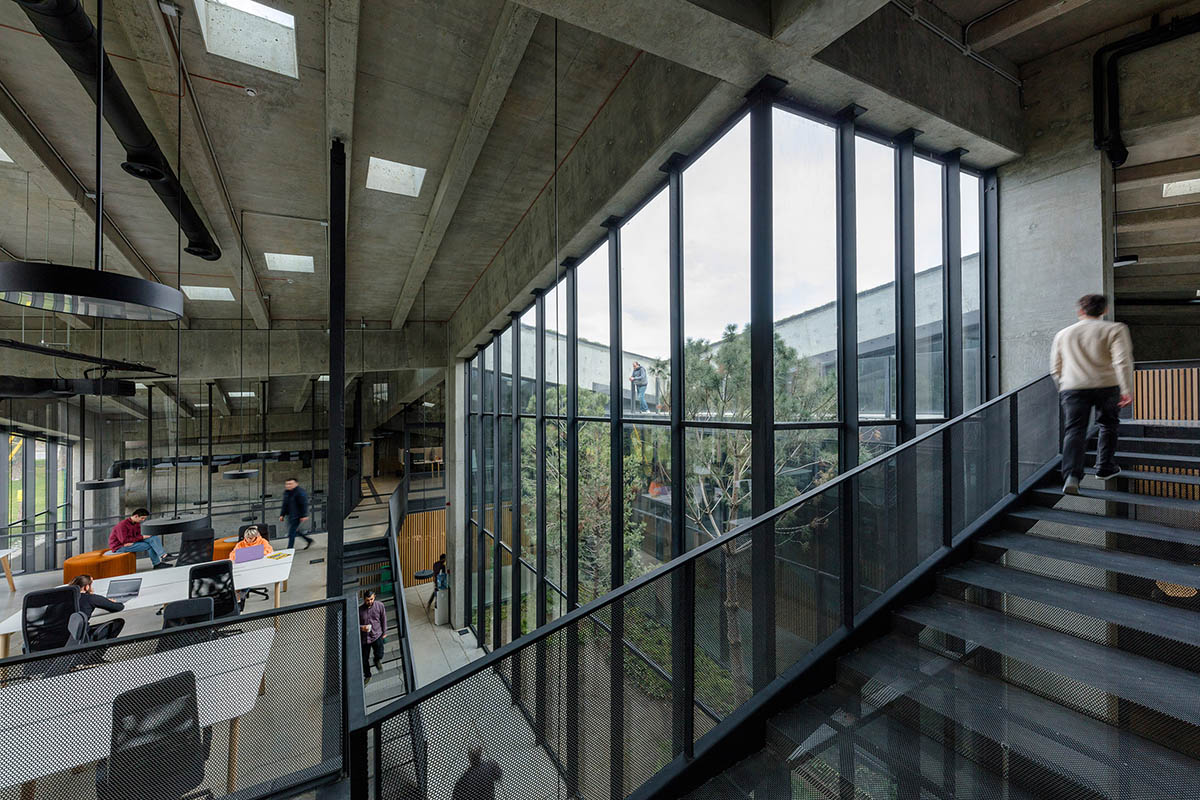 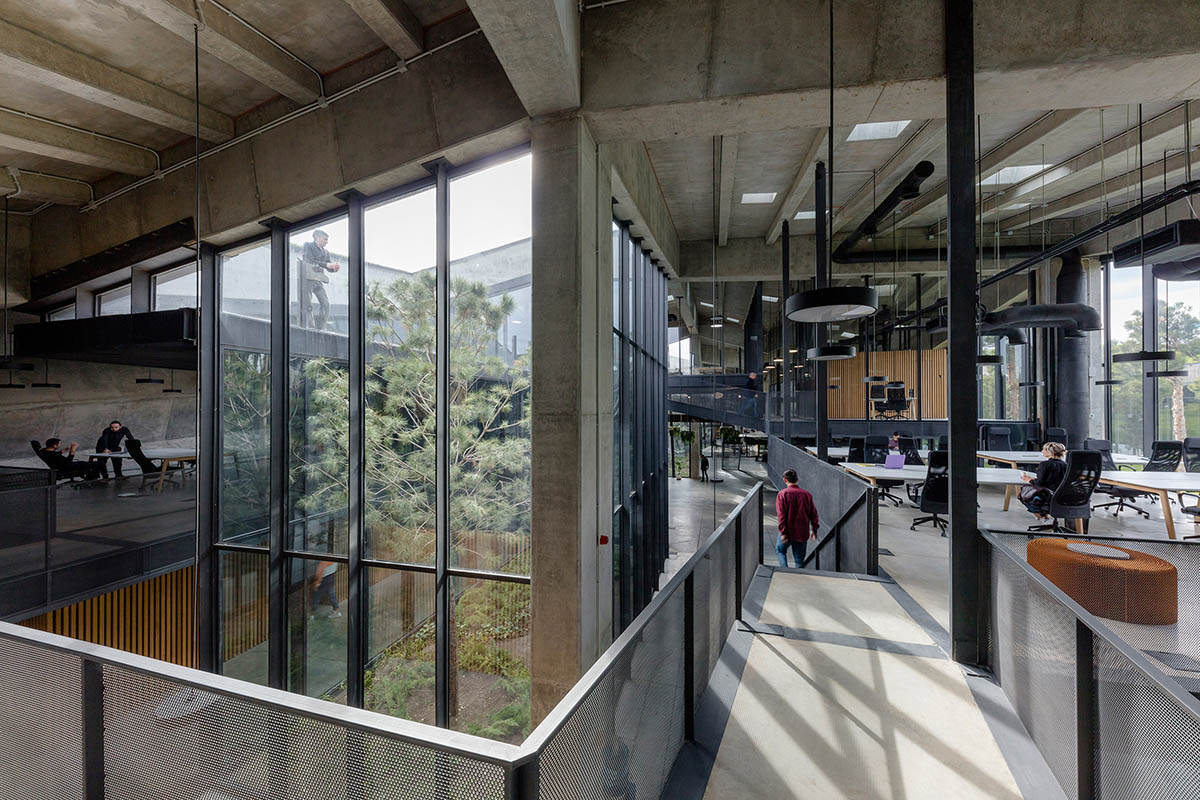 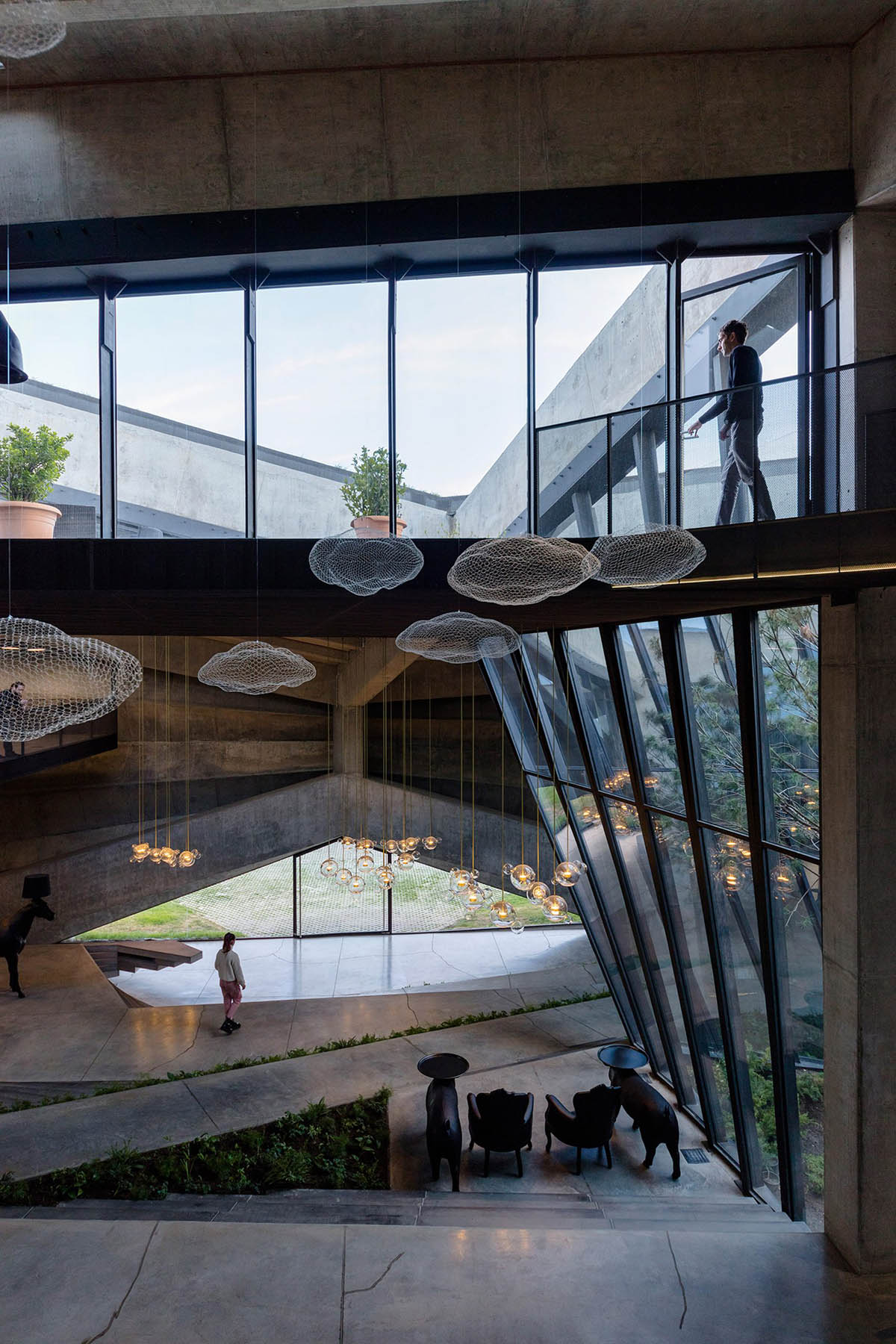 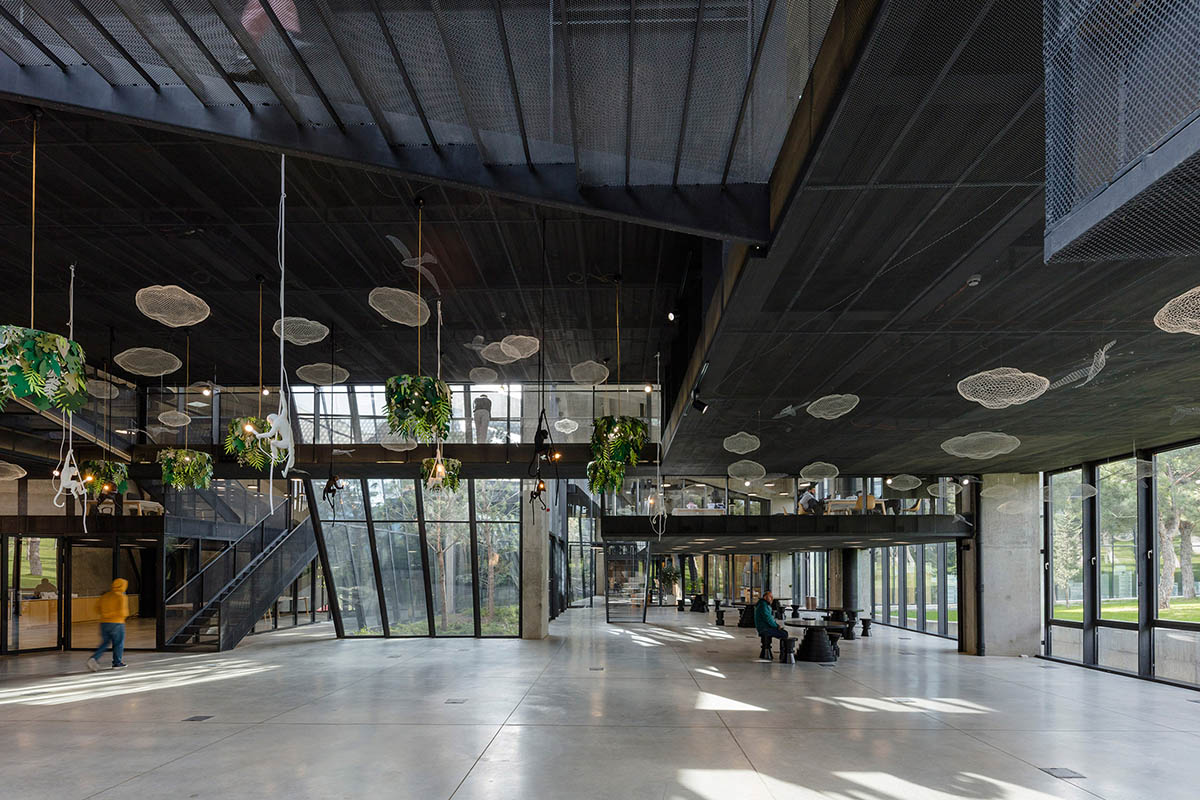 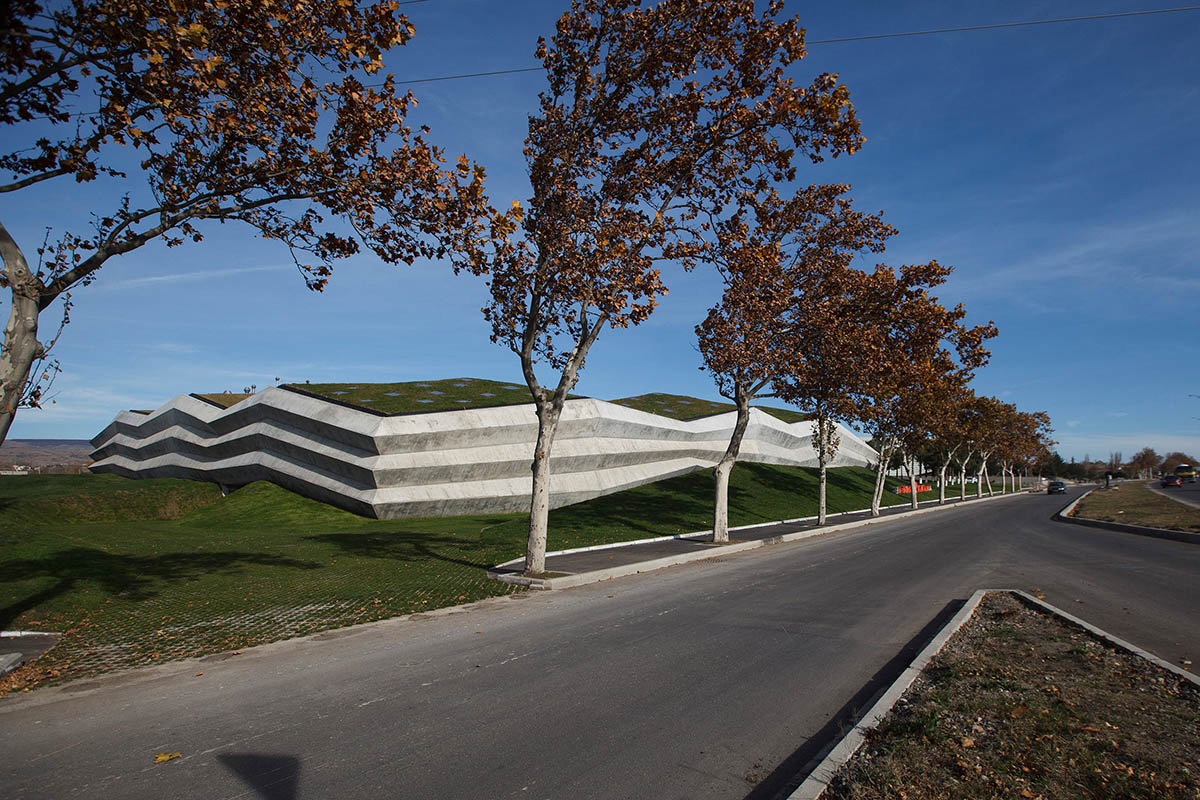 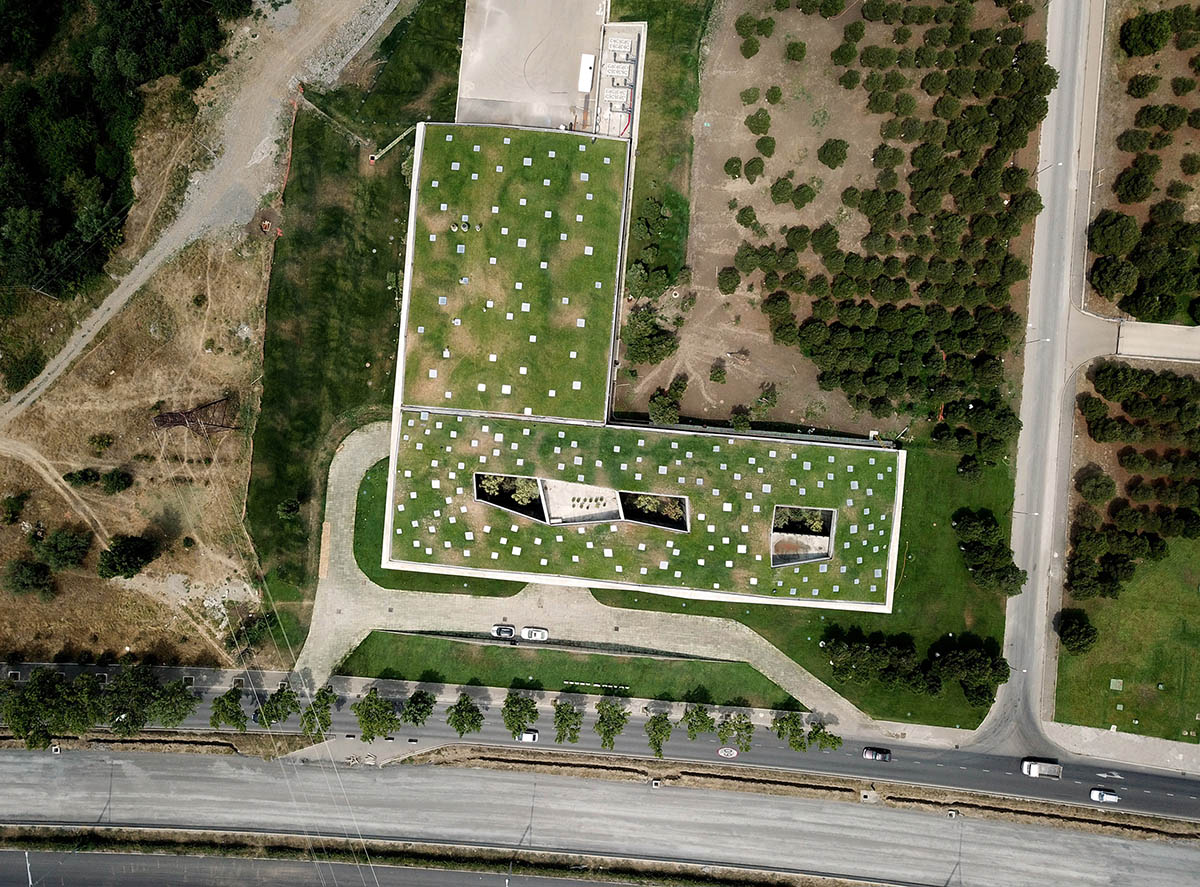 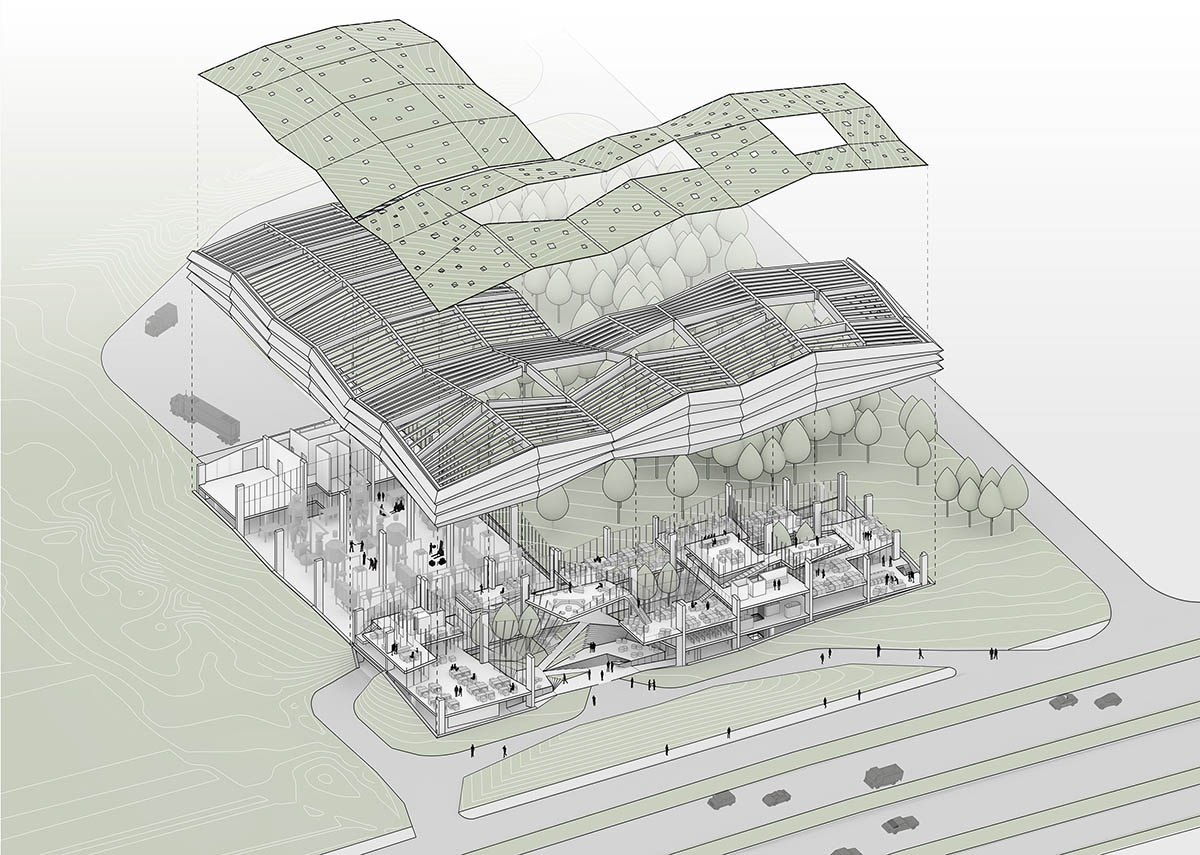