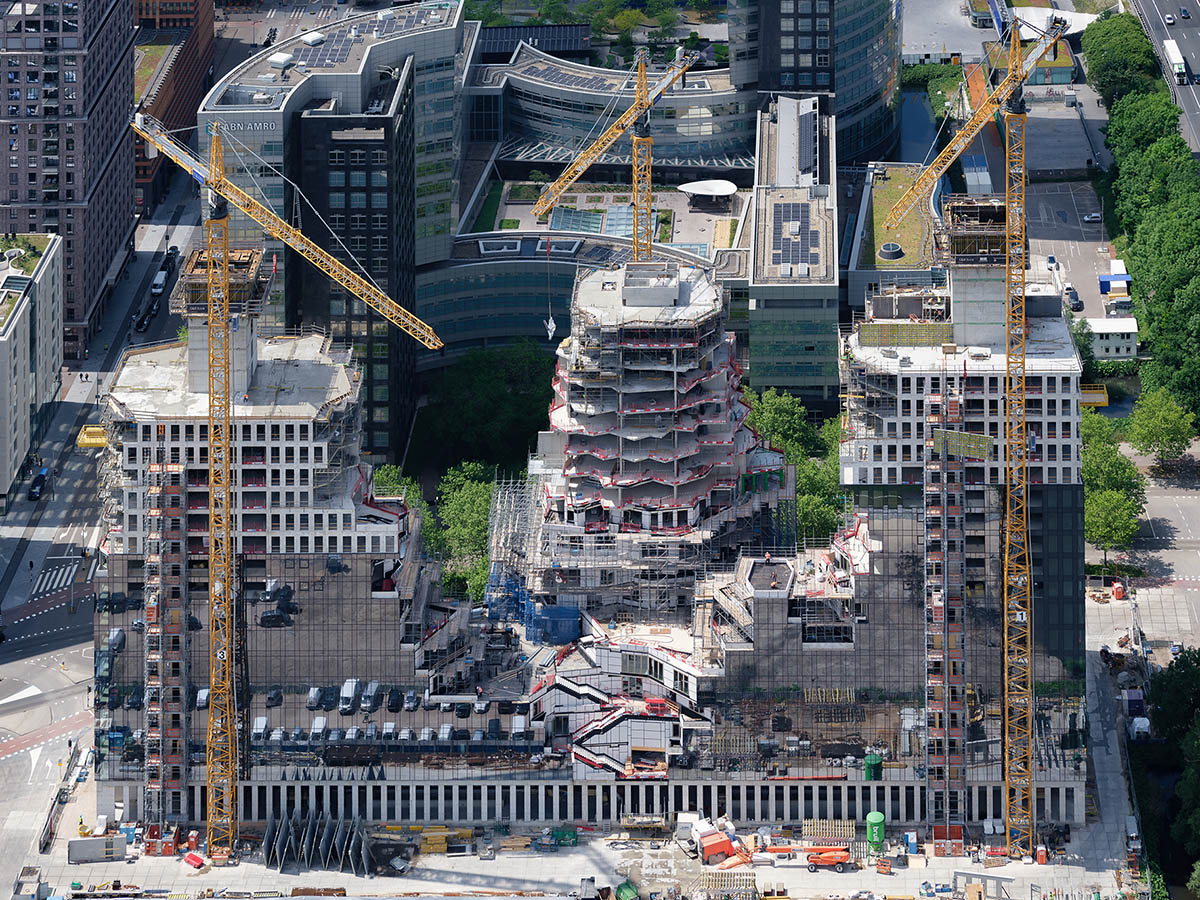 MVRDV has revealed the latest photographs from the construction of Valley, a mixed-use project containing apartments, shops, offices, cultural institutes, and a creative centre, has reached its highest point of 103 meters in Amsterdam’s Zuidas district.

Started construction in 2017, the 75,000-square-metre project is designed for EDGE Technologies, the project will bring much-needed greening to Amsterdam’s Zuidas business district thanks to its landscape of jagged stone terraces, bay-windows, and balconies, with dense planting designed by landscape architect Piet Oudolf. 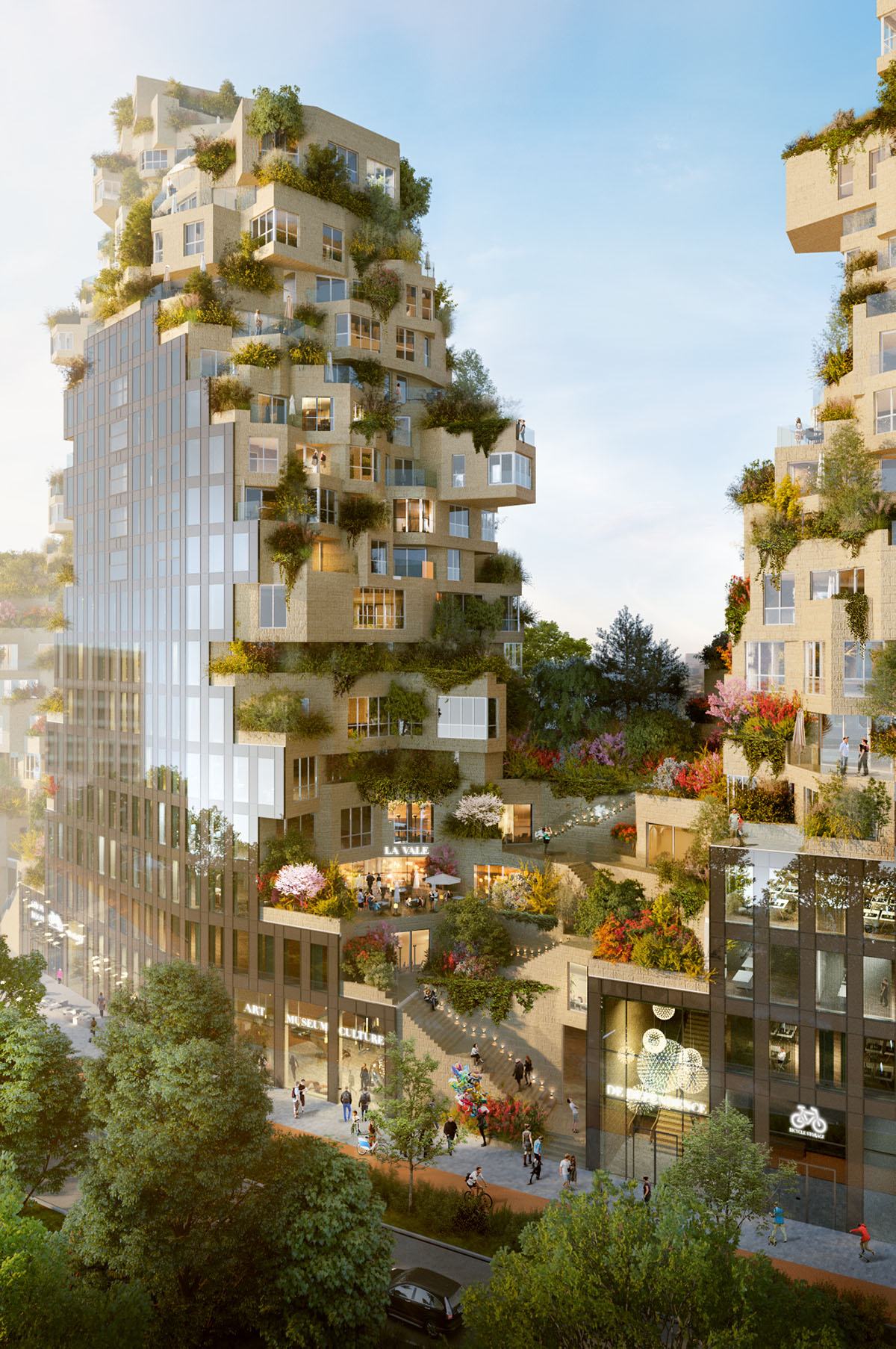 Photographed by architectural photographer Ossip van Duivenbode, the images show that the structures of three towers have raised and glass panels were started to be applied to the facade.

The unique appearance of the building makes Valley a striking landmark in an otherwise-conventional and rather corporate business district. Consisting of three towers, the building takes its name from the valley that is, as it were, carved out of the volume. 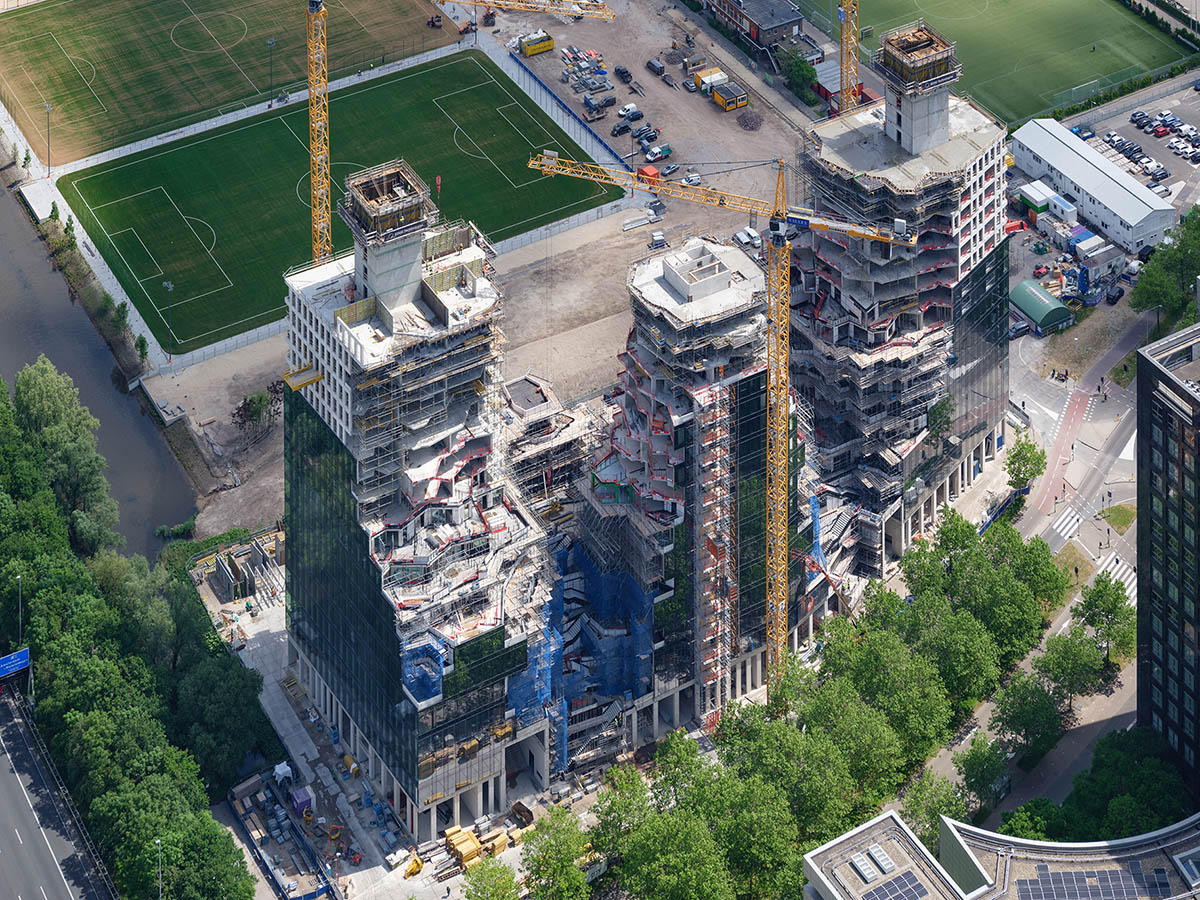 The accessible part of the valley space stretches up to the fifth floor, and will be publicly accessible via staircases that wind upwards from the ground floor. Below the valley is the grotto, a large interior hall providing access to shops and offices, clad in natural stone and lit by two large skylights that also serve as ponds for the valley.

The outside edge of the building is wrapped in glass to fit with its context in the business district, giving the appearance that the rugged landscape in the centre has been carved out of the building while affording the offices with floor-to-ceiling windows. 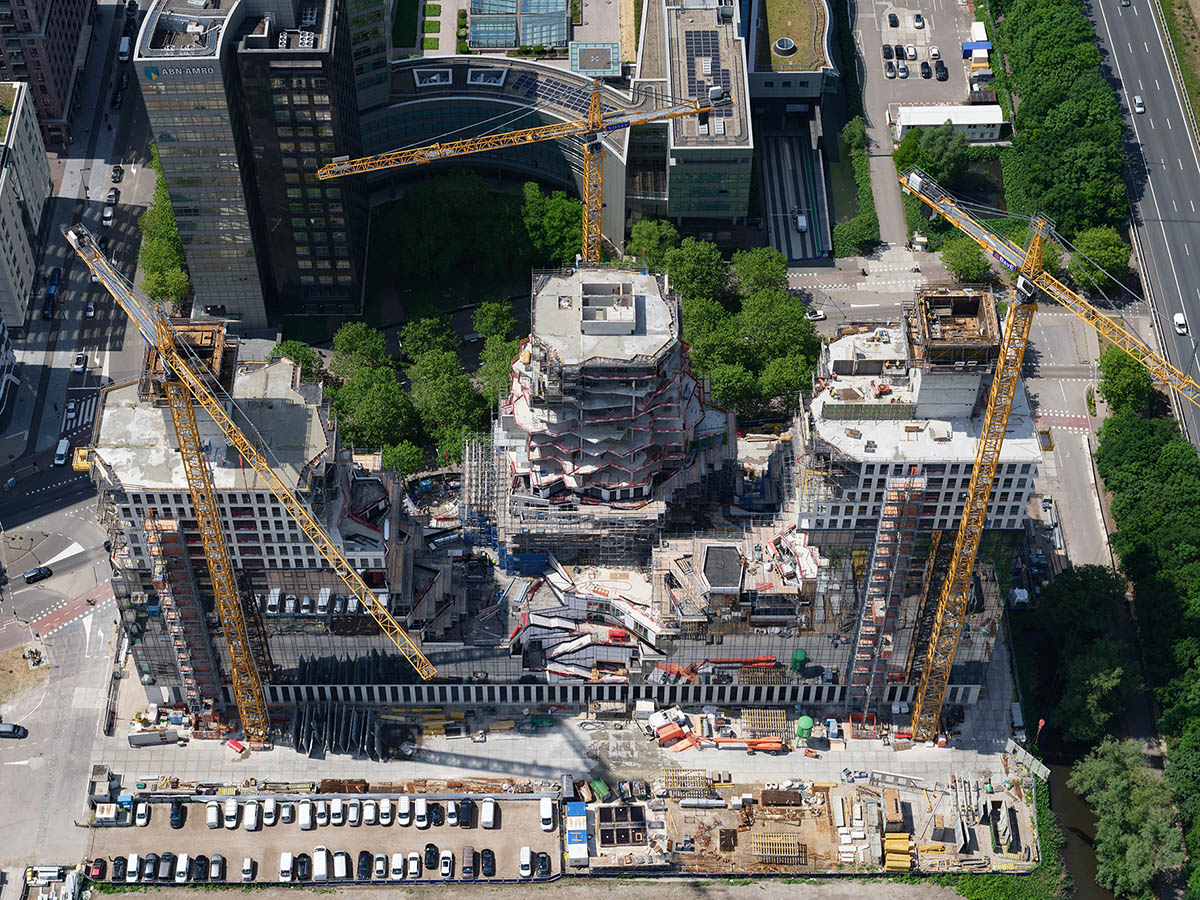 The apartments will have openable windows and sliding doors giving access to the terraces and balconies integrated into the stone facades.

The trees and plants, which are maintained using an automatic irrigation system, will have a positive effect on the sense of well-being of both people who live and work in the building.

In terms of sustainability, the dramatic greening and the arrangement of the terraced landscape to create optimum sunlight and daylight conditions for the apartments both contribute to the target of BREEAM-NL Excellent certification. 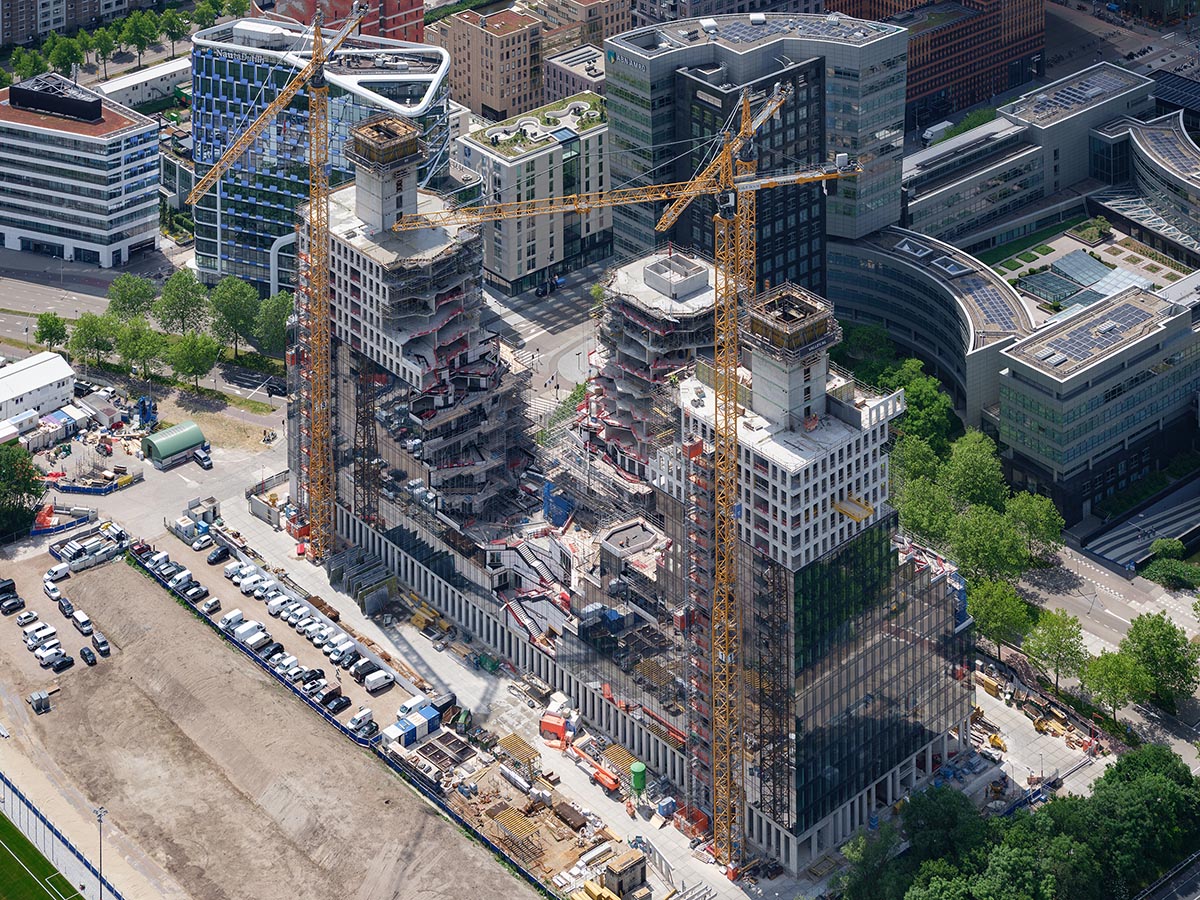 "Now that the highest point has been reached, it is clearly visible what Valley can be: an oasis for the Zuidas," said MVRDV founding partner Winy Maas.

"You go from a corporate CBD, like the ones you know all over the planet, into a human and green environment, forming a literal and visual transition towards the city of tomorrow: a city that is green and accessible, dense and human."

"The apartments with their densely planted terraces have a radically different appearance, small-scale and friendly; they ensure a human scale," Maas added. 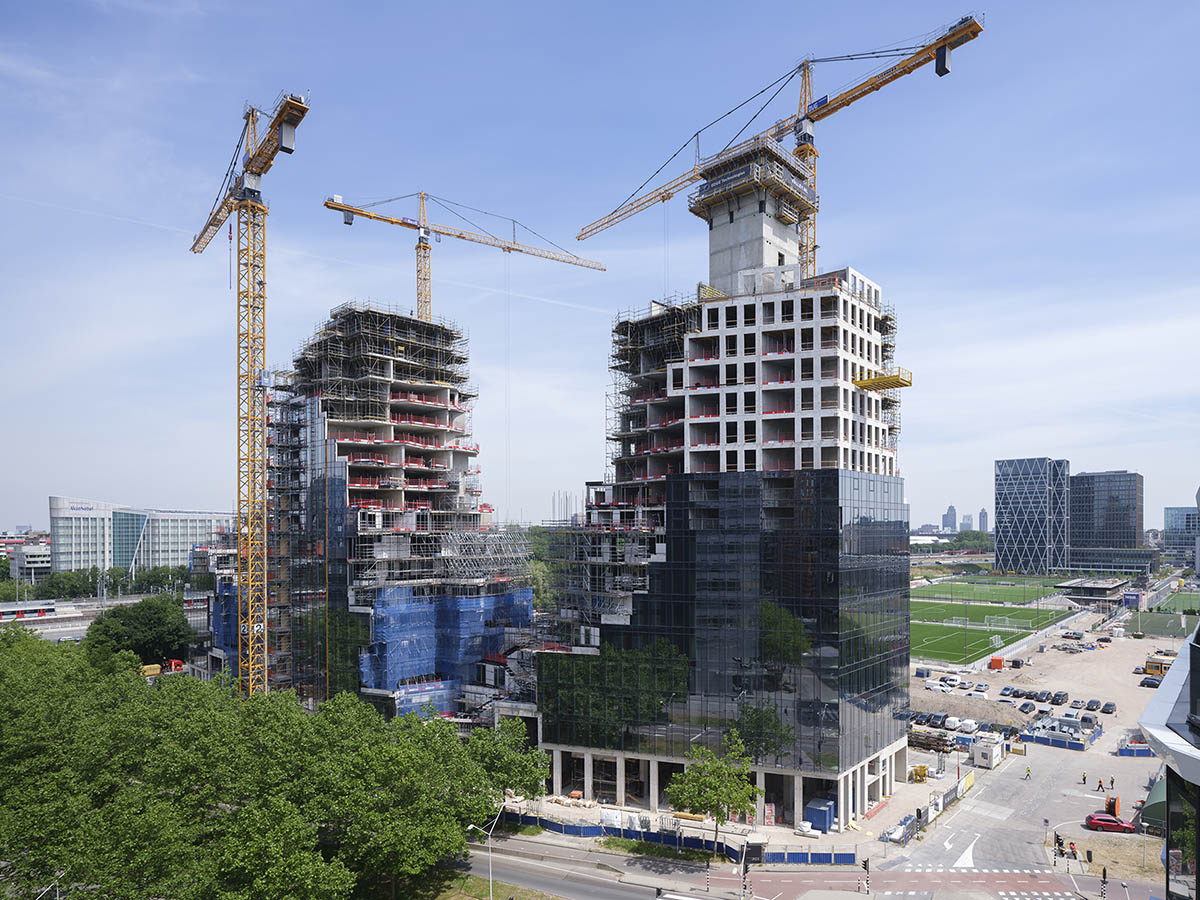 As Valley nears completion, until now, more and more tenants have been confirmed. Naturalis Biodiversity Center and Vrije Universiteit Amsterdam recently teamed up with EDGE Technologies and The Why Factory, MVRDV’s think tank at TU Delft, to launch Sapiens. Sapiens is a creative centre to be used as a museum, workshop, and debate centre where young people and scientists can work together on projects that improve our planet – an initiative that aligns perfectly with the objectives of the building’s design.

The building is expected to be completed in 2021.

Read more about the project on WAC.