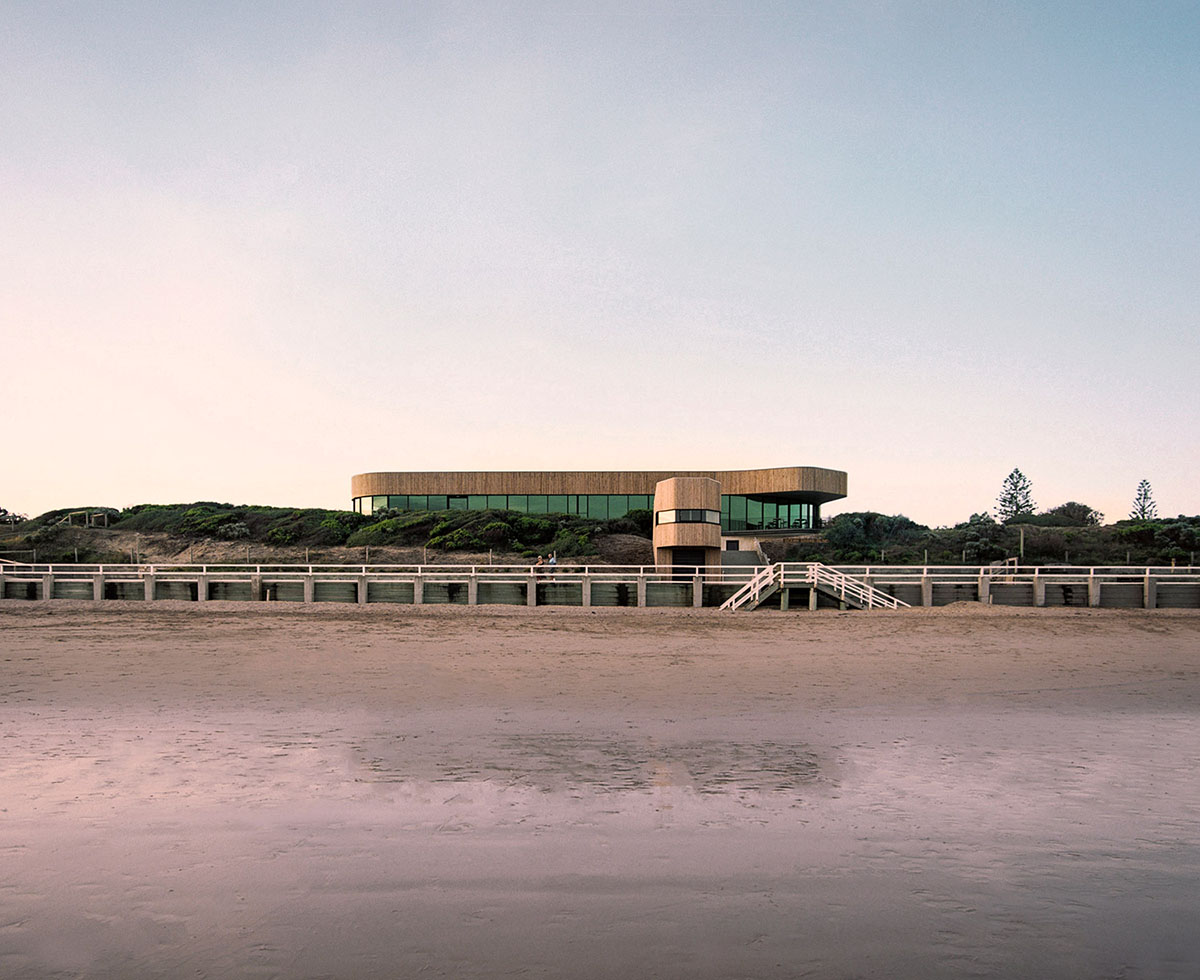 Melbourne-based architecture practice Wood Marsh Architecture has designed a surf club that takes inspiration from "the corrosive nature of Victoria’s sandstone coastline to guide its form and materiality."

Named Ocean Grove Surf Life Saving Club, the building is situated on the southern coast of Australia, near Melbourne and draws a soft silhouette with its timber rounded corners.

The building replaces the previous structure, which was built twenty five years ago, Wood Marsh uplifted the existing program and gave the building a contemporary and fresh look by working on a holistic functioning of the centre to "foster Ocean Grove SLSC’s position as a gathering place for the community." 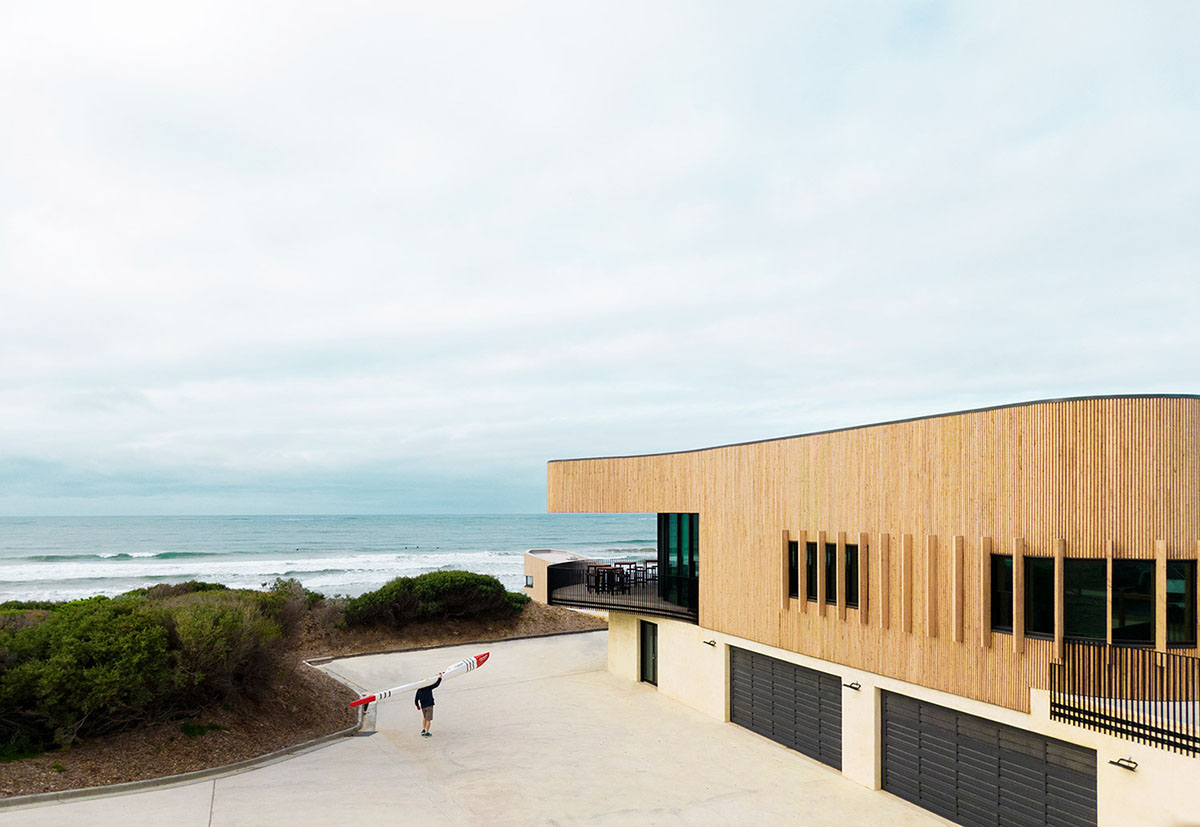 "In addition to a comprehensive surf lifesaving program, a layered operational brief unfolds internally, with operable walls and integrated acoustic treatment to provide various configurations for hosting a wide range of functions," said the studio.

The new version of club captures a robust ruggedness, through the ‘dune’ and ‘stack’ components, represented in the relationship between the horizontality of the club building obscured in the dunes and the verticality of the more prominent control tower. Each element appears to be softened by years of weathering. 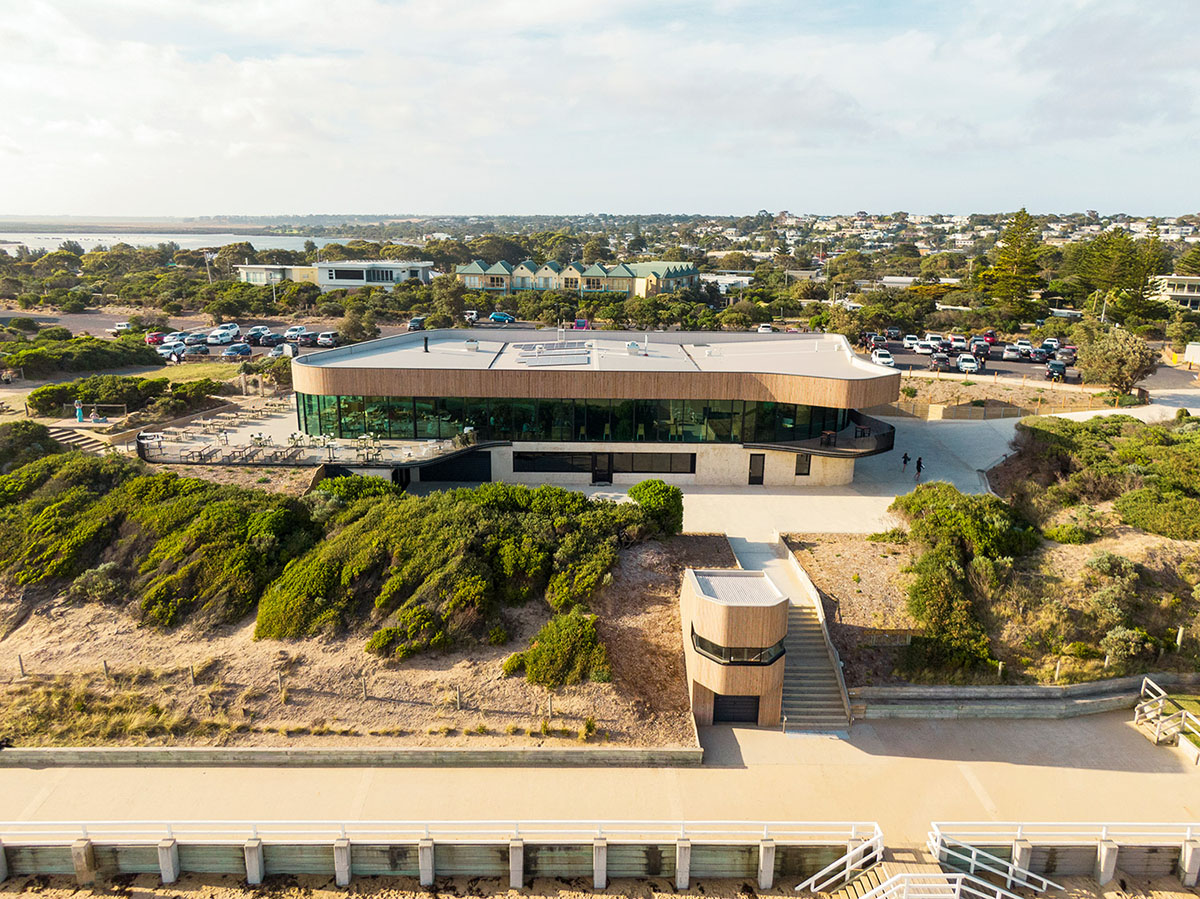 The building was positioned lightly in the landscape and within the footprint of the original building, the studio divided the largely expanded program into two levels.

The building follows the contours of the landscape and the upper level floats within the coastal vegetation, directing the more social aspects of the program, the café and bar, toward expansive Bass Straight views.

To improve accessibility, the studio lifted the entire ground plane. From most views, the building’s careful positioning and design give the illusion that it is a single-storey structure. 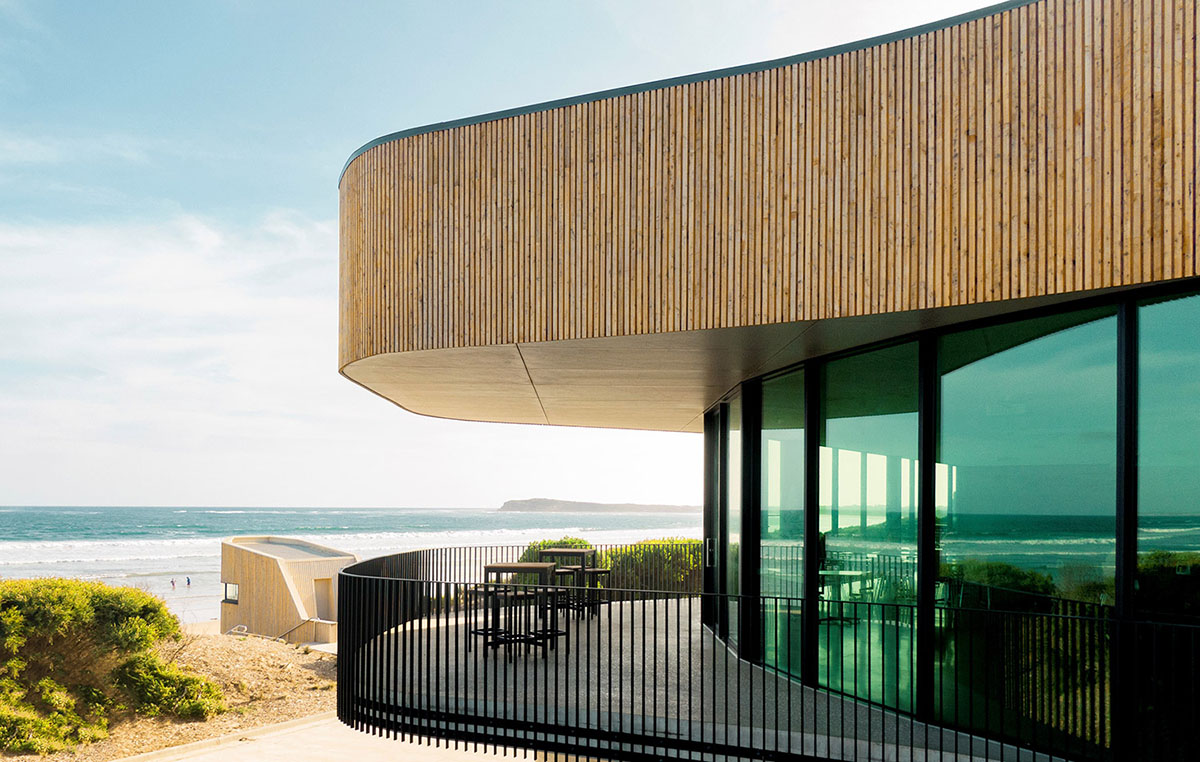 In addition to the main building, the studio also designed a control tower, which is positioned separately but clearly related to the main structure, the control tower acts "like a protruding rock formation positioned for optimal outlook to patrol the beach and shelter volunteers from harsh weather." 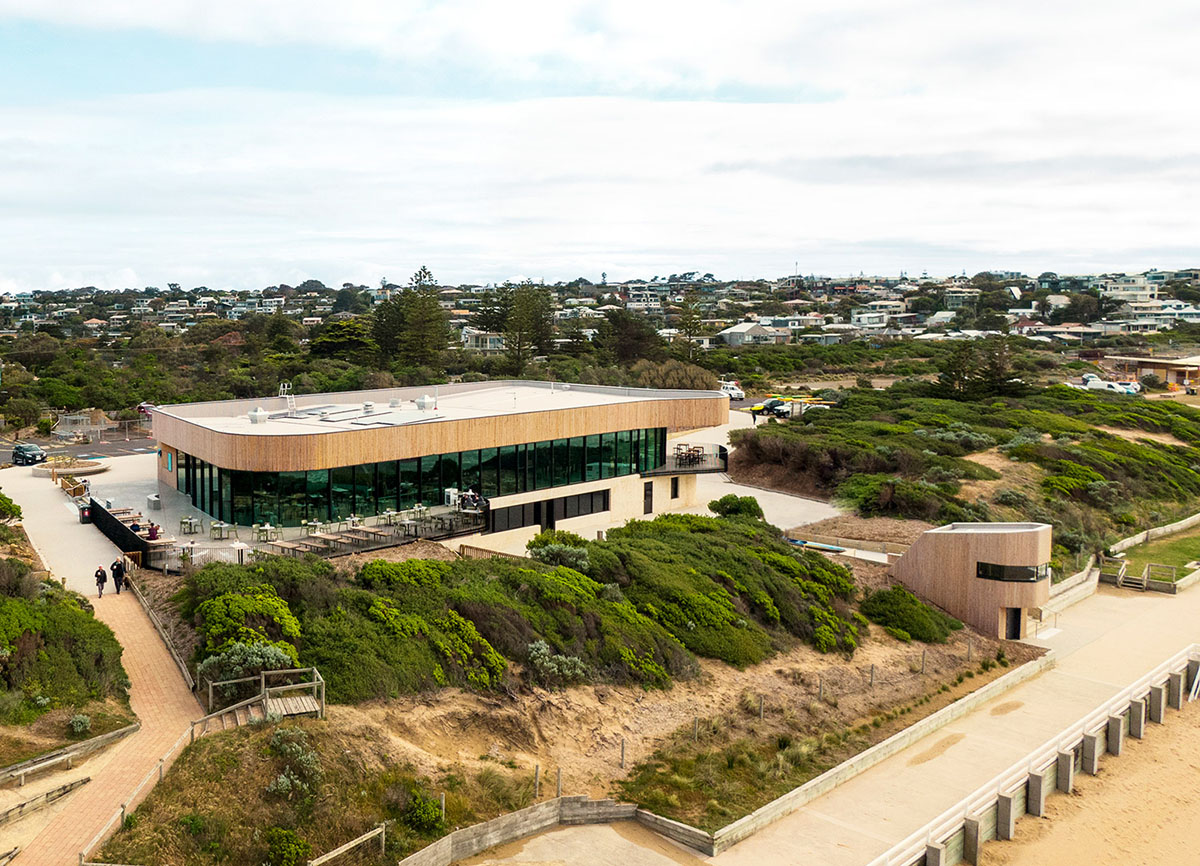 "The outpost acts as a coastal beacon or landmark which through clever construction phasing provided continual surf life guarding throughout the built," added the firm.

As the studio highlights, the design takes cues from "a robust and weathered approach to materiality utilising natural timber, dark metal, concrete and glass."

"Echoing its connection to the ocean and eroded dunes, there is a deliberate curving allowing shadows to bleed around the corners and blurring any otherwise harsh contours." 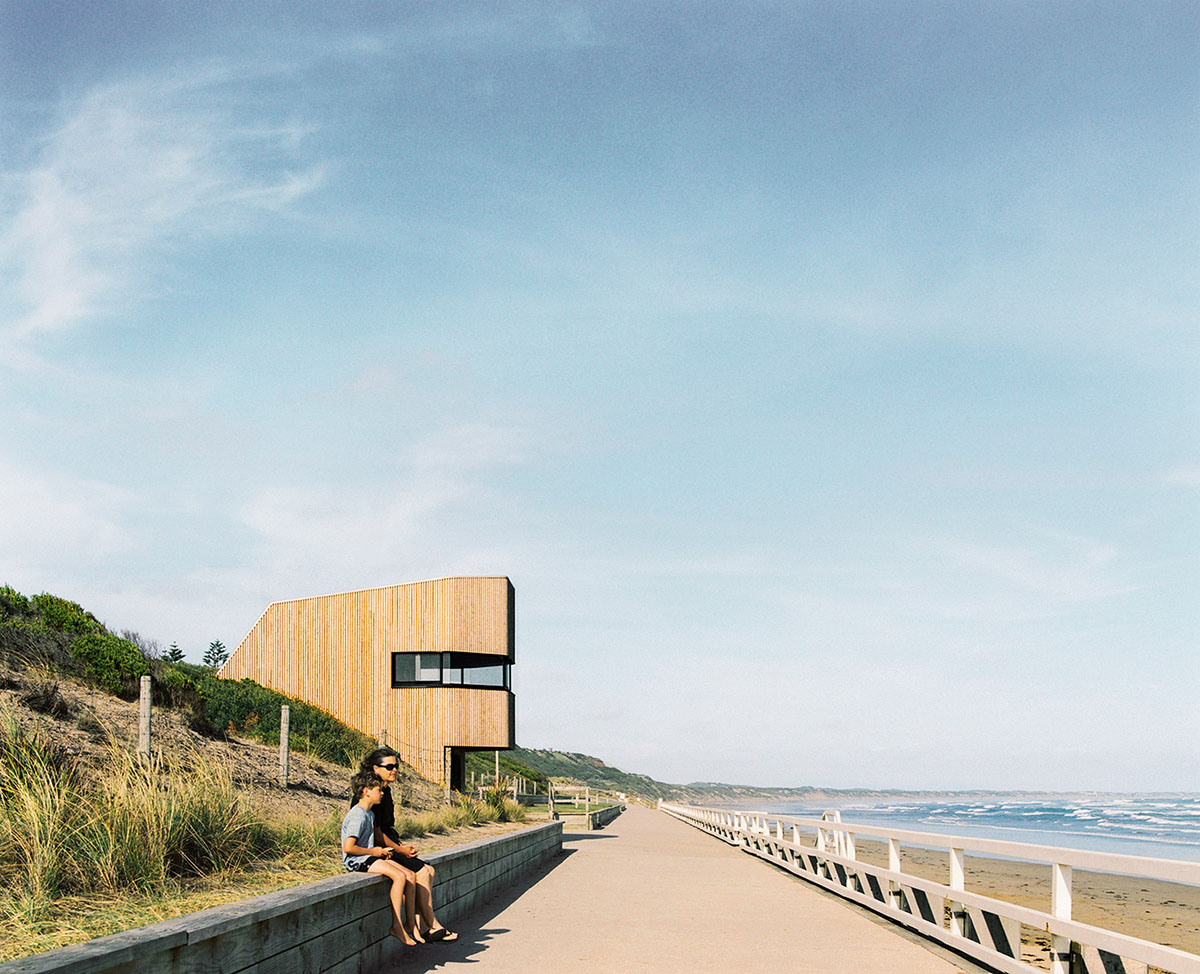 "Connected to site, landscape, and community, Ocean Grove SLSC is intentionally unobtrusive, subtly establishing a place where people come together around a shared appreciation of the waterfront," added the studio. 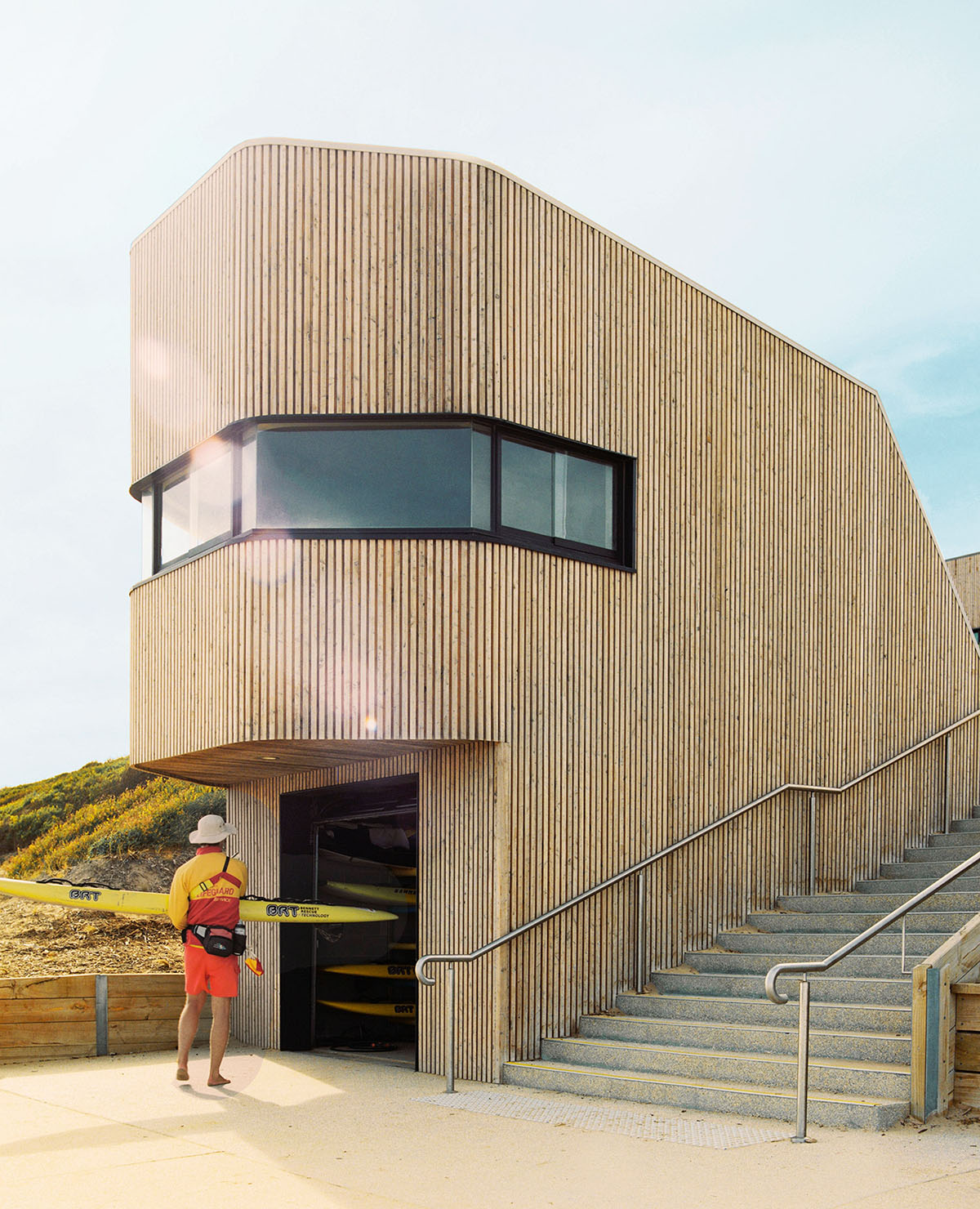 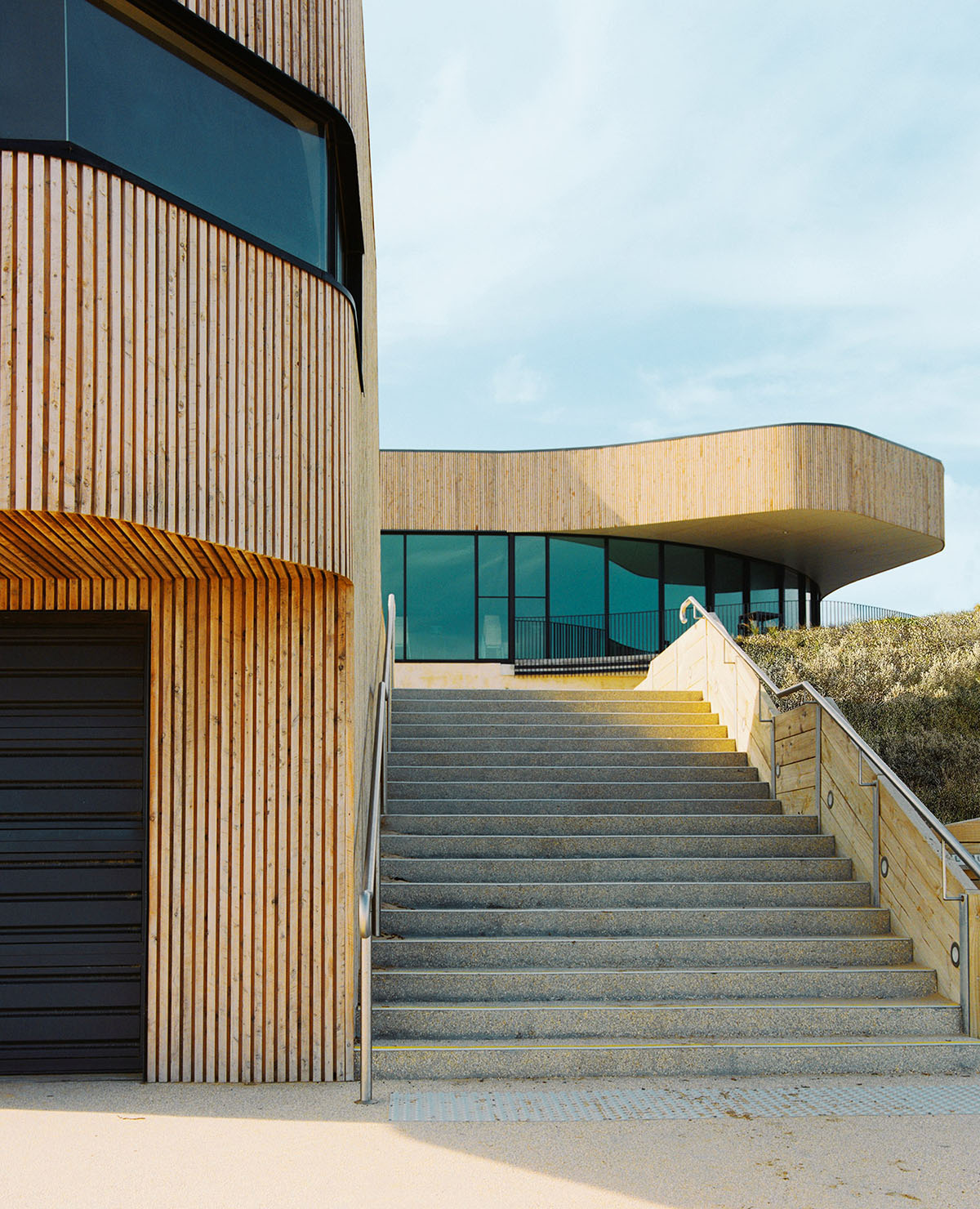 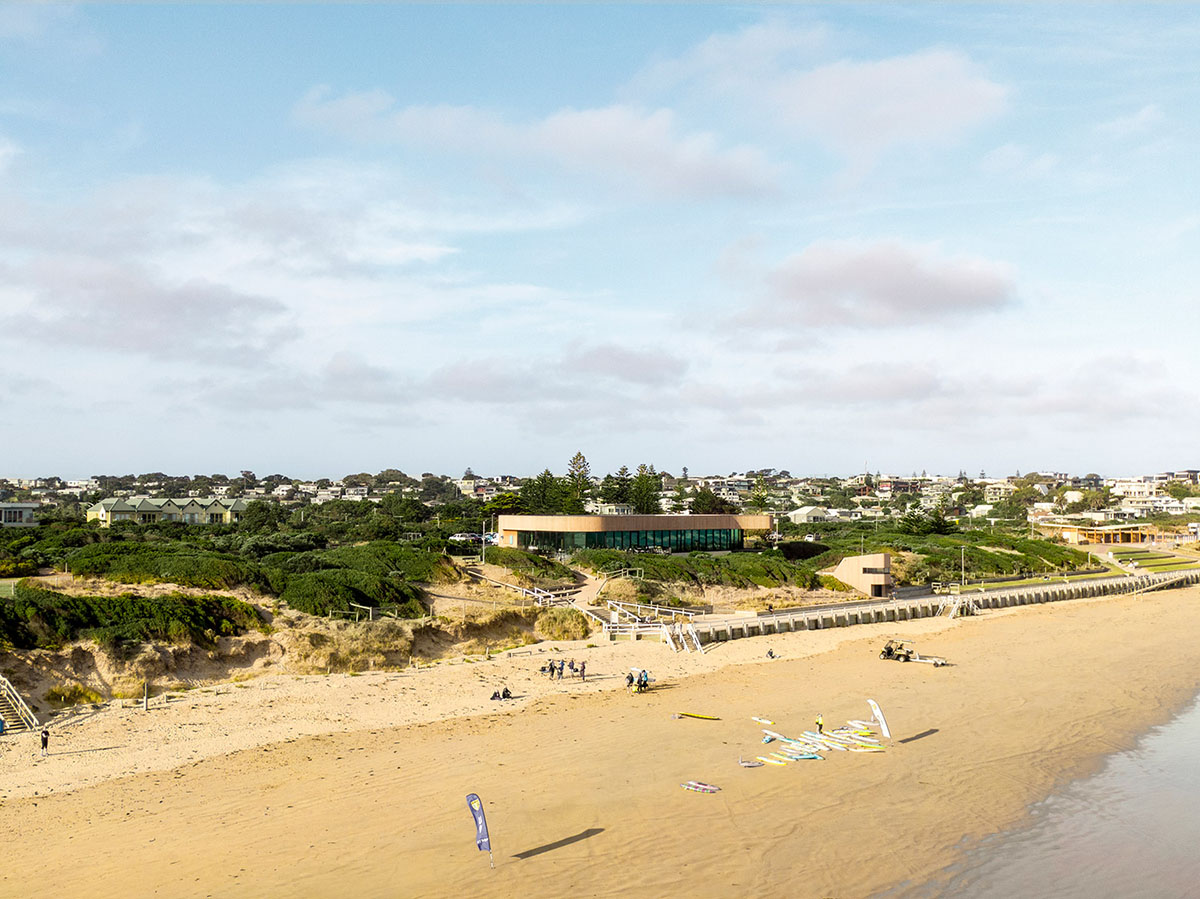 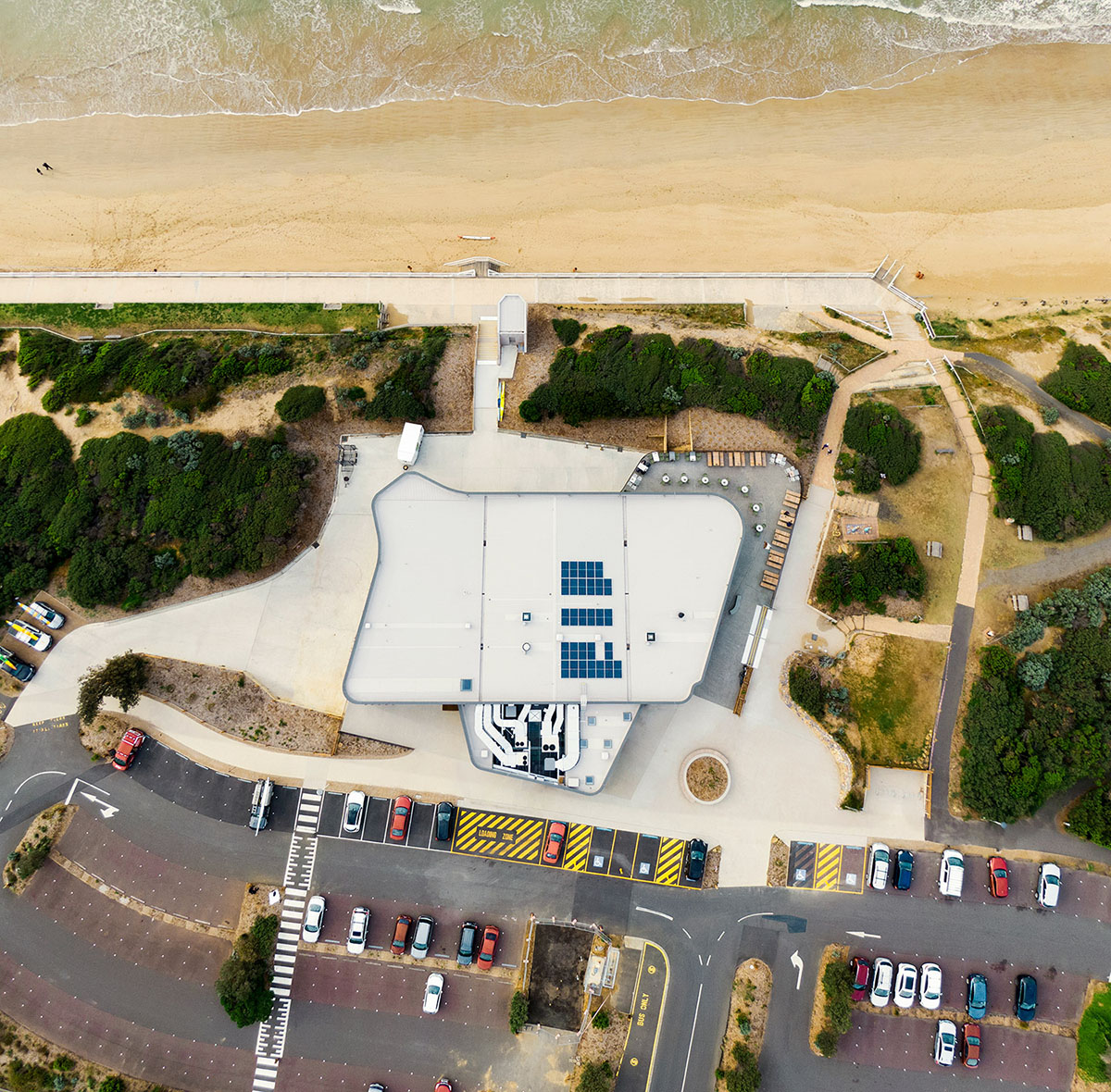 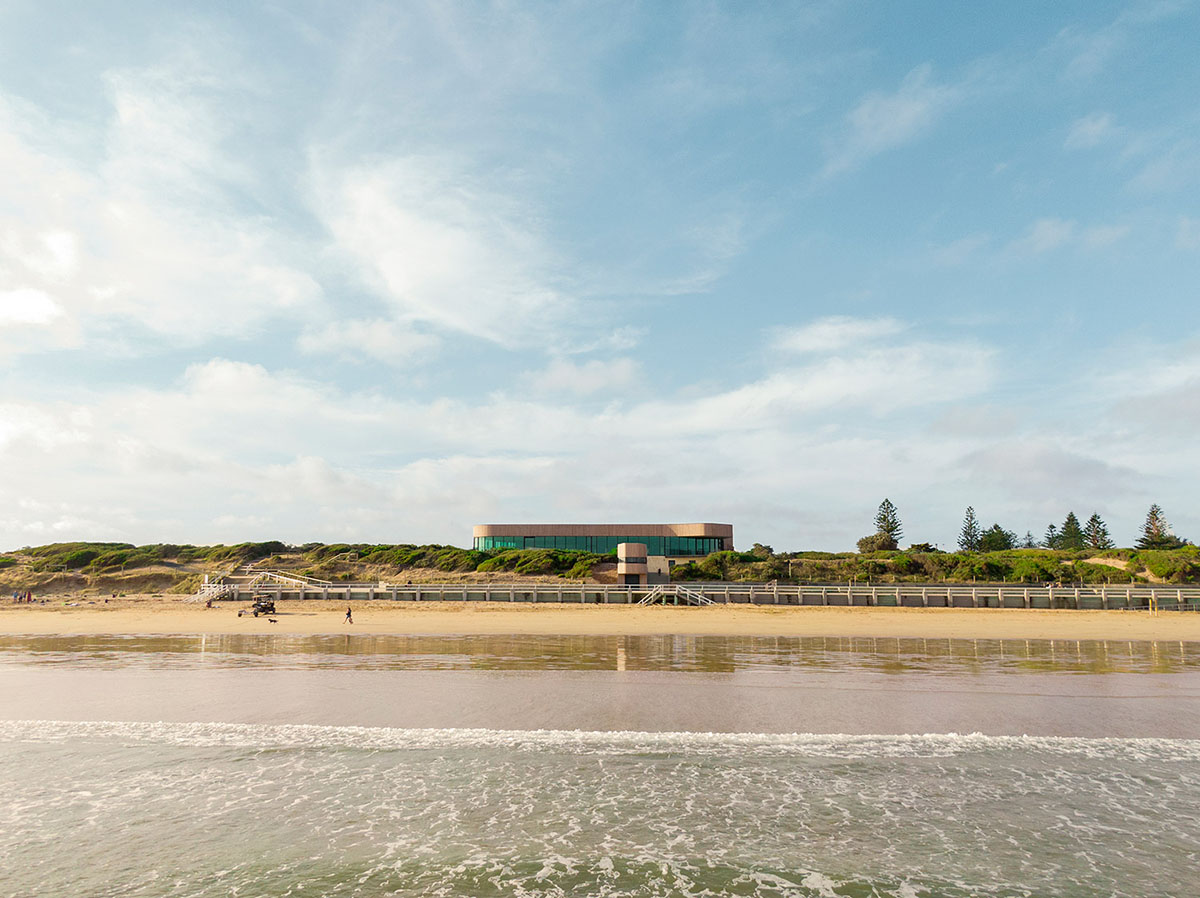 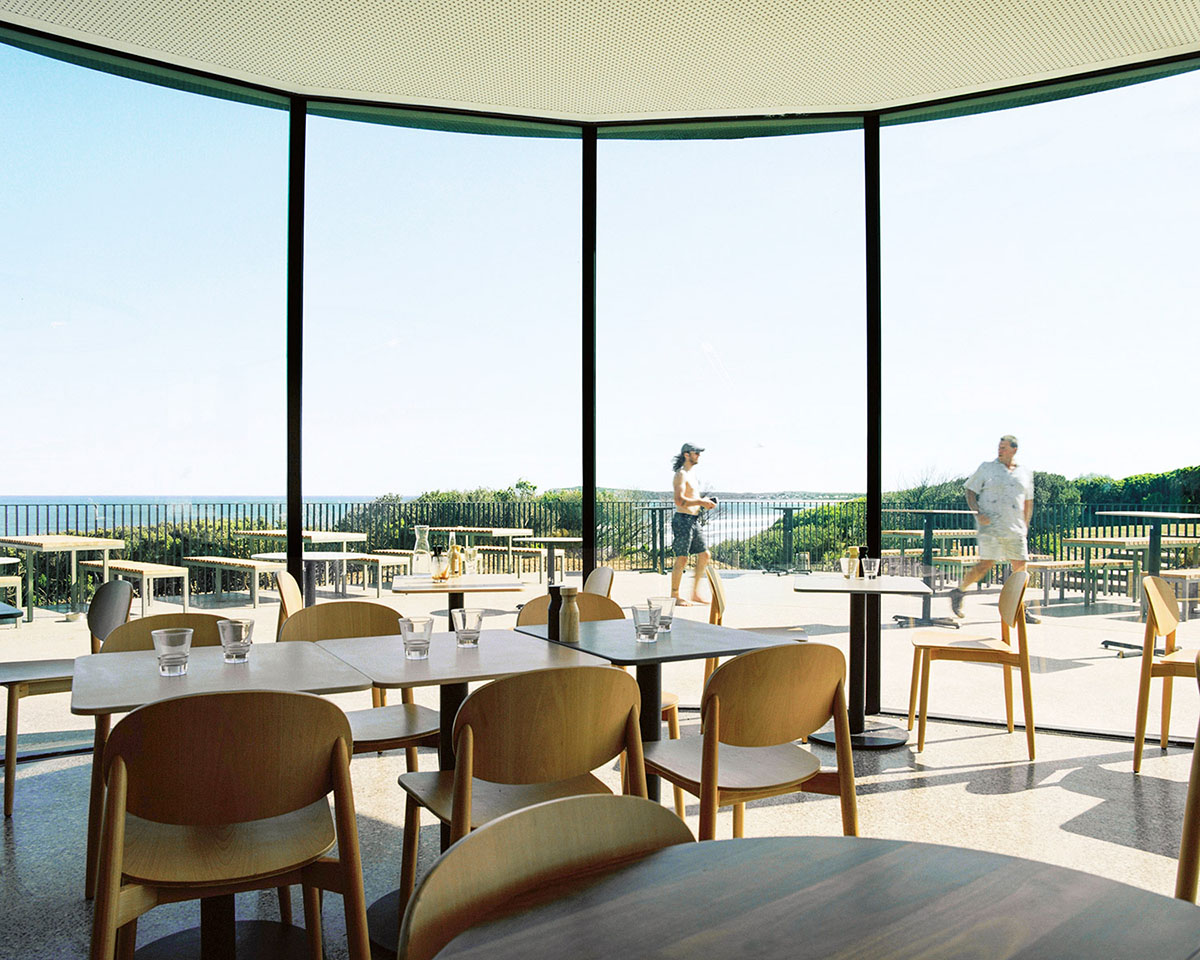 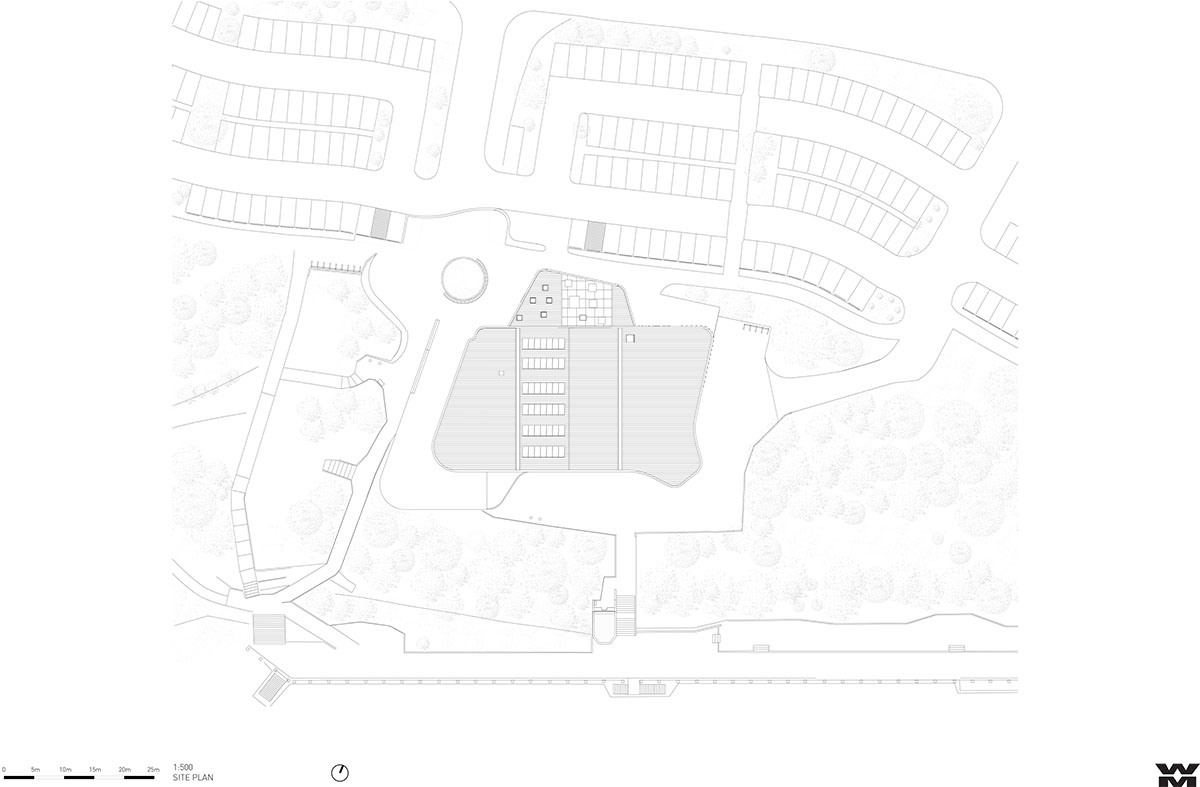 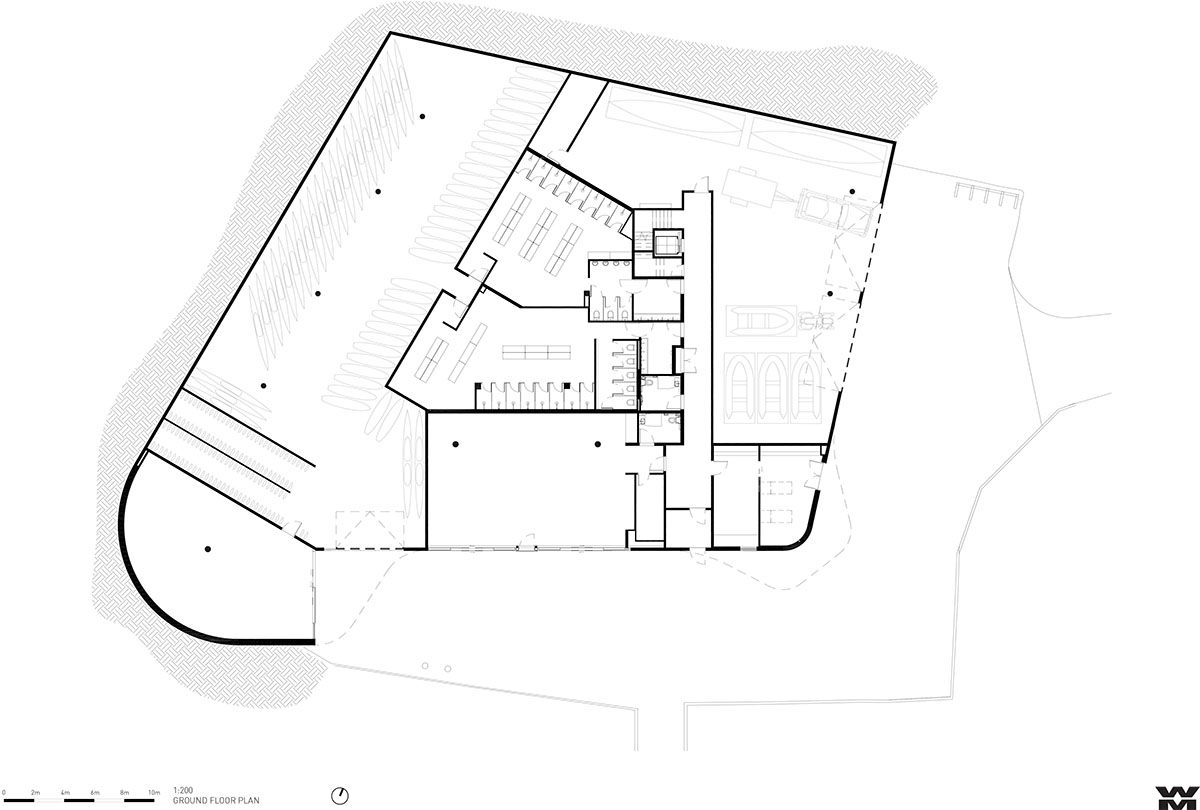 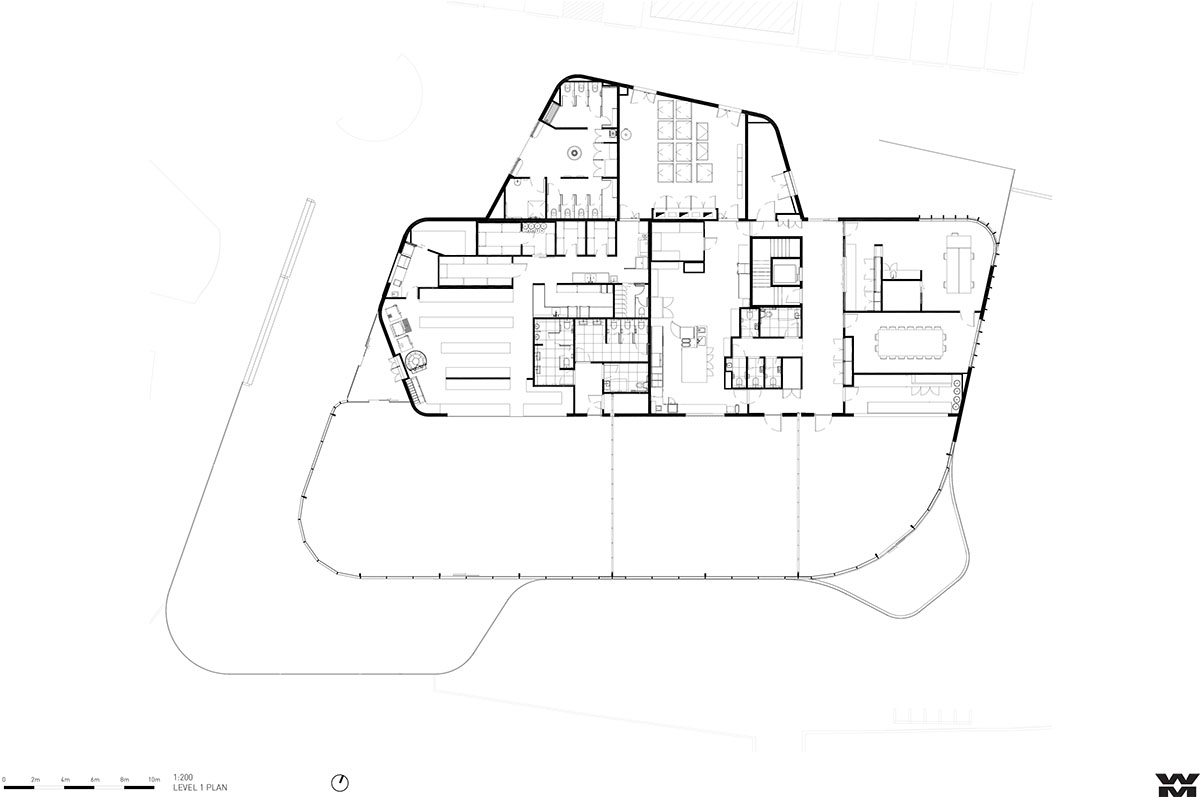 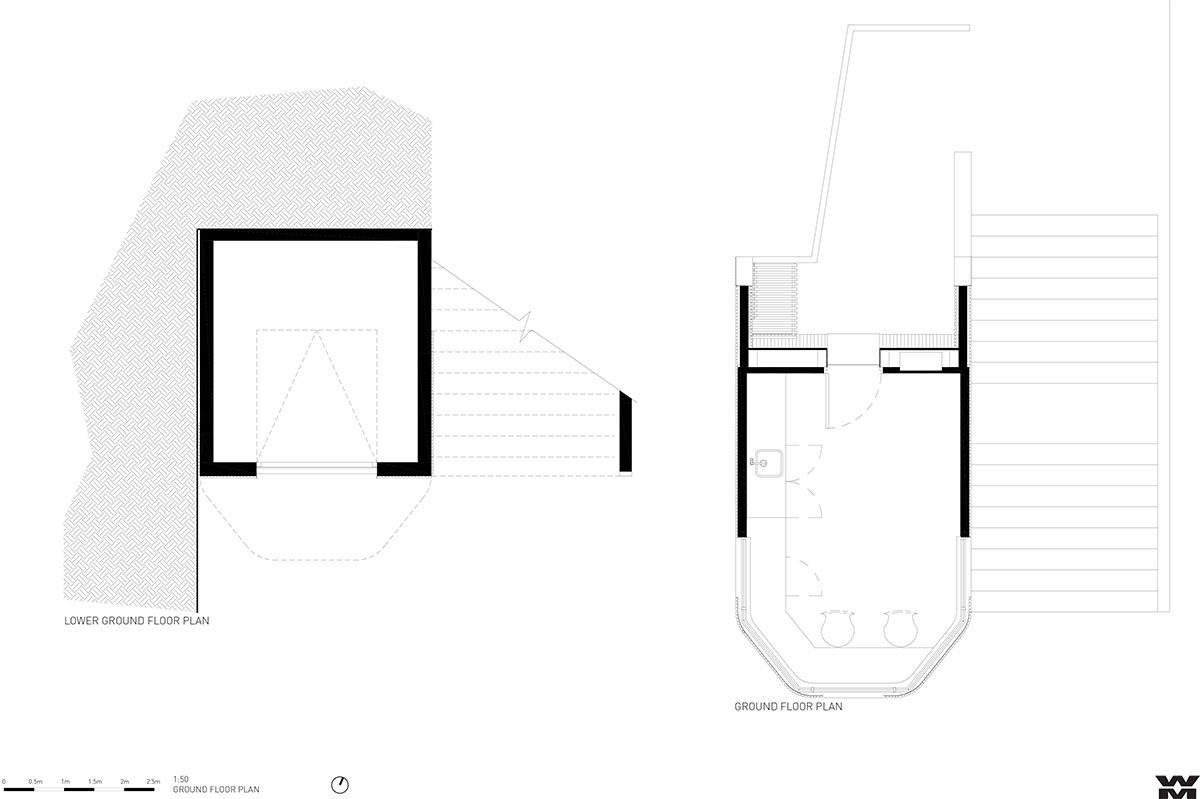 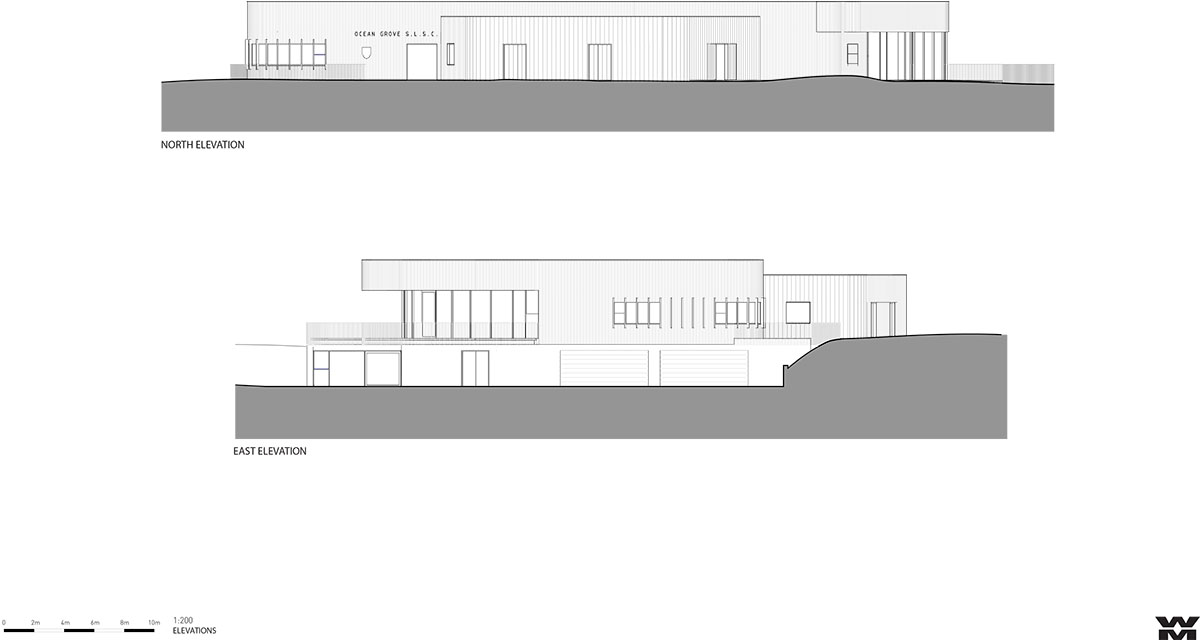 Wood Marsh previously completed Piccolo House, the new project is located in the 5 John Street of South Melbourne and Towers Road House which was designed as a sculptural private residence that features high arc-shaped concrete walls and are placed under a disc-shaped zinc roof in the Melbourne suburb of Toorak.

Wood Marsh was founded by Roger Wood and Randal Marsh in 1983, and their early philosophical and aesthetic ideals have been sustained to inform their architecture throughout the ensuing decades.

The firm centred around residential architecture. Wood Marsh has office in Melbourne.