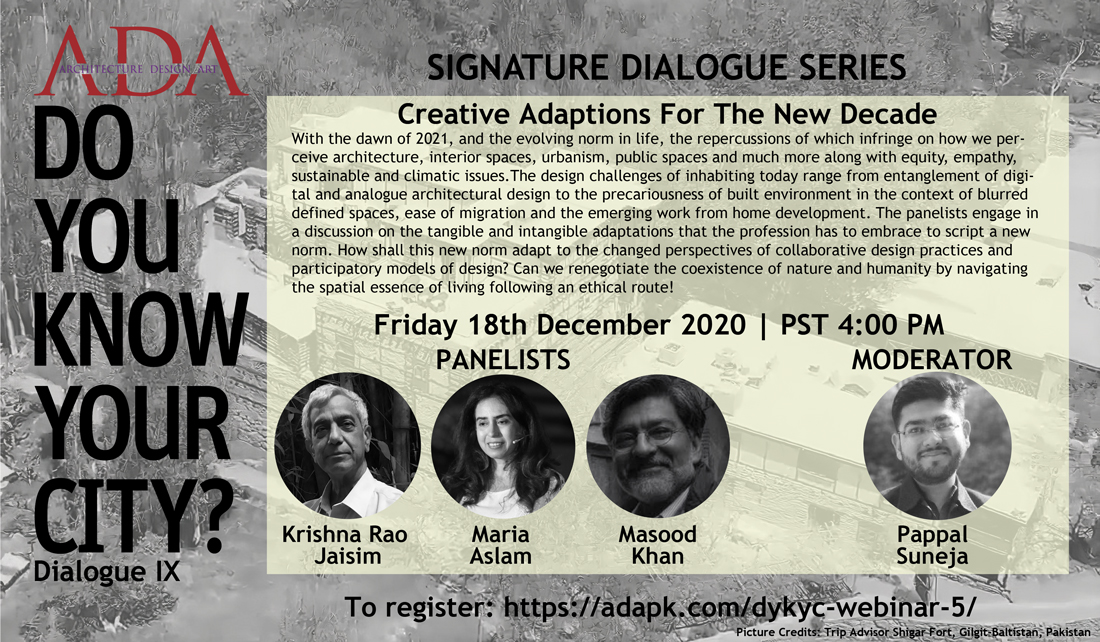 Architecture-Art-Design (ADA) Magazine’s Signature Dialogue Series - IX edition is announced. As the curtain draws a close upon the year 2020; a year of constant reflection, the speakers shall deliberate the creative adaption of a new decade. The speakers include architect Krishna Rao Jaisim from India, Conservationist, and architect Masood Khan from USA/Pakistan, and Maria Aslam Founder of ADA, Pakistan herself along with moderator architect Pappal Suneja joining us from Germany. The ADA Webinar series closes its online sessions of 2020 on this mercurial year with a hope for new sustainable directions.

Session Theme: With the dawn of 2021, and the evolving norm in life, the repercussions of which infringe on how we perceive architecture, interior spaces, urbanism, public spaces, and much more with equity, empathy, sustainable and climatic issues. The design challenges of inhabiting today range from the entanglement of digital and analog architectural design to the precariousness of the built environment in the context of blurred defined spaces; ease of migration and the emerging work from home development.

The panelists shall engage in a discussion on the tangible and intangible adaptations that the profession has to embrace to script a new norm. How shall this new norm adapt to the changed perspectives of collaborative design practices and participatory models of design? Can we renegotiate the coexistence of nature and humanity by navigating the spatial essence of living following an ethical route!

Krishna Rao Jaisim - He has enjoyed the practice of architecture for over five decades now. His early years in the field were inspired by greats such as Buckminster Fuller, Koenigsberger, and Geoffrey Bawa. And in the sixties, Ayn Rand’s The Fountainhead gave his aspirations a whole new meaning. He started Jaisim Fountainhead in 1970. Since then he has created and recreated innumerable homes, institutions, and commercial enterprises. He has written over 150 papers and articles, made about 1500 presentations, serves on several boards and councils, and finds time to interact with students of architecture all over India. His iconoclastic views and individualistic endeavors are the hallmarks of his creativity. Today, he continues to pursue the adventures of the built environment, searching and researching beyond the boundaries of time and space.

Masood Khan - He is an architect trained in Pakistan and in the United States who has worked for nearly two decades in the conservation of cultural heritage. He was responsible in 1986-1988 for the World Bank-sponsored study for the conservation of the Walled Study of Lahore, in Pakistan, and since 1993 has been a senior consultant for the Historic Cities Support Programme of the Aga Khan Trust for Culture. In this capacity, he has been responsible for technical support in community development and cultural support programs, and for the conservation of a series of monuments, including Shigar Fort and the Ganish Village Conservation Project. Masood Khan has also been active in architectural education and has taught at the National College of Arts in Lahore, at the Aga Khan Program for Islamic Architecture at Harvard and MIT (Cambridge, Mass.), and, as a Fulbright Professor, at the University of Engineering and Technology in Lahore.

Maria Aslam - She is a prolific writer, architectural historian, and environmental activist, working in the fields of interior design, architecture, and heritage conservation. As the founder and editor-in-chief of ADA Magazine, she has pioneered the ADA Awards, the first of its kind, in the disciplines of Architecture, Design, and Art. Alongside her architectural and interior design practice, ArchWorks, she is the chairperson of Pakistan’s Institute of Interior Designers and has published a book ‘Interiors of Pakistan Volume I’ in 2016. With a Bachelor’s of Architecture from Indus Valley School of Art and Architecture and a Master’s in Architecture from McGill University, in her career of over two decades, she has represented Pakistan on a multitude of platforms as a juror, critic, convener, and speaker.

Pappal Suneja: He is a design researcher, an architect, and a writer. He is the founder and curator of the Architectural Journalism & Criticism Organisation and Country Editor for the World Architecture Community.

To enroll, visit the link and add a spot in our mailer list.