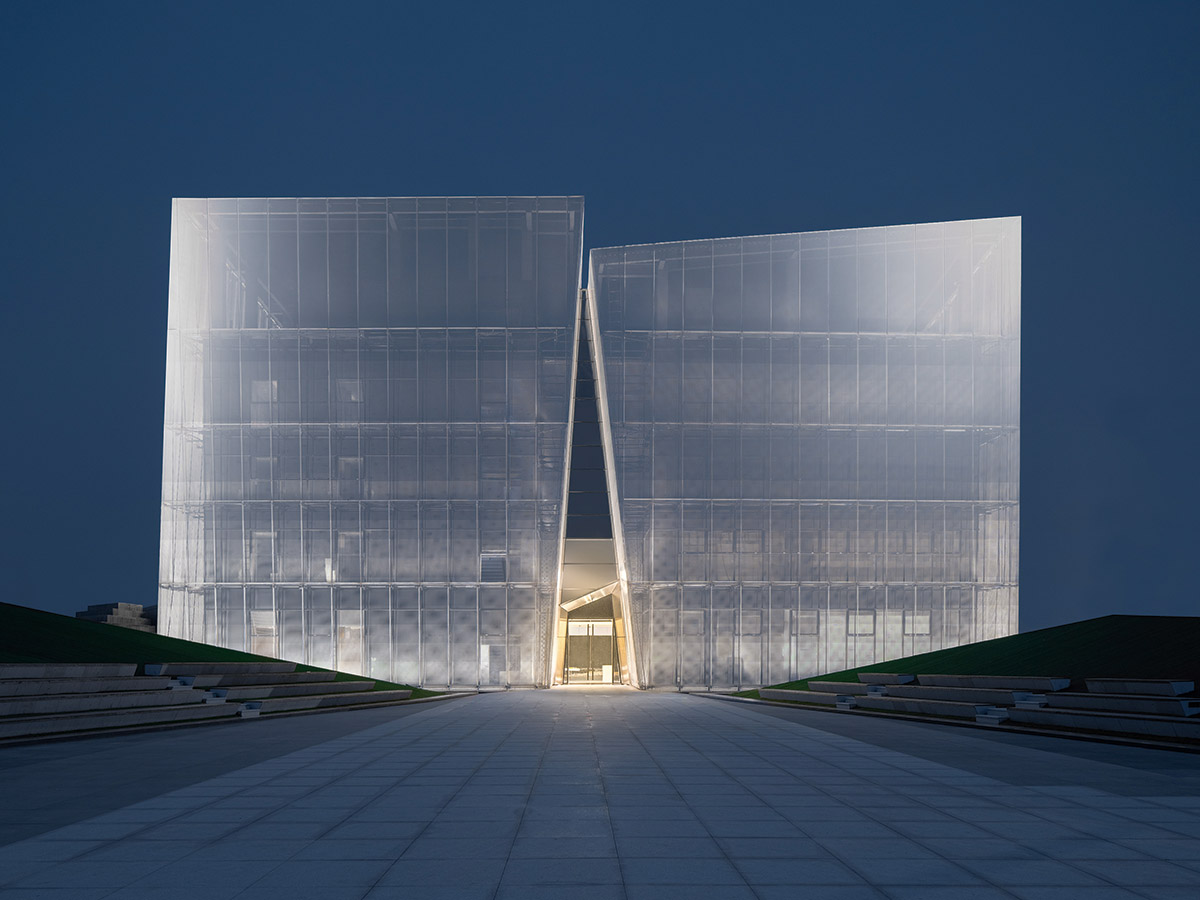 Beijing-based architecture and interior design studio aoe has built an exhibition center composed of all-white volumes that gently touch each other and create irregular gaps between volumes. 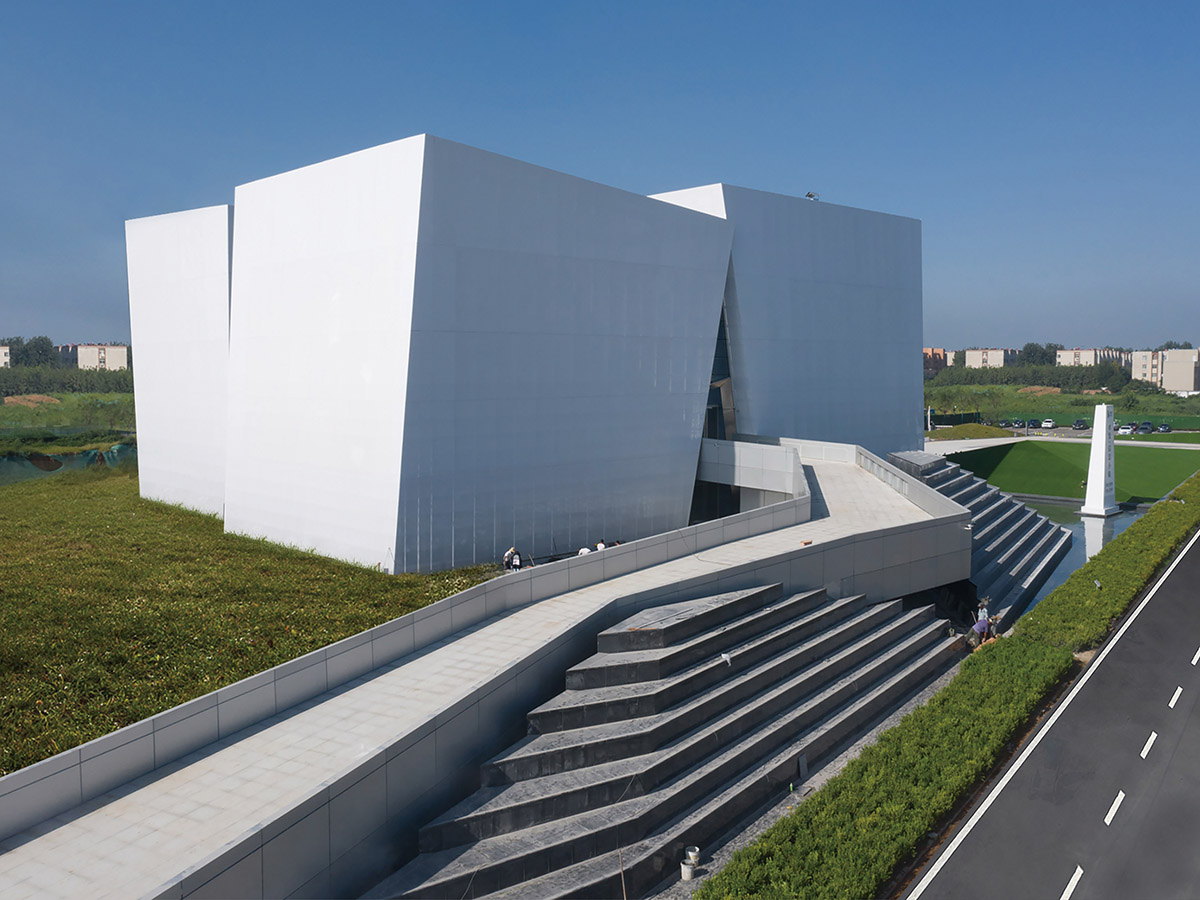 "The area has not yet been developed on a large scale," said aoe. 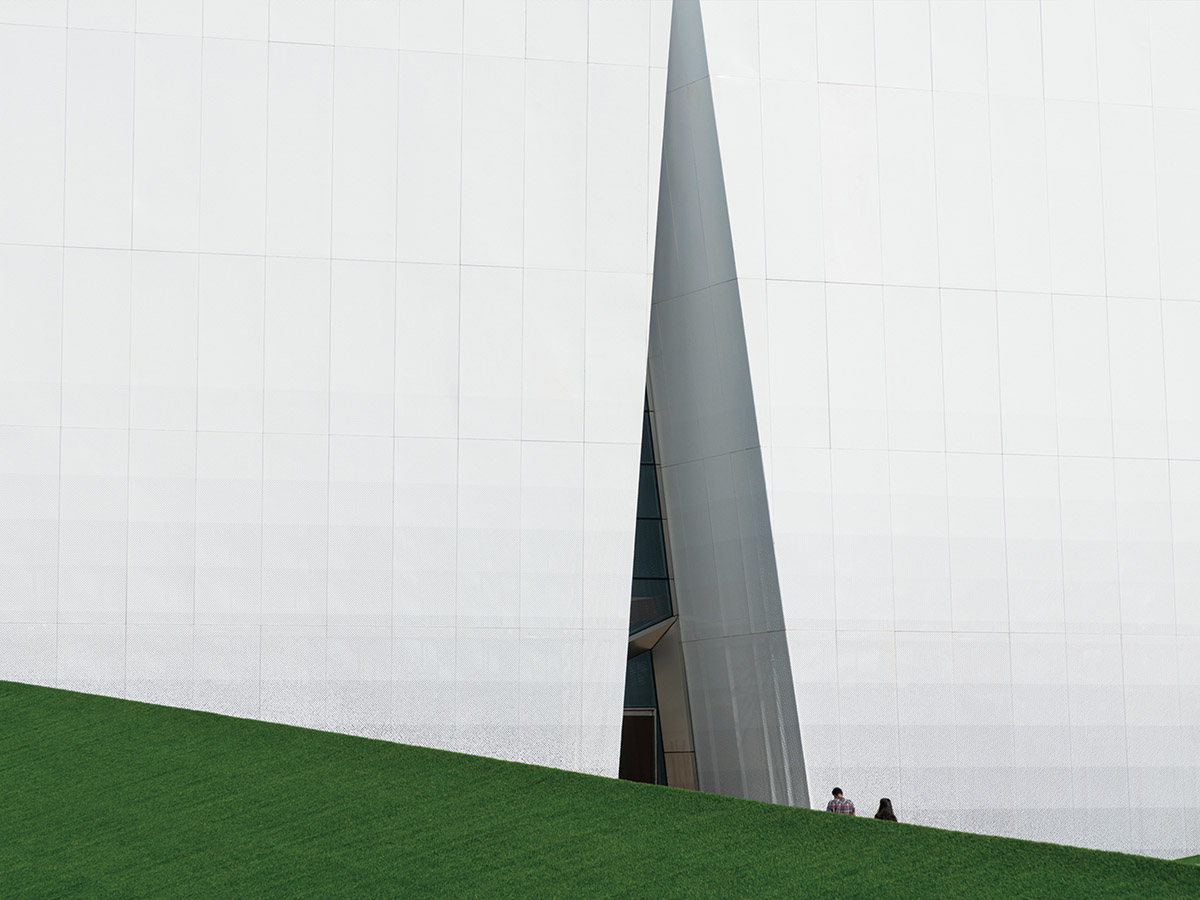 Through a four "stones" arrangement, like a stream of clear spring water flowing from the cracks in the rocks. The main structure is assembled out of white perforated panels, glowing with pure and elegant cultural motifs.

The northern boundary is designed like a mountain waterfall, combined with green microtopography, giving the whole building an air of refinement filled with cultural significance. 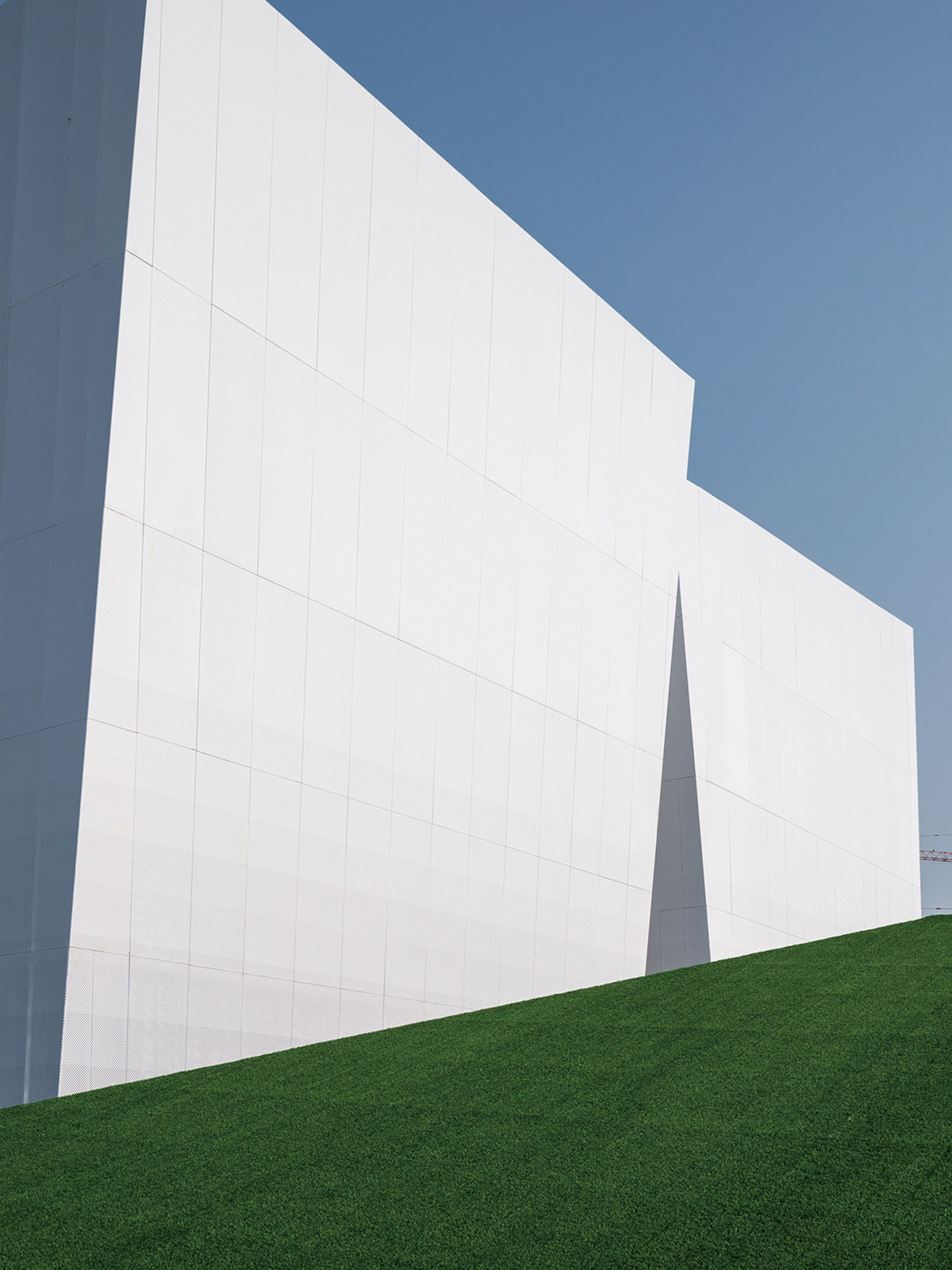 The main entrance is located on the west side. In order to eliminate the visual impact of the messy surrounding environment, geometrical hills are designed to surround the square, which slowly rises as people enter the site, gradually blocking out the view. Mountains, water, and marble are fused together in this undeveloped wilderness. 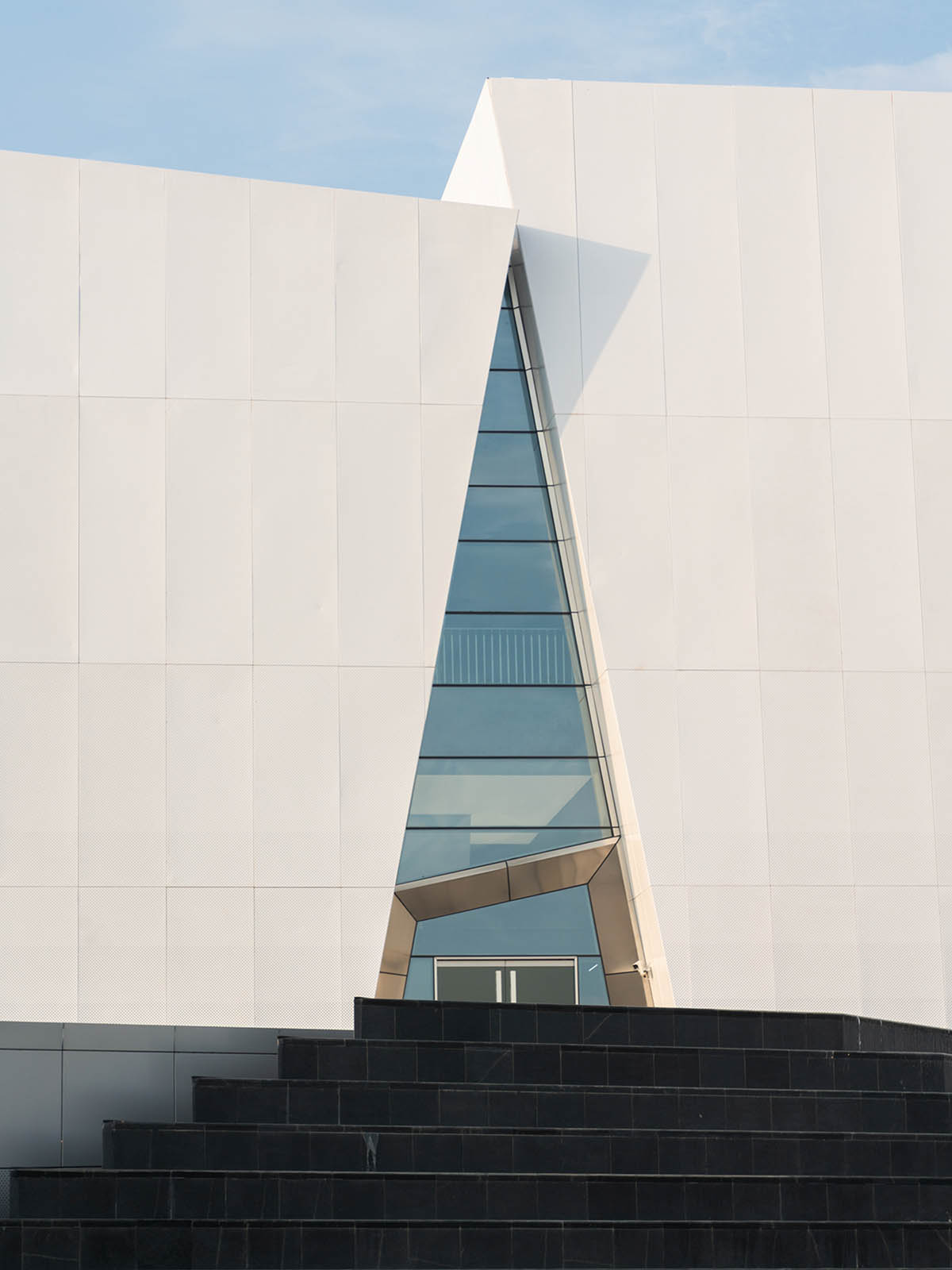 The curtain wall sections are slanted, nestled, and interlaced inside, and the gap between the sections naturally forms the entrance of the building.

Everything happens inside the space covered by the perforated plate curtain wall, connected to the outside world only through the irregular gaps. 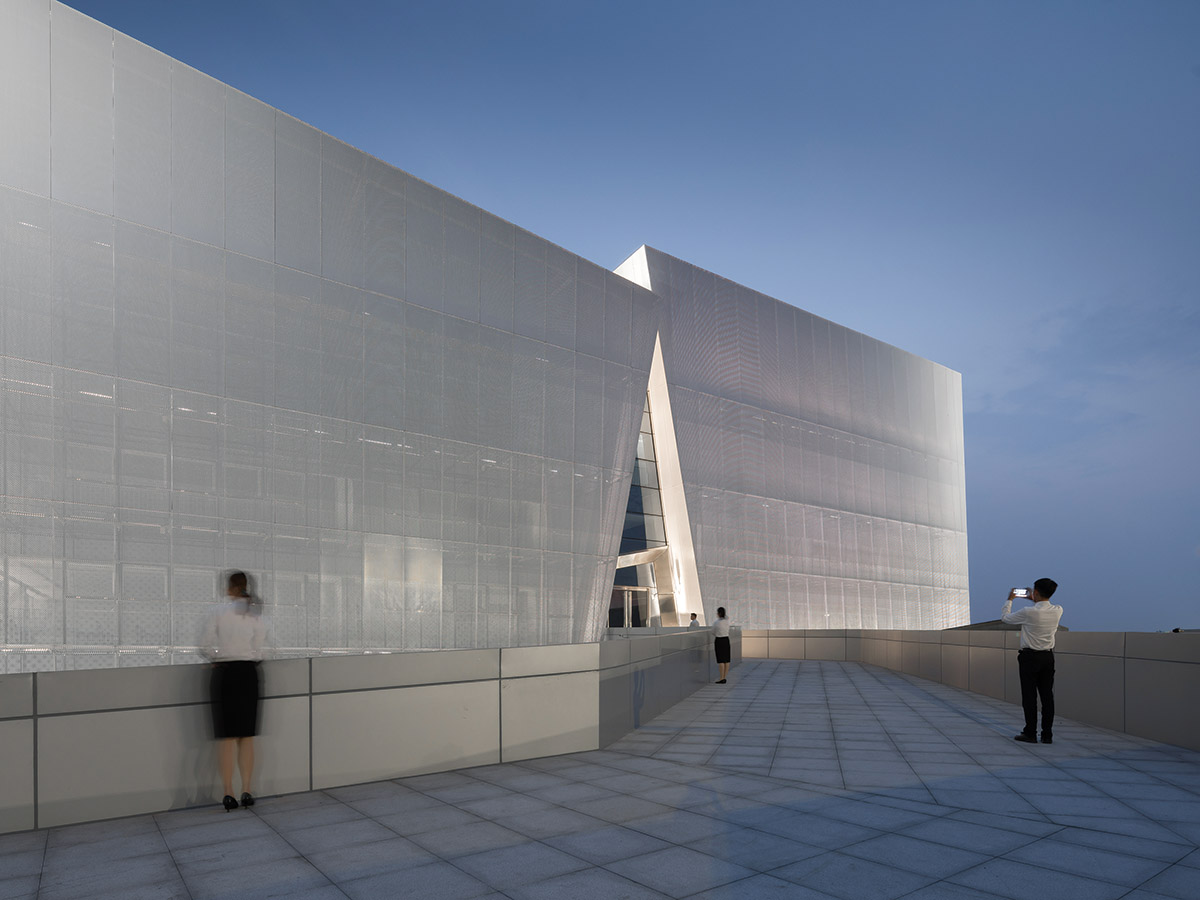 The interior of the building is obscured by the white perforated plating, and as night falls, light shines through the perforated plates to make the whole building glow, like a piece of shiny marble standing in the wilderness. 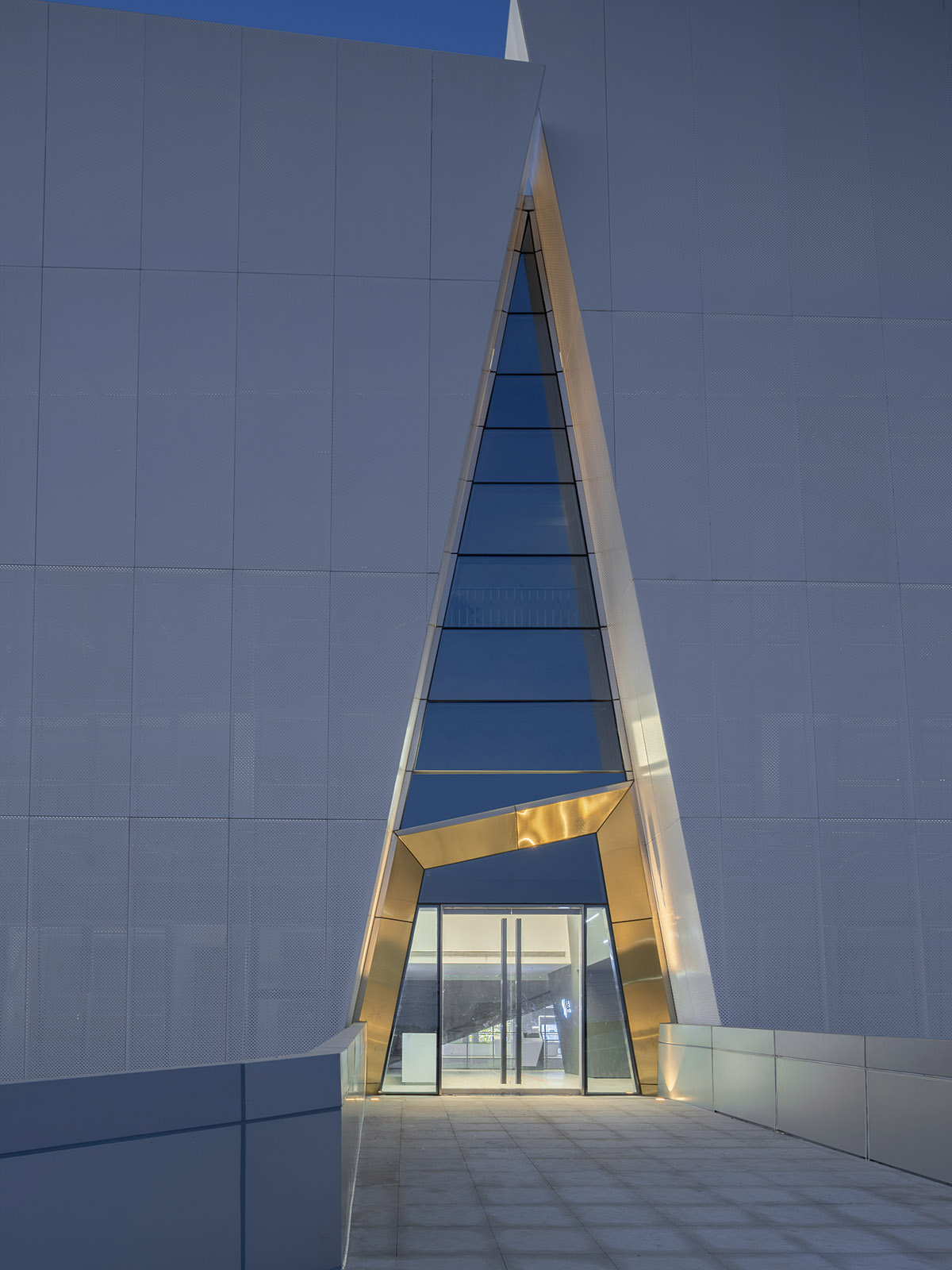 The main function of the third and fourth floors of the building is for office space, which requires a relatively private environment, so the number of perforation is lower, and it is relatively more enclosed while ensuring sufficient lighting. 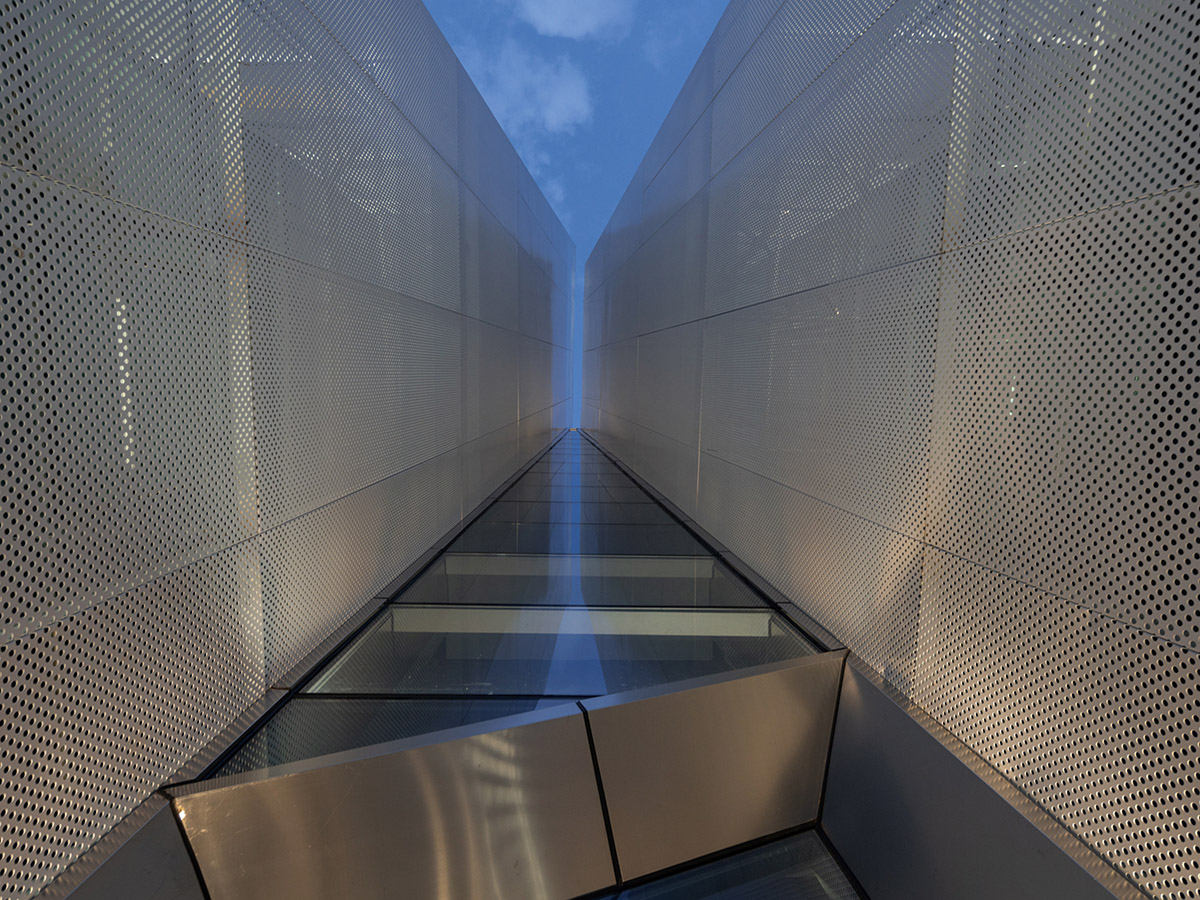 The gradual changes in the perforated plates allow the permeability of the building facade to gradually change from top to bottom, giving a sense of depth to the overall surface of the building. 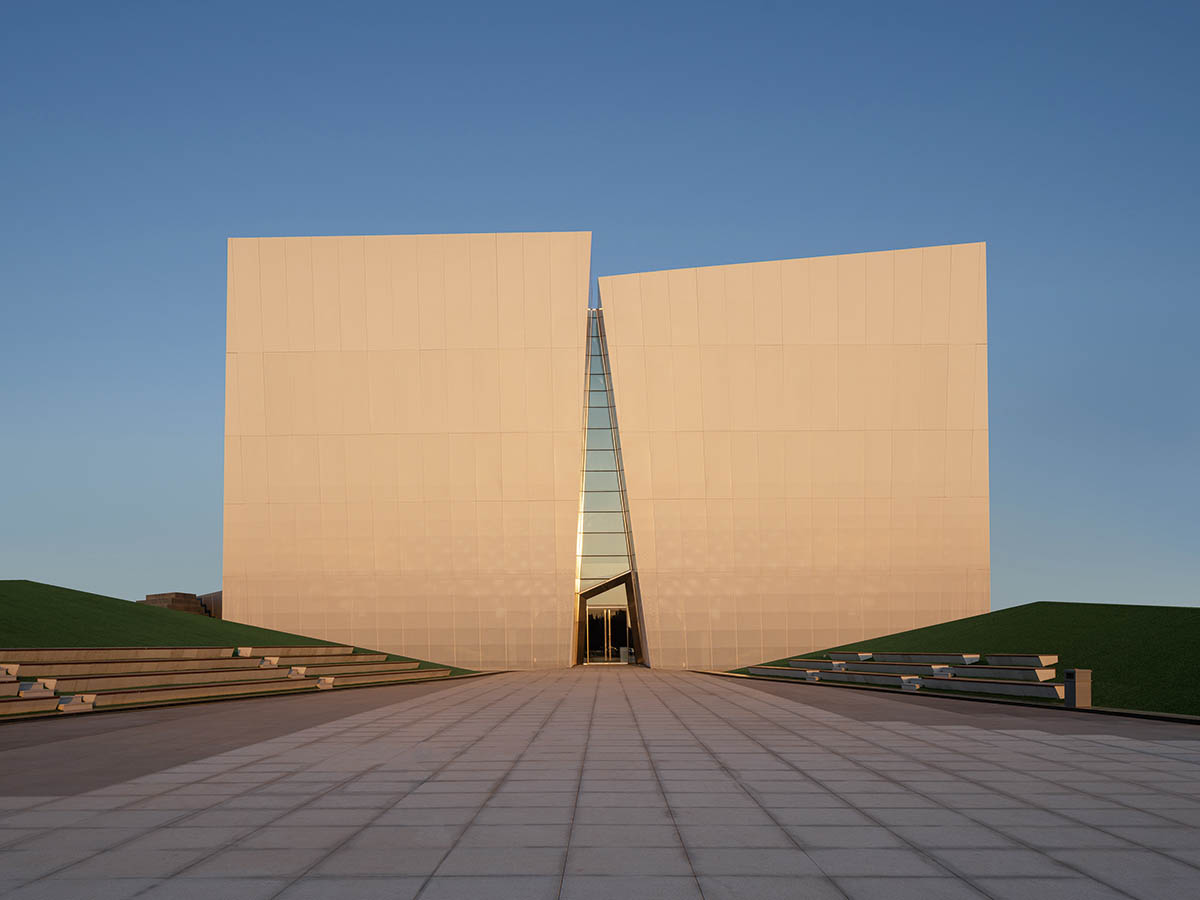 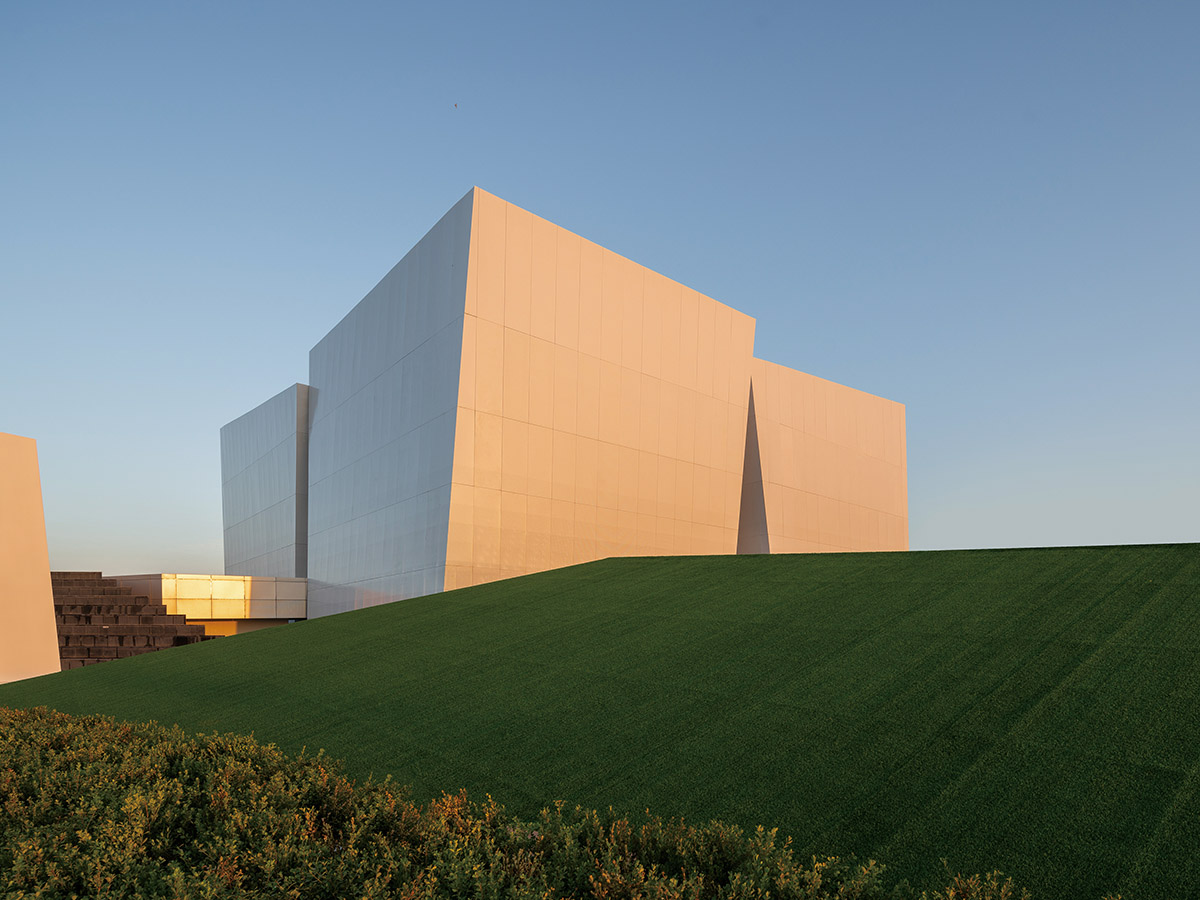 In terms of landscape design, in order to reflect the reputation of Jinan as the City of Springs, a large area of cascading water was set up along the main avenue display area, with the water falling from 4-meter-high stone steps.

The main entrance to the property exhibition hall is set on the second floor, concealed behind the cascading water, and can be reached through a bridge. 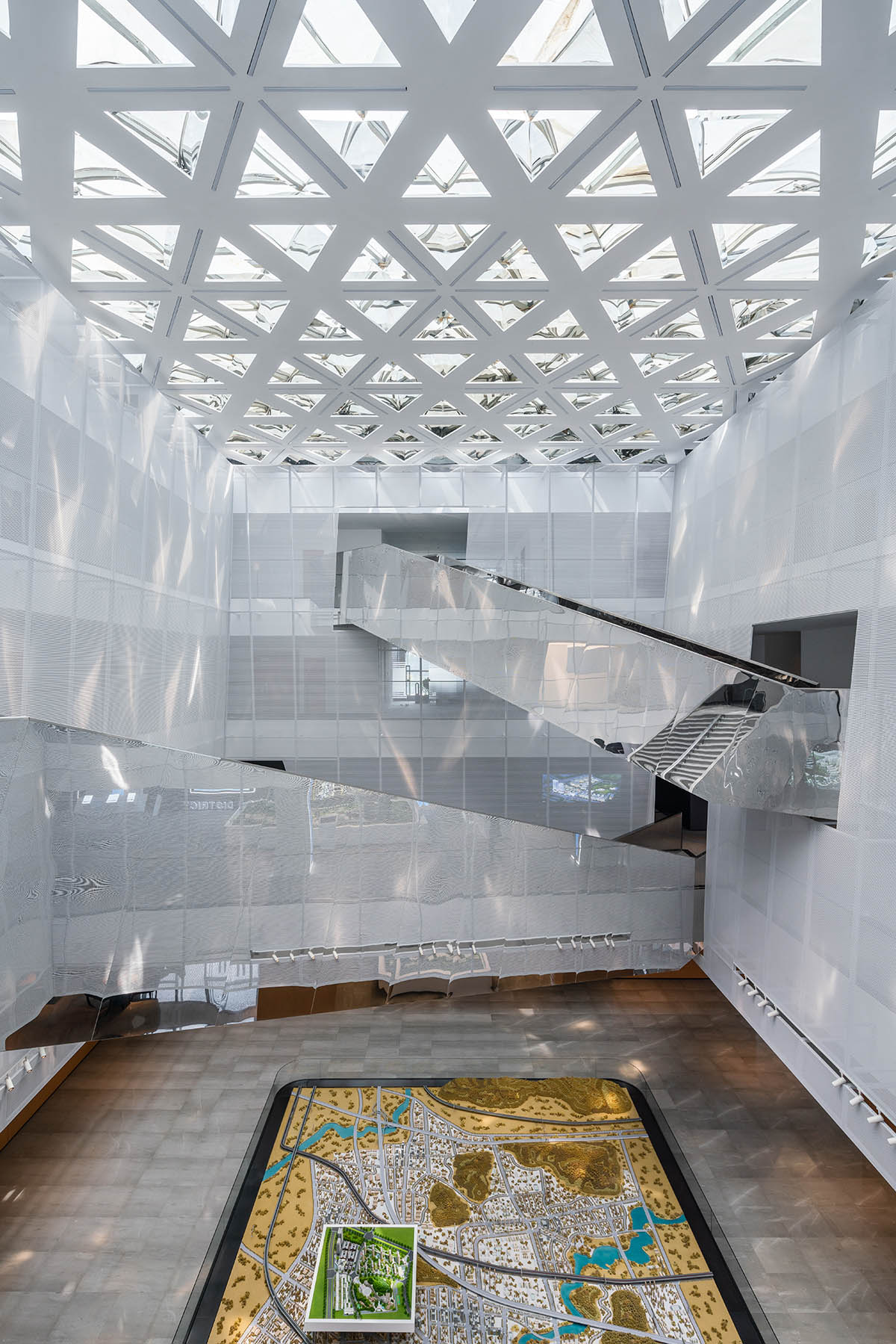 On the connecting bridge, there is cascading water on the outside, and a tranquil pool on the inside centered around a welcoming pine.

One side is in motion and the other side is tranquil, reflecting the mood of the bright moon shining between the pine tree and clear spring water on the stones. Upon entering the building, visitors are drawn from the wilderness into a paradise. 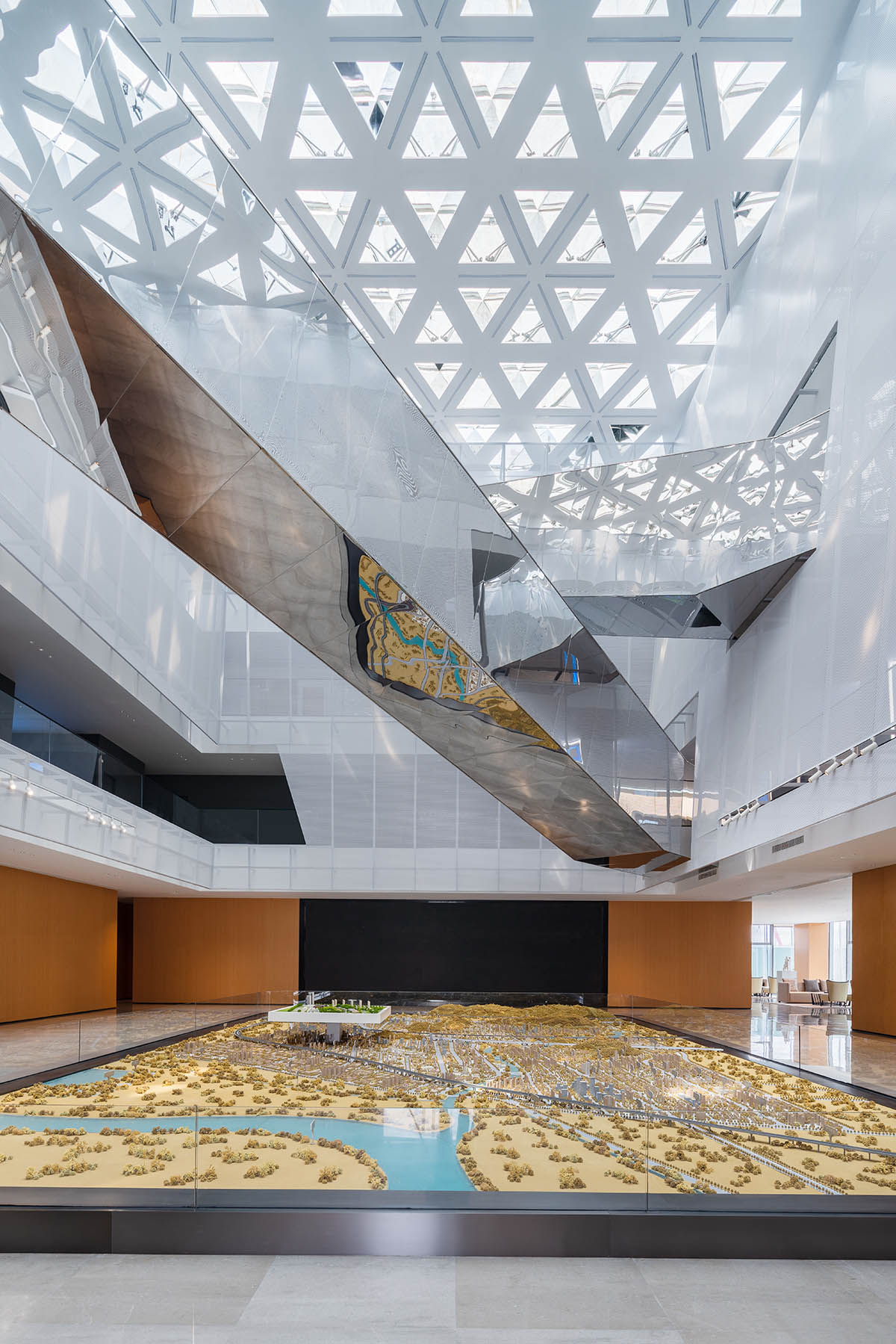 The interior of the building is also a continuation of the exterior, with the perforated plating element of the entrance area extending directly from the exterior to the interior. A large, four-story atrium serves as a sandbox area and becomes the focal point of the entire space. 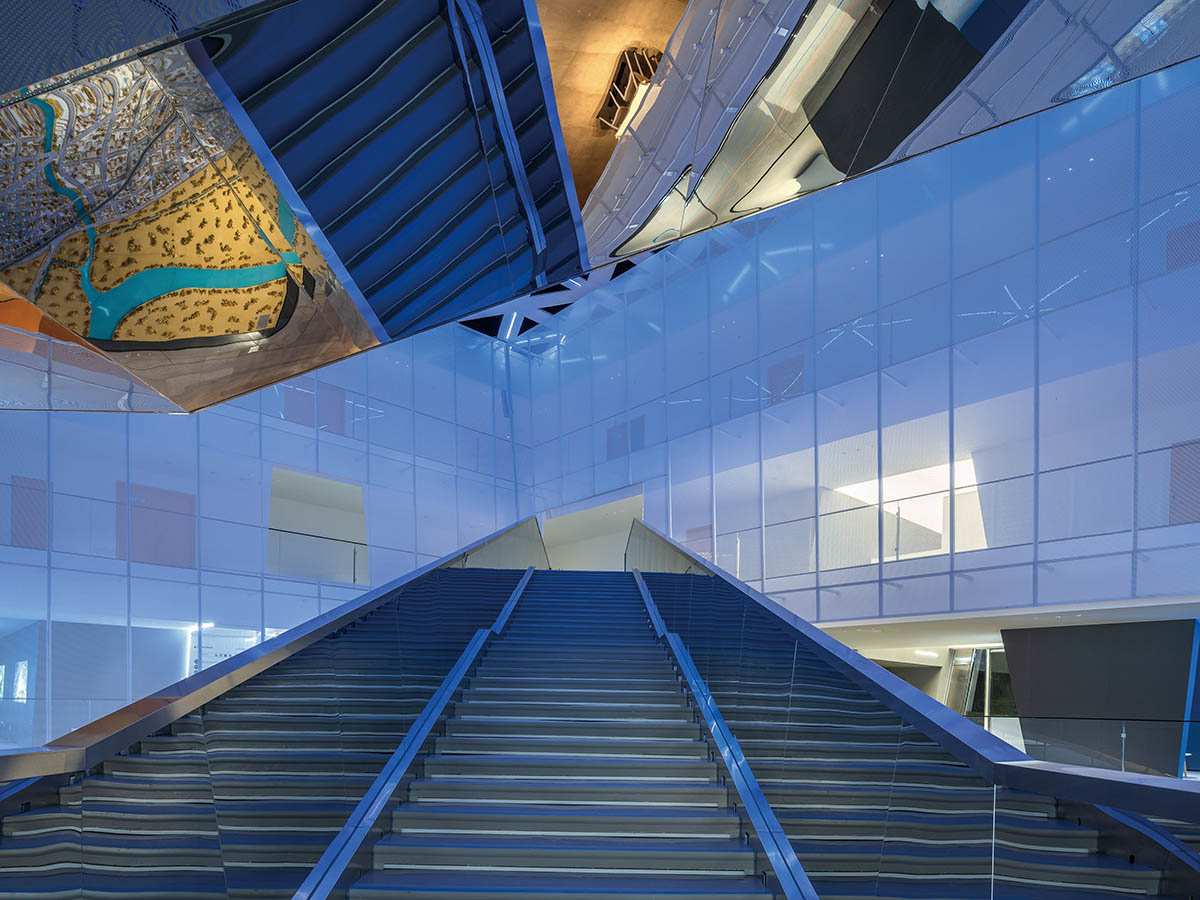 Natural light comes in from the skylight and is surrounded by perforated plates, forming a space imbued with a sense of ritual. Viewing windows are set up on the enclosed perforated plates, allowing the people upstairs to look over the sandbox, while also setting up a contrast that makes the space livelier.

The first floor is the residential sales expo center. The walls of the main entrance and the multi-functional rest area extend the architectural form to the interior, continuing the clean and blocky design.

The four-story-high atrium and the perforated plate material on the facade make the atrium space extremely impressive and awe-inspiring. 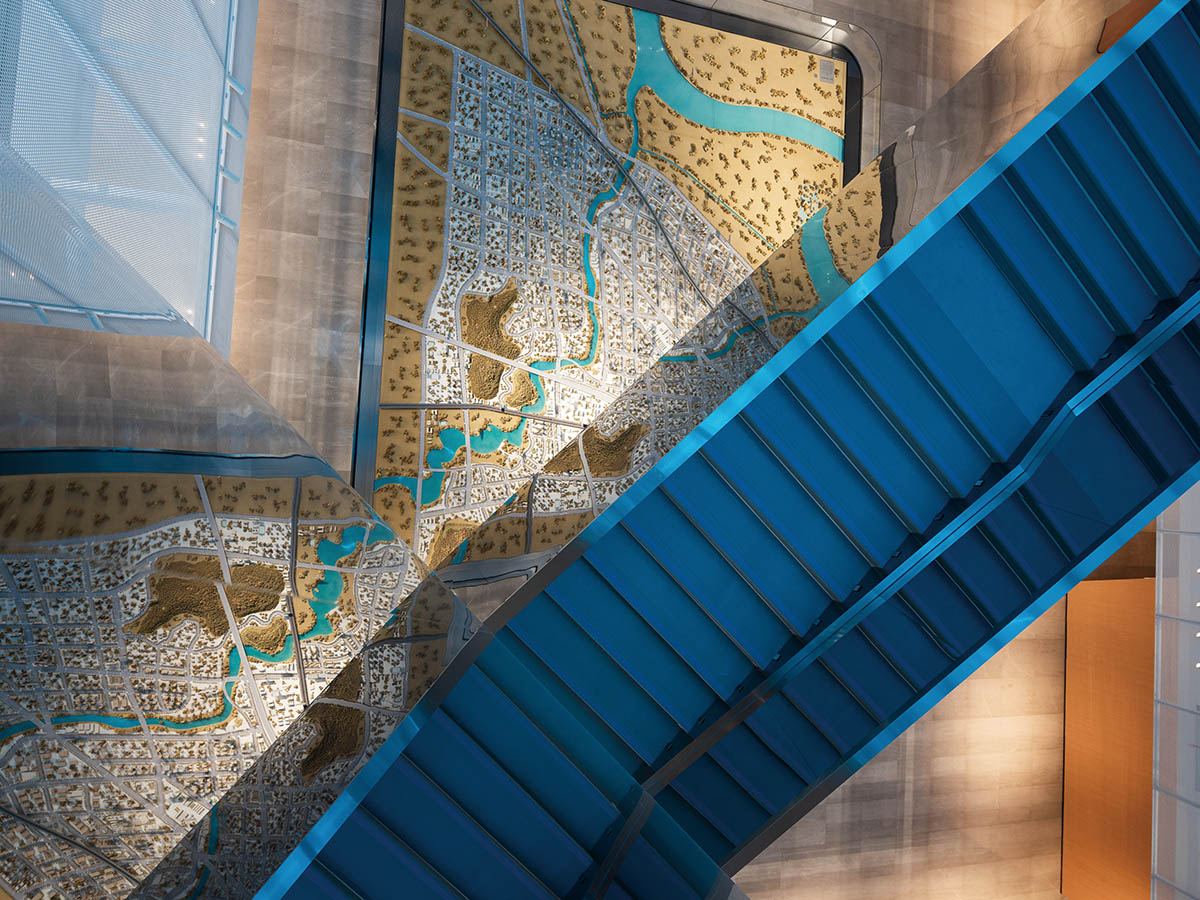 The two connecting bridges above the atrium enliven the space between the different floors, while the mirrored stainless steel skin reflects the entire atrium space as if floating in the air. The viewing windows on the curtain wall allow visitors to overlook the sandbox on the first floor and increase spatial transparency.

The low-set sandbox increases the spatial contrast and the sense of ritual. The design of the atrium has a strong visual impact on people, like a box suspended in the air. 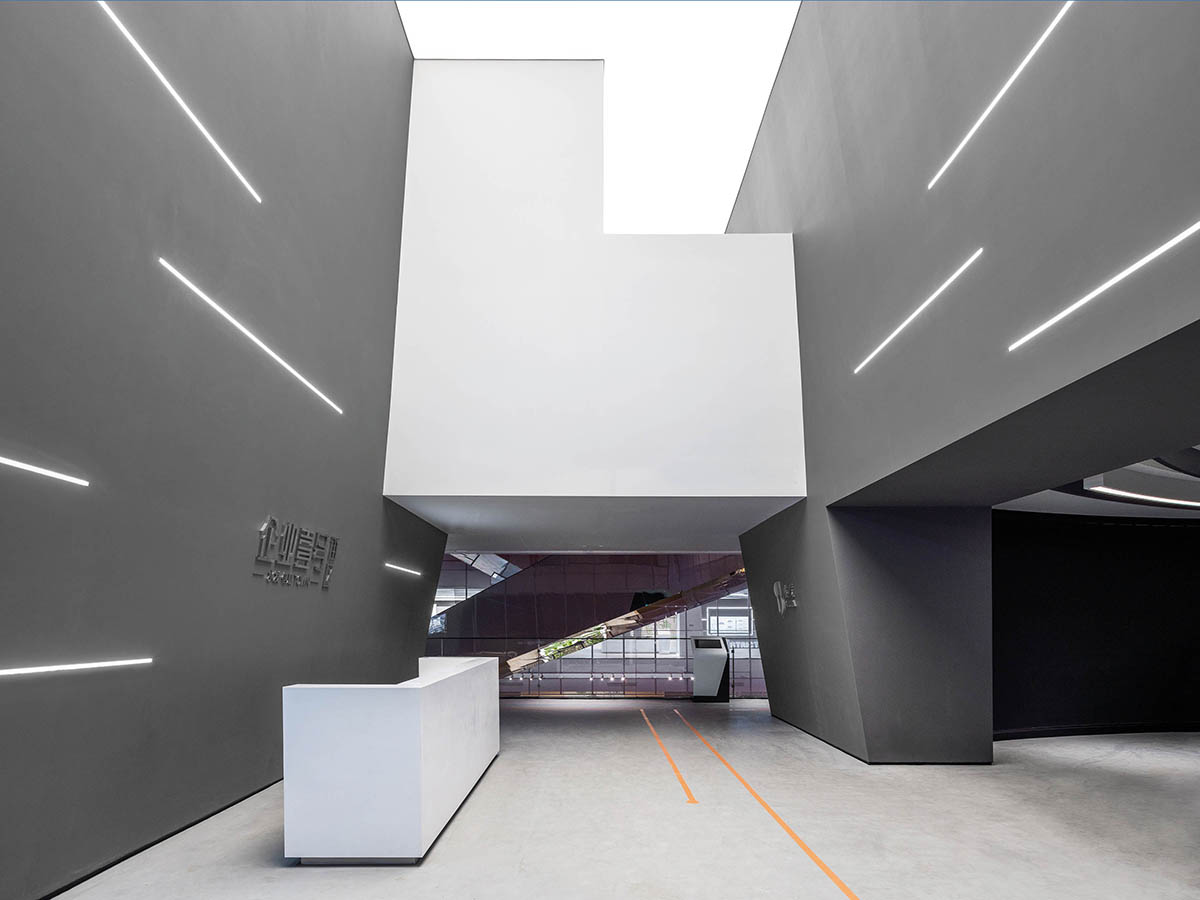 The second floor is the property exhibition hall. The interior facade uses the shape of the building to extend the exterior form of the building entrance to the interior. The contour is designed according to the outline of the entire building. The entire wall presents an origami-like form, with a consistent architectural theme.

The “stone block” intent is embodied throughout the exhibition hall, connecting the reception area at the entrance to the various exhibition spaces on the same level, while the folding of the wall creates a wide range of spatial variety. 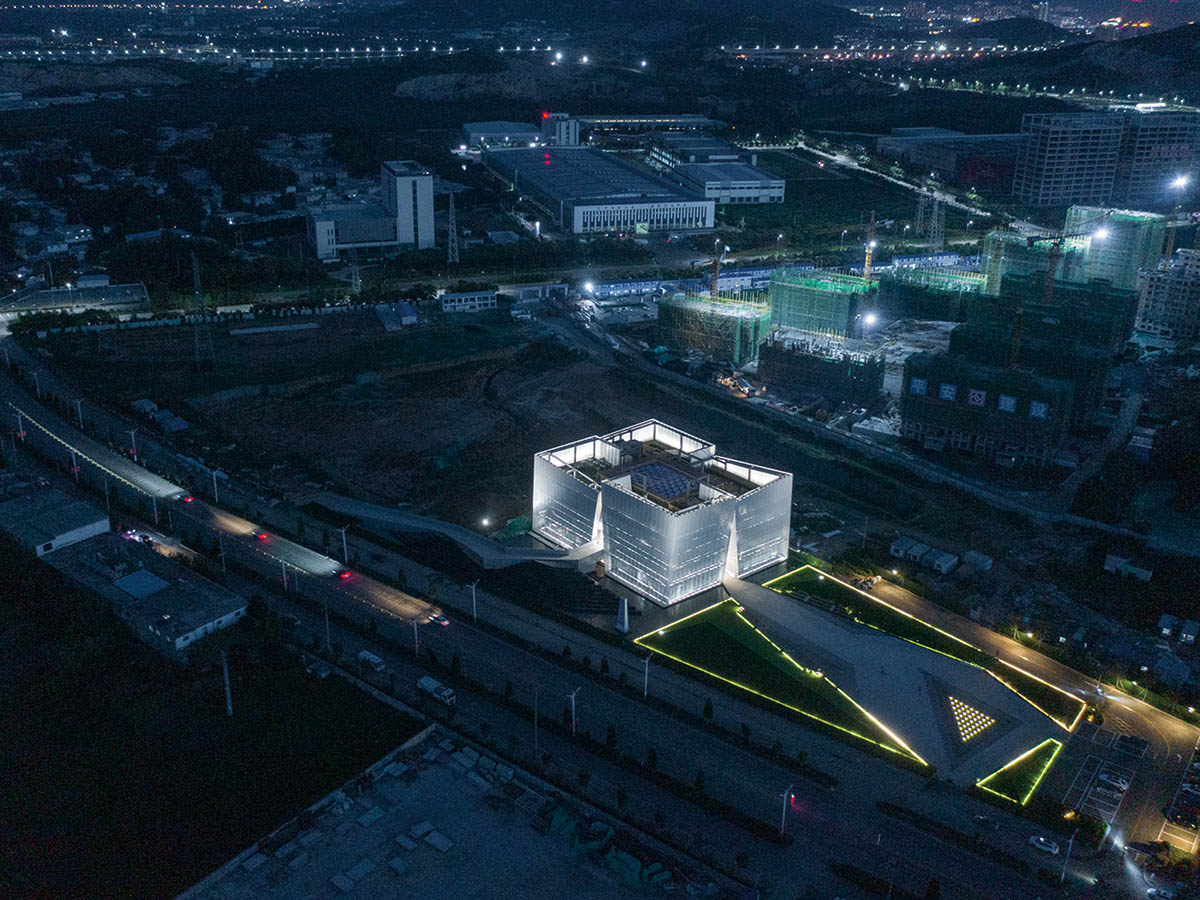 The integrated design of architecture, view, and interior enable the entire project to be consistent with the design concept.

While isolated from the surrounding environment, it also becomes the focal point of the entire area, satisfying the display requirements as an exhibition center and sales office, bringing new opportunities for the development of this region. 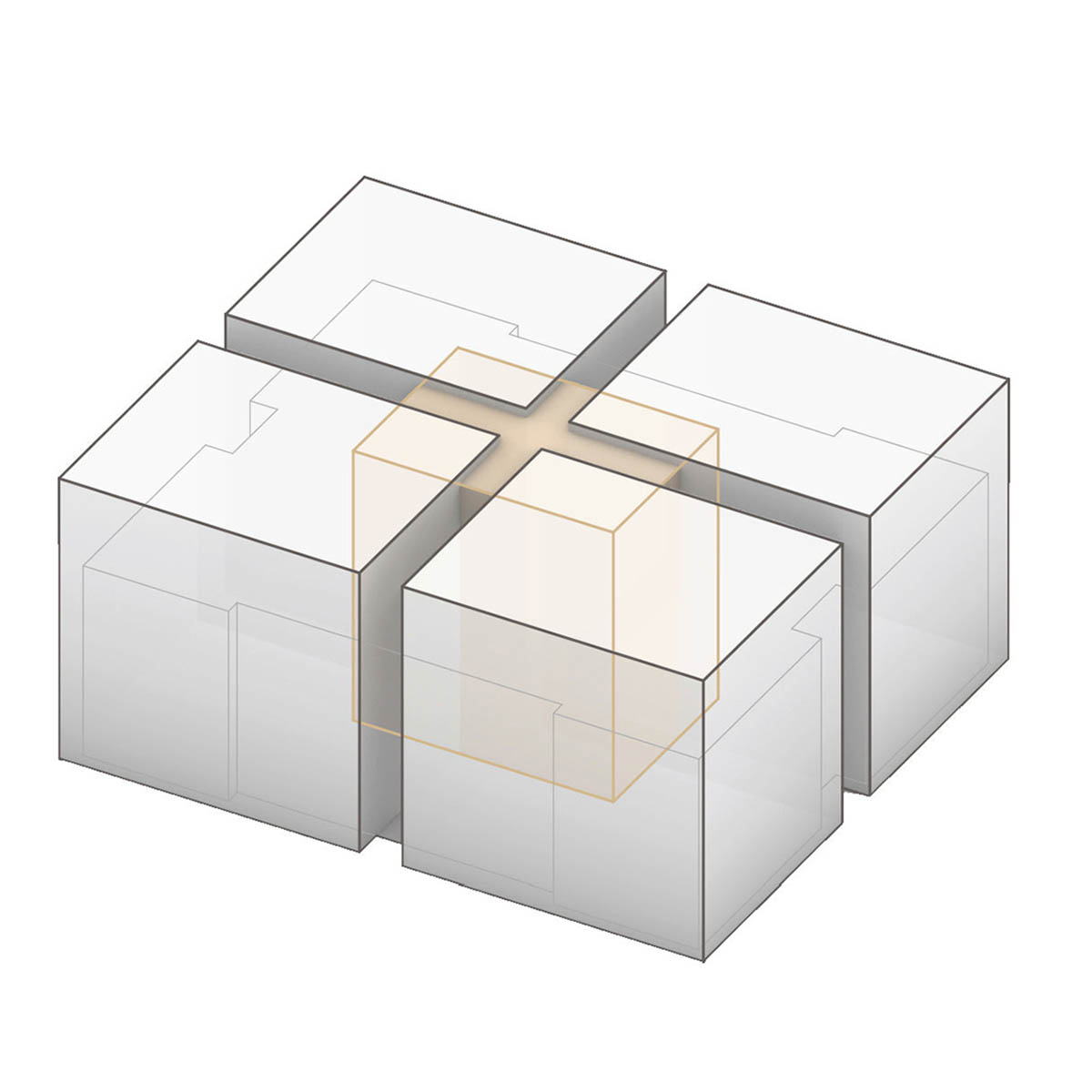 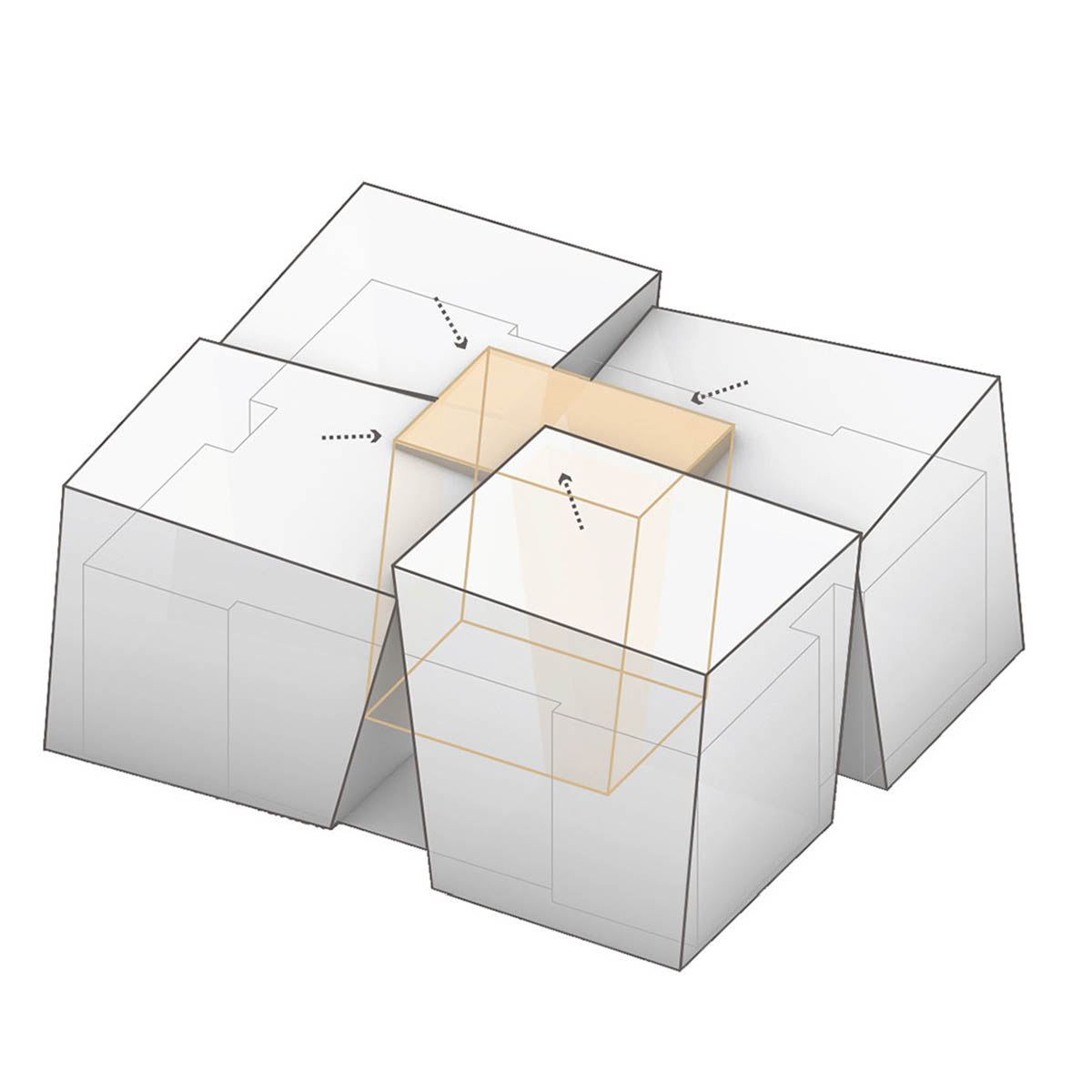 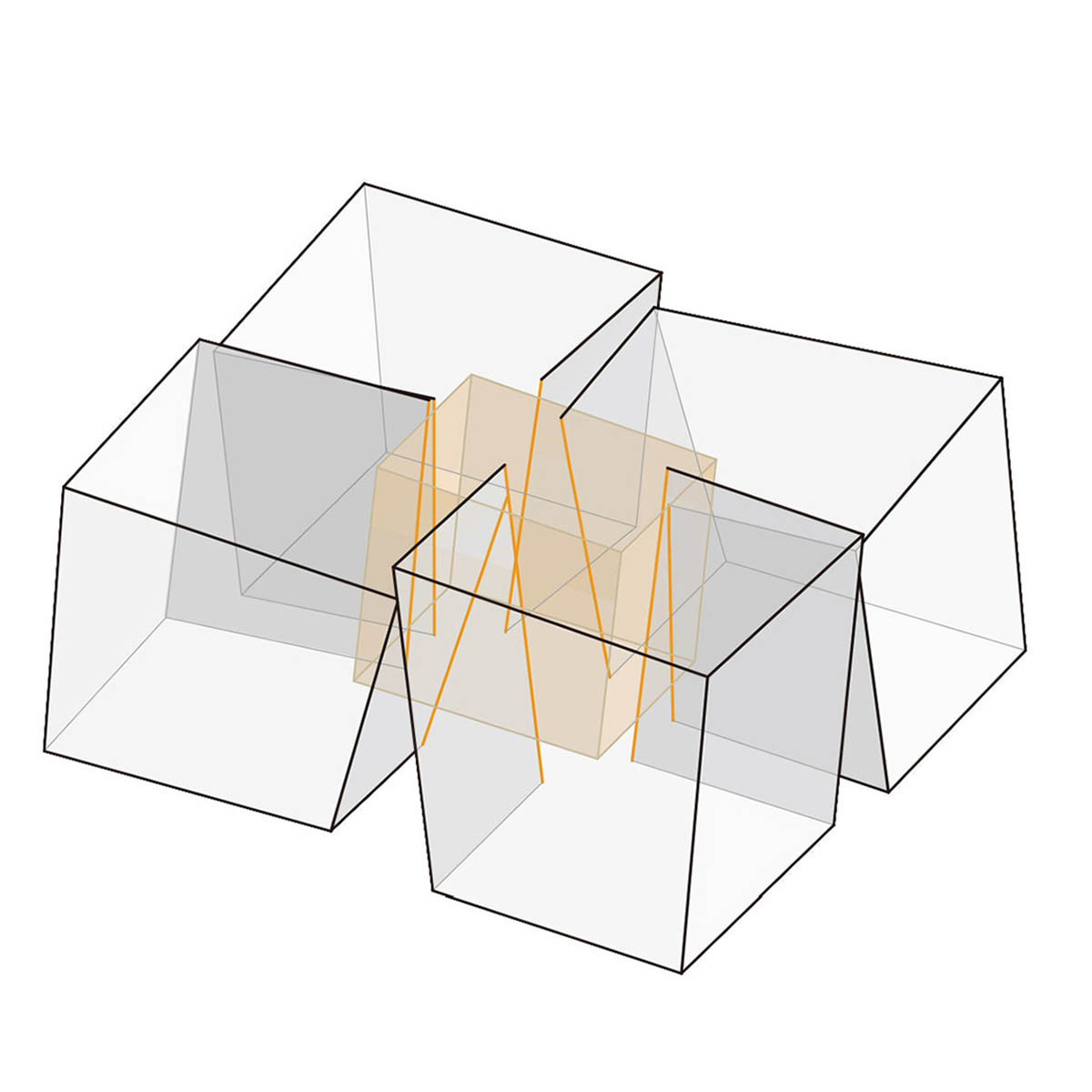 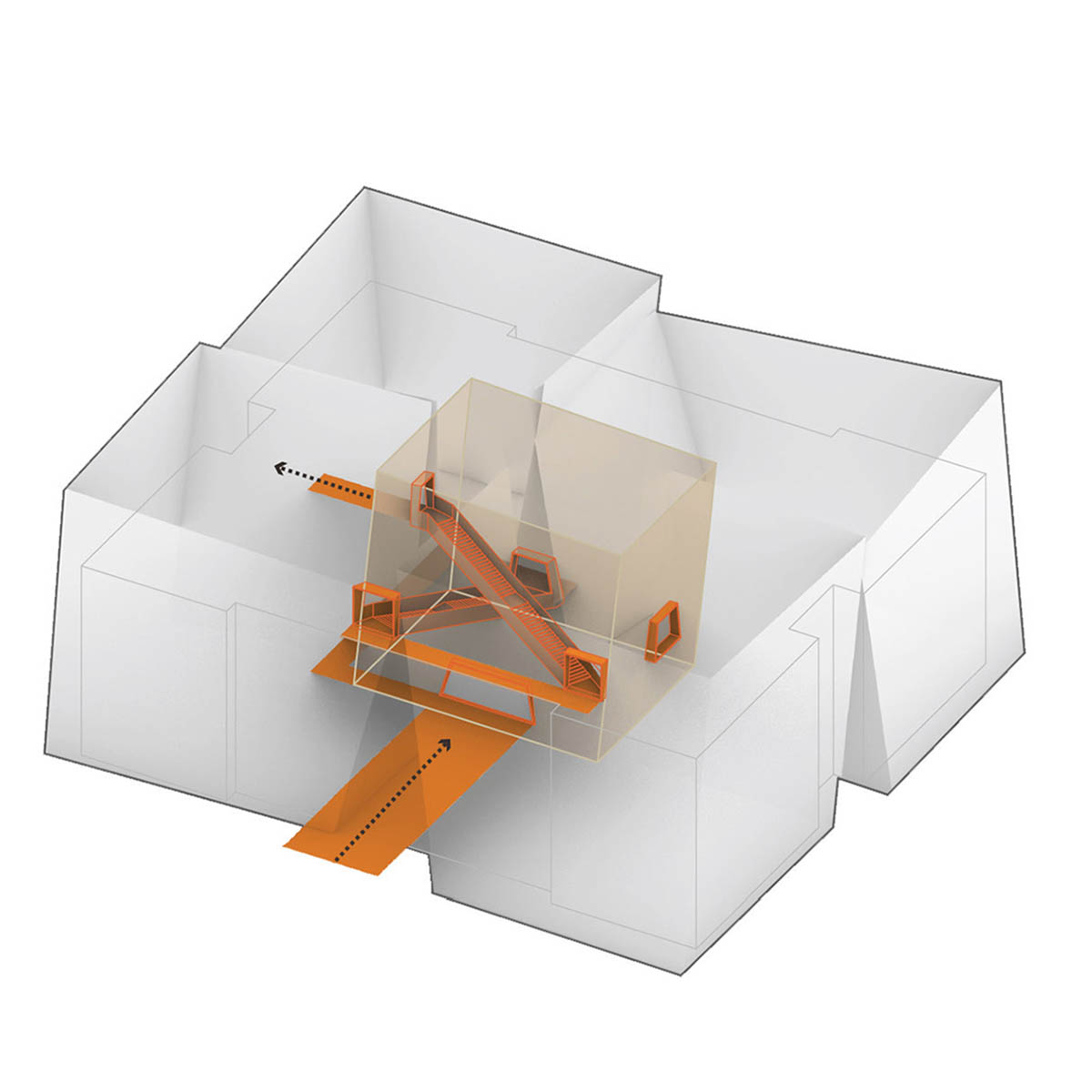