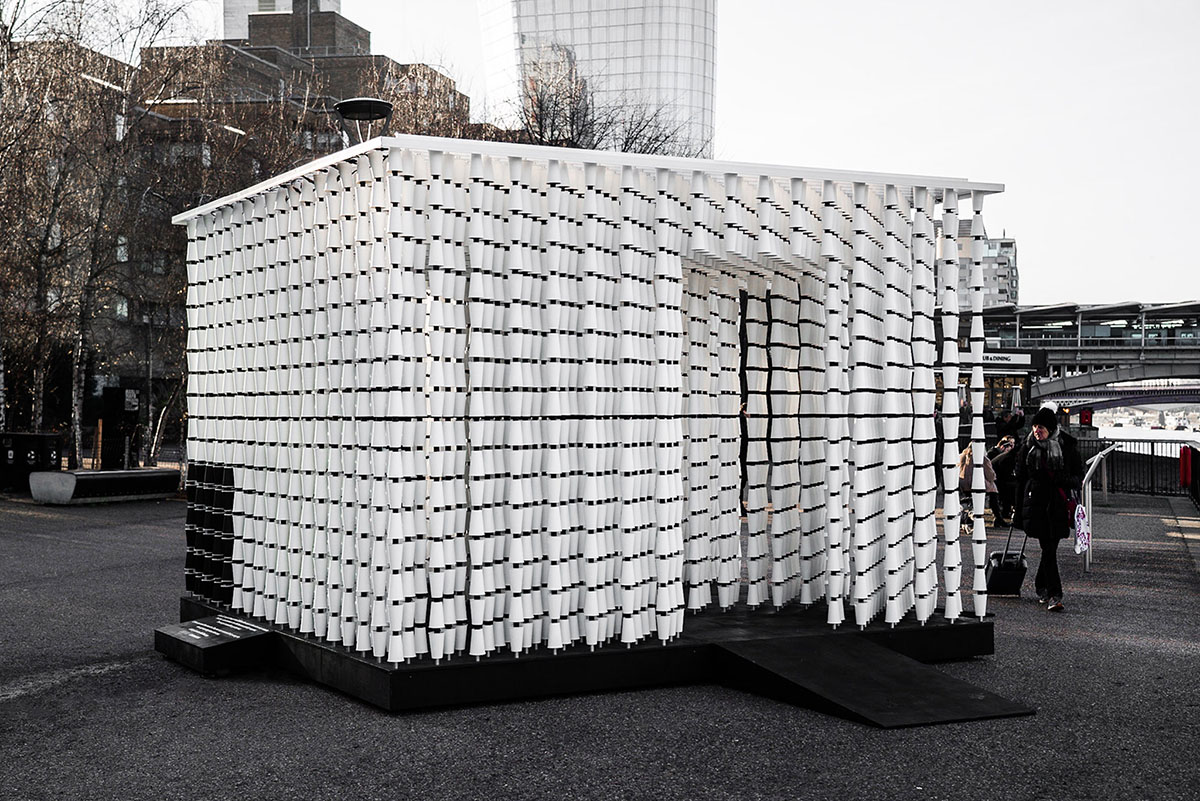 The installation was situated at the Tate Modern and was open to the public for two weeks in January 2020.

However during the pre-covid period, the designers and the organization planned to travel the installation nationwide, but for now the installation is being stored neatly in its custom crate waiting to find out if it will live again. 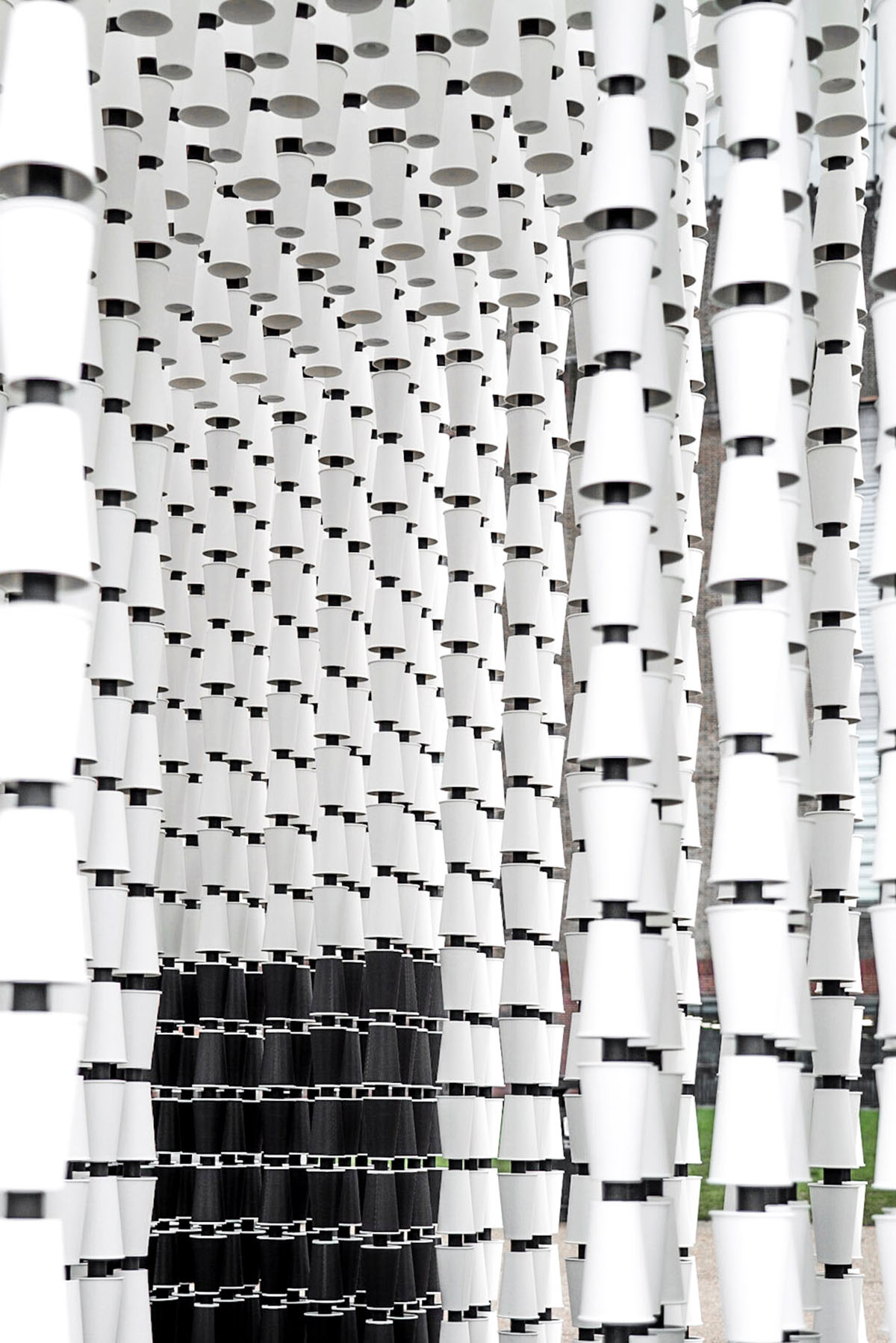 For this reason, Mule Studio has released the images and video for the first time now, they have not been seen previous to this.

Hubbub explores innovative ways to share information around important sustainability issues. The issue in focus in this case is the 3 billion paper cups which are thrown away each year in the United Kingdom with only 4 per cent being recycled. 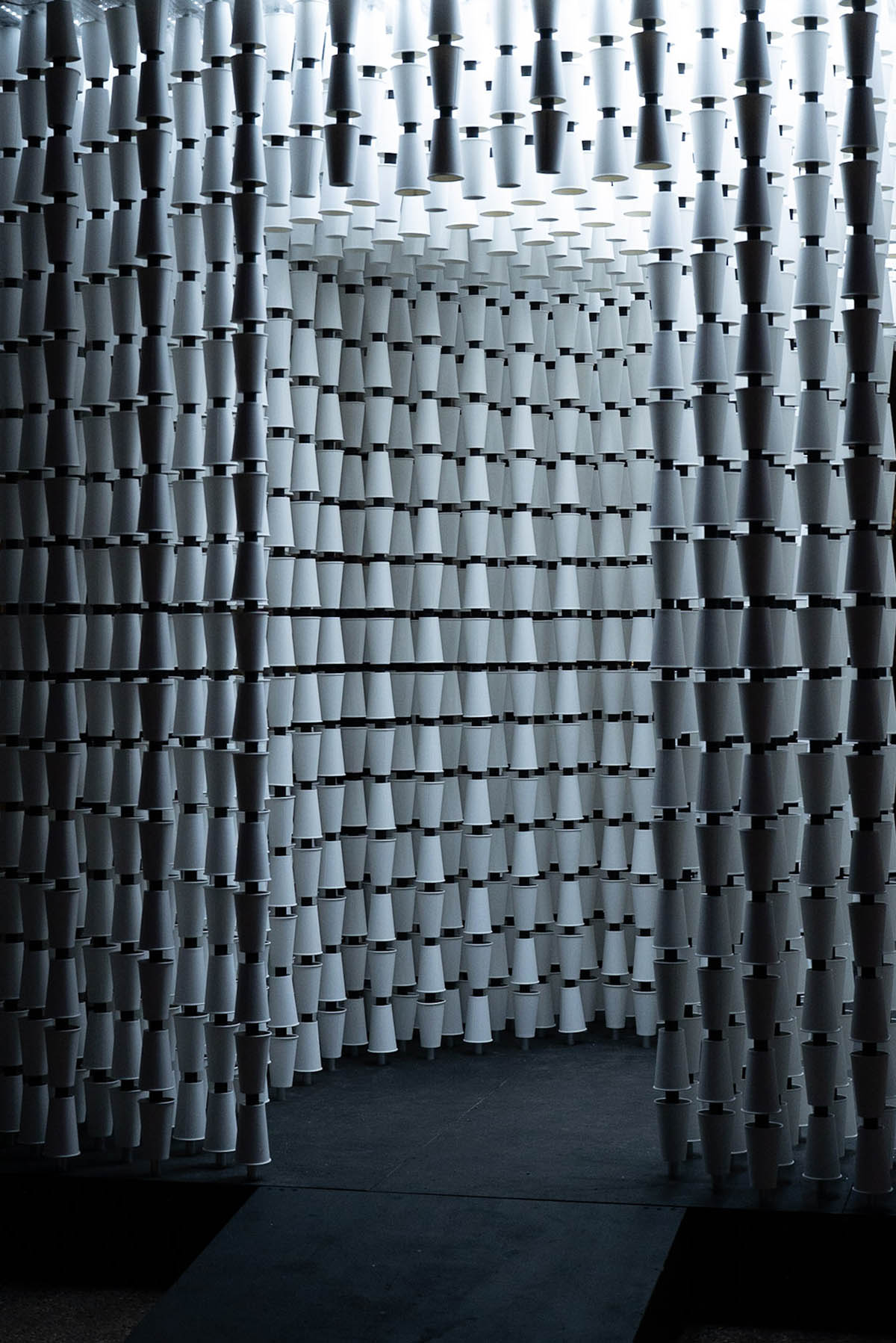 As the designers highlight, the project brief called for a visually striking, bold installation which is fun and engaging while creating minimal waste, raising awareness around the launch of The Cup Fund, a charity placing specialist coffee cup recycling bins across London and the United Kingdom.

Paper coffee cups are made with a layer of plastic film which means they cannot be recycled in the common recycling units. 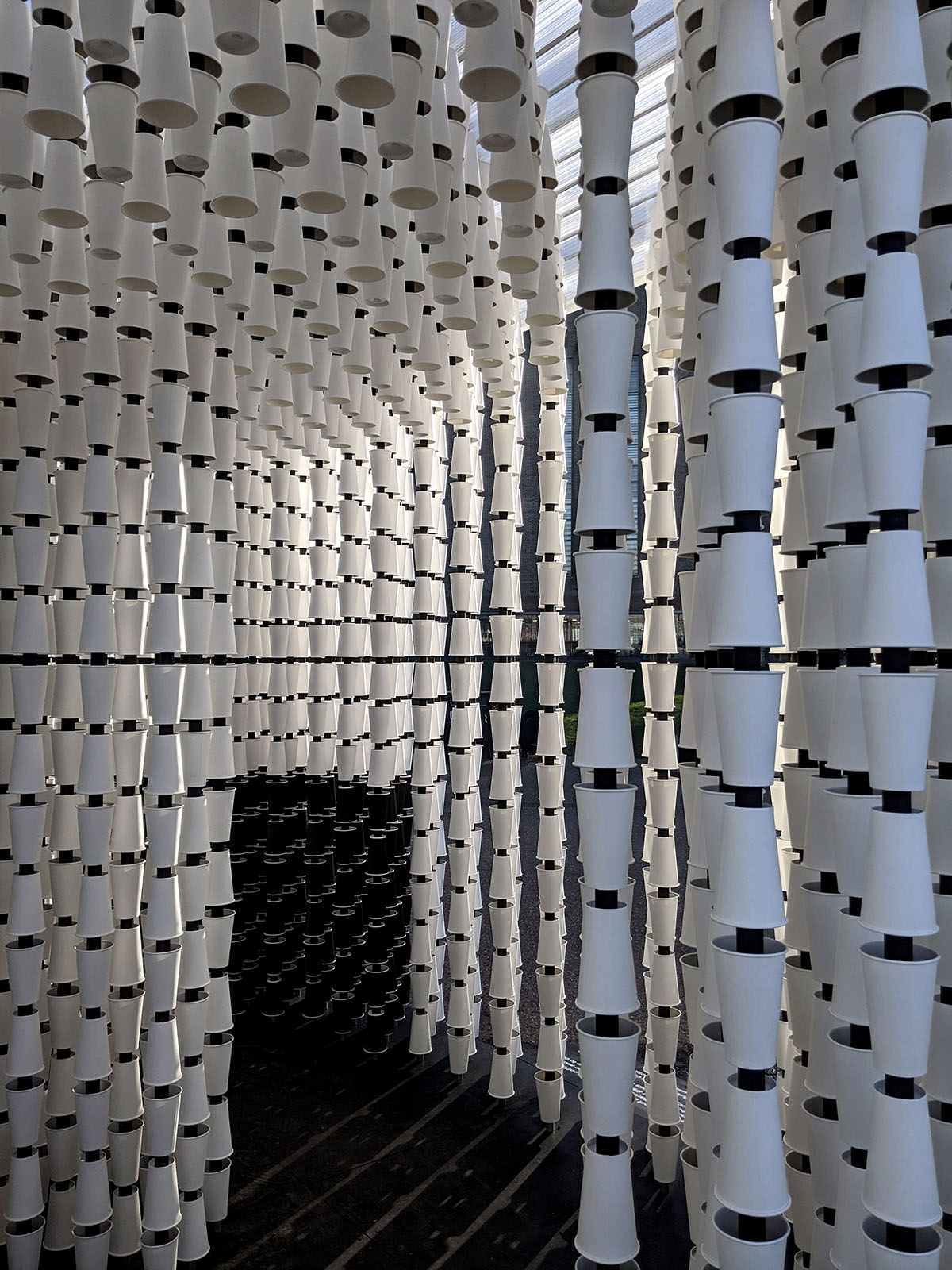 "We chose to represent the number of cups thrown away every minute in the UK - 5,555 - as the starting point for the design," said Mule Studio.

"We felt a spatial experience for the public to move through and understand the material weight and volume of this otherwise relatively abstract number, would be engaging and hold a tactile and spatial memory." 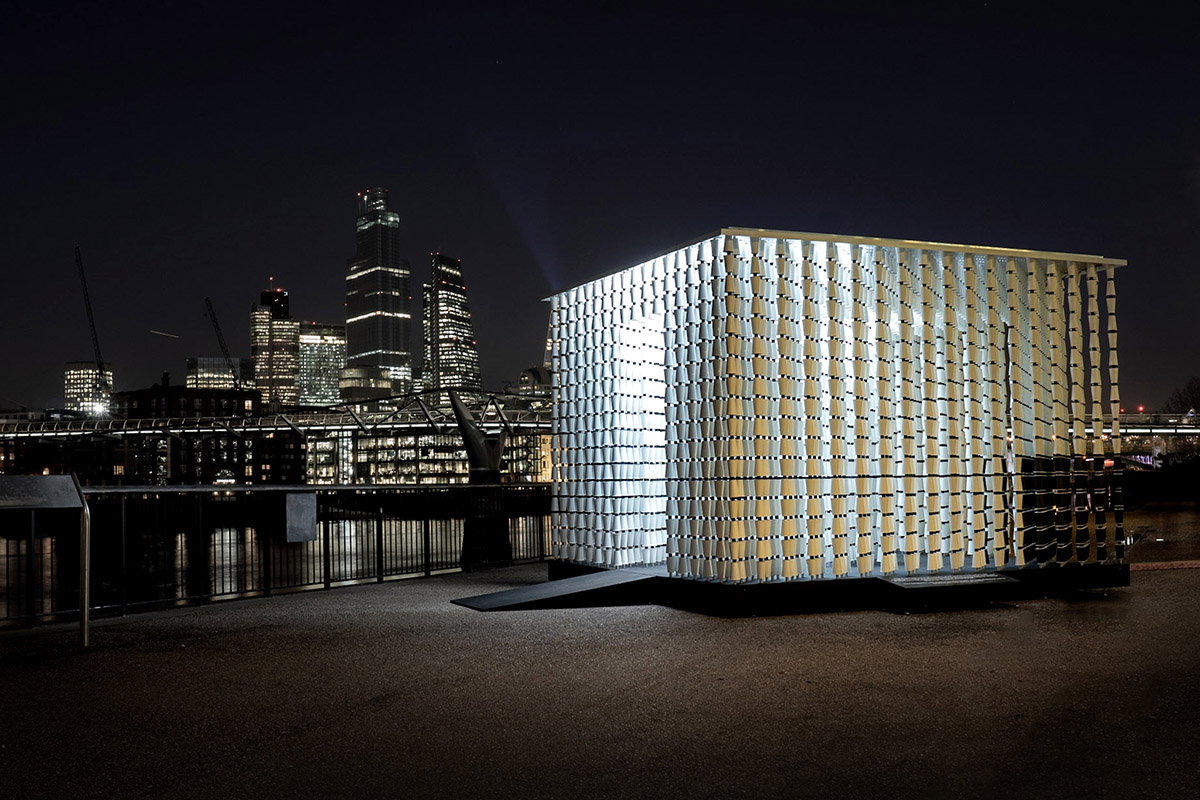 The installation lit up in the evening, echoing the movement of a person walking through the space thereby encouraging people to enter the installation and interact with it. 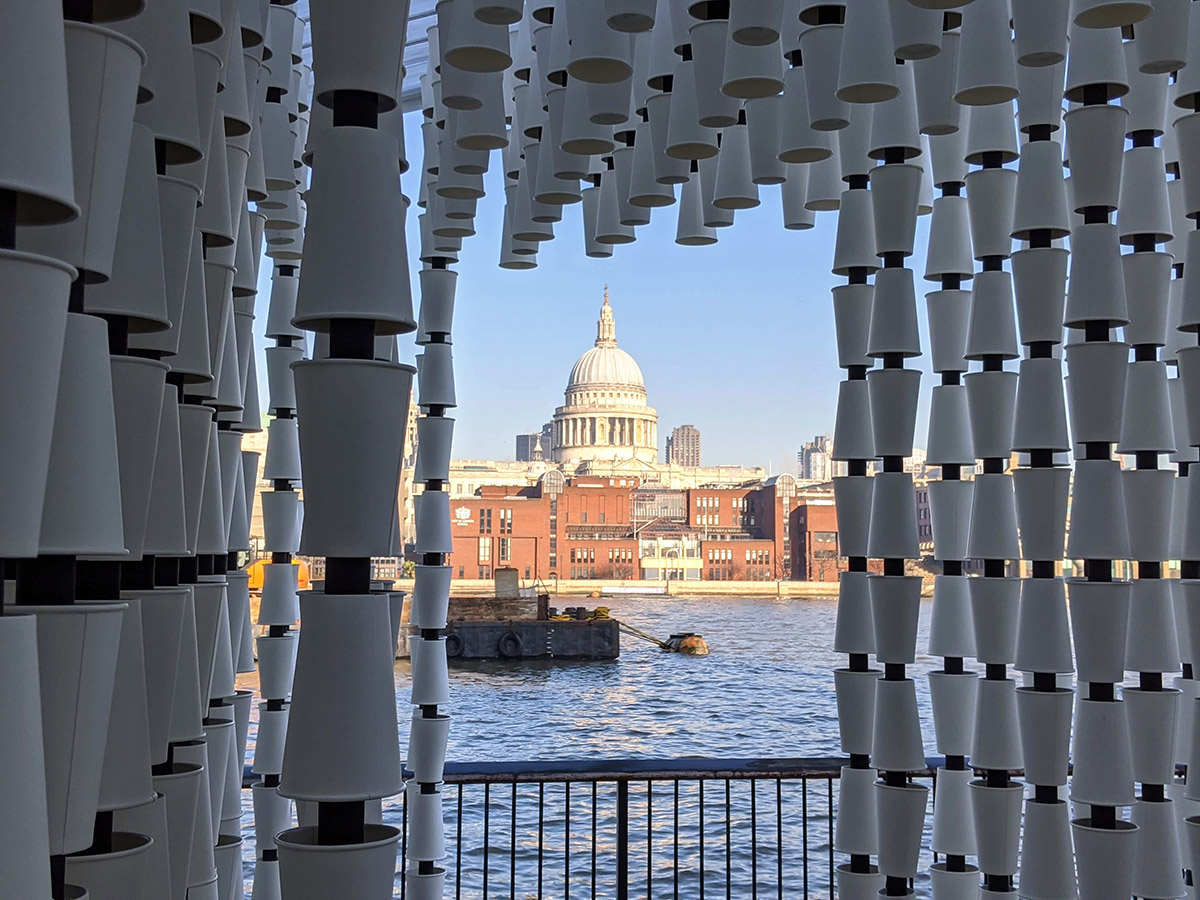 The studio wrote a custom software to make bespoke lighting animations for the LED-embedded roof.

London-based arts and design practice Kai Labs worked on the project with its lighting infrastructure and worked closely with Mule Studio to create the lighting elements. 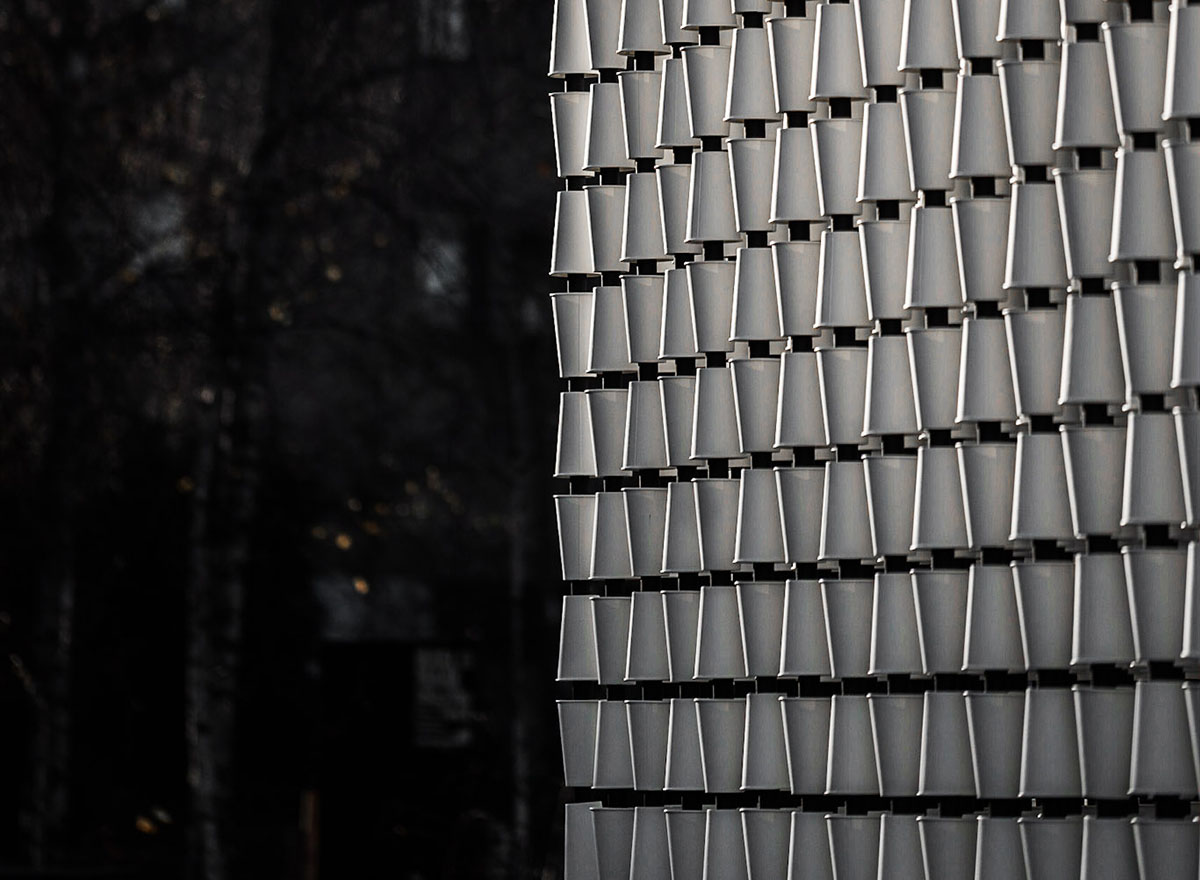 Repetition was a key part of the making and development process - incremental changes have a large impact when working with 5,555 units, according to the designers.

"We enjoyed designing fast and simple production processes, even for basic tasks such as making holes in the base of the cup," they added. 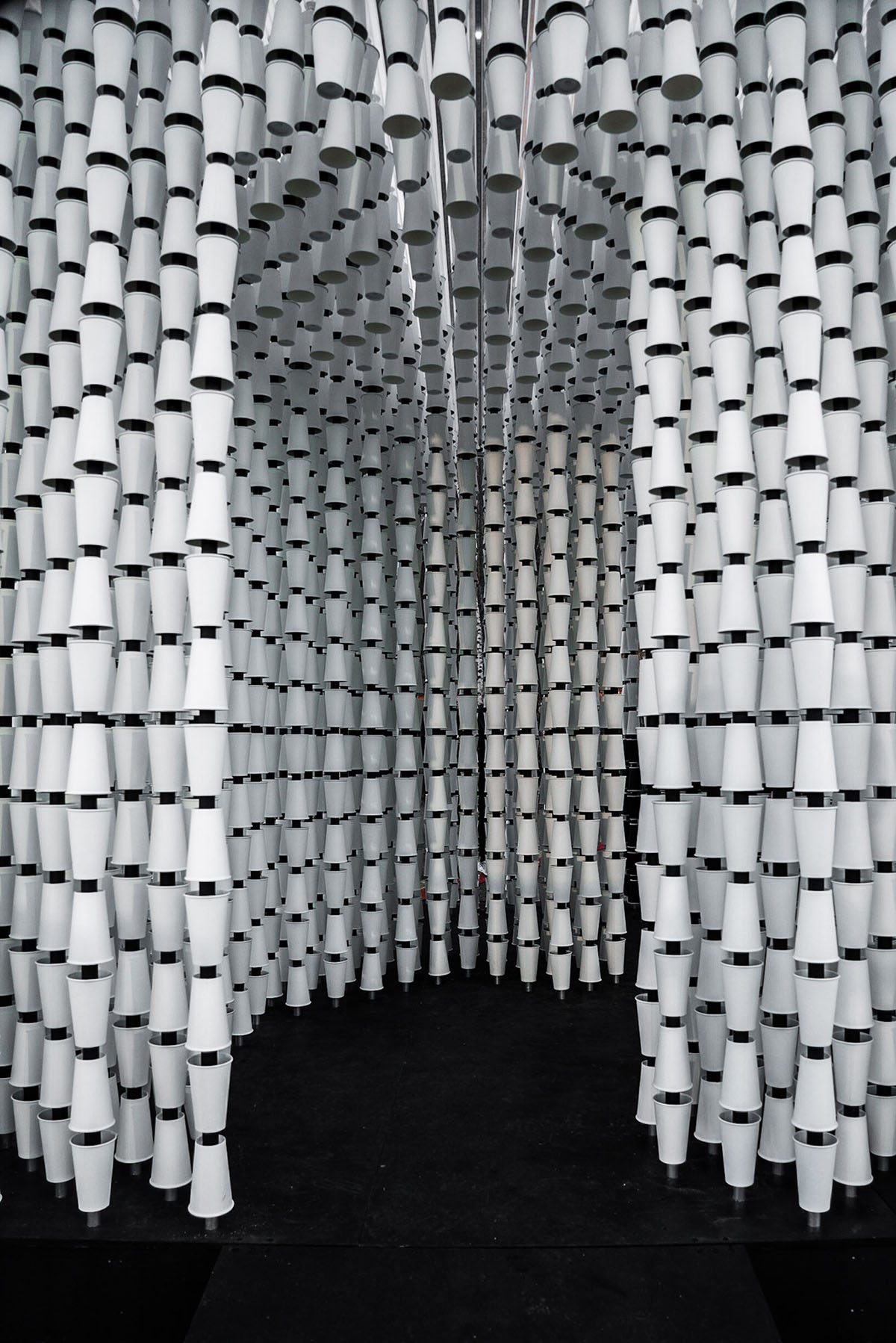 After the installation was taken down, all of the cups were recycled into new homeware products. The remaining materials, such as the aluminium poles and plywood bases, were recycled. 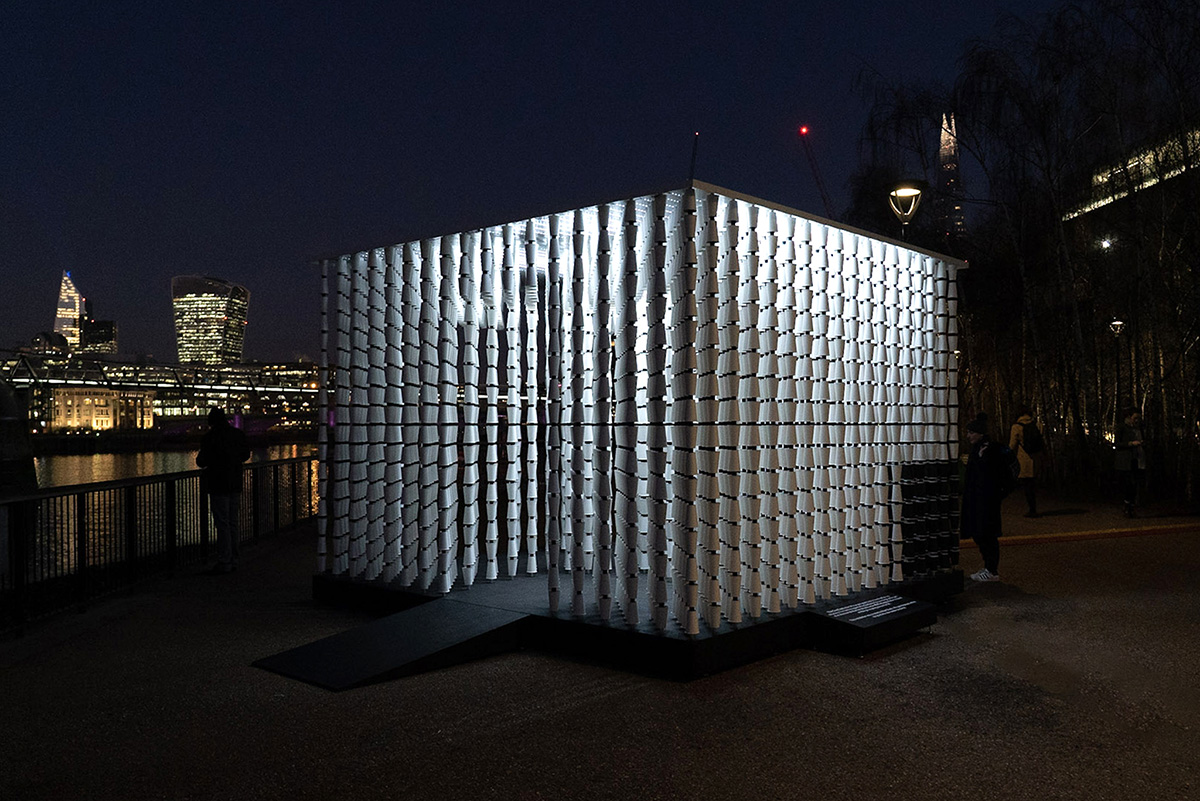 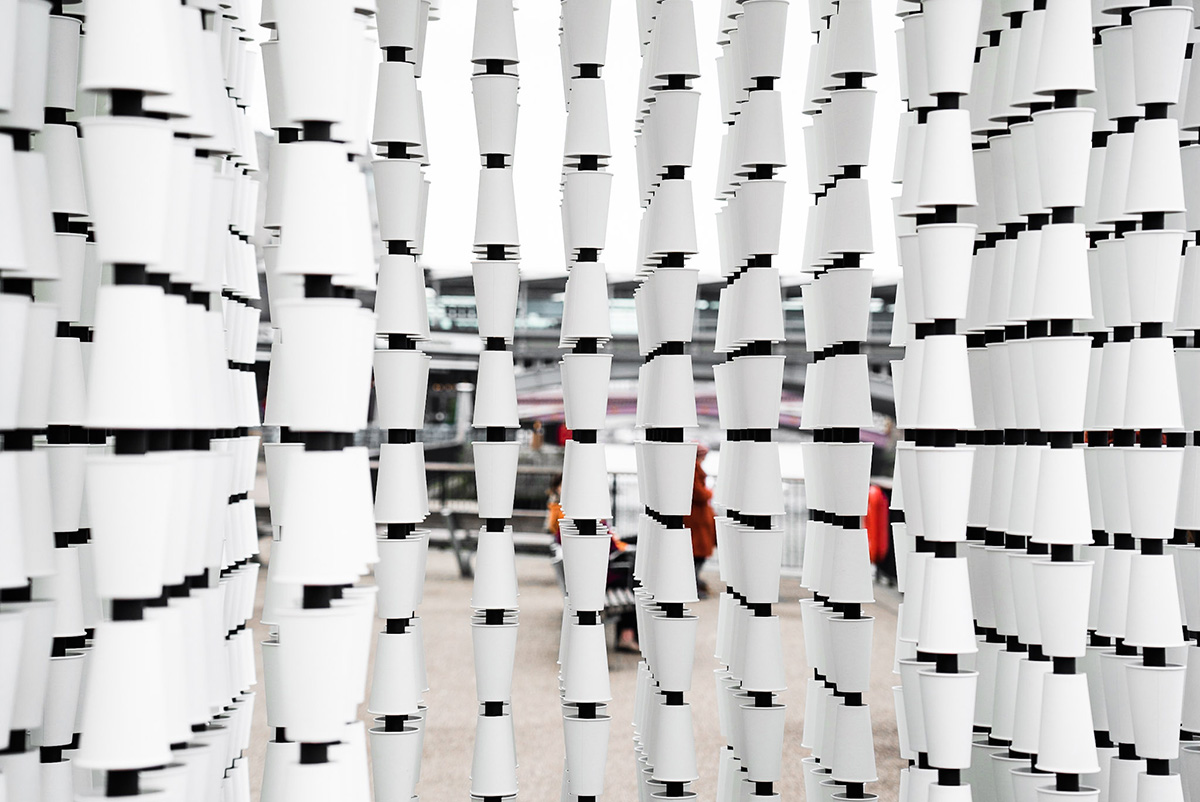 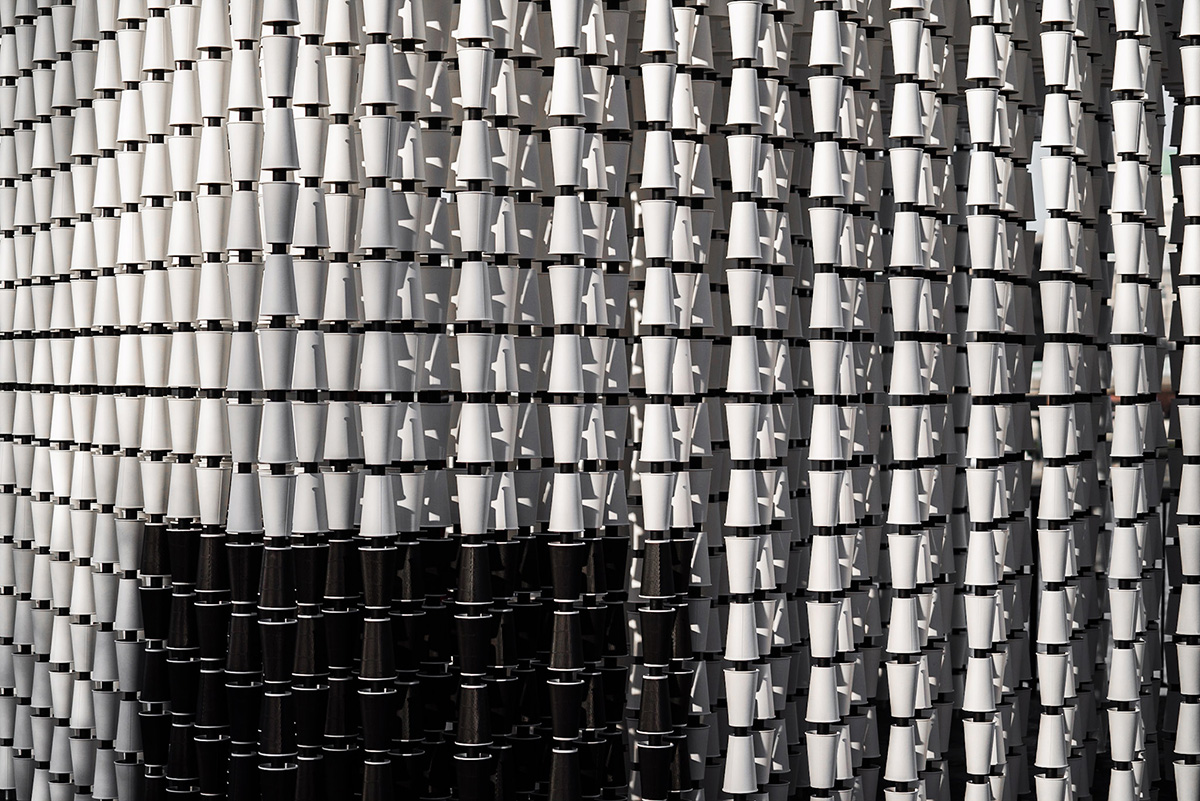 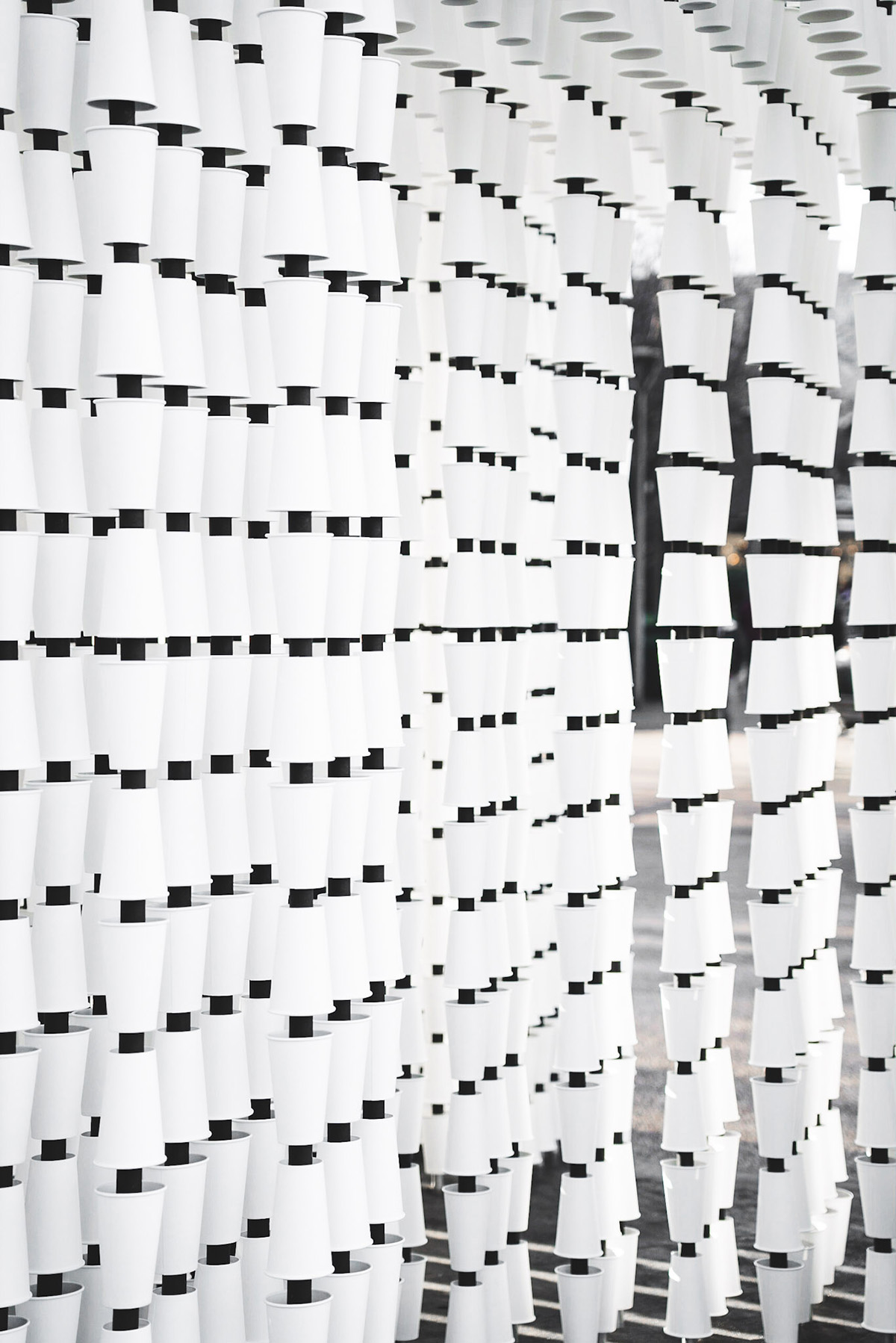 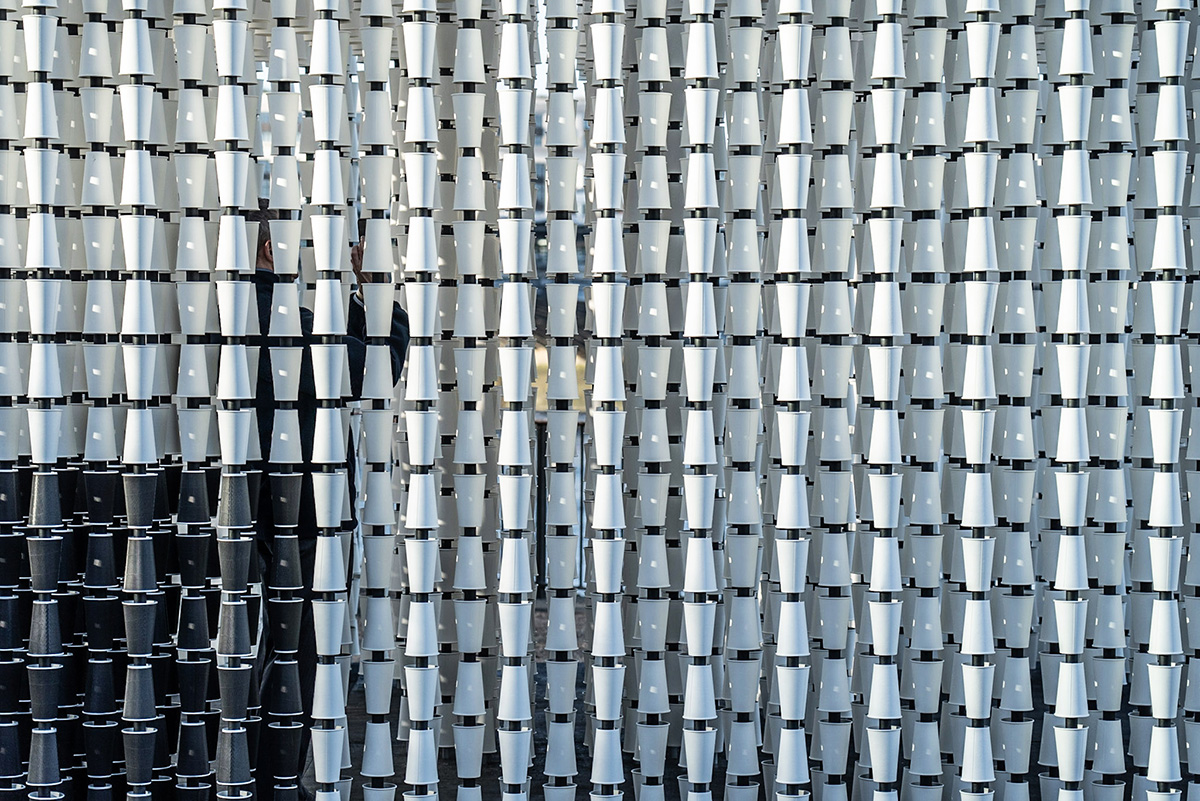 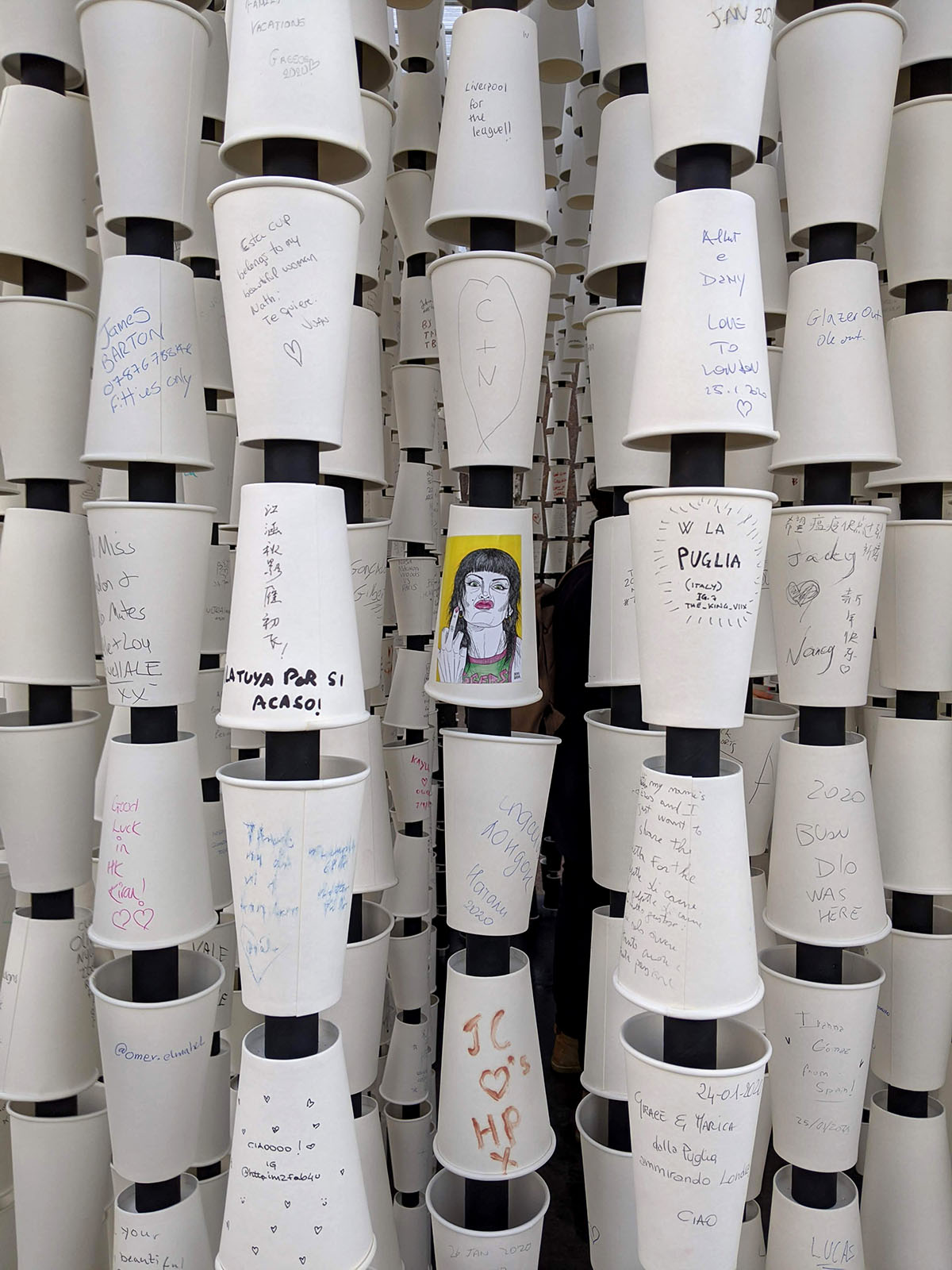 Mule Studio a multi-disciplinary design studio working across a range of scales; from hand-made minimalist wristwatches to computational design engineering of some of the biggest timber structures on the planet.

The studio consist of 3 teams - industrial design, spatial design, and computational design - which inform each other and produce projects interdependently.