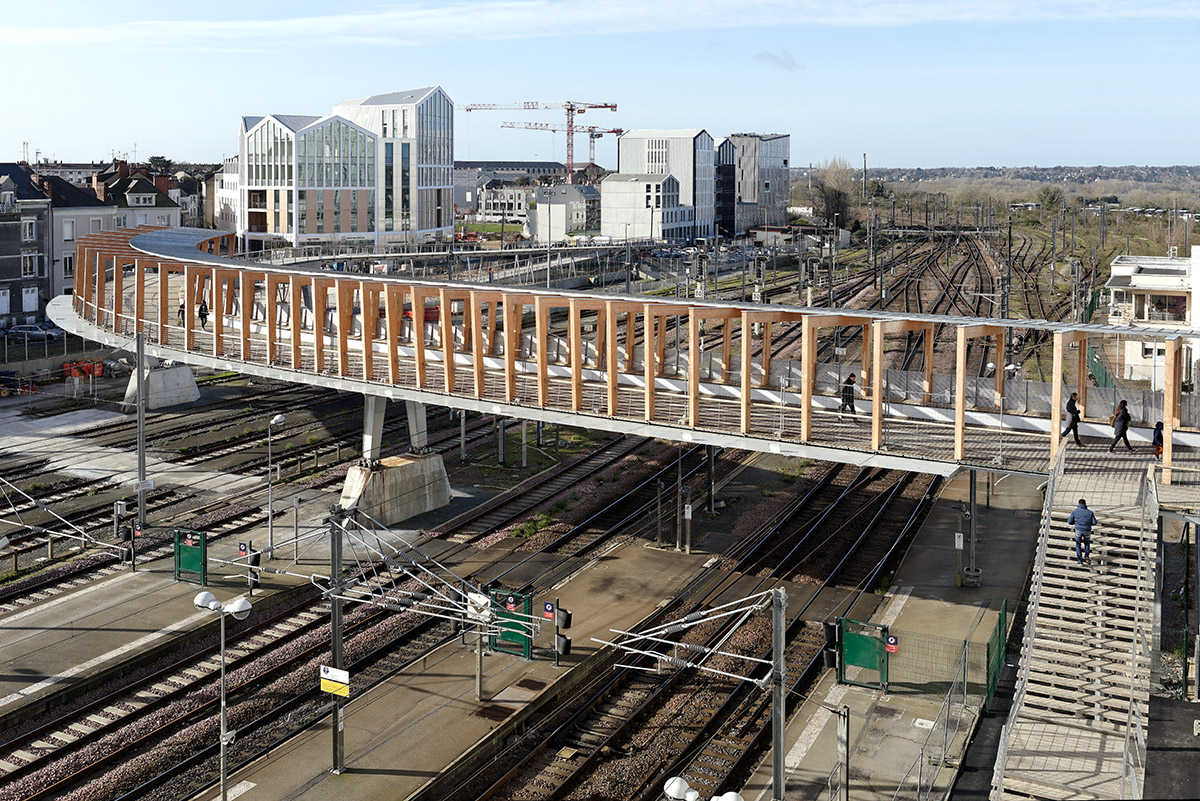 France and Austria-based architecture studio Dietmar Feichtinger Architectes has built a curvy bridge that is made of laminated wood beams to support the roof and lighting. The use of wood beams directs the eye and ennobles the bridge into a new landmark.

Located in Angers, France, the bridge was designed for pedestrians and cyclists at the Angers Saint-Laud train station, it passes over railway tracks.

The new bridge was replaced with the old reinforced concrete pedestrian bridge, which crossed directly over the tracks, was badly damaged. 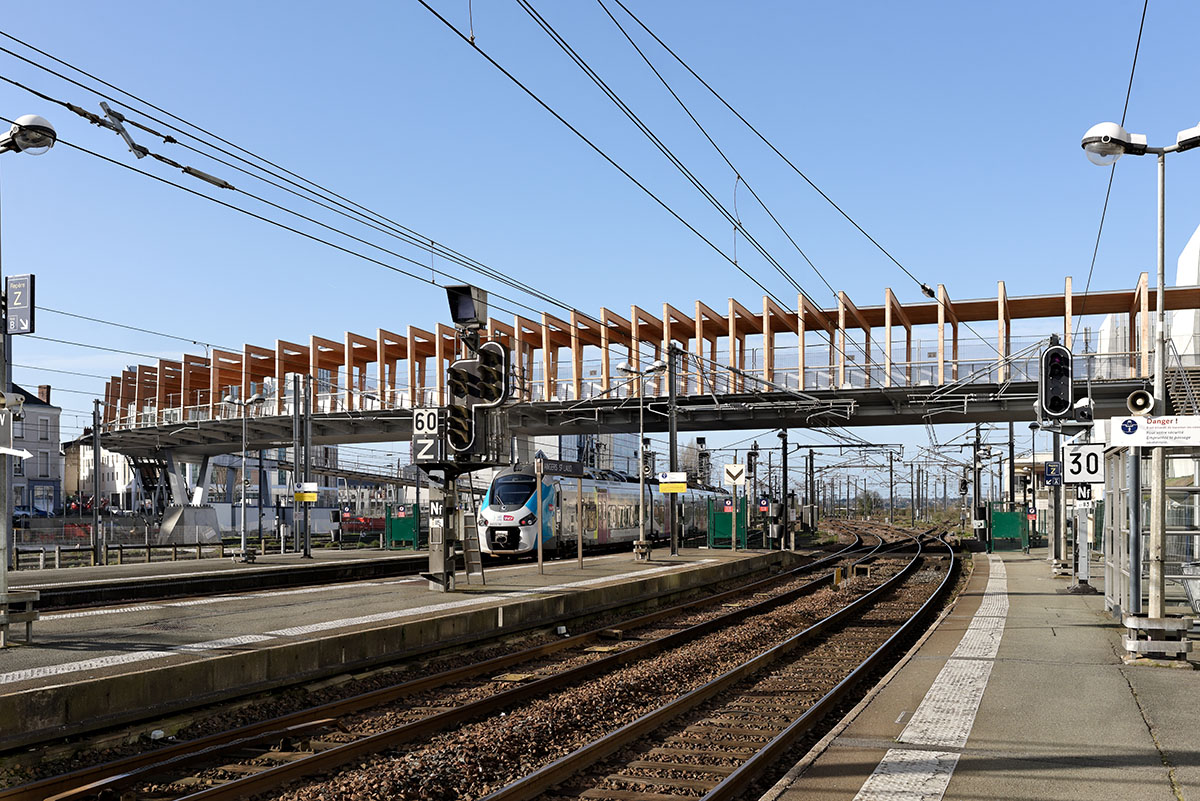 The bridge is a 150-metre-long structure and 8-metre wide that crosses the 70-metre-wide channel of tracks, carved into the topography of the city by the bundles of rails.

"The aim of the new structure is to improve the connection between the two districts separated by the railway line and to provide direct access to the platforms from the street," said Dietmar Feichtinger Architectes.

"The work is in harmony with the dynamics of a renewal of the site and the new public spaces it connects. The bridge runs in a large curve to create urban continuity between the Place Pierre Semard and the Place Giffard-Langevin."

Its substructure consists of a hollow box and steel brackets in which benches with wooden seats are integrated on the west side of the arch.

"It is elegant, light and links large areas," said the office.

"They change their spacing, the substructure changes its cross-section, accentuating the character of the bridge depending on the situation - entering, ascending stairs, walking, waiting, sitting, watching, exiting." 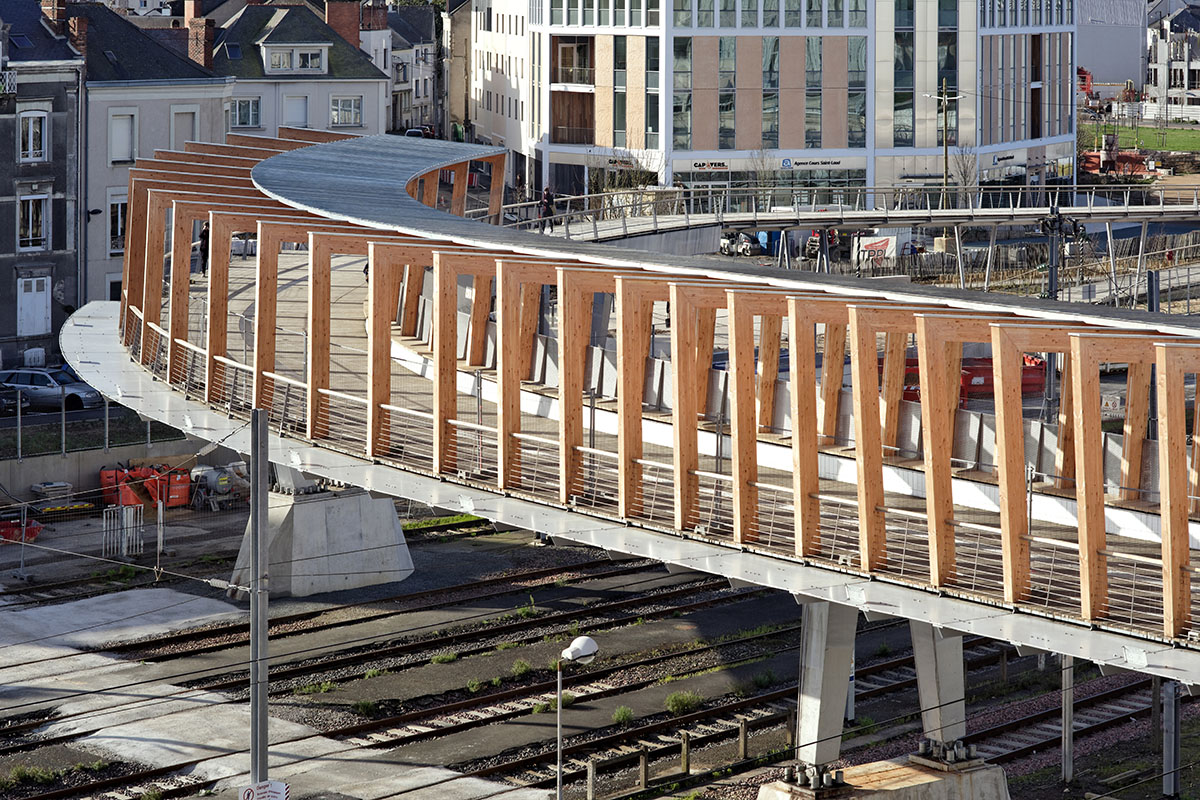 The bridge is a singular construction at the scale of the area with a high-quality course, which raises awareness of the specificity of the place.

Its arched course ensures that its ramp gently touches the new promenade on Place Giffard-Lagenvin and the park.

Three lifts and stairs create a direct, obstacle-free and bicycle-friendly connection with the station and hotel, as well as with the platforms of the trains to Paris and Nantes. In its aesthetics, the bridge is an expression of the renewal of the Station district. Angers is the capital of the departments of Maine-et-Loire, in the west of France.  The city of 153,000 inhabitants is located about 100 km north-east of Nantes and 300 km from Paris. Angers Saint-Laud railway station is a major transport hub in the city centre.

A TGV train to Paris stops there 13 times a day, travelling the distance in 1.45 hours. There are about 40 trains a day to Nantes. The station is located rue Auguste Gautier to the north of the railway line, rue Fulton passes to the south of it. In the area of the station, the bundles of rails are about 70 metres wide and cut a deep corridor running towards the city. The urban development plans include an upgrading of the area. On the railway station side, offices and a multi-storey car park have been built on Rue Auguste Gaultier, and a hotel is under construction. 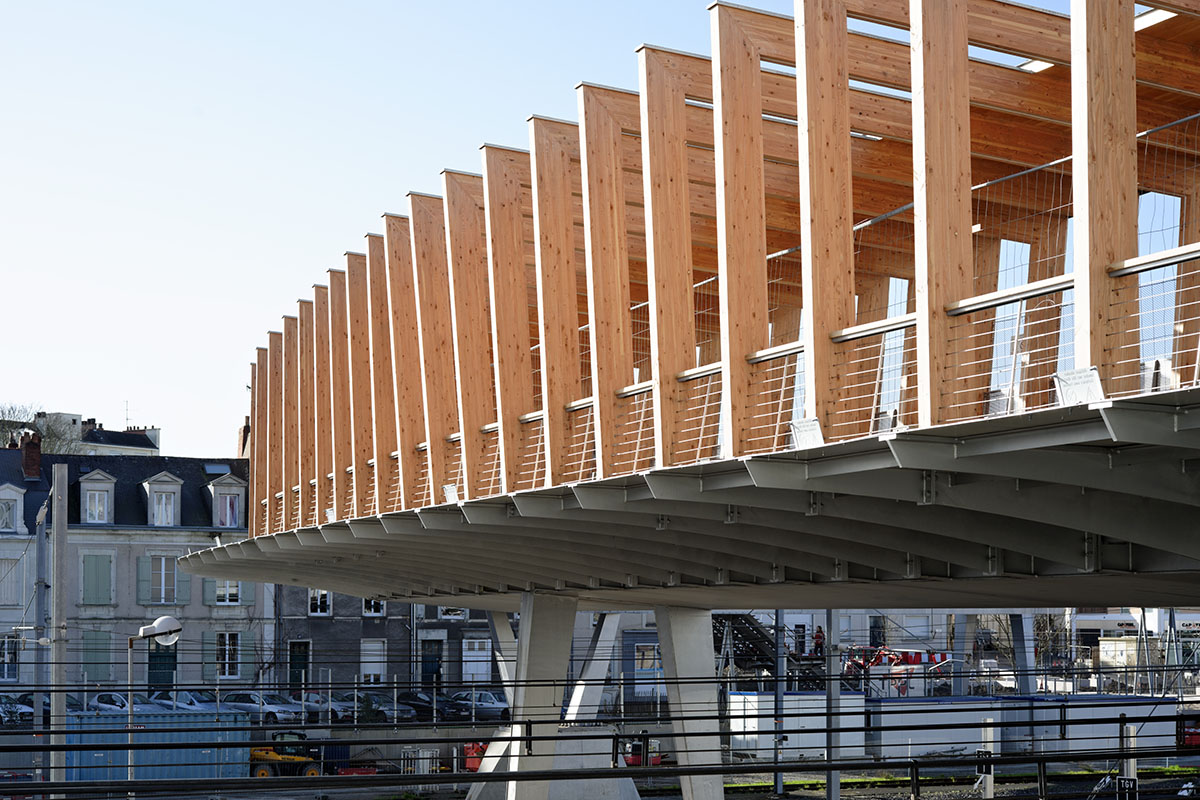 To the south of the bundle of tracks, a new promenade and park will be built on Fulton Street. The bridge for pedestrians and cyclists is part of this modernization and has been won by Dietmar Feichtinger Architectes.

Their design is based on the urban scale, overcoming the barrier of the railway tracks and providing direct access for disabled people to the platforms via lifts and stairs. 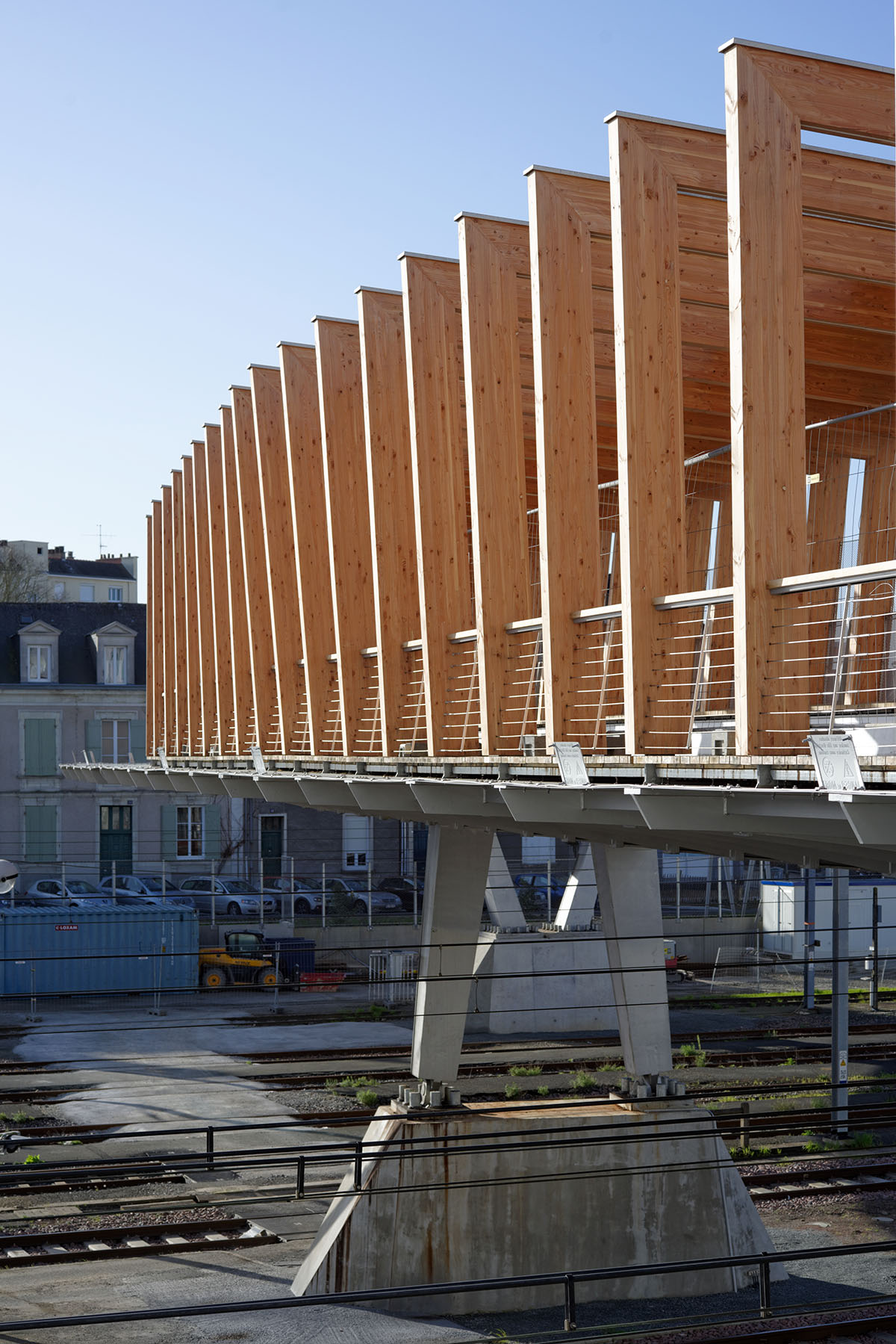 Above all, it is a singular traffic structure that becomes a landmark with its gently curved path, its constructive elegance and the remarkable laminated wood porticoes that support both, the lighting and the flat roof.

The varying distances between these punctuated images of the path offer different views of the tracks, the trains and the city. Benches along the balustrades invite you to sit down. The bridge becomes a path and a place. The wooden porticoes become strong identity elements of the bridge. They underline the crossing and enter into a dialogue with the city. They punctuate the journey. By their different distances, their slightly variable sections and the arched layout of the bridge, they open up constantly new perspectives on the tracks, the arriving and departing trains.

They condense towards the middle of the bridge, creating a sheltered atmosphere that invites to pause, while the larger distances at the beginning and end of the bridge broaden more and more the view of the city. 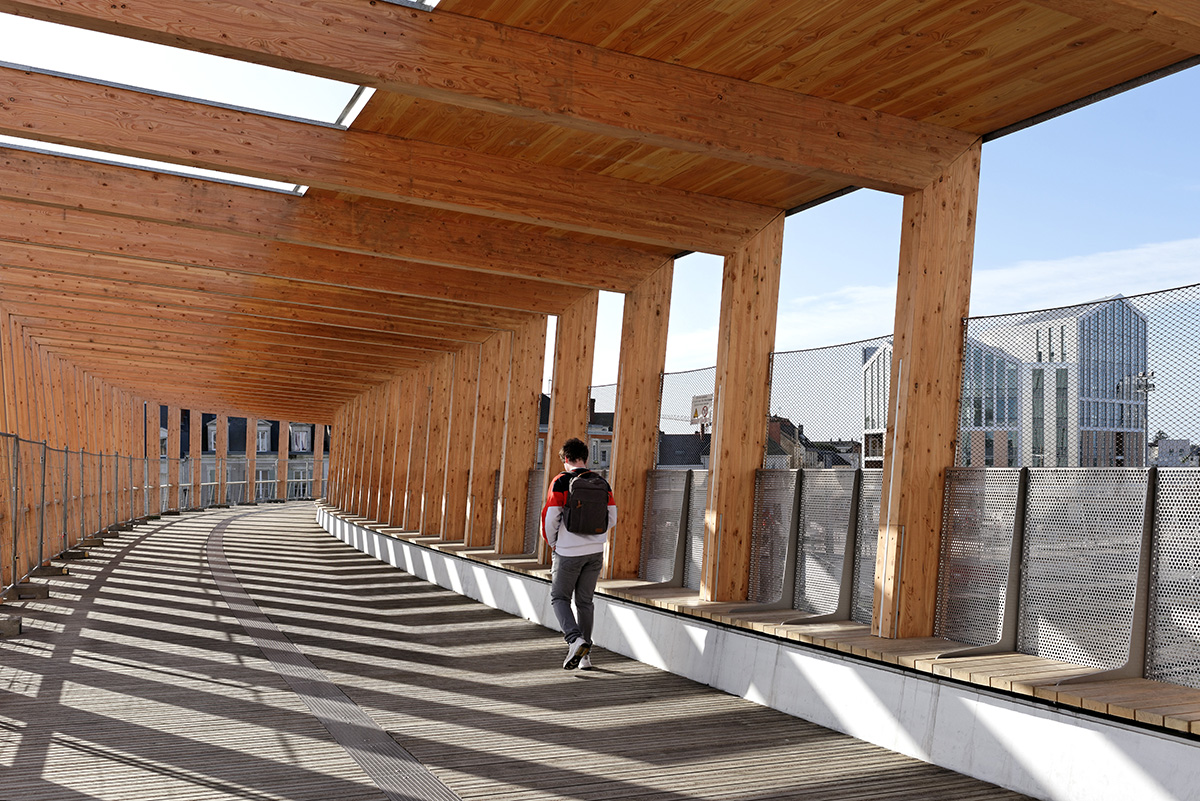 Work on the volume of this project also includes the shape of each portico. Its angle of inclination changes with the rhythm of the movement. In the middle, the cross-section of the frames is continuously enlarged. This continuous opening of the frames increases the significance of the bridge over the rails.

These wooden frames not only shape the relationship between the passers-by and the place, they also have a specific function: they serve to integrate lighting, protect against weather and wind. These elements are integrated into their construction. 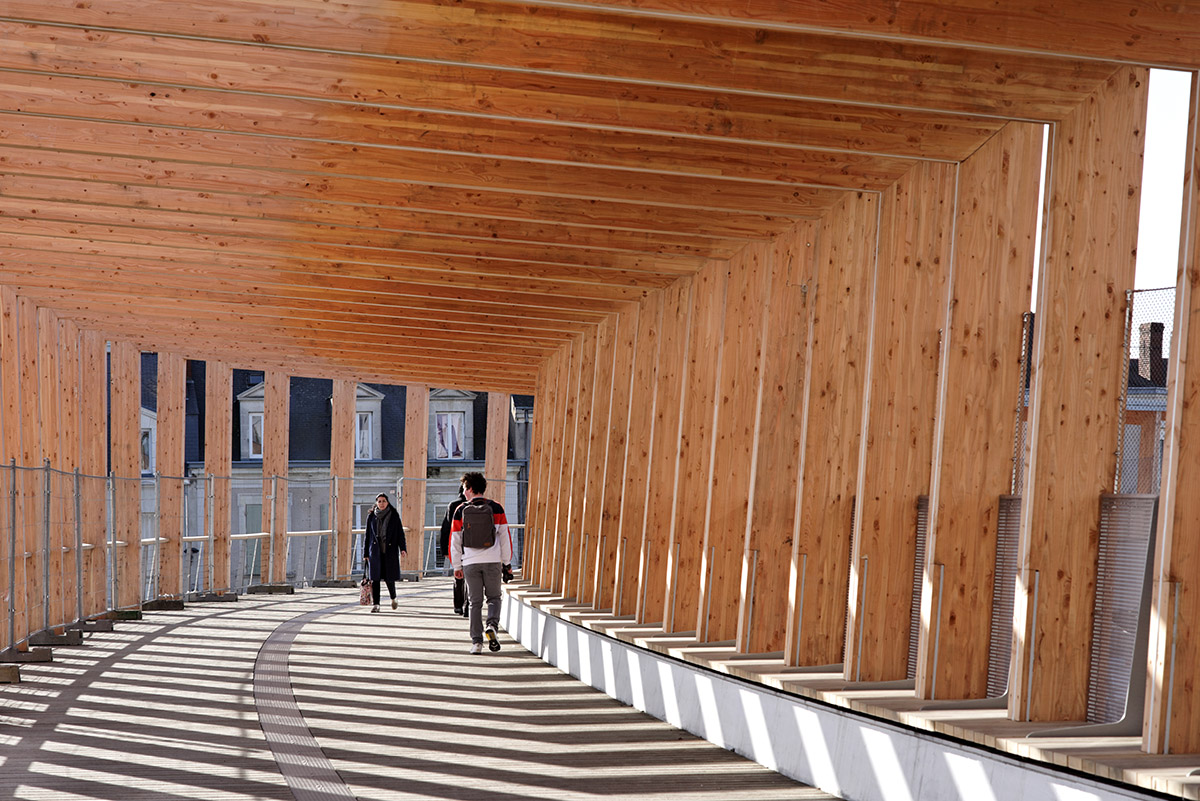 Anti-slip strips are embedded in the wooden footbridge, ensuring that the bridge can be used safely even under bad weather conditions.

"The new bridge for pedestrians and cyclists at the St. Laid railway station is much more than just a railway crossing. It is a new urban landmark where people like to stop, linger, talk, watch the trains, arrive or depart," added the office. 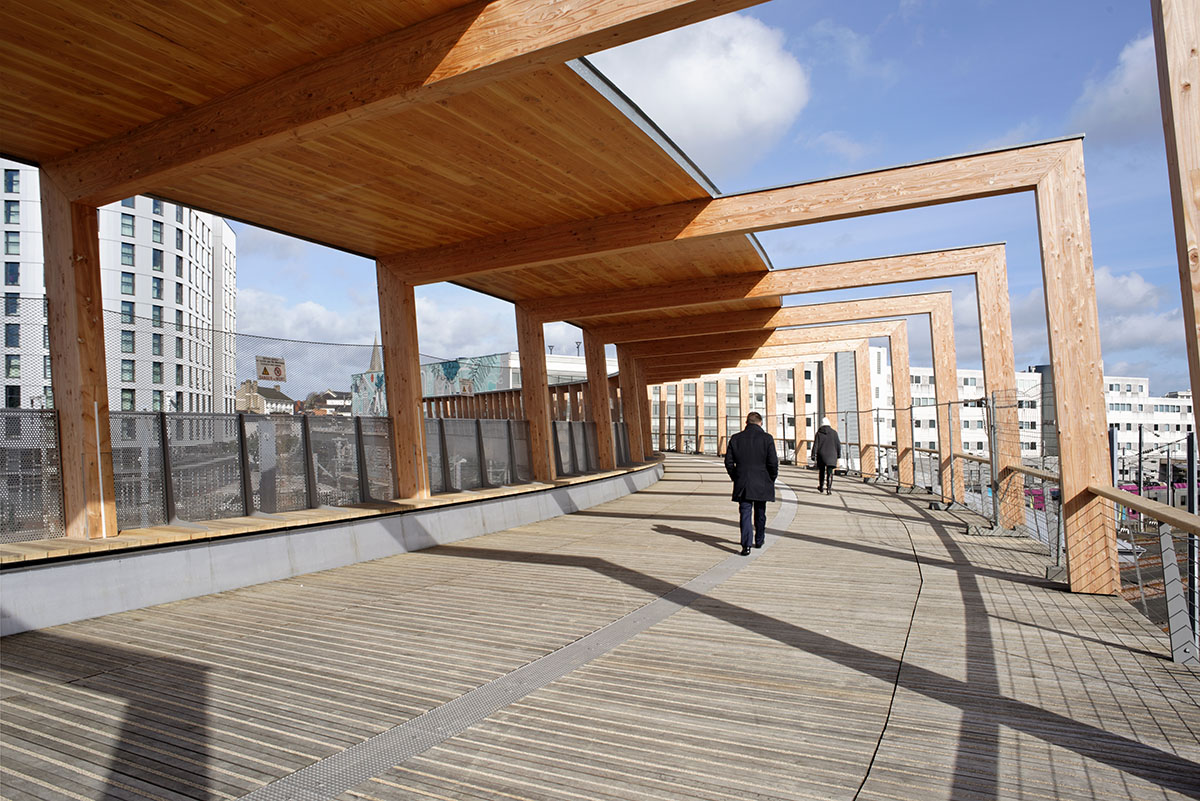 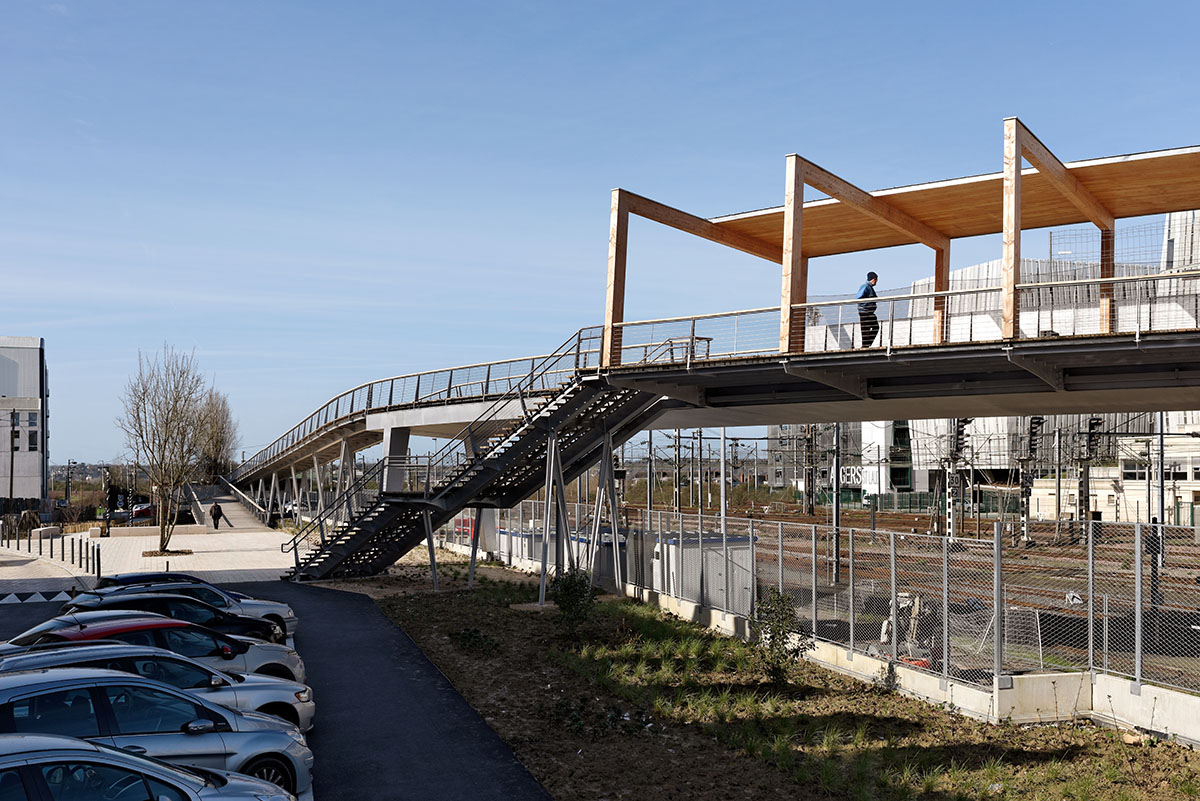 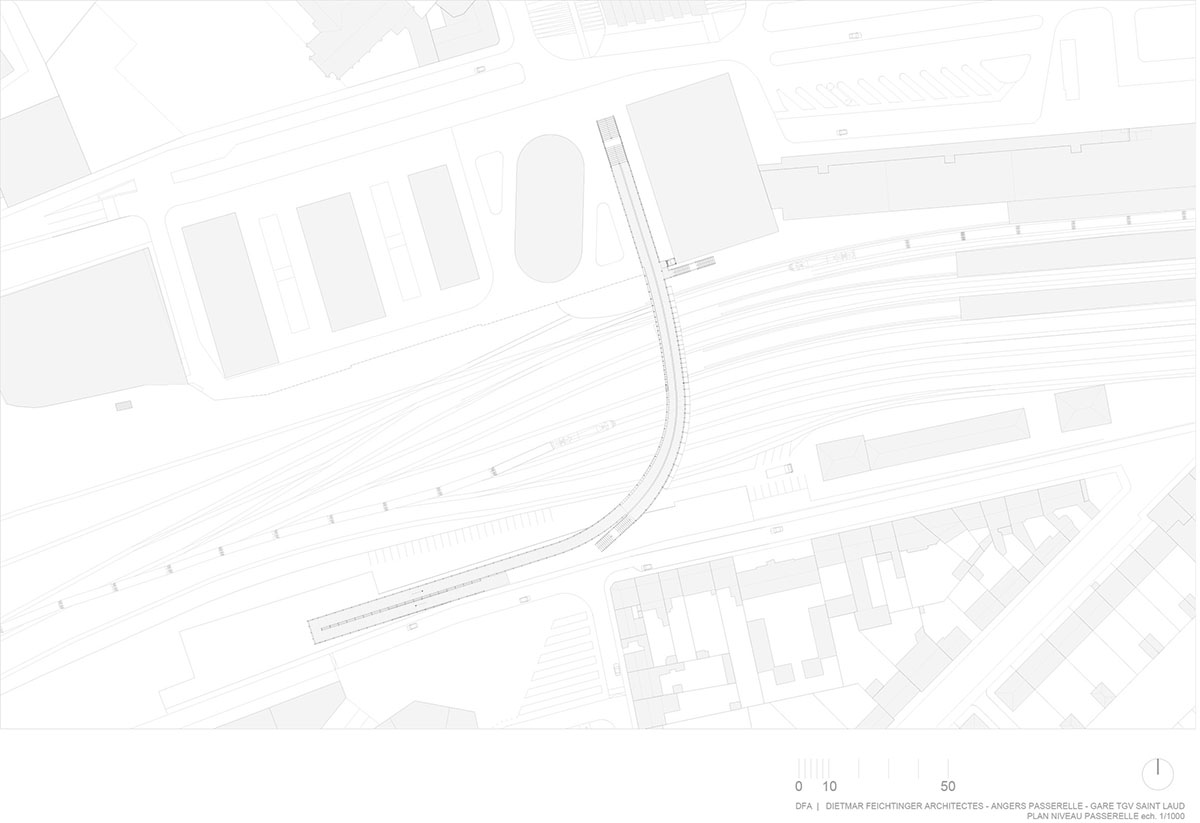