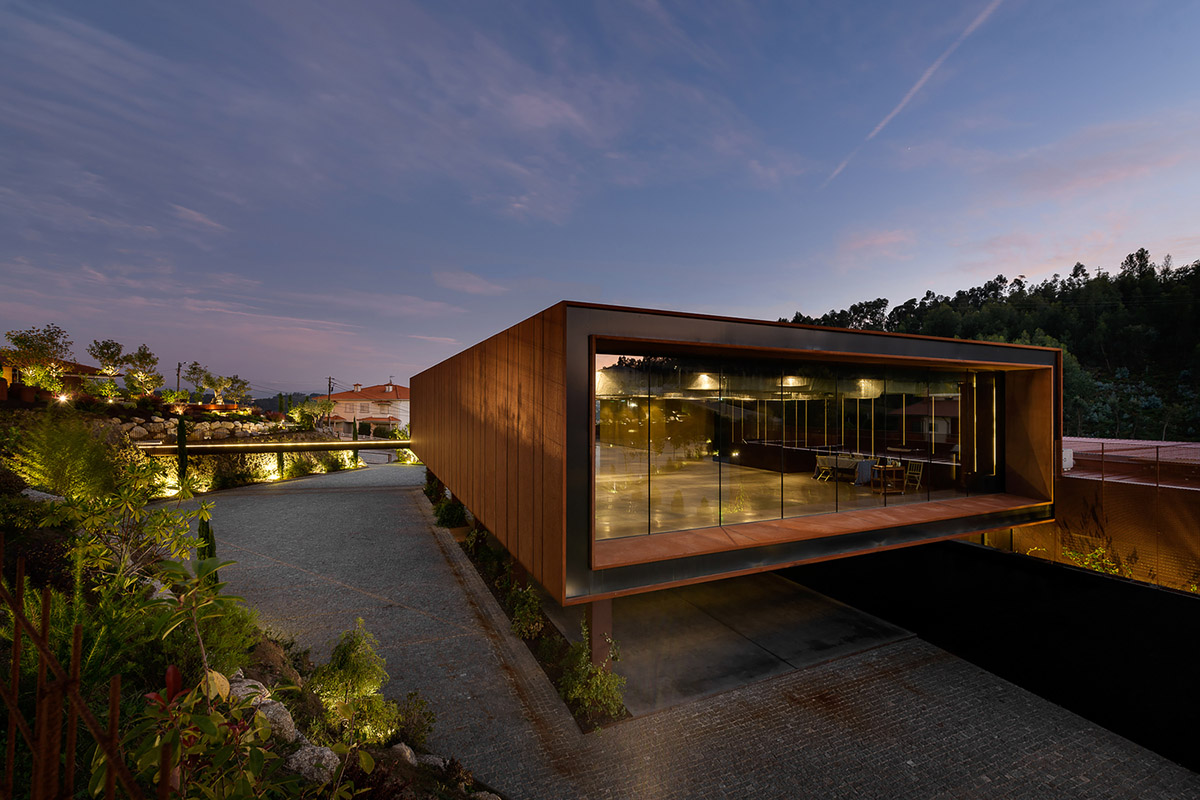 Portuguese architecture studio MMVarchitects has built a corten steel cultural center that is lifted over slender columns to adapt to the terrain within it is located. Called Suspended Matter Box Cultural Center, the 670-square-metre building is simple in form but functions with its surrounding area.

The building, located in Felgueiras, Oporto, Portugal, was derived from the question: "can an architectural contemporary volume be a good neighbor to rural surrounding?." 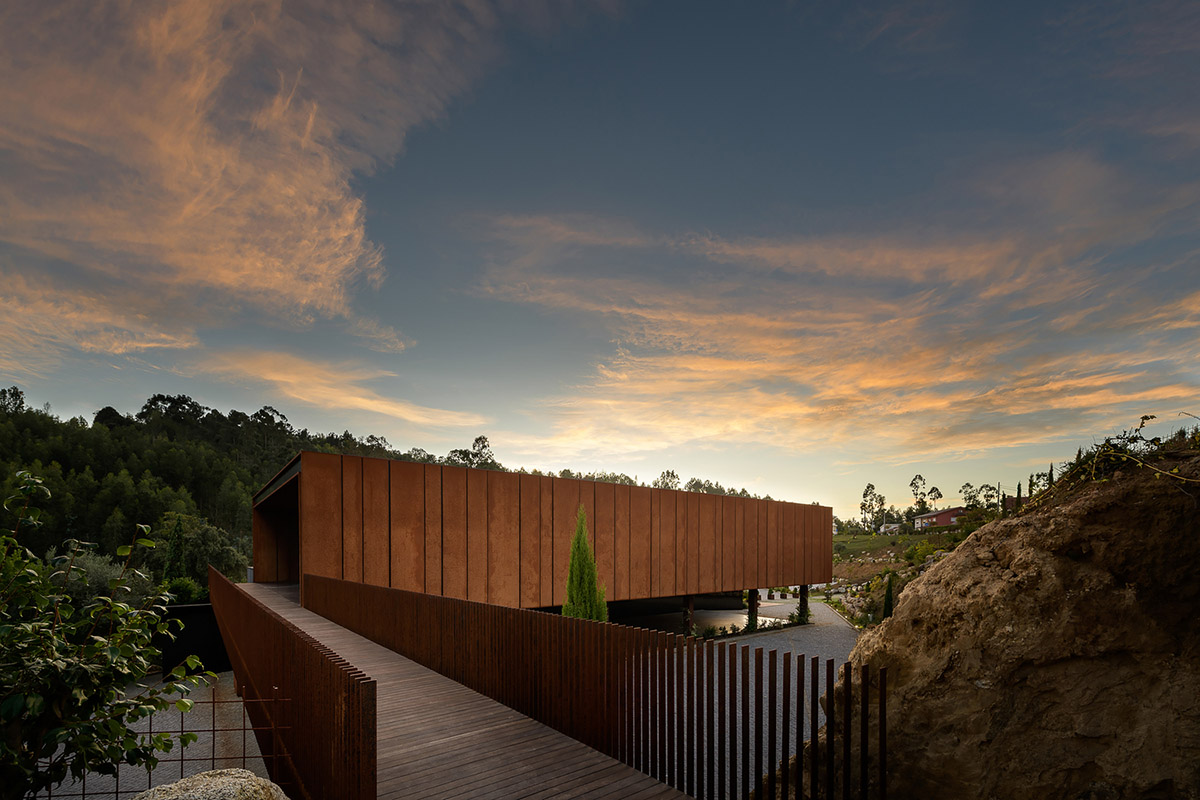 The studio explained that "this request had everything to be straightforward." "We were to do a remodeling and amplification project of a restaurant," the studio added.

"It looked like a simple thing to do (and quite a secondary one, regarding our other assignments), but in short time two aspects came to surface that would rapidly change our thoughts." 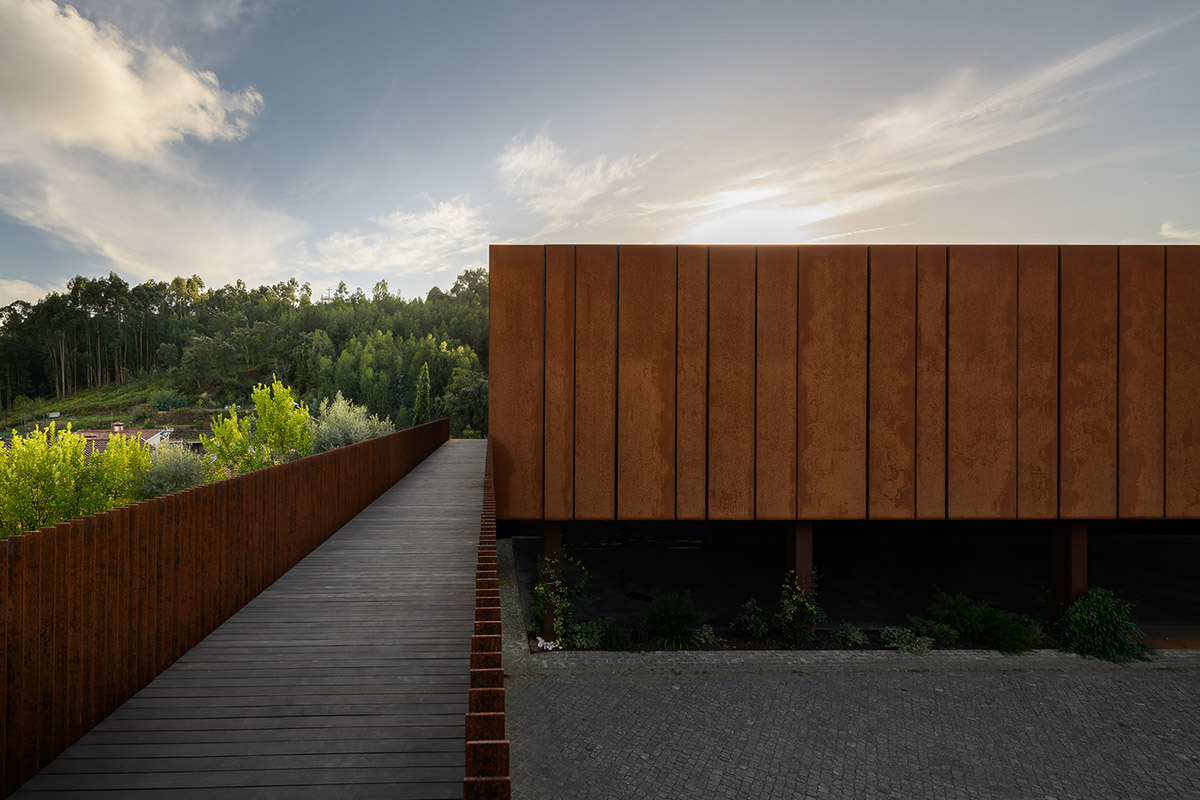 The building is made of a single monolithic volume clad by corten steel but it's interiors are much more detailed and well-crafted for a various performances to create its own flow. 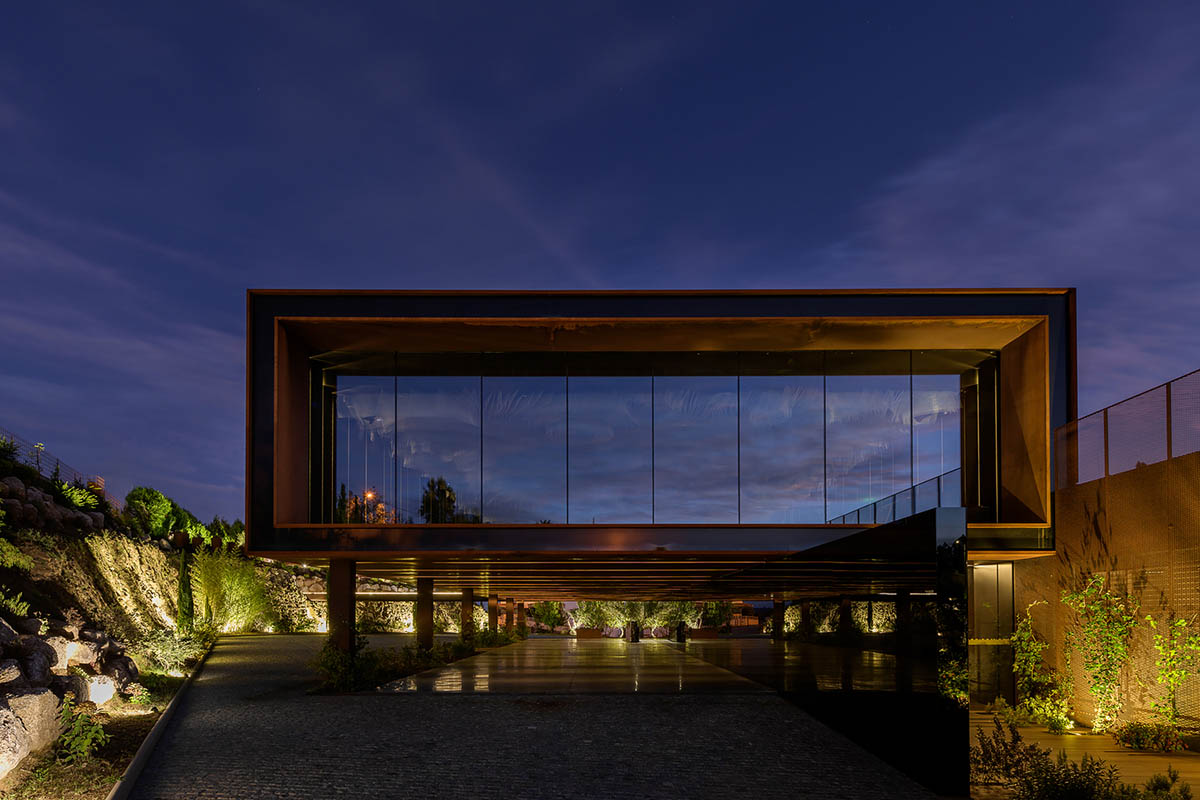 MMVarchitects had to work upon an existing, contemporary project in the first stage of its construction, and the other one, the team worked on its surrounding area, as the project relates with the location. 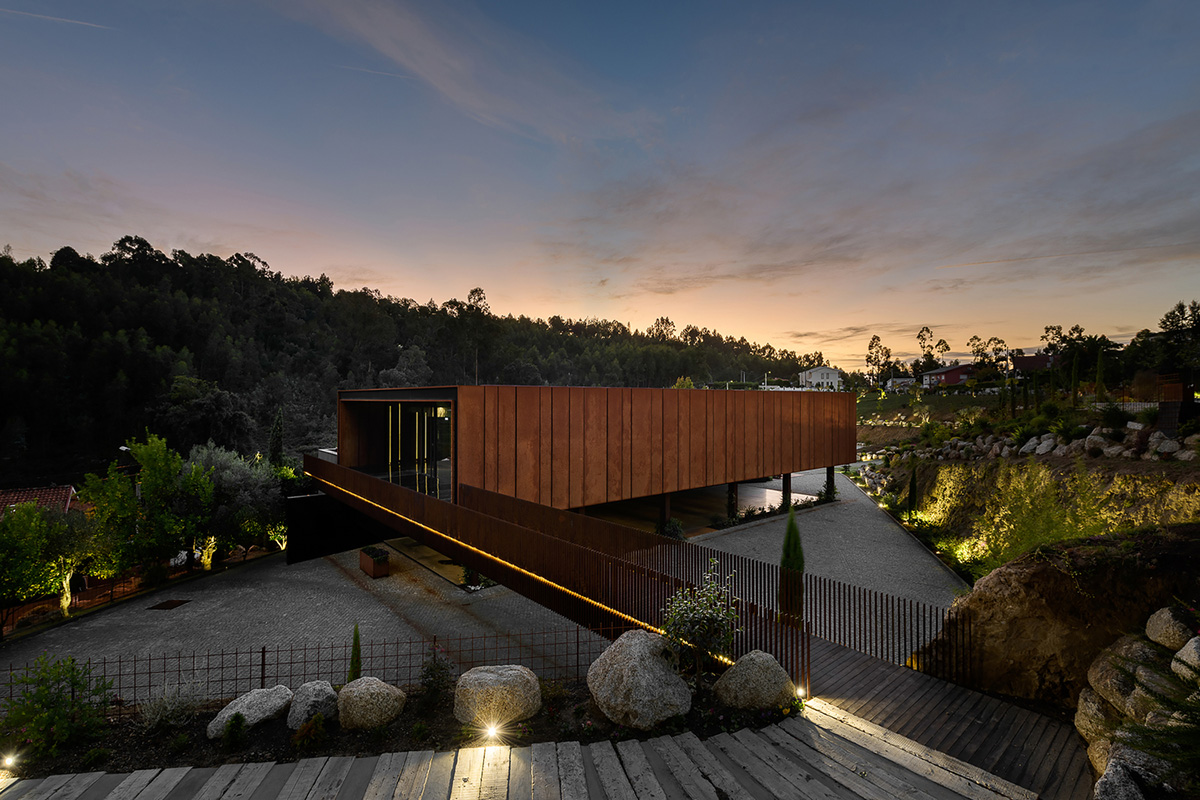 "Felgueiras rural milieu is typified by a mixture of traditional old housing amongst agricultural fields and small backyards," continued the studio.

"So, it became a challenge that would require a very well thought-off alteration, a sensitive landscape integration, and a general concept approach that would provide meaning to it all." The client’s main intention was for his business to turn a well-known space for relevant events in site and surroundings, according to the architects. 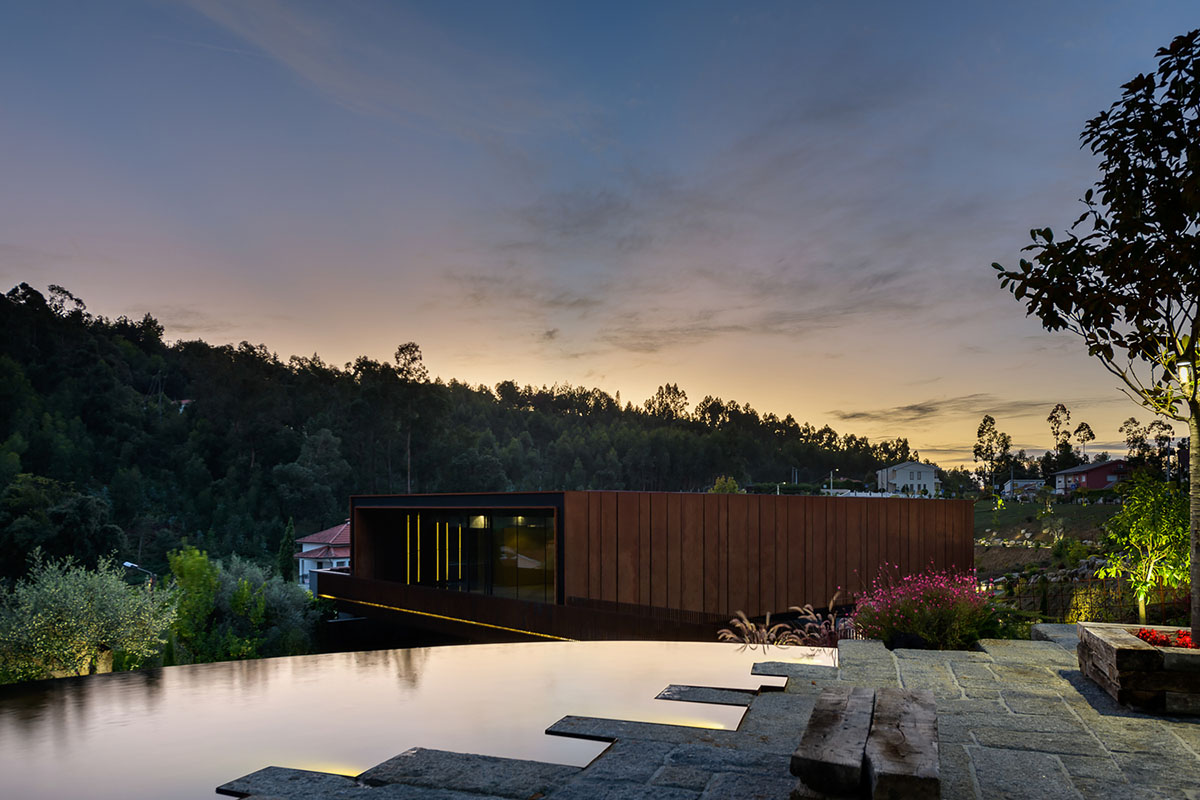 Having this important principle in mind, the studio reinforced its outstanding position in the terrain giving even more expression to the rectangular original volumes. This basic assumption alone was very positive for it brought more flow to the creative process. Light entries, footbridges and exterior arrangements managed to maintain the geometrical purism and contrasting personality but did it in dialog with natural matter. The main charismatic element, to which the architects refer to as landscape-ceiling, lies in the main events area. All the space creation is based upon a suspended element made of flexible metallic knit. This thin transparent net represents the wind, its fluxes and intensities, bringing dynamics to a very wide, dull ceiling. It became the ex-libris for being so artistic and unique, but at the same time, neutral enough to serve all purposes.

The accesses by corridors and stairs are somewhat extensive as well, so the architects opted to give it balance through rhythm and alignment, either horizontally or vertically, using construction solutions or coatings, sometimes only ending outside in the exterior gardens. 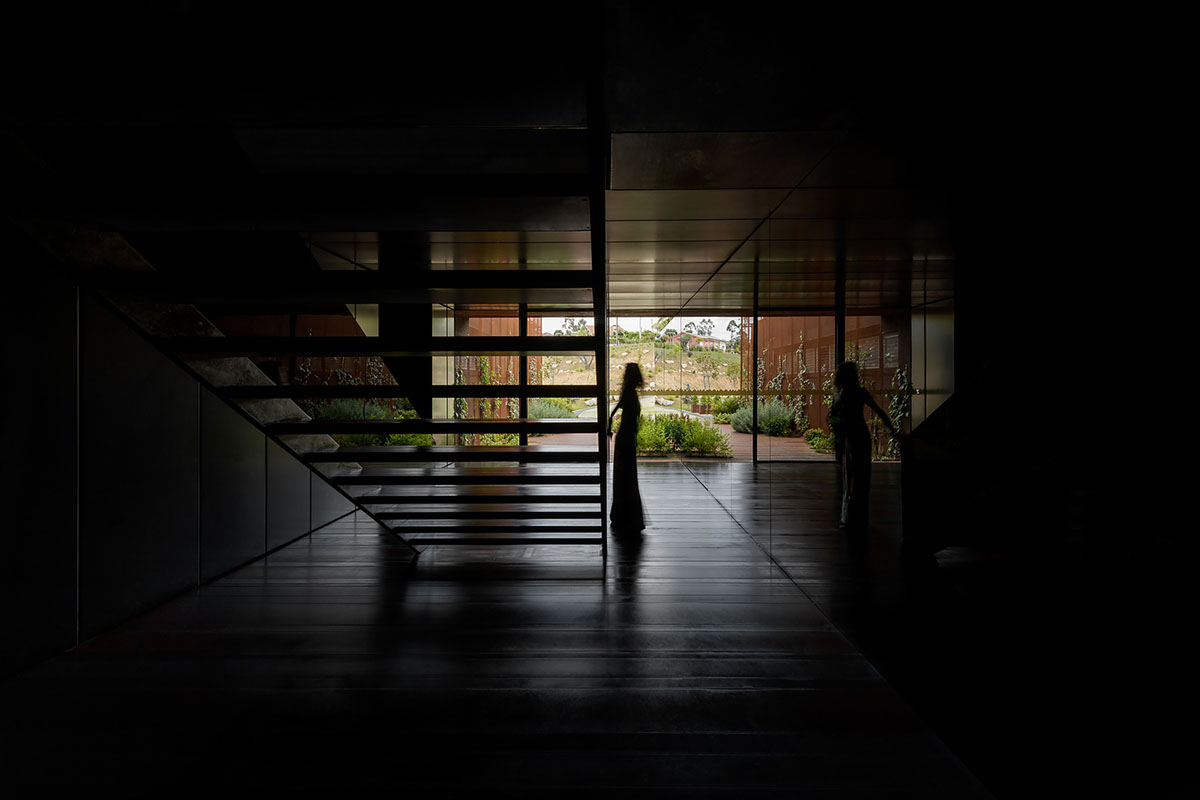 "We are absolutely convinced that this new space has everything to play an outstanding role to all it will host in the future, without losing its boldness and timelessness, and therefore representing a success to the construction owner," continued the firm.

"Getting to an unrepeatable and singular architecture, is to accept the restlessness each project brings in the search for a specific result and not only a solution."

In many ways matter was this assignments main inspiration and the landscape ceiling (or suspended matter) that very same specific result. 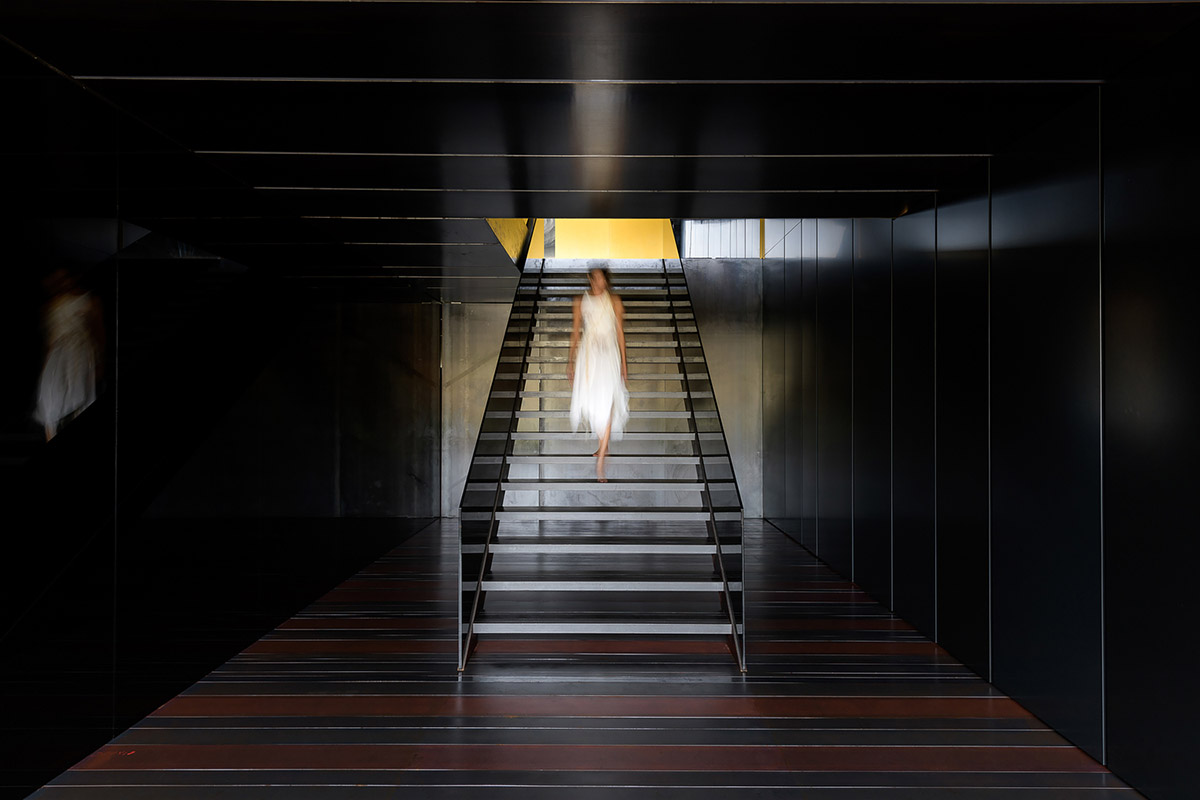 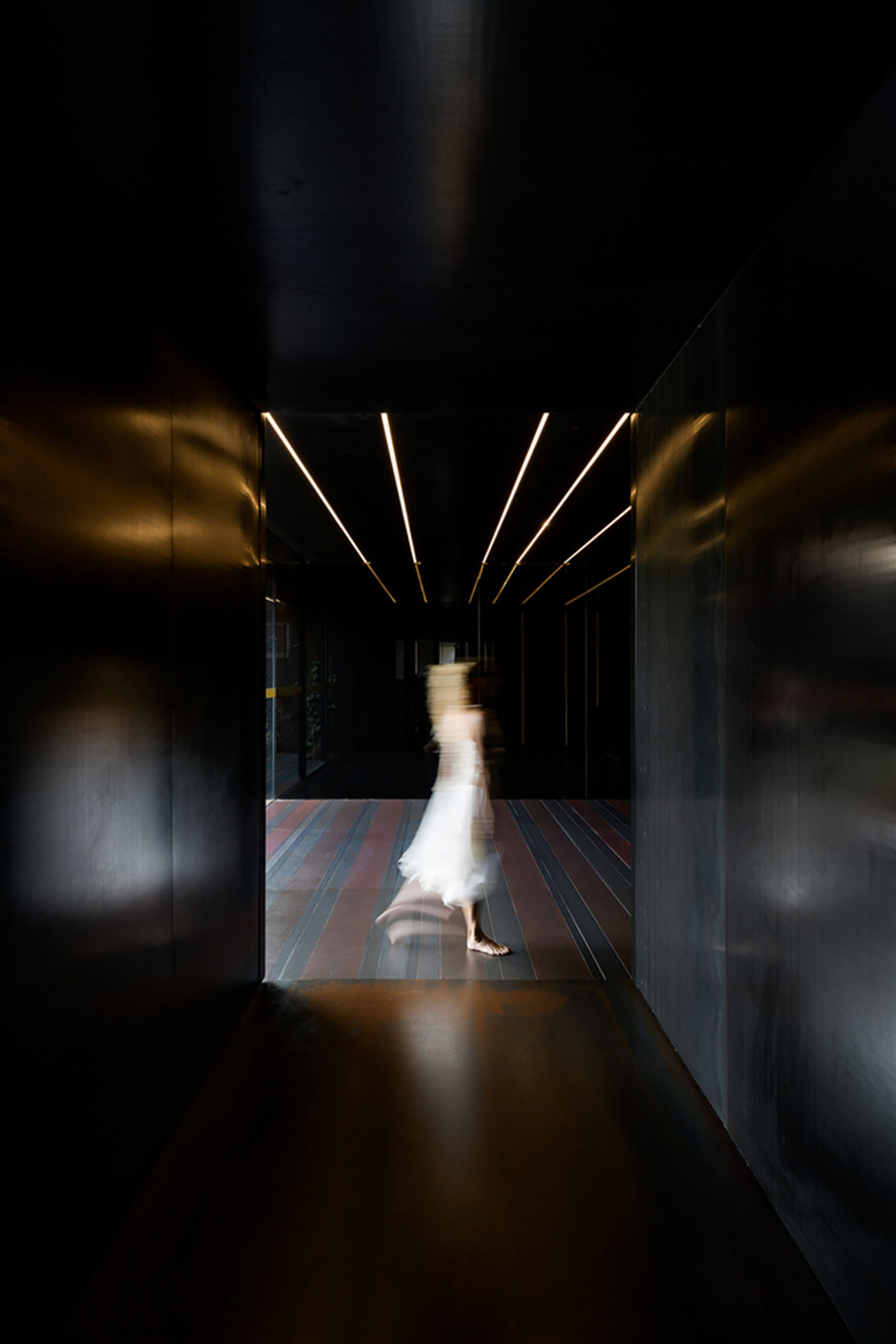