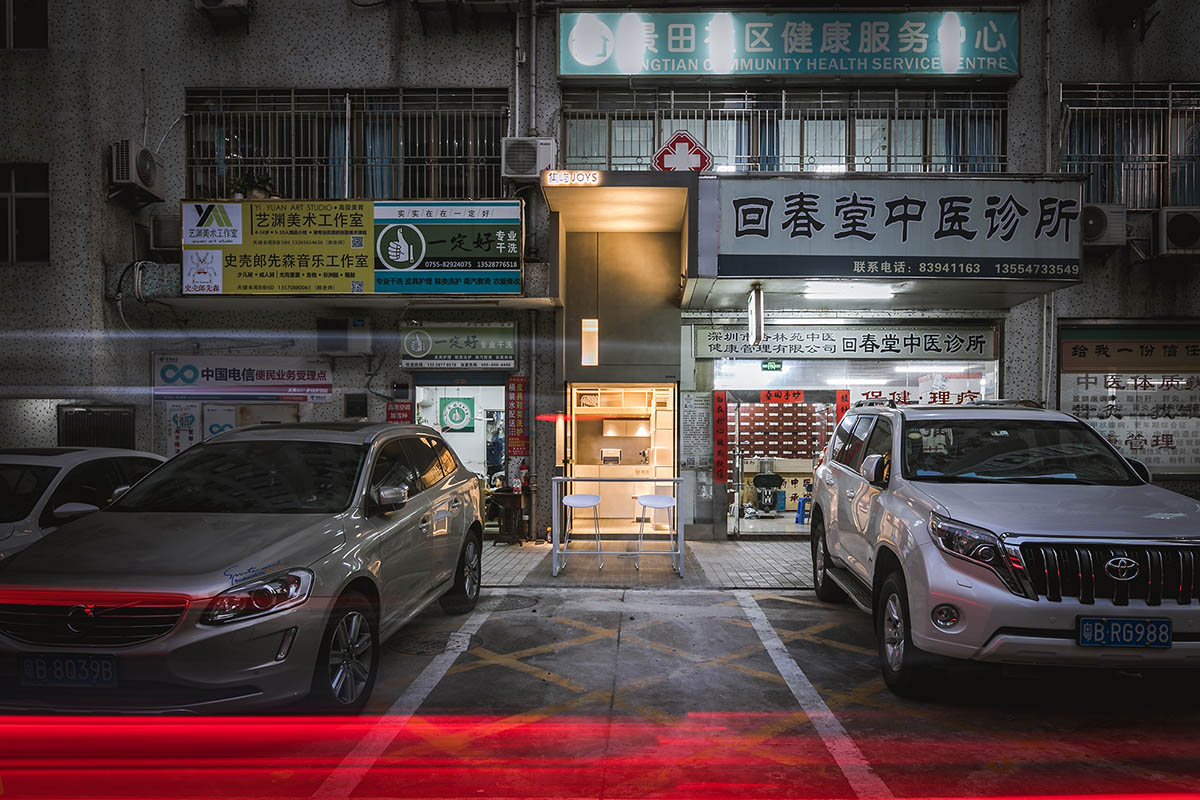 Chinese architecture firm Onexn Architects has completed a small cafe on a narrow plot in Futian District of Shenzhen, China. Named JOYS, the cafe occupies only 9-square-metre area, JOYS is a new space paradigm in the city. It's small, but doesn't lack depth, since it's the integration of ideals, thoughts, cultures, and neighborhood.

"9 square-meters is a scarce small spatial scale in the city undergoing rapid development. It has nothing to do with blueprint, speed or magnificence, but is about a small spatial narrative that is easy to be ignored but indispensable," said the office. 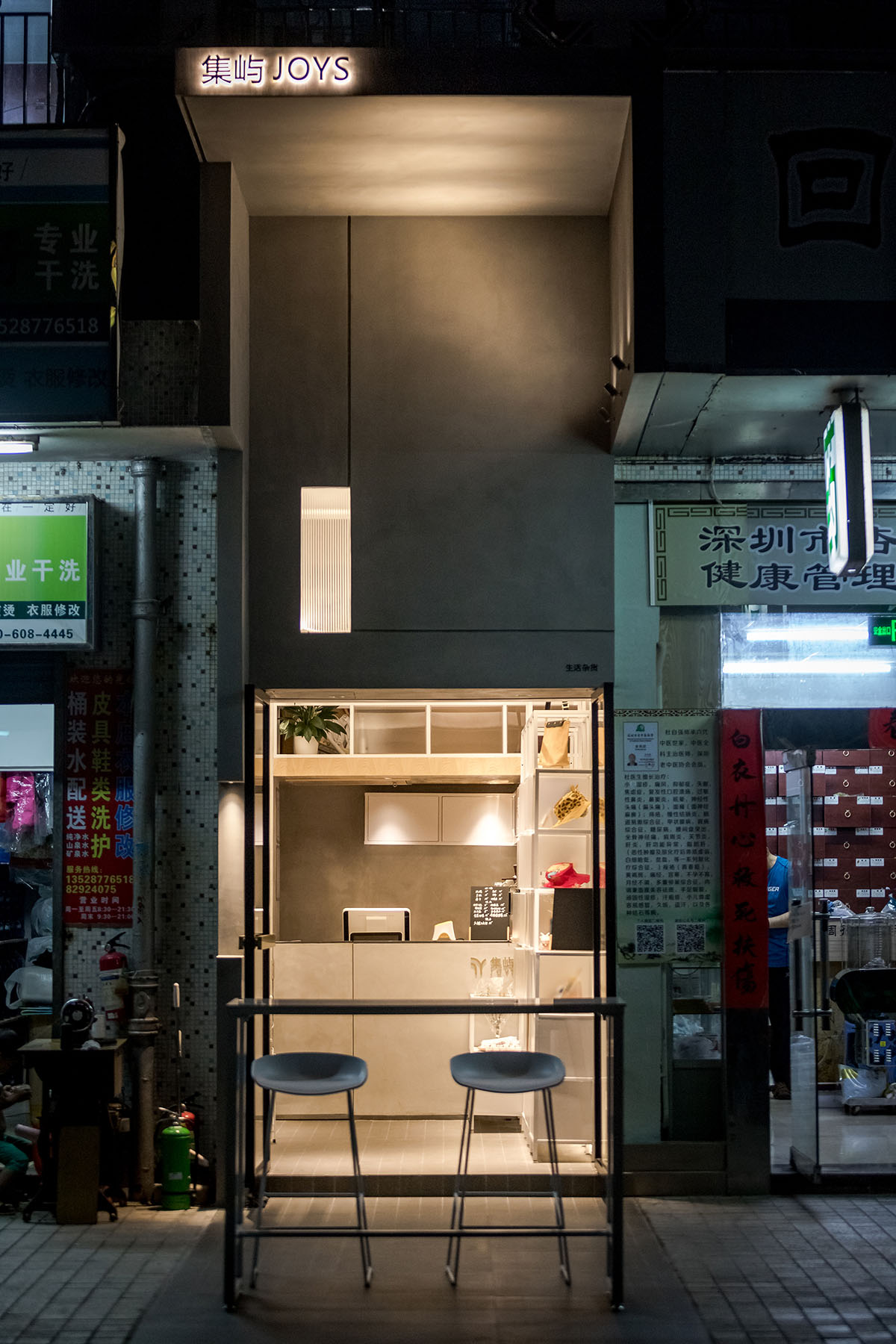 Onexn Architects identified a perspective of intervention by taking into consideration both spatial reality and social significance, intending to endow the 9-square-meter space a sense of existence and enable it to bring people closer.

In Delirious New York, a retroactive manifesto for Manhattan, it reads that "The fatal weakness of manifesto is their inherent lack of evidence. Manhattan's problem is the opposite: it is a mountain range of evidence without manifesto." 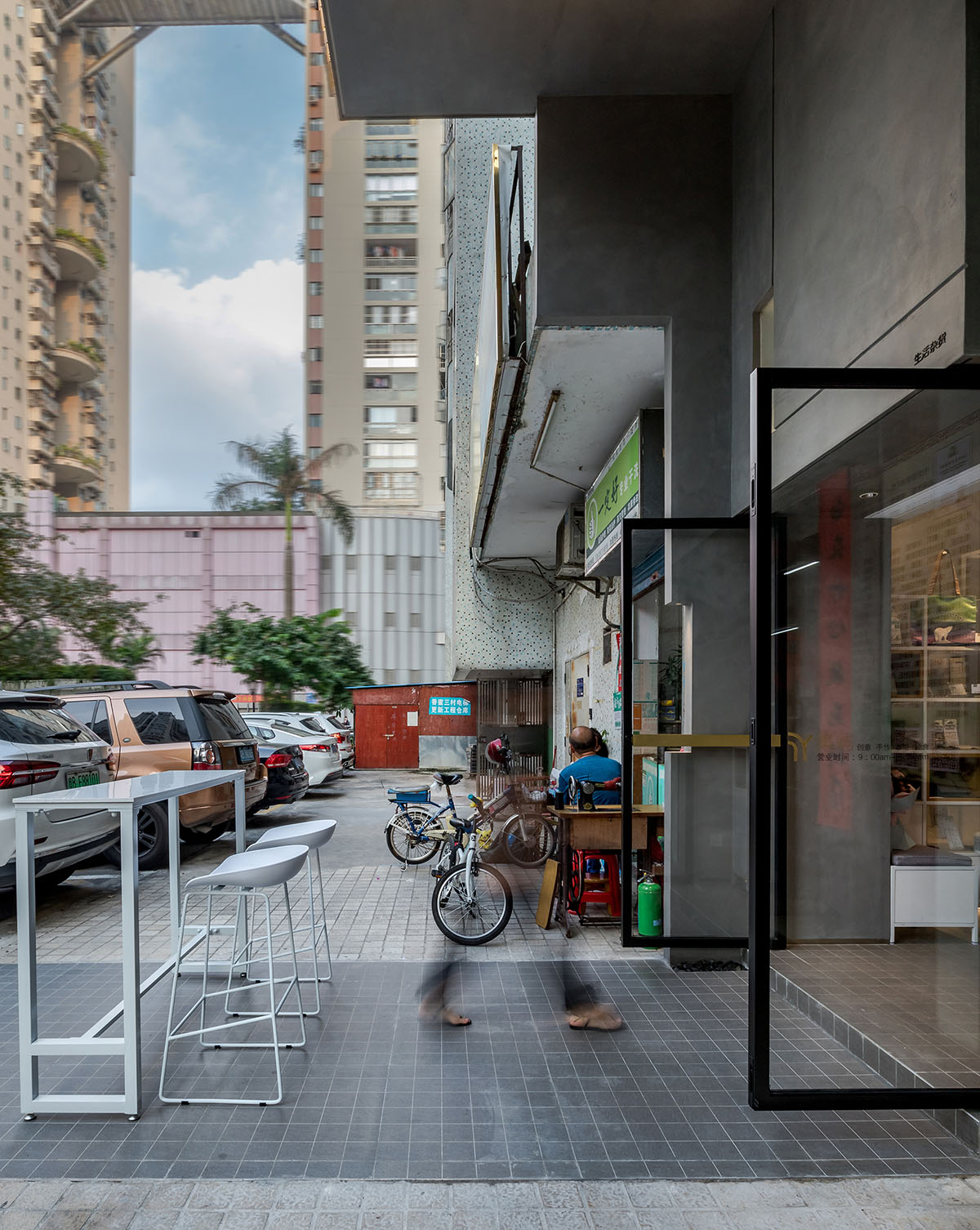 Under the backdrop of rapid urban development, JOYS, as a space that carries ideals and care, was eventually implemented as an interpretation and supplement of the community atmosphere that has been on the decline. 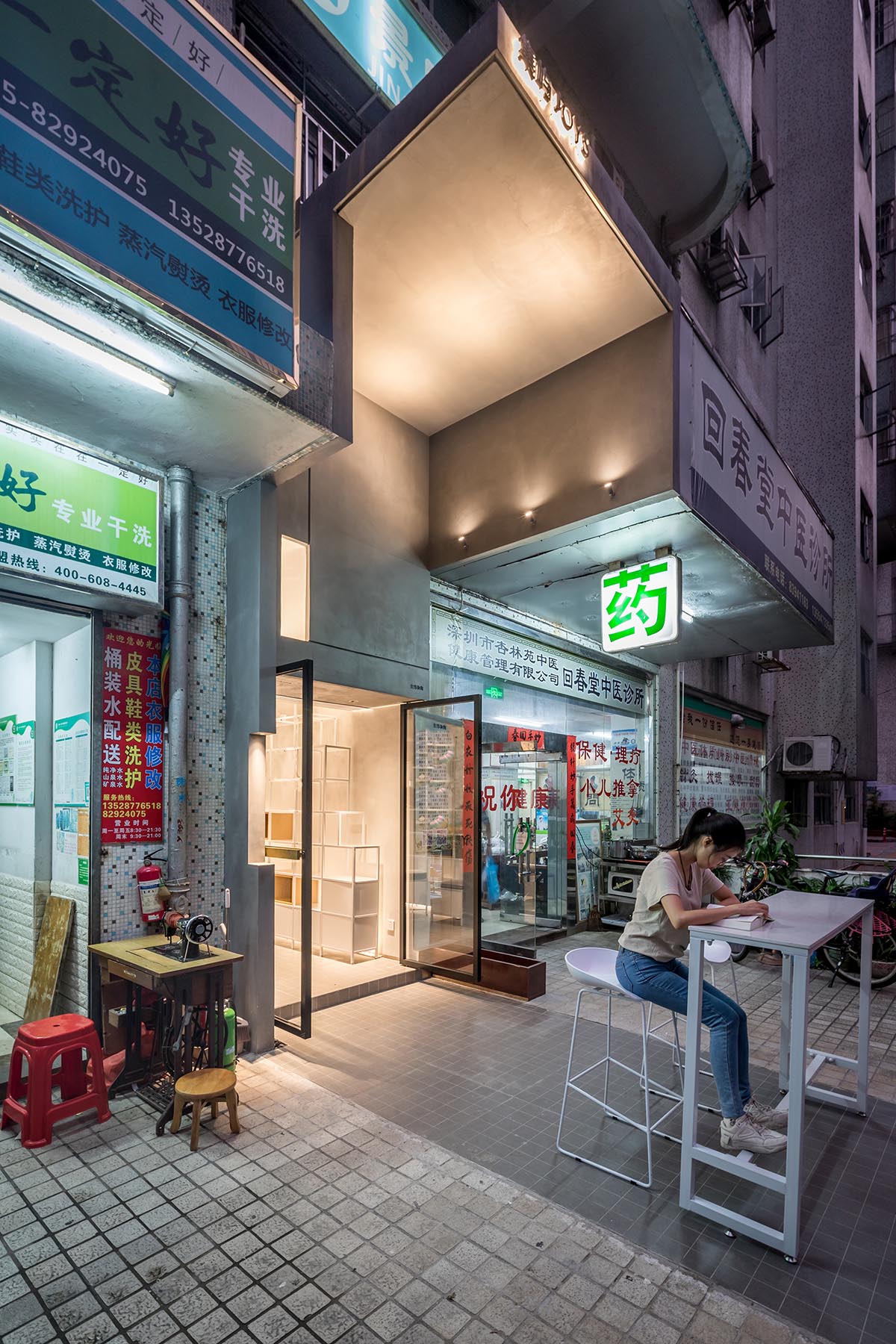 In the drawing "Recapture the Interest of City", the studio depicted the avenues and alleys in cities, and tried to look for the street scale and the significance of neighborhood safety supervision which Jane Jacobs wrote about.

Unlike those street blocks that are covered by building shadows, the spaces outlined in this drawing are endowed with their own features and tension, either being public spaces or landscape rooftops that are visible and accessible. Joys is part of them. 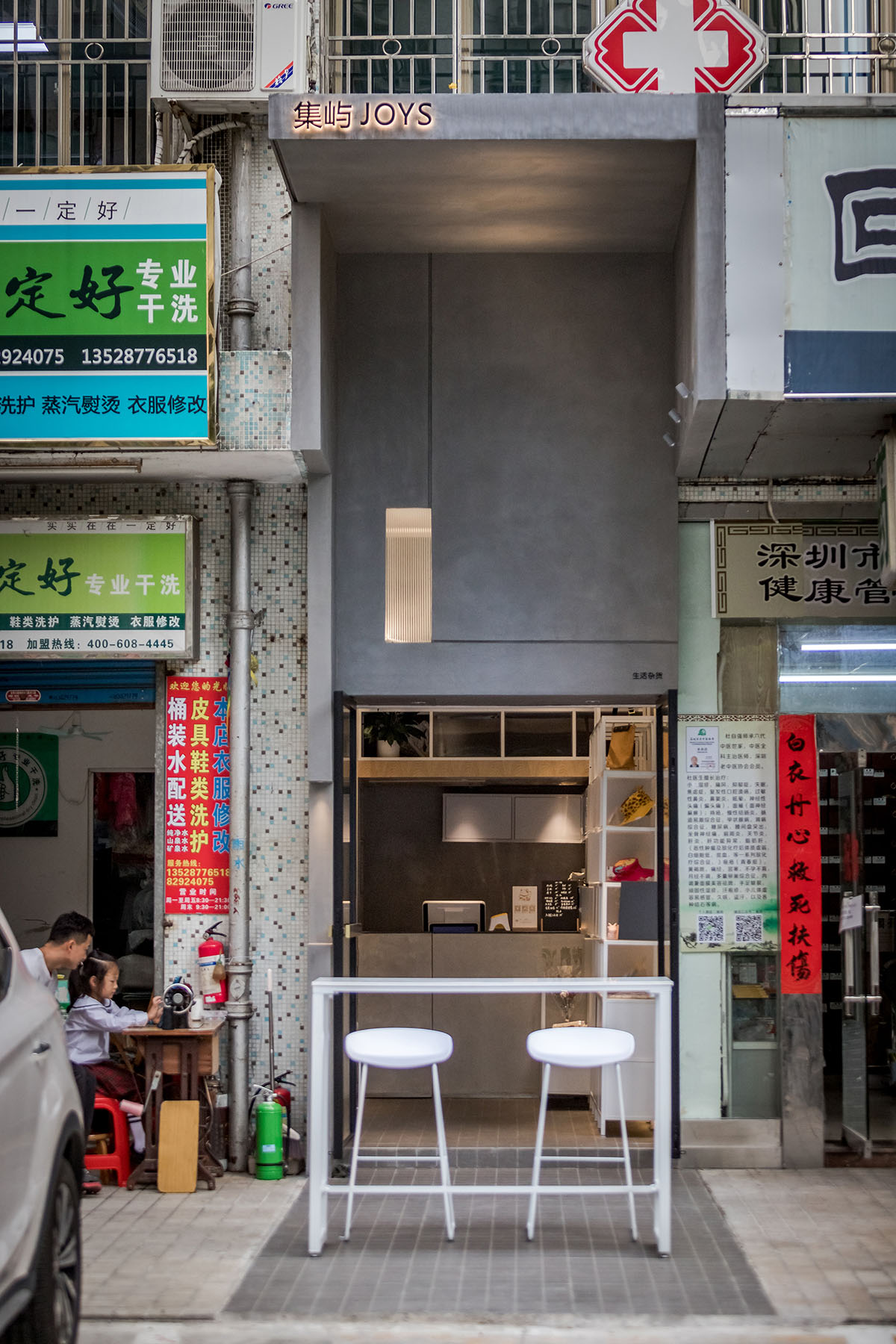 JOYS is located in Xiangmi Third Village that was built in the 1990s. Over the past 20 years, the neighborhood has undergone the loss of vitality, which was accelerated by the obsolete community facilities. In addition, the ground floor public space of the community has been occupied by the surging above-ground parking area.

"We have seen public greening plots are rezoned for high-rise development." 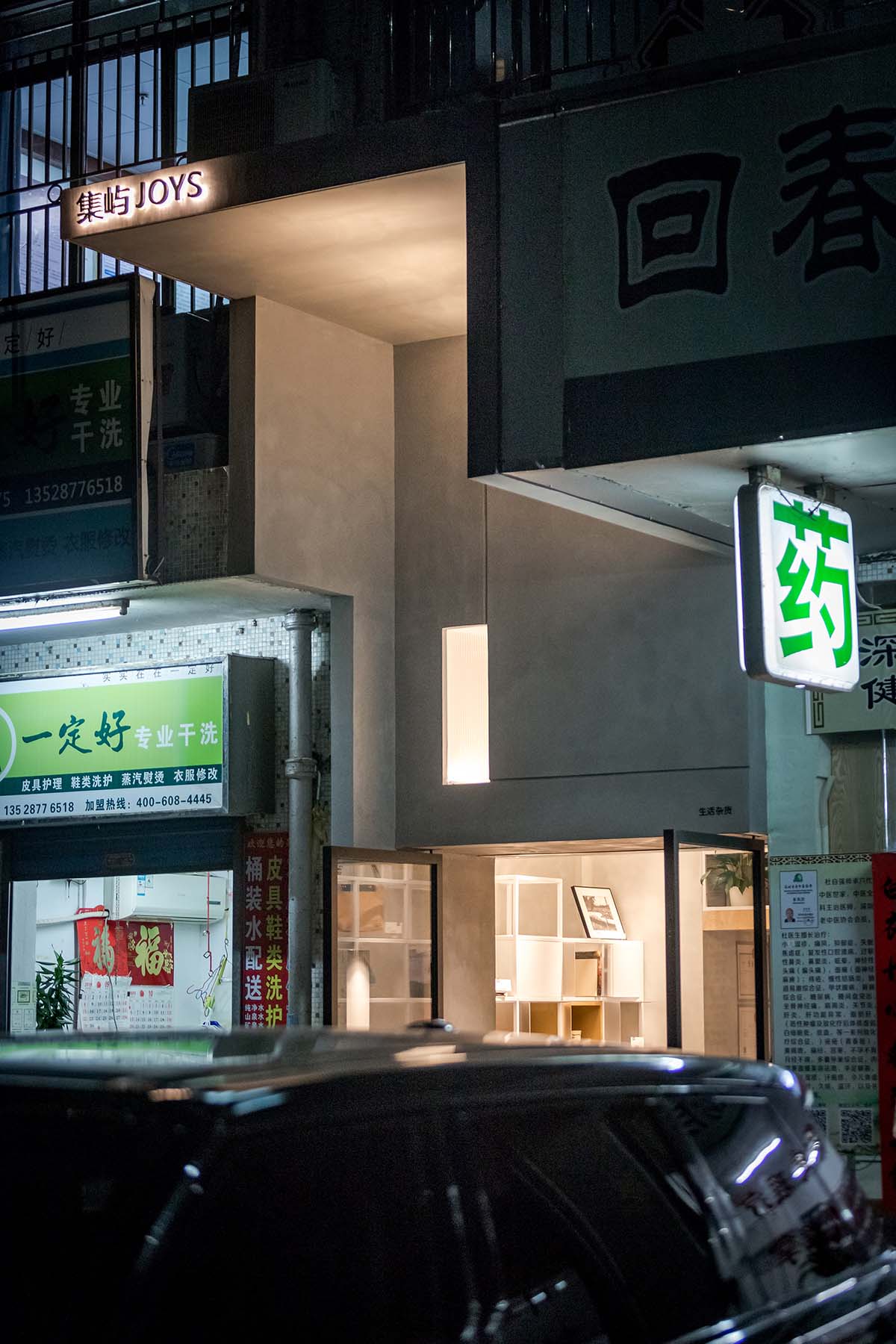 "Such cases in which public space is occupied by other purposes can be found everywhere. Therefore, as approaching this project, one of the goals that we shared with our client was to restore a public node on the premise of meeting functional needs. We had to create within the 9-square-meter narrow space." 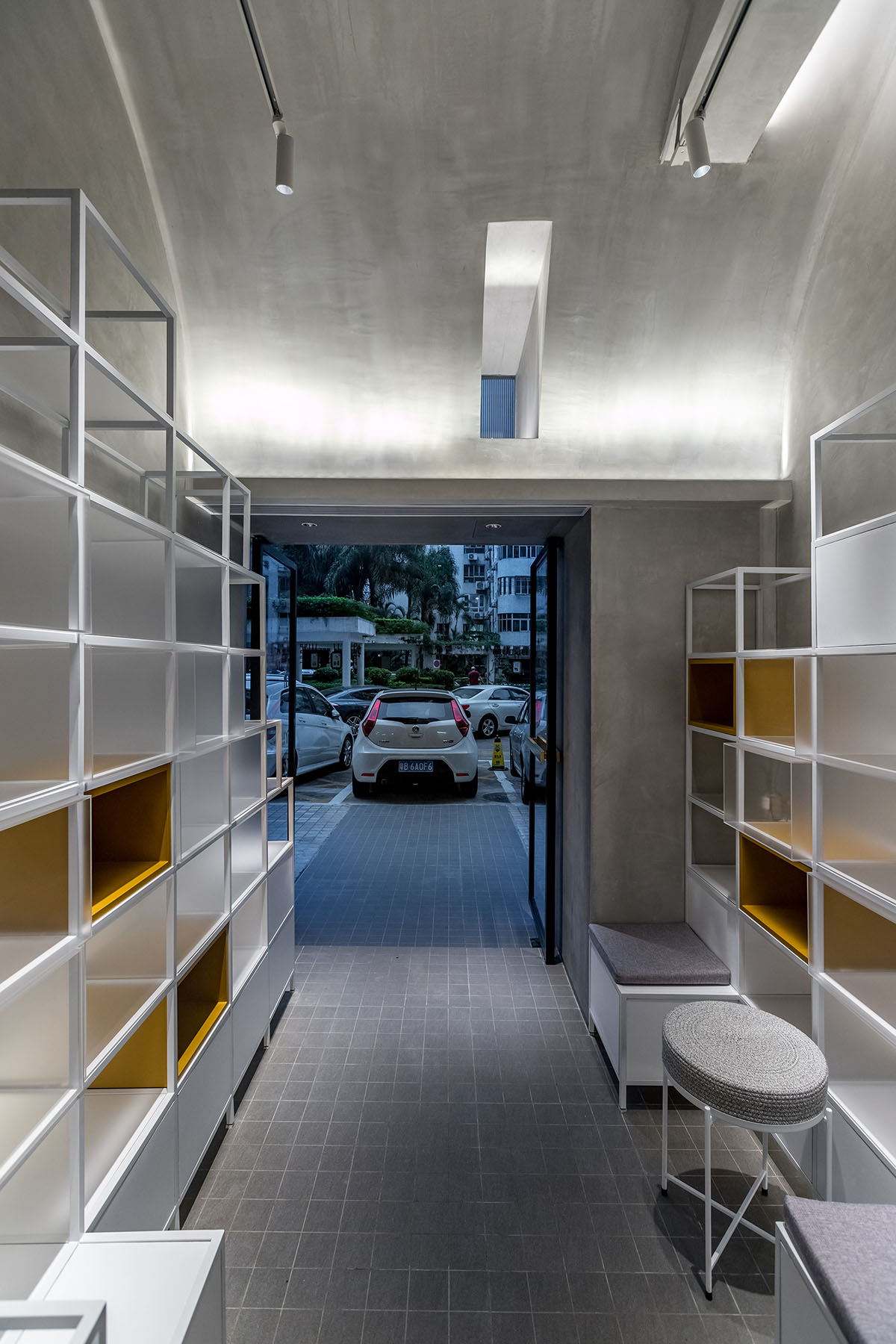 Strategy: imagine an "building" integrated into the site

The original space was a community-based air conditioner repair shop. The first time the studio inspected the site, the studio found many air-conditioning parts and oil stains were scattered in front of the entrance, so people had to detour to pick up clothes from the laundry or take medicines from the pharmacy next to the repair shop.

There is limited space where residents can stay since the site leaves a mingled, neglected or blurred impression. The neighbors are connected in daily life, but what lacks is emotional connection. As approaching the design, the most challenging part was not the project itself, but the misunderstandings from the neighbors. However, disagreements were resolved one by one during the construction process, hence eventually making JOYS a place that brings happiness to everyone, just as its name indicates.

The site is linear and narrow, with a width of less than three meters. The key was to figure out how to make it easily visible from afar while at the same time creating pleasing experience inside the space.

The storefront, i.e. the facade, was given top priority in the overall configuration of structures. In the interior, the utilization efficiency of space was enhanced via customized shelves and the mezzanine. 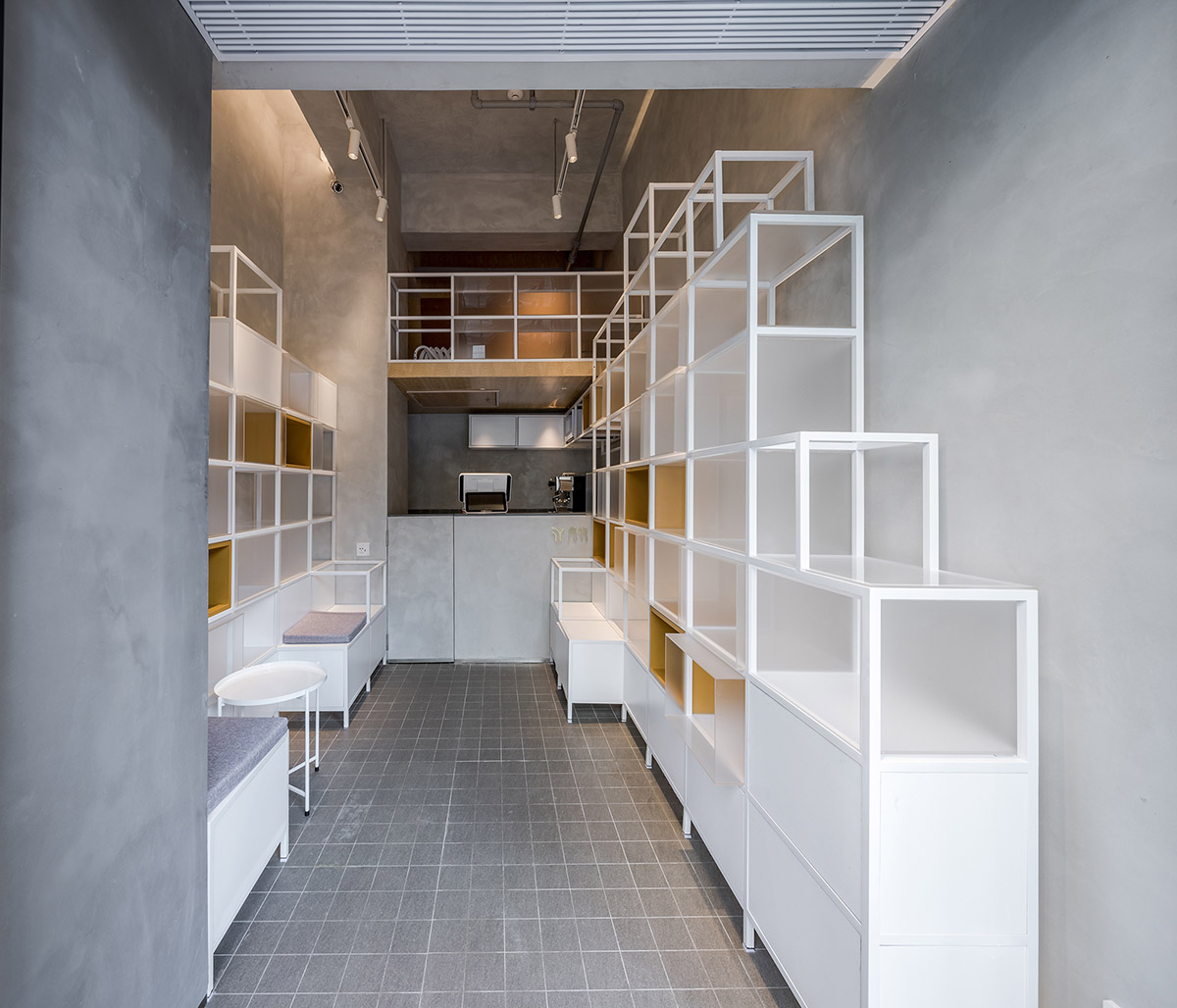 The facade is just like an installation that is embedded into the space. The eave is its extension, symbolizing the sentiment of returning home from the city. The inward-facing part of the "installation" is a curved suspended ceiling, which dissolves into the interior and relaxes customers.

Observing JOYS from afar, people will firstly impressed by its eave and the tranquil atmosphere. The space is open to the community, like a living room that creates memory. After the original heavy and low light box was removed, the front field of the space becomes more spacious and expansive, leaving room for the transition of emotion. 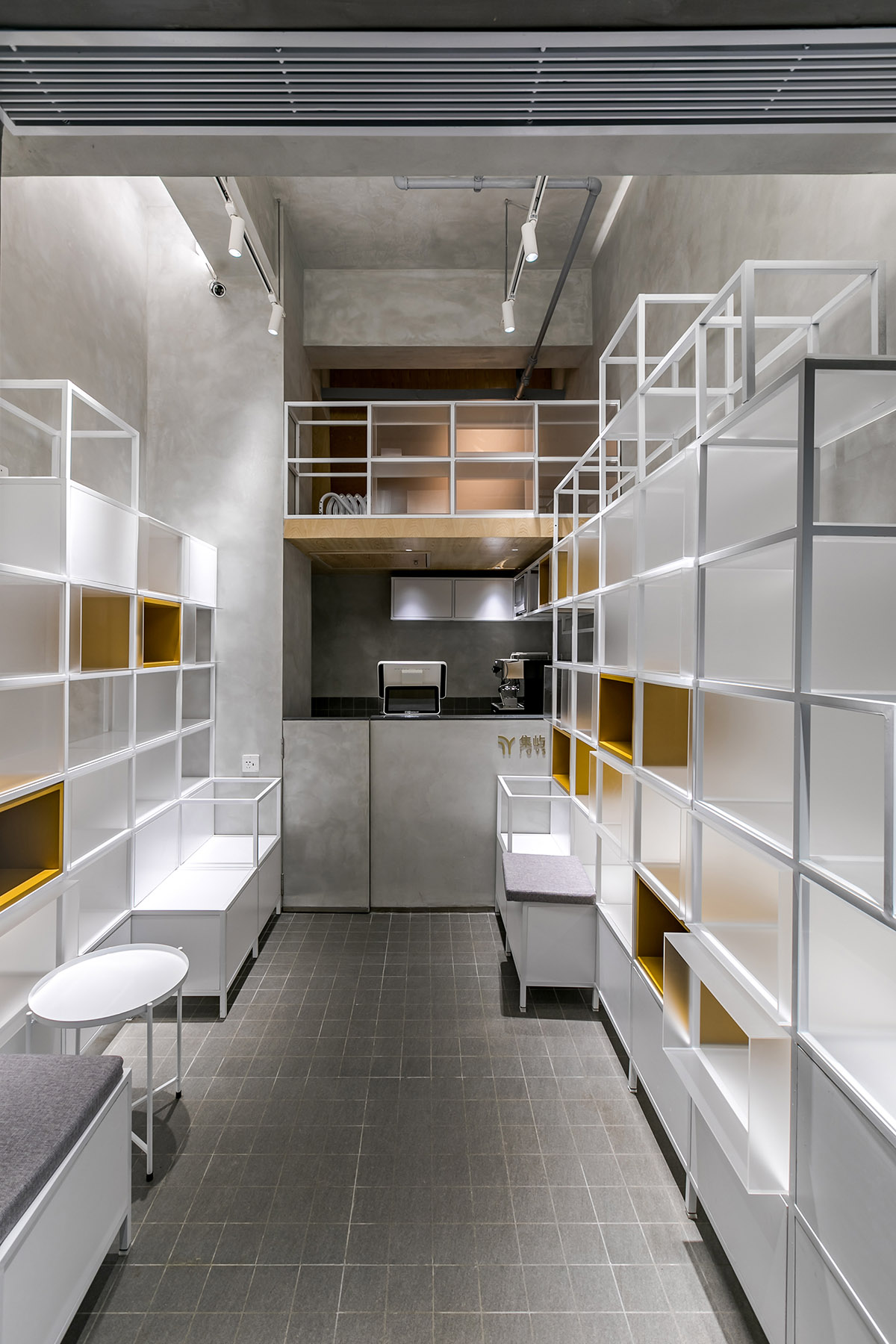 The curved suspended ceiling extends from the top of the glass door to the apex of the internal space. It mitigates the oppressive feeling in this cramped and high space and brings a sense of mystery and ritual to it as well.

Even when the door remains open, the studio can definitely feel that the ambience becomes more tranquil and warmer from the outside into the inside of the space. 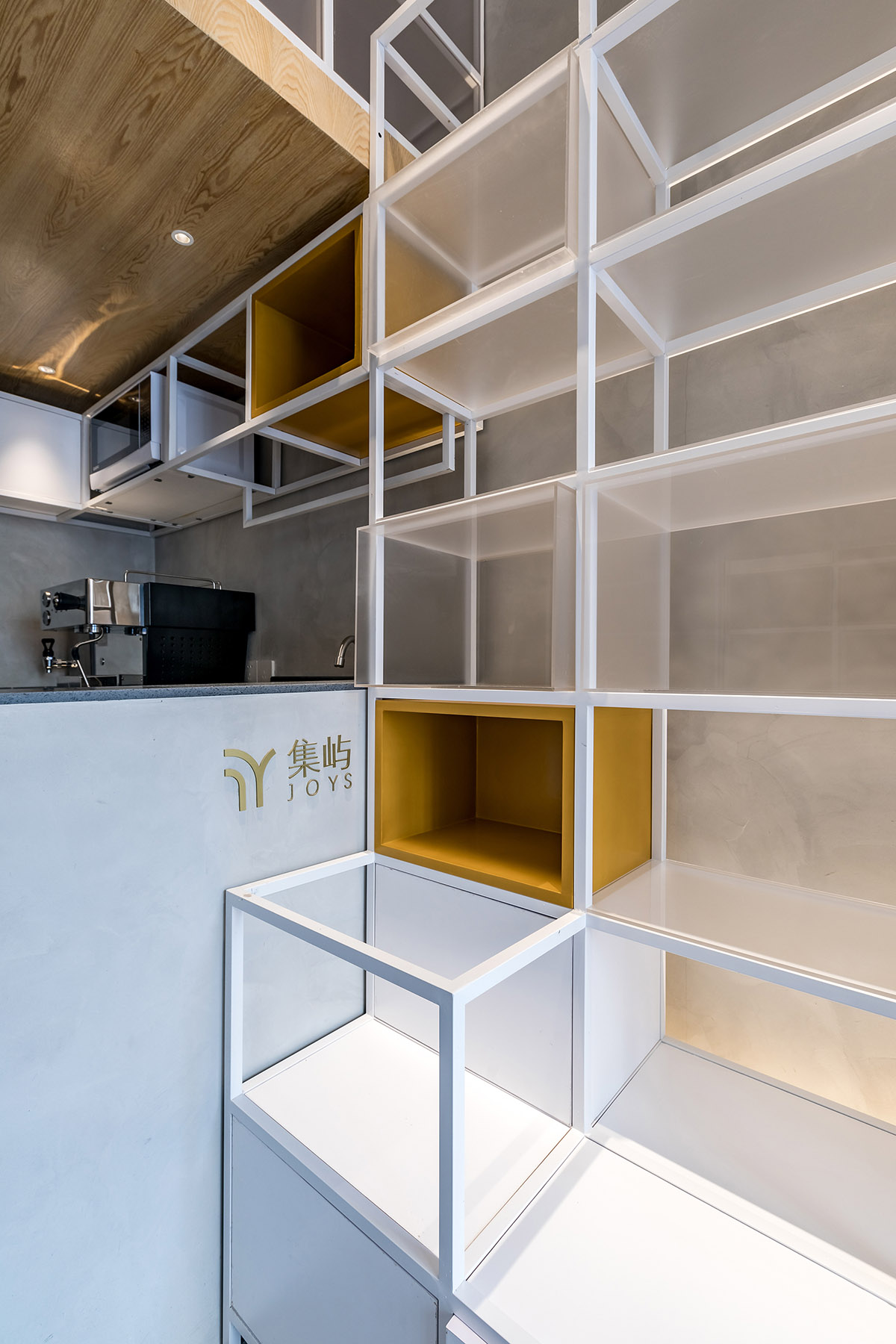 During construction, the warm-hearted neighbors would often offer us advice on design ideas, which we resisted initially, but gradually realized that raising opinions and keeping communication in such a symbiotic environment was significant.

"We believe at least that their participation is valuable. The wall on the right side of the entrance, which we call a spontaneous design, is a cooperative achievement of the neighbors and us," added the firm.

The eave is independent yet naturally "grown" from the whole structure. The sewing machine and the flower bed outside the entrance remain where they were. The order and interdependence of the old and new are well maintained.

"We paid several return visits to JOYS after it went into operation. The shop owner always served coffee and dessert in an orderly manner, welcoming the customers who rushed to occupy a seat near the entrance." 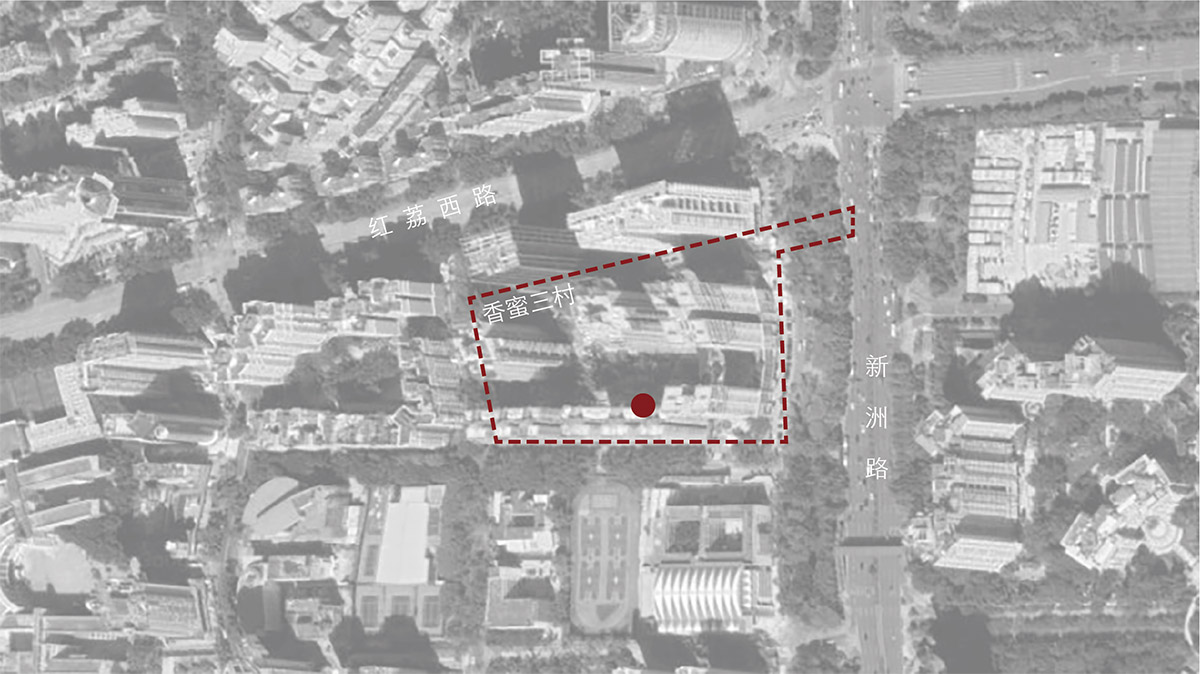 A key factor that determines the success or failure of this project lay in the in-depth study of the cross section. The studio not only worked to create more functions and storage space on the small-scale site, but also expected to improve daylighting.

The raised height of the entrance maximizes the penetration of sunlight into the interior, hence dramatically improving daylighting. The light box and the entrance form an abstract contrast of the convex and concave. Through the entrance design, we hoped to give JOYS a different image and make the light appear softer.

A high strip-like window was carved out on the facade, to bring in some daylight while maintaining the sense of tranquility of the interior space. As night falls, the indoor light penetrates it, making it an "eye" gazing at the city. 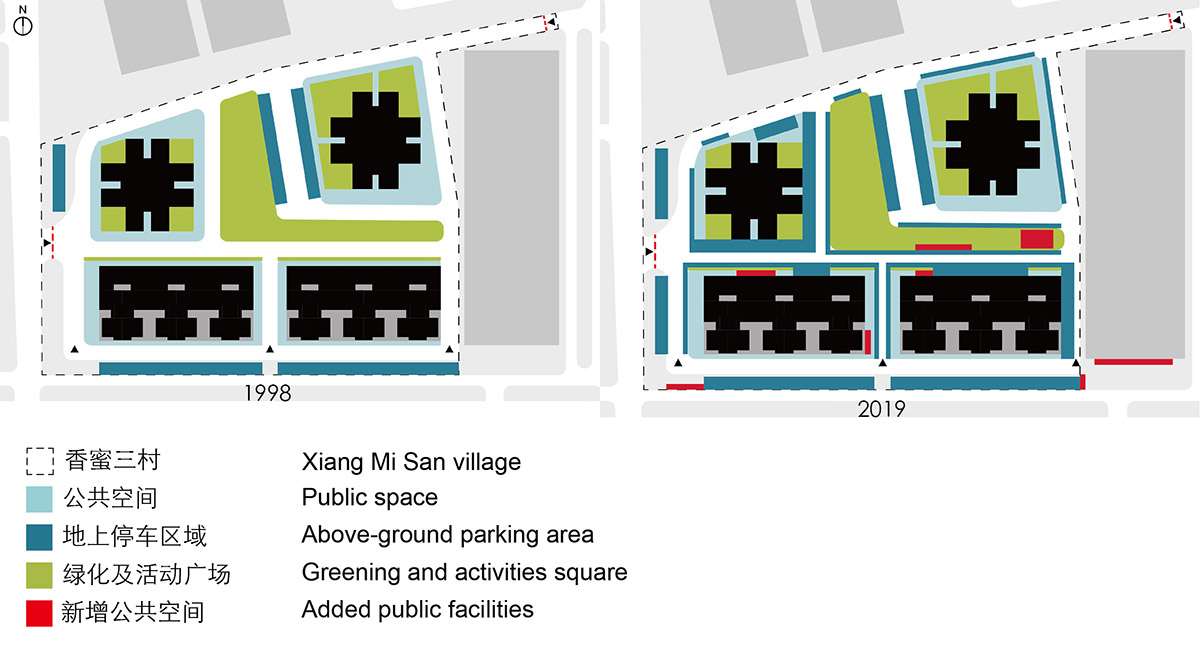 Recognition: the existence of the non-exist

The larger the LOGO is, the stronger the sense of identity it has. However, when the LOGO is minimized, will we not perceive the existence of the space? With this assumption, we tried to resort to atmosphere rather than exaggerated form to create identity and "a place of distinct character and meaning" mentioned by Christian Norberg Schulz. This should be JOYS' destiny and goal. 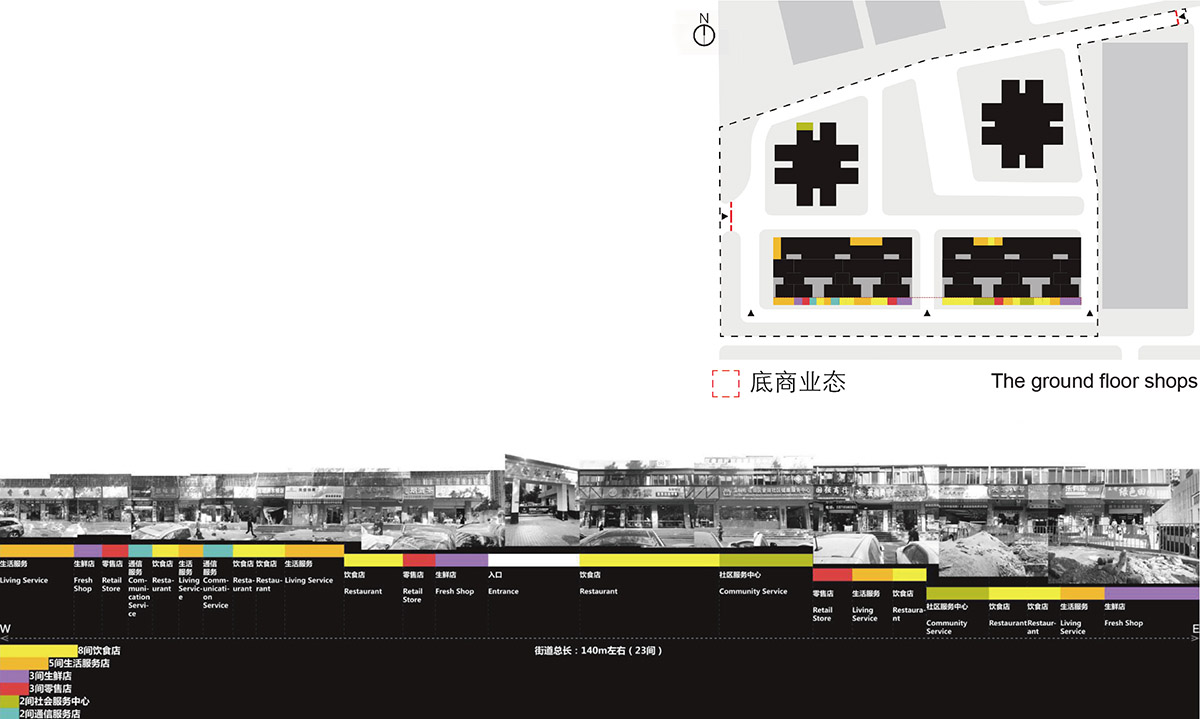 JOYS is an isolated "spiritual island" that doesn’t care about the hustle and bustle or the difference of the city. It's completely open yet closed; it provides service yet also cultivates the mind. Its perfect integration of functionality and spirit is based on the consensus and tacit mutual understanding between the client and our team.

At first glance, JOYS arouses people's curiosity to explore what this place is. The atmosphere becomes everything. It’s rooted here. It doesn't need to shout "I am here", yet people can understand. 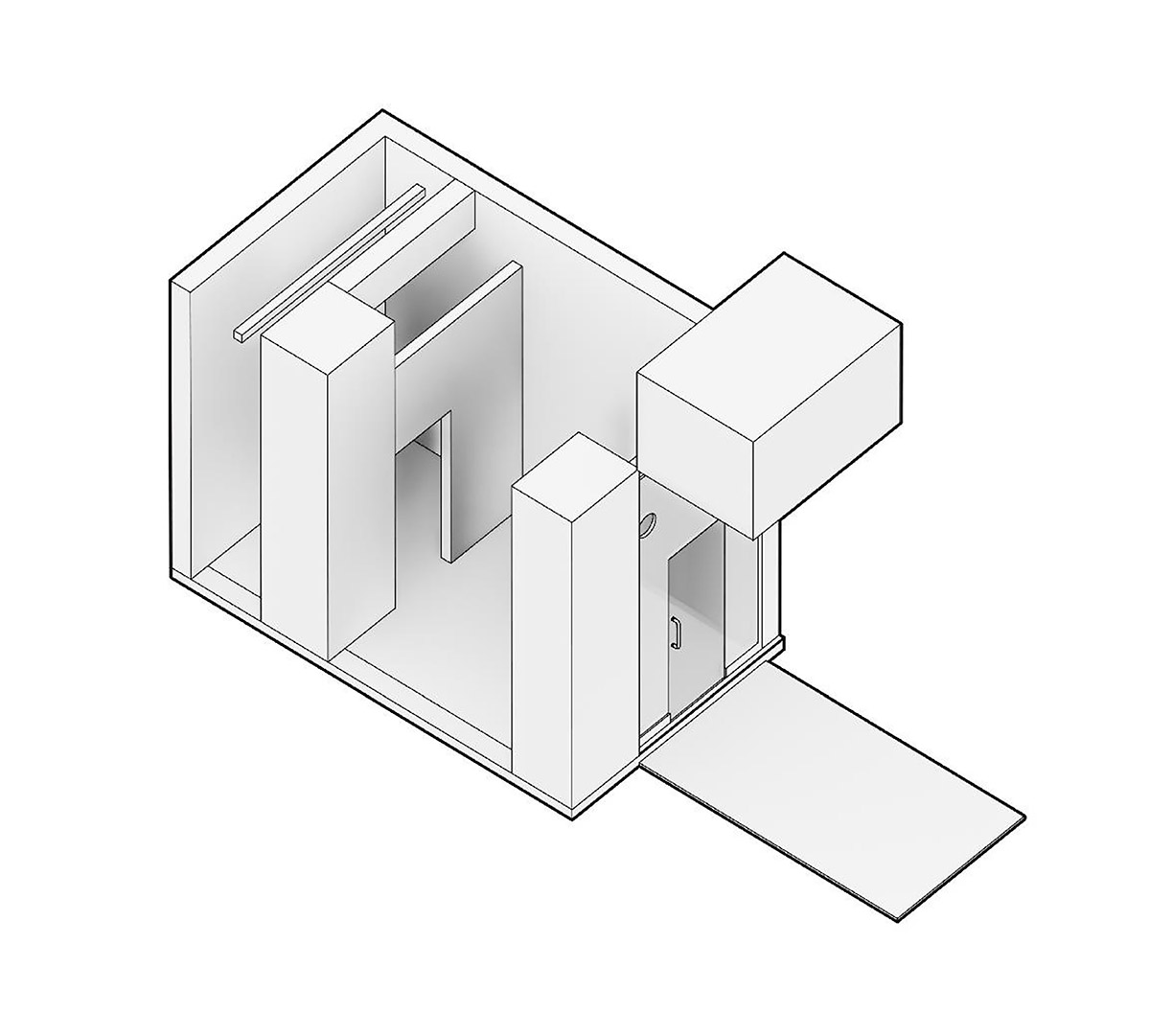 It's difficult to create precise experiences and leave proper moderate "blank" space within an area that is less than 2.6 meters wide. Thus, the studio resorted to the grid-like display racks to control the ups, downs and size of the field of view, hoping that each product is displayed independently.

There were several solutions for the cabinet form: one maximizing the utility of space; one adopting special materials, etc. The cabinet solution the studio finally chose has two important merits. Firstly, the cabinet is like an installation, full of flexibility. On the other hand, it leaves the upper half of the space empty, which helps "dissolve" the curved ceiling. This is a project that required every cent spent in what's really needed. Within the space, we set a holistic baking and coffee-making area as well as independent resting areas, while overcoming many other constraints. With a limited budget of 100,000 yuan, the architects took many measures to reduce cost and coordinate construction period, and at the same time worked to ensure the safety of the structure and the durability of materials.

For people in the neighborhood, JOYS has realized their imagination for good things. As urban spaces are becoming homogeneous, JOYS is not a genetic mutation, but a continuation of good memories of the client and the team. 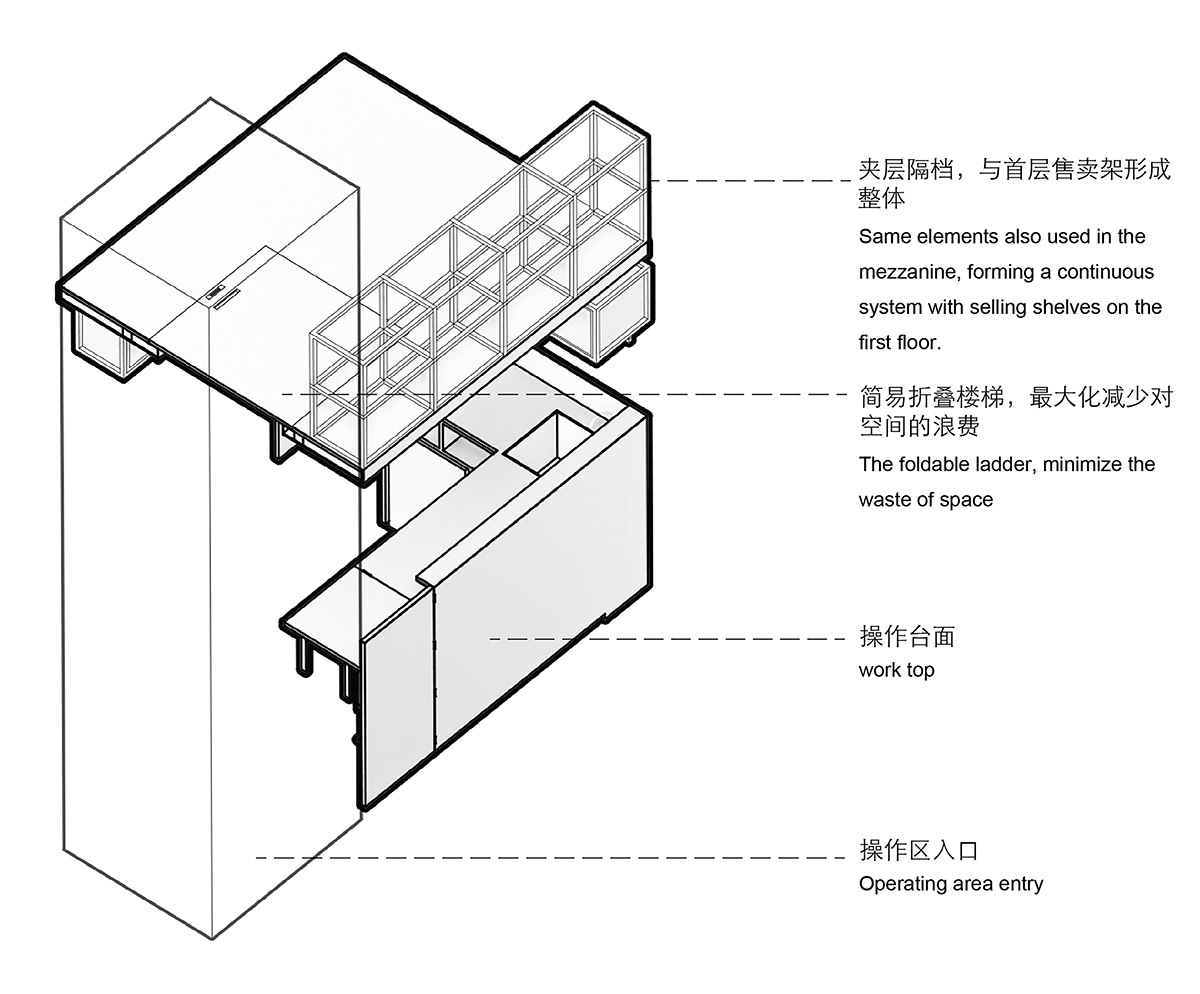 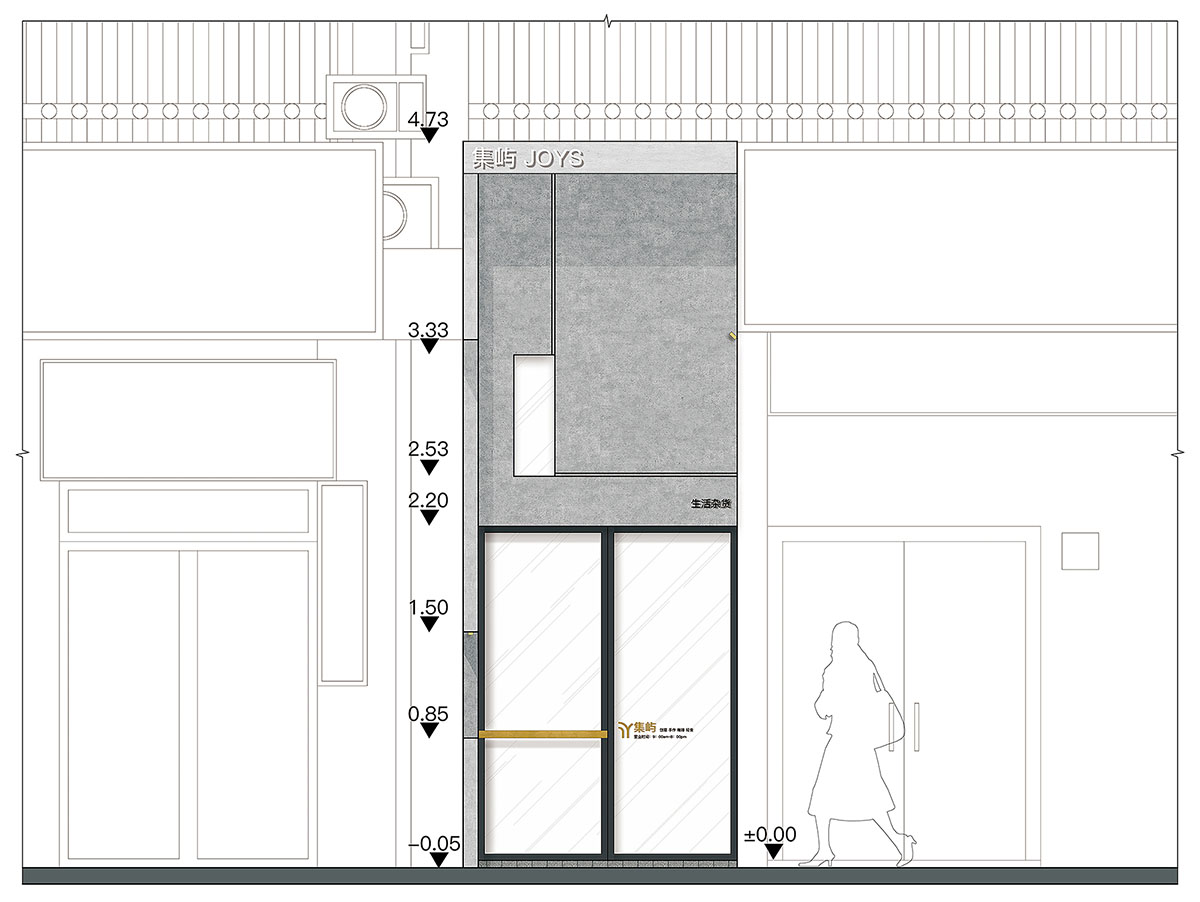 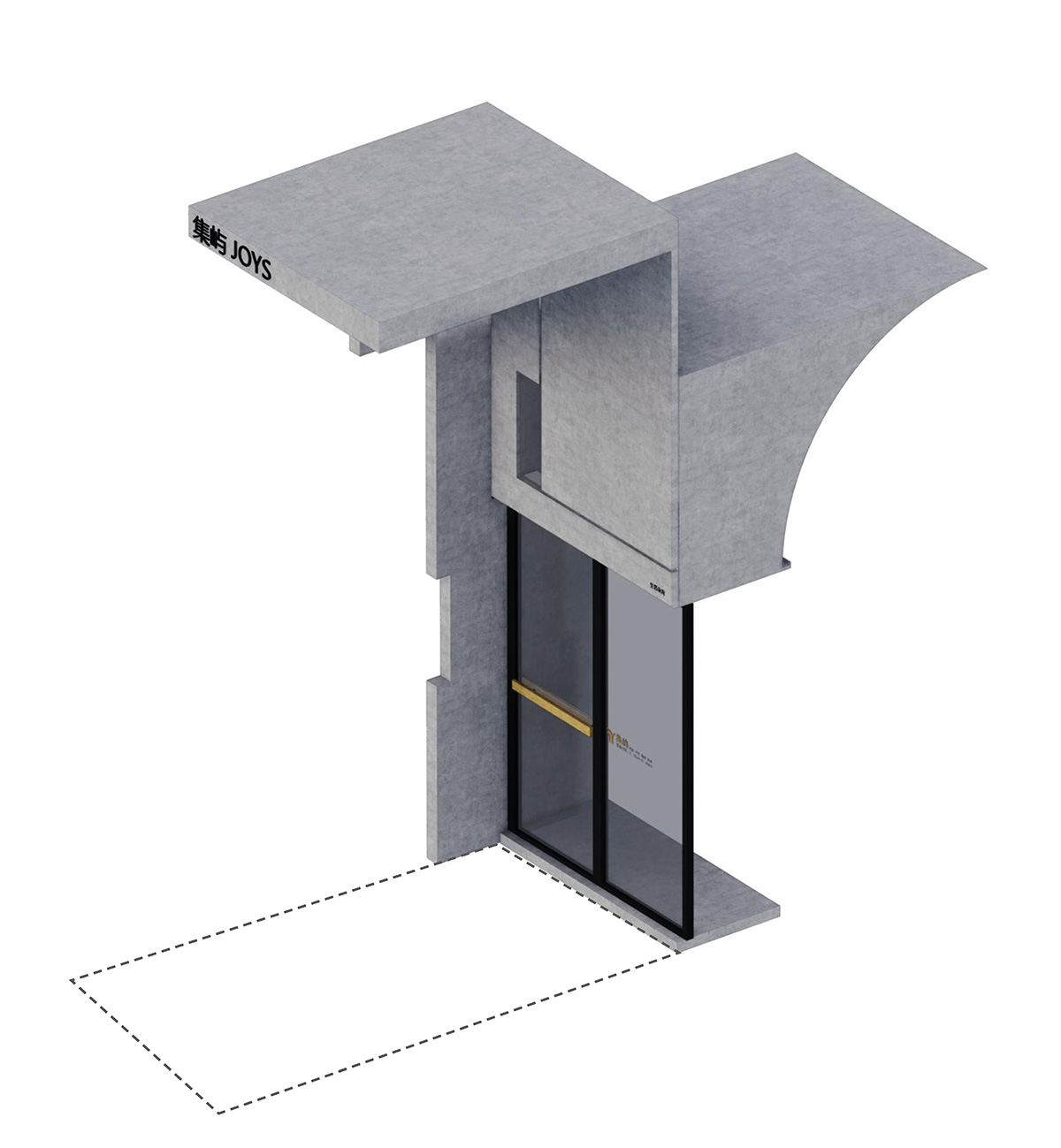