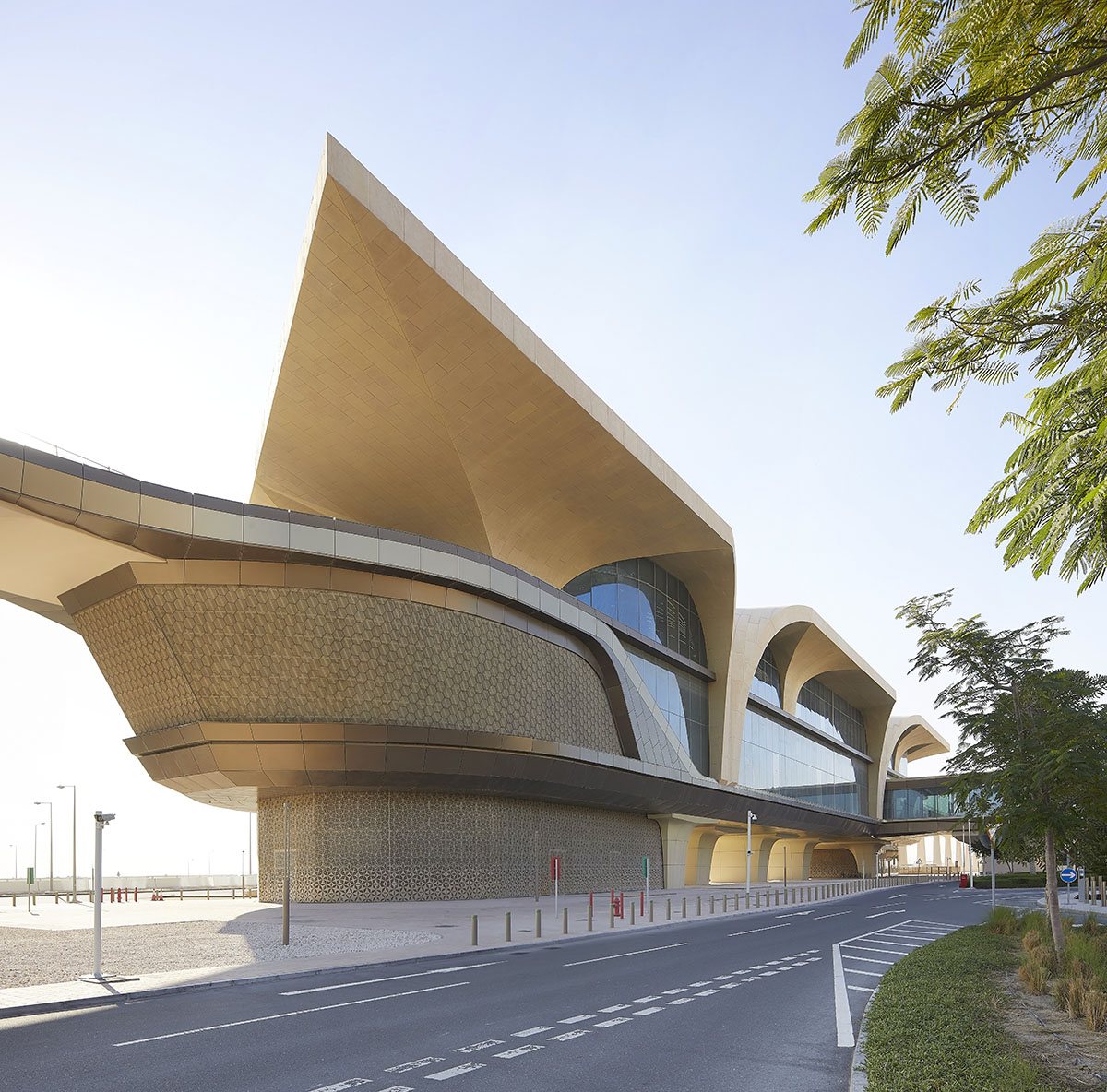 The architectural language of the stations is drawn with vaulted-like spaces, while the interior spaces create a radiant effect of movement and fluidity.

Designed for Qatar Railways, the first phase of the project was completed for one of the most advanced and fastest driverless metro systems in the world and phase one of the project involved the construction of three metro lines: Red, Green and Gold, with 37 stations. 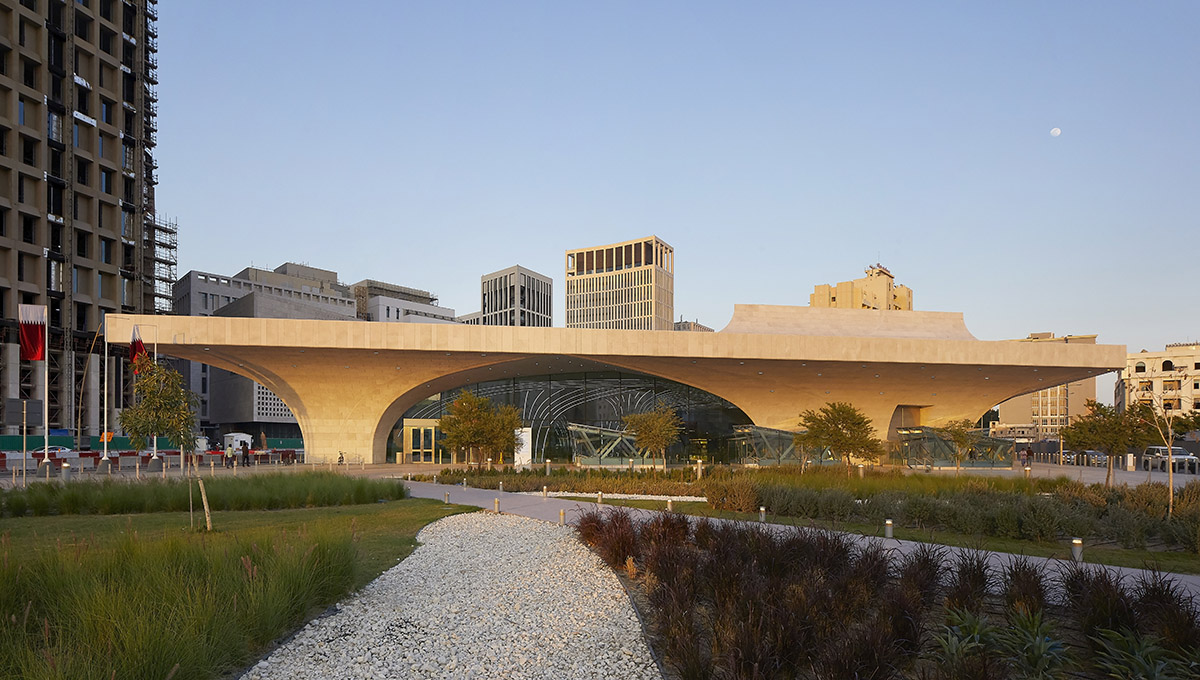 UNStudio created a vision for the station designs of the all-new Doha Metro Network, and collaborated with the Qatar Rail Architecture Department on the development of an "Architectural Branding Manual": an extensive set of design guidelines, architectural details and material outlines to assure the spatial quality and identity of the network.

This comprehensive design manual served as a set of guidelines that were used by the appointed D&B contractors to deliver the different station types for the first phase. 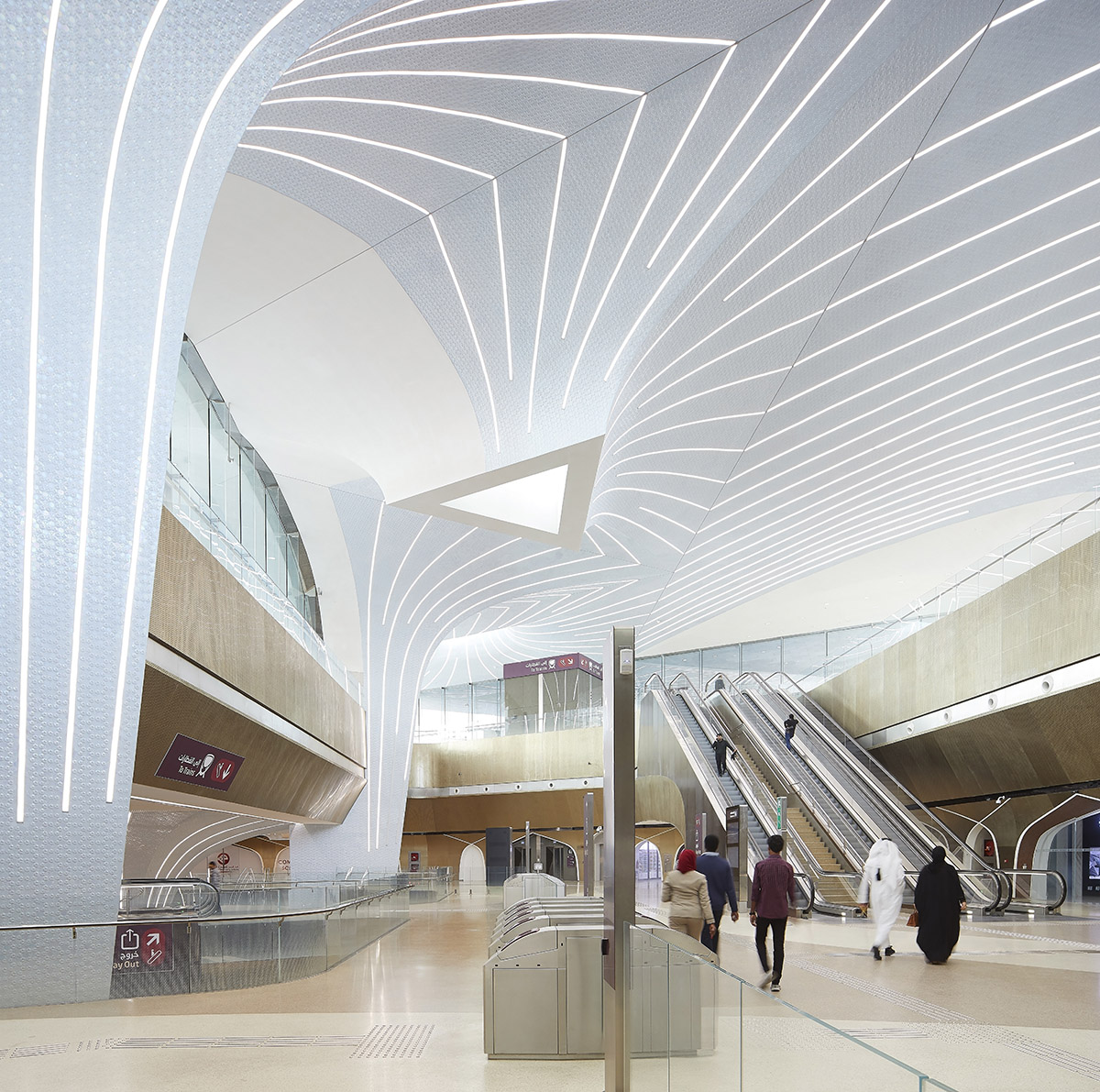 The design of the stations plays a key role in this endeavour, by making use of urban design principles to create public spaces that enhance the urban experience at the pedestrian scale and build new habits for the Doha community.

Furthermore, the creation of a strong station identity for the network creates instant recognition at busy road intersections and functions as a permanent reminder of the alternative to private transportation.

"We are going to move differently in the future. Mobility is changing fast, from the introduction of autonomous vehicles to urban cable cars and the Hyperloop. The mobility hubs of the future have to respond to and cater to these changes," said Ben van Berkel, co-founder of UNStudio.

"In order to encourage the use of more sustainable forms of transport, these stations not only have to ensure smooth passenger flows, but they need to truly appeal to the public; to be places they want to visit and return to." 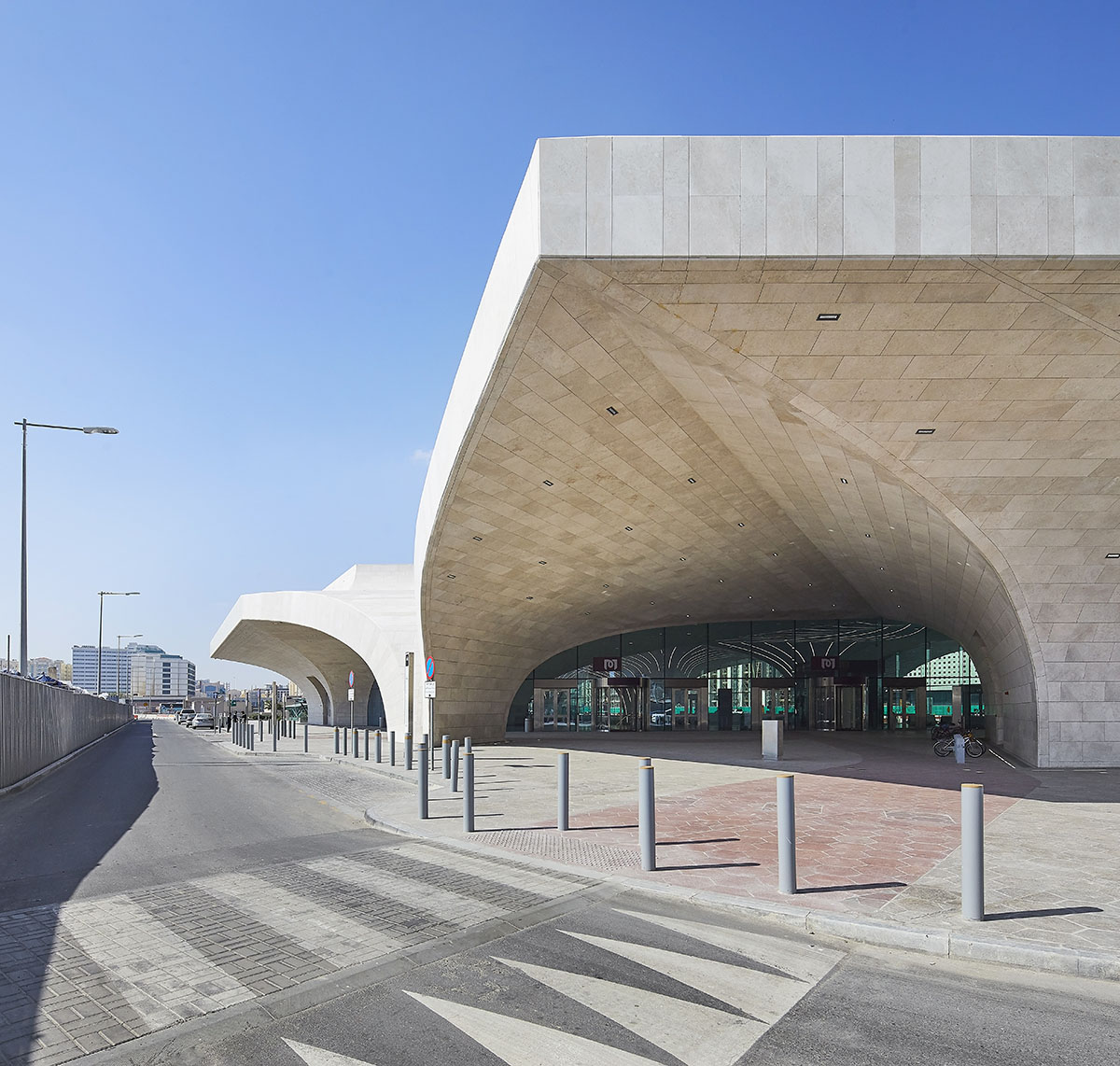 While the extensive coverage of the network will make movement within Doha comfortable and convenient, on the local level the new network also provides safe passage across busy road intersections that serve not only the metro users, but the population at large. 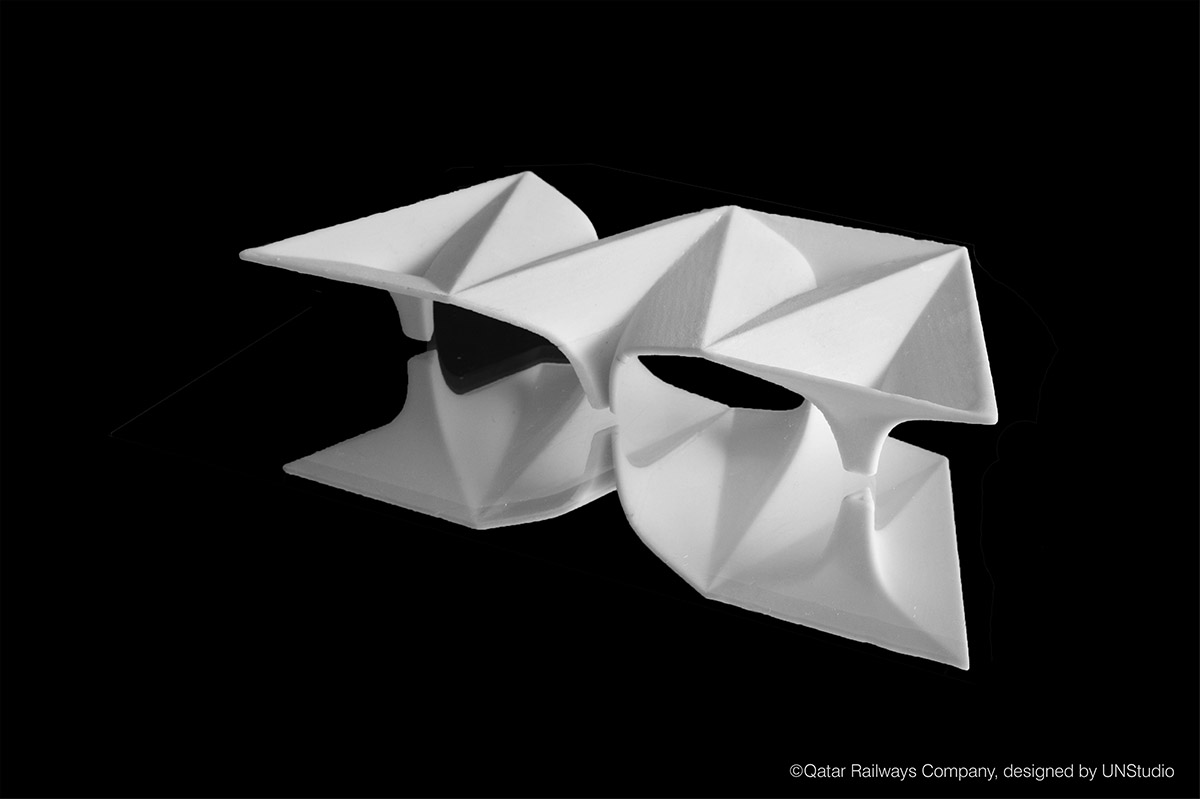 UNStudio's concept design for the Doha Metro stations forms a bridge between the past and the future of Qatar, drawing inspiration from the vast regional architectural lexicon, whilst simultaneously representing a vision of modernisation and preservation.

Referencing the notion of Caravanserais - which were inns with enclosed courts that served as gathering and resting places on ancient trade routes - and following in the lineage of historic train palaces, the design generates social interaction and propagates place creation over space creation. 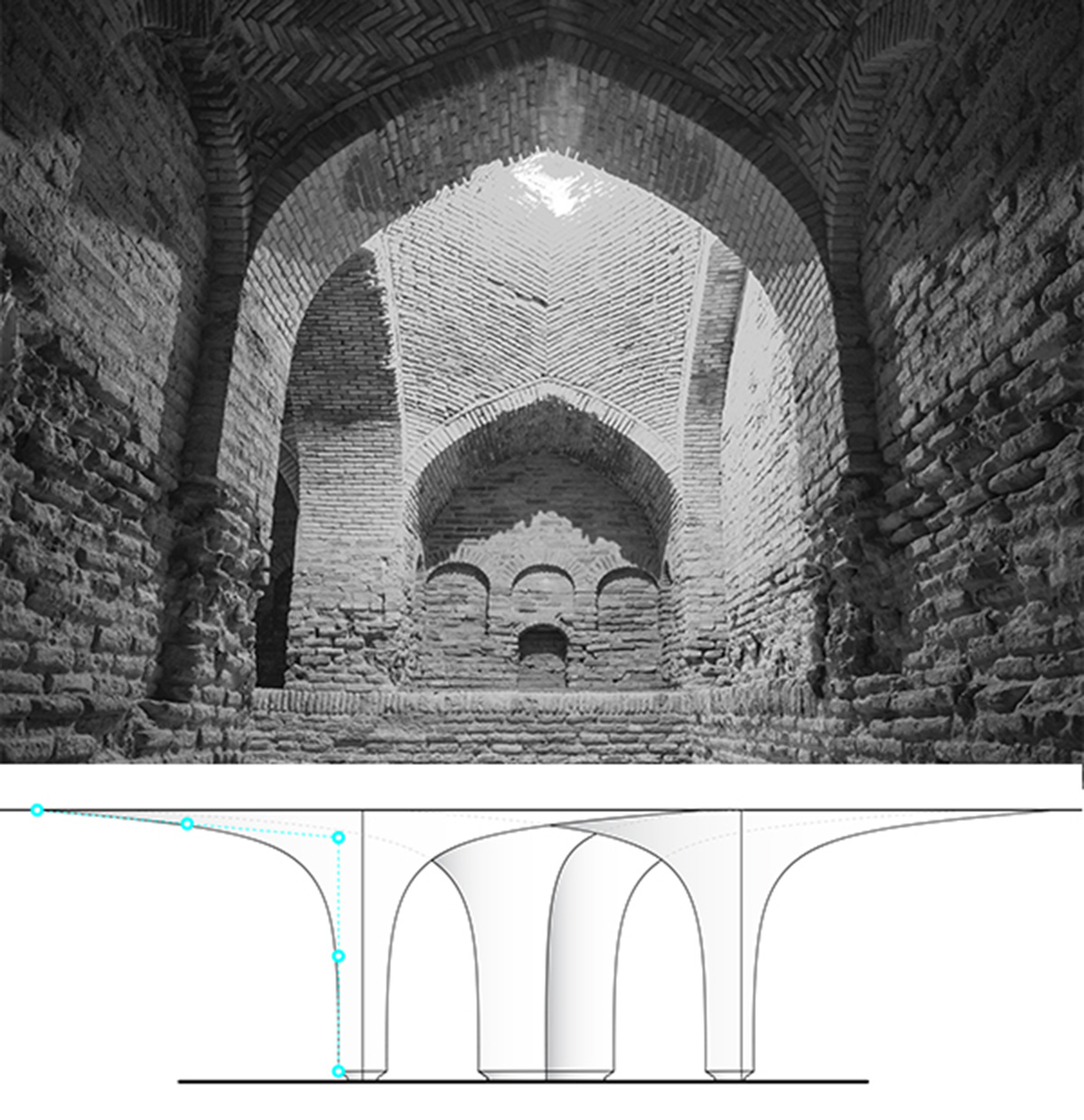 Drawing inspiration from the arch, expressions of traditional architecture, the lightness of the dhow sail, and the tensile profiles of nomadic tents, the 'Vaulted Spaces' design proposes a contemporary approach to the interpretation and structural implementation of these references. 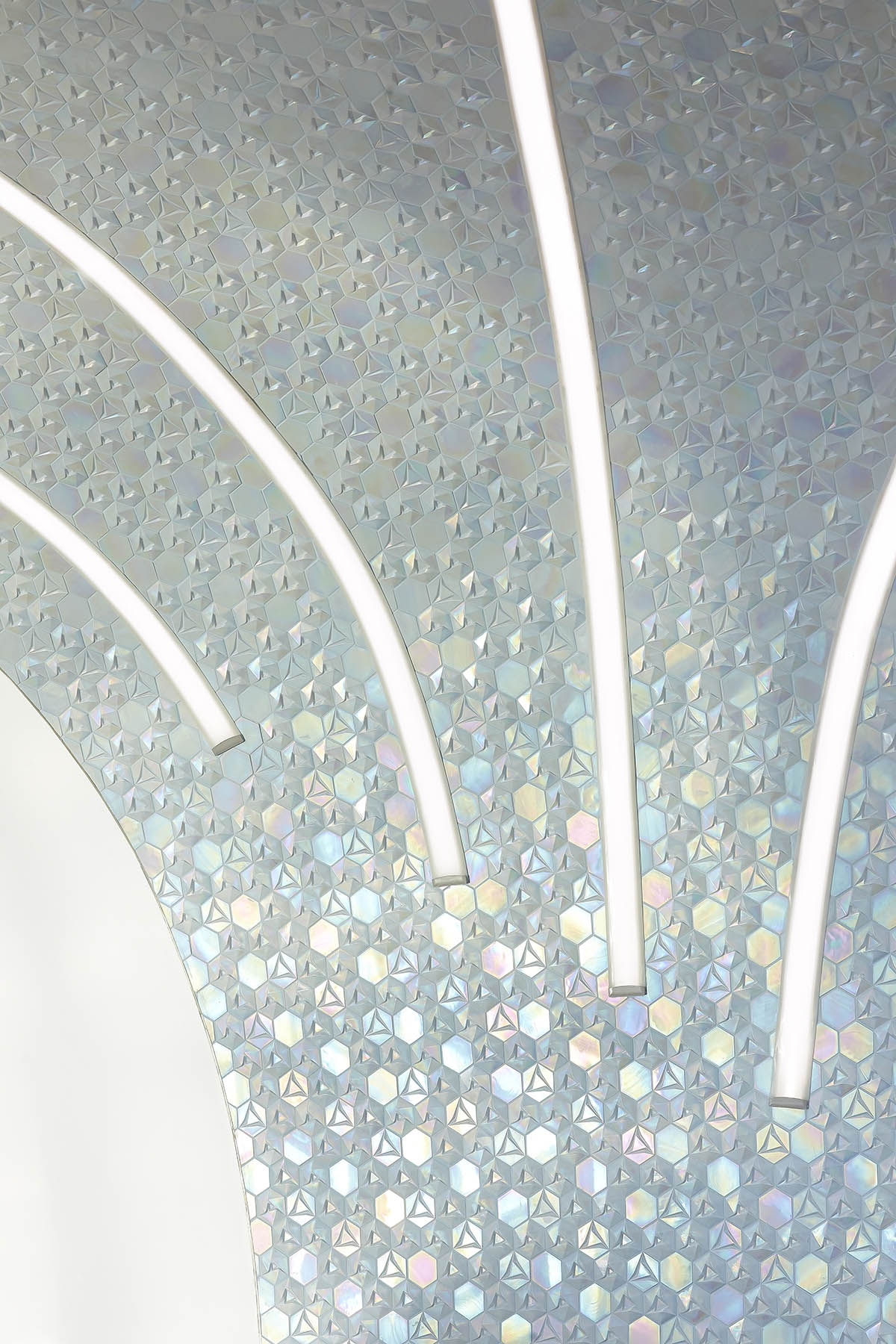 The materialisation principles are experienced through a duality of a pure, modest exterior versus a rich, illuminated mother of pearl effect interior. 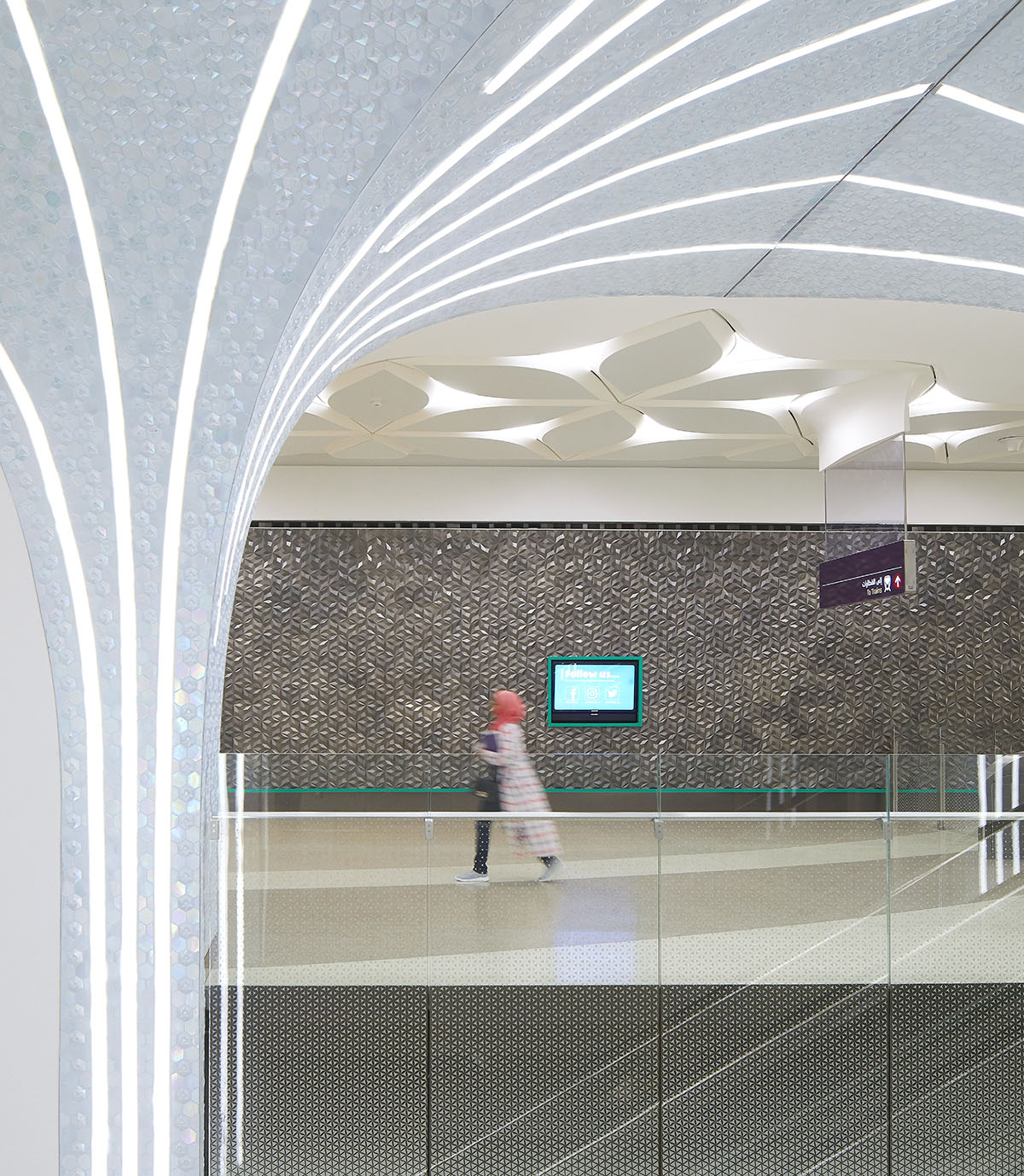 The use of this uniquely Qatari ornamentation and material palette assists in dividing the large interior spaces and guiding pedestrians towards the transient spaces. The integrated light lines amplify the experience, function as natural wayfinding elements and contribute to a unique ambience for the Metro Network.

"The celebration of arriving and departing has always been found in the design of stations. For the Doha Metro Network we devised an adaptive parametric system which creates open, light and welcoming interiors for each of the individual stations," Ben van Berkel added.

"Traditional Qatari architectural features are reinterpreted to incorporate new, transformative qualities which capture daylight and direct this into the interiors, creating uplifting and luminous atmospheres." 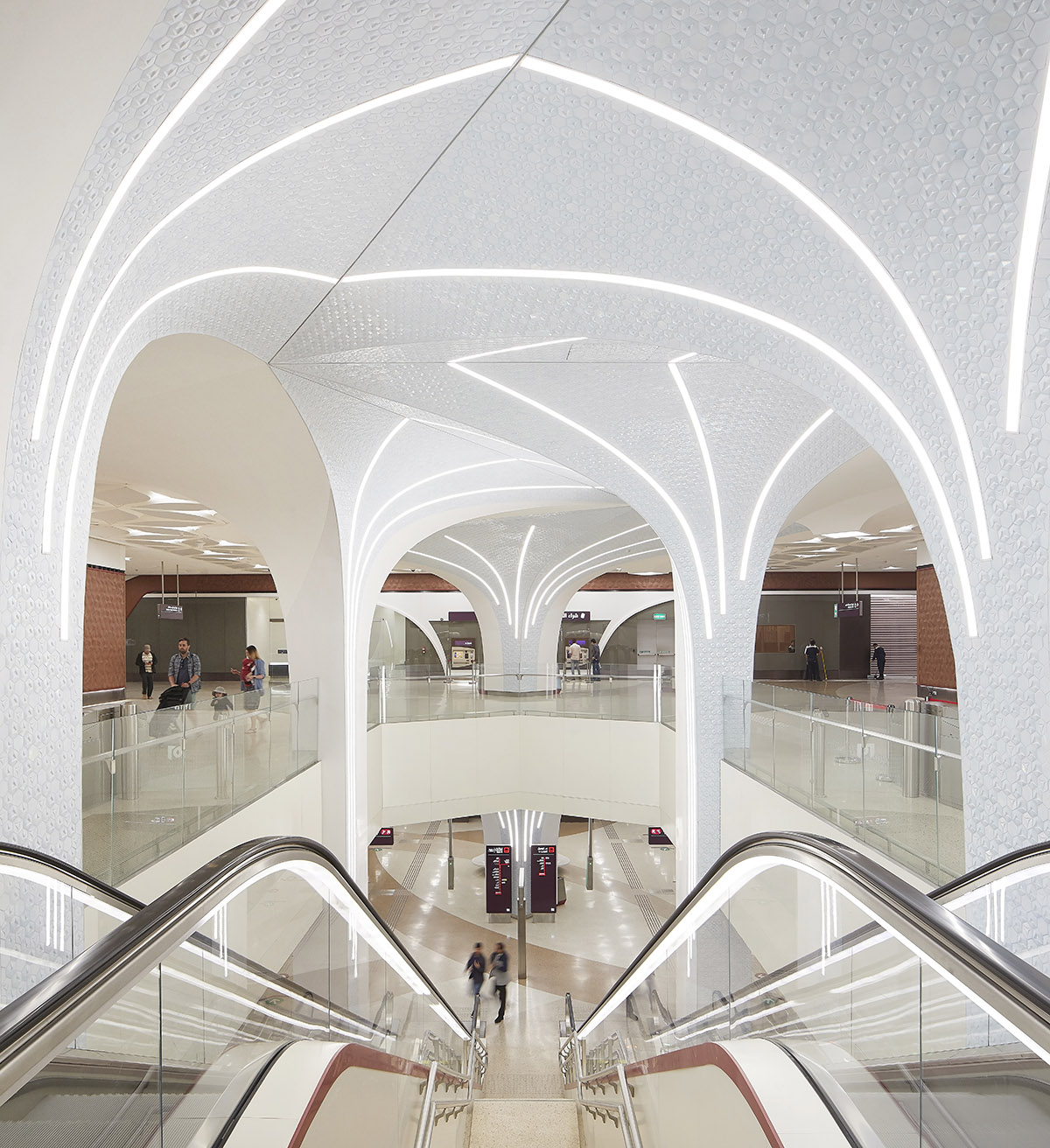 With flexibility as a design and planning objective, a comprehensive Architectural Branding Manual was produced to enable the efficient design and construction of the different station types. Using a large catalogue of architectural 'branding' elements, the design represents a flexible new architectural system which adapts itself to the scalar challenges of the Metro Network.

"Through the production of a design manual and with the use of adaptive parametric design, it has been possible to create a design with many variants, yet one which maintains a coherent identity throughout all of the stations. In this way, we can combine local contextual differences within an overall identity and parametrically adapt physical factors such as wayfinding, daylight penetration, passenger flows, constructive elements etc. in a complex but extremely disciplined system," continued Ben van Berkel. 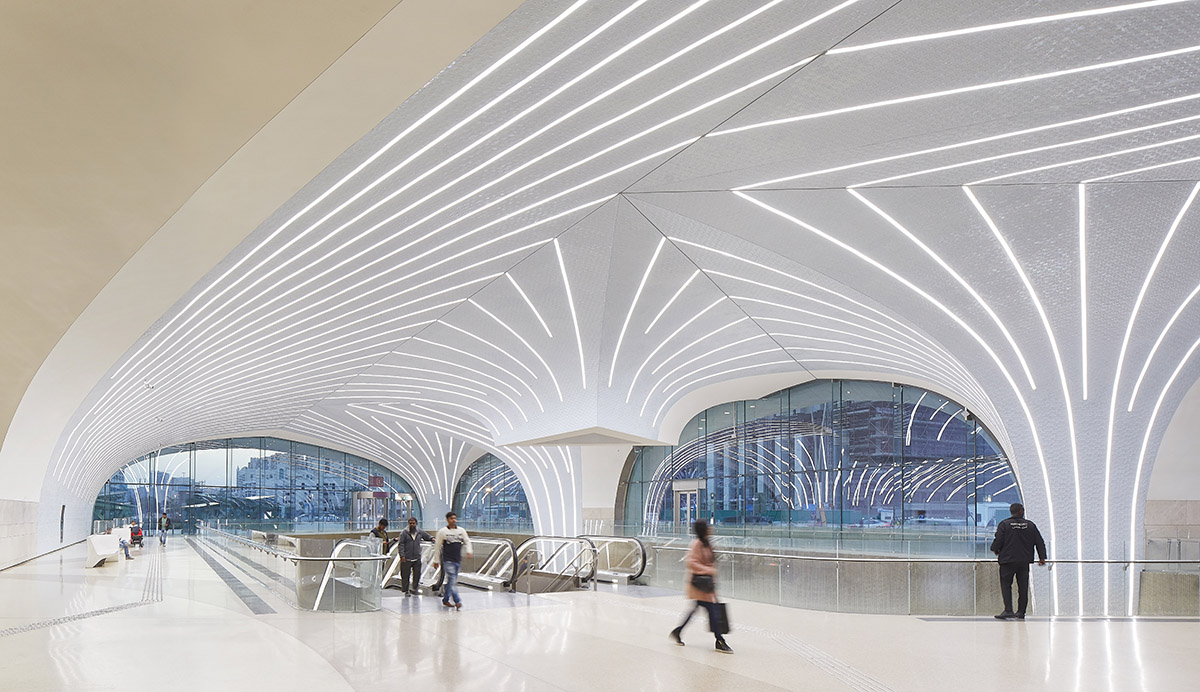 Through a system of interconnected triangular base forms, the massing of the geometry adapts and transforms to incorporate programmatic functions and to connect interior spaces with exterior urban infrastructure.

A key concept within the design is one of creating varying scales of identity for the user: network identity, line identity and station identity.

The design further incorporates and integrates all functional and technical aspects of the stations and network into a coherent architectural expression with a view to making the Qatar Rail Metro Network a world reference in the service provided by public transportation to the users and to the environment. 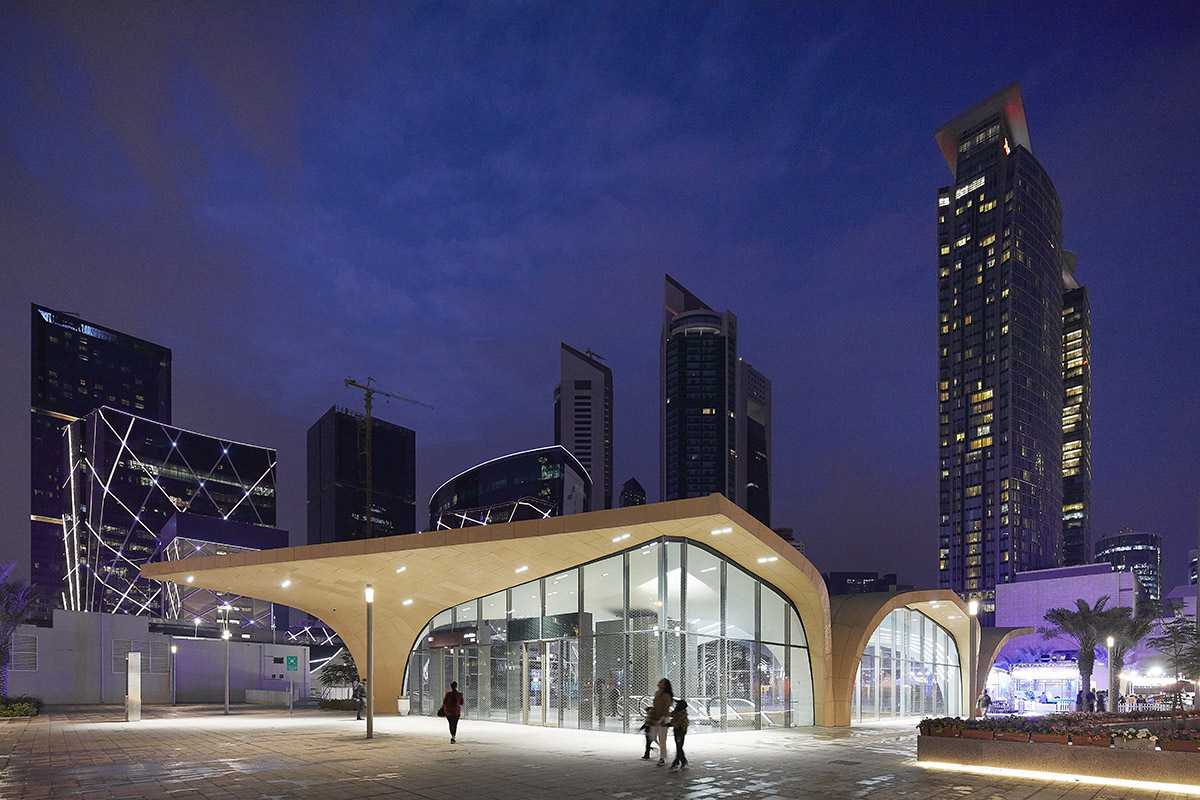 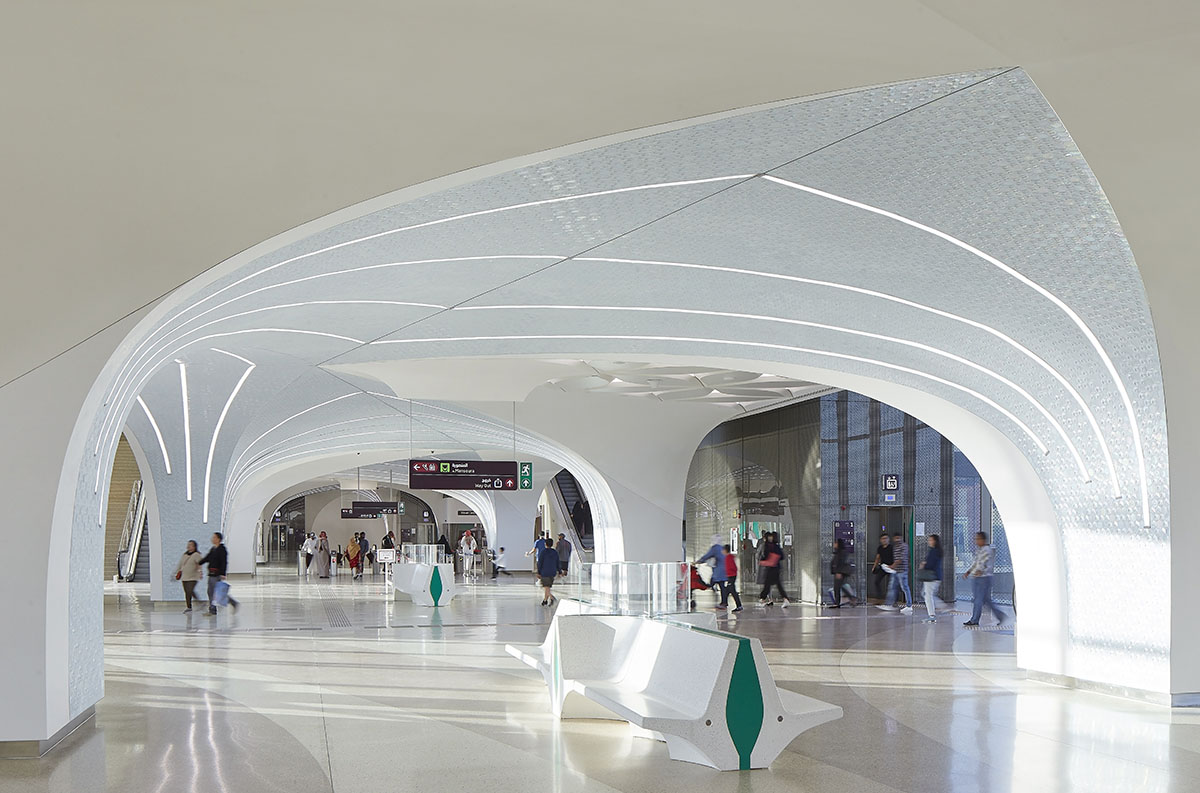 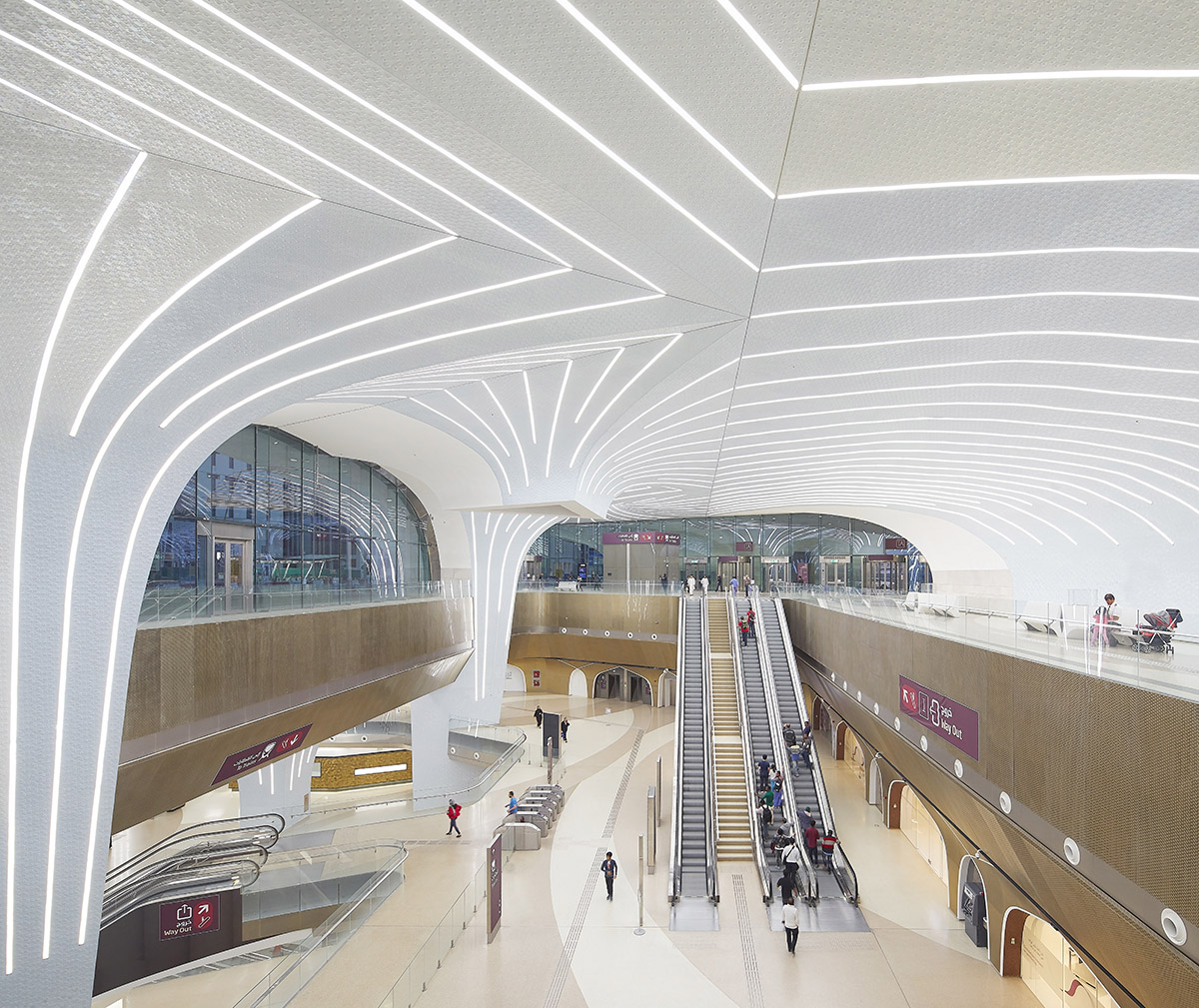 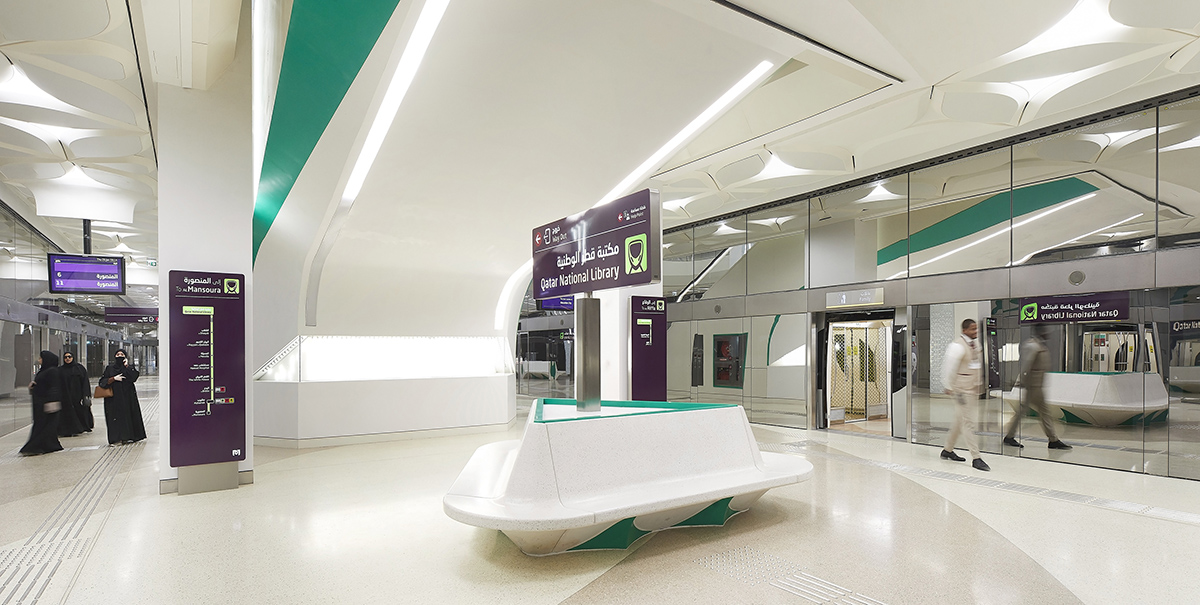 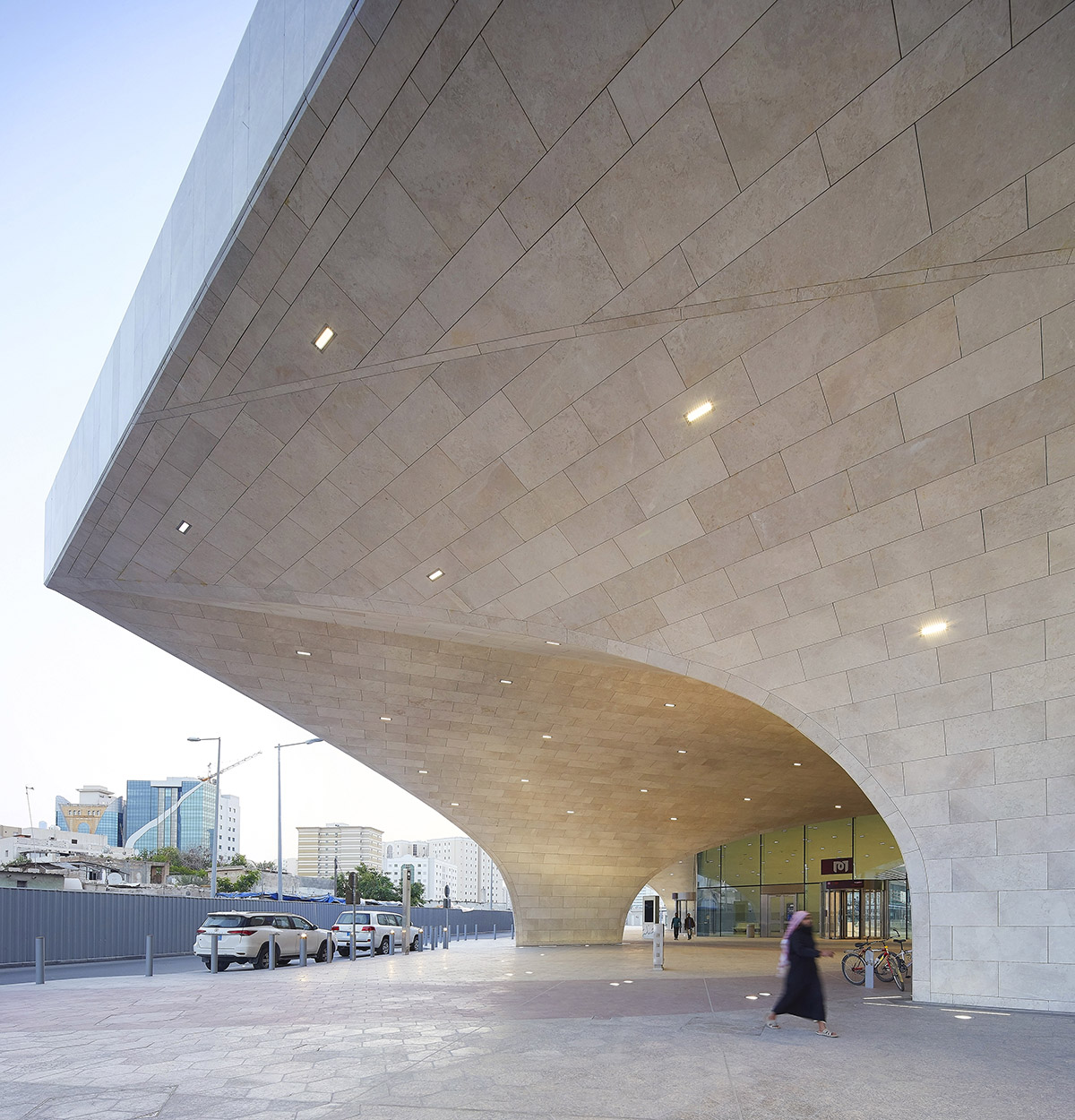 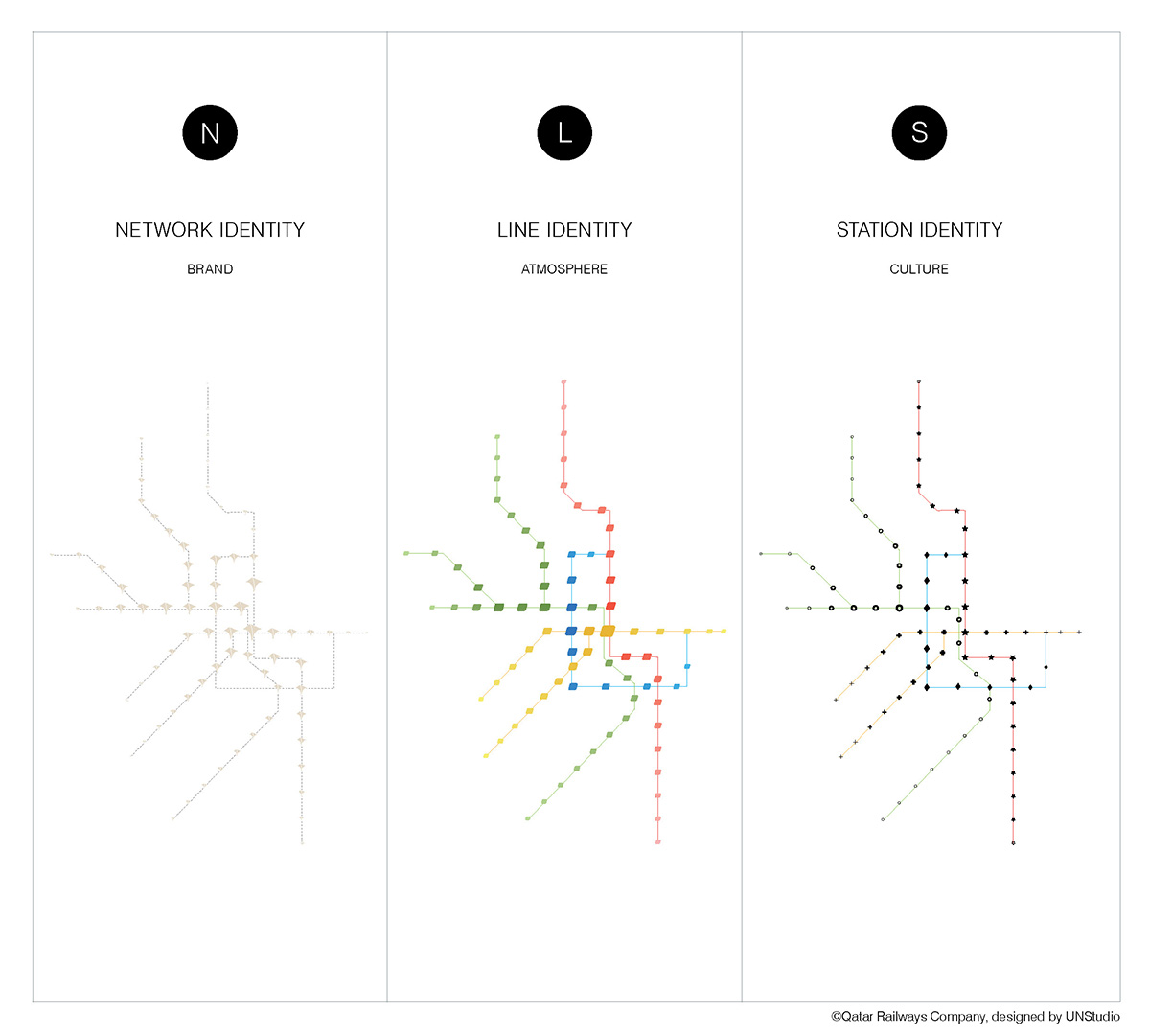 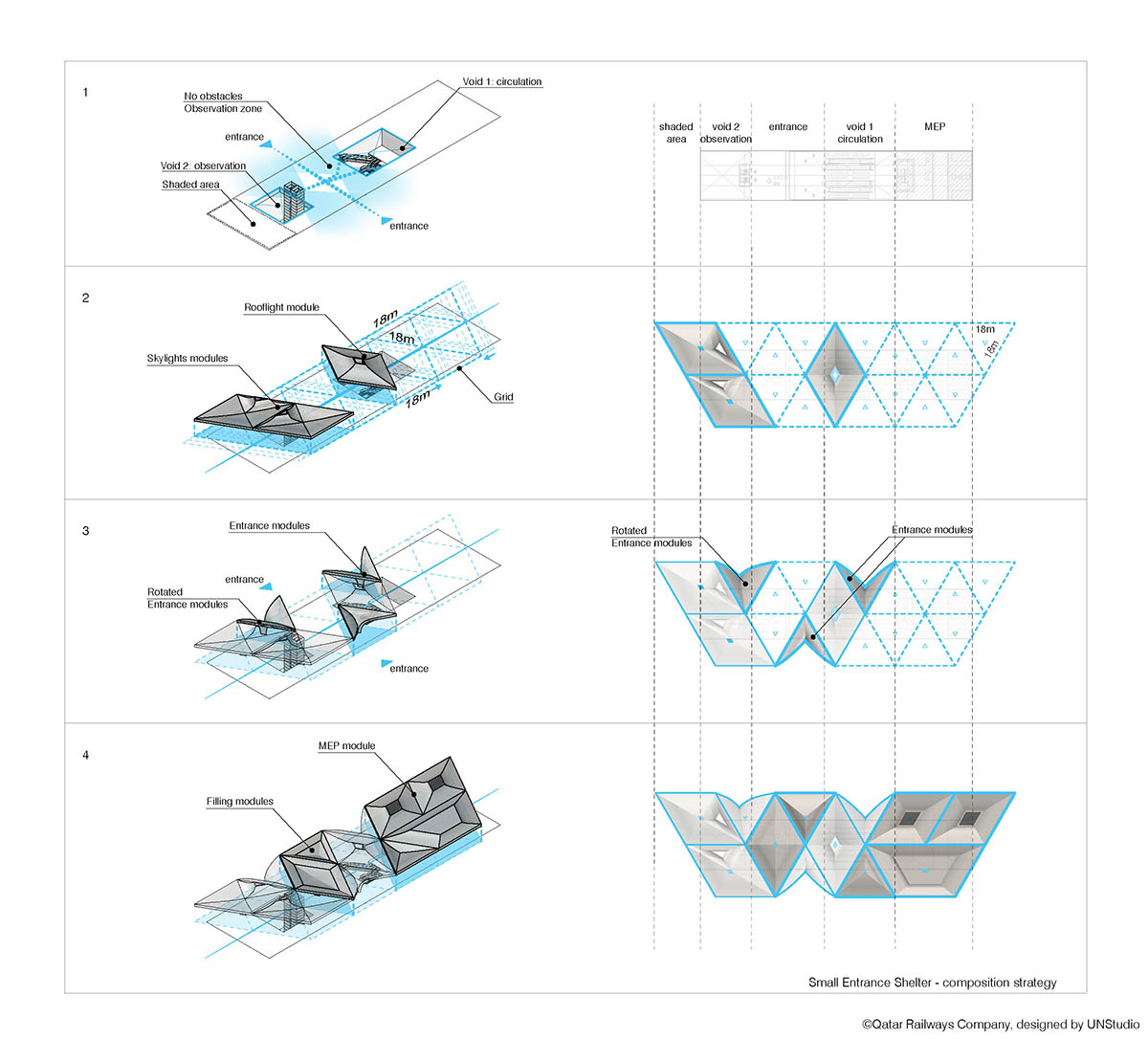 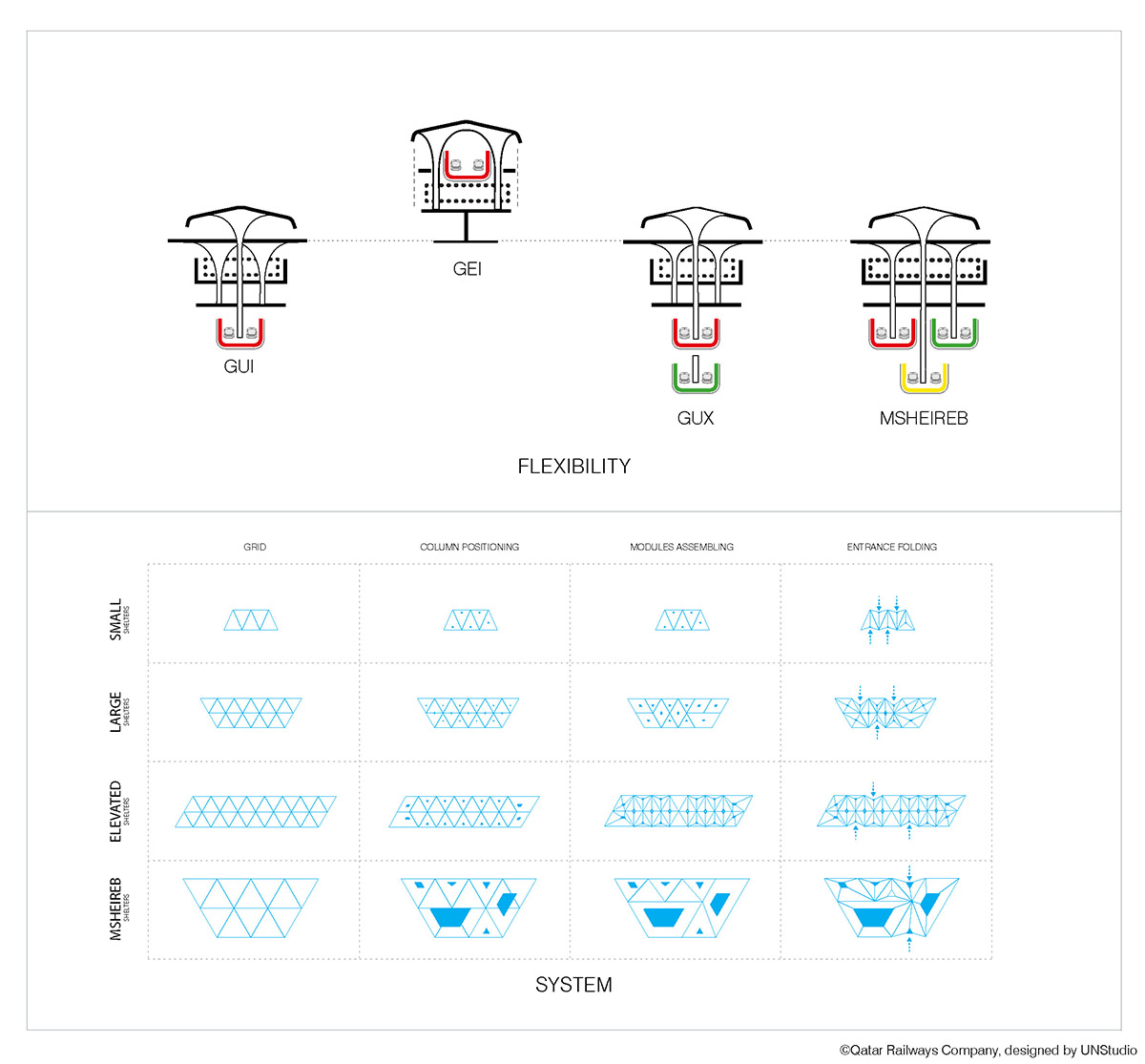