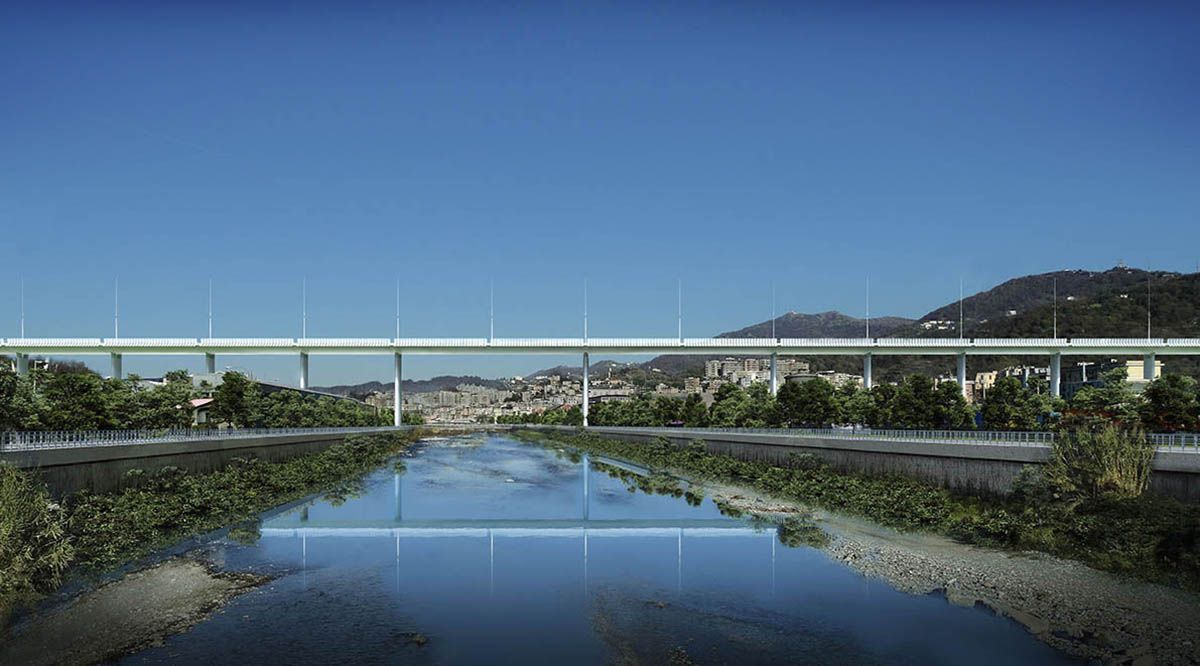 Renzo Piano's Genoa San Giorgio Bridge, which was designed to replace the Morandi Bridge, has been inaugurated in Genoa, Italy.

The 1,100-metre-long bridge was constructed in 420 days after the bridge collapsed on August 14, 2018 during heavy rainfall and resulted in the death of 43 people.

Officially open on August 4, the Italian prime minister Giuseppe Conte inaugurated the bridge in Piano's hometown Genoa. After the collapse, Piano had said he would help to rebuild the Morandi Bridge.

The Genoa San Giorgio Bridge crosses over the anthropised area of Val Polcevera and the Polcevera river, Renzo Piano described the viaduct as an “urban bridge”. 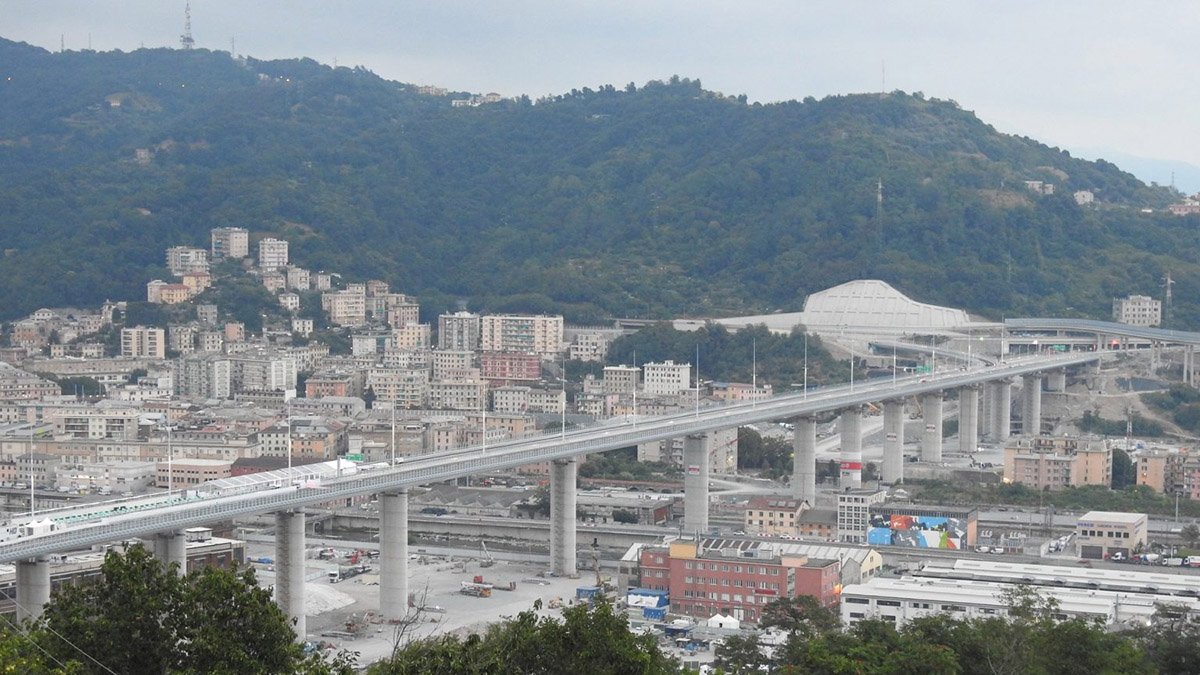 "This condition has characterised the design, ensuring that it is in tune not only with the infrastructure itself, but also with the strong relationship with the surrounding area," said Piano's firm Renzo Piano Building Workshop.

As the studio highlights, the bridge's rapid reconstruction intends "to become a model for the renovation and adaptation of Italian infrastructure with a high social, economic and strategic significance."

The bridge has 30-metre width and is supported by 18 reinforced concrete piers, which has spacing 50 meters in between, except for the three central spans that, crossing the Polcevera stream and the railway areas, have a pitch of 100 metres. 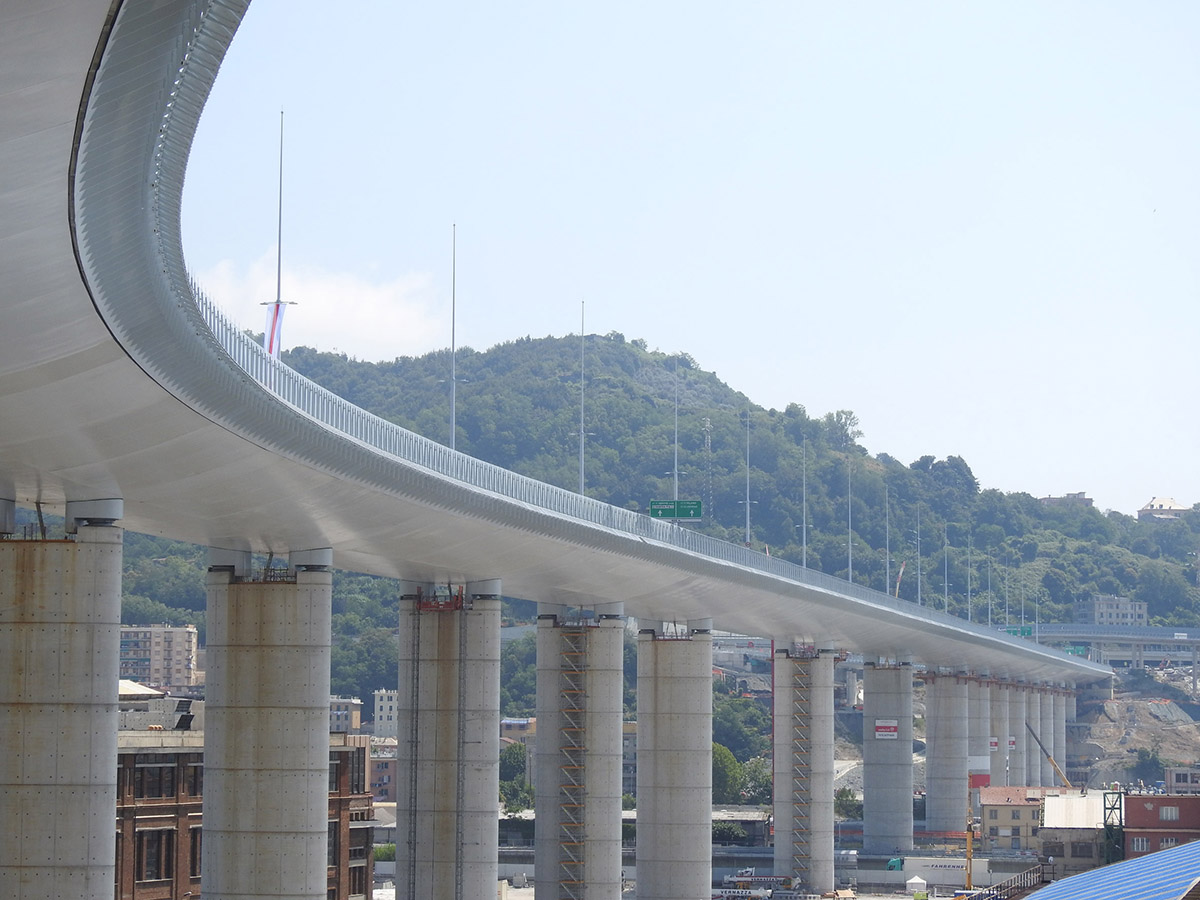 The shape of the piers was designed in an elliptical form (measuring section of 4 metres by 9.5 metres) allowing the light to "slip" on the surface, thus mitigating the visual impact and presence in the urban context of the new piers.

"The arrangement of the piers is the result of an architectural choice aimed at the use of more frequent but streamlined elements that fit best in an uneven urban fabric," added RPBW.

"From a structural and seismic point of view, the deck is "isolated" from the piers through the use of support devices that allow the bridge to "breathe" without there being any influence on its stability and strength." 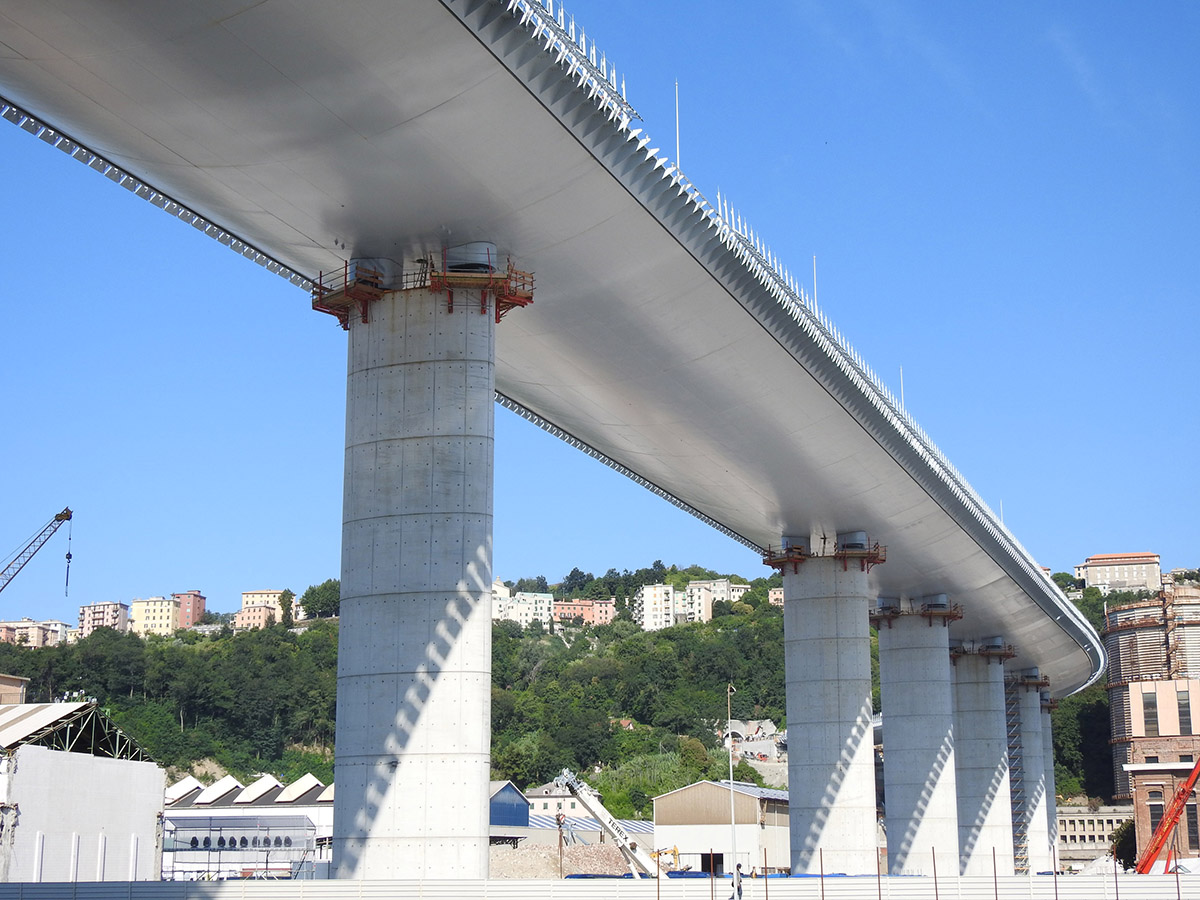 "This approach has made it possible to optimise structures, substructures and, in particular, foundations, limiting their size in a highly urbanised context."

"From an architectural point of view, the form described by the deck, which recalls the hull of a ship, is of great importance."

"The gradual reduction of the section towards the ends of the bridge attenuates the visual impact of the new infrastructure. In addition, the use of a light colour for the coating of the steel elements makes the bridge bright, harmonising its presence in the landscape," the firm continued.

According to the site's features, there was a need to reconnect the existing road branches - on the west side, the Coronata tunnels and, on the east side, from the junctions towards the A7 motorway - was the basis for tracing the roads of the new bridge and the new westbound entry ramp. 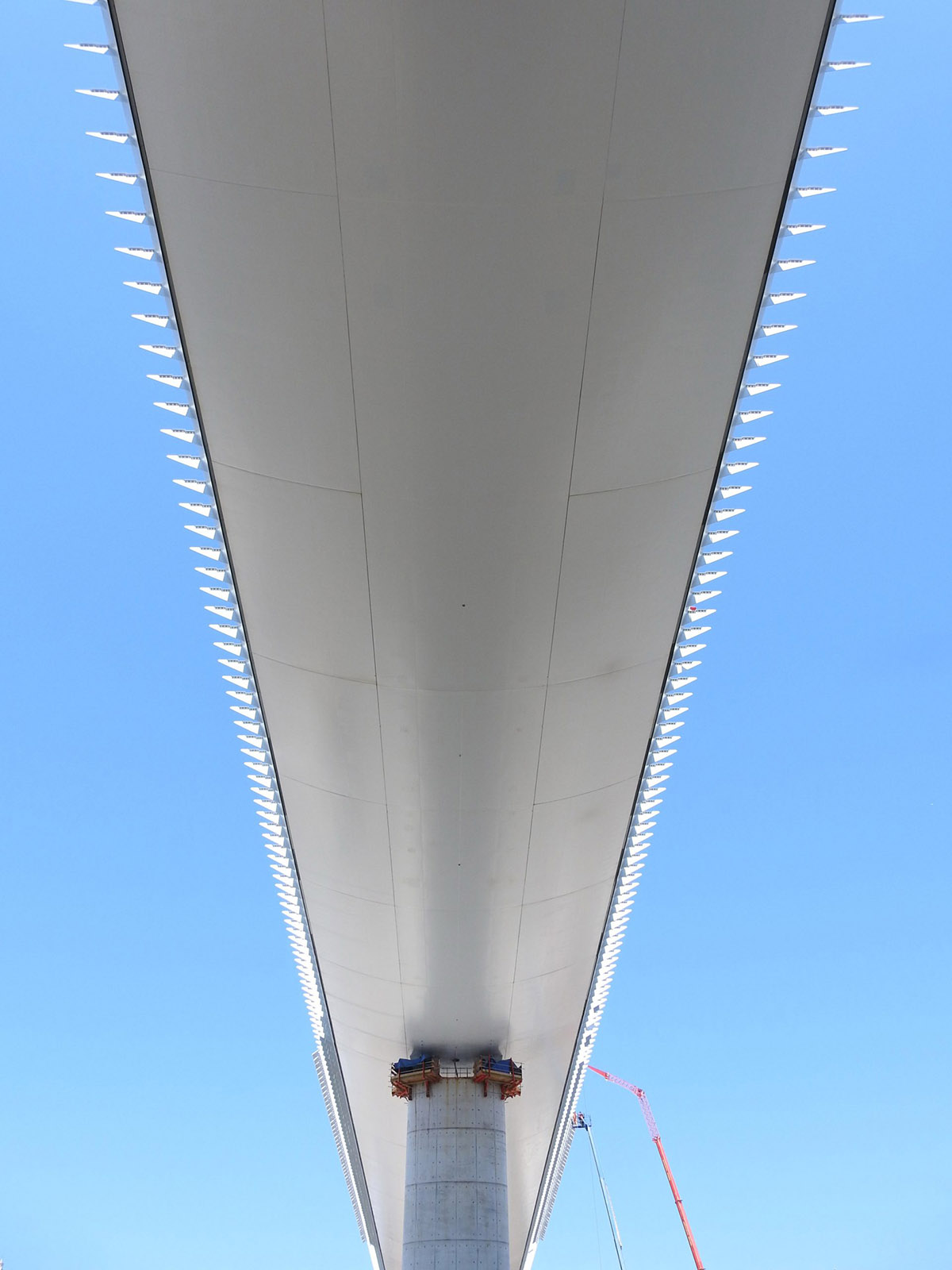 RPBW implemented emergency lane in the road section of the new bridge in both directions to guarantee road safety and the possibility of carrying out maintenance work along the bridge without having to resort to the closure of the ordinary traffic lanes.

"As a consequence of the great tragedy that was the partial collapse of the Morandi Bridge, the desire to rebuild and restart immediately set itself a wider objective, that of building a new bridge capable of representing the real driving force behind the transformation of the entire area of Val Polcevera," added the office.

"Therefore, the construction of the bridge will be accompanied by calls for tenders for public competitions with the aim of implementing works of urban, social and environmental regeneration."

"In particular, a new public park will be created that will, by way of a memorial, commemorate the victims of the collapse and restore the fragile natural ecosystem of Val Polcevera." 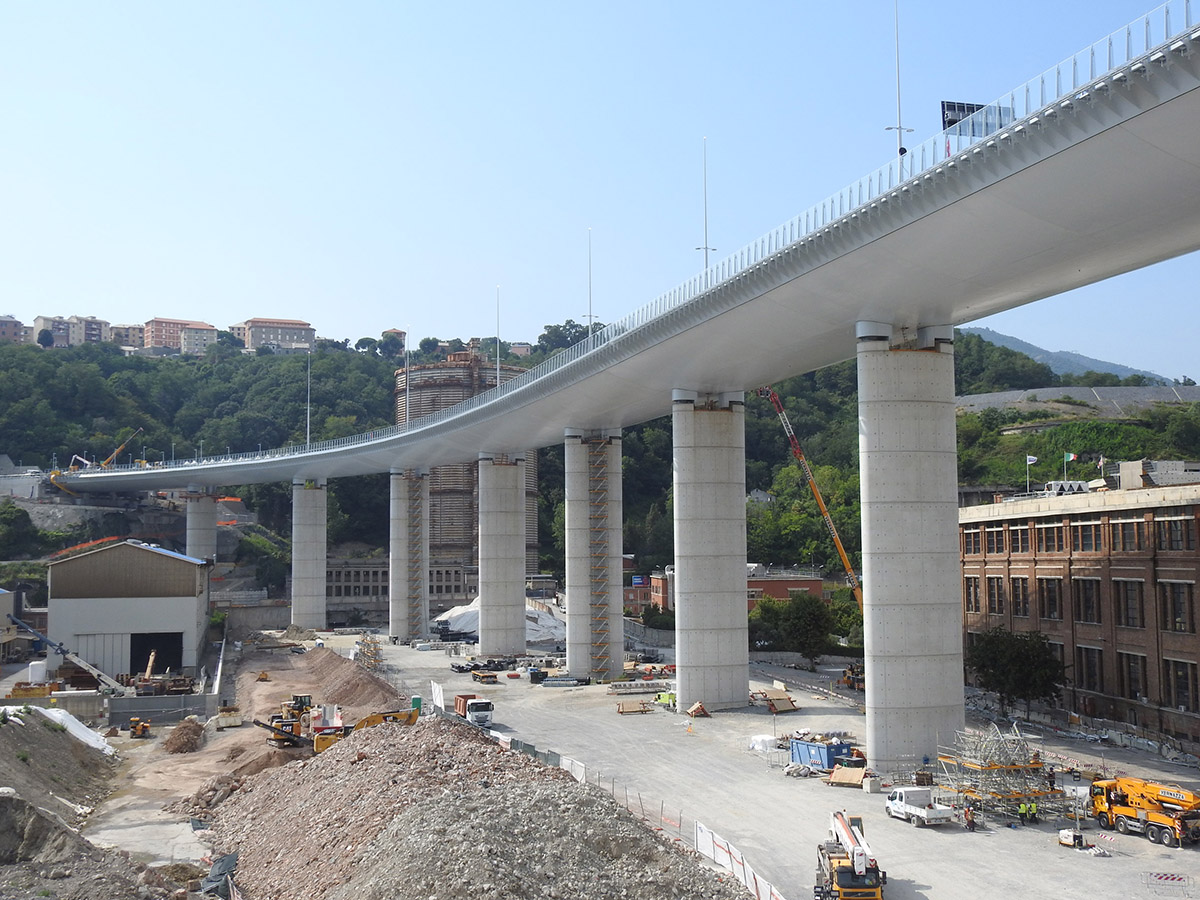 The concrete Morandi Bridge, built in the 1960s, collapsed on Tuesday, 14th August during heavy rainfall and the middle part of the bridge's structural component, made up of pre-stressed concrete stays and trestles, fell down onto a railway line and a warehouse 45 meters below.

The Ponte Morandi Bridge was originally designed by Italian engineer Riccardo Morandi in 1967, and spanning 1,102 metres and supported by three reinforced concrete piers. 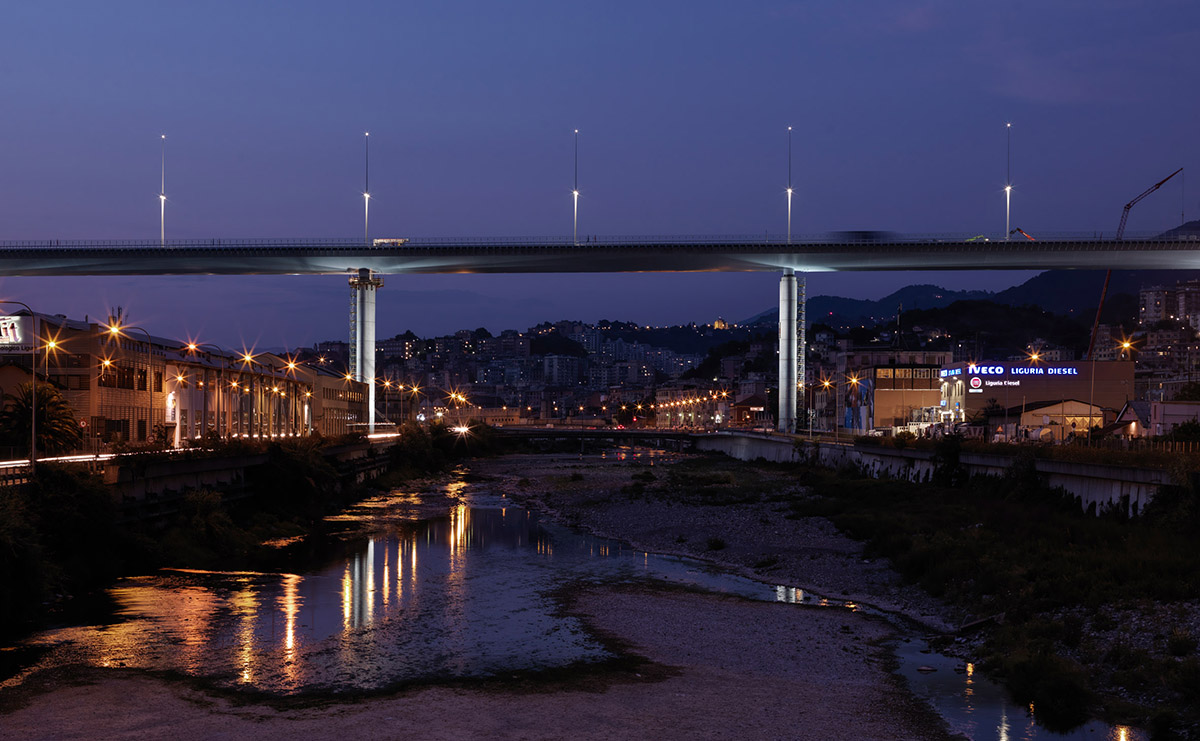 Renzo Piano founded Renzo Piano Building Workshop (RPBW) in 1981, the firm has offices in Genoa, Italy and Paris, France. The practice has since expanded and now also operates from New York.

RPBW currently completed Eighty Seven Park residential building on Miami's beachfront in Florida. The firm is working on a new moviemaking centre of the Academy Museum in Los Angeles.