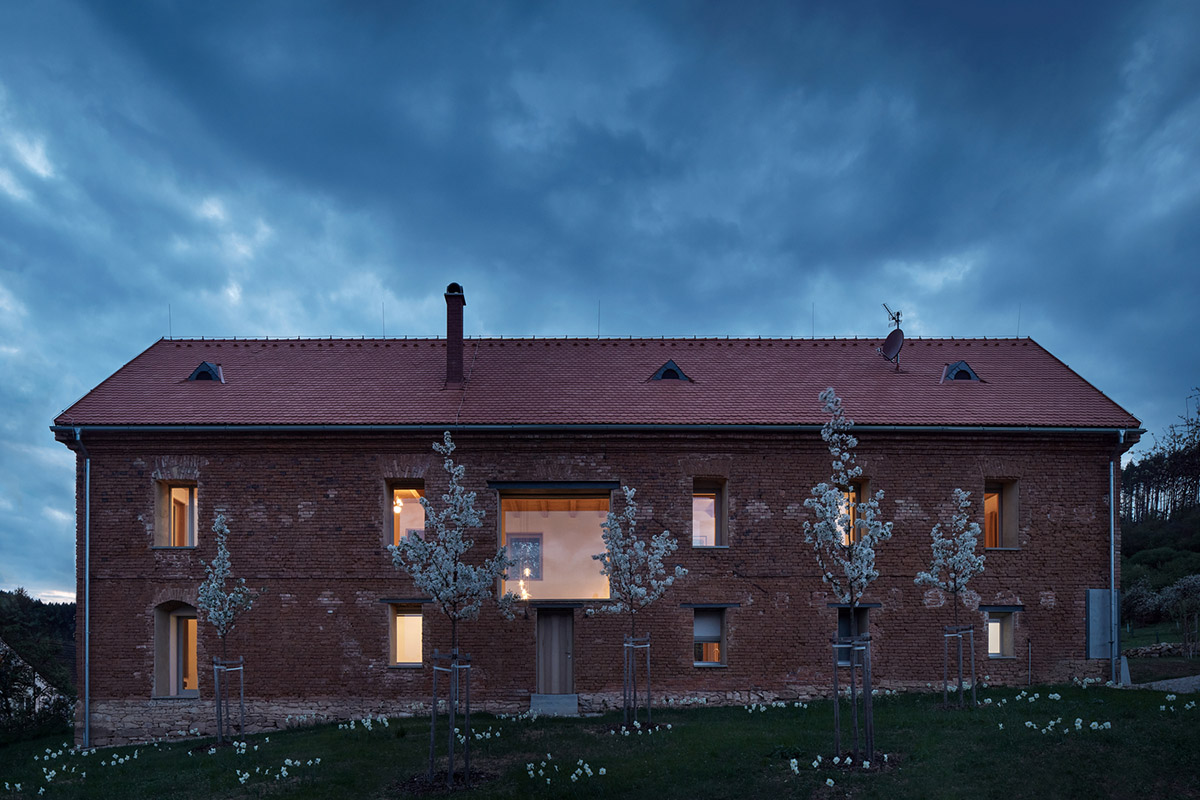 Czech architecture practice ORA has converted a former granary into a private residence by maintaining its original brick skin in Jevíčko in Czech Republic.

Named House Inside a Ruin, the 250-square-metre house was refurbished and reorganized in the interior by trying to keep its original state. 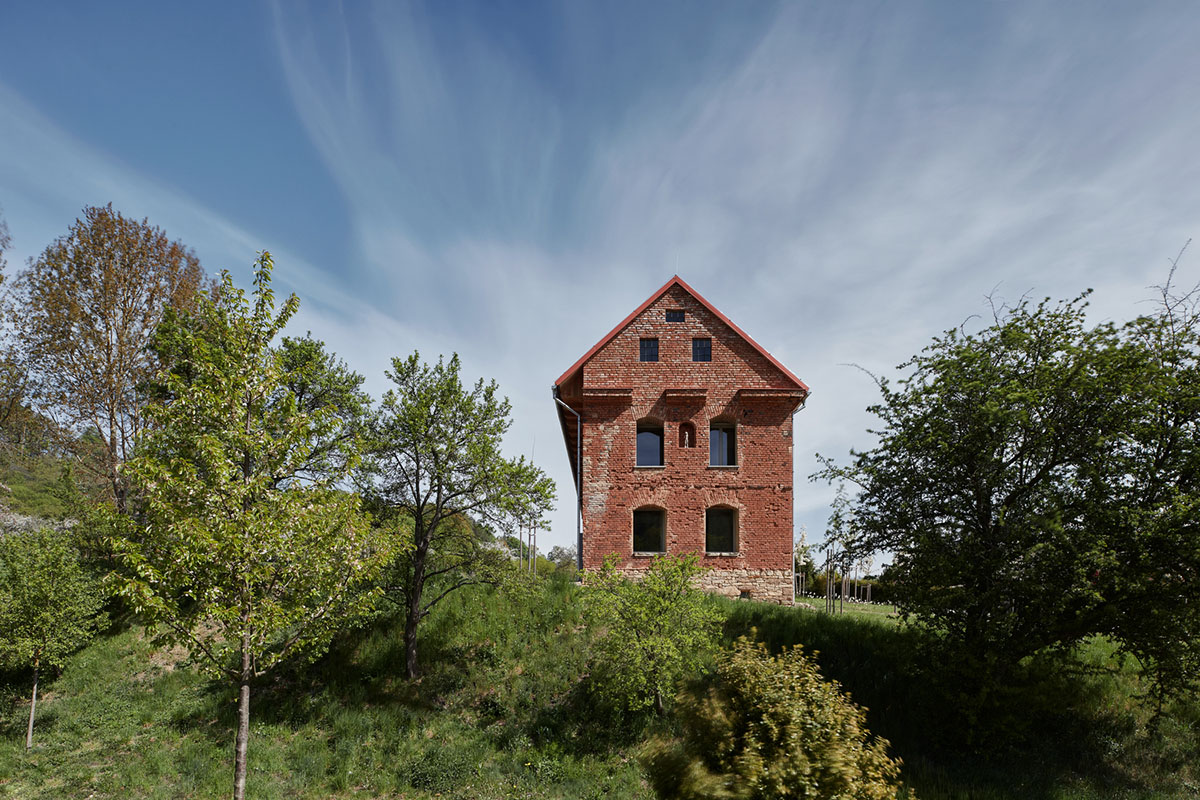 Originally built under the communist regime as a granary, the house was kept as a ruin and ORA was commissioned to transform the building into a private residence.

"During the first site visit, we analysed its joints, niches, and protrusions, discovering the original forms," said ORA.

"Despite its previous inconsiderate rebuilding, the house has not lost any of its grandeur."

"On the contrary, the way it is situated, the way it rises to the sky, and the way its raw matter resists time, have proven to be of the highest quality." 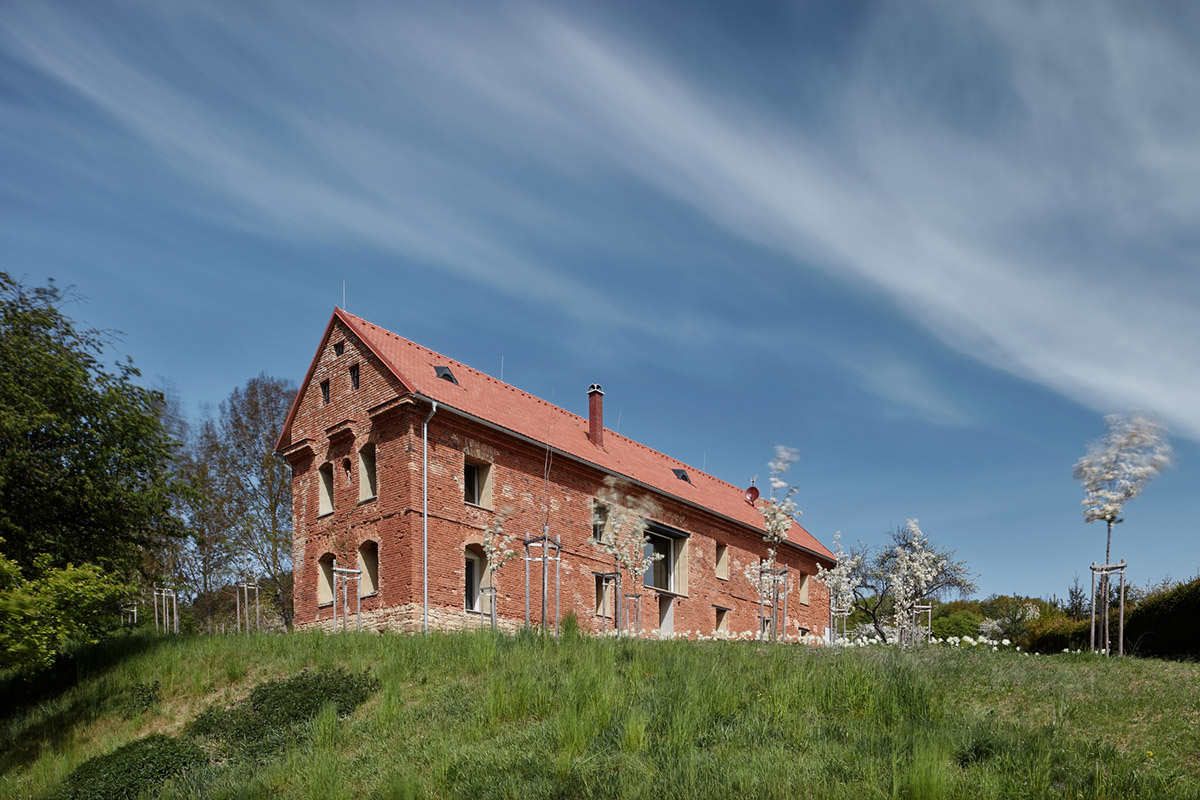 As the architects emphasized, the structure was ruin to the bone. ORA's aim was to keep the original house with its brick envelope and roof. "Together with the building owners, we asked ourselves whether the house had a place to return to," they added.

"Any attempt at a traditional repair would mean losing the original character of the ruin." 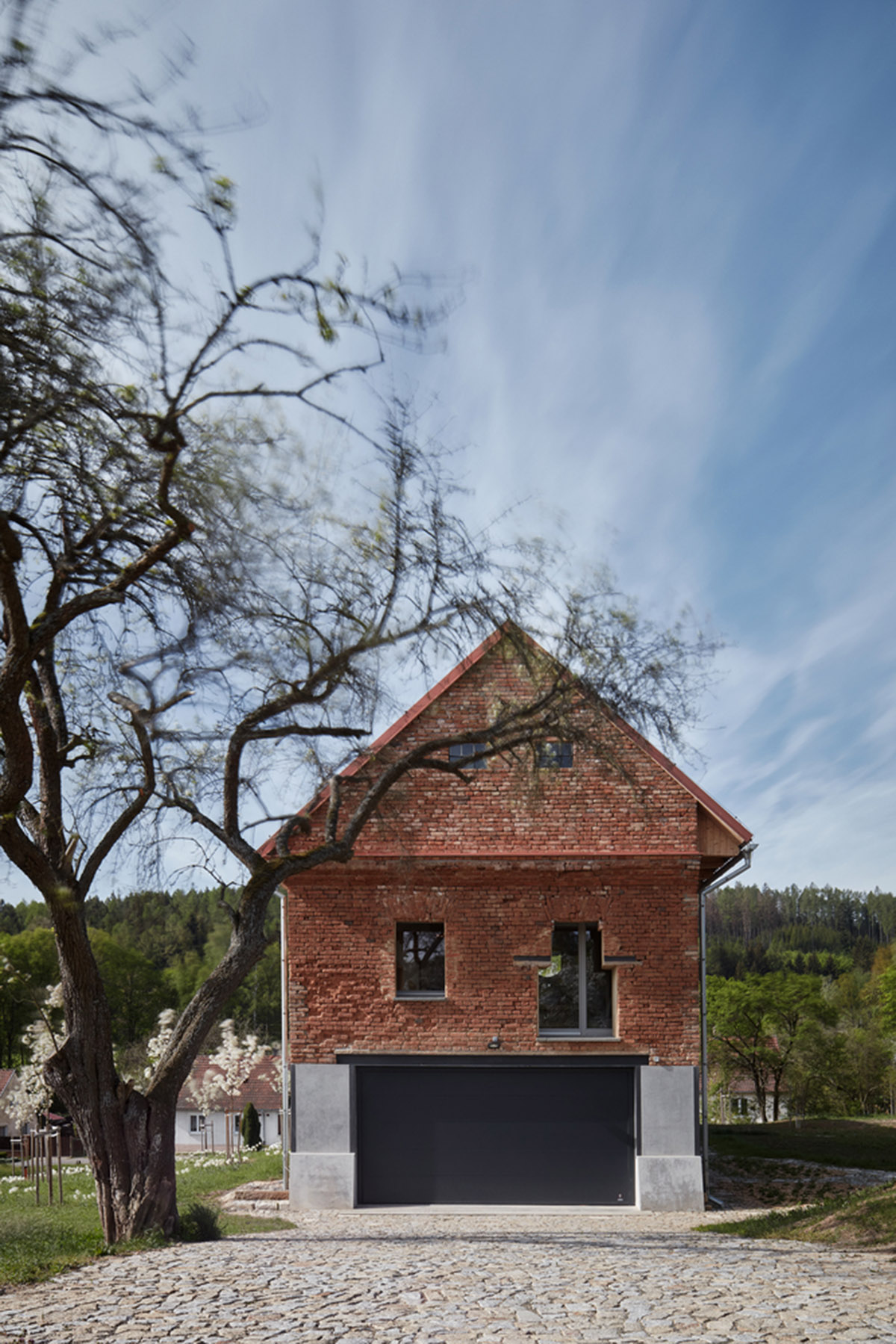 In project brief, the studio rejected a speculative reconstruction of the original state, as well as any other imitations. The architects proposed to fix the current state of the romantic ruins and enter the house anew. House to house, house inside a ruin.

ORA proposed to tear down the inner parts of the building and return its original layout with two floors instead of three, as well as the original scale. 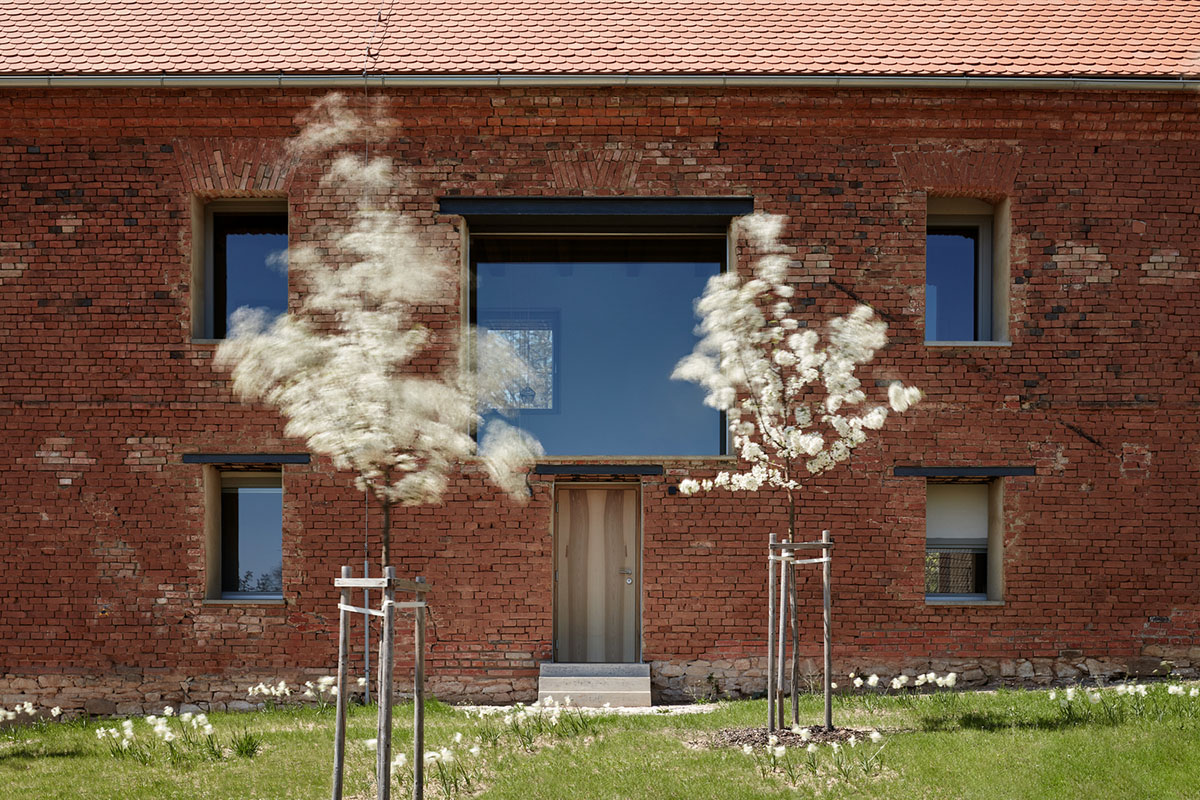 Related to this is a return to the original division of the facade. Without sentiment and depending on the needs of the layout, the team opened other large openings where needed. 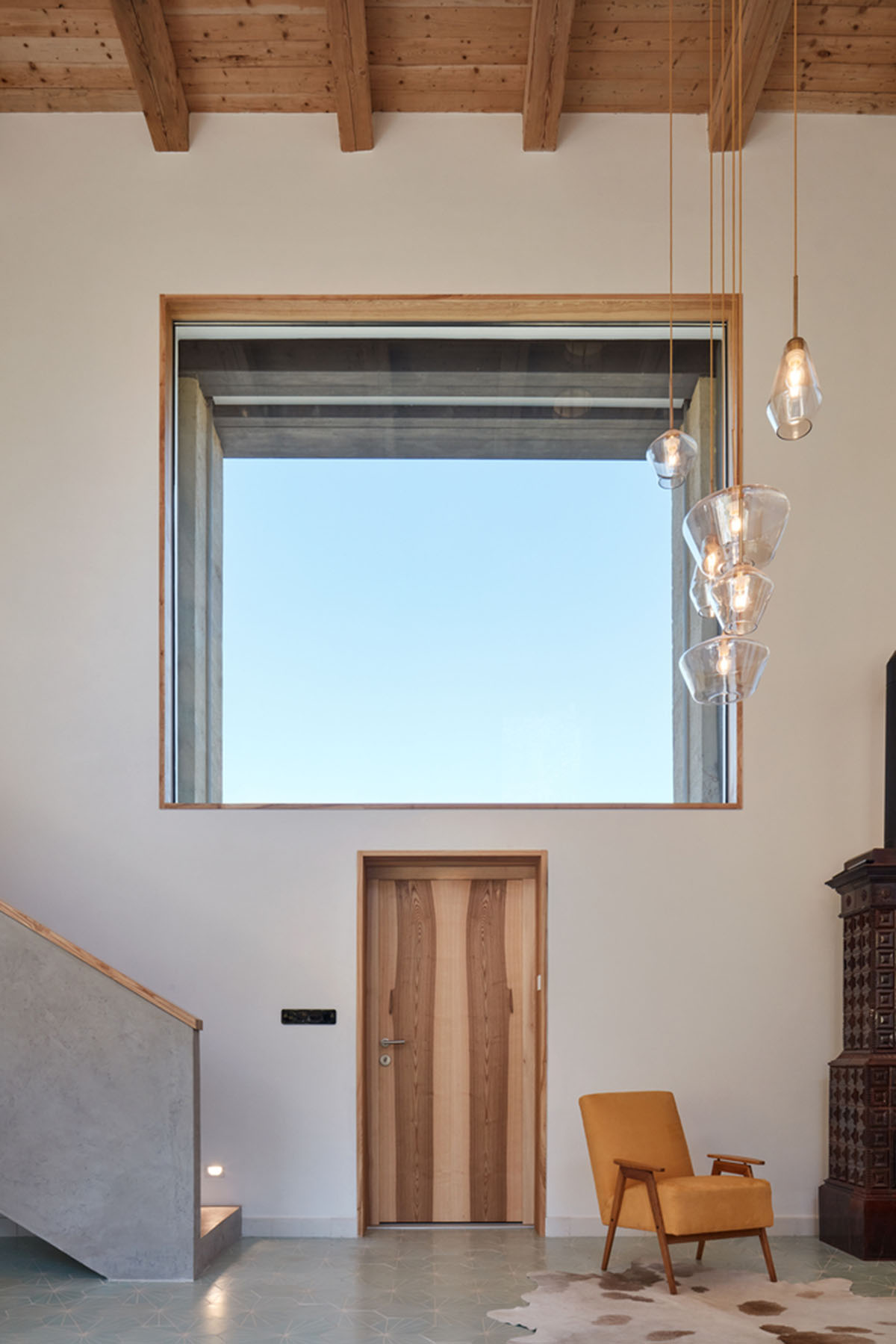 "We have built a new, insulated house into the existing staged ruin, a one that can meet all current energy standards," the architects continued.

"We reused the structurally sound wooden beams as elements of ceilings and truss replacements. Most of the material remained in place, just rearranged." The house combines low and high. The studio has inserted a new current layer, differing in its purpose from all the previous ones.

A ventilated gap is maintained between the new and the original structure, and the structures do not touch. The new structure is sometimes slightly shifted from the old one. 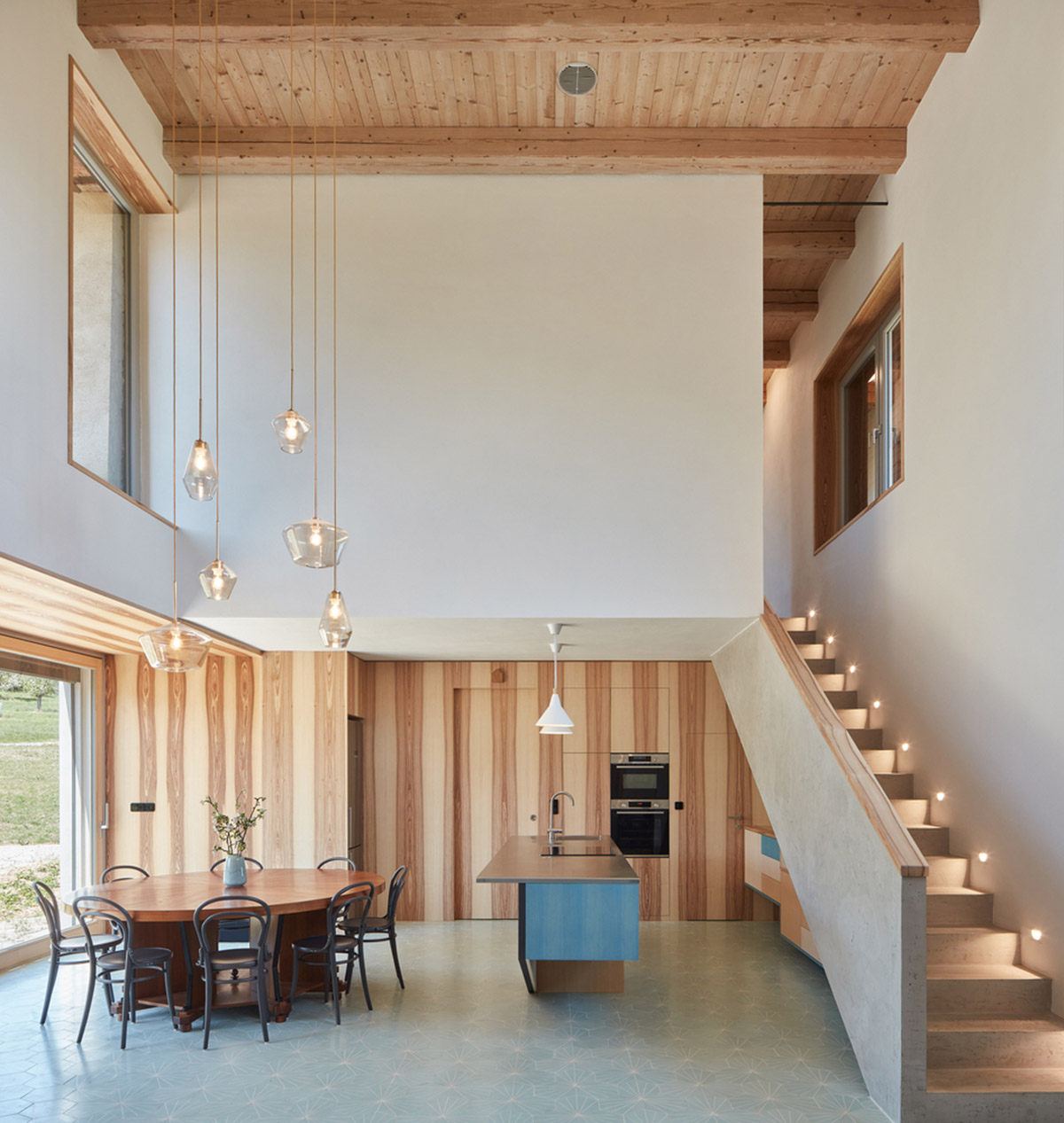 The windows do not fit precisely the openings in the old wall, and it some places, the old wall is also present in the interior. There is a visual intertwining of the two worlds.

The new building penetrates through openings in the old wall, and on the contrary, the old wall enters through new windows. "At the same time, even in such a case, it is possible to build economically using modern materials and achieve the required parameters." 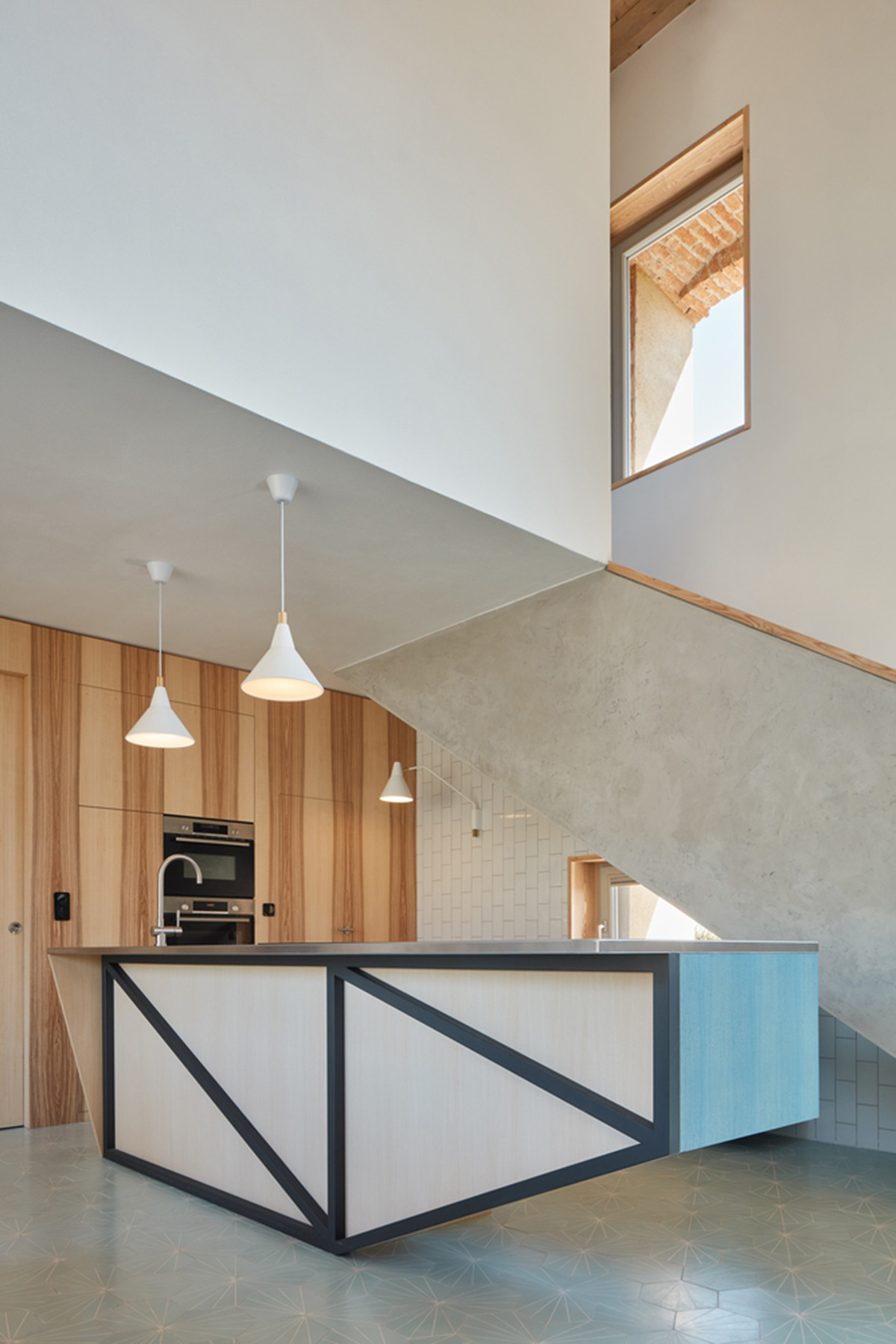 The architects aimed to create a house that respects its history since its inception, the garden has been designed to become a natural part of the landscape.

There are no physical boundaries. The boundary is indicated only by fragments of low walls and a corten gate, and the garden is connected to its surroundings. 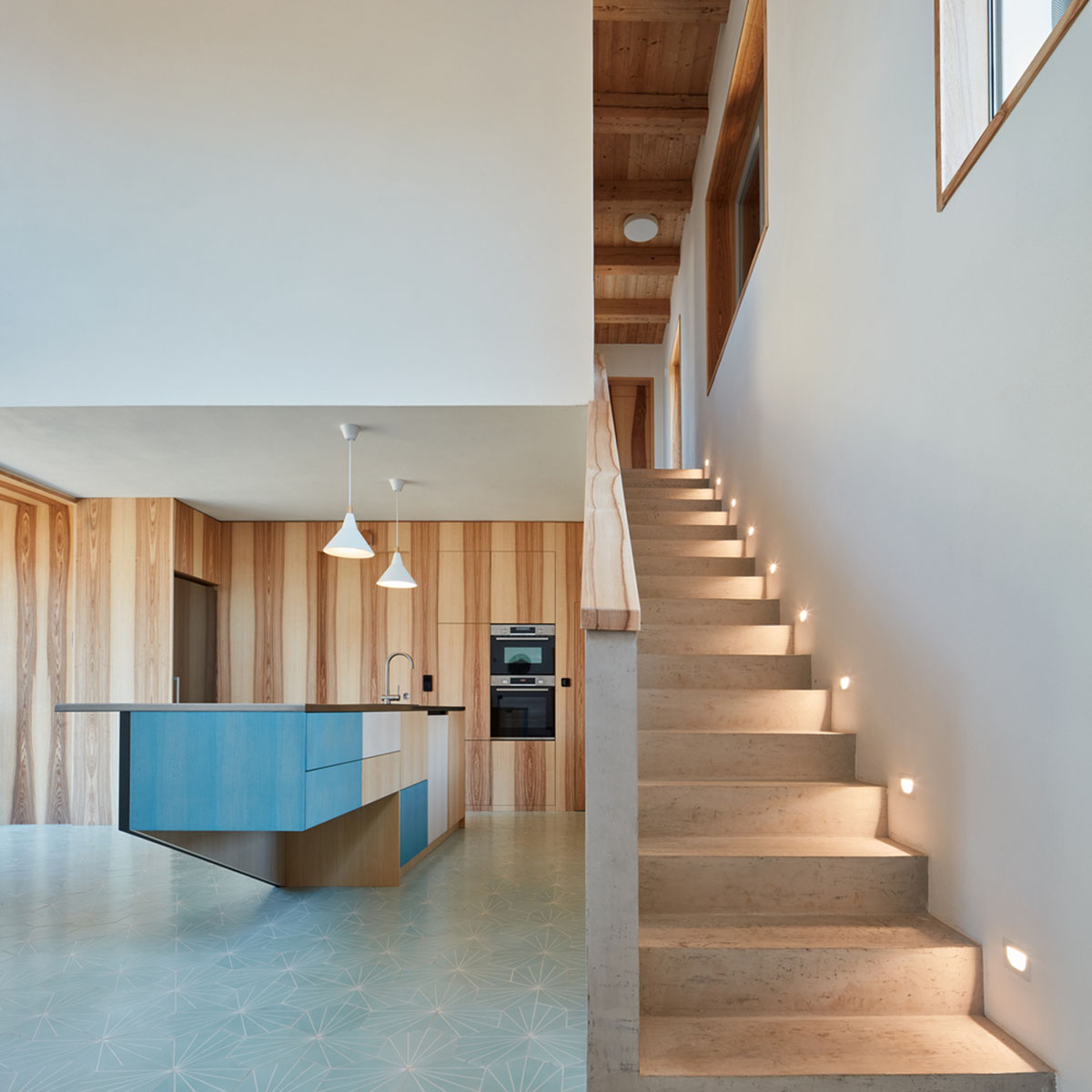 The orchards, meadow lawns, and hawthorns are only "borrowed" from the immediate vicinity. The garden becomes the binding element between the house, its views, and the surrounding landscape. 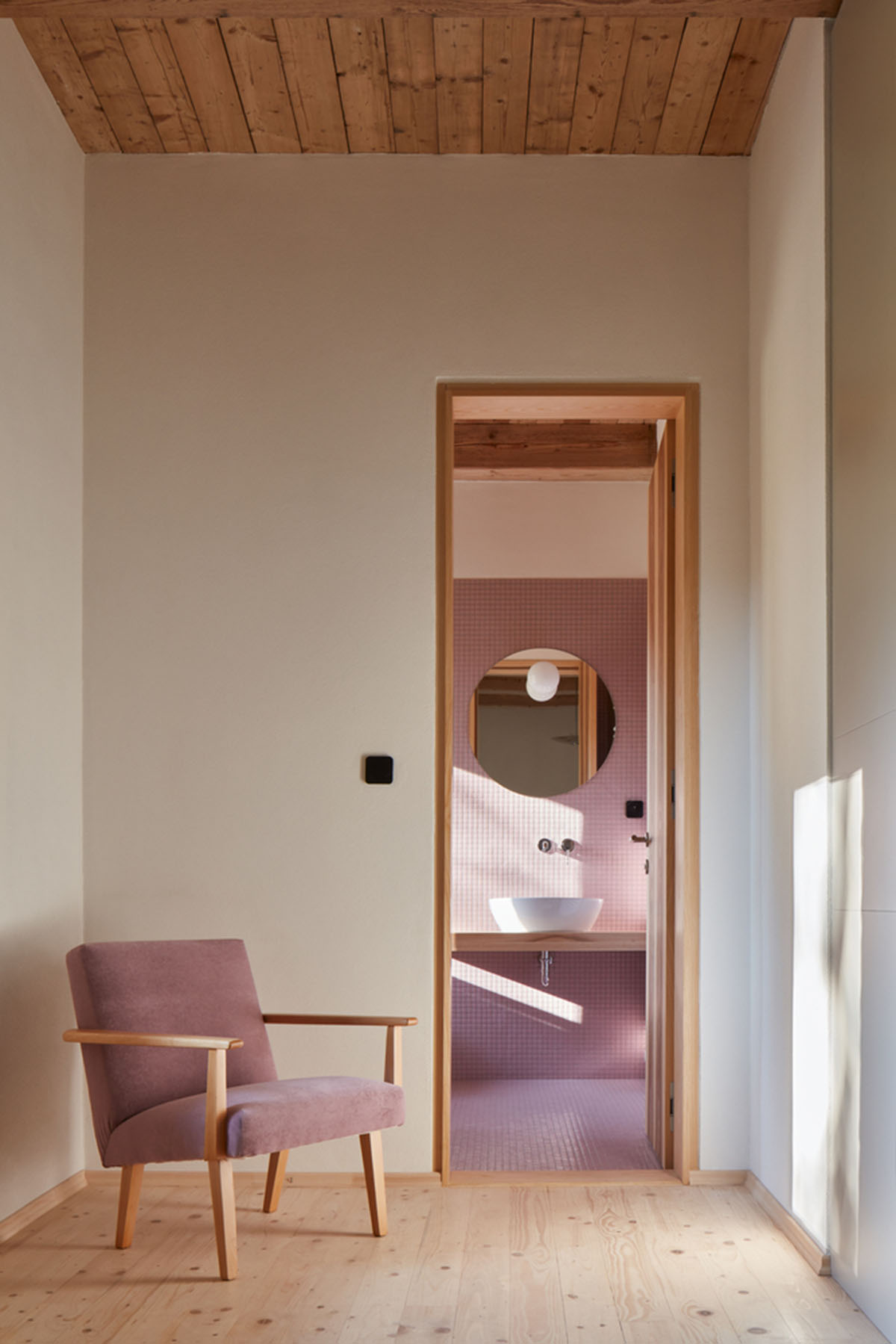 The interior of the house contains a generous double-height living space with a tiled stove and a kitchen. It also offers the conveniences of modern living. Stairs in a generous hall lead guests to individual rooms with bathrooms. There, users can enjoy the tranquillity of the space and look out into the open landscape through the massive old walls that frame the views; or surrender to the silence that reigns here.

The round table in the hall communicates with a massive oak table outside, where they can move when the weather allows and be even closer to the surrounding landscape. 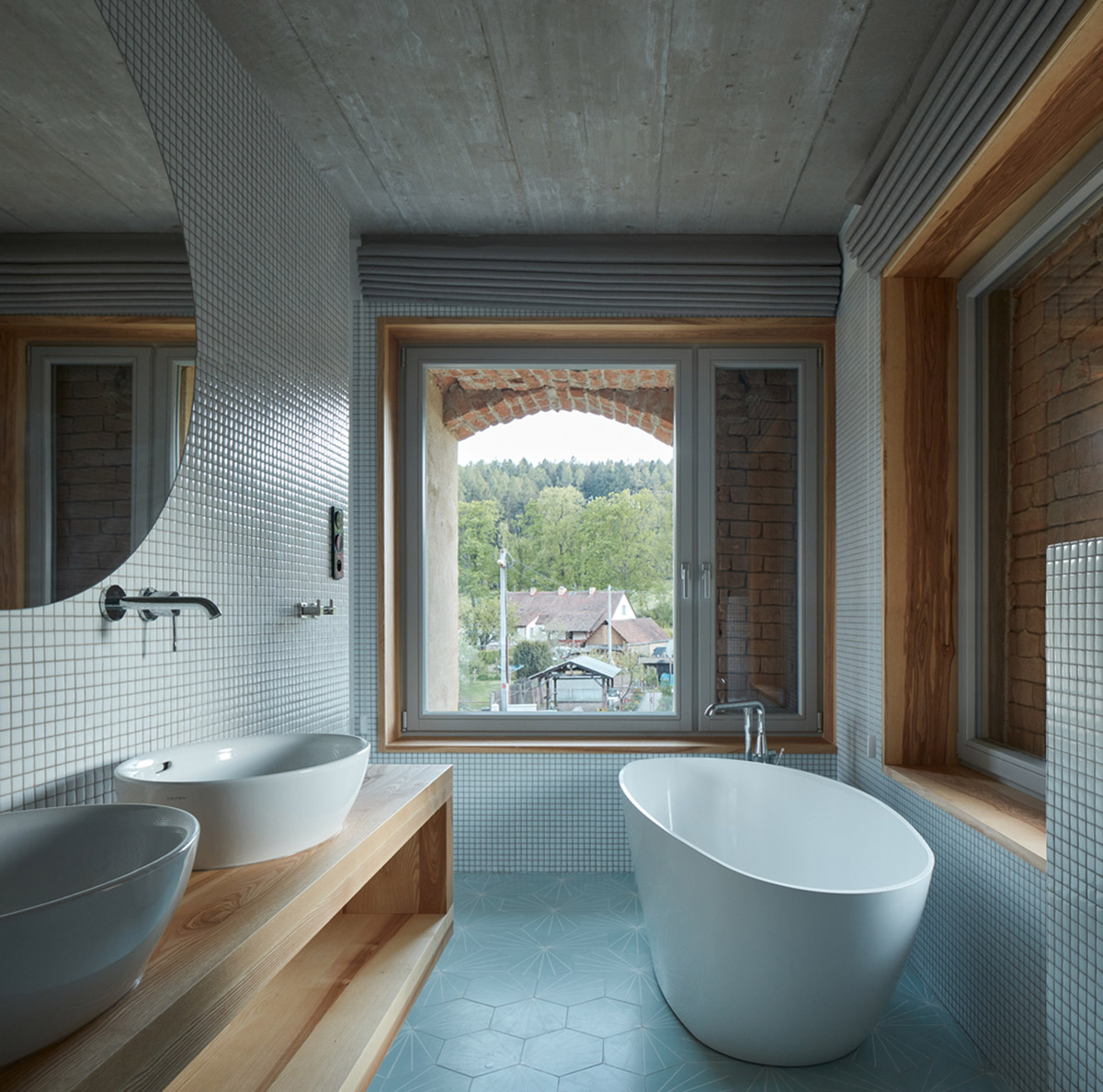 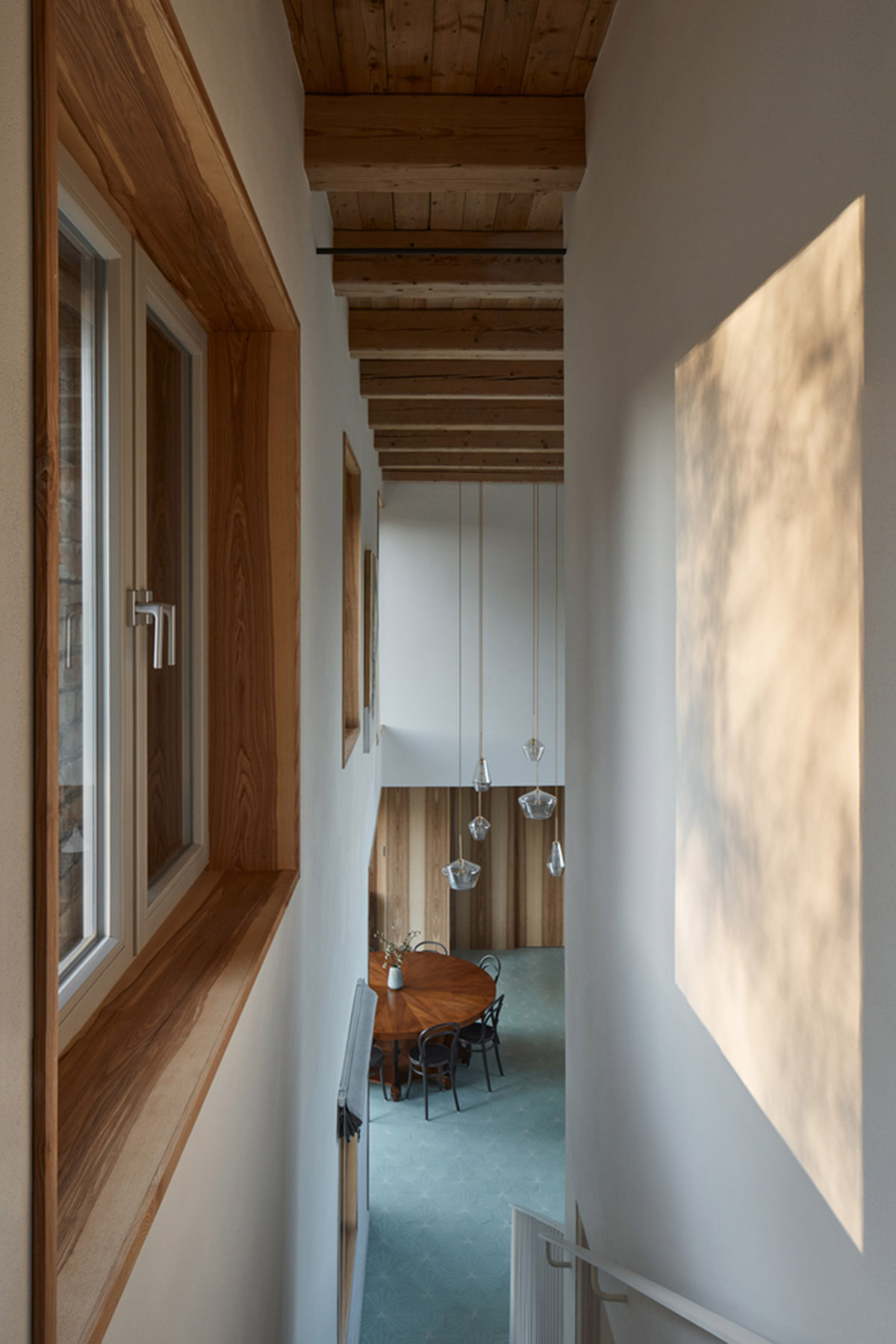 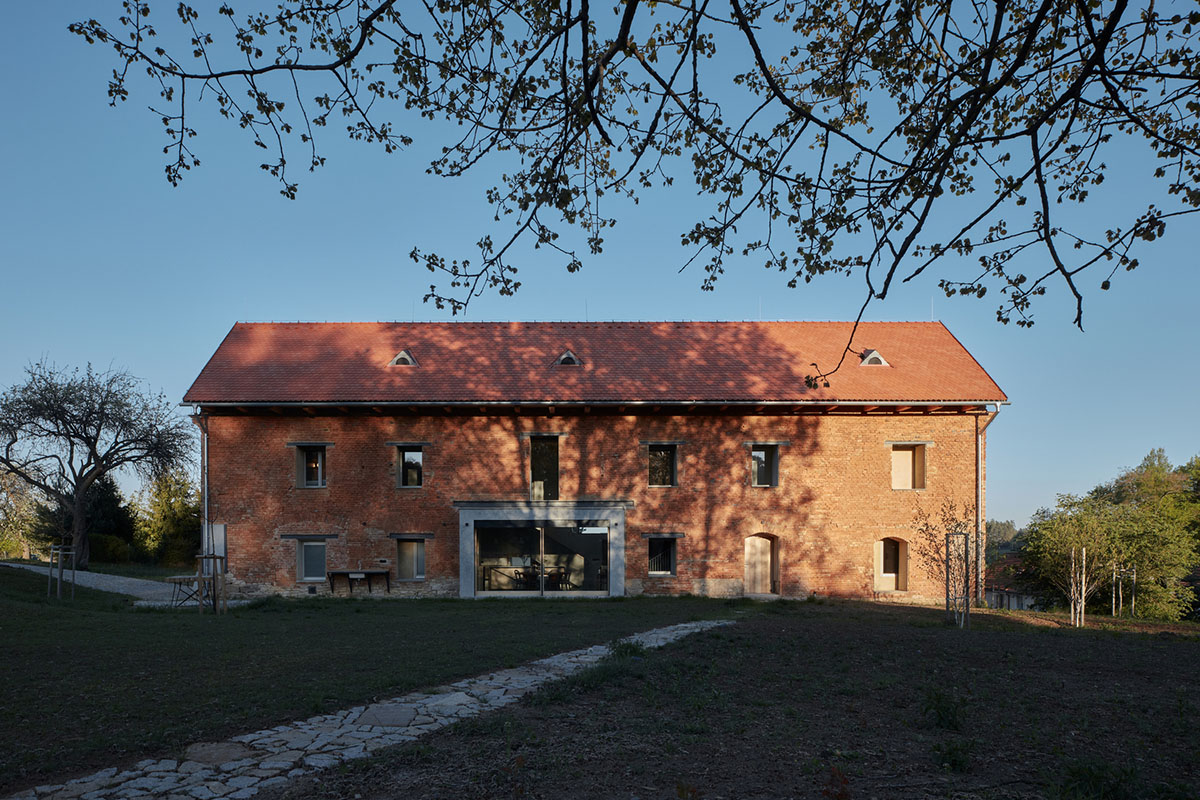 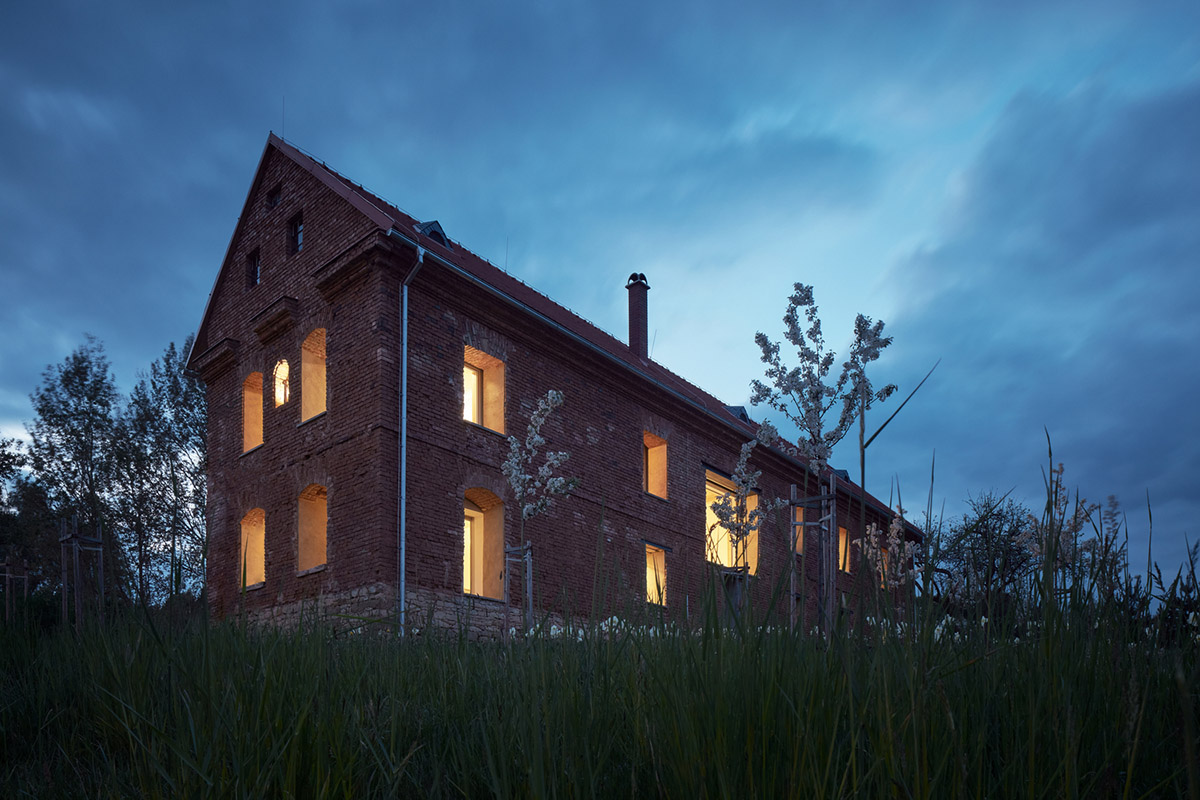 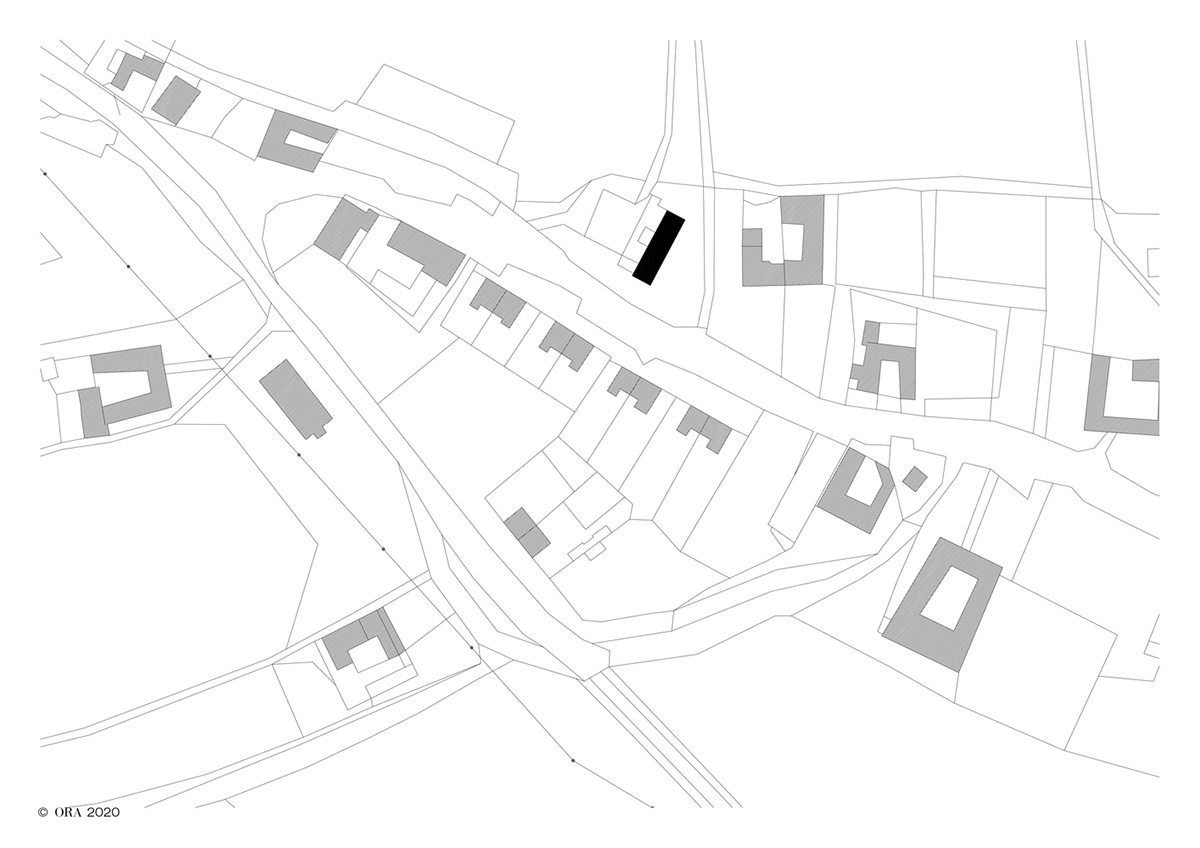 Project name: House Inside a Ruin