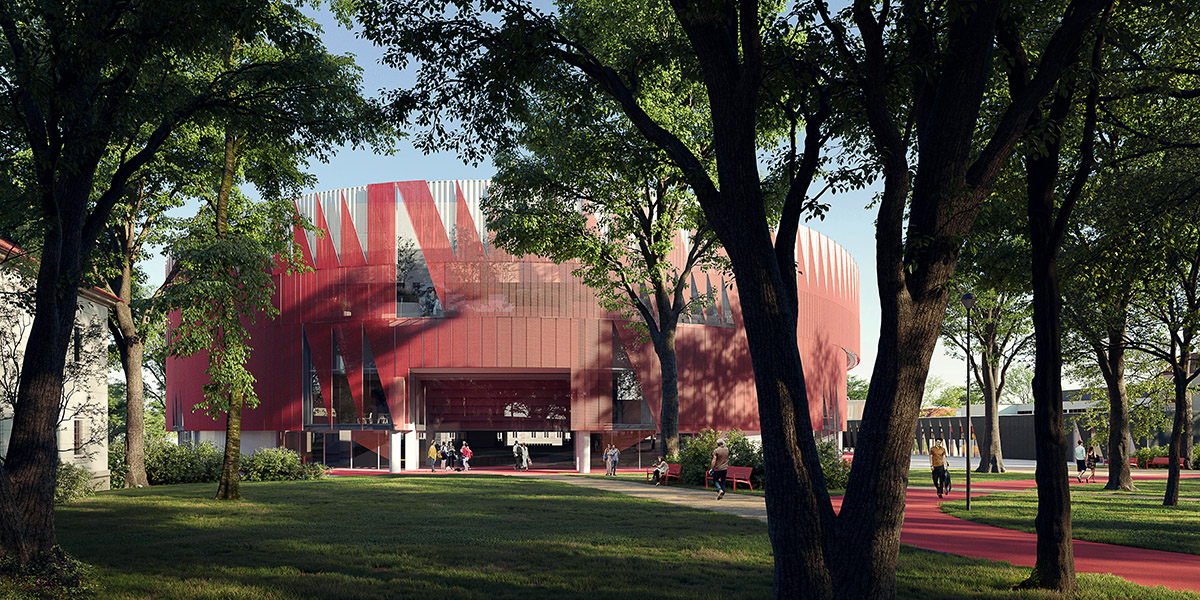 Chybik + Kristof Architects & Urban Designers has won a competition to transform an existing arena into a four-building multifunctional center in Czech Republic.

The studio has been selected to complete the construction of the Jihlava Multipurpose Arena, one of the largest sports and leisure complexes in the Czech Republic.

The construction is planned to begin in 2021 and expected to be completed in the end of 2023, which will build on the city’s existing hockey stadium, a deteriorating indoor sporting arena built in 1956.

With the reconstruction, the new building will be expanded into a four-building multifunctional center bringing together an adaptable ice rink, a rooftop running track and a gym as well as a sports academy, hospitality establishments and shops. Hosting both regional sporting and cultural events, the completed structure will act as a public platform open to a variety of audiences for a diverse range of activities, in an effort to revitalize this long-neglected area of the city.

Chybik + Kristof Architects' design for the new Jihlava Multipurpose Arena revisits the existing structure of the building, initially developed as the home stadium for the regional ice hockey club.

A multifunctional space with a capacity of 5,600 spectators, the project extends the stadium’s original purpose by creating a versatile space, adapted to both its primary sporting purposes within state-of-the-art facilities and a broad spectrum of activities – and their respective audiences.

Located on the border of Jihlava’s historical center, the arena – a structure usually confined to the periphery of cities – is adjacent to a park and university and places itself in the continuity of these two spaces. 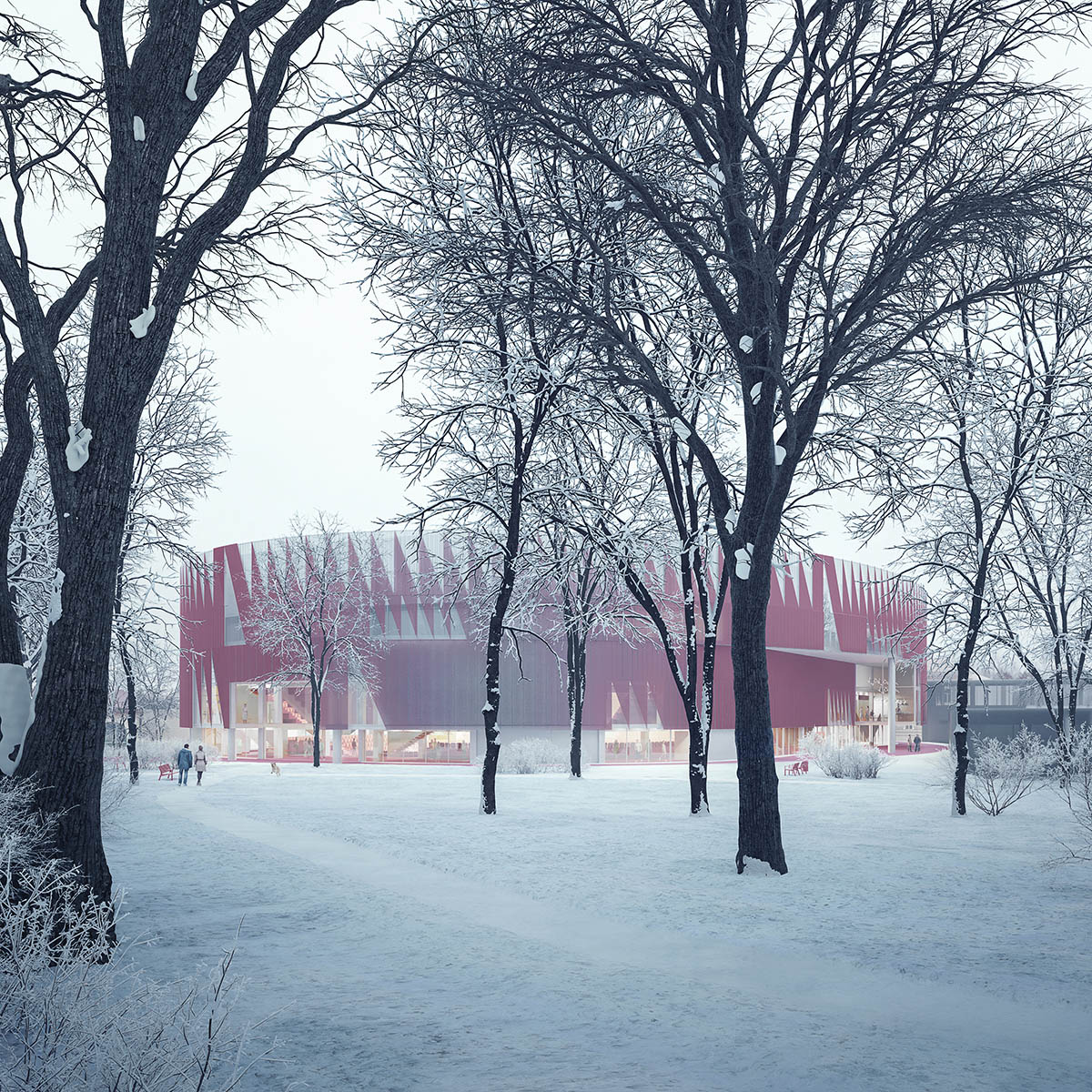 The several public spaces nested throughout the four- building “urban stadium” allow it to melt into the surrounding urban landscape. Rather than marking an interruption in the existing city structure, the arena serves as a transparent and fluid transition between seemingly distinct spaces, thereby reviving and opening up the area to new functions, and ultimately extending the city center beyond its strict historical bounds.

In this new permeable space, which the inhabitants are encouraged to invest in their daily lives, the architectural framework lays the foundations for the prominent notions of free movement and interaction.

"We envisioned the Jihlava Multipurpose Arena as a deeply versatile complex, whose various functions are reflected at once in the technical structure, the landscaping and the aesthetics of the buildings," said Ondřej Chybík and Michal Krištof.

"In integrating multiple purposes, we took significant consideration of their various audiences, thereby seeking to reflect the city’s diverse social and generational communities and to encourage their interactions. More than a center for sports and events, the arena is a social campus for the city – used by the people, thereby designed for the people."

The new structure unfolds into four distinct buildings, two of which already exist, connected through open-air walkways and green spaces. While the existing rectangular stadium undergoes full reconstruction and the sports academy is maintained as a key element of the site, they are both refurbished to host new functionalities and better blend within the overall environment and its signature aesthetic.

At the heart of the project, the architects erect a spacious new arena: a monumental structure, its materials and forms reflect the city’s Baltic origins – a reference likewise mirrored in the triangle-patterned façades of the various refurbished and new buildings in the complex. The oval arena is structurally conceived as a versatile space: the interior space, endowed with the complex technical equipment necessary, serves at once as a hockey rink, exhibitions and events hall, and concert venue, complemented by an indoor gym.

On its roof rests an outdoor track, further enriching the building’s sports functionality and inviting audiences to look upon the surrounding views of the city. Adjacent to it, the architects have placed a hospitality building. Placed at an intersection, its elevated pedestrian-friendly structure invites visitors into the complex by allowing them to view the full environment from the street and thereby easily orient themselves within it.

Combining a restaurant, hotel, gym and office spaces, it is exclusively dedicated to enriching visitors’ multifaceted experience of the complex and ensures the connection with the neighboring sports venue. 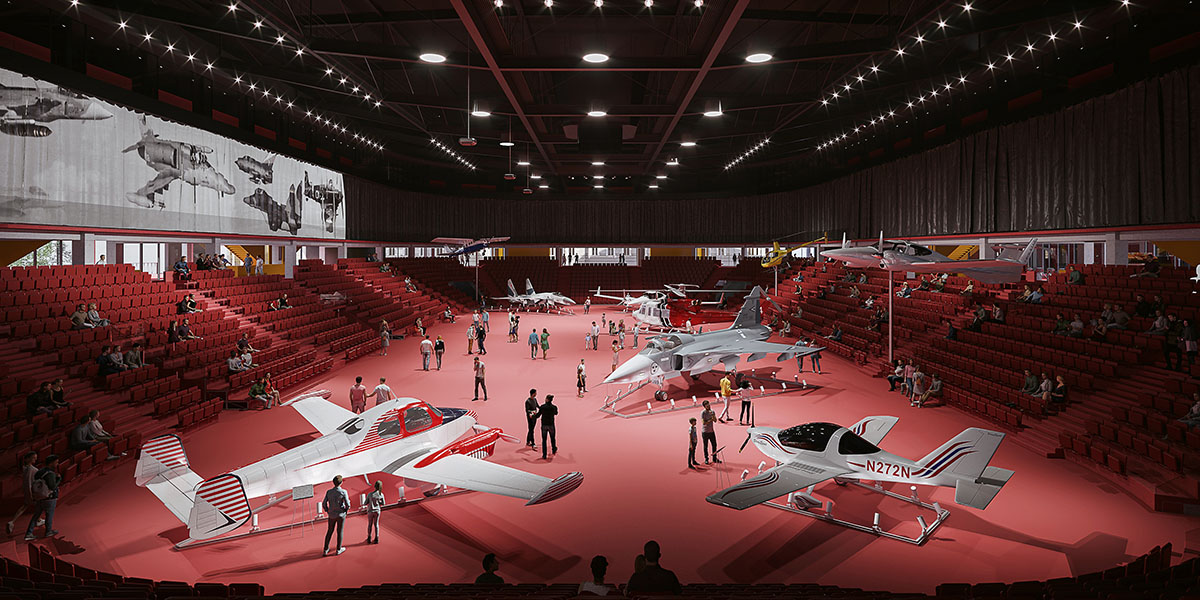 Beyond a circumstantial, events-based site, the Jihlava Multipurpose Arena is an everyday space, an urban sporting, cultural and social campus for visitors of the arena, athletes, students of the academy and university, and the general public to invest.

As the four buildings’ complementary and interconnected functions contribute to this, they share a distinct red metal grid façade, formed by apposed triangles. 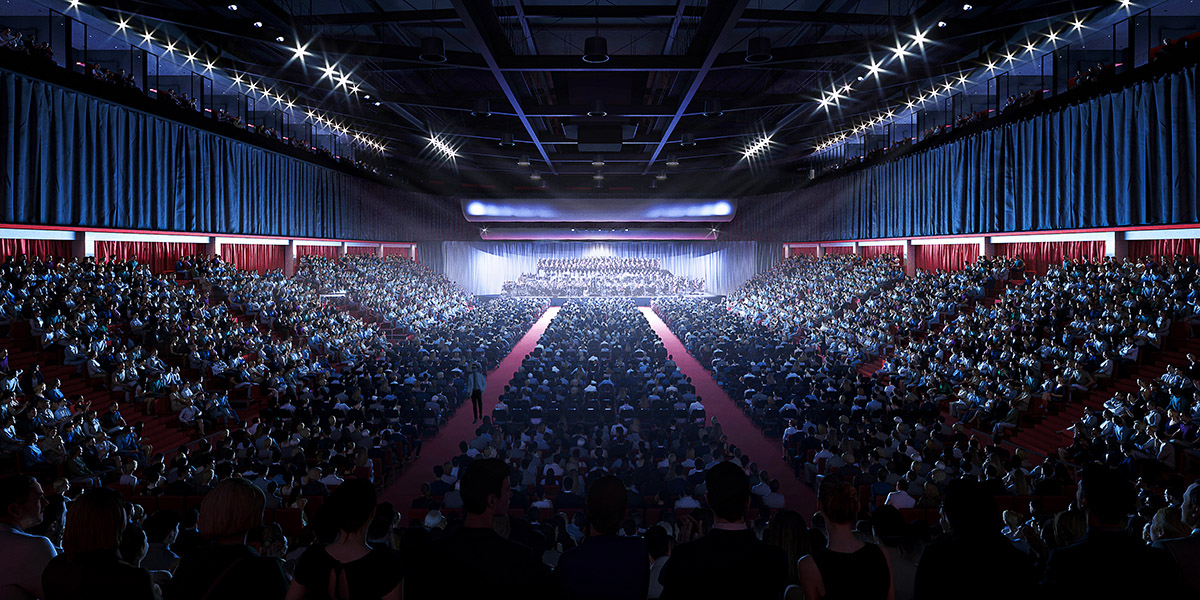 The expansive, highly visible and recognizable complex – both aesthetically and structurally – grows into an icon for the city, a definite, familiar, and understandable building for its inhabitants. 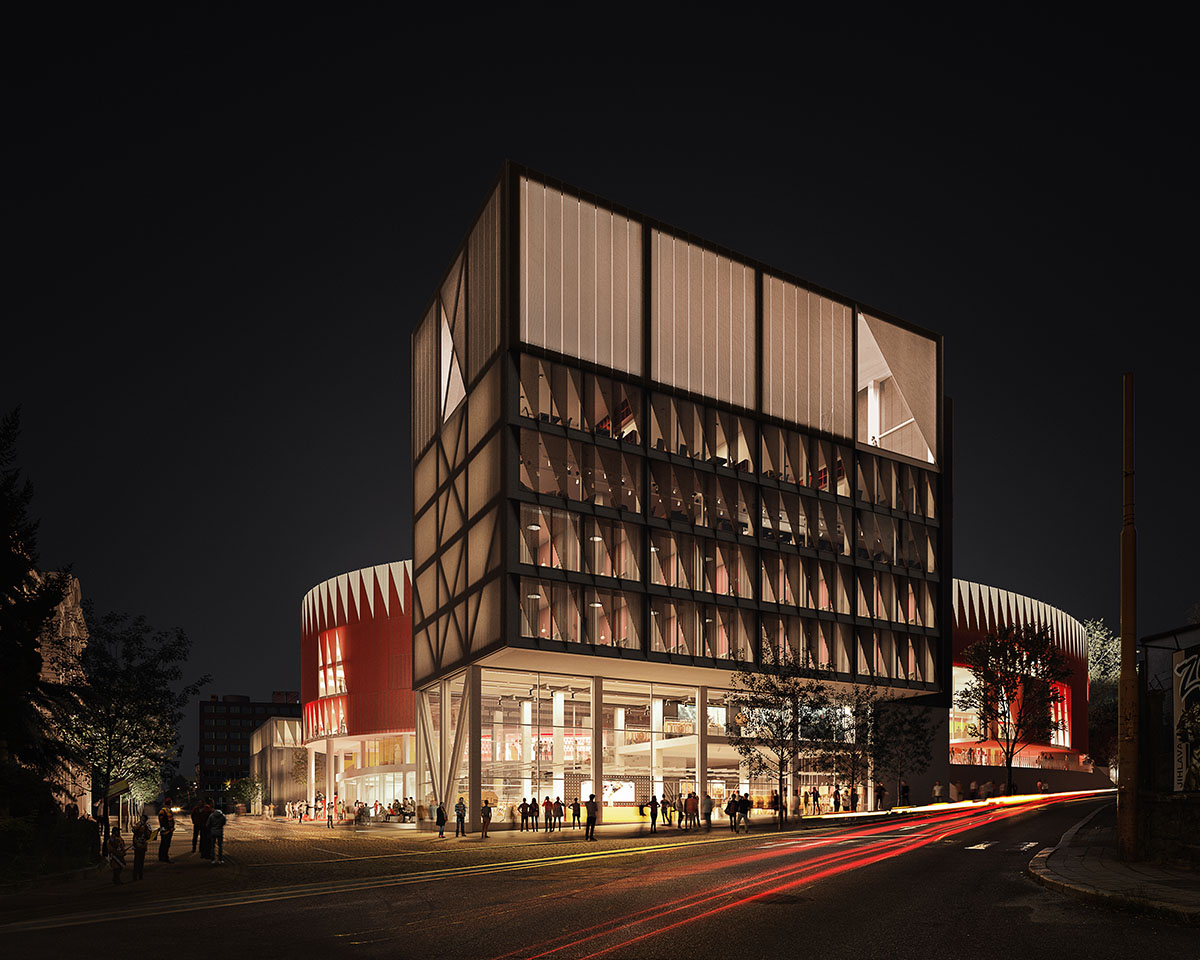 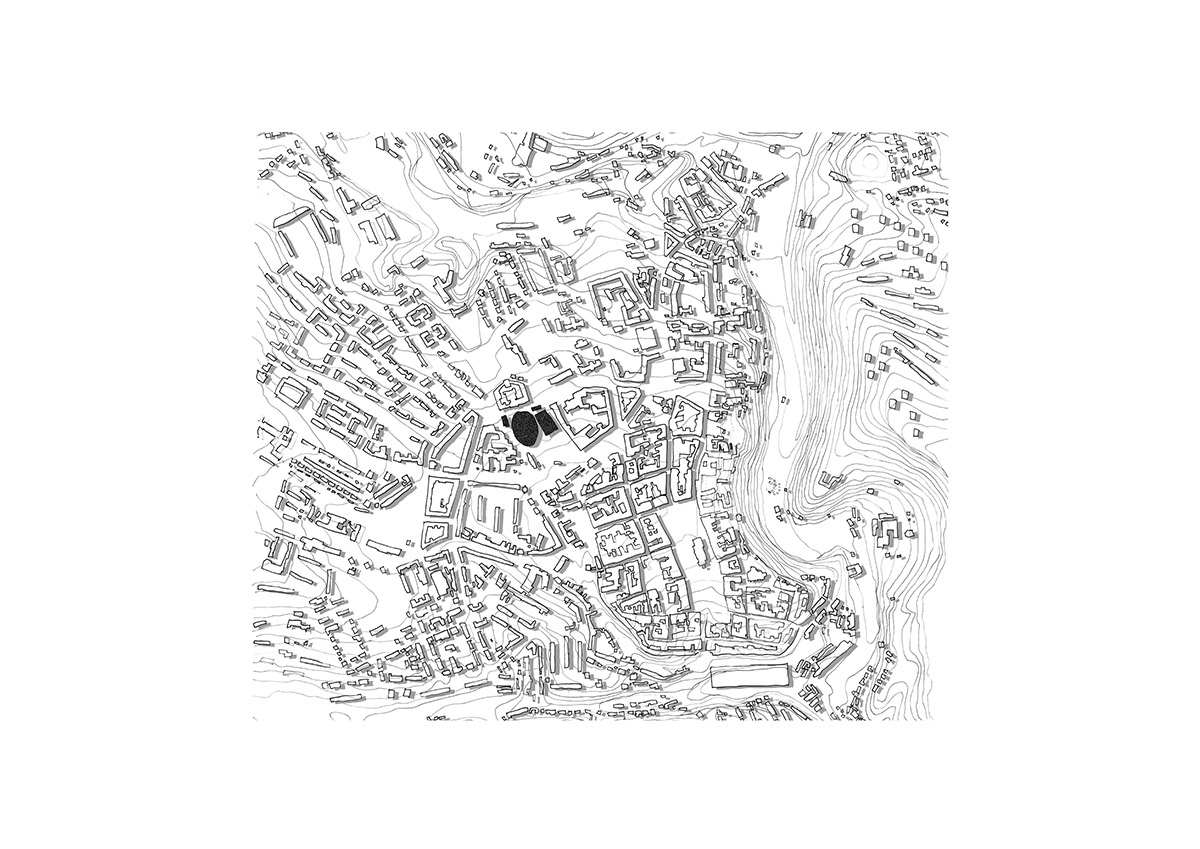 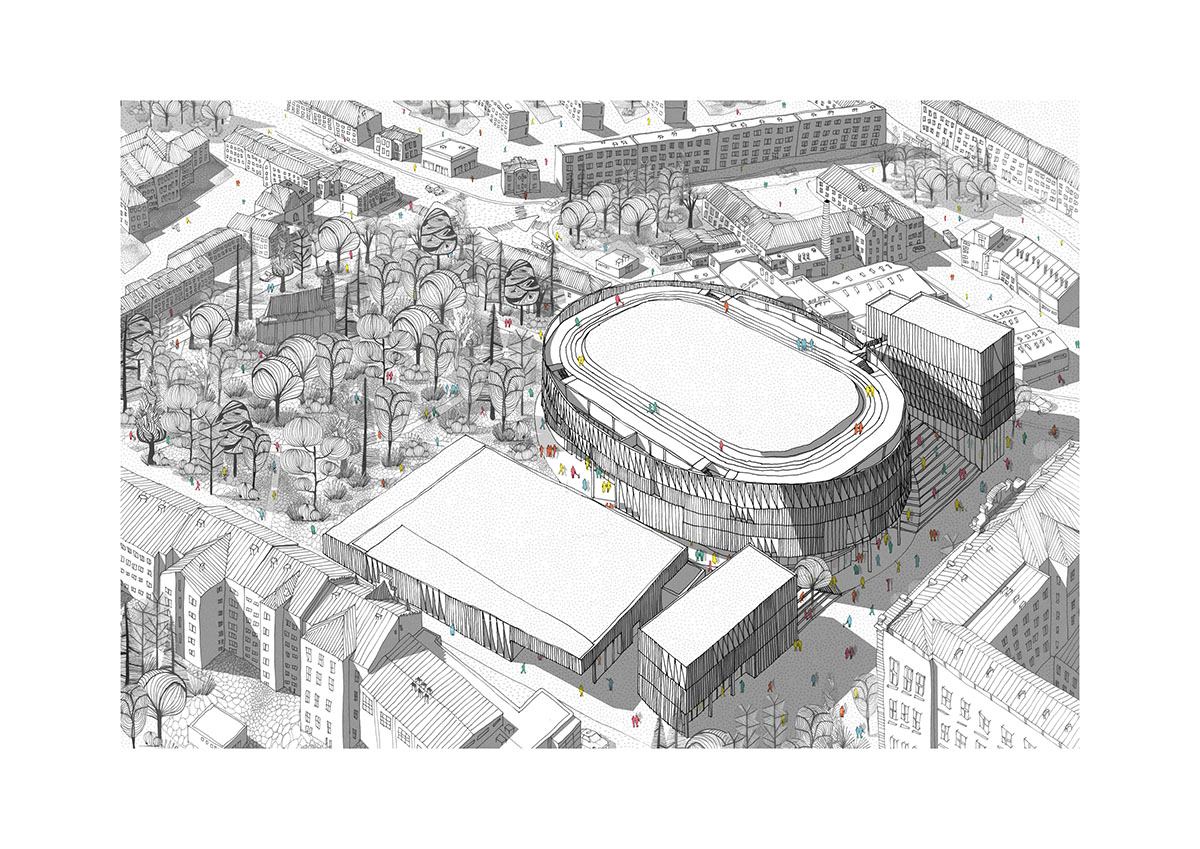 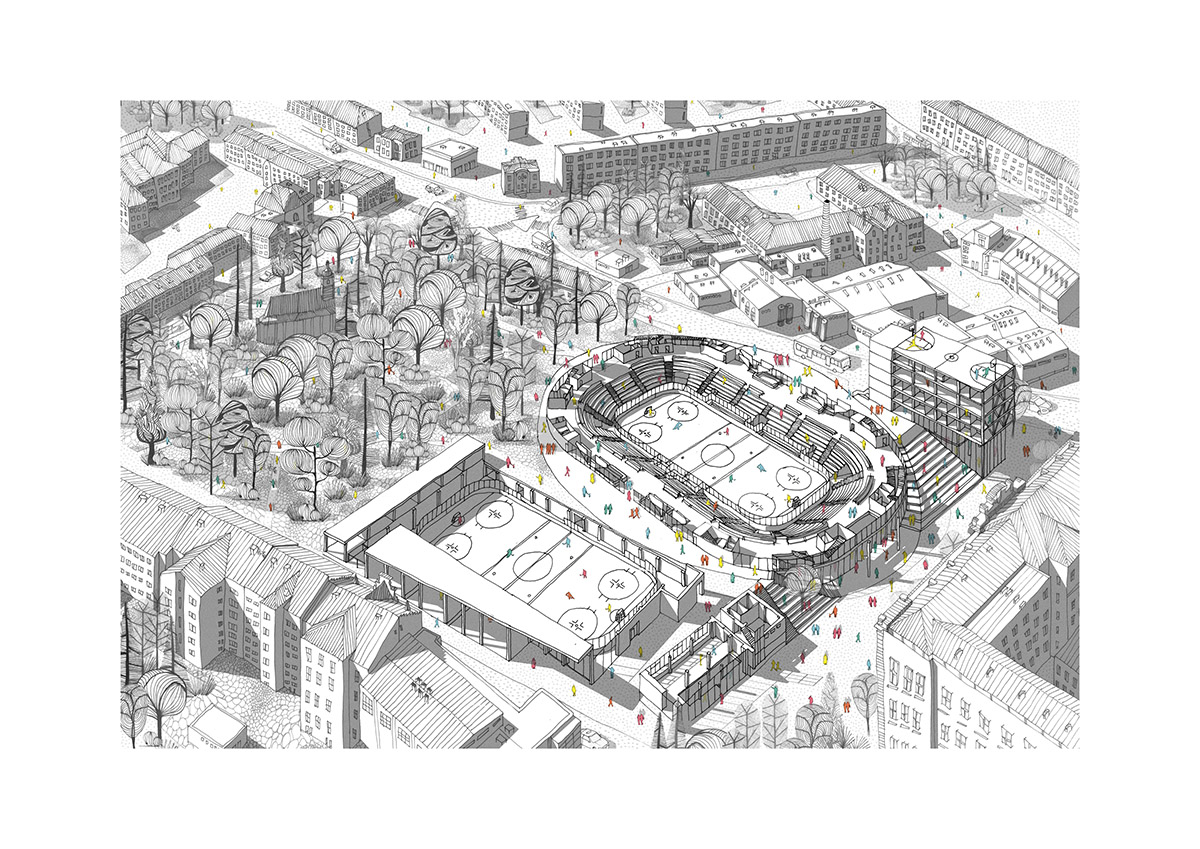 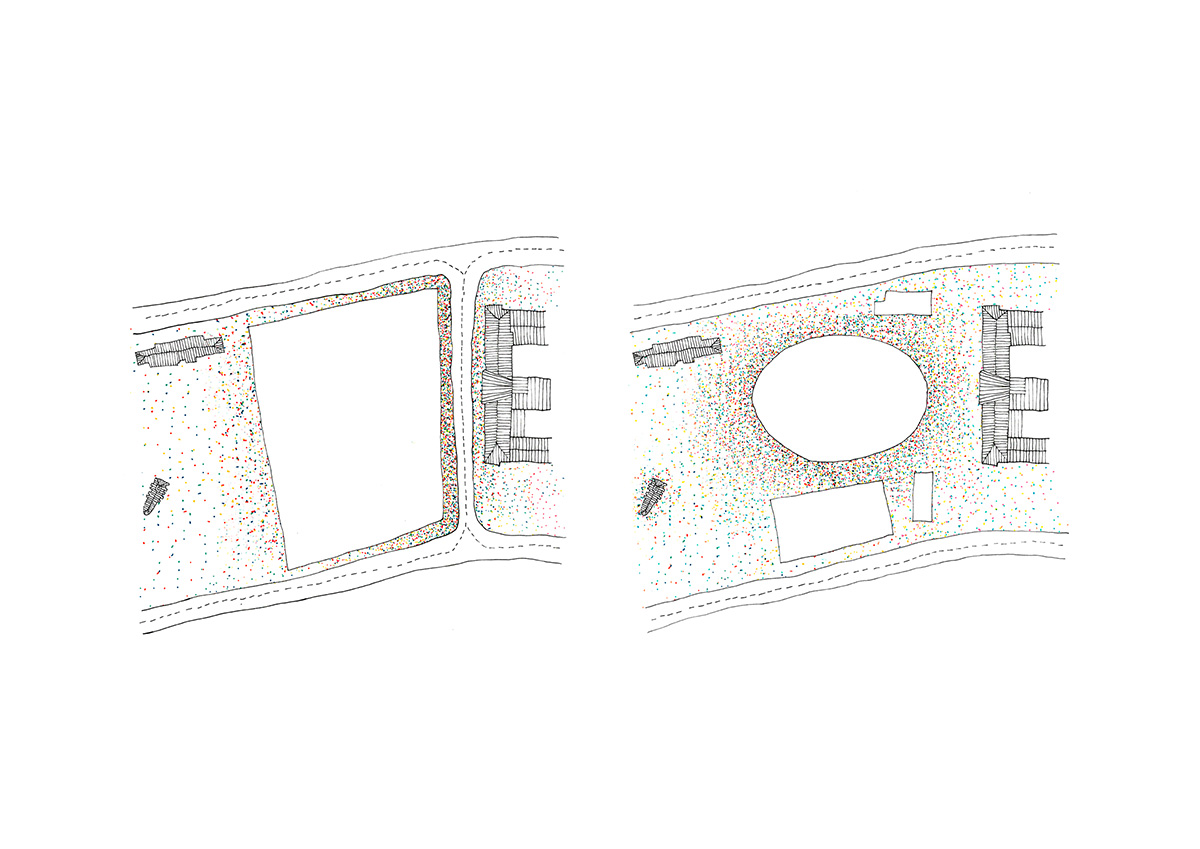 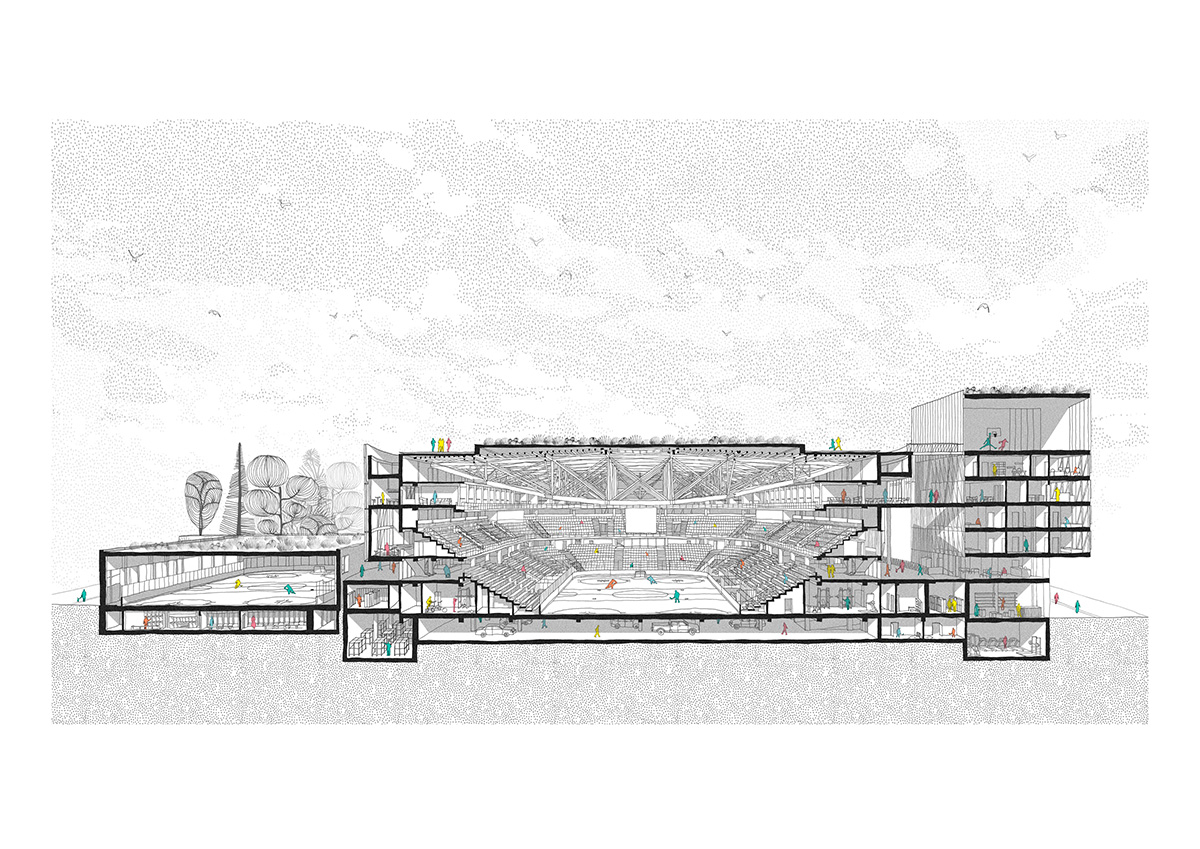 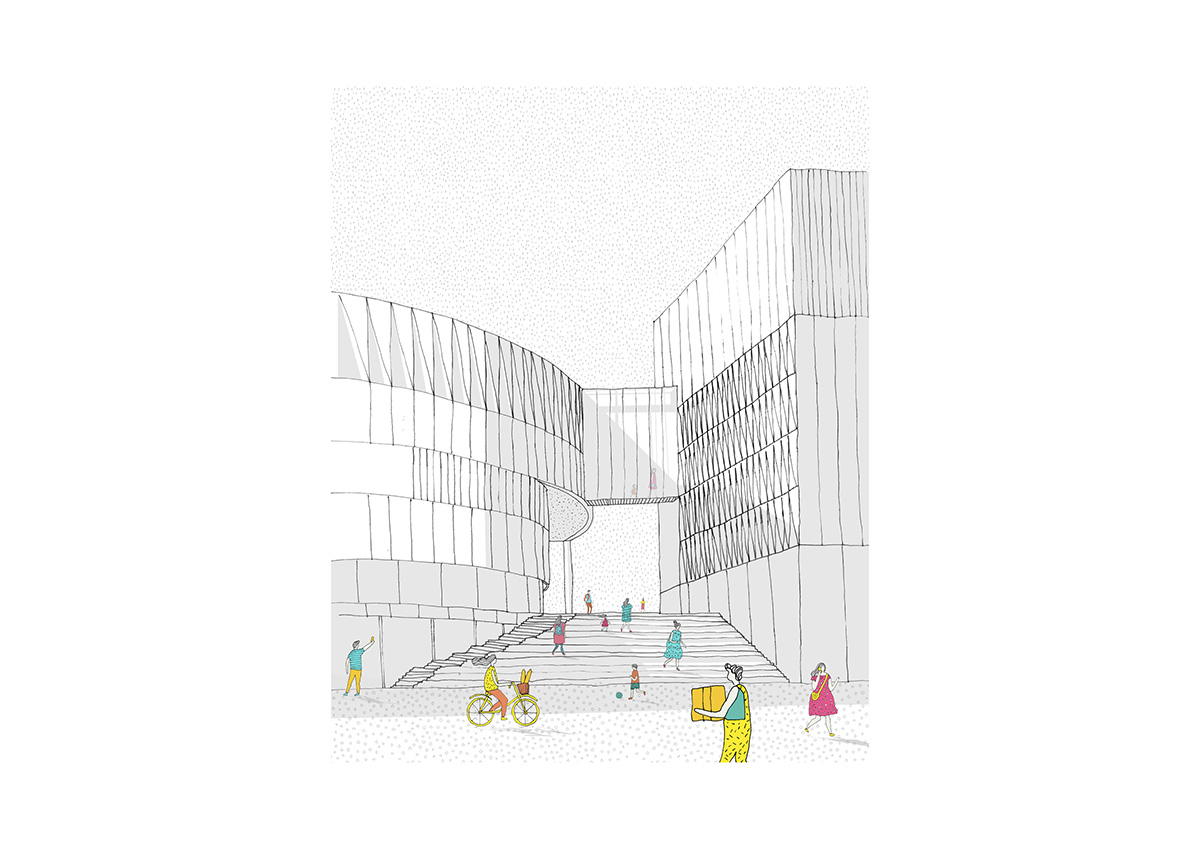 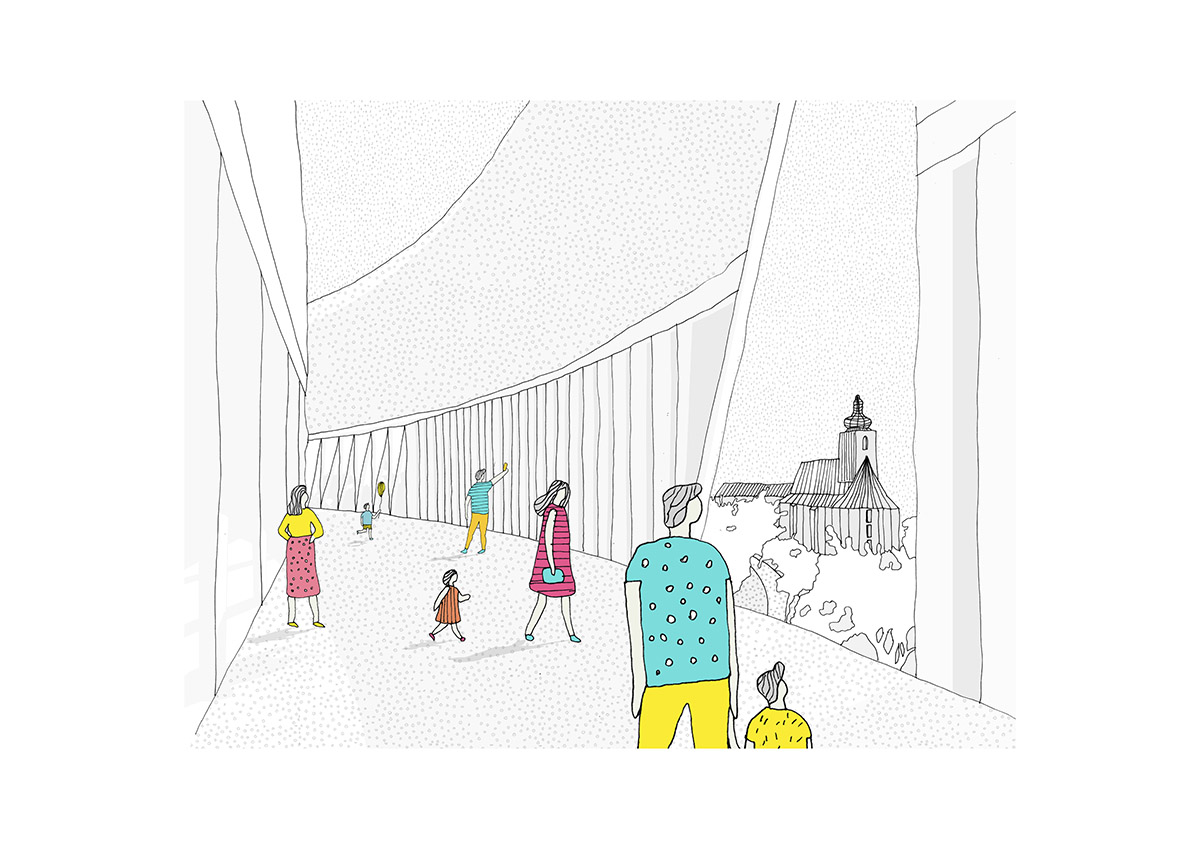 Chybik + Kristof is currently working on Lahofer Winery, one of the studio’s major projects. The project is almost complete. Nestled in the Czech Moravian countryside, the winery fuses the region’s longstanding wine tradition with a contemporary design, reflective of and in dialogue with the surrounding vines.

The practice was also recently amongst the European Centre for Architecture Art Design and Urban Studies’s 2019 40 Under 40 Award winners, following on their award of Architectural Record’s 2019 Design Vanguard Prize.