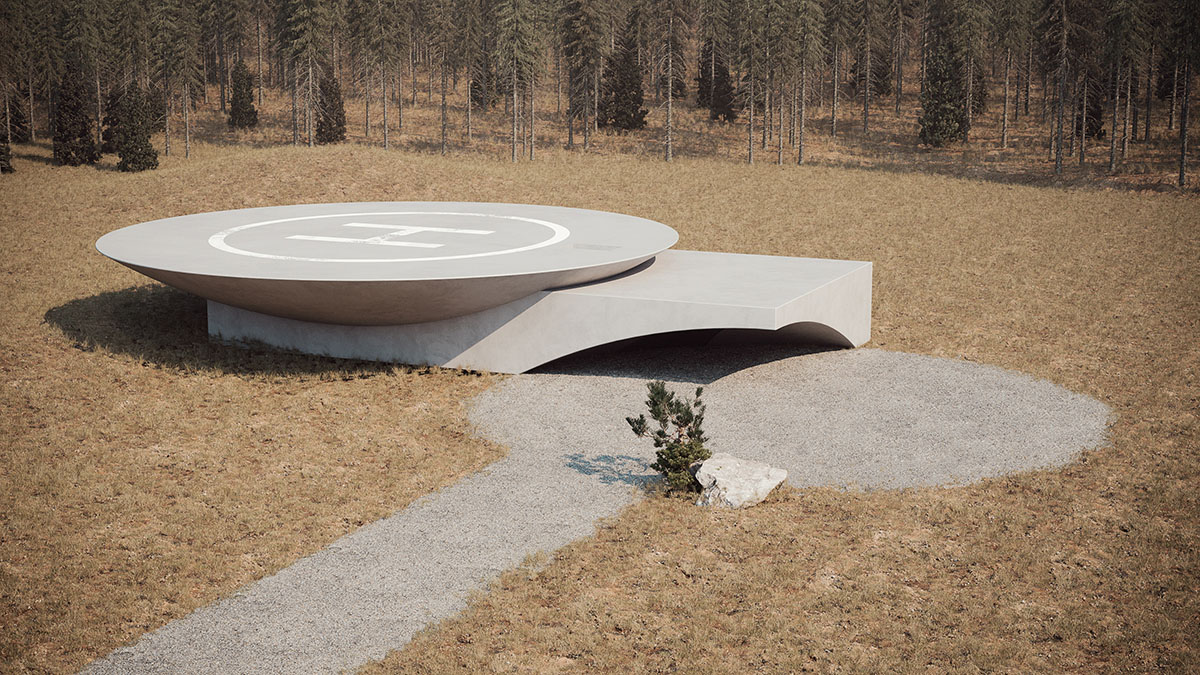 The house, featuring a large helipad onto its circular volume, offers a sculptural appearance and provides no sign showing that it is a private residence. 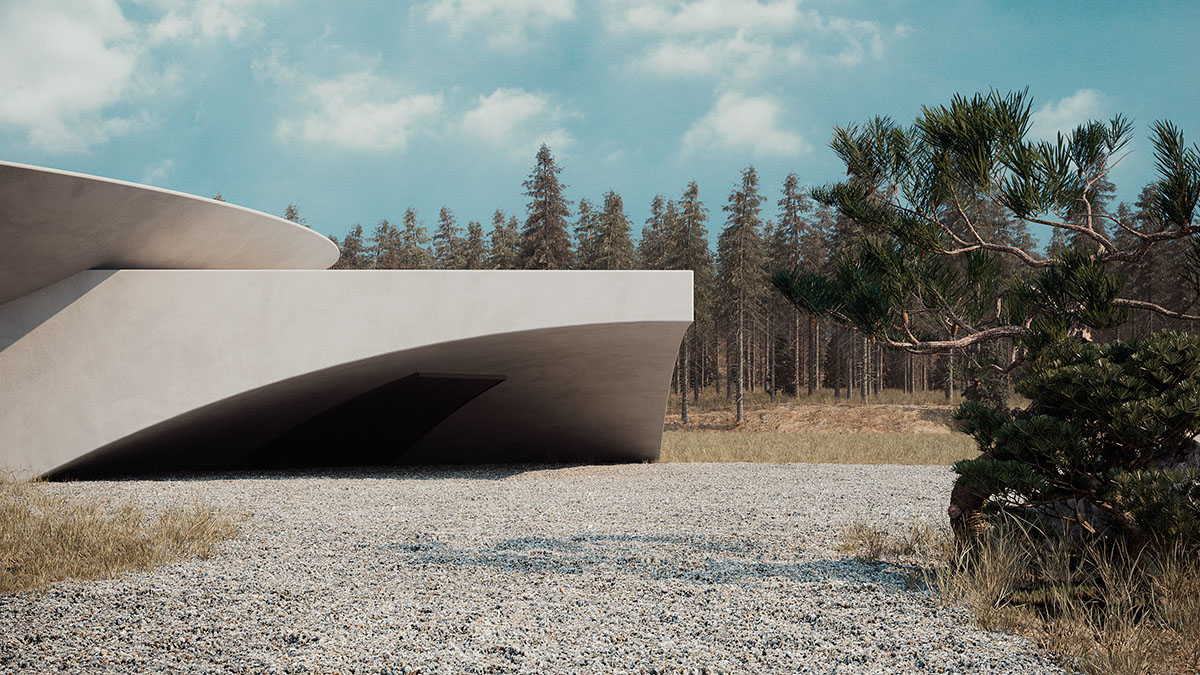 Covering a total of 2,280 square meters area, the concrete house presents a short trip to a depth of 15 metres and below where the users can find their living space.

Envisioned as "an autonomous house", the house features all living spaces and amenities with a comfort and equipment. 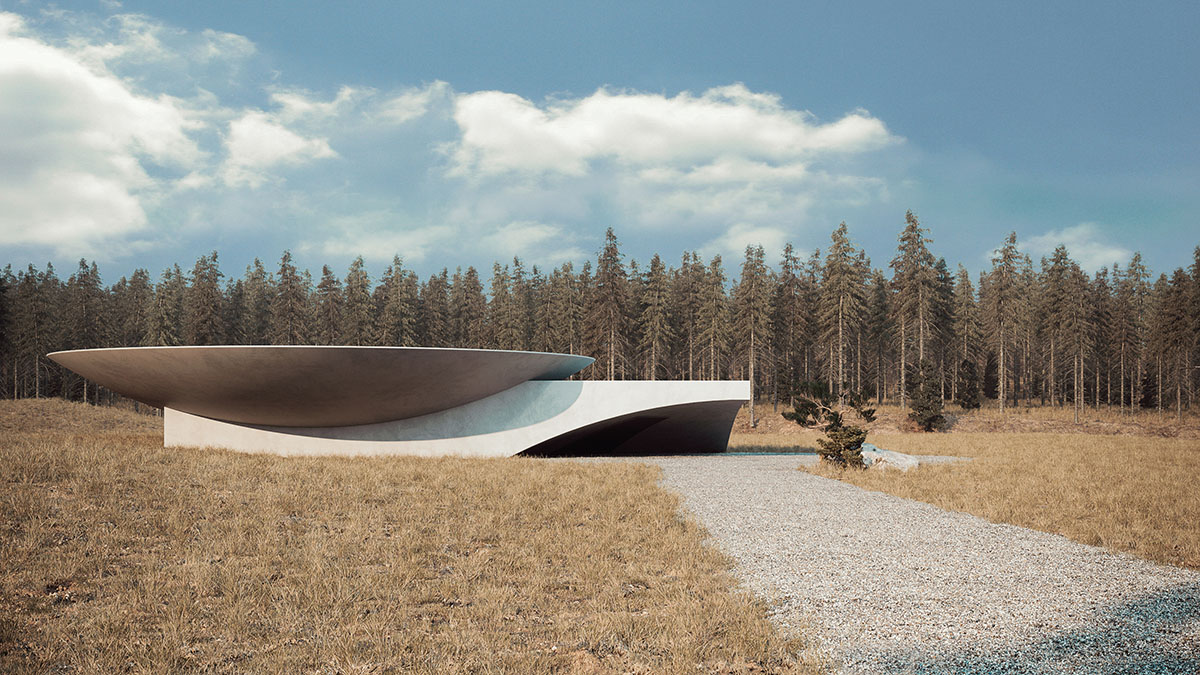 "Our aim was to create a cozy and safe home in the depths of the earth," said Sergey Makhno Architects.

"From the outside, Plan B resembles the entrance to a museum of modern art, or even to a military base."

"We tried to create a simple and concise form, which in all its perspective would speak of reliability, but also be aesthetically attractive, it would not intimidate and lets you in from both the ground and from the air," the team added.

"The massive concrete structure is equipped with three entrances and a helipad on the roof. It occupies only 172 square meters and can be placed either near the main house or, in our case, somewhere in the woods," they added. 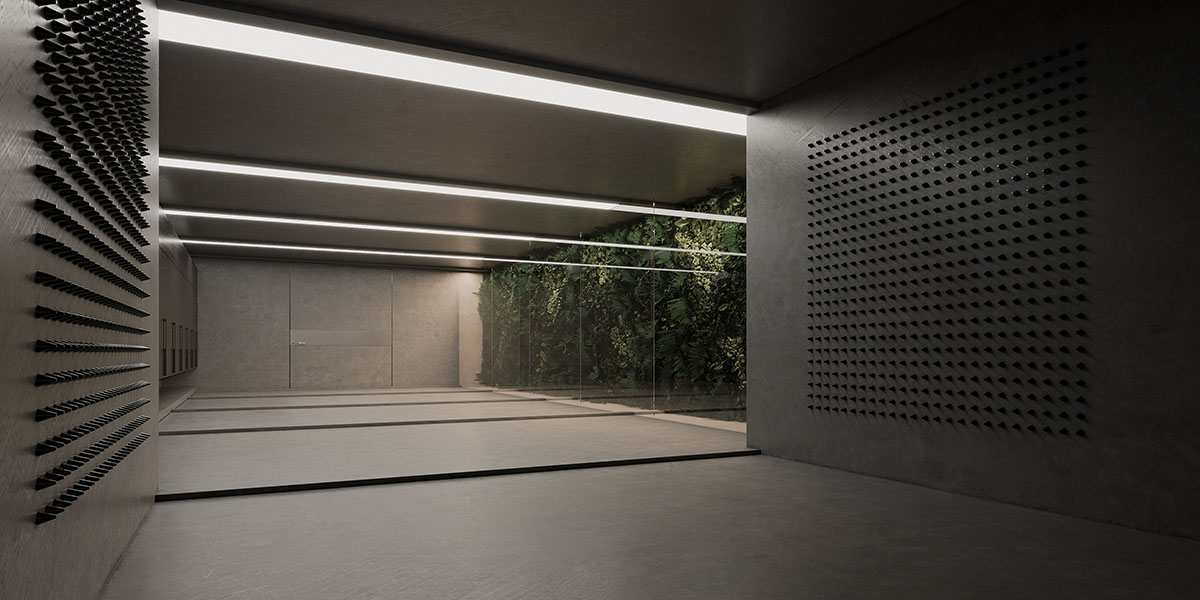 The architects placed all functions underground, including a living space, a floor with a water treatment system and generator, a layer of electrical equipment, and at the very bottom — a well.

The Plan B bunker has three exits, and the fire-resistant evacuation "ring" can be reached from almost anywhere. This is done in case of the event of danger inside the bunker, its inhabitants do not spend time getting out (especially given the floor area), but can immediately get to the evacuation route, for example, from the bathroom or gym. 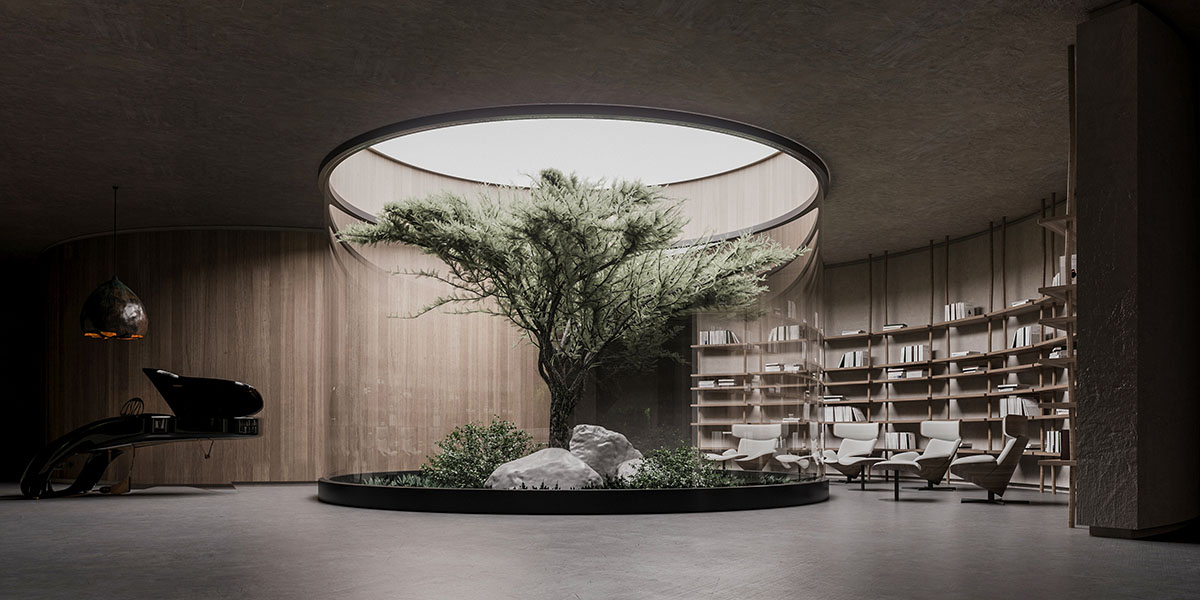 As the architects highlight, all systems in the Plan B underground building are autonomous: water supply, sewerage, closed ventilation system with recuperation, intake, and air purification.

The architects stated that "whatever happens on the Earth's surface, life in Plan B will continue." 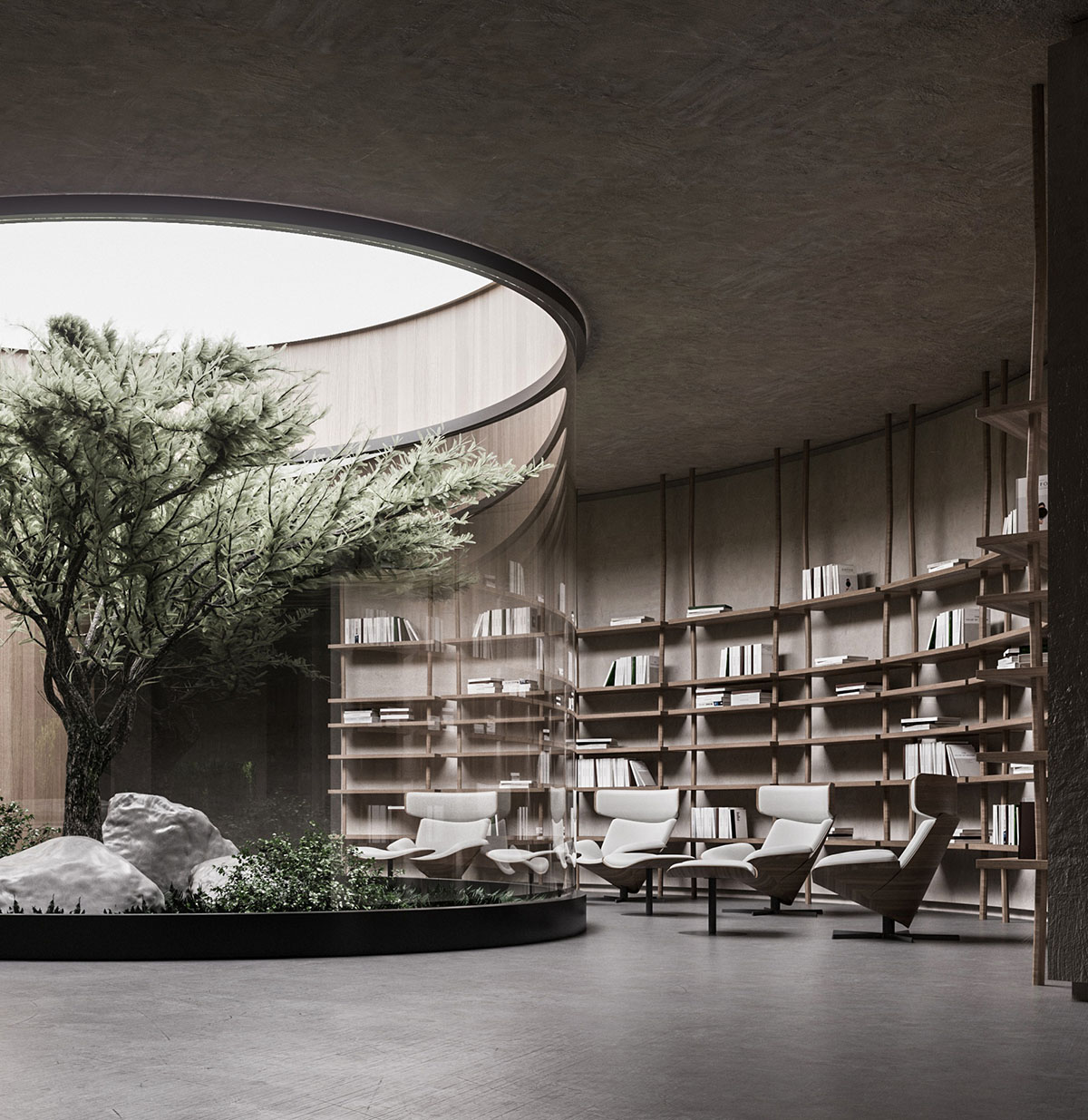 The house is in initial development phase. The studio explained that the systems will be developed in detail at the project stage together with specialized contractors. At present, the architects have developed a design proposal for the bunker, with their own vision.

The main building mass is reinforced concrete, the strongest duo, and the optimal cost. The doors are automatic but have the option of manual control. Directly next to the entrance to the bunker, there is a disinfection shield, behind it — a quartz zone. 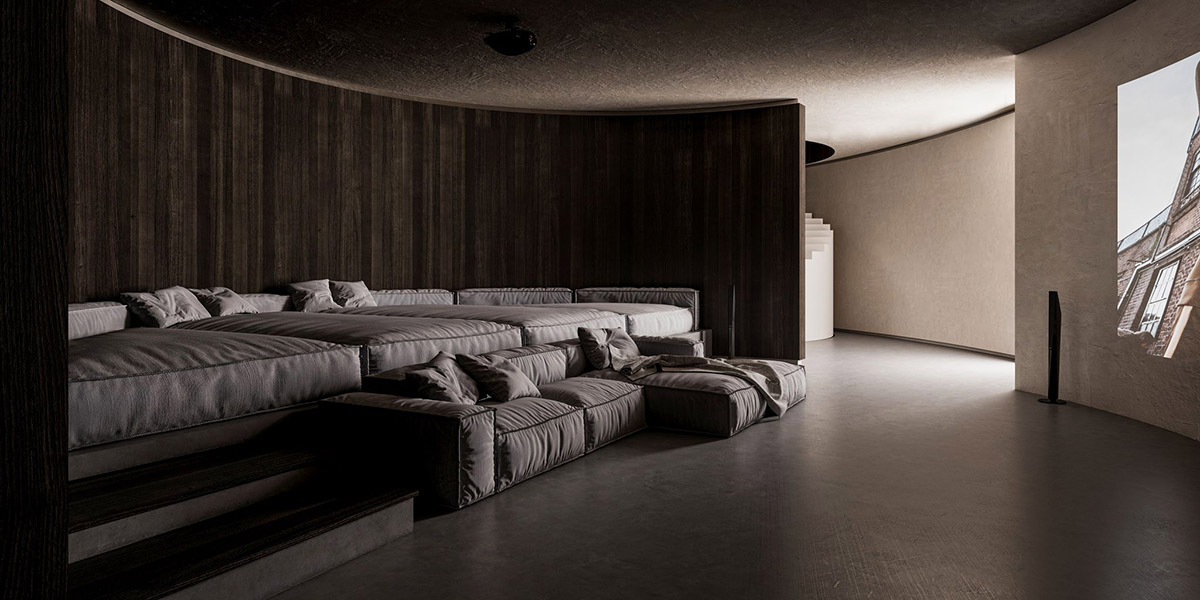 The main spiral staircase and elevator lead to the underground building, as well as two flights of spiral staircases for staff and loading stocks — so the flows are distributed and do not interfere with each other.

The studio has also arranged a fish pool. In a separate room, there is a garden with Phyto-equipment, where you can grow vegetables and some fruits. Also on the living floor, there is a large warehouse of food. Staff rooms are grouped in a separate area. 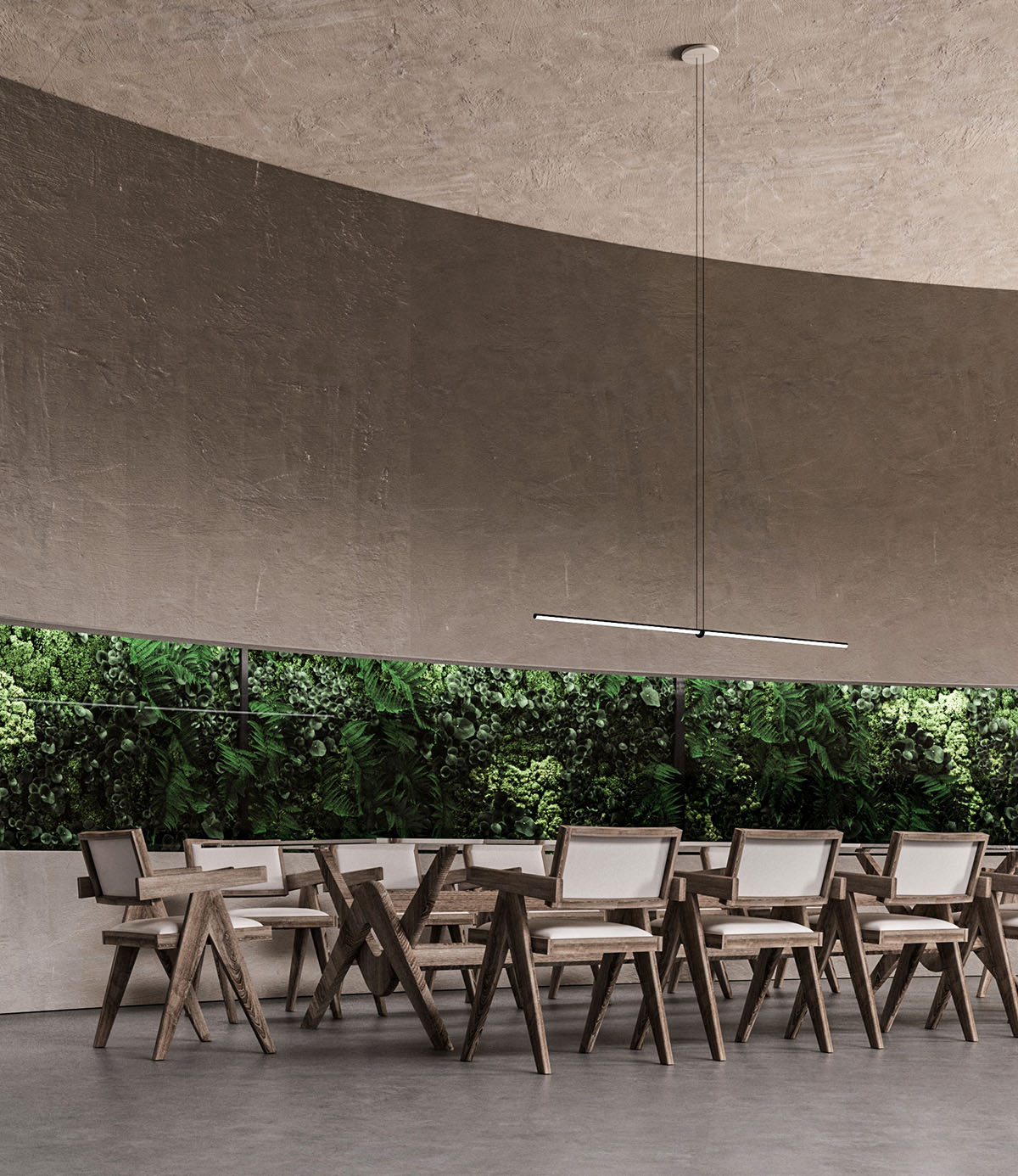 In the underground building Plan B, there is a separate room for medical care, with an isolator and a closed area for storing stocks of medicines. 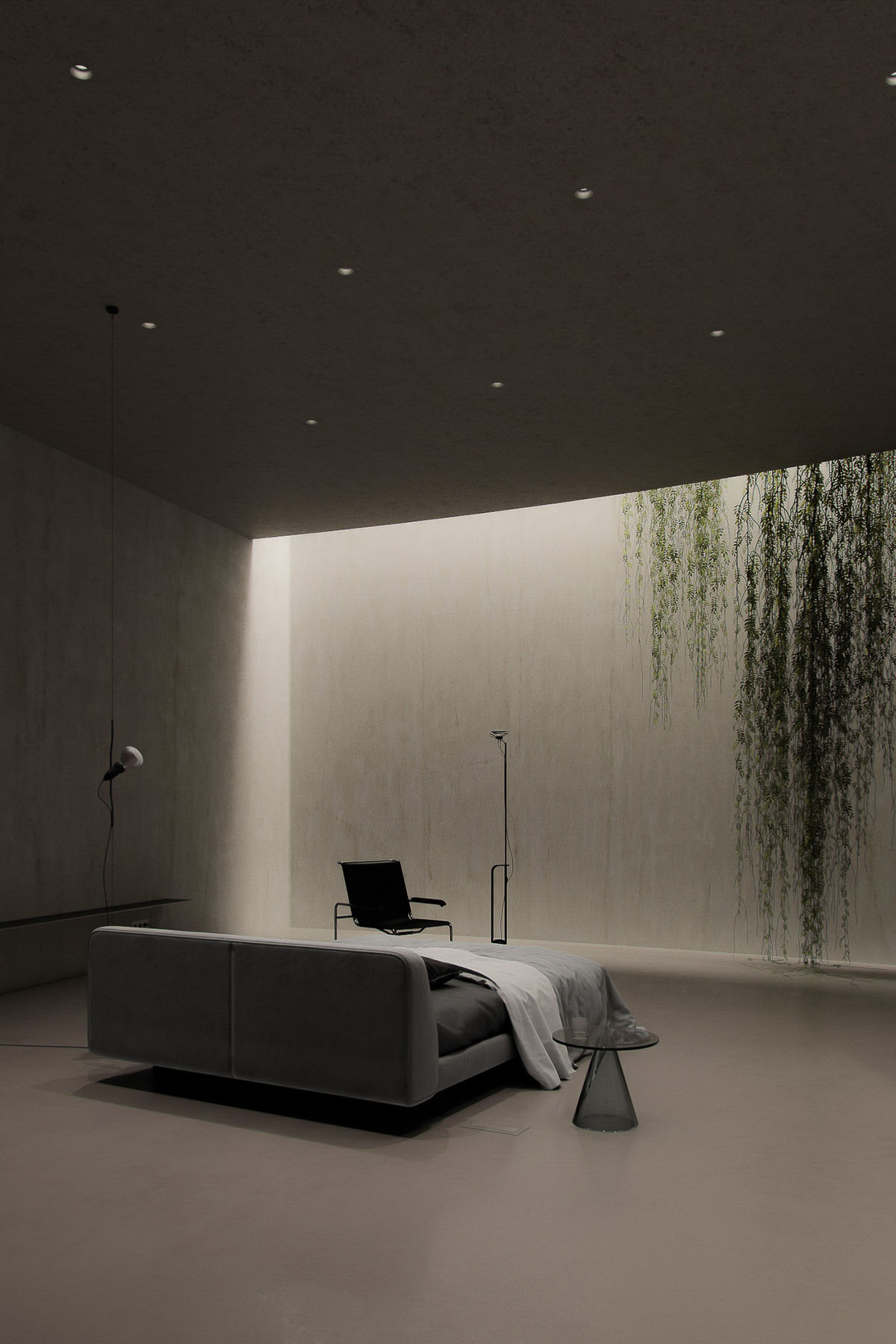 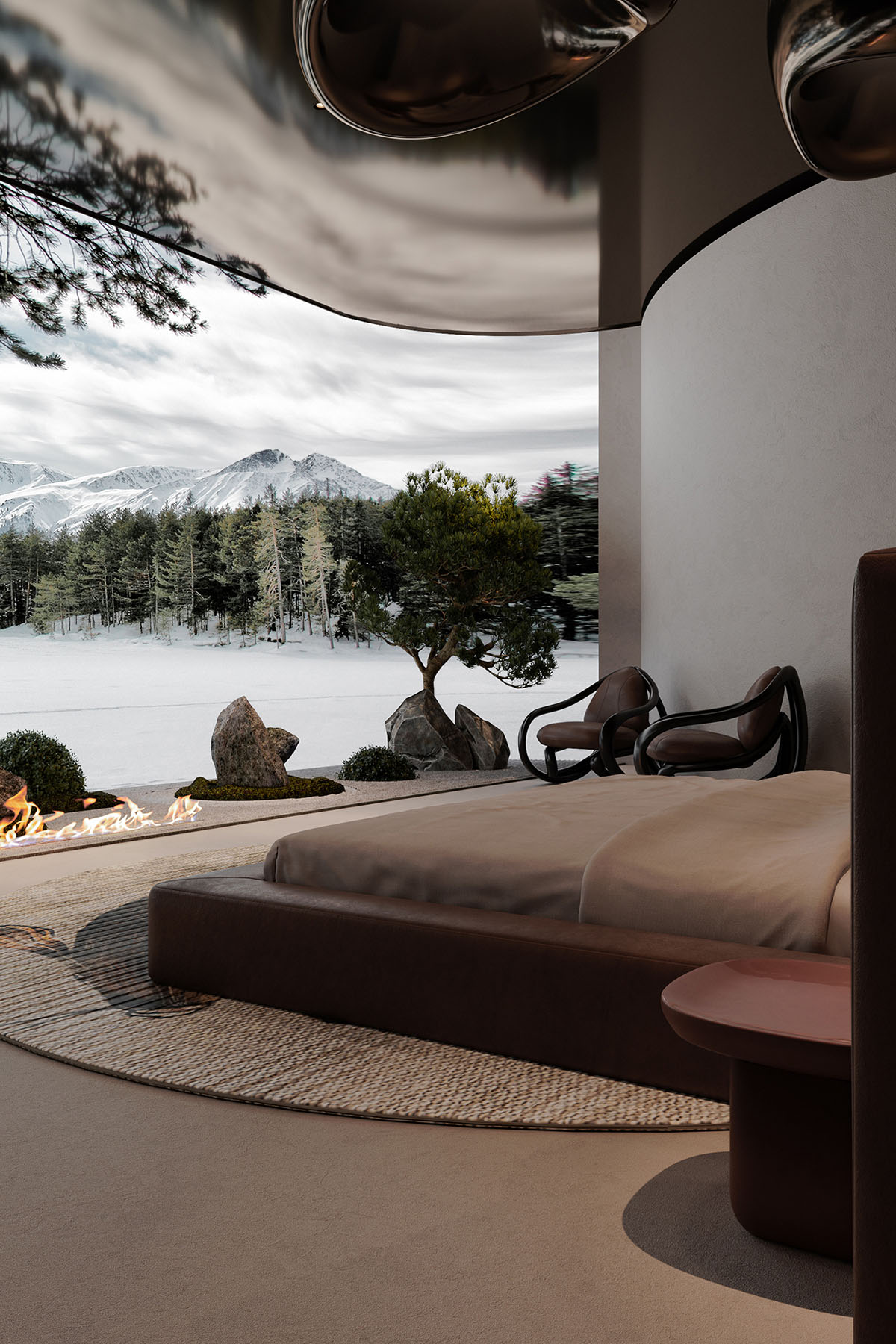 The project proposal provides comfortable living for two or three families with children and staff with their families.

If necessary, the project can be redesigned for a much larger number of people, but at this stage, the studio is interested in experimenting with the underground space in such a way as to create the illusion of being above the surface — as if you could look out the window and see the blue sky. 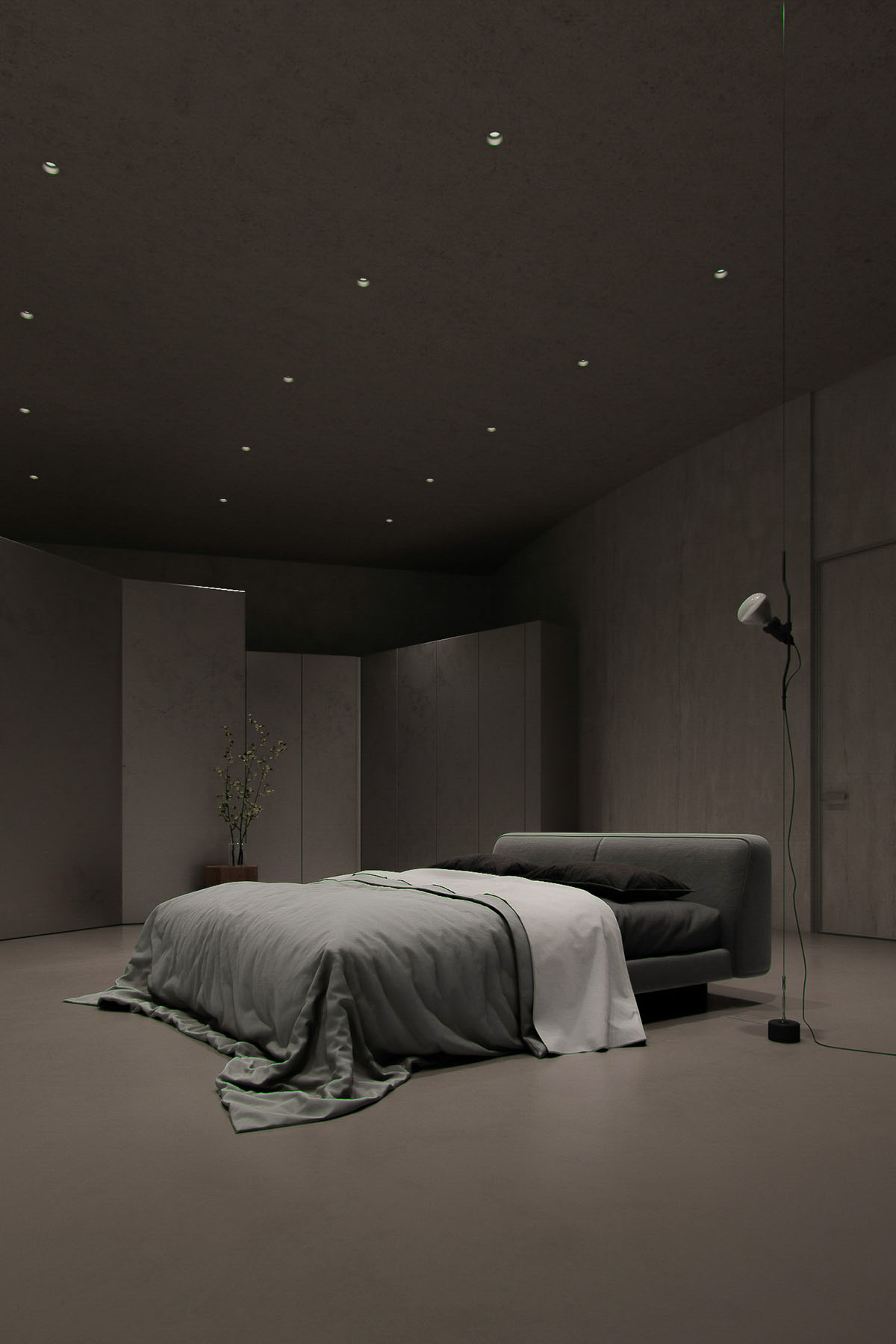 Plan B has two master bedrooms, which consist of a sleeping area, an enclosed storage area for things, and a bathroom. "The main task in designing both was to change the awareness of space and its boundaries," added the architects.

The architecture of the house has the lack of sharp angles — the shape of the room is almost cylindrical. This technique is not often used in terrestrial architecture, but here it immediately helps the studio to create the illusion of infinity, as if the walls do not exist. 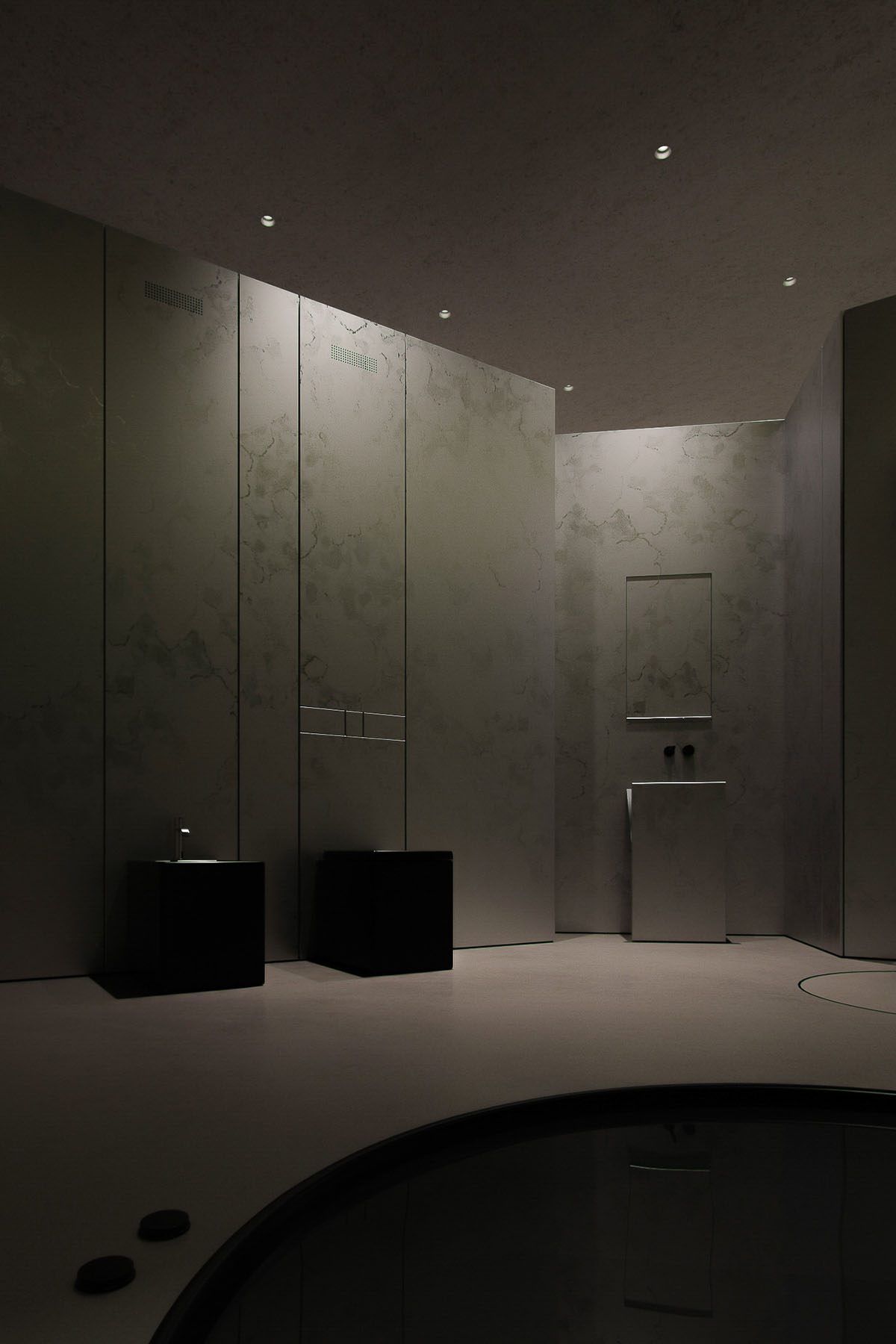 Opposite the bed, there is a stone garden, which ends with a highly sensitive screen-window, the view of which can be changed at a touch of a button on the control panel of the Smart Home system — for example, snow-capped mountains or a sleepy morning street in Kyiv. Moreover, you can "open" the window and feel a light breeze or a smell of freshly cut grass. 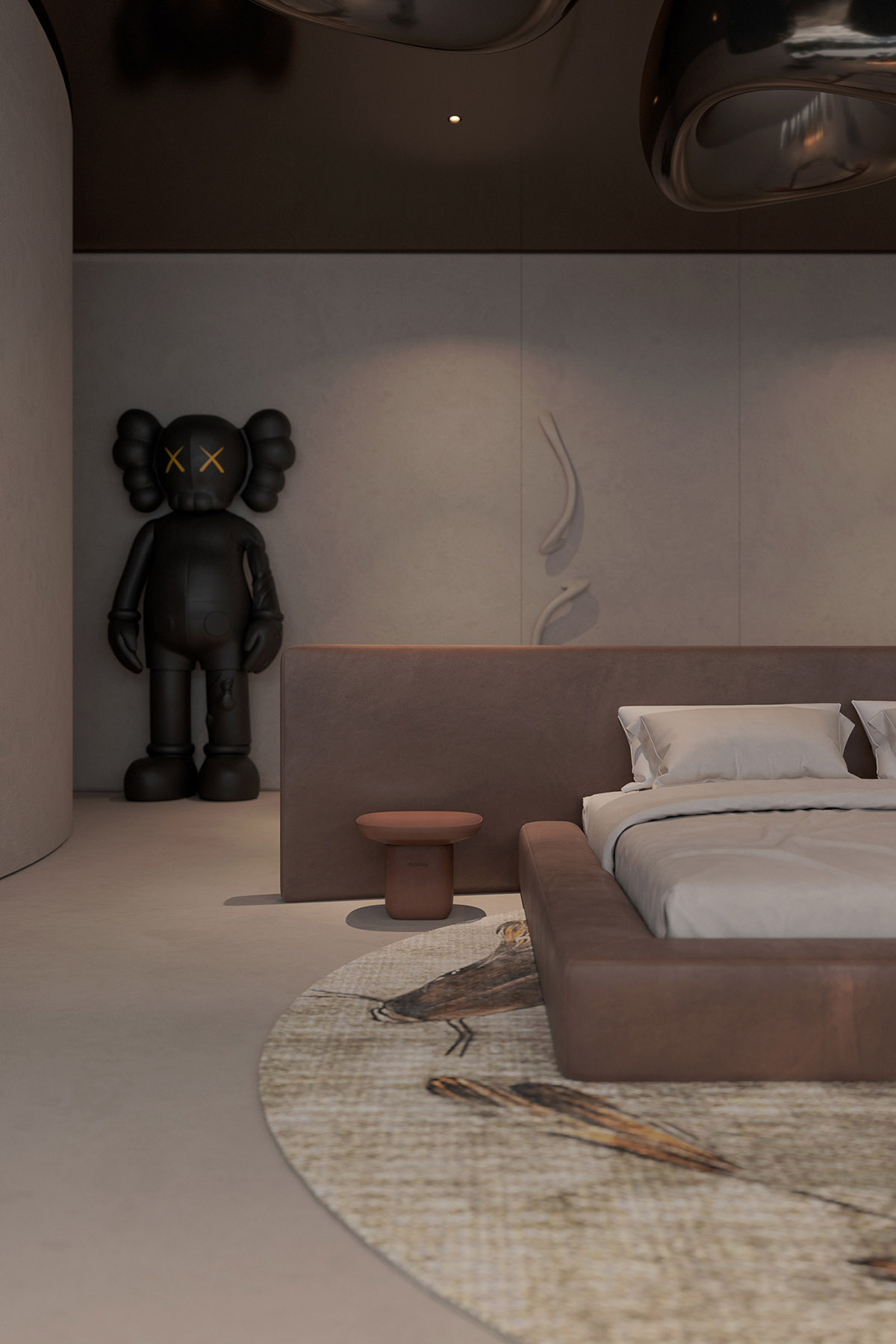 "Modern people are too accustomed to freedom and lack of restrictions. Life in a bunker, even a very comfortable one, is life within frames. We tried to design the space so that people could feel them minimally," said a co-author of the project, architect Ihor Havrylenko.

Plan B did not forget about possible pets, equipping a special area for walking dogs. Here everything is at a maximum as on the street: wood, stones, grass. The evacuation circle can also serve as a place for long walks and for cycling. 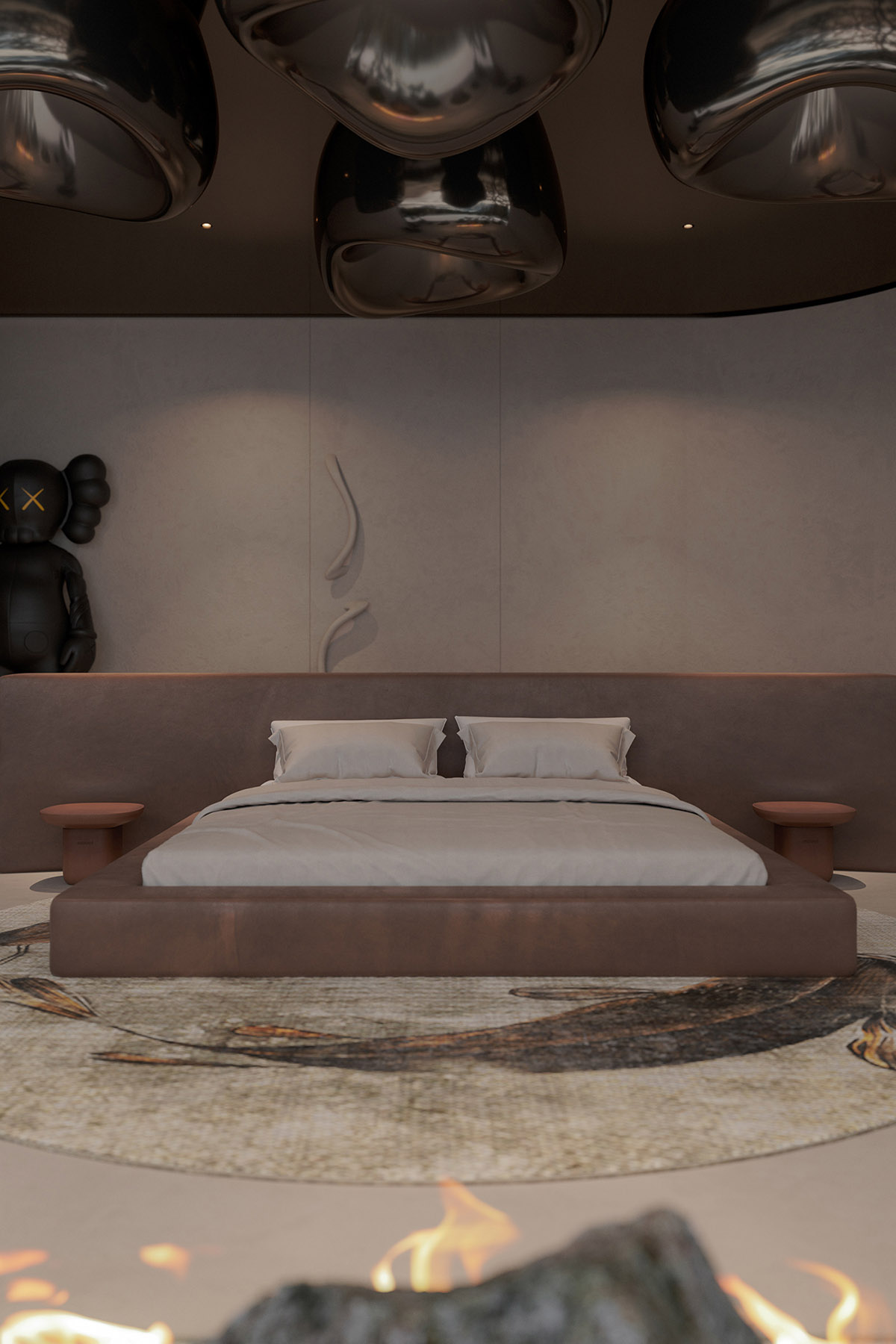 "We tried to convey the physical world as much as possible at the expense of materials and simplicity of decisions. And the intangible world — at the expense of architectural techniques, technologies, and human imagination."

"This project is a release from emotions, a reflection on the continuation of human life under any circumstances, and an attempt to find an answer to the question of whether architecture can create the impression of life at the surface while being in its depths," explained Serhii Makhno. 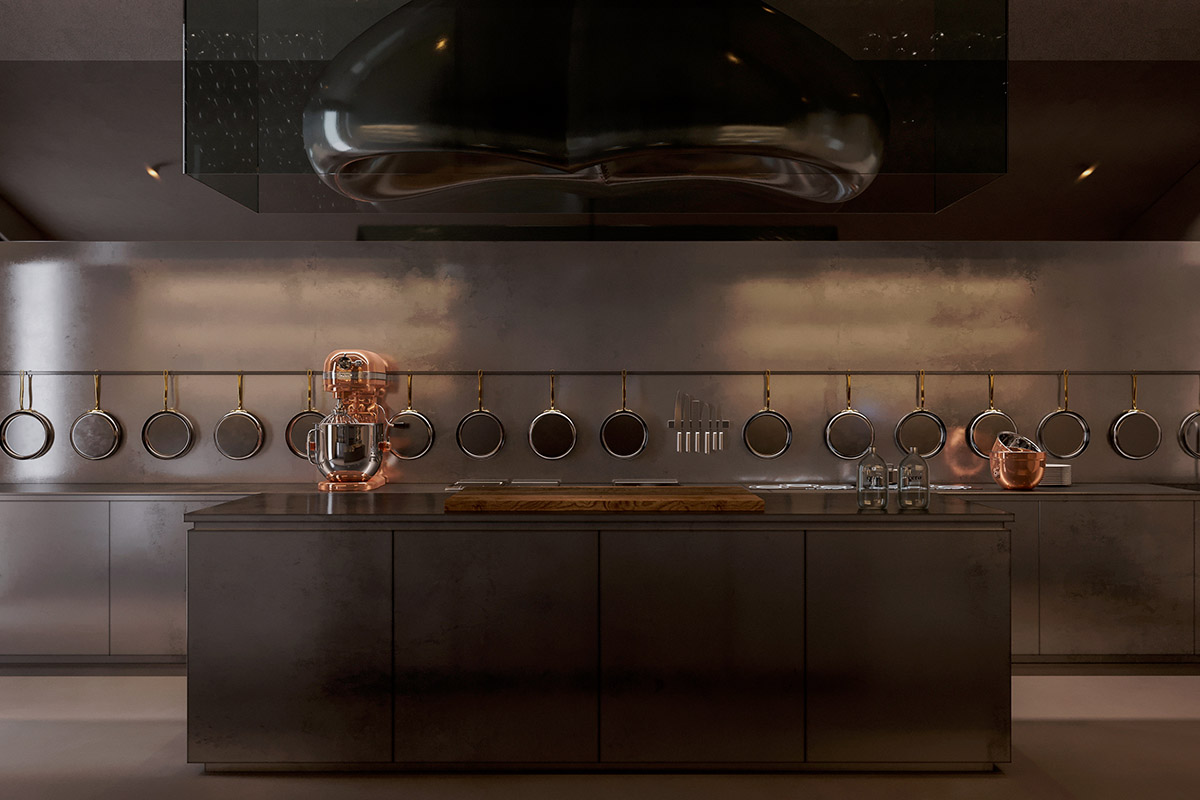 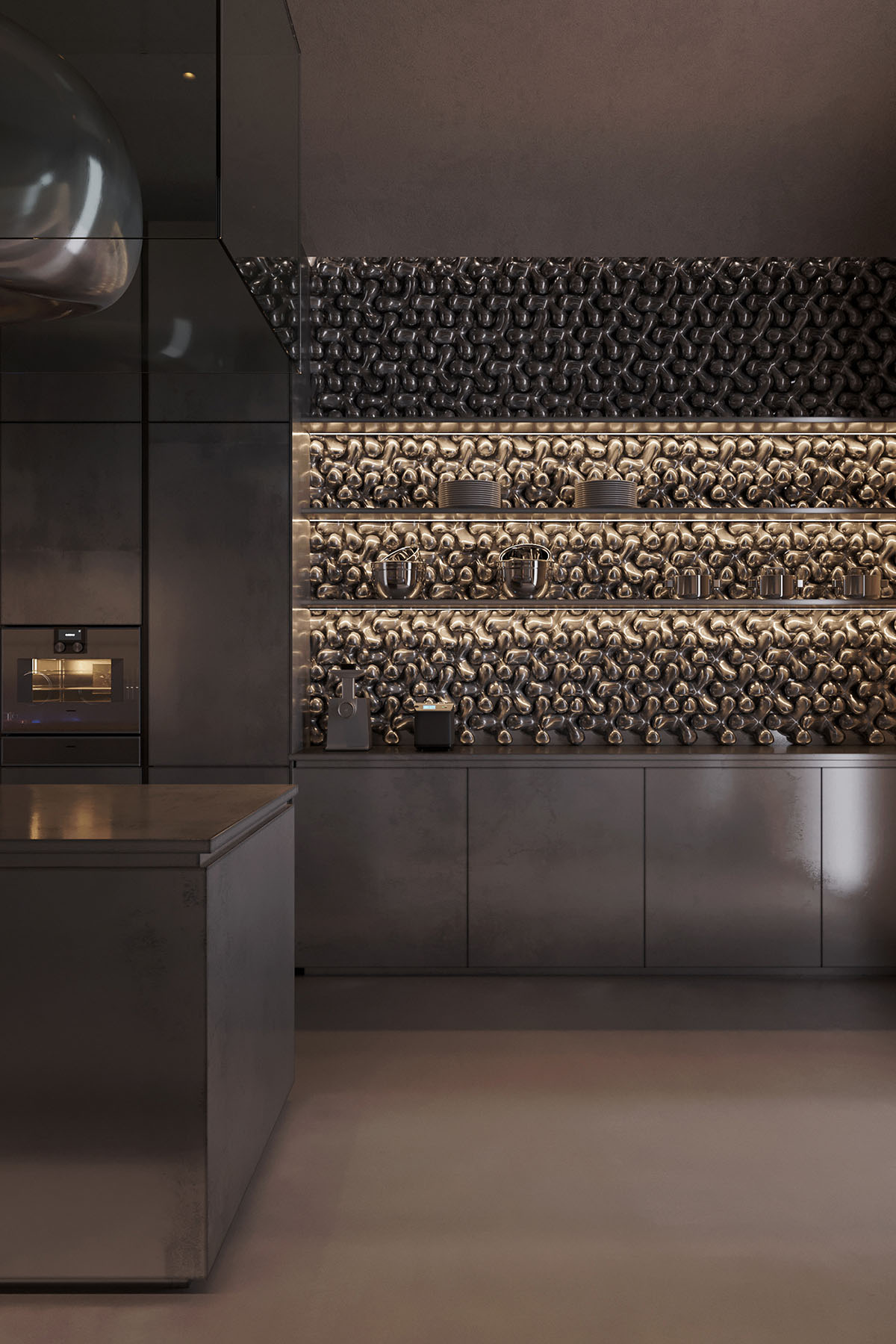 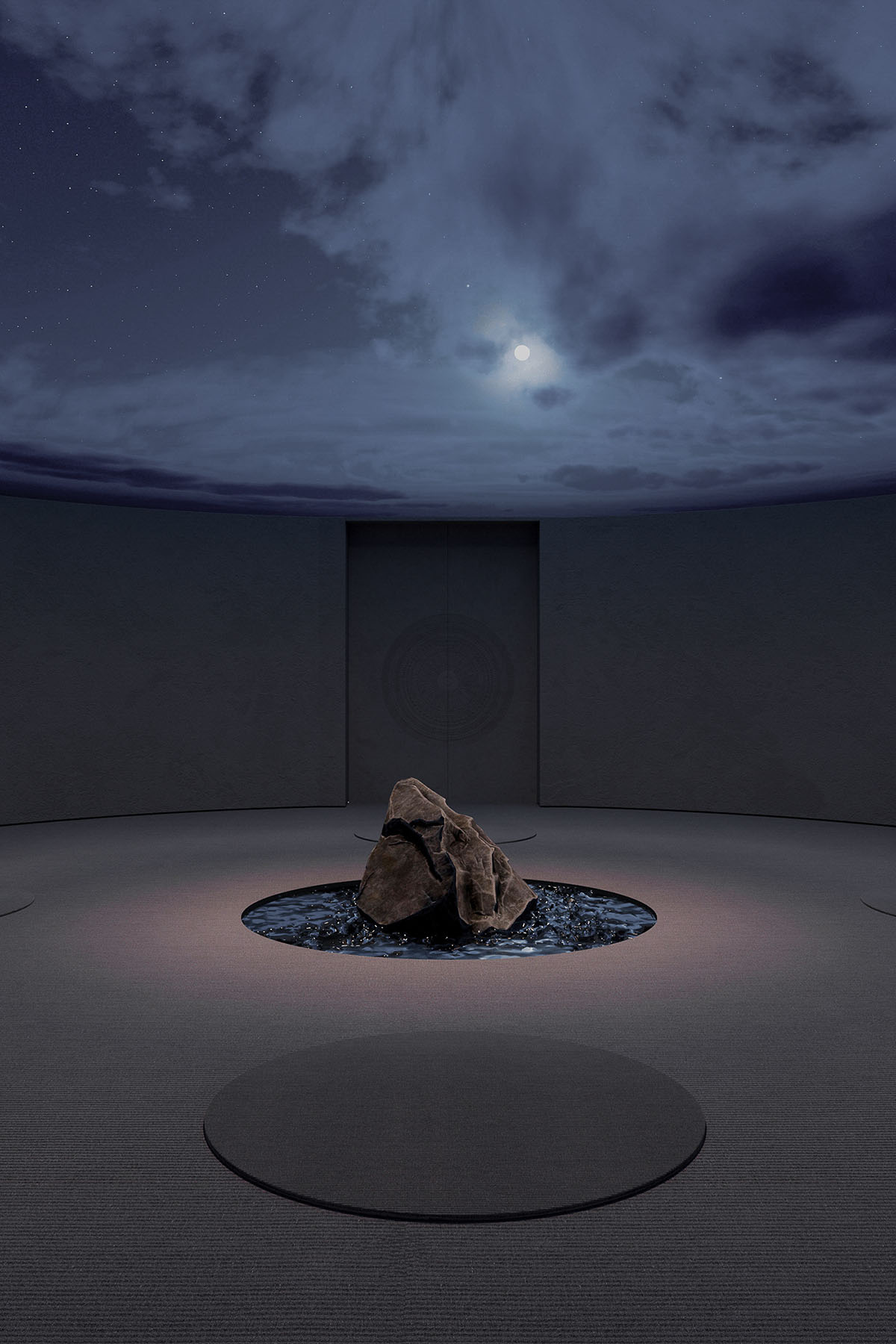