OMA and LOLA revise design for Feyenoord Stadium in Rotterdam 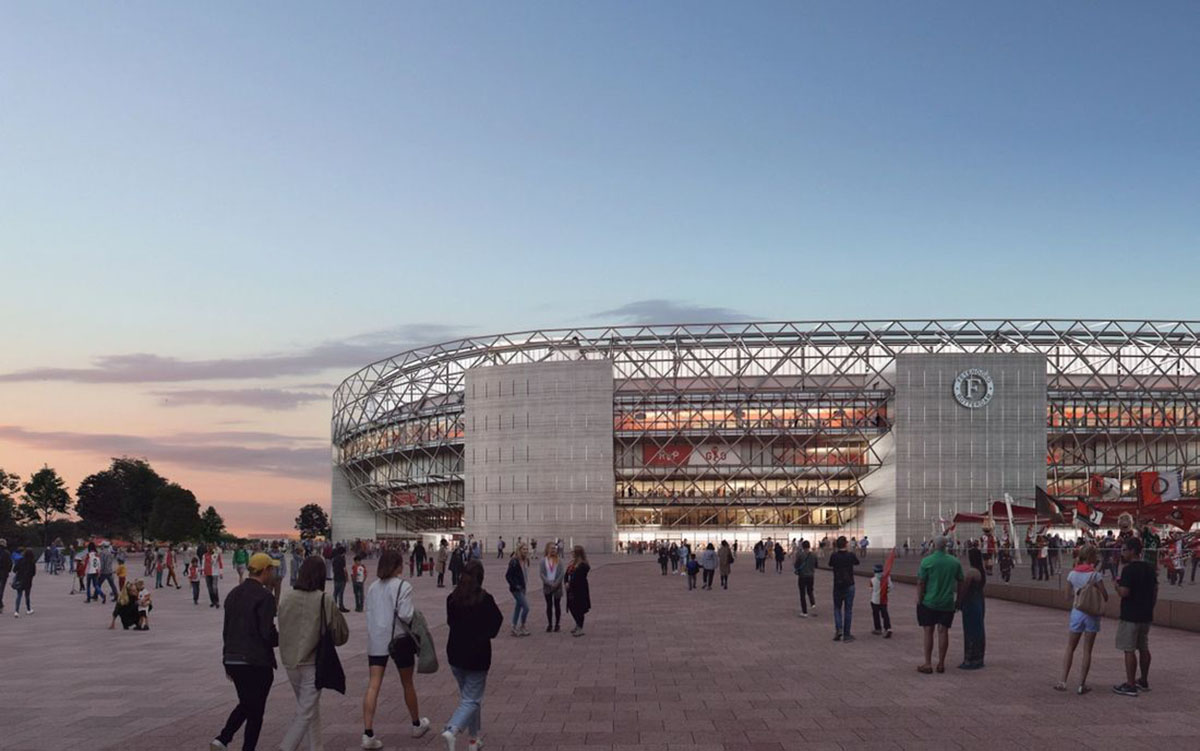 OMA and LOLA Landscape Architects have revised design for the Feyenoord Stadium in Rotterdam, the Netherlands, OMA had unveiled its first preliminary plans in 2018 and the new images show that more details and concrete materiality have been implemented to the structure.

The team submitted the finalized plans to the Quality Team in Rotterdam on June 19, 2020. As OMA highlights, in the new plans, the "original design of the stadium has been optimized to ensure on time and cost-effective delivery, while reinforcing its integrity as a vital iconic building within the Feyenoord City masterplan." 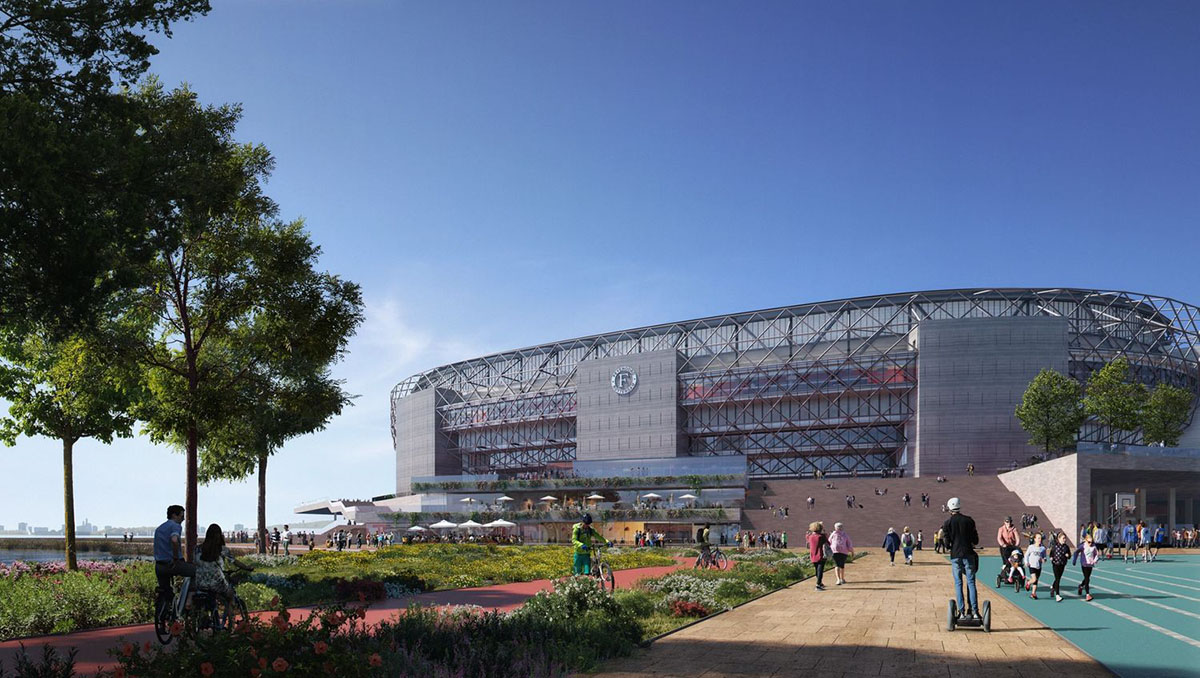 The 63,000-capacity stadium, proposed by OMA, Feijenoord Stadium and the Feyenoord Football Club, is located at a new location along the river Nieuwe Maas and a highly accessible transportation node and is designed as "a future-proof infrastructure" for football and daily activities in the surrounding communities.

The stadium is conceived as an "ensemble of essential elements"—including the stand, circulation cores, the structure, and functional spaces—each of which have been designed to maximize performance. 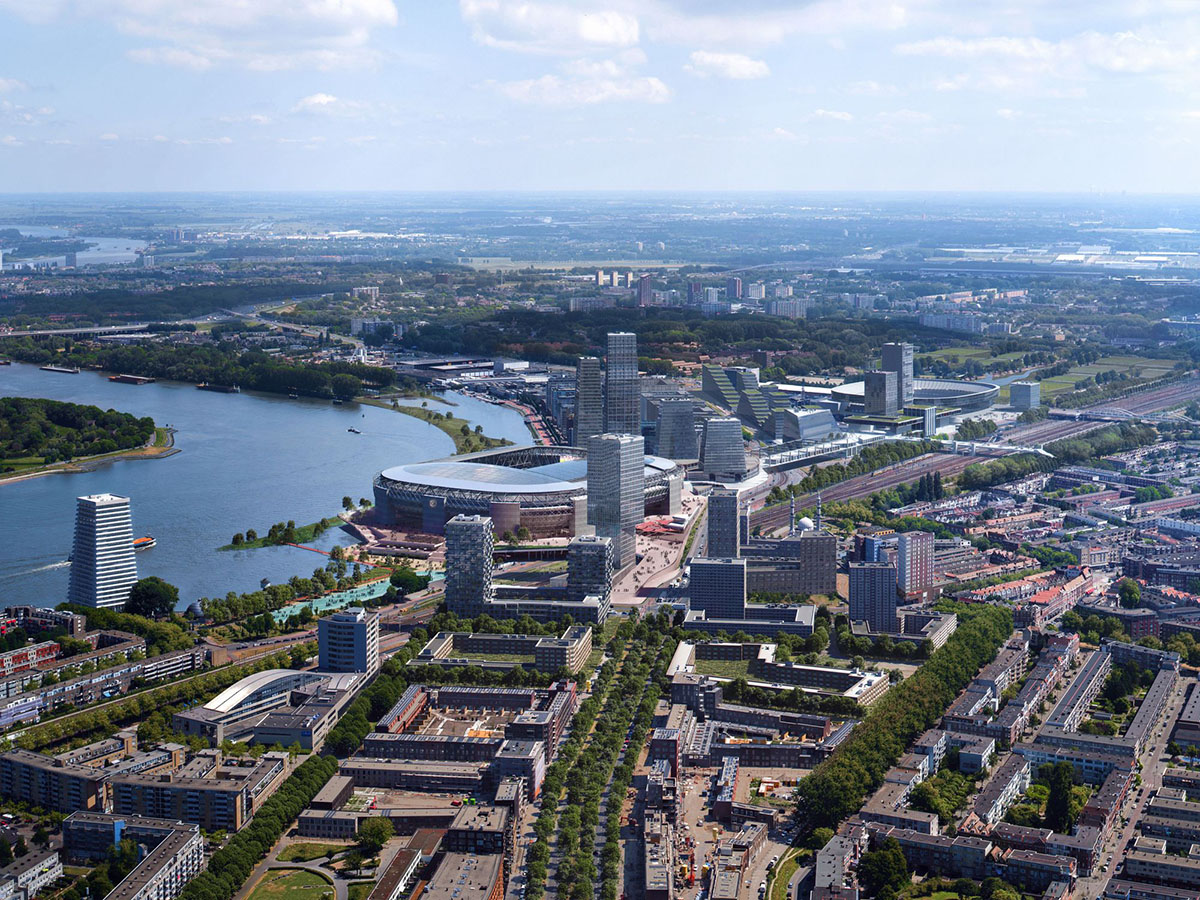 "Specifically, the three-tier stand increases the stadium’s capacity to 63,000, while placing spectators as close to the field as possible for an intimate match experience," said OMA.

"The bowl-shaped steel structure—a diagrid that requires less structural steel than a conventional steel frame—is the primary structure supporting the stand and its roof."

OMA and LOLA assembled all the stadium’s elements in a single form that is more than the sum of its parts: logical and functional as De Kuip—the football club’s home for eight decades—and offering one of the best sightlines among stadiums of this scale. 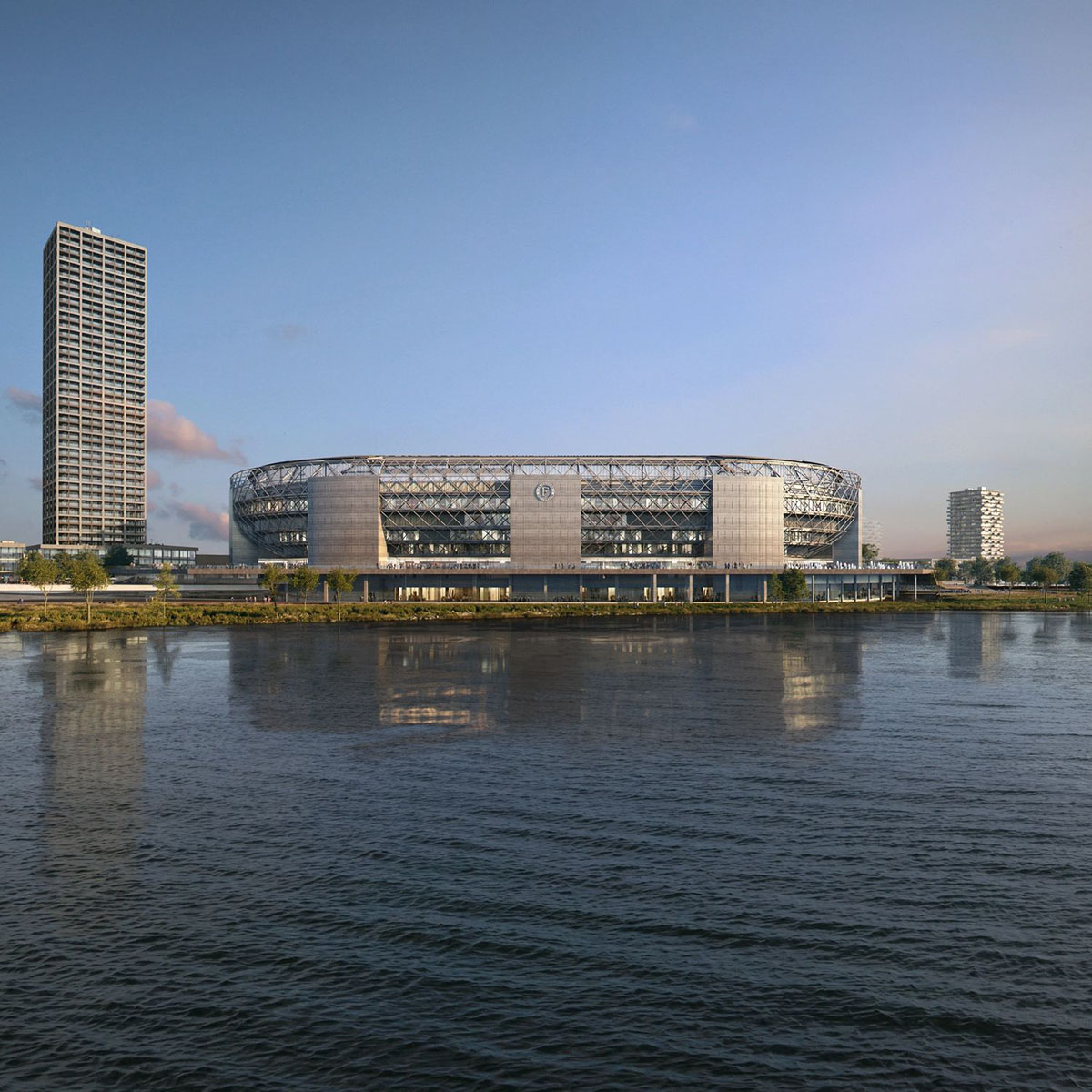 "The new venue is a truly open stadium with a public concourse on the main entry level," added OMA.

"Designed in close collaboration with LOLA, the concourse is the heart of the public space. The landscape concept consists of strong access points from both sides of the city and reinforcement of the continuous river bank, including a tidal park and urban connection with the ring road."

"On match days, crowds will gather at the concourse before entering the stadium, while the concourse design will also distribute several slow traffic routes along the water and into the surrounding neighborhoods," the firm added. 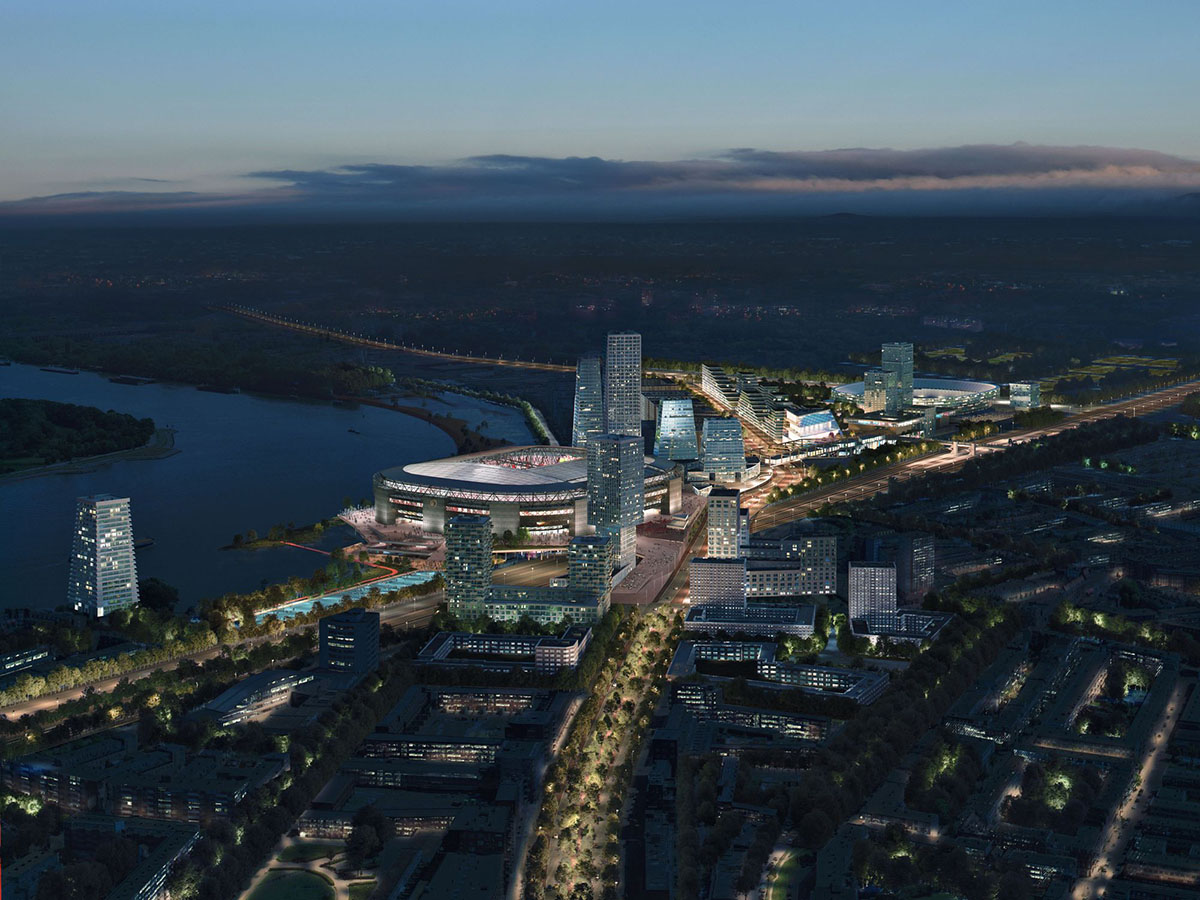 According to the team, the concourse will act as a raised square: a place to enjoy the view and many activities all year round, both during event days and non-match days.

The new stadium is developed as part of the Feyenoord City masterplan, developed by OMA and LOLA, the masterplan was adopted by the Rotterdam City Council in October 2019. 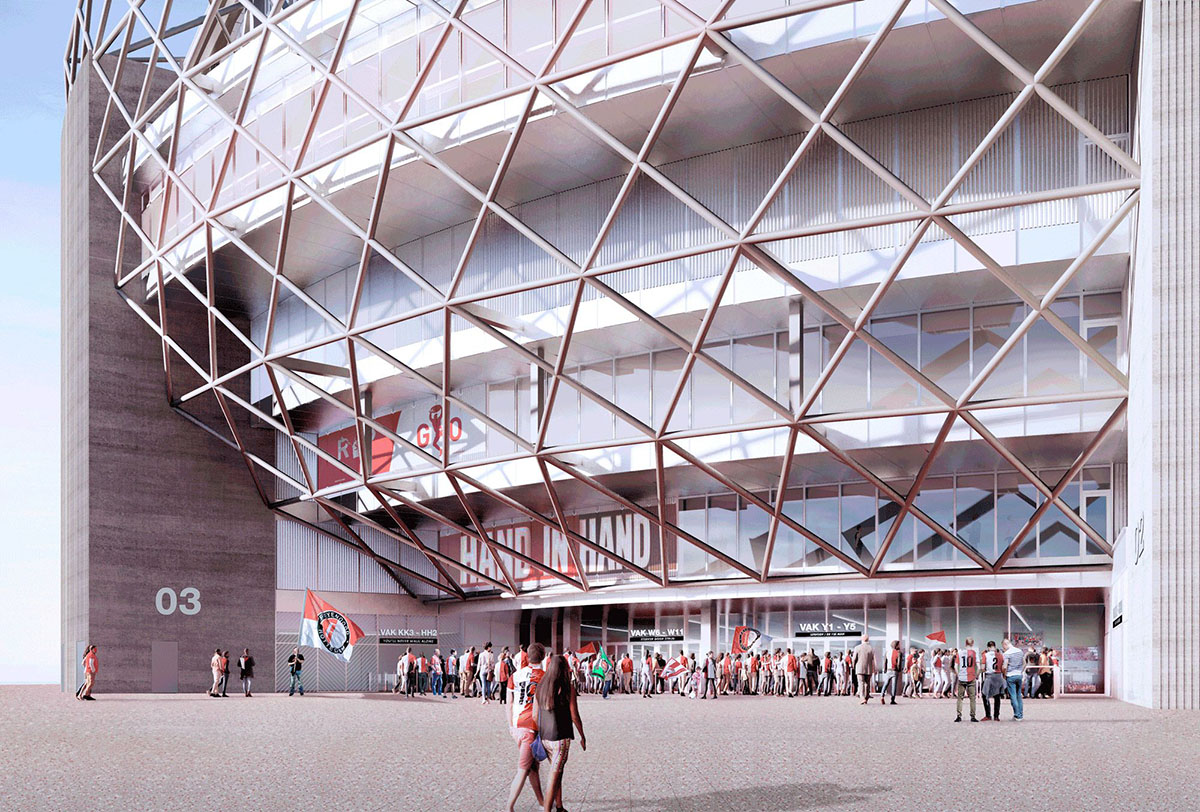 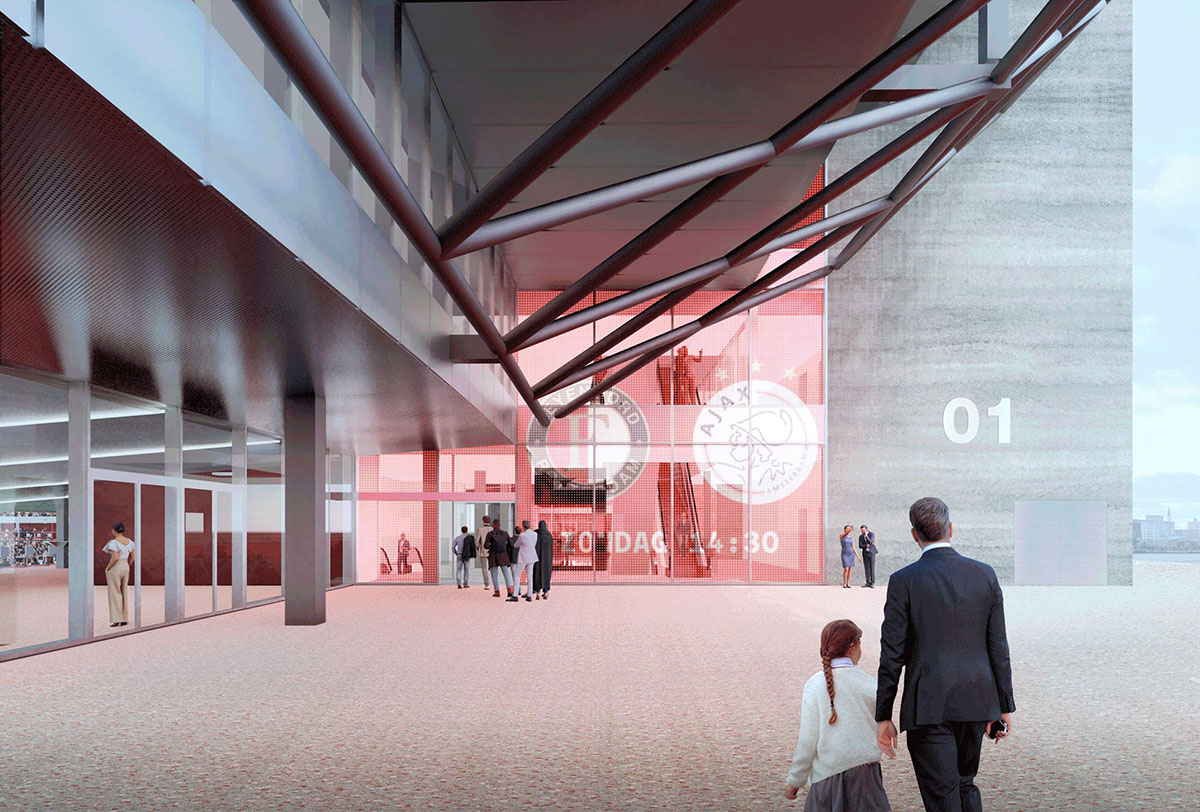 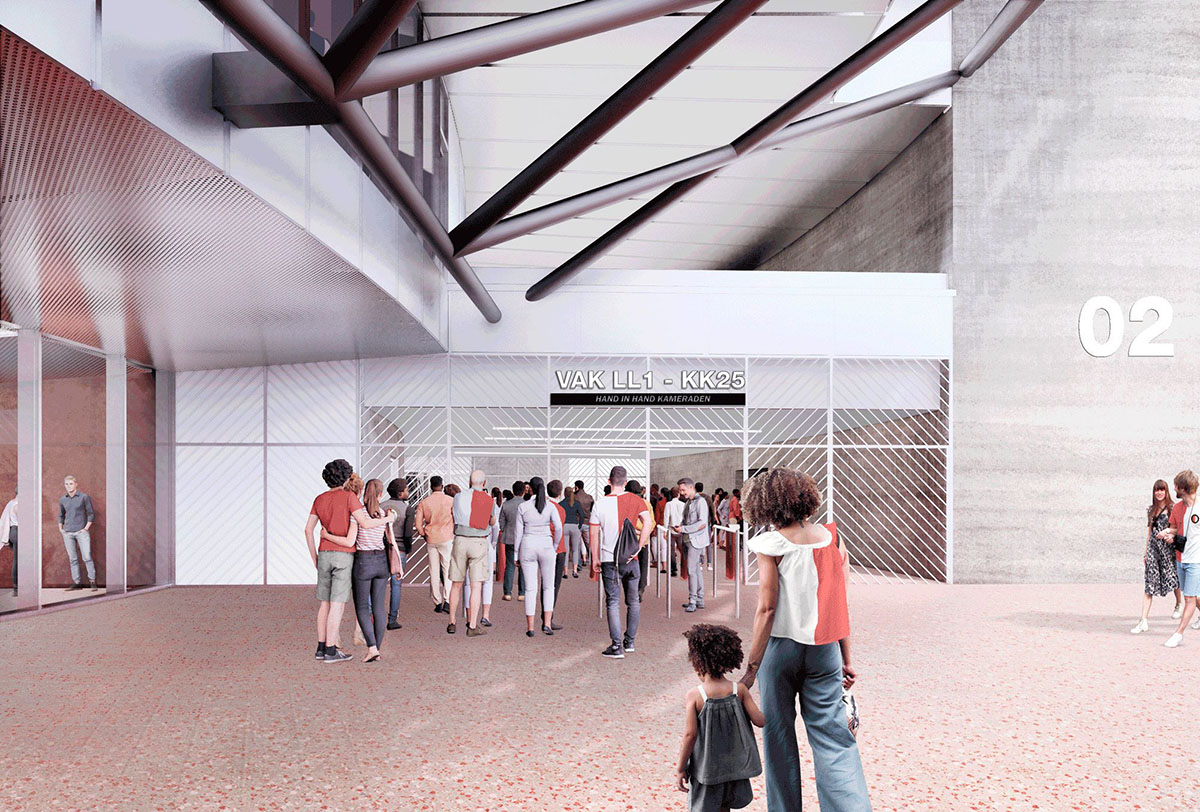 The team is also working with developer Stichting Gebiedsontwikkeling aan de Maas, the Municipality of Rotterdam, Stadium Feijenoord, and multiple other stakeholders.

OMA has submitted the building permit and finalized detailed design for the Feyenoord Stadium this summer. Construction is scheduled to begin in 2022, with the building’s completion in 2025.

Top image © Beauty and The Bit