Reinventing the Urban wheel in time and space 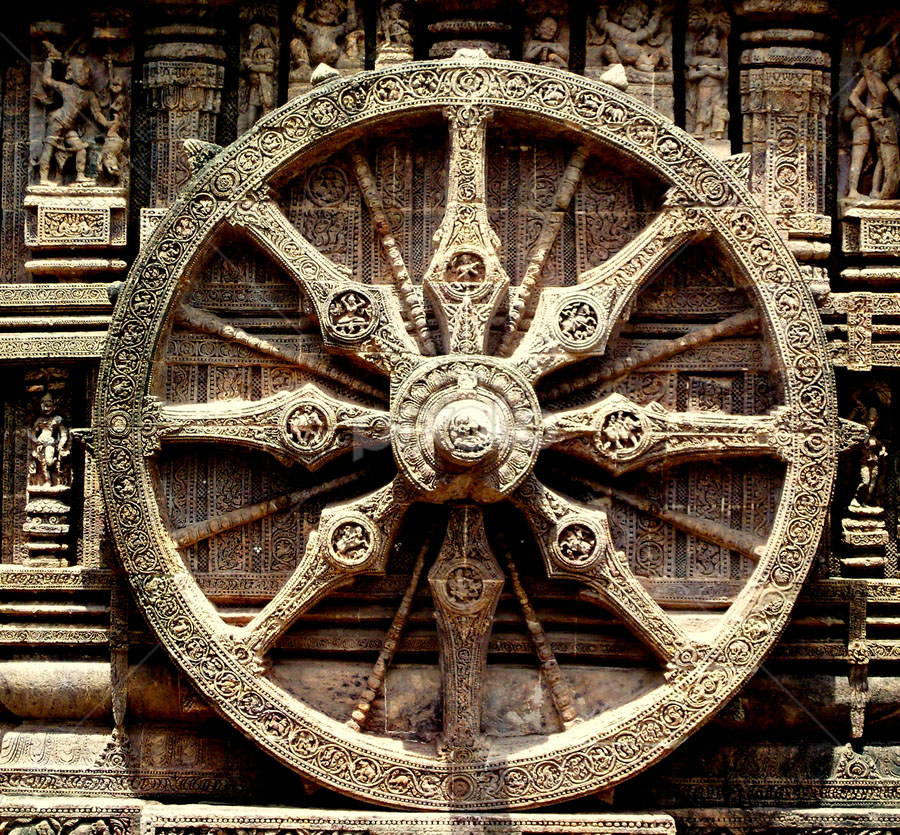 In these challenging uncertain times where last some months were disruptive, there was a complete lock-down due to the Corona pandemic. We all were obliged to stay at our homes, hostel restricting the movement. The dynamic city functions were at halt and nature at that time was restoring its essence, growing in its original state following a cyclic phenomenon. Most of the structures in human macrocosm have recurring presence which tries to attain a balance for its smooth functioning. When the city was resting, the human Chakra was taking a new spiral entering into the ambiguity, trying to find the right momentum in the transformed sphere. Chakra also known as Wheel has a primitive existence and use in human evolution.

Primitively, a wheel is a circular block that rotates on an axis when a moment is applied by gravity or torque. Forming together one of the six simple machines, it is the basis of our day to day transportation, migration and the transformation of the society. It is a part of the larger system, an automobile just as we humans who are an element of the broader ecosystem which will run well if we take responsibility for our wheels. Just how the Bindu (Point) becomes the center of the cosmos, the wheel is the core of the shift for centuries. Made in diverse materials and sizes, its principle has remained the same ever since its creation. Its used in architecture distinctively for building,  technology, transportation, and is also traced for symbolism, utilizing its form as an inspiration to create unique structures. 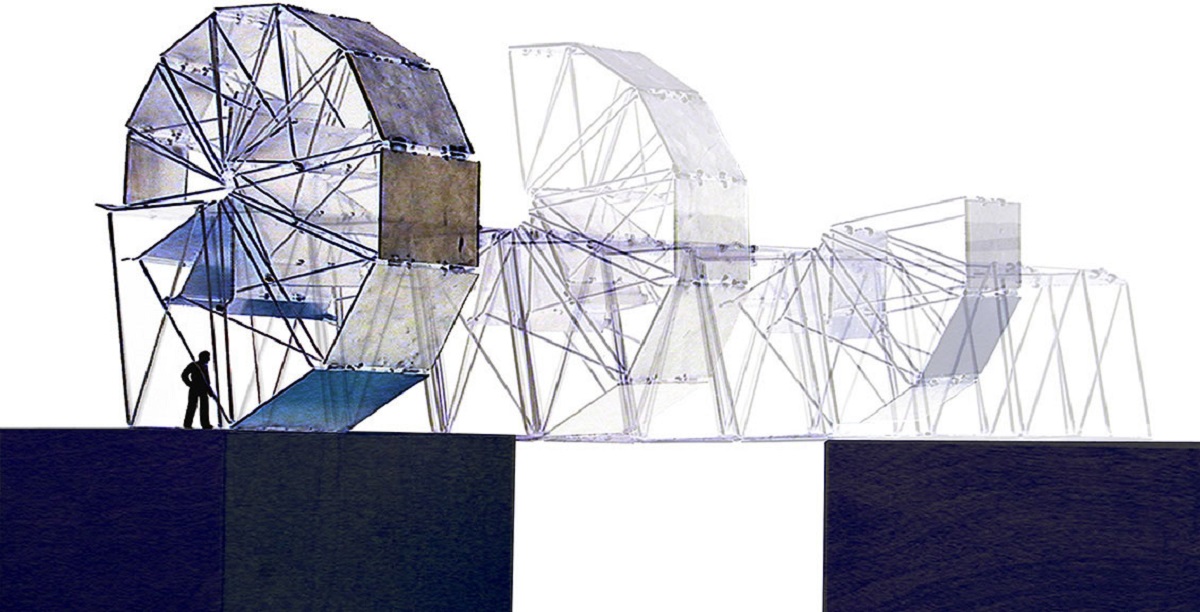 Looking into cities where the entire energy is based on wheels, the basis of evolution and transformation is human activity which is confined and controlled in this pandemic. The architecture wheel that involves various other dynamic structures such as socio - economics, politics, culture, philosophy and vision of the designers has influenced the growth cycle. The laying down of every brick has causal relationship between how people use and perceive spaces in a city. Each element in the urban space has many representatives which becomes the economical way of talking and comparing around the world. In earlier times, the shaping up of urban spaces was contextual, culturally oriented which now is acquiring similar language around the world depleting the identity of its own existence.

Coming back to the wheel, it is one of the objects which are used by almost every single human being on this planet in a form or the other irrespective of their country, income, context and need. Its simplest design has connected boundaries and places lessening the physical distance giving meaning to the formation of a constructed existence of the surrounding. Thinking about architecture, there are always such spaces in the city which becomes the real reality whose use is embraced and appreciated by many beings without any discrimination which is the foundational principle in my philosophy of architecture and urbanism. Bharat Bhawan, a unique example of this can be seen in the City of lakes Bhopal. It is a multi- arts complex, a museum and a place open for all integrating people leaving any prejudice behind. 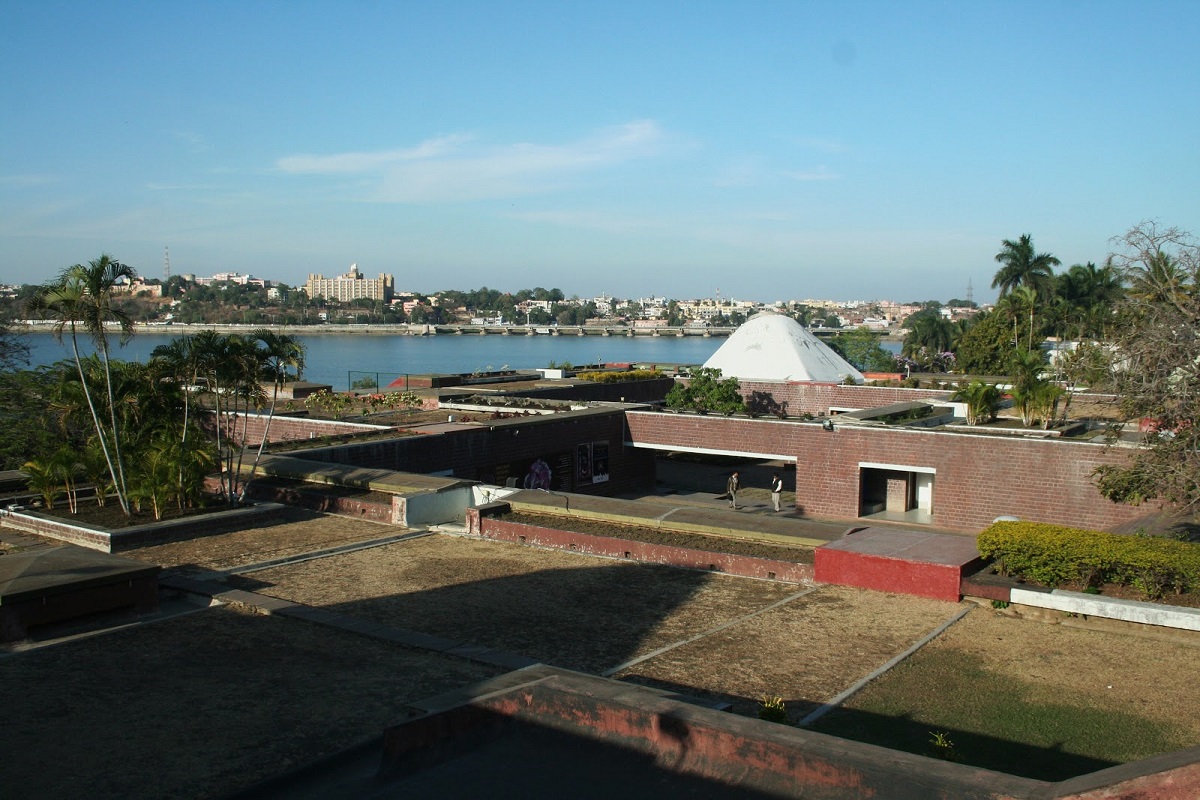 The wheel serves its utility, is a part of every vehicle ranging from a cycle to an airplane adjusting its significance and altering the mechanism effortlessly. It has many elements coming together to perform the function like in vehicular wheel it has a rim, spokes, hub, wire, tyre combining to form different types running on different technologies. It has a rich history dating from civilizations of Mohenjo Daro and Harappa displaying its energy, honesty, life and details. It is lasting and can be repaired with minimum efforts again becoming the basis of its engagement. Whereas the built structures demands regular maintenance, conservation that may include preservation, restoration, reconstruction, and adaptation . Adaptive reuse is a trending concept to perpetuate meaning and use to the existing built mainly used for protecting heritage structures across the world. Below is an example of Neemrana Palace which was restored and adapted into a Heritage hotel, recovering its character, grandeur and existence in the present. 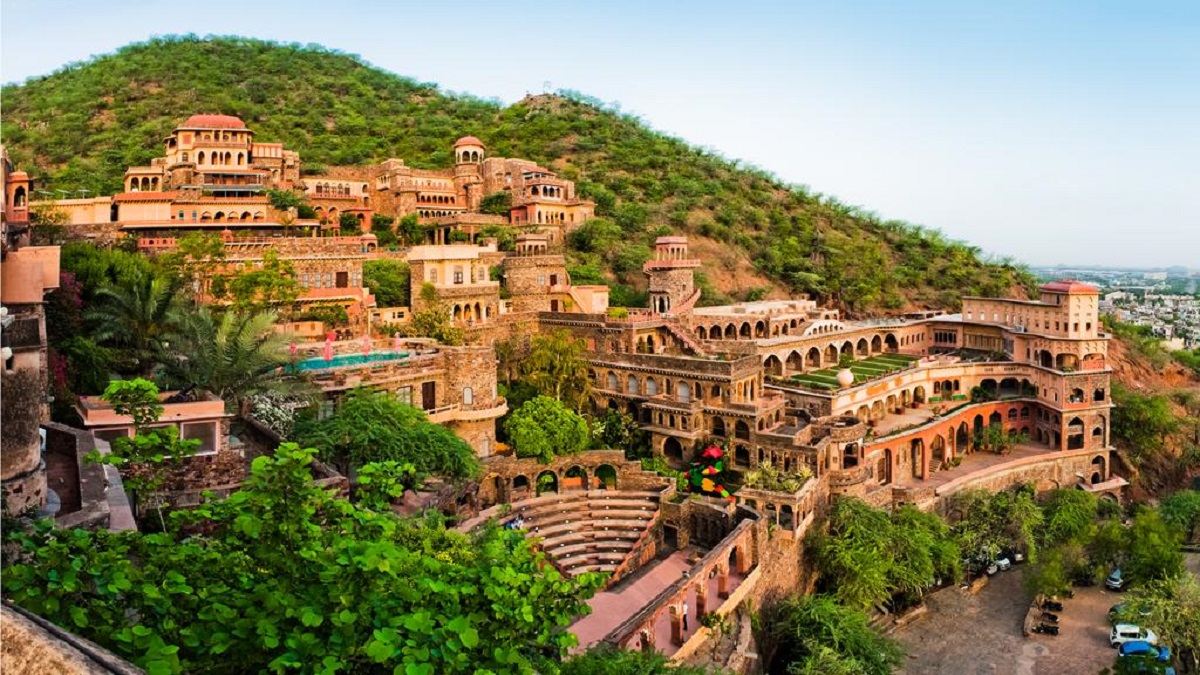 A synonym of restoration for reuse. Image © Neemrana Hotels

Symbolically, the wheel has a strong cultural and spiritual significance in every religion and country. In Buddha's philosophy, the Dharma Chakra is the cycle of life coming from Dharma and is the path of attaining enlightenment, therefore reaching Nirvana. How beautifully, the wheel is used as the metaphor of moving even in the highest state of being. It has an emotion of purity, truth, universality associated with it. The analogy is also carried in the representation of Indian nationality, in the Ashoka Chakra and in the national flag giving identity to masses. Can such be the role of Architecture and spaces which is the basic requirement of every human identity? We can identify some examples in today’s architecture in urban setting evoking emotions and feelings, has truth and significance for human existence.

The basic shape from which the wheel has been derived is a circle, again a simple closed curve that prevails in nature and is diversely used triggering multiple emotions in a being. From prehistoric times, the circle has its manifestation, symbolism and mystical significance being used in the plans of houses, tombs, stupas and religious structures. Presently, the circle is not used widely in the design of buildings, as the circular plan makes it difficult to construct resulting in complications and challenging to fit furniture. Even in the case of furniture design, achieving and finishing curve forms is arduous than using straight line forms. But in ancient Indian heritage circular forms were considered sacred and timeless, Sanchi Stupa, a Buddhist monument is such an example displaying the significance of Chakra and symbolism of enlightenment. 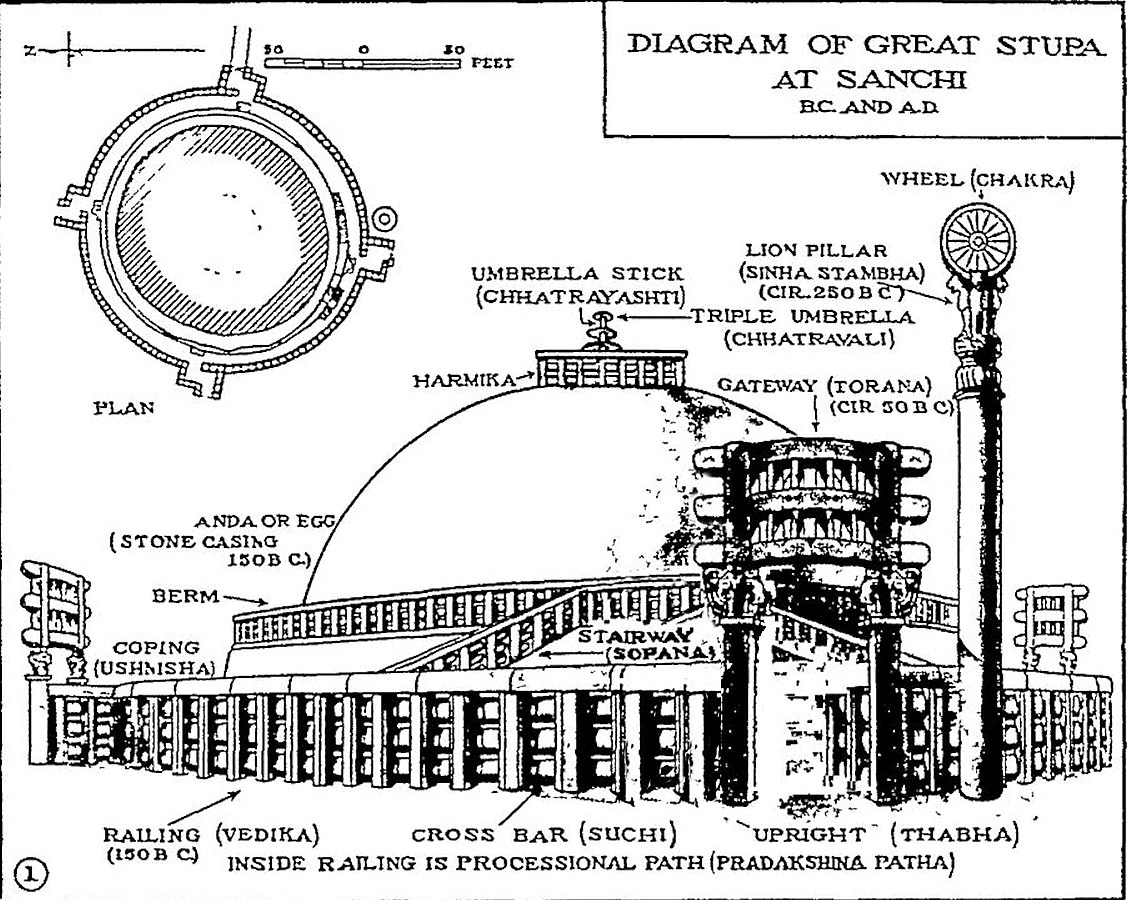 Image © A guide to Sanchi by Sir John Marshall

Any product or building which has its symbolism in nature is linked to human emotions and possess the power to drive for centuries is a successful design. Such is the heritage of the city of Bhopal which sits in the heart of the city and is sustained by diverse visionaries. It has been a part of mixed urbanism and affects a range of people, religion contributing to the heritage timeline of various styles adopted from the classically defined formal architecture. This formality makes informal flow enabling people, life and activities in nature.  Analyzing the philosophy of human activity that has made movement and development possible, the type and trend in architecture has momentously changed in a period of every decade. Below is the image of Shaukat Mahal which blends in the transformation of the city, built in Indo - Islamic and European style it marks the connection to its past, the use of it has relevance in the present too. 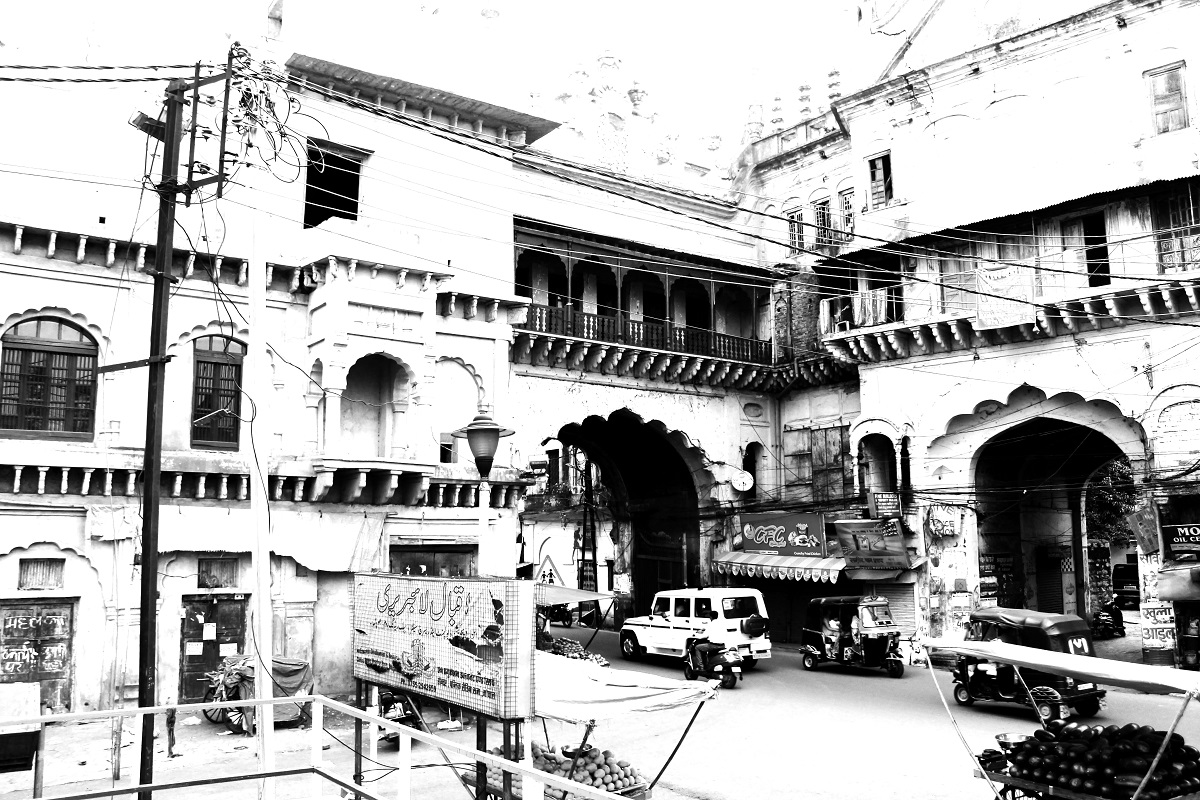 Shaukat Mahal in the heart of urban fabric of the city. Image © Rashi Jain

We humans enter the wheel of human life on the day we are born, finding a purpose to be in it and repeating the cycle of birth, rebirth to maintain the setting of the universe. Also, when now the wheel in materialist creation is resting, the wheel of life is running, taking turns unsteadily rushing towards the uncertainty of the future.